The ghost tree as seen from the Pfluger Bridge. Photo by Rachel Marino

Austin’s visual and performing arts organization, Women and their Work, is facilitating a temporary art installation called THIRST in the form of a ghost tree hovering above Lady Bird Lake’s waters and 14,000 prayer flags strung nearby. In an ironic turn of events, rain came pouring down and knocked out the lights set to illuminate the art installation that memorializes Texas trees lost to the 2011 drought.

The THIRST team jokes that their prays for more rain were answered.

THIRST will be displayed Sept. 29-Dec. 16. Women and their Work find that the project is focusing attention on the drought in a visually powerful way. In a press release, they describe how the project sheds light on the centrality of water to life and how it will encourage discussion about water. While focusing attention on the need to engage in conservation and preservation, THIRST will also memorialize the loss of over 300 million trees that died in Texas in the drought of 2011, the worst one-year drought ever recorded in Texas history.

A cedar tree, already a victim of the drought, was painted ghostly white with environmentally friendly DuraSoy Bio-Based paint and rigged to appear to float above the lake. The tree they used for the project came from private property and was set to be buried in a landfill.

The white prayer flags were silk screened with an image of a tree and hung in a 2.5-mile loop from Lamar Bridge to the First Street Bridge as well as along the popular Pfluger Pedestrian Bridge. The THIRST team inspects the flags daily to make sure everything is intact, and checks up on the tree by boat once a week.

This ghost tree not only serves as a reminder of those lost but is a way to productively use a dead tree. “[The tree] is a metaphor for the problem we are facing; a metaphor for this crisis,” said Chris Cowden, Executive Director for Women and their Work.

“So what’s the fate of these trees? The vast majority are going to stand out there — until they eventually fall to the ground,” Texas A&M Forest Service Analyst Chris Edgar said of the drought affected trees.

Edgar estimated that an existing 272 million standing dead trees already littered the landscape before the drought and that number has doubled now, which produces both positive and negative effects.

Click points below for a look at THIRST around Town Lake:

The ghost tree is reminiscent of the “ghost bikes” seen around the country. They’re painted white, just like the tree, and they commemorate people who have passed similar to how the tree commemorates dead trees. Women and their Work had never put those two together until later; it didn’t affect their creative process at all, but they did realize that it had similarities after the project was already under way, according to Cowden. 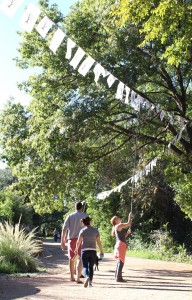 To discourage boarding near the site, four 18-inch diameter orange corner buoys were set at the tree perimeter. Swimming line markers with 5 inches by 9 inches buoys at five-foot centers were set between each of the four corners, creating a 60-foot square around the tree.

The power for the lighting at night was supplied from the adjacent Pfluger Pedestrian Bridge provided by Austin Energy.

Debris from the recent rainstorms beat the armature and ruined the ghost tree’s lighting during recent flooding of Lady Bird Lake. “We had to get new lights, and then it was just a matter of removing the debris, re-welding the steel that held the lights and then installing the lights,” said Connie Arismendi, one of the lighting designer from the Arismendi Garanzuay Studio who helped bring light to the tree.

Cowden hopes people realize that while this recent flooding was reason to celebrate, the lake levels are nowhere back to normal.

“People thought, ‘Oh hey there was a flood, that must be enough water to take care of the drought problem,’” Cowden said. “Actually, it only added about one inch to Burnet and one foot to Lake Travis, so we’d need at least eight to 10 more of those floods to get water levels back up to anywhere near normal.”

The drought is far from solved; Lake Travis is still 50 feet below normal. The Texas Water Development is working hard to spread this message.

“Our two biggest water supplies here in Austin are Lake Travis and Lake Buchanan. As of now, Travis is 32.7 percent full and Buchanan is 37.9 percent full. Just last year, Lake Travis was at 40.1 percent, so you can see how quickly the water levels are dropping,” said Merry Klonower, an official from the Texas Water Development Board. 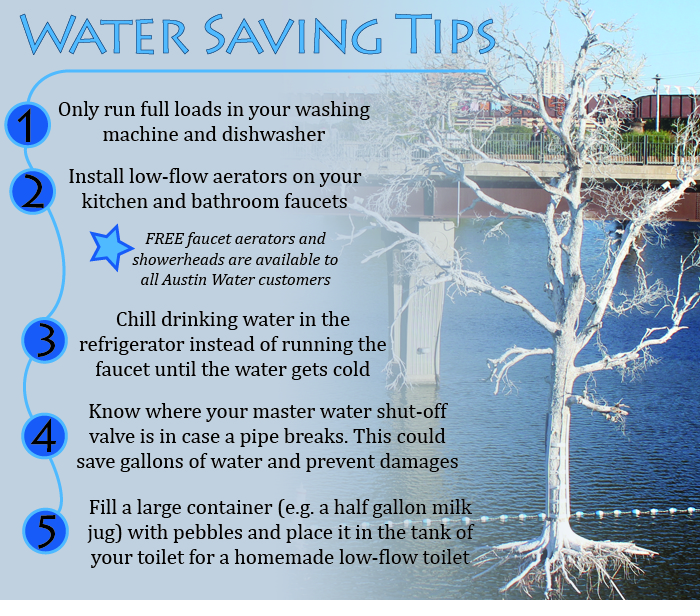 According to the National Drought Monitor, over 80 percent of Texas is in drought. The drought started in west Texas and spread in 2011, and most of the state hasn’t recovered since then.

“The drought produced traumatic results, especially for individual landowners. But the good news is the forest is resilient. When a dead tree falls over, a young, new tree eventually will grow back in its place,” said Burl Carraway, the department head for the Texas A&M Forest Service Sustainable Forestry department. “Tree death is a natural forest process. We just had a lot more last year than previous years.” 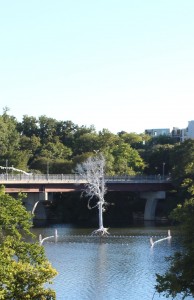 The ghost tree as seen from the Lamar St. Bridge. Photo by Rachel Marino

Funding for the THIRST project was supported in large part by the Robert Rauschenberg Foundation, which gave $50,000 t0 the project as part of the Artistic Innovation and Collaboration Grant that “supports fearless and innovative collaborations in the spirit of Robert Rauschenberg,” according to the foundation’s website. The rest of the funds came from independent donations from citizens, including many anonymous donations.

“We’re estimating that the project will end up costing over $100,000, including repairs,” Cowden said. “We had no cost estimates going into the project because nothing like this has ever been done before.”

No City of Austin funds were used by the project, according to Melissa Alvarado from the City of Austin Economic Development Department. “Because the art installation is on City-owned property, Women and Their Work were required to temporarily loan the artwork to the City, per the City’s Artwork Donation & Loan policy,” Alvarado said.

The whole purpose of the THIRST art installation was to get people talking about solving the problem of the drought, according to Cowden, and it has definitely sparked conversation about the drought.

“The Dean of New York University loved it; he asked us to send him a flag. The Huffington Post has also mentioned us,” Cowden said. “Women and their Work has been around for 35 years now, and this has been a monumental project for us.” 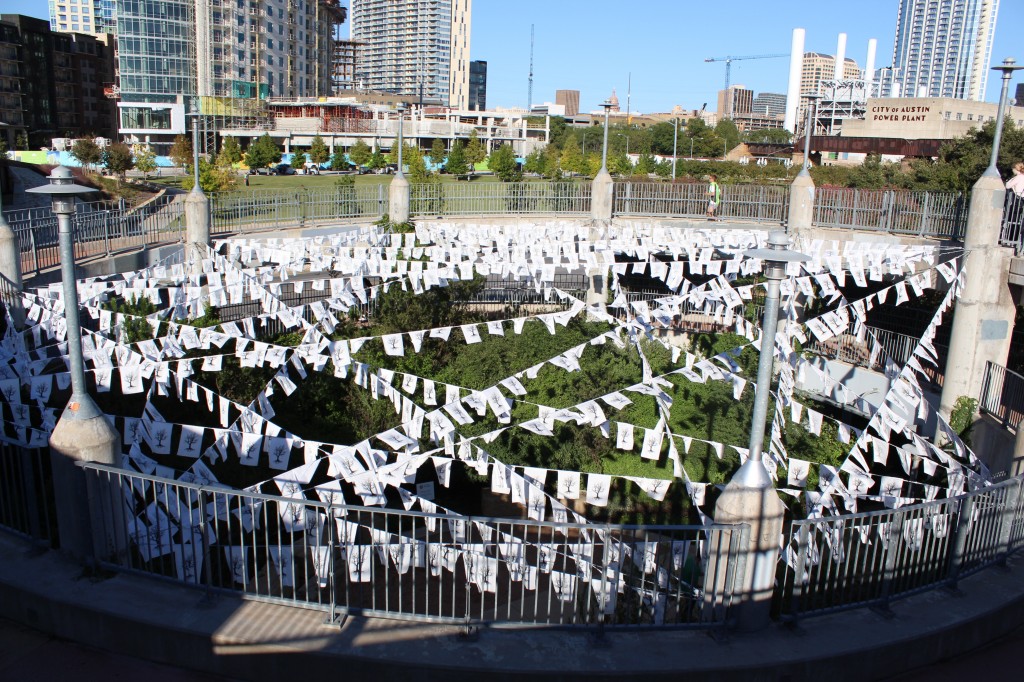 The pray flags at the Pfluger Circle. Photo by Rachel Marino