Students and faculty gathered outside of the Moody College of Communication on Nov. 7 to celebrate the $50 million donation granted by the Moody Foundation. This donation — the largest one ever to be received by the college — will further the college’s national leader status, university officials said. 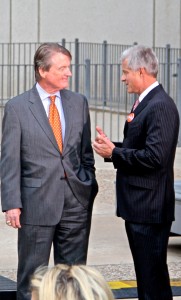 UT President William Powers Jr. spoke about how big of an impact the donation will make on future Texas students.

“This is going to be a gift that will transform how we do research, how we teach,” Powers said. “It will benefit students for years and years to come.”

The foundation, founded in Galveston in 1866, was “created for the perpetual benefit of present and future generations of Texans by William Lewis Moody, Jr. and his wife, Libbie Sheran Moody.” Some of its largest grants include the Moody Gardens in Galveston ($300 million), the Transitional Learning Center in Galveston, ($38.1 million), the Galveston Municipal Golf Course, which is a part of the Moody Gardens and currently undergoing a $17 million renovation, and now the Moody College of Communication at UT Austin. After introducing members of the Moody family present at the ceremony, one of which is a freshman at the University, Powers handed off the microphone to Moody Foundation Trustee and also UT alumnus, Ross Moody, who explained the reasoning behind the grant. 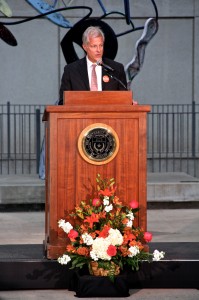 Ross Moody, one of the Moody Foundation trustees, spoke mainly about their decision behind the generous donation.

“With a family with a history of dyslexia, the vision and mission of the department of communication sciences and disorders, to understand and treat the challenges of both the young and old with speech, hearing, and language impairments, and to develop new methodologies to broaden the minds ability to formulate, absorb, and express ideas was key in our decision to support the college,” Moody said. “Also, I’ve learned that 26 Pulitzer Prizes have been awarded to graduates and faculty of the college of communication. All of those Pulitzer Prize winners inspire today’s students – the ones you described in your speech Dean Hart – to pursue journalism.”

According to a university press release, the donation will provide “$13 million for graduate student recruitment, $10 million for research and outreach centers and $5 million in department endowments. It will also provide $10 million to establish an ‘idea fund,’ which Roderick Hart, dean of the college, said will act as venture capital for ideas in departmental development.” 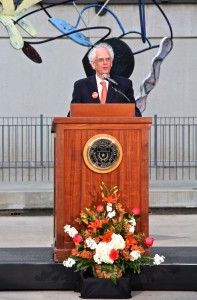 Moody College of Communication Dean, Roderick Hart, began the ceremony by giving a bit of background history of the foundation. He said, “The Moodys specialized in oil and cotton, as well as ranching banking and insurance…but today these two great institutions come together for the best of reasons: to help educate the young people of Texas among the exciting and sometimes bewildering world of modern communication technology.” 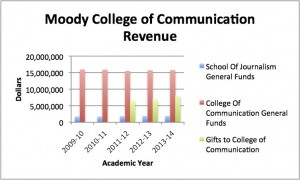 Source: The University of Texas at Austin Budget Office 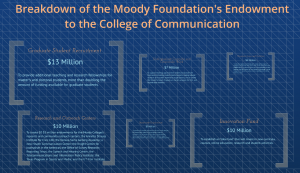 The School of Journalism is increasingly reliant on donations as funds from the state decrease, said Glenn Frankel, the school’s director. He said the donation would be used to foster innovative programs and techniques invented by faculty and students — something the school needs to ensure it produces students who are entering a changing media marketplace.

“I think this is the most exciting and innovative and challenging time to become a journalist,” Frankel said. “I think if you’re young and you’re not afraid of technology and you’re adventurous, you have the opportunity to help recreate journalism. Journalism isn’t going away.”

Some of those innovations will require students to acquire skills that are increasingly needed in a market that values web-based content and skills. UT journalism professor Robert Quigley — who teaches a class focusing on social media’s role in journalism — said students will need to be able to invent new storytelling techniques, not just existing tools.

“The journalism school is just as important now as it’s ever been, if not more important,” Quigley said. “Because, we’re not just teaching kids a simple skill that they need to learn to go get a job at the low end at a newspaper. We’re teaching them how to invent the future of communications.” 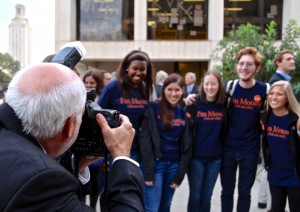 Students of the class of 2013-14 gather around for a photo – some of the first to graduate from the Moody College of Communication. 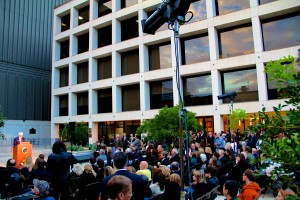 The ceremony took place on the Walker Cronkite Plaza, outside of the newly renamed college. 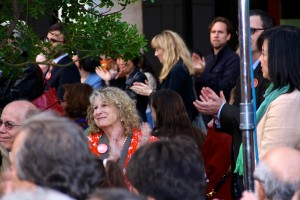 Wanda Garner Cash, associate director of the School of Journalism, is thrilled to be at the Moody donation ceremony. 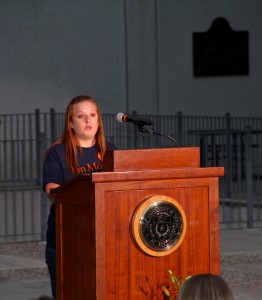 Ashley Bigham, Communication Council President and public relations senior, spoke on behalf of all communication students. She said, “As students, we have put our sweat and tears into this school. We have put our best efforts into our tests, our projects, and other challenges that we have been faced with…We already go to one of the best communication schools in the world – in fact, we are number two in the world – but now we have the privilege of saying that we attend the Moody College of Communication.” 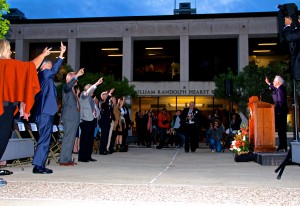 The ceremony ended with Dean Roderick Hart asking the crowd to join him in singing the Eyes of Texas.

← Texas Tailgating Traditions
Behind the Scenes: How The College of Communication Became Moody →