Through droughts and flooding, Mother Nature has had her share of fun with Austin over the past months. Although Lake Travis water levels are on the rise with recent rains, the drought that has claimed plenty of businesses, affected Austin farming and lowered property values all around still keeps the city from staying afloat.

The Lower Colorado River Authority‘s worries have only increased since the drought began taking a serious impact on the region three years ago, and according to Public Information Officer Clara Tuma, the recent rains haven’t changed the unfortunate situation much.

“Don’t be fooled by the green lawns in Austin, the drought continues,” Tuma said. “This isn’t the worst we have seen, but without more rain, it could very well become the worst.” 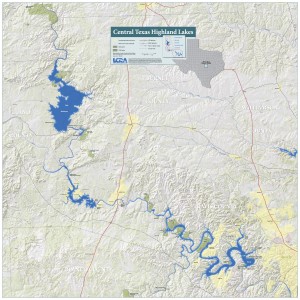 The rain came in downstream of the Highland Lakes and made its way to the Colorado River, which flows down to Matagorda Bay and on to the Gulf of Mexico. However, the rain did not fall upstream enough to reach the Central Texas reservoirs of Lakes Travis and Buchanan.

At the November board meeting, the LCRA requested the state to approve emergency plans to stop sending water downstream to rice farmers in the coming year if reservoir lakes are less than 55 percent capacity by the beginning of March. The Texas Commission on Environmental Quality, LCRA’s regulator which approves how water from Lake Travis and Buchannan is used, will meet in December to make a final decision on the future of water distribution.

However, recent rains, totaling 13.28 inches, have provided some aid to local farmers.

Robert Mace, who serves as the deputy executive administrator of water science and conservation at TCEQ, said as bad as it has gotten, having experienced a situation even worse has allowed authorities to have a better understanding of their options.

“What Texas learned from the 1950s drought was that we don’t have enough water to meet the needs,” Mace said. “To tell you how bad it was, they restricted irrigating on the football field for the cotton bowl. You know things are bad when Texans aren’t watering the football field.”

“Lake level has affected restaurants in the lake area, most restaurants are going to be down a significant percentage higher than we are,” Assistant manager Jacob Silva said. “You can definitely see an impact in foot traffic here, but we are hanging tough because of our 30 year reputation.”

Over time The Oasis was even able to see the drought as a marketing tool with its “Come see the new island at Lake Travis!” advertisements.

Rick Redmond, owner and CEO of Volente Beach, said he believes their location at the deepest part of the lake has helped keep their business up. People were able to physically get to their “boutique water park” over other businesses.

“What we started realizing was that a lot of our competition was closing,” Redmond said. “Since there are fewer places to go, and we’ve stayed open, customers have been coming to us.”

While revenue from businesses and some rainfall are keeping business and agriculture alive, property values and low-lake levels have been driving more residents to put their “For Sale” signs up.

Trudi Smith, who owned a home by the lake for four years, said there were many reasons as to why she moved away from the lake, but the final push to move was due to the lack of incentive to stay lakeside.

“It wasn’t the pleasure it used to be,” Smith said. “You couldn’t get on the water. A lot of people I met ended up moving away, and after a while, there is simply no benefit to living by the lake with water levels so low.”

While Smith said she believes it is just a course of nature, and eventually the water will come up, the TCEQ has been urging people to continue to conserve water in any way possible. Tuma and the LCRA echo Redman’s sentiments, and said little things such as low-flow shower heads and toilets can save a few gallons at home but thousands if the whole community participates.

“Each one of us can conserve water, just as much as the city or industry or even farmer can,” Mace said. “Every little bit helps.”

The following drought monitor is continuously updated to reflect the drought’s current status.

← Behind the Scenes: How The College of Communication Became Moody
Art From the Streets: Bringing Hope to the Homeless →