Behind the Scenes: How The College of Communication Became Moody 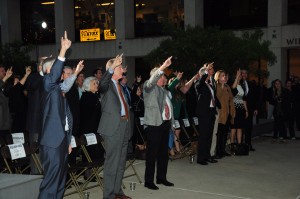 The Moody Foundation, began by W.L. Moody Jr. in 1942, was created to benefit the success of present and future generations of Texans. Known for their philanthropic work, including funding public higher education around the state, the foundation originally granted UT’s RTF program $2.1 million dollars for curriculum in 3D film production earlier in the year. Dean of the College Communications Roderick Hart decided to build on this initial investment.

“They have historically supported programs that deal with brain injuries, such as hearing and speech communication, so we developed a relationship with them, which ultimately led to the $50 million gift,” said Hart. “We put together a 50 page single space proposal that laid out all of the details of what the money would be for and how would we use it.”

“Extraordinary work is taking place at this college, it was an easy decision to invest in the college and it’s academic programs,” Ross Moody, Moody Foundation trustee and UT graduate, told the attendees of the celebration.

According to Dean Hart, one thing that attracted The Moody Foundation was that most of the money gifted would be used as endowments. 95 percent of the $50 million will be put in the bank as principal. They will later use the interest generated from the principal, making the donation a long-term investment.

According to Mike Wilson, Assistant Dean for External Relations in the College of Communication, the gift by in large will be centered around an innovation fund. He believes one of the key issues surrounding the college is the rapid pace of technological change.

“We need to be ahead of the curve and be able to teach things that are relevant to a changing market place in both the industries we serve and the way in which consumers want to receive information,” Wilson said.

The innovation fund is designed to create curriculum, lectures, and programs that are able to keep students prepared for the jobs of the future.

Why Are YOU Moody?

“The Moody Foundation believes it’s commitment to this college will inspire students to achieve extraordinary heights in their own careers and to reflect well upon this university,” Ross Moody said. “It is vital for the university to prepare students for the shifting media landscape revolutionary technology and new forms of communication.”

Money from the endowment will also go to the nine centers within the college. According to Dean Wilson, each center will be given a $1 million endowment. 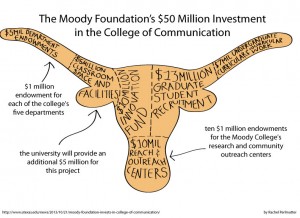 “Most of our income comes from donations and grants because state is limited and hard to get,” said Regina Lawrence, Director of The Strauss Institute. “The money we will get from the endowment is valuable. We can count on on it year to year and it will help fund our array of educational programming along with the research we do.”

Another center receiving part of the endowment is the Knight Center, an outreach program that helps journalists in Latin America and creates online courses benefiting journalists all over the world.

“Although there is no immediate cash flow, the endowment will grow and we will be able to spend half of that revenue every year,” said Knight Center Director and UT professor Rosental Alves. “It will help our center to become permanent and allow us to receive more donations.” 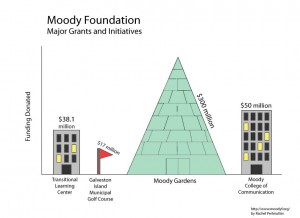 Though most of the money is going towards student and faculty, $10 million dollars of the Moody donation will be allocated to build a sky bridge that will stretch over Dean Keeton Street and connect the Belo Media Center to the CMA building. According to Dean Hart, there is a big safety concern with students crossing Dean Keeton Street. Hart also felt that the two buildings being split across the street made the college as a whole seem split.

“Along with being aesthetically pleasing, the bridge will connect the buildings not only physically, but psychologically as well,” Dean Hart said.

According to many faculty and staff, the best part of the $50 million endowment is the name that comes along with it.

“Being the Moody College of Communications is branding our college with a great name,” Dean Wilson said. “It will join other great Texas names on this campus like McCombs, Jackson, and LBJ.”

Wilson explained that having a well-known name linked with the college gives the school enormous benefits, making it recognized nationally and internationally and attracting new talent and more people to the school.

“We are delighted to give this gift and we are in awe to have the Moody name on this campus,” said Ross Moody. “May the Moody College of Communications teaching and programs continue to inspire a desire for excellence and be a positive influence in all that enter our doors. 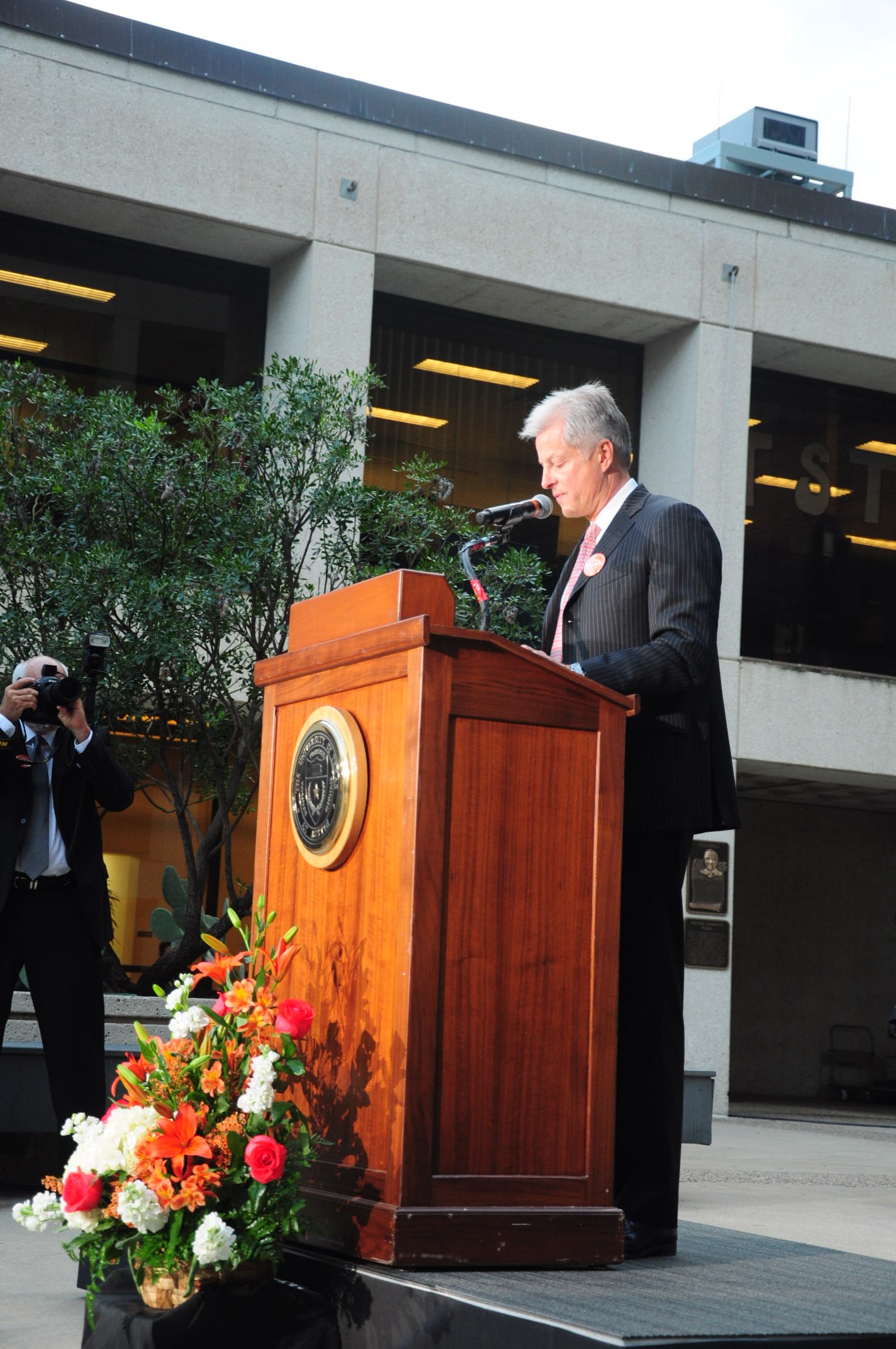 Ross Moody, one of the Moody Foundation trustees, spoke about their decision behind the generous donation. Photo Credits: Monica Zhang 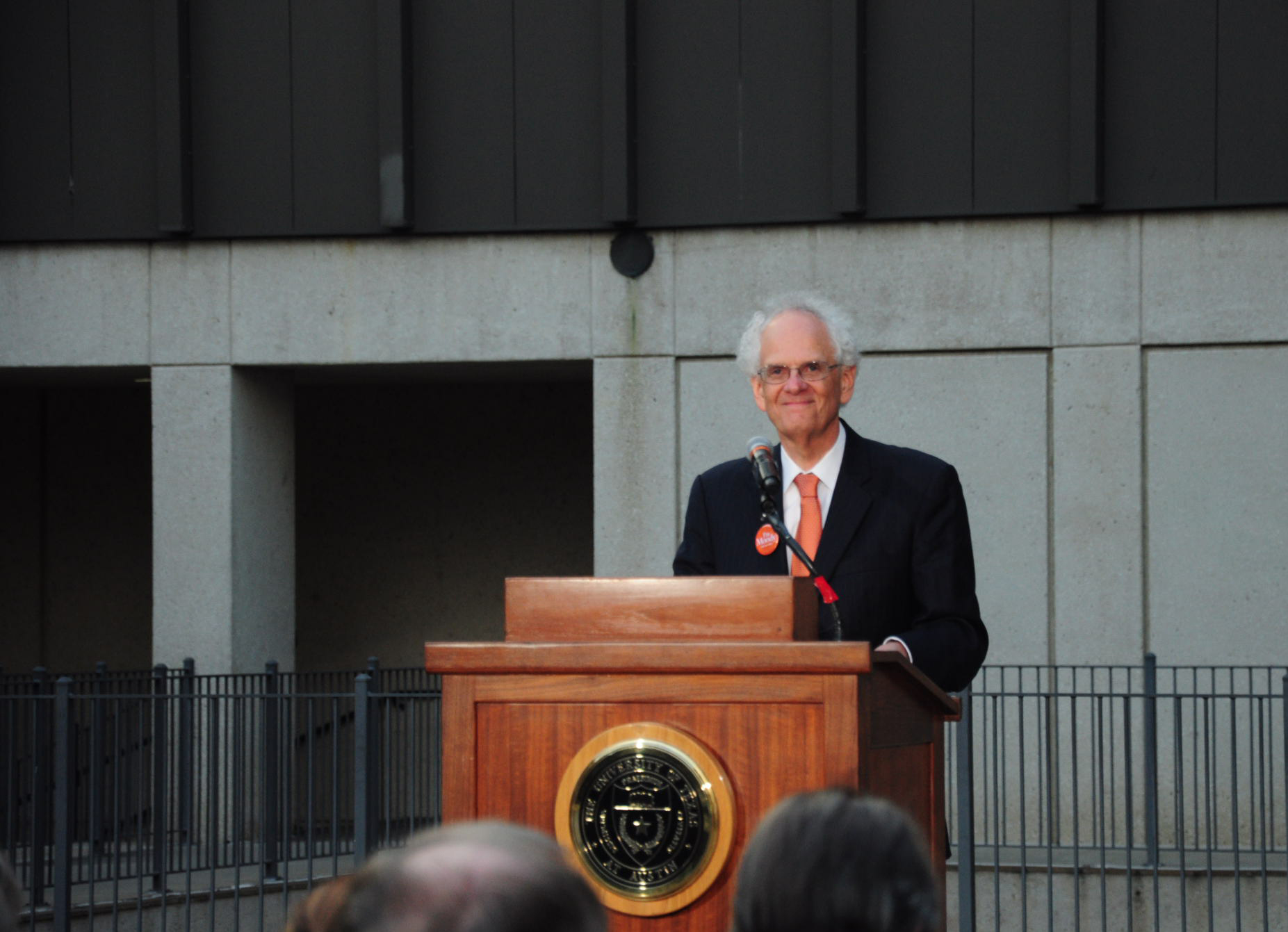 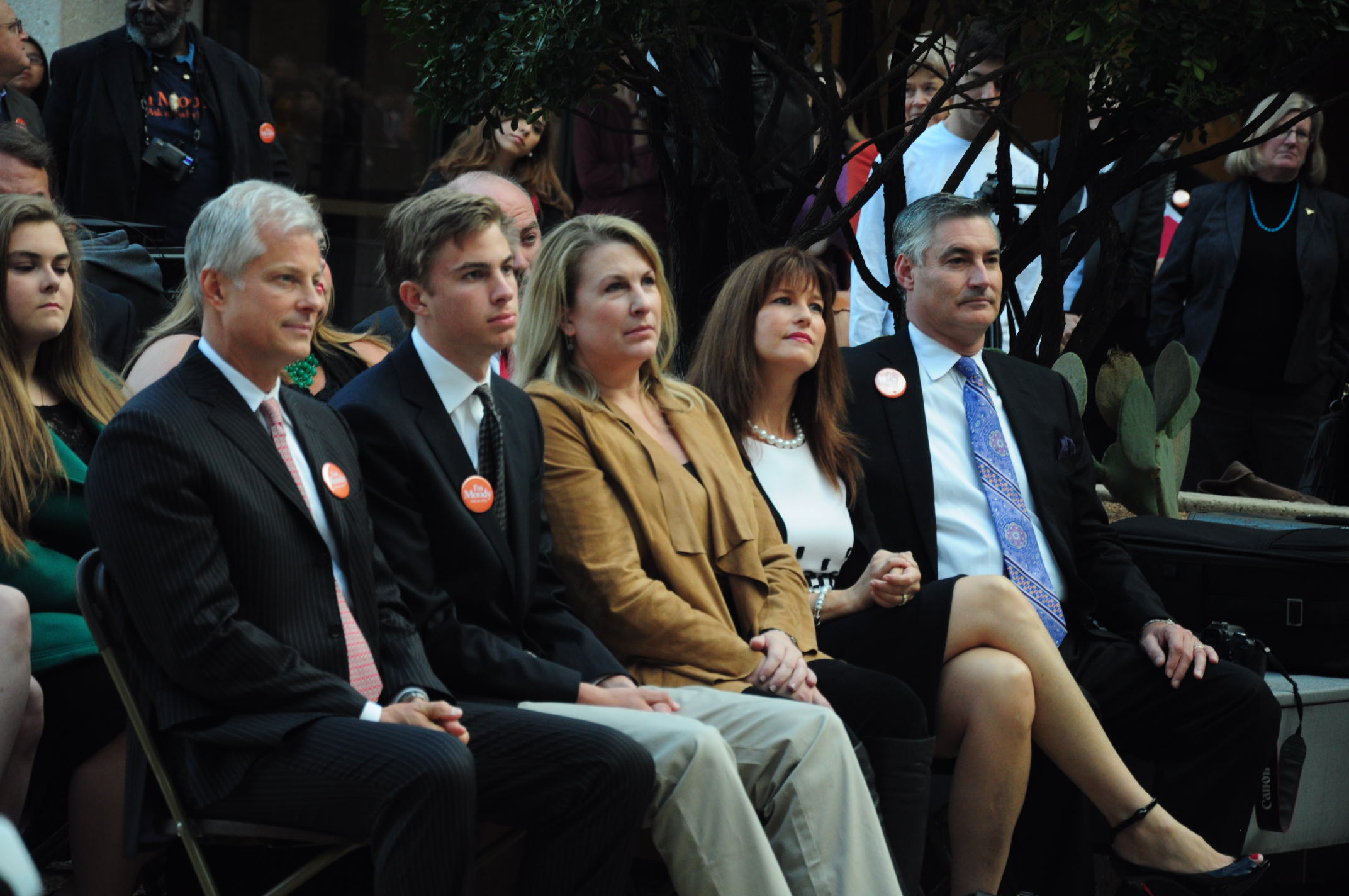 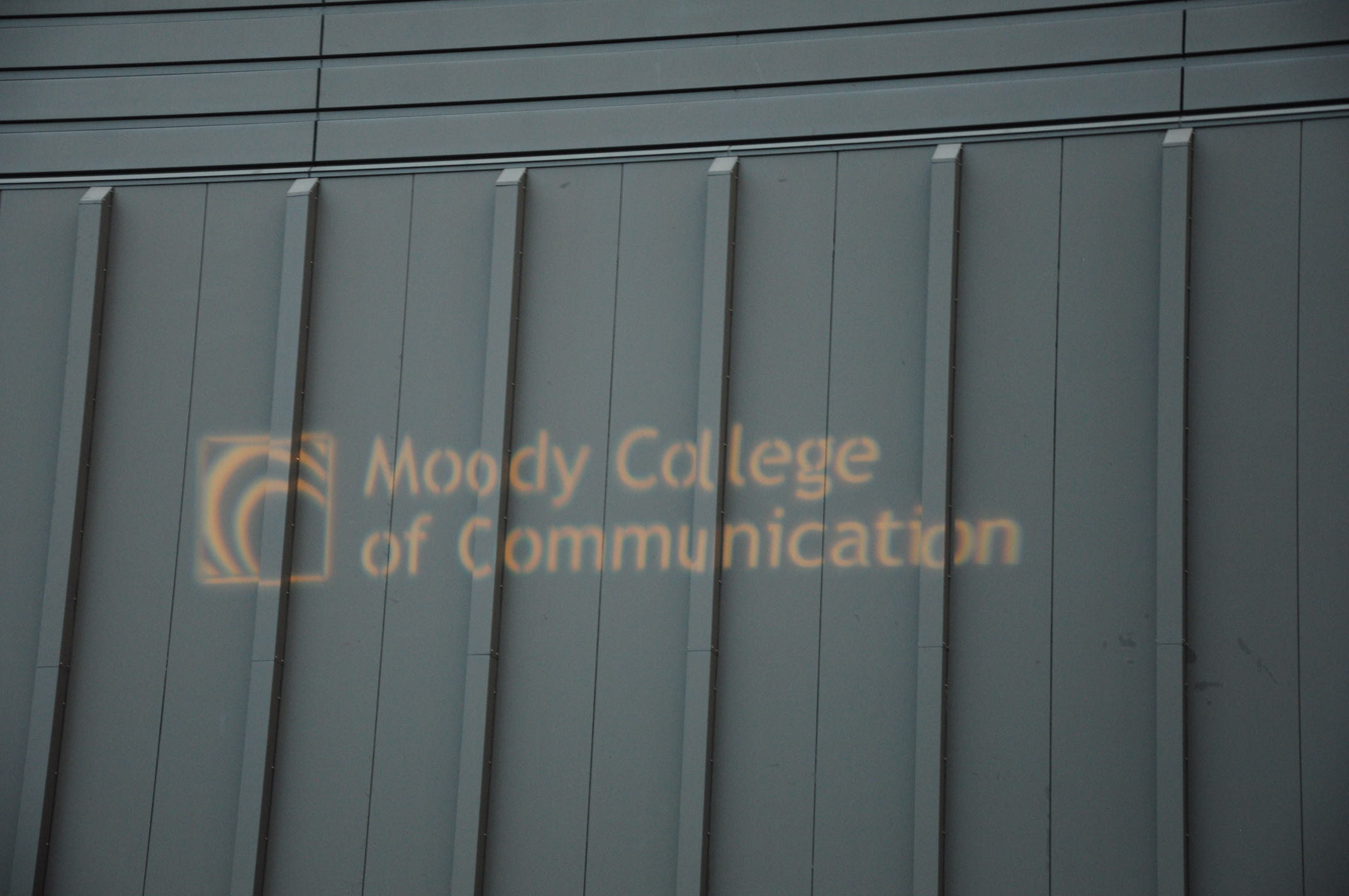 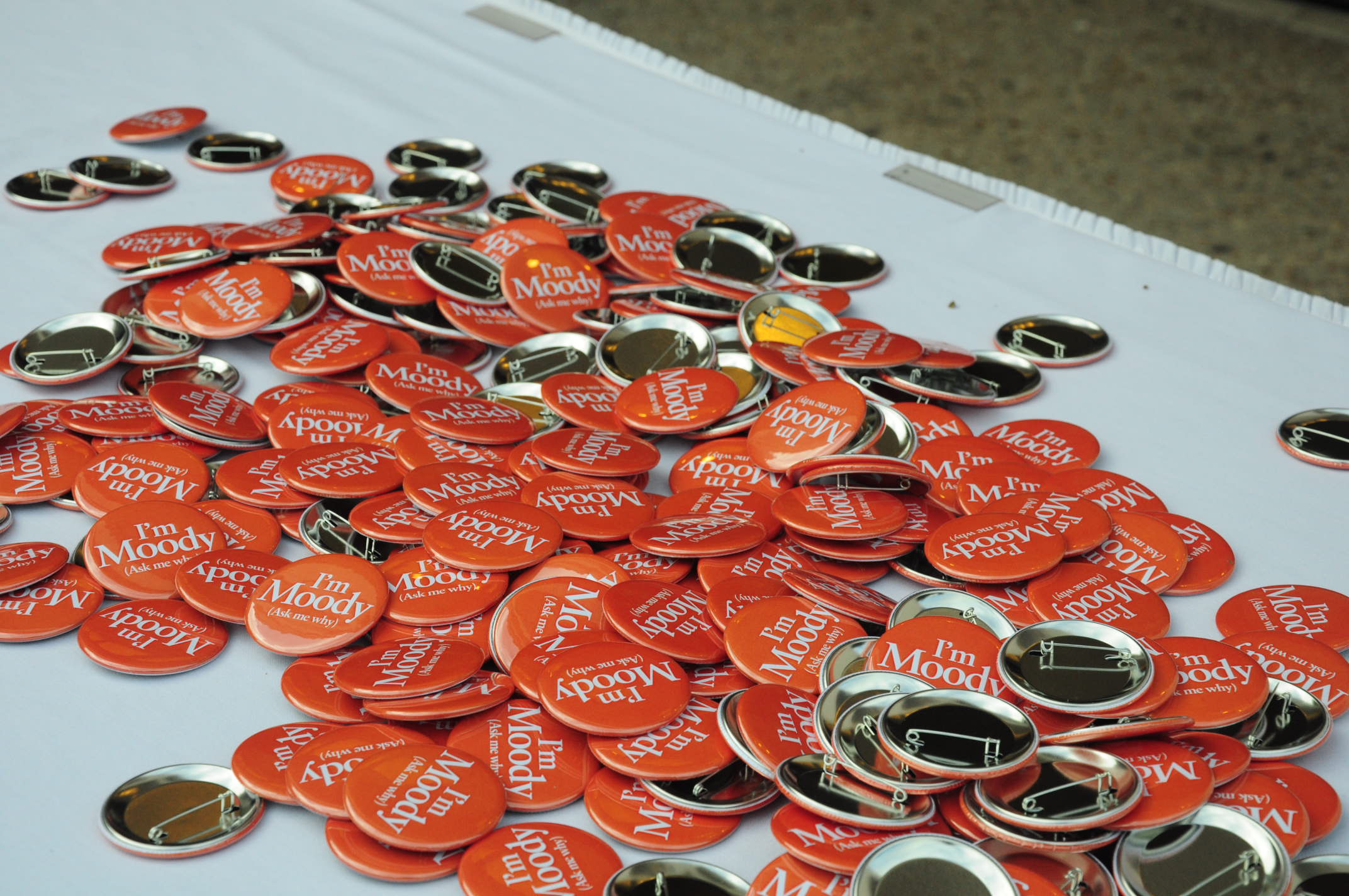 Free "I'm Moody (Ask me why)" buttons sending out the entrance of the event. Photo Credits: Monica Zhang 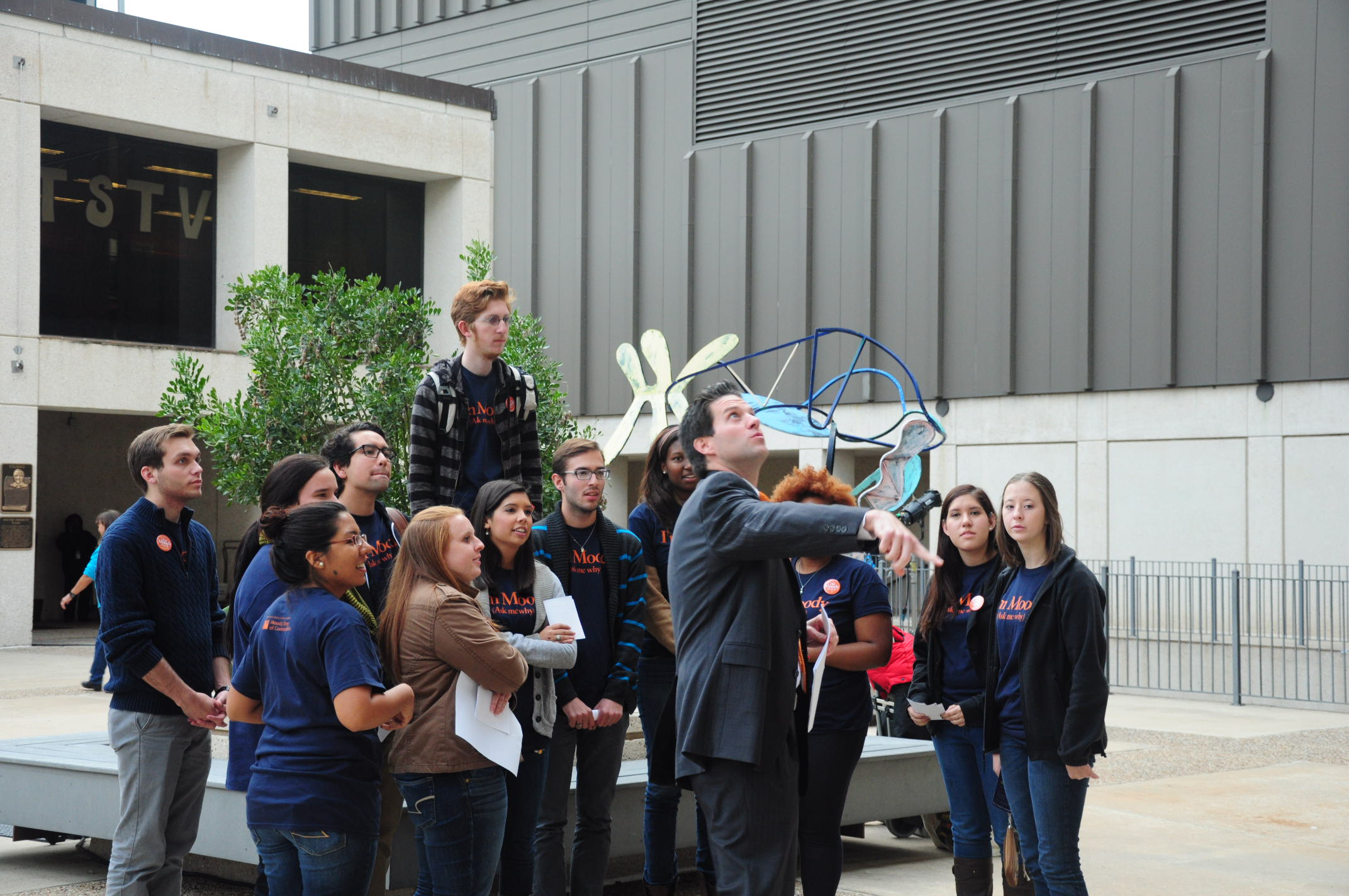 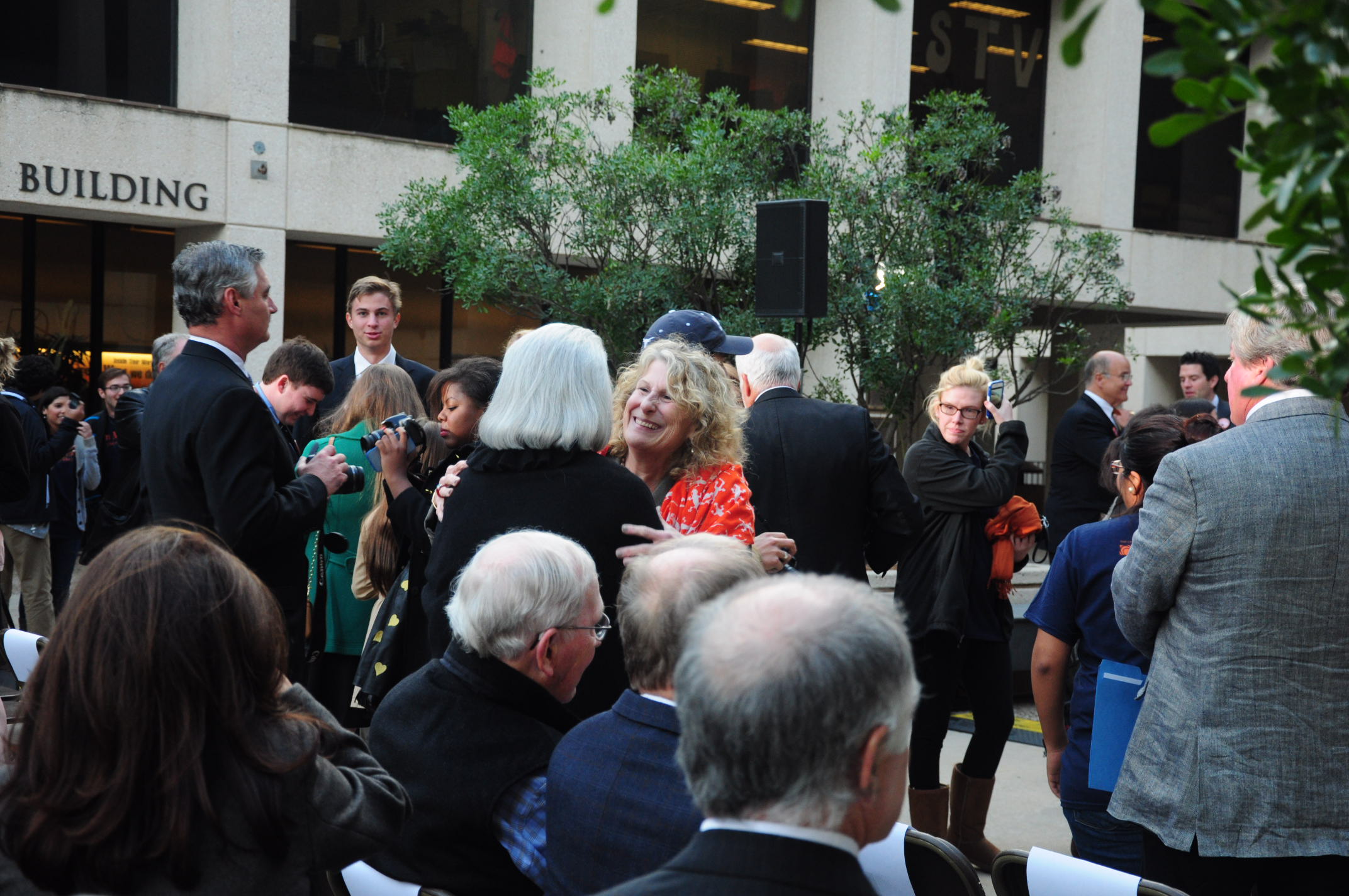 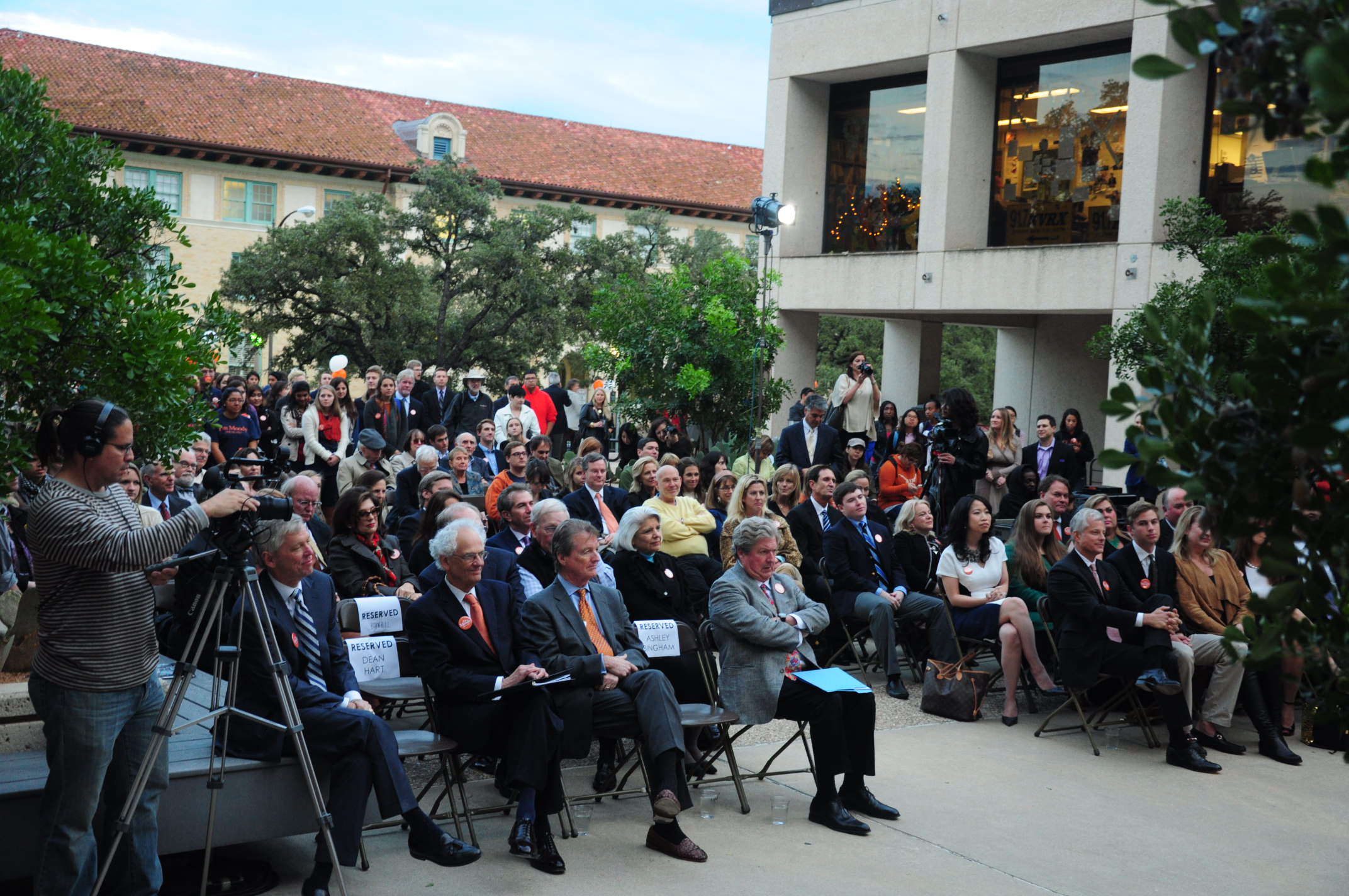 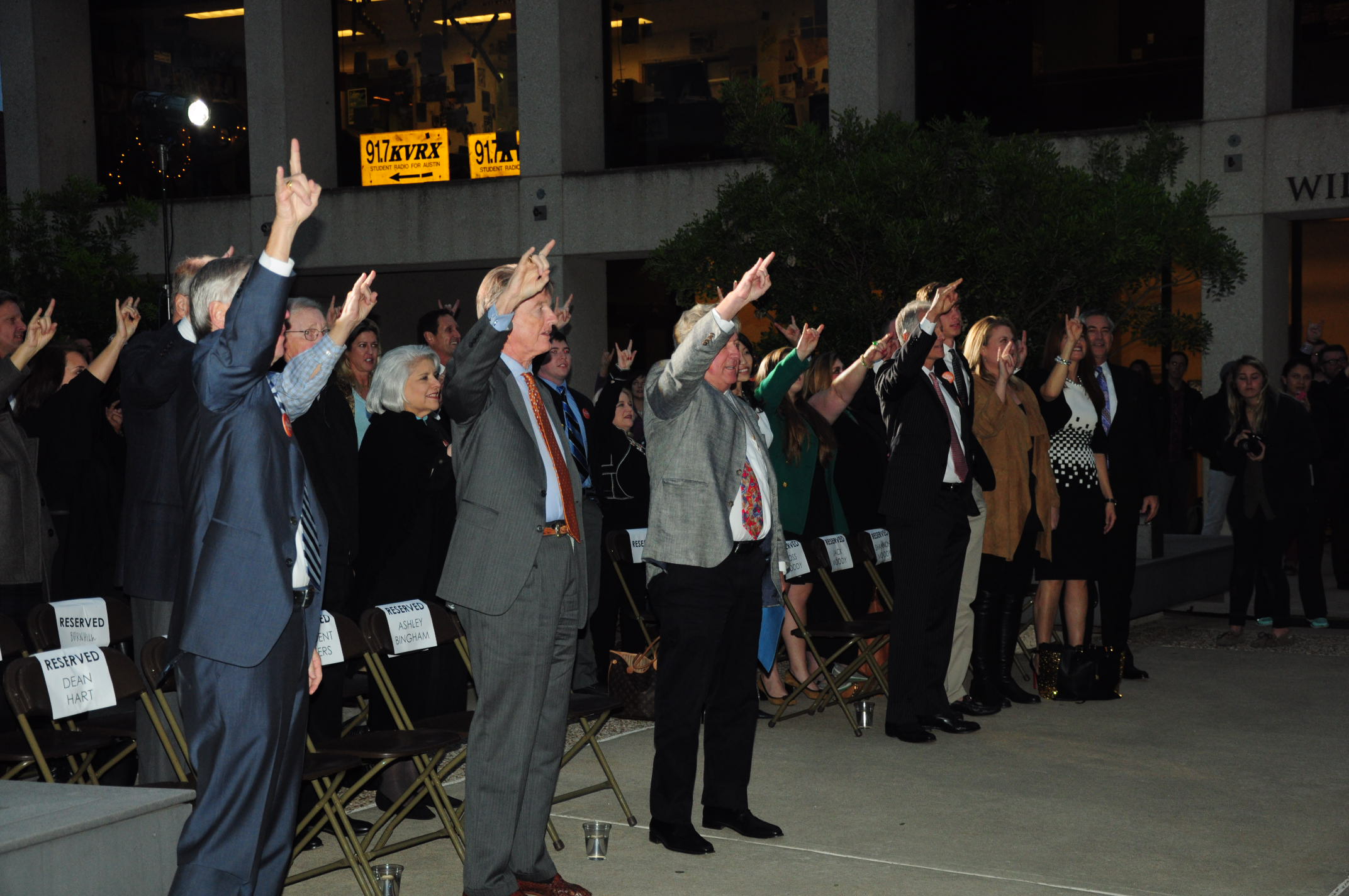 Dean Roderick Hart asking the crowd to join him in singing the Eyes of Texas. Photo Credits: Monica Zhang 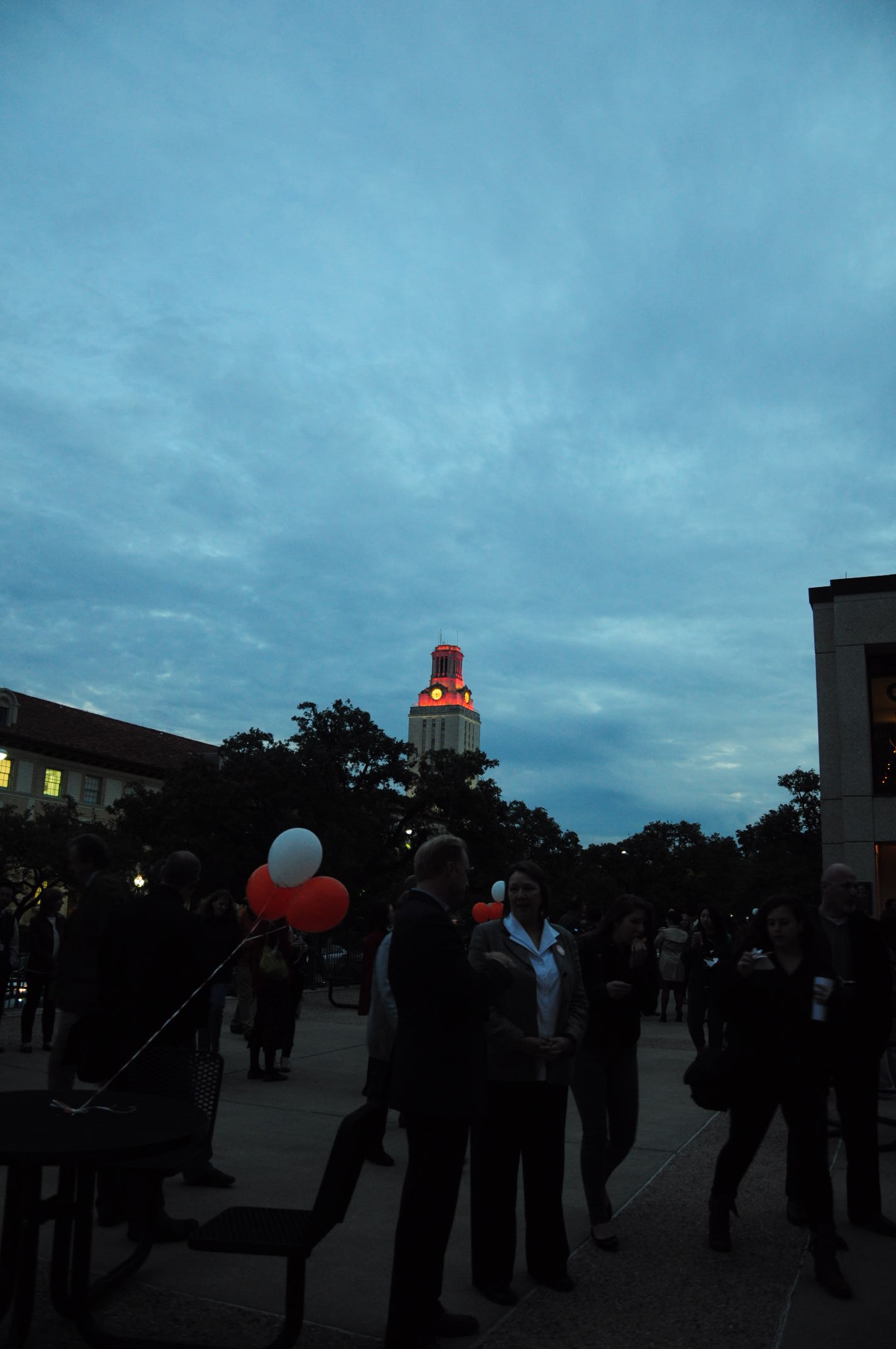 Tower
The tower is getting orange for Moody College. Photo Credits: Monica Zhang