There’s Austin on the Walls 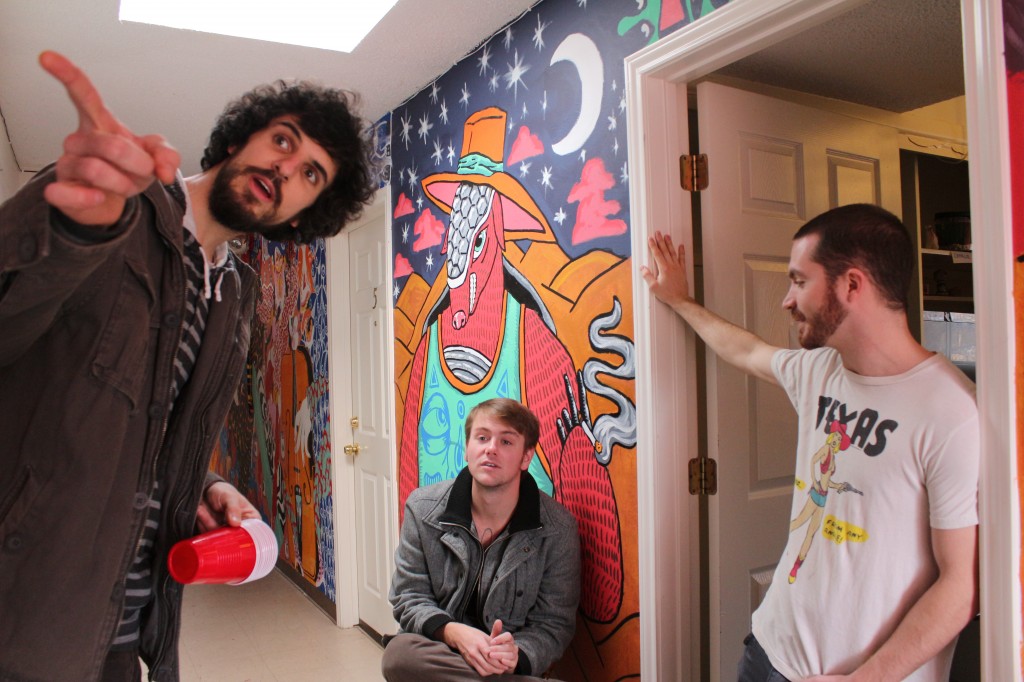 Muralist Stephen Ferguson points toward his painting, which hangs in the dining area of Drifter Jack’s Hostel, to owner Andy Ward and fellow artist Baylor Estes. Photo by Joan Vinson

Local artists paint an experience for travelers who stay at Drifter Jack’s Hostel.

The hostel sits on top of Thai Noodle House, located right across the street from the UT campus, and doubles as a gallery for aspiring artists. Andy Ward, 2011 UT alumnus and owner of Drifter Jack’s, opened the hostel in early October of 2013, right in time for the Austin City Limits Music Festival.

Ward himself is an avid traveler and spent the past five years backpacking to over 35 countries.

“I started a hostel based on my love for traveling beyond anything else,” he said. “In hostels you tend to meet more people and you have more genuine experiences and it’s just something I fell in love with and wanted to do here in Austin.”

He said he felt other hostels in the city were missing a family atmosphere and wanted to incorporate that into the hostel. His favorite hostels abroad always had a few murals but he wanted to cover his entire place in them.

“You create a space that is better for social interaction, I guess is one way to put it,” Ward said. “Our hostel is smaller and it offers an environment that’s easier to meet other people in and on top of that we’ve got a hostel that’s filled with murals from different local artists and it brings the real Austin vibe alive here.”

With over 20 artists contributing to the project, each room and hallway patch is true to its character. Ward said most of the artists are members of two collectives in Austin: Third Coast Visions and Raw Paw.

“I have a combination of my favorite rooms,” he added. “We have rooms that are more psychedelic-type art…. And Raw Paw and their art tends to be more abstract and humorous and just off-the-wall and edgy and it’s great. So every room you walk into it’s like walking into a completely different place.”

Baylor Estes is one of the artists whose work is featured on the walls of Drifter Jack’s. Ward said Estes was instrumental in getting other artists on board.

“It just sounded like a lot of fun and Andy is a cool guy,” Estes said. “I guess the possibility of promotion was a factor but I think in general it was just good practice and just a cool space for art to be seen.”

Estes’ mural is on the wall near the check-in desk. It features a cartoon armadillo and cactus.“I think the Austin music scene is pretty well-known around the world but I think a lot of times the visual art is not as well known nationally or in Austin in general,” he said. “I feel in Austin there are a lot of great artists but not too many know about each other here in town.”

Besides Ward suggesting a Western theme, Estes kept to his own style, sketching the piece out before putting it on the wall.

“I don’t think it’s that Austin doesn’t necessarily have a visual arts culture,” Estes said. “I just don’t think it’s very cohesive….Hopefully it’s [conveying] the vibe of Austin itself, which in my experience has been laid back and creative and energetic.” 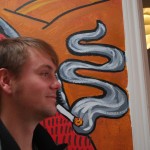 Artist Baylor Estes perfectly positions himself in front of a mural he designed and painted at Drifter Jack’s Hostel. By Kaine Korzekwa 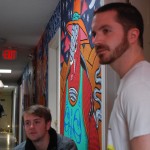 Artist Baylor Estes talks with Drifter Jack’s Hostel owner Andy Ward as artist Stephen Ferguson walks toward them from his mural location at the end of the hallway. By Kaine Korzekwa 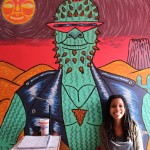 Drifter Jack’s Hostel employee Michelle Dotson sits behind the reception desk in front of a mural painted by Baylor Estes. By Joan Vinson 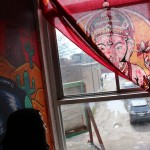 While sitting behind the reception desk at Drifter Jack’s Hostel, employee Michelle Dotson looks out of a window shaded by a tapestry. By Joan Vinson

Another artist, who is in the beginning stages of his project, is Stephen Ferguson. He said working at the hostel has given him more exposure in just a few days than he got in two years of working in his room at home.

“Since I’ve known that Andy opened this place up he said he had a space open for me to paint, which I thought would be really cool because everyone from all over the world comes and stays here so it would be a good opportunity to get my art seen,” Ferguson said.

Hailing from Lake Charles, La., he said he doesn’t get much attention for his art there and enjoys coming to Austin because “it’s a whole different world.” He is hoping to move permanently to Austin in the coming months.

For many of the artists, including Ferguson, this work is something new for them on their journeys to becoming successful artists.

“For me it’s mostly for fun but also because I’ve never done anything permanent that I didn’t take home with me afterward or something so it’s really neat,” he said. “I came here not knowing what I’d do and I just brought several different colors of paint and thought ‘I’ll just see what happens.’ ” 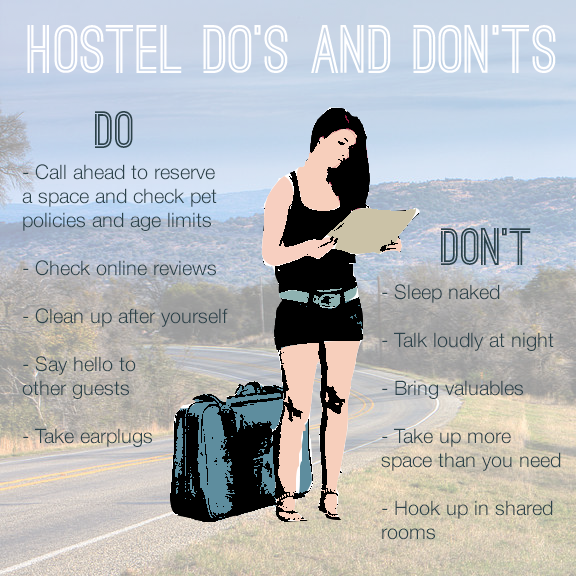 While painting at the hostel, people from Switzerland, Australia, Ireland and England have already been supportive of his work.

“This is really cool,” he said. “I guess I’m chasing my dream. Hopefully I become successful at it…. At the bottom of the painting I’m going to write ‘this is the end’ since right now there’s a lot of that end-of-the-world talk but also because this is the end of the hallway.”

Brandon Wilson painted an entire room while alternating between listening to music and watching “Buffy the Vampire Slayer.”

“It was really very spontaneous,” he said. “I was trying to plan ahead and trying to be that guy and trying to think what I was going to do. I really just had to wait until I got into the room, felt inspired and kind of just started free-handing everything. I just drew it up as I went along.”

A self-prescribed caffeine addict, Wilson said he practically locked himself in the room for over a week to get the job done.

“People would come and tell me to take a break because they thought the paint fumes were making me loopy,” he said. “It was really intimidating. I had never done something on such a large scale before so that’s what I was kind of nervous about.”

Many of the artists include their social media information, such as Instagram, at the bottom of their artwork and Wilson said he’s gotten hits from all over the world. 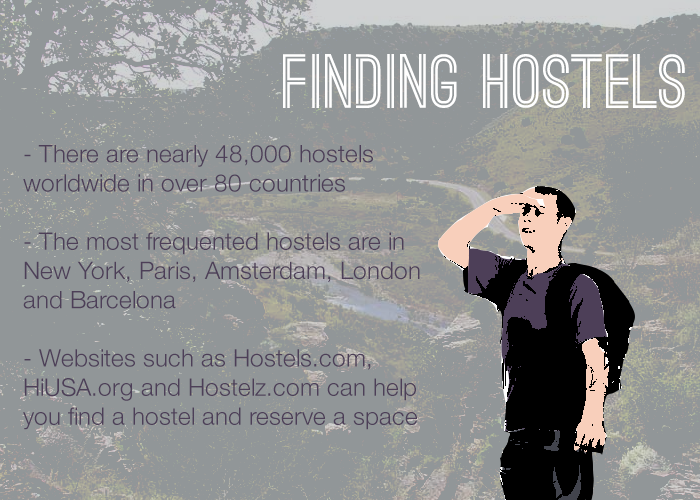 People from all walks of life and different parts of the world stay in rooms at Drifter Jack’s. Casey Cameron is from Brisbane, Australia and has been traveling the world for eight months. His adventures have brought him to Drifter Jack’s and Austin for five days.

Having just arrived, Cameron said he likes the hostel and Austin so far but has yet to go exploring.

“I want to eat some BBQ and spend some time on Sixth Street,” he said. “I love the idea of just meeting people and seeing what they’re doing and just going with it. Perhaps someone is going on an adventure you can join.” 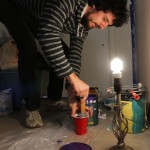 Artist Stephen Ferguson concocts a paint mixture for a mural he is working on at Drifter Jack’s Hostel. By Joan Vinson 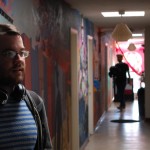 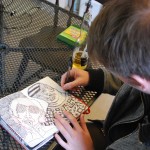 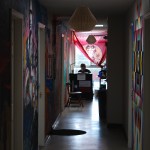 Drifter Jack’s Hostel employee Nathan Pacey sits at the reception desk where he welcomes travelers to Austin. By Kaine Korzekwa 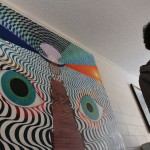 Artist Stephen Ferguson stands in front of his painting that is located in the dining area of Drifter Jack’s Hostel. By Joan Vinson 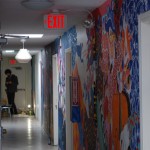 Artist Stephen Ferguson stands at the end of the hall painting a mural of a cowboy riding a giant snake, a design that fits the western theme at Drifter Jack’s Hostel. By Kaine Korzekwa

That adventure at the intersection of art and travel is just what Ward had in mind when he got the idea to start a hostel and fill it with local art.