A New Way to Light Up

Fifty years after cigarette smoking was first linked to a significant increase in cancer risk by the American Surgeon General Report, a new way to light up has caught fire in the United States, specifically among young people.

E-cigarettes, nicotine inhalers that heat a flavored liquid into a vapor, giving the smoker the same rush as a puff of a traditional cigarette, are gaining popularity despite uncertainty surrounding potential health risks. Because the “vaping” phenomenon is so new, the jury is still out on the long term risks associated with smoking e-cigarettes. While initial studies have shown that the electronic versions contain fewer trace elements of harmful toxins than a traditional cigarette, it doesn’t necessarily mean they are safe.

Part of the appeal of the e-cigarette is the potential to help heavy smokers wean off their nicotine habit. Studies seeking to prove the effectiveness of e-cigarettes in helping smokers quit have been problematic and have produced mixed results. Some smokers continue to light up traditional cigarettes, substituting the e-cigarette only when necessary in public spaces. However, others have found that purchasing the e-cigarette has helped them kick their cravings. 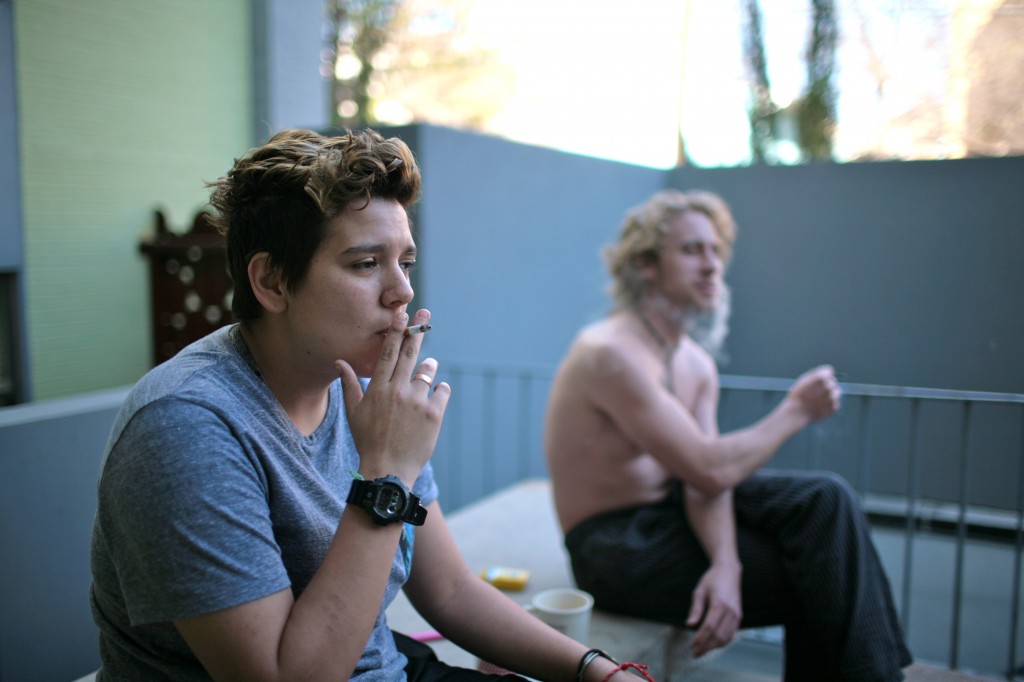 UT sophomores Zoe Reames-Zepada and Gandalf smoke cigarettes outside of their West Campus apartment Tuesday evening. Since tobacco was banned at The University of Texas in 2012, students are rarely seen smoking on campus anymore.

Estuardo Loranca, a 20-year-old food service worker for the University of Texas, says that he feels the e-cigarette has made him less dependent on cigarettes. Although he has had the urge to smoke traditional cigarettes, the previously two pack a week smoker hasn’t picked one up since switching to the e-cig eight months ago.

The model he bought allows him to adjust his nicotine level as he weans off his addiction. Loranca says that the switch for him has been relatively easy, without the anxiety and other withdrawal symptoms he experienced when trying to quit cold turkey a few years ago. He also says that he will most likely continue smoking the e-cigarette even when he reaches his eventual goal of kicking his nicotine habit completely.

“I want to get off the nicotine and maybe switch to a flavor, like a fruity flavor. There are hundreds of flavors out there. I think I’ll get to the point where I enjoy the e-cig the same way I enjoy hookah,” Loranca says. 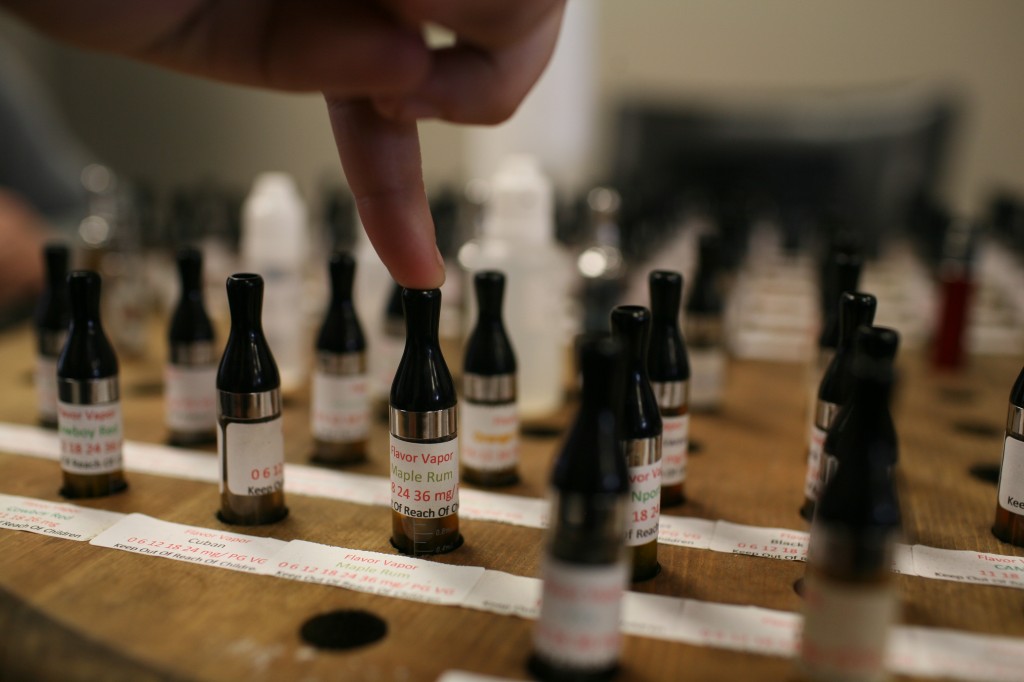 A customer glances over the many e-juice flavors. Flavor Vapor features over 100 liquid flavors, priced between seven and 16 dollars, and occasionally takes requests for new ones.

The many flavors are a large part of the current marketing strategy for e-cigarette promoters, and large part of the problem for those concerned with them. A January newscast by CBS news on the topic reported that most smokers become addicted by the age of 18, and almost all smokers become addicted before age 21. Loranca admitted to have started smoking more than six years ago. There is concern that e-cigarettes will act as a gateway for young smokers to become addicted to all tobacco products, rather than exclusively encouraging current smokers to quit.

Another controversial aspect of the current e-cigarette market is the lack of FDA regulation. As of right now, the Federal Food and Drug Administration is not involved in the manufacturing and distribution of e-cigarette products. This means that e-cigarette companies can’t be held accountable for what is in their products. A fact that Loranca says makes him thankful that the e-cigarette has made him a less frequent smoker.

“I’m actually not even using it as much as I expected to. It’s almost disappointing in a way because I kind of enjoy smoking, but at the same time I’m happy about it. That’s less toxins going into my body,” he says.

Despite overwhelming evidence that smoking cigarettes greatly increases the risk for heart disease, lung disease, and at least a dozen cancers, 44 million Americans continue to light up every day. For decades, smoking was glamorized by prominent figures like Edward R. Murrow and Audrey Hepburn in Breakfast at Tiffany’s. Now it is the e-cigarette whose use has taken on a similar glamorization, attracting young people but raising skepticism among parents and medical professionals who encourage consumers not to fall victim to the same deceptive practices used by big tobacco companies in the past.

← The Life of a Hijabi
Keep on Truckin': UT Sophomore Launches Kebabeque →