An Alternative Approach to Homeless Housing 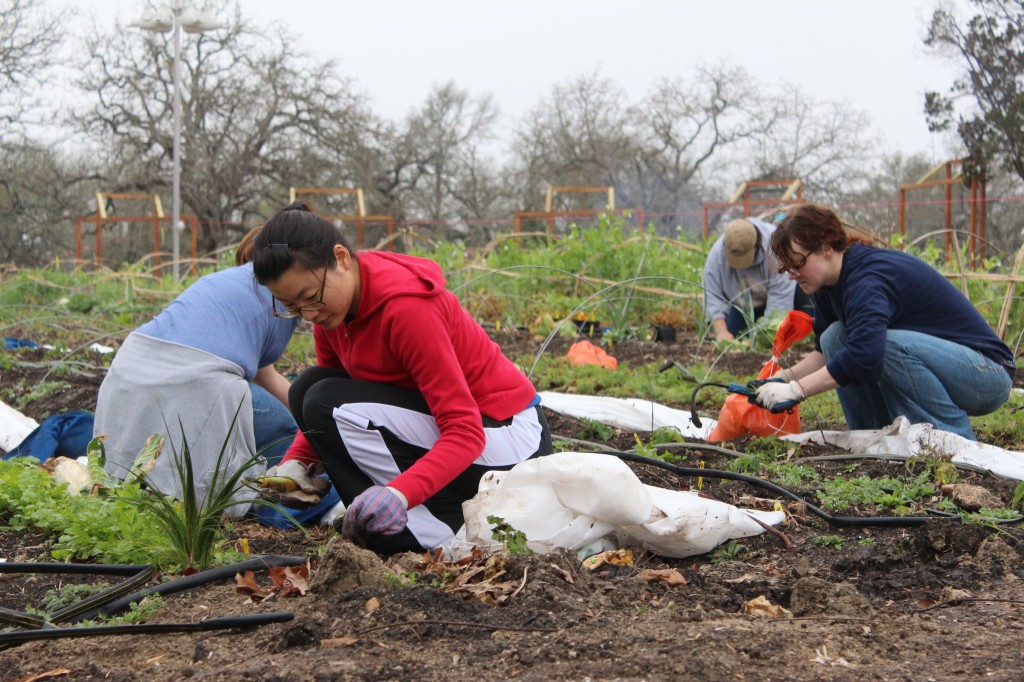 A group of volunteers sow the fields at the Community First! gardens located in East Austin. Photo by Joan Vinson.

The people behind the Community First! project picture a $7-million, 27-acre space in East Austin filled with housing, living and gardening opportunities for Austin’s chronically homeless.

“Much more than wanting to be rid of the homeless as if they are a problem, we want to hold onto them because they are a treasure and we think that Austin is really going to see that and come up around this space,” said Heidi Sloan, who is in charge of animal husbandry and pasture management for the project.

Community First!, located at 9301 Hog Eye Lane, is just one program under the umbrella of Mobile Loaves & Fishes, an organization that started 15 years ago by combining food trucks and ministry to deliver food to homeless people. Along with Community First!, it leads two other offshoot programs: the Relationships & Opportunities Allowing for Dignity & Security program and Genesis Gardens. Many of the programs overlap in their day-to-day activities and utilize volunteers for most of their work. 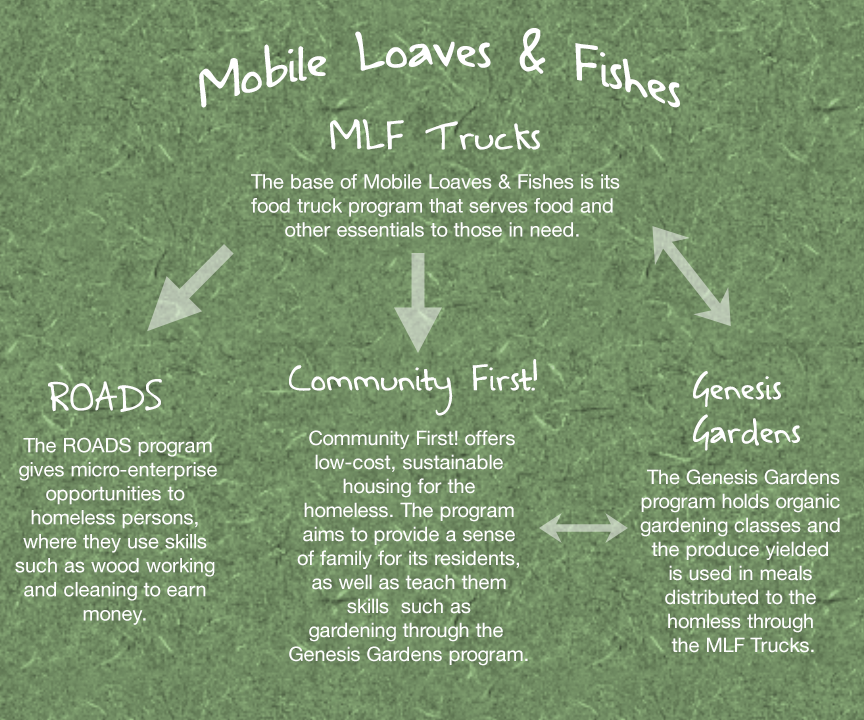 The first installments in the community project are the gardens, pathways, and fire pit areas, and this is why Sloan, who is actually affiliated with Genesis Gardens, has her hand in the project.

“Genesis Gardens started as a seed-to-table farming program,” she said. “We thought we were growing food but it turns out we are growing relationships. We are growing care and most of all we are growing homemaking skills. And so the relationship of Genesis Gardens to Community First! is that when people move into their housing they often don’t have those skills and the knowledge needed to create a good place for themselves and to be good neighbors to those around them.” 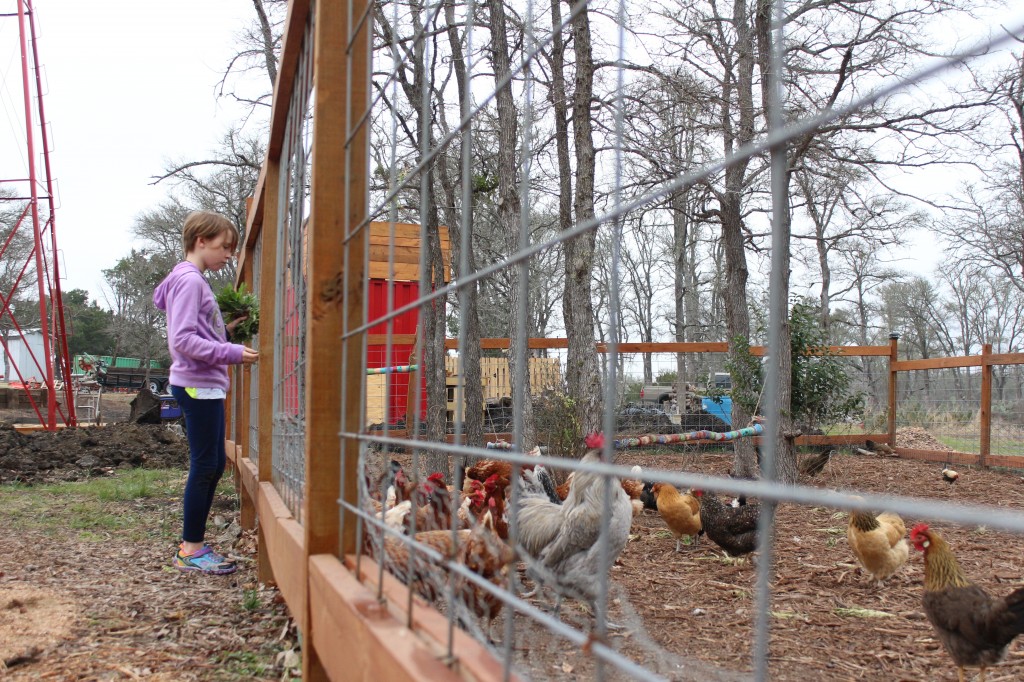 Standing next to a chicken coop, a young volunteer prepares to feed the chickens with food she picked from Genesis Gardens. Photo by Joan Vinson.

Sloan said that almost all of the funding for the project has come from individual donations, and that the group has garnered $6 million of their $7-million goal. She said they rarely pursue federal funds or grants because they “put strings on things” and “create paradigms of success that don’t look like the paradigms [Community First!] is pursuing.”

Having numerous gardens, pathways, fire pits, a chicken coop and life-sized chessboard already in place, the group hopes to have the housing areas under construction by the summer and some residents moved in by next year, said Sloan. She added that there are also plans for a great hall building, an Alamo Drafthouse drive-in theatre and a bed and breakfast, all to offer employment opportunities to the community’s residents. 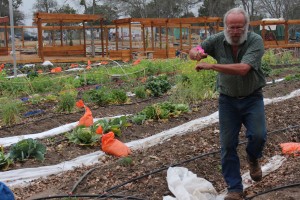 While sectioning off parts of Genesis Gardens, a volunteer is careful not to step on plants. Photo by Joan Vinson.

The housing in this space will not be free, and Mobile Loaves & Fishes president Alan Graham said his plan will feature RVs and micro houses at four different price models: $90, $200, $325 and $375 per month.

“Covenant number one [every resident] makes is to pay [his or her] rent, period, end of story,” he said. “If you don’t pay your rent you’re not going to live there very long. You have to pay.”

While Graham began with food trucks 15 years ago, it was 10 years ago that he formed the idea to lift the homeless off the streets. They currently house previously homeless people in RV parks all across the city.

“Ten years ago, because I love to hunt and fish, I was going to look at a ranch with a friend of mine who was wanting to buy it over near Fredericksburg,” Graham said. “I saw an RV over there and I got really interested in that RV and I thought when I was looking inside it ‘this was a place that I could live’ and so we went and bought one and lifted a guy off the streets into an RV park in Austin. Ten years later that guy still lives in that RV and we have about 60 total.” 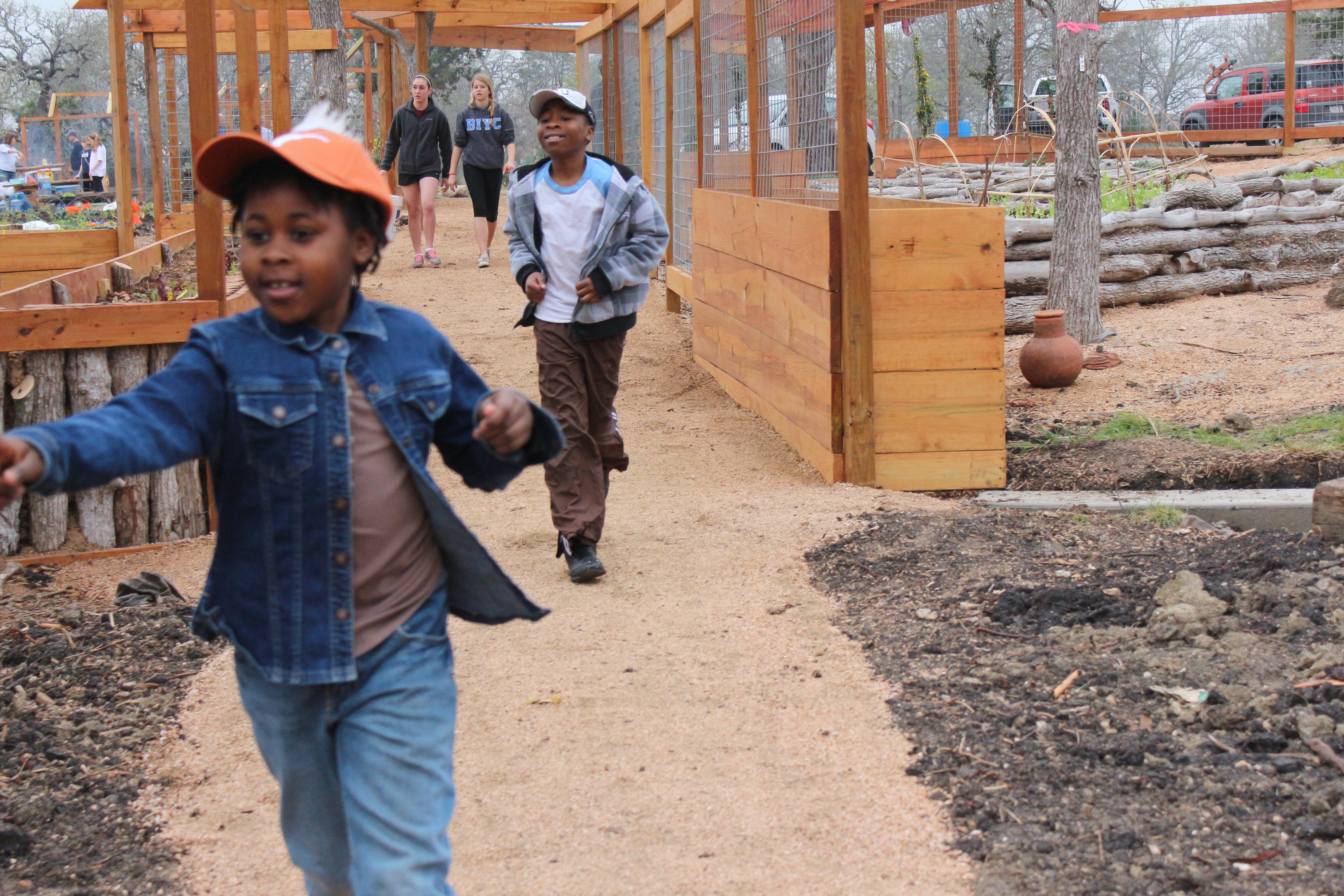 A group of volunteers scurries to the chicken coop. Photo by Joan Vinson. 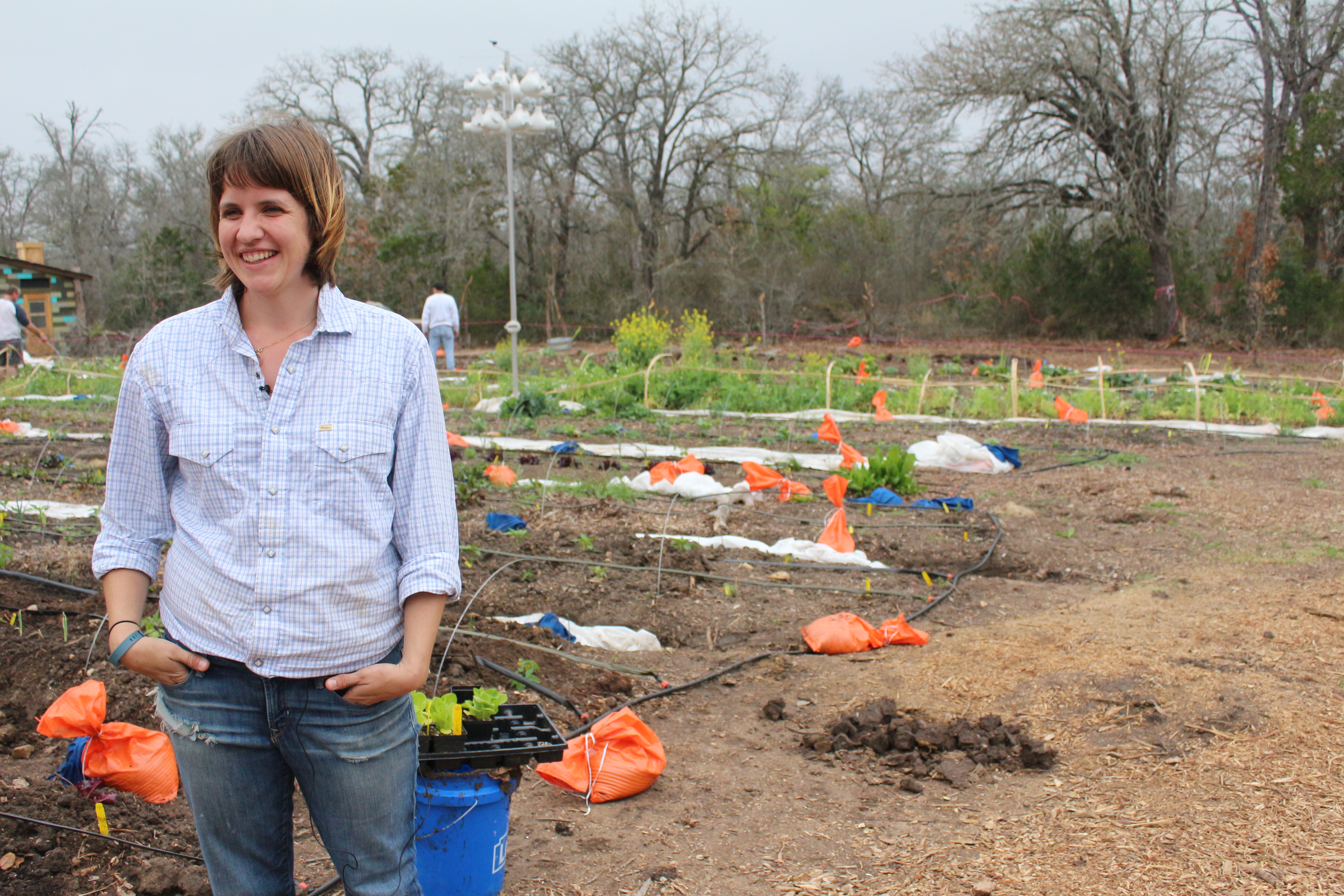 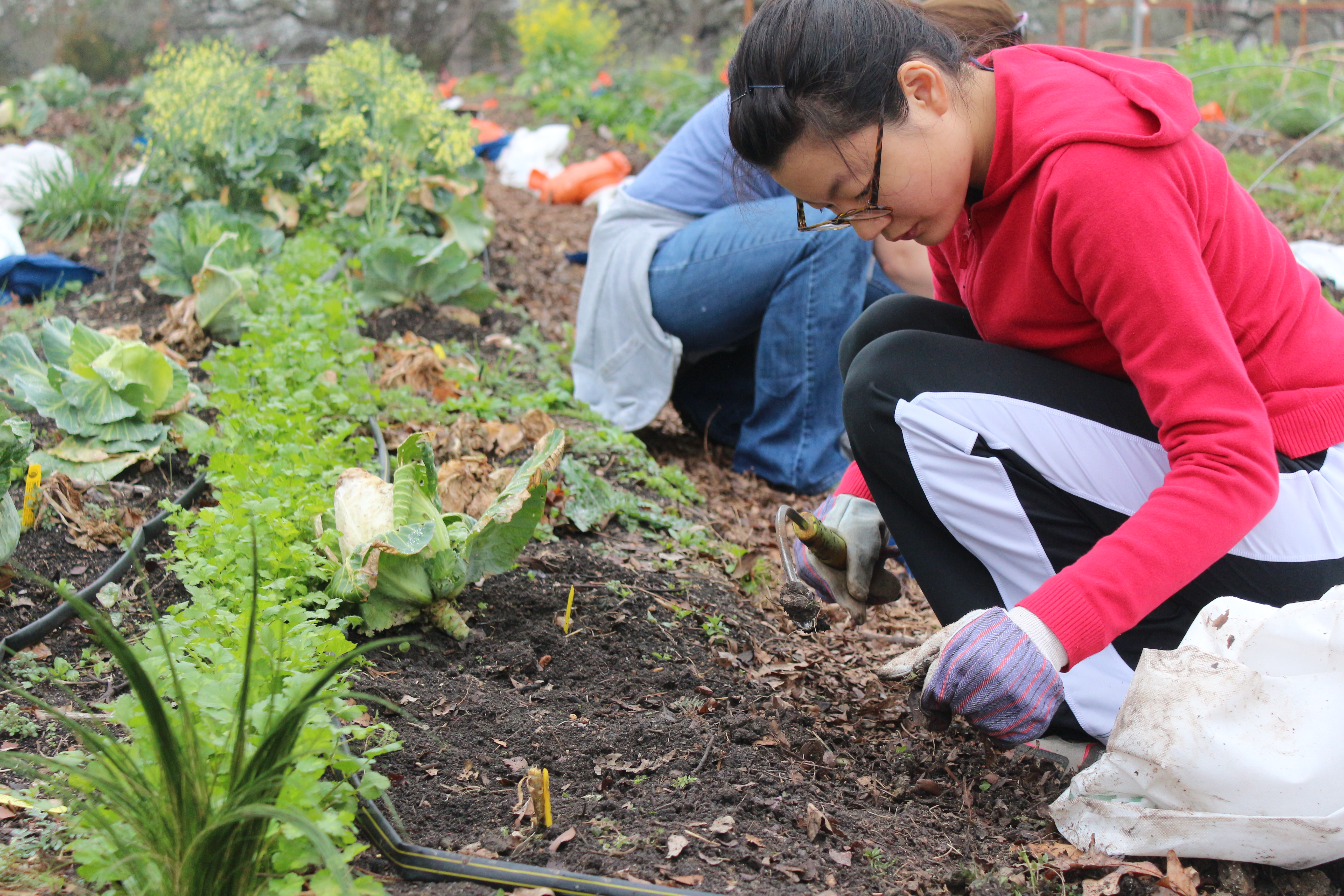 A volunteer plants seeds at Genesis Gardens, which is on the Community First! property in East Austin. Photo by Joan Vinson. 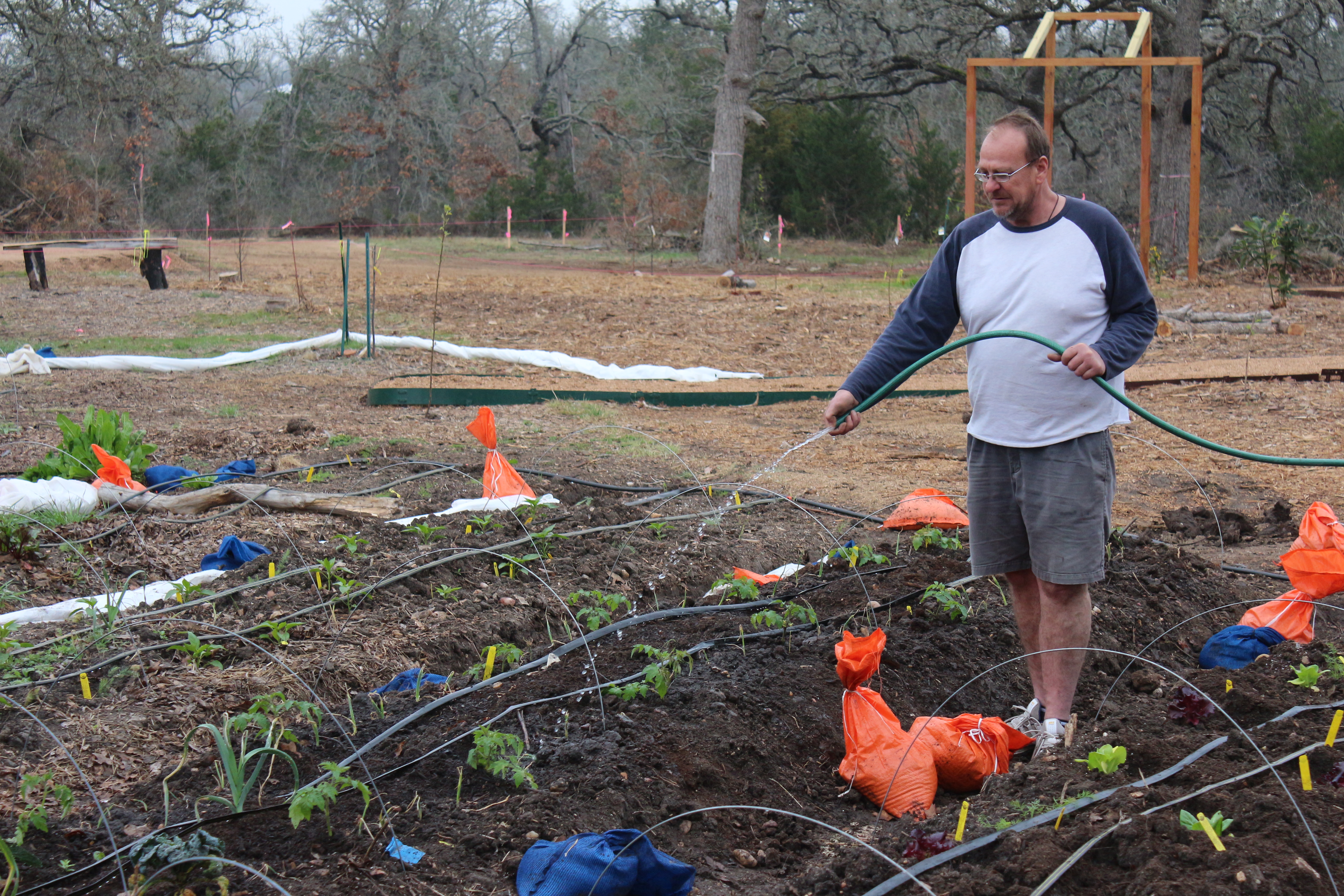 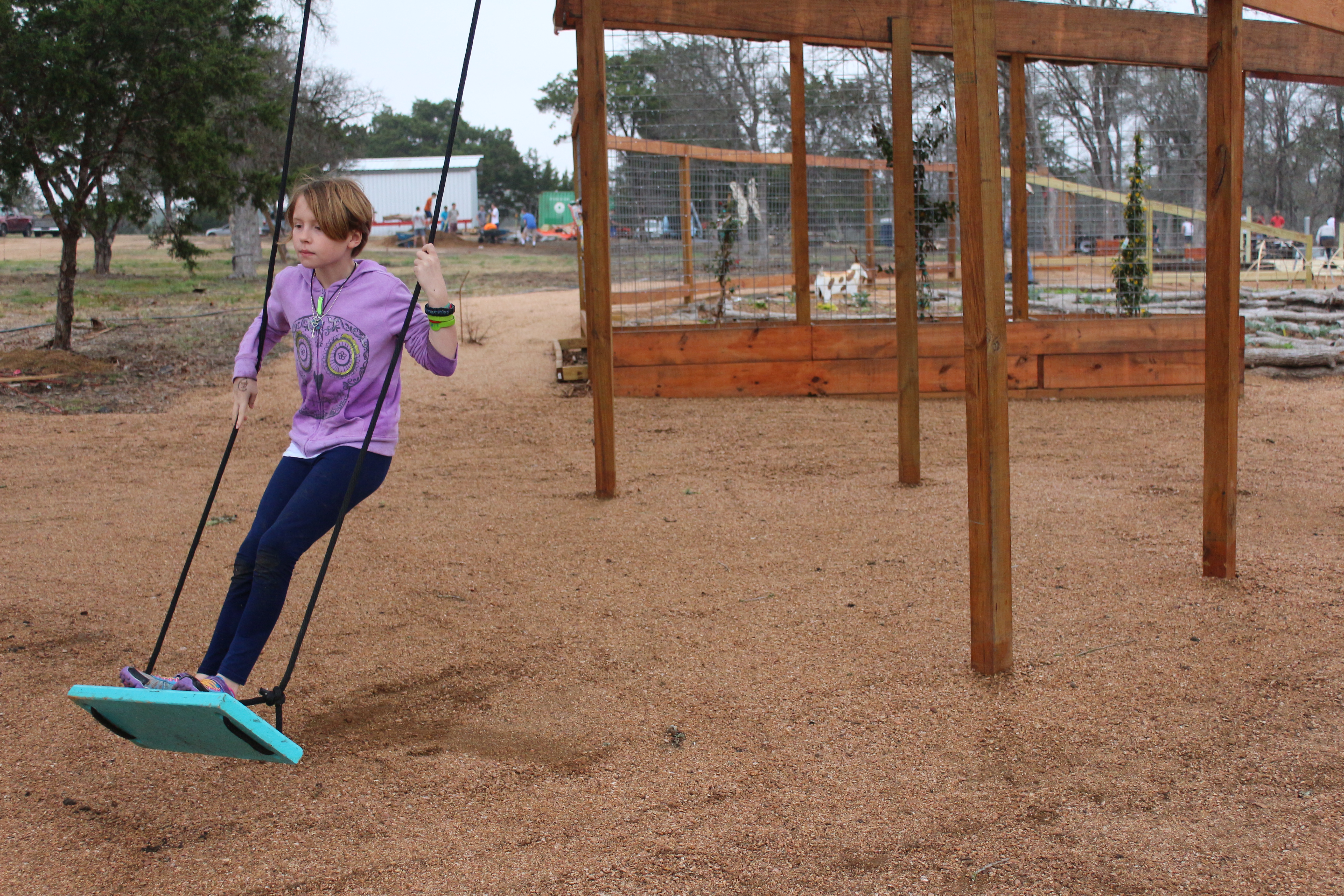 Standing on a swing, a young volunteer takes a break from her duties at the Community First! site in East Austin. Photo by Joan Vinson. 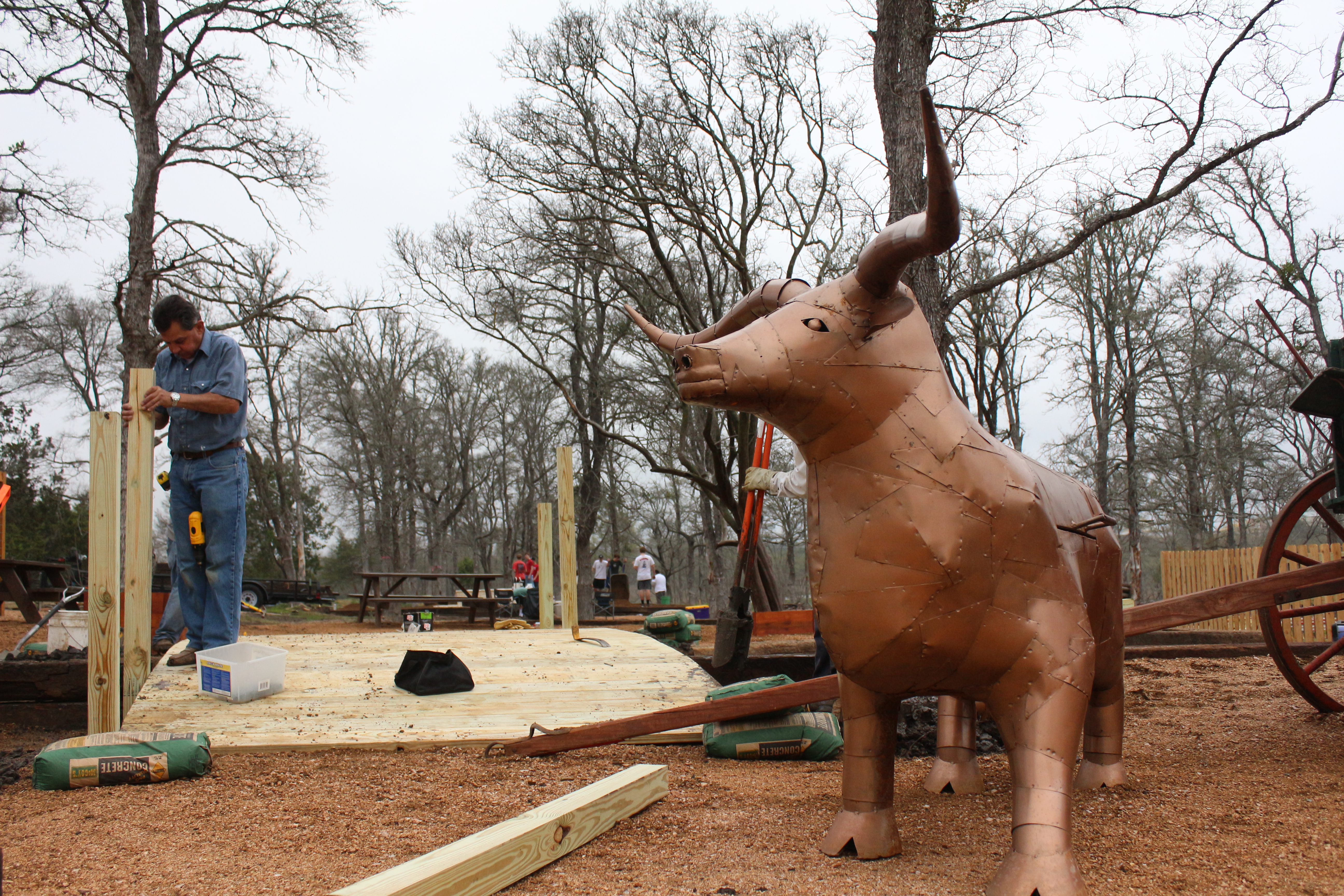 A volunteer lodges a plank of wood into a bed of concrete to construct a bridge. Photo by Joan Vinson. 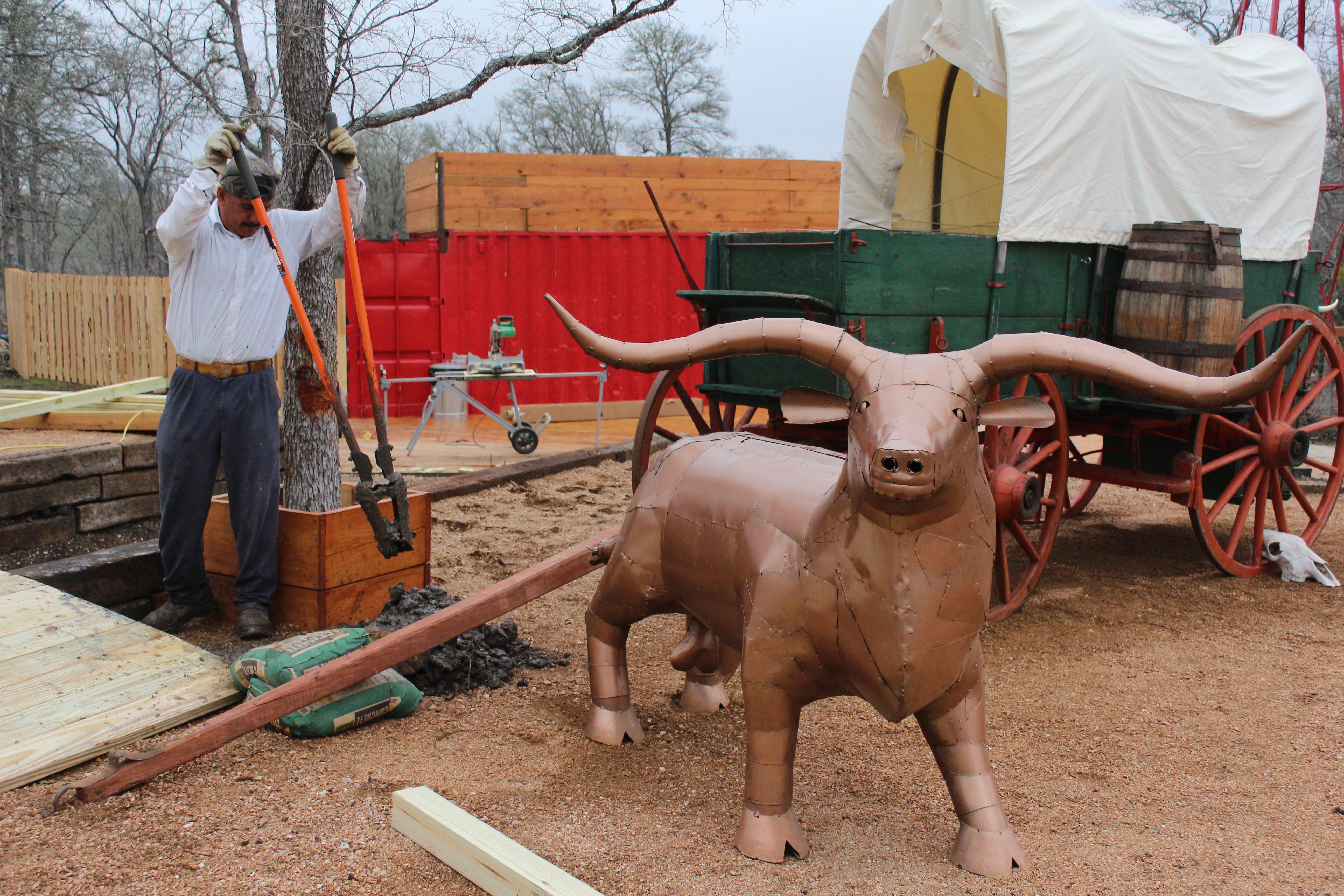 Standing next to a metal longhorn, a volunteer digs a hole in preparation to construct a bridge. Photo by Joan Vinson. 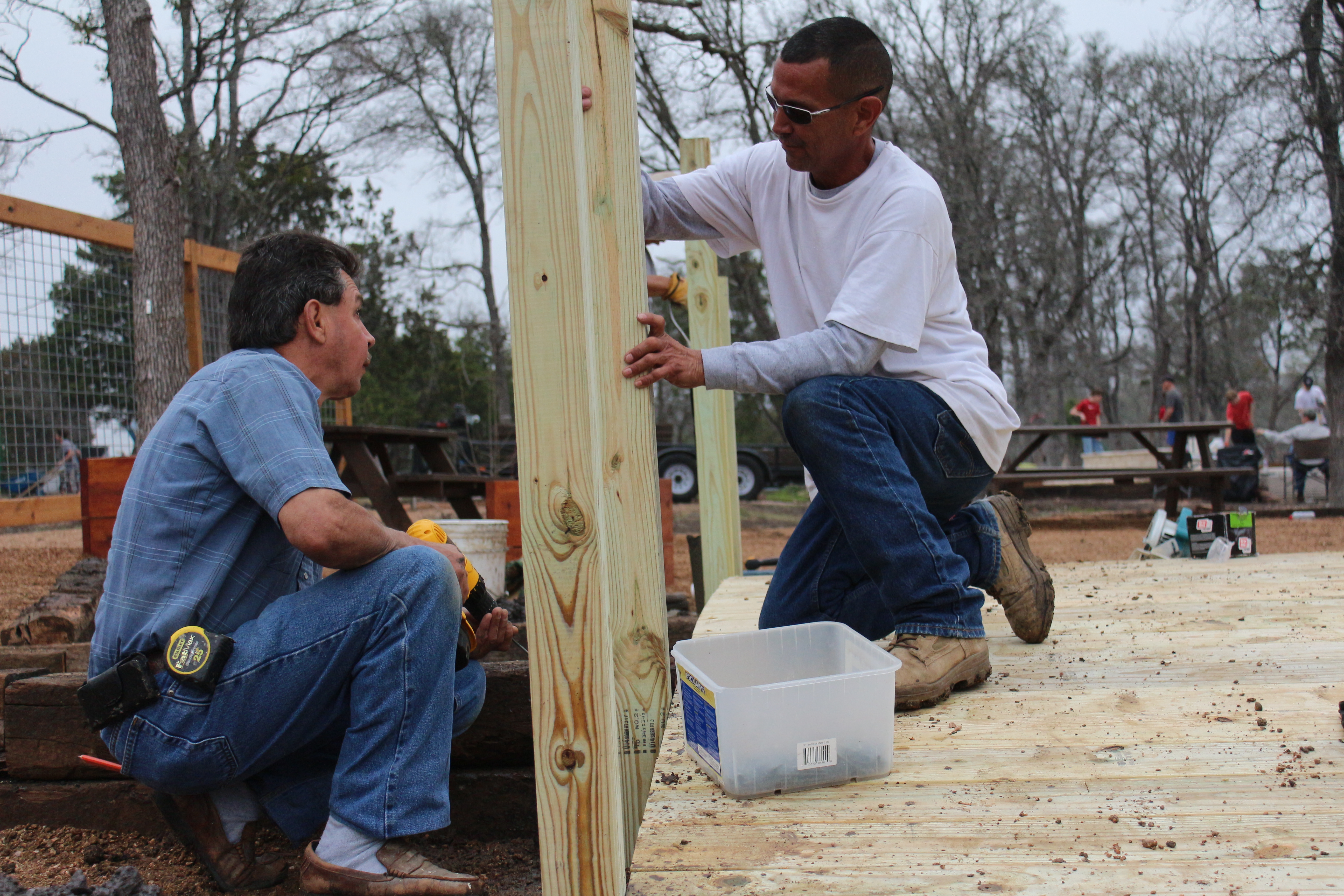 Two volunteers work together to create a bridge over the Memorial Gardens on the Community First! 27 acres. Photo by Joan Vinson. 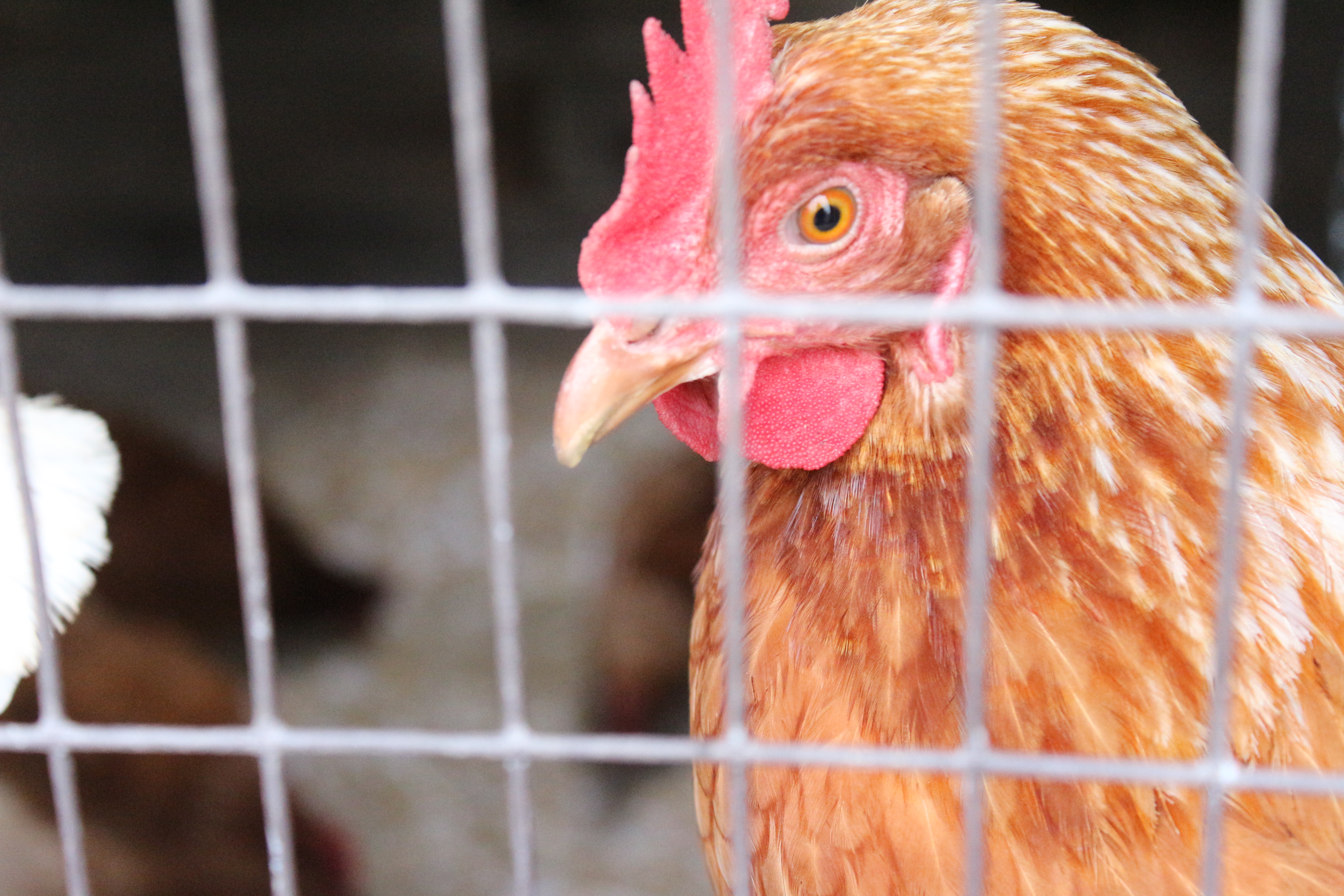 Peeping its eye out of the chicken coop, the bird takes in all of the activity going on around him. Photo by Joan Vinson. 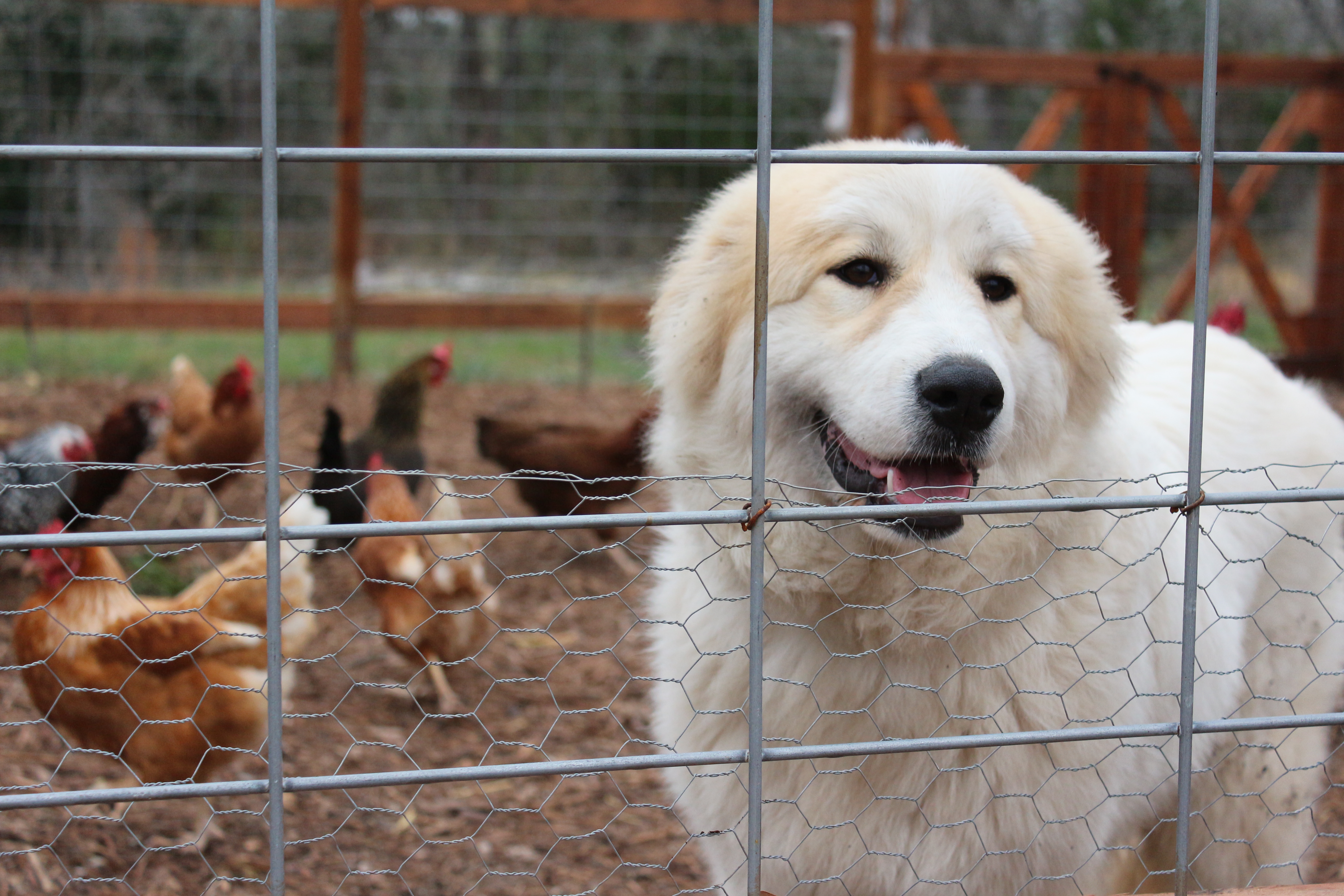 A dog makes his way into the chicken coop at the Community First! site. Photo by Joan Vinson.

Rabbits and chickens are some of the many animals at the Community First! 27 acres. Photo by Joan Vinson. 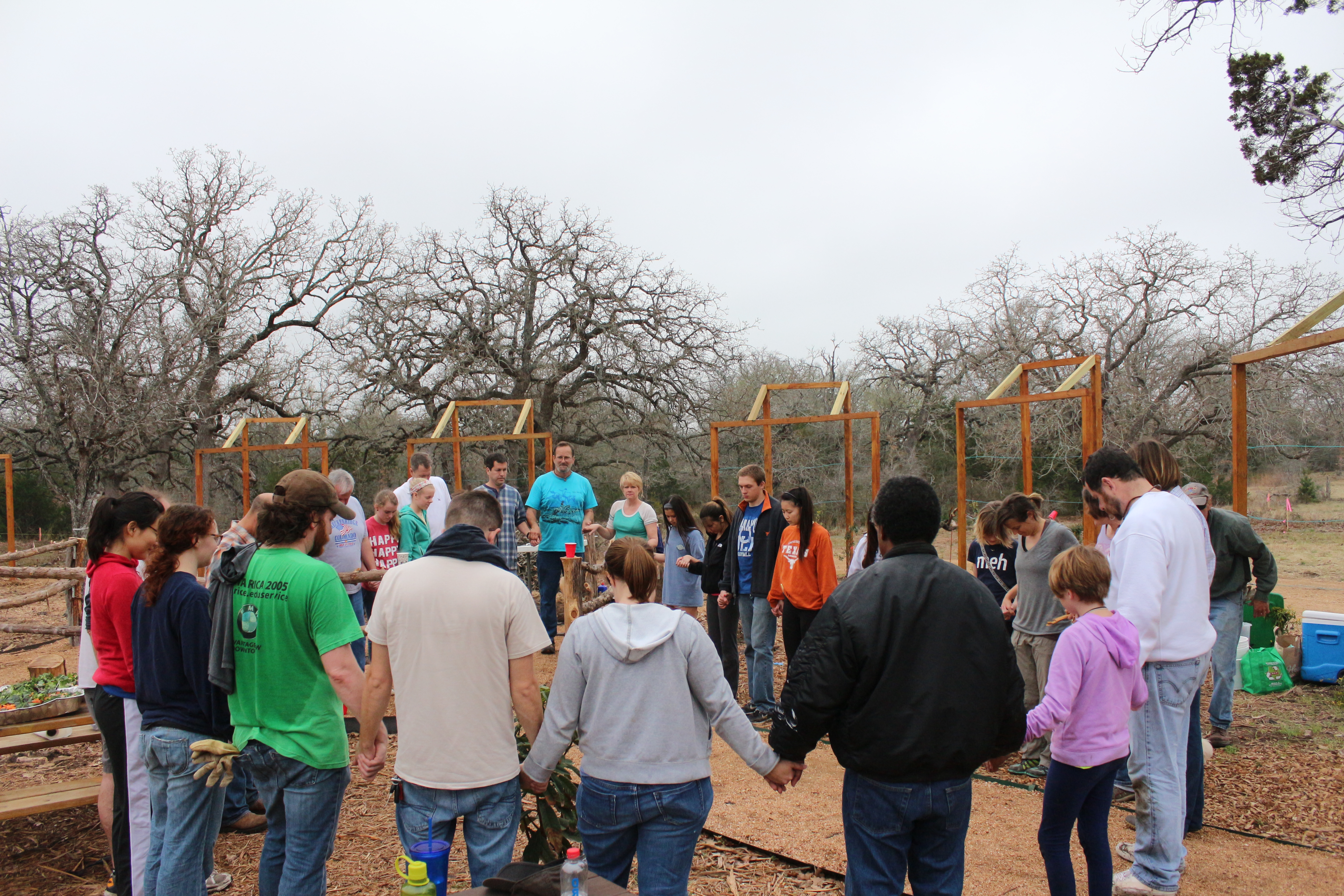 Standing together in prayer, a group of volunteers link hands before digging into their Saturday brunch. Photo by Joan Vinson. 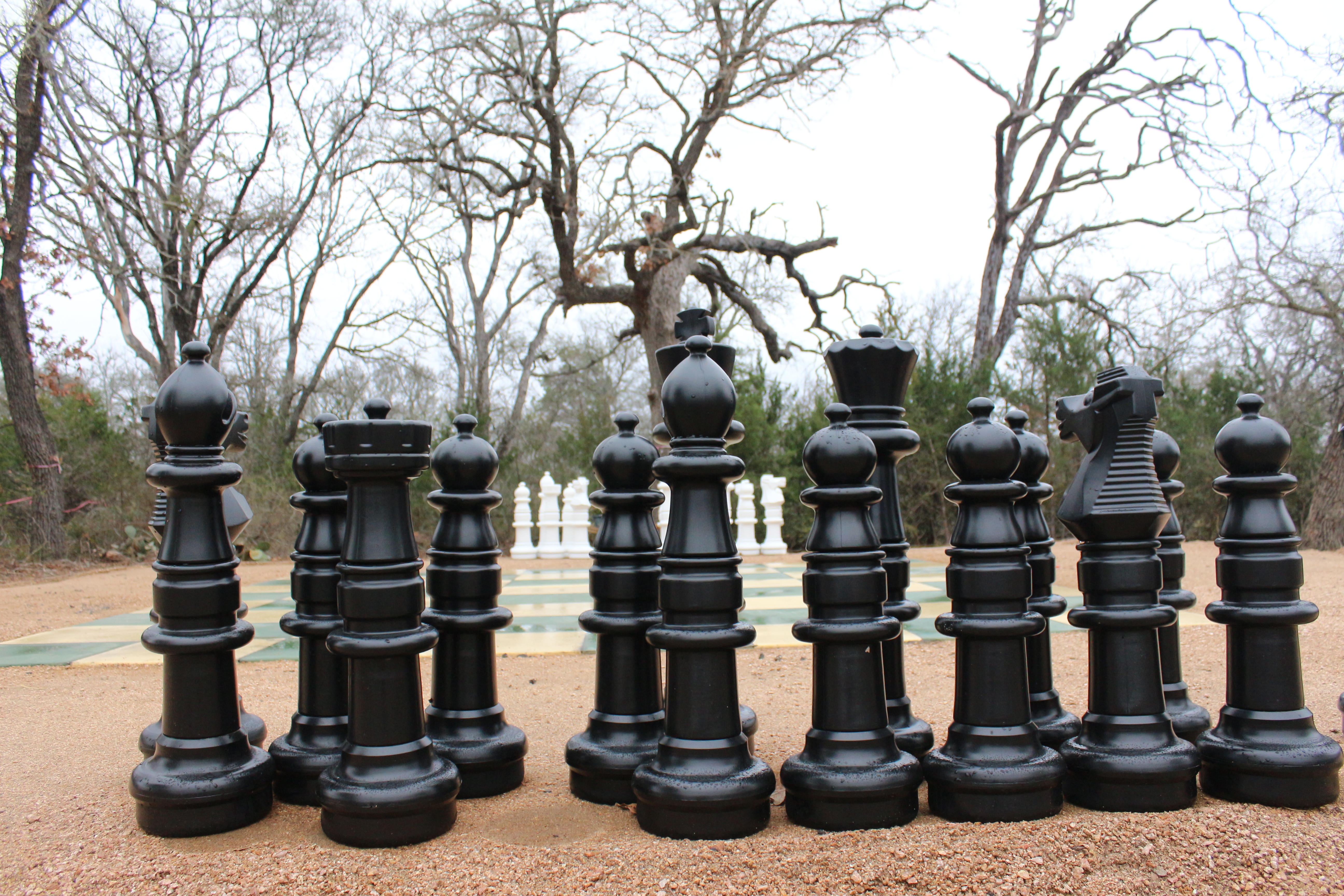 A life-size chessboard will entertain Community First! members in the months to come. Photo by Joan Vinson. (3542)

Mother of five Kelbi Schlueter enjoys taking her children to volunteer with her and thinks it’s an important experience for her children.

“The kids love it and get very comfortable in different situations with different people,” she said. “My favorite thing is that we actually volunteer every Christmas morning and serve others first before having our own Christmas later.”

Amanda Qarashi works in the information and technology department for Mobile Loaves & Fishes but is an avid volunteer with its different programs.

“I really think we offer the best volunteer experience of any non-profit,” she said. “You get a real human experience. I will never forget when, after an evening of dispersing food on the trucks, my son quietly said to me from the back seat, ‘You know what’s amazing is when you help other people it makes you feel better, too.’ ‘That’s absolutely the truth,’ I told him.”

Mayor Lee Leffingwell has expressed his support for the project.

“This project is an opportunity if it can flourish and grow to remove the [Austin Resource Center for the Homeless] from downtown,” Leffingwell told KVUE reporters for a story in November of last year.

While it may solve problems downtown, many are worried about the neighborhoods surrounding Community First! in East Austin and how it will affect them. When Mobile Loaves & Fishes took their plans to the city early in 2013, many residents, business owners and associations argued against the project.

Kenneth Koym, president of Imperial Valley Neighborhood Association, was a lead writer on a petition to stop the project. When the Multimedia Newsroom researched his name it was too late for an interview but a reporter found YouTube videos he posted online discussing Community First!.

“There are six subdivisions that have not been asked by investigators, somebody that comes in and asks what is your opinion, can you make room for these people?” Koym says in a video posted in March of last year after Graham had won approval from the city. “No, we haven’t been asked that. There’s a need.”

He said residents on properties neighboring Community First! are worried about increased crime and decreased property values. Stories also surfaced in reports by Koym to officials in state and federal governments that questioned Mobile Loaves and Fishes’ business practices and said that homeowners, families, children and elderly taxpayers got “bullied” in the organization’s deal with the city.

“We understand that the homeless need to have a place but the place for them has been selected not by us…but rather by a city council that approved of a staff recommendation,” he also says in the YouTube video.

A call to Ellis Johnston, a once-homeless man who now volunteers with Community First!, was not returned by press time.

Graham has said the community will be a secure, gated area and doesn’t anticipate any issues, but actually encourages surrounding neighborhoods to get involved in the project by visiting MLF.org. He added that, for him, Mobile Loaves & Fishes is always rooted in his faith.

“When you read scripture over and over and over again [Jesus] was out in the grittiness, in the boughs of the respective cities that he journey to reaching out and touching the most discarded humans that were out there and demanding that others do the same and actually challenging the authority at the time,” Graham said. “I kinda just wanted to do what he was doing. I wanted to go out there and find value in some of the human beings that most of us could look at and want to just kick to the street corner.”