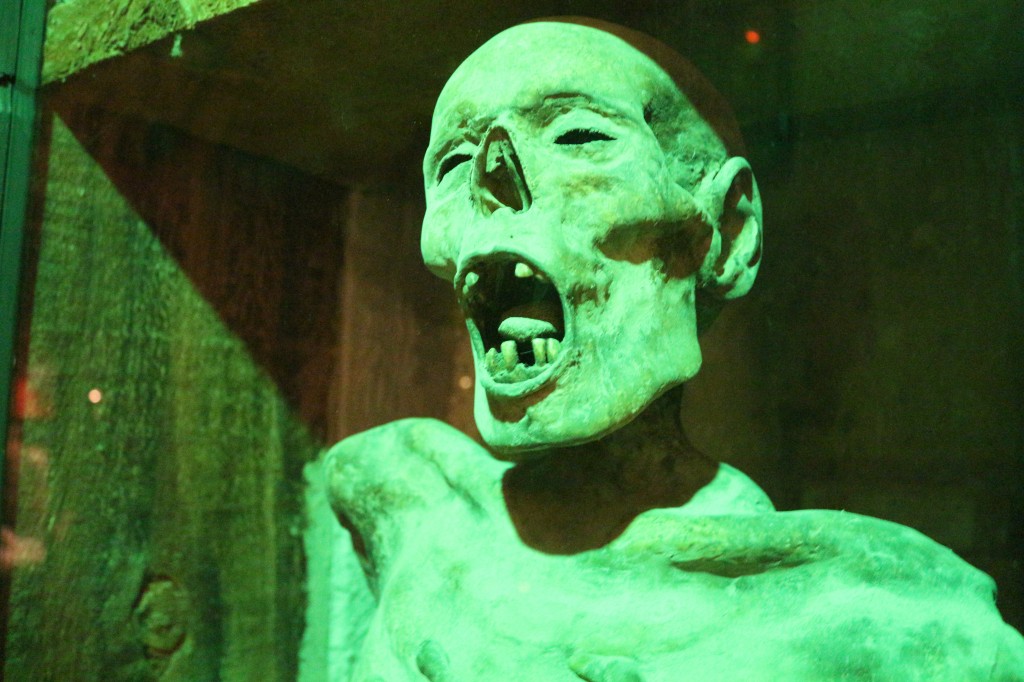 A dried and shrunken body is on exhibit at the Museum of the Weird. By Emma Banks

Since 2000, the slogan “Keep Austin Weird” has been synonymous with the city’s cool, authentic culture and helped to solidify the presence of local businesses in a growing metropolis. Few businesses represent this ideal more precisely than the Museum of the Weird. 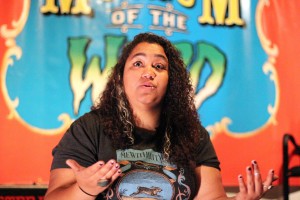 Danielle Wilson, manager at Museum of the Weird. By Emma Banks

The museum, located on East 6th Street, is one of the few places in the country that visitors can still go to see all sorts of oddities and sideshows. Historically, this type of entertainment was most popular with the rise of traveling circuses in the early 1900s, and declined quickly when the introduction of television made it easy to see the world’s most exotic attractions at no cost. Owner Steve Busti and manager Danielle Wilson hope to change that.

“[The museum] is really unique not just to Austin but to the world,” Wilson said. “Where else are you going to see a taxidermy two-headed cow, or a guy swallowing a sword or a natural born freak doing sideshow acts? It’s just one of those things, when you come to Austin, you have to see it, because you’re probably not going to see it anywhere else. It’s kind of a once in a lifetime thing.” 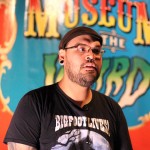 Busti could spend a lifetime collecting oddities and explaining their significance to others. It’s his passion and his lifelong venture to instill a love of the weird in a society where being desensitized is common and the strange can go largely unnoticed.

Some sideshow acts, however, are impossible to ignore. Sword swallower Juan Martinez is the perfect example of an attention-grabbing performance.

“How I got into it? I was bored. I already knew a ton of acts and I wanted to learn something new,” Martinez said. “Sword swallowing seemed a good one because that’s the big one; that’s an act that a lot of people can respect.”

Manager Wilson is a testament to what seems to be a passion that is contagious. After moving to Austin from Indiana three and a half years ago, she was quickly hired at the Museum of the Weird and almost immediately adopted an obsession similar to Busti’s. Her interest has yet to wane.

“I knew nothing about it but as I’ve lived here and worked it has become a passion,” Wilson said. “It is so interesting, and the history is awesome. It’s a subculture; people that know about it really know about it. There’s definitely a community.”

The museum, however, is certainly not only for those who cultivate a passion for the weird. The majority of visitors are simply passers-by who are driven by curiosity and want to learn more. Tickets are $8 per person and the museum is open daily, 10 a.m. to midnight. Customer Mckenzie Andrews said it was well worth the price.

“I’m from out of town and thought it would be cool to see,” Andrews said. “The whole thing is so weird — weird but cool. Austin has definitely stuck to its motto.”

At the core of Busti’s business is a passion for life’s strange and normal moments — the weird in both the uncommon and the common. He plans to expand and open a second location on South Congress soon.