Get Your Curl On 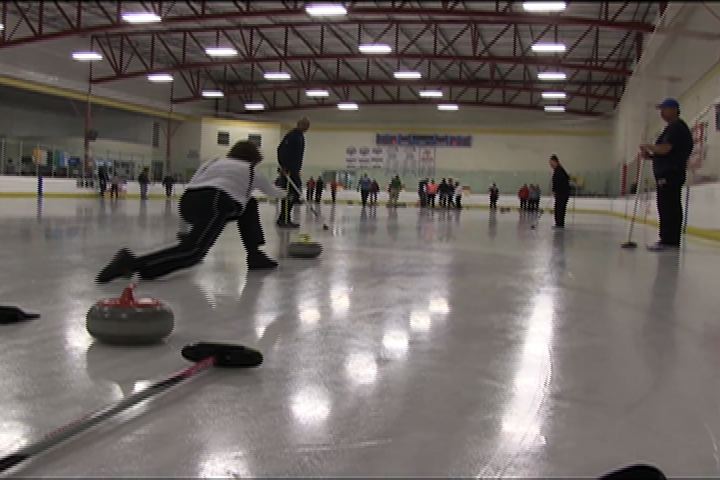 It seems as if criticism of the 2014 Winter Olympics was never in short supply, from the media’s coverage of lack of attendees to the hashtag sochiproblems inundating Twitter. Despite all the negative press, curling, the popular Canadian sport, once again became a crowd favorite, especially among Austinites.

After the Winter Olympics, people from all over Austin lined up to take Sunday morning “learn to curl” classes held by the Lone Star Curling Club at Austin’s only ice rink, Chaparral Ice on West Anderson Lane.

Pat Popovich, a Level 1 Lone Star Curling Club instructor, registered with the U.S. Curling Association said that they get a lot of interest in the sport during the Olympics because it’s on TV.

Popovich teaches one of two classes on Sunday mornings from 9:30-11:45. Their “learn to curl” classes went from about 15 people in each class to about 50 after the Olympics. So far they have taught 400 people this year.

“We rely 100 percent on the Olympics to get members,” she said.

“I read an article in the Austin American-Statesmen on Christmas Day in the sports section and said to myself, it looks like bowling on ice to me,” Popovich said. “I went to a ‘learn to curl’ and I haven’t stopped since and that was seven years ago.”

The game is sort of a hybrid of bowling and shuffleboard but played on ice with 40-pound “rocks” or “stones” as she described the game.

Two teams of four compete to deliver 40-pound stones to the center of the target or “house” by lunging the stone forward while the other teammates “sweep” ahead of the stone with a brush attached to a stick to ensure it reaches its target. Each member of the team has two stones to move across “pebbled,” or specially watered ice, and whichever team has the closest stone at the center of the target wins the game, she said.

“It’s easy to learn but it takes a lot of balance,” Popovich said. “We don’t wear ice skates that’s never ever ever.”

“I’ve never worn ice skates in my life,” she added.

Instead they wear curling shoes or just plain old sneakers.

She plays in a more advanced league in the Lone Star Curling Club that has been meeting on Sundays and will continue through June.

What she likes most about teaching the game, she said, is people’s sheer interest in it.

“Once they understand how to deliver a rock and how to sweep, they really do enjoy it,” Popovich said. “Because it really is a silly sport.” 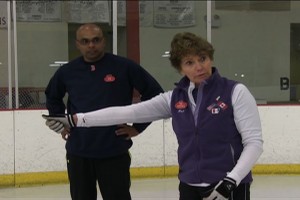 The Lone Star Curling Club also has a little league for new curlers this month to accommodate the influx of new members on Friday nights from 9:15-11:15.

Marcy Davis-Skonieczny, 44-year-old real estate agent in Austin, got her competitive women’s kickball teammates in on the fun after she watched Curling on the Olympics.

After she and three of her friends attended a “learn to curl,” they started playing on Friday nights for new curlers.

“We had our first match, which we won,” Davis-Skonieczny said.

She has been playing for one month and said it’s a lot harder than it looks.

“There’s a lot more strategy involved than you think,” she said. “What you imagine might be your strength, may not be.”

What she likes most about Curling is the camaraderie between players.

“You want to see your opposition enjoying the game,” Davis-Skonieczny said.

She has been Curling for one month so far and can see herself playing for a long time to come.

Landon Russell, 49, another Level 1 Instructor, said the Olympics and a quick Google search for clubs in Austin a few years ago got him into Curling.

“What I like about it is that any body can play,” he said. “A couple years ago we had a 90-year-old who played in the club for a while.”

He said people of different ages from college kids, to children, to elderly people come to curl.

“We get all different kinds of folks,” Russell said.

He said there are also chances for the leagues to compete and his team has won tournaments in certain brackets.

“There’s a bonspiel or curling tournament the first of May in Dallas.” He said.

“It’s a lot of fun and you don’t need tons of athletic ability,” Russell said. “We are always looking for new members.”