While most University of Texas seniors are currently worrying about finals, graduate school, or where they will be working in the future, athletic training major Nikki Hogan has a different, yet equally pressing, matter to attend to. 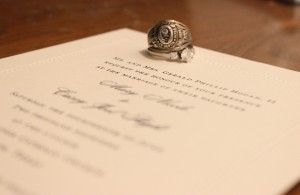 Receiving both her UT class ring and her engagement ring this year has been an emotional experience. “I’m happy to be done with undergrad,” Hogan said, “but I’m going to miss this place so much.”

“Wedding planning is a lot more fun than school work,” Hogan said, when asked about her upcoming wedding, a mere four weeks after graduation. “It’ll be really nice once I graduate though because I’ll finally be able to put all my attention on the wedding, which is what I really want to do!”
Hogan, who works with the UT women’s swimming and diving team, met her fiancée, Casey Hight, when the two worked together at JCPenney’s. Five years later, on Aug. 23, 2013, the night before Hogan was to return to Austin for her senior year at UT, Hight proposed.
Since the proposal, Hogan’s life has been a constant cycle of wedding planning, tests, and work with the UT athletic department. As a full-time student, it has been a challenge for Hogan to balance enough time for classes while still putting in adequate time for wedding planning, but she attributes the accomplishment of the planning to one person. 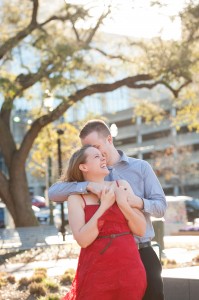 Hogan and Hight recently took their engagement pictures in downtown Houston, where they will be celebrating their wedding at Annunciation Catholic Church in June.
(Photo via Nikki Hogan)

“Planning my wedding and my graduation at the same time is hard, but my mom has been the biggest blessing in my life,” Hogan said. “She’s doing most of the planning and I help as much as I can. When tests [and other things] come up, I’m able to take a break from it.”
While getting married is not at the top of most graduating seniors’ to-do list, Hogan has been fortunate to have mostly positive reactions to her upcoming nuptials.

“Only one person has given me a slightly negative comment, most people are happy and excited,” Hogan said. “I was taking vitals on an athlete and he noticed my ring and asked if I was getting married. I told him ‘Yes, in June!’ and he said ‘But you’re so young!’”
Graduating from UT and getting married are not the only exciting transitions for Hogan this summer. In July, she will start her job as a graduate assistant with the women’s swimming and diving team at the University of Houston and will then begin graduate school at UH in the fall.
“As far as my future [in athletic training], I want to work as a high school athletic trainer and ultimately in a sports medicine clinic,” Hogan said. “But if an awesome opportunity arises, I will certainly take it!” 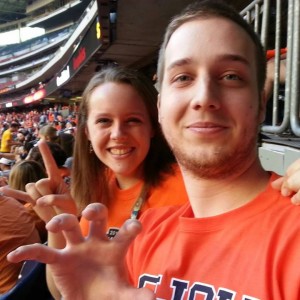 While the reality of her upcoming graduation and wedding has not yet completely sunk in, Hogan has conflicting feelings about the two events.
“The wedding is so happy and the graduation is so sad! I’m going to miss UT and Austin so much,” Hogan said. “This is where I really found myself and became me. But what I’m leaving for is the happiest, greatest thing I could imagine…a marriage with Casey Hight. That is amazing and scary and exciting and nerve-wracking! The wedding is keeping me from getting too sad [about graduation], because most of my friends are coming to the wedding!”