What’s the Hold Up? The Mopac Improvement Project 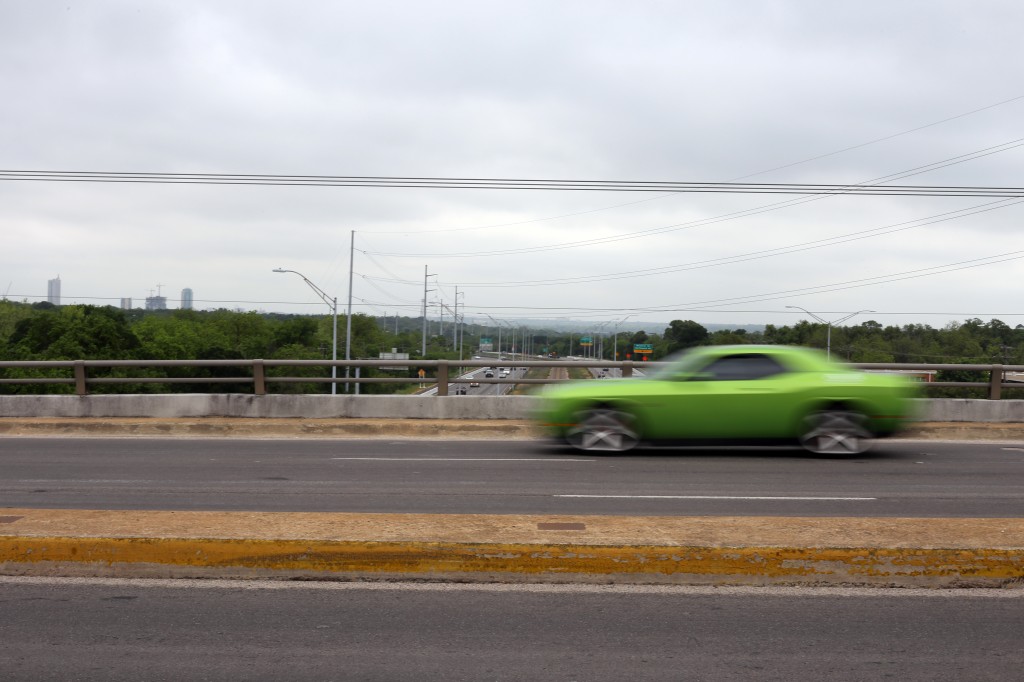 Traffic zooms over Mopac on the 35th street overpass. By Emma Banks

Long-awaited improvements to State Highway Loop 1- affectionately nicknamed Mopac because of the train that travels in between the north and southbound lanes, the Missouri Pacific – have finally begun, and will continue for the better part of the next year. The project is scheduled for completion in the fall of 2015, with final touches finishing up by early 2016, according to the project’s Director of Community Relations Steve Pustelnyk.

The project spans the length of Parmer Lane to Lady Bird Lake, an 11-mile stretch of work that will include adding additional asphalt, widening some bridges so one additional lane can be added in each direction, and new ramps that will be built to connect downtown with the new express lanes. 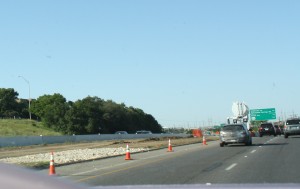 Construction begins on the express lane that will run northbound on Mopac. By Caroline Khoury.

“Because we are doing work on the highway, traffic for the period we’re operating will be not as optimal as when we started construction,” Pustelnyk said. “But hopefully everyone is keeping the end product in line so that in 2015 we do have a better Mopac that’s faster and smoother and has some options for getting past congestion when it does occur.”

In 2012 the Texas Department of Transportation named Travis County’s I-35 2nd in total annual hours of delay in the state and 2nd highest in annual delay cost. That’s 5.1 million hours of delay per year and $110.25 million spent per year on traffic delays alone. The Mopac Improvement Project hopes to change that.

The focus of the project is the addition of express toll lanes, which will allow drivers to largely bypass congestion. But Pustelnyk said these are not for everyday use; they’re for those days when you’re on a high priority trip and are willing to pay a decent amount of money to get there quick. The base fee is 25 cents for each leg (North and South), or 50 cents total; that fee increases based on the number of cars in the lane. 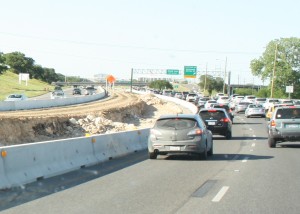 Construction on the express lanes. By Caroline Khoury.

“What we’ll be doing is analyzing traffic volumes and saying ‘Oh, we’re going to get congested here if we don’t start raising the price,’ so if we’re still getting congested we’ll raise it some more,” Pustelnyk said. “Essentially when we get to the point where people say, ‘Oh, that’s too expensive, I’m not going to use it,’ and we keep traffic flowing with the lane at full capacity but not congested, then that’s what the price will be. It’s being driven by the users.”

So as the lane gets congested, a computer that has been analyzing data will suggest a price, a human will confirm that price, and the toll rises. According to Pustelnyk, during rush hour drivers could be paying as much as $6 or $7 a trip; in the middle of the night, the toll will likely bottom-out at 50 cents.

Adding a toll road, however, can’t possibly solve the entire problem, at least according to Texas Alliance Group engineer Jeff Loskorn. Loskorn knows traffic; maybe that’s why his optimism is characterized by hesitation.

“This is not a simple problem nor does it have a simple solution,” Loskorn said. “There are too many people trying to use the highway system during rush hour. There’s no silver bullet to fix this problem.”

Still, the pros look great, on paper: drivers will have access to express lanes that allow them to bypass traffic, and Mopac will be more easily accessible with extra ramps downtown. The cons? Almost two years of construction, reduced speed limits on Mopac, confusing temporary lane striping, and a whole lot of noise. 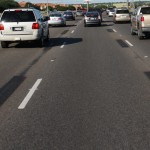 Temporary striping on MoPac that is the cause of existing traffic as well as the reduced speed limit. By Caroline Khoury.

In an effort to better connect with the community during what is expected to be a difficult and trying process for many Austinites – especially those that live in close proximity to Mopac – Pustelnyk has crowned himself the “Mopac Man,” a superhero-inspired motif that yes, does include a cape, and a hard hat.

“We knew it was going to be a challenge with a lot of interaction with the public, and we wanted to try and use people’s concerns a bit and take a light-hearted approach to what is going to be a challenging and difficult project,” Pustelnyk said. “We can’t solve all the problems out there, but we’ll do our best to help navigate construction on Mopac.”

Pustelnyk said they largely have the acceptance of the community that the project is moving forward. Complaints are expected, but minor. Austin resident Janie Leland commutes every day to and from Westlake for her nanny job, but she’s not necessarily one of the project’s supporters.

“I use Mopac everyday to get to work,” Leland said. “I go southbound so the construction doesn’t really bother me right now, but the more North I go the worse it gets. It’s kind of frustrating because I know it’s for a toll road, and I am not going to pay for a toll road once it’s built.”

The Mopac Improvement Project could be the answer to a large part of Austin’s traffic problem, but it seems the city will have to wait just a little while longer until any fruit comes from such an extensive undertaking.

← The Perfect Adjective for These Murals: Austintatious
West Campus Restaurants: Thrive or Die →