A Sister’s Fight for Justice 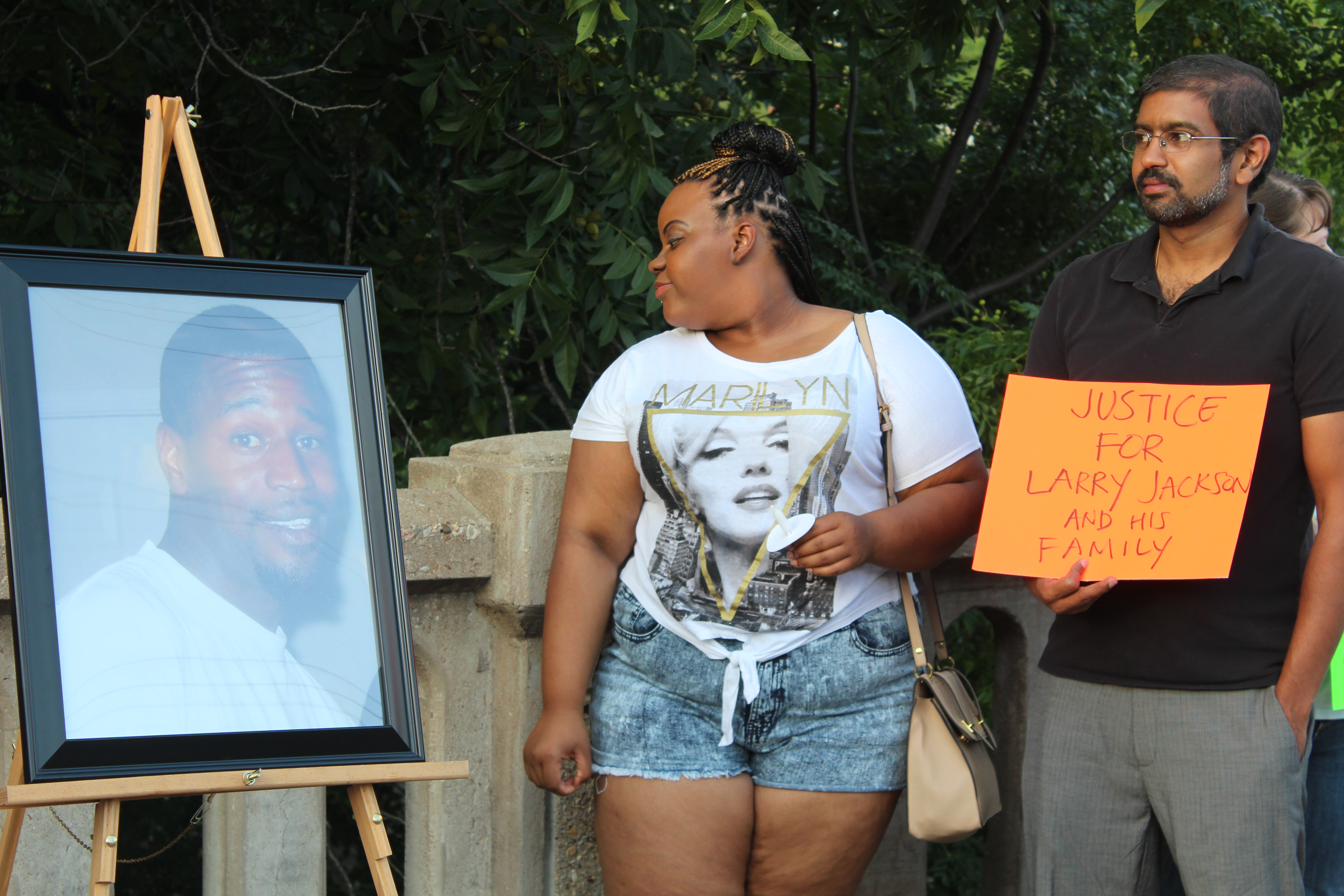 University of Texas Professor Snehal Shingavi and a friend of Jackson attend the memorial to show their support.

Holding candles, flowers and signs, members of the Austin community spilled onto the bridge crossing Shoal Creek and West 34th Street on Saturday.  It was the one-year anniversary of the fatal shooting of Larry Jackson Jr.

Lakiza Fowler, sister of Larry Jackson Jr., organized a memorial service for her brother on the bridge overlooking the place where Jackson was killed.  Long-time friends and family of Jackson attended the memorial, including his three children who traveled to Austin from their home in Mississippi. 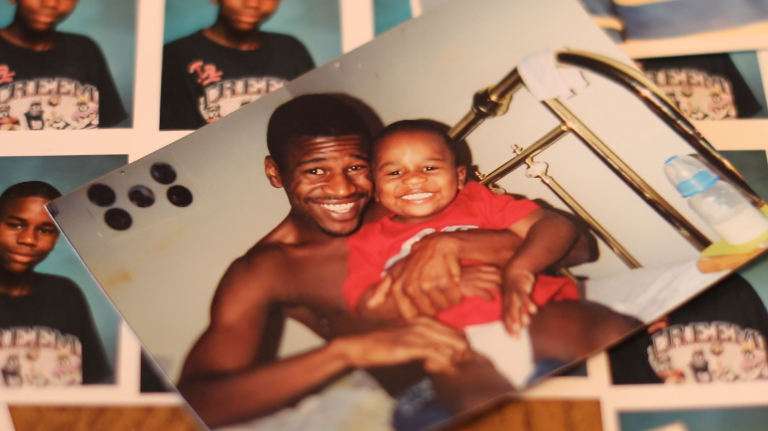 A photo of Larry Jackson Jr. holding his oldest child.

“The now ex-detective felt the need to play the part of the judge, jury and executioner on that day,” Fowler said during her speech at the memorial. “And because of his unjust judgment and condemnation, we are left here to try and pick up the pieces after such a tragedy.”

Exactly one year ago, Detective Charles Kleinert chased Jackson from the scene of a bank robbery at Benchmark Bank on West 35th Street. After the robbery, Jackson approached the bank and according to Kleinert, Jackson had acted suspiciously. When the officer attempted to question Jackson, Jackson fled from the scene. Kleinert followed him, commandeering a civilian car along the way. 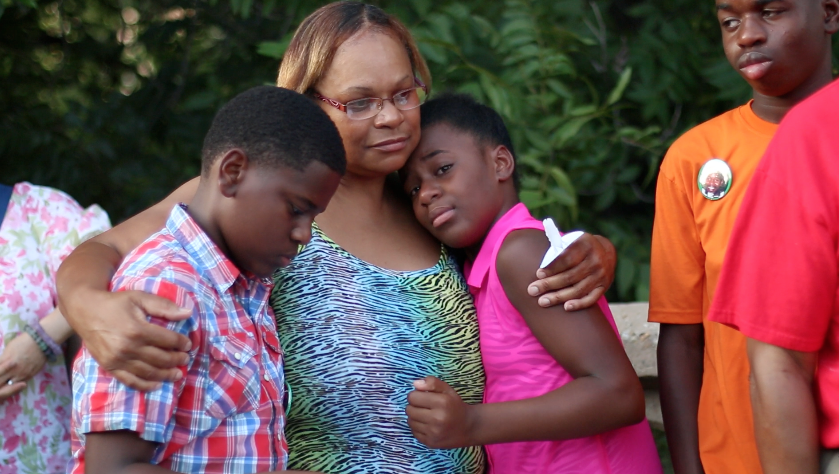 The chase ended underneath the bridge on West 34th Street. Jackson lay dead in the riverbank, having been shot in the back of the neck by Kleinert.

According to the officer, his weapon misfired.

“To say directly to [Kleinert], I hate you for what you did. I hate your actions, because your actions have caused an entire family to grieve to the point where, like I said, I don’t even know who I am anymore,” Fowler said during an interview.

At a town hall meeting in response to the shooting, Fowler met Lucian Villaseñor, a local activist and member of the anti-police brutality group the People’s Task Force. The group had formed in the aftermath of a Florida case where George Zimmerman, a neighborhood watchdog, was acquitted after murdering an unarmed, black teenager, Trayvon Martin.

With the support of the People’s Task Force, Fowler embarked on a campaign to initially fire Officer Kleinert from the Austin Police Department. Fowler said she knew immediately after Jackson’s death that she wanted to fight for justice.

“I knew deep in my heart that this was my little brother and I wasn’t able to protect him from this rogue cop,” Fowler said. “I knew I wanted to do something about it. I just didn’t know how to get started, where to get started or what to do.”

After Kleinert’s retirement, the People’s Task Force redirected their efforts toward securing a Travis County grand jury indictment of Kleinert on charges of murder. Villaseñor said Keinert’s retirement before the completion of an internal police investigation reflected a systemic issue of racism and police impunity. 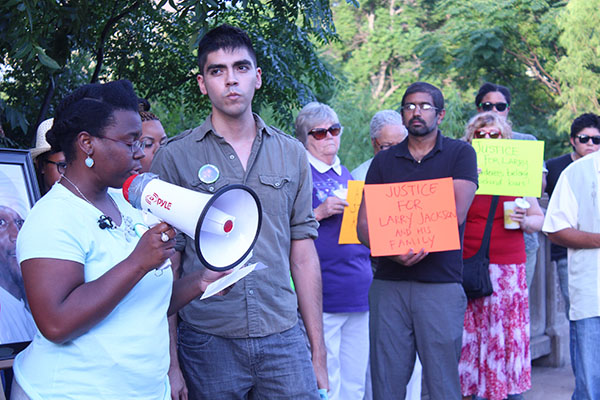 “If you kill a person of color in Austin, you can retire and get your pension,” Villaseñor said.

Snehal Shingavi, an assistant professor of English at the University of Texas at Austin and attendee of the memorial, said he believes the Jackson case was a result of systematic racial profiling in police departments nationwide.

“When you look at who is arrested, who is put in prison and who is shot by the cops, you see a racial bias in the outcome of police actions,” Shingavi said.

After months of petitioning and rallies, the grand jury indicted Kleinert on manslaughter charges on May 12. If found guilty, Kleinert could serve up to 20 years in prison and pay a fine of up to $10,000.

“This man needs to serve time for what he did to my brother,” Fowler said. “And the charge needs to be stepped up to murder because that’s exactly what he did.”

The last indictment of a police officer for a fatal shooting was in 2003, when Officer Scott Glasgow was indicted on charges of negligent homicide for the killing of 20-year-old Jessie Lee Owens. Four months later the charge was dismissed.

While the indictment was a victory for the Jacksons family’s months-long campaign, Villaseñor said they would still have to fight another uphill battle to convict Kleinert.

“At any point along the way, the District Attorney [Rosemary Lehmberg] can throw out the case or offer [the officer] a plea deal and let him get off scot-free,” Villaseñor. “That’s why some of our demands have been that we want her to set a court date and follow through and not delay.”

Fowler said she would continue to fight for a conviction even if the case is thrown out.

“I’m going to continue until my last breath fighting not only for Larry, but for all the other injustices that have happened,” Fowler said.