Up, Up, and Away: Austin Cosplay Community Takes Off 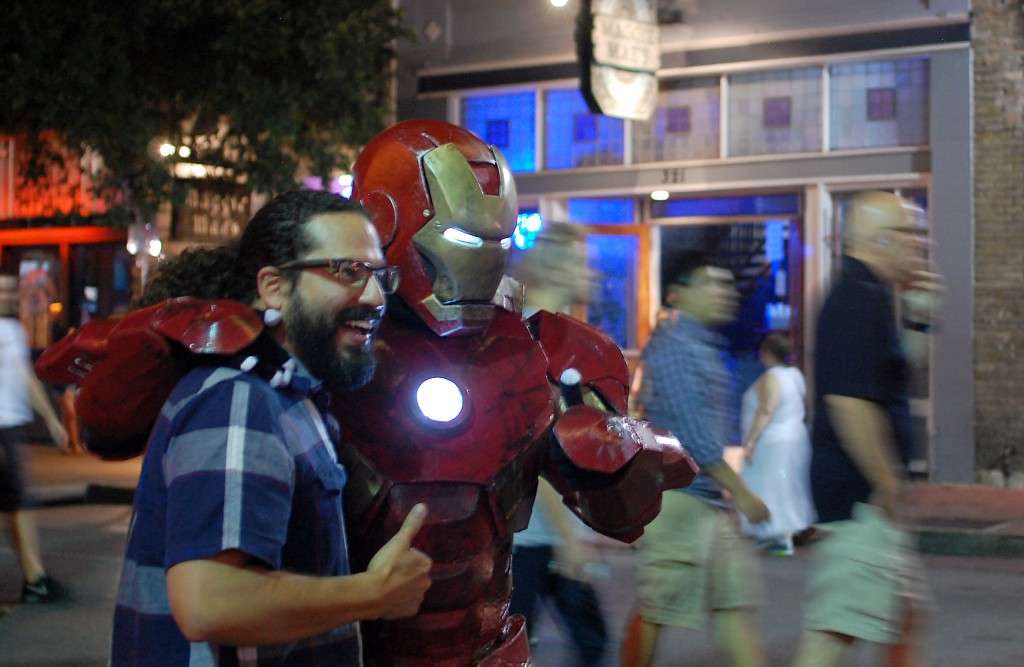 Cosplayer Albert Lee, suited in his Iron Man costume, takes a photo with a fan in the middle of Sixth Street. Photo by ChinLin Pan.

When Arcy Ward steps out in her new outfit, people will stare. As she walks down the sidewalk, some may take pictures. She just smiles when this sort of thing happens because she knows she looks good.

After all, her top made of black pleather and gold trim is certainly eye-catching. She matches the look with velvety maroon cutout pants. To pull it all together, she handcrafted silver and red skull knee pads and the matching necklace and belt buckle.

“You get the strangest looks from people,” Ward said. “Also some good reactions, too. It’s kind of part of the fun in being in costume. That you can go around and kind of freak out some people who weren’t expecting you.”

No, Ward isn’t joining a metal band. She is a cosplayer.

Cosplay is costume play. A person dresses up as a character from any of their favorite works. Popular choices come from anime, manga, role play games, and comic books. Costumes are often handmade and then worn to conventions. 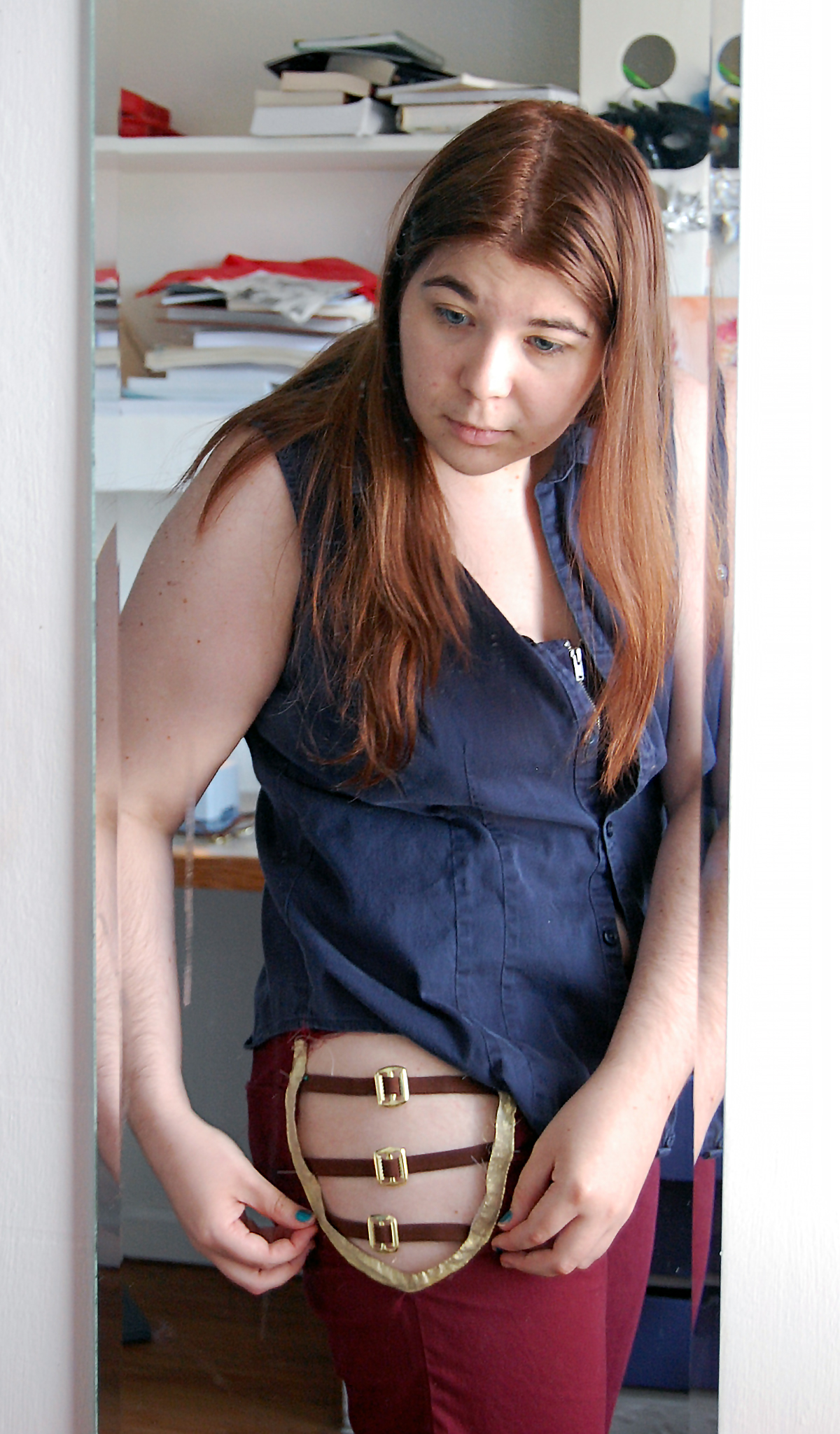 Ward adjusts the straps on the pants of her costume. She spent eight hours a day for a week, customizing, and creating her costume. Photo by ChinLin Pan. 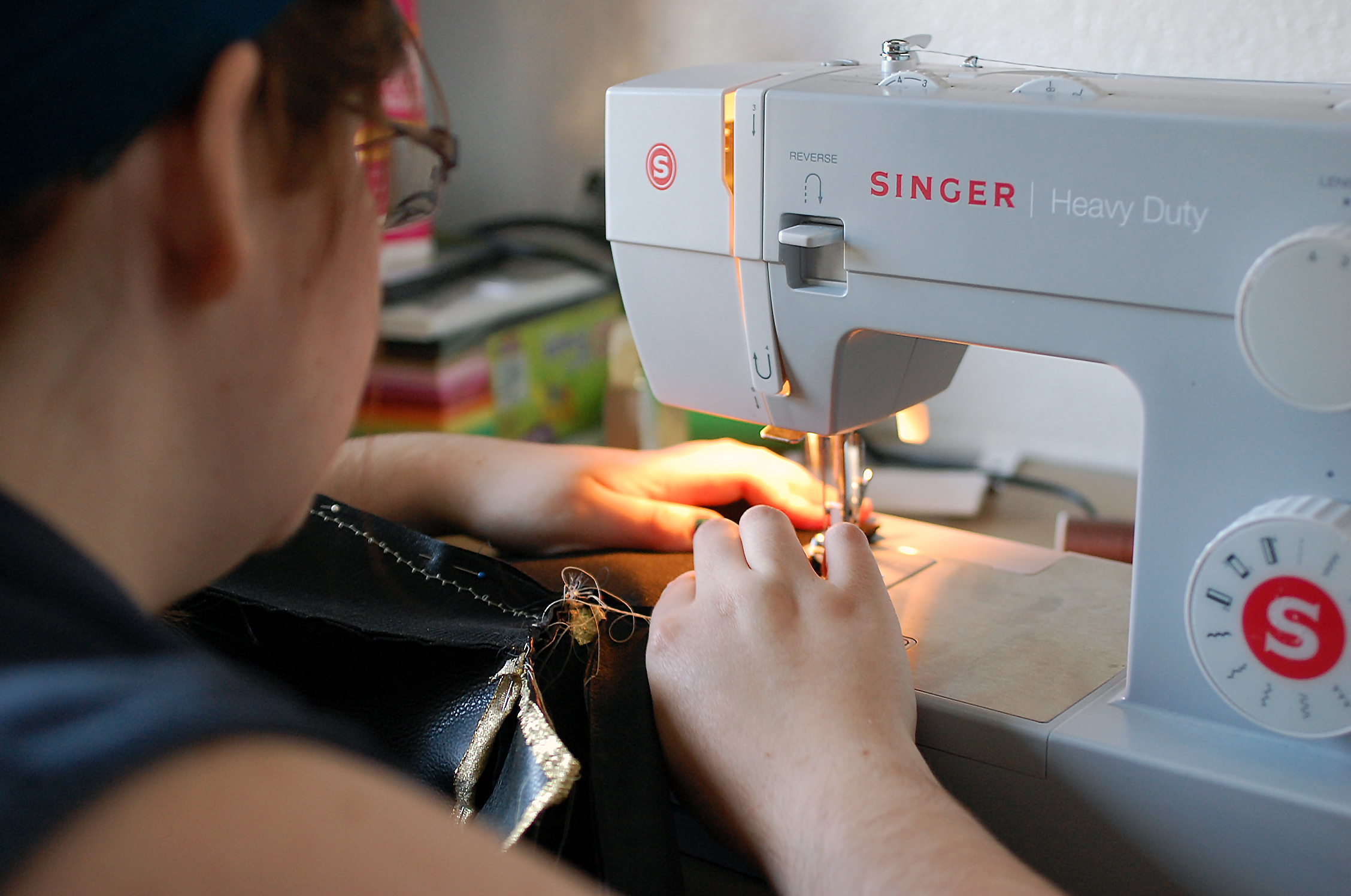 Ward is sewing her leather jacket together. To create her jacket, she had to use 120 pins just to get everything in place with proper ribbons. Photo by ChinLin Pan. 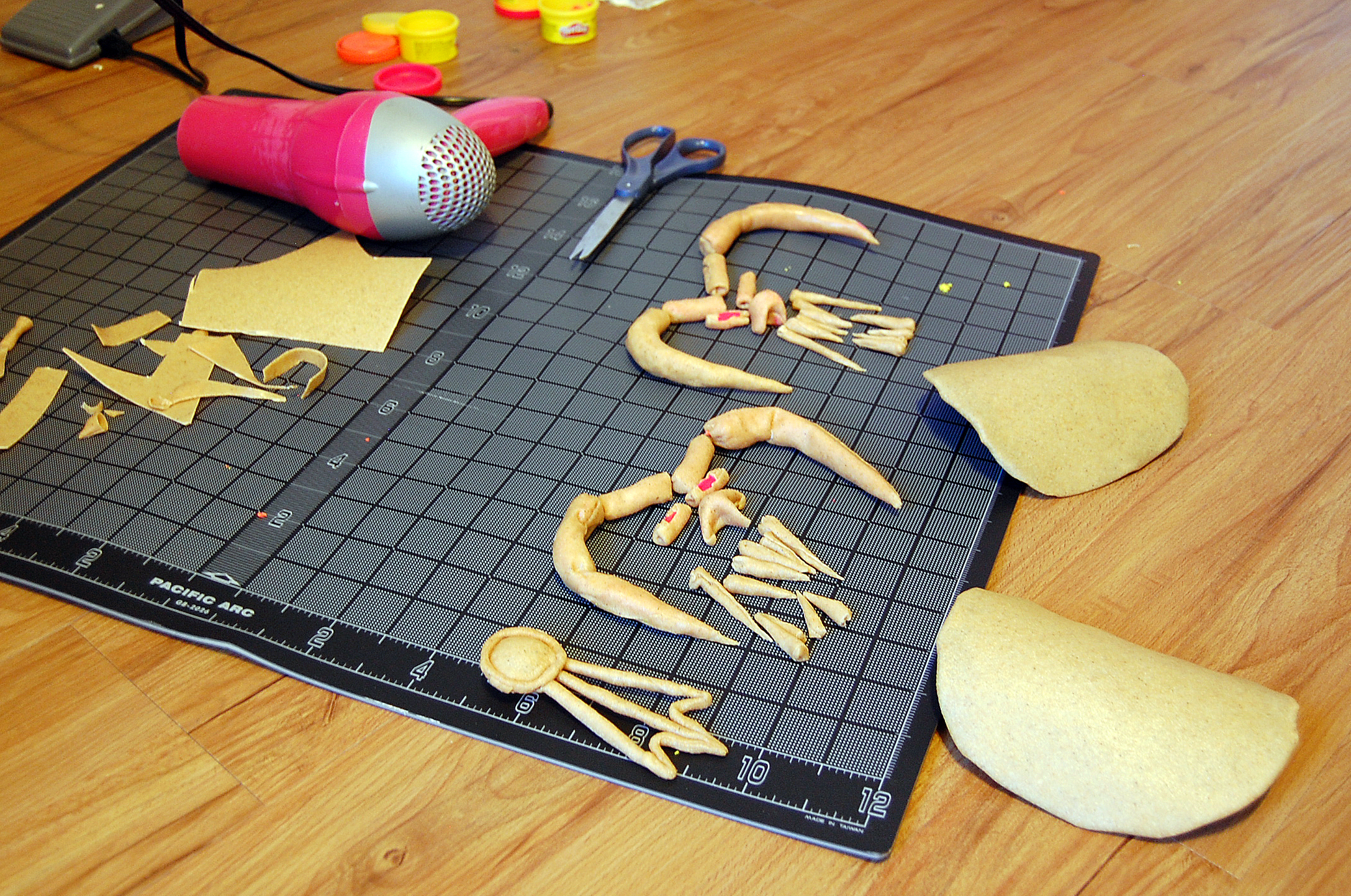 Ward used worbla molds to create her accessories, her necklace and kneepads. She molded the worbla and then used her hair dryer to keep all of the materials in place. Photo by ChinLin Pan. 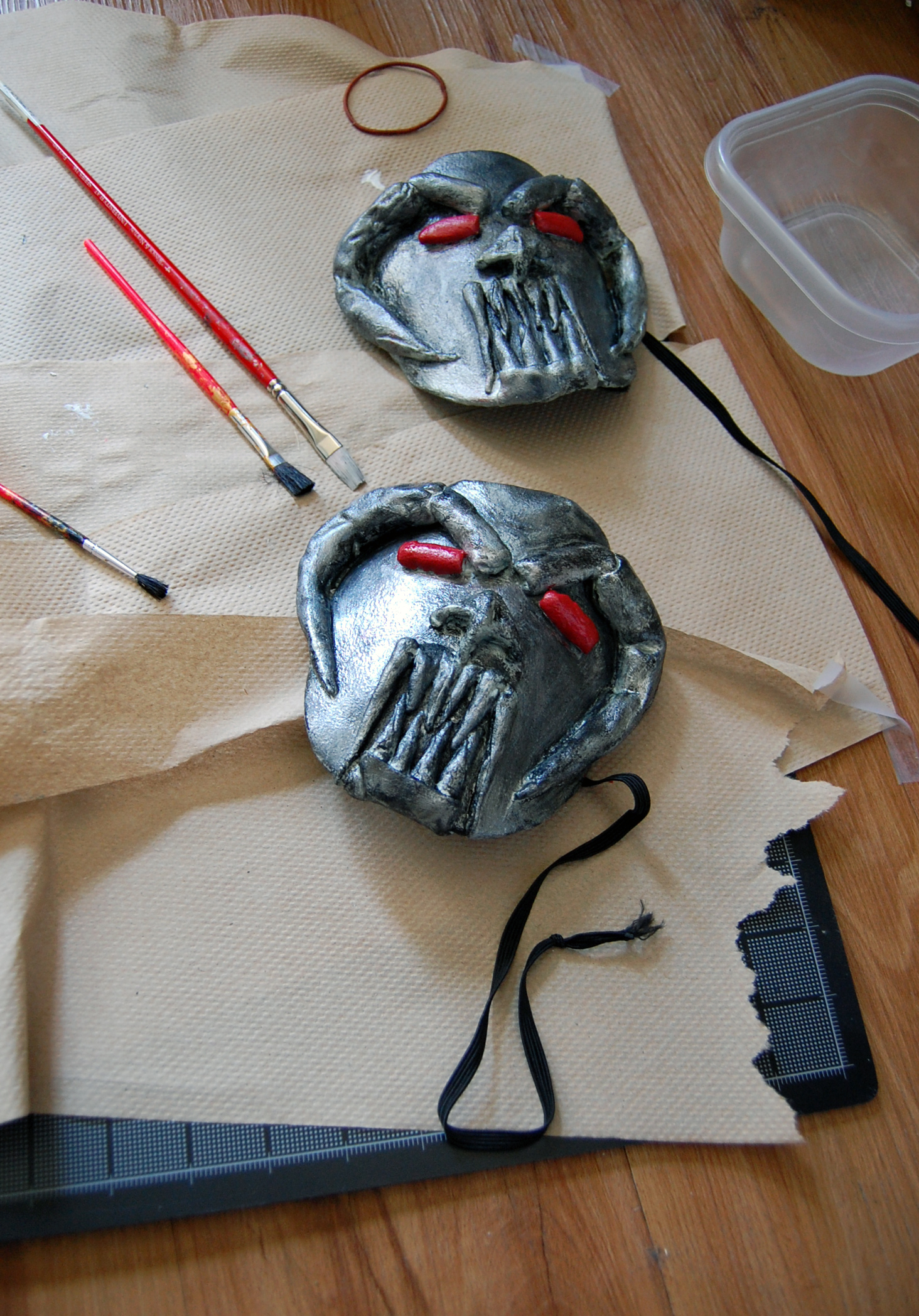 Ward finished painting and priming her silver and red metallic skull knee pads. These accessories are made out of worbla, a thermoplastic that Ward cut up and molded in shape. Photo by ChinLin Pan. 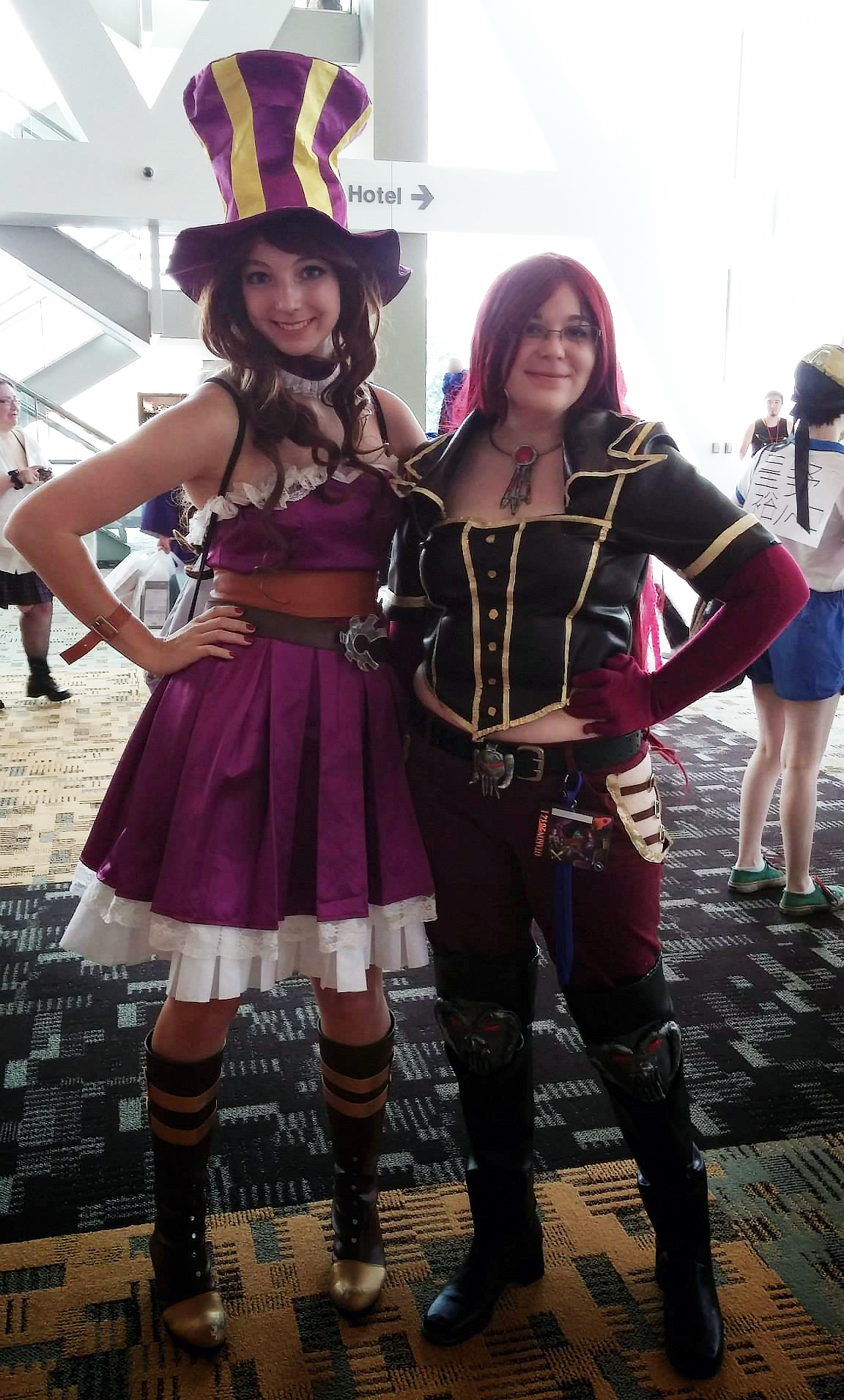 Ward poses with another fellow cosplayer at Otakon in Baltimore. She stands tall and proud as she showcases her High Command Katarina costume. Photo courtesy of Arcy Ward.

“I’ve actually had to use a lot more complicated materials than I have previously when I was making it,” Ward said. “I have pleather for the top and I have probably had to use a good 120 pins just to get everything in place with proper ribbons and everything. I have suede belt buckles that I made by hand.”
After working on her costume at least eight hours a day for a week, Ward traveled from Austin to Baltimore to debut her costume at the Otakon anime convention from Aug. 8-10. 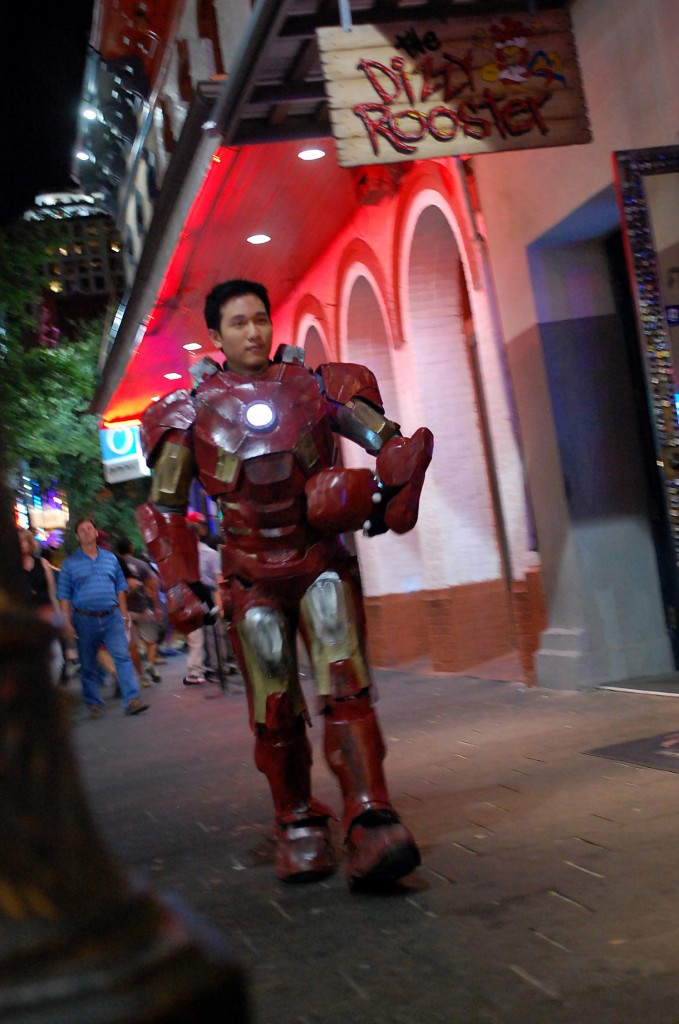 Lee often suits up as Iron Man to take photos with people on Sixth Street, meet up with other cosplayers, and score free drinks. Photo by ChinLin Pan.

“At various conventions, it’s like a con family where you see the same people a couple times a year,” Ward said. “You can meet other people too if they are cosplaying something from a series you like. It’s an instant friend. You can just go up to them and talk to them about the series.”

But conventions can cost hundreds of dollars to attend.

Cosplayer Albert Lee says the trouble is finding a balance between the cost of costume materials and the price of admission into events to display them.
“I have only been to Ikkicon and South By Southwest sadly,” Lee said. “It’s like the great paradox of cosplaying. You always have ‘X’ amount of time to finish a cosplay, and then you have so little time to go to these convention. And then you have all this money you dumped into the costume, you don’t have enough money to purchase tickets for conventions.”

Lee has poured thousands of dollars into creating his costumes.

“The most amount of time and money I have put— that costume would probably be my Iron Patriot suit,” Lee said. “That one cost me 1.5K of my own dollars to put into. A lot of that went into electronics and such.”

As a result, he chooses to showcase his work weekend nights on Austin’s famous Sixth Street. These days he’s sporting an Iron Man costume made of foam, yoga mats, and various electronic parts.

“Recently I started walking downtown,” Lee said. “My other friend—he dresses up as either Boba Fett and Mecha Spawn—we walk around downtown, and take pictures with people and it’s fun. People get us drinks and stuff, so it’s always a great experience.” 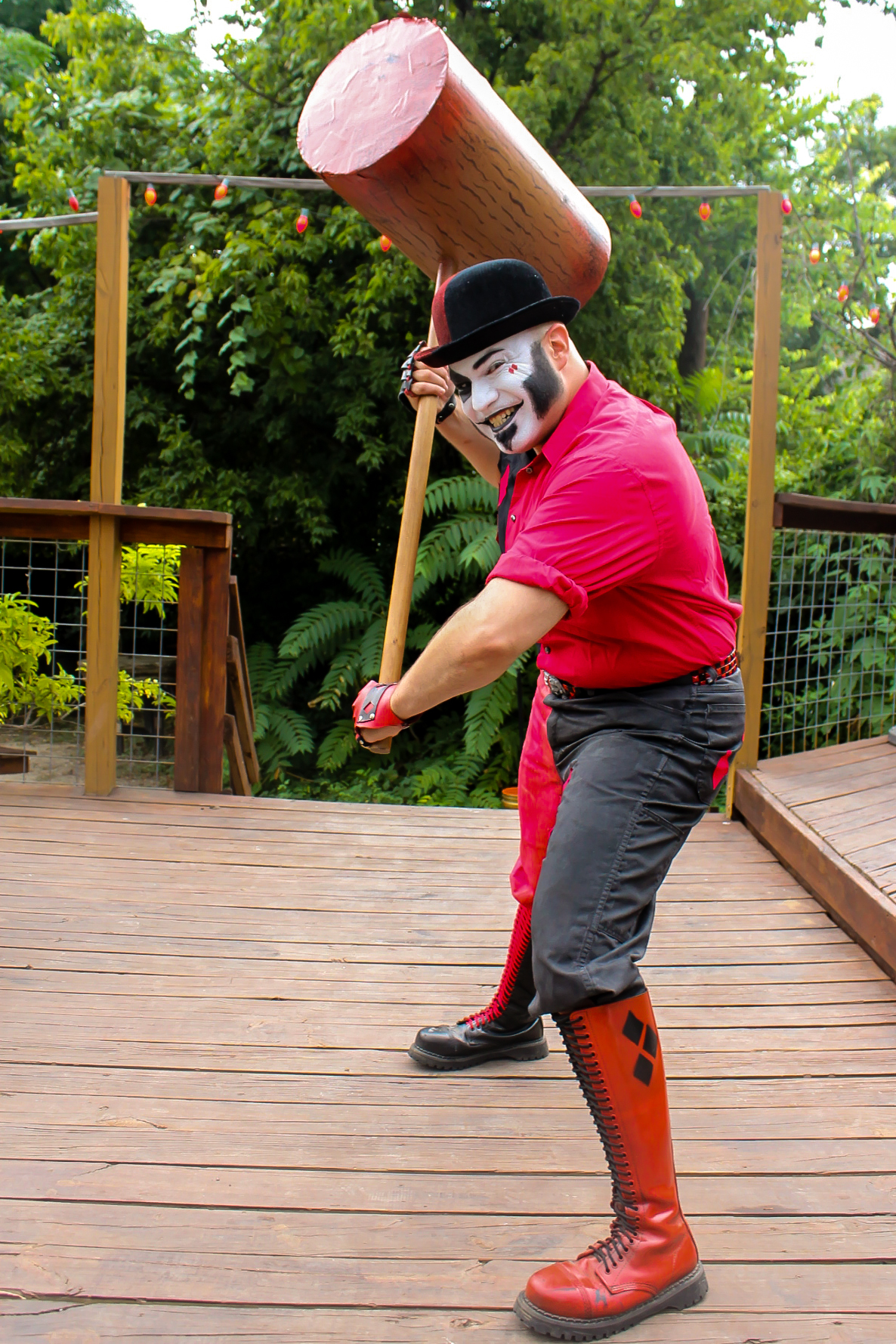 Cosplayer Justin LaVergne poses in his male Harley Quinn cosplay costume. LaVergne is the host of The Vortex Coplay Expo from Aug. 10-17. Photo by Barbi Barbee. 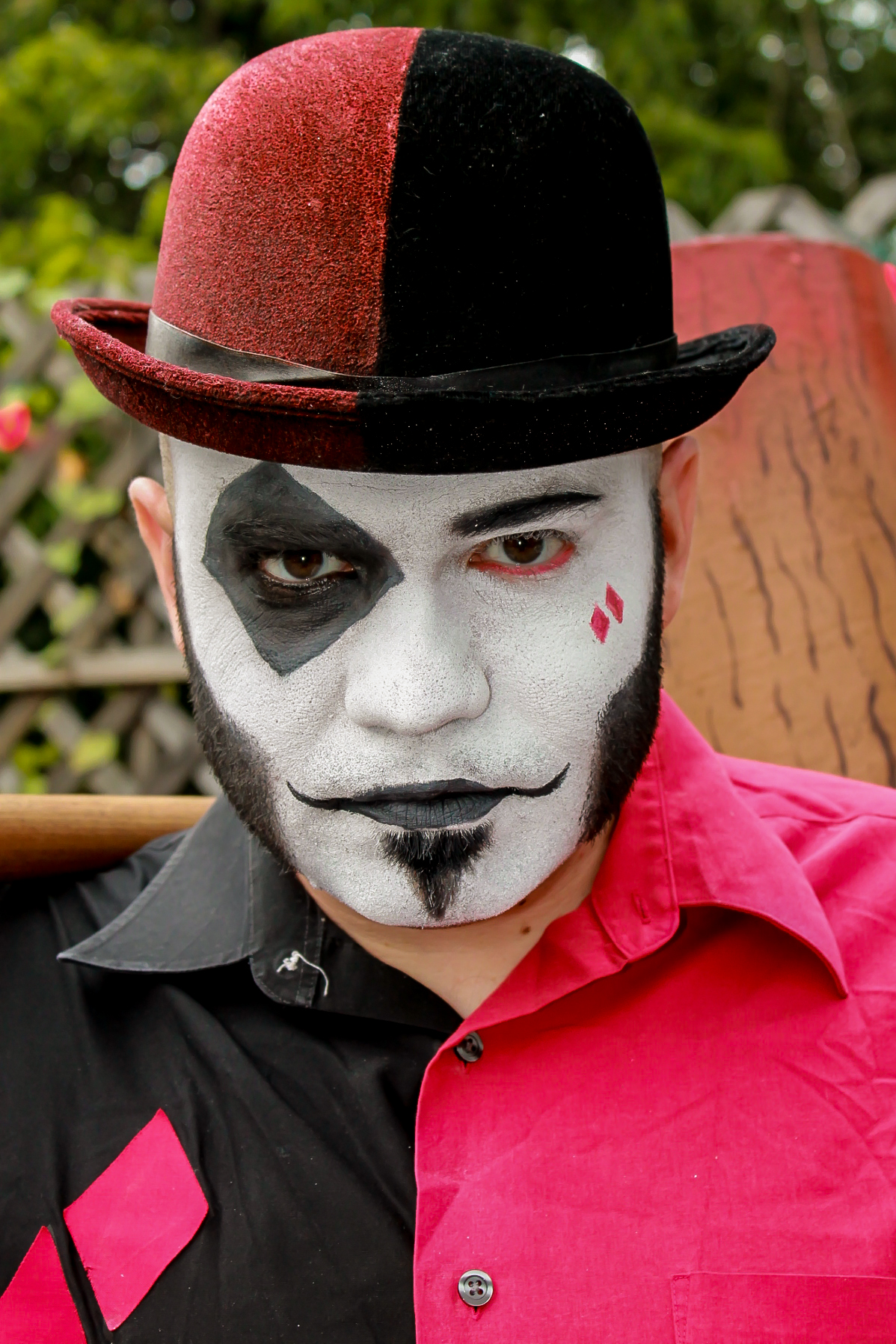 LaVergne hopes the expo will bring the Austin cosplay community closer together so they can learn skills from each other and have a support network. Photo by Barbi Barbee. 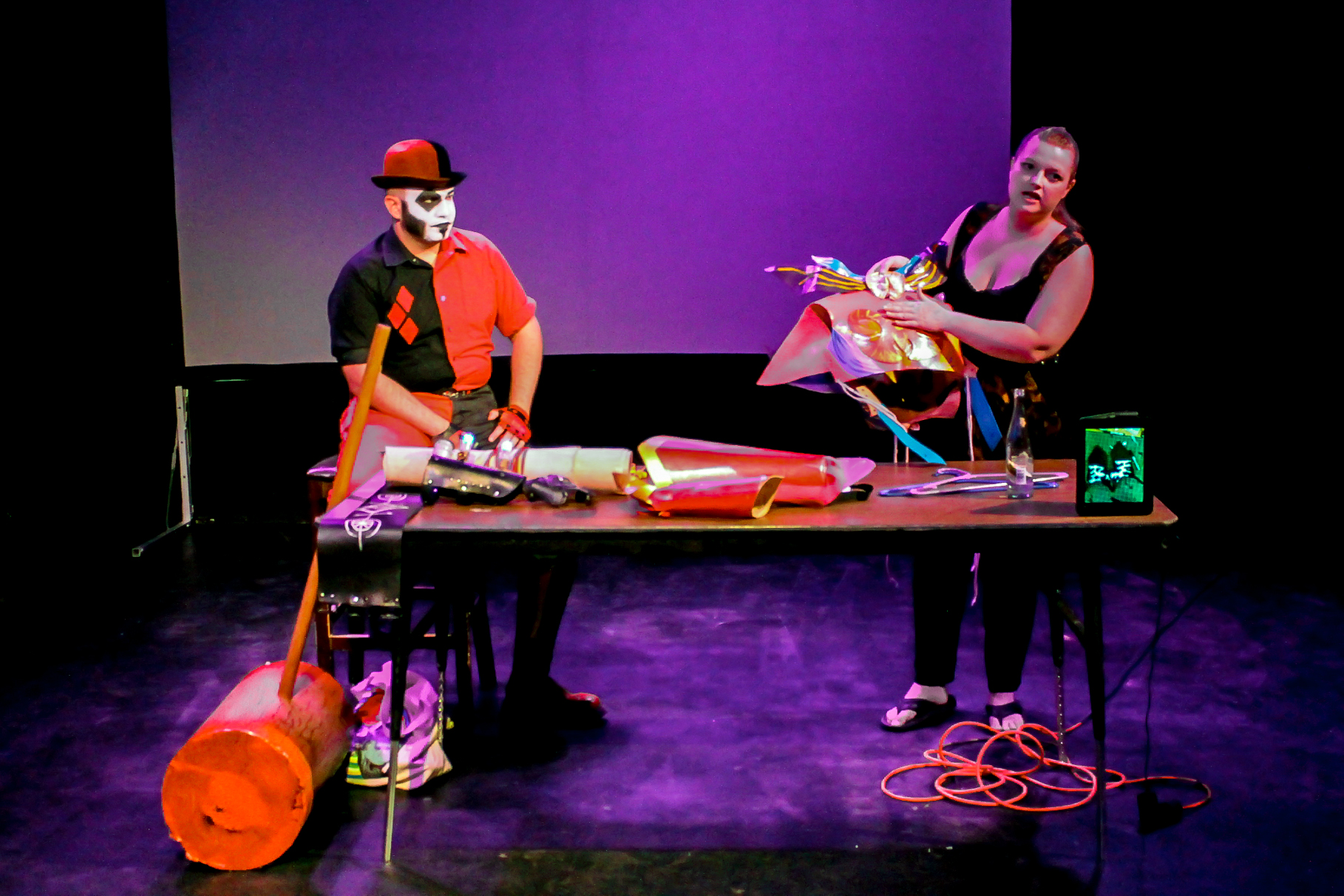 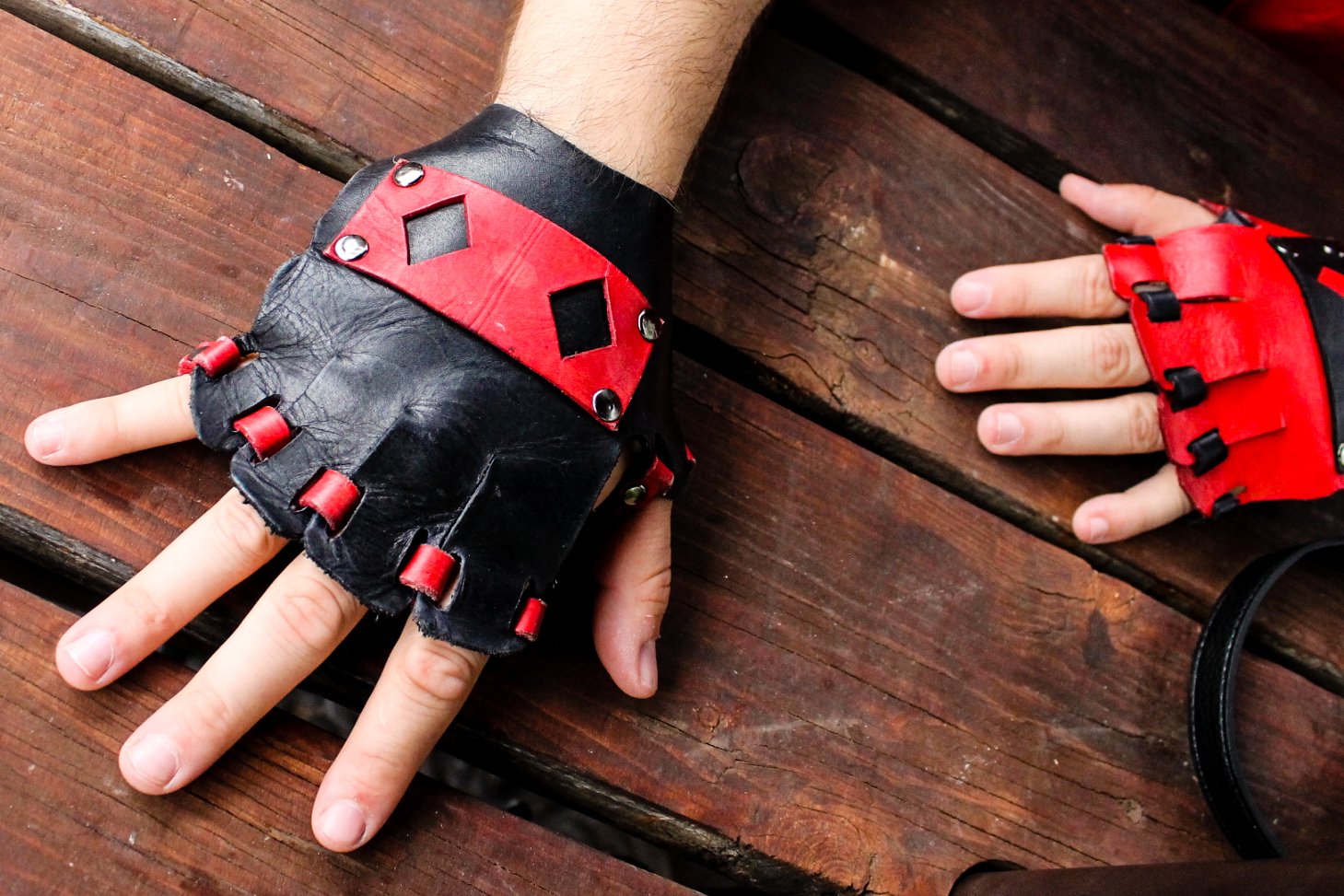 LaVergne created his gloves out of leather and metal rivets. He has created several leather pieces for his costumes as part of the Vortex Repertory Company. Photo by Barbi Barbee.

Austin will host a Cosplay Expo at The Vortex theatre and bar. Cosplayer and host of the event Justin LaVergne hopes to draw in cosplayers from all over Austin and create a greater sense of community in the city.

“Austin’s cosplay community is a little more spread out than other places like Dallas and Houston and San Antonio,” LaVergne said. So we’re trying to bring things things together, because if we get together we can help each other. Because everyone has a different skill set. And if we can get all of these people together, that can boost everybody’s ways of making cosplay.”

As an experienced cosplayer, LaVergne says the best thing about it is the social world it opens up to people.

“Cosplay allows them to be more of themselves, be more social,” LaVergne said. “Wearing a costume is like wearing armor. Seeing someone that’s from the same anime or from the same comic as you, and being able to go up to them, because you have something, that you can see physically that you have something in common with this person. It’s a lot easier to talk to them.”