Song after song, Bill Holden exercises his polka and waltz skills with a new partner. He’s been dancing for 47 years, and here on the dance floor he’s in his element. Holden wears a name tag identifying him as a Wurstfest Grosse Opa, a honorary title that the Wurstfest Association gave him last year for his loyalty, dedication and willingness to participate.

Clad in a green Bavarian hat dotted with pins, a red vest and lederhosen, Holden may seem hard to miss. But his appearance is far from unique in the beer garden. 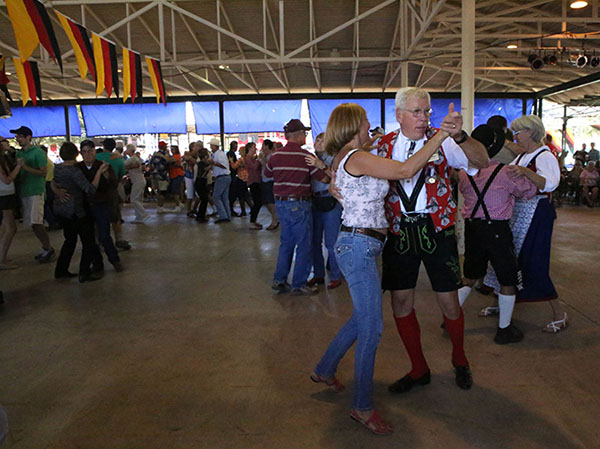 Dancers crowd the floor as live polka music fills the beer garden at the Oktoberfest Festival on Oct. 4 in Fredericksburg, Texas. Wurstfest Association member Bill Holden first began dancing in the seventh grade, when his parents sent him to the Arthur Murray Dance Studio located in Austin, Texas.
Photo by Larisa Manescu.

On October 3-5, the weekend of the Oktoberfest festival in Fredericksburg, Texas, over 20,000 people showed up for the 34th celebration of German-Texan heritage and culture. People of all ages donned traditional dirndls and lederhosen, and there was no shortage of beer waiting for them. But the annual festival represents more than an opportunity for excessive drinking.

In addition to dancing to a variety of live bands at one of the three beer gardens, activities at Oktoberfest include stilt walking, indulging in traditional German dishes like bratwurst, potato pancakes and schnitzel, and participating in a stein-holding competition. There’s also a carnival area for the children, and various local artisans and food vendors put their products on display in tents. 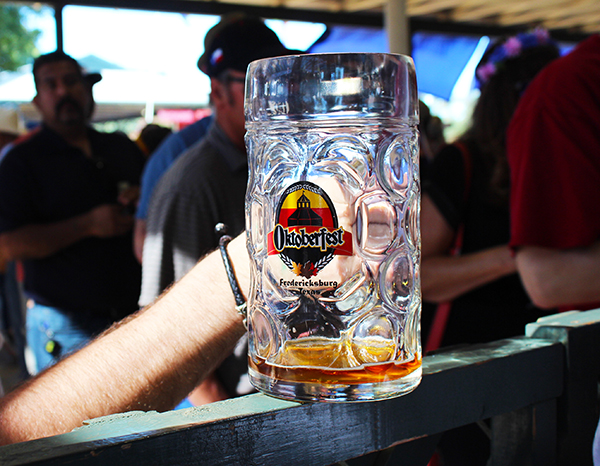 While some attendees may be curious first-time visitors to the festival, many have significant ties to the German heritage community in Texas.

Festival attendee Gene Hackemack has been playing German and Czech music since the late 1970s. His business card is labeled “Gene Hackemack’s Oompah Musik” and states, “Have Squeezebox [Accordion] – Will Travel.” While plays at a variety of German and Czech festivals like Oktoberfest, and he has the right background for it. His great-great grandfather arrived in Galveston, Texas from Germany on June 4, 1854, and his family spoke Texas German, a dying dialect, until the 1960s.

Hackemack also claims membership to a variety of German cultural groups, such as the Winedale German Singers, the Texas German Society and Hermann Sons, a fraternal insurance organization that was exclusively for the early German settlers in Texas but is now open to anyone who wants to join.

It is not uncommon to walk up to an Oktoberfest attendee and discover that he or she is heavily involved in a German band, organization or another Oktoberfest festival occurring in Texas. For example, several committee members involved with the planning of Wurstfest, a 10-day celebration of German culture in New Braunfels, Texas in November, frequent Oktoberfest in Fredericksburg in their outfits. 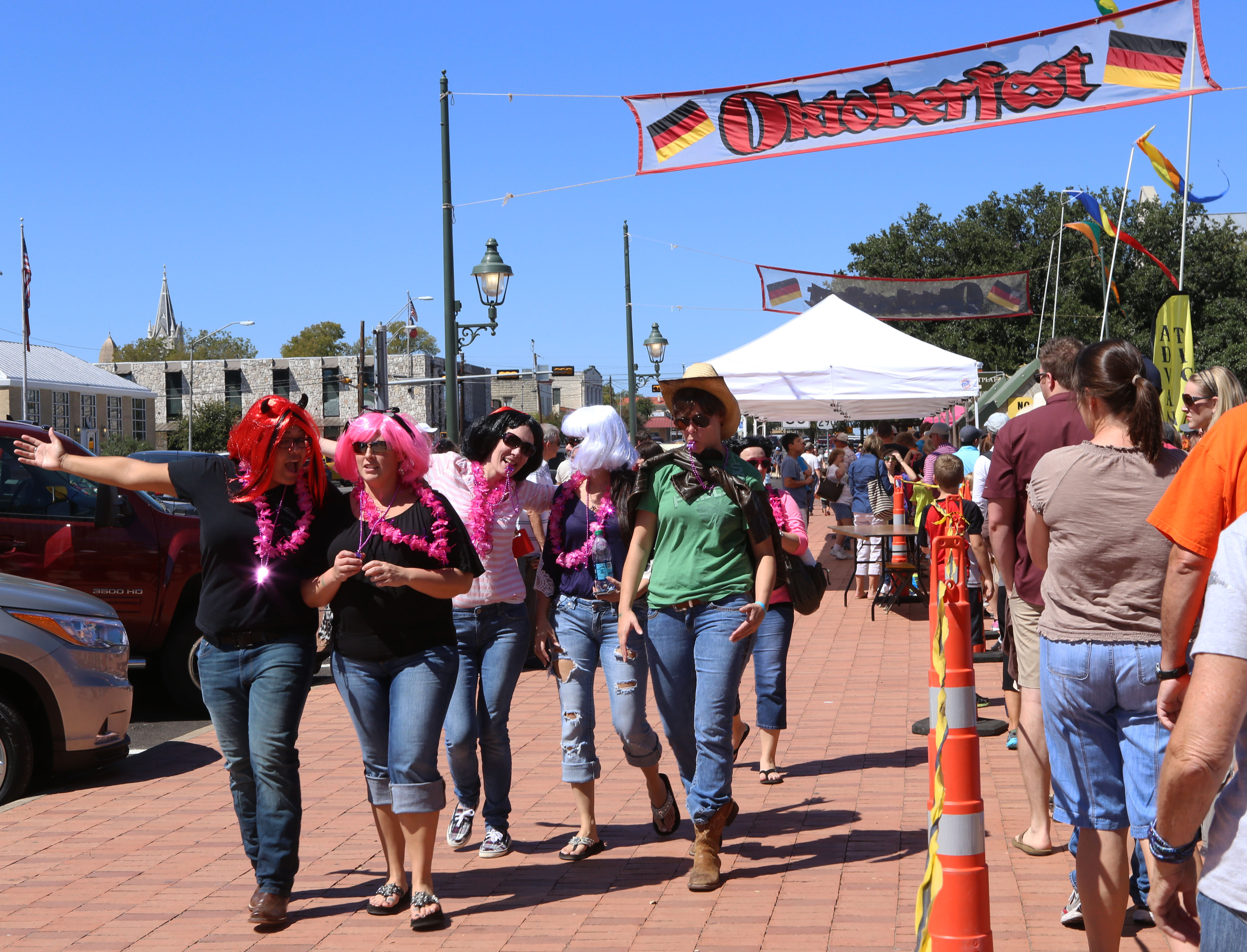 Each year, Oktoberfest in Fredericksburg brings together people from all over the state interested in a weekend of celebrating and indulging in German-Texan culture. From veterans to first-time visitors, the festival draws in a diverse crowd. Photo by Larisa Manescu. 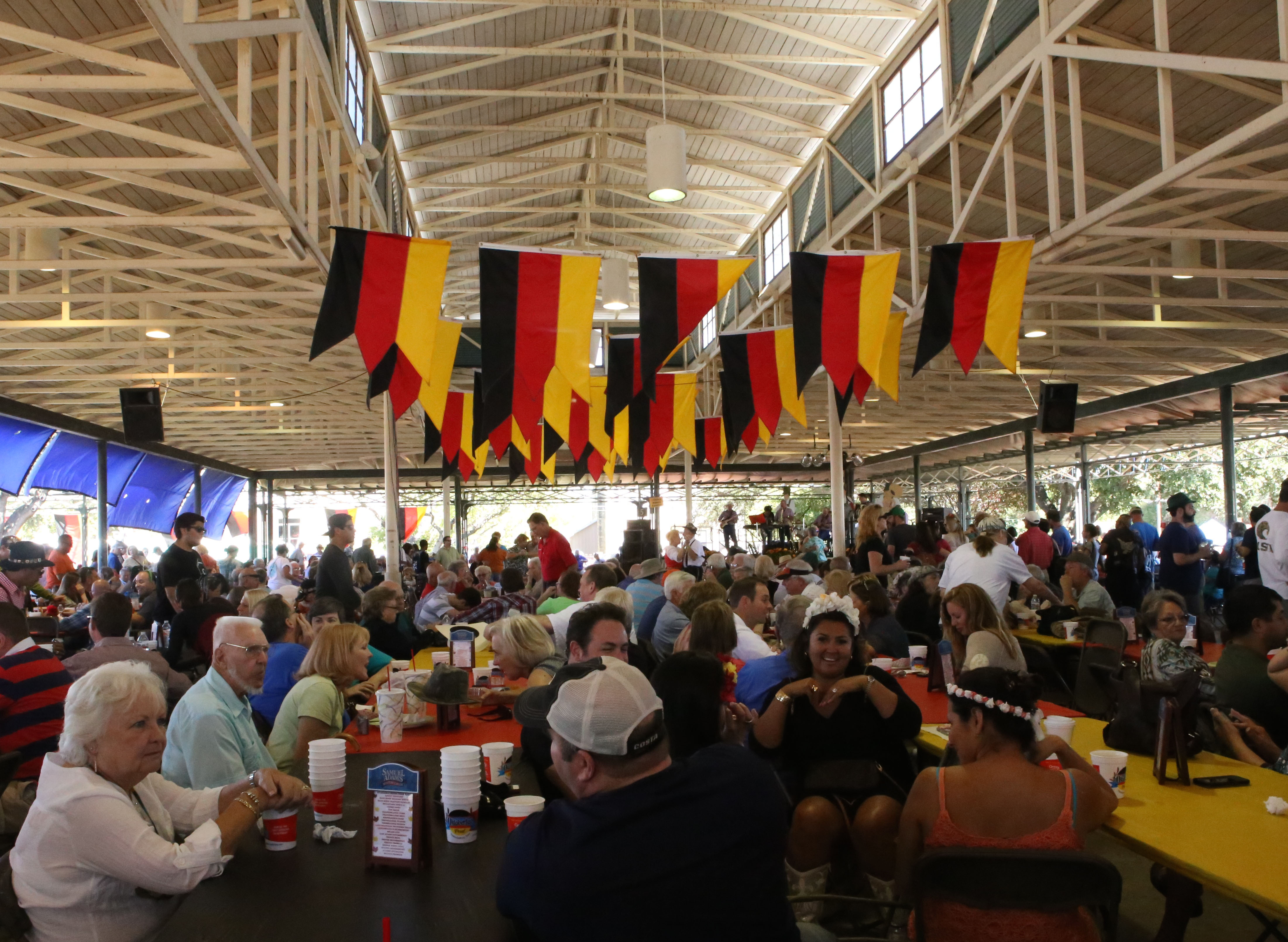 This biergarten (beer garden) is the largest of the three pavilions in the Marketplatz (marketplace) where the Oktoberfest event is held. Seeking refuge from the blazing Texas sun, festival-goers convene to drink, socialize and dance. Photo by Larisa Manescu. 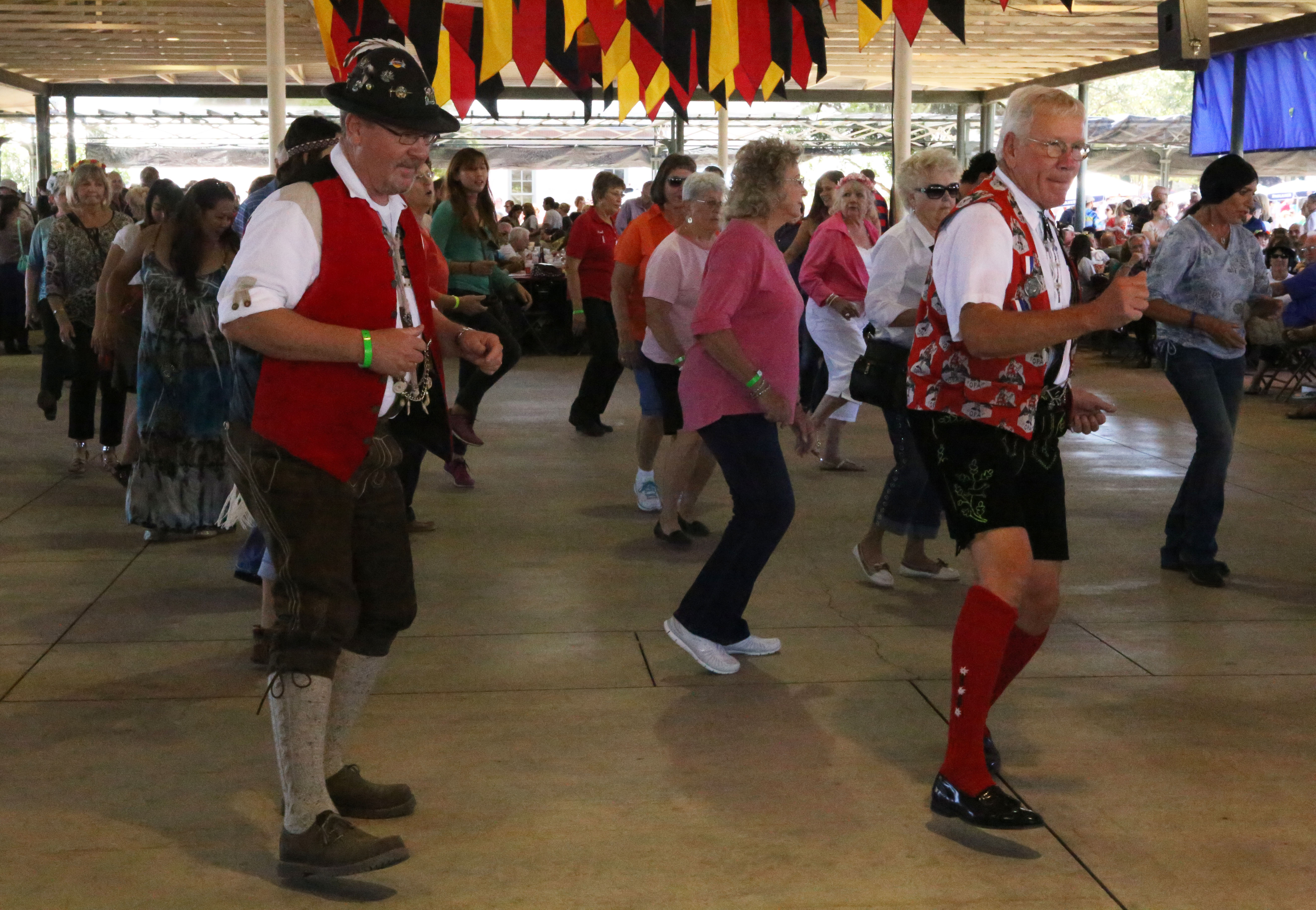 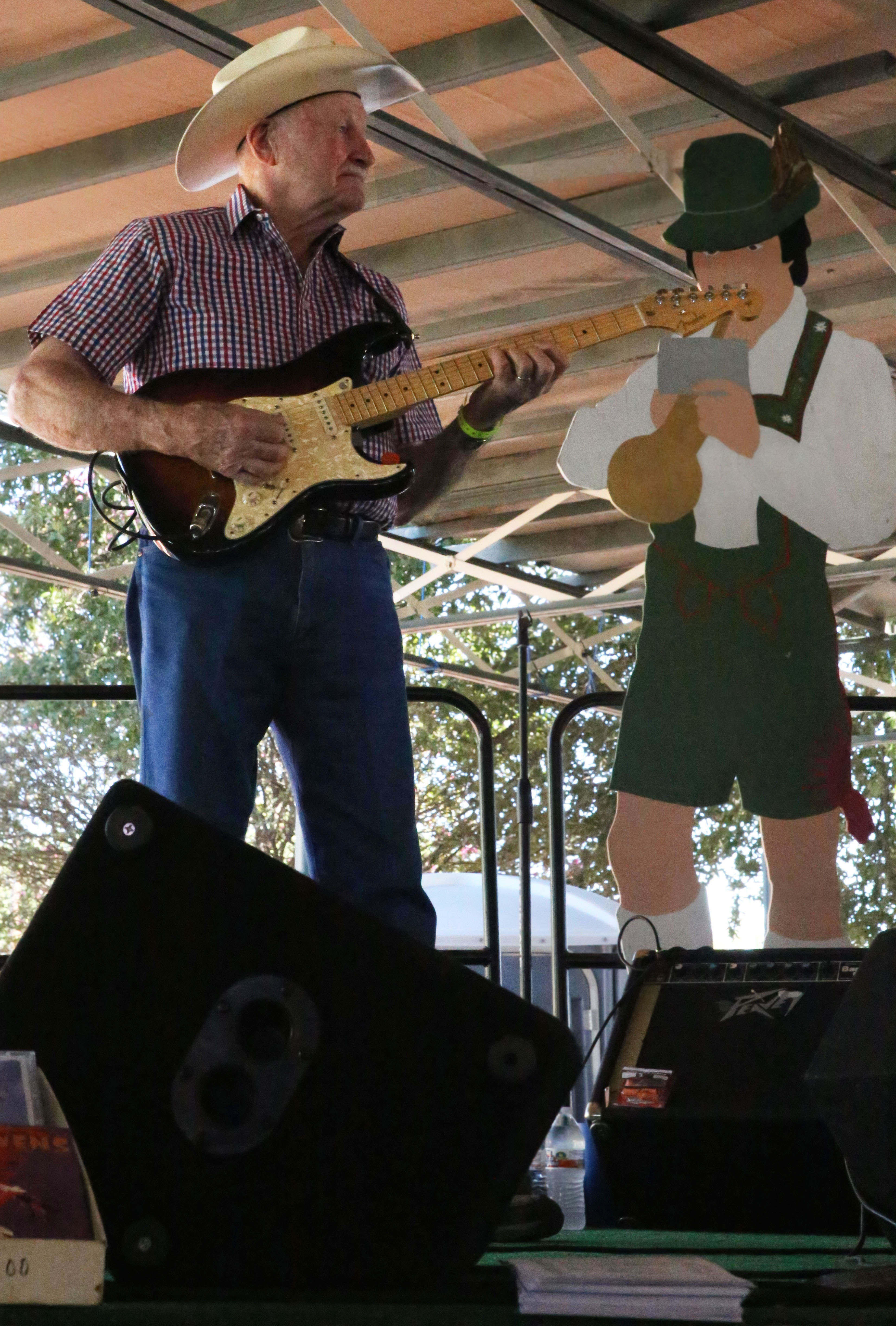 IMG_1332
Milton Wagner plays lead guitar for The Red Ravens, a folk, polka and Czech band that was first founded in 1969. Although the current leader is the only remaining member of the original band, The Red Ravens are still actively book more than fifty gigs each year. Photo by Larisa Manescu. 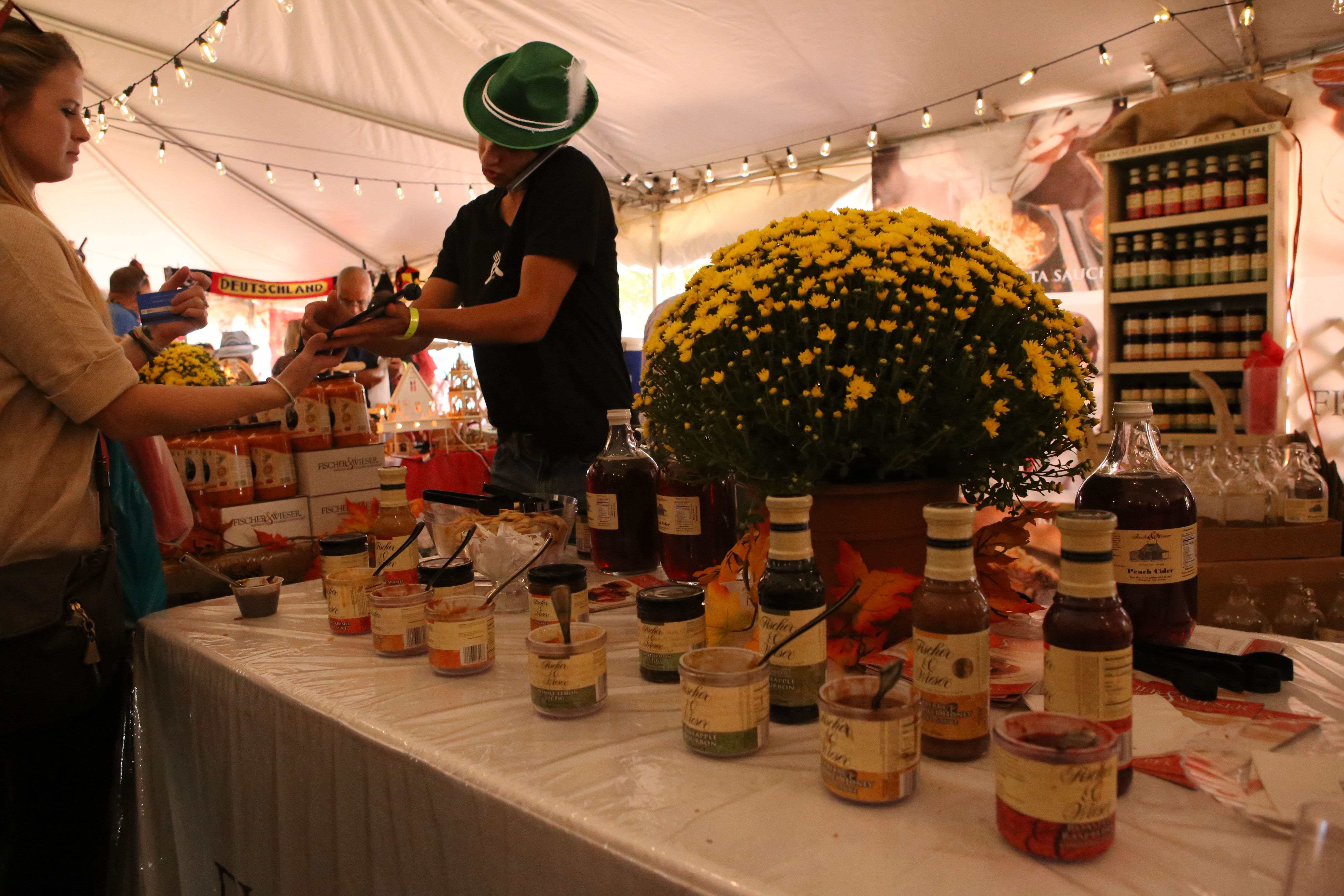 A booth offers free samples of Fischer and Wieser jellies, jams, salsas and peach cider. The local Fredericksburg company has its products available in stores around the United States. Photo by Larisa Manescu. 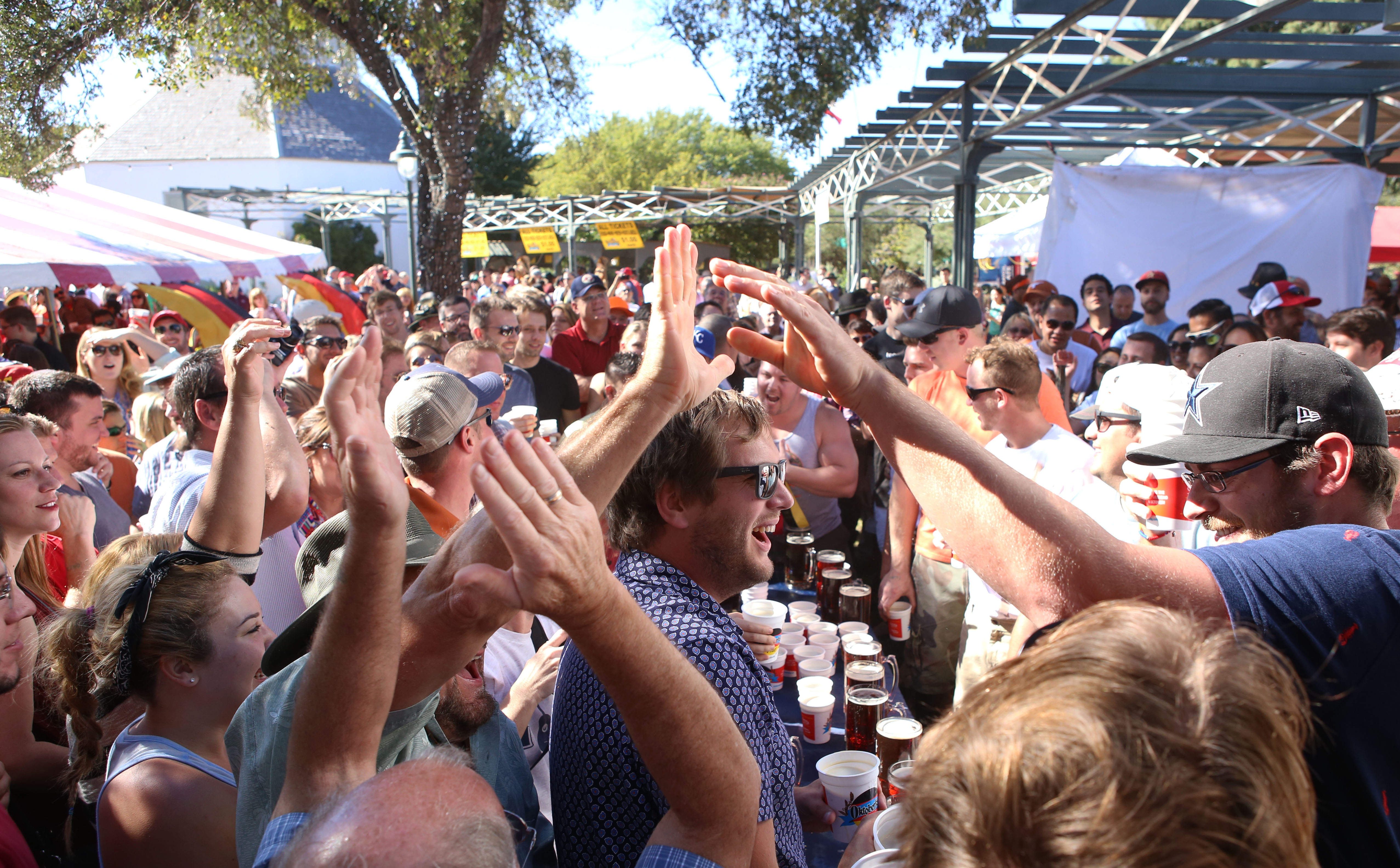 Participants celebrate after a stein-holding contest, in which teams separated by gender compete to see who can hold a 5 lb stein of beer for the longest amount of time. Certain guidelines exist: the beer cannot spill, the arm must be straight and leaning of the back is prohibited. The winner receives a stein, but all participants get a free cup of beer as a consolation prize. Photo by Larisa Manescu 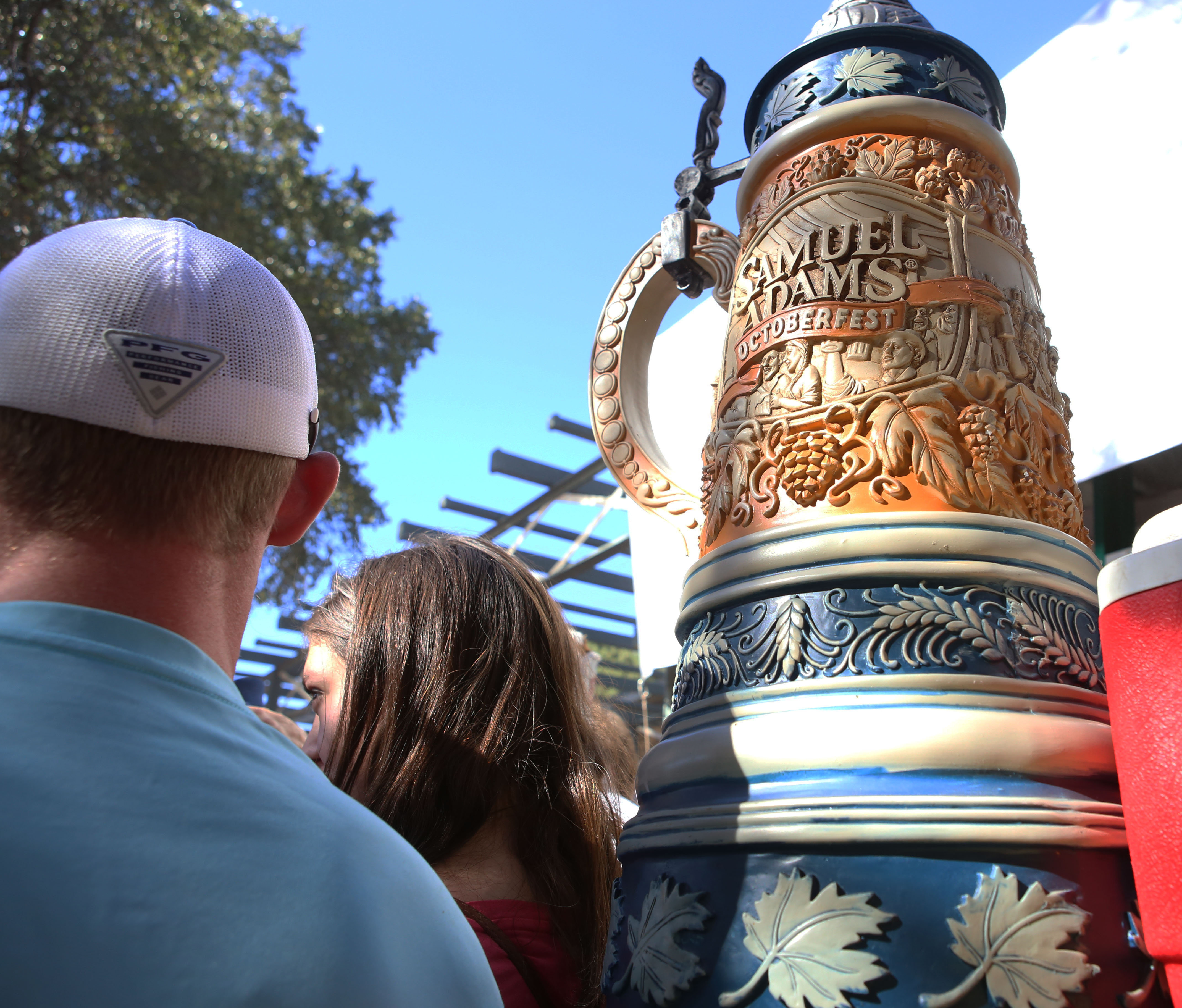 A German beer stein carved into the Samuel Adams brand. While this stein is designed more for decorative than practical purposes, traditional steins are usually a liter. Photo by Larisa Manescu. 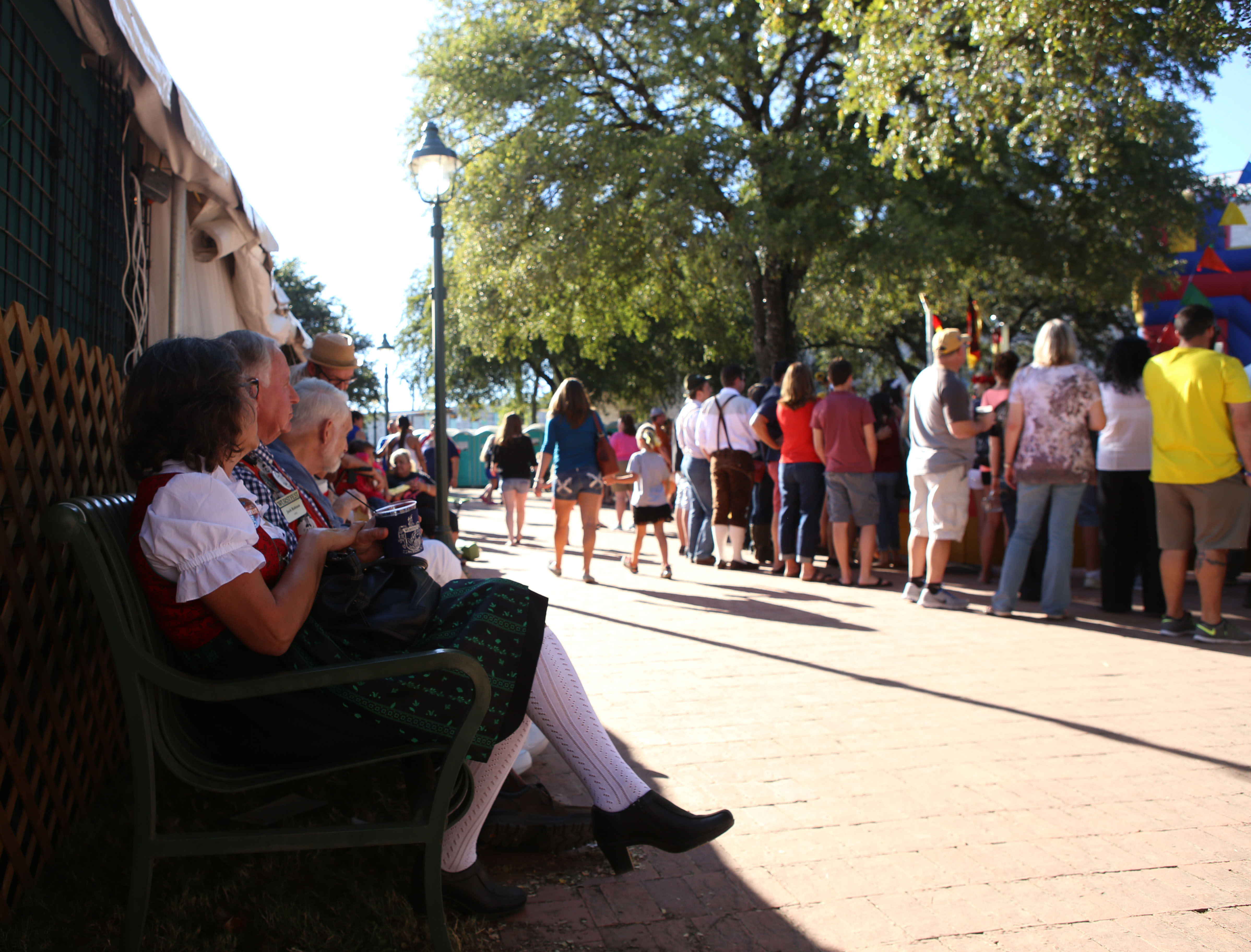 IMG_1562
Attendees take a break from the hustle and bustle of the festival to watch children play at the KinderPark, where a variety of children's carnival games are set up. Photo by Larisa Manescu. 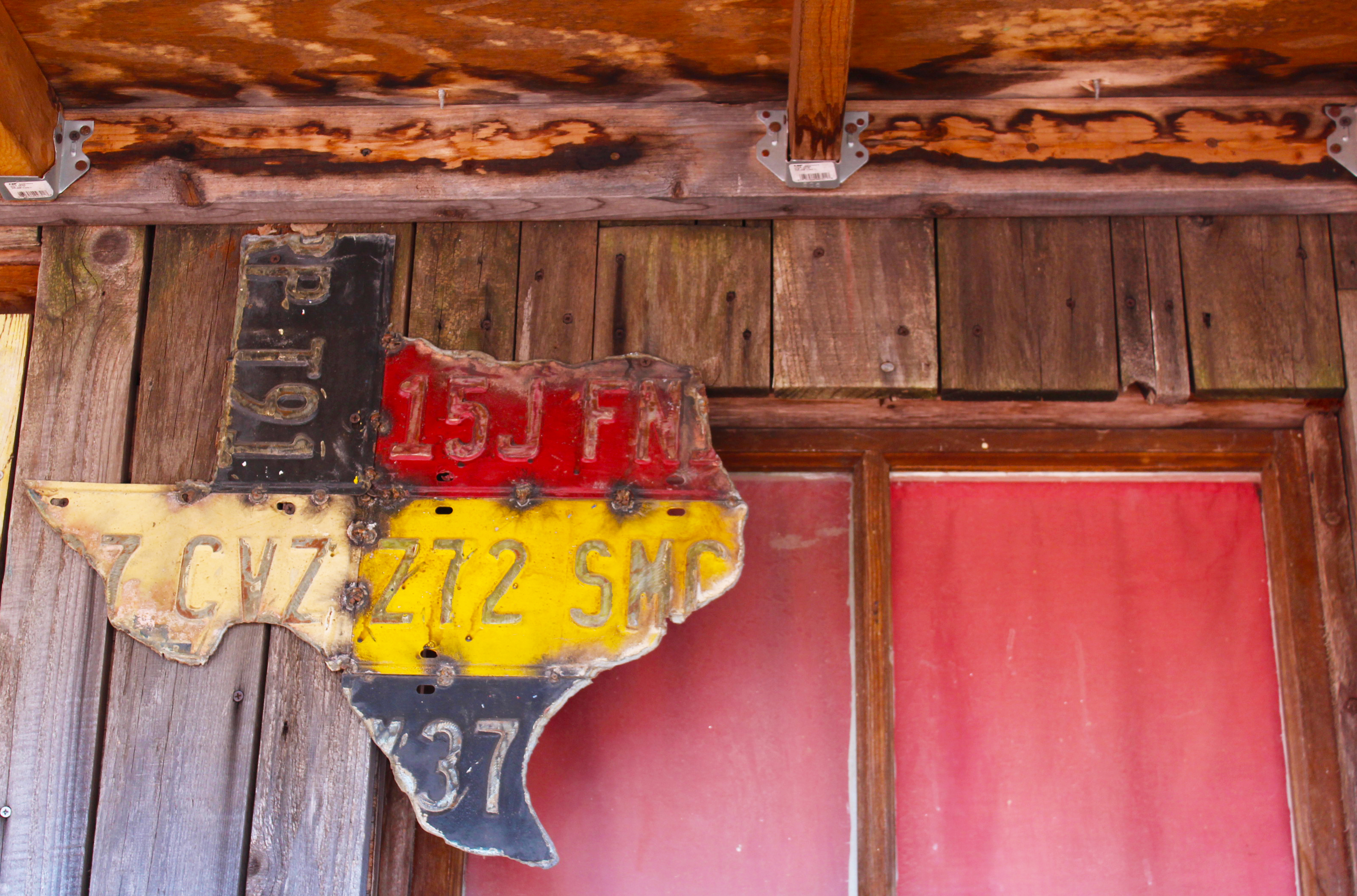 The uniqueness of Oktoberfest festivals in Texas is that they combine elements from both Texas and German culture. Photo by Breanna Luna. 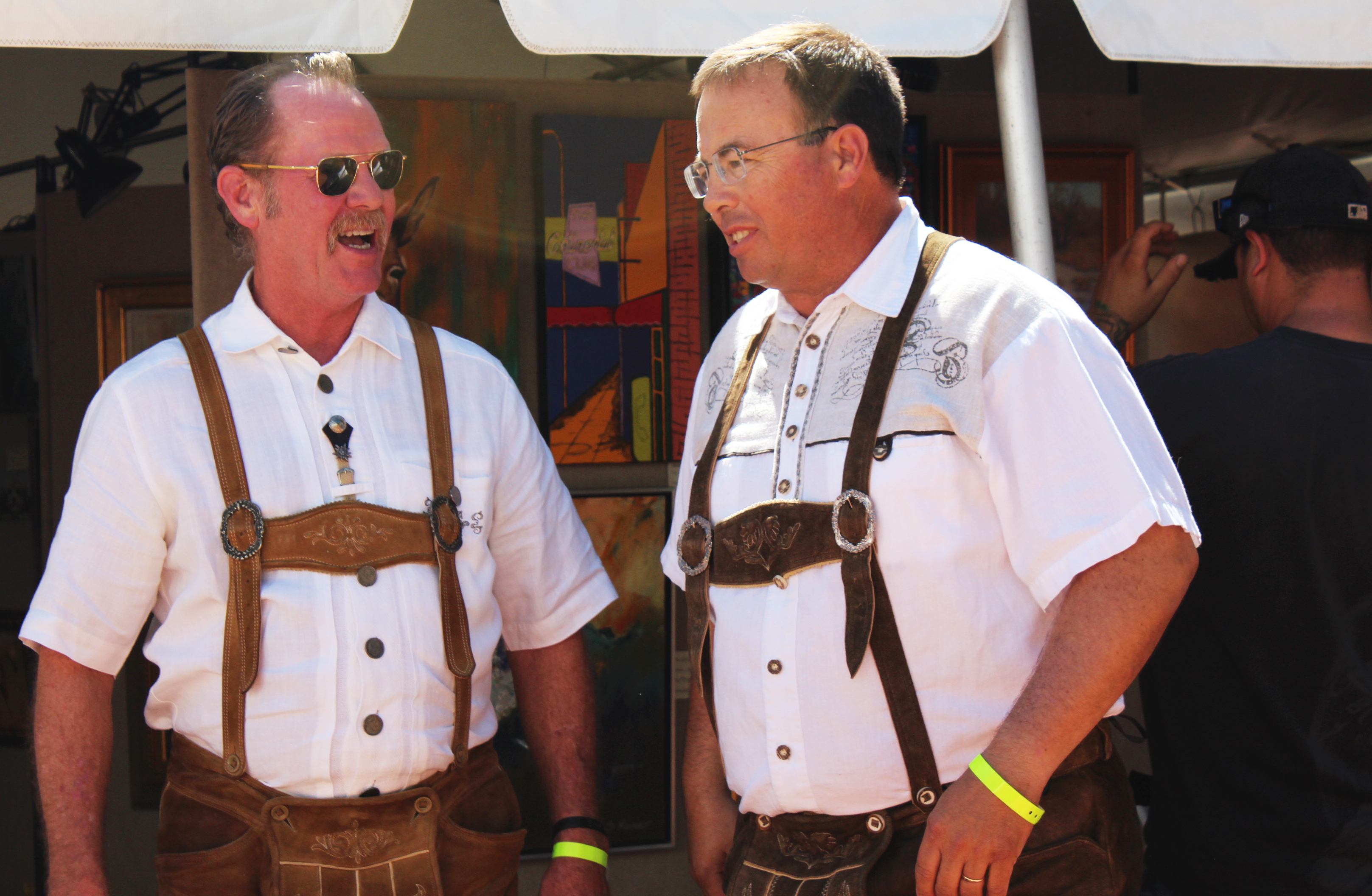 Two festival-goers dressed in leather lederhosen, common attire for men in both Germany and Oktoberfest festivals around the world. Photo by Breanna Luna. 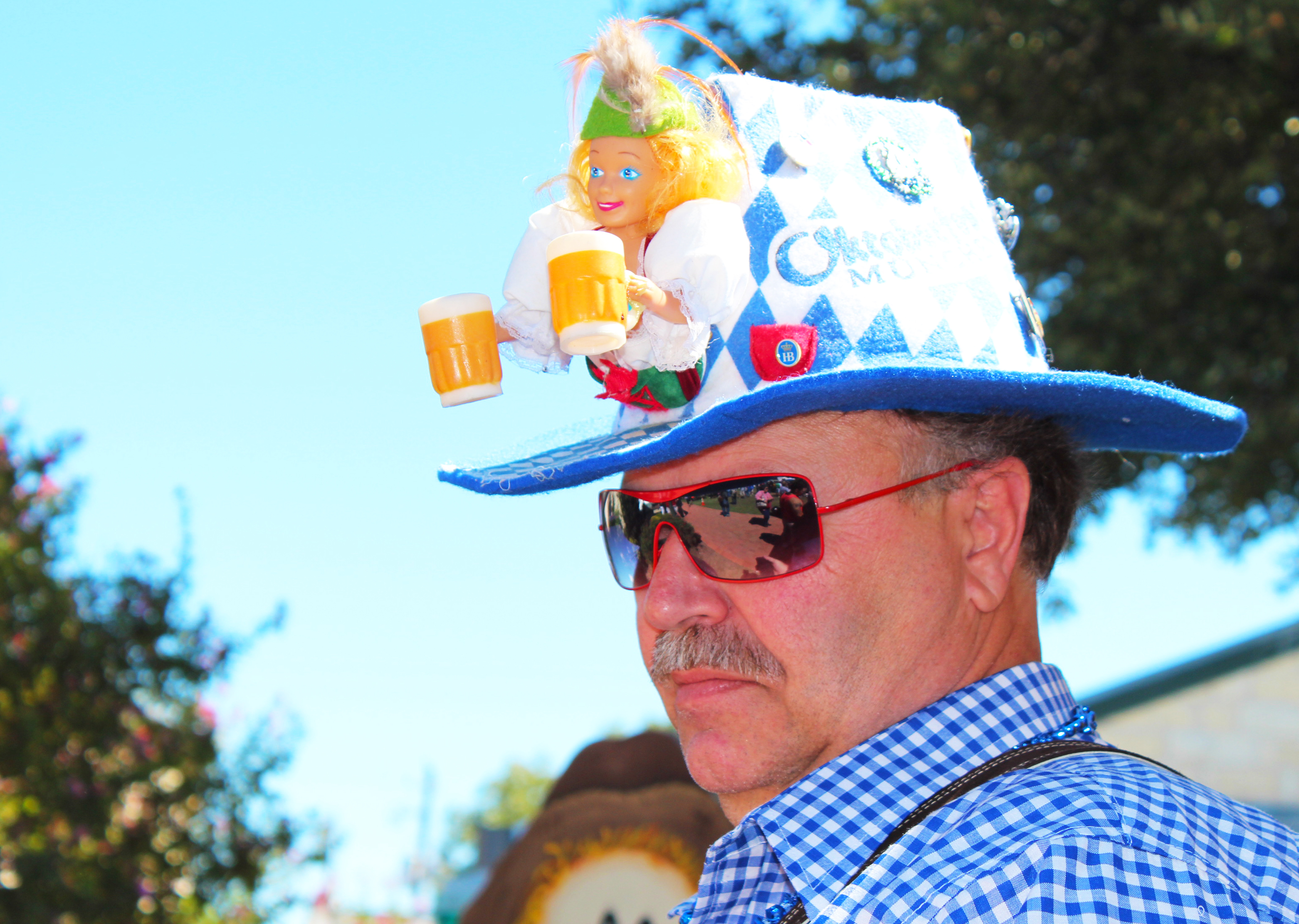 Oktoberfest brings out a variety of costumes ideas, like the extravagant hat sported by this festival-goer. Photo by Breanna Luna. 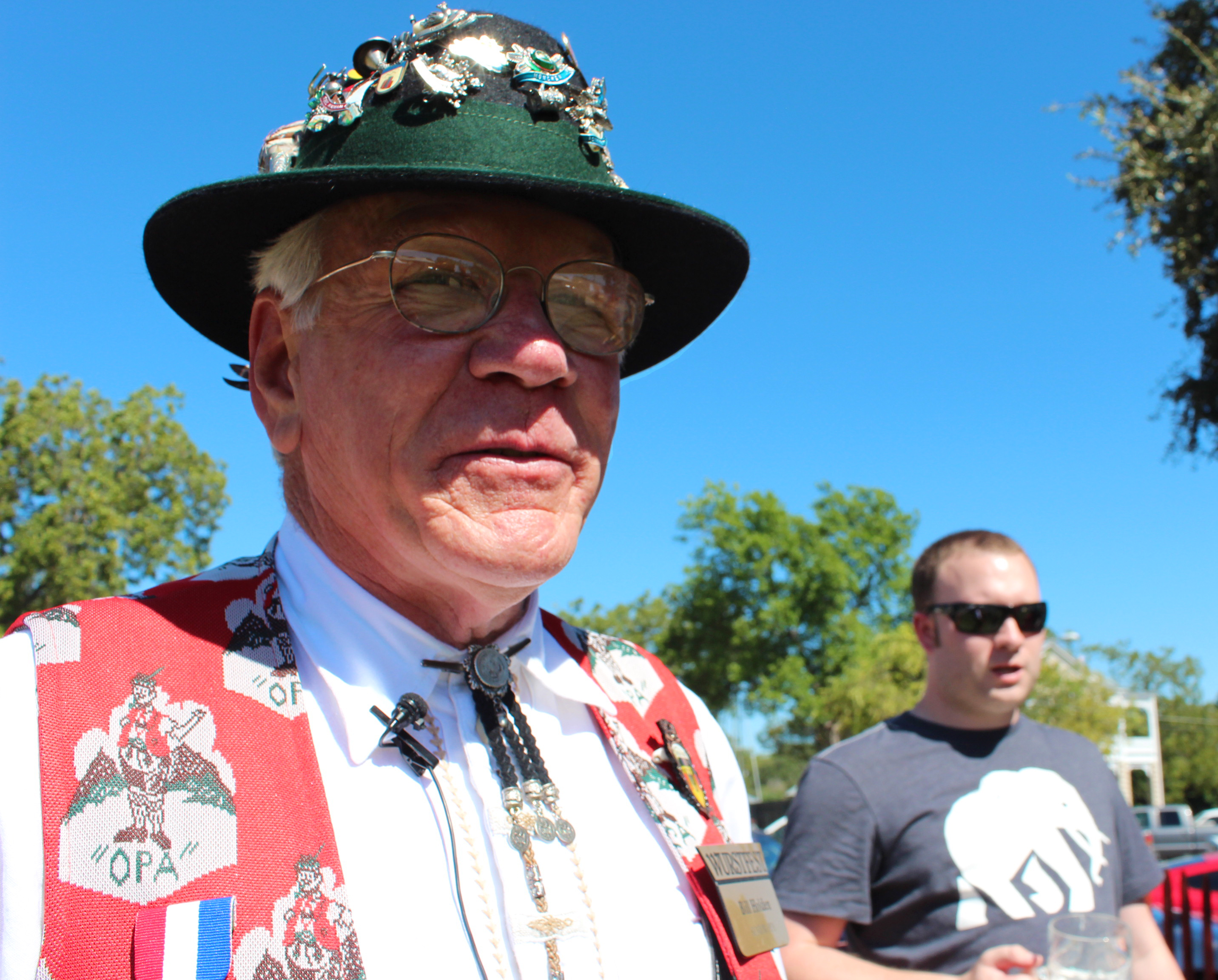 Grosse Opa Bill Holden takes some time off from his dancing to speak about his background in dancing, playing earlier in the day with his band and his involvement with Wurstfest. Photo by Breanna Luna. 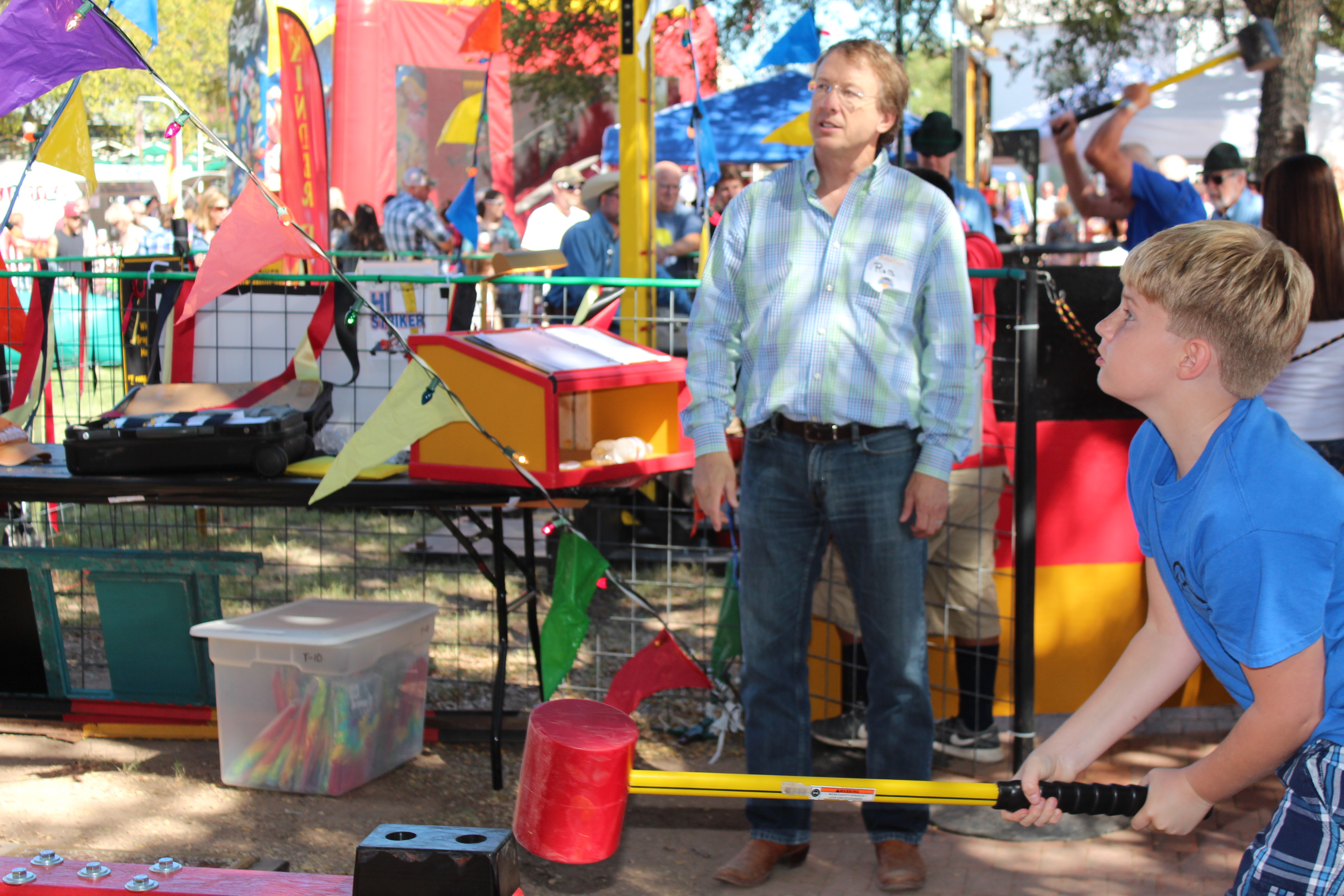 A child exerting effort at the high striker, a common festival game that offers three strikes to get the puck to hit the bell at the top. In the background, an adult tries his hand at the adult high striker. Photo by Breanna Luna. 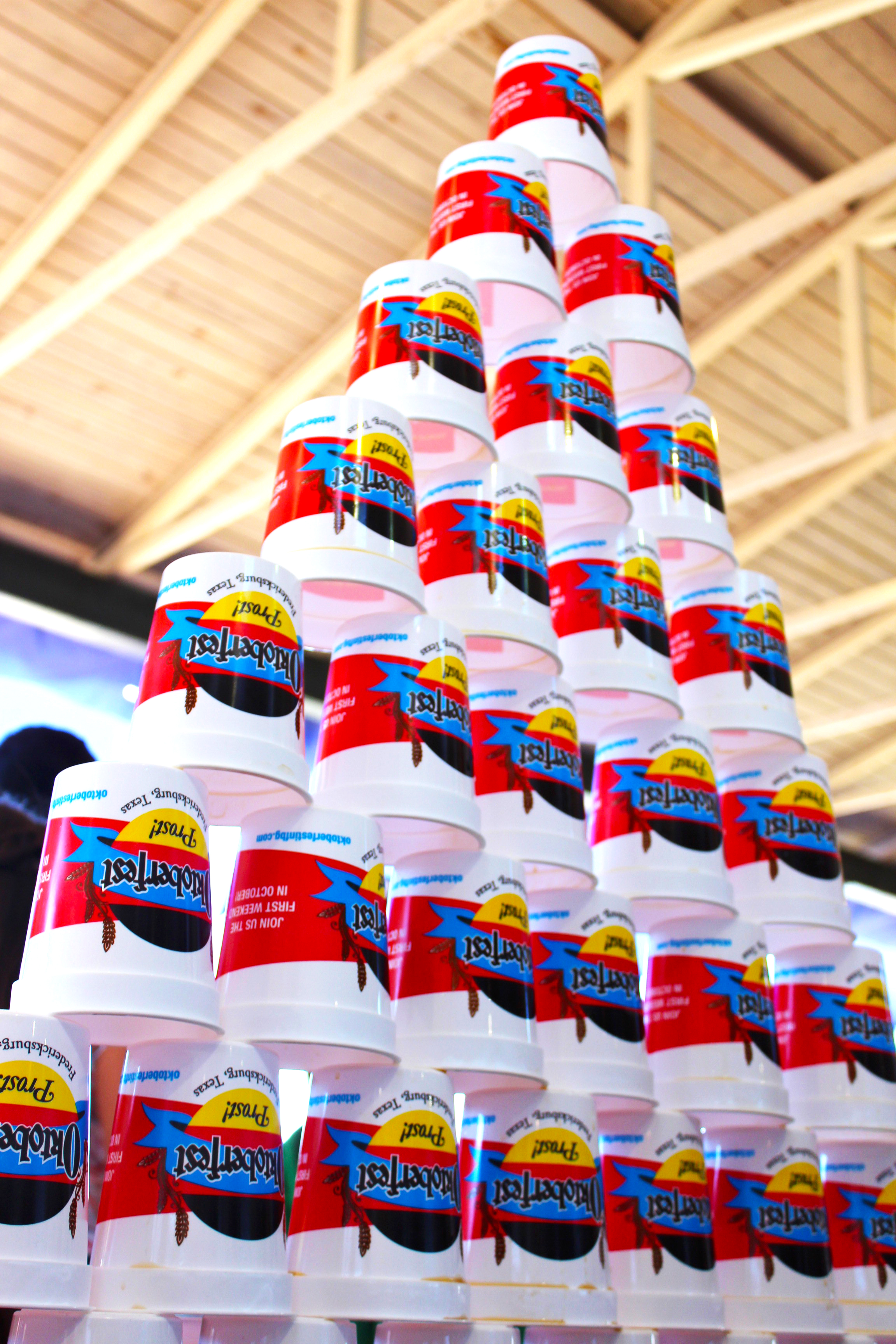 A pyramid of cups, a testament to the amount of beer flowing at Oktoberfest. Walking around the festival, one can know how much beer each person has drank by how high of a cup stack they are carrying. Photo by Breanna Luna.

The planning that goes into the festival is extensive and the local community is heavily involved. Oktoberfest festival manager Debbie Farquhar and her group of chairs have meetings with all City departments, such as the police and fire department, who she said are always fully aware of the plans and eager to help.

Although no official study has been done to quantify how much money the festival generates for the town, Farquhar said that the economic impact is evident.

“Lodging was fully booked, retailers love it, restaurants had waiting lists, gas stations had their share and my list could go on,” Farquhar said.

As soon as the festival is over, debriefings among the Oktoberfest Advisory committee occur and ideas for next year’s festival are already being generated.

Oktoberfest Season in Texas from Breanna on Vimeo.

Other similar festivals have sprung up around Central Texas, with each looking to take advantage of the season and contribute to the maintaining of German culture in the region. One such festival in Austin goes by the name of AustOberfest. After a successful debut in 2013, the second annual event was held on Sep. 27 of this year.

Austin Saengerrunde, a traditional German choral singing society and the oldest ethnic organization in Austin, hosts the newly established festival. Brian Michalk, the organization’s president, said that the event had more than doubled in size in terms of visitors since it was first held one year ago.

Preparations for a large festival in the heart of Austin require planning far in advance. AustOberfest staff begin work for the event six months in advance, making contact with potential sponsors and vendors and advising city officials of potential traffic disruptions. AustOberfest organizers would one day like to be able to close down additional streets around their location at 1607 San Jacinto Blvd.

Miletus Callahan-Barile, Saengerrunde’s facilities director, emphasized the positive effect that such a festival can have on the regional vendors who participate.

Even so, Callahan-Barile did acknowledge the importance of offering strong entertainment value to visitors at a festival. And Michalk was sure to point out that arranging all of the assorted entertainments on offer isn’t cheap.

“Budgeting is always difficult for something like this,” Michalk said.

While the available budget does grow for a festival as the event becomes larger, the desire for bigger and better fare and fun isn’t easily sated. And so it is that AustOberfest organizers have already begun to consider how to go about funding a 2015 event that will outdo this year’s.

But for all of the planning that must go into these festivals and others like them in Central Texas, the mission remains the same: bringing German culture to local residents and showing them a good time. 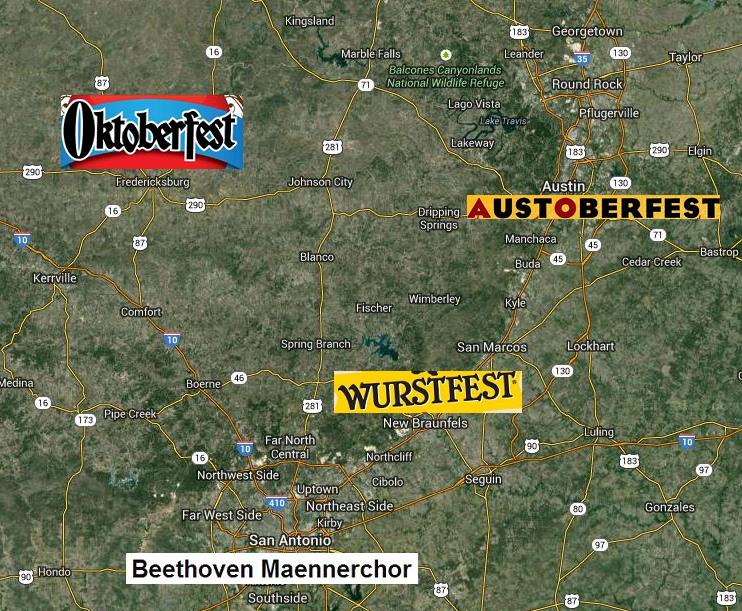 A few of the season’s main festivals in Central Texas.