Blackout sad. Definition: Similar to anterograde amnesia, in which the subject cannot recall any events after the event that caused amnesia. Much like an alcohol-related blackout. 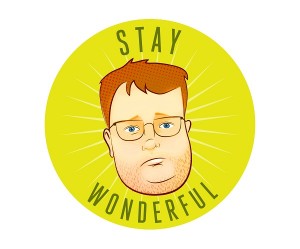 Aaron Brooks further describes the intricacies of being blackout sad from a stage in a dimly lit room. Meanwhile, his audience roars with laughter while they drink cocktails and cheer on each performer. Brooks is an up-and-coming comedian in Austin, Texas, who transforms his life and its misfortunes into enjoyment for others.

“I don’t love when bad things to happen to me, but I look at it as an opportunity to talk about something on stage,” said Brooks. 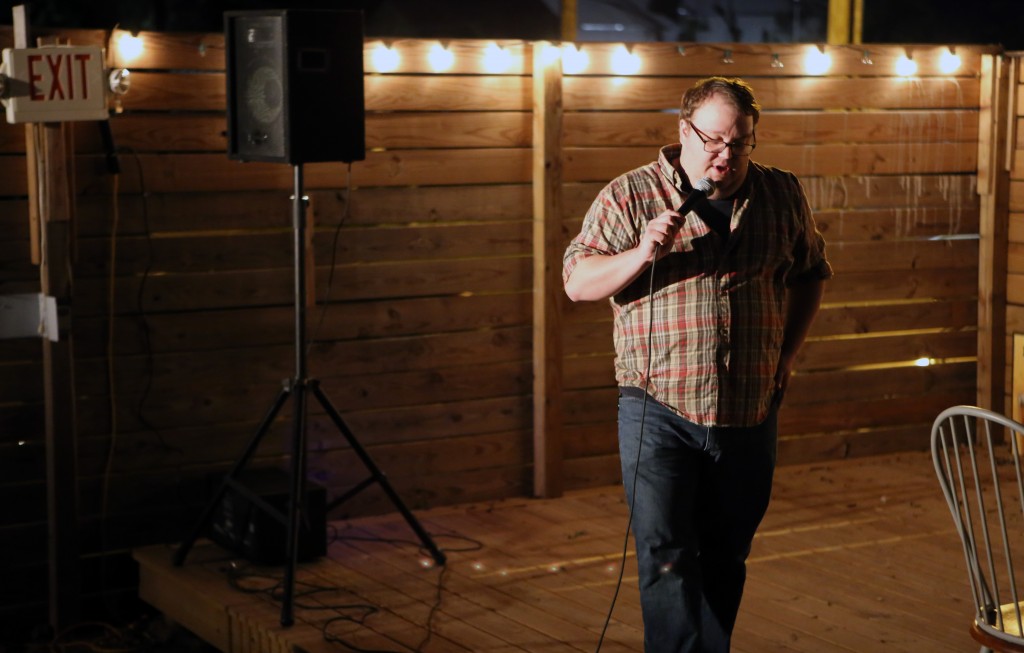 On stage at Kebabalicious, Aaron interacts with the audience by asking personal questions and talking about his own in a comedic way. Photo By: Shelby Custer

Comedians mingle before the show with the audience at the Lucky Lounge. Photo By: Shelby Custer

Brooks’ stand-up includes jokes about his “estranged” father who may have his legs amputated due to diabetes.

“I don’t know if it’s me trying to deal with the reality that he’s going to die a slow, painful death, or if this is just the grieving process for me,” said Brooks.

His life experiences not only provide content for jokes but they also inspire his pursuit of a career in comedy. 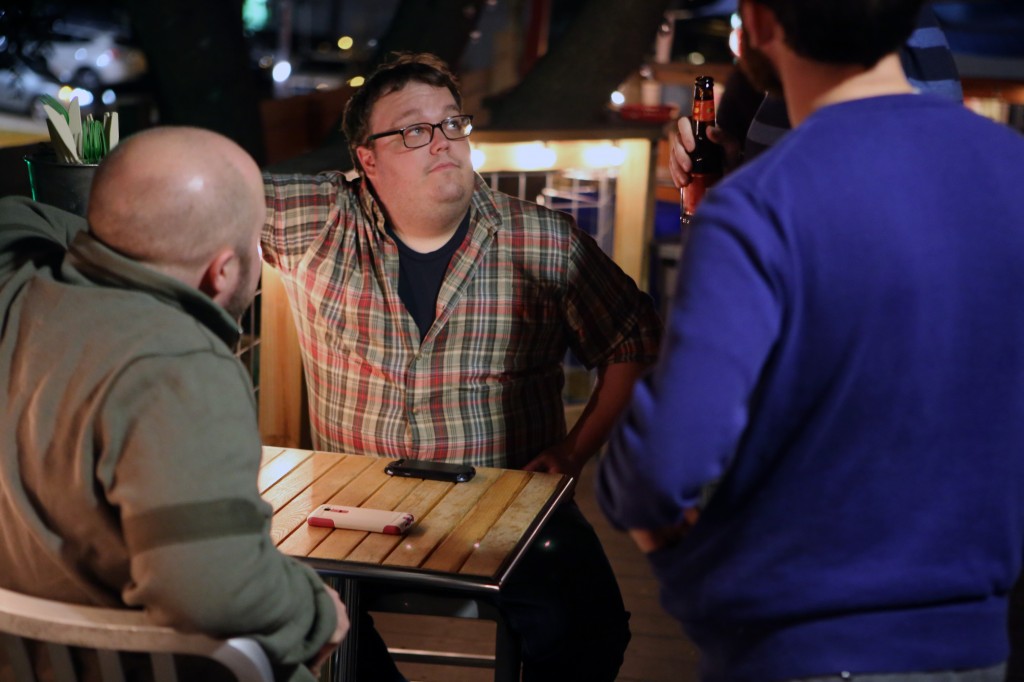 Aaron chats with fellow comedians before the show. Photo By: Shelby Custer

For a year, Brooks forewent job opportunities in his accredited degree field of radio broadcasting to take care of his ailing grandmother.

“In October of 2009 she moved into our house on hospice care, and she died,” Brooks said. “She died after I held her hand. She squeezed back, and she died.”

His grandmother’s death urged him back into his long-awaited role in stand-up comedy.

“I realized shortly after that happened that I wanted to make people laugh again,” Brooks says. 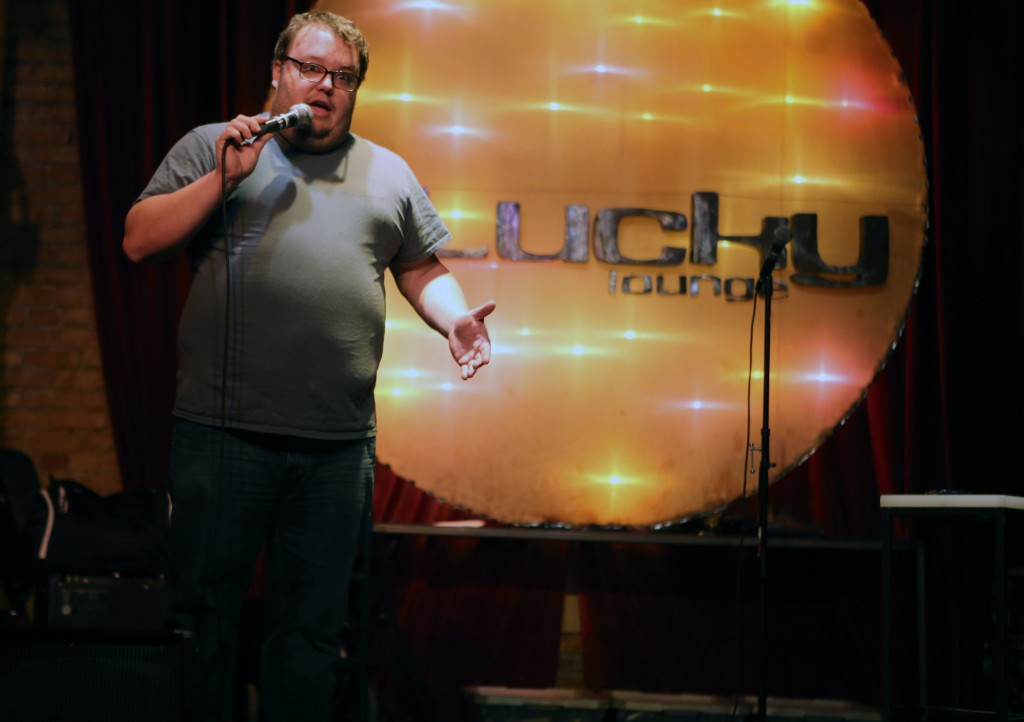 Aaron gives the audience a taste of his darker comedy by sharing personal stories from his life and using them to make people laugh. Photo By: Shelby Custer

Brooks discovered his passion for making people laugh at a young age.

“I realized you had to earn people’s friendship in other ways,” Brooks says. “So I would literally just bang my head against a wall and people would respond to it and thought it was the funniest thing, and that’s when I really got bit with the, ‘Oh, man I really like making people laugh.’” 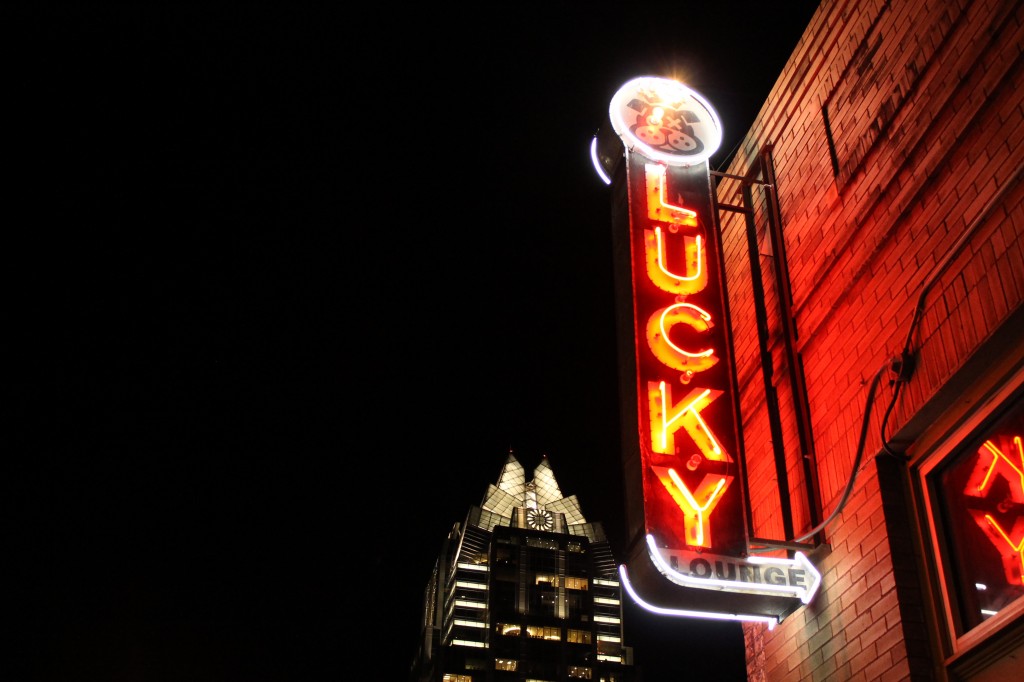 The Lucky Lounge sign lures fans in for the comedy show with the bright Frost Bank Tower hovering in the background. Photo By: Briana Denham

He also says, throughout his childhood, his mother, Barb Brooks, was a comedian in her own right. She filled their household with laughter and continually encouraged her son’s quest for a career in comedy. 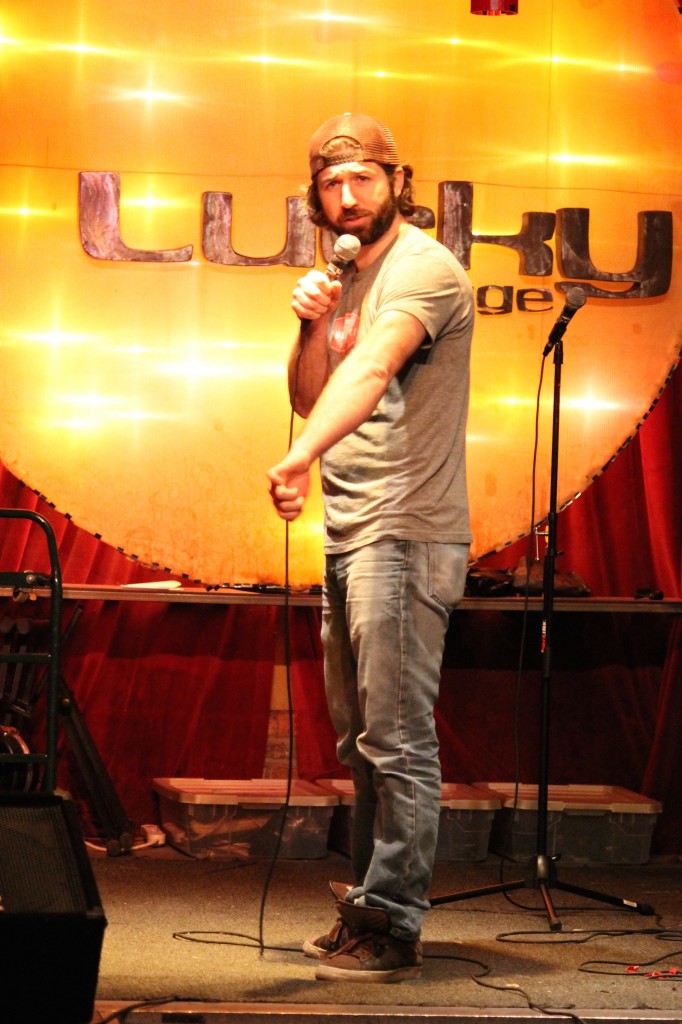 Jon Stinger acts out encounters with women on stage at the Lucky Lounge. Photo By: Briana Denham

To her delight, Brooks routinely books shows in Austin, Texas and throughout the country. He’s scheduled to perform at Fun Fun Fun Fest this year; he’s previously done routines at Cap City Comedy here in Austin and Comedy Etcetera 2 in St. Louis, Missouri; and recently entertained audiences at Lucky Lounge and headlined at Kebabalicious. He also hosts a podcast, Stay Wonderful, through Cap City comedy, where he interviews other successful comedians.

Despite his success, he has another job to pay the bills, which he jokes about in his stand-up. He asks from the stage, “Does anybody here have to wear a hairnet? No? Didn’t think so.”

Brooks’ comedy tends to be dark and self-deprecating, but according to his friend, roommate and fellow comedian, Brian Kinsella, it’s not applicable to his off-stage personality. Kinsella mentions that people often perceive comedians as depressed in their day-to-day lives; however, the assumption is untrue for Brooks.

Brooks’ comedy turns life’s iniquities into humor and entertainment for others, and he claims that he “can’t imagine doing anything else.” Brooks procures just as much enjoyment out of his craft as his audience.

“People will latch on to you if you’re doing something honest, real, entertaining and funny. That’s the best feeling,” said Brooks.

Famous comedian and actor Charlie Chaplin said, “Life is a tragedy when seen close-up, but a comedy in long-shot.” 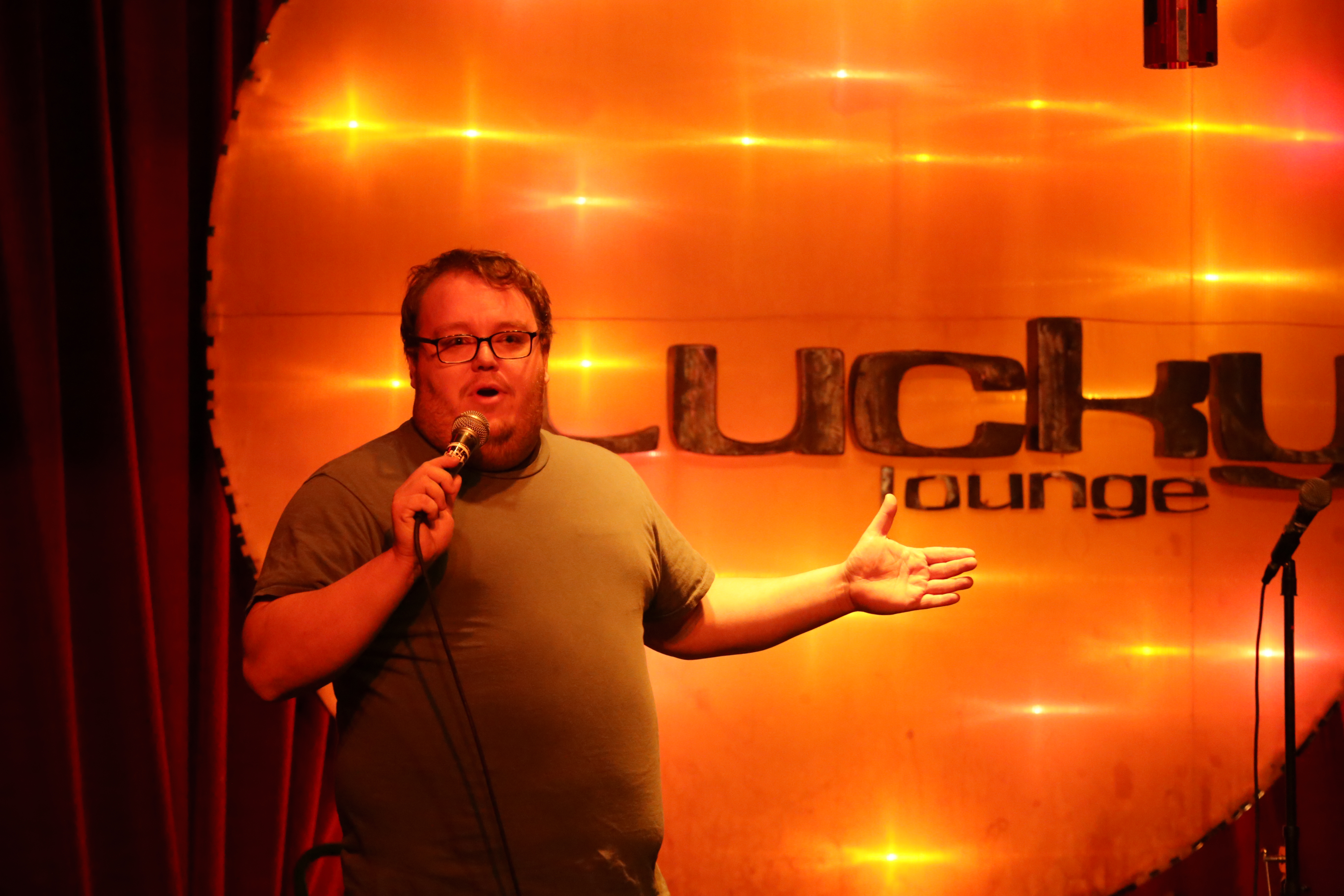 IMG_0222(1)
Aaron Brooks tells the story of his first drunken night showcasing his use of personal incidents to make audience members laugh. Photo By: Omar Longoria 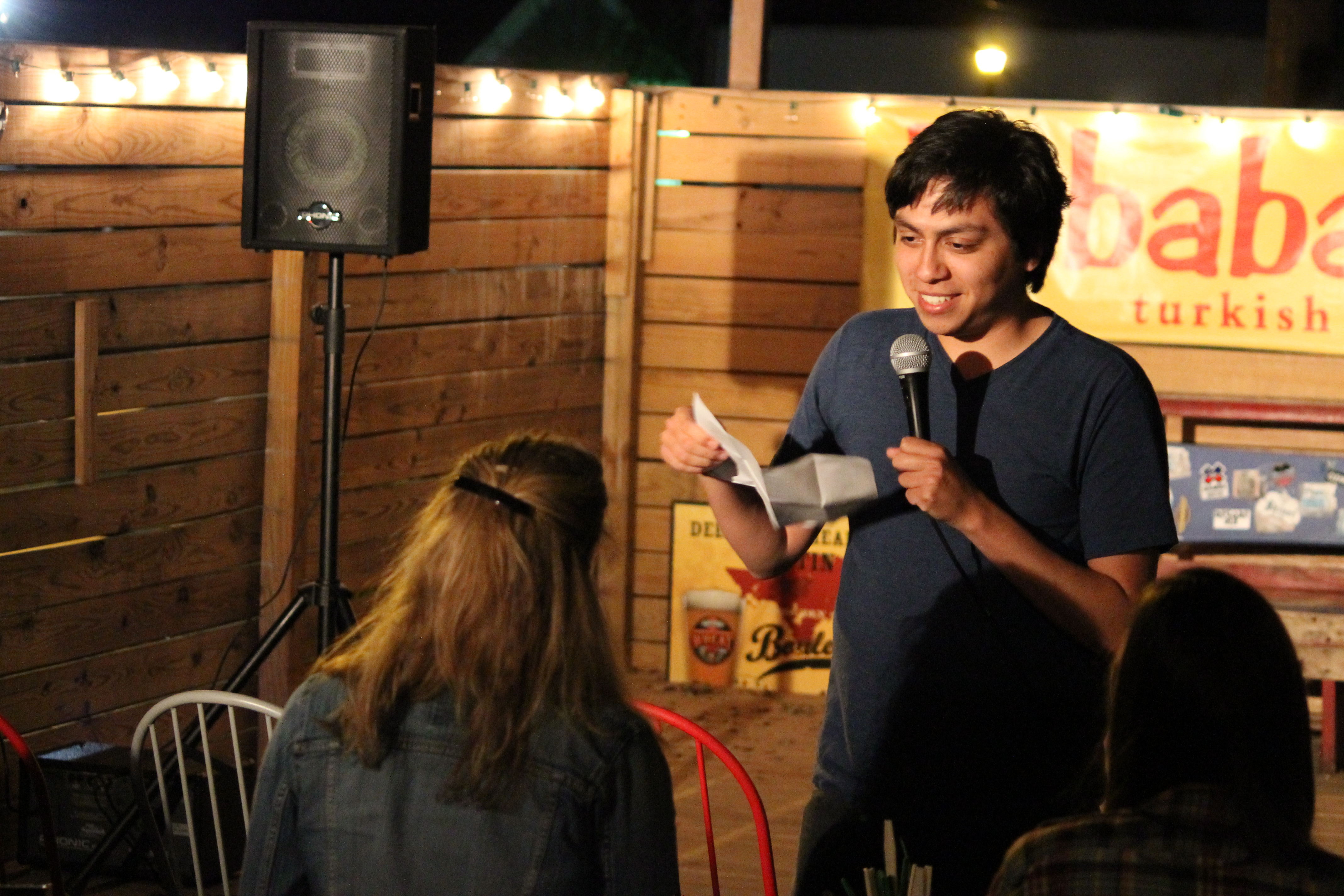 IMG_0677
Martin Urbano interacts one on one with an audience member to bring his material to life on the stage. Photo By: Briana Denham 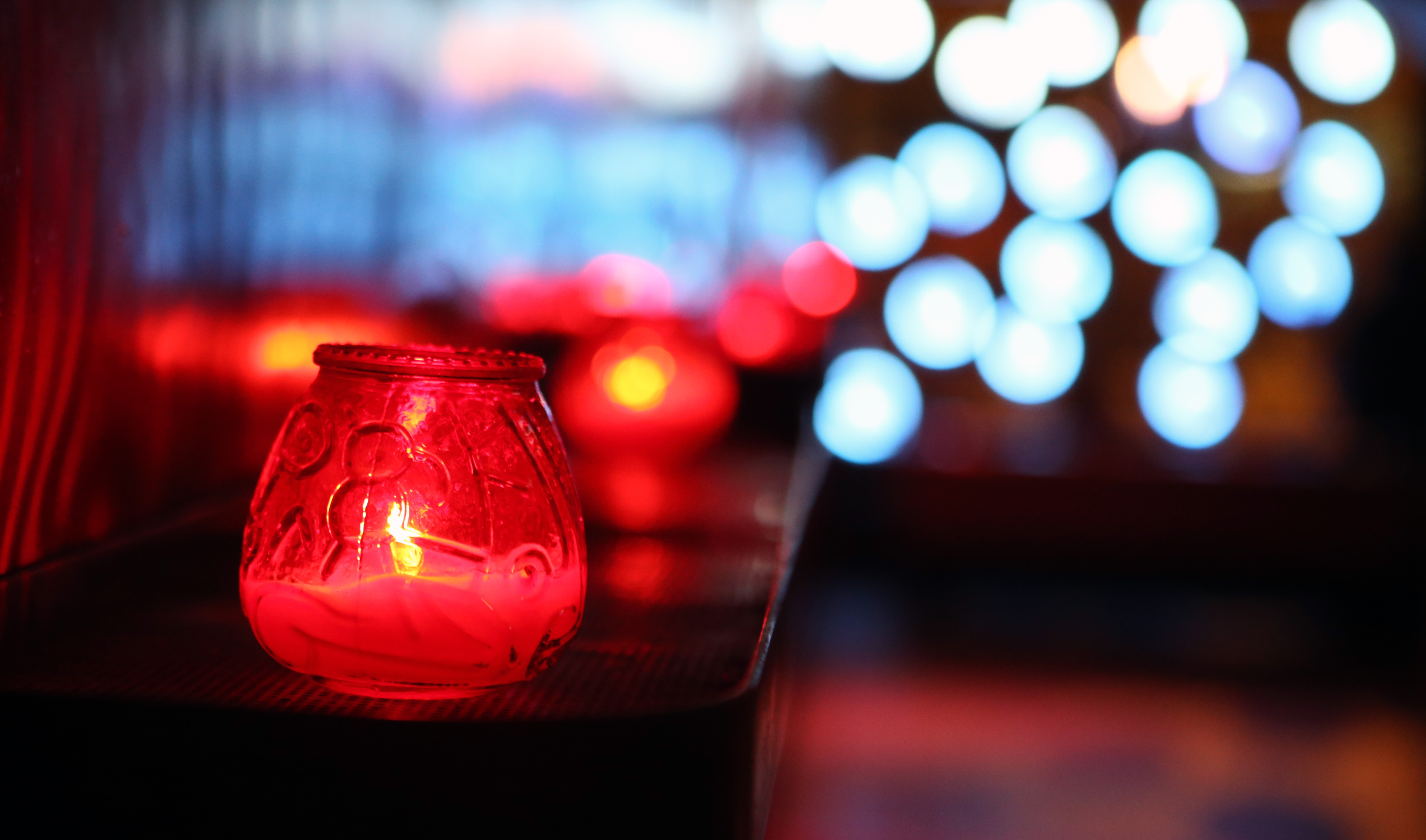 IMG_9204 n
Candles set the mood for audience members and patrons before the comedy show. Photo By: Shelby Custer 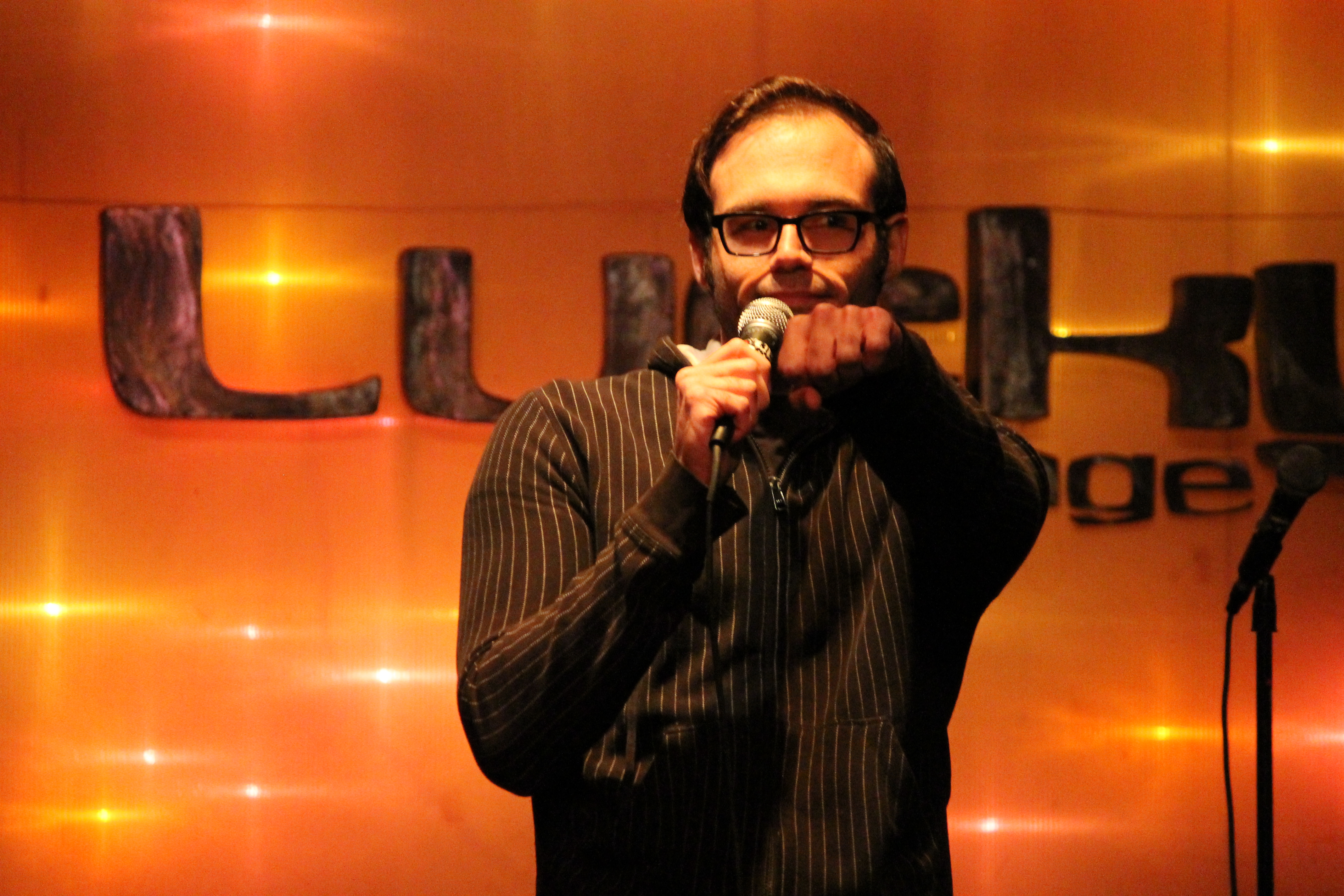 IMG_0574
John Buseman makes the punch line to his joke in a literal and comic way. Photo By: Briana Denham 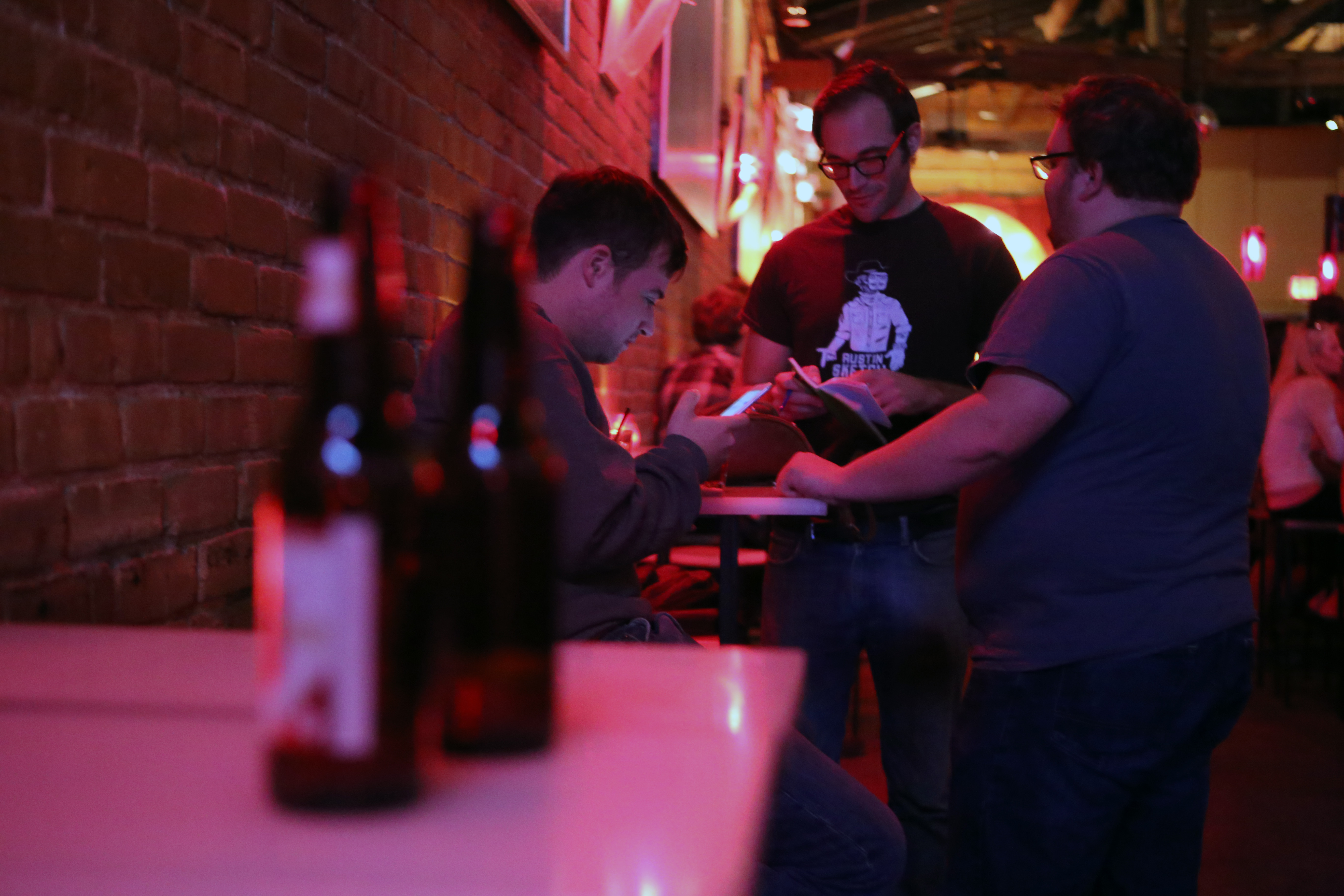 IMG_9270 n(1)
Aaron chats with fellow Comedian, John Buseman, and a friend before the show. Photo By: Shelby Custer 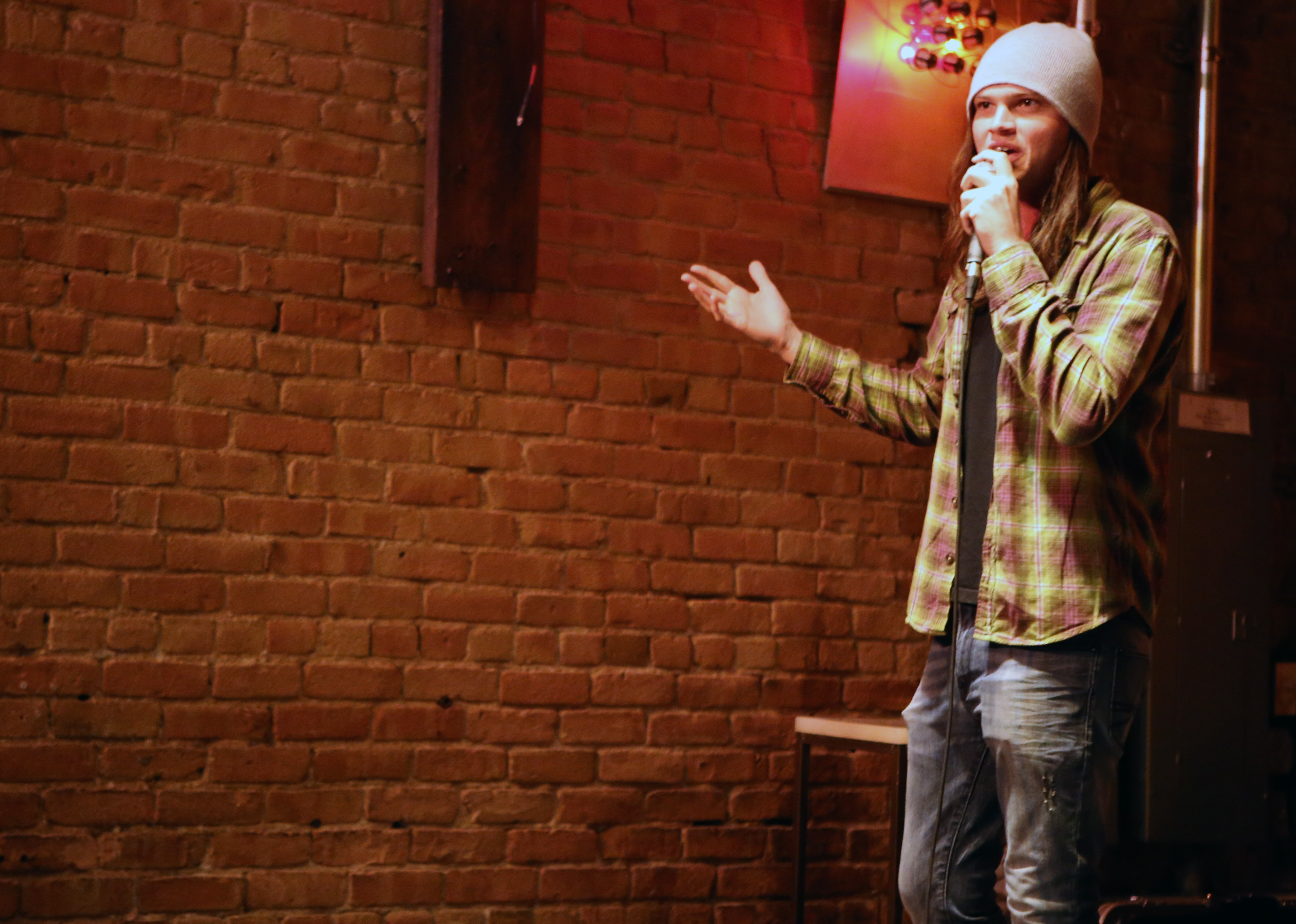 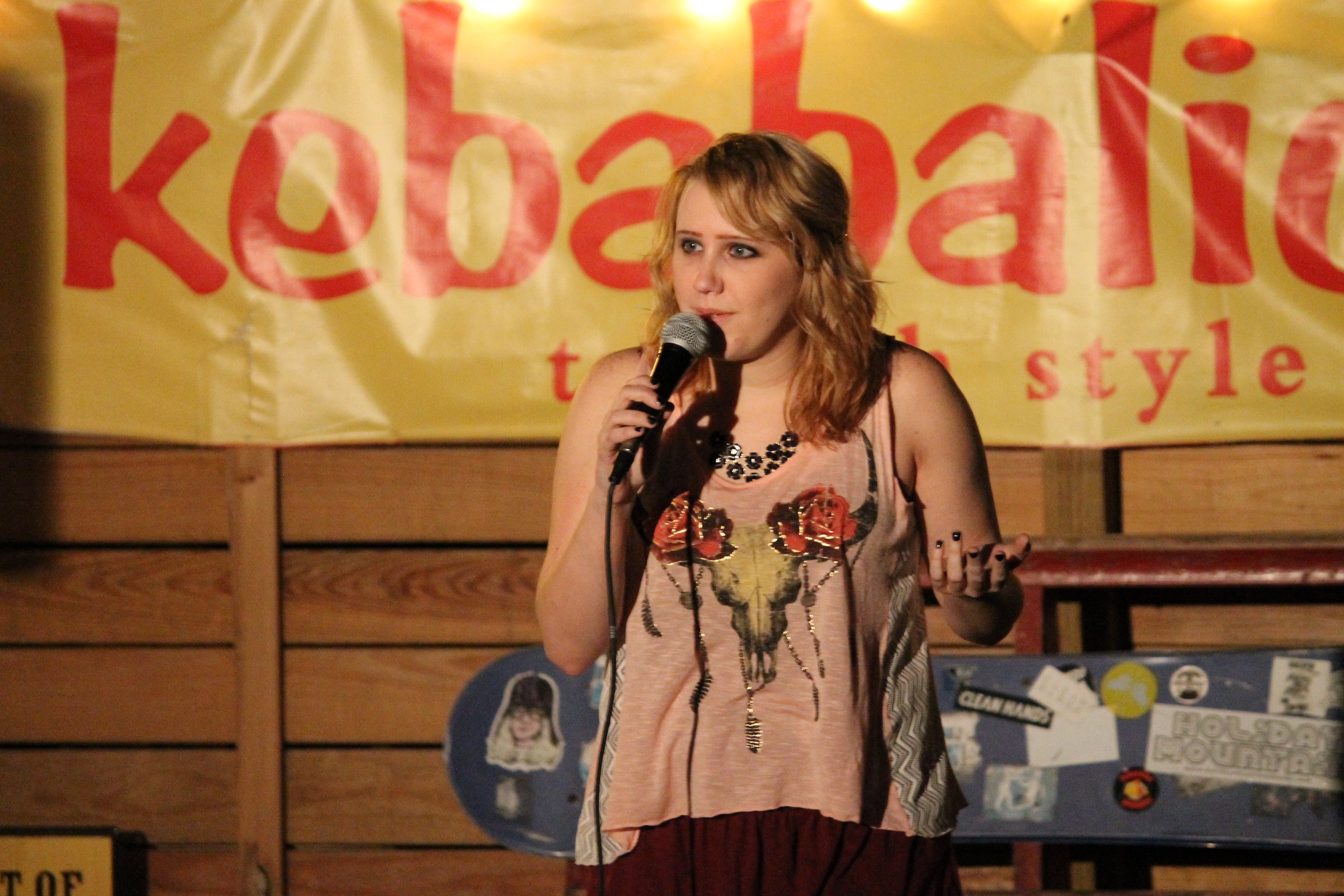 IMG_0667
Amber Bixby gets personal at Kebabalicious as she shares stories about her teen pregnancy and motherhood. Photo By: Briana Denham 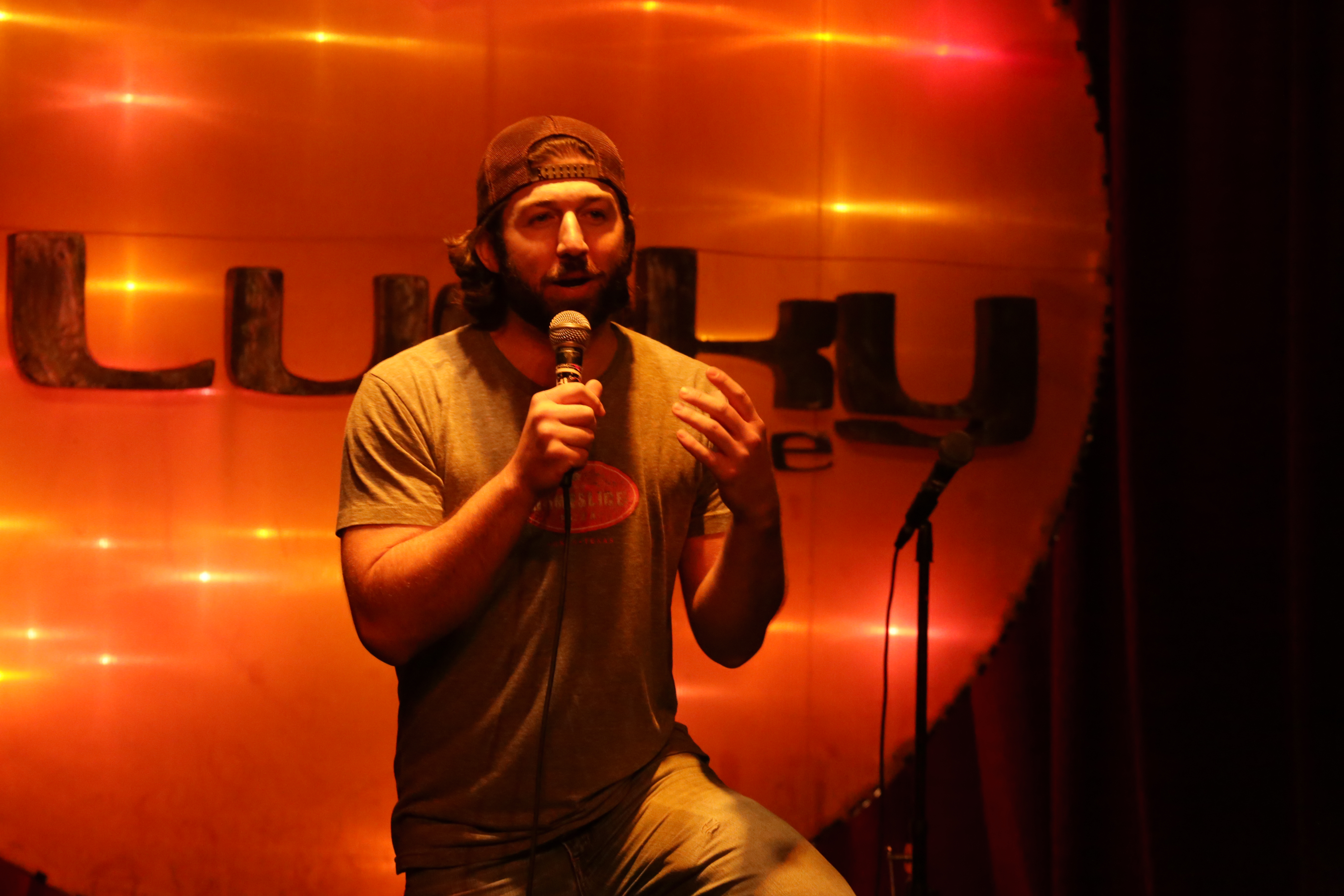 IMG_0196
In character, John Stringer discusses the woes and annoyances of being in relationships with women. Photo By: Omar Longoria 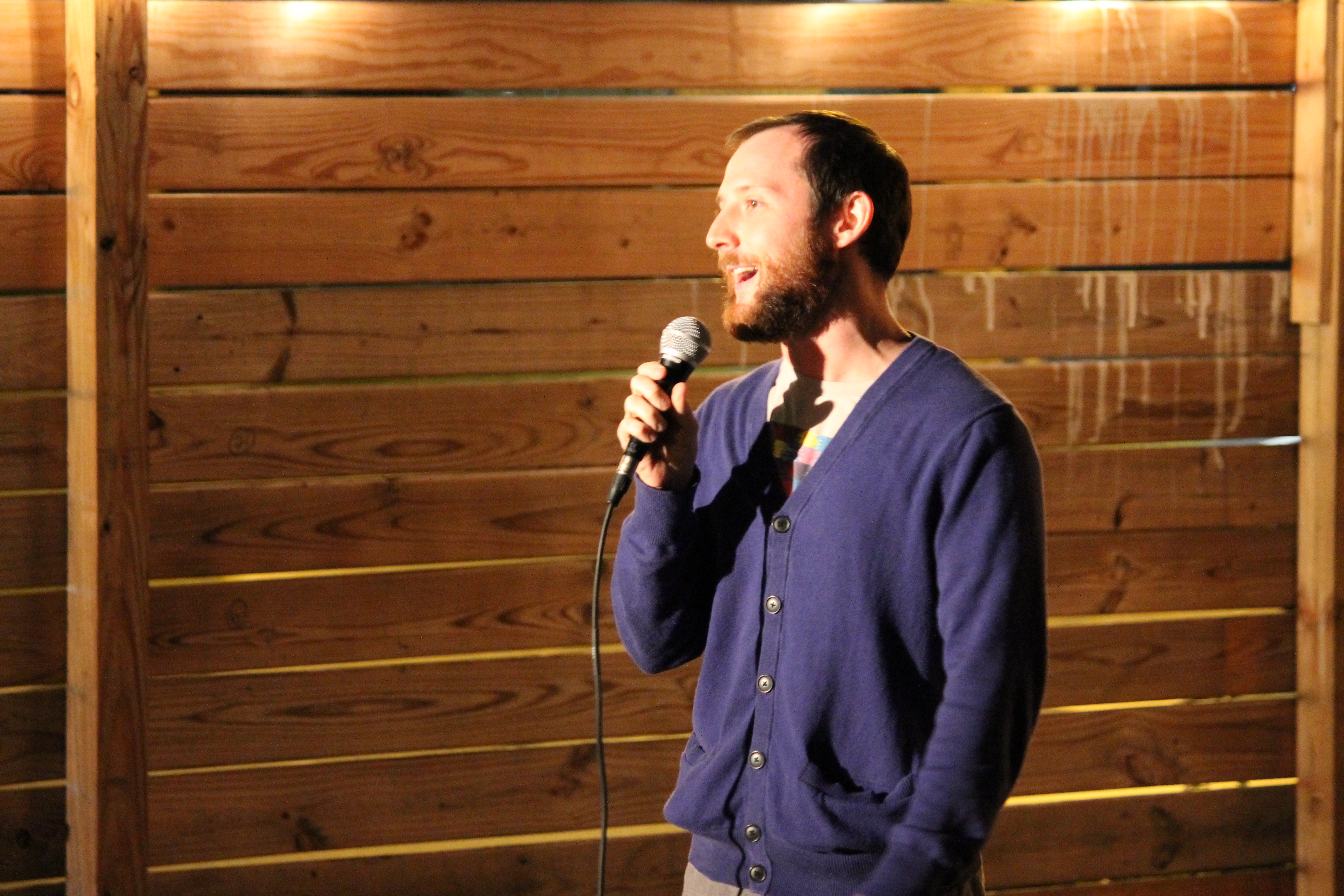 IMG_0657
Eric Nagurney sharing a set of jokes for the audience at Kebabalicious. Photo By: Briana Denham 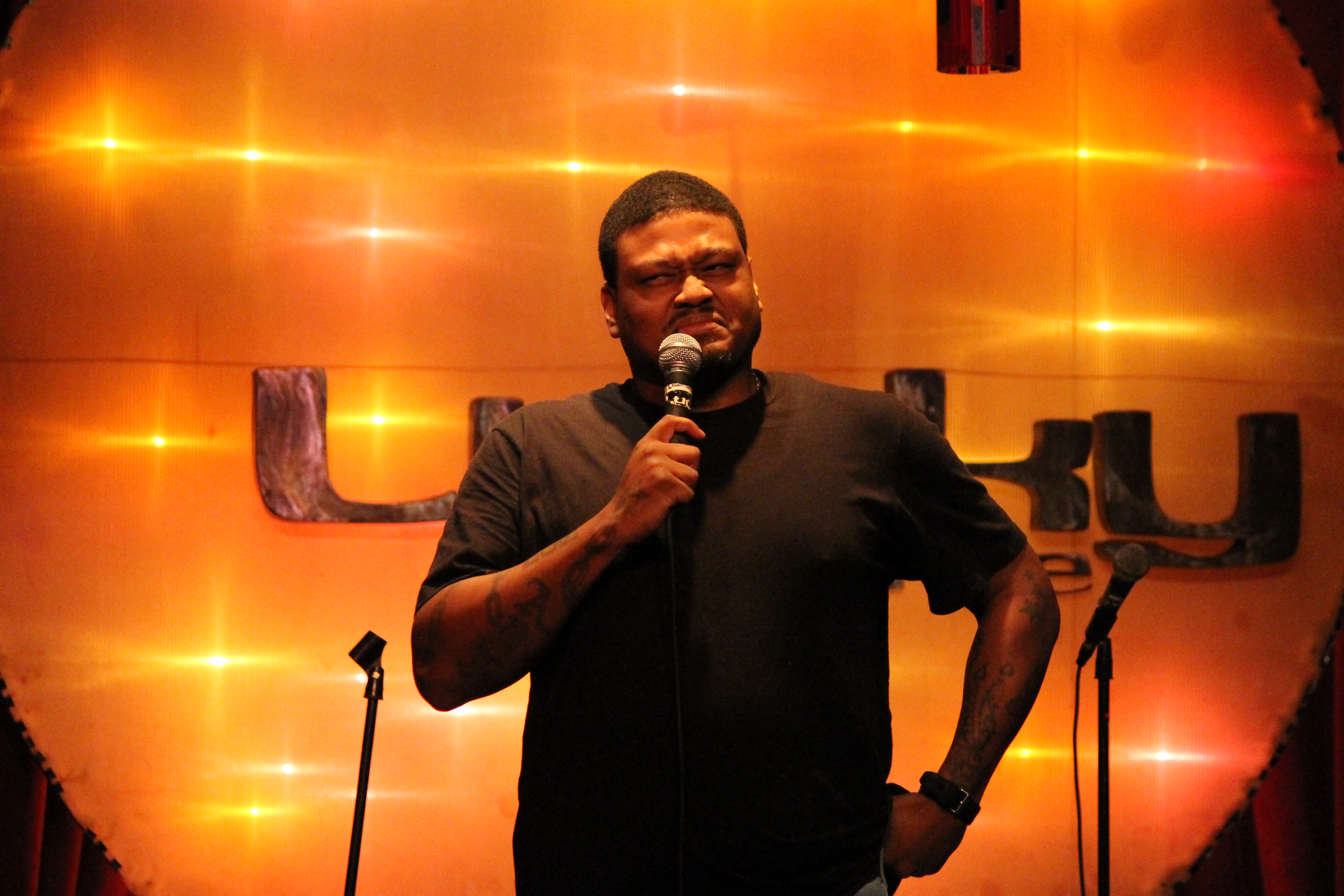 IMG_0581
Derek Fields educates the audience at Lucky Lounge, through comedy of course, about how to deal with children when they throw temper tantrums. Photo By: Briana Denham