Pumpkin Mania Takes Over Austin and Beyond 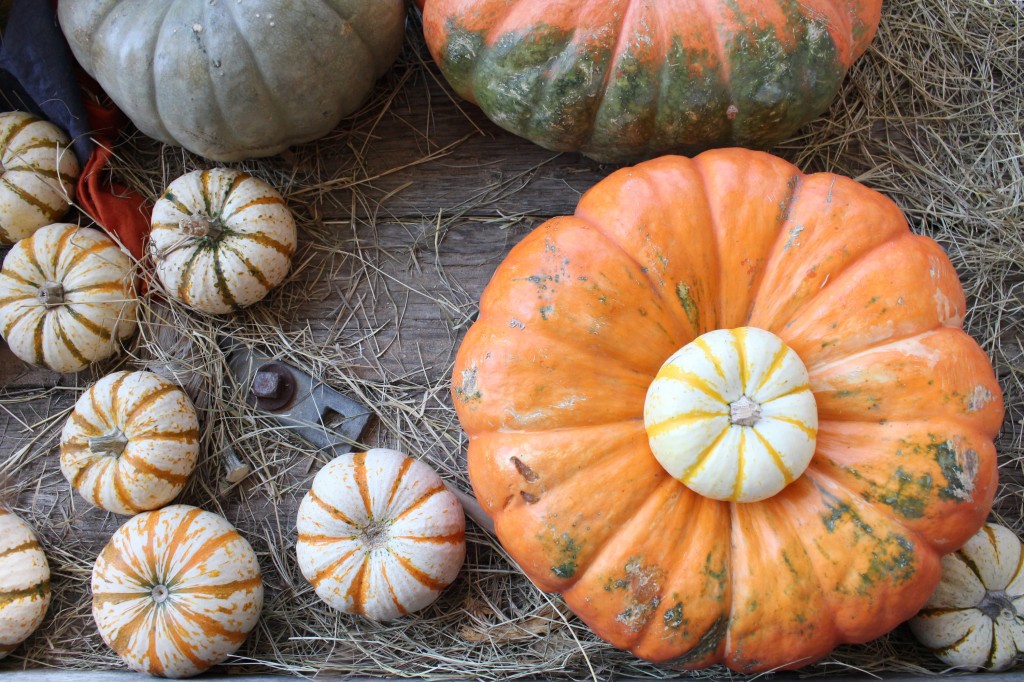 October heralds pumpkin mania—a time where one can buy pumpkin-flavored everything, and Austin businesses are cashing in on this trend.

It all started when coffee conglomerate, Starbucks, introduced their signature fall beverage, the pumpkin spice latte, 10 years ago. Since then, businesses and brands nationwide began offering pumpkin-inspired products. Sales of all pumpkin-flavored foods and beverages increased 14 percent from 2012 to 2013, according to market research firm Nielsen. In the last five years, pumpkin sales have risen 34 percent, according to the U.S. Department of Agriculture.

In Austin, businesses have contributed to the trend by offering seasonal products from about September to November, all featuring the orange squash. 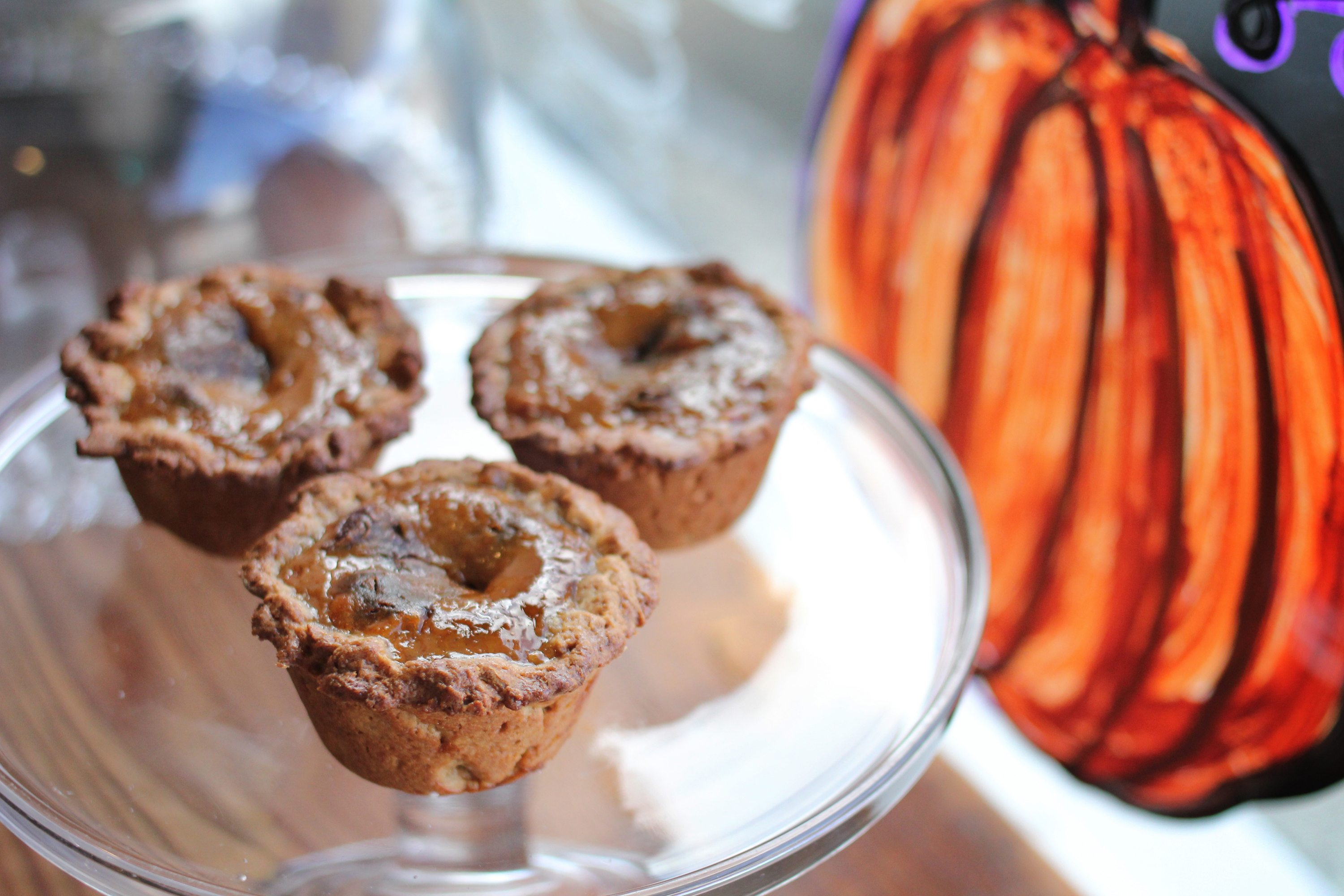 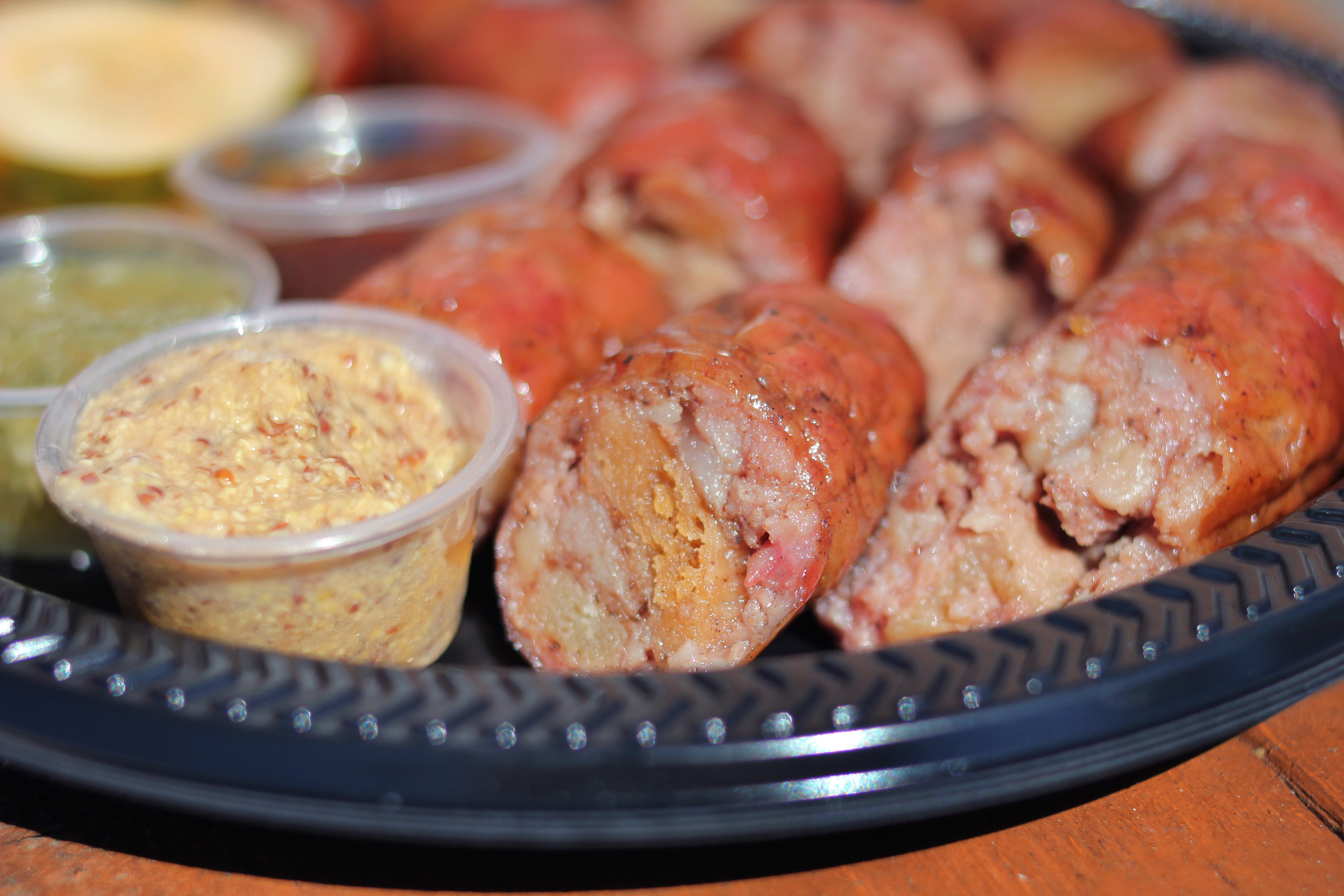 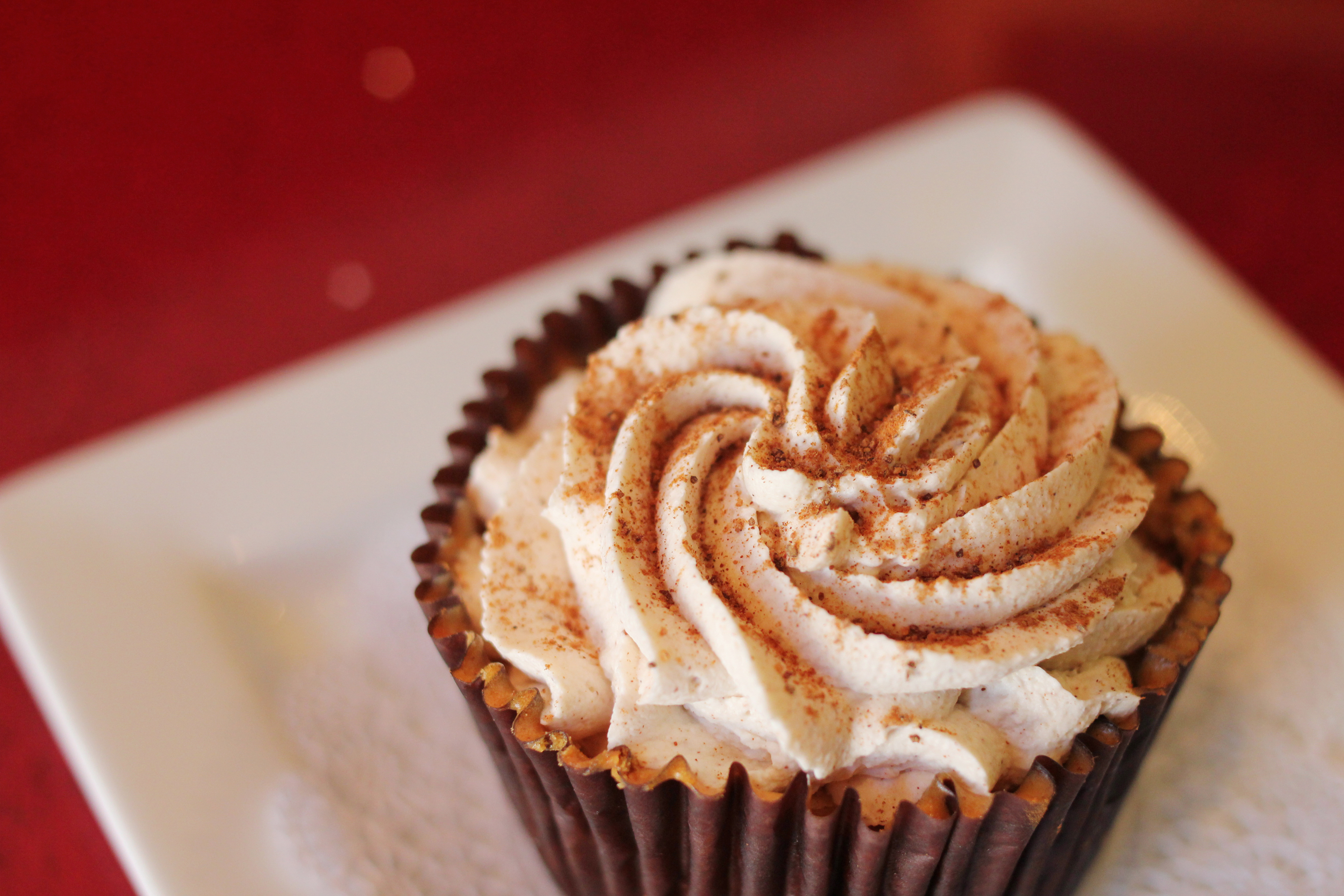 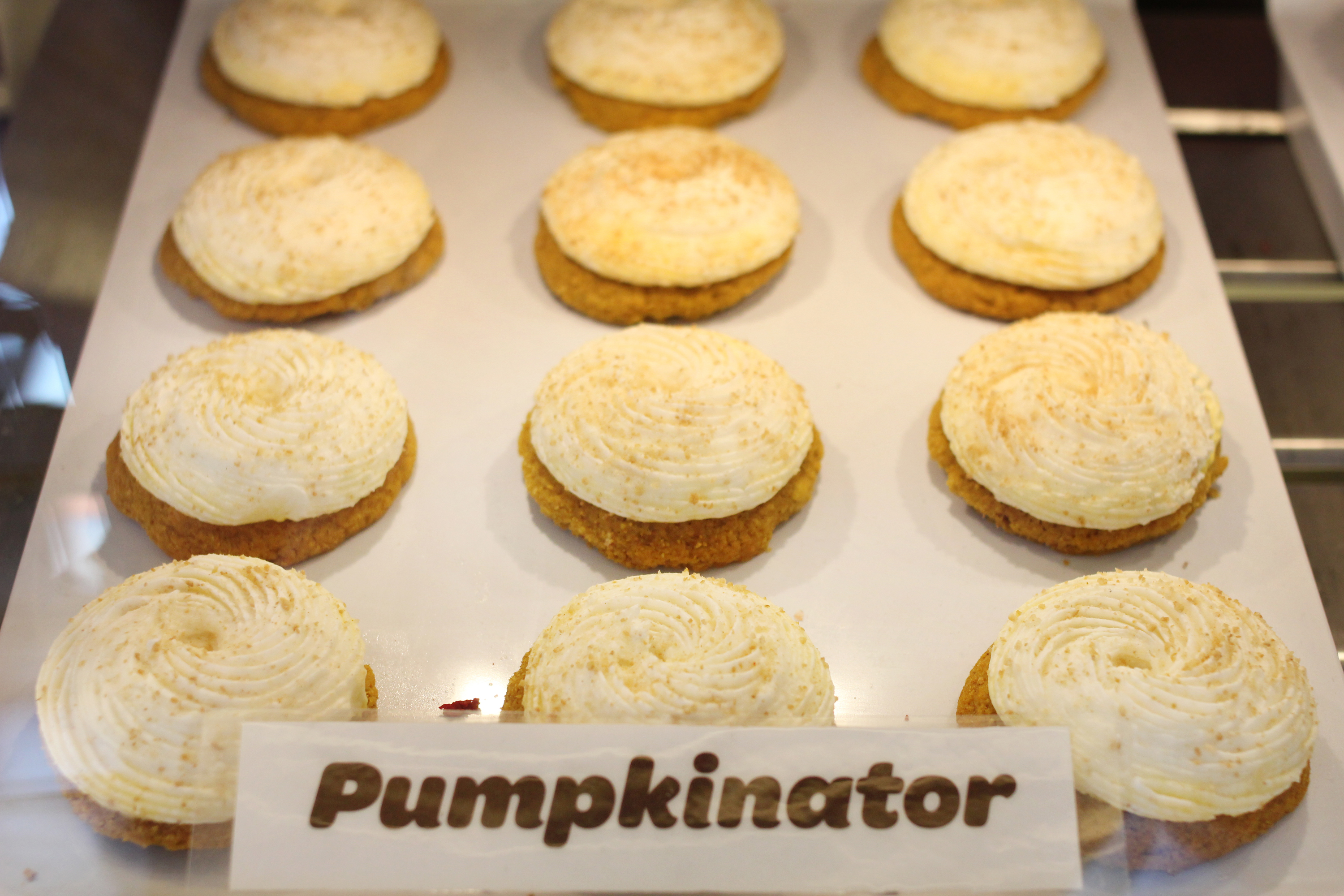 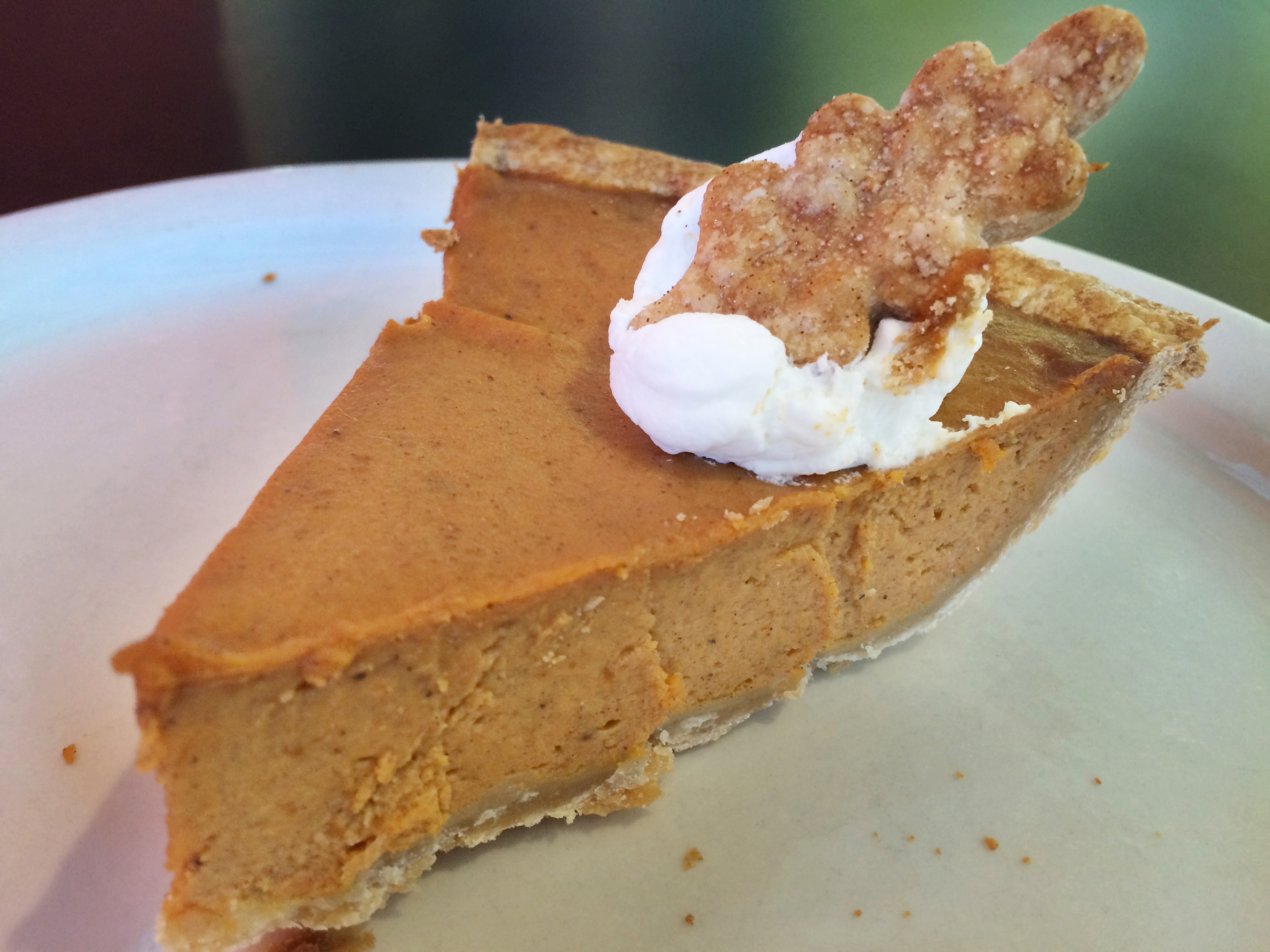 Quack’s Bakery in Hyde Park is known for their scratch made pies. Their traditional pumpkin pie is a customer favorite. (Credit: Maria Roque)

Amanda Bates is the co-owner of Tiny Pies, a local bakery that specializes in handheld sweet and savory pies. Their seasonal pies include the traditional pumpkin pie, the apple walnut pumpkin, and the ginger bumpkin, a blend of pumpkin pie, chocolate brownie mix, and gingerbread crust — flavors that Bates says keeps them baking all day.

“I think it is both for commerce and kind of the nostalgia, bringing in all of the flavors that you grew up eating at home with your granny,” Bates says. “We will put out a tray of pumpkin, and they sell out immediately.”

In addition to keeping the fall holiday spirit alive, as a Go Texan member, Tiny Pies takes pride in sourcing more than 70 percent of their ingredients locally.

“That’s one of the cornerstones of our business is to actually highlight what is seasonally produced locally,” Bates says. “And so right now pumpkin is one of those things that’s being grown and that we can get.”

While pumpkin pairs well with the ingredients used to make pastries, it is also popular in savory dishes.

“When I was offered to cater the 512 Brewing Party I was overcome with joy, so I decided to grasp the opportunity to throw in some nice autumn flavors,” Goldis says. “So I think that I did a pretty good job of capturing the very essence of a Brandenburg sunset on a cool autumn night.”

Pumpkin Mania Takes Over Austin and Beyond from Maria T. Roque on Vimeo.

Farms across the United States have expanded to meet the demand for the vegetable.

Acreage dedicated to pumpkin farming has increased by about one third in 10 years, according to the U.S. Department of Agriculture.

While the hot Central Texas weather is unsuitable for pumpkins to grow, farms and other establishments in the area buy pumpkins from the Western United States to sell during the October pumpkin season.

Elgin Christmas Tree Farm has been selling pumpkins since 2002. Their pumpkin patch offers families an opportunity to partake in fall activities such as pumpkin picking and hayrides.

Owner, Twyla Nash, says they do well with the pumpkin sales, and buy about a semi-truck and a half of pumpkins to meet the demand.

“We have not had a great increase, but we feel that the popularity of dealing with pumpkins, selling them, having pumpkin events, has increased,” Nash says. “So there’s more places for people to go to buy their pumpkins and to do different activities involving pumpkins. The wealth is spread out amongst different businesses.”

Within Austin city limits, Tarrytown United Methodist Church has been running a pumpkin patch every October since 1988 to help the church youth fund their summer mission trips.

Heather Heard is a lifelong Tarrytown United member. Heard started working the patch as an eighth grader, the first year it was started. Now, her daughter is in the youth program, and Heard continues to work the patch along with the youth and other parents.

Heard says she has seen an increase in pumpkin sales.

“The weather has been so nice that people tend to come out more as a family and buy more pumpkins,” Heard says. “I definitely think that there has been an increase in sales this year.” 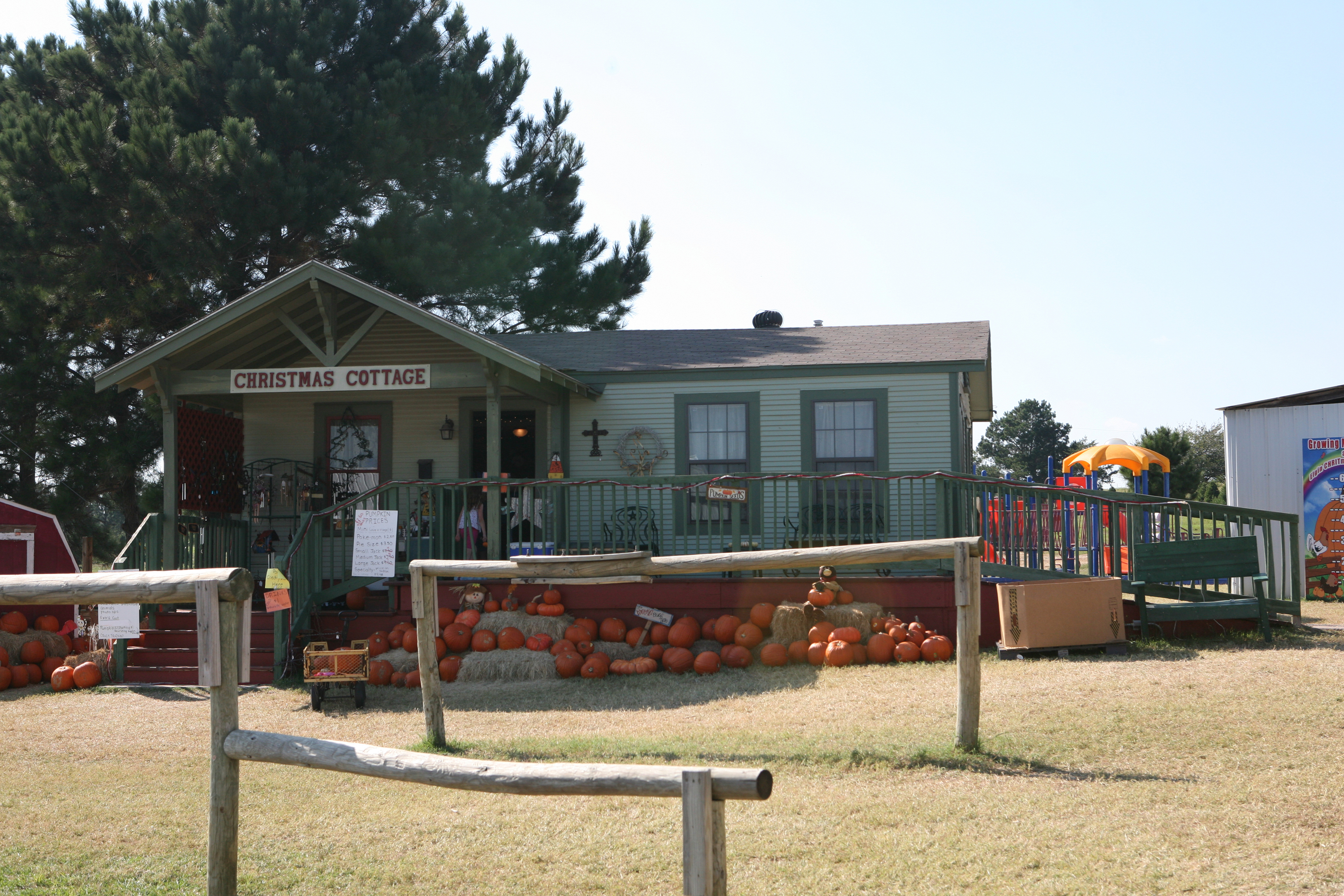 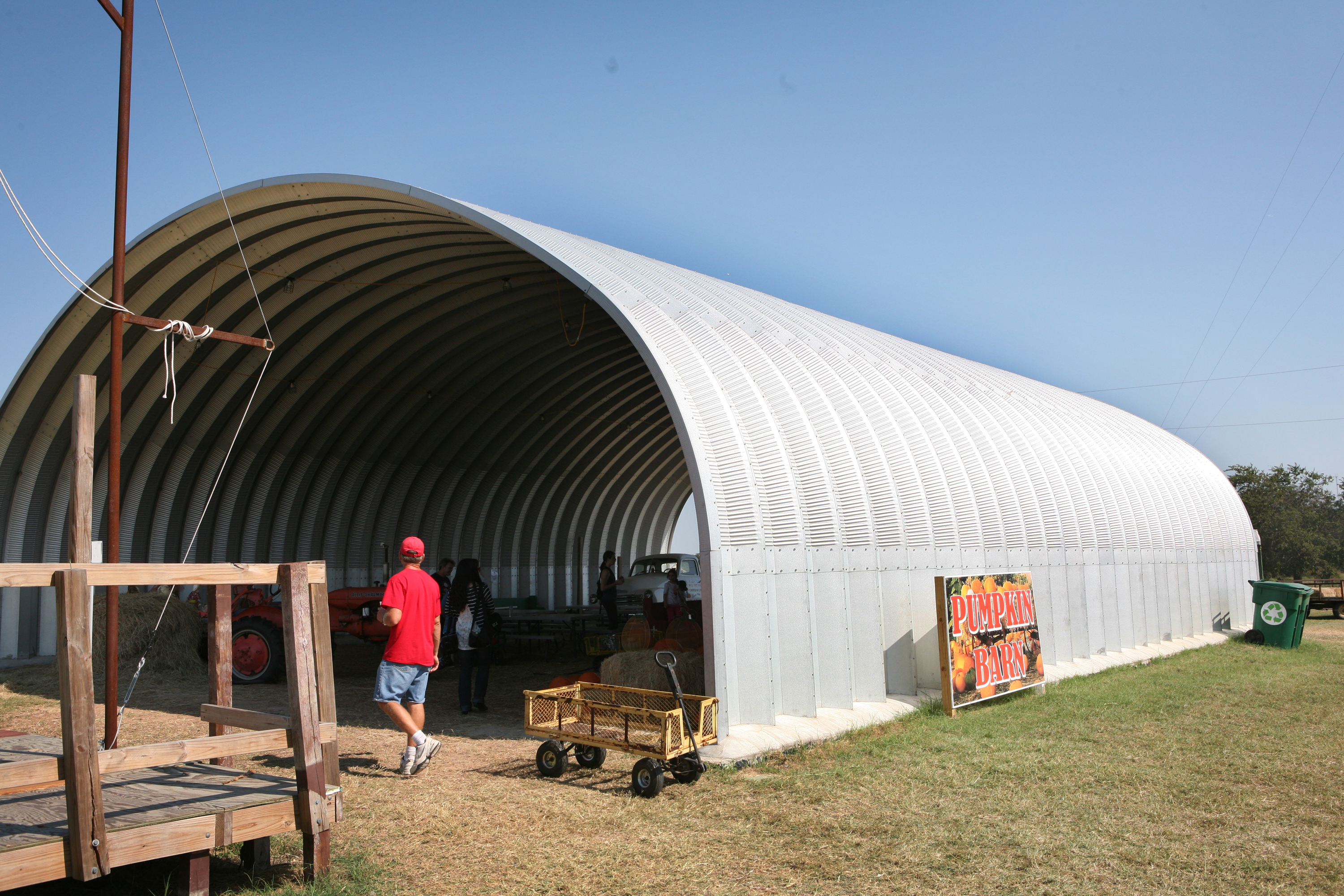 The owners of Elgin Christmas Tree Farm display their harvest of pumpkins inside a barn. (Credit: Jamie Justine Balli) 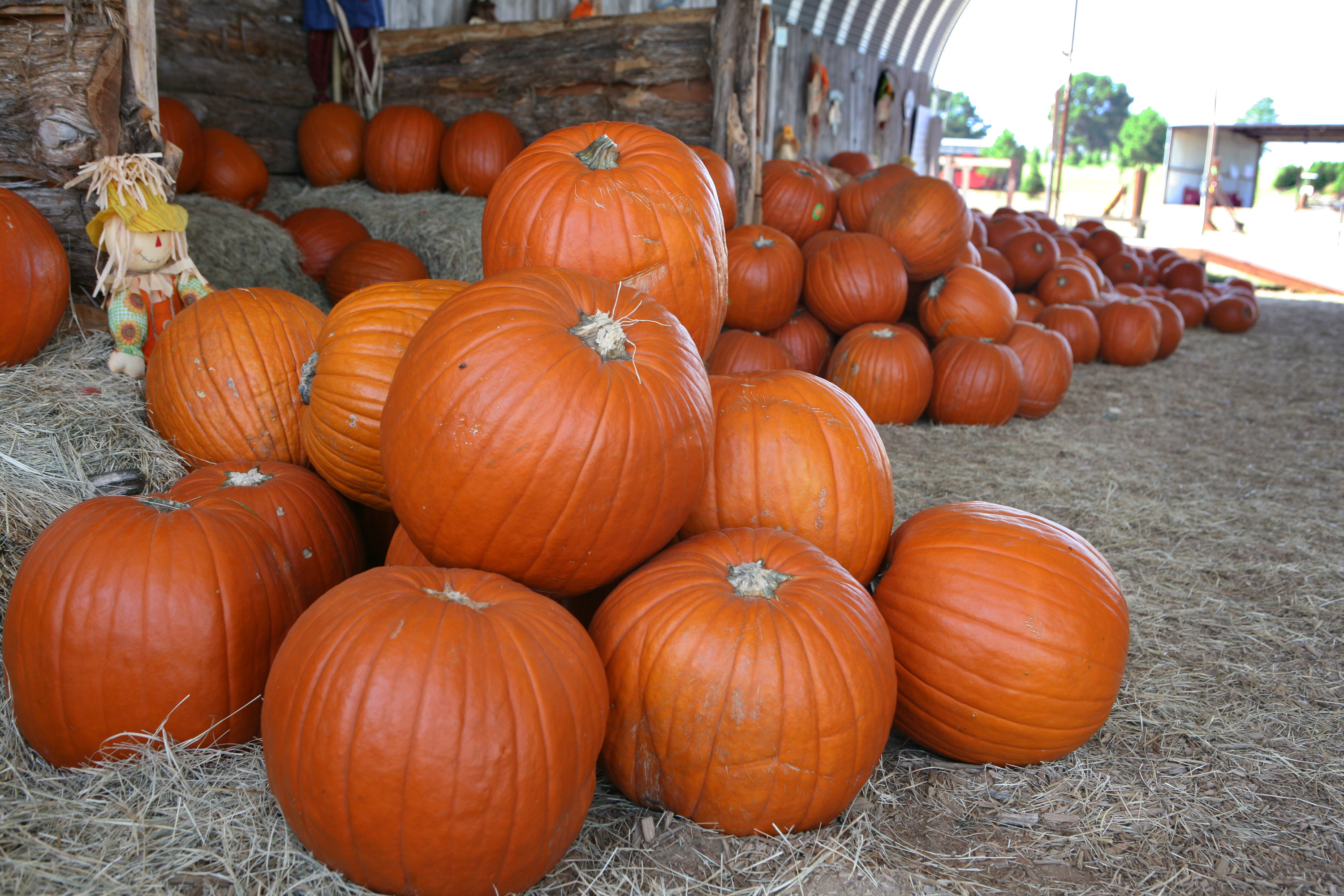 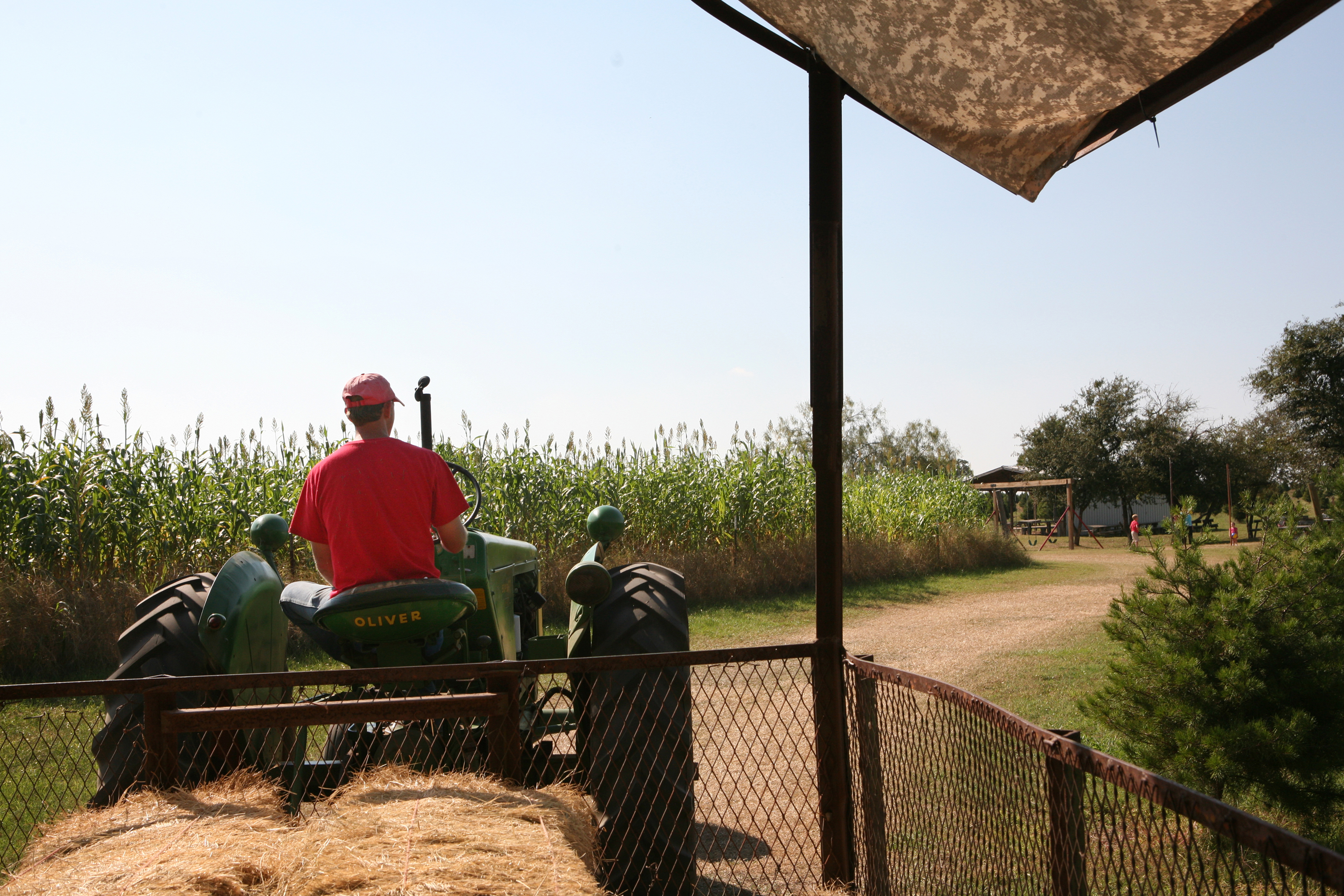 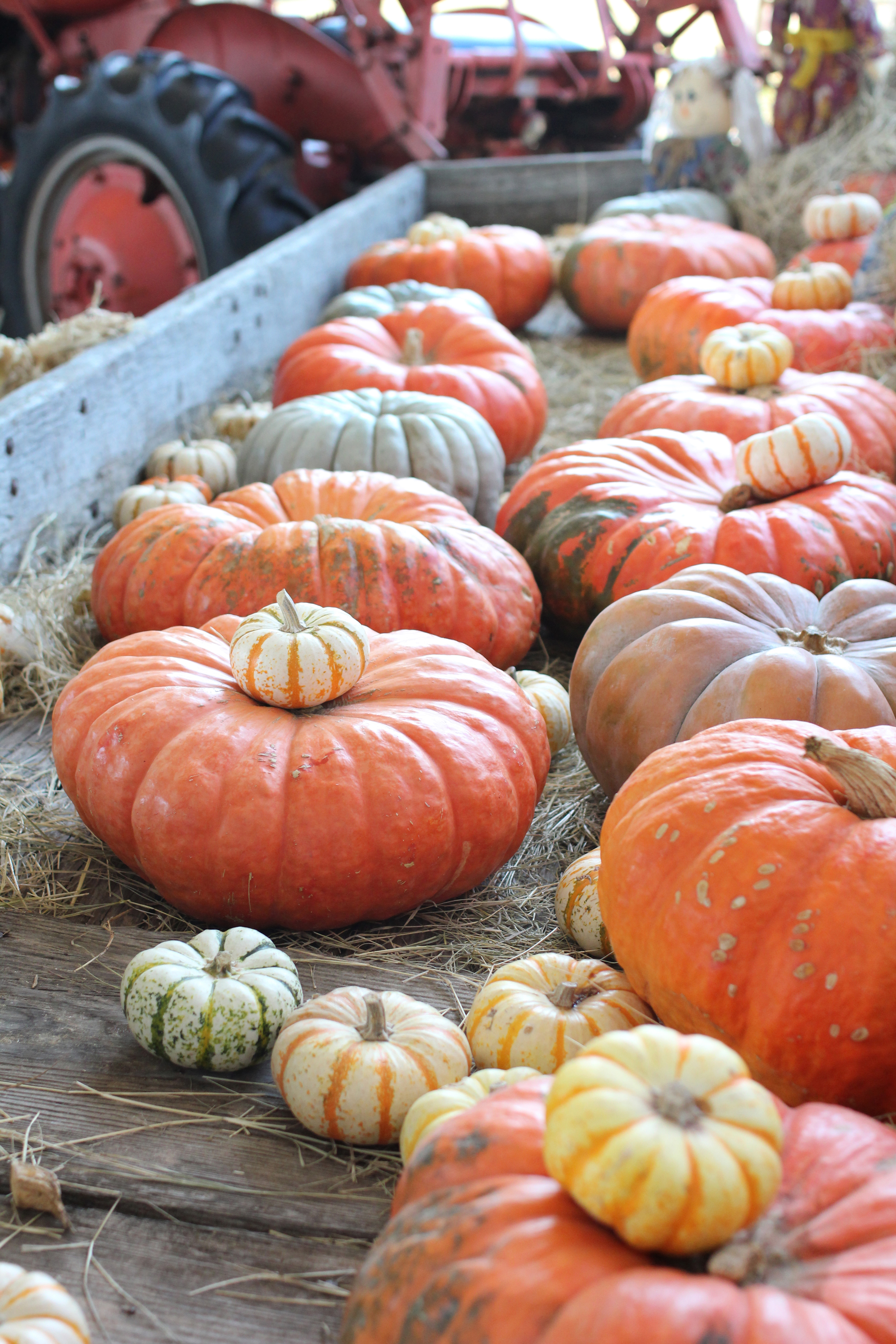 Heard says when the Tarrytown United pumpkin patch started they sold about a truckload of pumpkins. Now the church ships in two semi-trucks of pumpkins to sell—that’s 43,000 pounds of the vegetable.

“I think everyone comes and it has just become a family tradition for them,” Heard says. “They come and they take pictures and they pick out their pumpkins.”

Whether used for decorating and carving or baking and eating, pumpkins have become a staple of the fall season in the United States and in the heart of Texas.