Saying “I Do” and Graduating Too

For most people in college, planning a wedding doesn’t go further than making a “dream wedding” board on Pinterest and occasionally tuning in for a Say Yes to the Dress episode on TLC. While most students would scoff at the idea of getting married in college, a select few don’t cringe away from the idea, but rather embrace it. 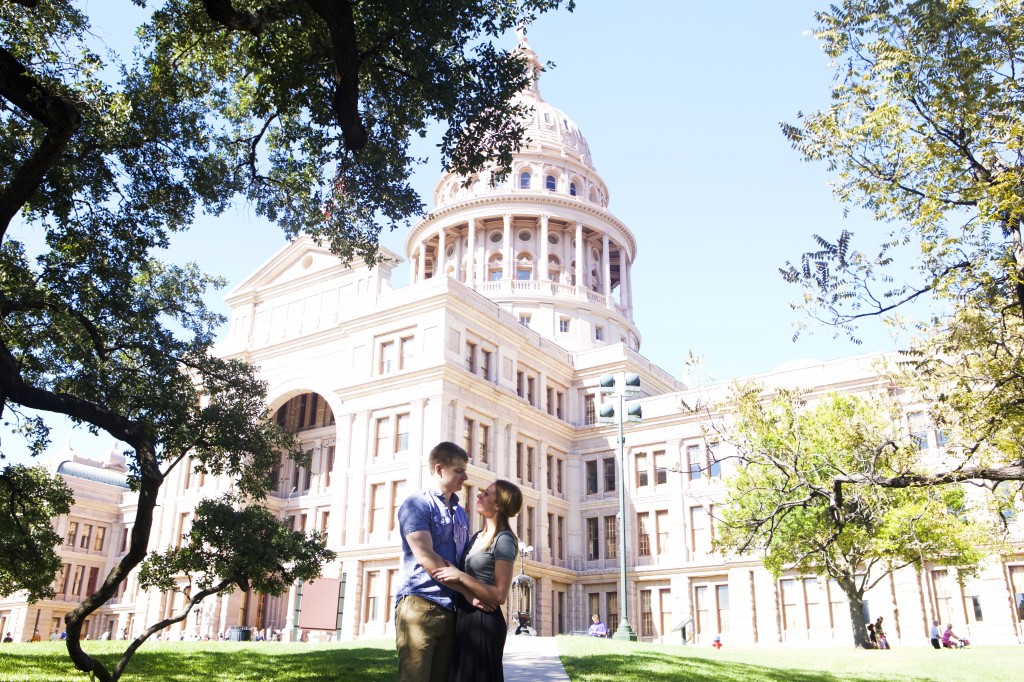 Cheryl and Ryan were married in January but got engaged while both were in college. Photo by Heather Dyer.

Student Kiera Dieter and her recently graduated fiance,Timothy Wallner, have no hesitations for their December wedding. For Wallner marriage was always the ultimate goal when he first started dating Dieter, even if it meant getting married before Dieter graduated.

“The people we hang out with aren’t that surprised because a lot of our friends are getting engaged too,” said Dieter. They receive shocked responses from fellow students and coworkers, but neither have been deterred from their decision to get married.

Dieter and Wallner aren’t alone when it comes to getting engaged while still in college. Jordan Acosta, a student from UT’s law school, joins the ranks after getting engaged to her fiance Salina Cram.

Having lived with her fiance for two years, she has no fears of things changing between them. “My mom always told me growing up: ‘Marry someone weird.’” Though her mother’s words come off a little vague, Acosta describes the advice as finding someone who tilts their head to the side and sees the world a little differently. Something she’s confident she’s found in Salina.

When asked why she wanted to get engaged, Acosta responds with a composed and thought out answer inspired by the movie Up in The Air, starring George Clooney. She realized, “It’s good to be responsible for someone other than yourself. Life is a lonely game if there’s no one to play it with.”

“It’s not uncommon to be engaged at 21, nor is it uncommon to not be married at 28. Everyone has a different timeline,” Acosta responds. 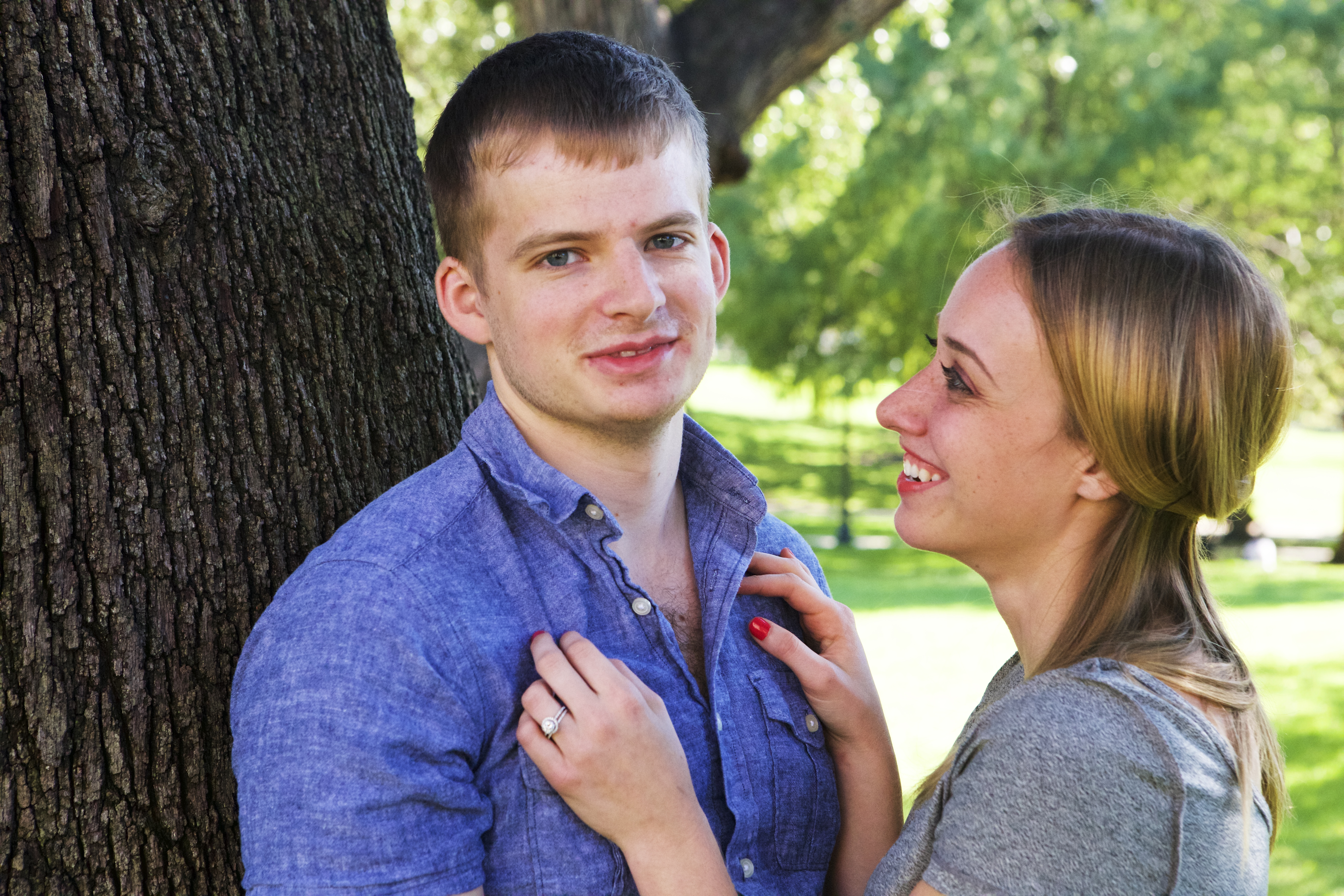 From 2008 until now, Cheryl only loves her husband more. Photo by Heather Dyer. 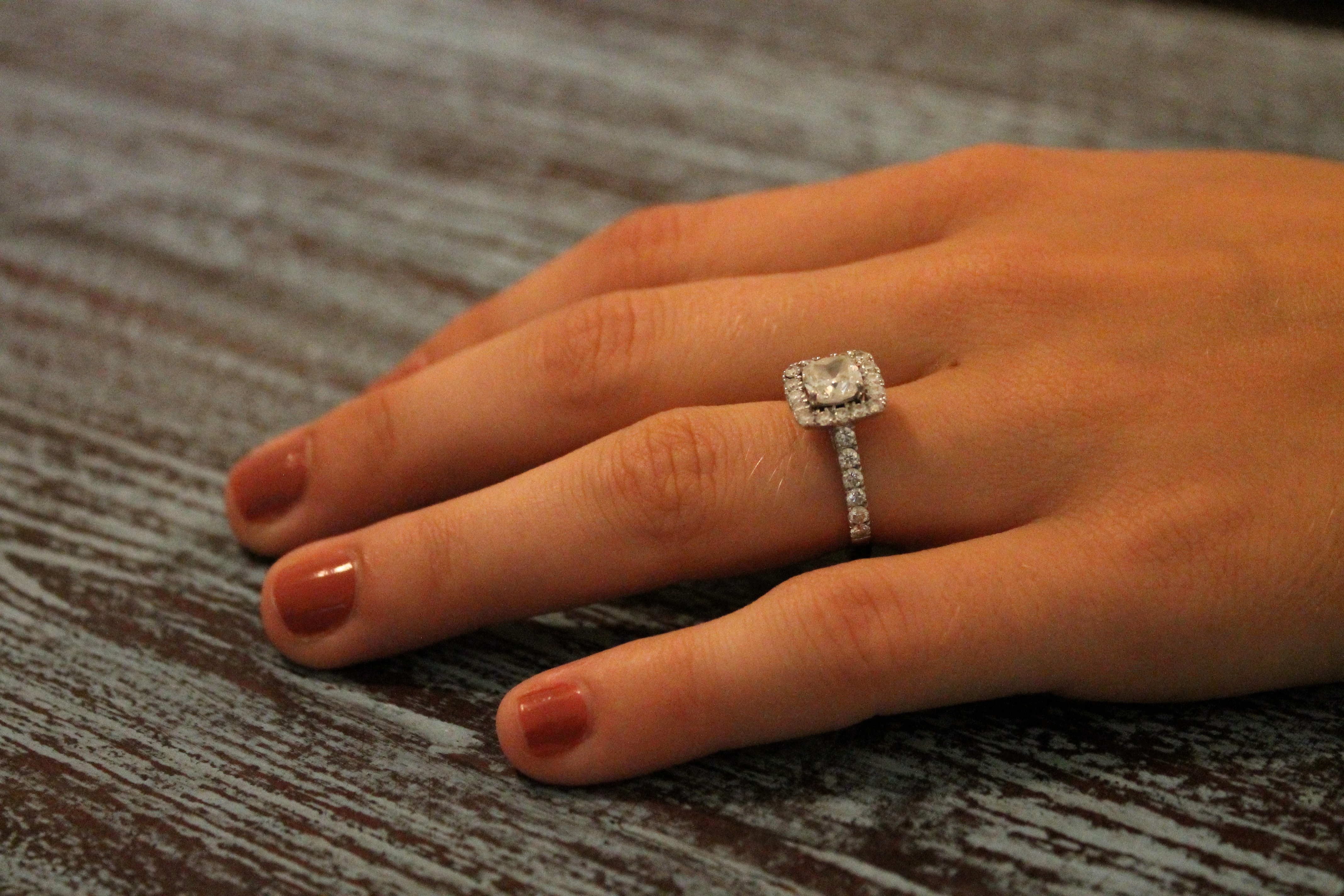 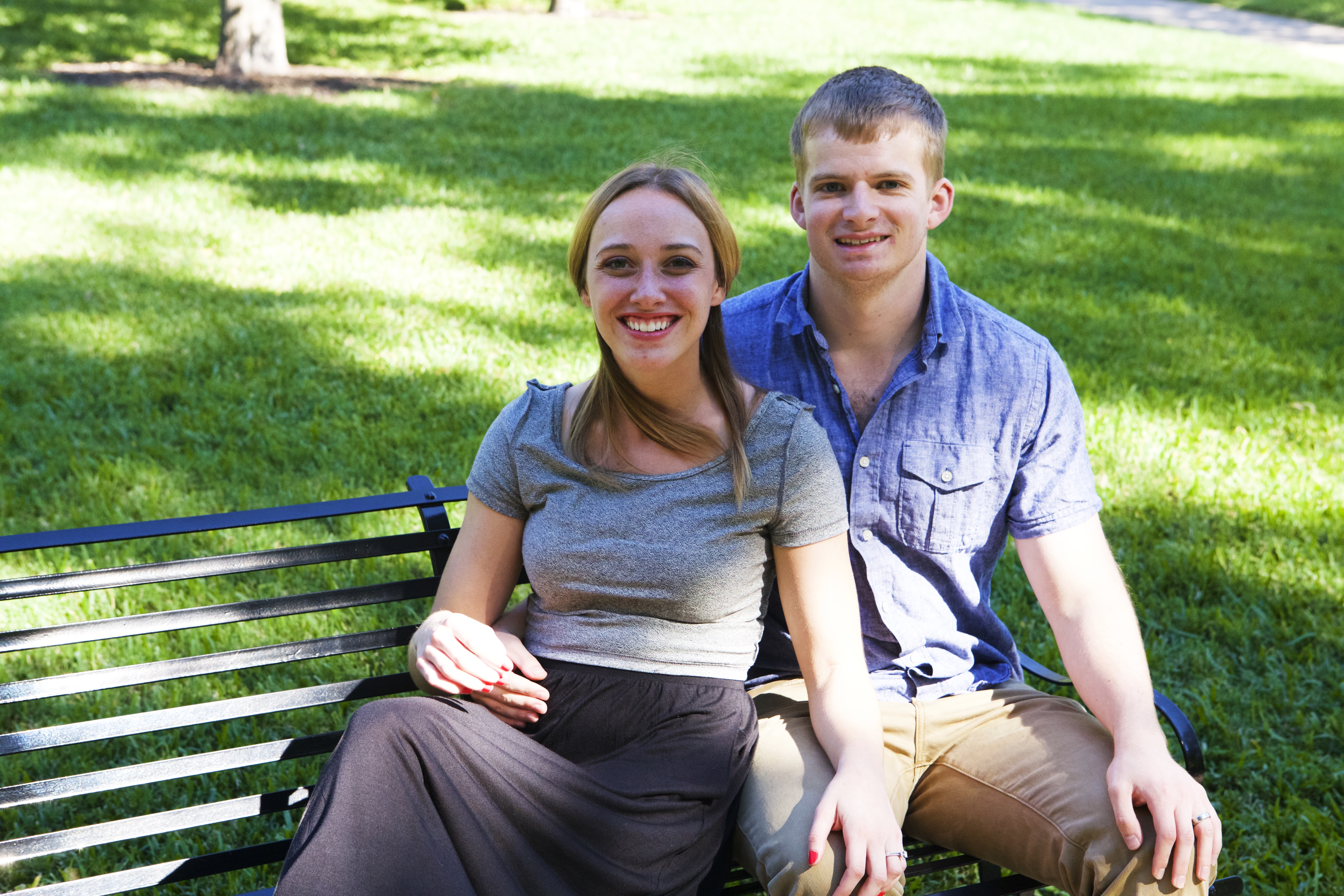 Ryan and Cheryl relax on the Capitol grounds. Photo by Heather Dyer. 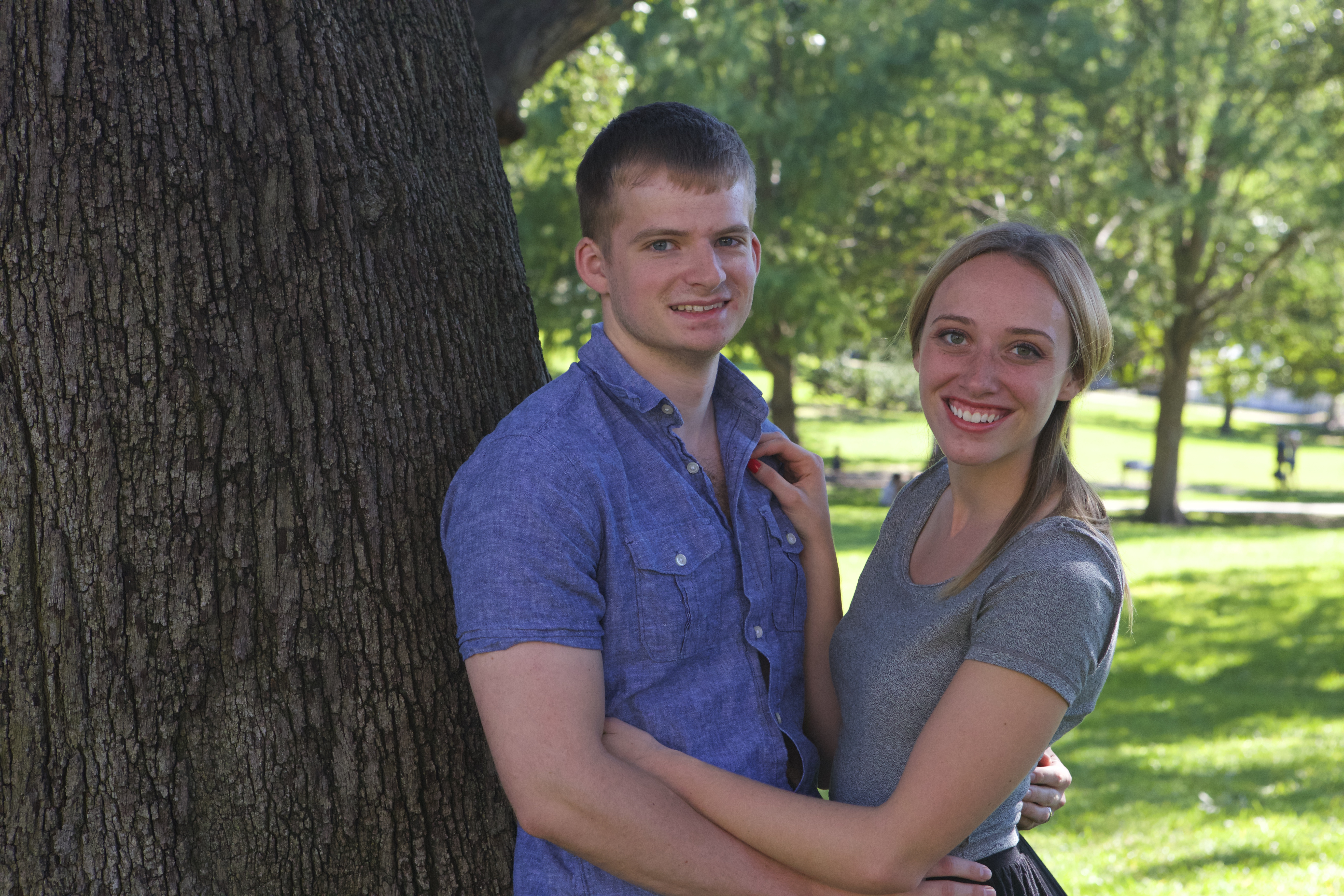 Cheryl and Ryan Willett pose at the Texas Capitol. Photo by Heather Dyer. 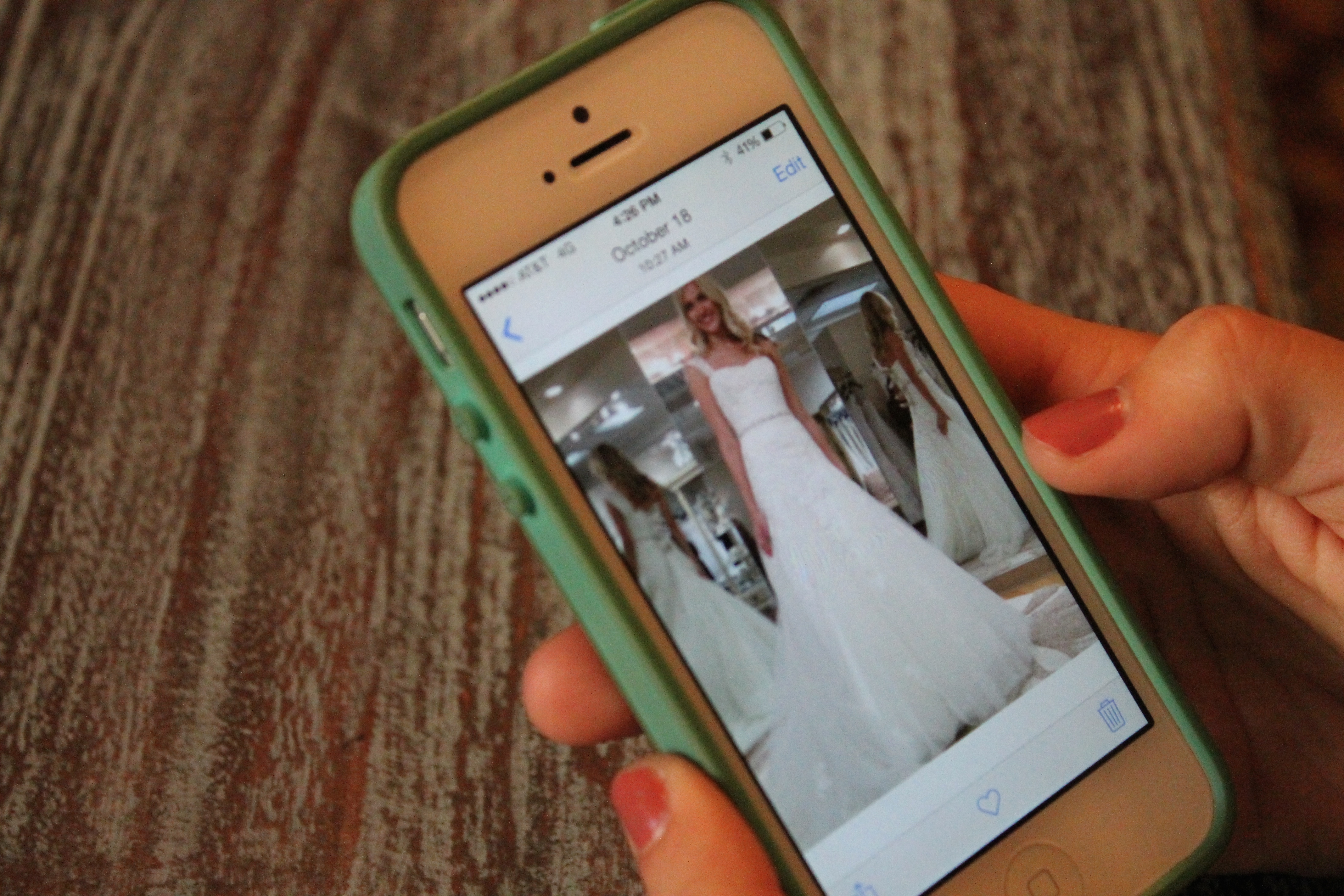 Celeste gives a sneak peek of her wedding dress that she just "said yes" to this past weekend. Photo by Briana Denham.

Ryan Willett stares at his wife of almost a year and still looks head over heals in love. Photo by Heather Dyer. 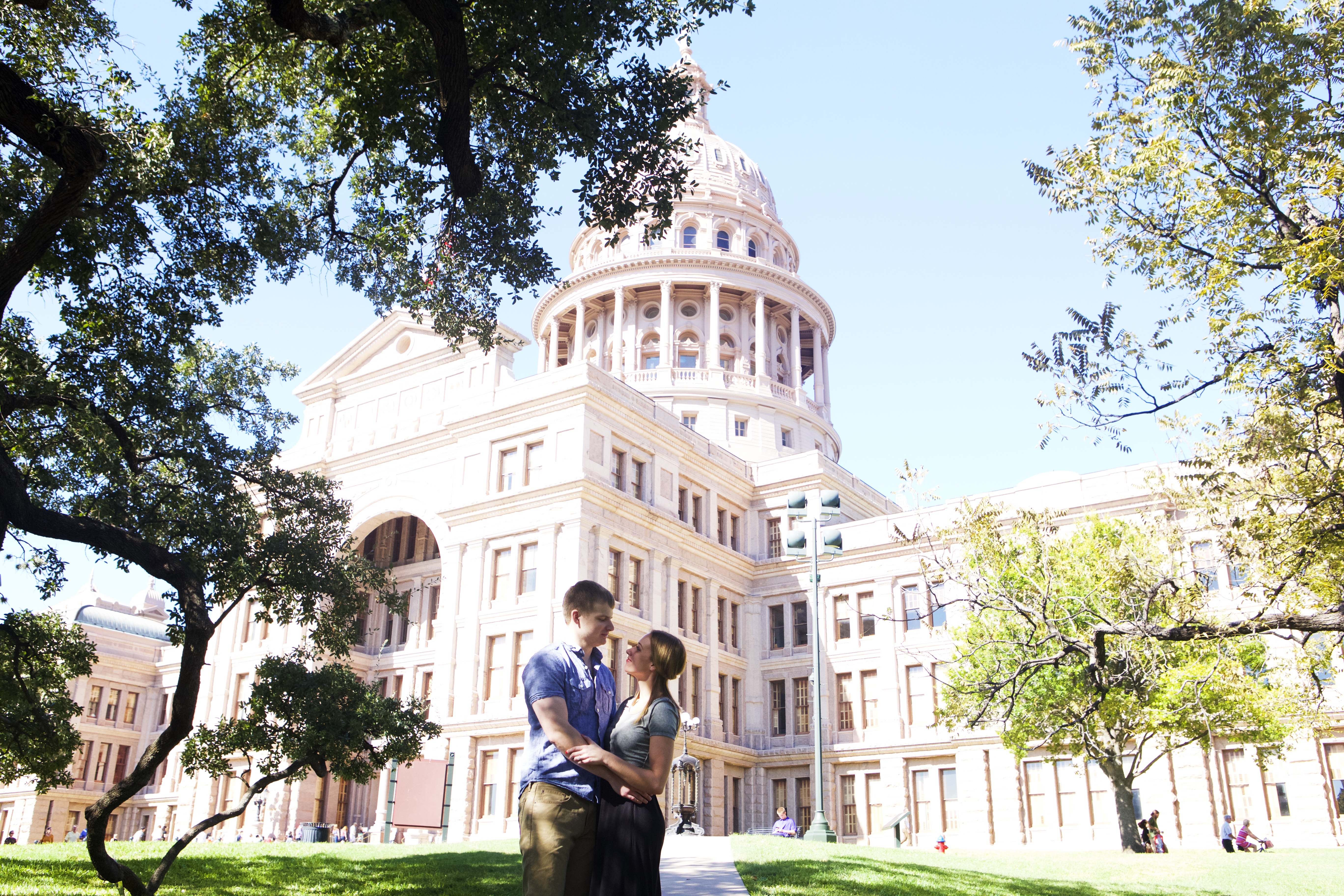 Ryan and Cheryl pose with the Texas Capitol as their backdrop. Photo by Heather Dyer. 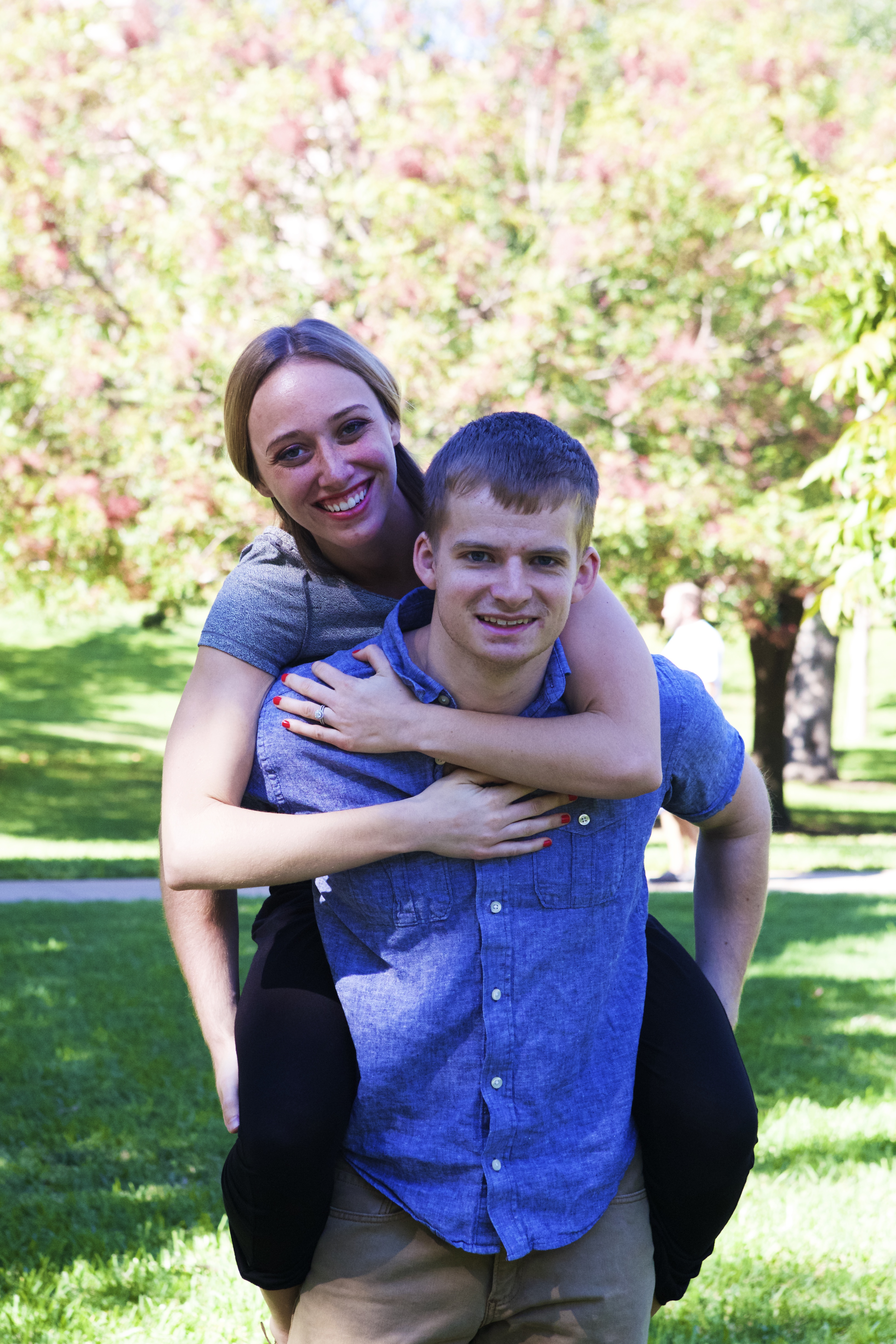 Even when times get rough in their marriage, Cheryl always has Ryan's back. Photo by Heather Dyer. 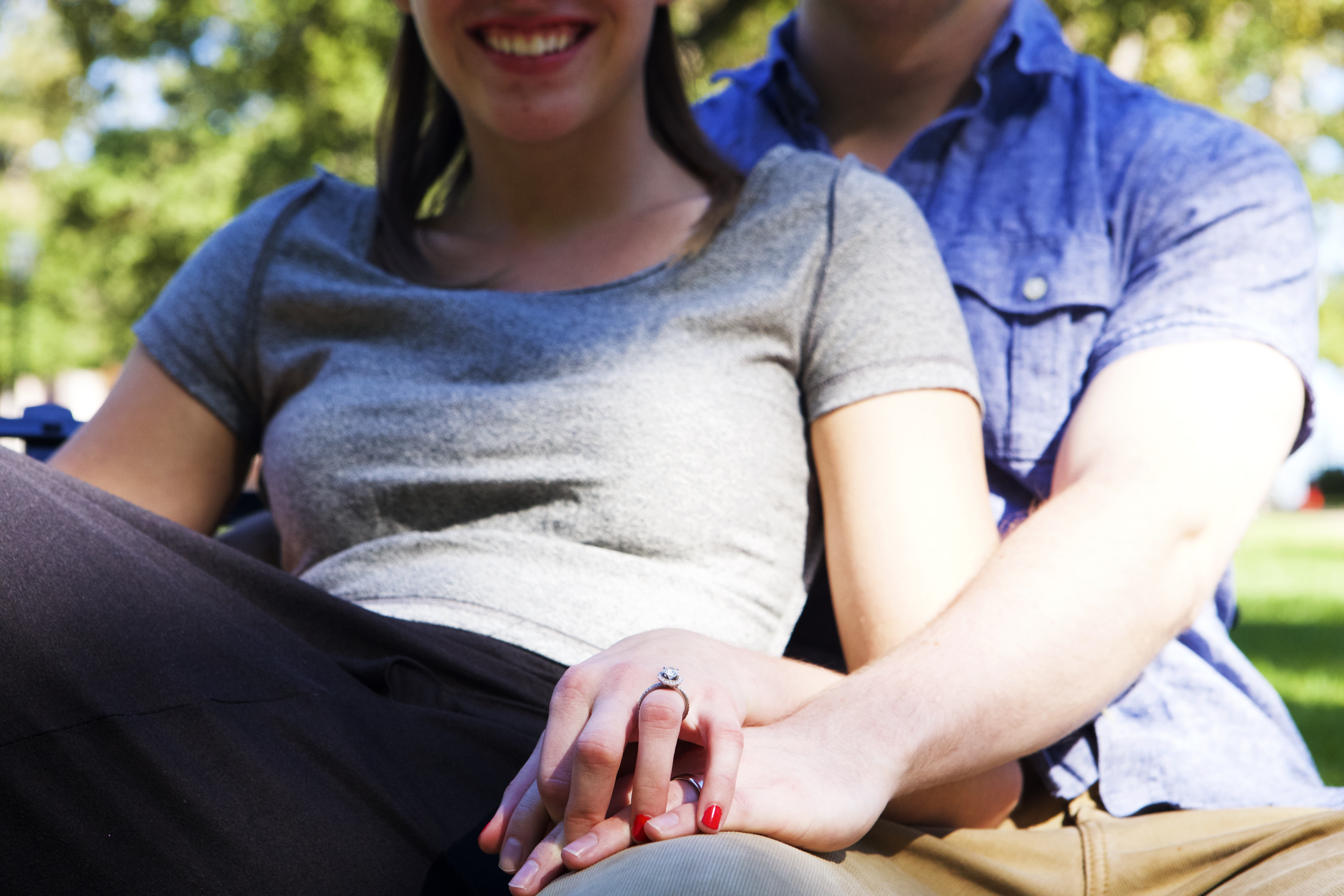 Cheryl shows off her ring that Ryan picked out back in their hometown of Kansas City, Missouri. Photo by Heather Dyer.

For Cheryl and Ryan Willett, that timeline occurred during their senior year at UT. After returning back to Austin from their hometown in Kansas City, Ryan Willett proposed to Cheryl McGiffin, at the time, as he came down the escalators at the airport.

“I knew I wanted to do it in a semi-public place because I knew you would like the crowd,” he jokes while looking at his wife.

By October they started planning their January wedding in Kansas City all the way from Austin as they finished up their fall semester. Cheryl Willett admits it was crazy juggling both the wedding planning and schoolwork, especially as an architecture major.

Similar to Dieter and Wallner, neither of the Willet’s friends were shocked by proposal. The most humorous responses came from Cheryl Willett’s architecture friends.

“The idea of being married or even being engaged in college was so shocking to them. So one of the girls was like ‘wait so are you two going to like, live together once you guys get married’ and I was like ‘um do your parents live together?’”

From the perspective of both Ryan and Cheryl Willett, there hasn’t been much of a transition into married life.

“A lot of my single friends think of this huge you got this whole other person now living with you, but they don’t see it from the perspective that you’ve dated and developed a relationship with someone for years,” says Ryan Willett.

From a professional stand point, Dr. Susan Jennings states that marrying while in college can have positive and negative consequences for many reasons.

If each person is mature psychologically, marriage can be a great thing between younger individuals. If either one isn’t, it can be disastrous. “Marriage requires attending to the needs of another person as well as oneself. A lot of understanding, generosity of spirit, and compromise will be required. These pressures will expose the character and maturity as well as weaknesses of an individual and will force a person to stand up and grow, or not,” Jennings states. 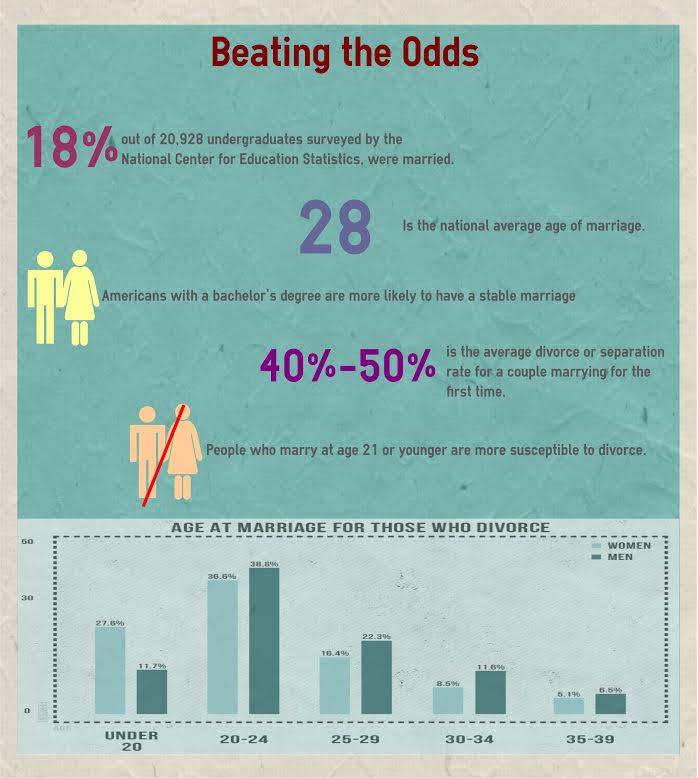 If a couple is mature and committed to staying together, they have the opportunity to grow up together and build their futures with the one they love. Most college students who get engaged and married before graduation are aware of these struggles while preparing for not only a wedding, but for a life together.

“I expect there to be tension at times because this is something new, but I also think that through that tension we’ll get to know each other better. And that’s one of those things we have to remember because if we forget it, it’s going to tear us apart,” says Wallner.

Celeste Krimsky admires the ring her fiance, Christian Guth, proposed to her with this August. Photo by Briana Denham. 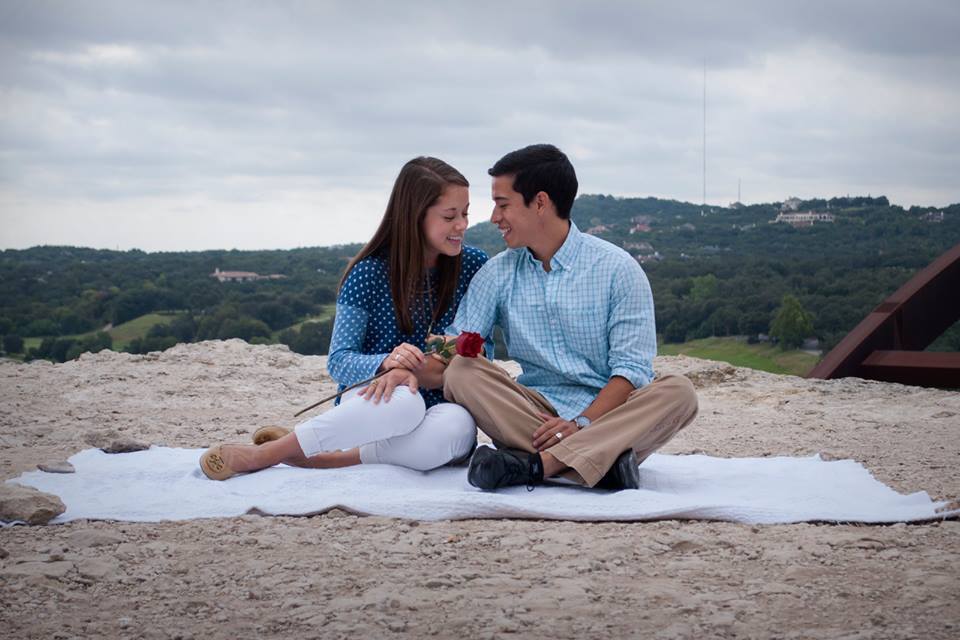 Dean Luttrell and Beth Vaca can’t help but moon over each other moments after Dean proposed. Photo by Beth Vaca. 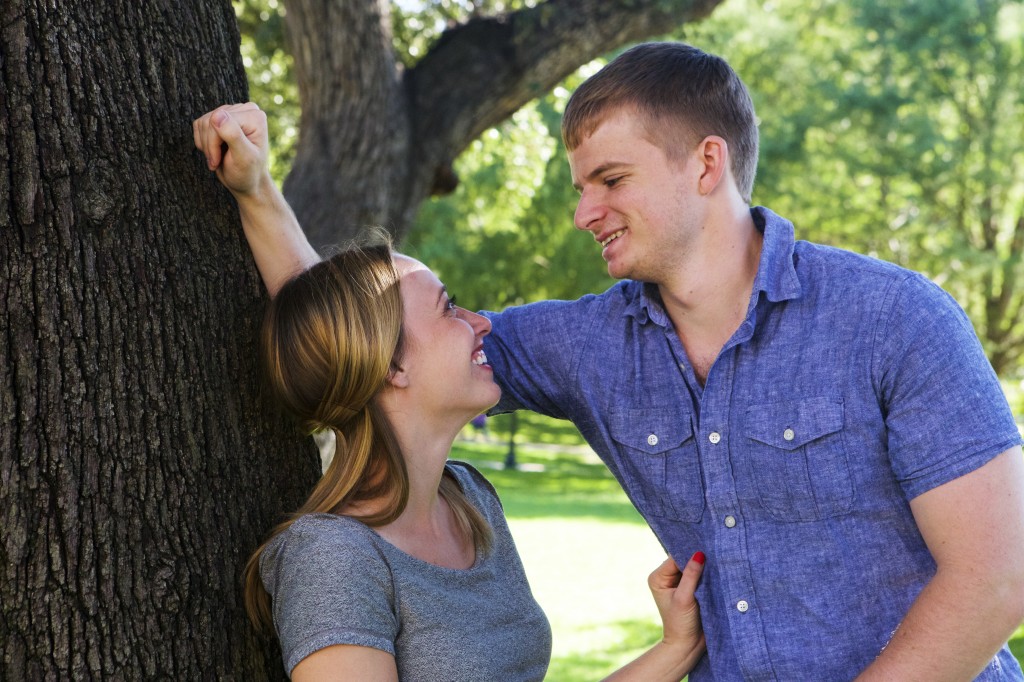 Even after being married for almost a year, Cheryl and Ryan Willett still can’t get enough of each other. Photo by  Heather Dyer.

← Pumpkin Mania Takes Over Austin and Beyond
Baking a Difference →