Some people “pay it forward,” but this organization “challahs back.”

It’s 3:30 p.m. on a Tuesday. A student lugging a heavy backpack pauses for a moment to breathe in the tantalizing scent before crossing the street. There’s something cooking in the building on the corner of 21st and San Antonio St., but he isn’t quite sure what.

Through the doors of Texas Hillel, down a long hallway and past an extensive meeting room lies a kitchen. UT students donning chef hats are scattered throughout as 90’s pop music blares over the clanging of pots and pans.

By 6 p.m. the kitchen will be cleared out and more than 70 loaves of challah bread will be neatly wrapped and ready to sell in West Mall the next day.

This is how the national non-profit organization Challah For Hunger operates. 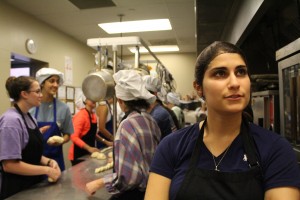 Cari Cohen serves as president of Challah for Hunger. One of her main jobs is to ensure the group has the right amount of ingredients the recipe calls for. (Photo by Landon Pederson)

“I think Challah For Hunger is a great because it’s both social justice and fun at the same time,” says chapter president, Cari Cohen.

The Texas Hillel is home to one of the many Challah For Hunger chapters across the United States. Founded in 2006, the UT Austin branch has raised thousands of dollars to help fight hunger in both Austin and Africa. By selling challah for $5 in the West Mall, they are able to give upwards of $200 per week to MAZON: a Jewish national non-profit organization, as well as the local food bank. 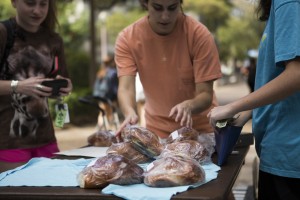 Members of Challah for Hunger say it only takes two hours to sell all of the bread they make for the week every Wednesday on the West Mall. (Photo by Omar Longoria)

Although challah is a traditional Jewish bread eaten on holidays, both Jewish and students of non-Jewish descent are invited to Texas Hillel to prepare, braid and decorate challah bread to help raise money for humanitarian aid.

“If they’ve never heard of challah before, we explain to them that it’s an egg-based, really sugary, awesome bread that’s based in the Jewish faith,” says Challah for Hunger member, Hillary Haspel.

Incorporating ingredients such as chocolate, cinnamon and their “fun flavor” each week, the bread has become popular among students from all backgrounds – even the ones who pronounce the “c” in challah.

“Not only does it taste amazing, it goes to a really awesome cause,” says Haspel. 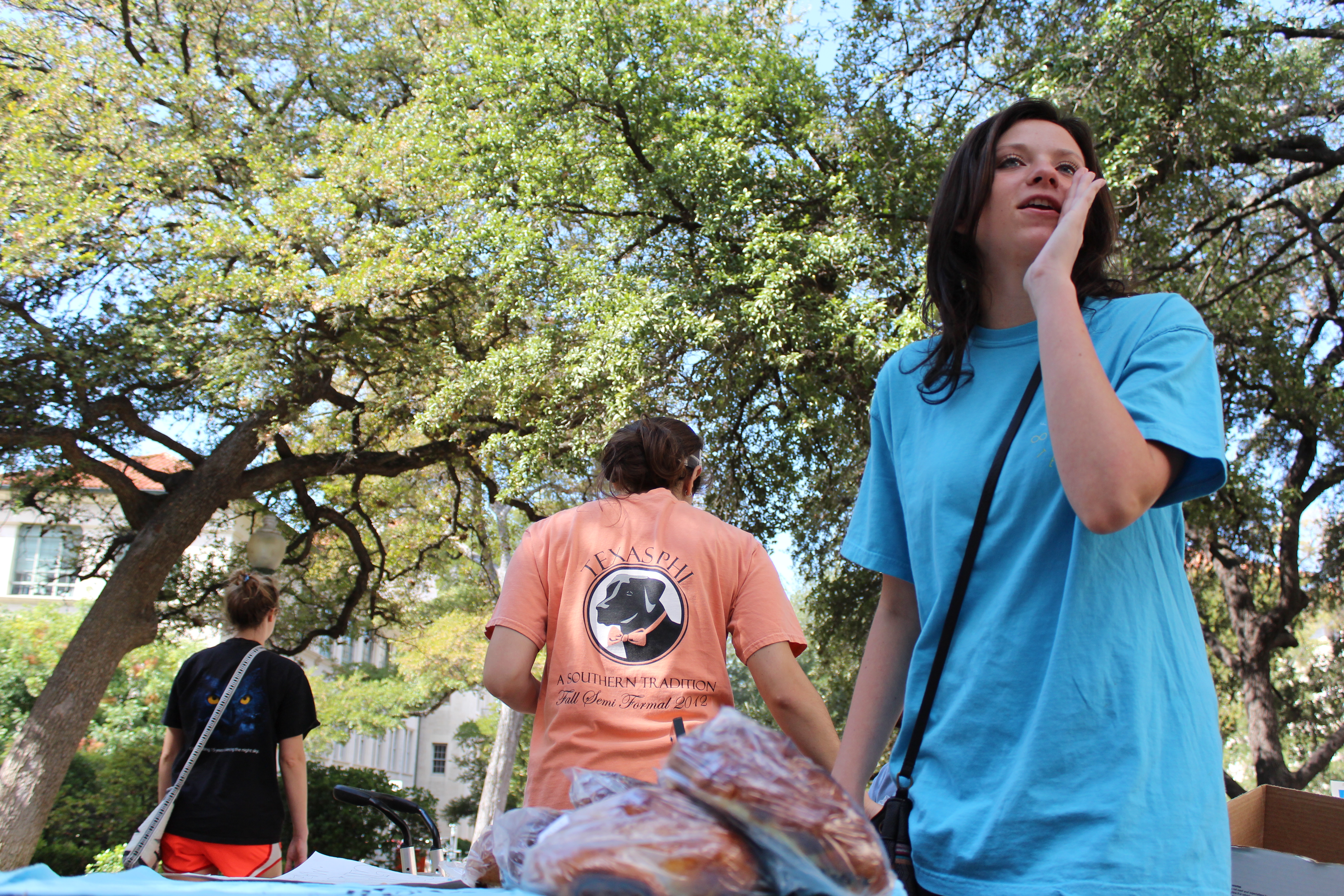 Hillary Haspel (not pictured) says everyone has different tactics when selling the challah, but adds that shouting is a lot of people's favorites. (Photo by Omar Longoria) 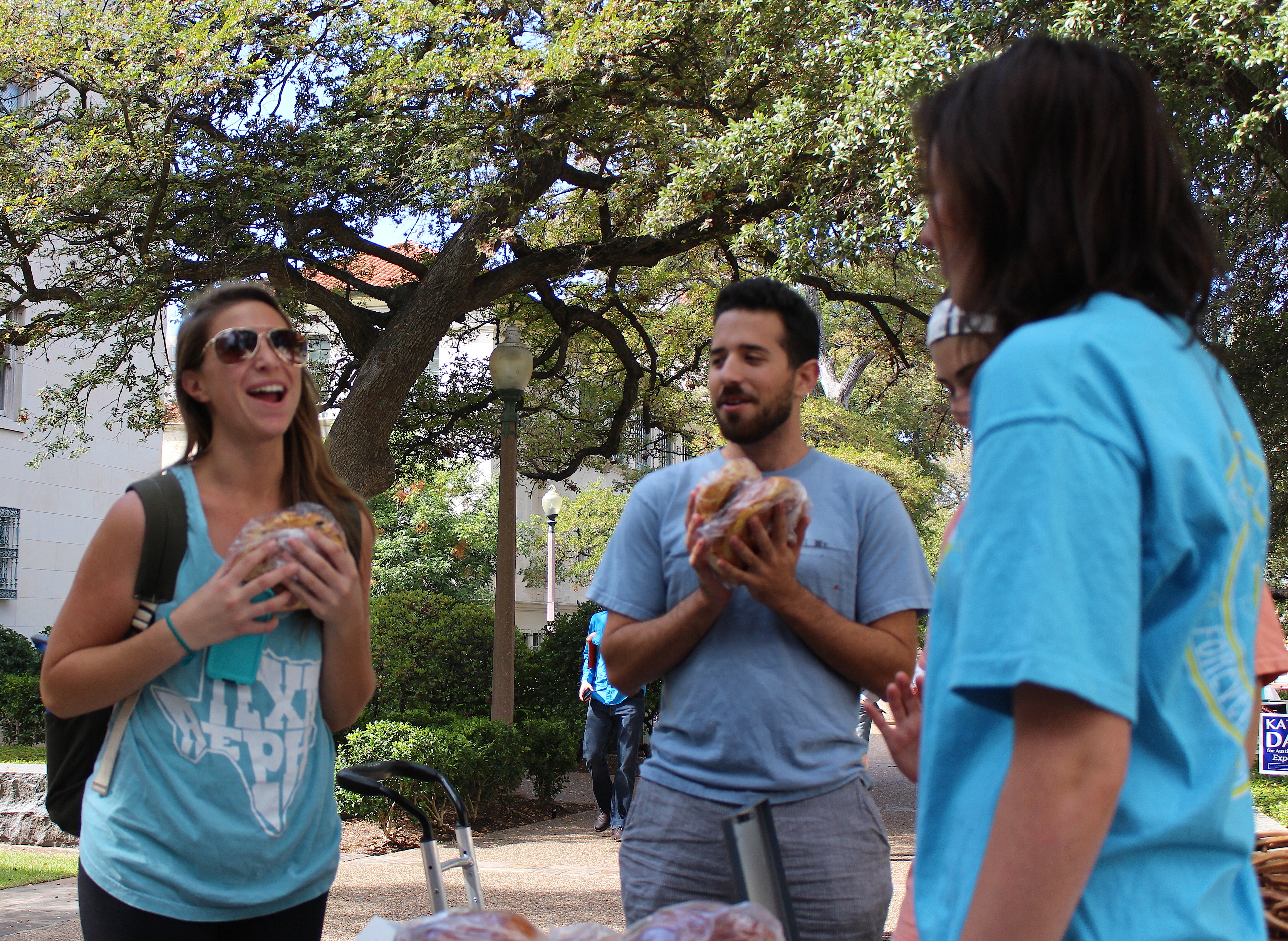 A student stops by the Challah for Hunger table and can't help but to hug the bread she just bought. (Photo by Adam Beard) 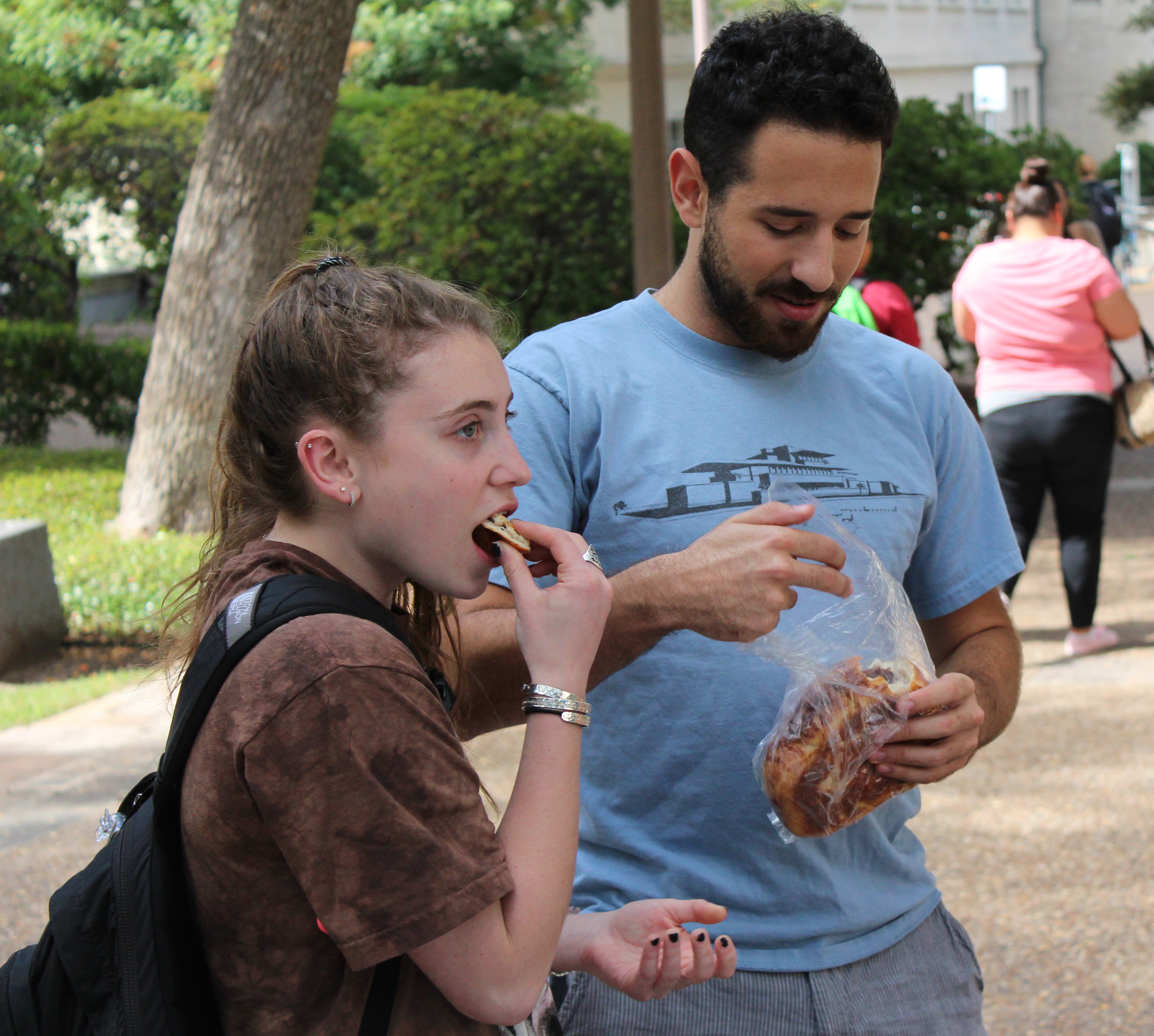 Several students stop by the Challah for Hunger table located on the West Mall to grab a quick snack before class. (Photo by Adam Beard) 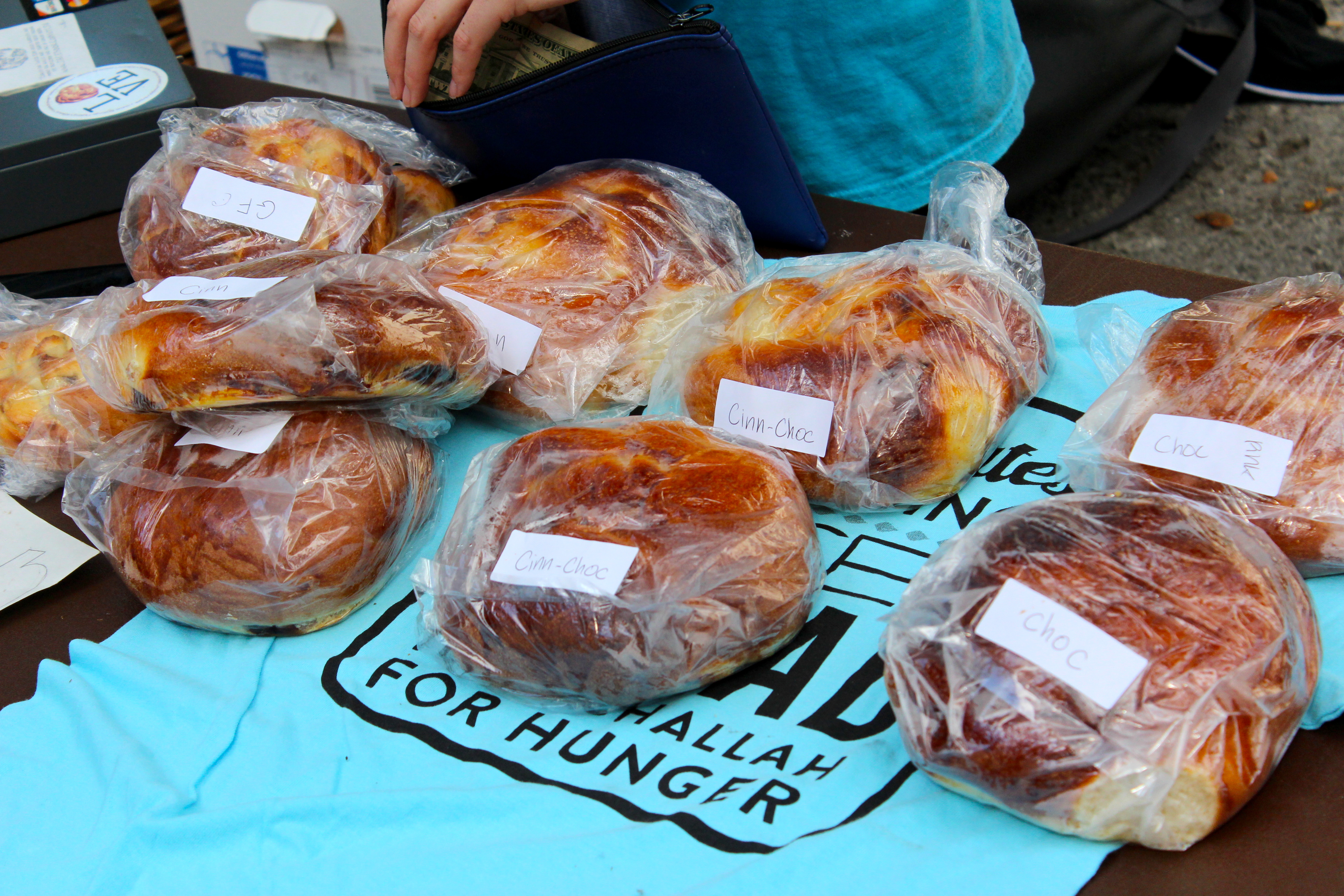 The different kinds of Challah are on display each week from 12-2 p.m. every Wednesday on the West Mall. (Photo by Adam Beard) 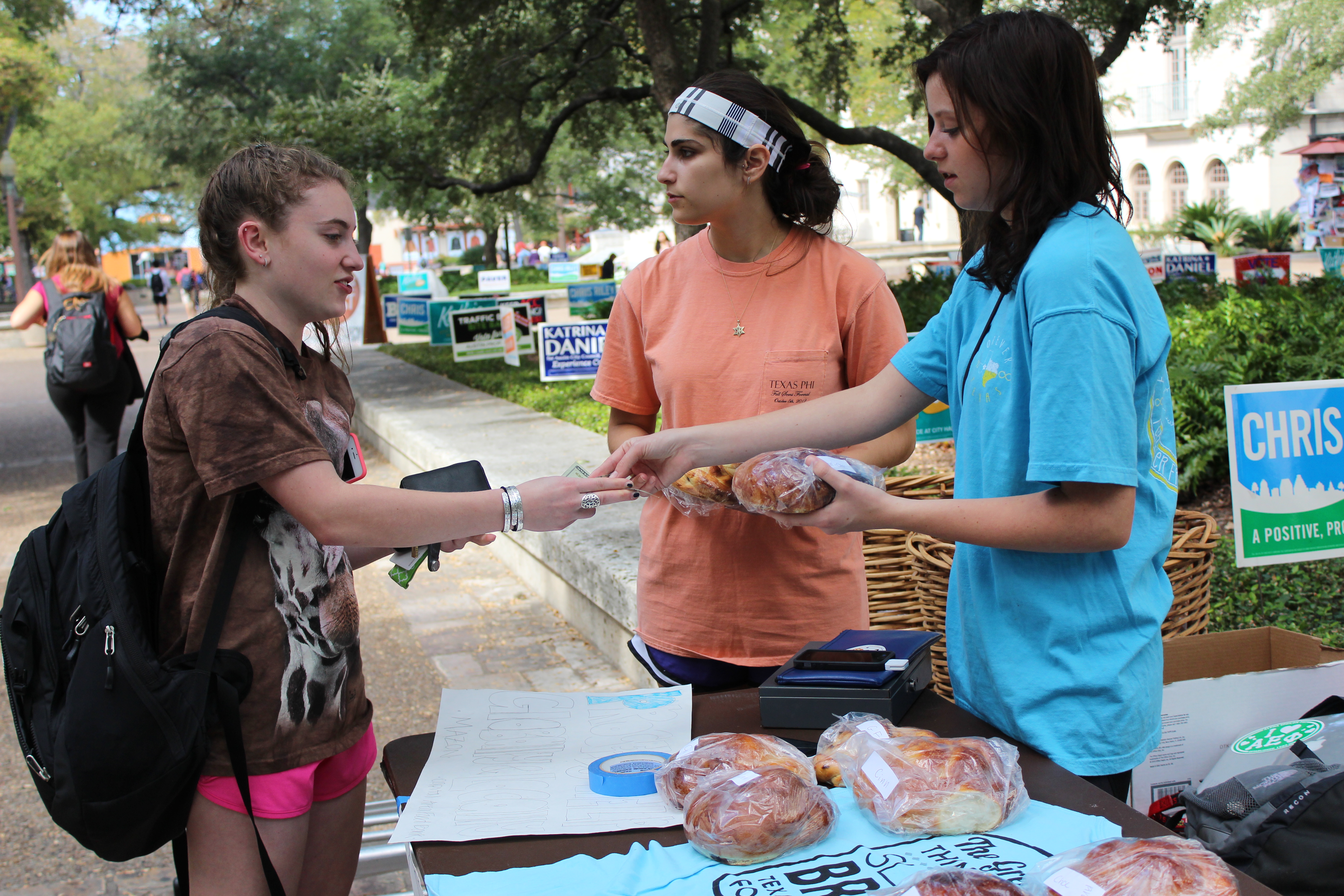 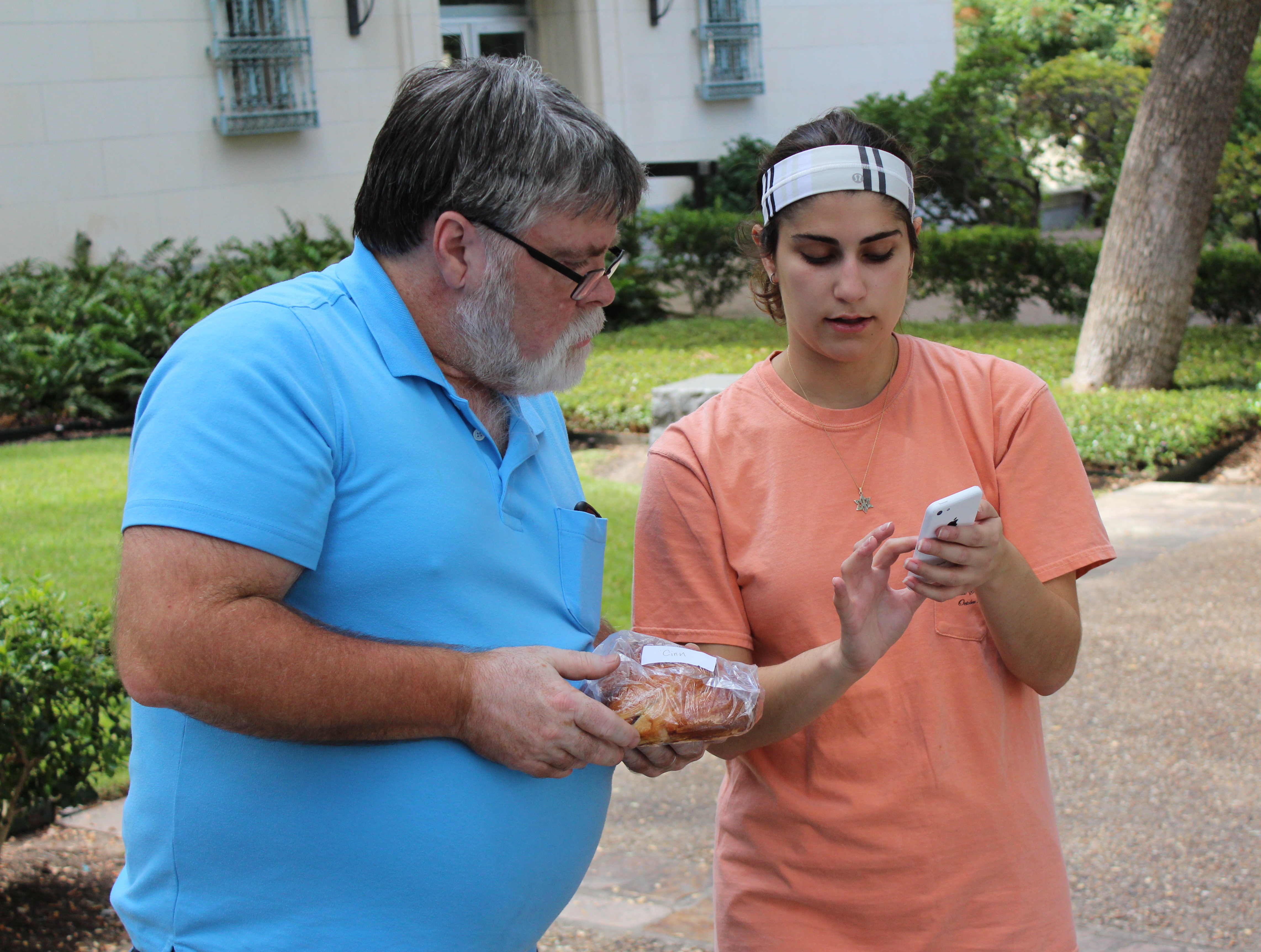 Cari Cohen, the president of Challah for Hunger, shows a customer the option of preordering challah bread directly from his iPhone. (Photo by Adam Beard) 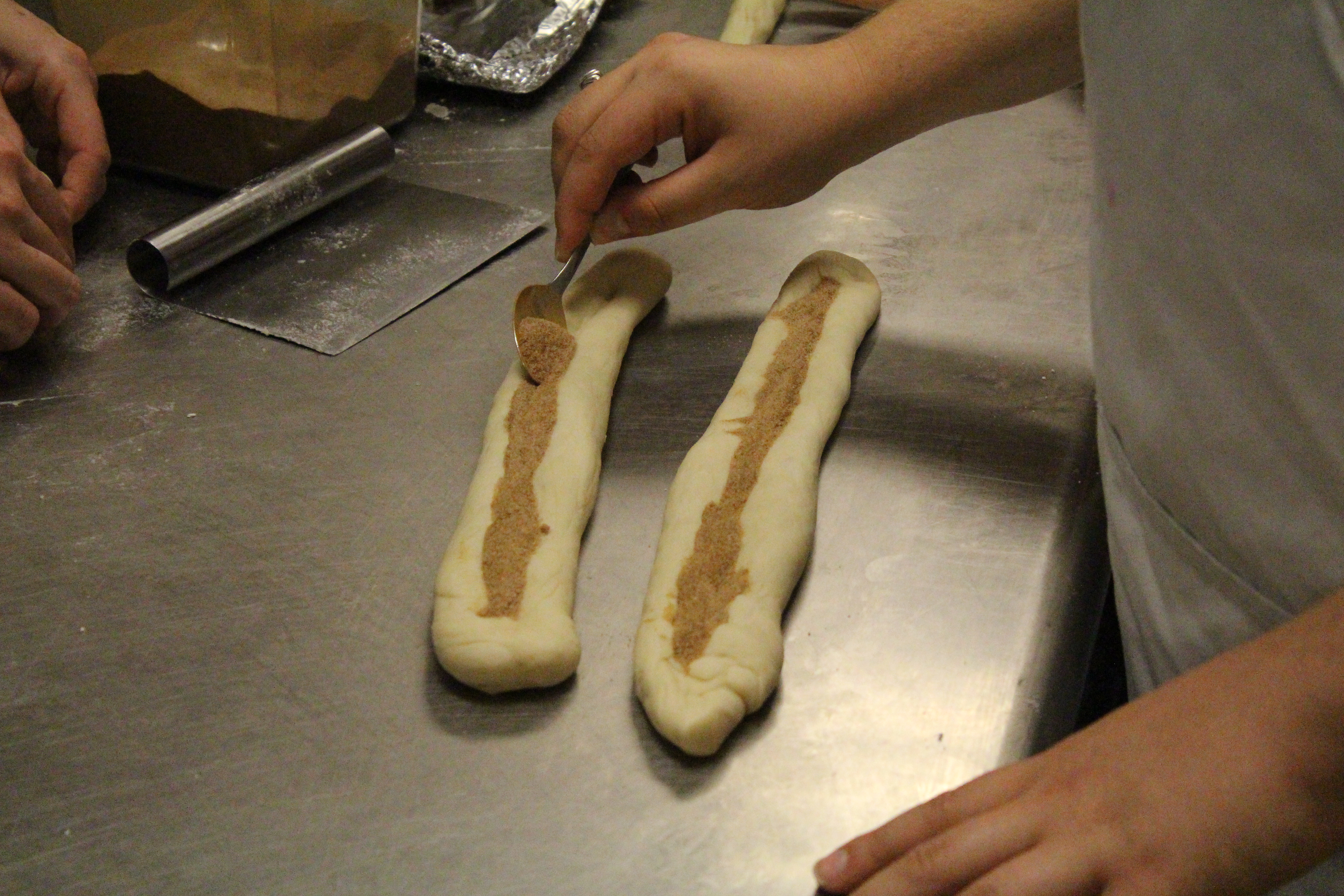 A member of Challah for Hunger gently pours spoonfuls of cinnamon inside the challah dough before braiding it and placing it in the oven. (Photo by Landon Pederson) 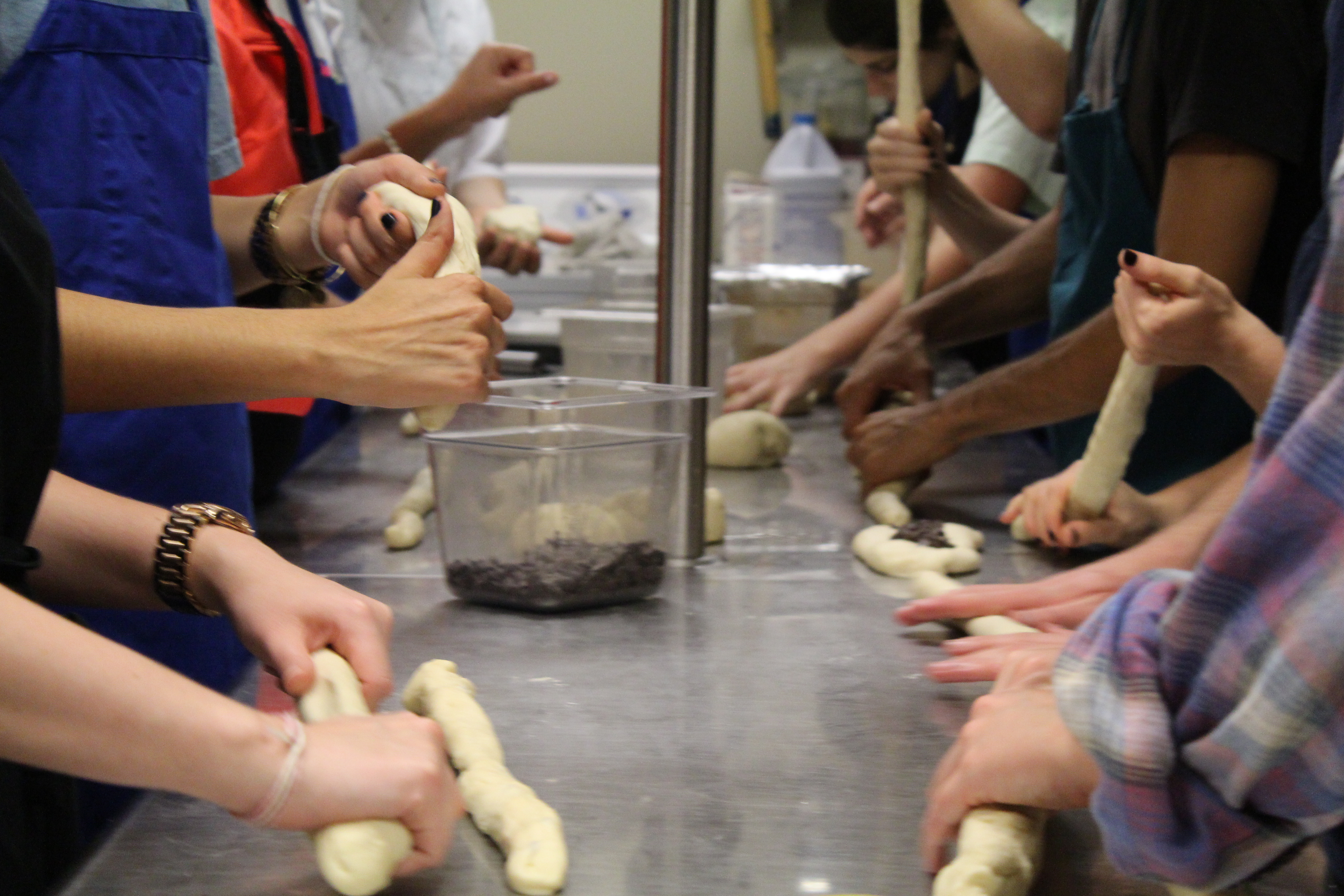 About ten to 15 members of Challah for Hunger get their hands messy with dough every Tuesday from 3-6 p.m. at the Texas Hillel kitchen. (Photo by Landon Pederson) 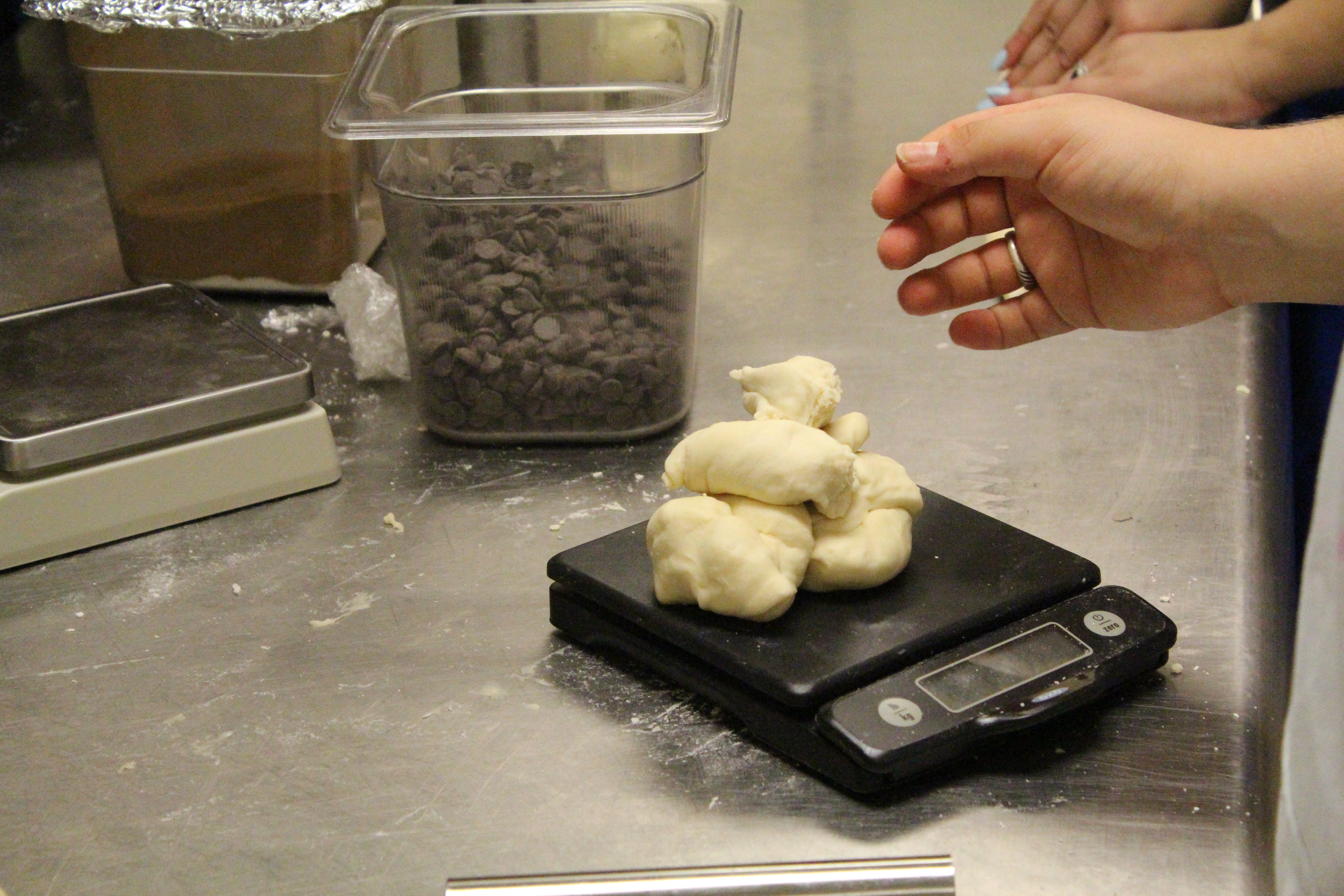 Being precise is key in the baking process. The challah bread the organization bakes comes out to weight one pound. (Photo by Adam Beard) 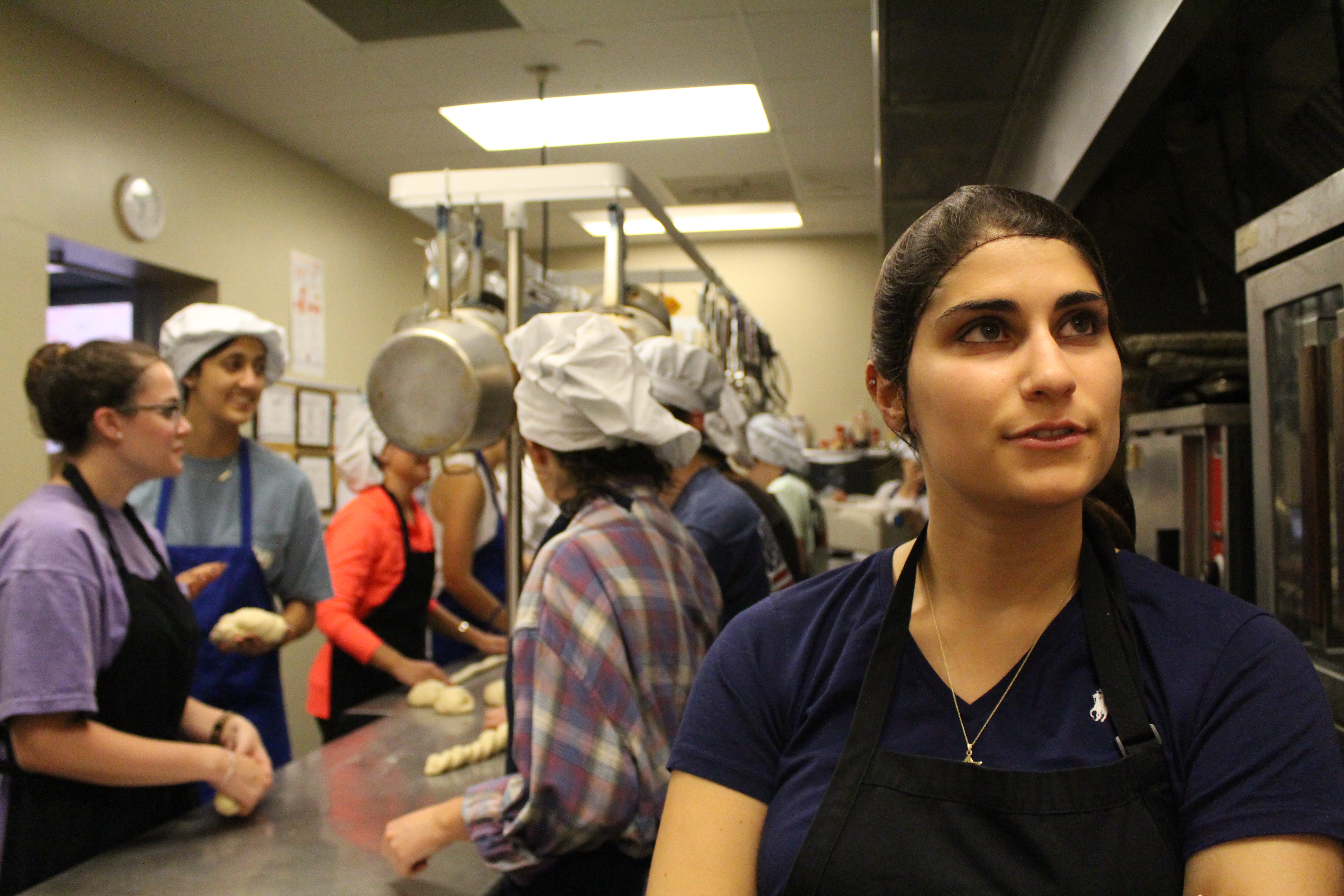 As president, one of Cohen's main jobs is to ensure the group has the right amount of ingredients the recipe calls for. (Photo by Landon Pederson) 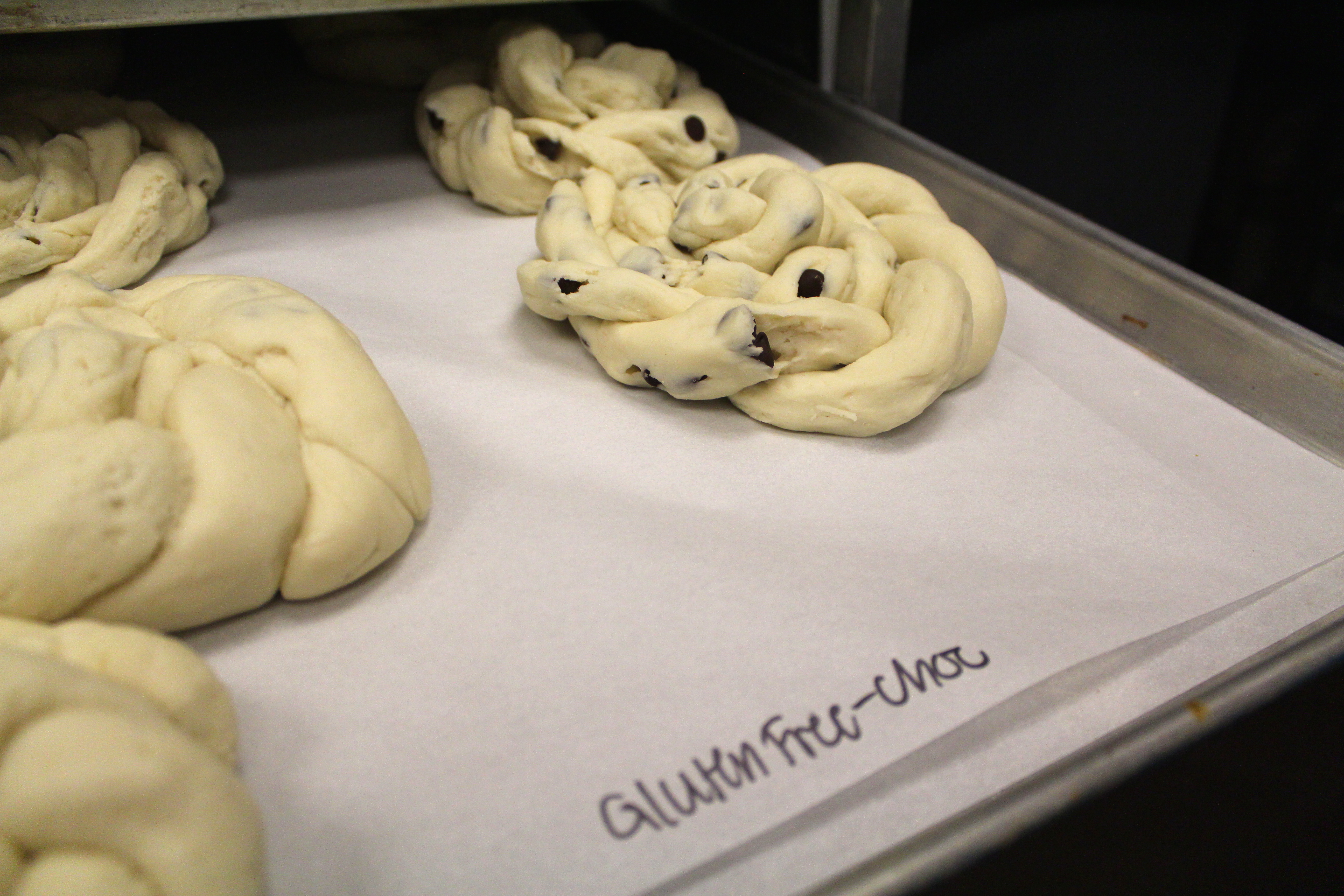 After braiding is complete, the dough is put on racks that are specially labeled before they are all placed into the oven. (Photo by Landon Pederson) 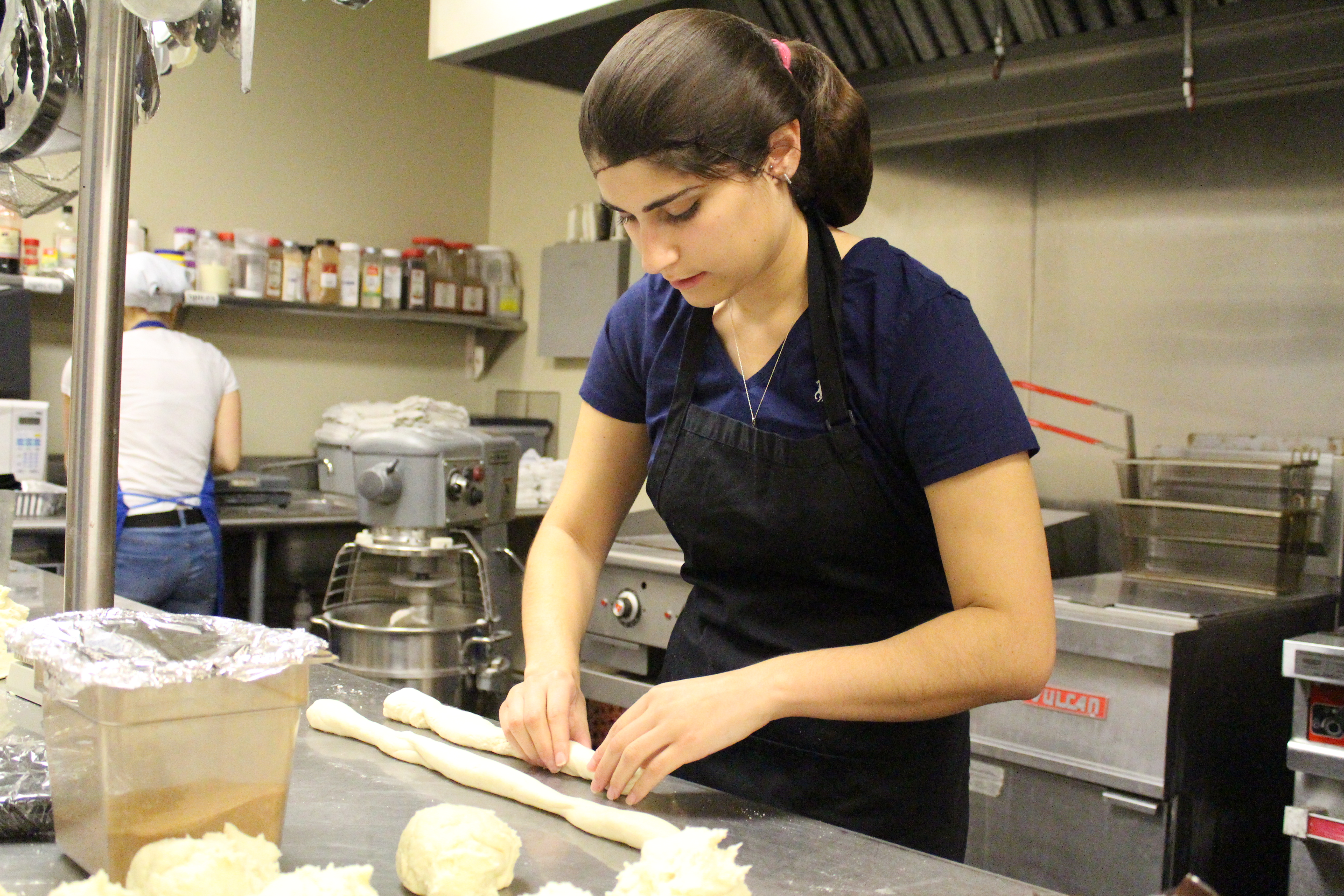 Cohen starts the braiding process. Cohen brings her laptop and plays music, which she says makes it a lot fun. (Photo by Landon Pederson) 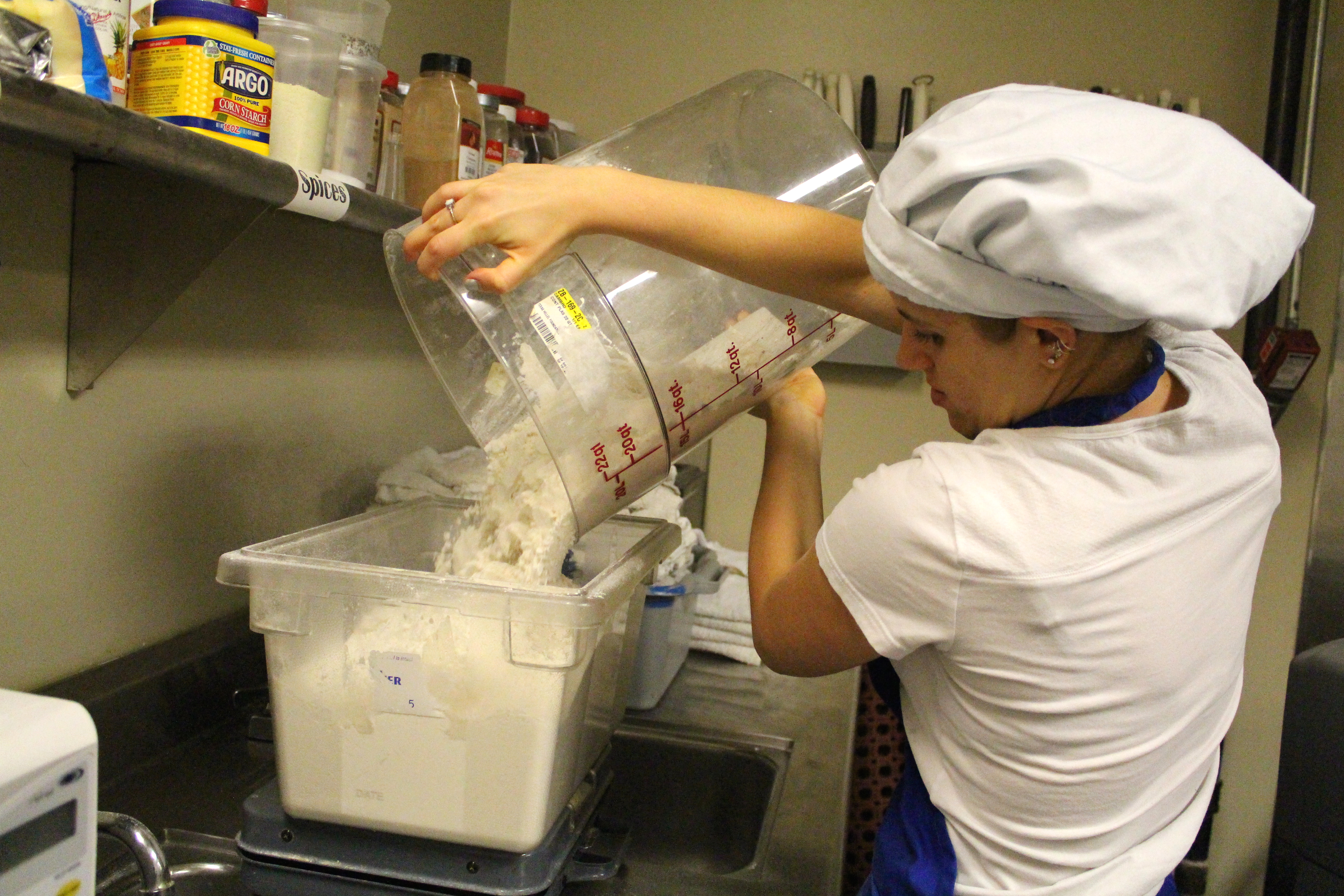 A member of Challah for Hunger dumps flour into a bucket as she gets ready to place it into the food processor. (Photo by Madison Hamilton) 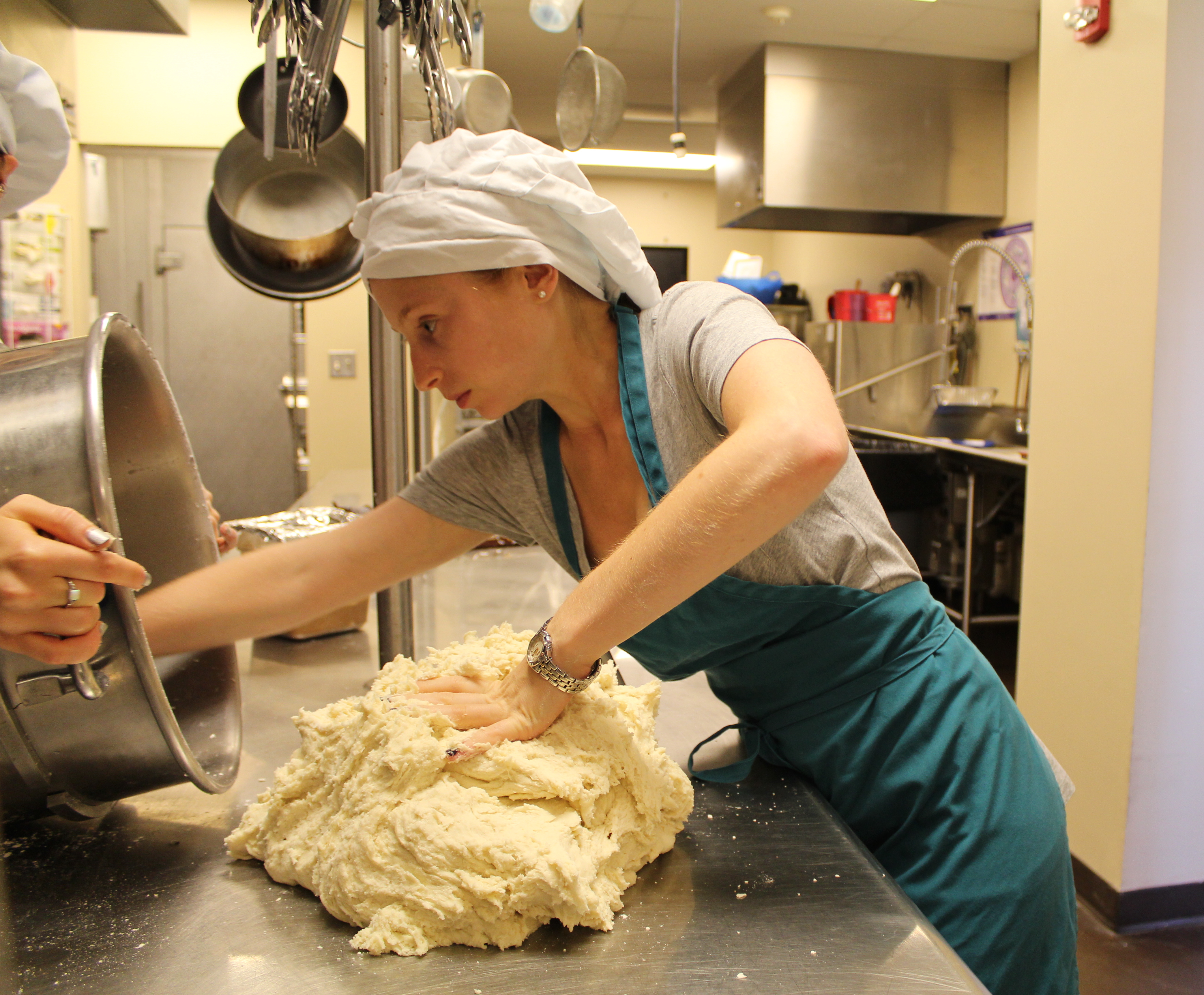 Haspel's favorite part about the baking process is "getting out the dough and punching it." (Photo by Madison Hamilton) 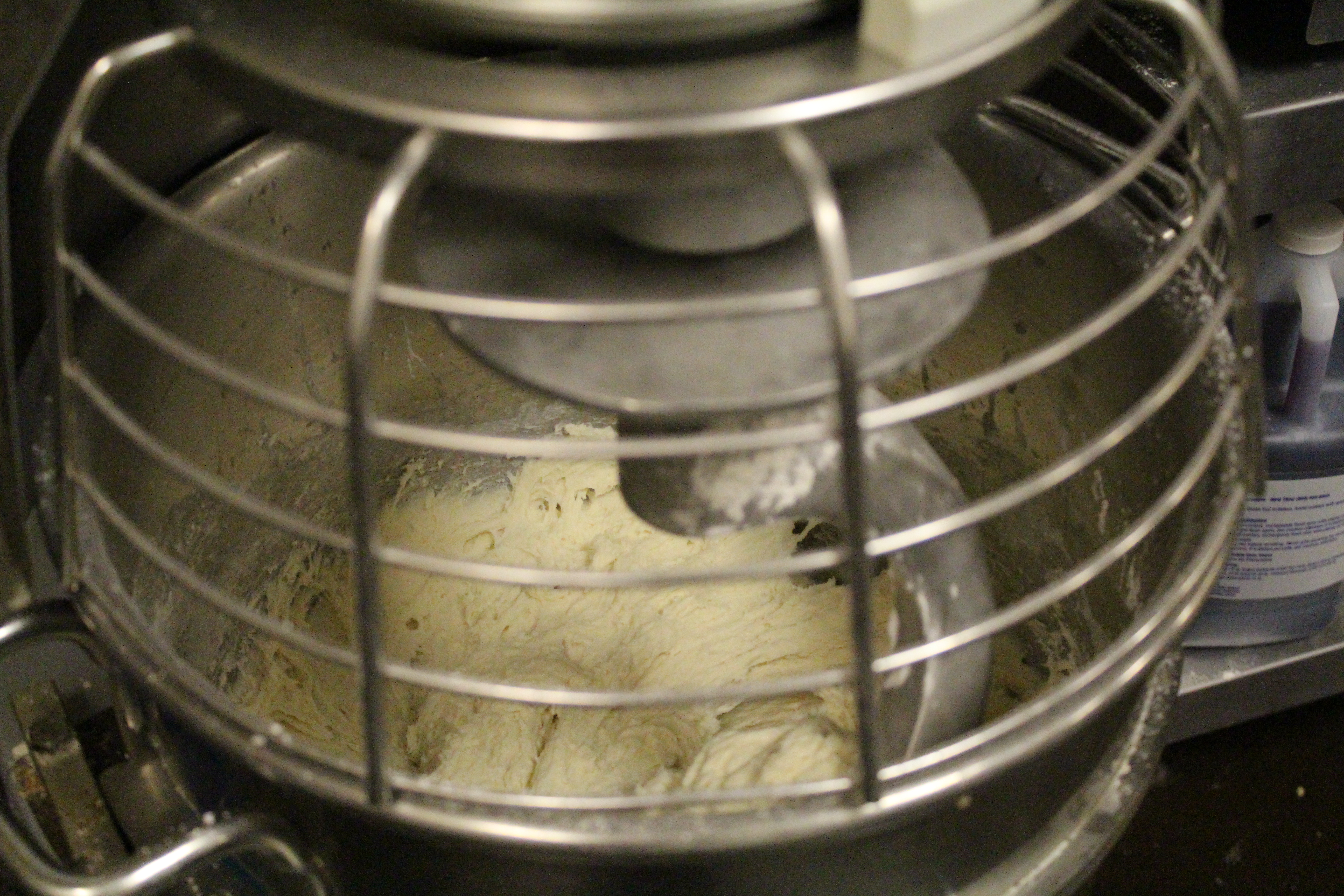 Before the fun of playing with dough begins, it starts in the food processor. (Photo by Landon Pederson) 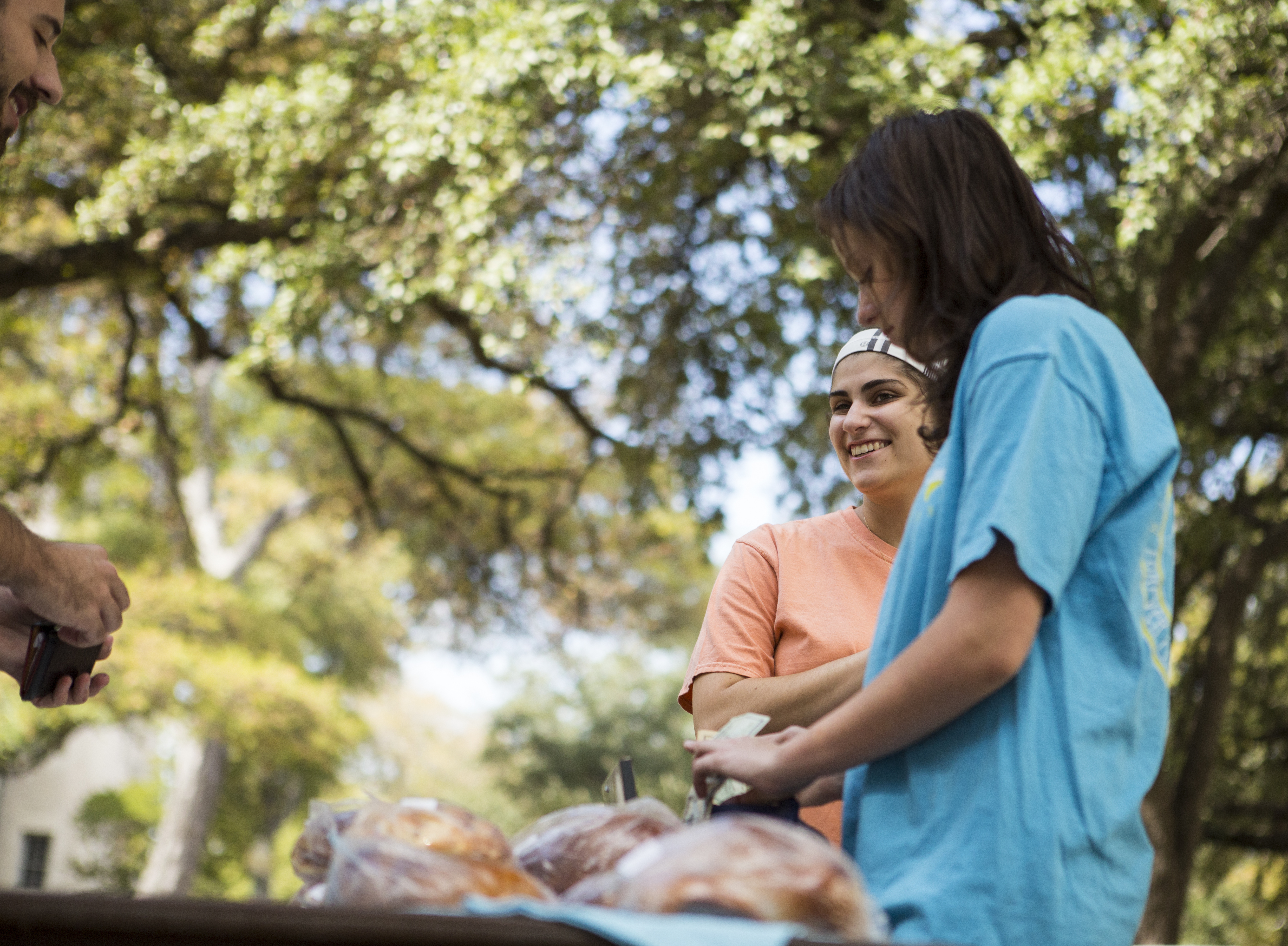 Cohen smiles as she gets ready for another day on the West Mall selling challah bread for a good cause. (Photo by Omar Longoria) 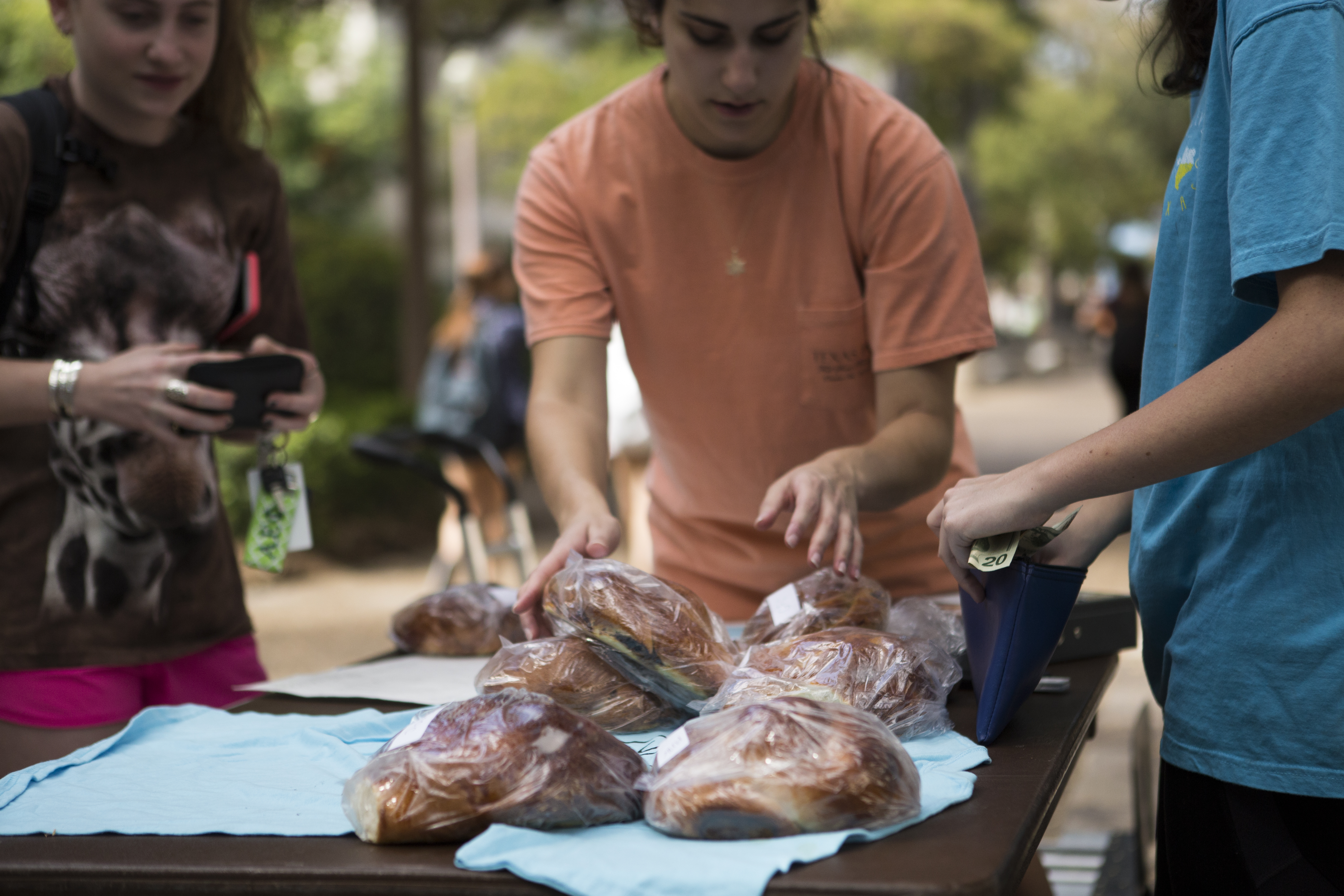 Members of Challah for Hunger say it only takes two hours to sell all of the bread they bake for the week every Wednesday on the West Mall. (Photo by Omar Longoria) 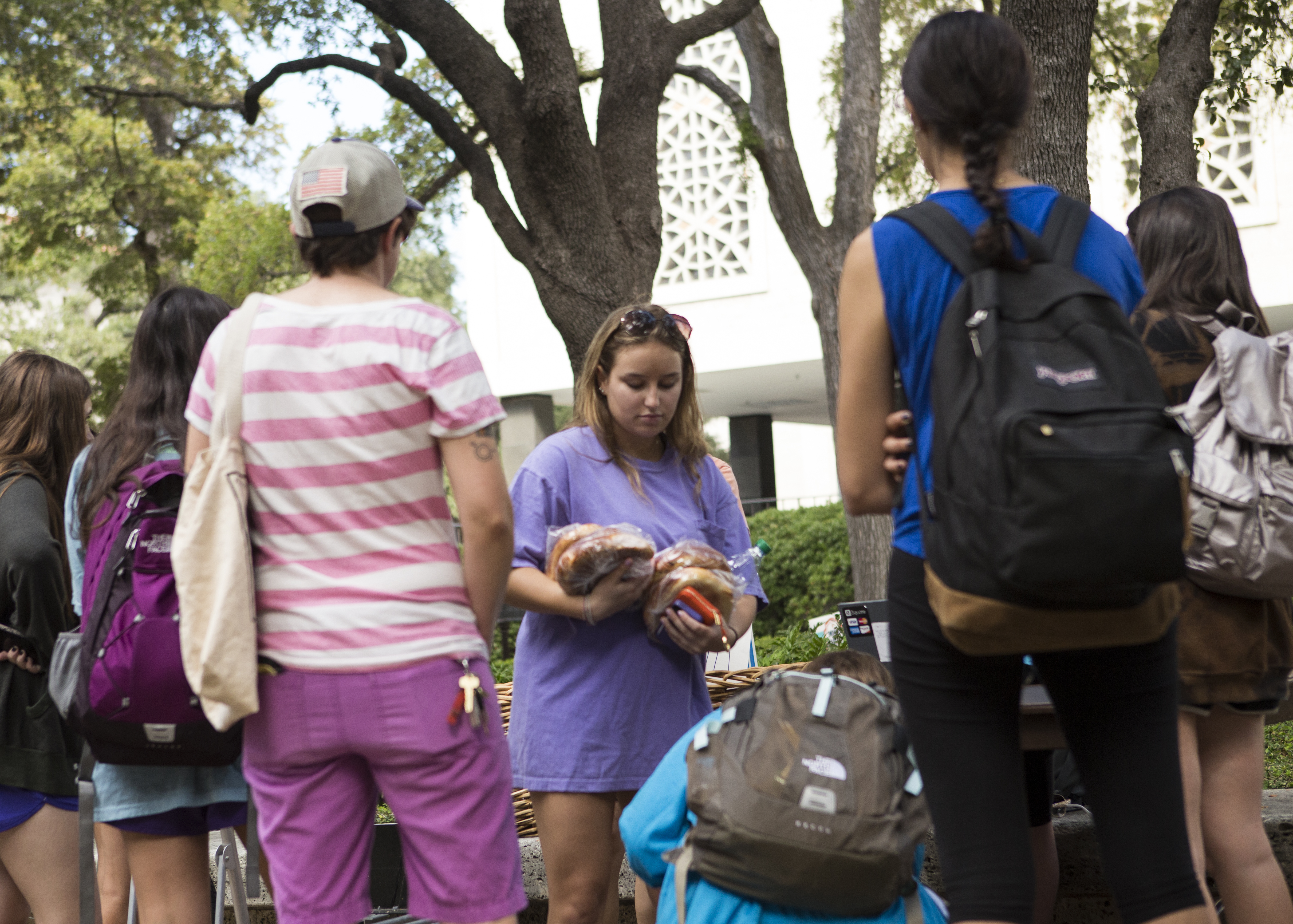 Cohen says that people love the challah and buy "three or four loaves at a time." (Photo by Omar Longoria) 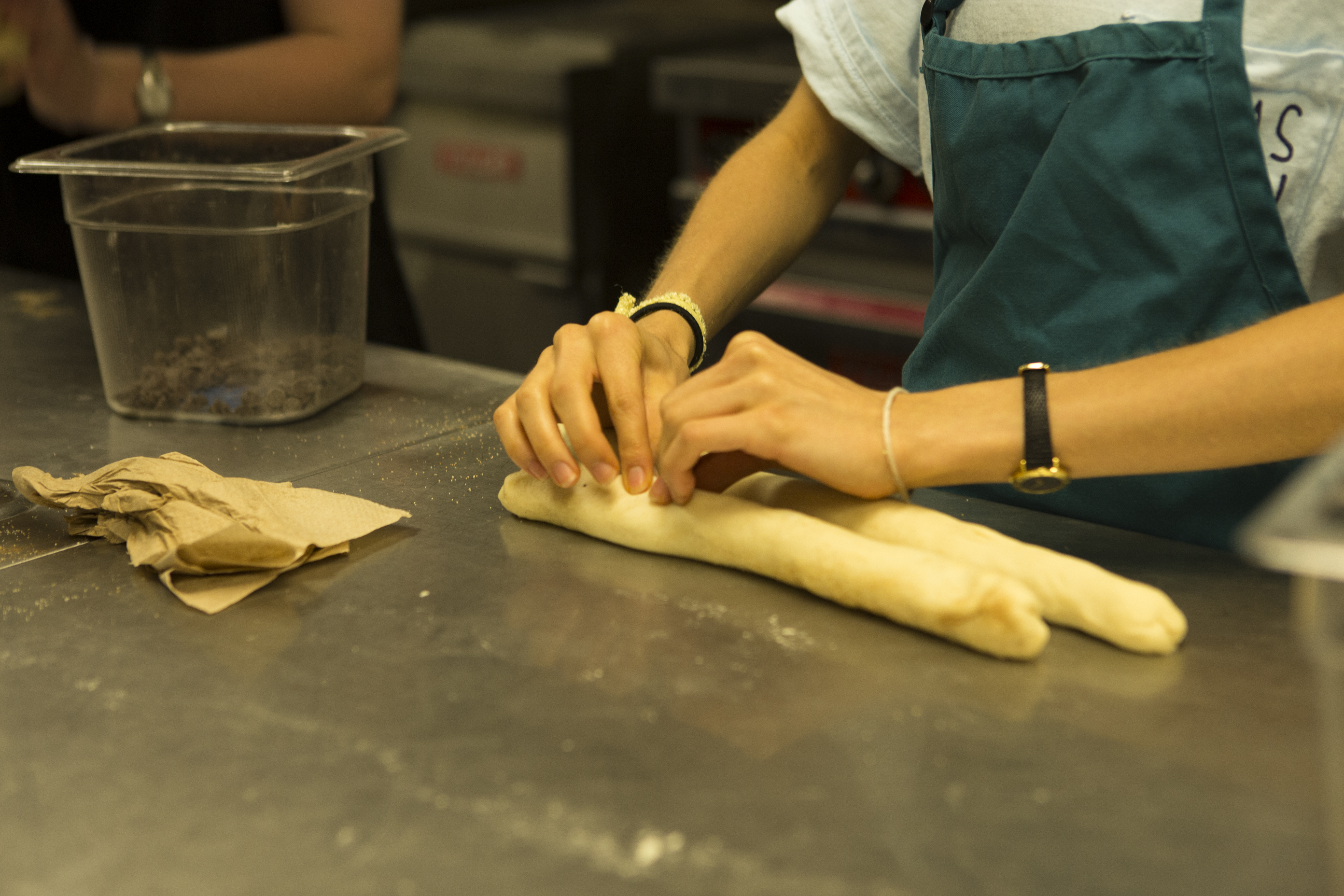 Haspel says "braiding is actually really fun and not as hard as it may appear to be." (Photo by Melinda Billingsley) 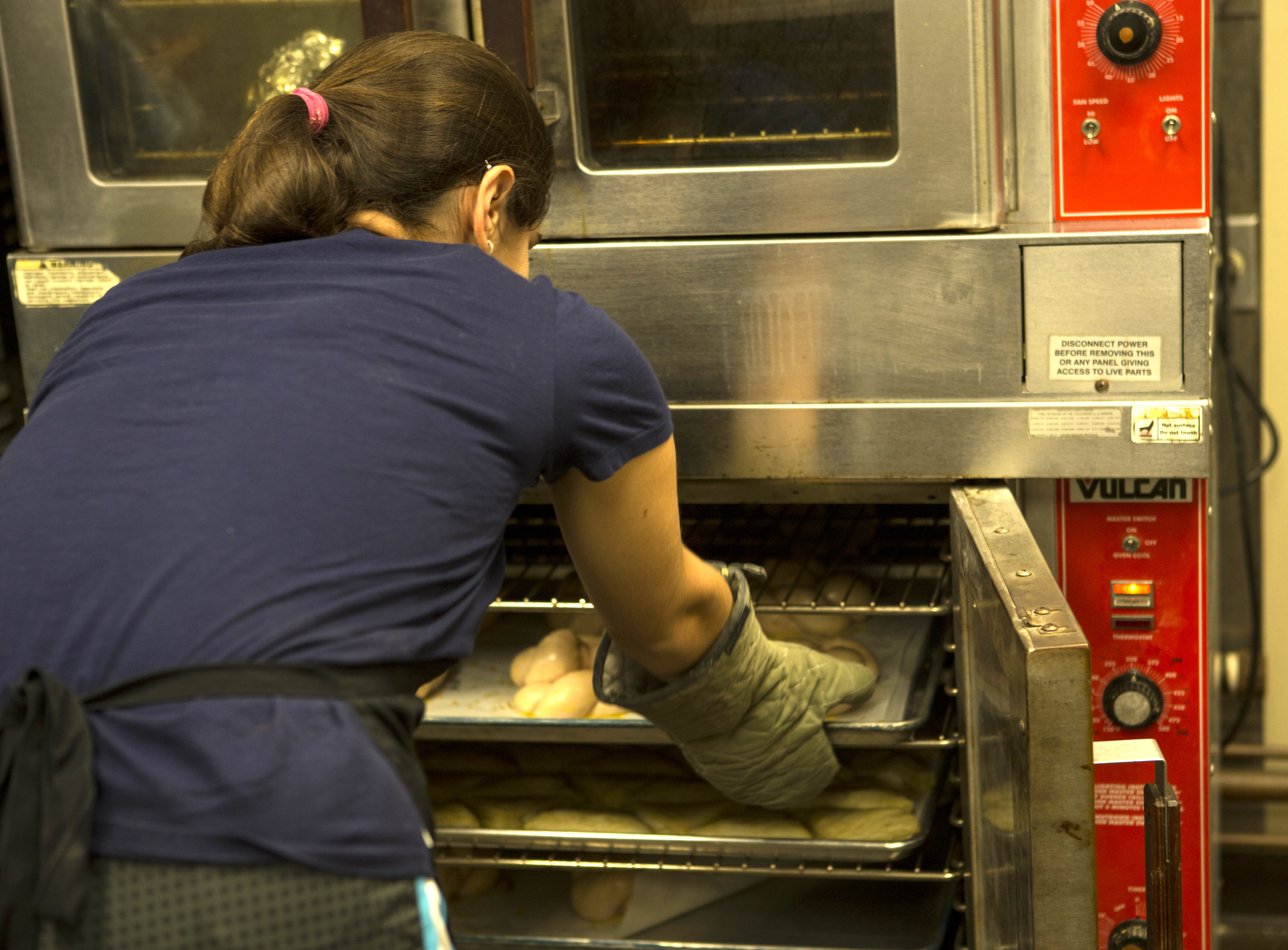 Cohen takes out a batch of challah bread that is now ready to be carted over to the West Mall to sell. (Photo by Omar Longoria) 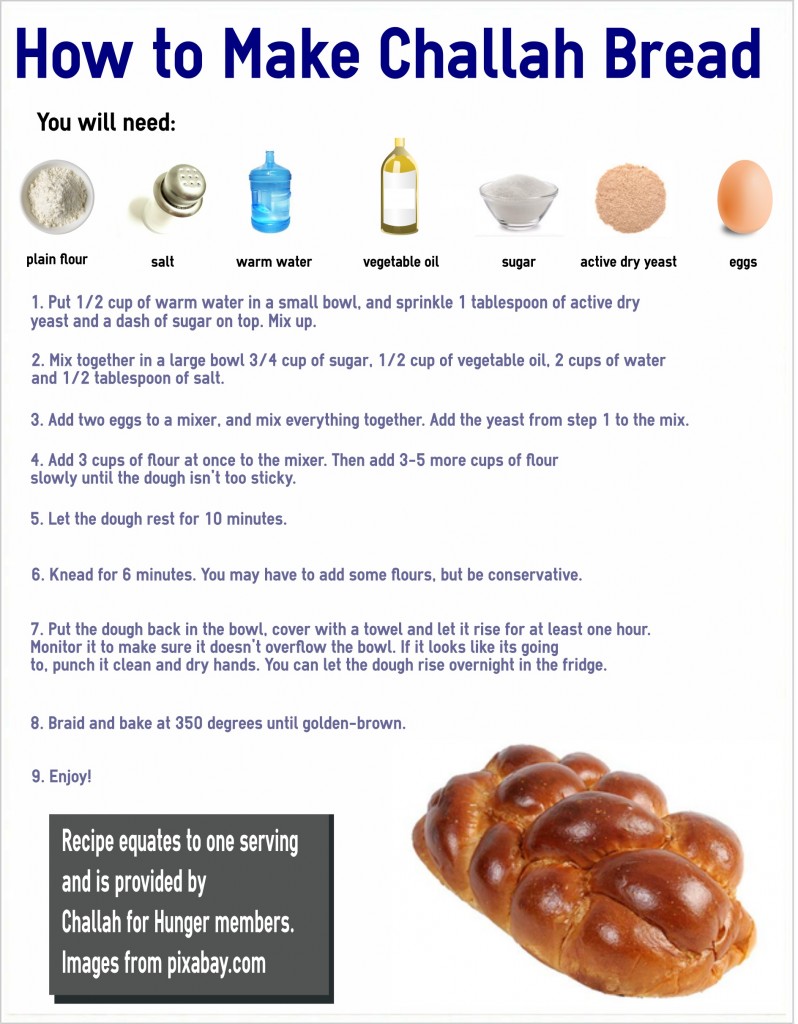 Tags: community, food, Texas
← Saying “I Do” and Graduating Too
Don’t Judge a Book Festival By Its Cover →