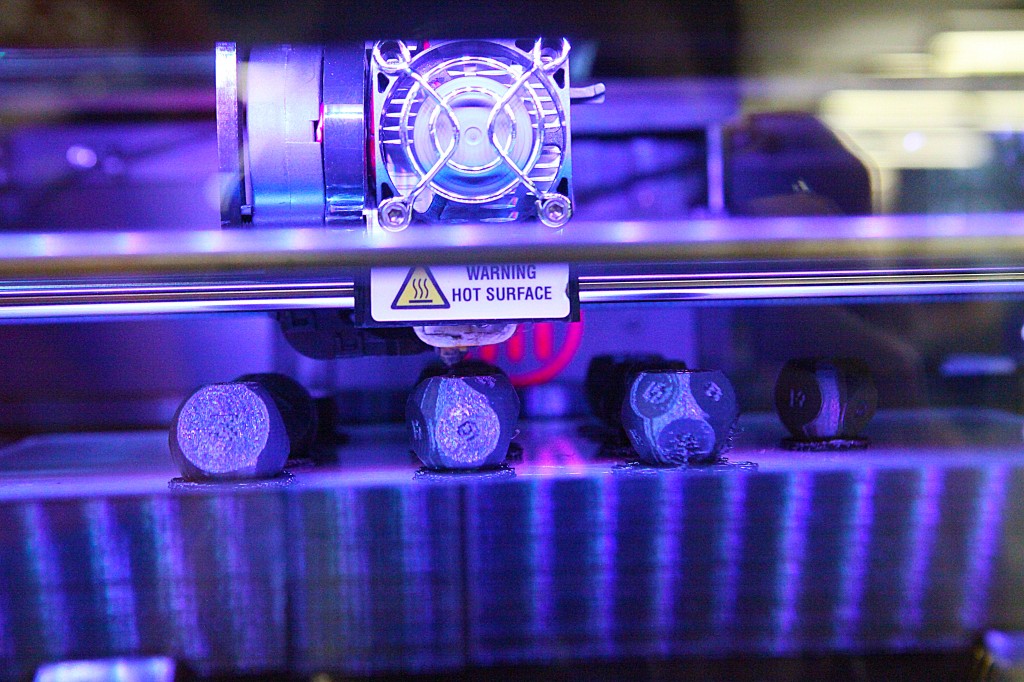 AUSTIN – With all the talk about 3-D printing, a few questions still remain. What is in it for the consumer? How does 3-D printing work? Is it costly?

Since early September, 3-D printing has been available at no cost for all students at the University of Texas at Austin. The printer is located in the “T-Room” inside the Mechanical Engineering Building on campus.

Third-year aerospace engineer Kenzie Snell heard about the 3-D printer in the Longhorn Rocketry Association where students had to use it for their rockets. Students in other engineering courses are also using the printer for class projects.

“For my engineering design graphics course I had to recreate a water valve pipe that we took the dimensions of, created 3-D images of them, and then printed them for a final project,” Snell said. 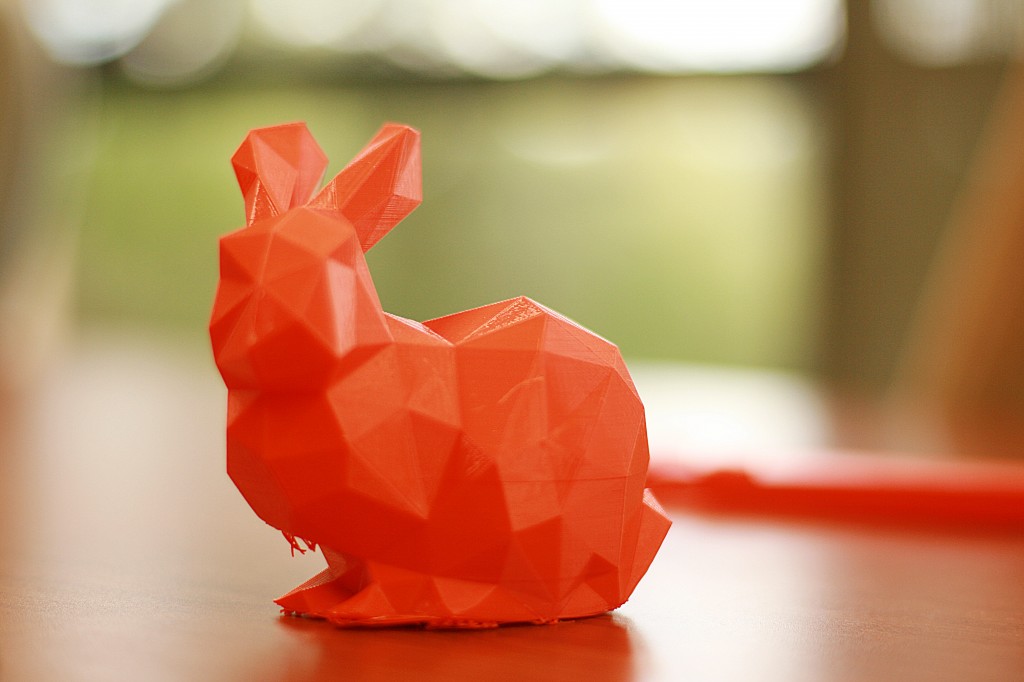 A software development group at the university’s school of engineering created an online portal for students to upload their own designs to the 3-D printer. And here is how the process of 3-D printing works. Each design is reviewed by an engineering student for approval. Students are notified via text message once their design has been approved and is in the process of printing. A second and final text message is sent when the design is finished printing and can be picked up.

“No one has to walk up to the machine and load files which is what typically happens with 3-D printers, and involves students kind of hanging around until it becomes available’’ said Dr. Carolyn Seepersad, associate professor of mechanical engineering at U.T.’s Cockrell School of Engineering.

According to Seepersad, students are customizing parts for themselves, including cuff links, initialed designs, and longhorns for the graduating class. Lately, Seepersad has noticed a significant amount of Pokemon figurines being printed.

“If they can draw it up on their computer, then they can print it out and have it pretty quickly, which is easier than going to the machine shop and trying to make it out of wood, steel, or metal,” said Seepersad. 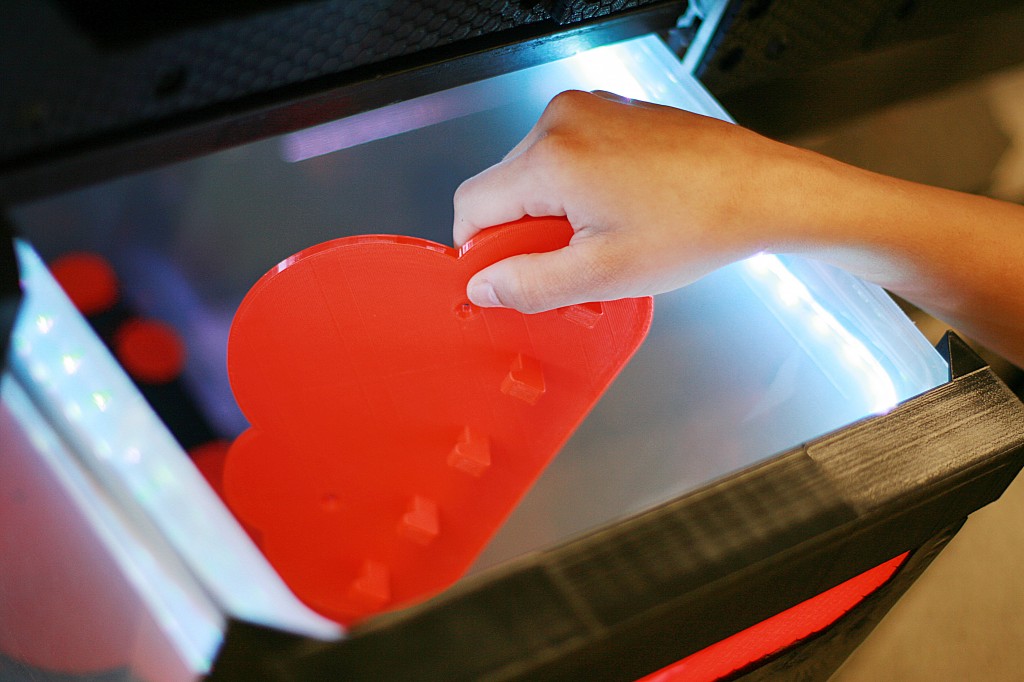 Students can pick up their creations at the Innovation Station once they are completed
Photo Credit: Silvana Di Ravenna

3-D printing is also being used to make complex shapes in low volume that are not made with other manufacturing techniques used for high volume. According to Seepersad, 3-D printing “is not going to replace other forms of manufacturing,” but it’s going to “supplement manufacturing in very viable ways.”

“Essentially, what you would make in five pieces and glue them together in an assembly shop, a 3-D printer can do it in a single step,” said Dr. Vikram Devarajan, University of Texas alumnus and 3-D printing expert.

According to Devarajan, 3-D printing was invented about 20 to 25 years ago, and because all of the original patents have already expired, the cost of printing has since decreased. This has made 3-D printing much more affordable for the consumer.

The 3-D printer available for the students uses materials that are relatively inexpensive. The mechanical engineering department has offered to help pay for materials, but donations are also being accepted.

“We can print parts almost continuously and only have a couple thousand dollars of material costs at the end of the year,” said Seepersad. “The labor of keeping the machine updated and maintained is probably the biggest expense.”

According to Devarajan, U.T. owns several printers that employ two main types of additive manufacturing processes.The 3-D printer available for all students is based on a process called FDM [Fused Deposition Modeling] and is more reasonable in material costs. The other process, SLS [Selective Laser Sintering], is more expensive but can print more complex designs and is widely used in the medical and the aerospace industry.

“We couldn’t afford to open up [the SLS] process to students because of the material costs,” said Seepersad. “The parts printed from the 3-D printer downstairs rarely print anything that has more than a dollar’s worth of material.”

3-D printers range in price depending on the complexity of the printer itself. Printers using the SLS modeling process can print complex designs such as organs and complex flow field geometries. At U.T., a human heart modeled from a CT scan was printed, according to Devarajan.

“You can go buy an FDM 3-D printer for $1,000,” said Devarajan. “The SLS printers I have operated at U.T. are about half a million dollars each.” 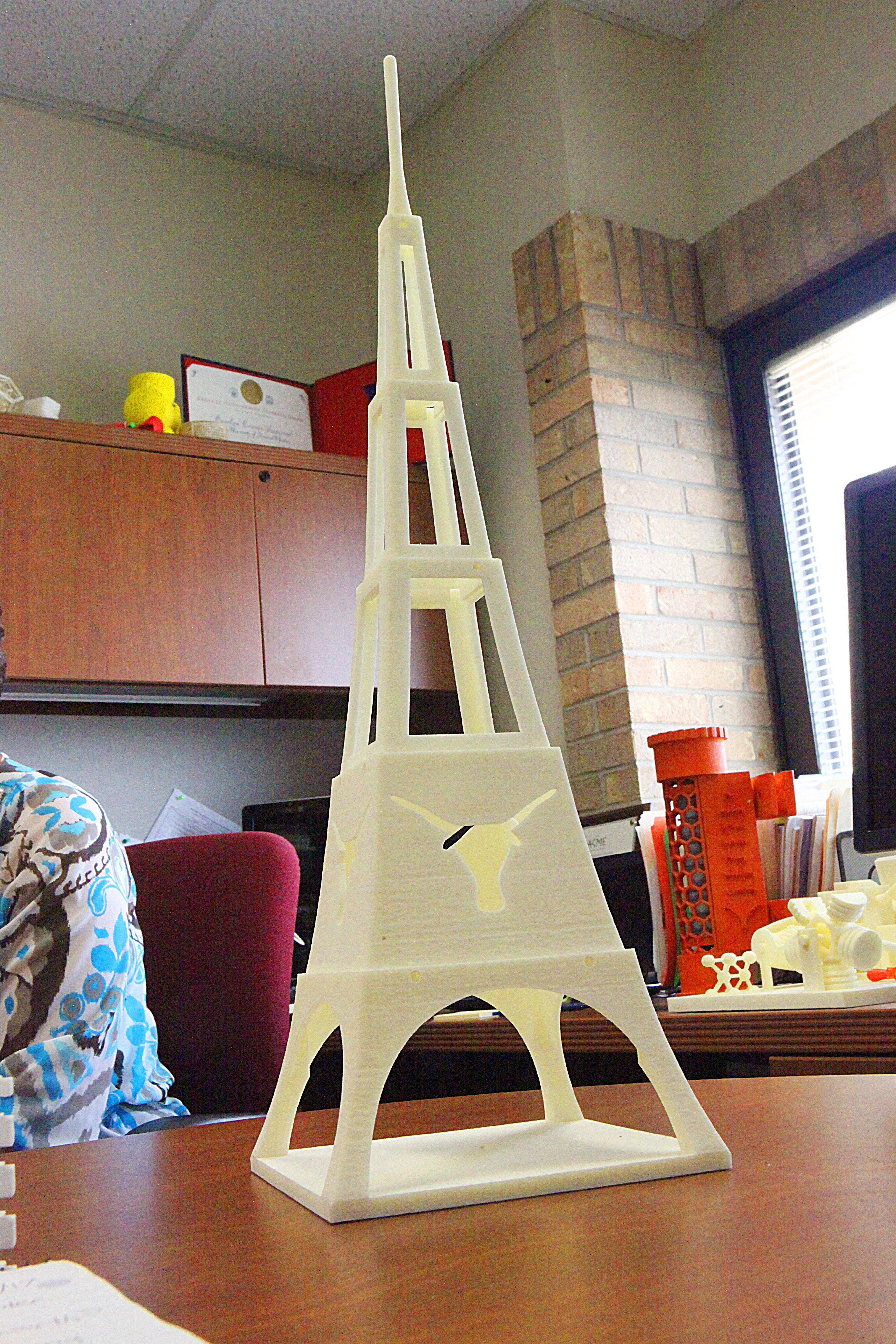 Reaching a different height
Dr. Carolyn Seepersad shows there's no limits to 3-D printing when you can design The Eiffel Tower with a Texan twist. Photo Credit: Breanna Luna 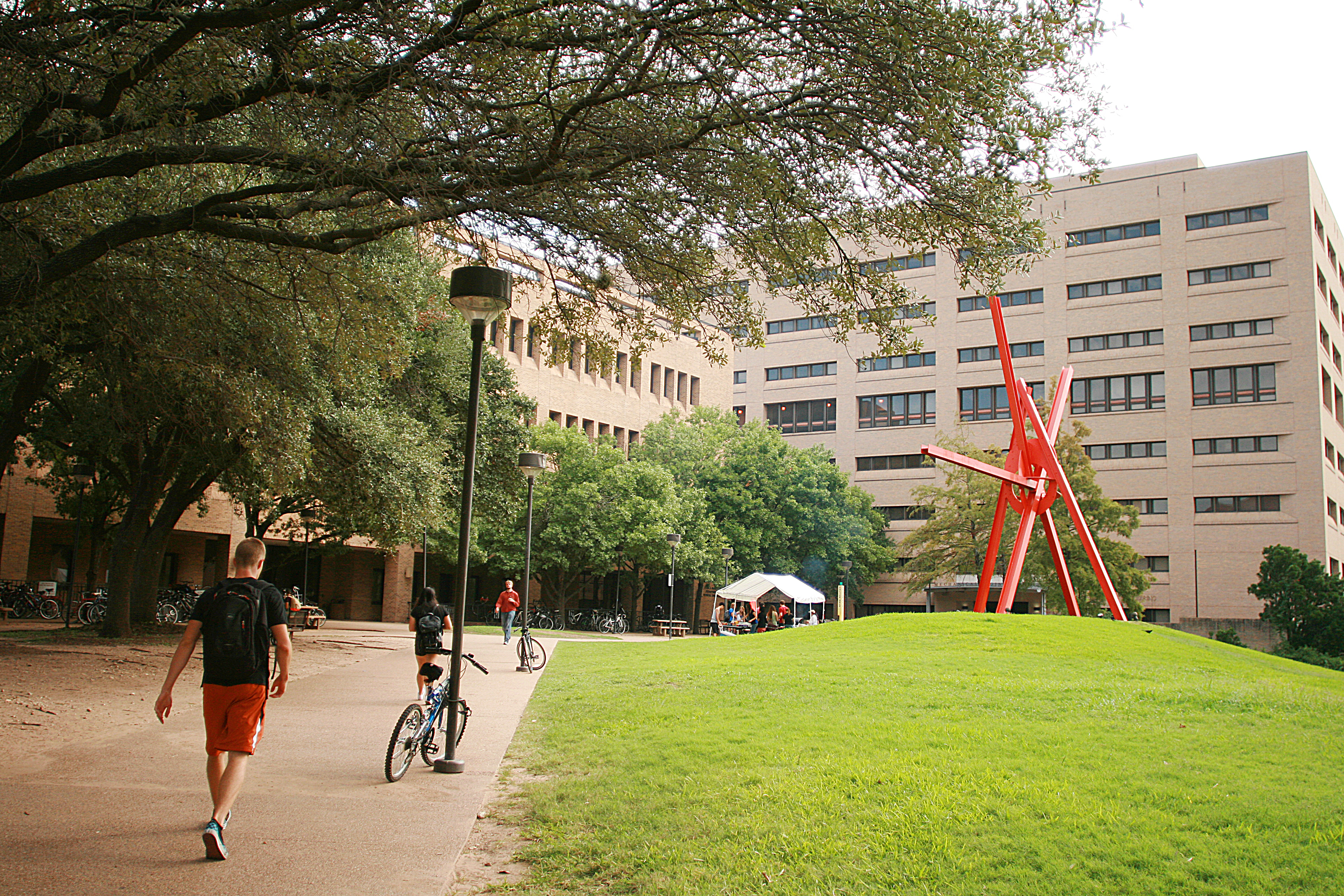 Cockrell School of Engineering
The Cockrell School recently launched a cutting-edge 3-D printing vending machine available for free to all students at The University of Texas at Austin. It's the third machine of its type in the U.S. Photo Credit: Silvana Di Ravenna 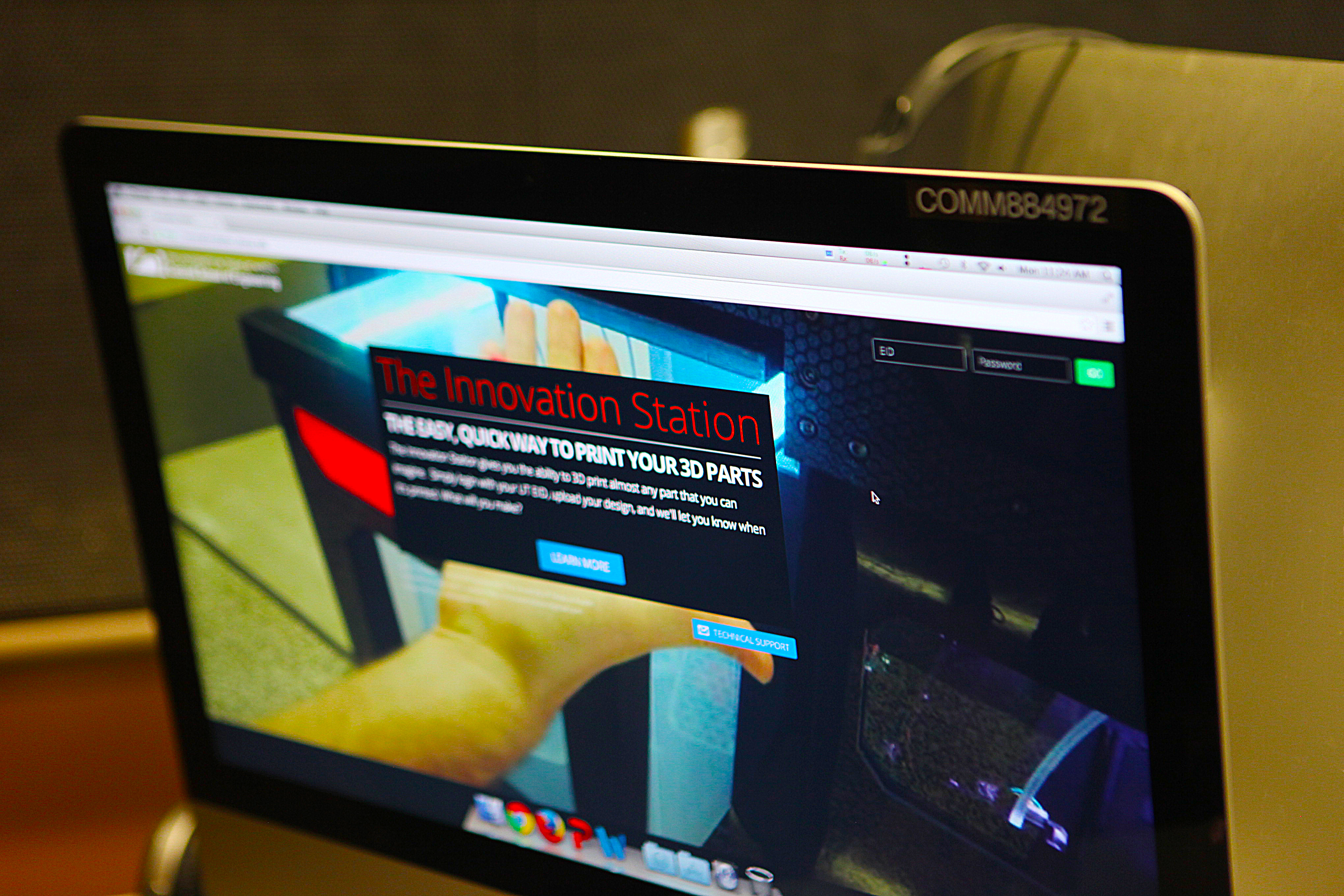 Where it begins
Students can create and customize their own 3-D parts through the innovation station website https://innovationstation.utexas.edu/ Photo Credit: Breanna Luna 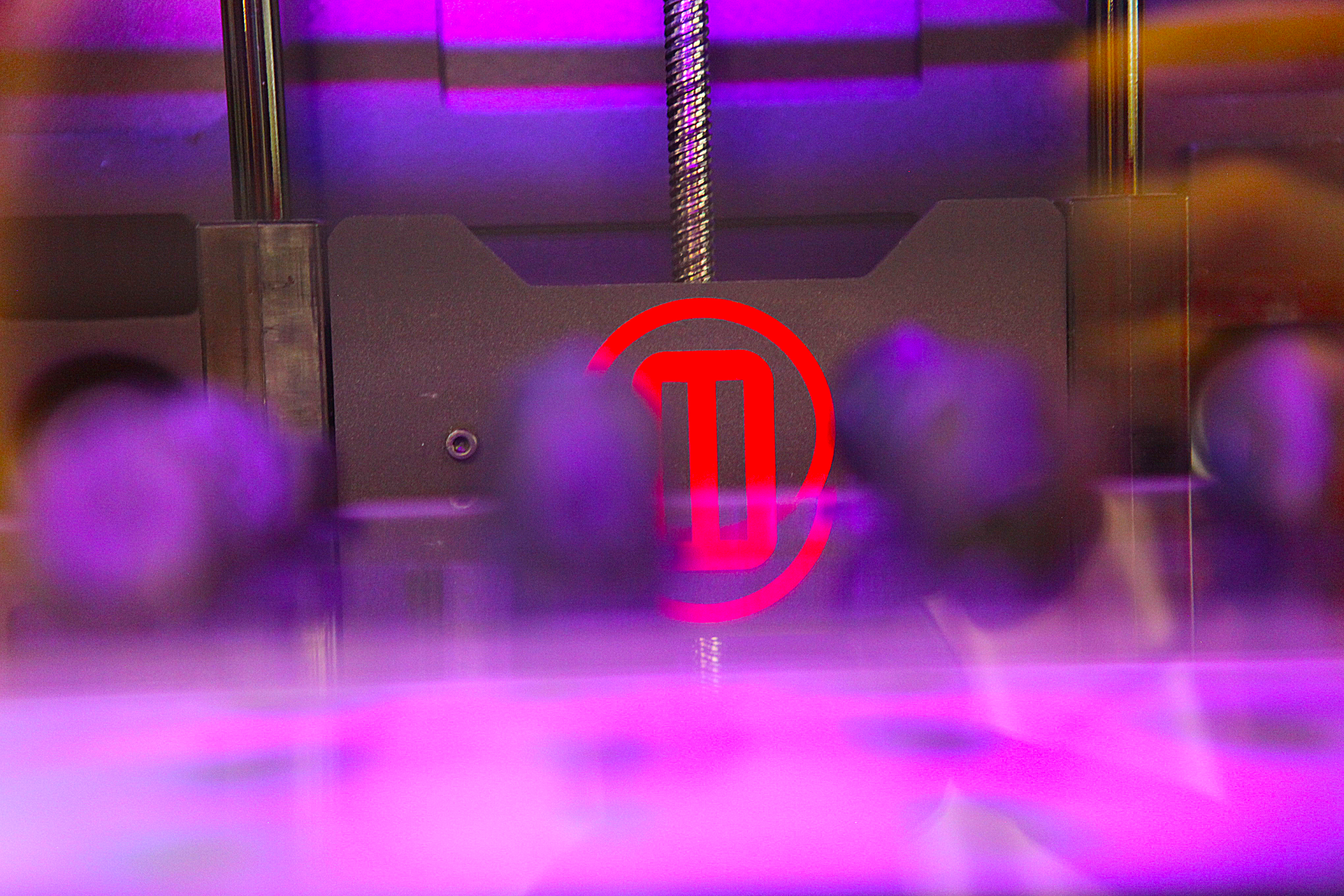 The reality of purple dreams
Two Makerbot printers will make usage and accessibility some of the best functions for printing. Simply send your file to the Innovation Station and students will receive a text when their creation is ready. Photo Credit: Breanna Luna 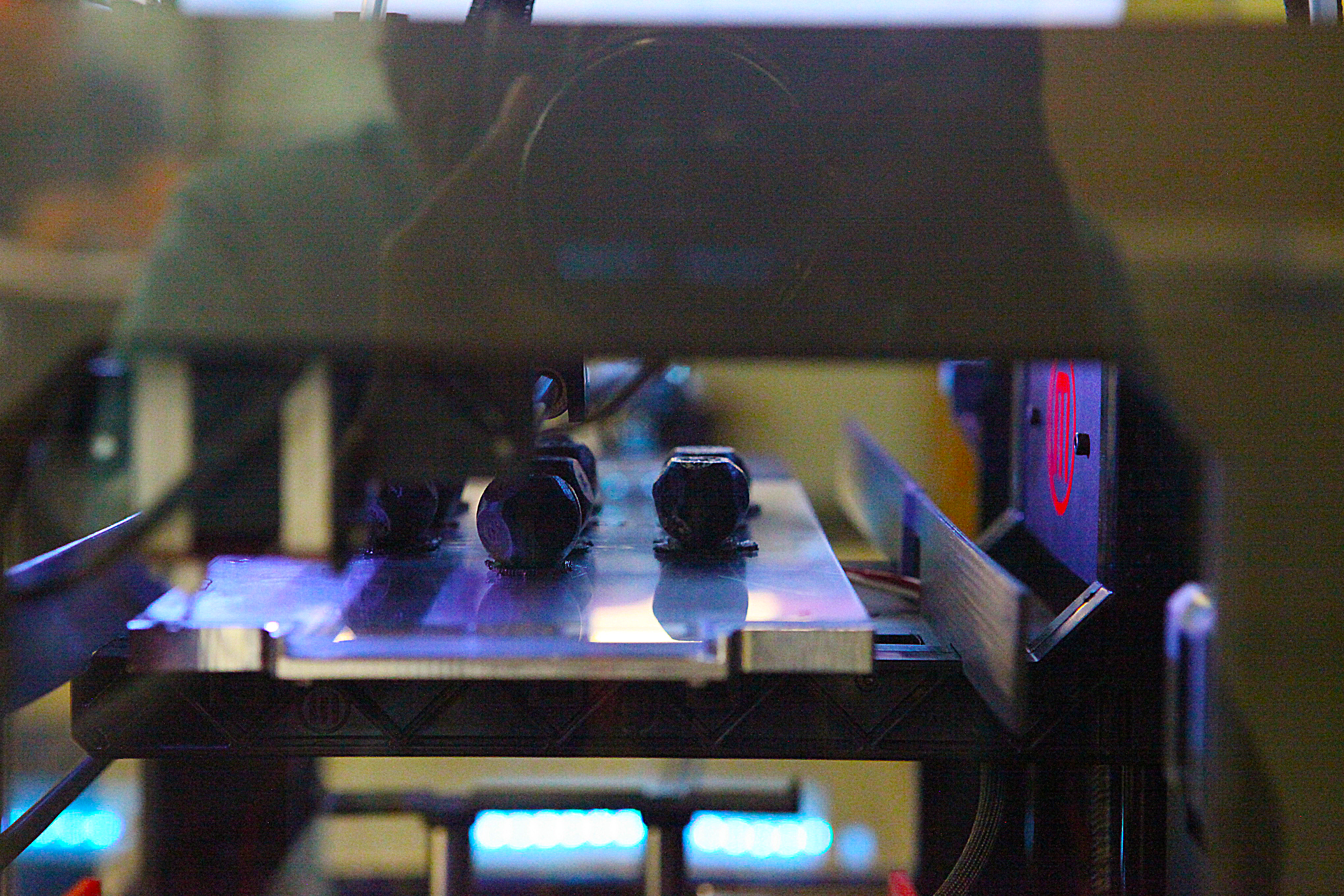 Up Close and Personal
Creators are also able to view their image in 3D when they download MakerWare to their laptop. Photo Credit: Breanna Luna 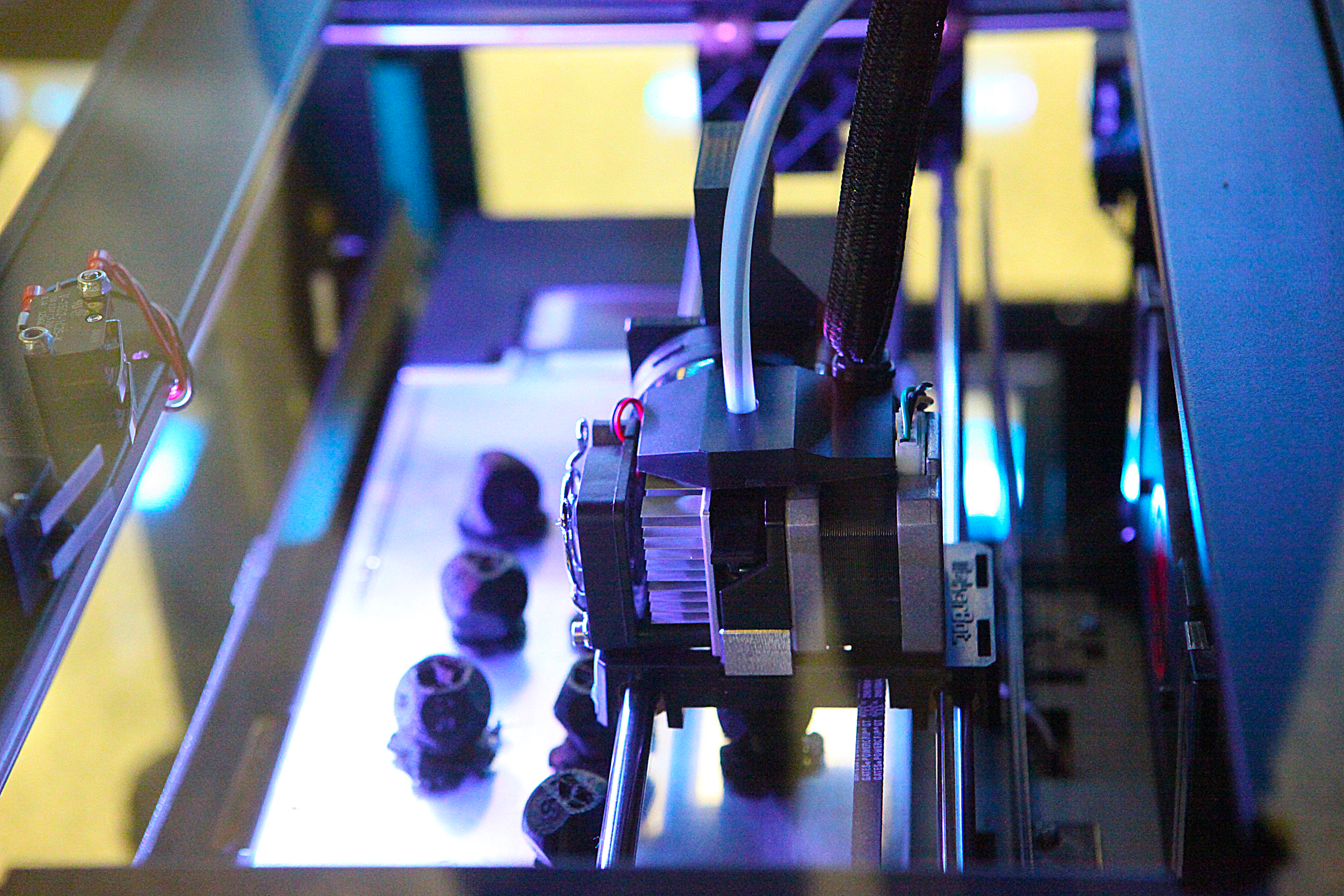 Bringing Projects to Life
With heated plastic filament thinly layered one after the other, the MakerBot printer can produce dice in a span of two hours. Photo Credit: Breanna Luna 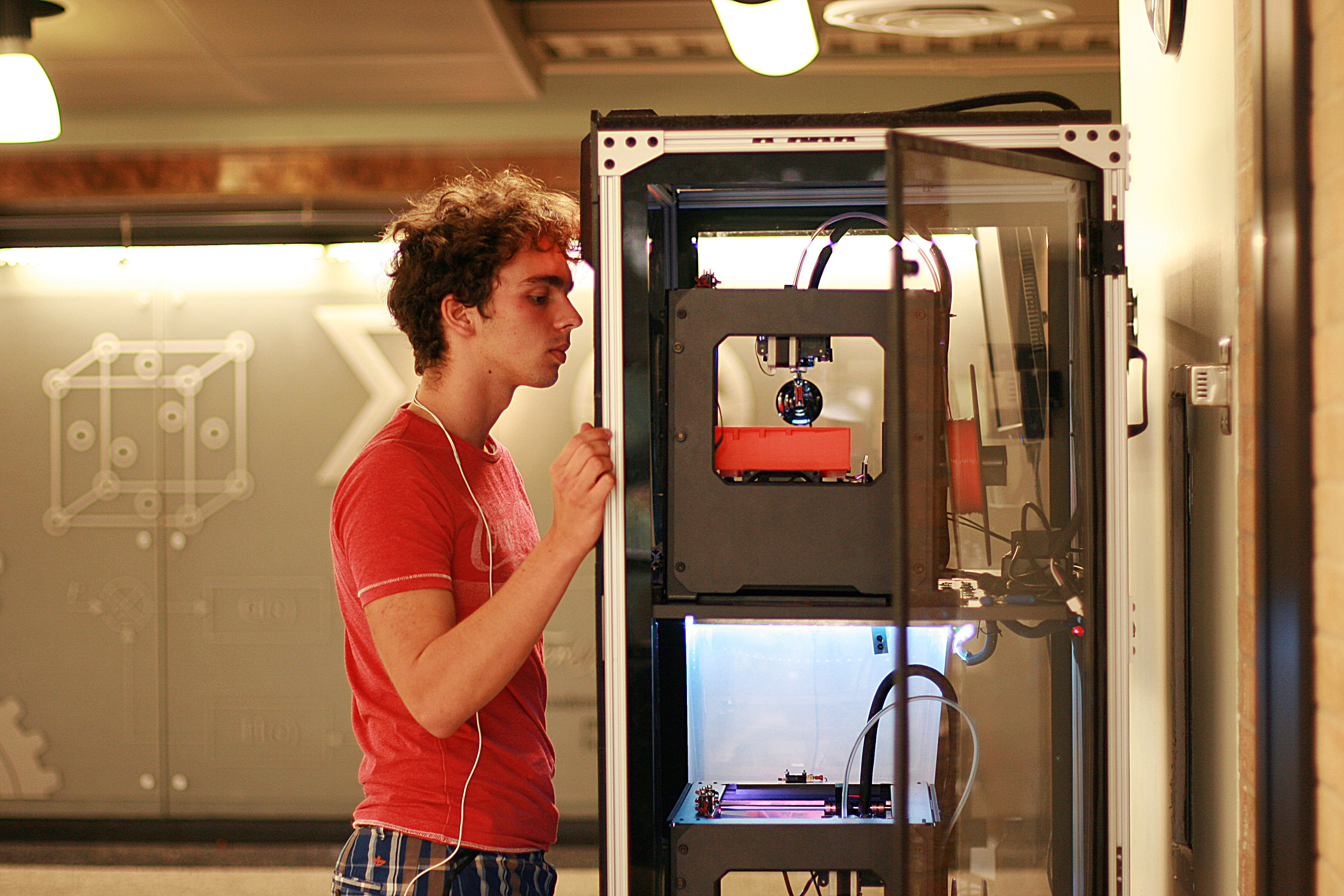 Laying down the final touches
Lukasz Pietvasik studies how intricate and precise the printer digitizes his design into a tangible object. Photo Credit: Silvana Di Ravenna 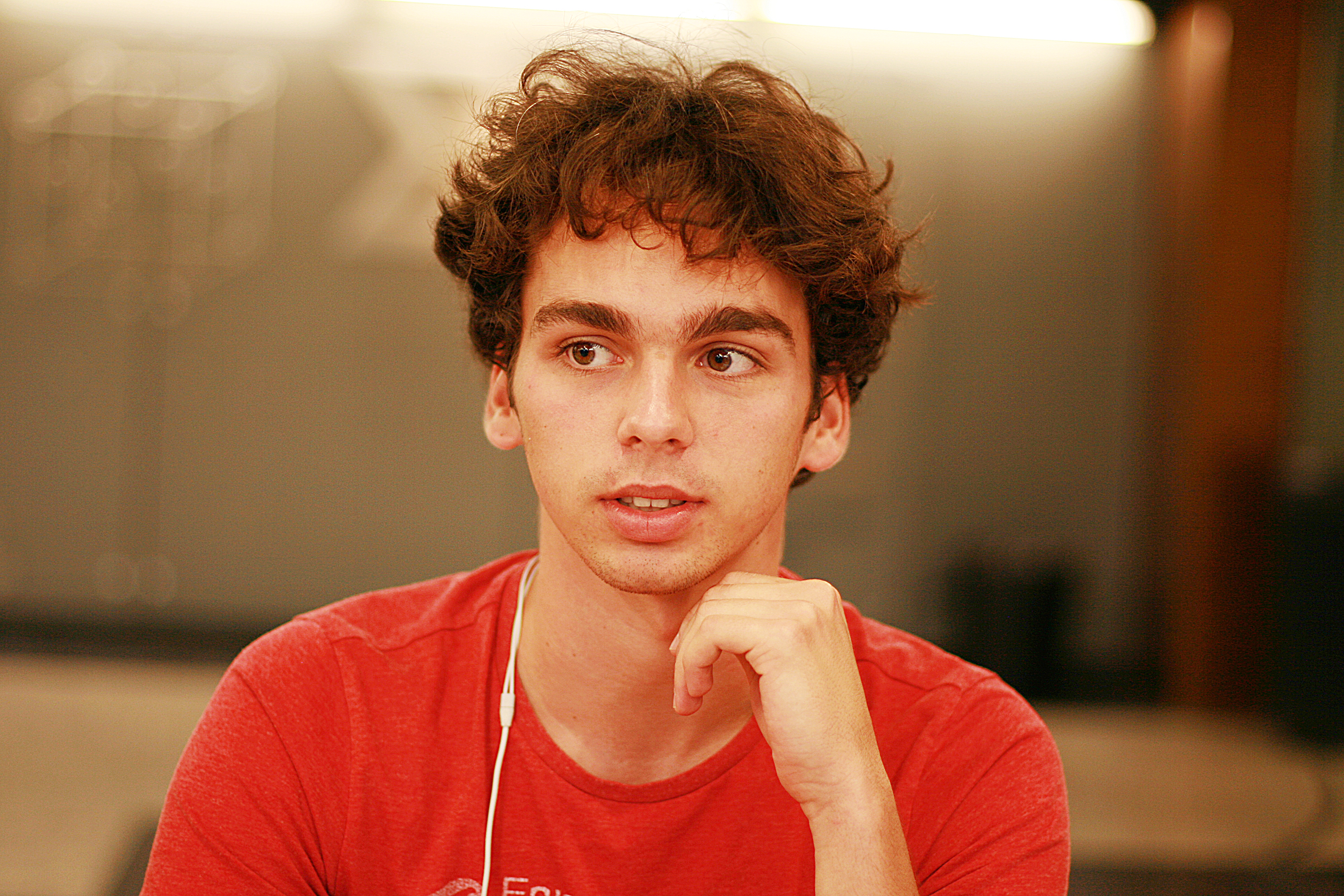 Accessibility is Key
Pietvasik discusses how important it is for engineers to have access to things like 3D printing in order to learn as much as possible in the engineering field. Photo Credit: Silvana Di Ravenna 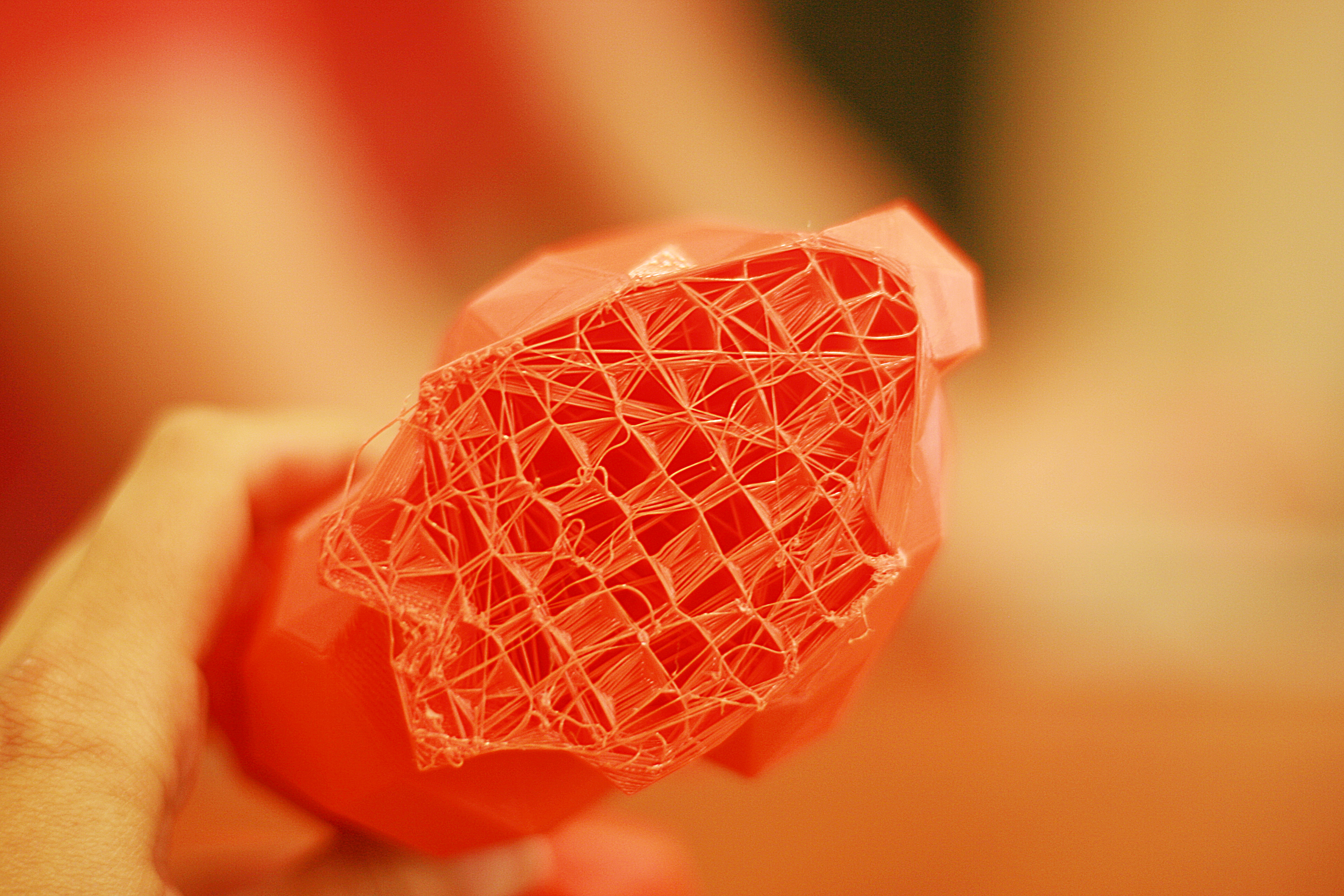 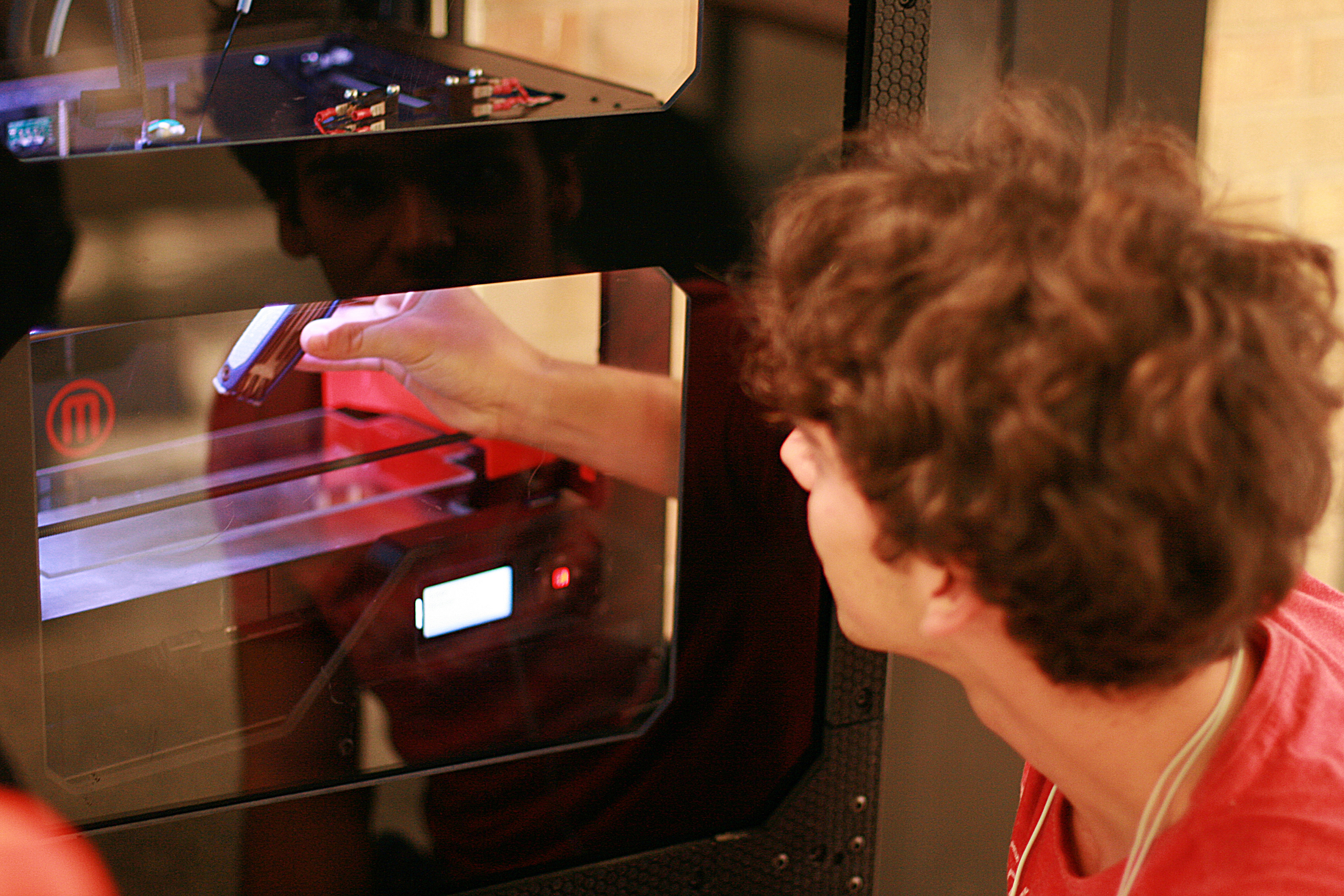 It's all about the matrix
3D printing is being used to make complex shapes in low volume. Photo Credit: Silvana Di Ravenna

Uber and Lyft Drive Towards Legalization 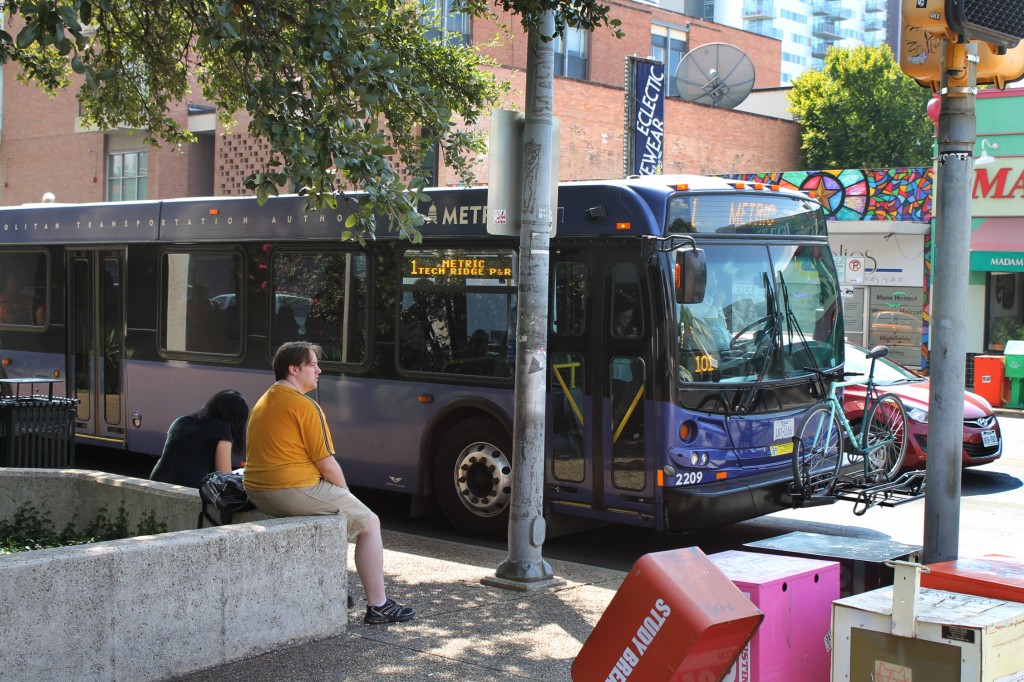 Locals in Austin look for alternative means of transport that will allow them to avoid the city’s traffic congestion.

Traffic is a hot issue in the city of Austin again, but this time it’s the services being provided by those behind the wheel that is cause for debate.

Growing discontent with transportation options in Austin has opened the door for the arrival of a pair of relatively new companies, Lyft and Uber.  These companies are defined as transportation network companies, though their services are commonly referred to as “rideshares.”  They allow customers to, at a touch of their phones, request vehicular transport from one spot to another.

But in spite of the convenience they provide, not everyone in Austin approves.

The pricing models and services utilized by Lyft and Uber have put the local taxi cab network on edge, as the new source of competition is disruptive to their existing economic model.

Citizens have voiced concerns regarding the safety of these new services and potential liabilities for the city.

Austin city Council Member Chris Riley has heard these concerns and others like them.  But in actively addressing these new transportation options, he doesn’t want to do away with them.

“There’s a lot of interest right now in services provided by companies like Uber and Lyft,” Riley said.  “We need to establish a framework that would allow those services to be provided legally and safely.”

The question of legality is an important one. Since arriving in Austin earlier in the year, both Uber and Lyft have technically operated illegally. Only taxis are authorized by the city to offer hired transportation.  The two San Francisco-based companies have continued their operations regardless, resulting in some drivers being issued citations or even having their vehicles impounded by the city.

Riley’s desire to see the services legalized in Austin is multifaceted.  He would rather see local law enforcement officials investing their time and effort in pursuing more serious situations than the citation of an Uber or Lyft driver.  He also wants to help provide for those who are simply enjoying a late night out on the town.

“We have a lot of people coming downtown and wanting a safe ride home, especially if they’ve had a few drinks,” Riley said.

A proposal has been brought before the Austin City Council that would provide a temporary regulatory framework for transportation network companies.  The regulations passed a first vote, but will be further scrutinized before being made law. 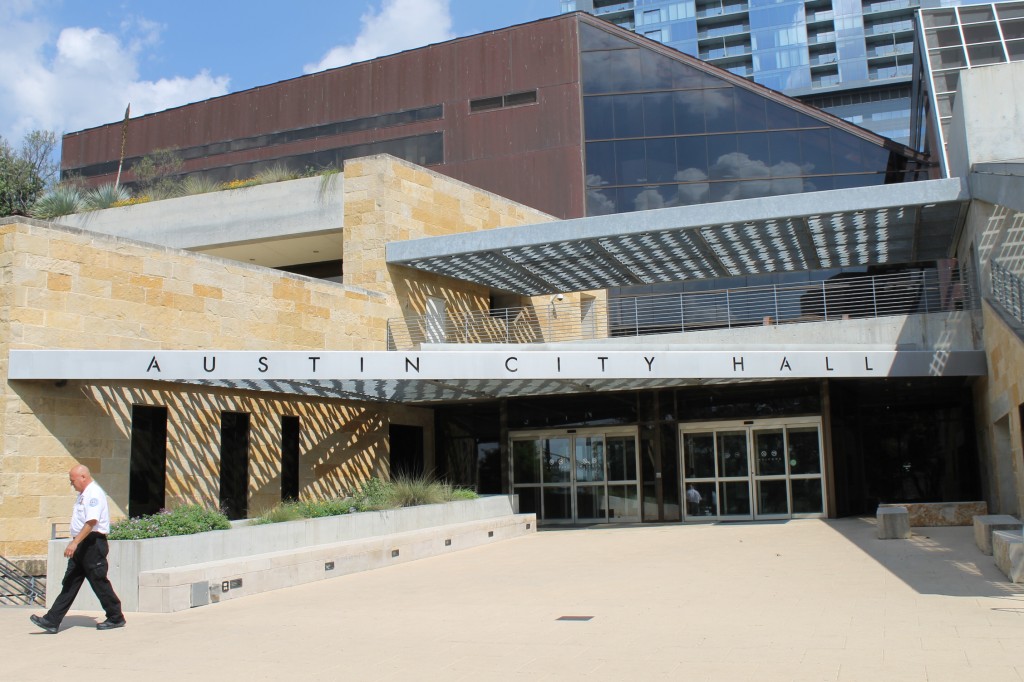 The proposition led to lengthy testimony from those both for and against legalizing the companies.  Riley understands the thoroughness of the consideration, but doesn’t want to see the companies regulated with unnecessary rigidity.

“I don’t want the regulations to be so onerous that they’re going to continue operating outside of our legal framework,” Riley said.

The councilman is also seeking to push the regulations through with expedience in the name of safety.

“There is a legitimate concern that someone in Austin might encounter some transportation service and get into a dangerous situation,” Riley said.

Riley posits at least some degree of regulation would better assure customers of a safe experience.

Uber driver Crystal Sone understands the safety issue and offered assurance that it’s not a problem.

“I really wanted to make sure that my safety was important (to Uber), and it’s really been great,” Sone said.

But when Riley says that companies like Uber and Lyft “aren’t going to be the only players in the field for long,” he may not realize just how right he is. 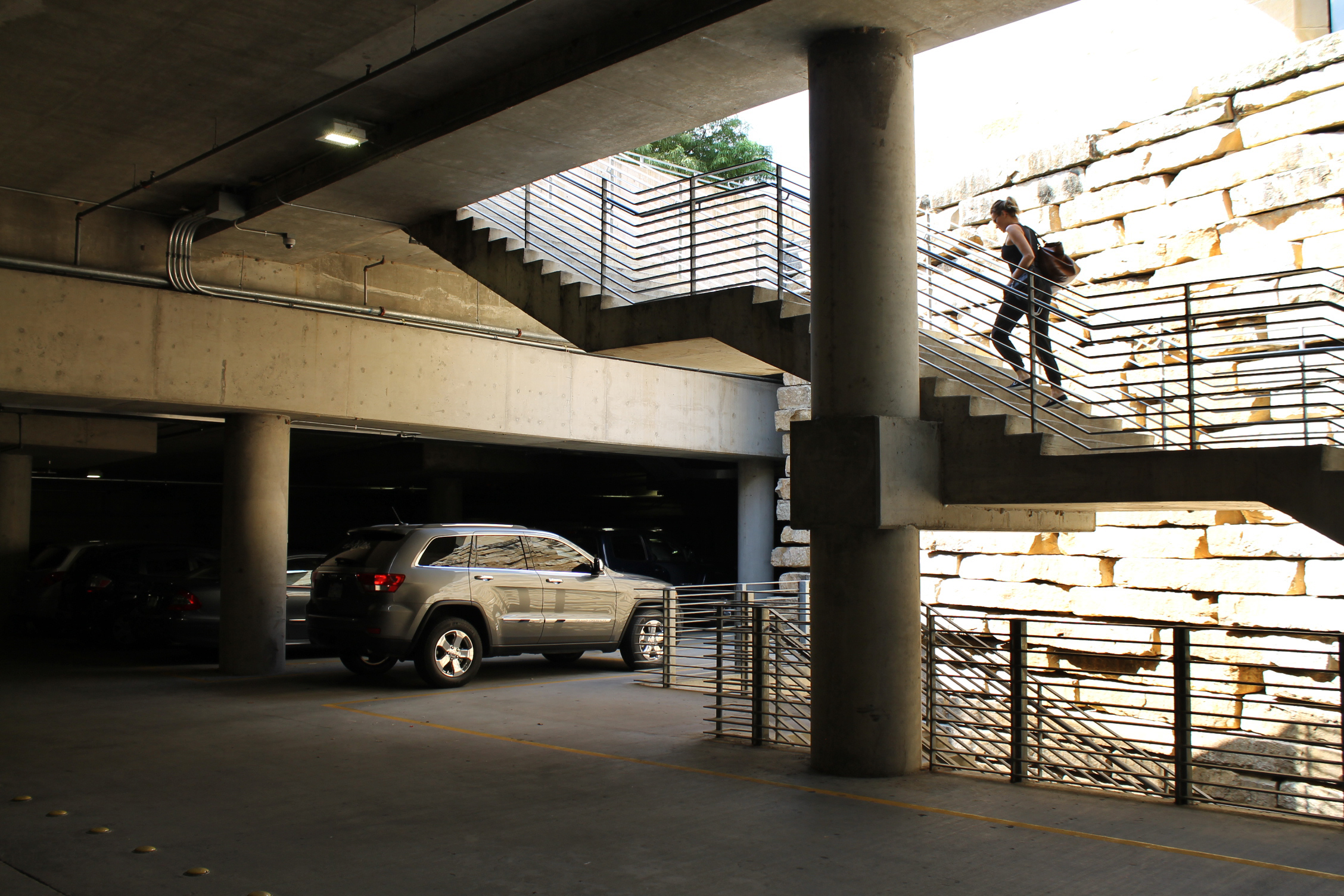 A woman ascends the stairs of Austin City Hall’s parking. 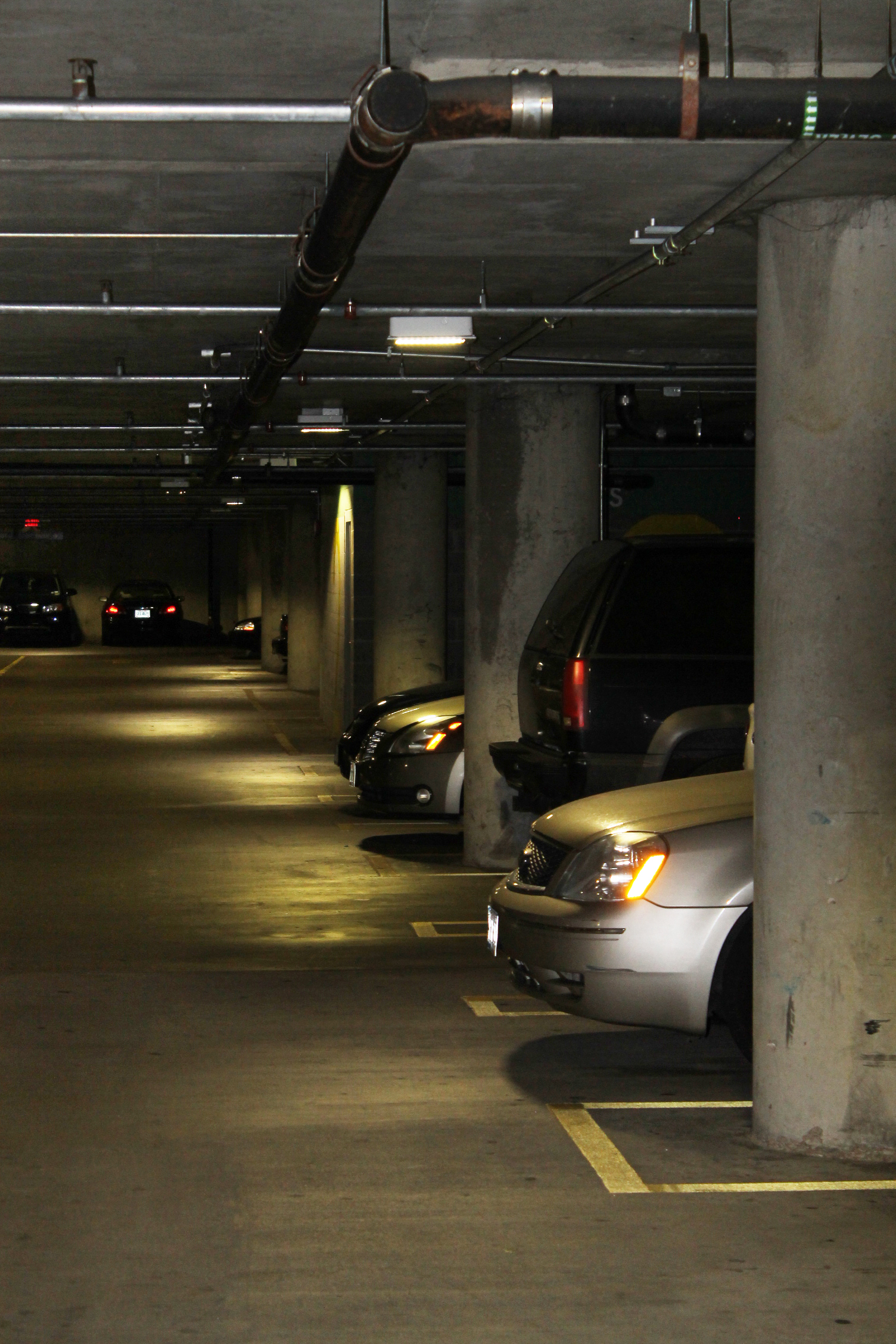 The garage at Austin City Hall is filled up quickly on a busy day. 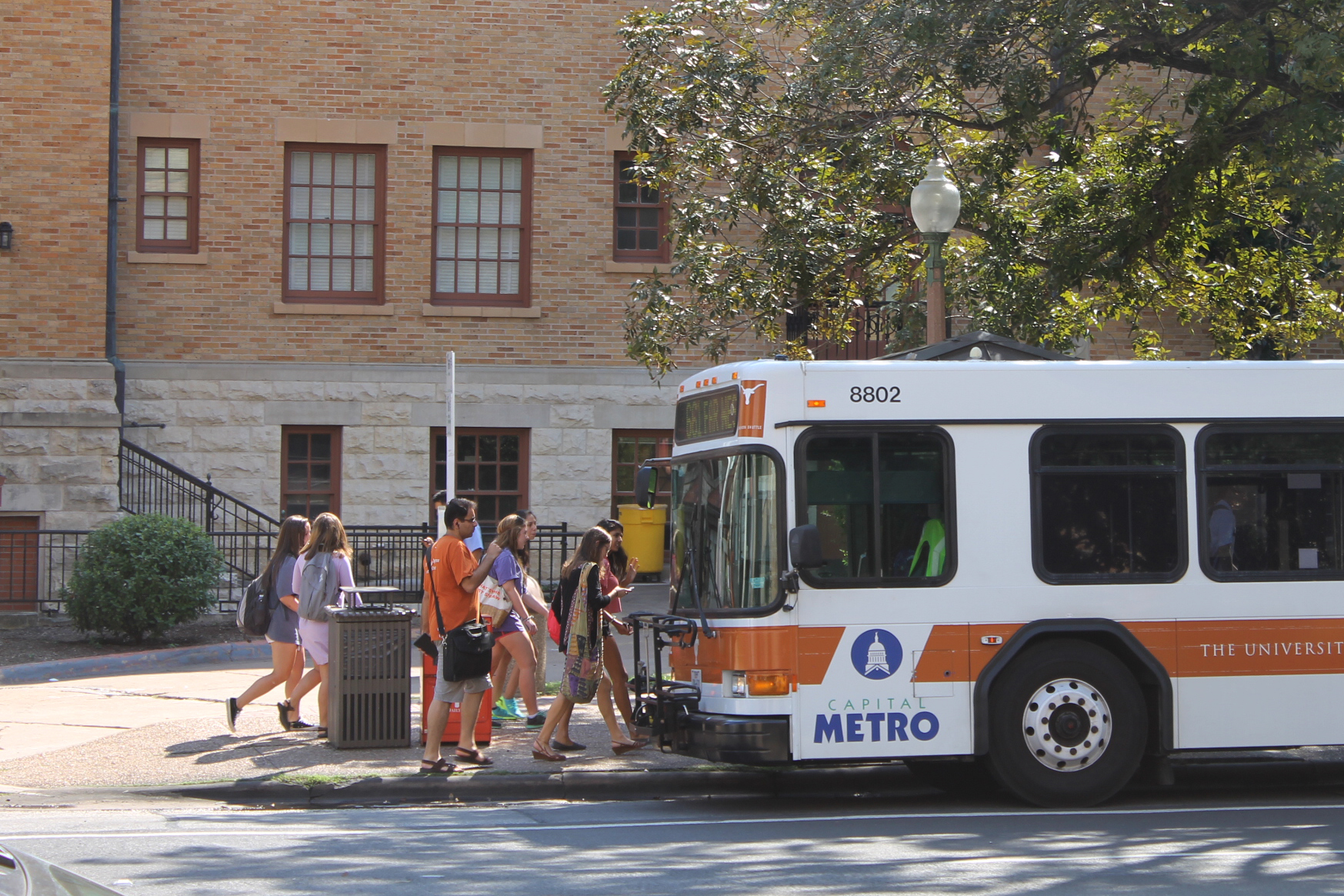 Students flocked to the shuttle at the University of Texas bus stop. 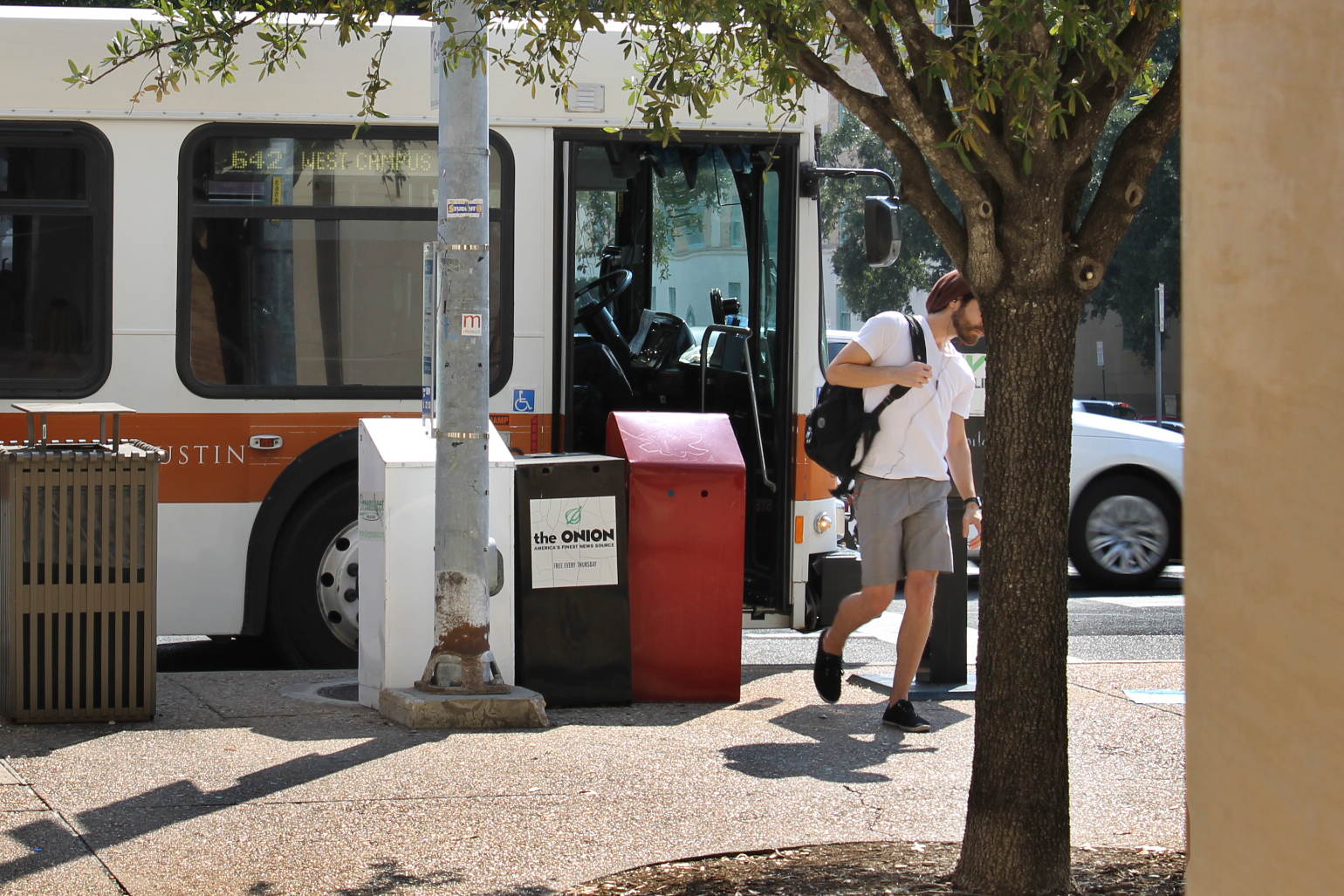 A student was getting off the West Campus shuttle at the University of Texas. 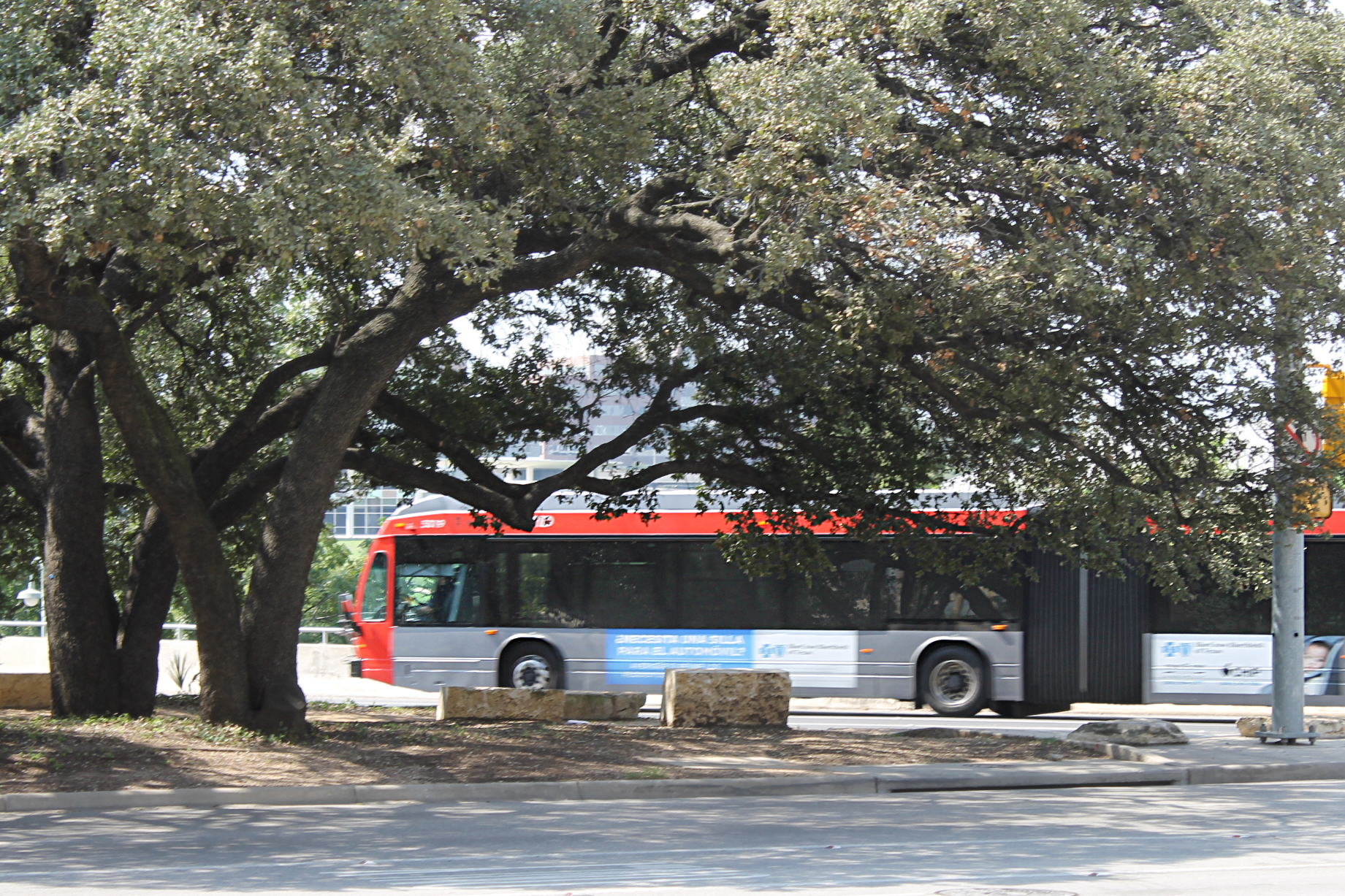 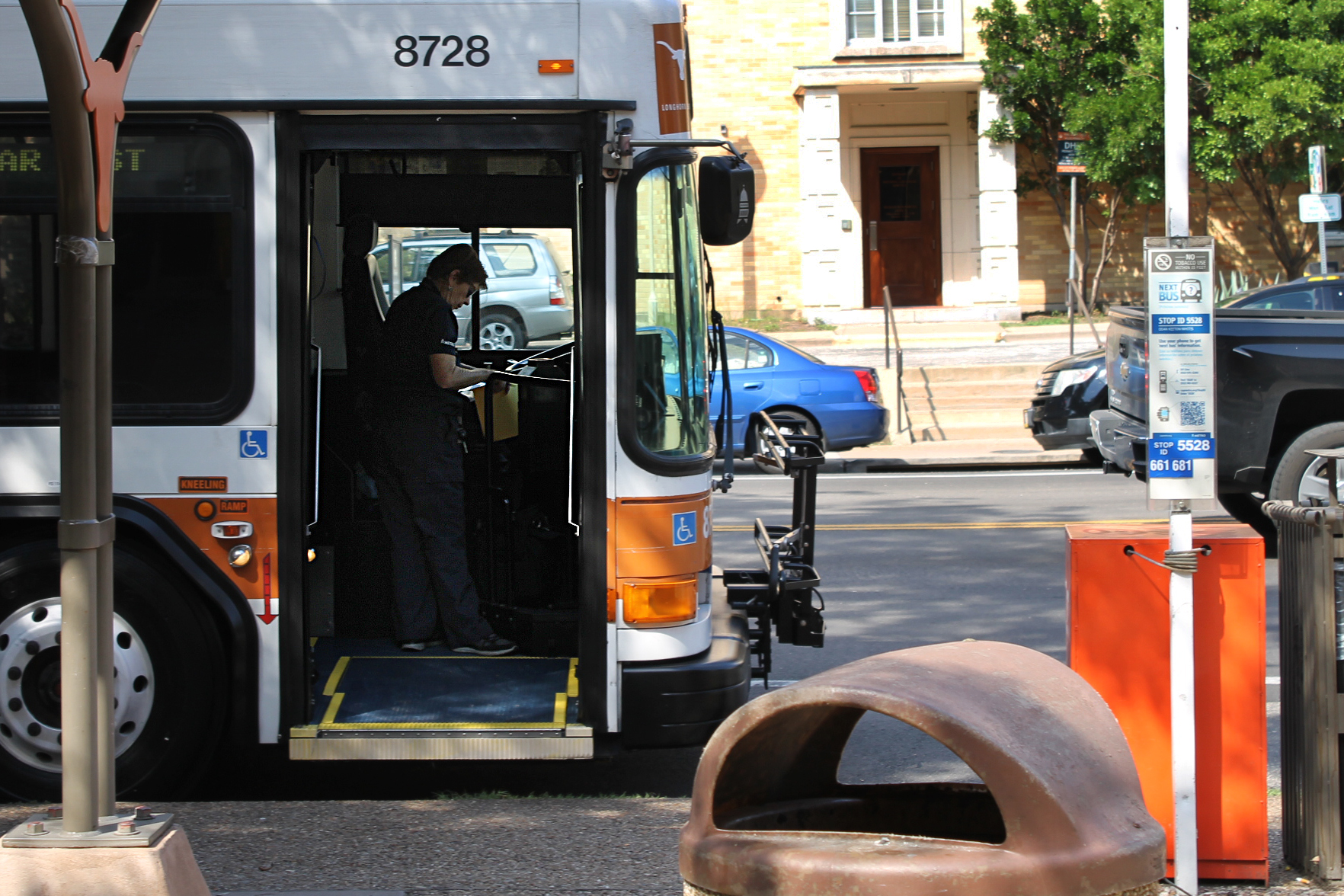 A University of Texas shuttle driver was waiting between pick-up times. 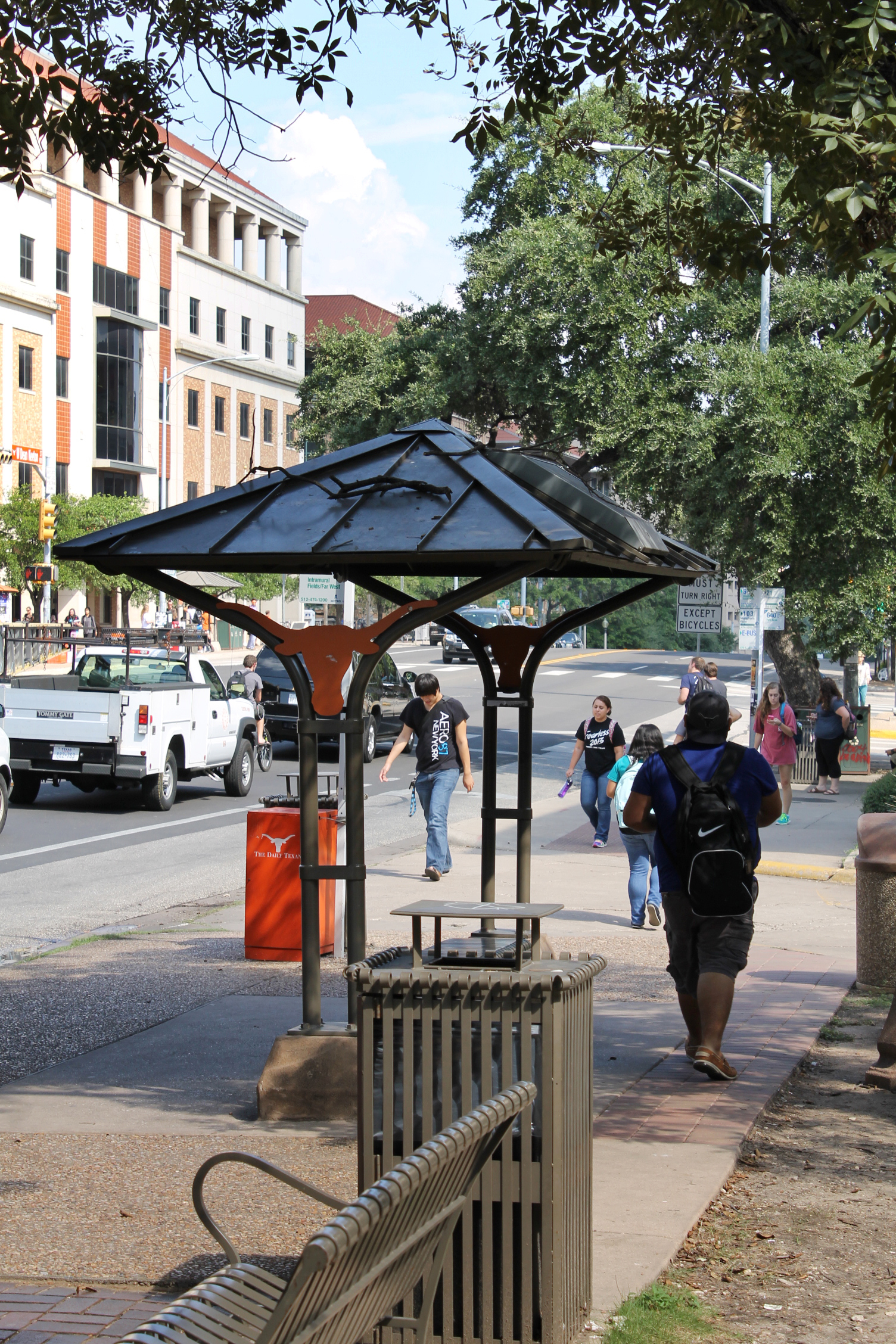 A shuttle stop at the University of Texas. The university has introduced a new transportation option called “Safe Ride.” 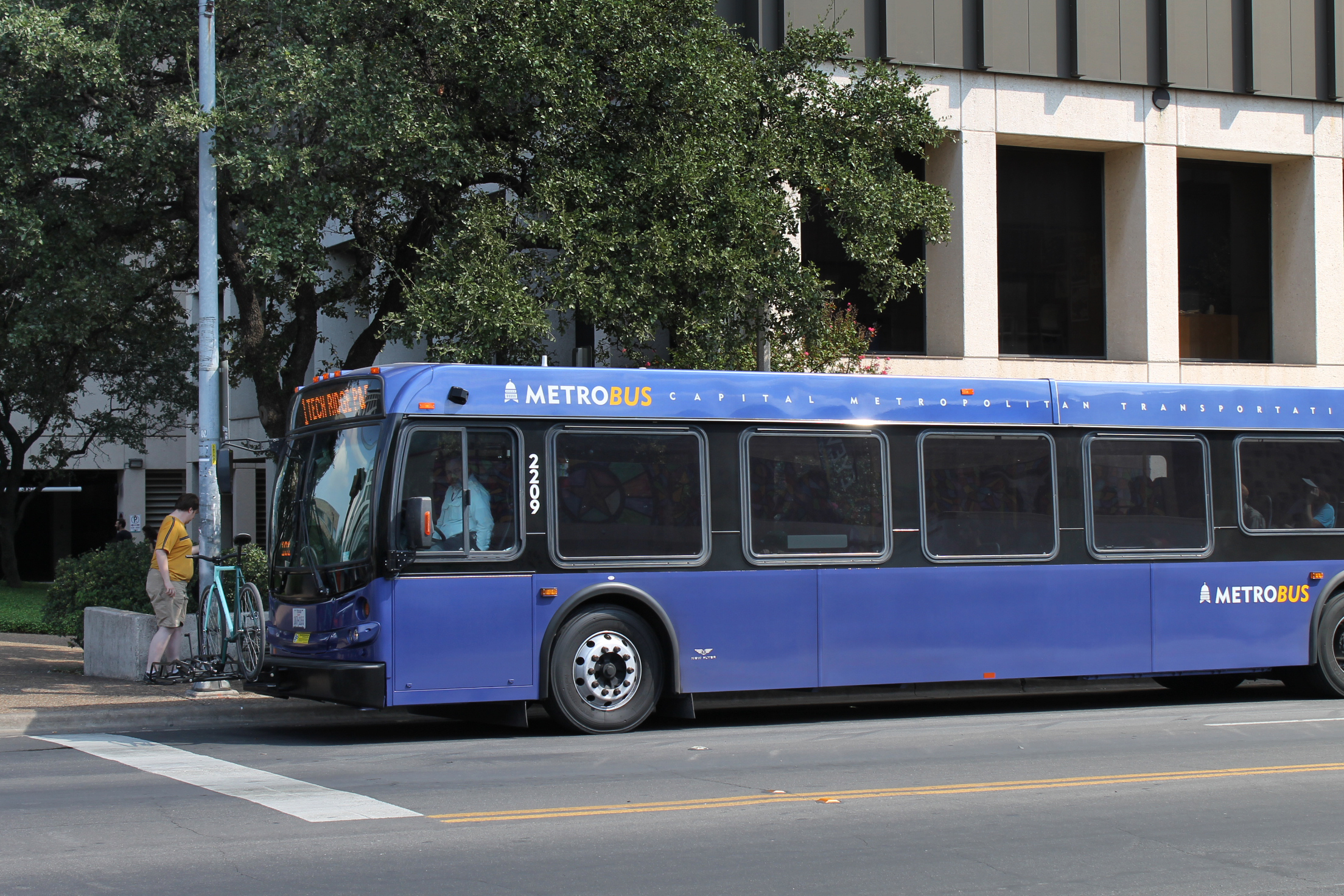 The #1 bus replaced the #1L and #1M buses, routes of which were covered by Capital Metro Rapid bus that opened in January.

The University of Texas’ Student Government has worked in conjunction with the university’s parking and transportation service and local business uRide to provide free rides to students on three nights of the week, Thursday through Saturday.

While much more limited in scope than Uber or Lyft, the new program, called Safe Ride, represents an attractive alternative to those who live in West Campus and East Riverside.  The service is currently available only in those two areas.

Blanca Juarez serves as transportation manager for the university, and laid out in simple terms why the program would appeal to those able to use it.

“Safe ride is a free program,” Juarez said.  “And it may be faster than some other services offered today.”

While Riley hasn’t seen enough of the Safe Ride program in action to pass judgment on it, he is pleased to see another option opening up for citizens looking for transportation.

“I like the idea of exploring new opportunities,” Riley said.  “We need to be open to new options, new ways of meeting our transportation needs.” 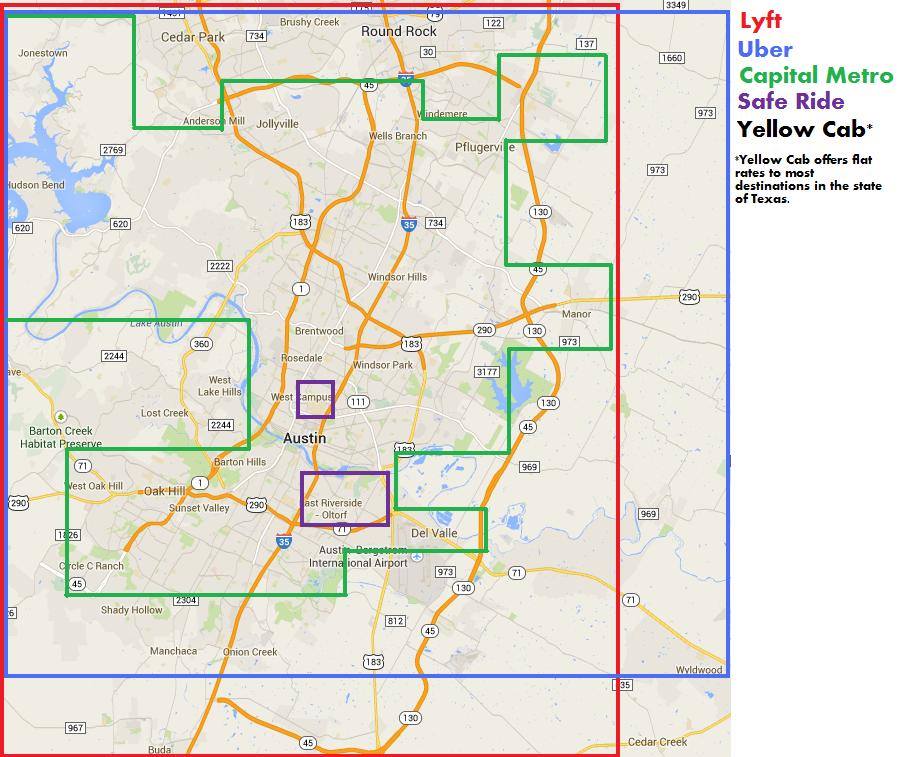