Red bikes with baskets are becoming a common sight along the city streets of Austin, Texas. The B-Cycle program, which launched in December of 2013, is a 24-hour, seven-day-a-week bike-share program that has gone from 11 stations to 45 stations, doubled its first usage projections and set national records. 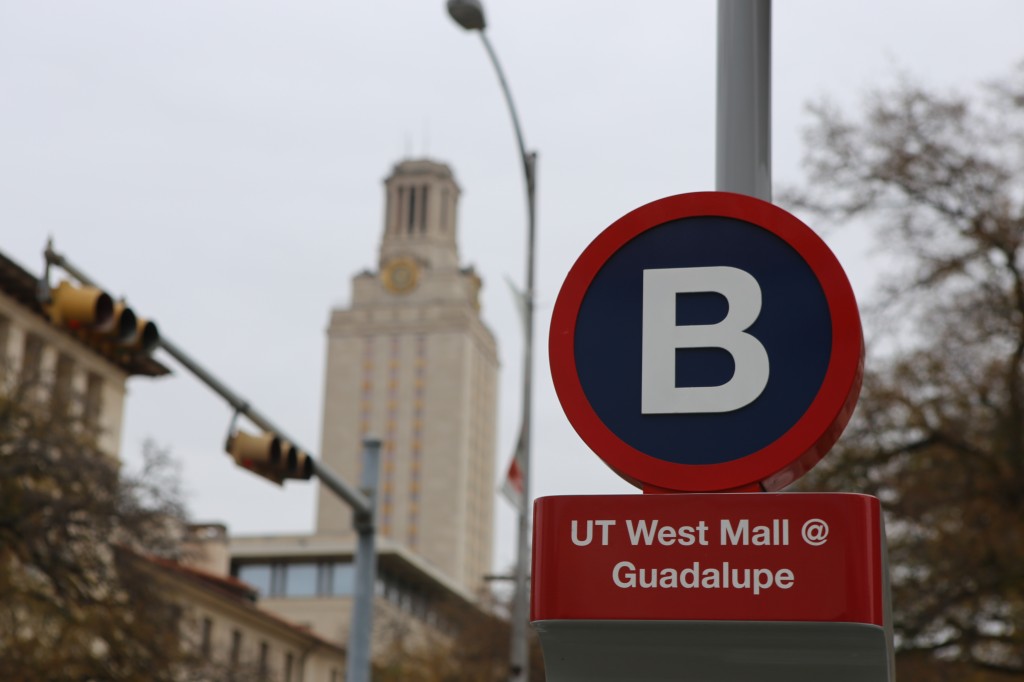 The main goal of the program is to bridge the transportation gap in public transit by providing a final-mile connector from the city’s mass transit system to their final destination and to reduce Austin’s traffic downtown.

However, many believe B-Cycle could be harming a different traffic problem – bicycle safety. 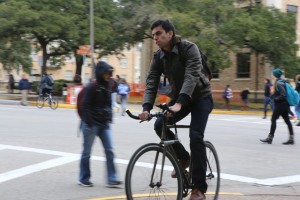 “I don’t really feel that safe as a bike rider myself,” said Bea Scott, a frequent bike rider in Austin. “A lot of times, a lot of people don’t really know what they’re supposed to do.”

Scott referred to both cyclers and drivers having confusion on the roads, which in turn, can cause a lot of accidents. In fact, the city of Austin has seen its bicycle accidents increase by 15 percent almost every year since 2007.

With the increase in bicycles due to the B-Cycle program, some are expecting this will only continue and perhaps get even worse.

“I’ve just heard such horror stories about people getting hit because there’s confusion as to who is turning or if the biker was going to go through a crosswalk,” Scott said. “Because of that confusion and also the fact that a lot of people don’t wear helmets, it’s really concerning.”

Although the number of bicycle accidents is increasing in Austin, the percent might be higher if all 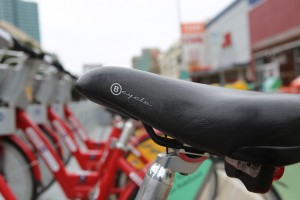 Austin B-cycle was created to provide Austinites and locals another mode of transportation to explore downtown and the surrounding area. Photo by Landon Pederson.

accidents were reported. The Austin Police Department recently released a statement saying “people tend to only report a bicycle accident to the police when there is an injury or major damage. Most bicycle accidents go unreported by the parties involved.”

Despite all of the controversy, B-Cycle officials have yet to see a problem with its program.

“It hasn’t really been an issue for us,” said Elliott McFadden, the CEO of B-Cycle Austin. “Bike share systems have a stellar safety record throughout the world, and that is so far the case here.”

Austin resident Joy Messie does not see an issue either. 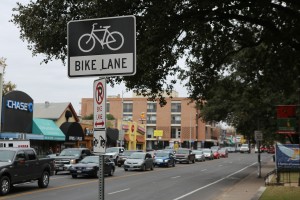 “I’ve moved around a lot, and this is definitely the city I’ve lived in that has the most bike lanes and most biker-friendly stuff,” Messie said. “Some of the drivers in the city I think could do a better job.”

The answer to the question of bicycle safety in Austin remains split, but there are people out there trying to improve the city’s conditions. Nathan Wilkes, an engineer with Austin’s Bicycle Program, said Austin is looking to create a plan that would make for a safer transportation system.

He also added that 39 percent of residents fall into the category of “interested but concerned” to ride a bicycle on the streets. Wilkes said he believes there are ways to make cycling a more appealing option.

One includes what was recently implemented on Guadalupe Street – a cycle track that is physically separated from motor vehicle traffic.

Nevertheless, there are still concerns for increasing bicycle accidents with the new B-Cycle program, especially because the program enables people to ride bikes that don’t normally use them on the city’s roads. 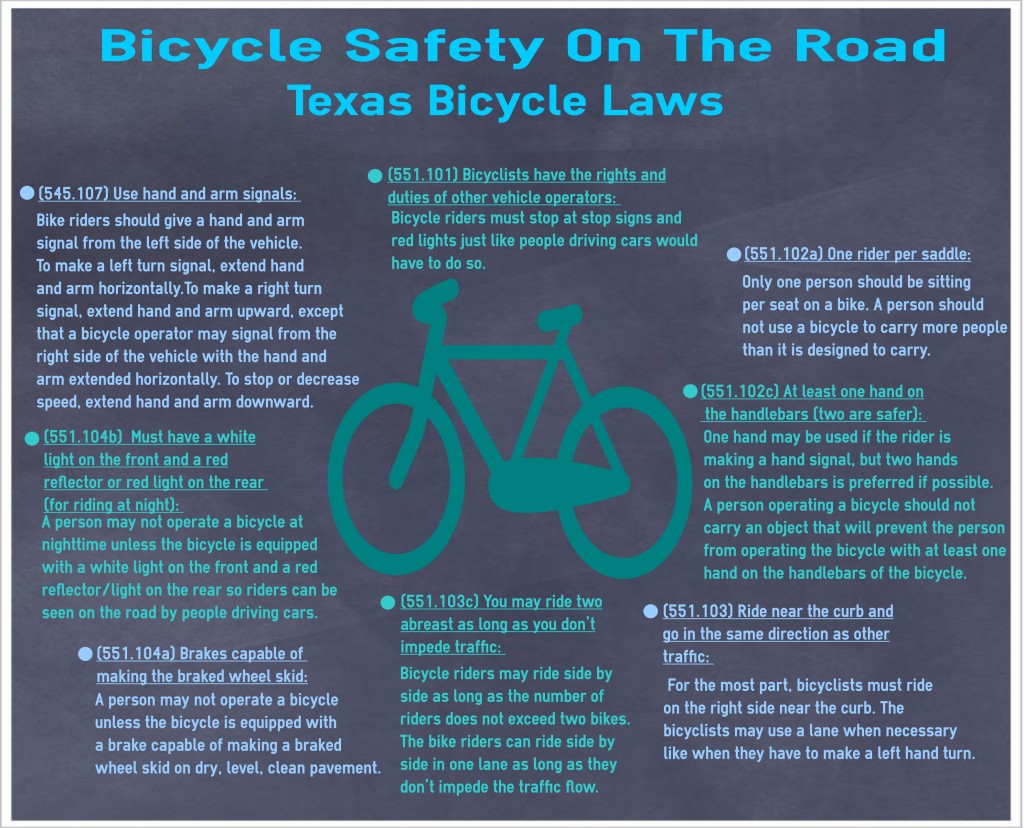 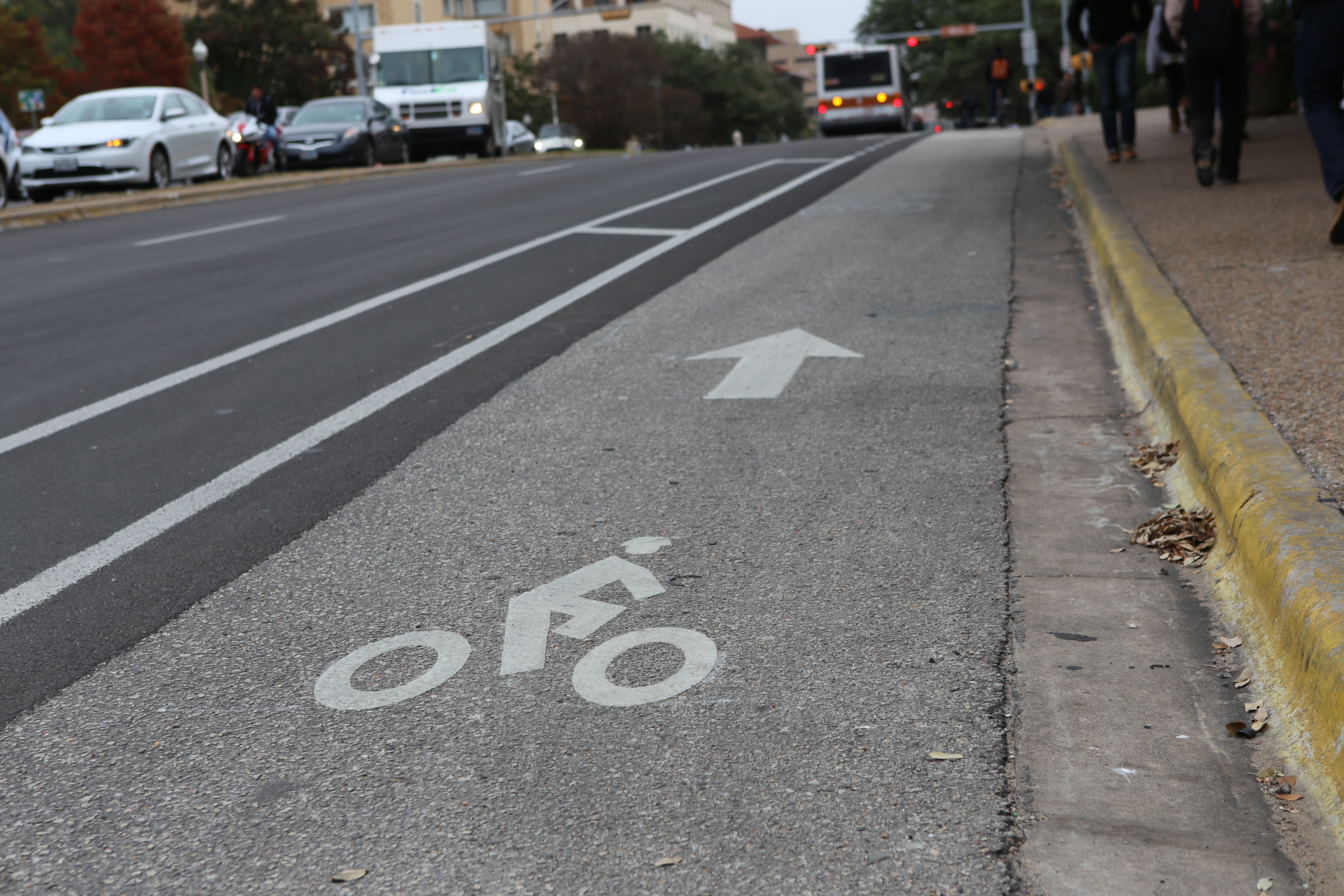 Austin B-cycle launched in December 2013 and now has over 40 stations throughout the capital of Texas. Photo by Landon Pederson. 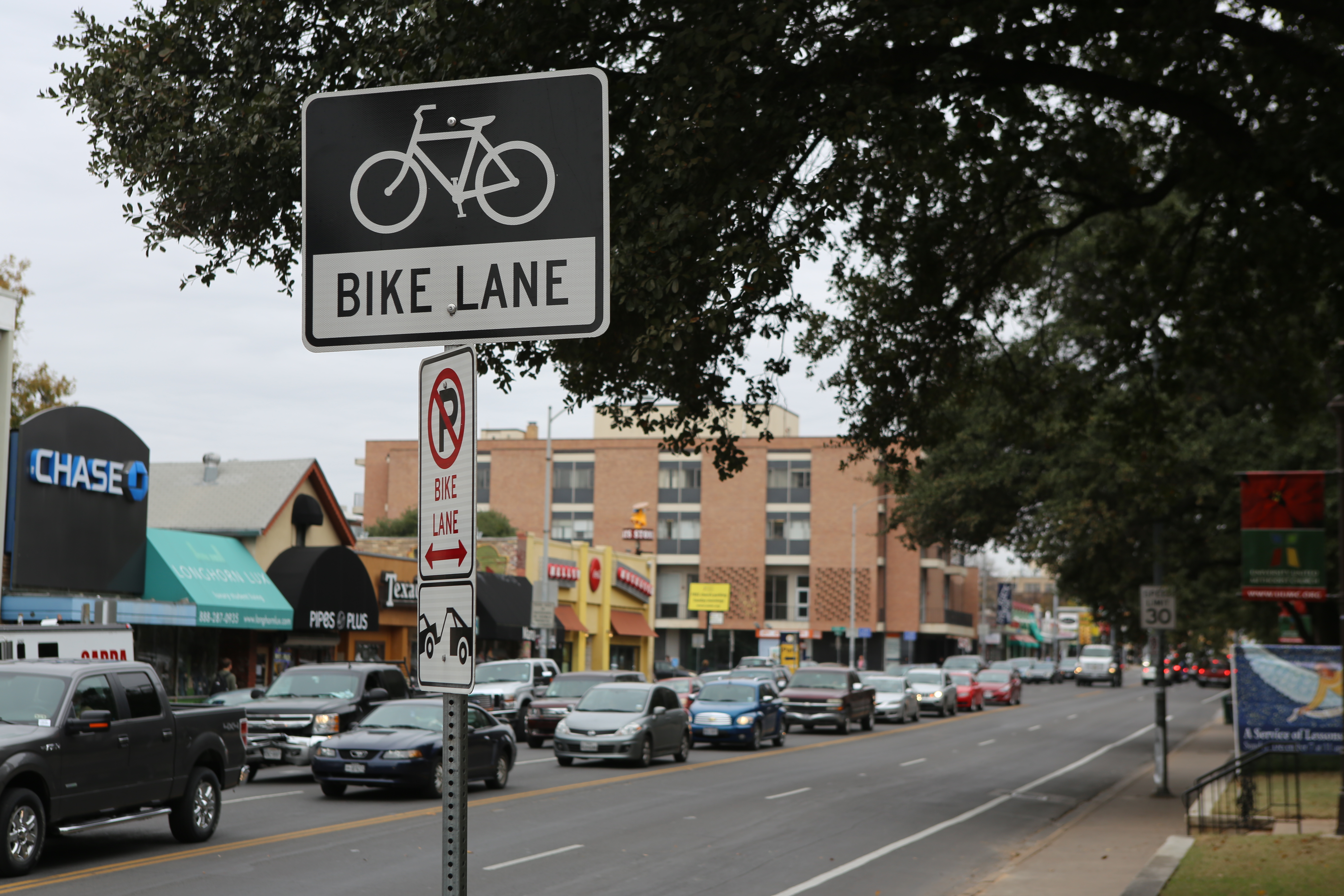 According to www.bicycling.com, Austin ranked 13th in the 2012 Top 50 Bike-Friendly Cities list and moved up two spots to 11th in 2014. Photo by Landon Pederson. 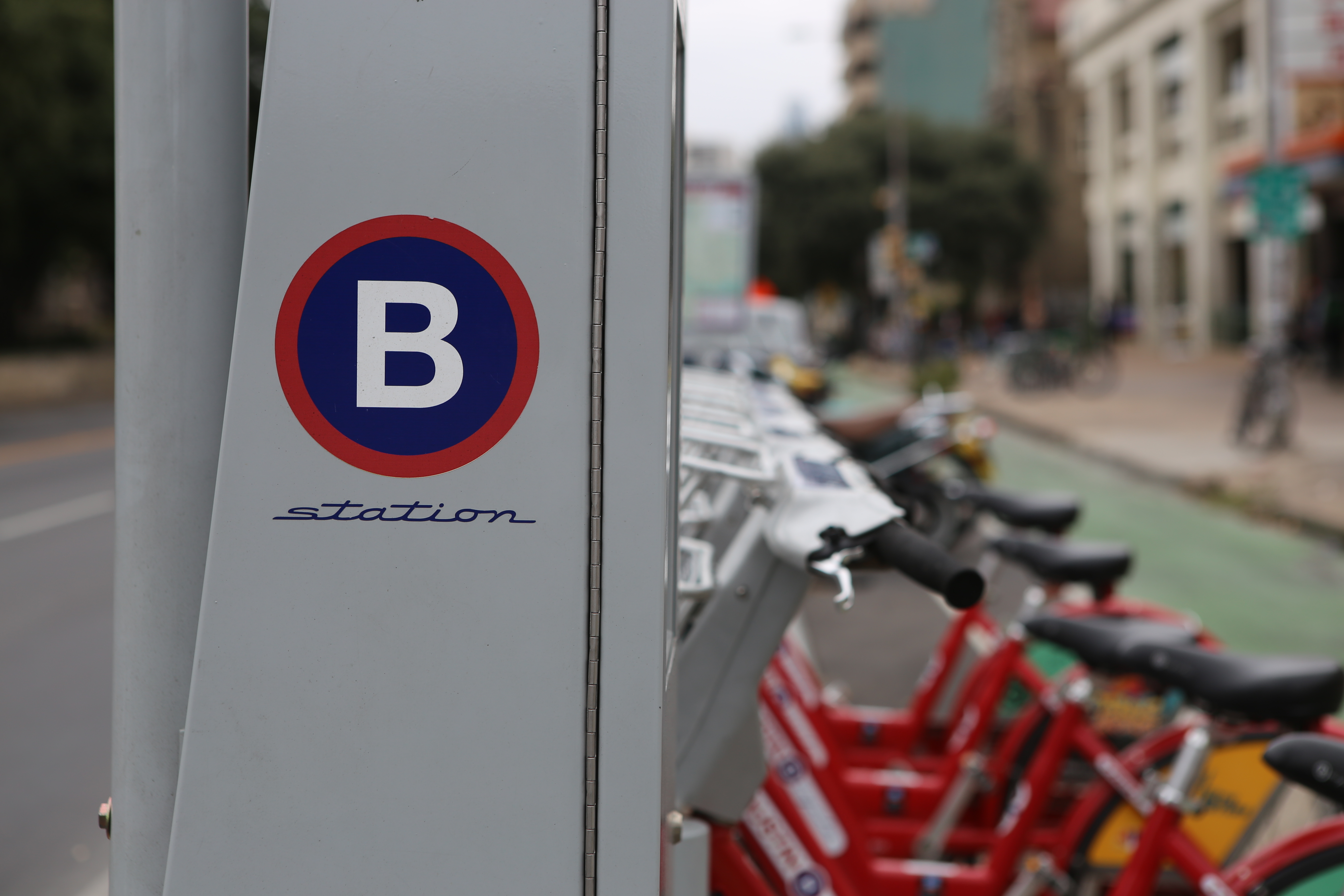 Austin B-cycle is operated by Bike Share of Austin, a 501 ©3 non-profit corporation. Photo by Landon Pederson. 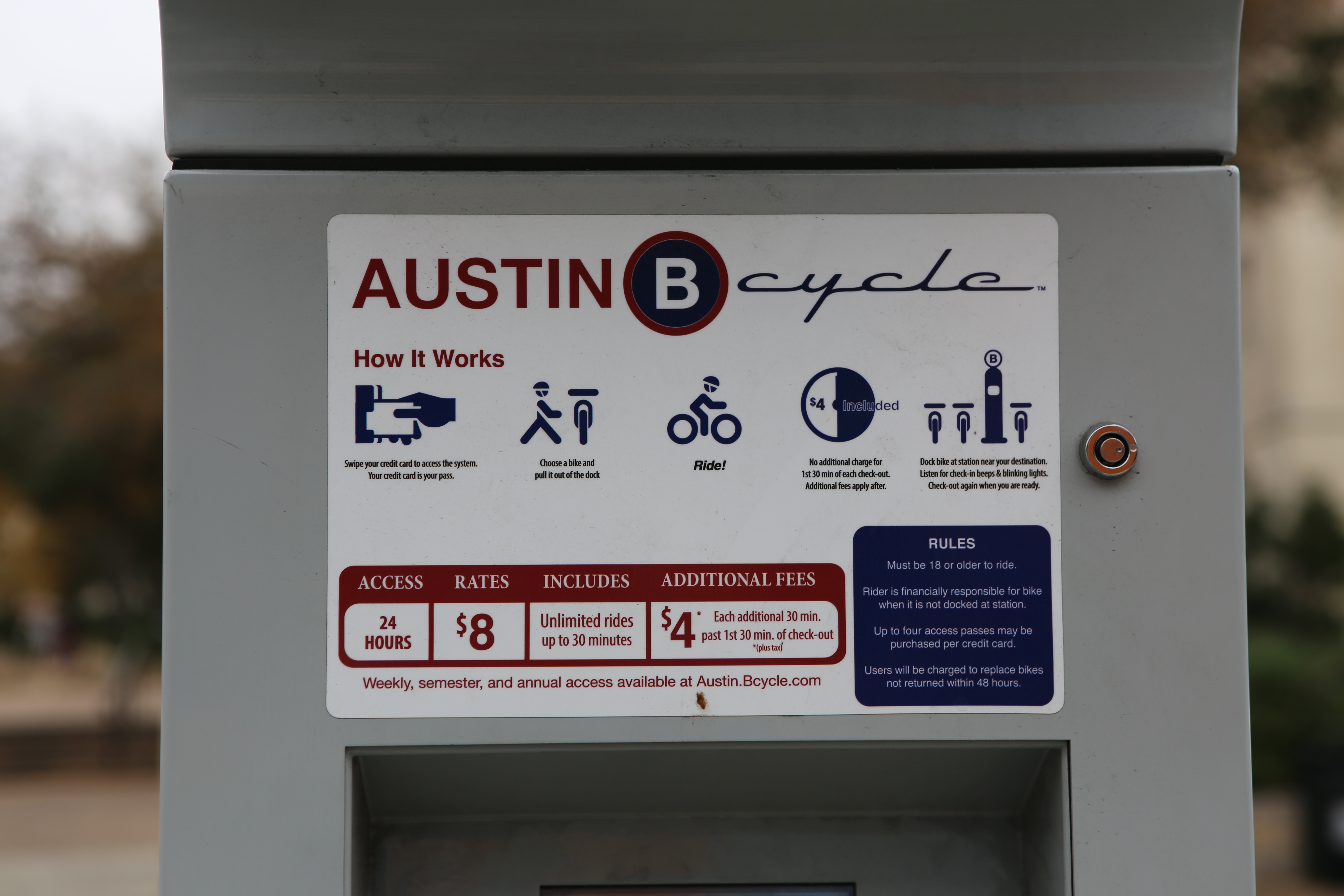 Elliot McFadden, CEO of Austin B-cycle, said safety has not been an issue yet for this location and others throughout the country. Photo by Landon Pederson. 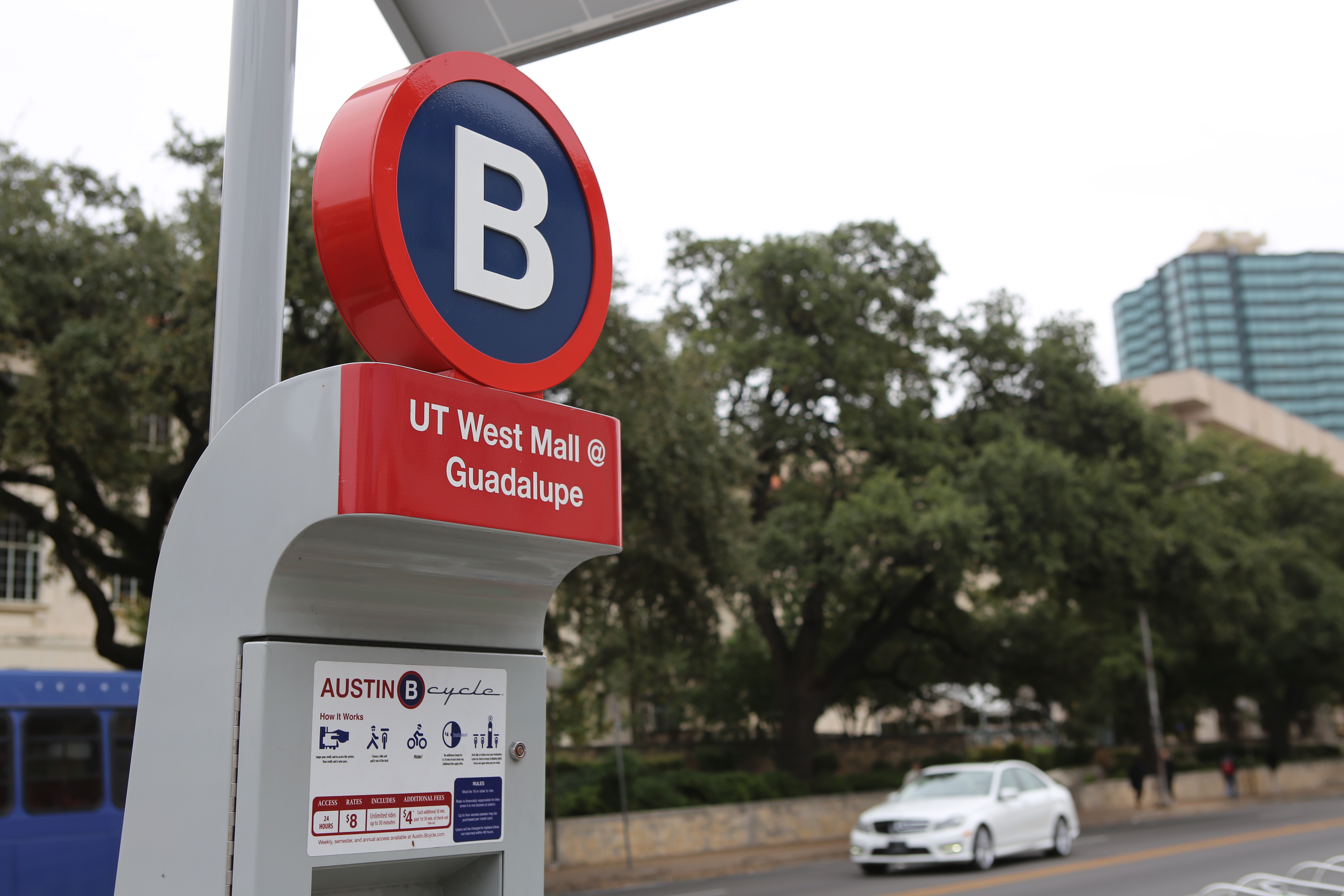 There are over 20 B-cycle stations located throughout the United States, including one in Hawaii. B-cycle has also expanded outside of the U.S., with one station located in Chile. Photo by Landon Pederson. 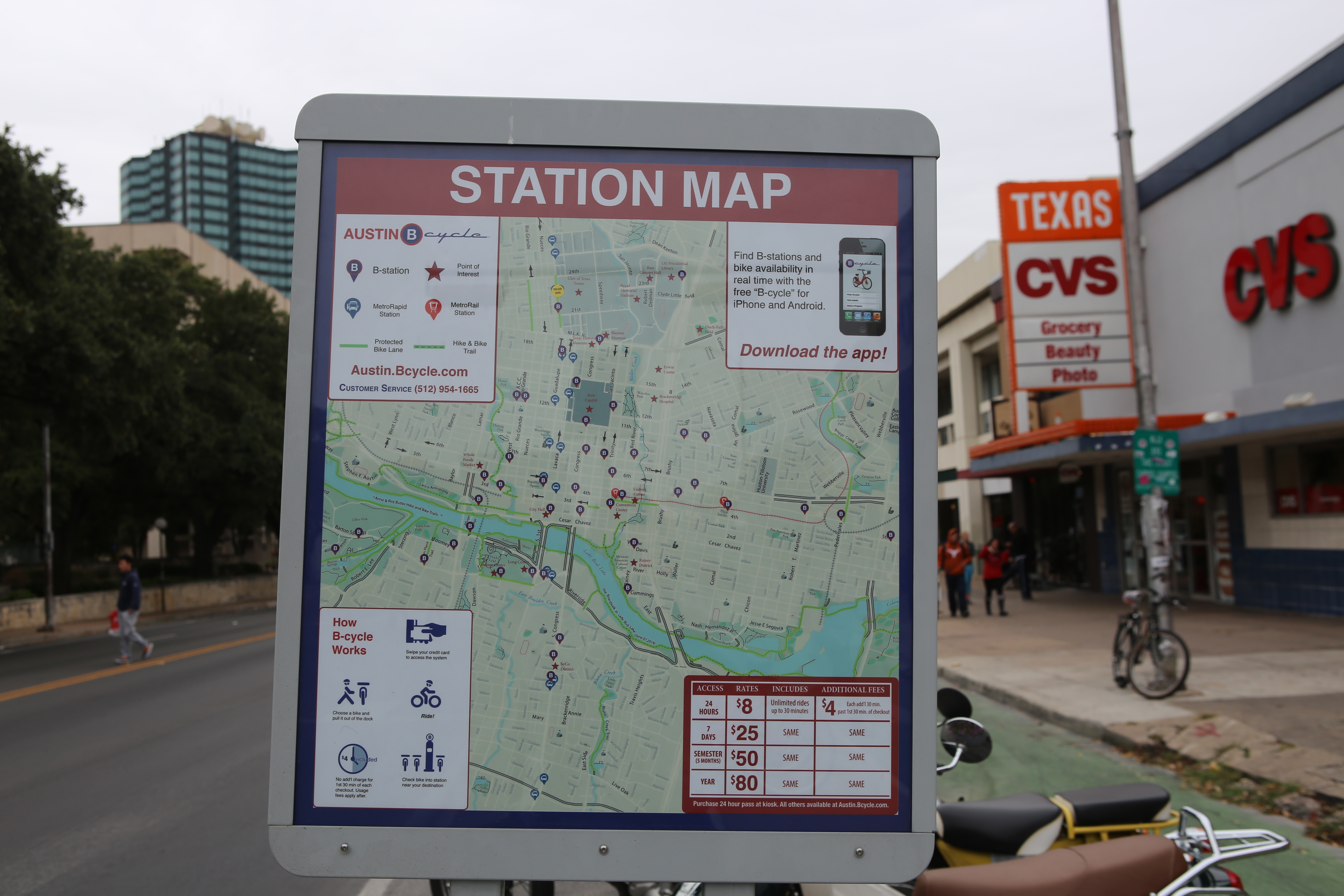 Each B-cycle station has a map that features other B-Cycle locations, bike lanes, and bike trails throughout downtown Austin. Photo by Landon Pederson. 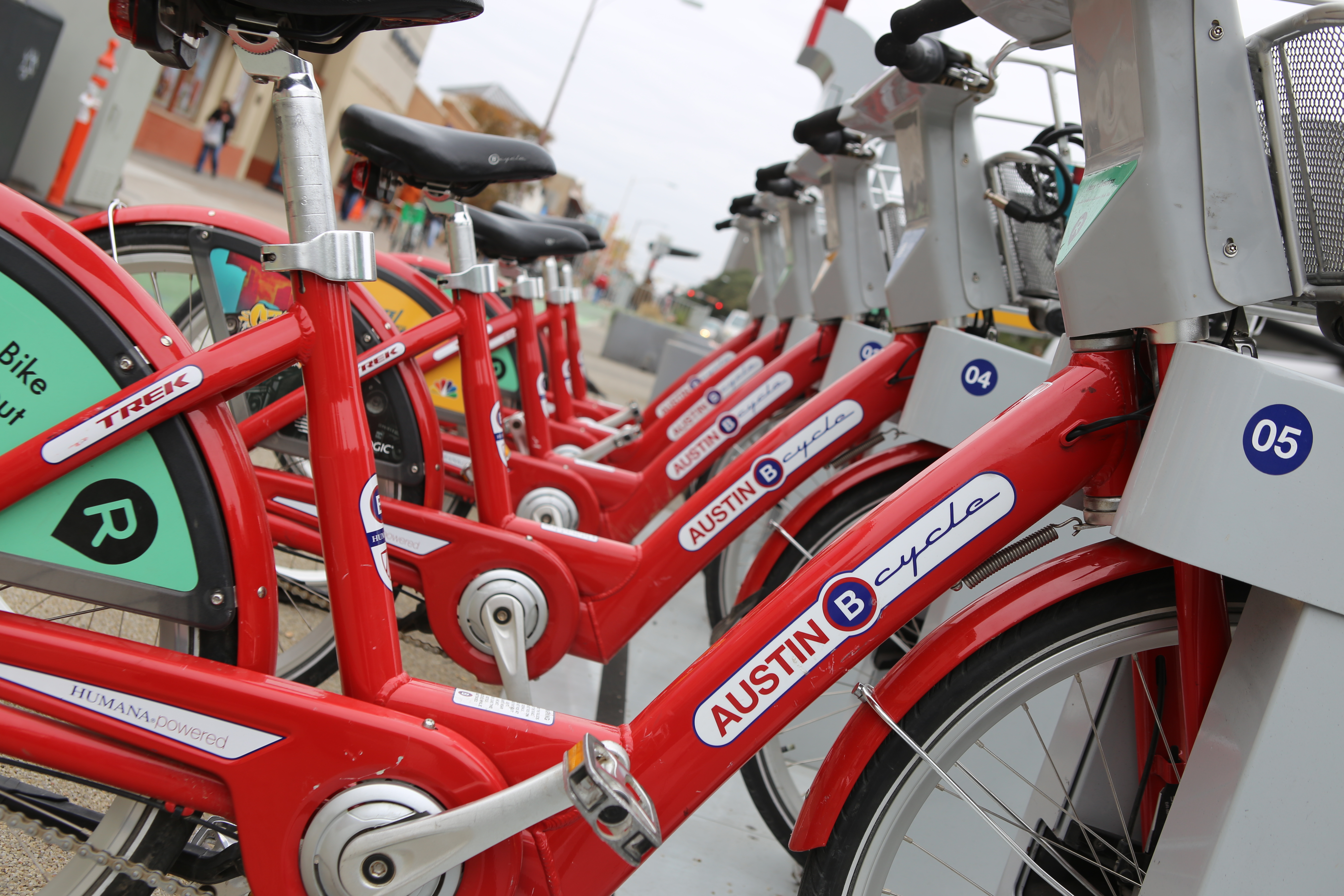 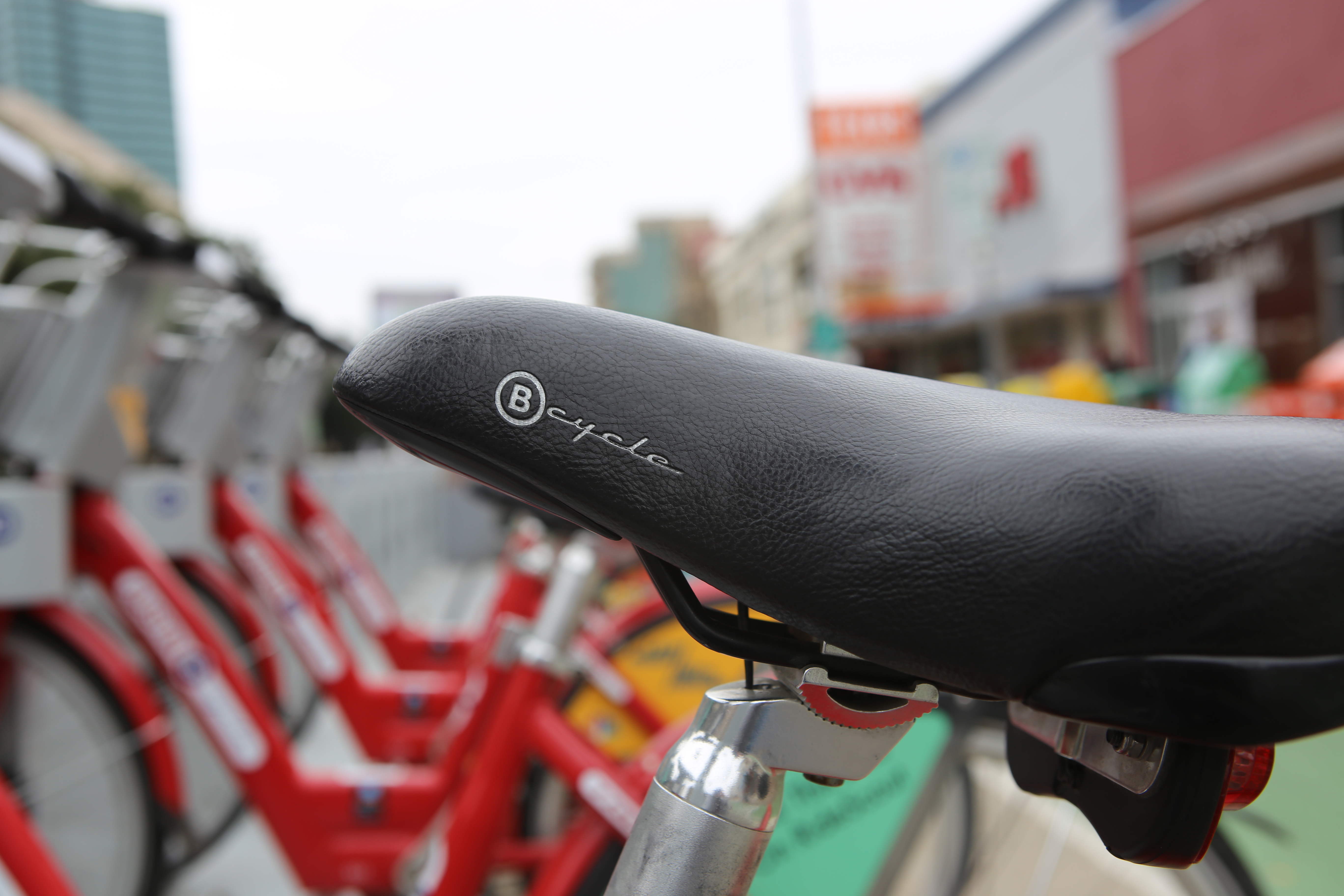 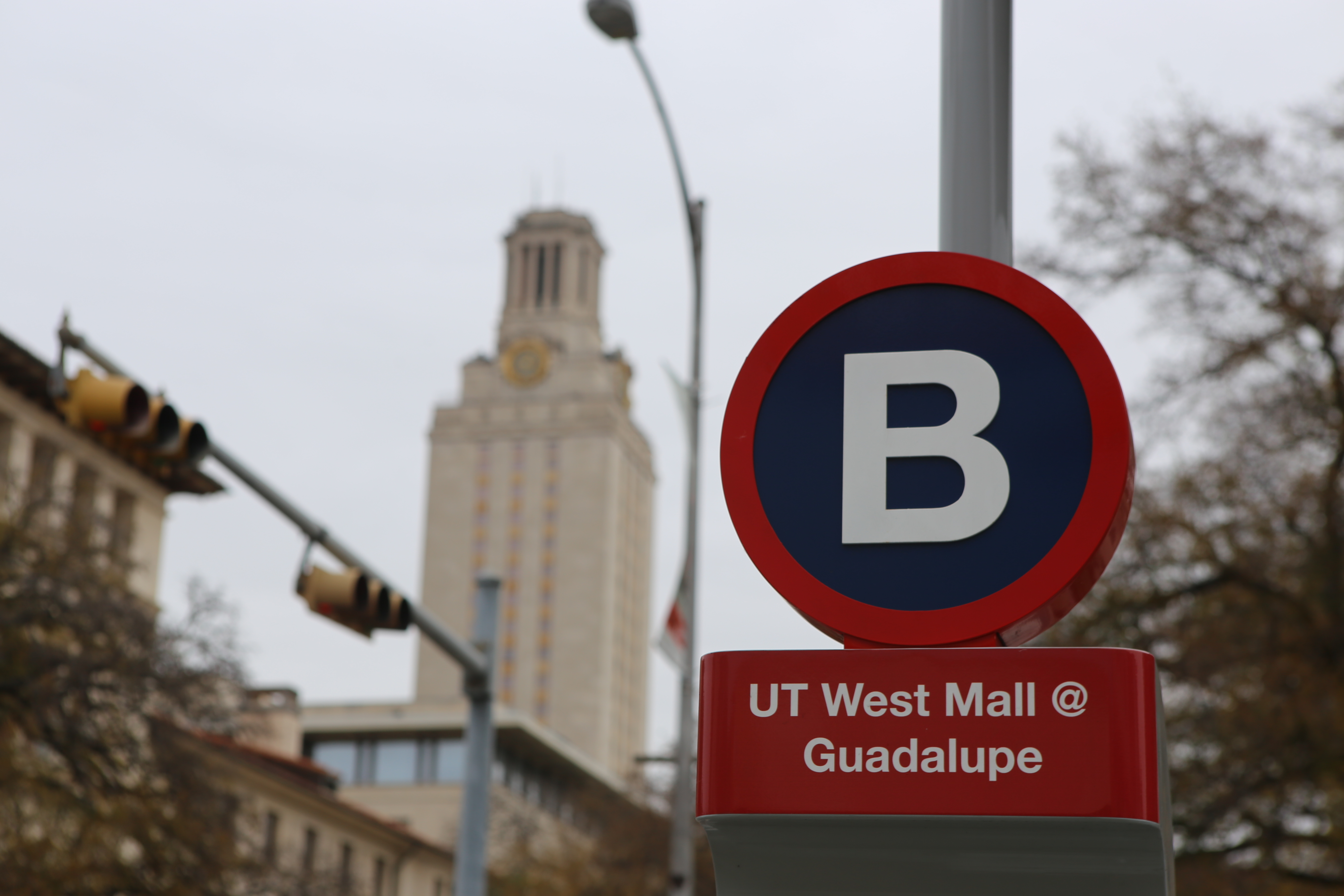 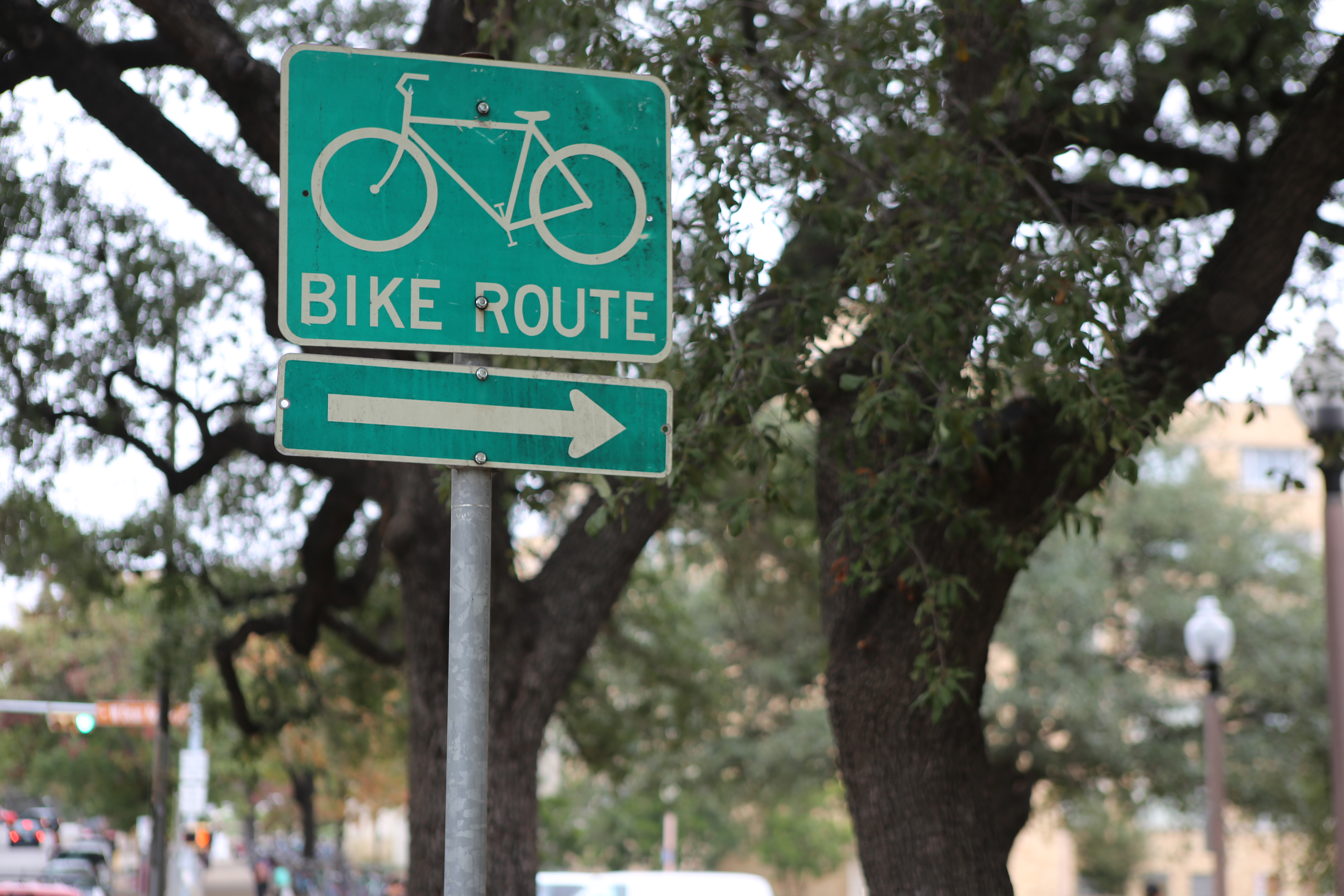 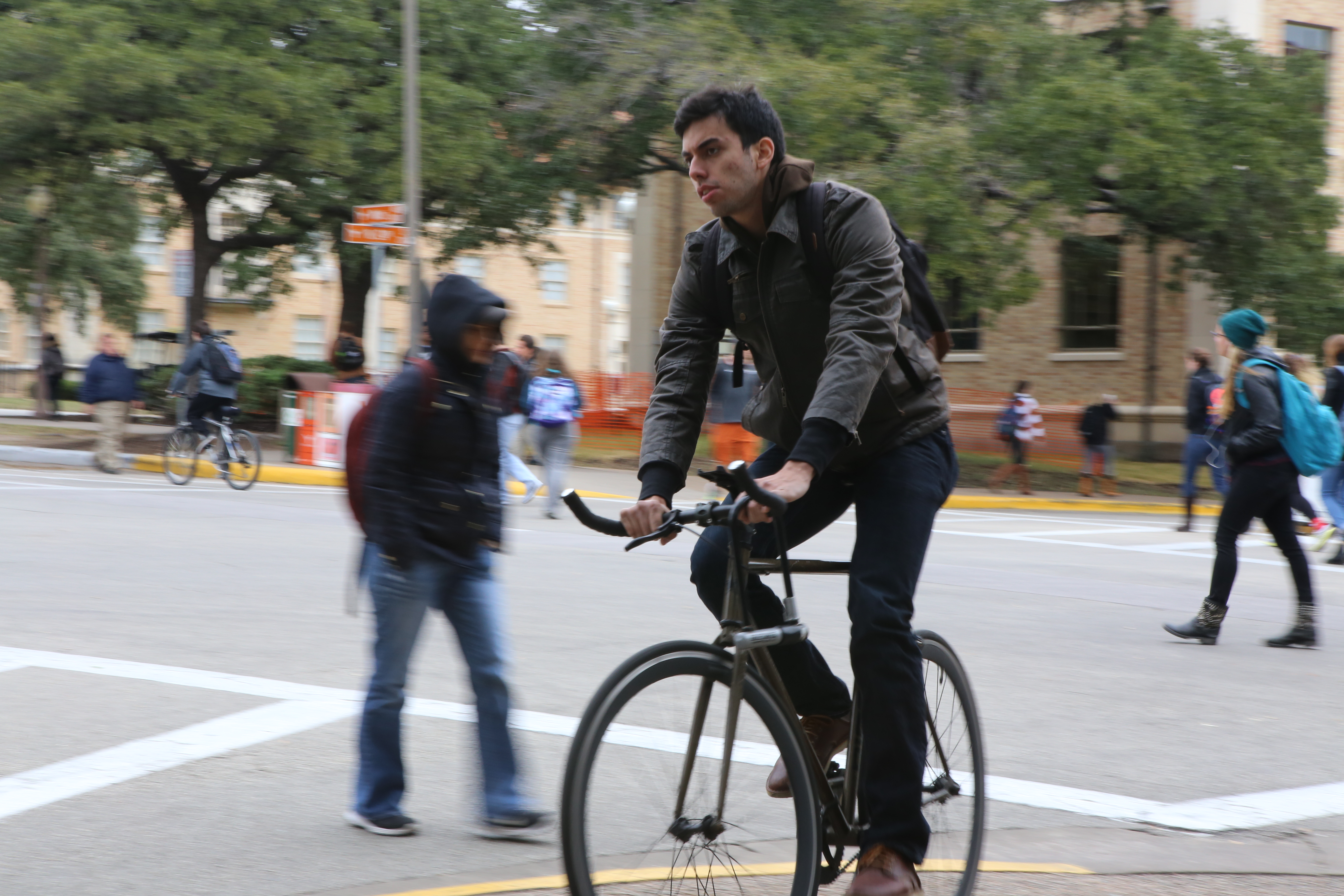