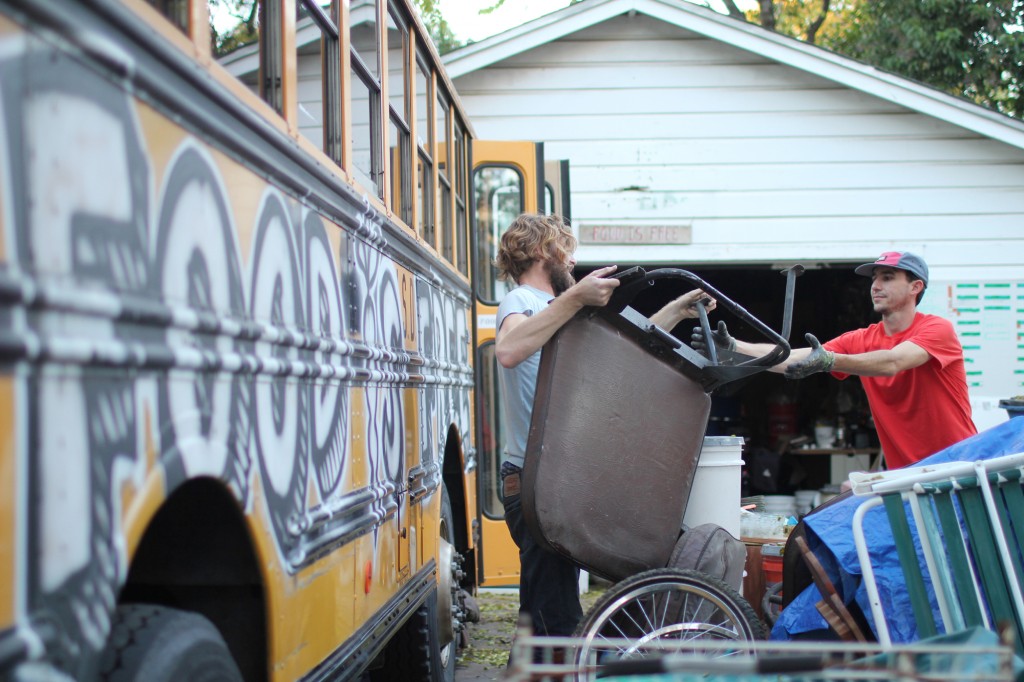 John V. Edwards and roommate Jeff Armstrong sort the furniture before they move to Arkansas. The Kickstarter campaign raised $45,000 but fell short of their goal of $250,000. (Credit: Lingnan Ellen Chen)

Austin’s continued growth may have driven from the city one if its most unique tenants.

The Food is Free Project is a nonprofit organization that began operating close to three years ago. Started with a single frontyard garden, the project soon spread through the surrounding neighborhood and turned into a communal happening.

“Food unites us.”
That’s the message that was given by John VanDeusen Edwards in a recent promotional video. It was assembled in the hopes of attracting community support and donations to Food is Free. Those funds were made necessary when the owner of the land Food is Free’s headquarters had to that point been based at decided that he was going to sell to a new buyer.

The location at 5608 Joe Sayers Ave. is yet another to fall victim to the growing influx of new Austin residents. Over the past 25 years, the inner city’s population has nearly doubled, with much of the metropolitan expansion turning inward as old properties are converted into new, more efficient uses of the land.

When he discovered that Food is Free would soon feel the effects of the city’s changing landscape, Edwards was concerned.

“It was disheartening, honestly, looking around at our farm, what we’ve put so much work into,” Edwards said.

The landowner, who declined comment, had made up his mind. Edwards and his compatriots at Food is Free would need to find a new home. To do that, Edwards reached out for monetary contributions.

The organization established an online funding campaign using Indiegogo, a crowdfunding website. The stated goal was to raise at least $250,000 towards the establishment of a new and permanent headquarters for the project, a place where the group’s efforts could be furthered and those new to communal gardening could be trained in the practice. 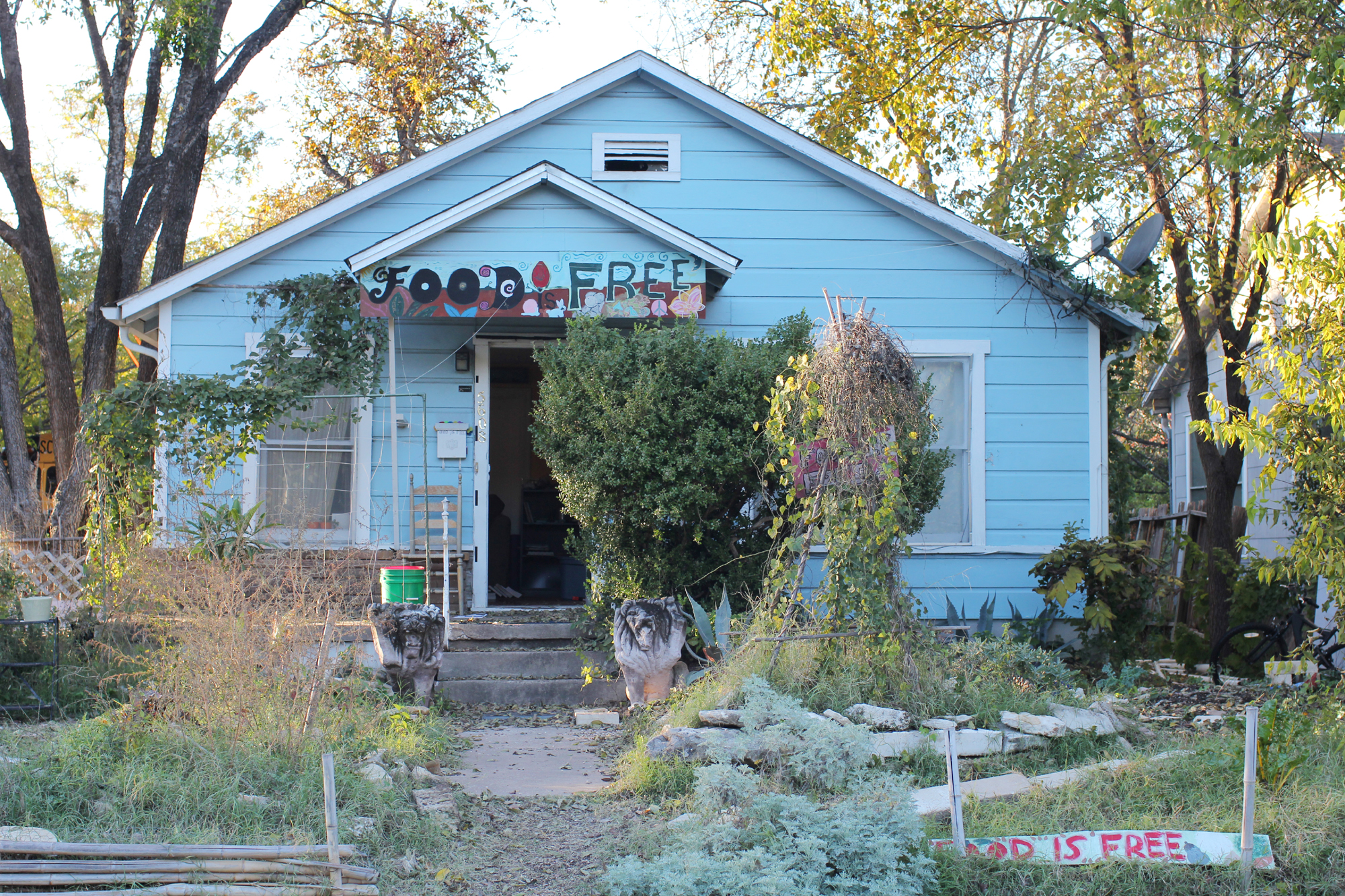 The Food is Free project has their farm located in north Austin, the fastest growing city in the United States. They will be moving their farm to Arkansas after their landlord sells the lot. (Credit: Lingnan Ellen Chen) 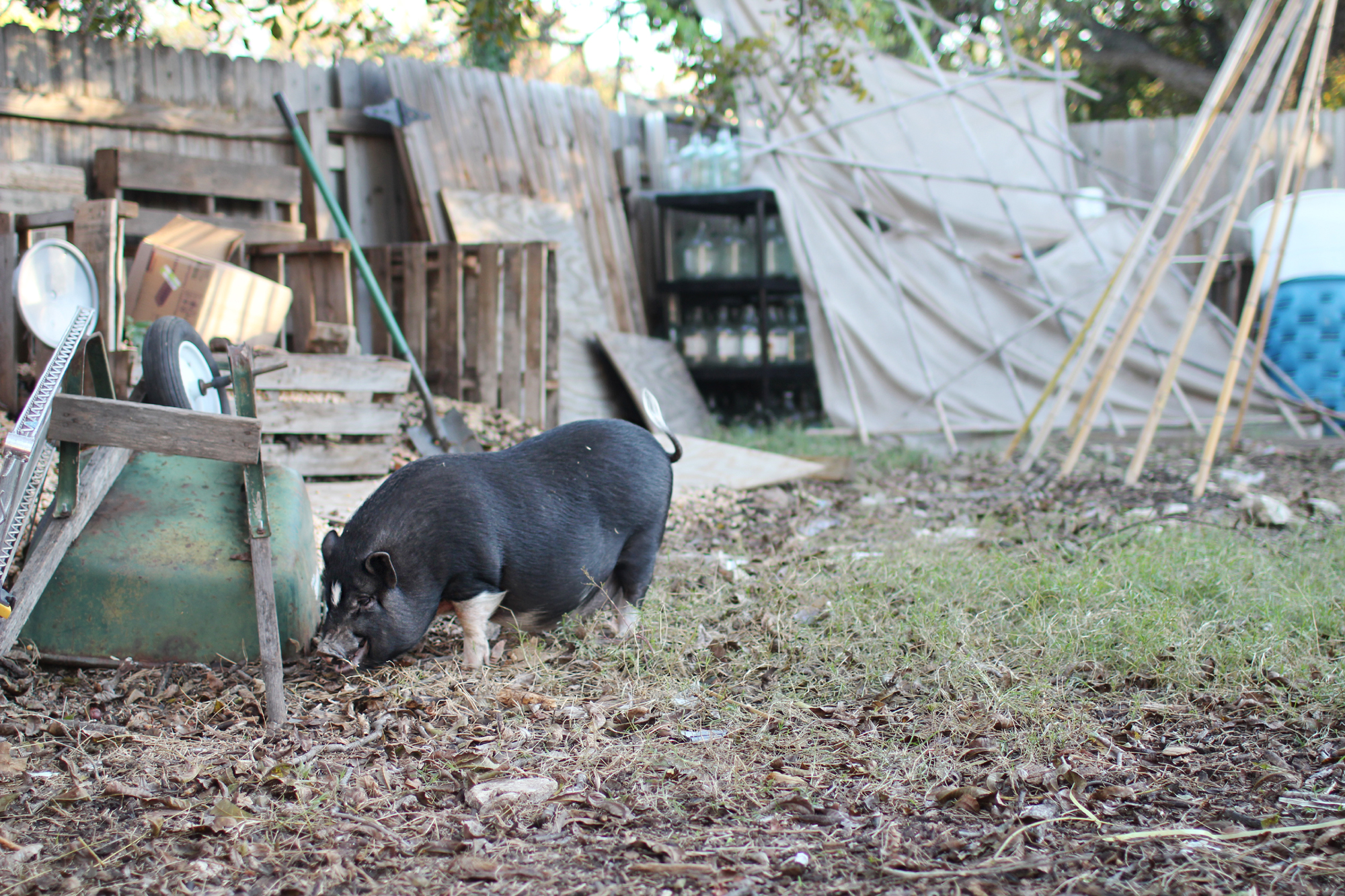 Their pet pig Matilda wanders on the farm. Matilda is a farm animal but she is not, however, to be eaten. (Credit: Lingnan Ellen Chen) 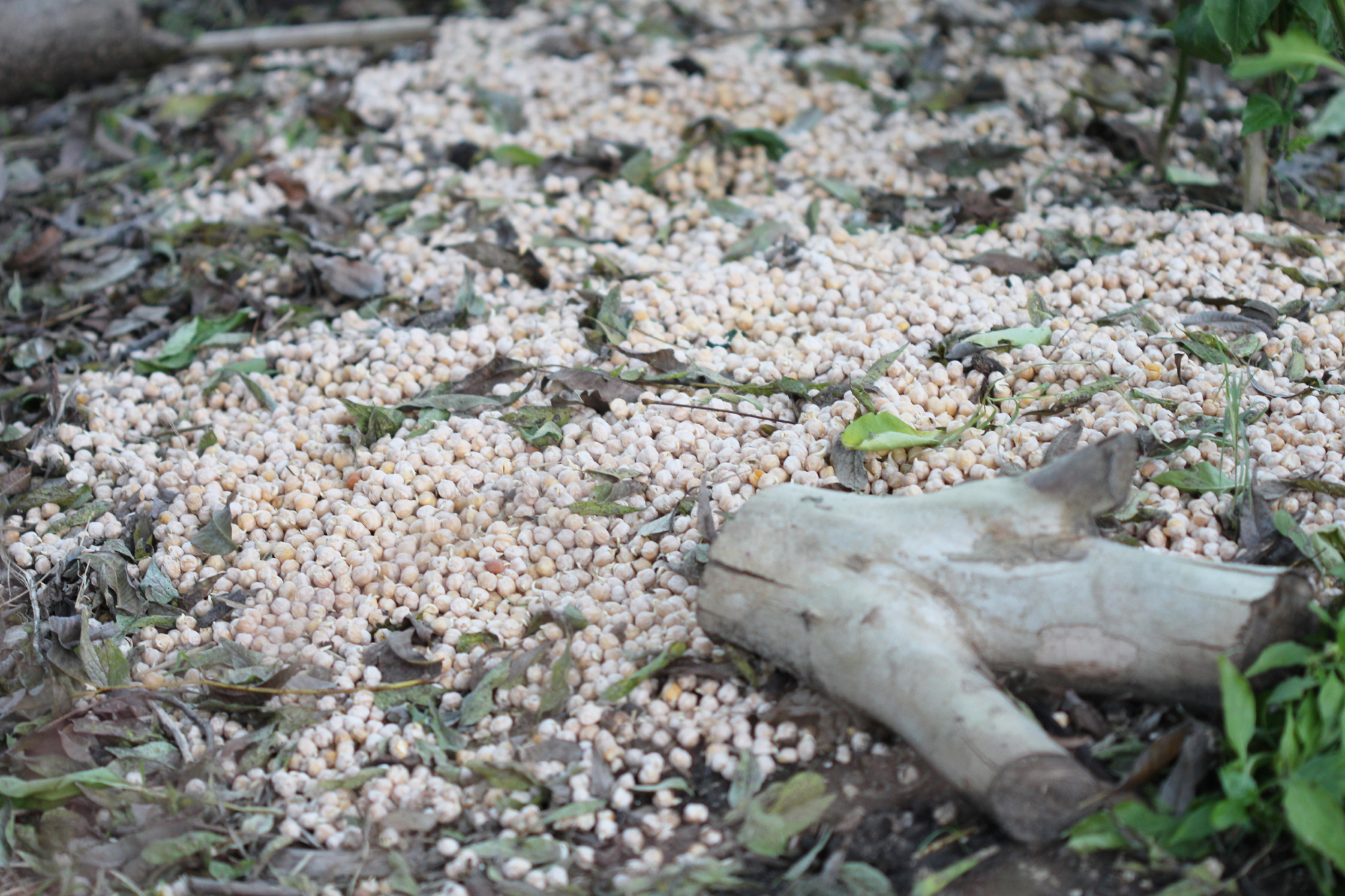 The Food is Free project gained popularity among neighbors who have continually donated fertilizers for the farm to use. There are other microfarms in the Austin area, including one run by University of Texas students. (Credit: Lingnan Ellen Chen) 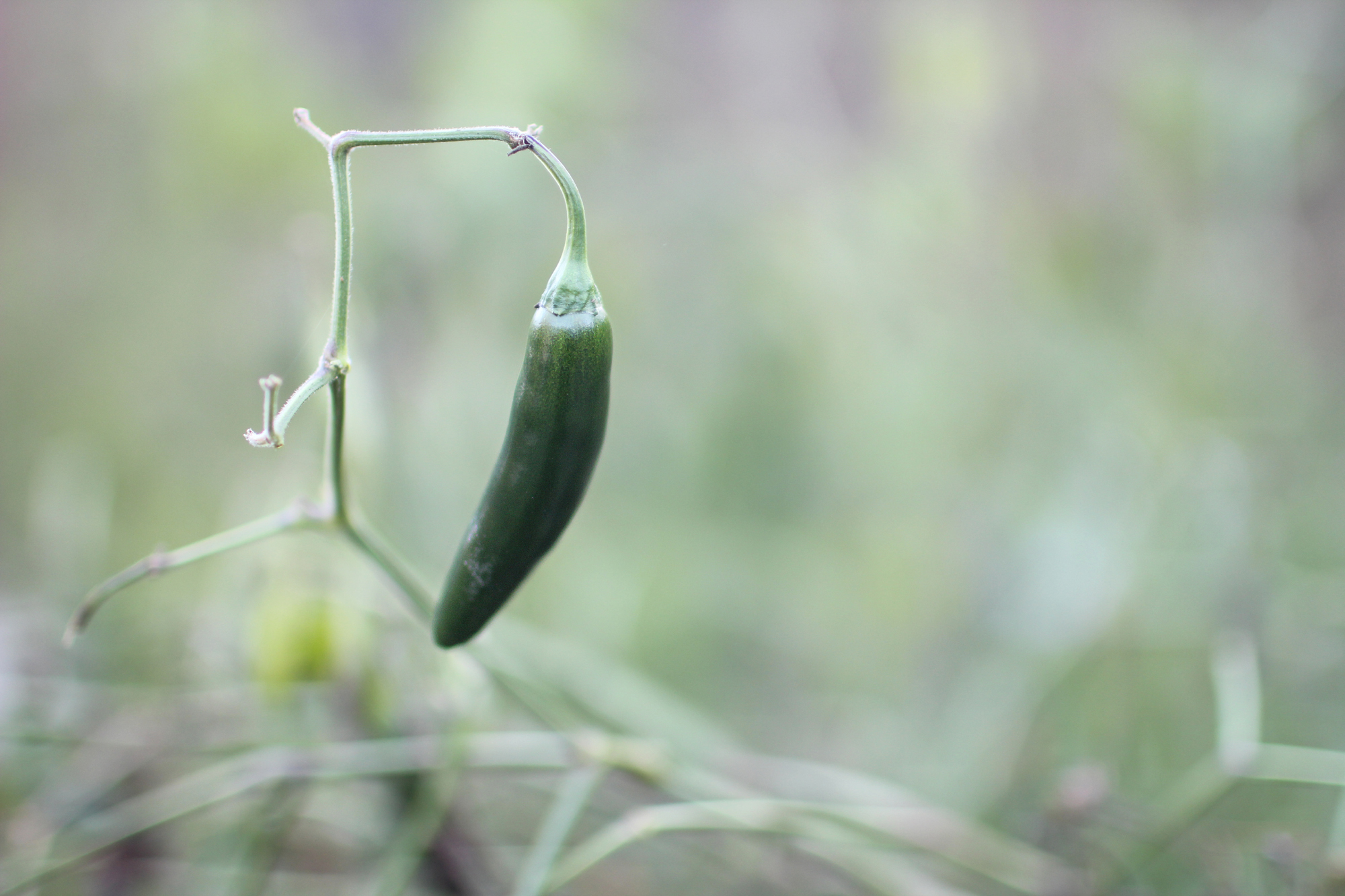 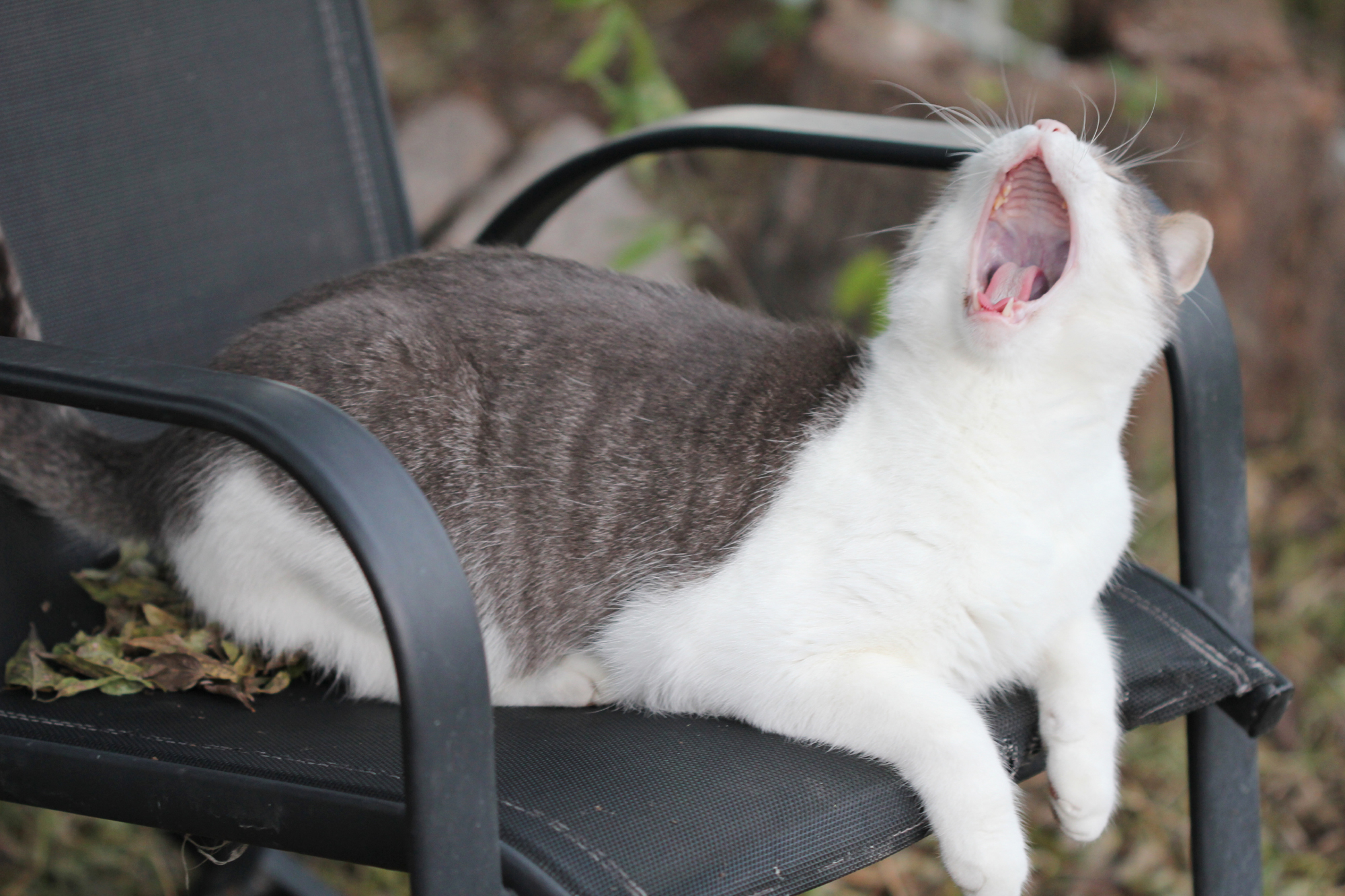 The farm’s pet cat Max yawns in the yard. Those who work on the farm also live on the land. (Credit: Lingnan Ellen Chen) 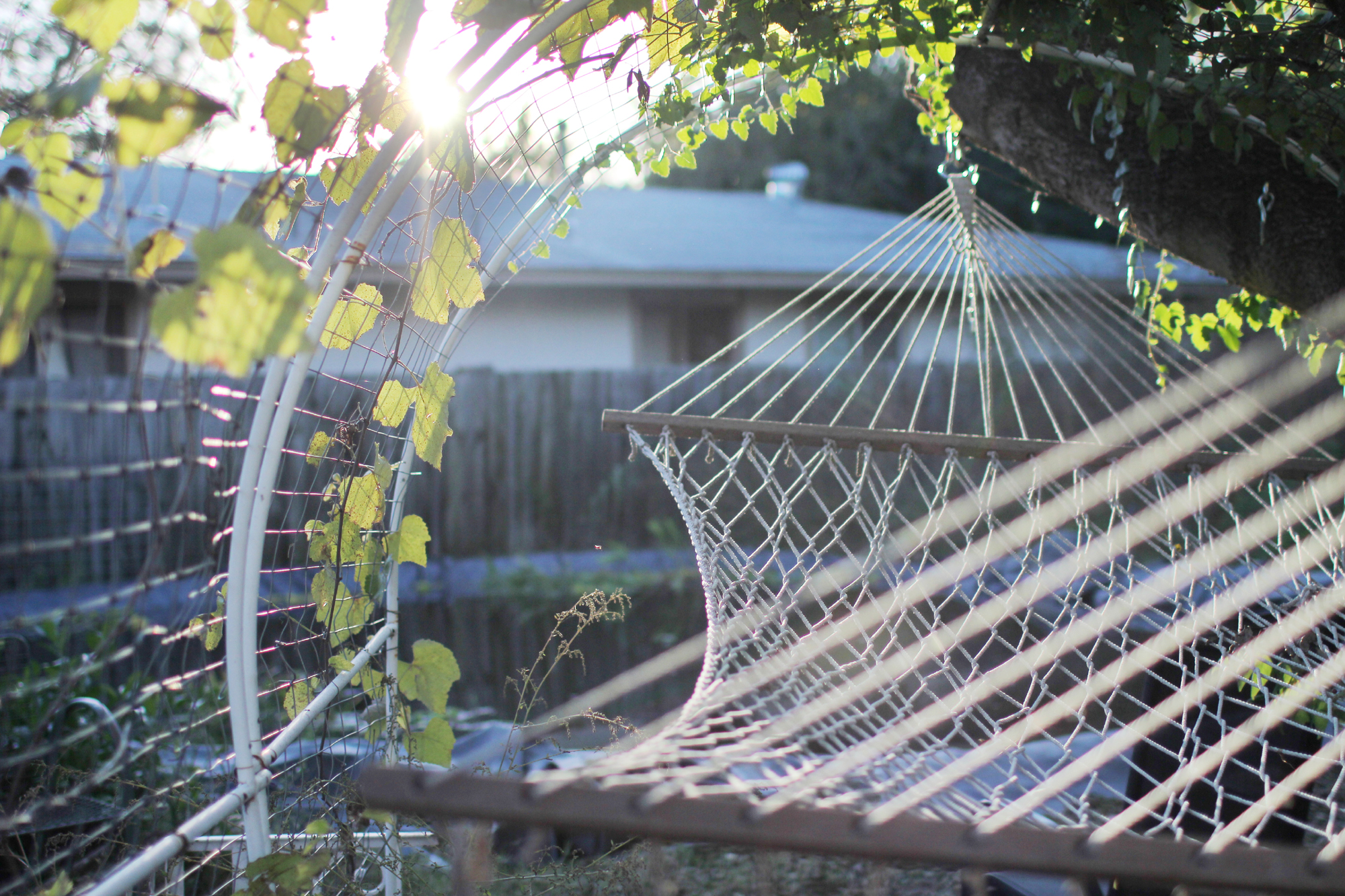 A hammock hangs on the farm. (Credit: Lingnan Ellen Chen) 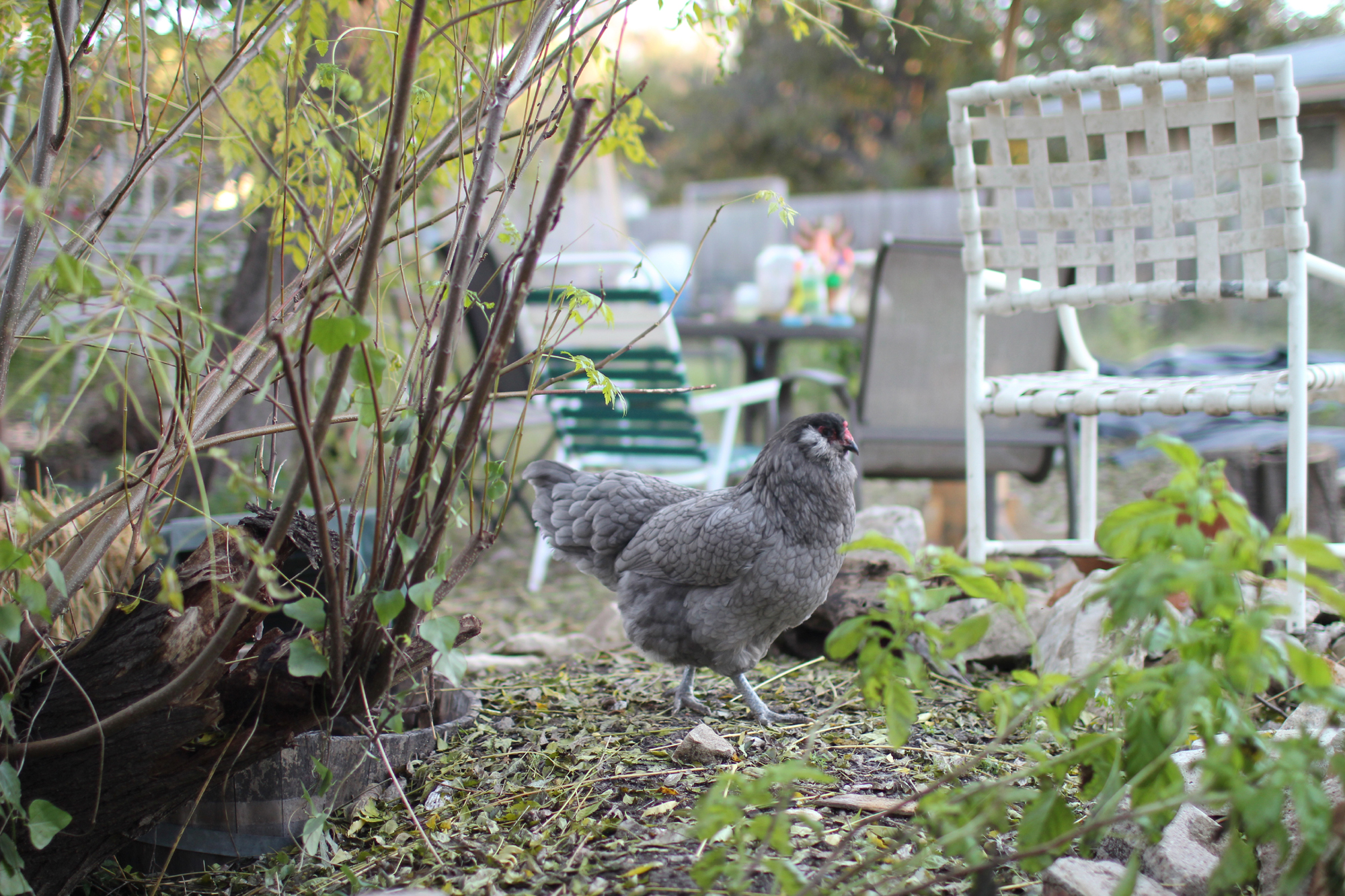 The farm feeds hens that they will donate to local farms before they move to Arkansas. The hens are also not to be eaten, but used as food composers. (Credit: Lingnan Ellen Chen) 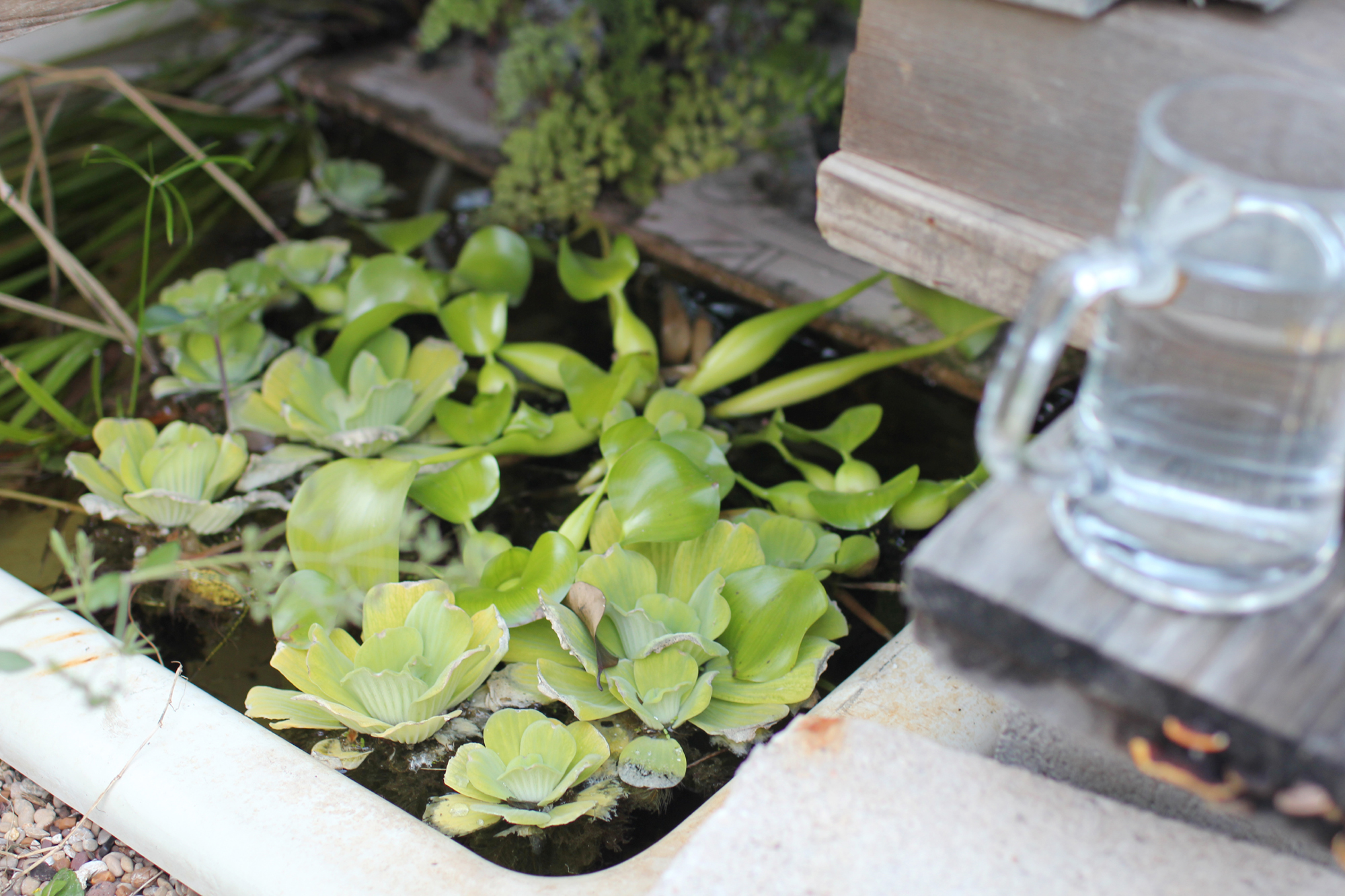 The farm utilizes wastewater from fishponds to grow plants. They focus on growing organic foods for the local community. (Credit: Lingnan Ellen Chen) 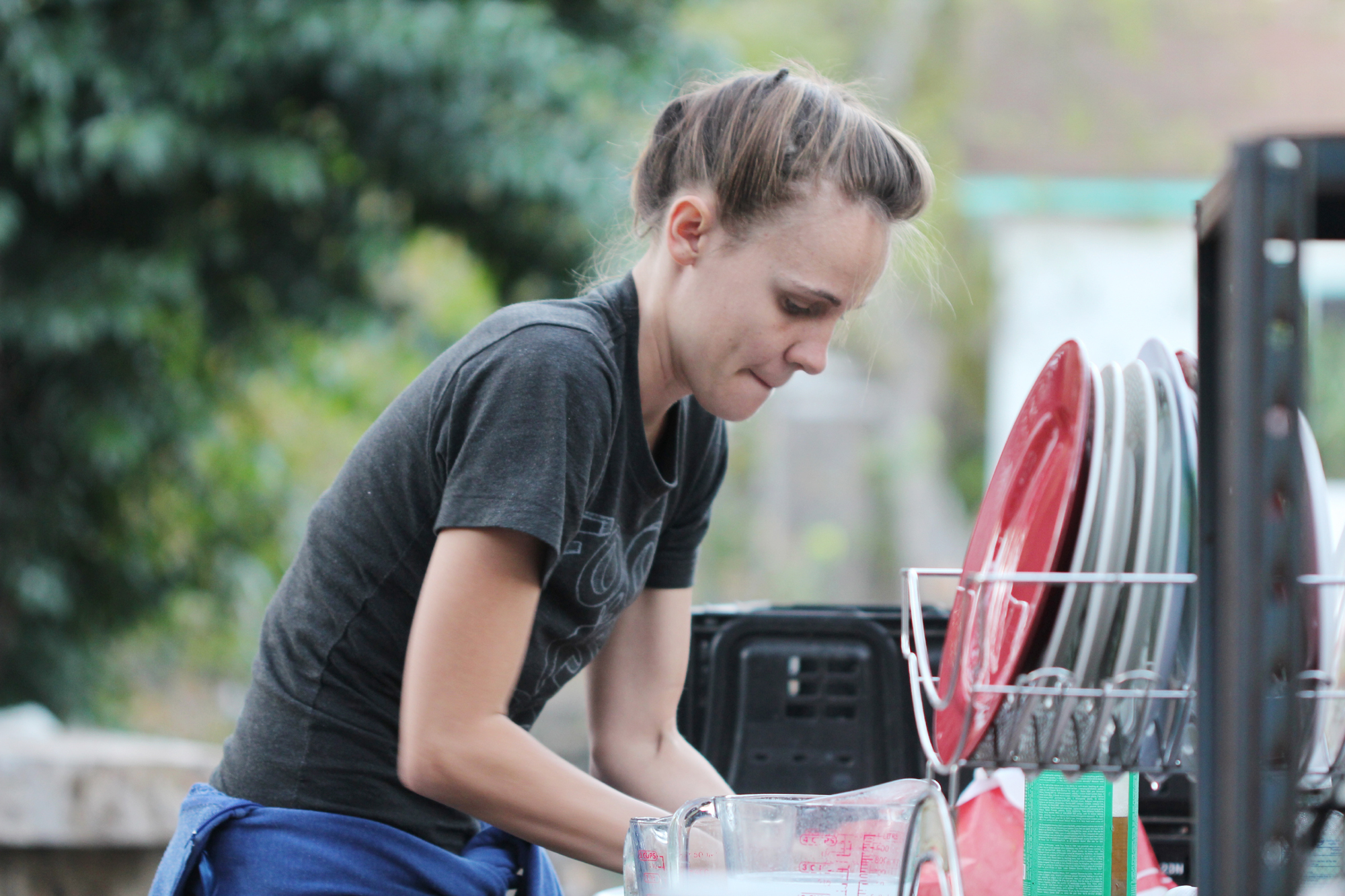 Stacey K. Volland washes dishes in the open kitchen in the farm. Volland and her partner John V. Edwards live on the farm in north Austin. (Credit: Lingnan Ellen Chen) 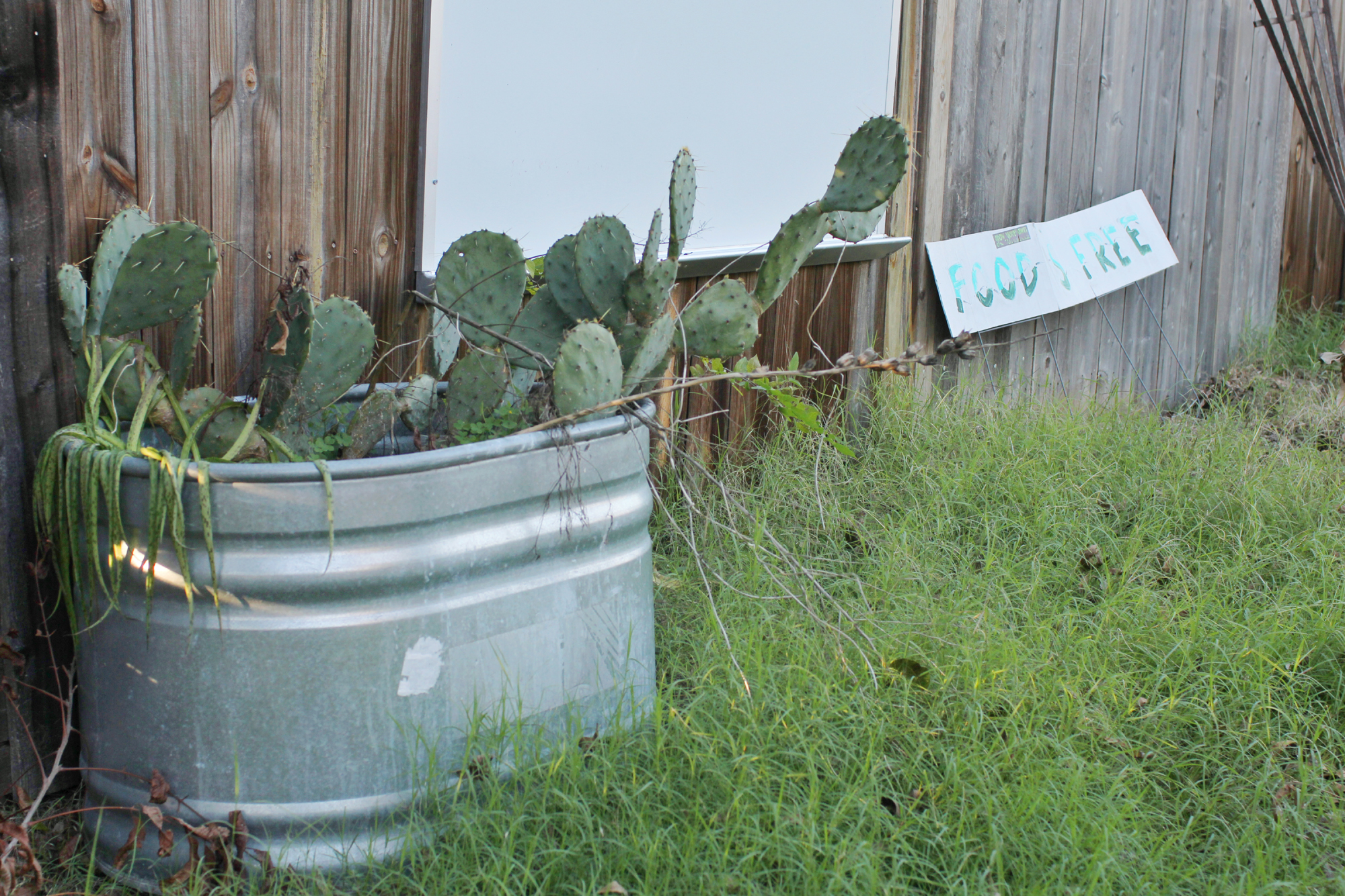 The Food is Free project suggests neighbors plant “little gardens” in front of their yard. Some Food is Free farmers start in their apartments. (Credit: Lingnan Ellen Chen) 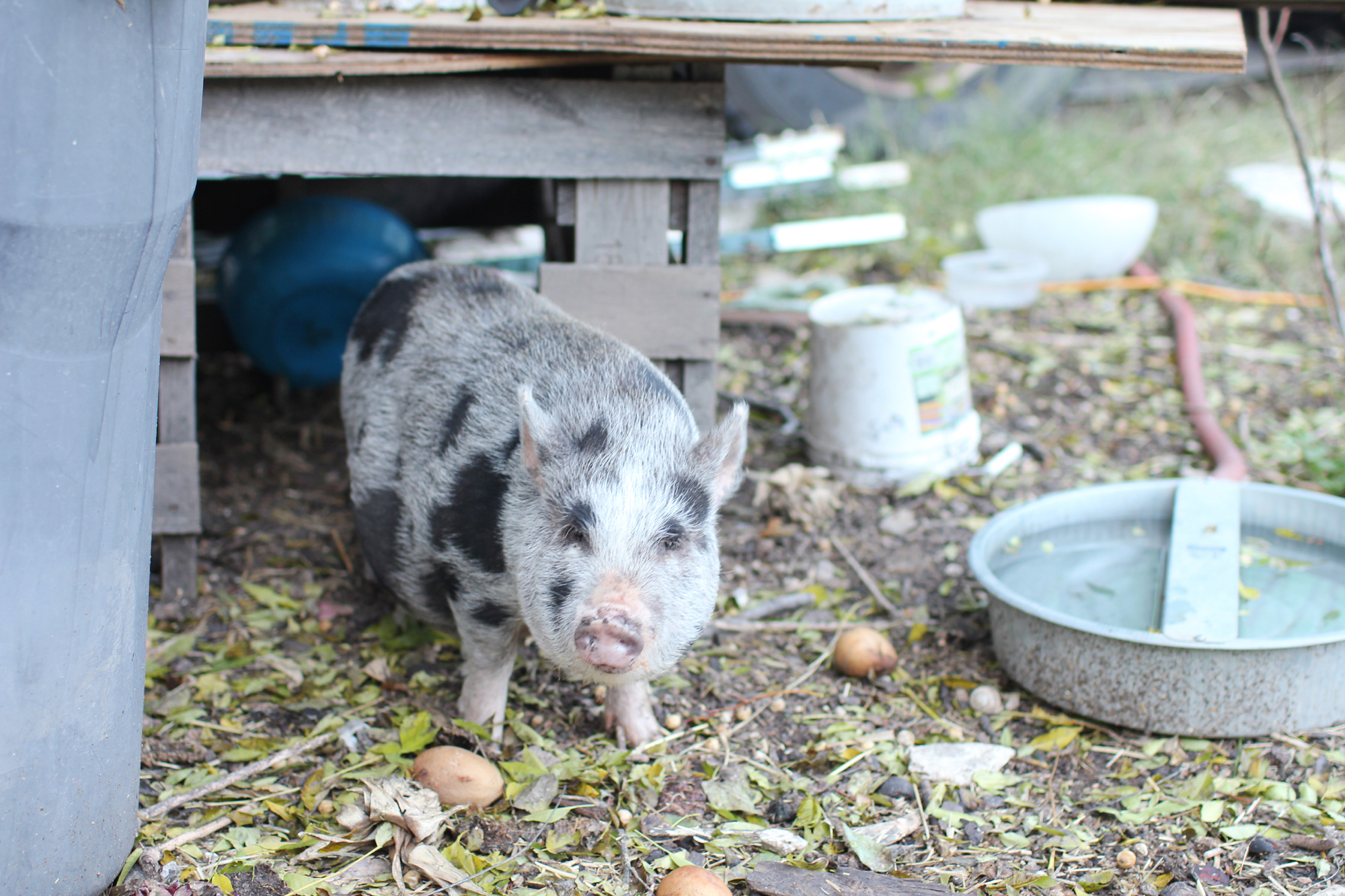 The other pet pig Madeline wanders in the farm. The pigs will be making the trip to Arkansas with the farmers. (Credit: Lingnan Ellen Chen)

The campaign was not as successful as Edwards had hoped.

But as concerns were growing at Food is Free, a new benefactor stepped into the picture.

A landowner offered to provide Food is Free with a new space for the headquarters. The individual, whose identity has not been revealed, had been looking for a group to develop the land into a space that could be developed and used for teaching about environmentally friendly practices such as gardening.

The only catch was the location: Fayetteville, Arkansas, far removed from the city of Austin where the project had originated. But that wasn’t going to stop Edwards and his team.

“It almost seemed destined. It was really amazing,” Edwards said.

And while it would mean leaving Austin, Food is Free has already expanded beyond the city’s boundaries. Close to 200 cities have established gardens through the project’s outreach. Those cities cover 26 countries, including Egypt, New Zealand, Thailand and Tunisia.

“That (the project) has already gone around the world and back again proves that it’s an idea that resonates with so many,” Edwards said.

Note: Markers are not exact locations of farms.

Food is Free has been able to expand in such a way largely on the strength of the universality of its message.

“So many people today are living paycheck to paycheck, working jobs that they hate, and they feel trapped,” Edwards said. “If food, water and shelter are met then all of a sudden so many of our problems go away.”

It’s a message that has attracted support not only from communities like the one that sprung up around Food is Free in Austin, but also from those with a strong platform for spreading it.

Comedian Reggie Watts offered his support to the project, calling communal gardens “an essential part of a growing and aspiring community.”

That the city of Austin no longer has room for such a thing might speak to where it is headed in the wake of so much growth.

Ranked by Forbes as the fastest-growing city of the year, Austin boasts a low unemployment rate of less than 5%, a rate lower than the percentage by which the local economy grew last year. With tech giants such as Apple and Dell in the area, and new entrants such as Dropbox continuing to arrive, these numbers shouldn’t come as a surprise.

But they do hide the fact that smaller organizations like Food is Free, which have in large part helped to establish Austin’s modern identity, are feeling the pressure.