By Lauren Lowe and Colleen Nelson

Every year around Valentine’s Day, the same question is asked by men everywhere: Flowers or chocolate? In search of an answer, we asked a local flower shop and a local chocolatier to give their reasons for preferring one over the other.

Among the several vendors participating in the Valentine’s Pop Up market at the West Elm on West 5th St. Friday was Steve Lawrence, owner of The Chocolate Makers Studio.

“It’s kind of a one-person operation,” Lawrence said. “I use Belgian chocolate, French chocolate and Venezuelan chocolate. I blend the three according to flavor profiles I want to achieve.”

Valentine’s Day is an important one for the chocolatier; he ramps up production about a month in advance. He finds that his truffles are more popular than his bars during holidays and the most popular flavors are salted caramel and salted brown butter Texas pecan brittle. Lawrence has a personal favorite as well.

“Which of my children do I love the best? Salted caramel is kind of the original baby, so it’s pretty hard to go wrong with that one,” Lawrence said.

Lawrence holds the opinion that chocolates are a better gift for Valentine’s Day than flowers because they are portable, they can be shared or they can be enjoyed alone. He argues that chocolates can be just as unique as wine depending on where the chocolate was grown and how it was processed.

“You can grow your own flowers,” Lawrence said. “And there’s just something about a thing you can eat.”

AUSTIN—The vessel that runs through the heart of the city known as Guadalupe Street, or as many say the Drag, has been a staple to the University of Texas. The street that lies parallel to UT is lined with restaurants and shops, both local and corporate. Many of these local shops have called the Drag home since their establishment and have resided next to bigger businesses, until now.

The store Manju’s at 2424 Guadalupe St., popular for women’s apparel and accessories, will finally close it’s doors at the end of this month after 37 years of residency on the drag. This isn’t because the game day favorite is going out of business, but instead being pushed out by a competitor.

Manju’s owner Kavida declined an interview but briefly said that closing her business is not of her choosing.

A few doors down at 2406 Guadalupe the Pennsylvania based retail giant Urban Outfitters is housed. The two story establishment that sells both men’s and women’s apparel, as well as house décor, records, books and other miscellaneous gifts, has plans to expand their franchise on the drag.

Chris Johnson the Development Assistance Center Manager in the City of Austin Planning & Development Review Department says that although Urban Outfitters has not directly announced an expansion, they have expressed interest.

“Urban Outfitters had a meeting with his Planning and Development Review team back in December about some options they were considering for the land,” Johnson said. “They discussed remodeling the existing buildings for new businesses or even building a multi-tenant development with an entertainment area that included a restaurant and bar on the floor level.”

Both partial and total demolition permits have been applied for the addresses that include Urban Outfitters, what were originally Pipe’s Plus, Texadelphia and Longhorn Lux, and Manju’s. With the exception of Mellow Mushroom, BHF Guadalupe LLC owns all of the addresses on the same strip as Urban Outfitters.

The Washoe Company based of out Luling, Texas owns Mellow Mushroom. The pizza-based restaurant’s lease will end later this year, but there is no word on either a renewal or sale of the property.

Of the addresses owned by BHF Guadalupe LLC, the only address that will remain intact is Chase Bank. Despite being able to stay at their drag location, representatives at the bank say that their parking in the back of the address has been purchased and they will soon have to park elsewhere.

Most recently on January 20th, the 2424 partial demolition permit application was submitted for a remodel to accommodate an Urban Outfitters MEN store at what currently is the Manju’s location.

Urban Outfitters has declined to comment on any purchases, renovations, additions and permit proposals they have made.

This isn’t the first instance of a major corporation buying out small businesses to add or expand their brand. In just the last year 7-11, ATT&T have moved into the drag taking over what once were local shops like the Co-Op Market.

Student’s that that regularly shop on the drag say that part of what keeps Austin weird is having these local shops that cater to the personality of the city.

“These small businesses make up what Austin is and what America is,” UT student Sahare Wazirali said. “I think as long as local business have an equal opportunity for advancement, then I think it’s fair. But what ends up happening is that bigger corporations end up making more money and they have more power and money to do these things. [Buy out small businesses]”

An official date for construction to begin on any of these properties has yet to be announced.

Compare images from the Drag in 2009

Landmarks unveils most daring sculpture yet 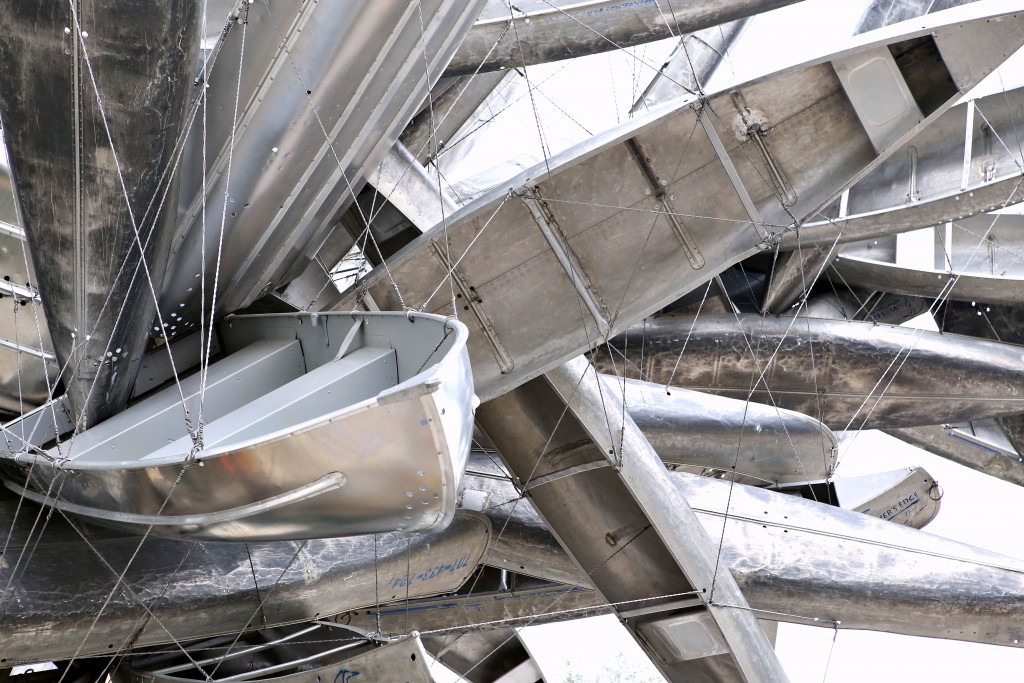 AUSTIN – As students flooded back to the 40 acres for Spring semester many were shocked to see over 70 small boats and canoes on campus. This was no prank or mistake. In fact, it was very intentional. The boats made up a 50 ft structure that teeters over a busy campus intersection.

What is now known to many students as the “boat sculpture” is actually named Monochrome for Austin, and was designed by artist Nancy Rubins specifically for the UT campus. The structure is located at 24th Street and Speedway.

This project represents the first large-scale sculpture by a female artist for the UT Austin campus, according to Landmarks, the campus public art program.

The $1.4 million in funding for Monochrome for Austin came from capital improvement funds provided by the construction of the neighboring Norman Hackerman Building (NHB). Although students have been quick to assume, no tuition money went to fund this piece of public art.

Landmarks invites the public to attend the official unveiling of Monochrome for Austin on March 5 at 5:30 p.m. The celebration will take place at the Norman Hackerman Building where the sculpture now stands. A Q-and-A with Rubins will be followed by a celebratory reception on the NHB patio.

Landmarks projects are scattered throughout campus. The campus public art project launched in 2008 to “develop a cohesive collection of public art from a curatorial perspective.” The displays have beautified the campus ever since.

Monochrome for Austin simply contributes to a long list of unique campus art. 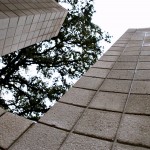 Sol LeWitt’s Circle with Towers was introduced to the UT campus in 2011 and stands at the entrance to the Gates Dell Complex on Speedway.

This piece of work can be enjoyed not only as an abstract art form, but also as a social gathering place. 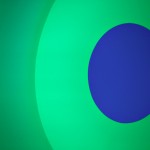 Located on top of the Student Activity Center a unique and little known piece of art invites students to participate by enjoying the peace and quiet.

James Turrell’s skyspace, The Color Inside, can be experienced throughout the day but Landmarks recommends sunrise and sunset. Pictures just can’t do it justice.

And That’s The Way It Is 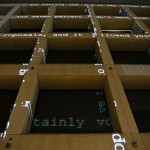 Located in the Walter Cronkite Plaza of the Moody College of Communication is another unique piece of art. And That’s The Way It Is by Ben Rubin was dedicated to Cronkite in 2012 when it was added to the UT campus.

This display features broadcast news text from the Cronkite era and modern day being projected in a grid on the communications building. This piece of artwork can be viewed every night on the UT campus. 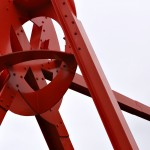 Introduced by artist Mark di Suvero to the UT campus in 2007, Clock Knot stands outside the chemical and mechanical engineering buildings.

The sculpture represents a giant clock face “knotted” in the middle. When moving around Clock Knot the views constantly change.

“Historically, a sculpture was an object to be looked at, usually on a pedestal, not something one viewed from underneath,” according to Landmarks.

However, by walking around this particular structure the viewers experience drastically changes. 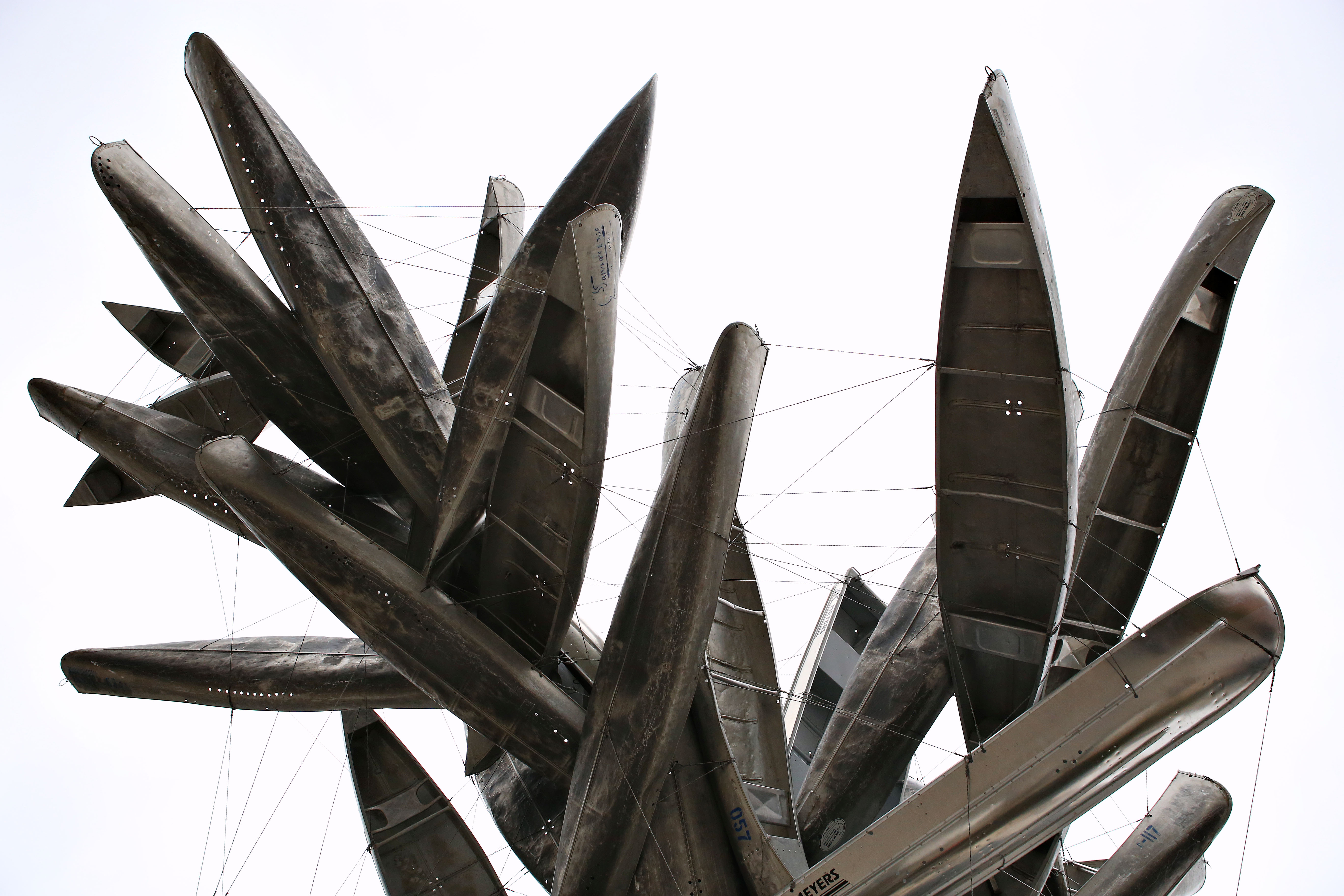 Nancy Rubin's is the first female artist to install a large scale piece on UT's campus. Her "Monochrome For Austin" consists of 70 metallic canoes wired together by steel cables. 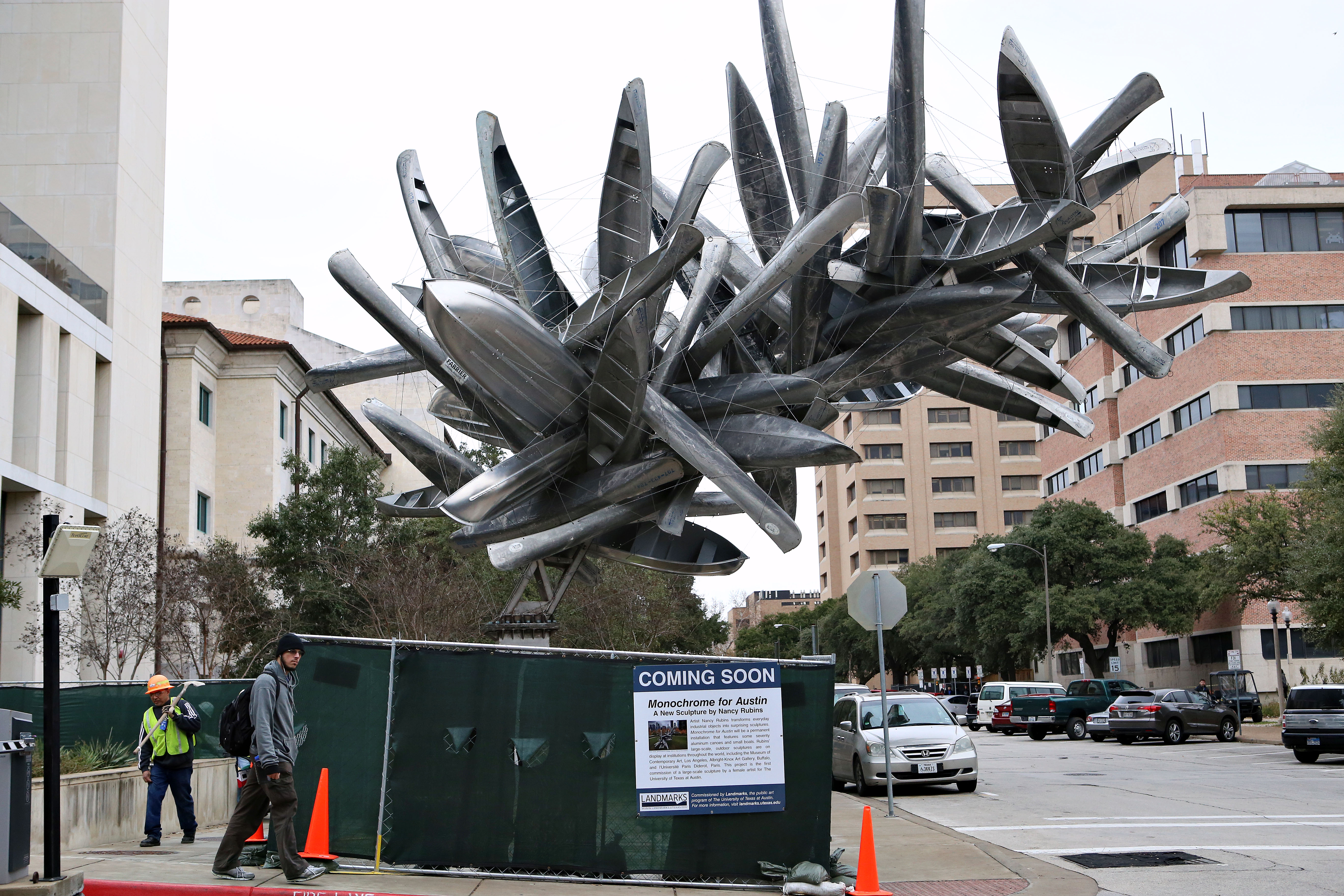 Nancy Rubin's "Monochrome For Austin" was installed over the winter break and completed in 3 weeks. 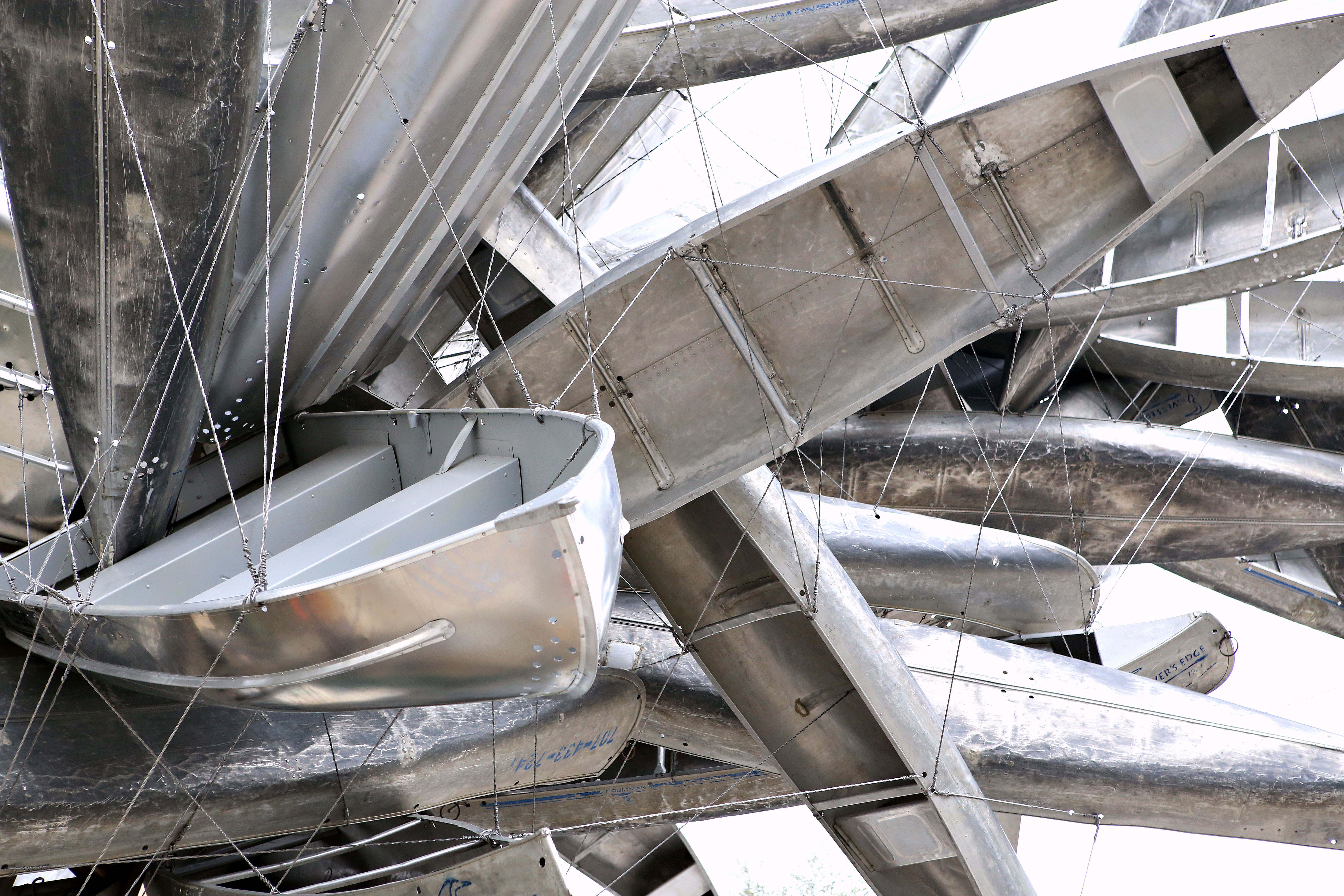 There is a subliminal association to warplanes in Rubin's work because some of the canoes were made by the Grumman Corporation, a military producer of the jet planes Rubin's has used in previous work. 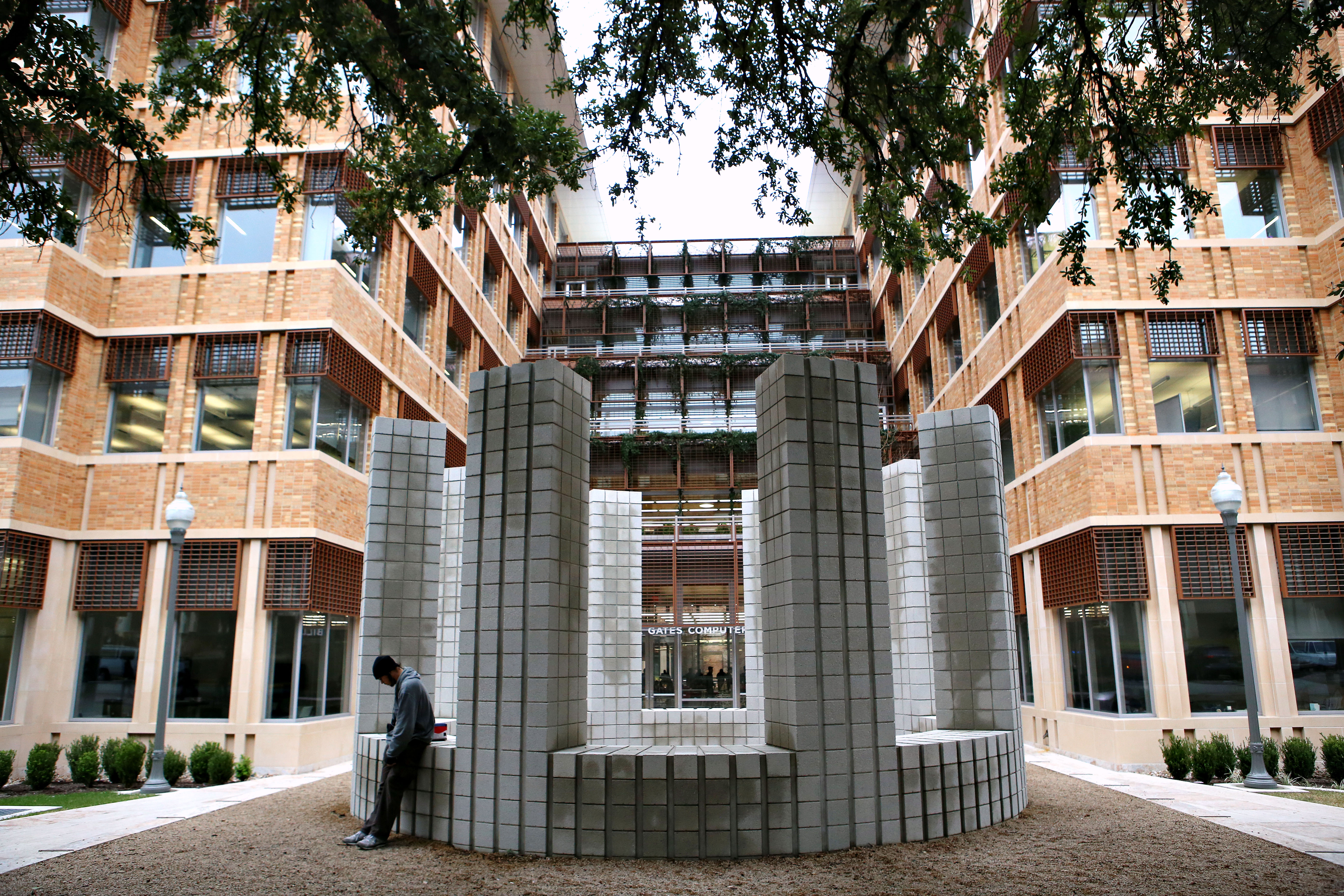 Sol LeWitt's "Circle with Towers" was created back in 2005 and purchased by UT in 2012 for the newly built Gates Computer Science complex. 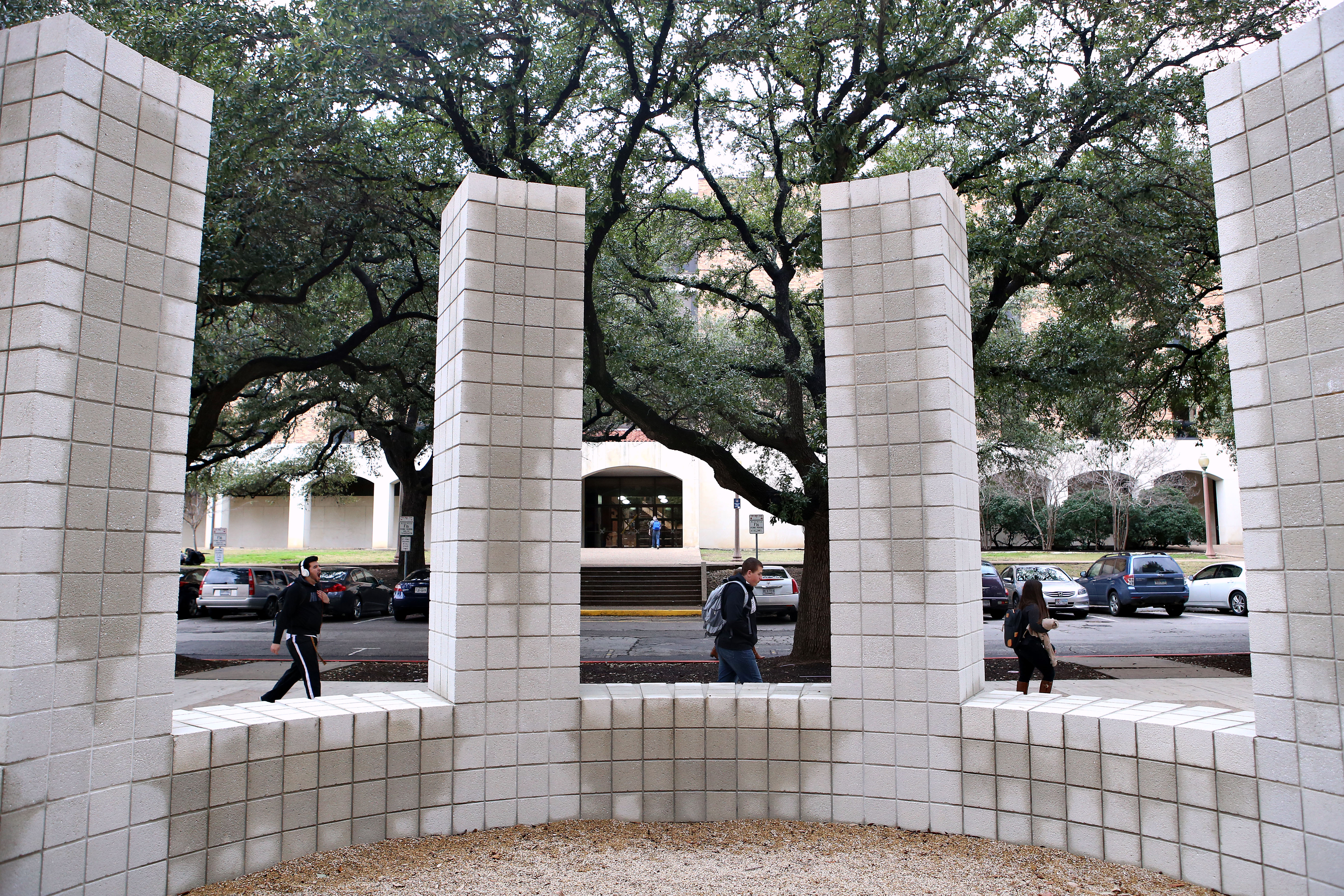 "Circle With Towers" is a low circular wall capped at regular intervals by eight rectangular towers made of pale gray concrete blocks stacked atop each other like a Rubik’s cube. 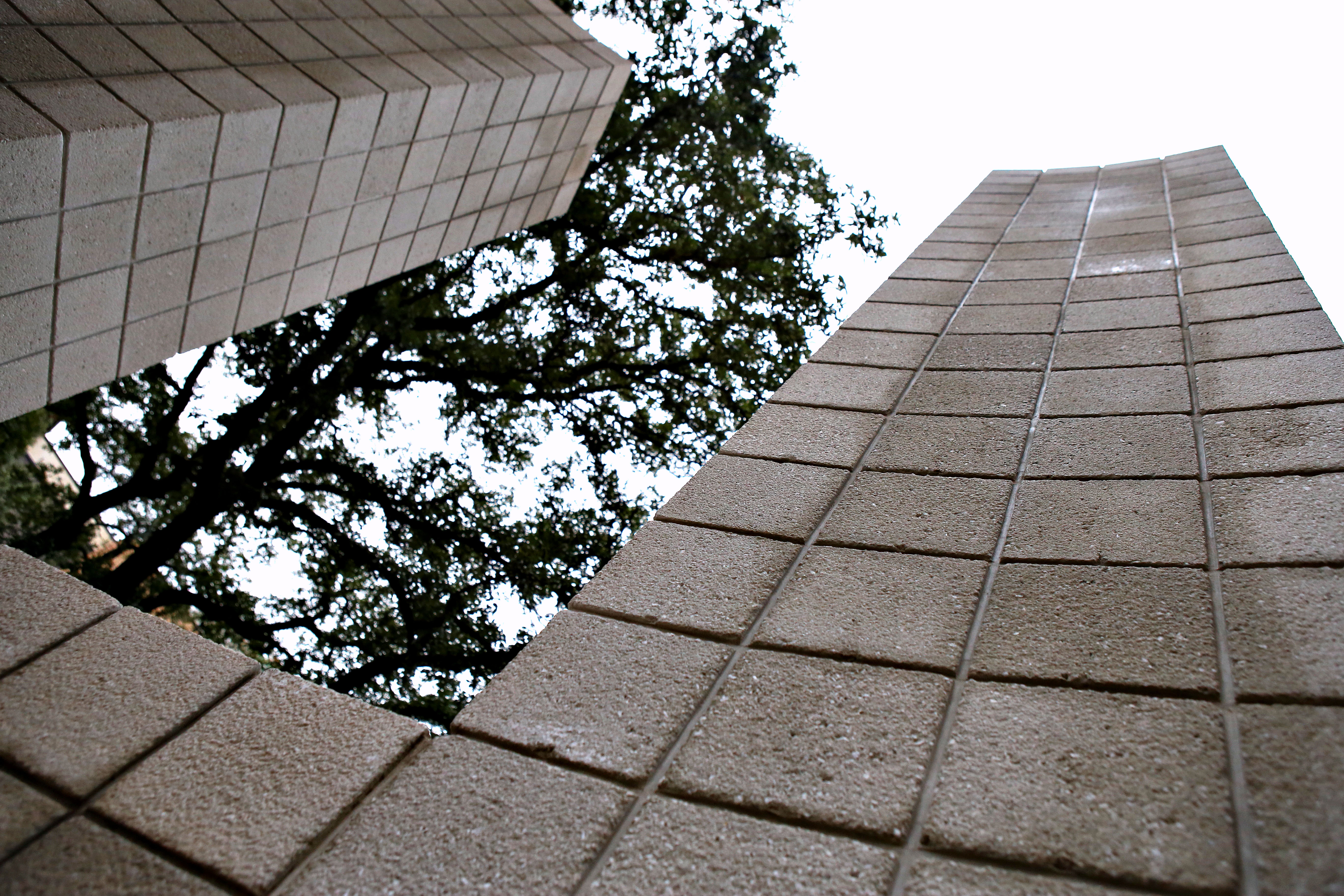 LeWitt introduced concrete block into his work in the 1980s. He liked the fact that rectangular blocks could be stacked on end so that the cube, or square, becomes a repeating motif. 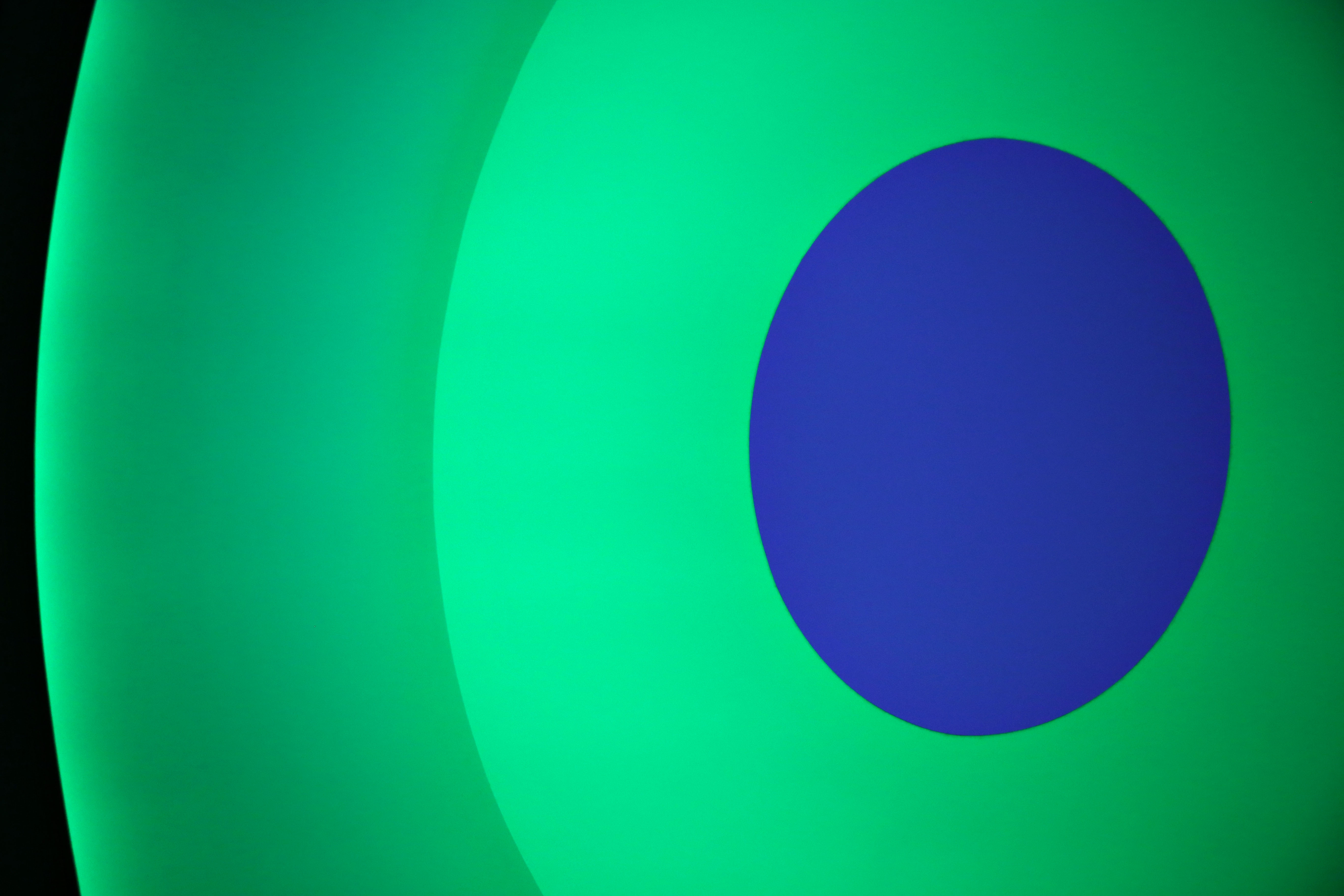 Turrell's "The Color Inside" was installed on the rooftop of the Student Activity Center in 2013. The skyspace comfortably fits 25 people and provides reservations for the hour showing that occurs every sunset. 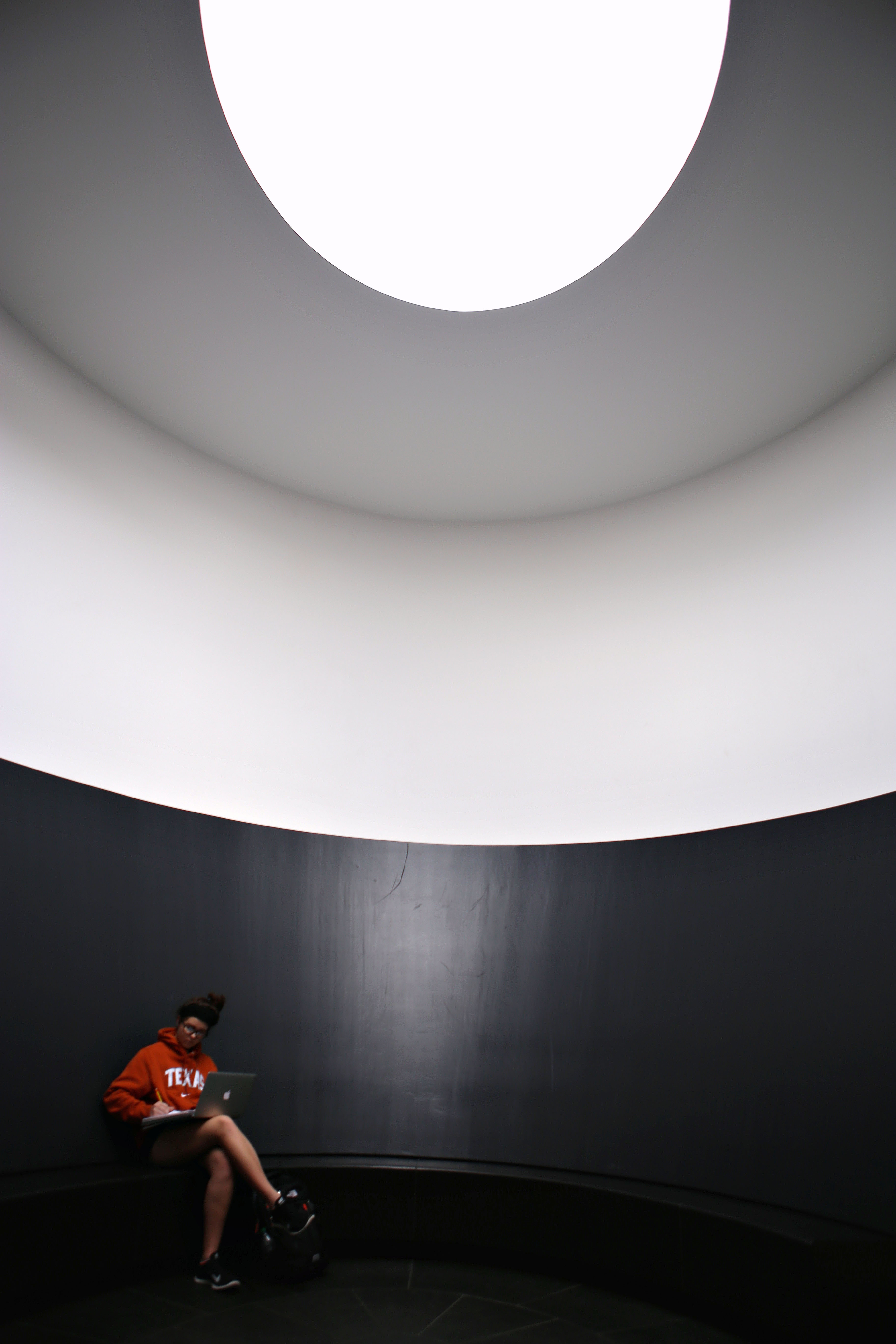 Art history freshman Amy Anderson studies inside of James Turrell's "The Color Inside." Students had wanted a quiet place to study and relax, which Turrell gladly provided. 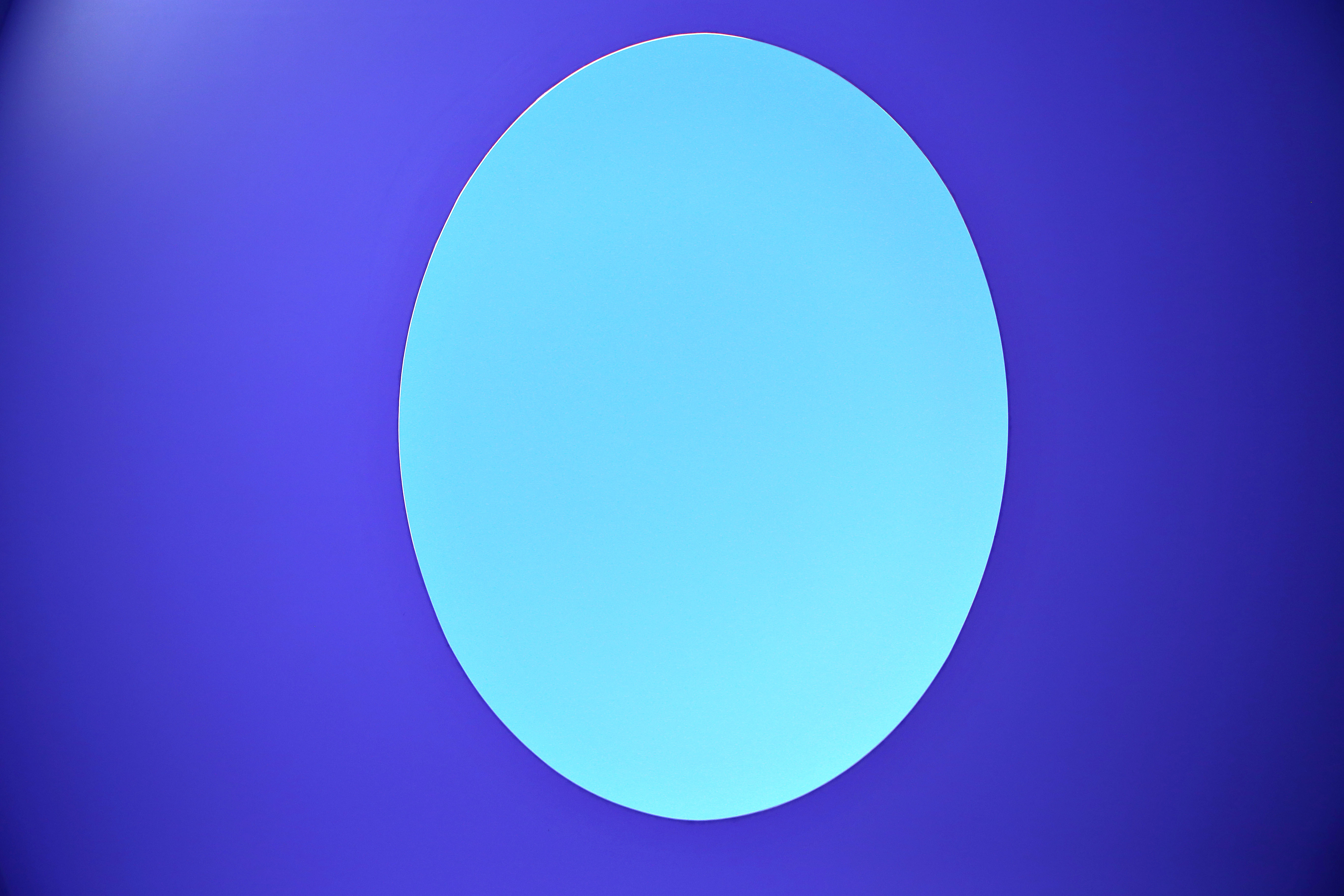 Turrell is known for making his skyspaces hard to find in order to increase the viewer's anticipation and enhance the overall experience of the work upon its discovery. The skyspace is open to visitors anytime during the day, as long as they can find it. 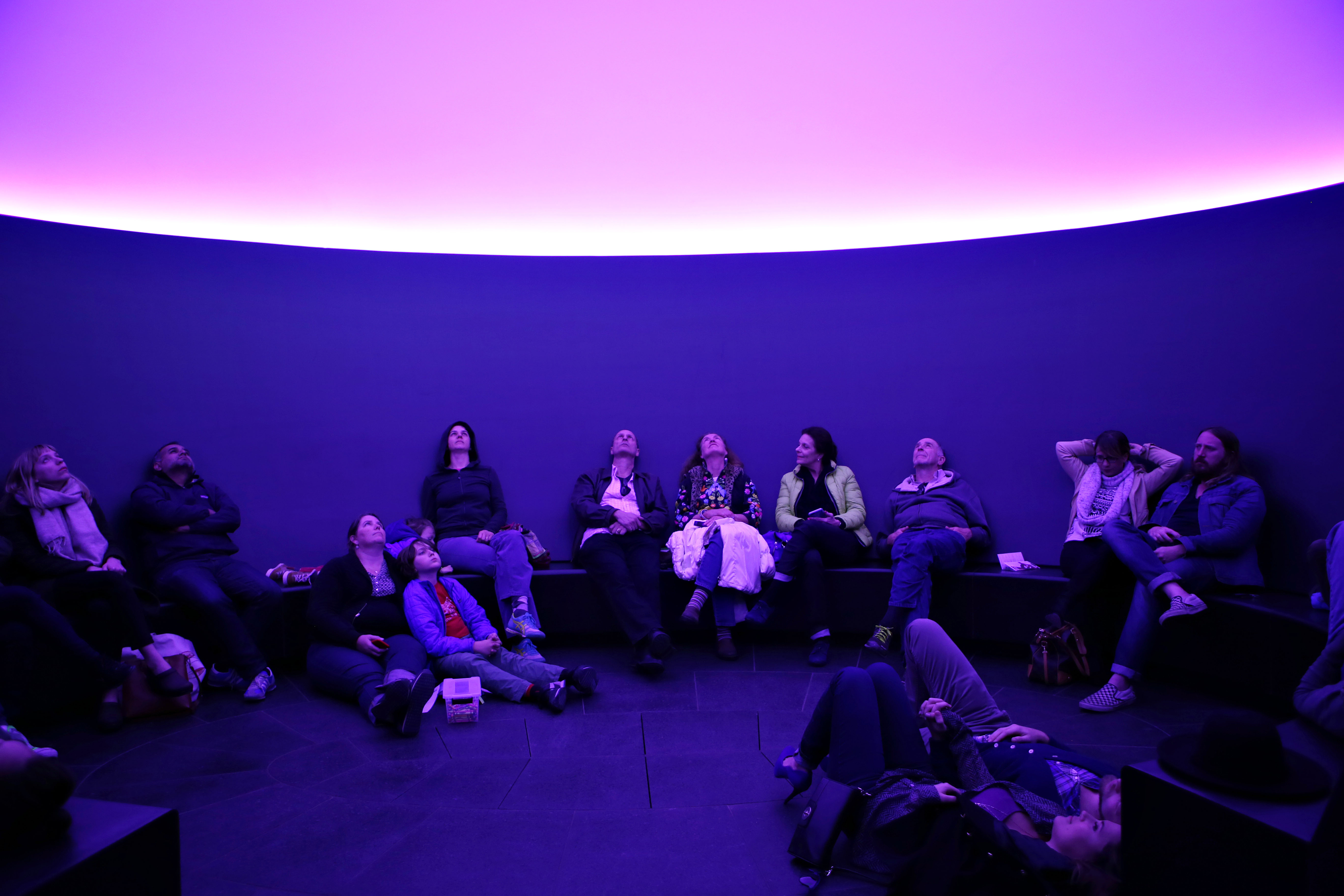 Turrell's color illusions are created by cutting a hole in the ceiling and adding some hidden LED lights along the rim of room. Specifically for "The Color Inside," he created an elliptical space with honed black basalt radiant heated seating and tiled flooring. 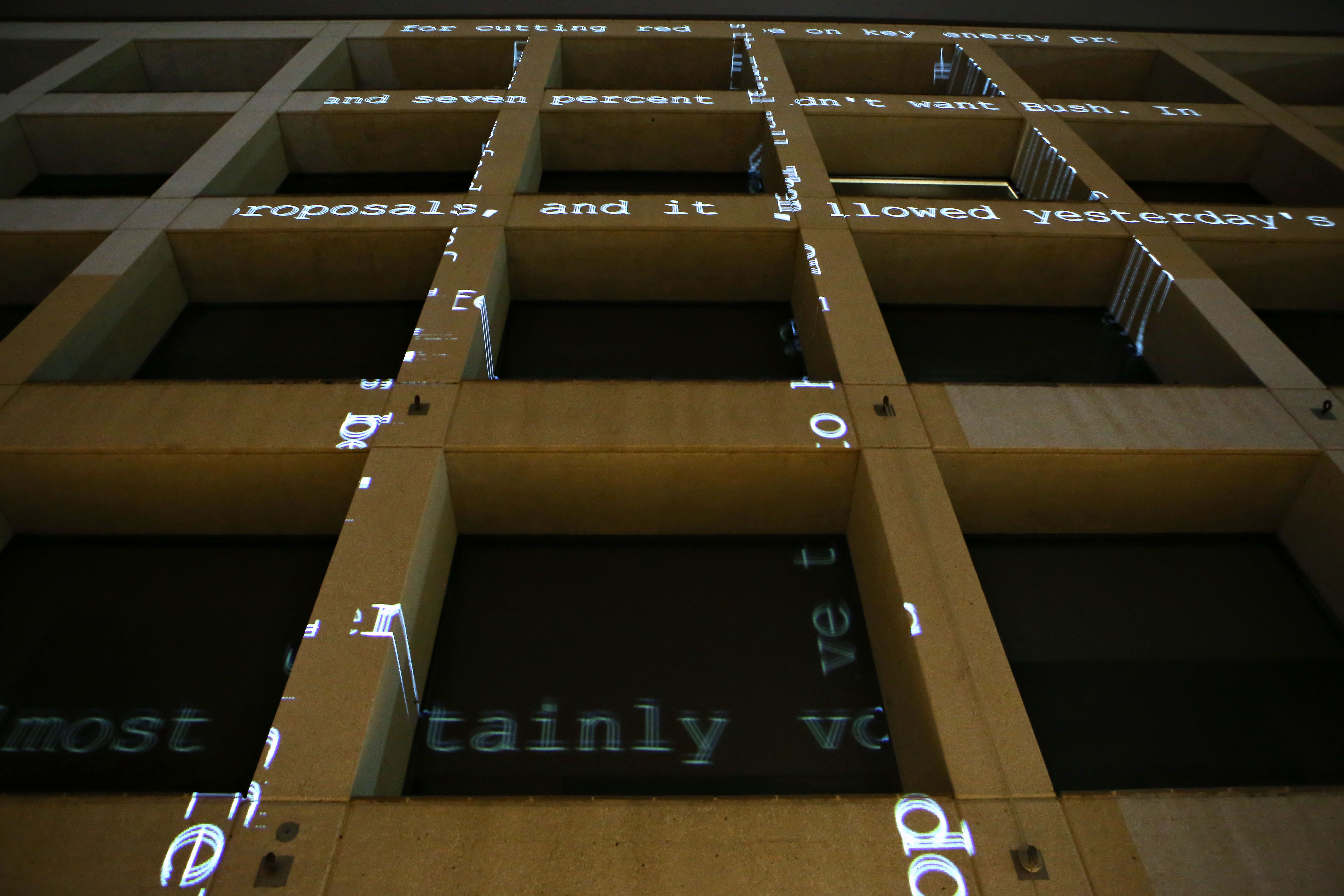 Ben Rubin's "And That’s The Way It Is" projects an interwoven grid of text from televised news broadcasts. 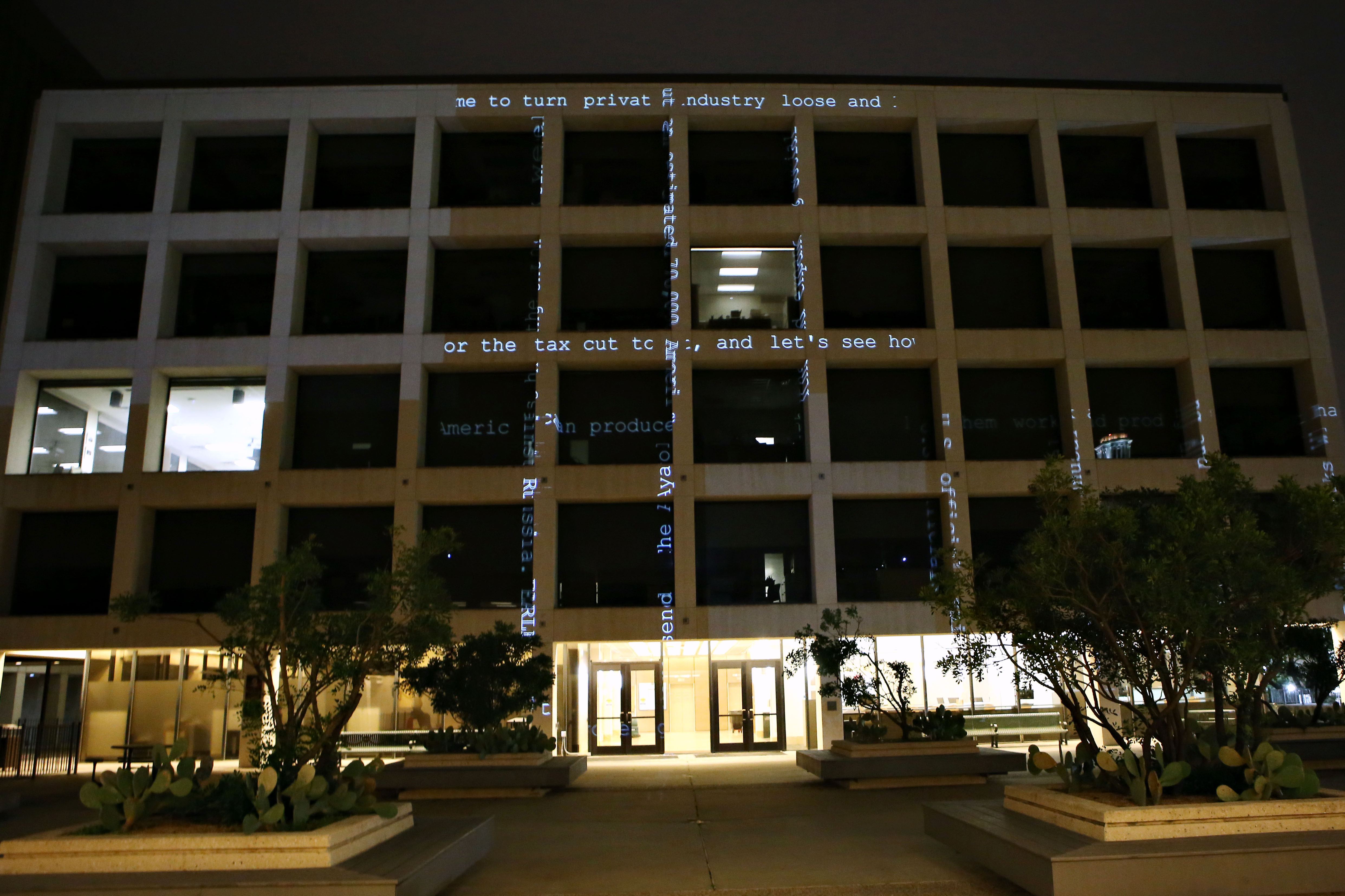 Rubin's "And That's The Way It Is" can be seen every evening in the Walter Cronkite Plaza. 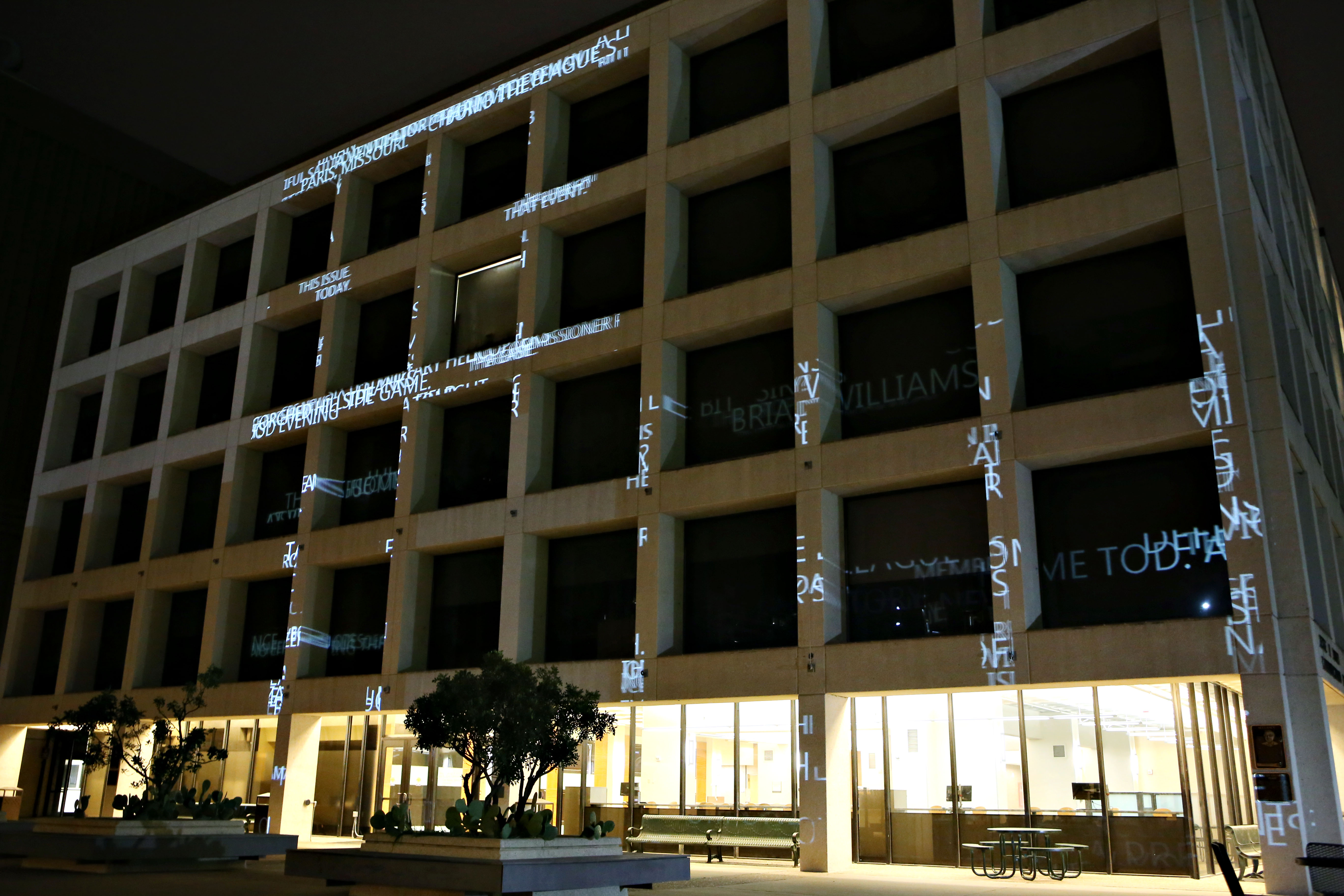 The content for "And That's The Way It Is" is acquired from two sources: closed caption transcripts of live network news and archival transcripts of CBS Evening News broadcasts during the Cronkite era, including those housed at the university’s Briscoe Center for American History. 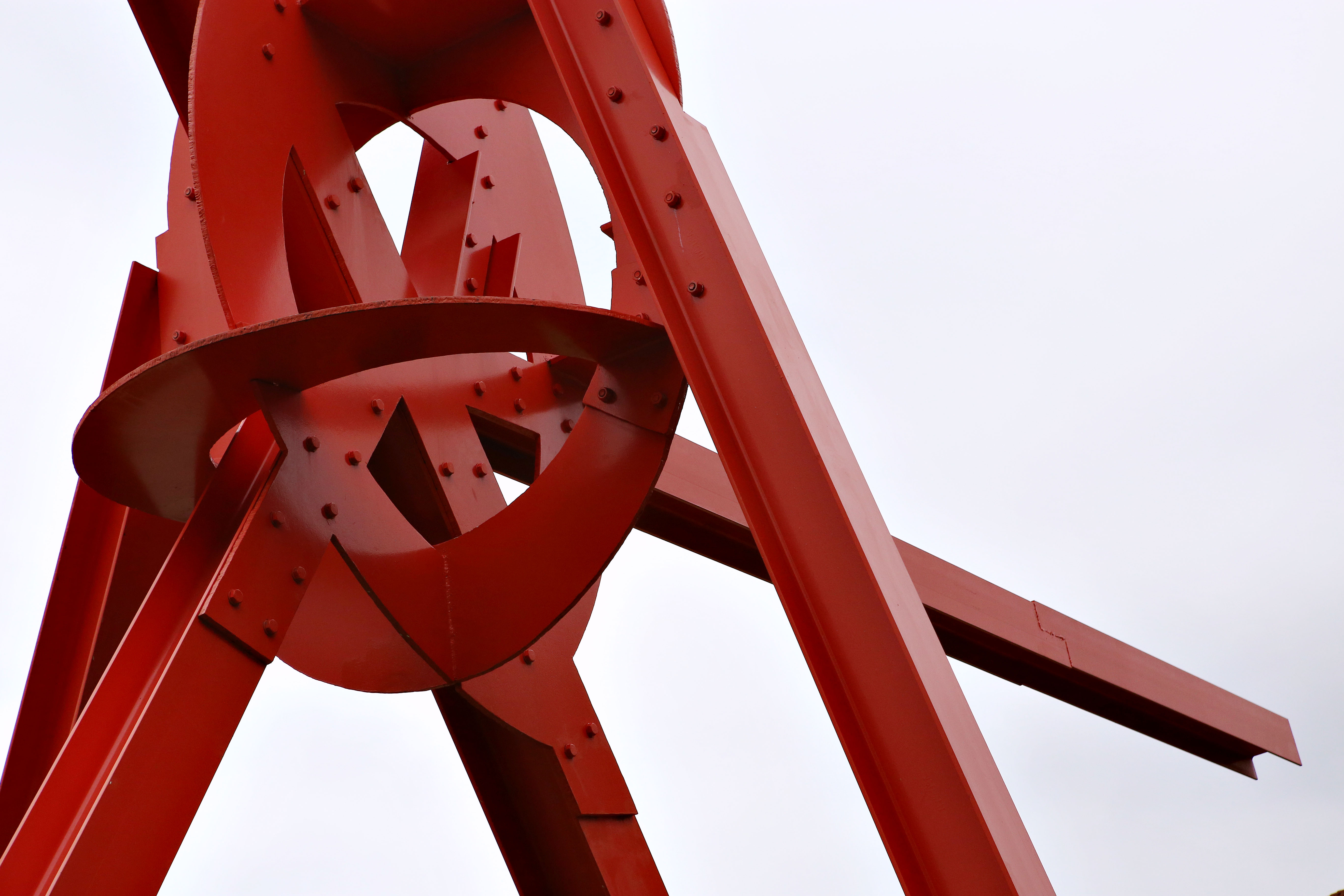 The title for the forty-one-foot "Clock Knot" was determined through a contest to name the work. A poet from New York suggested the winning title as he noticed the sculpture looked like a clock from certain vantage points, leaving the question, "Is it a clock or not/knot?" 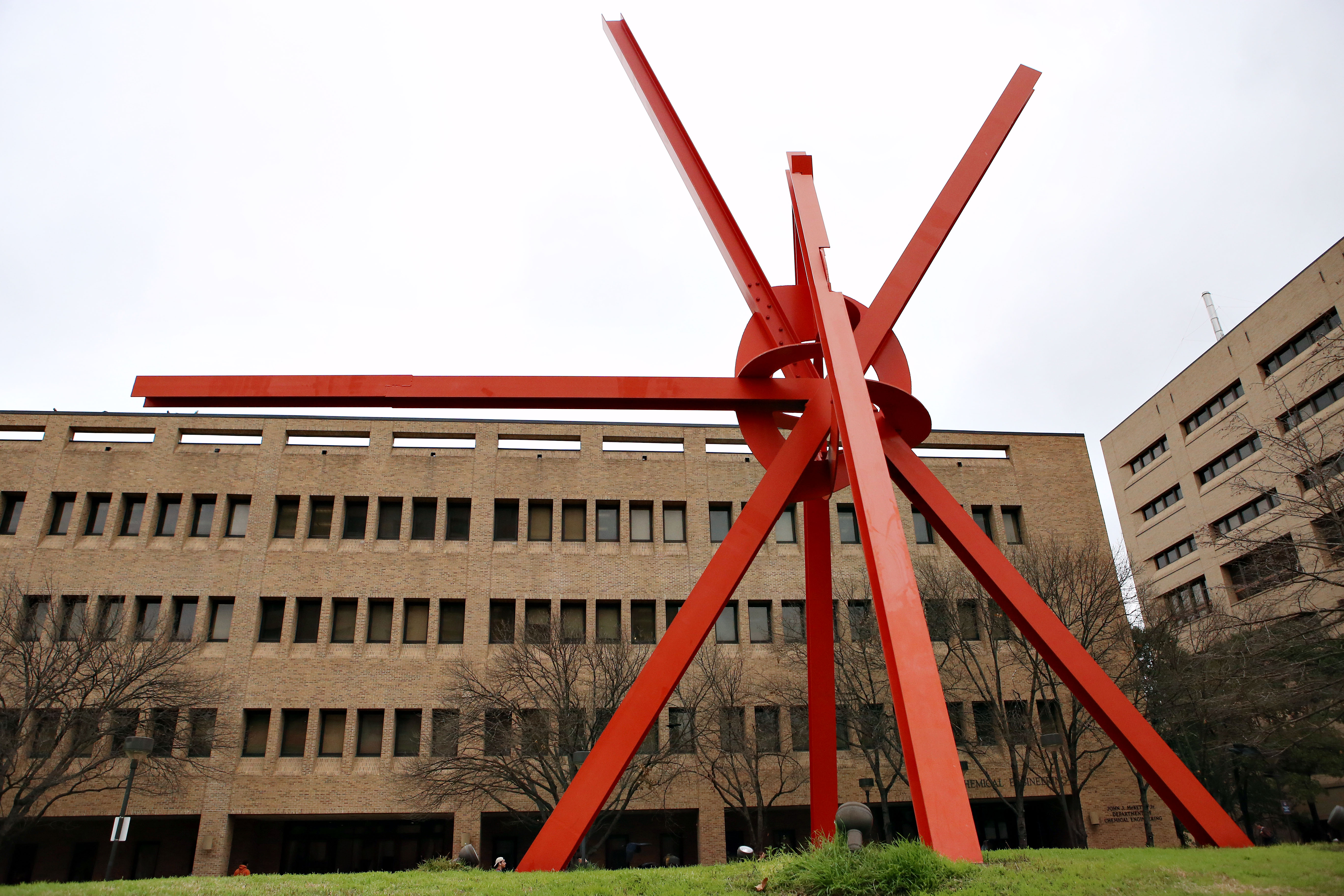 Mark di Suvero's "Clock Knot" was installed in 2007 on the lawn of the Mechanical and Chemical Engineering buildings. The piece demonstrates the principles of balance and force that apply equally in engineering. 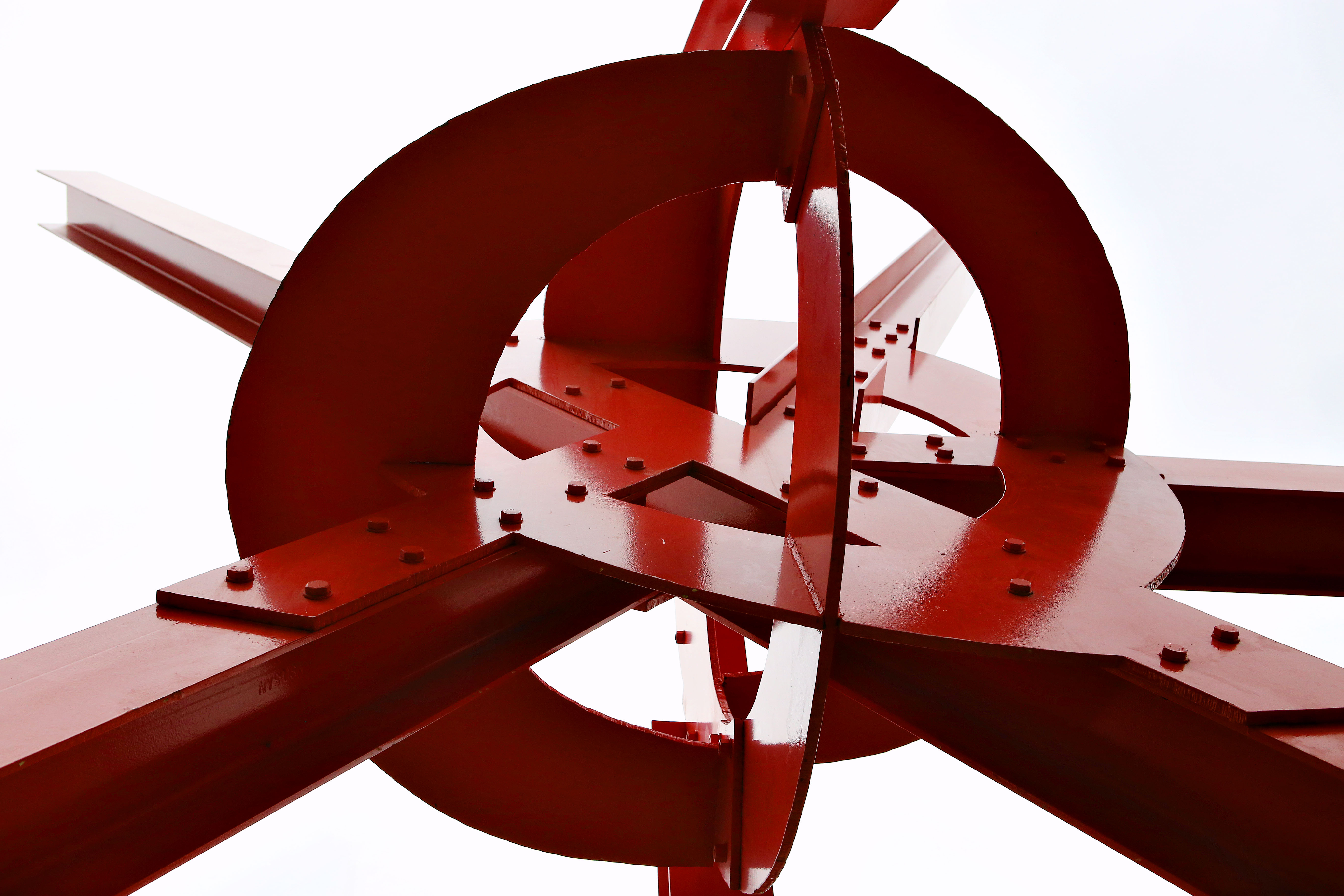 Walking around "Clock Knot" provides onlookers with different views and experiences, especially when moving underneath it. Historically, sculptures were objects to be observed usually on a pedestal, not something viewed from underneath. 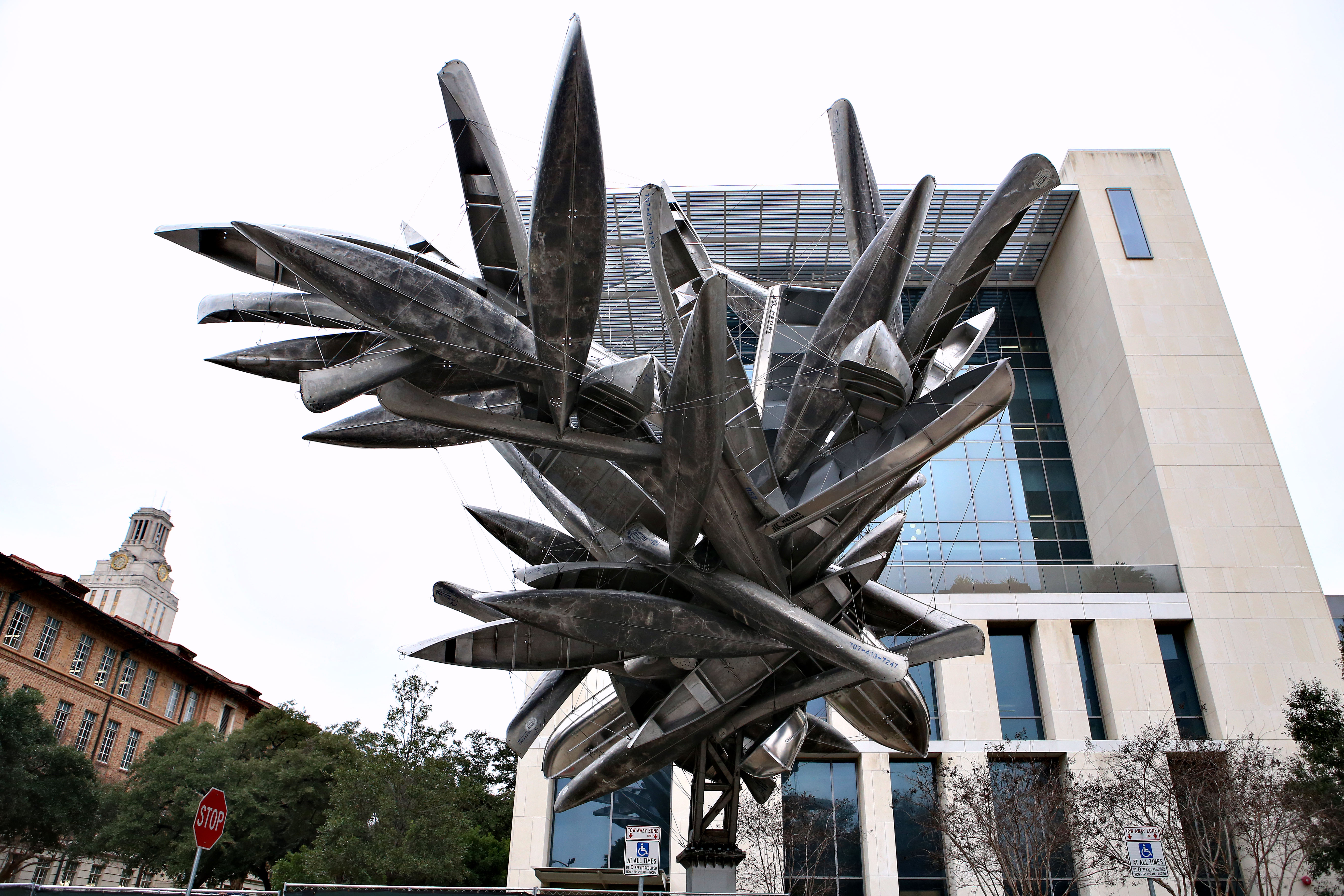 Rubin's "Monochrome For Austin" is the largest sculpture on UT's campus, setting the record at 50 feet.

Immigration activism heats up over the DREAM Act