Behind the Pink Gloves 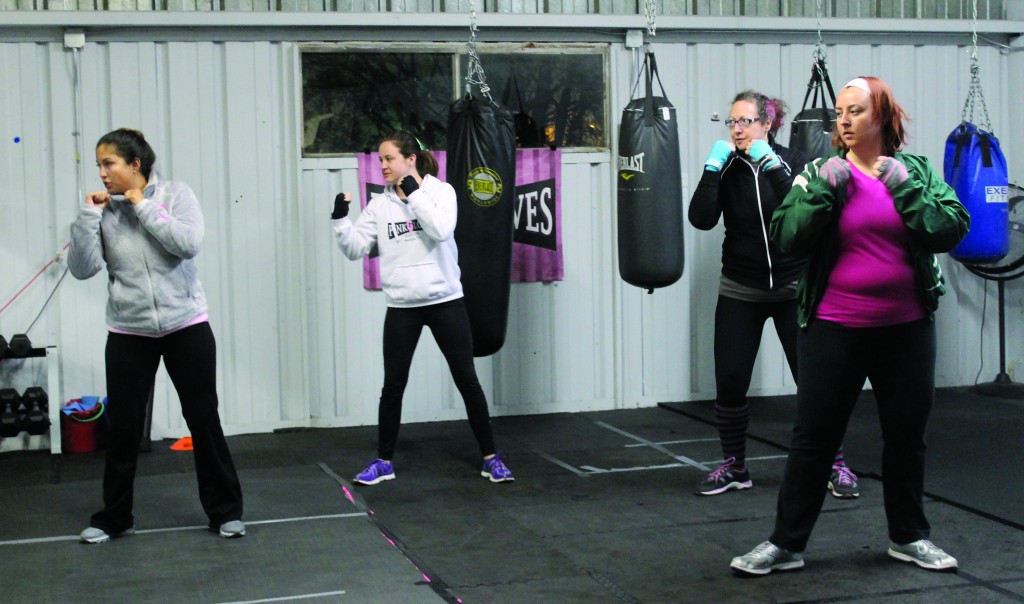 The gloves may be pink, but don’t be fooled. These ladies can punch.

After six years as a high school teacher in Austin, gym owner Brenda Porta needed a change. Having boxed as a hobby in the past, she became very interested when she heard of a training camp that taught how to run a boxing gym. Soon after being certified, Porta opened the first Pink Gloves Boxing (PGB) in the Austin area in April 2013.

“The next thing I knew I was opening and teaching my first class,” Porta said. “It all just happened so fast.”

Pink Gloves Austin is one of 23 gyms in a national chain. Originally starting in Montana, the company has now expanded throughout the country, as well as three locations in Sweden. However, all locations have a similar goal of empowering women through teamwork.

“This gym is different because we all know each other,” Porta said. “We’re all learning something together, so we’re all messing up together and we’re all fixing it together.”

Women from all fitness levels and ages are encouraged to join the PGB family. Lea Nyfeler, a member of the advanced class, joined PGB two years ago as a stress reliever, but the benefits she has gained have far surpassed that.

“I needed a change up, something that would challenge me in a different way, make me feel good about myself and give me some very distinct measures to show improvement,” Nyfeler said. “Pink Gloves did all that.”

PGB is an all women’s boxing fitness program that works in levels called tiers. Women start in tier one where they learn basic boxing technique. After four months, or about 30 classes, the women attempt to test out. If they pass, they move onto the next tier. 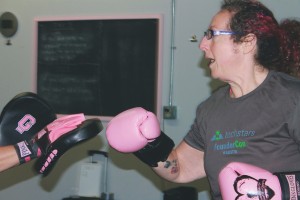 Eve Richter has lost more than 170 pounds in the two years that she has been with Pink Gloves. Photo by Rebecca Salazar

“A lot of boxing is mind work,” Nyfeler said. “You saw what we were doing. We were switching from right handed to left handed, the number combinations, the movements, putting it together on the fly, working with a partner that’s all very complex. It’s a whole different level of exercise.”

“This was the first exercise that I didn’t despise and stuck with,” Richter said.

After losing 170 pounds in the past two years, Richter accredits much of her success to PGB.

“Fitness has become an addiction and a way of life,” Richter said. “It would be hard to imagine not coming here.”

In addition to changing women’s lives through fitness, Porta also found a way to make a difference in the community through their annual Punch-A-Thon, which was started last year. Members of the gym as well as people in the community are encouraged to form teams in order to raise money for the Seton Breast Care Center. PGB will be holding their second annual Punch-A-Thon in April, and their goal is to reach $10,000.

Along with servicing the community, Porta says one the greatest benefits she has experienced though her job is watching women walk into the gym and leave as a completely different person.

“That’s just the most rewarding thing that I can give them; friendships, strength and just a different way to look at life,” Porta said. 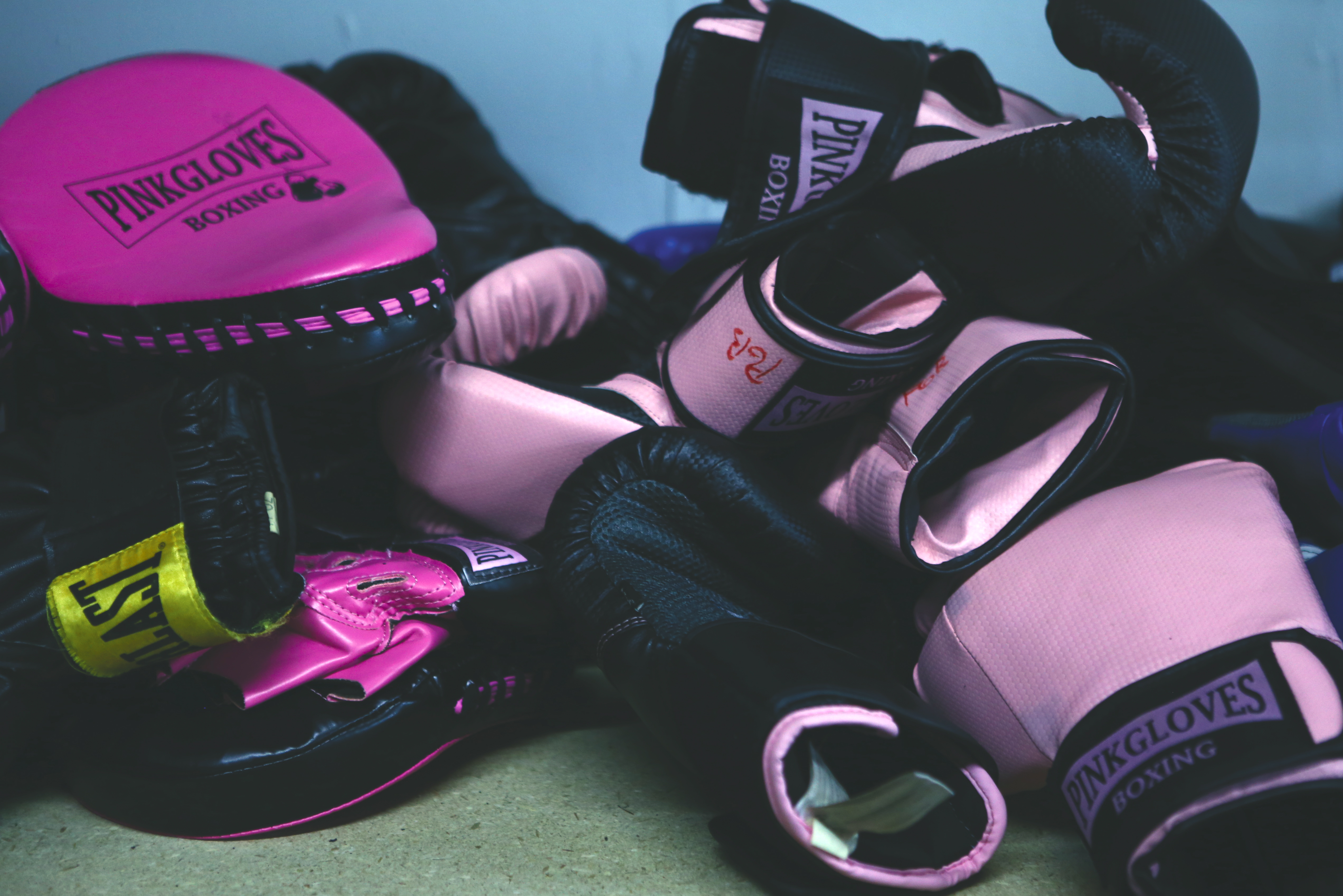 Pink Gloves Boxing Gym Austin opened in April 2013 and, since then, has attracted women of all ages to participate in this boxing fitness program. Skill level is determined by a tier system where each tier requires four months of training and passing a test in order to move on to the next level. Photo by Sylvia Butanda 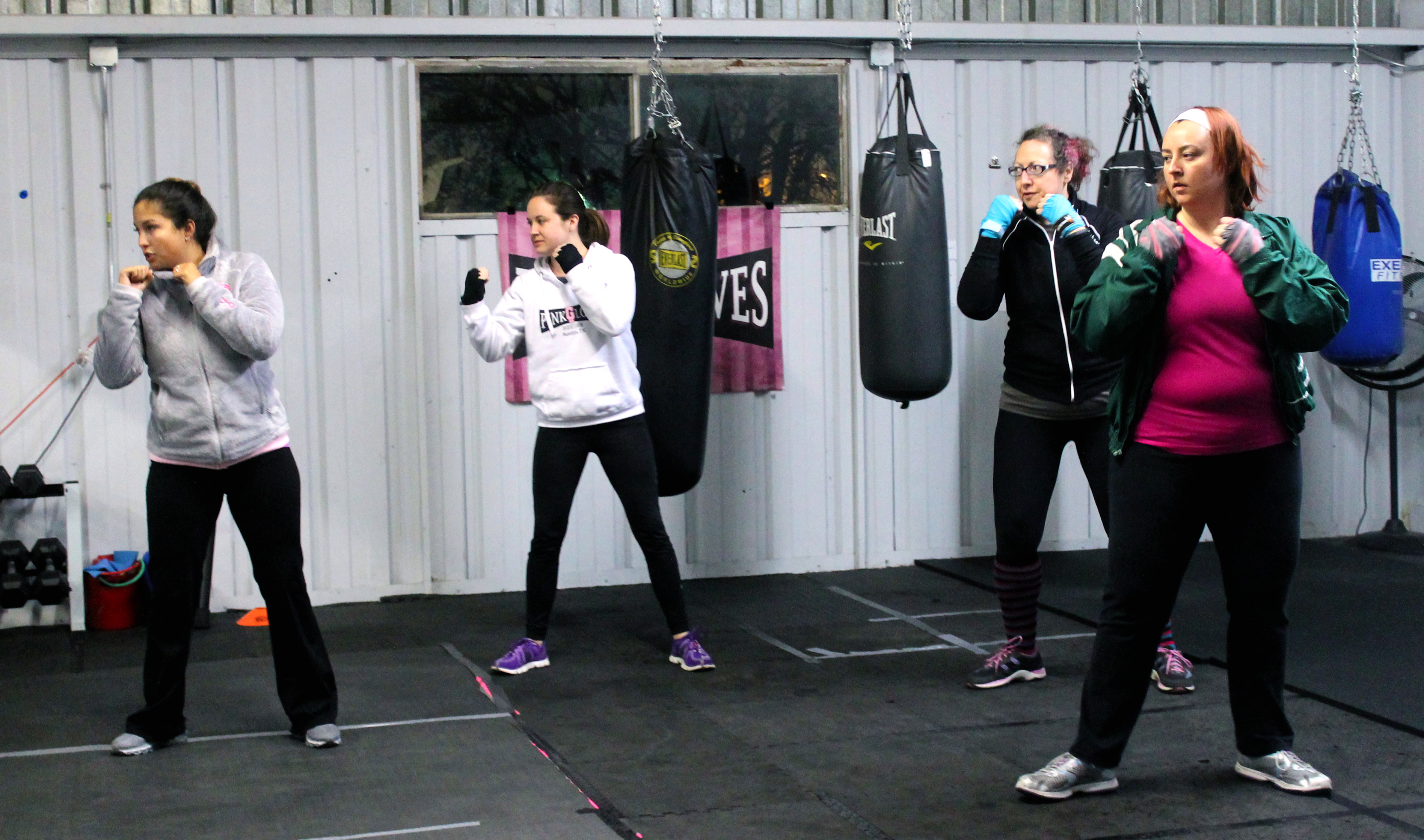 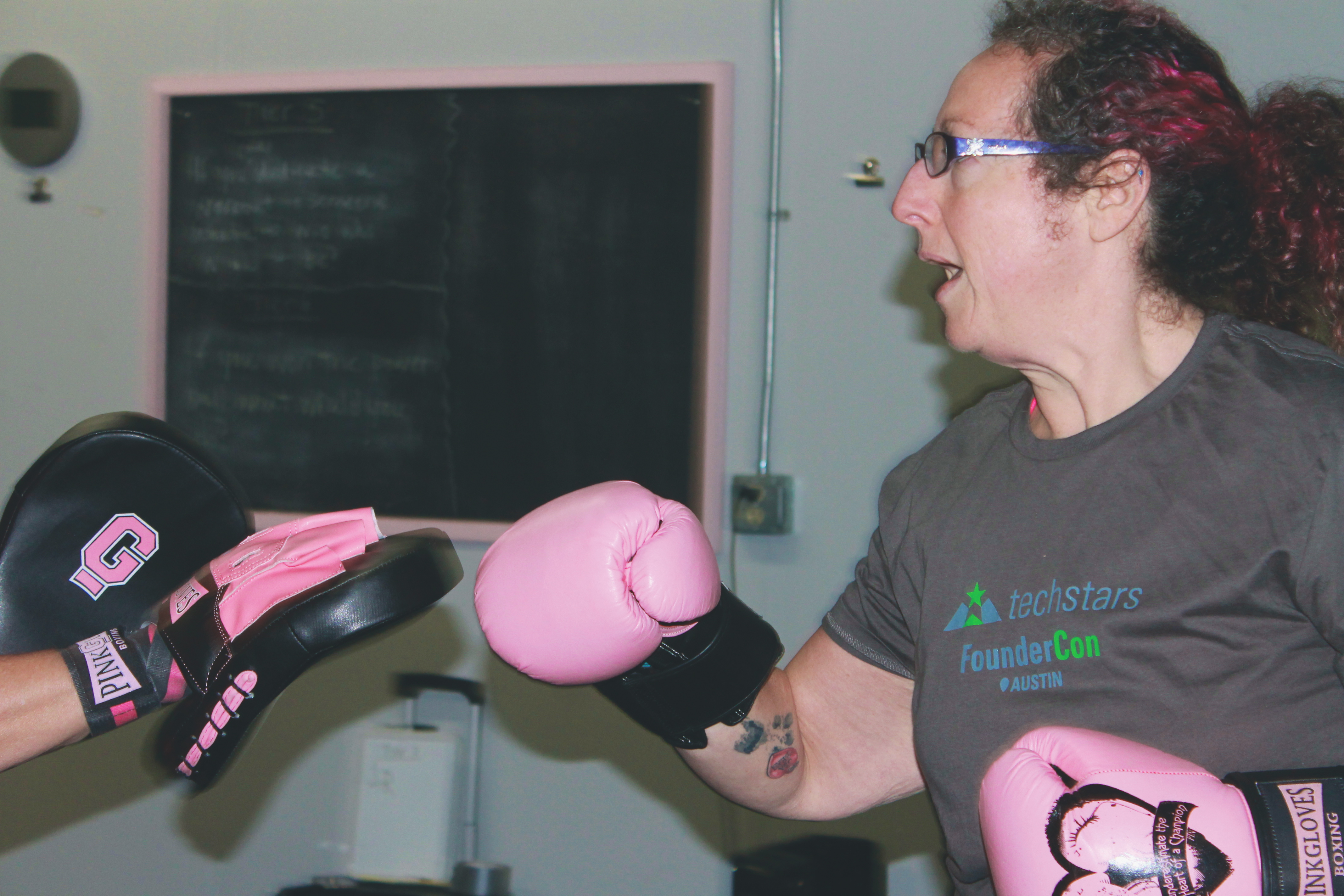 Eve Richter, a Tier 6 student, has lost more than 170 lbs. in the two years that she has been with Pink Gloves. Since then, Richter says exercise has been an addiction that she intends to keep up. Photo by Rebecca Salazar 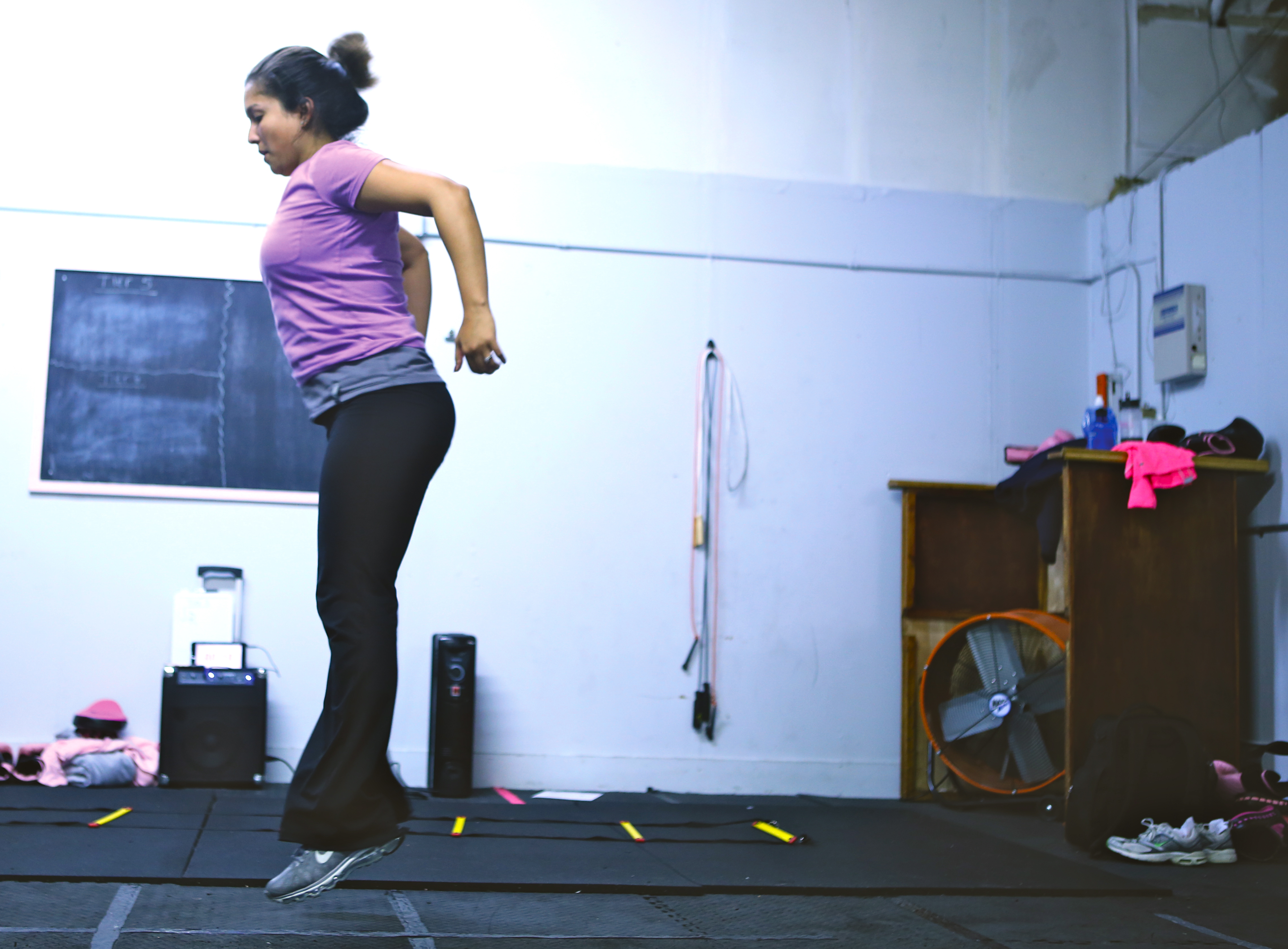 After the boxing gym she attended closed down, Porta contacted PGB headquarters, completed a training camp for new owners and instructors and has since been around her passion constantly. Photo by Sylvia Butanda 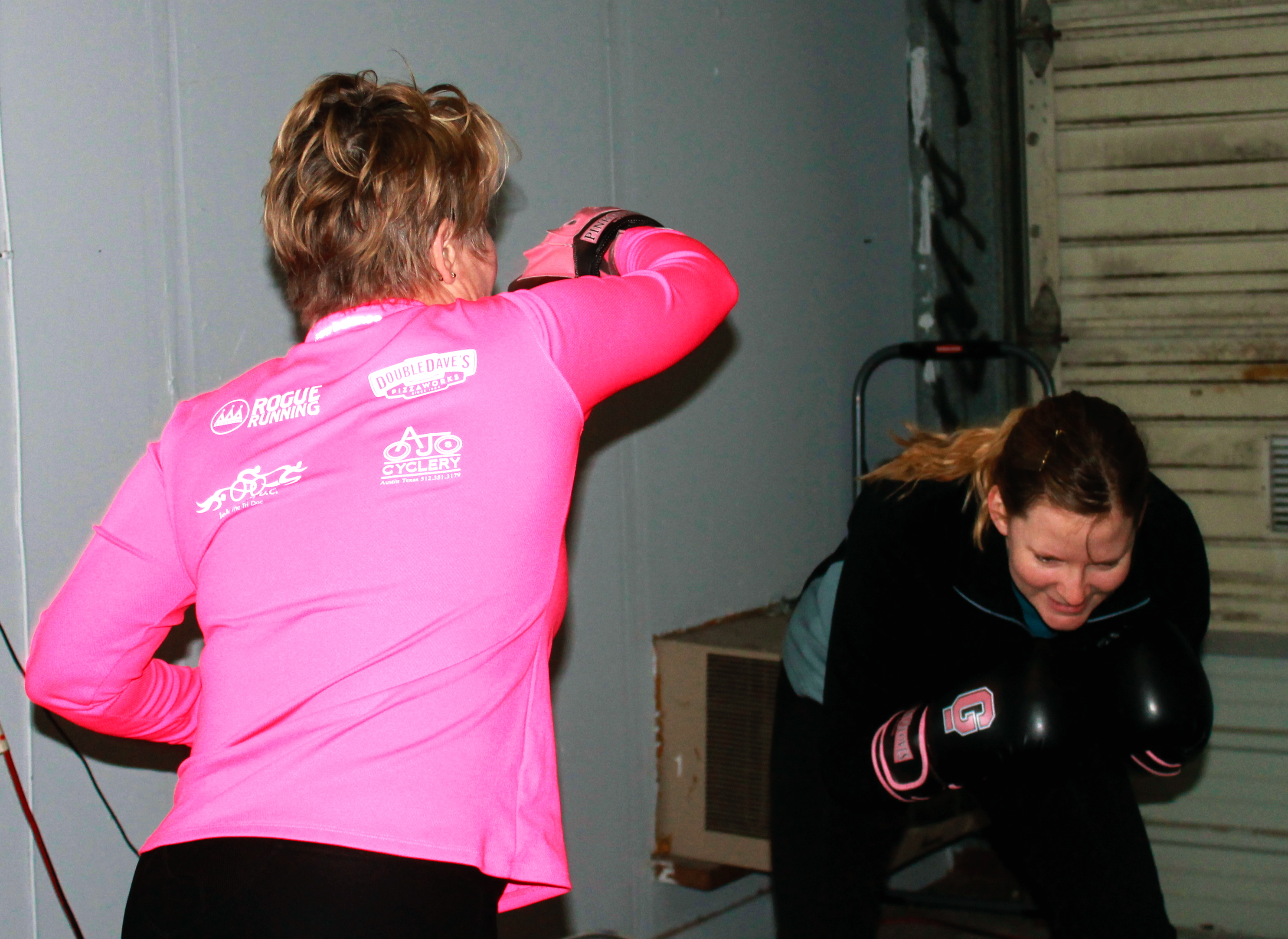 Two years ago, Lea Nyfeler (pictured left) came to PGB with the goal to relieve stress. “I needed a change up," Nyfeler said. "Something that would challenge me in a different way, make me feel good about myself and give me some very distinct measures to show improvement and Pink Gloves did all that.” Photo by Rebecca Salazar 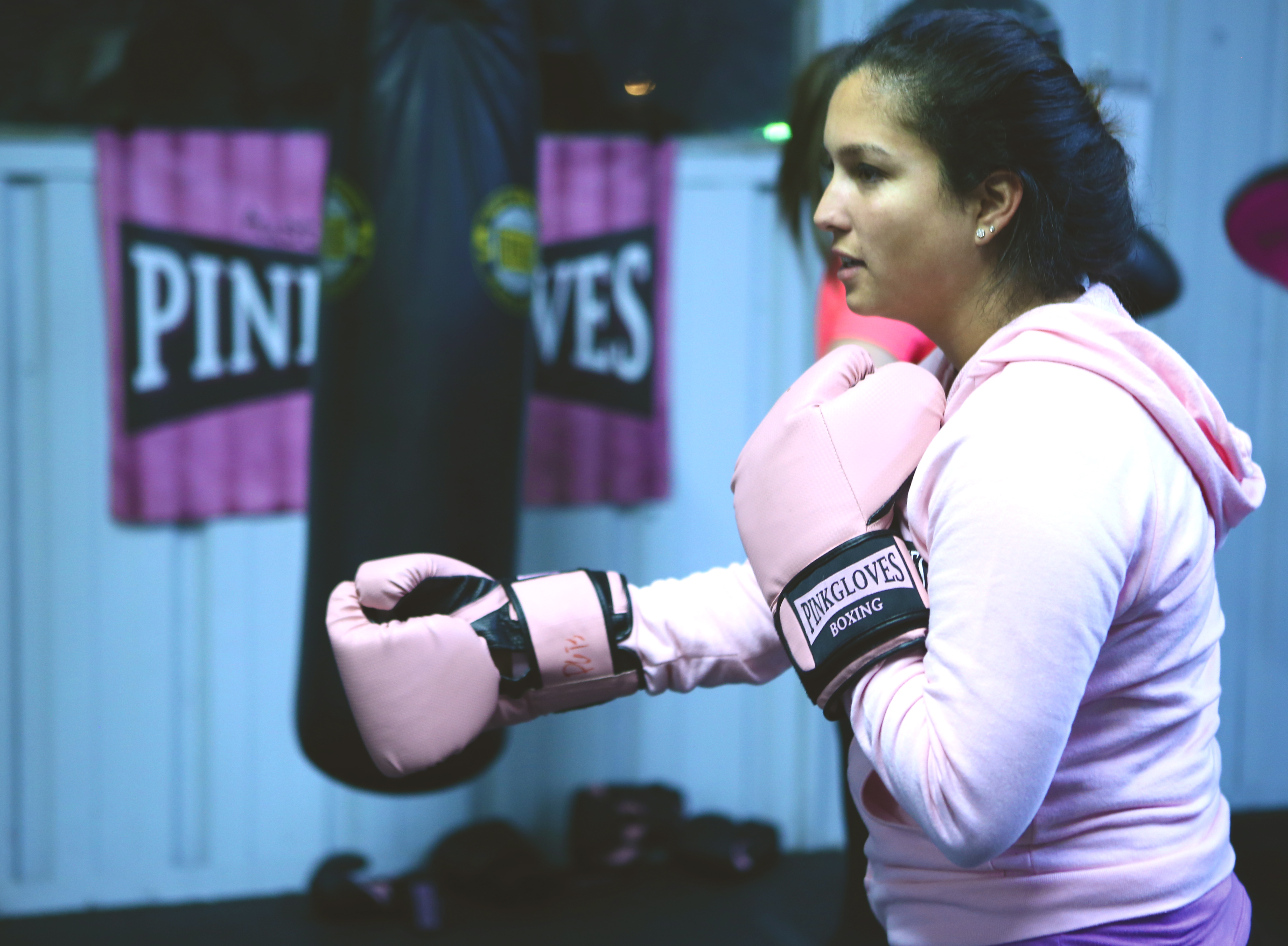 Porta taught for six years at a local high school before deciding she wanted to pursue something different. Before she knew it, she went from having 2 people attend her class to having to put a cap because of so much interest. Currently, PGB Austin has approximately 70 members. Photo by Sylvia Butanda 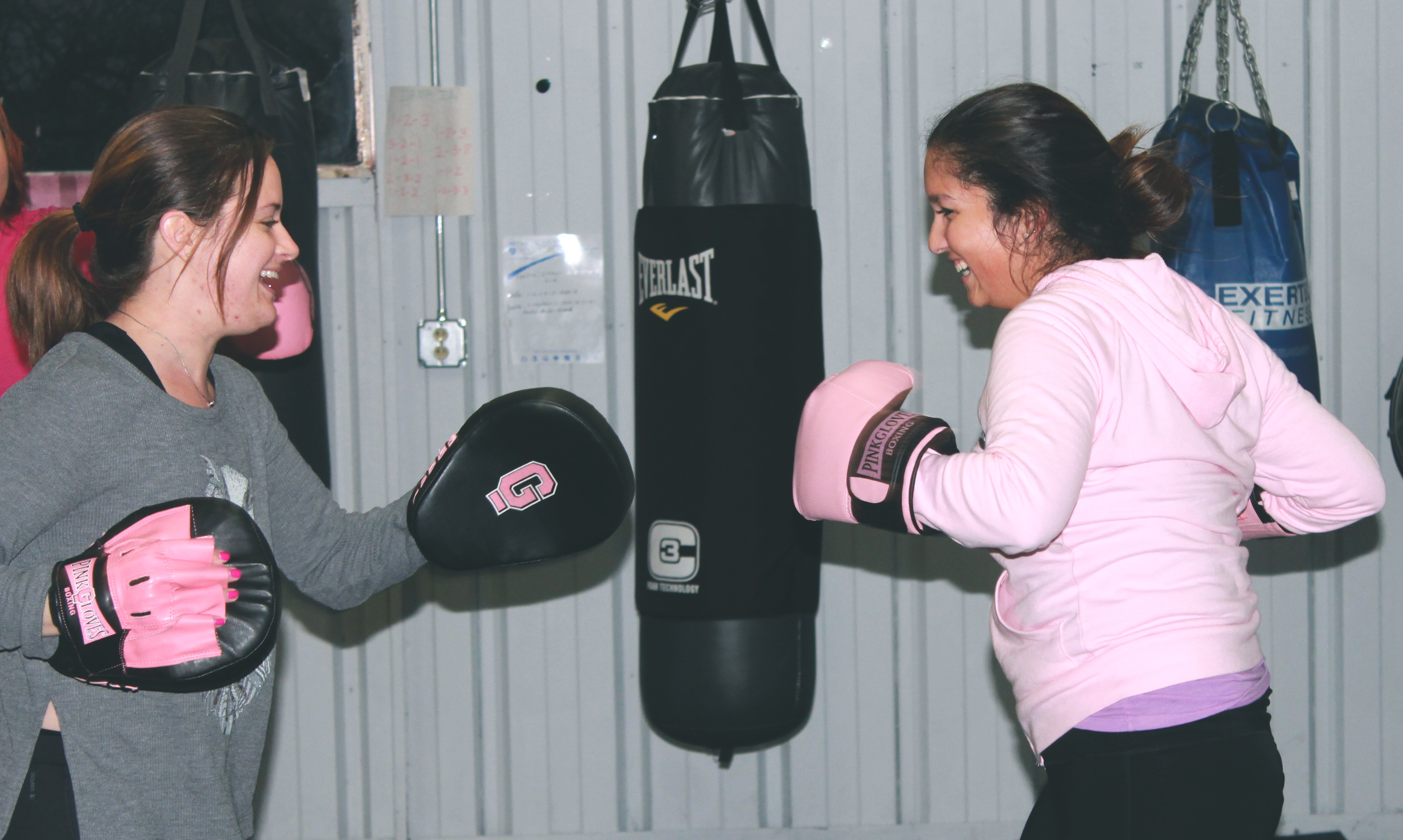 Porta spars with Ashley Card (pictured left), a Tier 6 student, Tier 1 instructor and Porta’s best friend since they met as dance students at Texas State University. “It’s good to have a community, it’s good to be here together and it’s nice to know that you’re not doing it on your own,” Card said. Photo by Rebecca Salazar 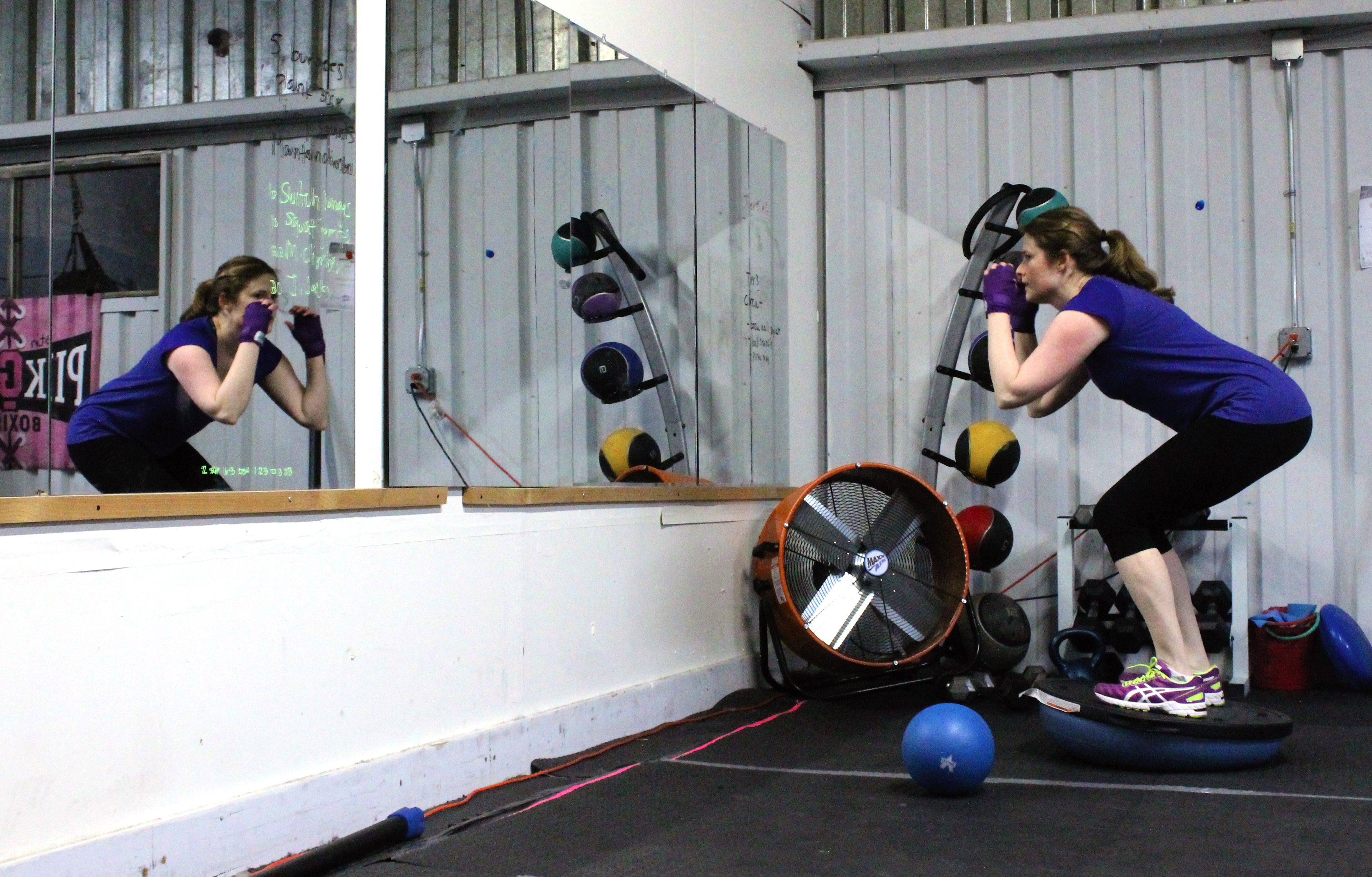 Emily Zalkovsky is a Tier 3 student who has been coming to PGB since May 2014 for the satisfying workout and the chance to learn something new, as she progresses in from each tier. “So far, the challenging part about Tier 3 is remembering the combos and learning to be quicker about what comes next.” Photo by Alyssa Brant 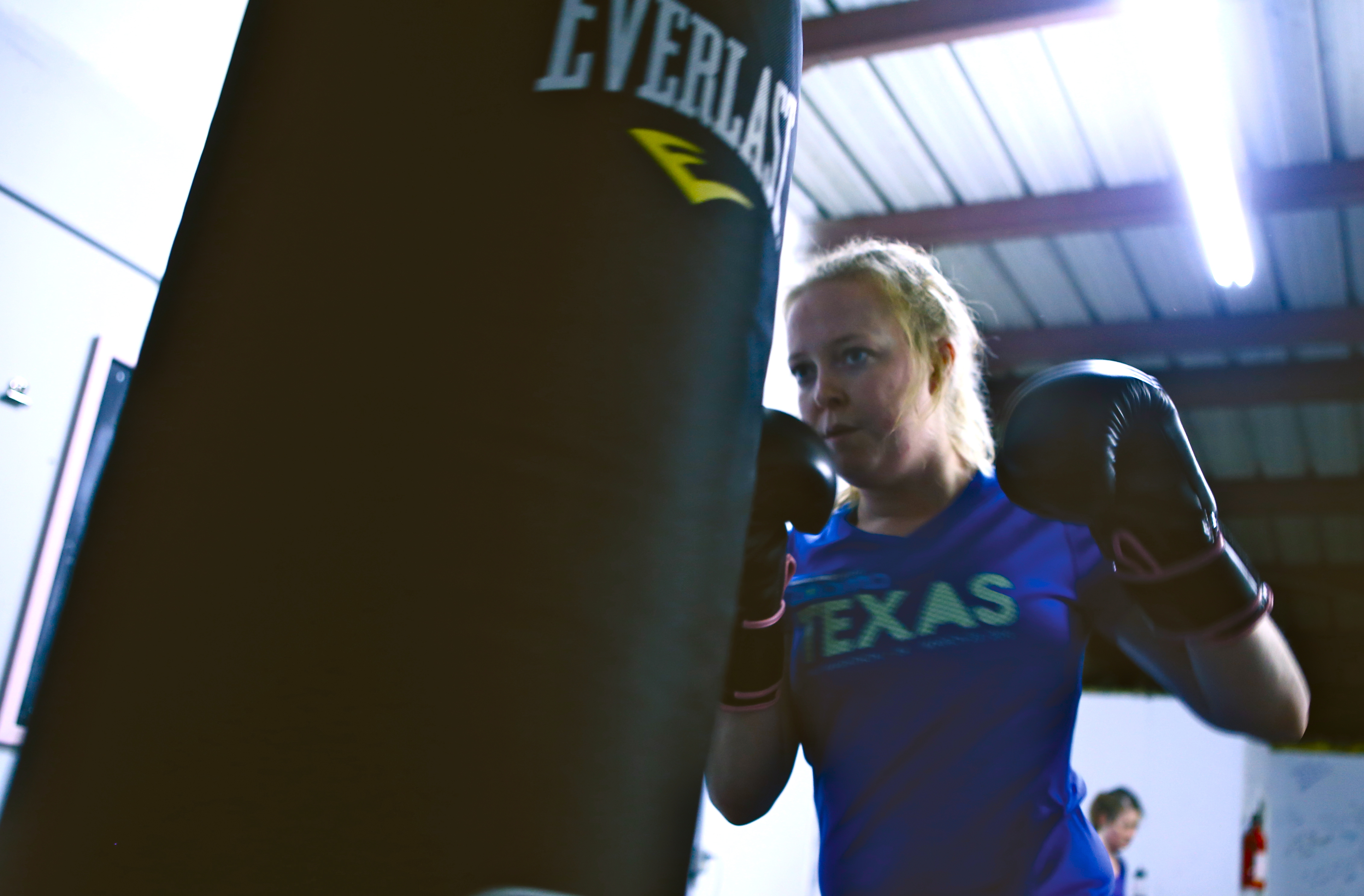 Alesha Williams is a Tier 3 student who had her start at PGB in June 2014 and has always liked the environment Pink Gloves provides.“You could be good, you could be bad, you could do it just for the workout or you can try to get awesome at it,” Williams said. “You’re just accepted.” Photo by Sylvia Butanda 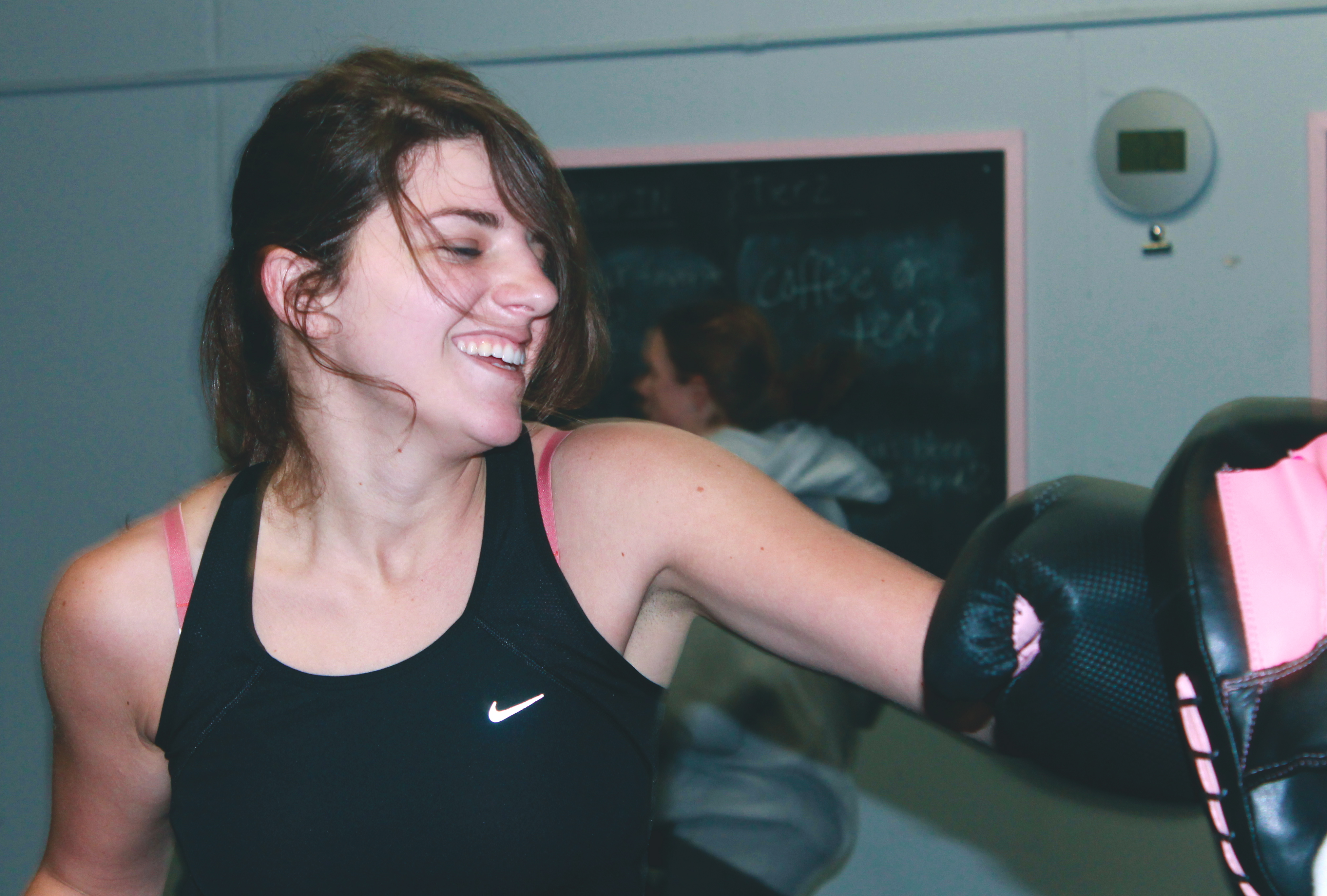 Women of all ages and from all backgrounds participate in order to get in shape, learn a new skill or to simply empower themselves. Photo by Rebecca Salazar 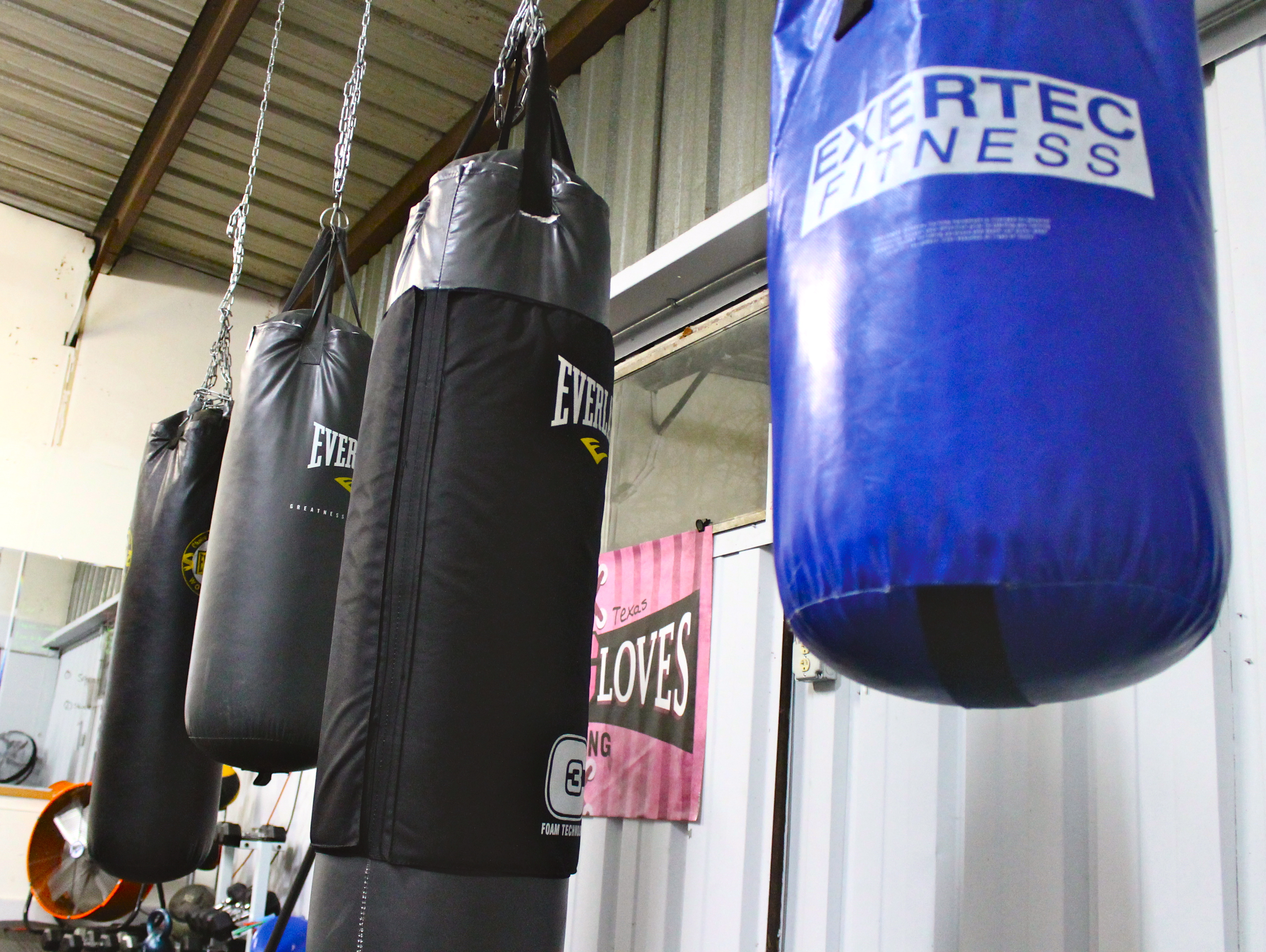 Pink Gloves Austin is one of 20 gyms in a national chain headquartered in Helena, Mont., that also has three locations in Sweden. Porta runs the only PGB location in Texas. Photo by Rebecca Salazar 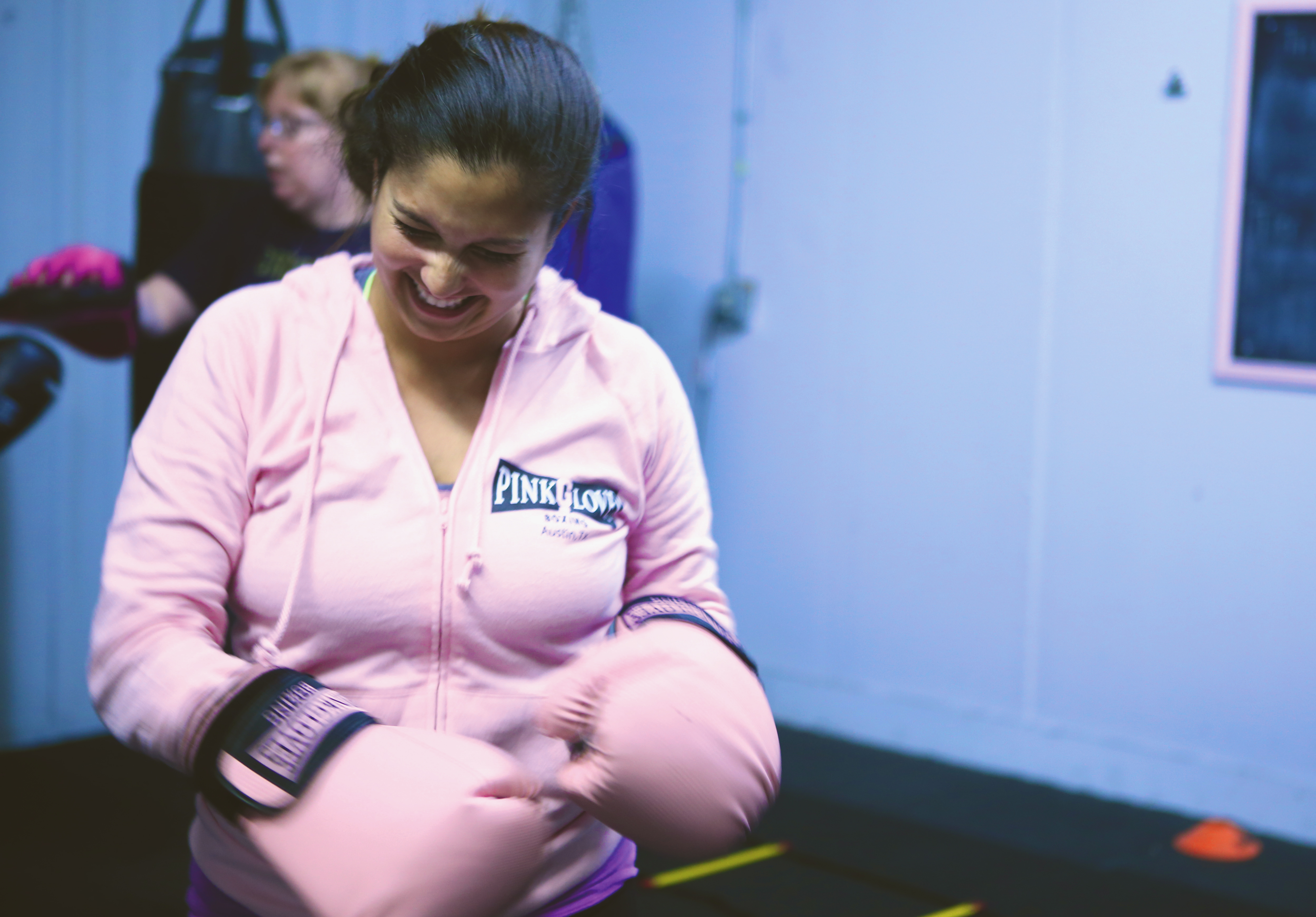 Porta has a rewarding feeling when she sees how women come in then come out as almost completely different people from when she first them, whether its a physical improvement or a stronger sense of confidence. Photo by Sylvia Butanda

← Austin Beerworks: One big drunk family
Beef prices on the moo-ve – How Austin businesses keep up →