Crushin’ It Up in Austin 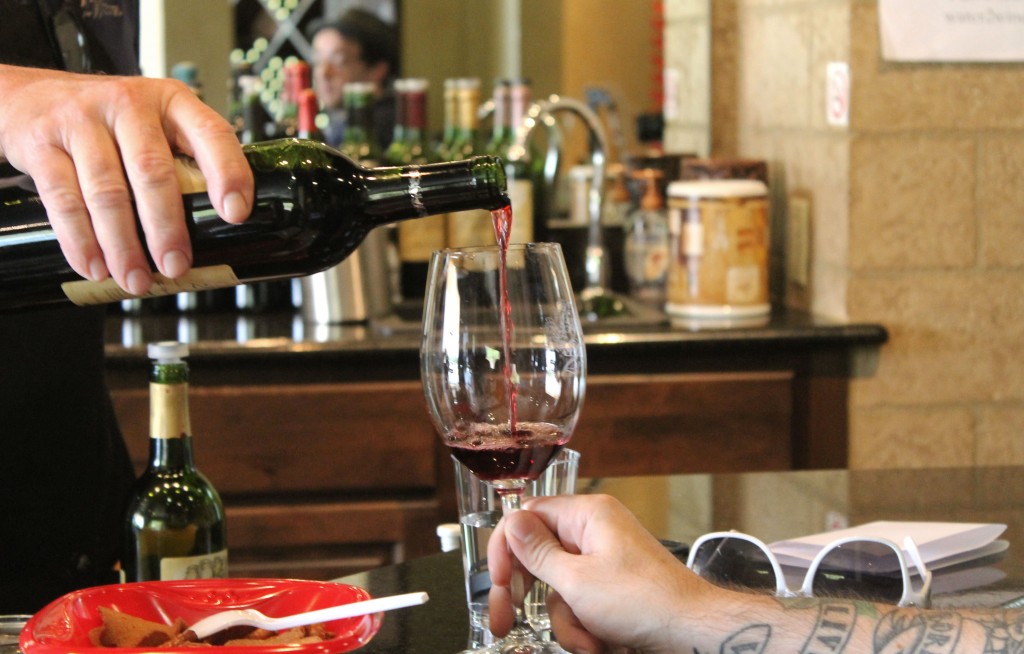 In order to cater to their large client base, Water 2 Wine in South Austin offers about 60 different wines on their menu. Photo by: Rebecca Salazar

Wine is not just another alcohol. It is a way of life and a changing culture.

Before making his way to Austin five years ago, Chris Latzko worked in the Napa Valley wine industry for 18 years. During that time, he attained his vintner’s license as well as a degree in oenology from The University of California, Davis. He now makes and serves wine at Water 2 Wine, which is an urban winery located in South Austin.

“We’re like the old petite wineries in Europe,” Latzko said. “Everything is hand bottled, hand corked and hand labeled.”

Water 2 Wine is a small urban winery, which means they do not grow grapes on site. They instead import grapes from around the country, and complete the rest of the process in house.

In comparison to larger scale wineries that produce from 500 to 5,000 gallons of wine at a time, Water 2 Wine produces around six to 10 gallons. To start the process, the juice is poured into a bucket and heated up to around 75 degrees in order to start the fermentation process. The flavors are blended in and then oxygen and yeast are added. The mixture is capped to ferment.

“We are low in preservatives, and sometimes a little higher in alcohol,” Latzko said.

Damian Schillaci considers himself a wine connoisseur and is a club member at Water 2 Wine. He ventures into the South Austin location about one to two times a month.

“I looked at some of the other custom wineries in town, and I like this wine better than the other ones,” Schillaci said.

On the menu there are about 60 different wines, and in general they pour about 30 of those. According to Latzko, some don’t sell as well as others, but they keep them around to cater to their large client base. However there are about four wines that are very popular and are kept on hand at all times. 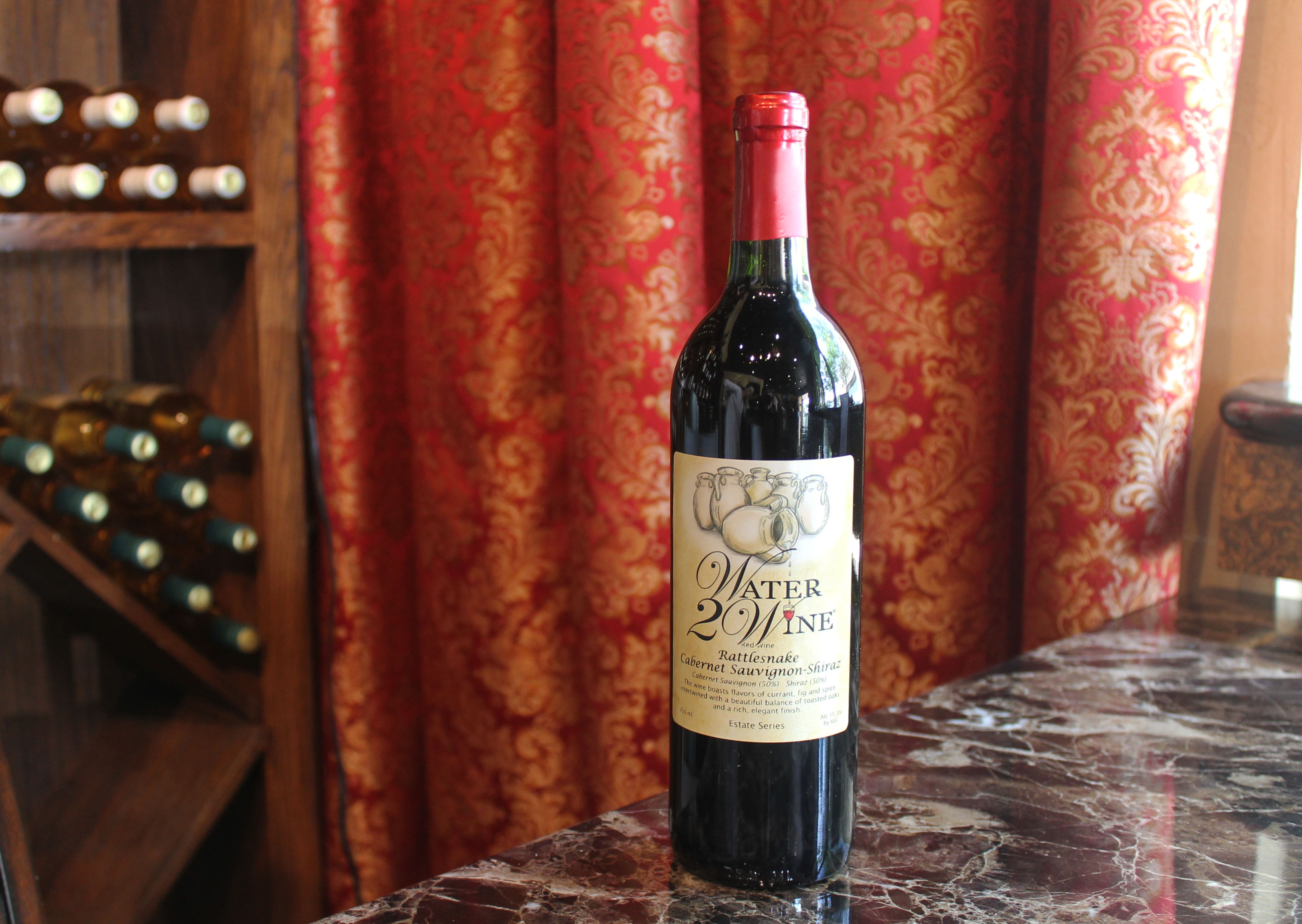 Rattlesnake Cabernet Sauvignon-Shiraz
The wine boasts flavors of currant, fig and spice intertwined with a beautiful balance of toasted oaks and a rich, elegant finish. Photo by: Rebecca Salazar 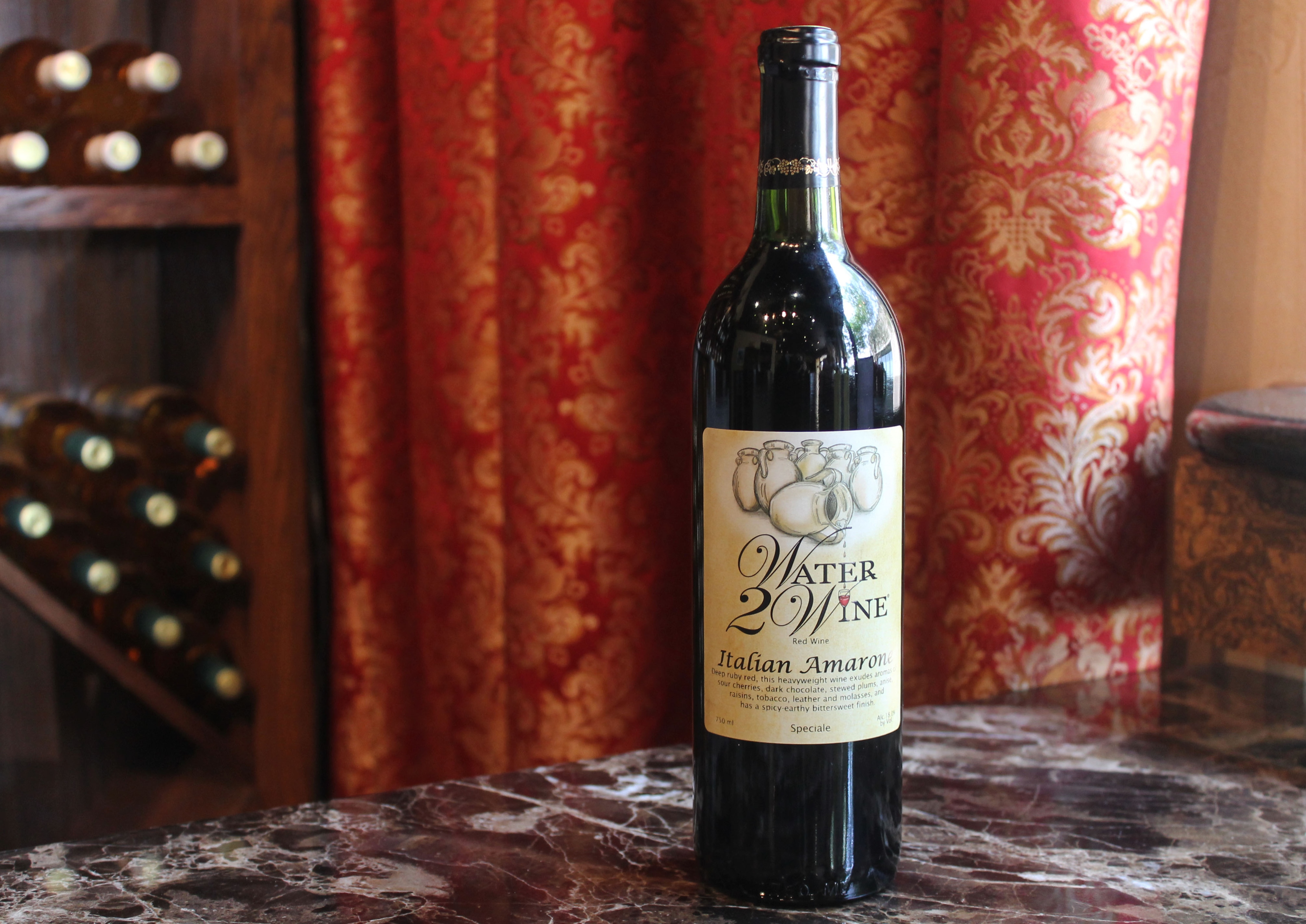 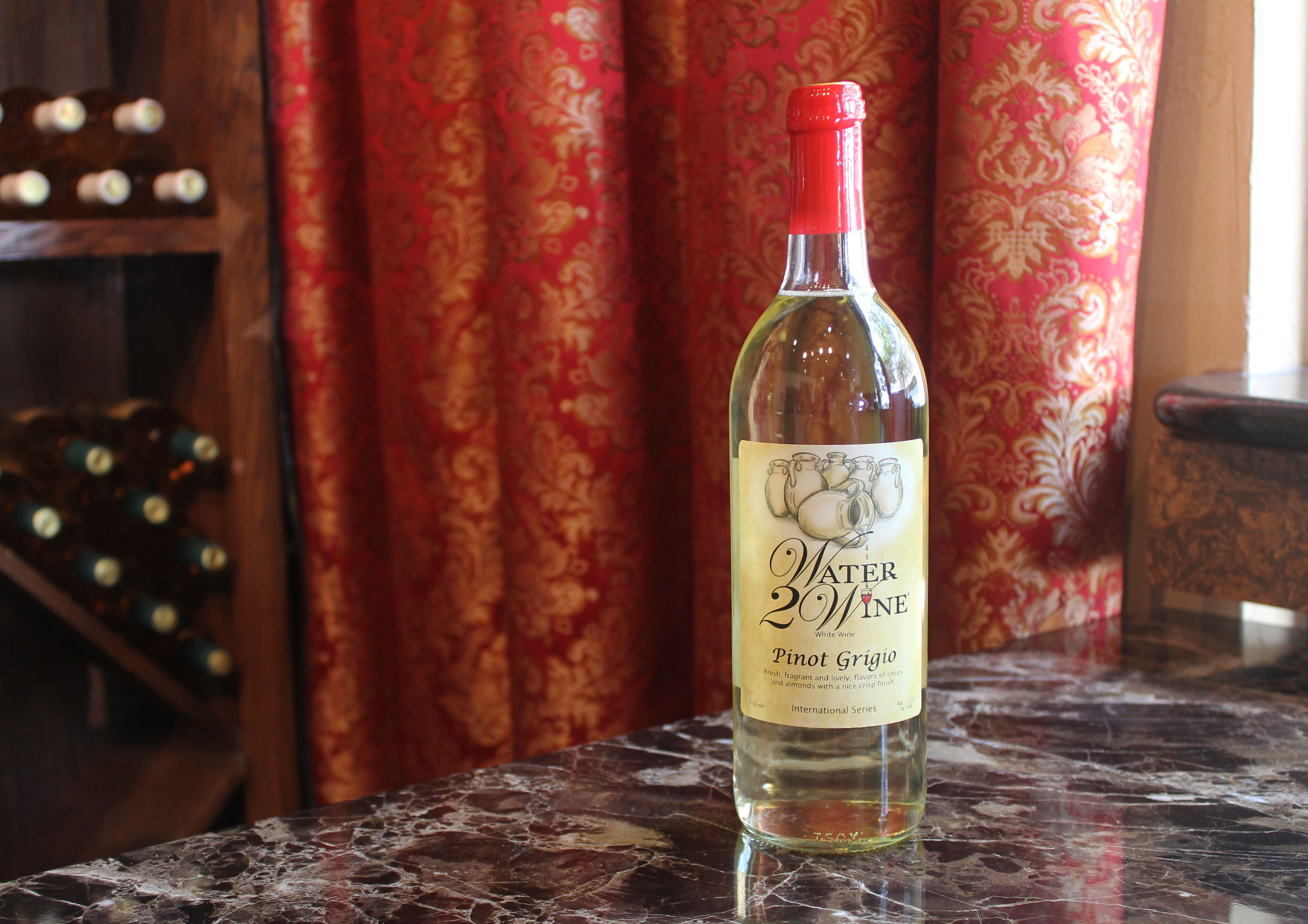 Pinot Grigio
Fresh, fragrant and lively, flavors of citrus and almonds with a nice crisp finish. Photo by: Rebecca Salazar 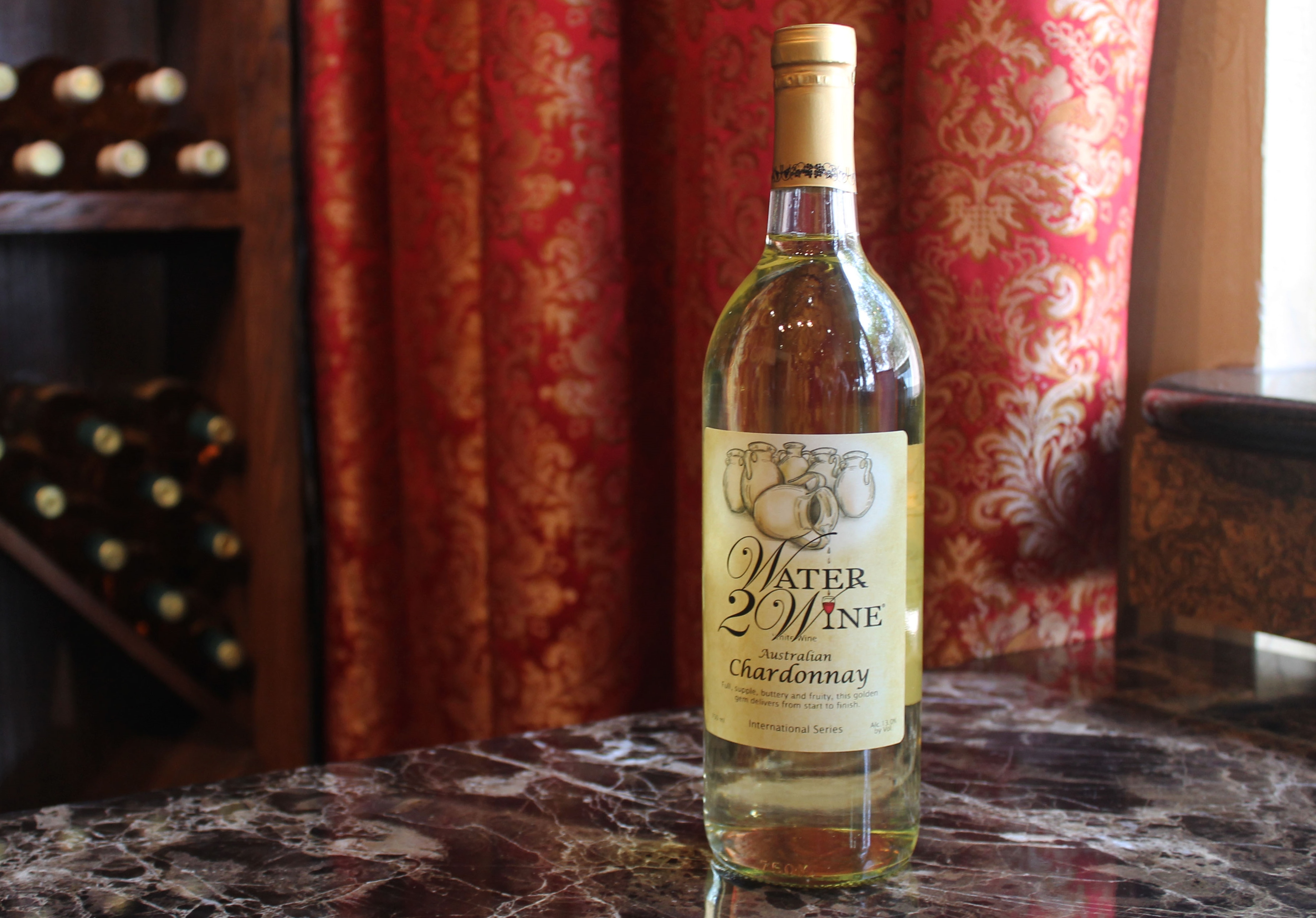 “It’s also a social thing,” Schillaci said. “It is just a fun place to come, and it is fun that it’s custom wines.”

In addition to wine tastings and selling custom wine, Water 2 Wine hosts additional events like live music on Saturdays, paint and wine parties and cooking contests in order to cater to the booming culture.

The concept of small custom wineries actually started in Canada about 30 years ago, according to Latzko. The tax to bring wine from California over the boarder was outrageous, so they decided to make their own. This trend has now traveled south and is growing in popularity across the United States, including Austin.

“It’s not as big as it is say like LA, New York and Miami,” Latzko said. “But Austin is on its way up and up.”

Particularly in the past three years, Latzko has seen a big change in the wine culture overall. In Austin alone he has seen more tasting bars open across the area, as well as more wine stores and places to just drink wine like Apothecary and Flour and Vine. He has also seen how the taste buds of the area have developed over time.

“Years ago people were still asking for white zinfandel, which was the most popular wine in the United States,” Latzko said. “Now it’s more about the pinots, the cabs, the merlots and blends.”

In addition to the change in preference of wine, the way wine is being paired is also evolving.

“There used to be a real set protocol for wine pairing,” Latzko said. “But it is not as set in stone as it used to be.”

Traditionally white wines are designated for fish, fruit or different kinds of light cheeses. Red wines usually go with meats, chocolate and heavier cheeses, like Italian style cheeses. However according to Latzko, nowadays it just depends on the preference of the consumer as well as the mood of the occasion.

“Like they say, no good conversation started over a salad,” Latzko said. “It always starts over wine.” 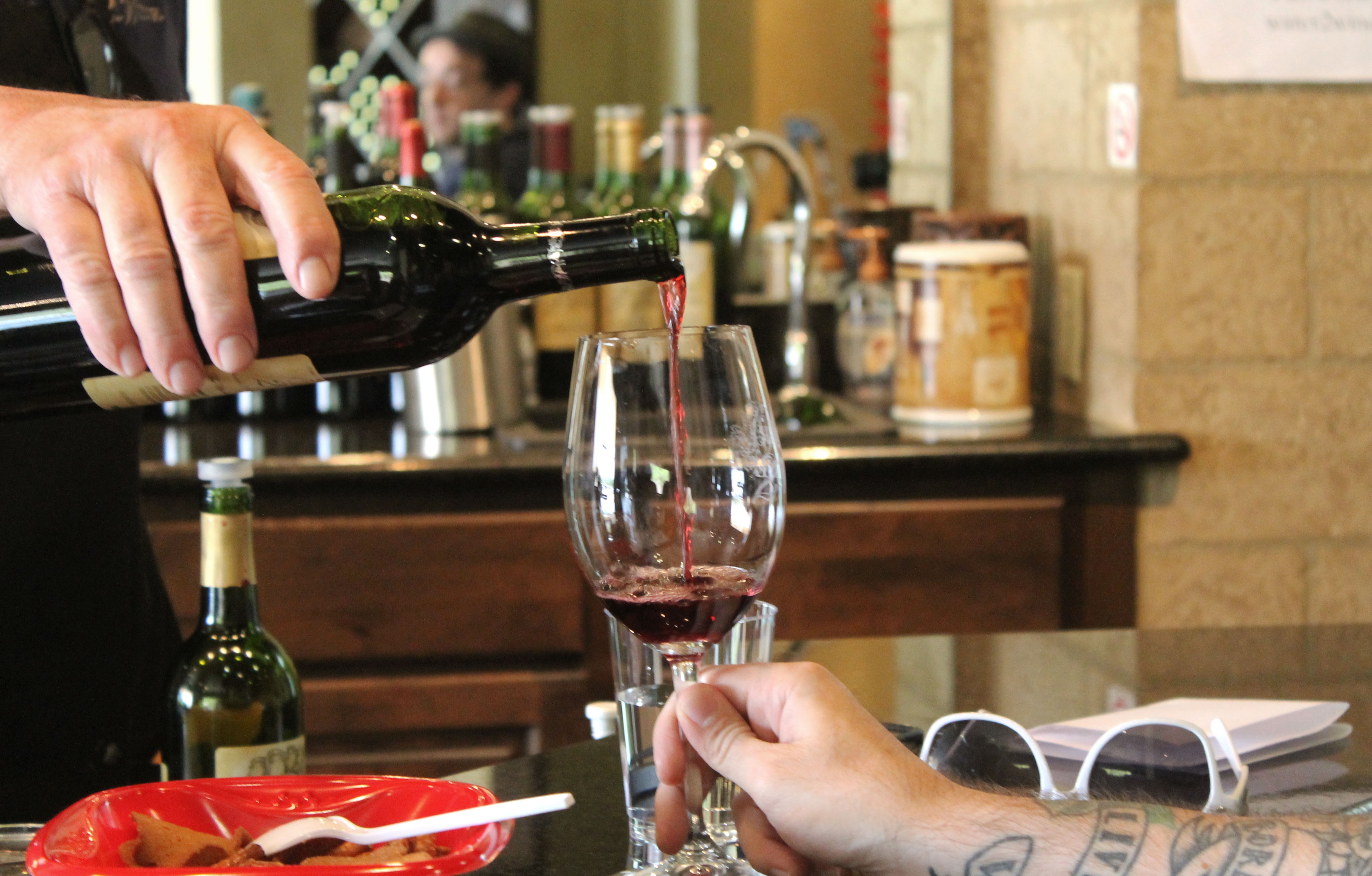 In order to cater to their large client base, Water 2 Wine in South Austin offers about 60 different wines on their menu. Photo by: Rebecca Salazar 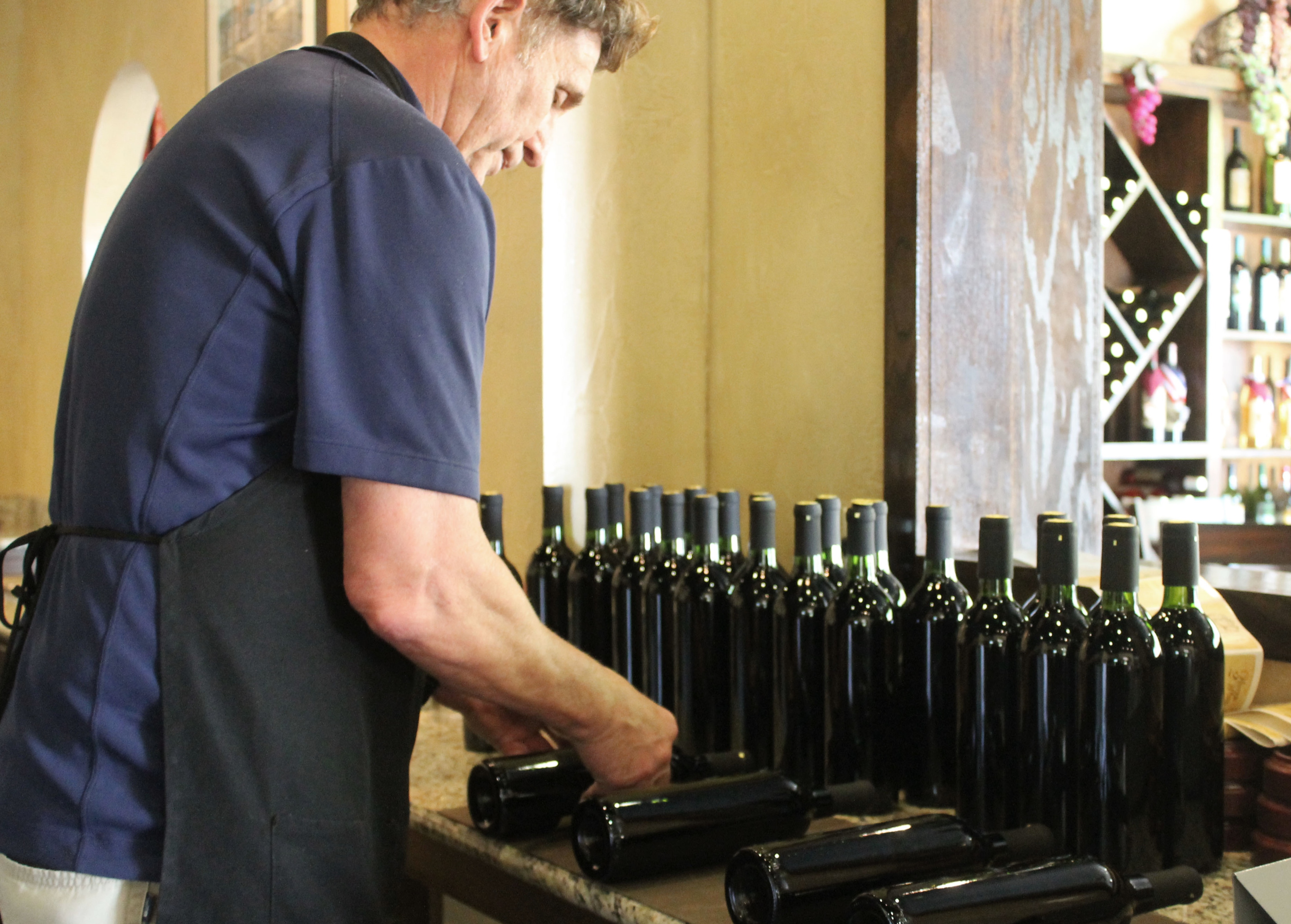 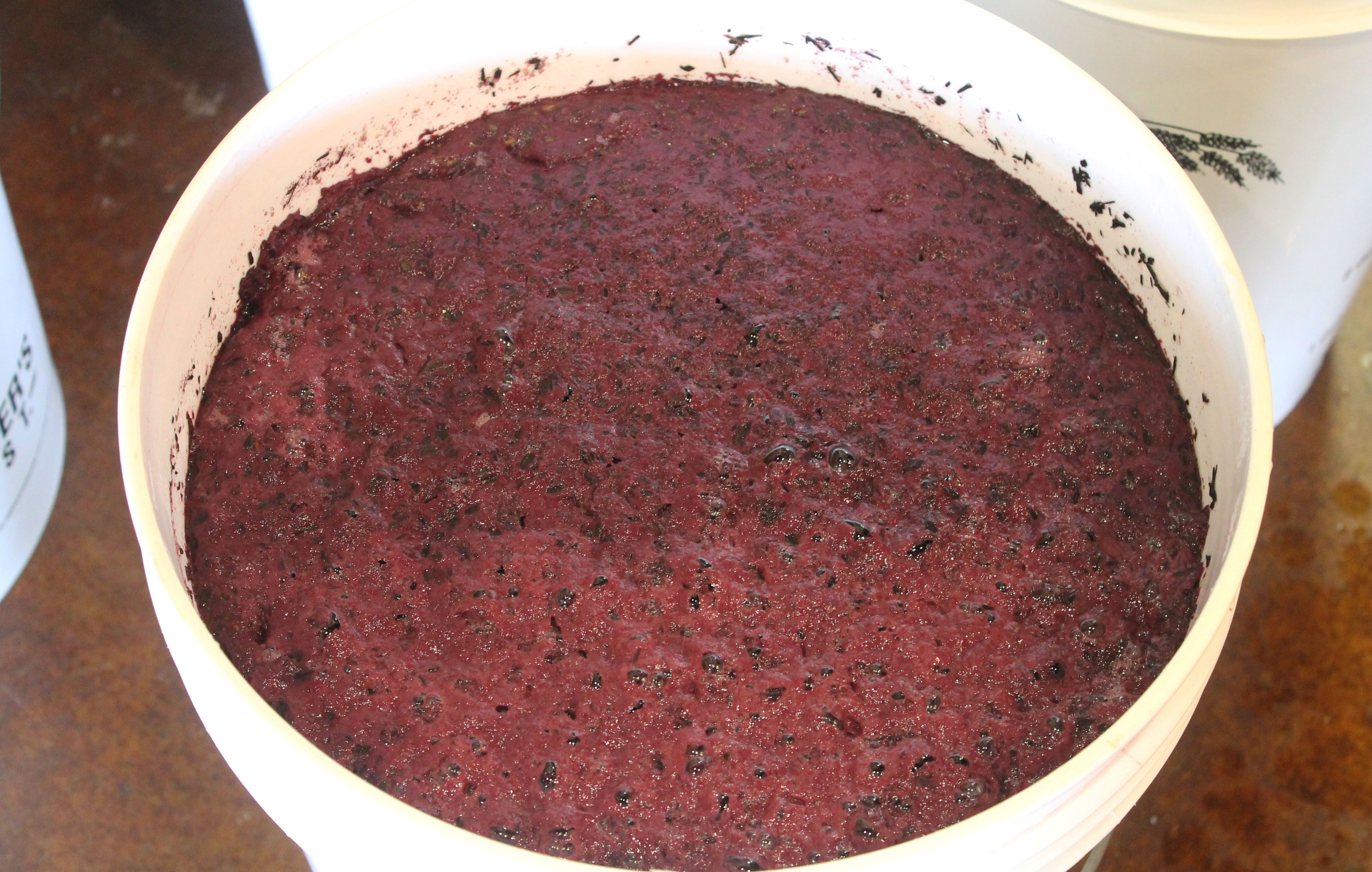 To start the wine process, juice is poured into a bucket and heated up to 75 degrees in order to start the fermentation process. The layer on top is called the cake, which is composed of the grape after being squished. Photo by: Rebecca Salazar 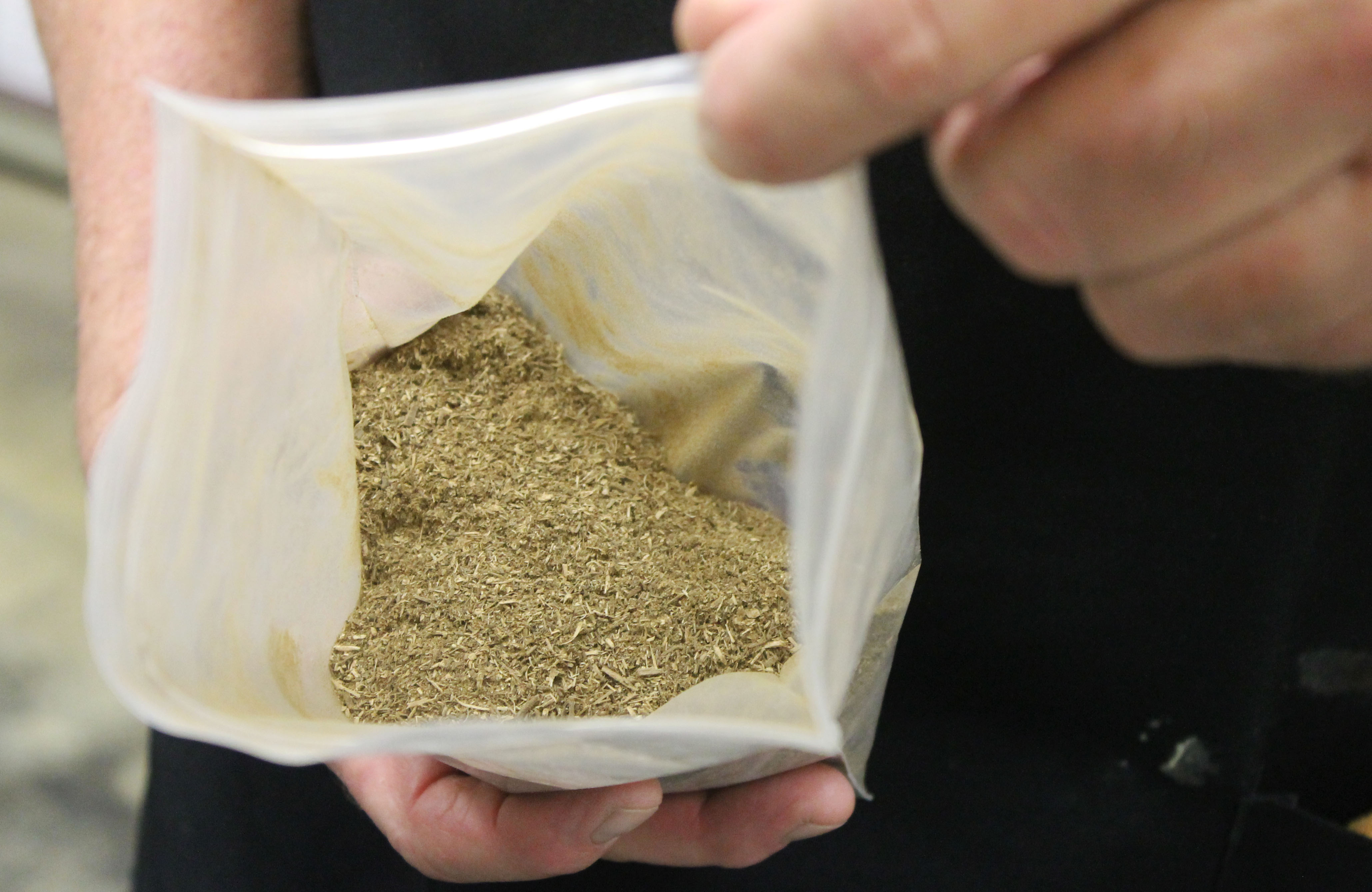 Oak dust is used to remove any vegetable component that may have been infused into the grapes. This can happen if there are vegetables being grown near by or if vegetables were grown in the soil previously. Photo by: Rebecca Salazar 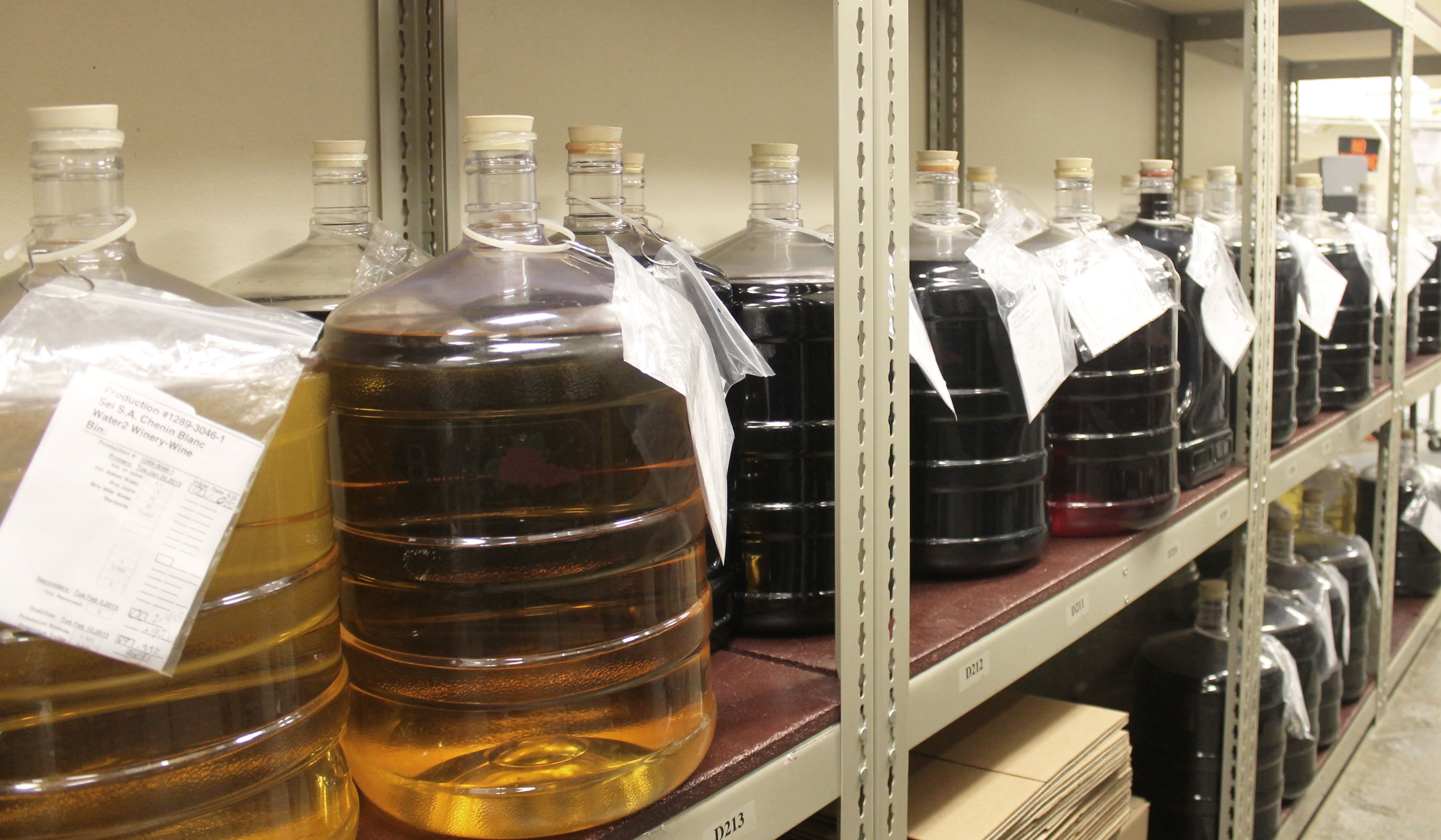 Wine is kept air locked in five gallon carboys with labels that read what day the wine will be ready to be served. They use plastic jugs because wooden barrels can range from 0 for a 30 gallon up to 0 for a 59 gallon. Photo by: Rebecca Salazar 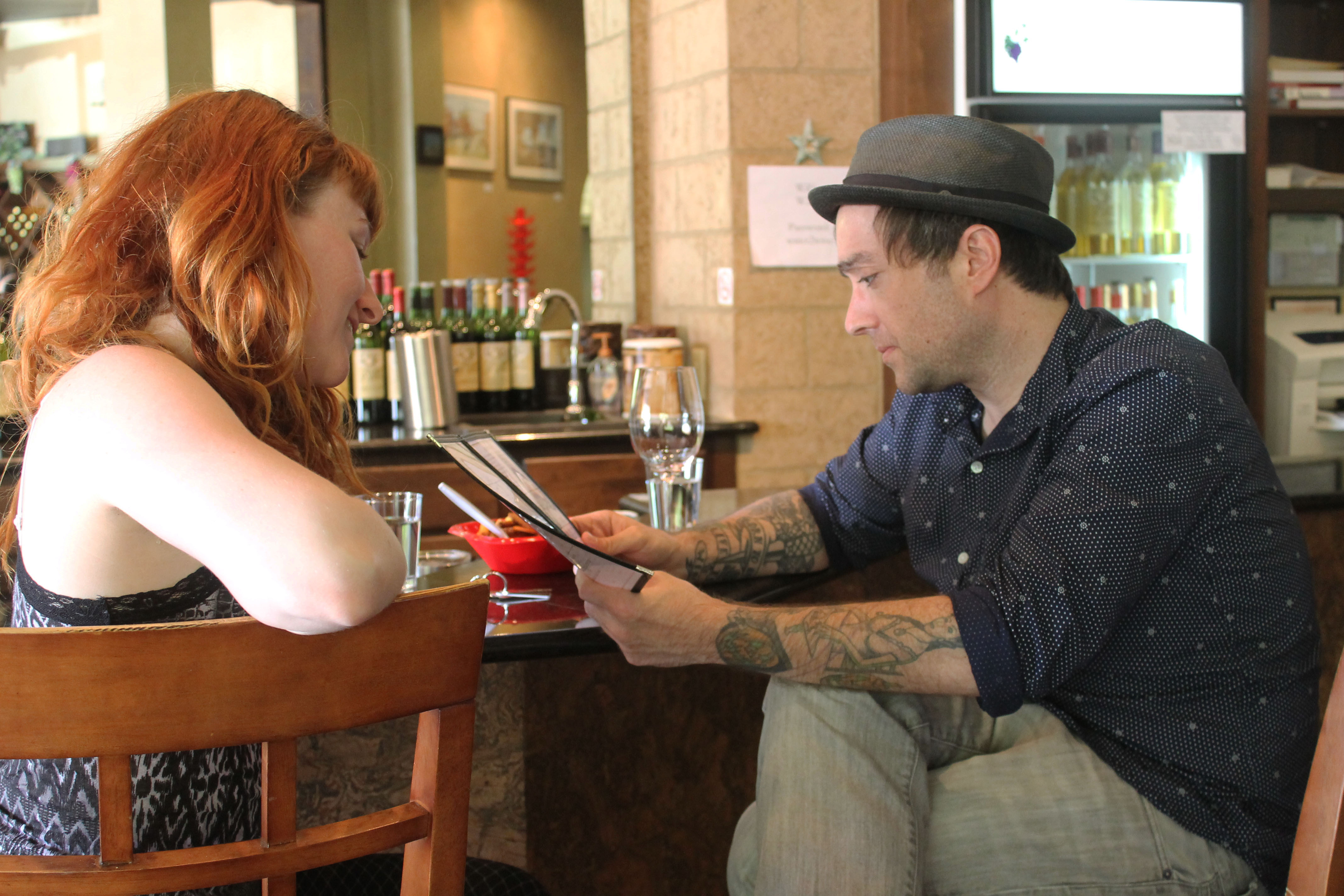 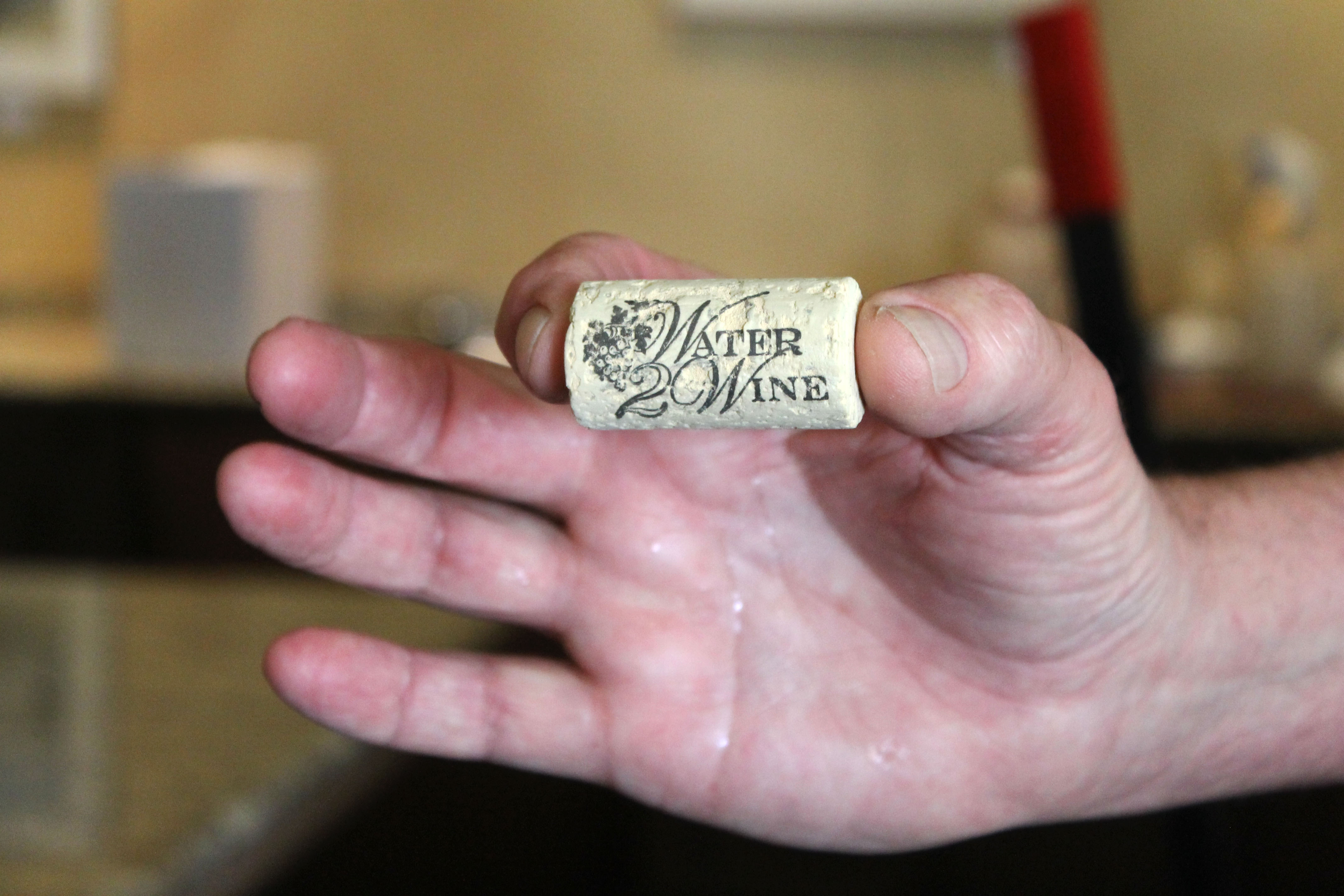 Water 2 Wine has been in business for three years and they take pride on all the personal and custom memorabilia that is made for their customers. Photo by: Rebecca Salazar 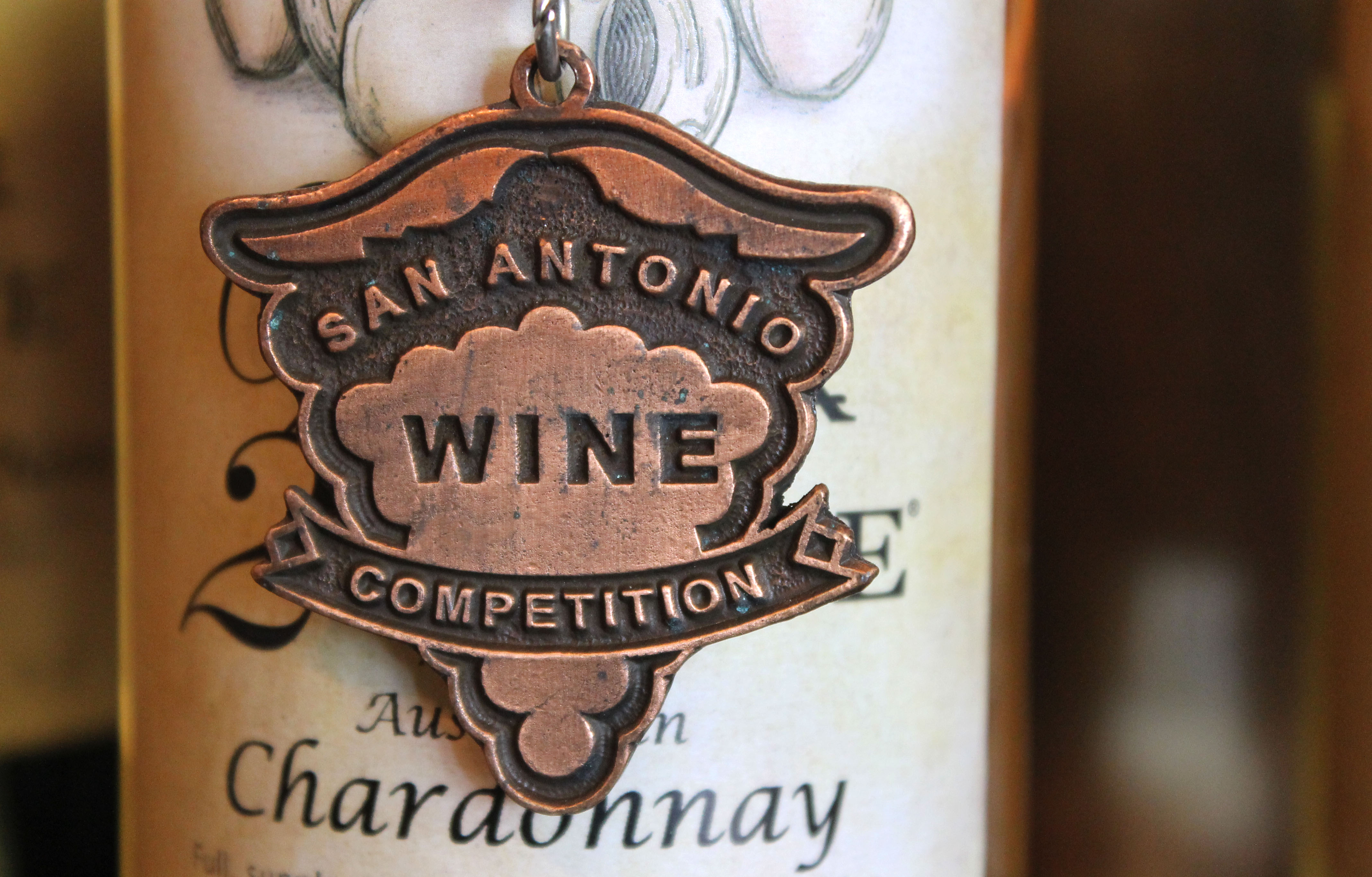 Water 2 Wine has won multiple awards for their customs wines with the most awards going to their Chardonnay, Pinot Grigio, Italian Amarone and Rattlesnake Cabernet Sauvignon- Shiraz.