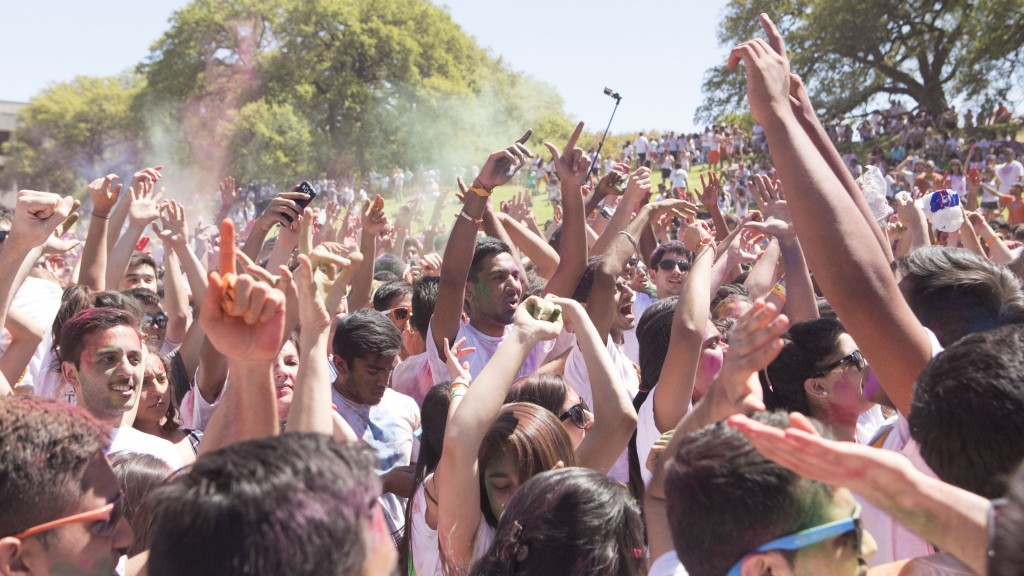 AUSTIN, TX – Colorful dust flooded the air while thousands gathered throwing colored powder as friends and strangers alike celebrated and danced to music on the lawn outside of the Lyndon Baines Johnson Library and Museum.

They were there to participate in Holi,a spiritual Hindu festival to welcome the coming of spring with vibrant colors honoring Lord Krishna, the supreme god worshiped across many traditions of Hinduism.

In Hinduism, Lord Krishna is the embodiment of divine joy and love that will destroy all of someone’s sin and pain. He was born to to establish the religion of love.

The tradition of throwing colored powder at Holi originates from the Hindu tale of Lord Krishna, who complained to his mother about the color of his dark skin. He believed it was unfair that he was so dark, so his mother then took color and put it on his and her face so they could look just a like.

Holi is  now celebrated as a festival of unit symbolically eliminating the differences that can drive us apart.

The colored powder that is used during Holi is from the flowers of trees that blossomed during the spring time.

On March 29, UT’s Hindu Students Association threw the biggest Holi festival since they started the event at the university. This year, approximately 8,000 UT students and people around the Austin area attended Holi.

The turnout was so successful that there were times throughout the festival that they would have to take 20 minute breaks just to get more colored powder.

Senior UT student, Crystal Nunez, has attended the Holi festival for the past two years. She says that every year she experiences an atmosphere filled with good people, good music, and good vibes.

“Why wouldn’t you want to come out?”

However, it takes more than just colored powder packets and music to showcase the annual Holi festival.

Holi Co-Chair Aparna Datta, says that they start planning the event a year in advance, because they needed a lot of time to get all the materials in order for the big day.

At Holi, everyone comes together to have fun as they celebrate the traditional festival in the Hindu culture.

Holi celebrator Anshumala Gupta says that Holi isn’t just a time to get together and have fun, but a time to wash off all the hatred.

“You are meant to forget all of the past and and actually hug people with a pure heart again,” said Gupta.

The Hindu Students Association, the organization behind the event, meets weekly to discuss the concepts a practices of  their shared religion. Every week a different pair of officers lead a discussions based on Hinduism topics suggested by the members.

HSA President Aneesh Angirekula, says that being a part of the organization is all about the people he is surrounded with.

“No one is an expert, we can all learn from each other,” said Angirekula. “So I really enjoy that aspect of HSA, I feel like I learn a lot more from my peers around me oppose from the two people who did research.” 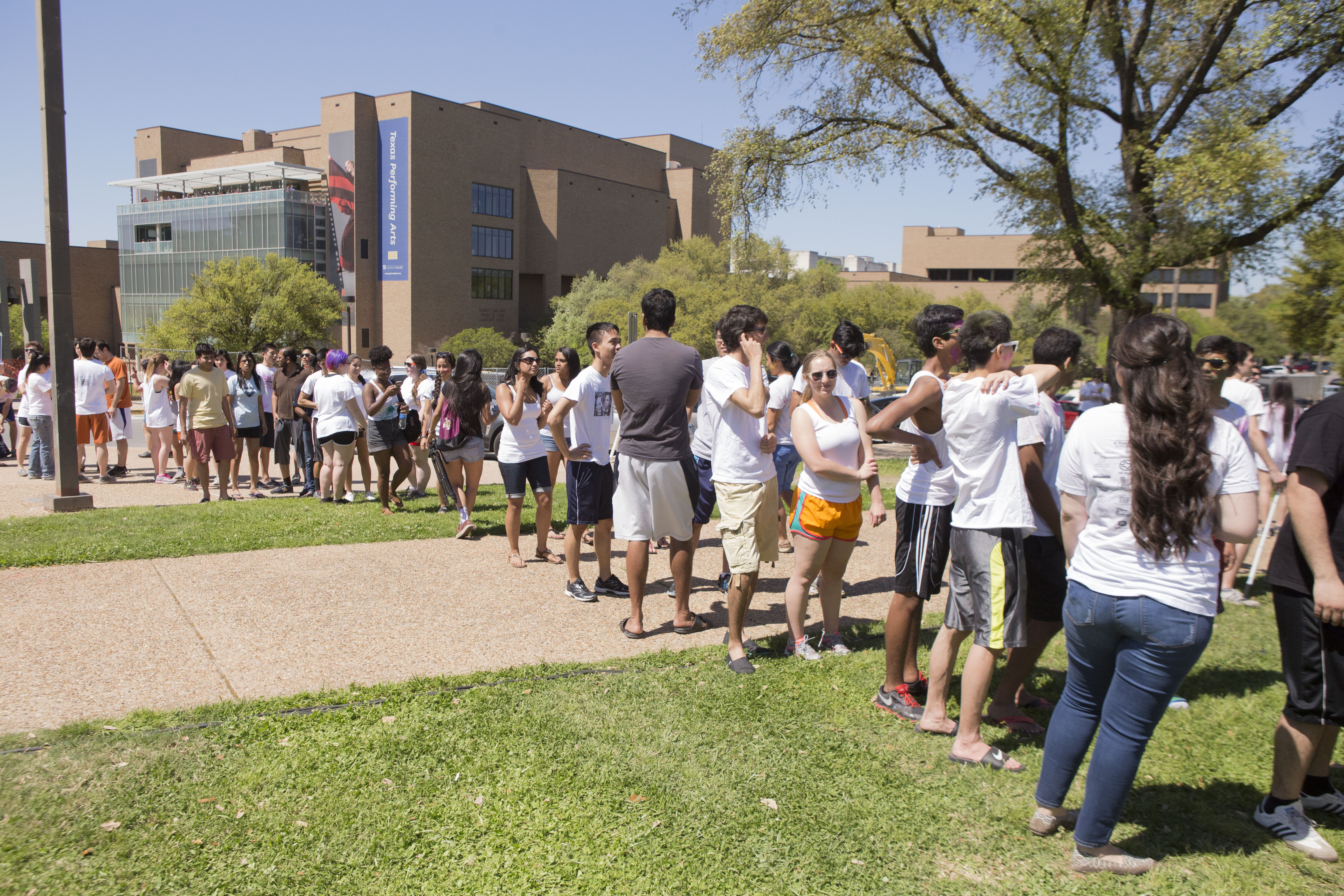 Students stood in line for about thirty minutes, as they each waited to get their own powder-paint packet. 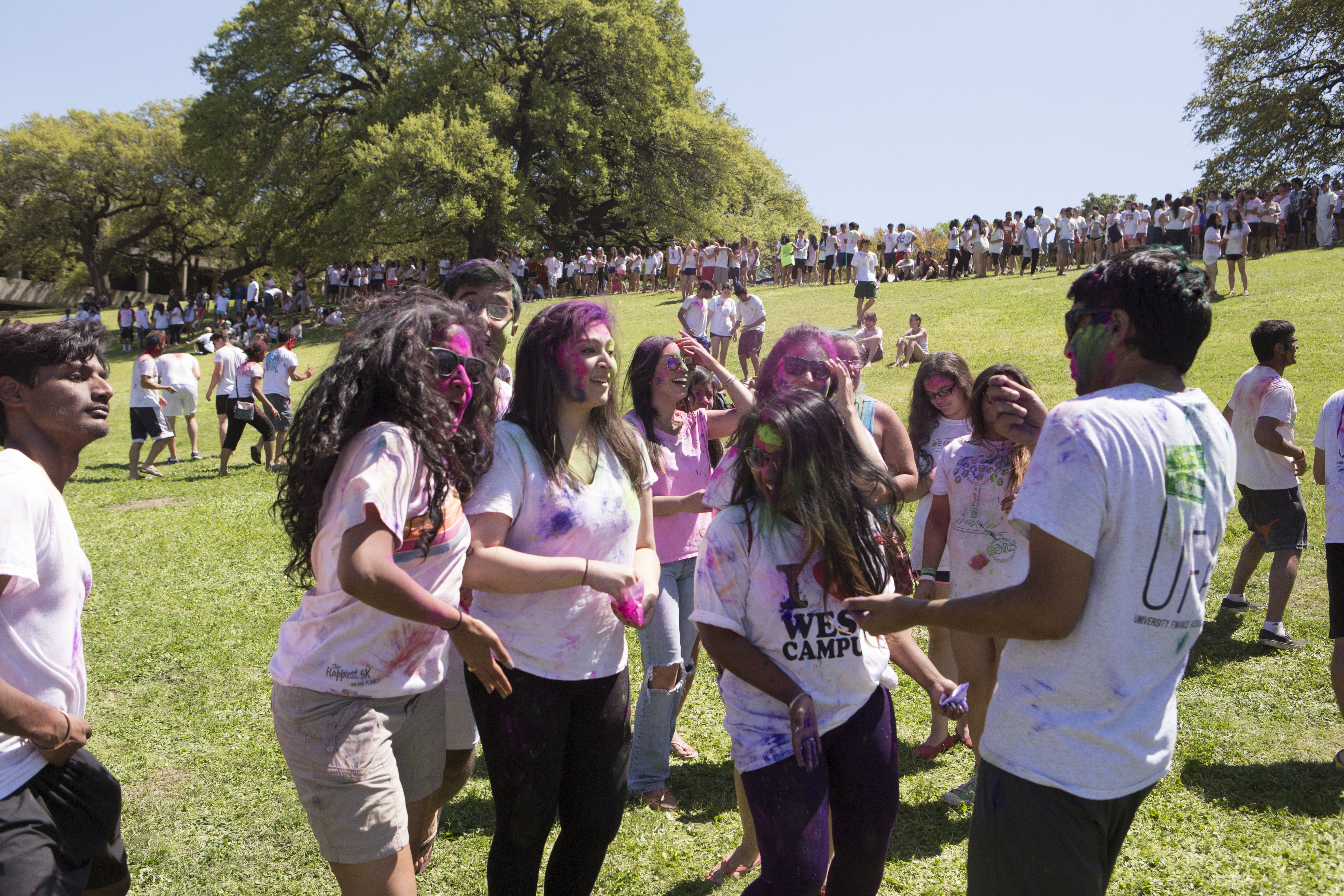 Many students danced away to the music while throwing powder paint on each other. 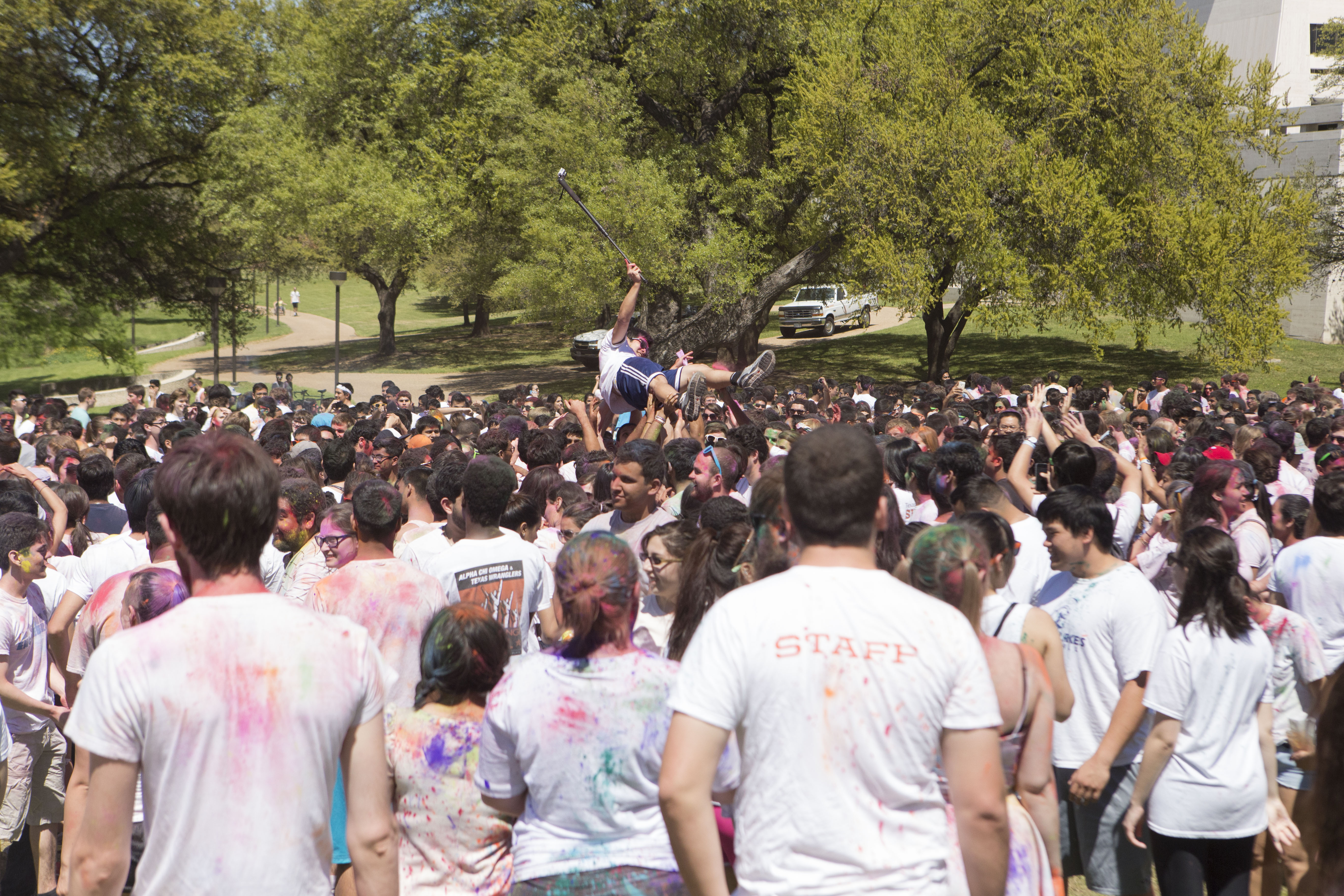 Numerous of students crowed surfed through out the event of Holi. 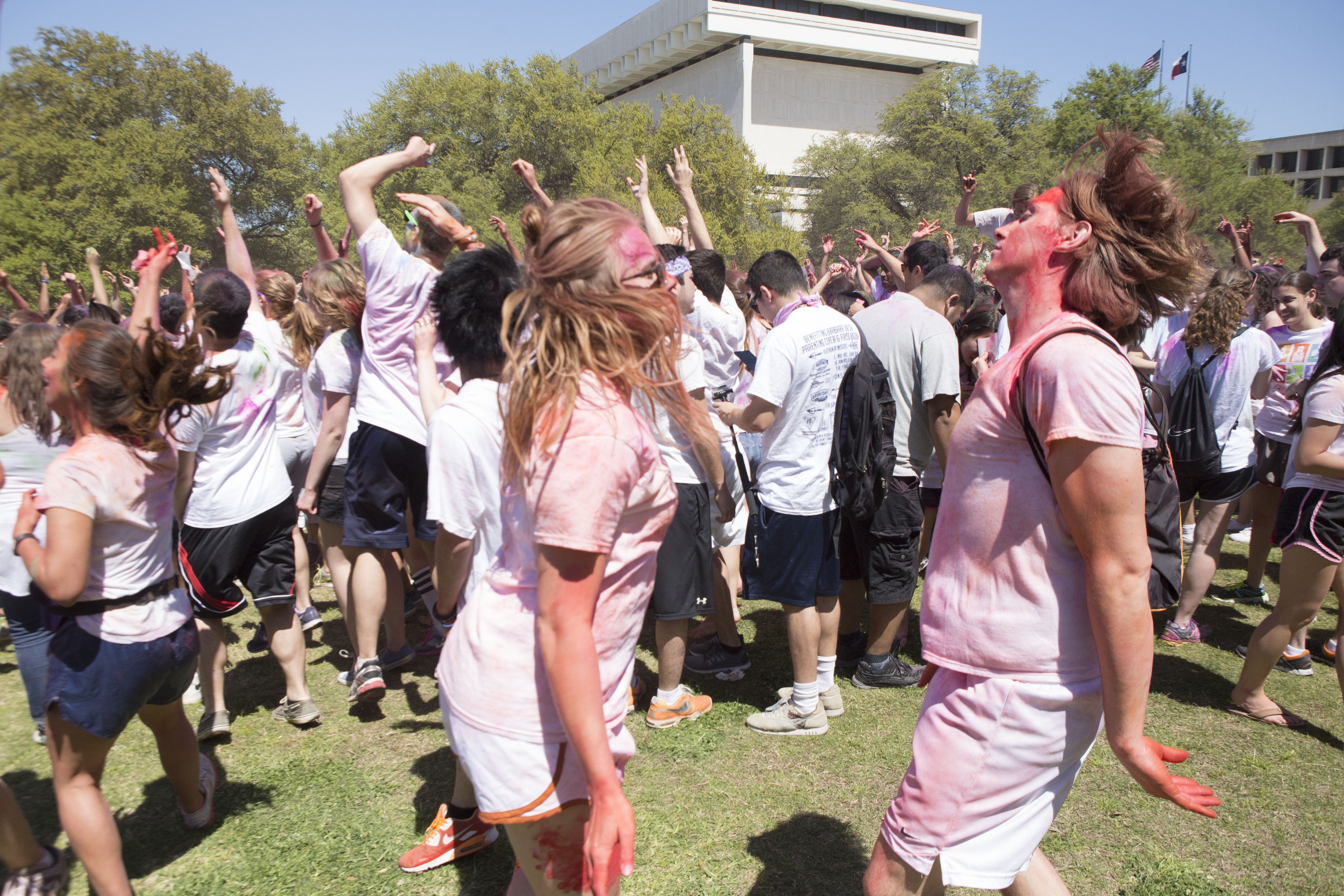 While some were tossing powder paint on each other, others were simply dancing the day away. 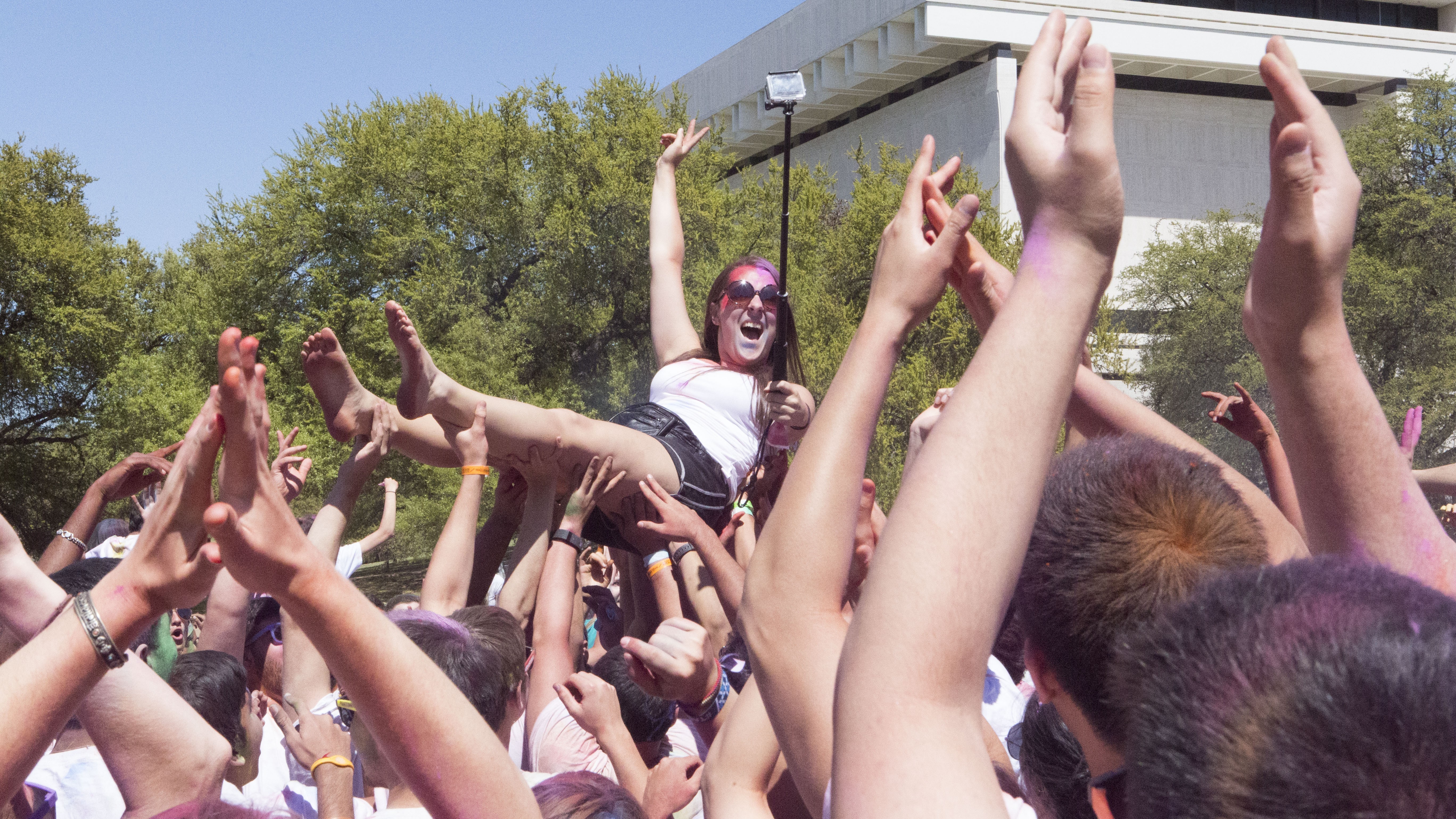 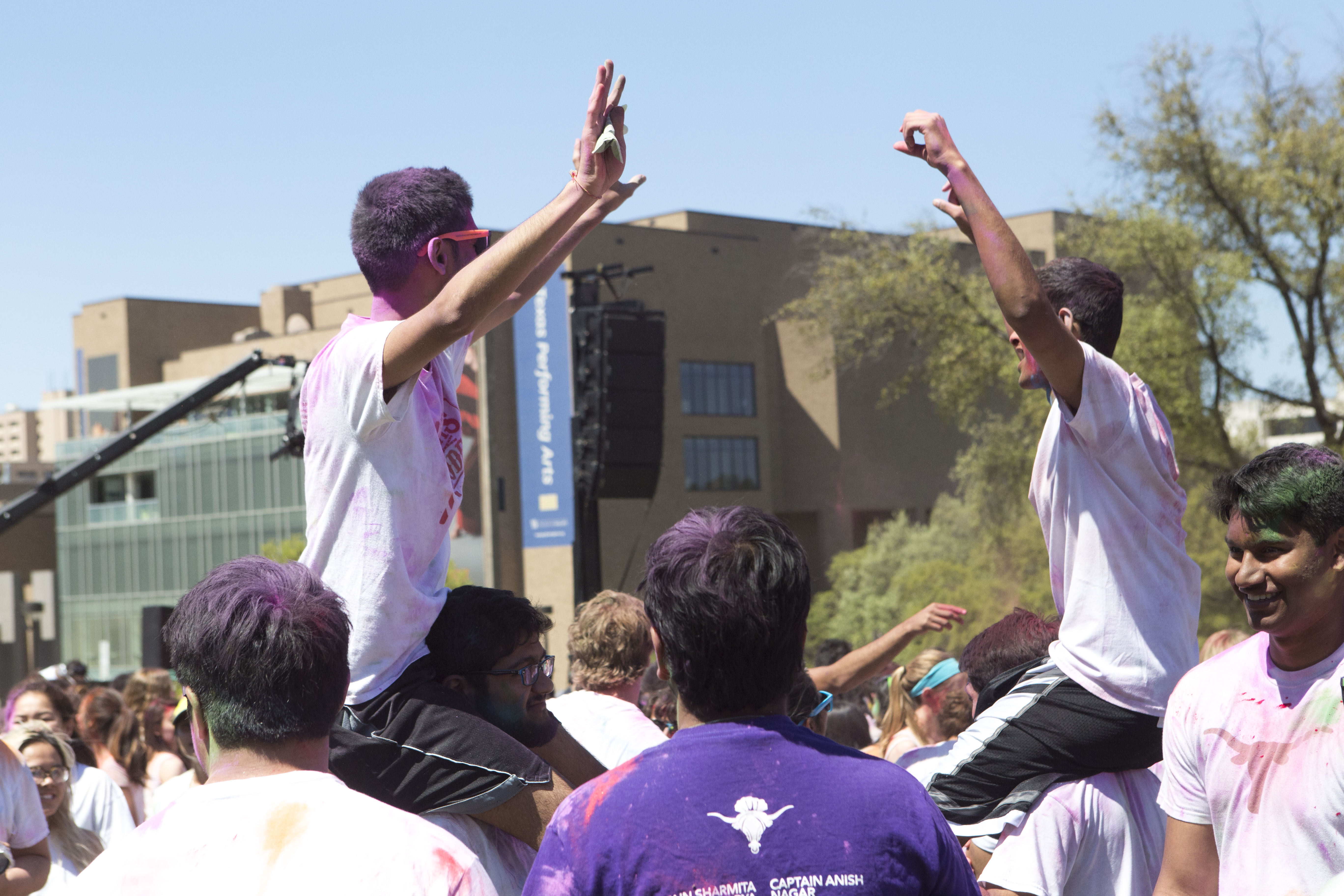 Aside from crowd surfing, students picked each other up on their shoulders to continue celebrating, Holi. 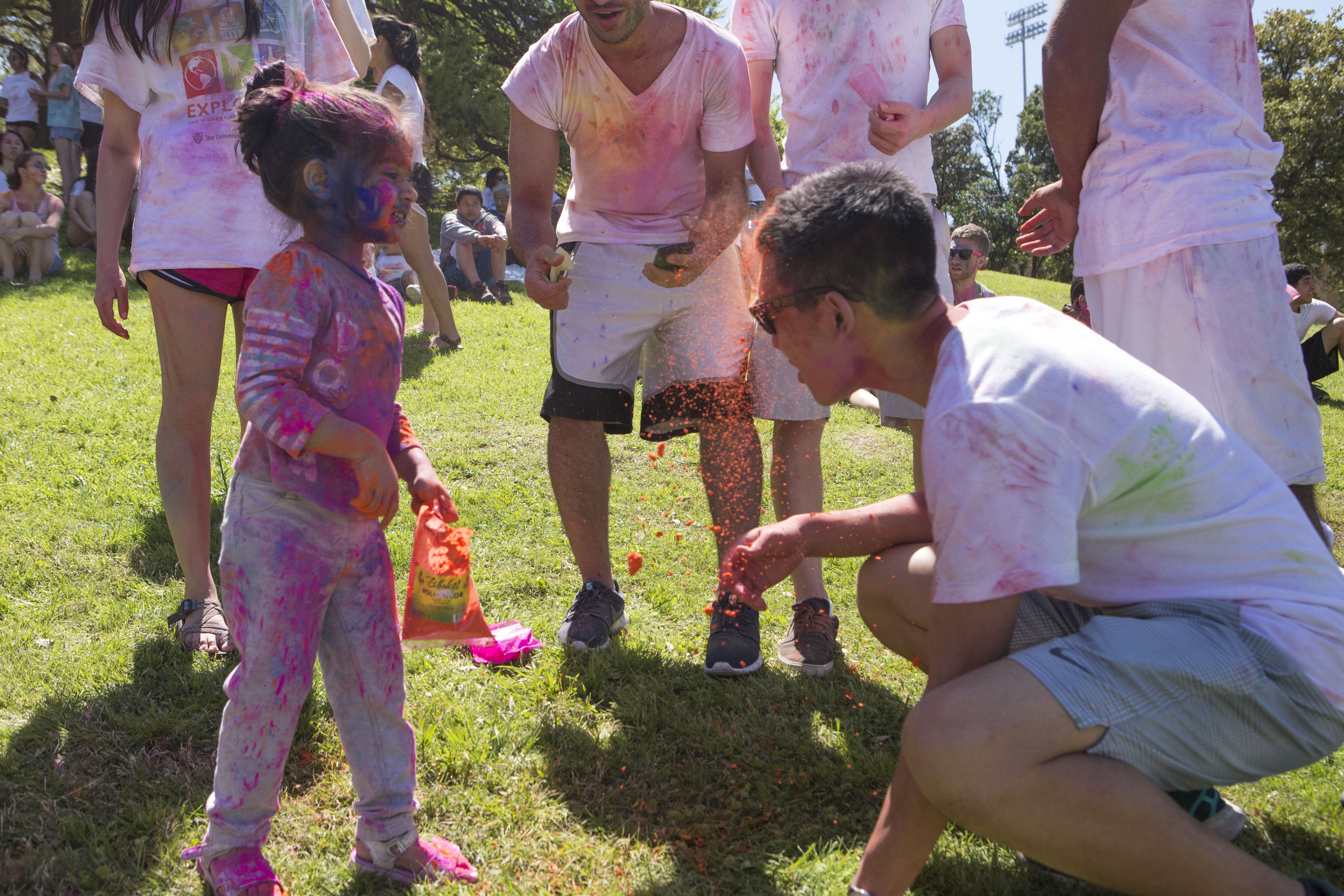 At this year's Holi, the age of people who attended ranged from kids to adults. 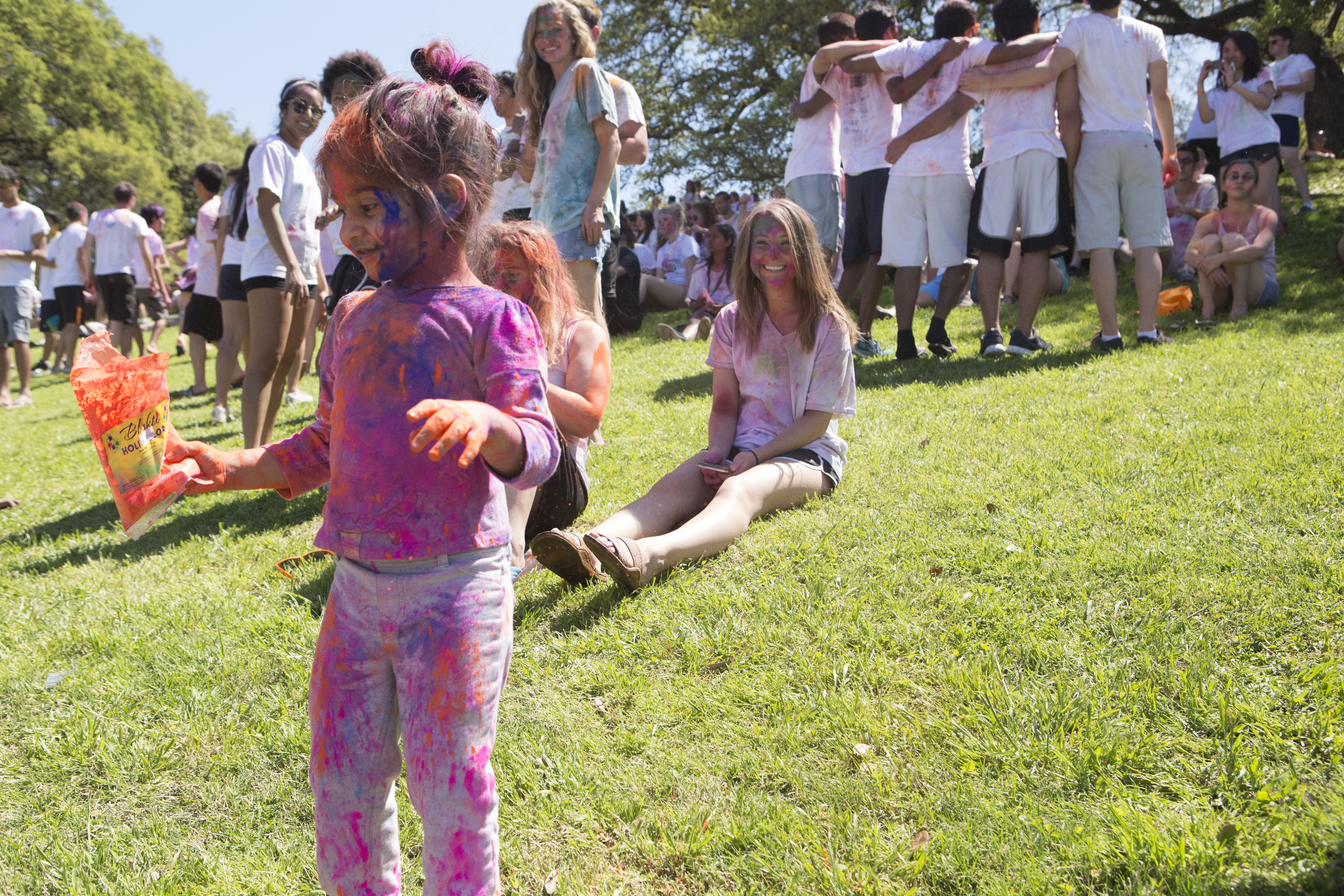 For the past years, Holi has been held in front of the UT tower. This year, the event was held outside the LBJ library. 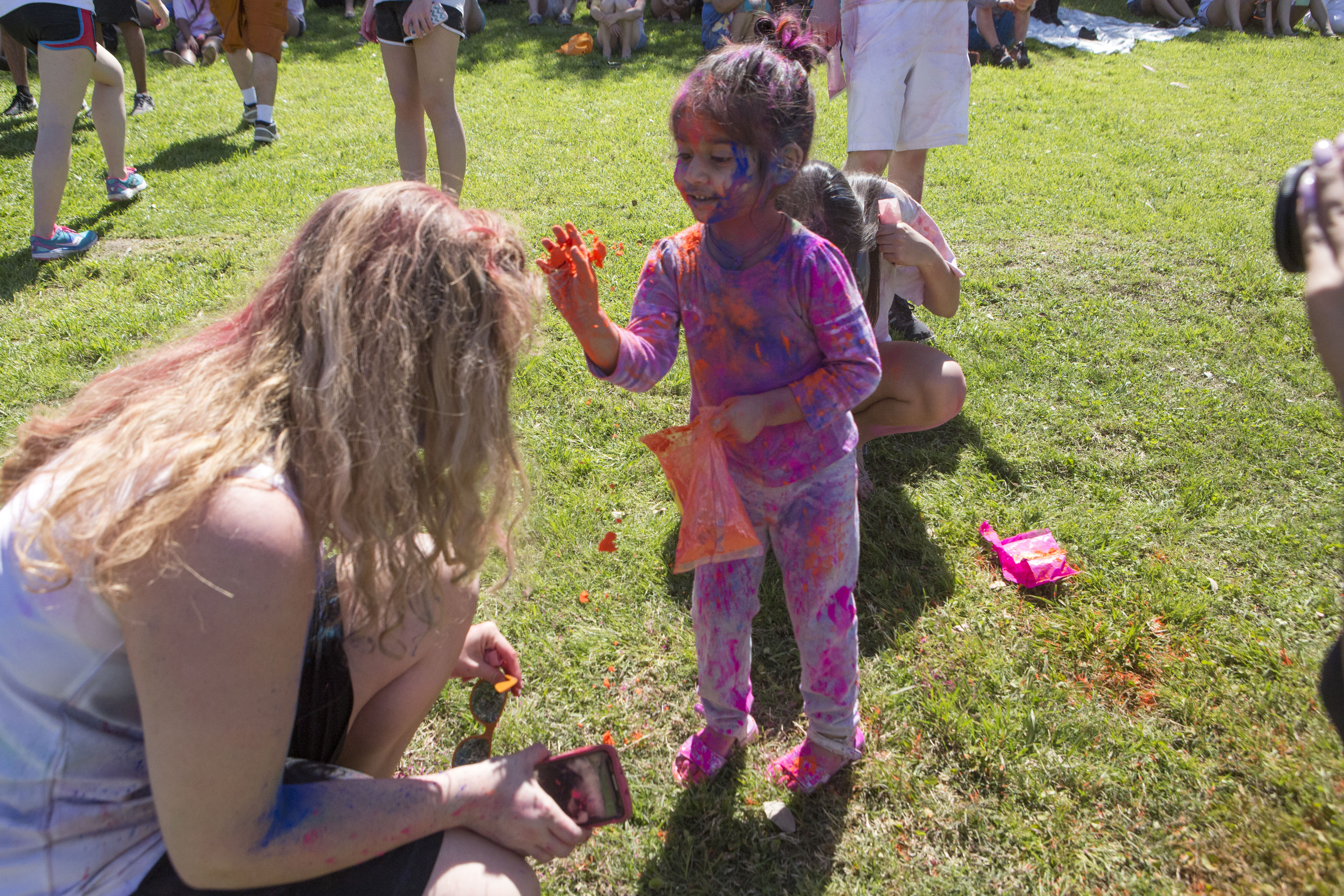 While some attendees ran away from the colored powder, others, voluntarily agreed to have a little more fun. 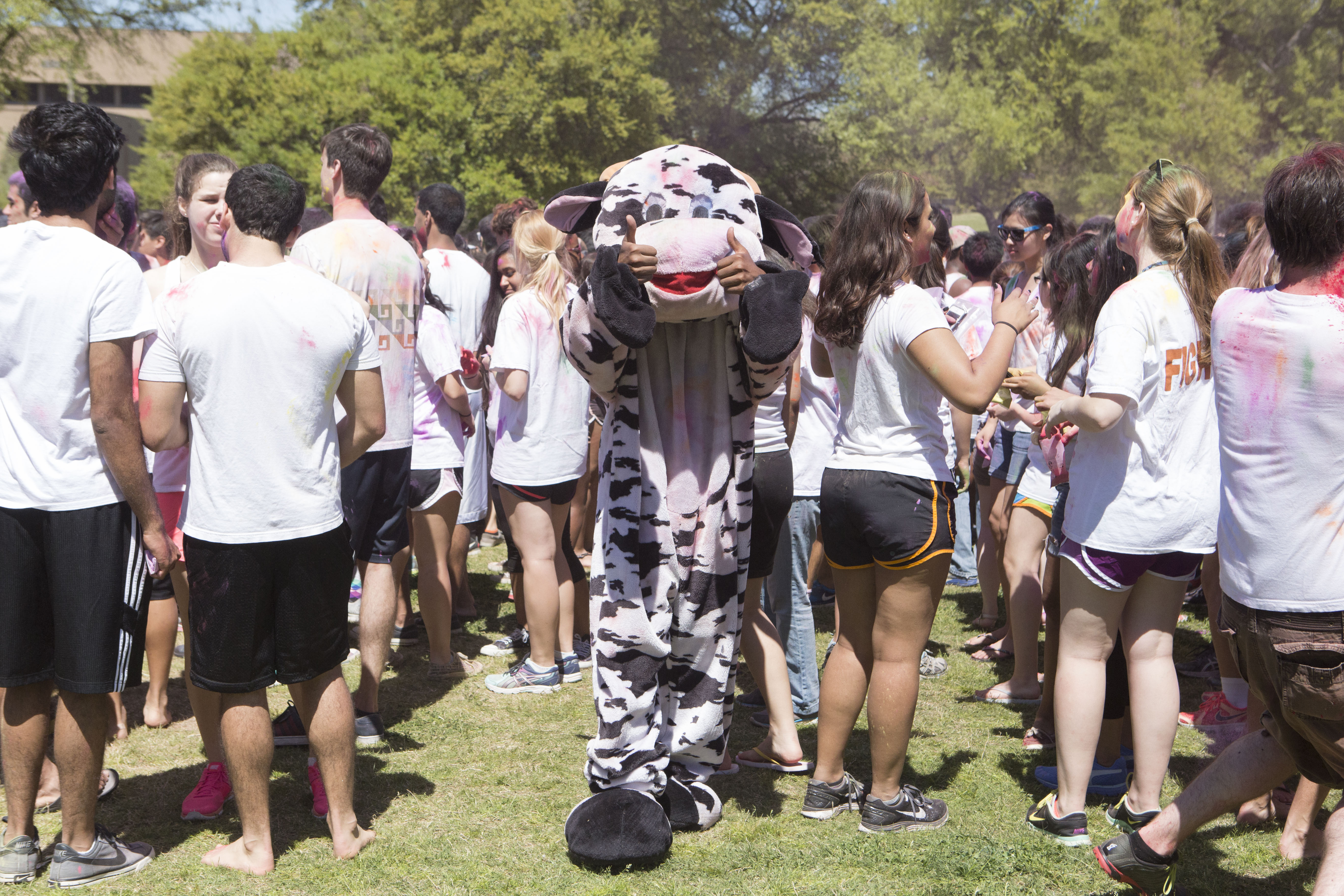 HOLI-COW! This year's Holi mascot was dressed a cow. 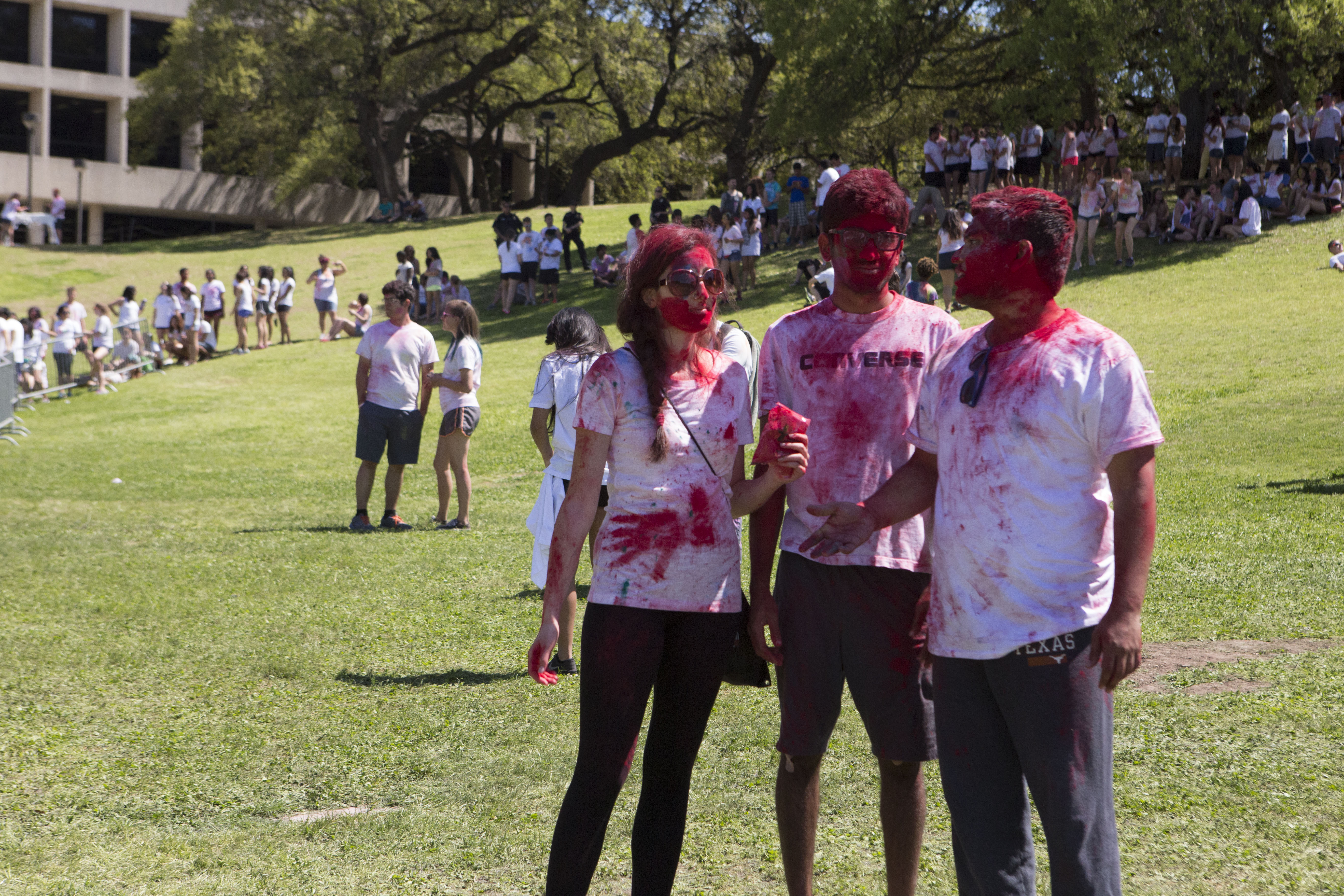 The after effects of red powder paint on UT students. 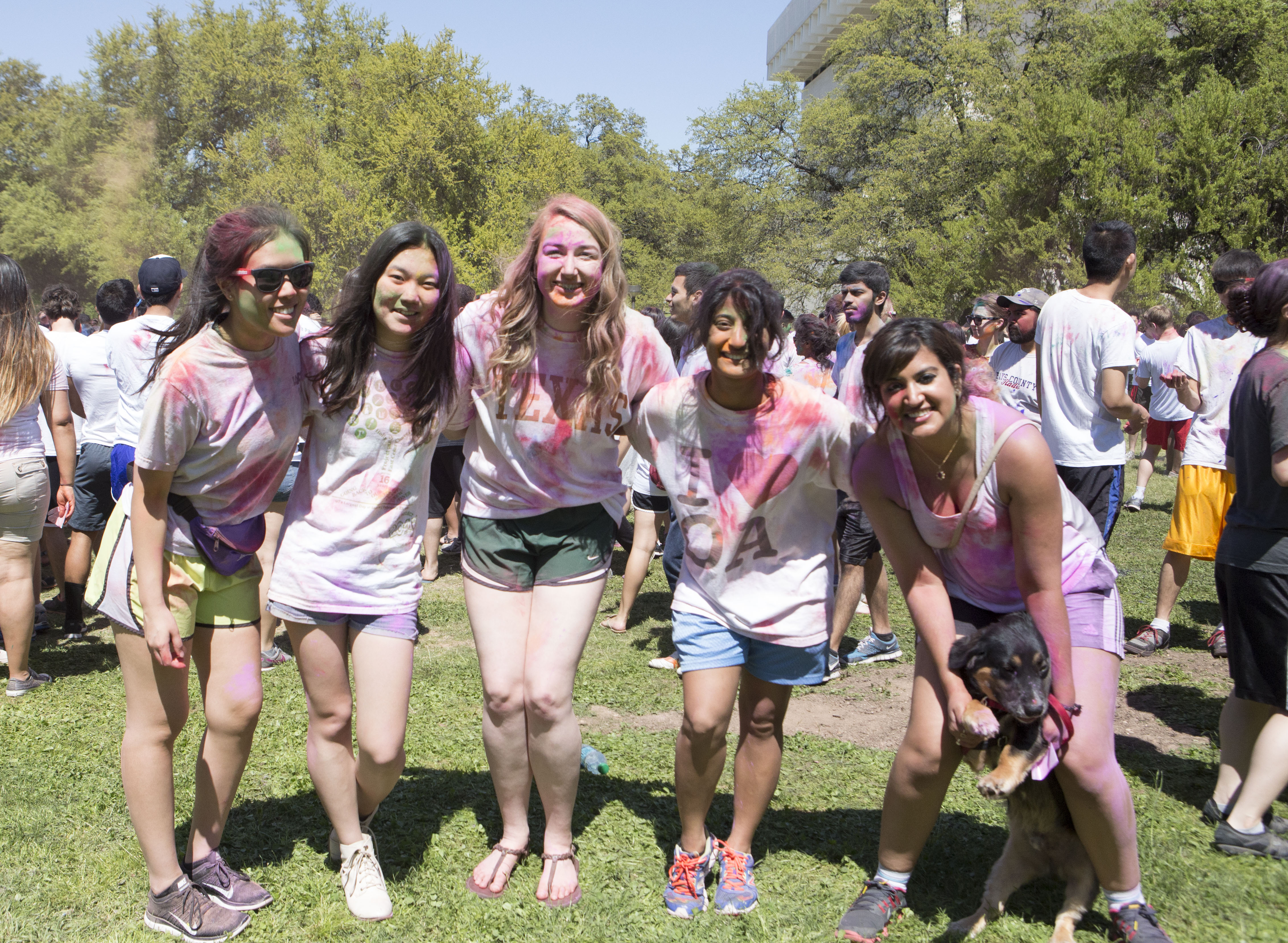 Friends gathered together to pose for a photo at this year's Holi 2015 Event. 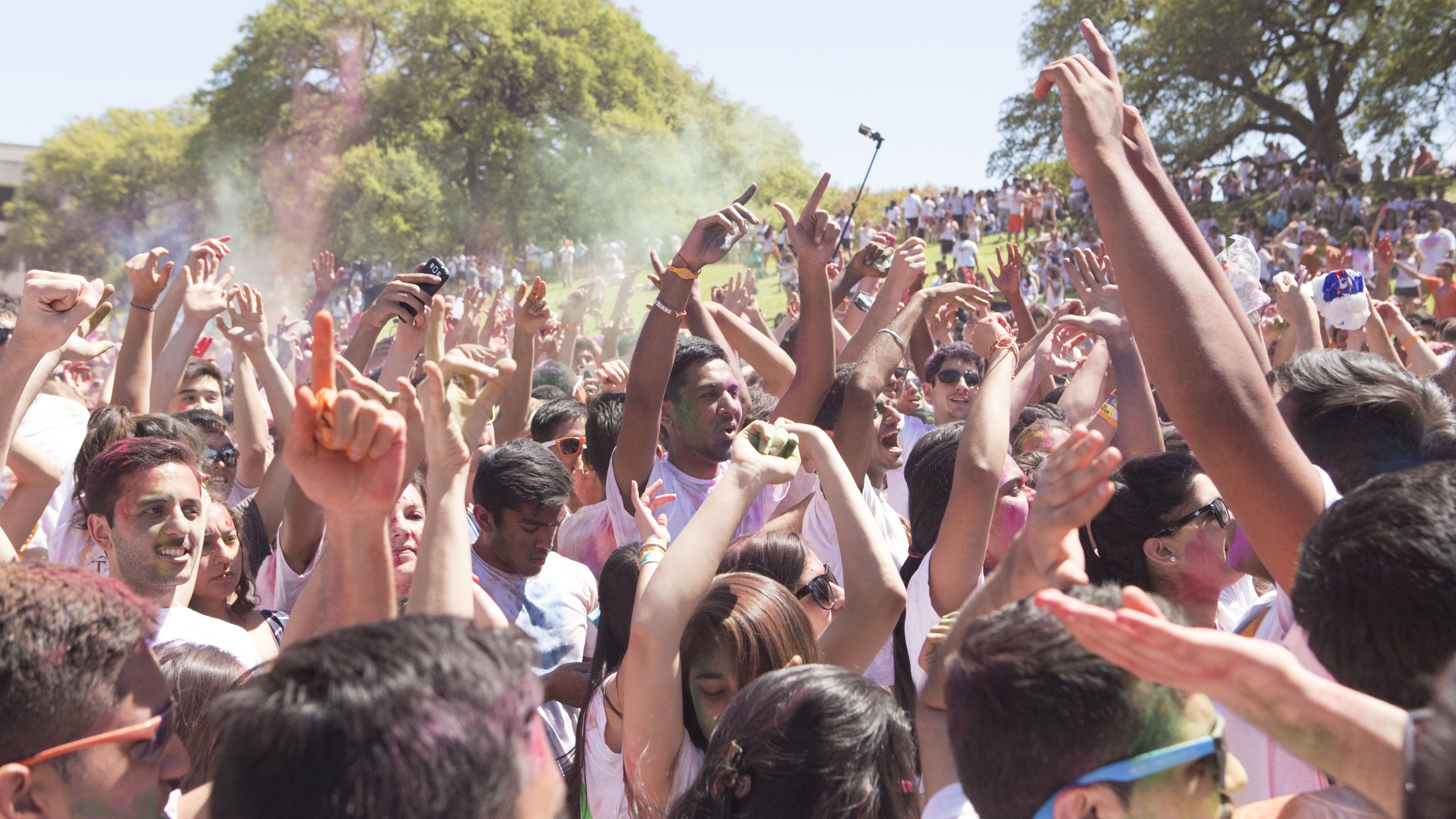