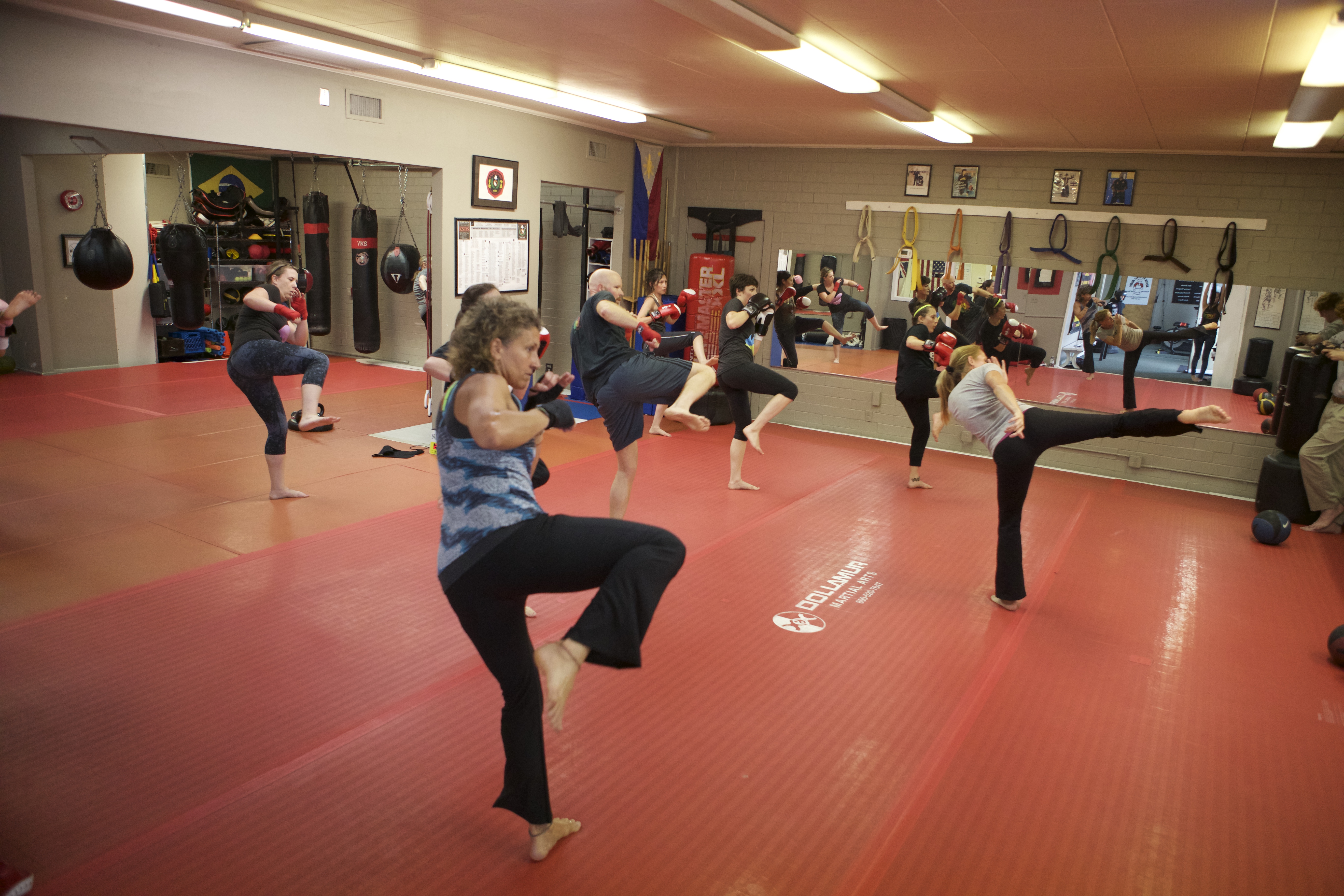 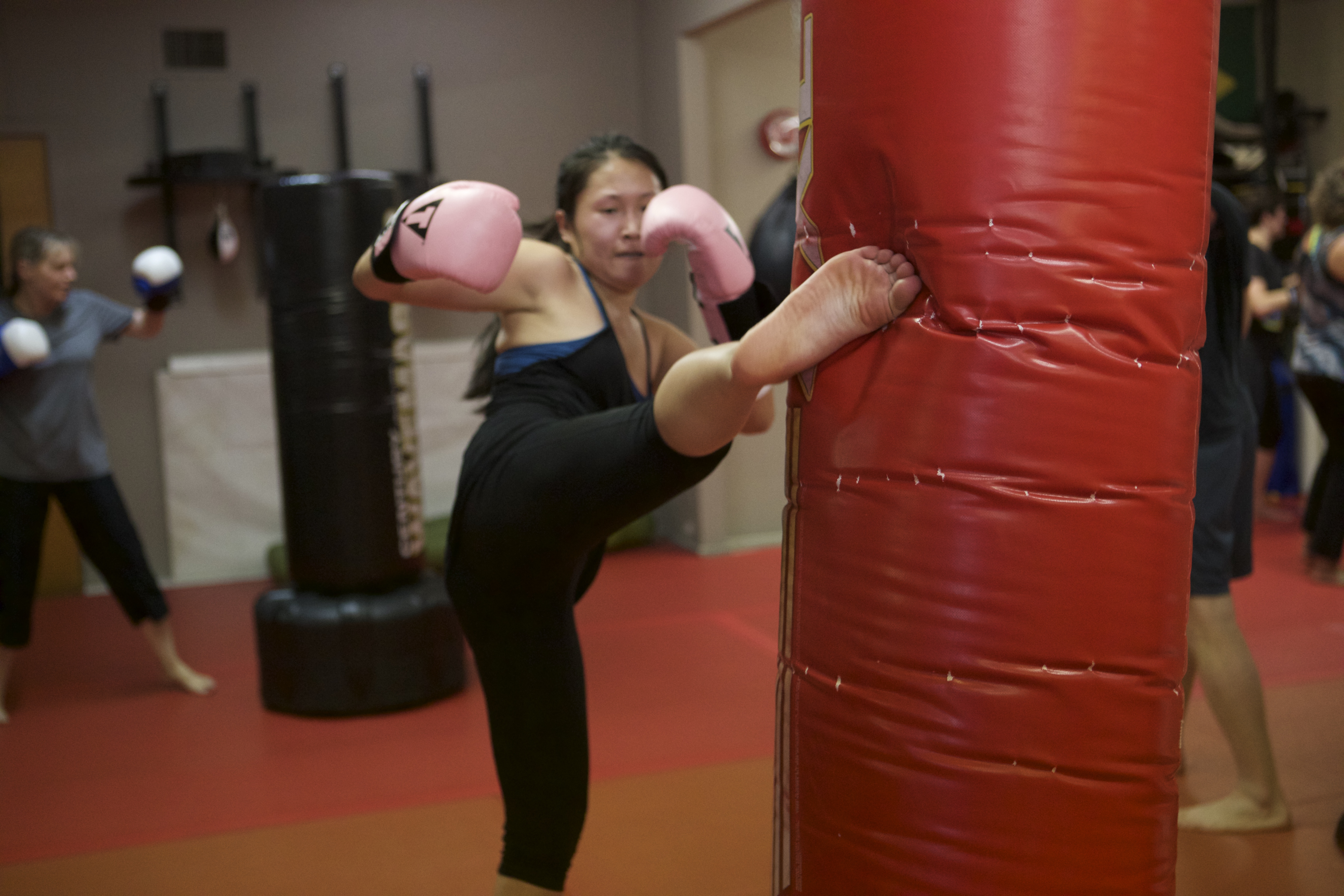 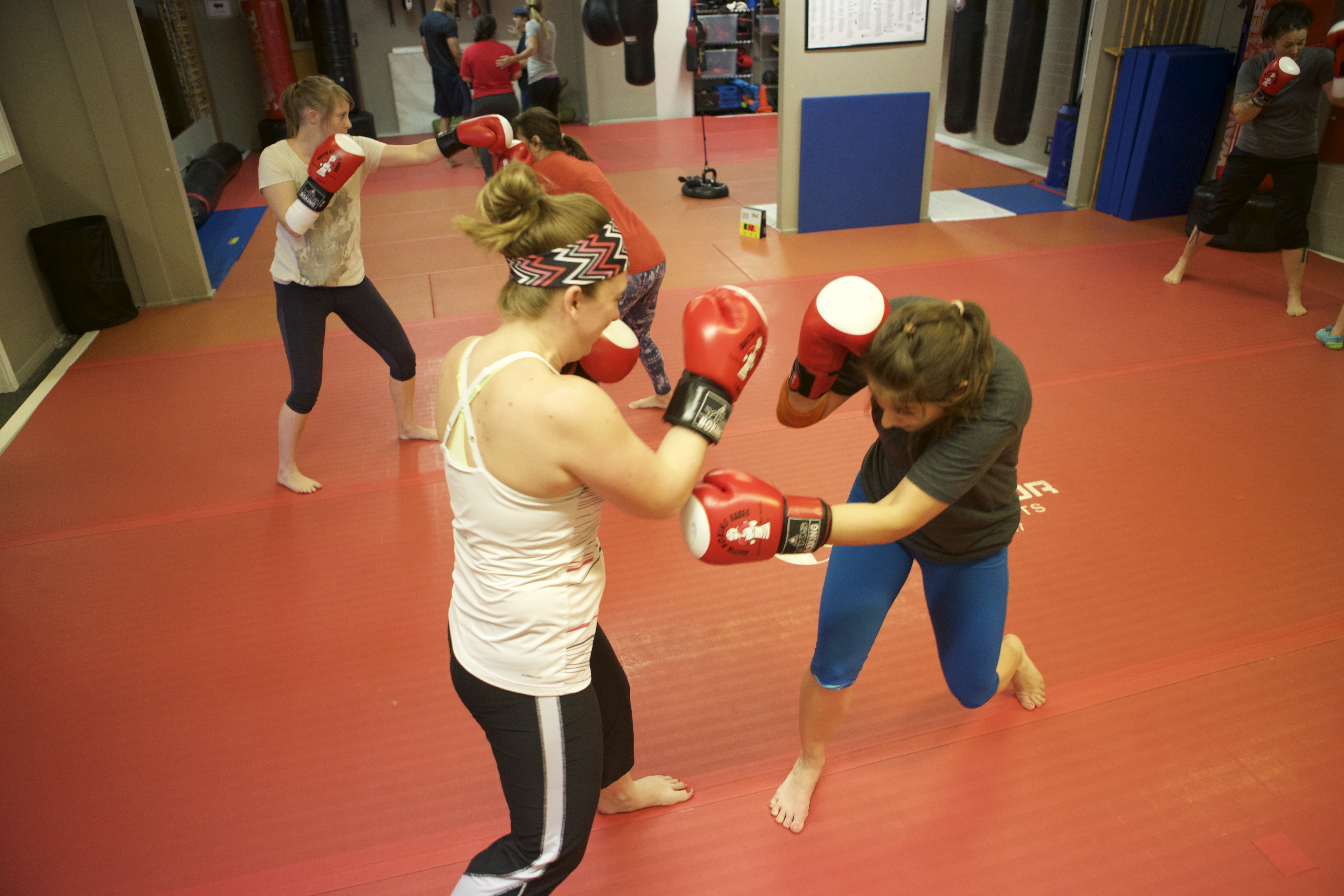 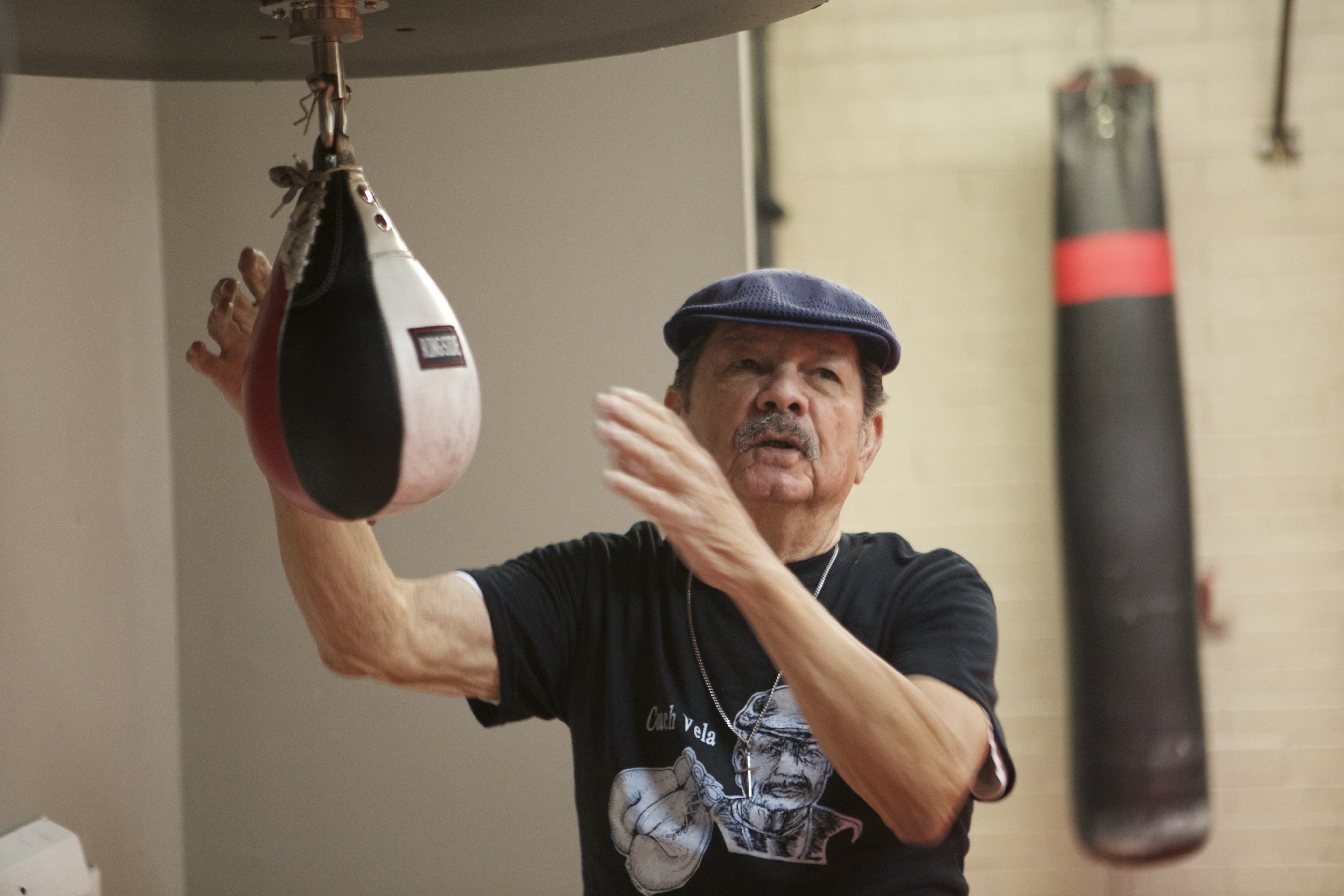 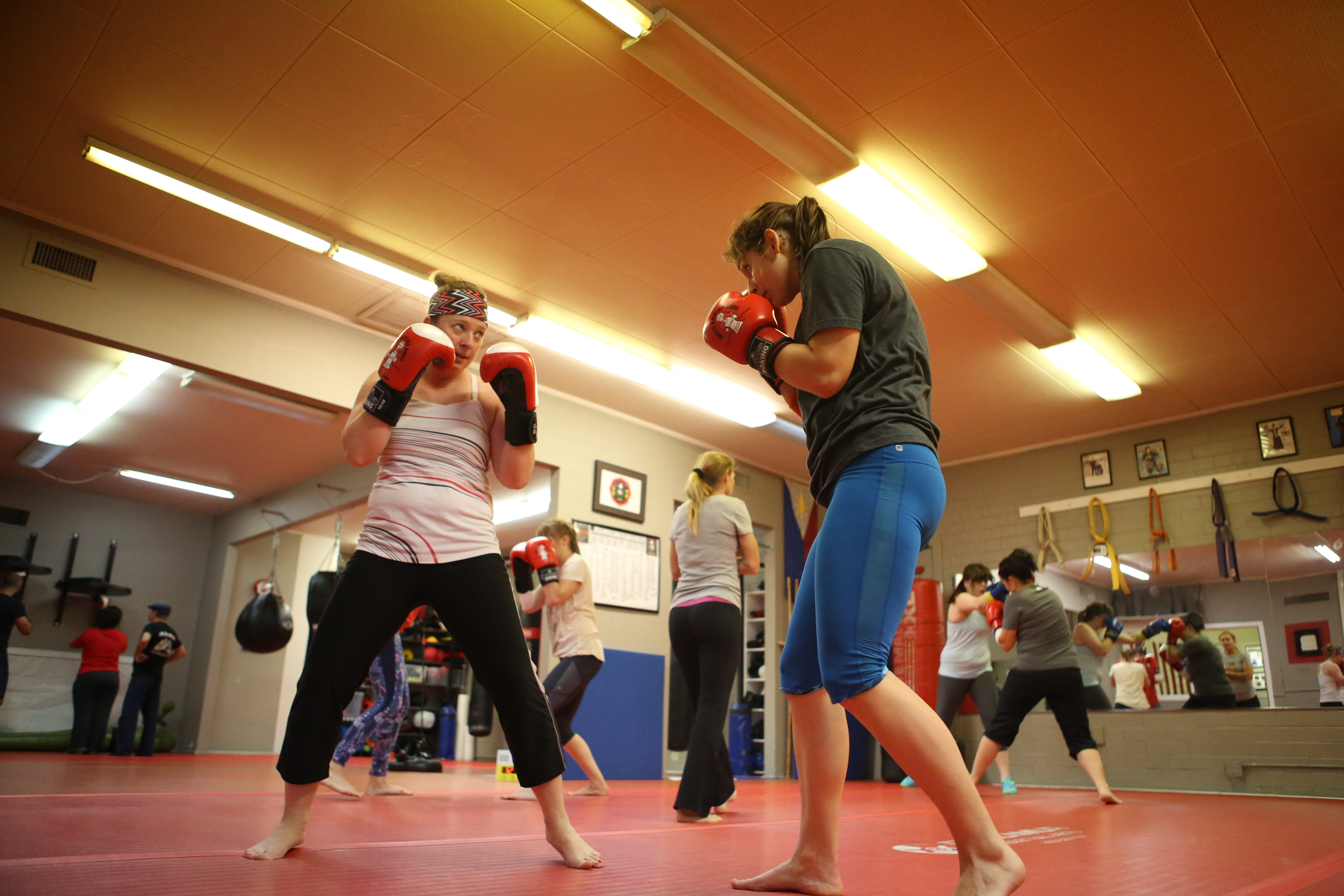 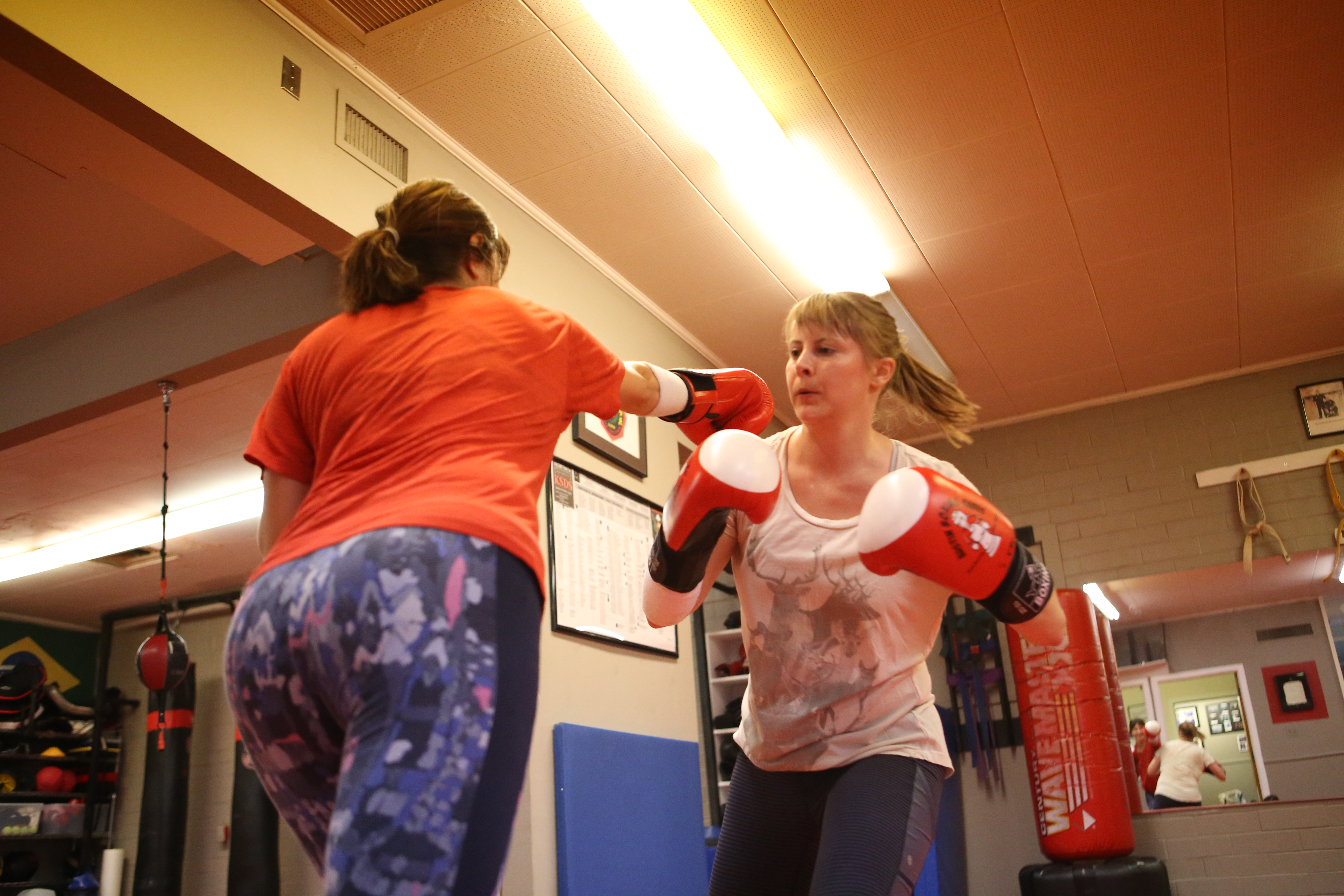 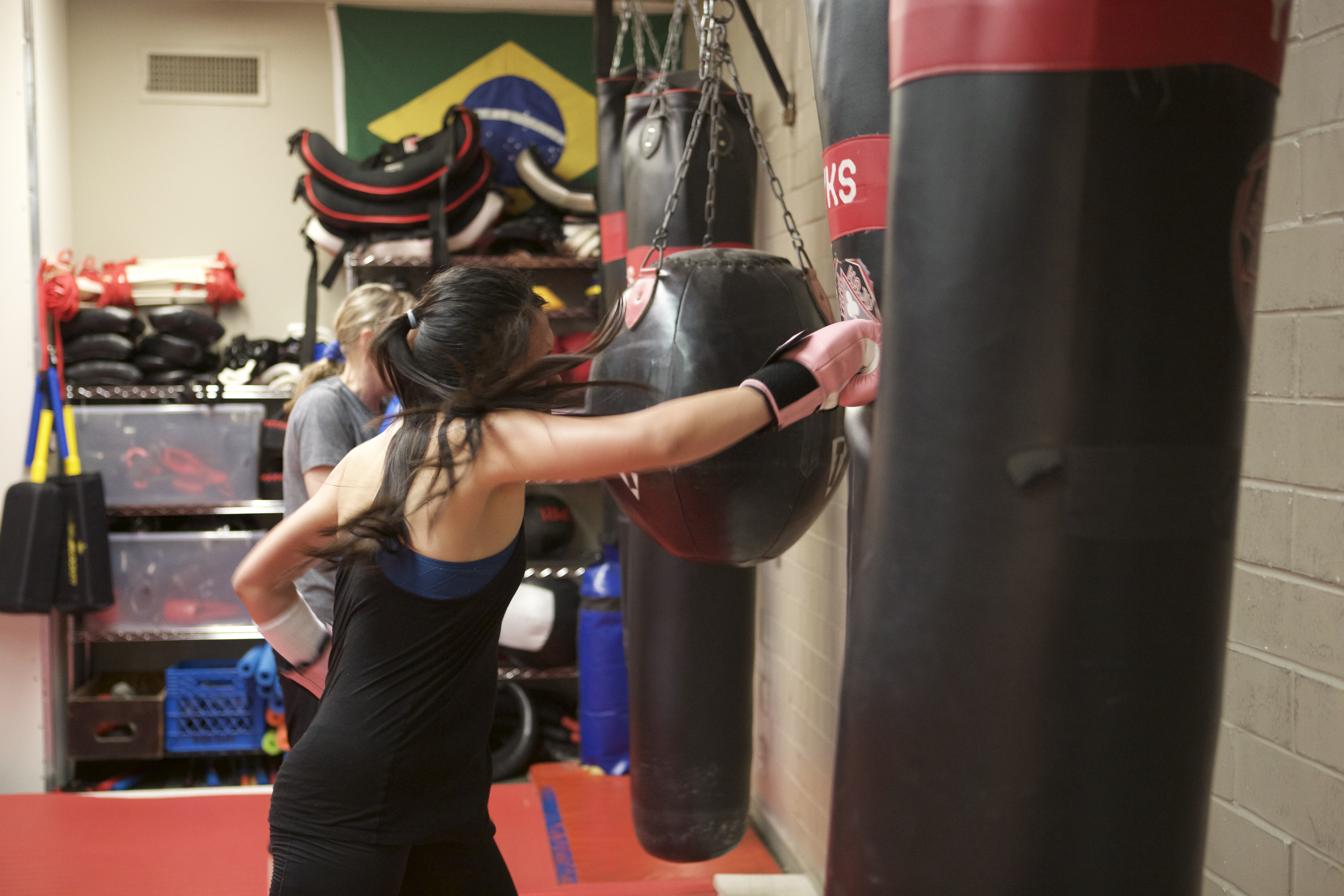 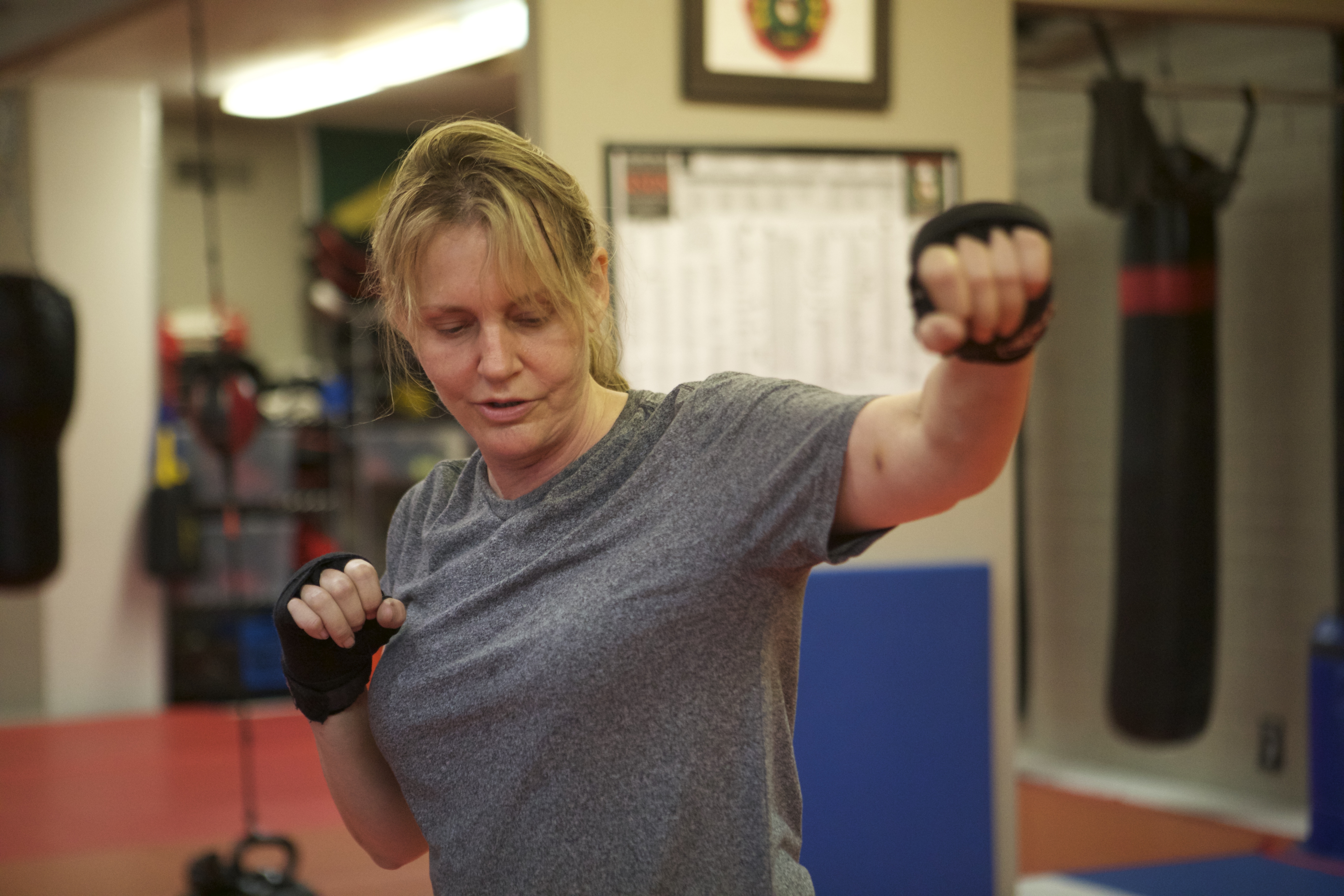 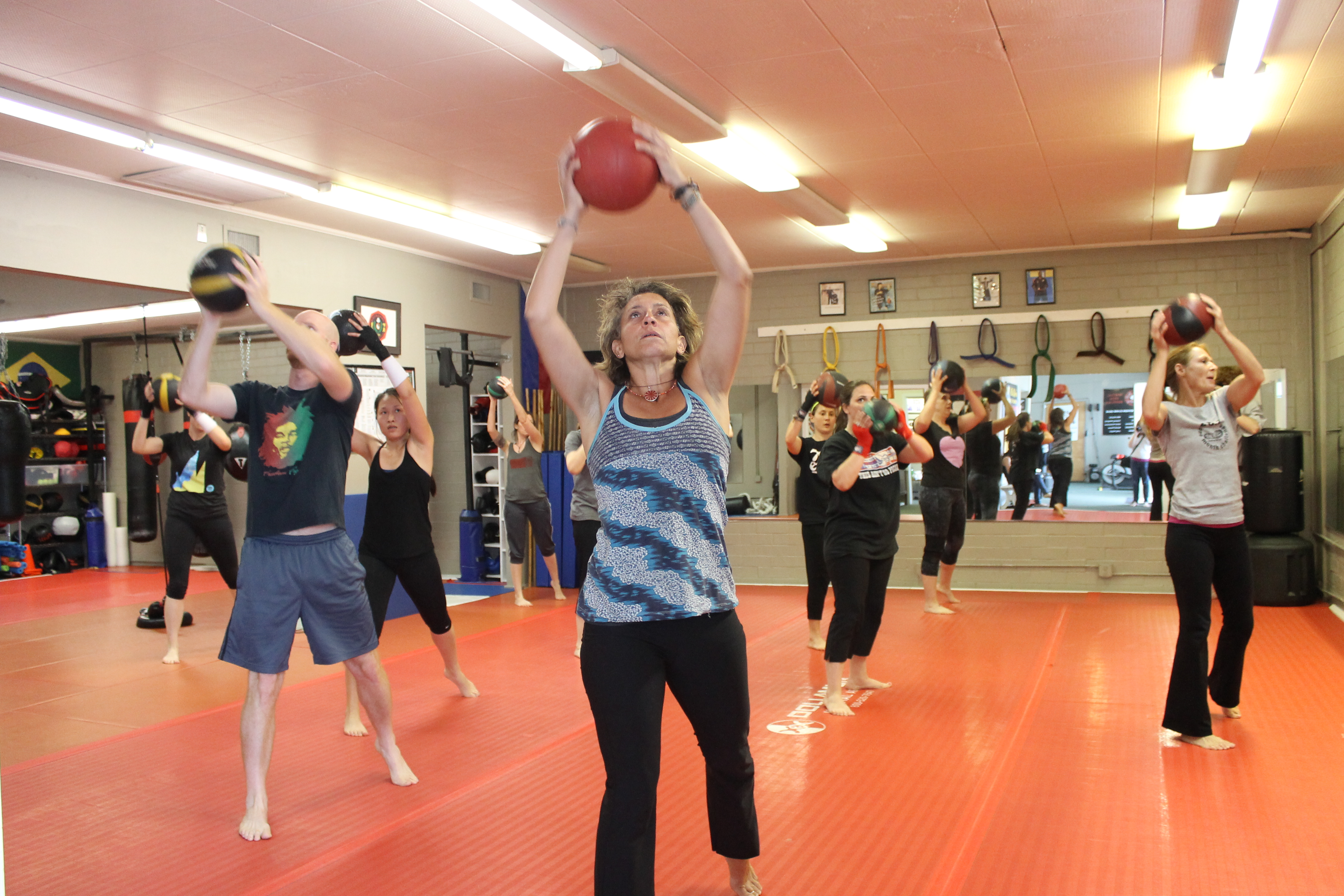 Kickboxing class starts with some exercises with a medicine ball. Here, the class is stretching. 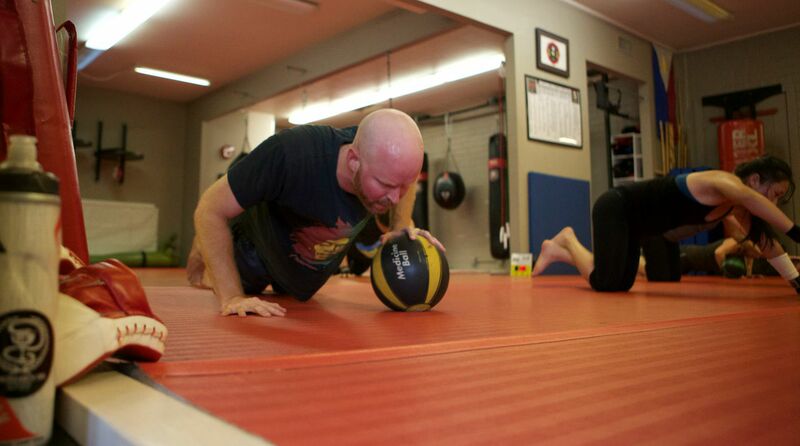 Students do push-ups with a medicine ball. 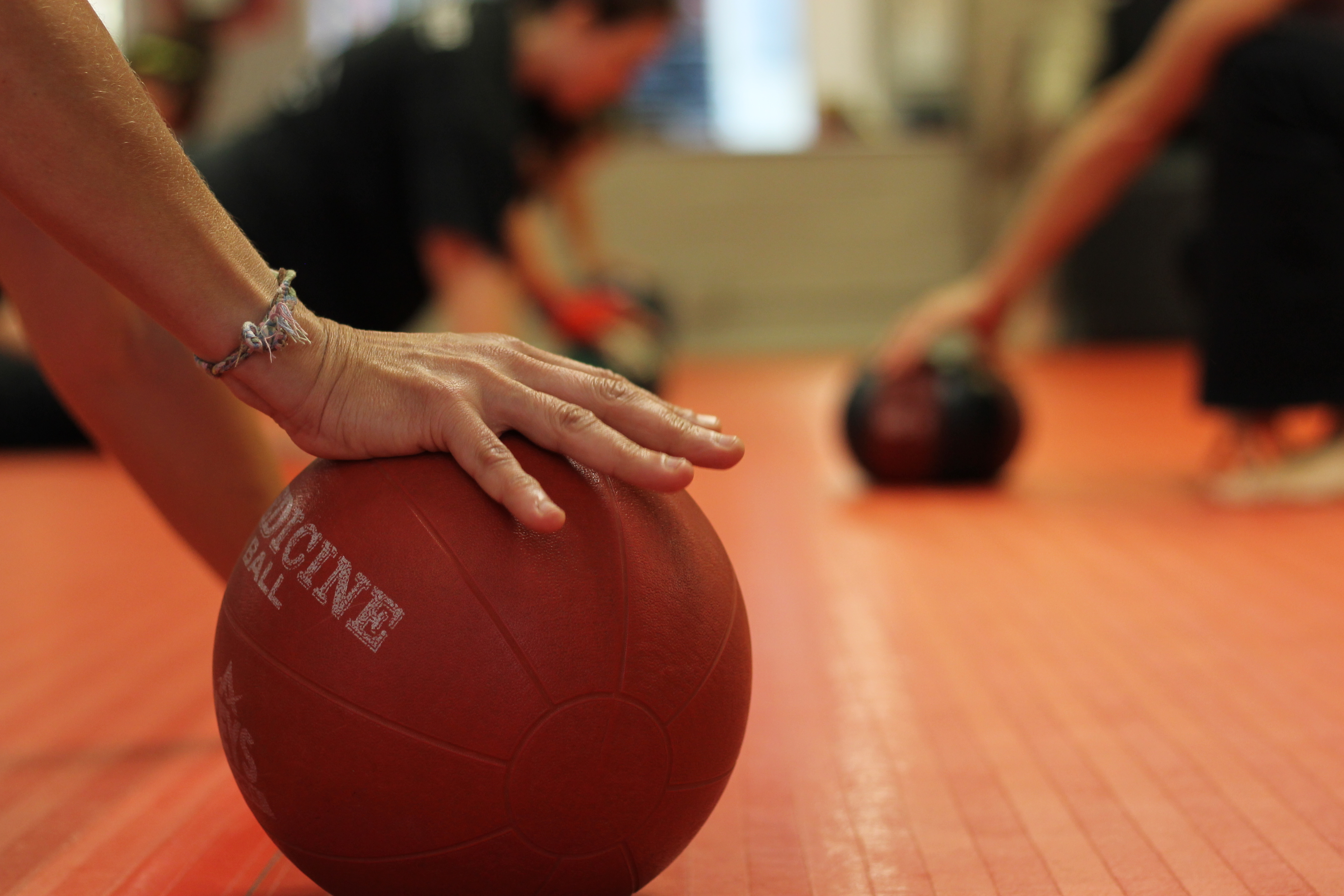 Instructor Julia Gschwind demonstrates how to do the next excercise. 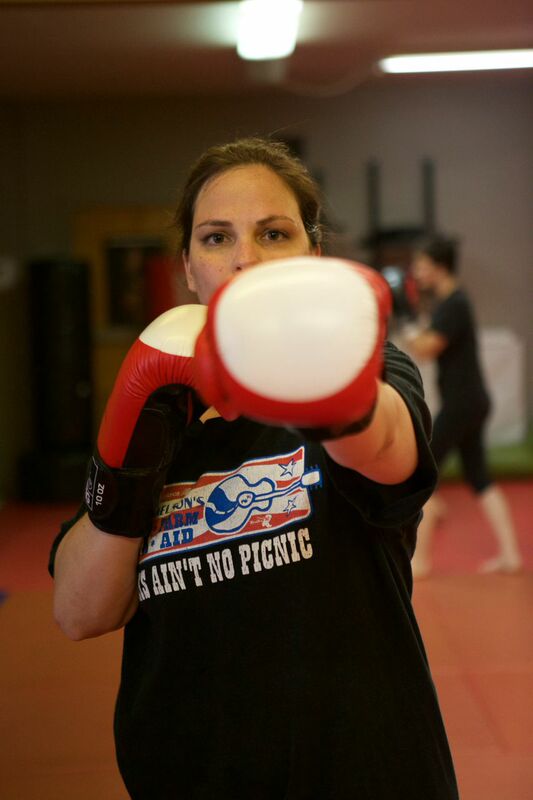 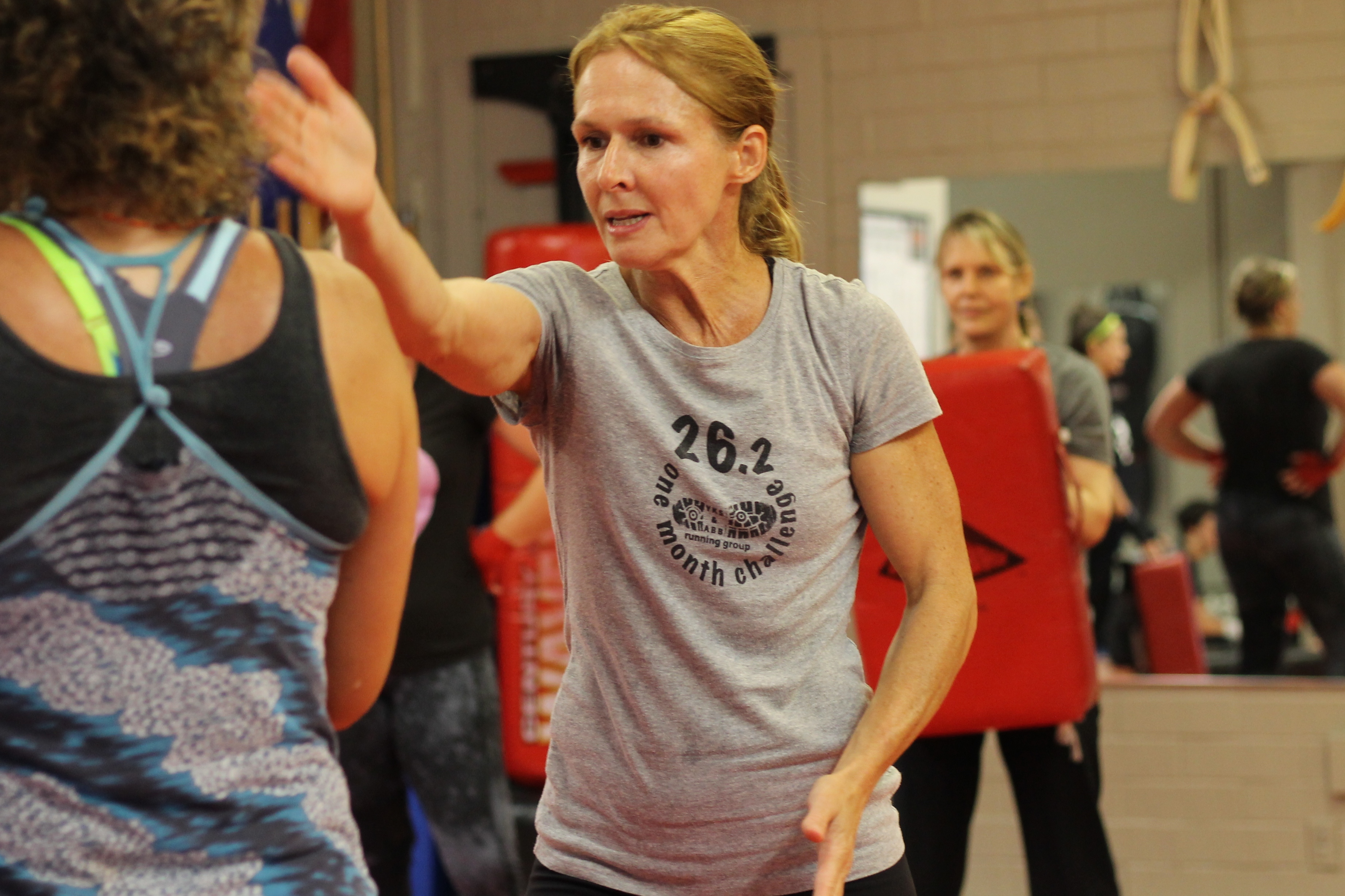 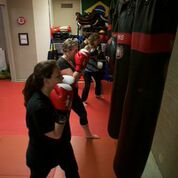 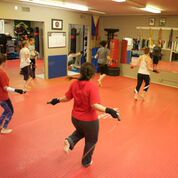 The women’s boxing class warms up by jumping rope. 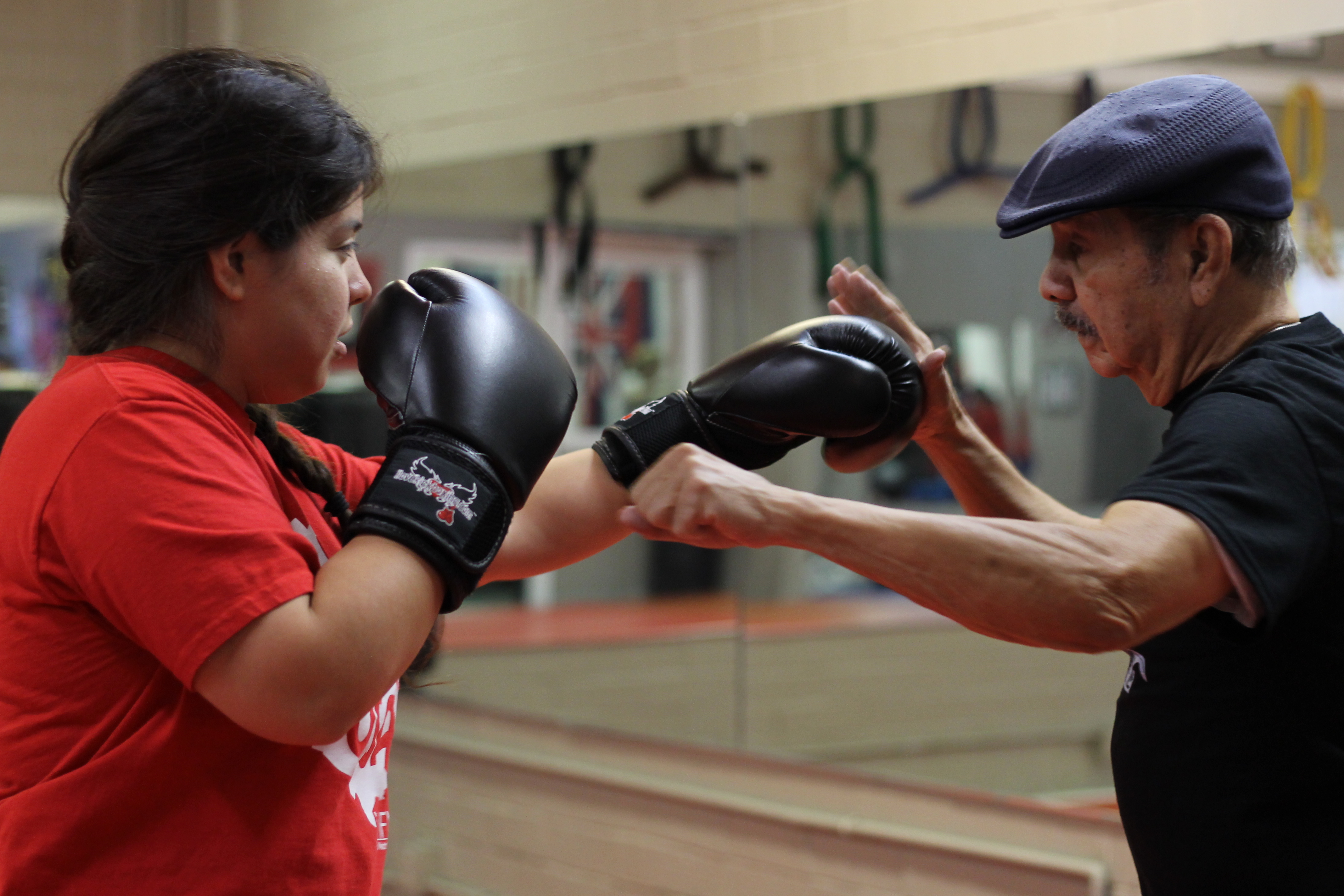 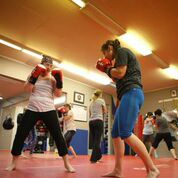 Two experienced students practice sparring while focusing on their footwork and punches. 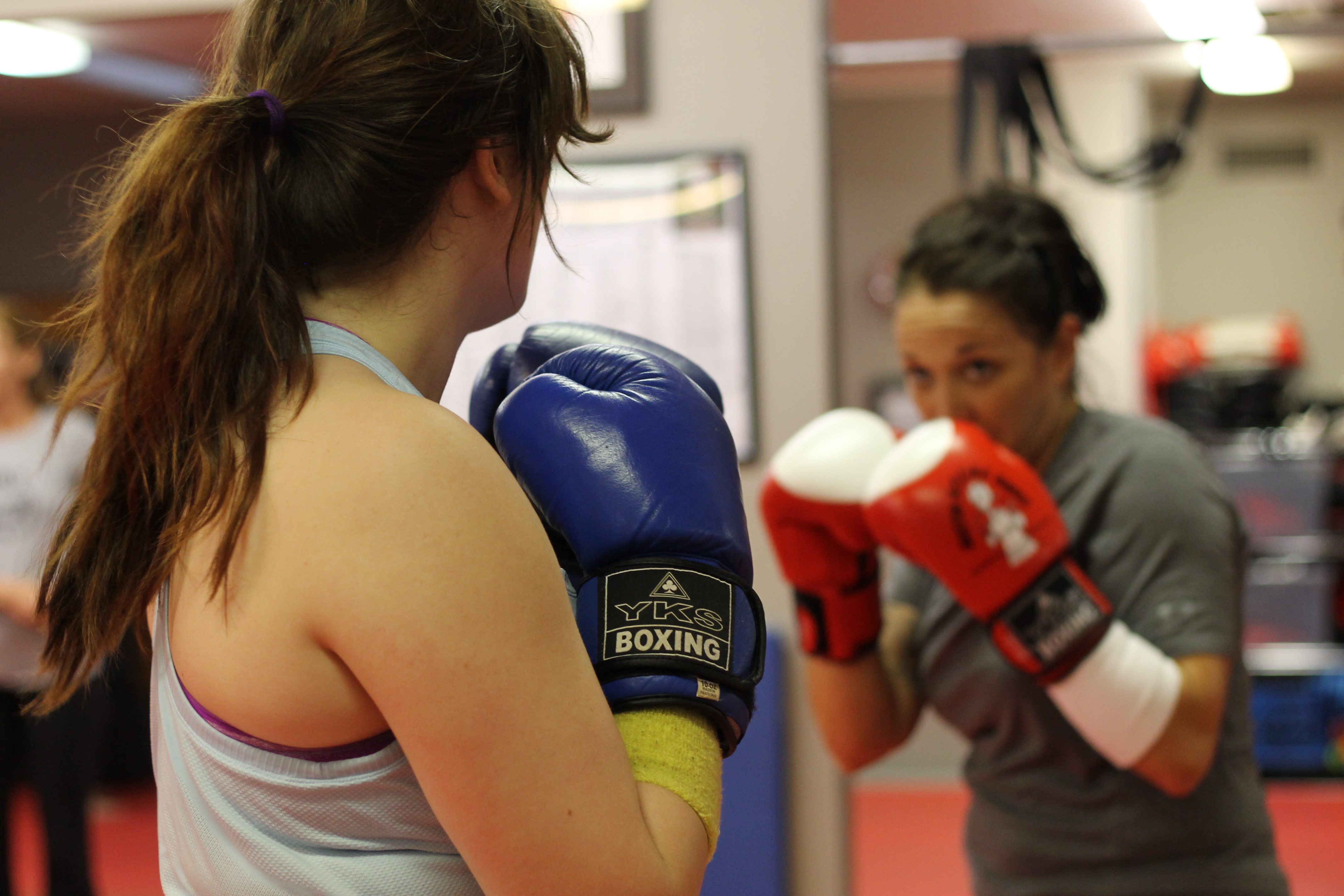 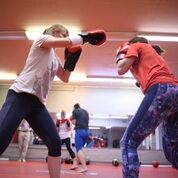 The class is divided into partners to work on various techniques. 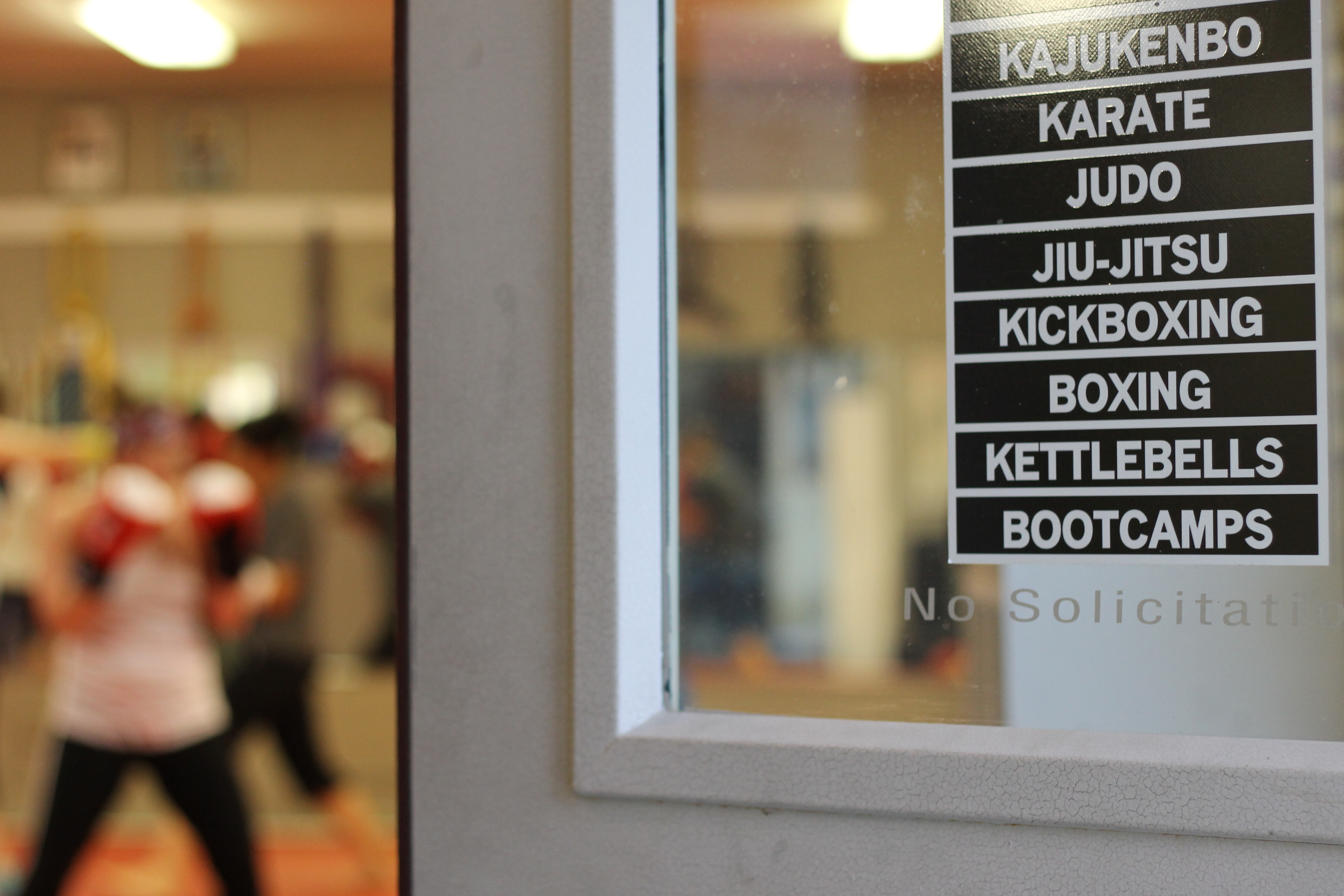 Julia Gschwind founded Austin Boxing Babes in 2007, with the hope of giving women a chance to train in an all-women environment. Now armed with eight years of teaching experience and a black belt, Gschwind is punching faster and training more than ever before.

“Most Boxing gyms just teach boxing — but they really don’t teach fitness,” Gschwind said. “You need to work on other things as well to get your body strong enough to withstand the boxing training.”

Located down South Congress and tucked between a mechanic shop and apartments, members of the Austin Boxing Babes practice multiple times a week. Here, visitors spend at least half of their hour-long workout training various fitness exercises, during which they work on cardio, abs and endurance. While working on boxing, Gschwind stresses technique before speed and power. She

On its website, Austin Boxing Babes warn visitors this is not the “traditional gym.” If that’s what viewers are looking for, the site says they “just might have what it takes to be an Austin Boxing Babe.” Whether or not the trainees are looking to become boxers, the gym promises to make everyone “a fighter.”

Before teaching boxing, Gschwind was a boxer herself. Since 1996, she has trained in Germany and the United States. She earned her black belt — the highest achievement a boxer can receive — in 2011.

“It was always for me the one place where you get to forget about everything else in your life,” Gschwind said. “It just kind of gives you such a high and you can be so in the moment where the rest doesn’t really matter as much…It makes you feel empowered, it makes you feel good.”

Gschwind said boxing is a “completely different skill.” She said she fell in love with the sport a long time ago, and hasn’t been able to stop.

In the eight years that she has run Austin Boxing Babes, Gschwind said she cannot pin down one favorite moment,

I have many favorite moments throughout the weeks and months —it usually happens when you see a client get it,” Gschwind said.

Bobby Blanchard tried a boxing class himself, and his heart beat above shows how he struggled and strained himself.

Most recently, Gschwind said her heart was warmed when she was working with a young girl with cerebral palsy — a movement disorder that often appears during childhood. The girl was jumping rope, but had struggled to master the technique of crossing arms in between jumps.

“She’s been here for three years and she didn’t even want to attempt that movement. But today we just kept working on it and working on it and all of a sudden she’s there — jumping jumping, crossing her hands, jumping, jumping, and doing it again,” Gschwind said. “And she’s like floating, like ten feet above the ground…It’s a little thing, but it’s just so awesome.”

She said people are sometimes scared of trying boxing — but she encourages everyone to give it a chance.

“Just jump in,” Gschwind said. “I lot of people think they have to get in shape first before they start boxing — I get that a lot. That’s why you should come, we can train you…People get hooked, they just gotta show up. It takes courage, but just show up.”

← Beer Culture A-Brewin’ on Campus
Before & After You Graduate →