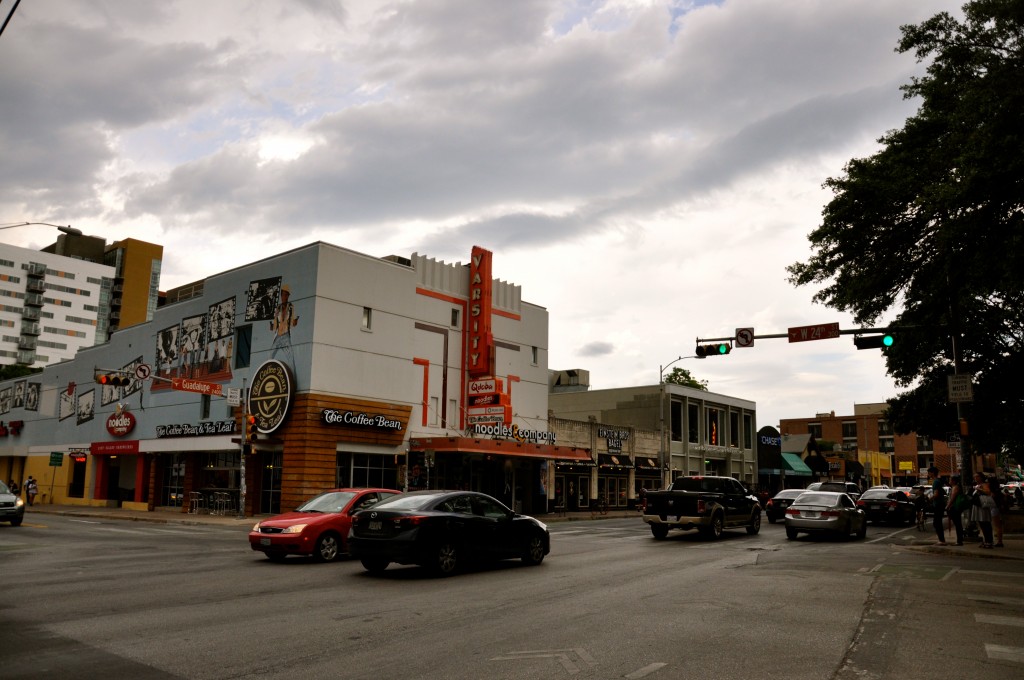 In an effort to make changes to Austin’s Guadalupe Street, popularly known as The Drag, the city’s transportation department is seeking feedback from students and the community.

The official plans for changes, formally known as the Guadalupe Corridor Improvement Program, were initiated in 2014 by the transportation department.

Possible changes include the upgrading of sidewalks and an overall improvement in mobility and safety.

My Guadalupe, an organization at the University of Texas at Austin, was created in an effort to ensure that students’ opinions would be considered in the overall planning of the project.

“This organization began early in the semester in response to the low student turnout at a public meeting that the city hosted regarding the Guadalupe Corridor Improvement Program,” Jacob Brackmann said, a member of the organization. “Myself, along with a few other students and local stakeholders held a few preliminary meetings to decide what kind of organization we wanted to become and what our approach to the issue would be.”

Overall, the organization hopes that the city’s plan for improving the street will place an emphasis on pedestrians.

“Most Austin transportation engineers might be able to give a traffic count for the number of people in cars that utilize the street on a daily basis, but those same engineers arguably might not be able to give a count for the number of people that utilize the street by walking,” Brackmann said. “In our thinking, we argue that an individual that walks deserves just as much attention in a planning or design process as individuals that drive.”

Several changes that the organization would like to see include the expansion of sidewalks, the planting of trees to provide shade and the improvement of safety regarding the interaction between pedestrians and individuals in cars.

“Simply put, we would like for Guadalupe to become a wonderful urban public space for people to interact with and enjoy,” Brackmann said. “We want to ensure that the improvements focus a lot on pedestrians, as well as other methods of human movement.”

On Thursday, April 30, the city’s transportation department held an open meeting on campus to discuss the current state of the planning process with project manager Alan Hughes. Students and members of the community were encouraged to attend and provide input on changes for Guadalupe Street.

Few of the takeaways from the meeting include an emphasis on pedestrian safety and improving the overall appearance of the entire area. The city also plans to hold another open meeting in the fall after receiving designs from consultants.

“They hope to have project proposals with cost expectations established and ready for potential funding by May of 2016,” Brackmann said. 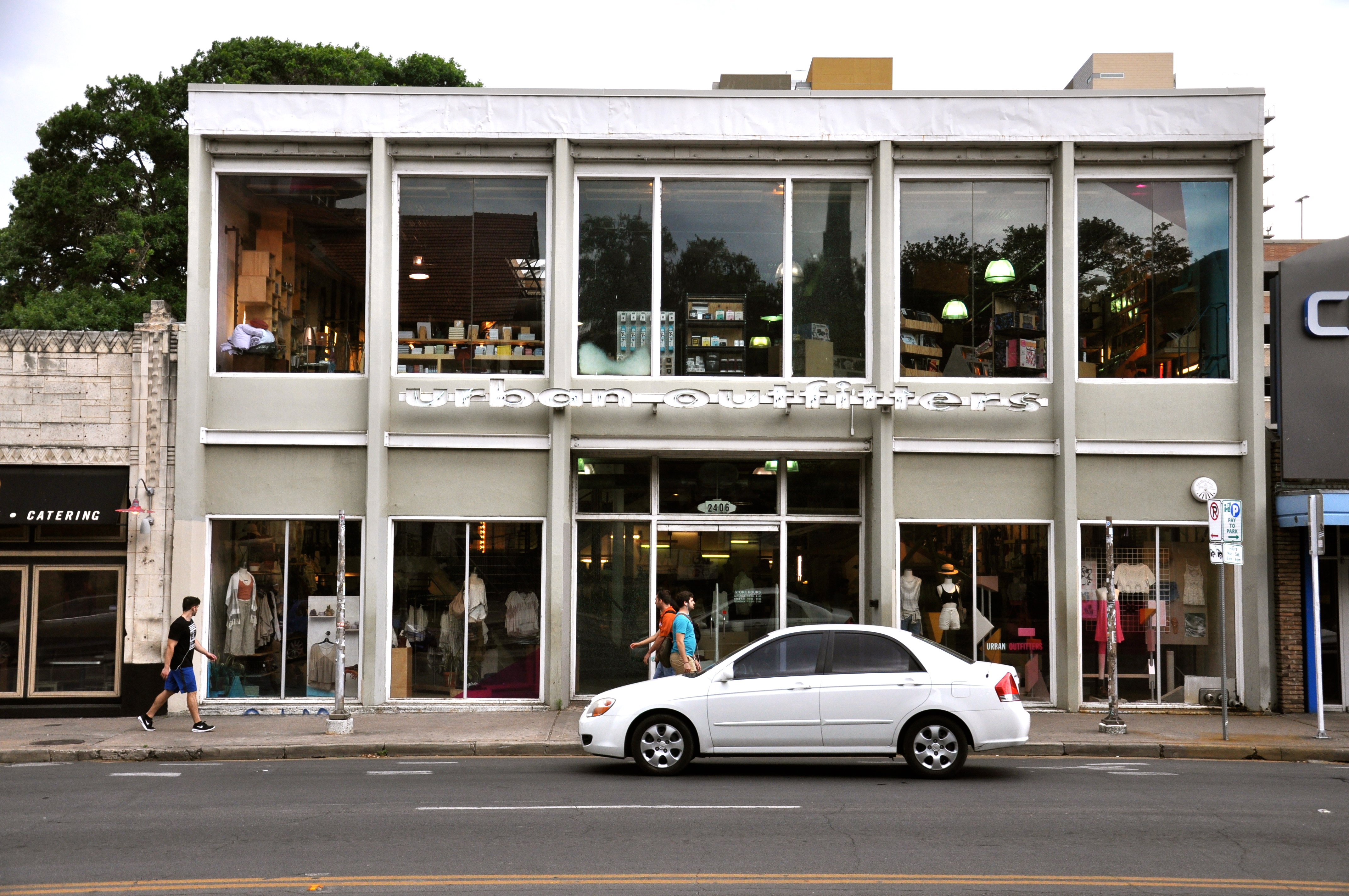 Urban Outfitters will be taking over all the properties to the right of it for corporate offices. 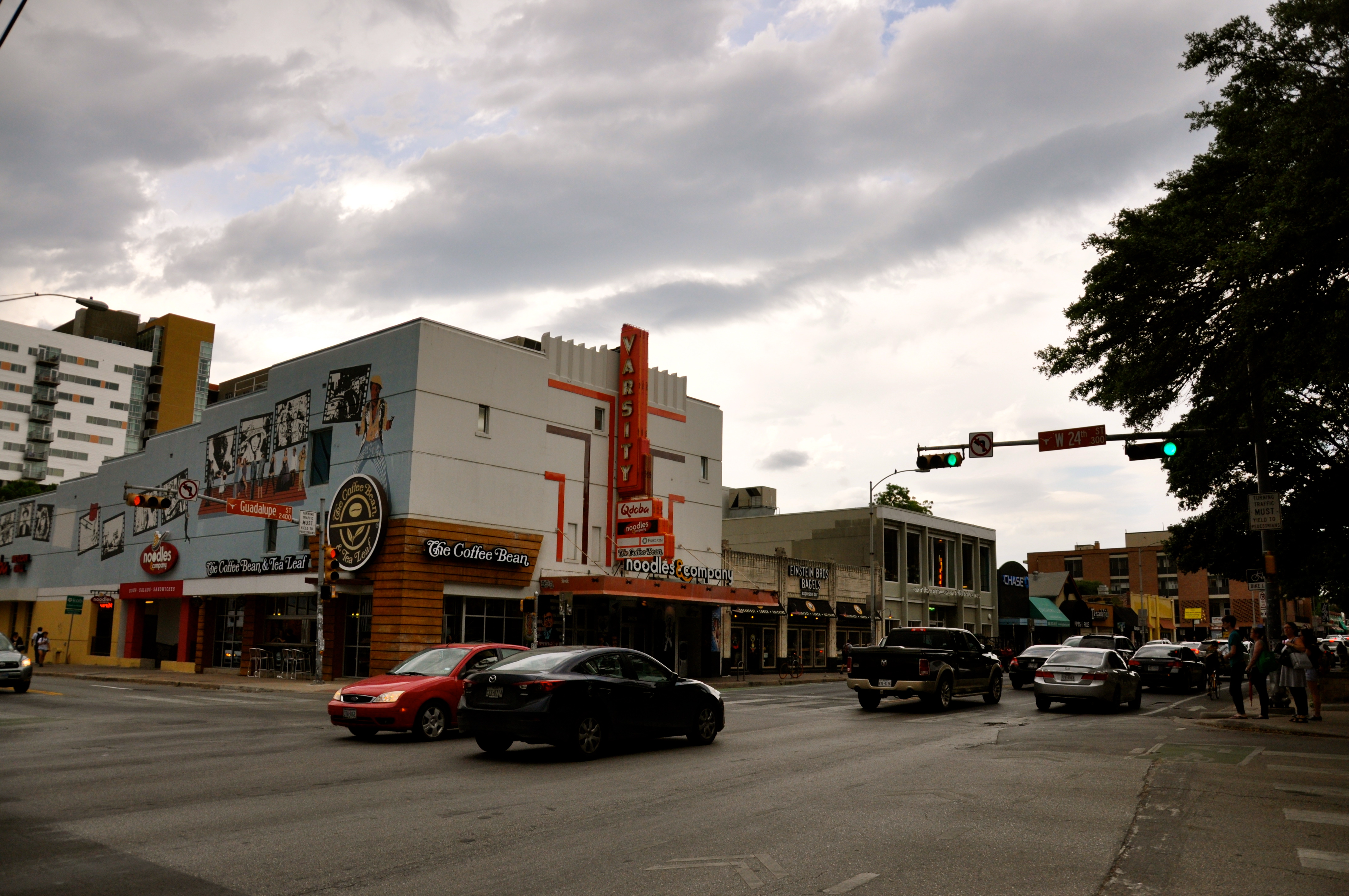 The intersection at 24th Street and Guadalupe has evolved dramatically over the past decades. 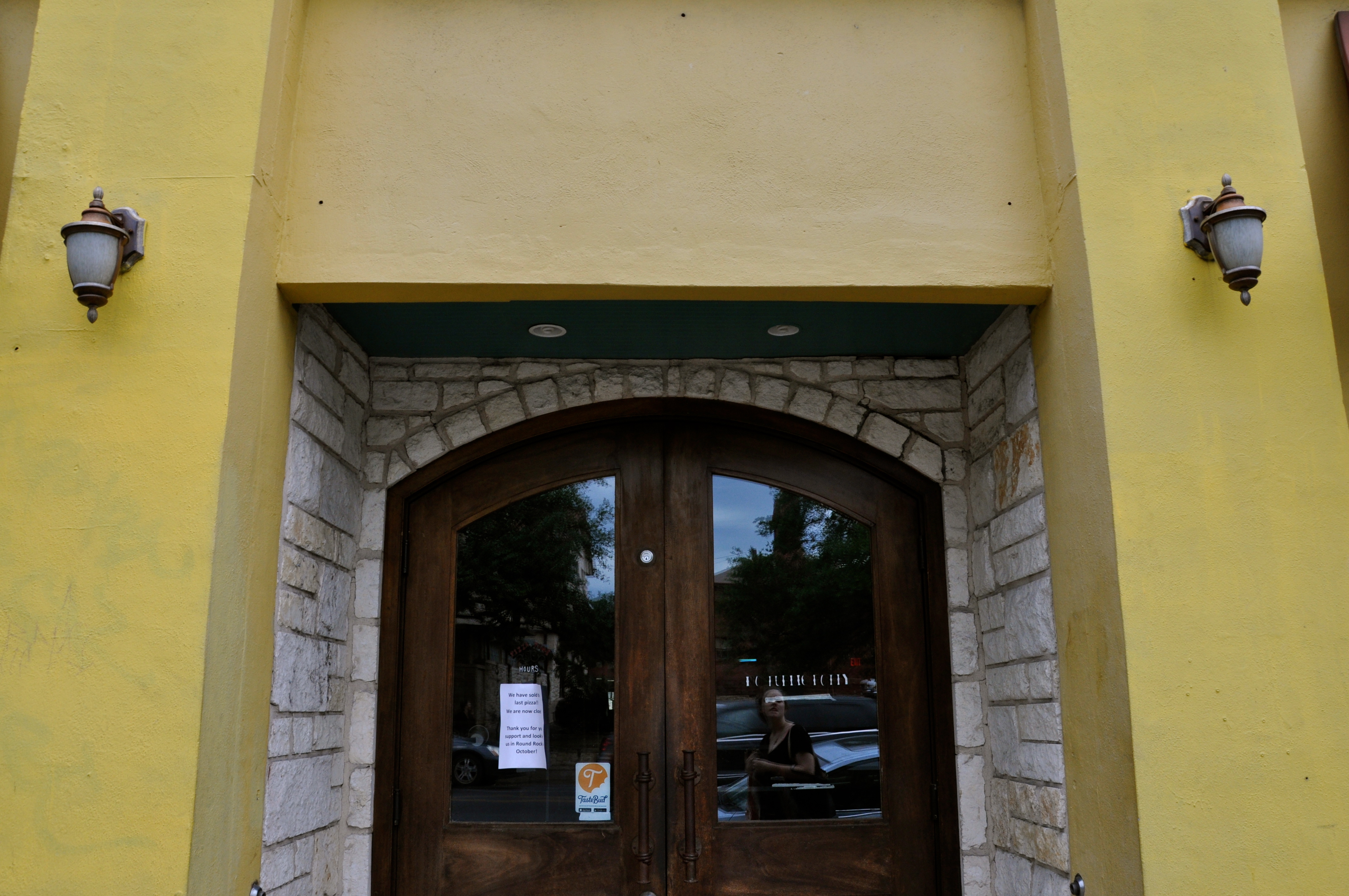 Mellow Mushroom has officially closed down. 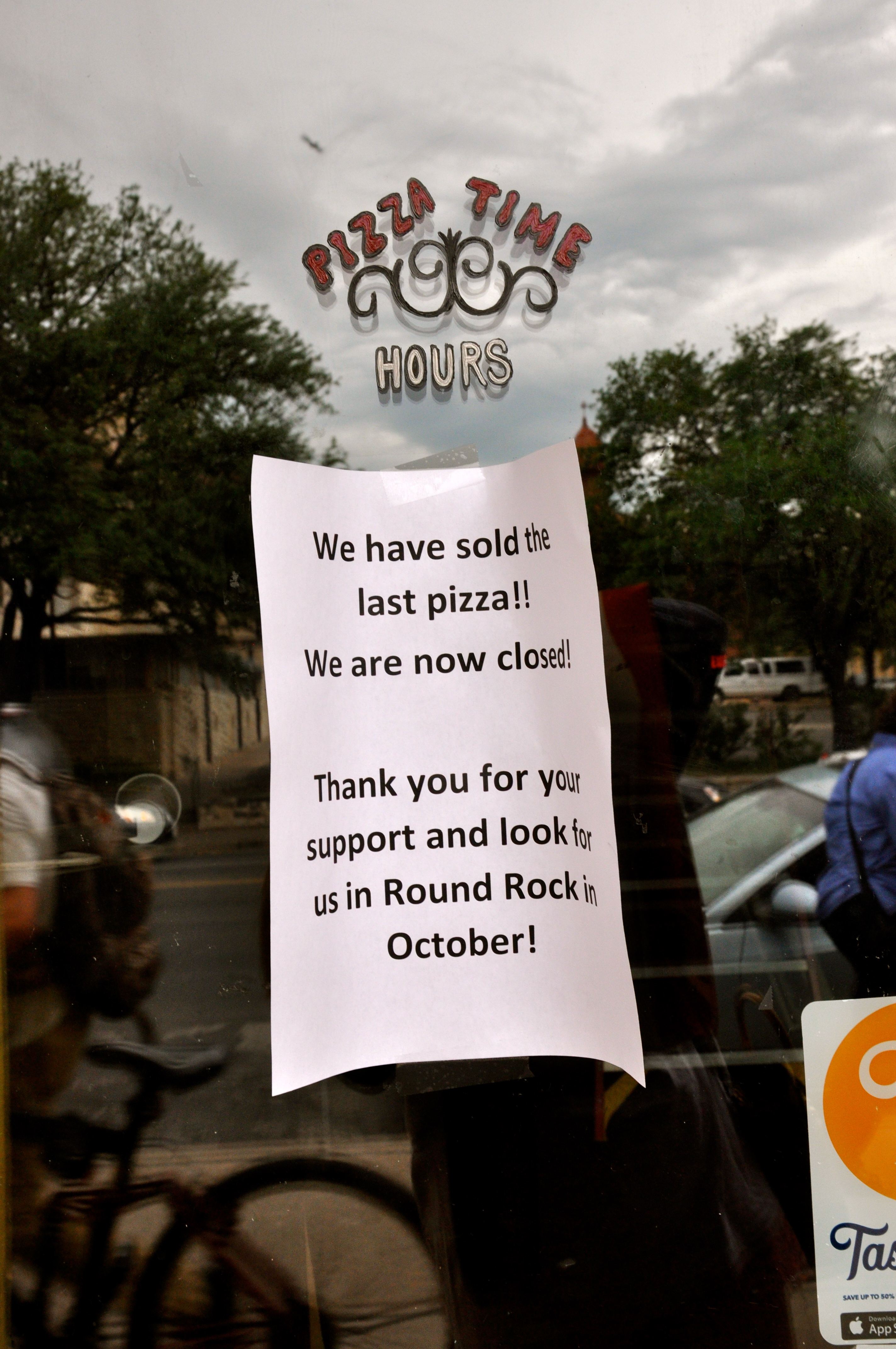 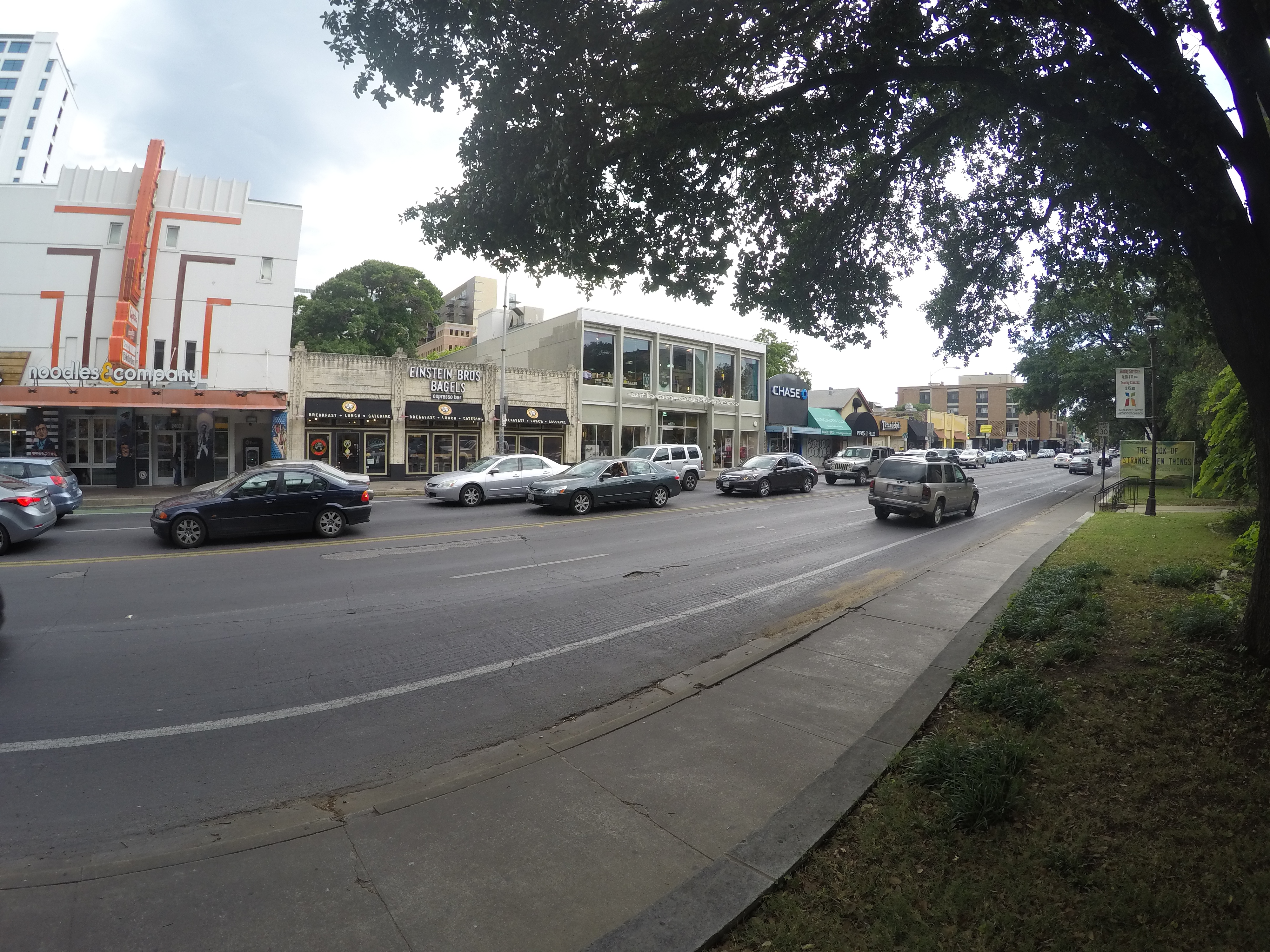 The block between 24th Street and 25th Street is about to undergo a massive transformation. 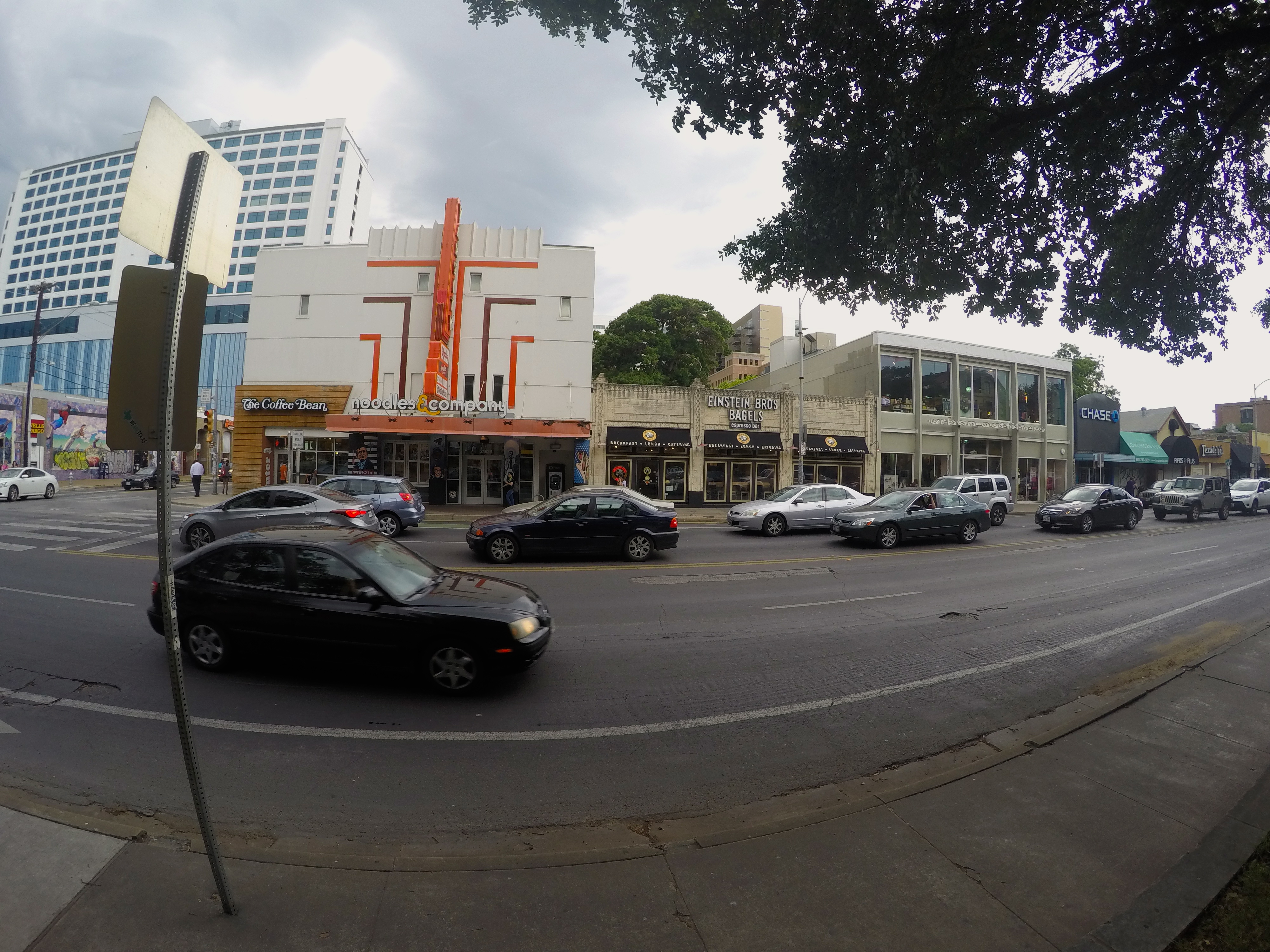 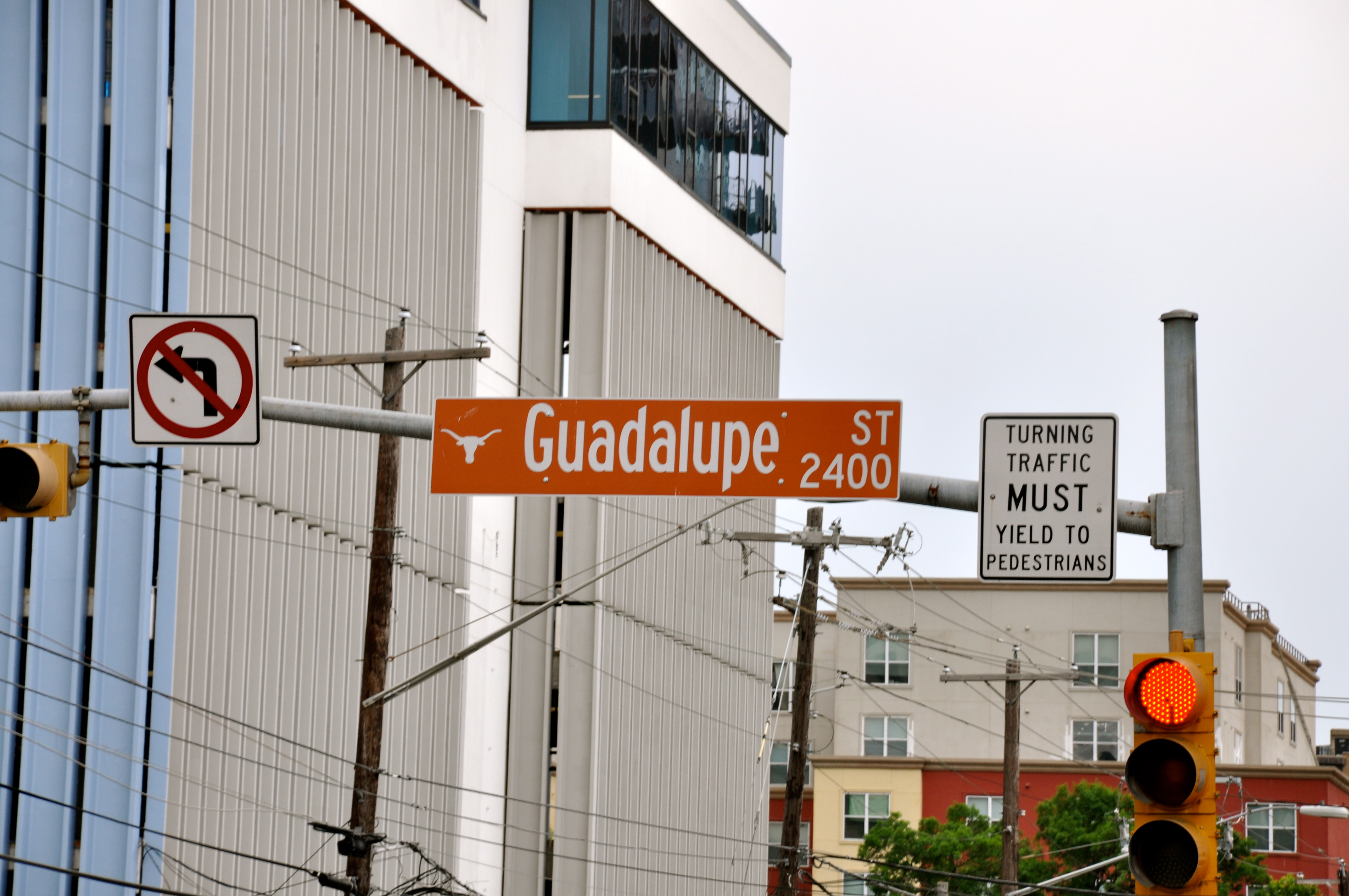 Guadalupe Street, commonly known as the Drag, borders the University of Texas at Austin campus. 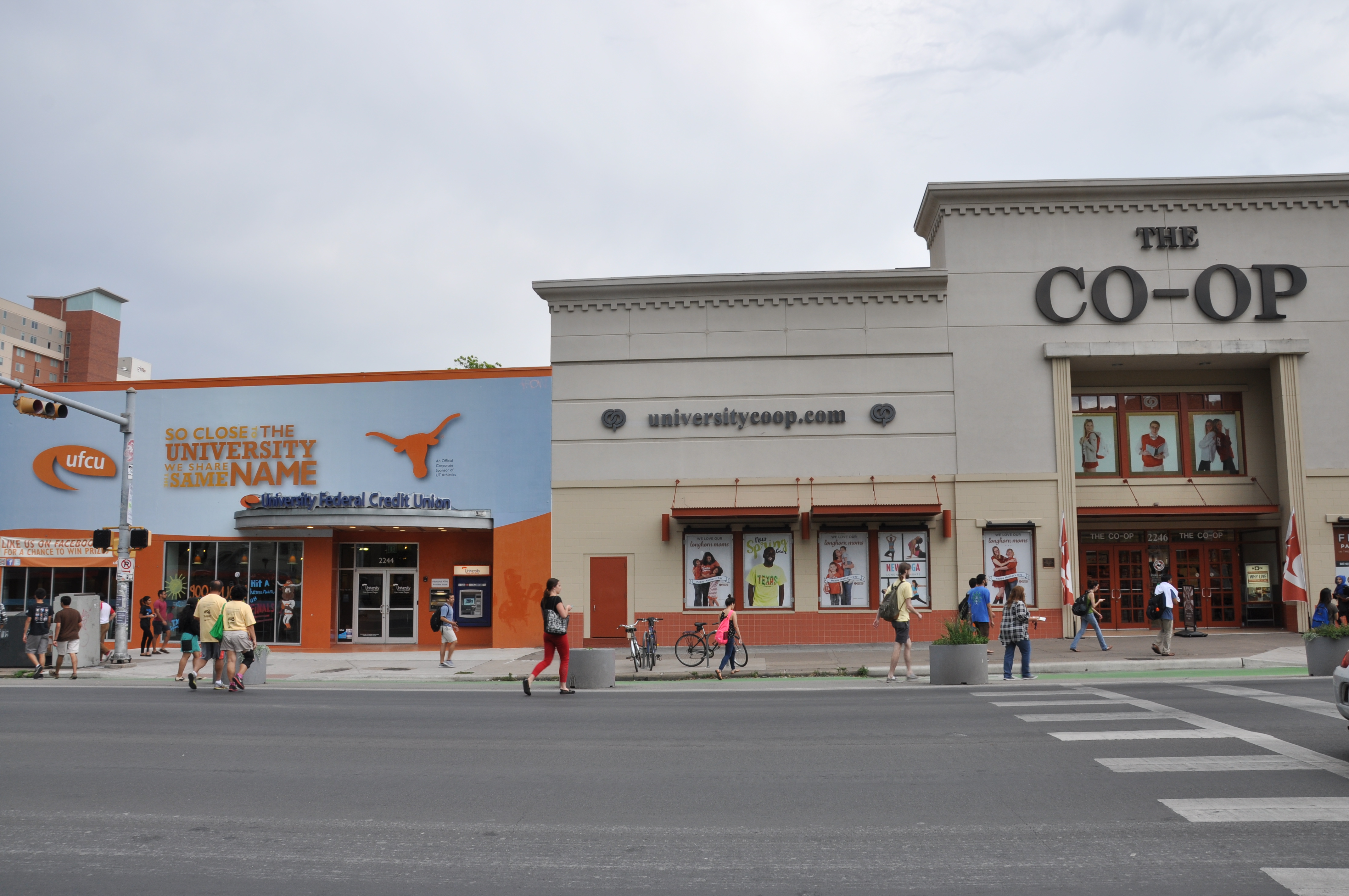 The University of Texas at Austin Co-op owns the space they reside in them making them immune to rising rent on the drag. 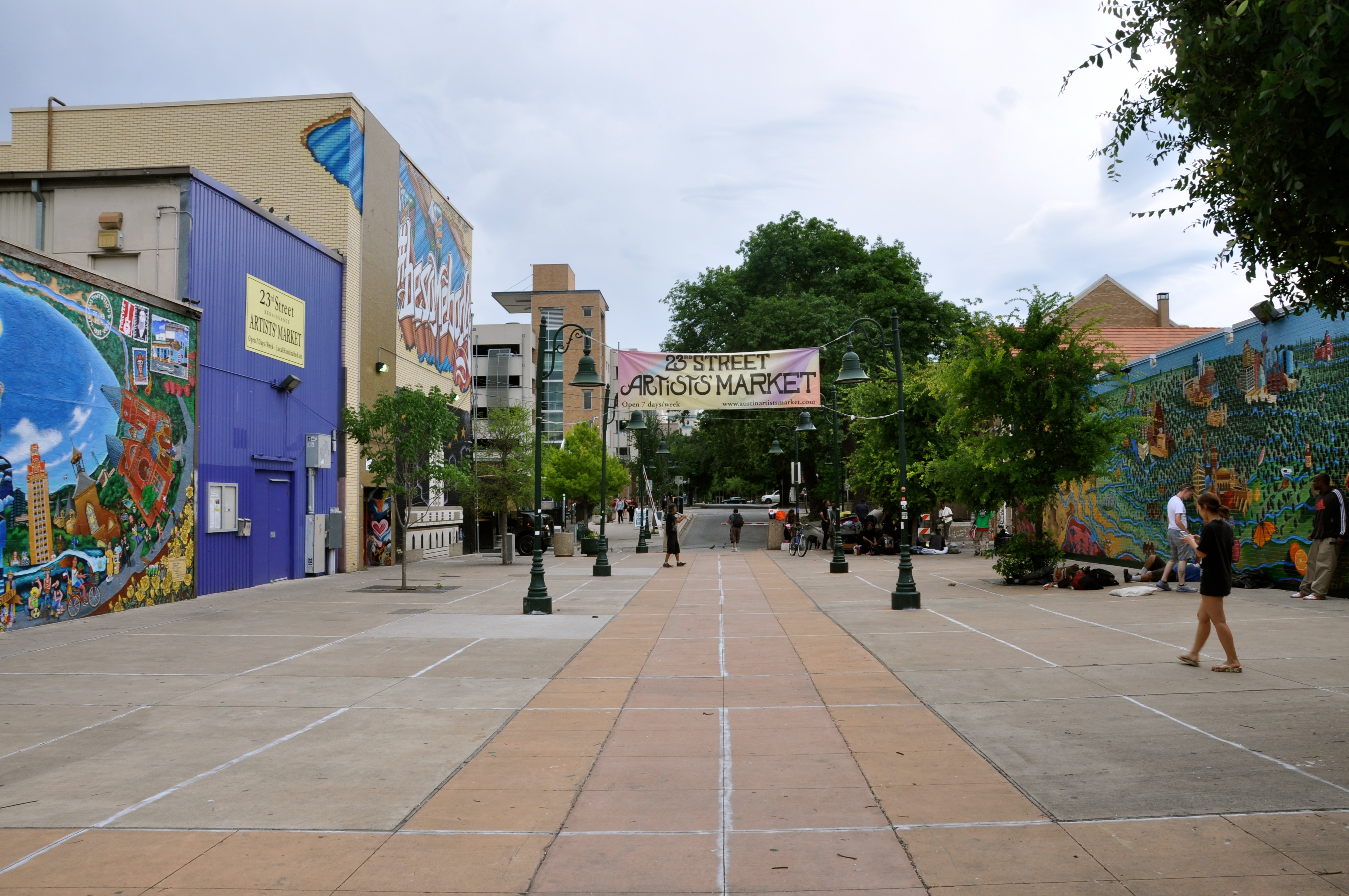 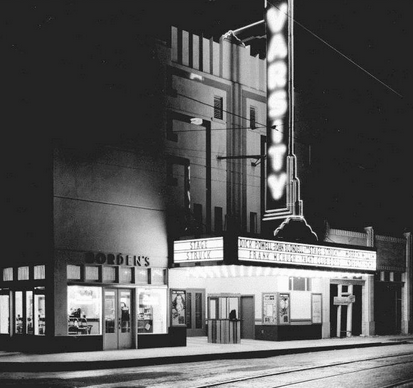 Photo Courtesy of The Austin American Statesman
The Varsity Theater used to reside on the drag and was a local landmark. It was torn down decades ago but the sign still remains. 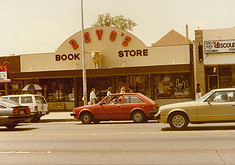 Photo Courtesy of the Austin American Statesman
Bevo Books used to reside on the drag but went out of business due to the increase in rent and rise in chains on Guadalupe Street.

For more information on My Guadalupe, click the following link:
http://prezi.com/jyfktawlpjzp/?utm_campaign=share&utm_medium=copy