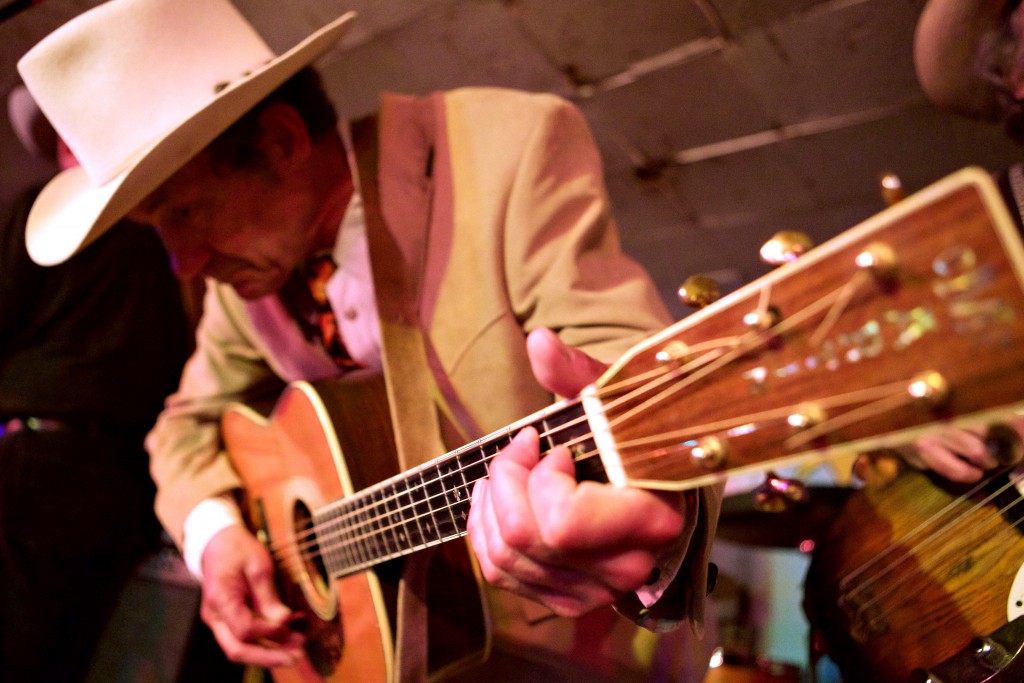 James Hand continues his streak of performing for country dancers at the historic Broken Spoke.

In recent times, Austin, Texas has become known for its pricey music festivals, enormous Whole Foods headquarters and the hype of the weak mixed drinks on Sixth Street, but we must not forget the cowboys and hippie musicians that created this funky place back in the day.

The City of Austin has long recognized that music is a defining element of Austin’s culture, however as the city is in a rapid growth phase and the cost of living skyrockets, many worry the Texas Capitol will lose its charming historical music touch.

As music is an integral part of what many around the world consider Austin to be, several music venues specific to Austin have remained dedicated to maintaining the southern music charm.

“There has been a trend of out-pricing the housing market, to the point that musicians that could struggle to survive here now just struggle and they don’t survive,” said Diane Scott, an Austinite who has worked at the famous Continental Club for decades.

Austin is even home to a Music Commission within City Hall, which works to develop and preserve the local music industry. 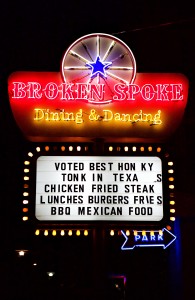 A Broken Spoke sign displays the honky tonk’s pride of its historic success as both a dance hall and restaurant.

In 1964 upon returning from the service, James White came back to Austin. At 25-years-old, after some soul searching, and reminiscing on his country childhood days, he found himself on South Lamar Blvd. staring into rolling green hills, imagining what would be the start of 50 years of the best Honky-Tonk in Texas. Today, Broken Spoke sits at that very spot and is flanked by condo complexes on one of the busiest streets in the Capitol city.

The City of Austin was home to 208,475 people when James first began laying the foundation of the historic country dance hall in 1964. Fifty years later, the population has more than quadrupled, amounting to over 865,504 people in 2014, according to the US Census Bureau.

James White has made it his life’s work to create and maintain a true Texas dance hall.

“Over 50 years I’ve been out here, whatever it takes to keep a honky-tonk going,” White said.

While Austin has become known for it’s trendy downtown bar scene, White is determined to keep the country bands playing and the boots on the dance floor for as long as possible.

“I never want to lose the heart and the soul of the Broken Spoke,” White said.

In 1957, The Continental Club was established less than two miles down Congress Ave from the Texas State Capitol. At the time, the upscale private club featured nationally touring bands and was hailed as the first venue in Travis County to sell liquor by the drink, after originally encouraging its visitors to bring their own liquor, according to the Texas State Historical Association.

A true Austinite, Diane Scott has worked backdoor security and band hospitality at The Continental Club for 22 years.

Scott is concerned that the expense that comes along with living in Austin is pushing away musicians that would otherwise love to live and perform here.

“Today it’s really hard to follow a dream that takes you down a non paying road. Most musicians are leaving Austin altogether or moving out to the suburbs,” Scott said. 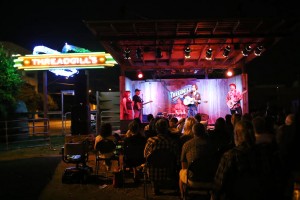 Bands have been playing at Threadgill’s outdoor stage since 1933.

When country music lover Kenneth Threadgill opened a gas station north of the Austin city limits in 1933, he soon applied for a beer license and he began growing a new favorite beer joint for traveling musicians.

“Not to mention it was here [Threadgill’s] where Janis Joplin developed her brassy style that would propel her to become the first female rock and roll superstar,” according to their website.

In 1996, Threadgill’s was opened in South Austin.

Eddie Wilson, who has owned the restaurant since the mid 1970s has made a distinction between the two locations: the original location on North Lamar has the theme of Austin between the 1930’s and the 1960’s. The south location celebrates the history of the Armadillo World Headquarters, opened by Wilson, and the 1970’s.

After taking over the popular eatery and music joint, Eddie Wilson has seen it through the past 40 plus years, witnessing the rapid growth of Austin.

“Now when you go on Mt Bonnel you look out at rolling roof tops instead of rolling hills,” Wilson said.

Culture and creativity are the basis of what Austin stands for, however as these historic venues rapidly lose their chance to survive only time will tell if the quirky Texas Capitol will truly remain the “Live Music Capitol of the world.” 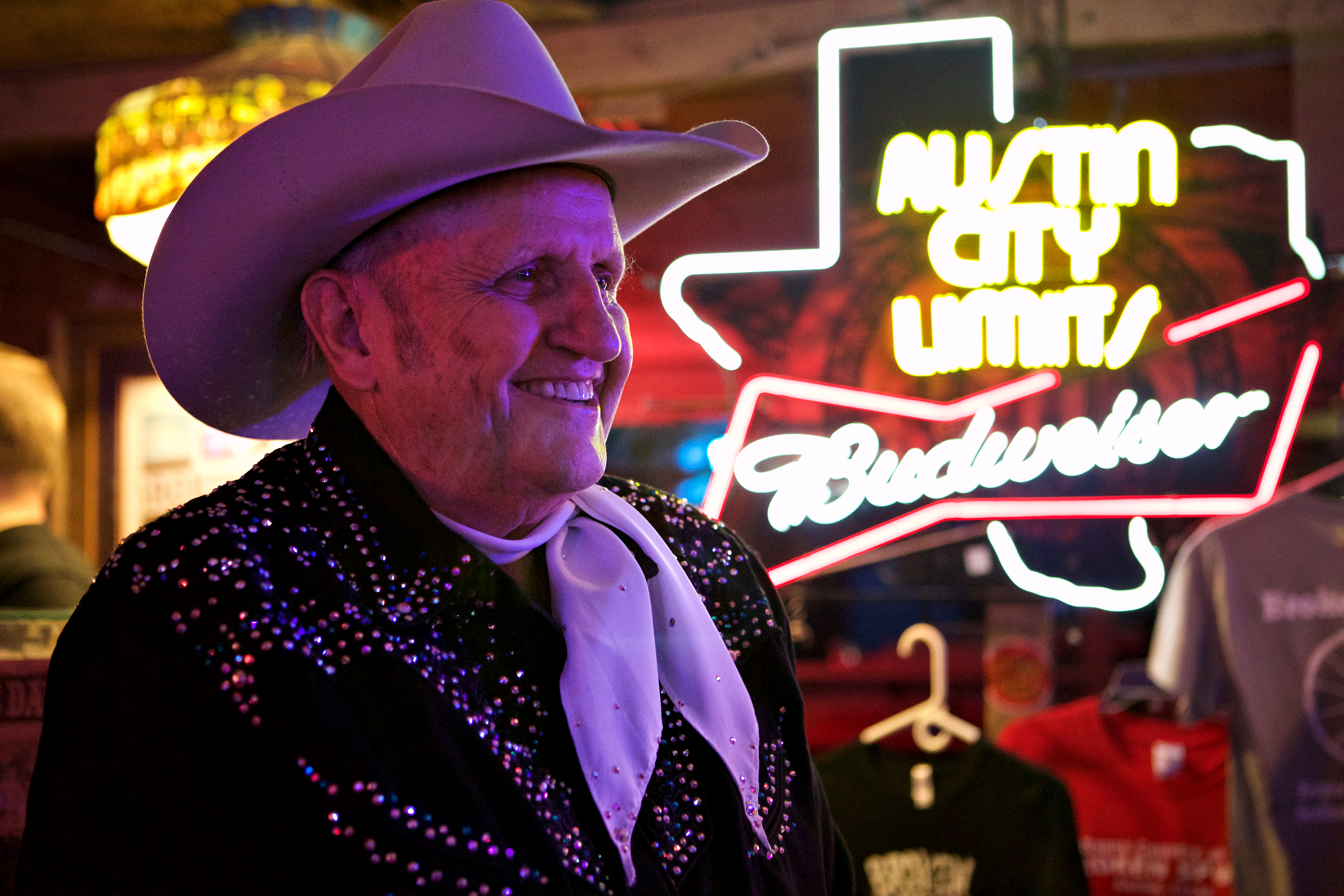 James M. White, 76-years-old, founded the Broken Spoke when he was just 25-years-old. He is still the honkey tonk's owner and operator today. 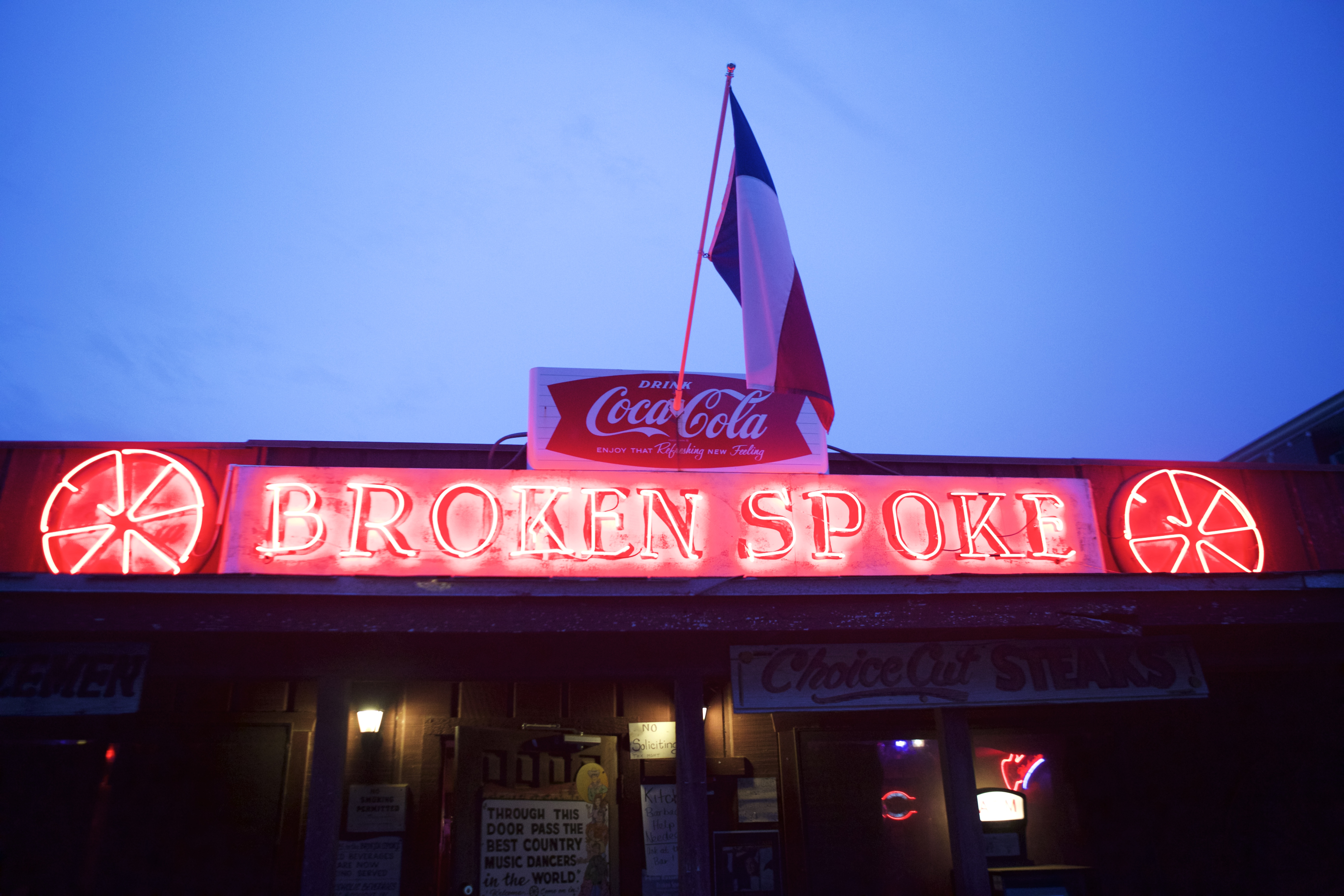 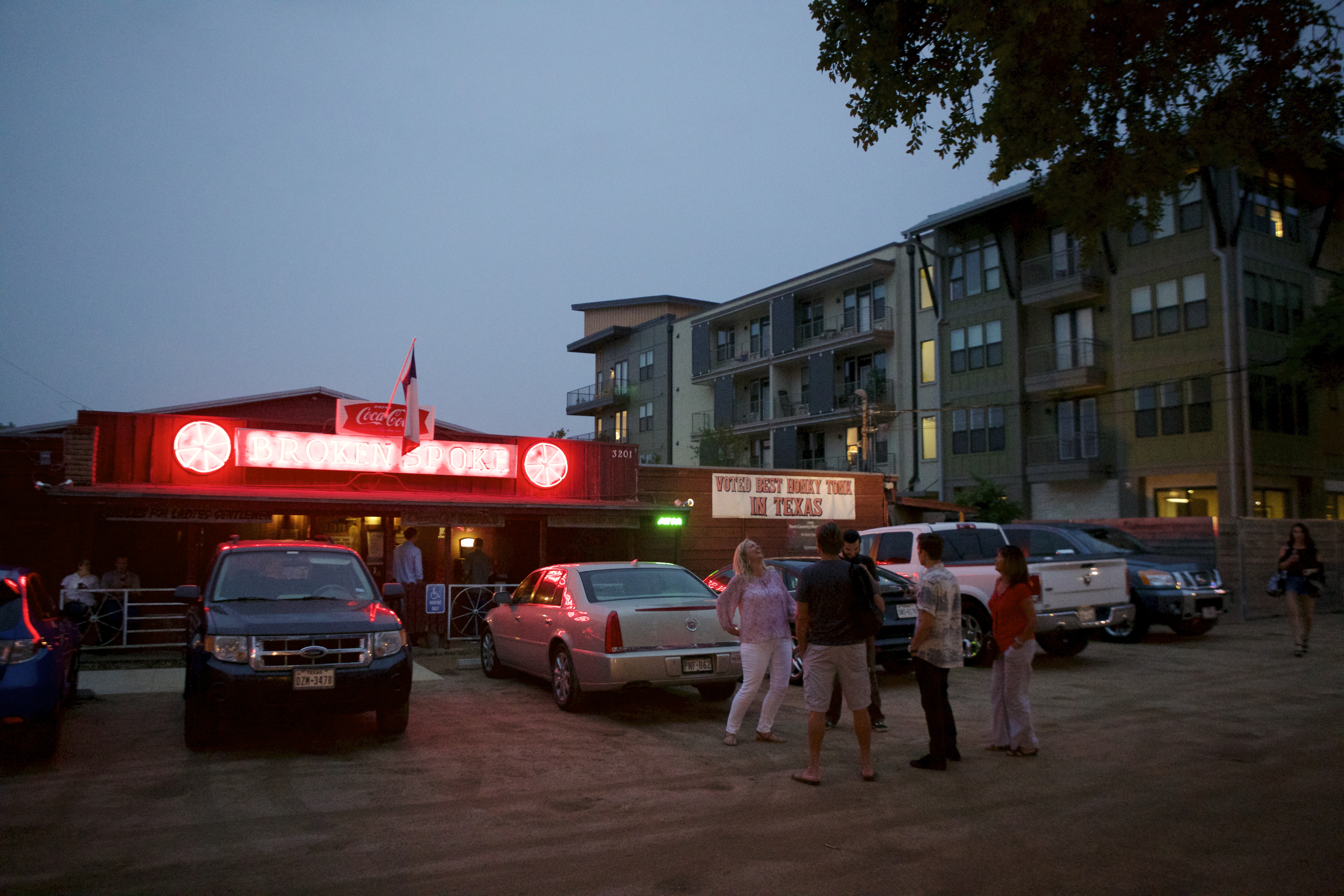 Fifty years ago Broken Spoke sat alone on the South Austin road. Today it is surrounded by apartment complexes, however nothing keeps the line dancers away. 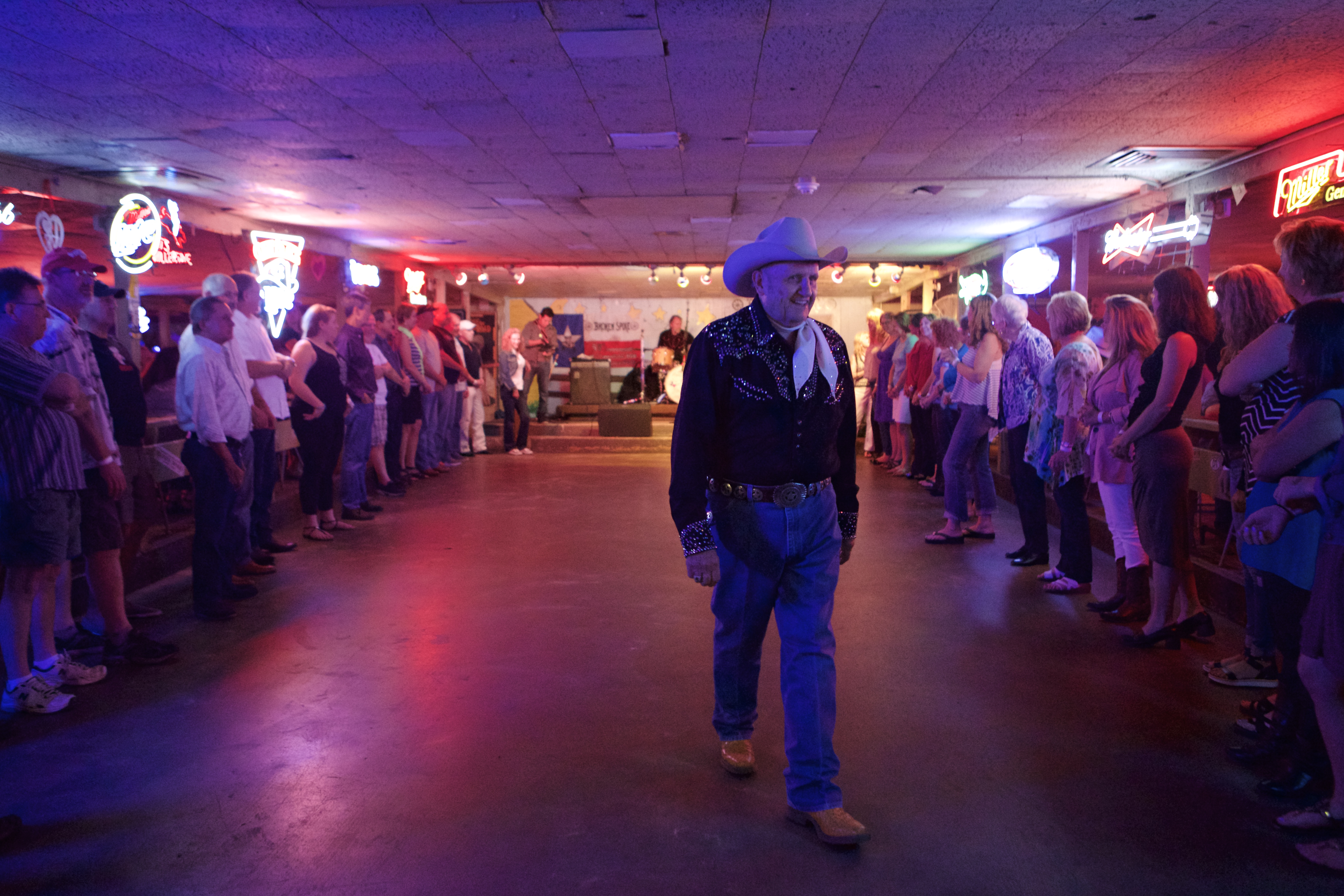 White prides himself on maintaining one of the last true Texas honky tonks. 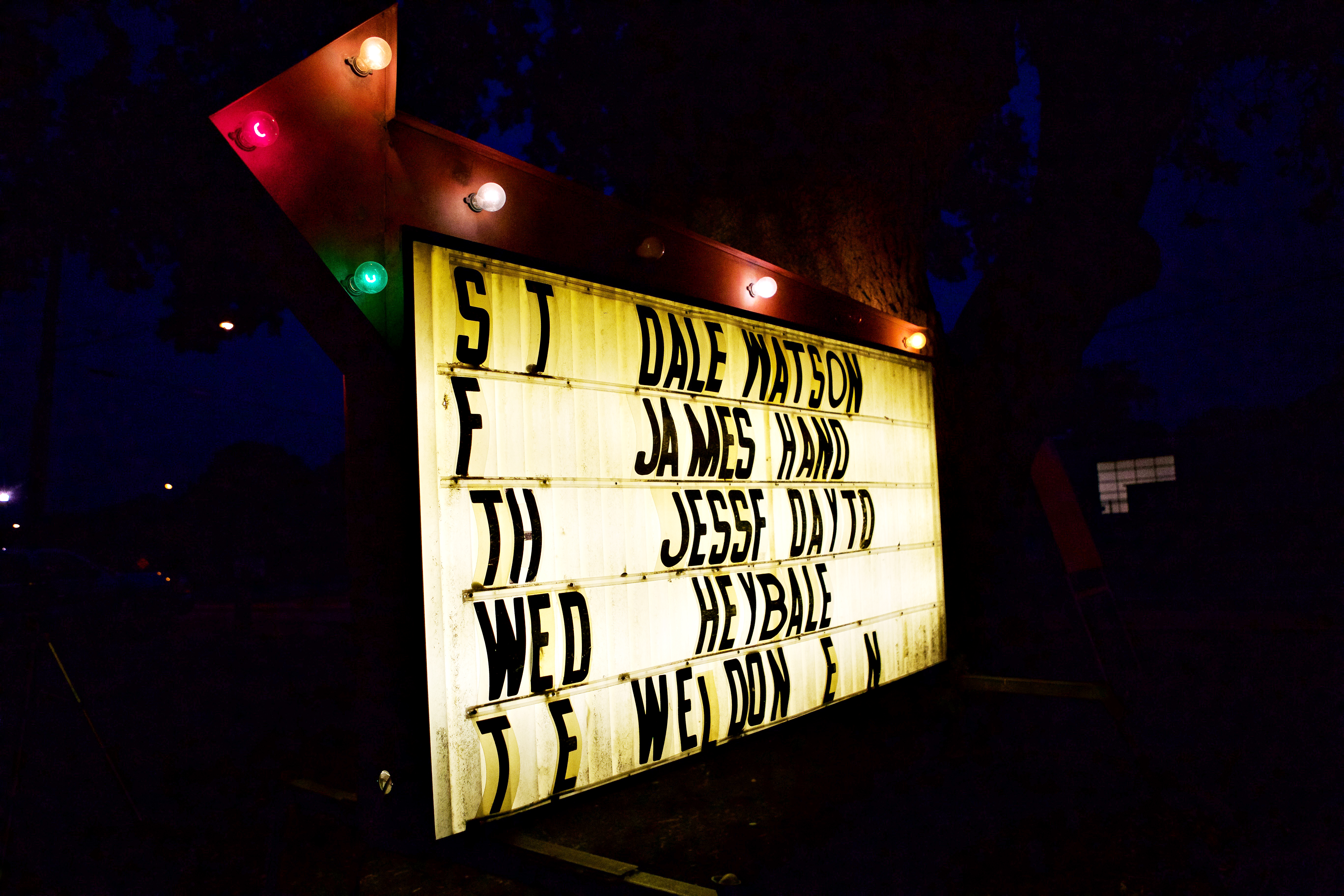 White books the bands to perform at the dance all throughout the week. Several bands and singers have made regular appearances through the years. 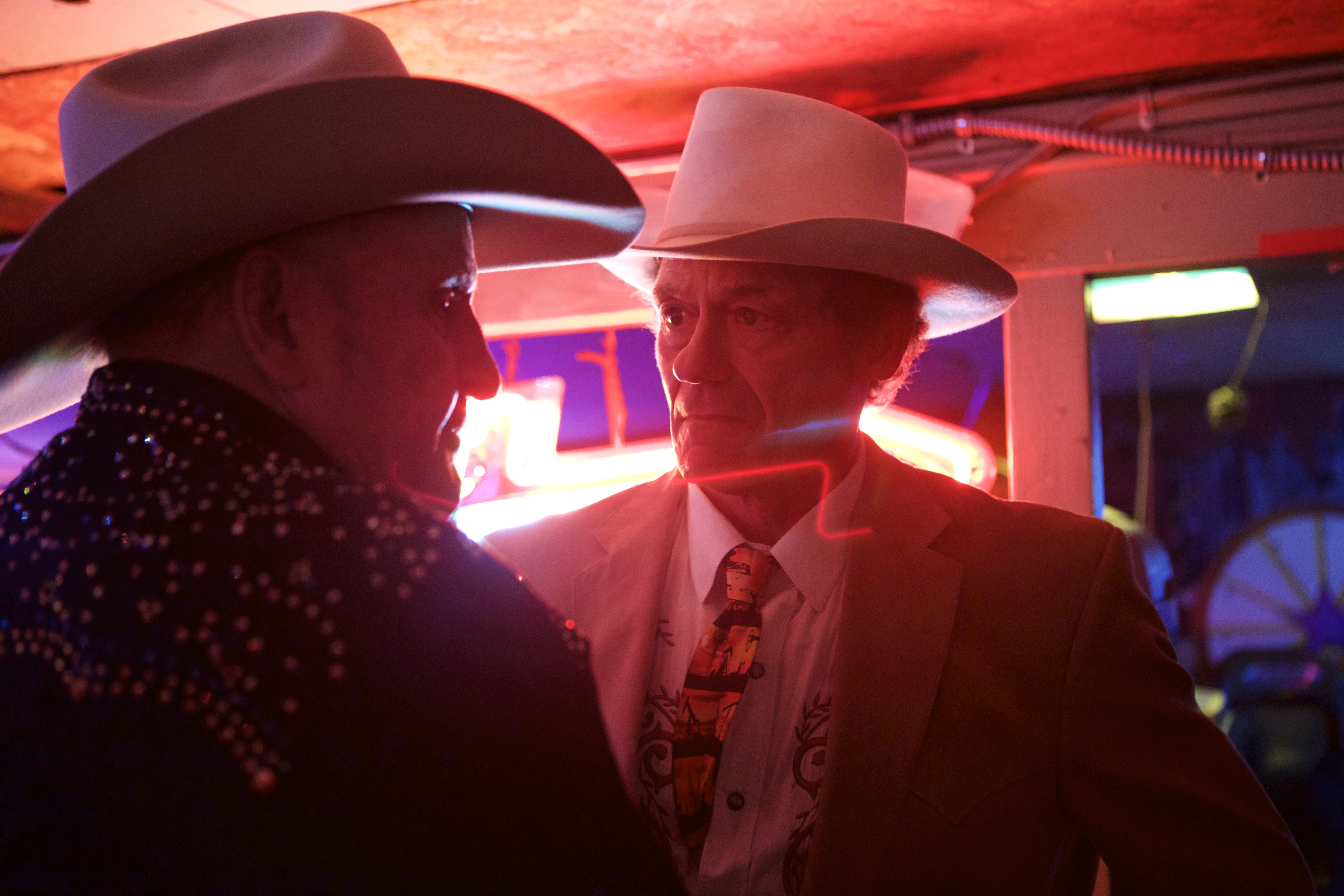 Singer James Hand (right) is greeted by White before performing to a crowd of anxious country dancers. Hand has been a regular performer for decades of 'Spoke' tradition. 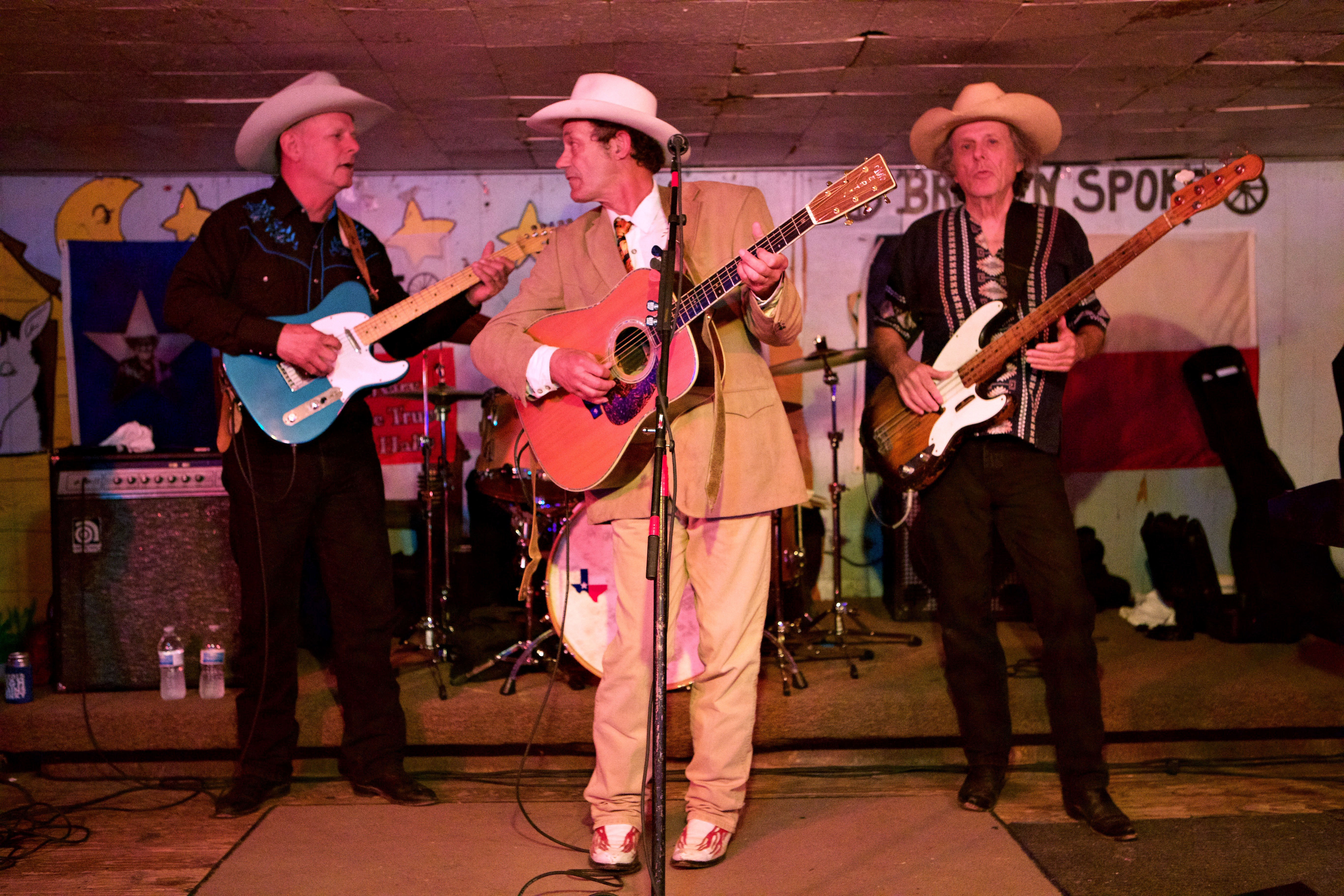 James Hand and his band perform at the Broken Spoke, to a crowd of over 500 dancers and onlookers. 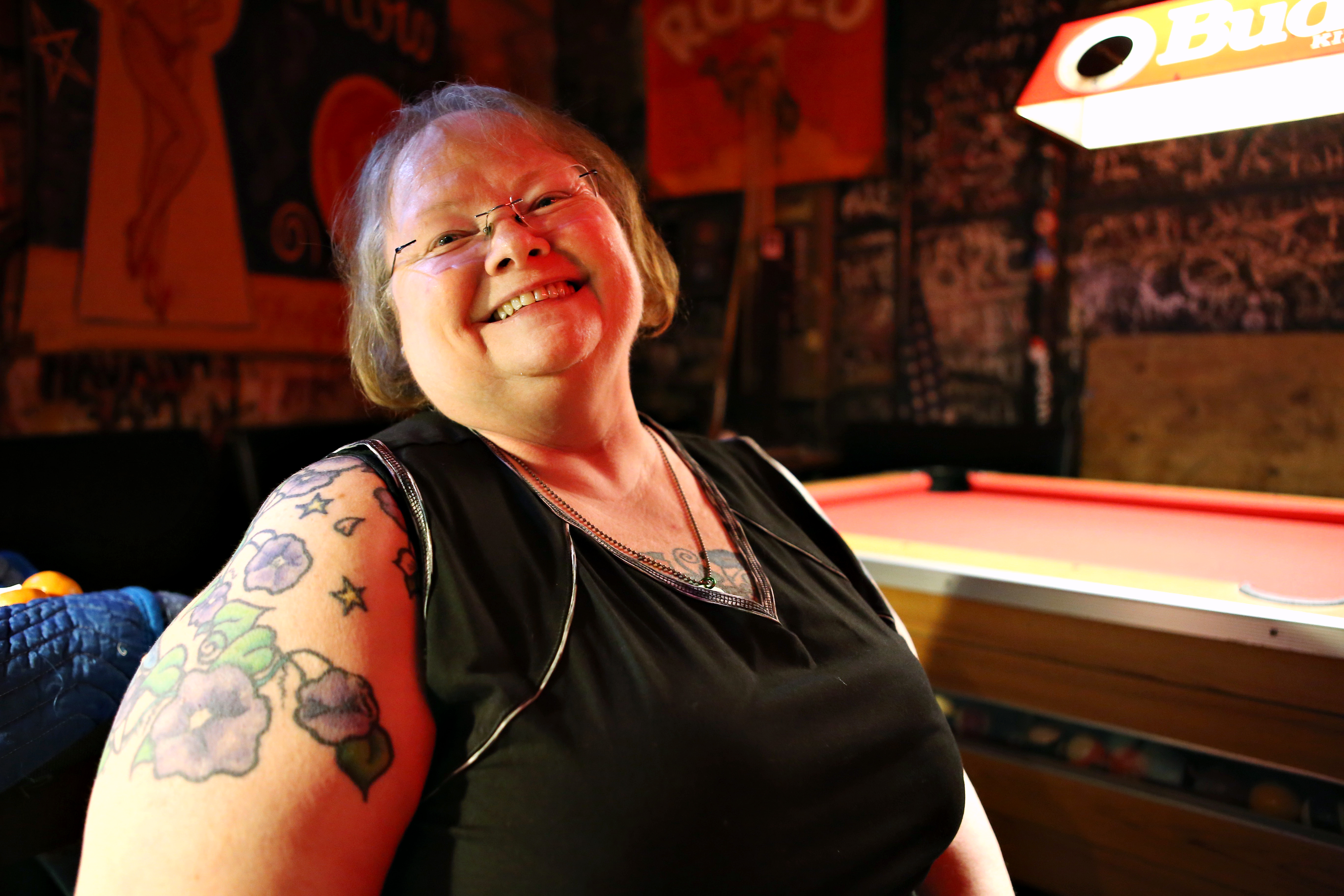 A true Austinite, Dianne Scott has worked backdoor security and band hospitality at The Continental Club for 22 years. 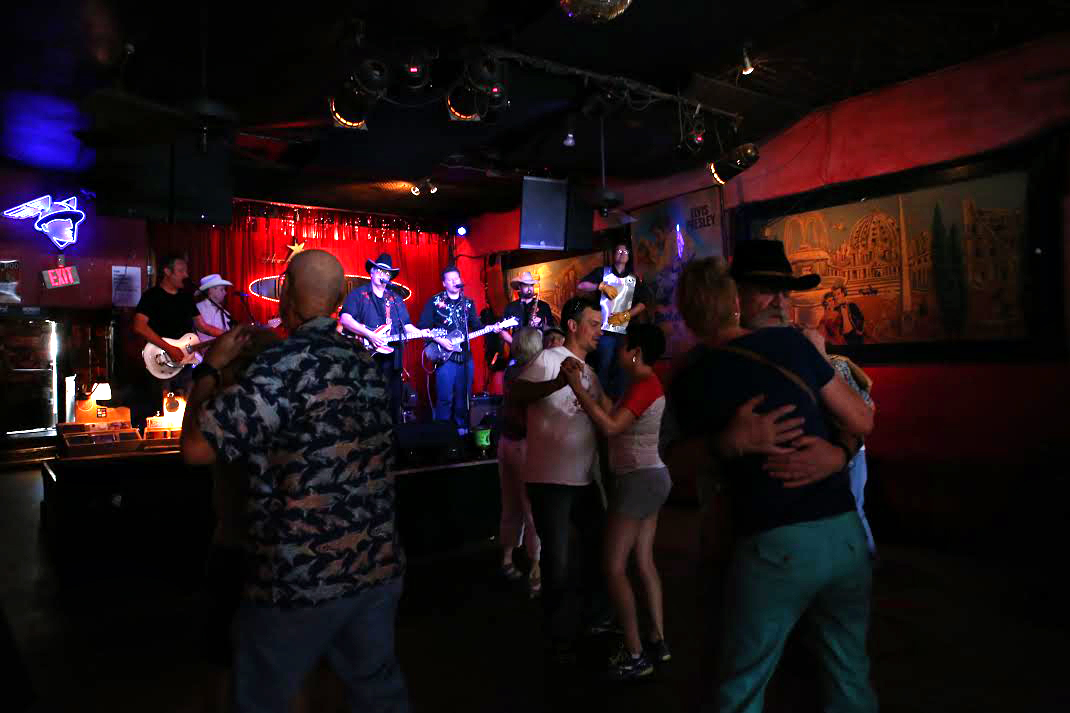 The Continental Club is far more than your average bar. Part of the club space is used for customers to dance as they listen to live music. 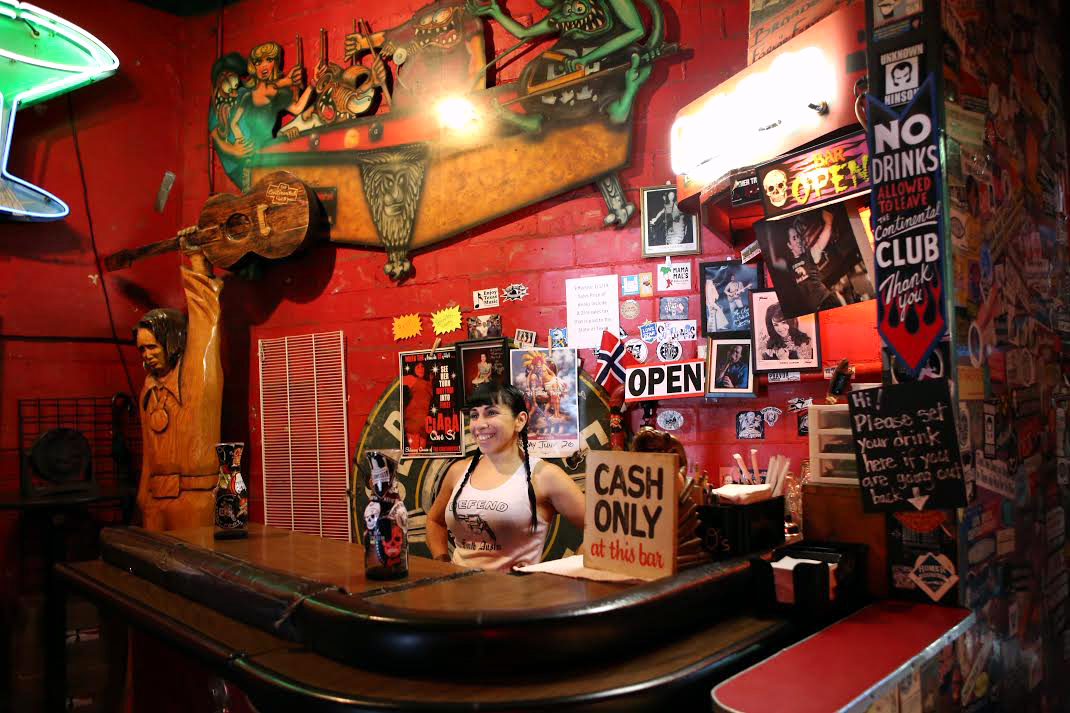 The Continental Club also has a second bar next to the back door behind the stage. Diane said that is where she first met Robert Plant along with many other musicians. 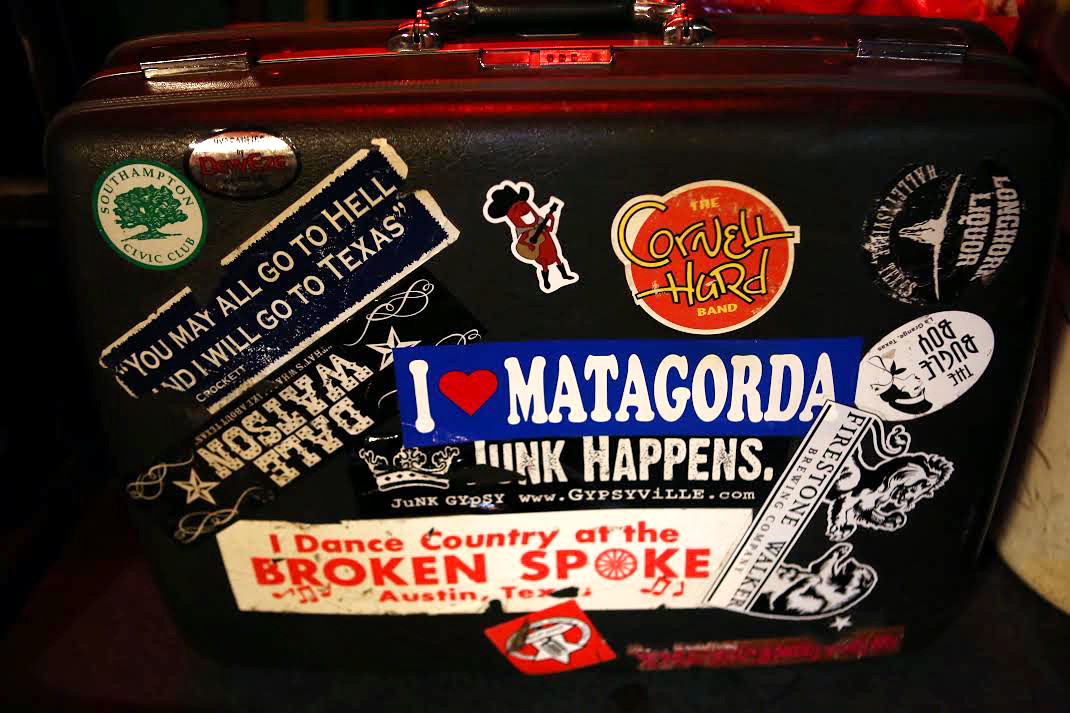 A decorative suitcase at the Continental Club displays a Broken Spoke sticker, showing the connection between the two historic music venues. 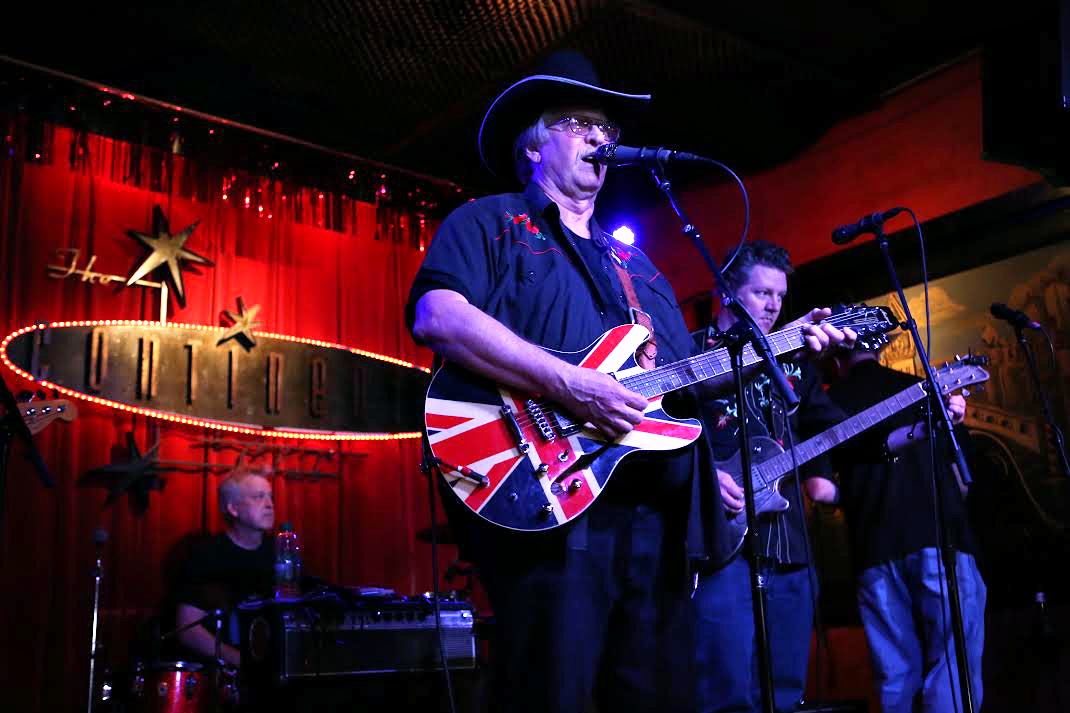 The Cornell Hurd band performs at The Continental Club. 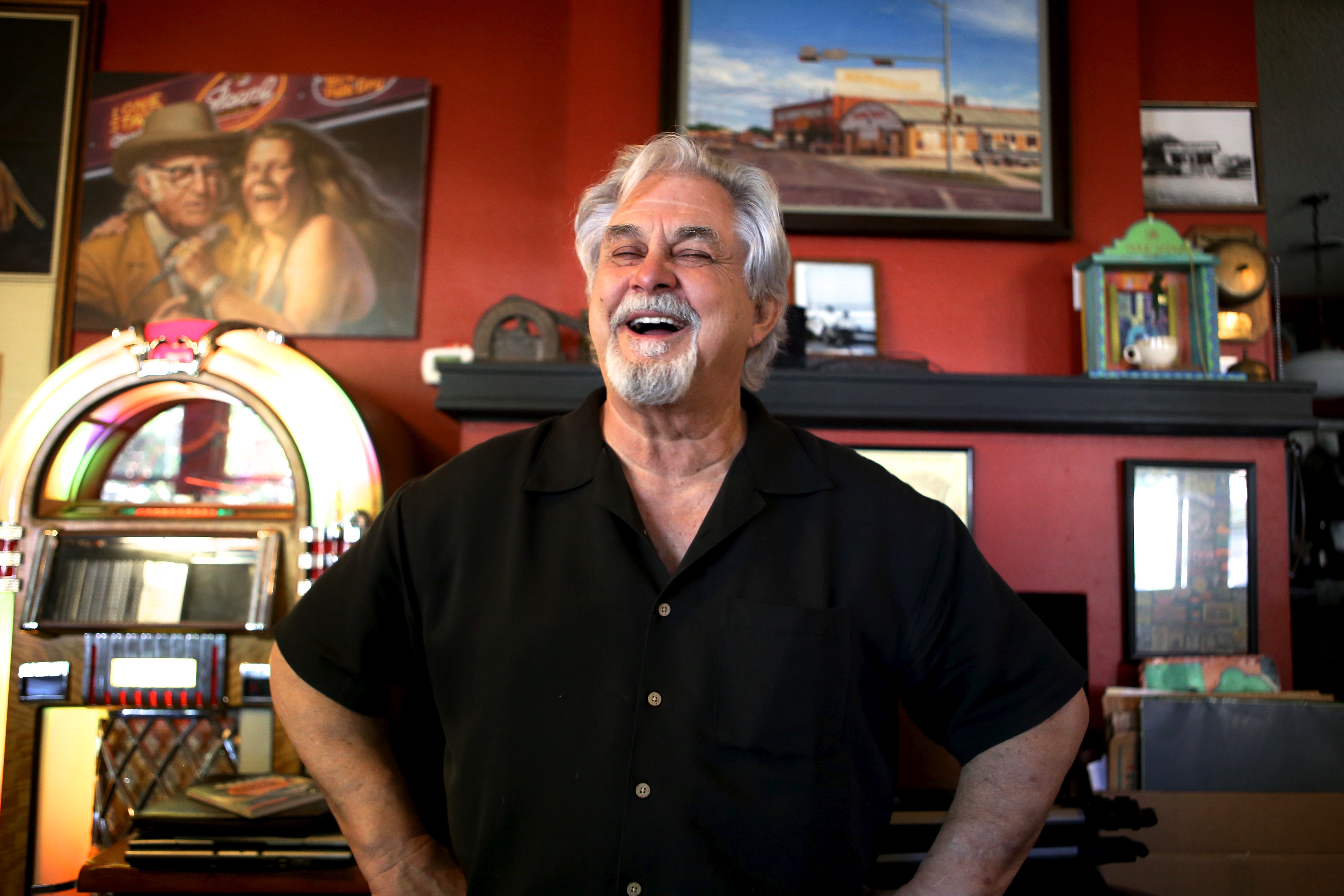 Eddie Wilson was the co-founder and owner of the old Armadillo World Headquarters and is now the current owner of Threadgill's. 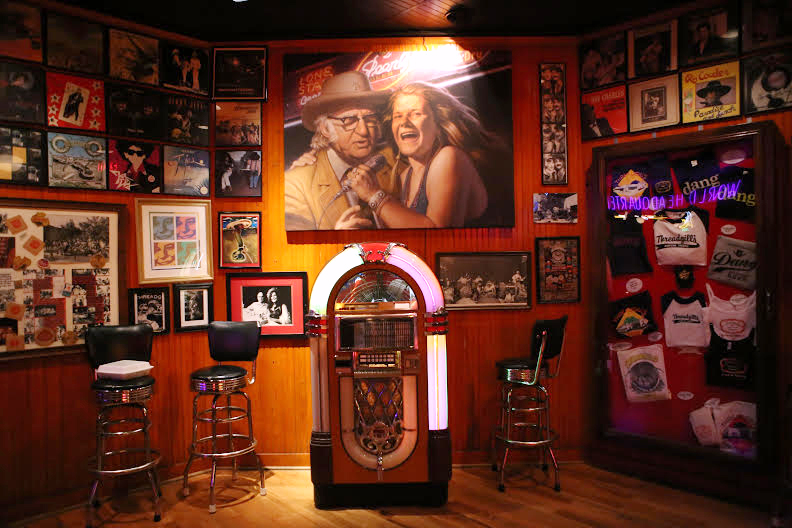 In 1996, Threadgill’s World Headquarters was opened in South Austin. 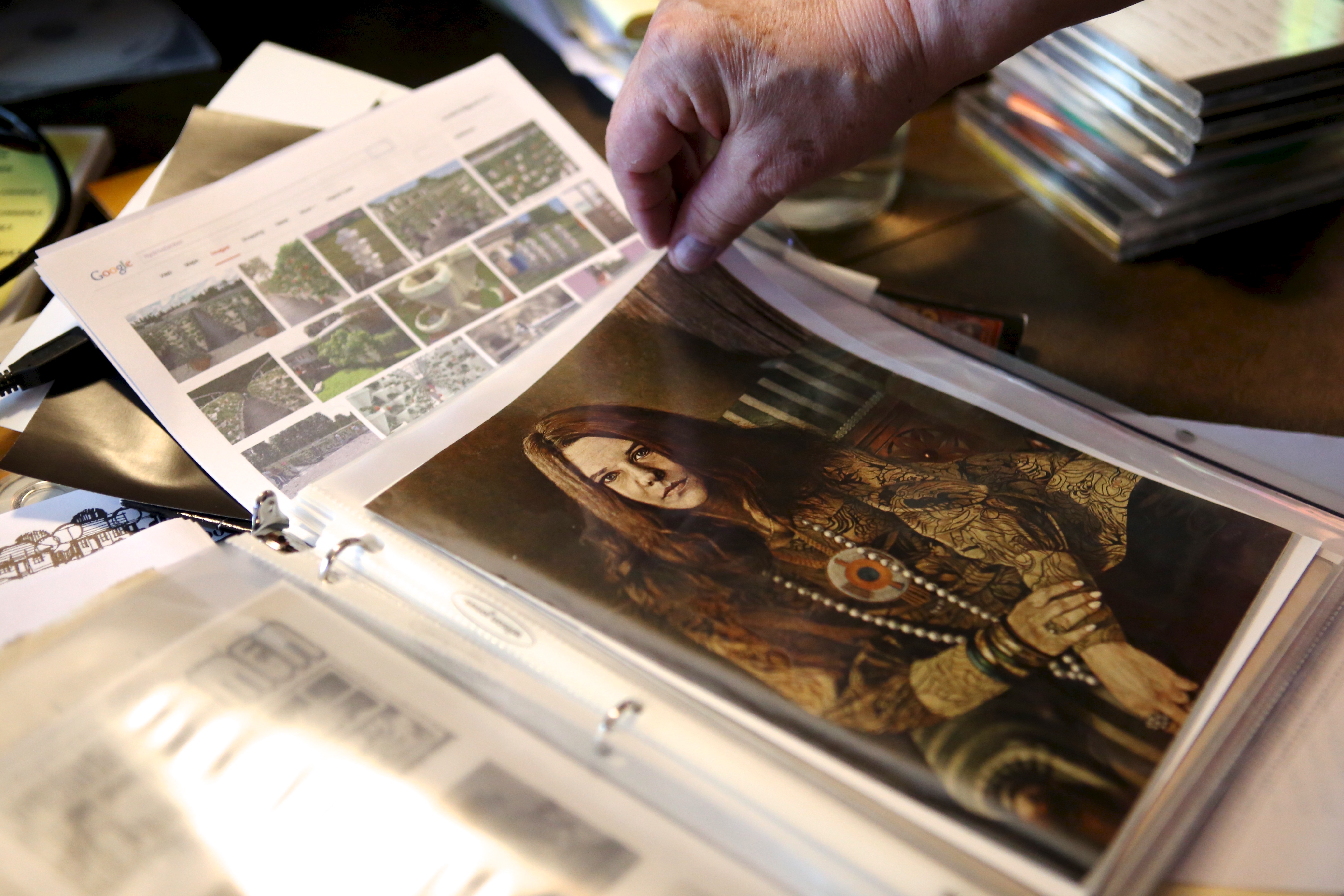 Wilson shows off pictures of Janis Joplin, who developed her brassy style that would propel her to become the first female rock and roll superstar. 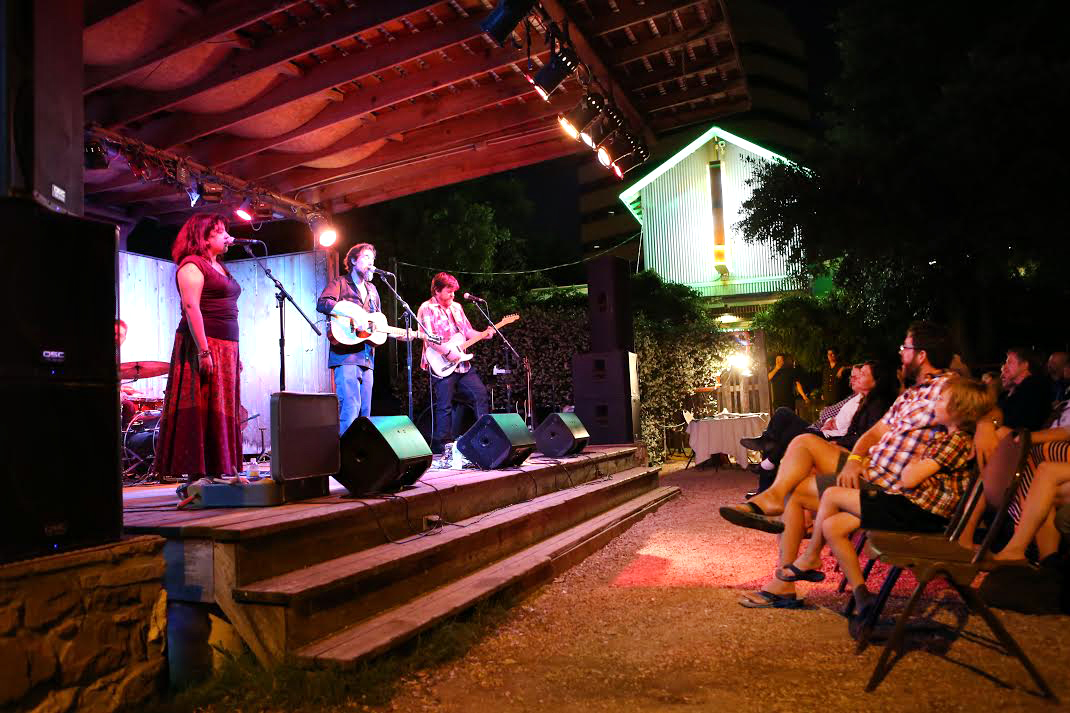 Matt The Electrician performs to an energetic crowd on a Saturday night at Threadgill's in downtown Austin.

← What does Mopac’s expansion mean for local environment?
Austin Transportation Department Seeks To Improve The Drag →