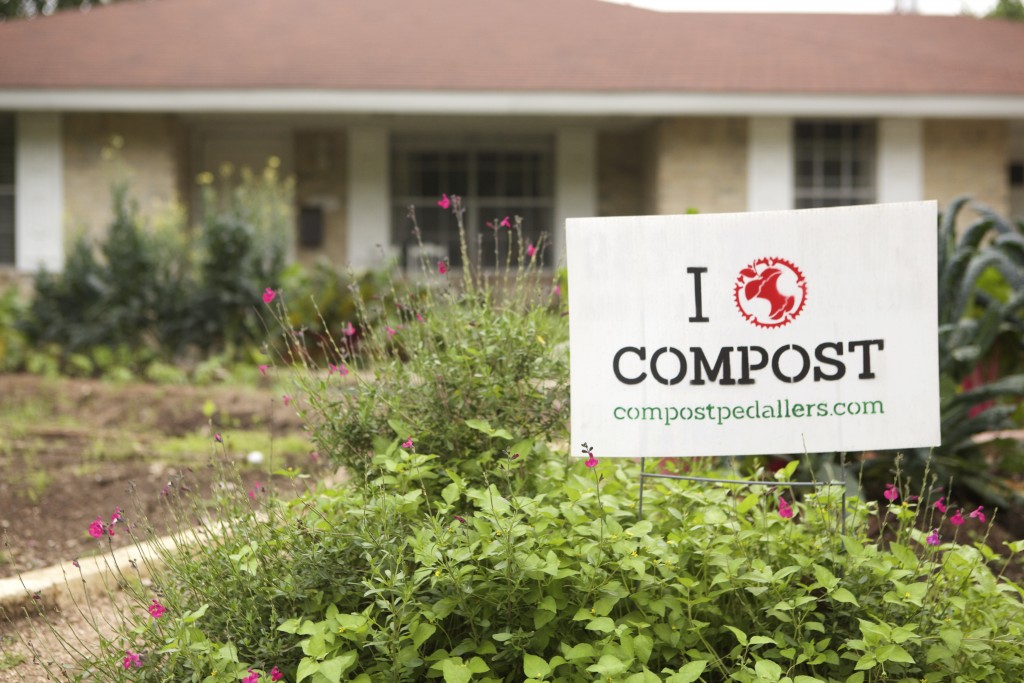 If you see a grubby-looking guy walking away from your neighbor’s house with a green bucket full of trash, don’t worry. He’s not a thief.

Paul Wilson is an employee at Compost Pedallers, an east Austin company that uses bicycles to collect their customers’ compost for a small fee and funnels it directly to micro-farms and community gardens throughout the area.

Wilson moved to Austin all the way from Chicago to work at Compost Pedallers.

“I love getting to see where our food comes from and how we can make it in our own backyards and how we can feed ourselves in a healthy, organic way without having to go to Whole Foods and spend your whole paycheck,” Wilson said. 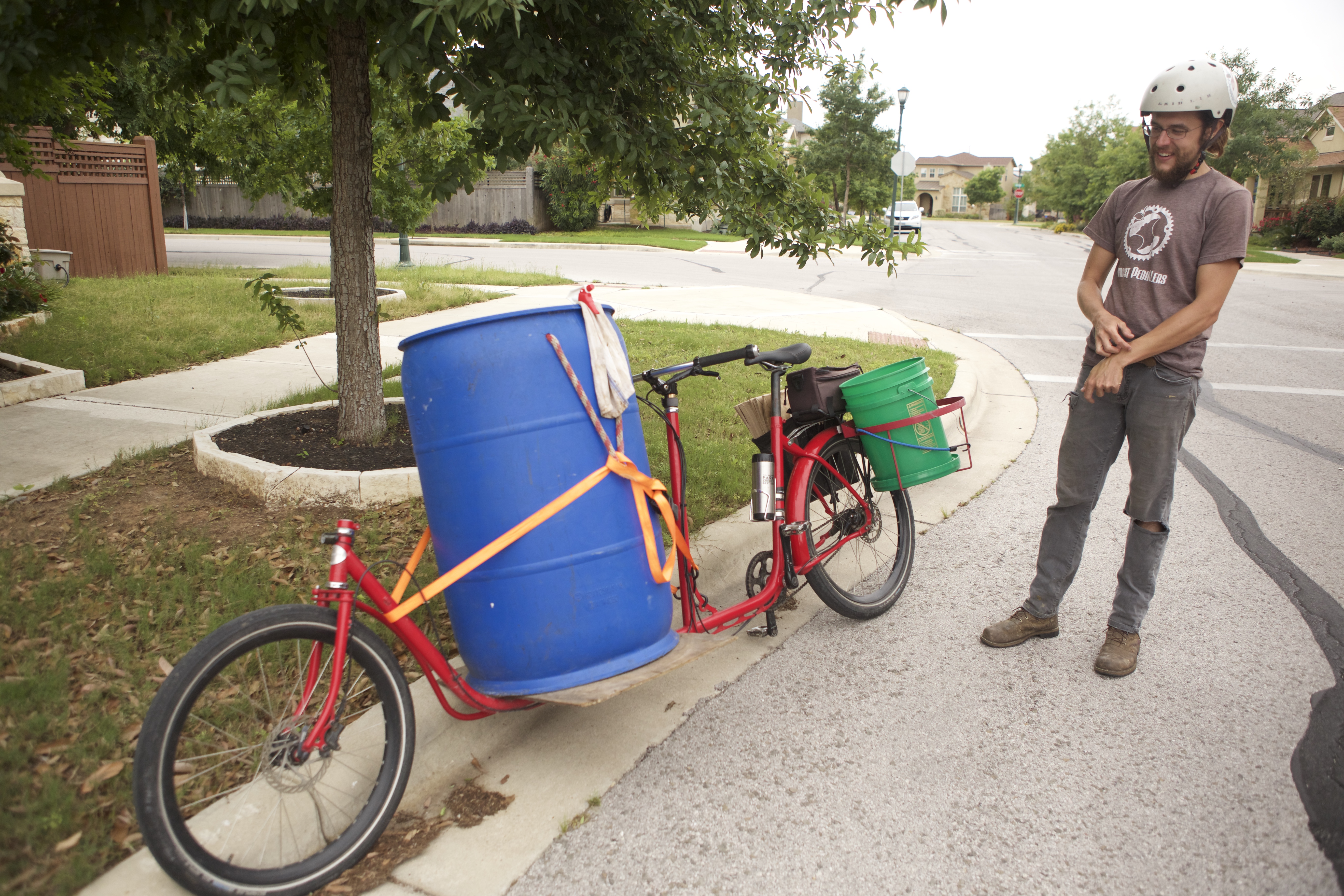 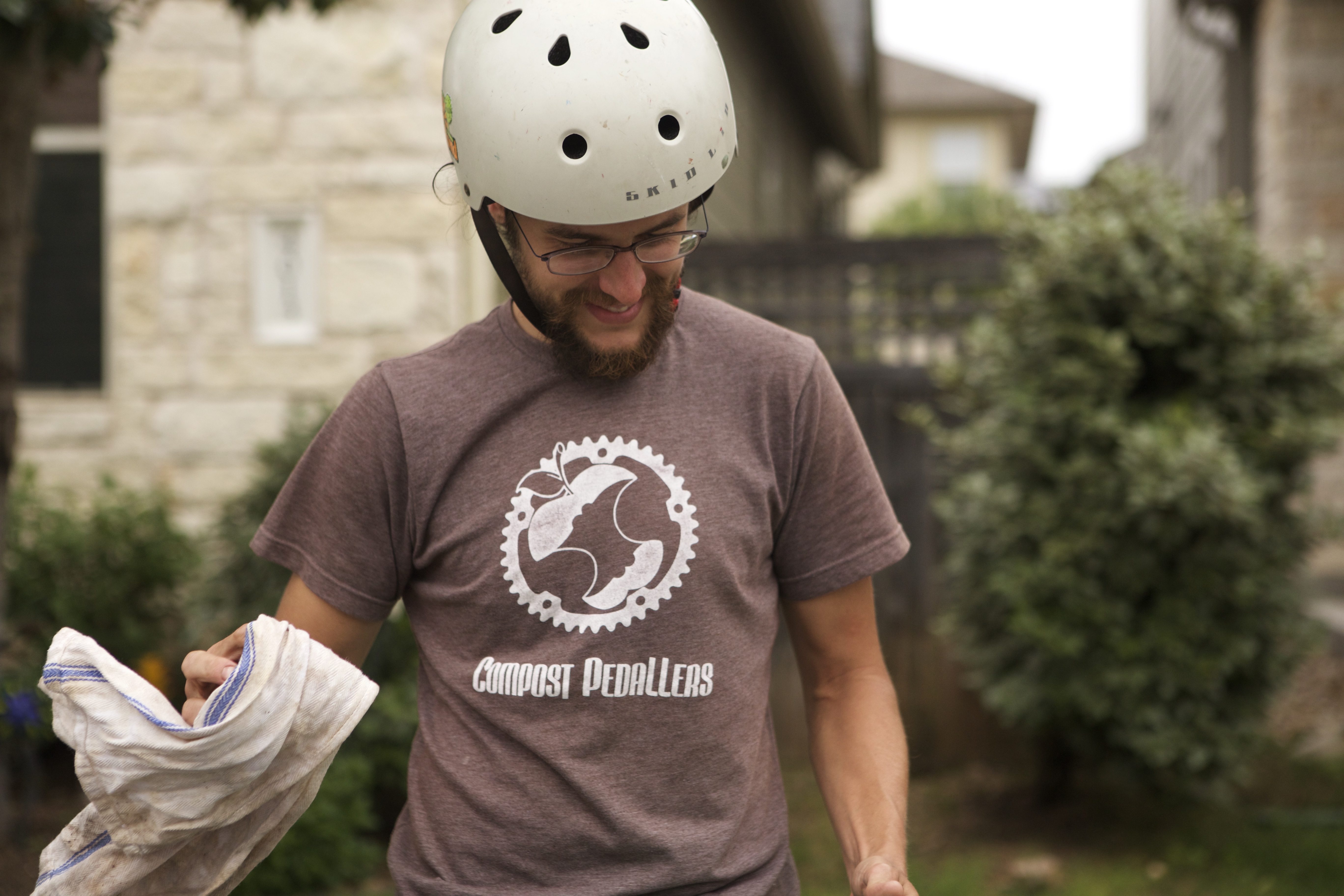 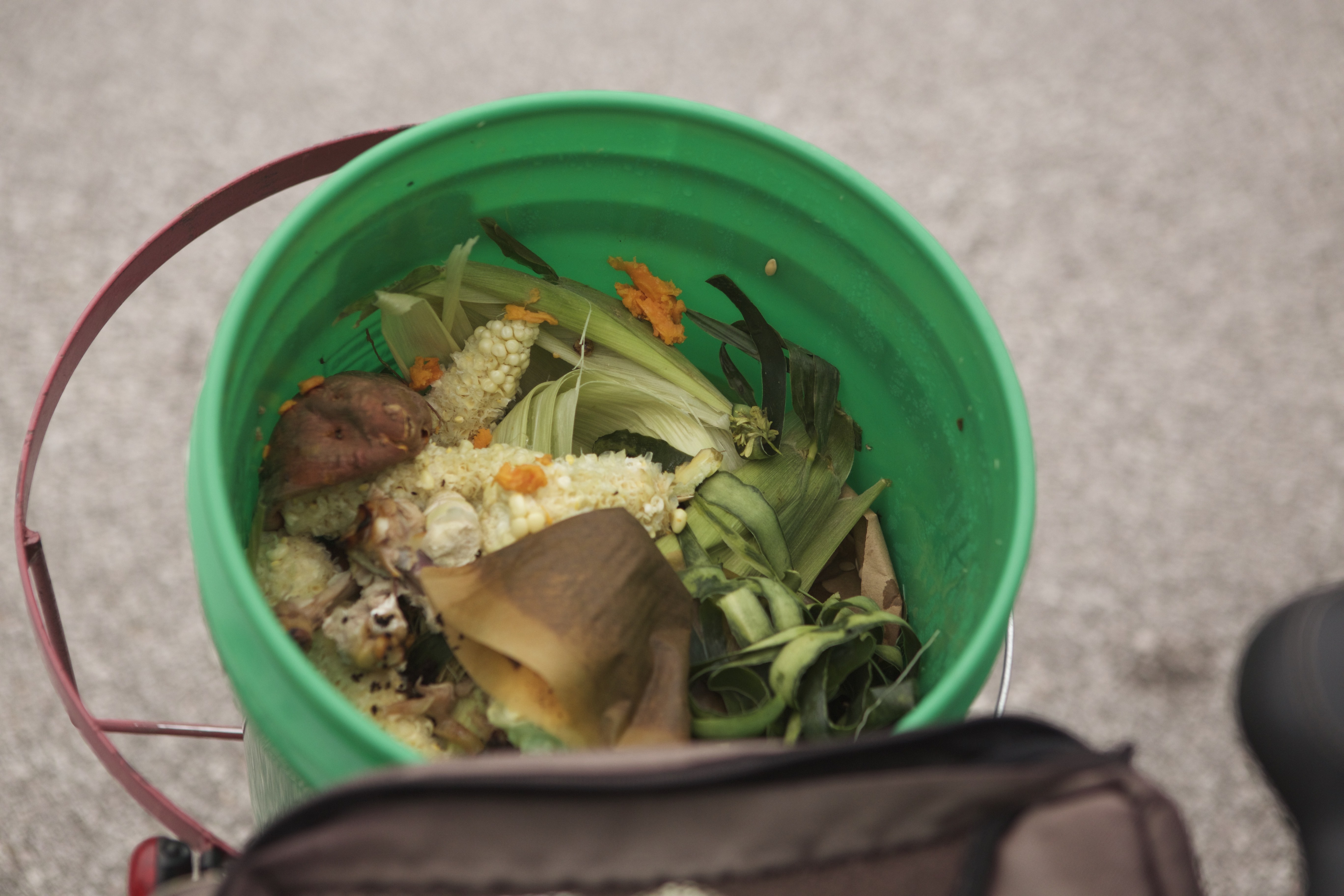 “Compost is anything that was once living that’s not meat or dairy,” Wilson said. “It’s any fresh, organic material, like banana peels or apple cores." 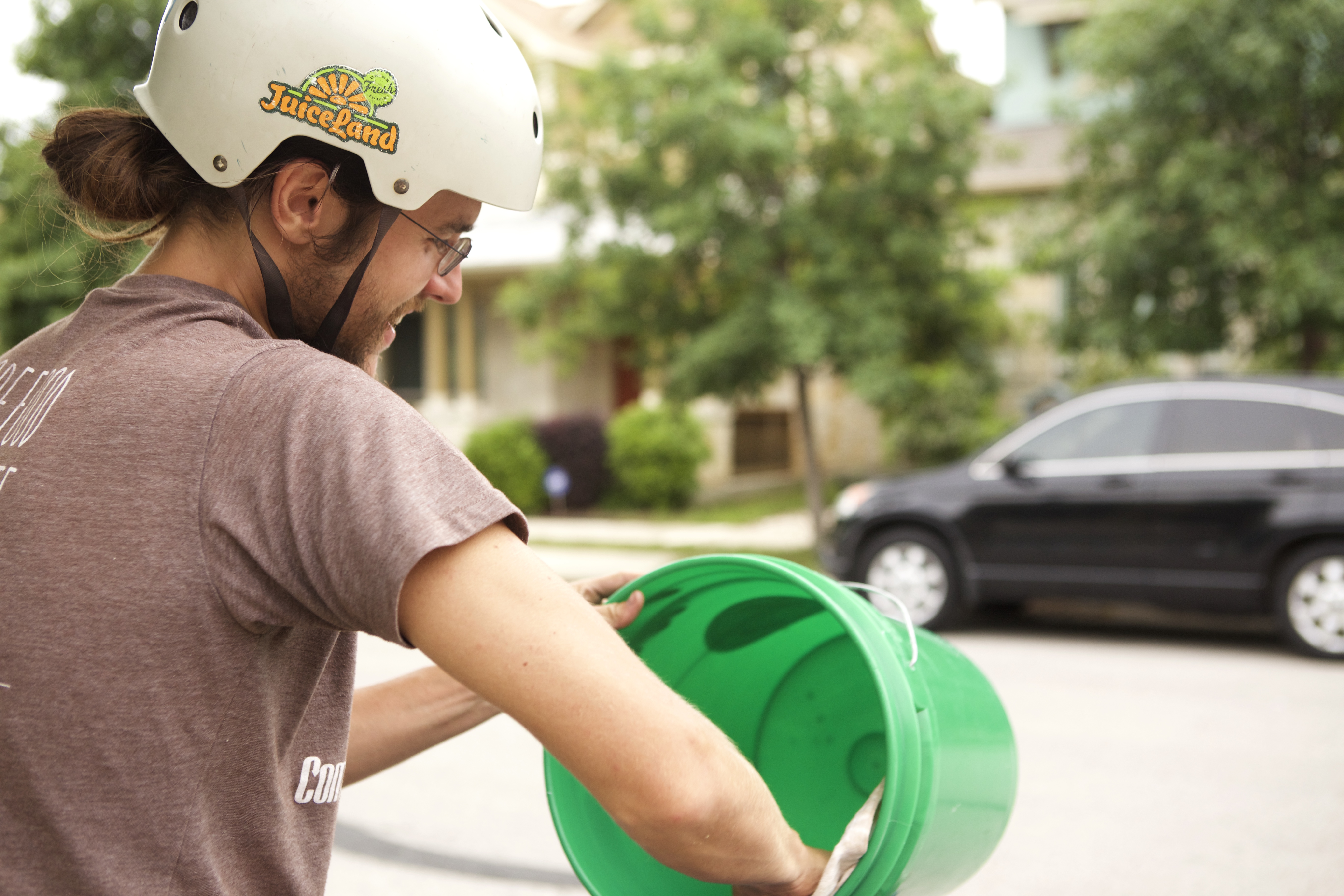 Wilson cleans out a compost bucket to give back to the homeowners. Inside, he leaves a paper bag with a handwritten "Thanks!" on it. 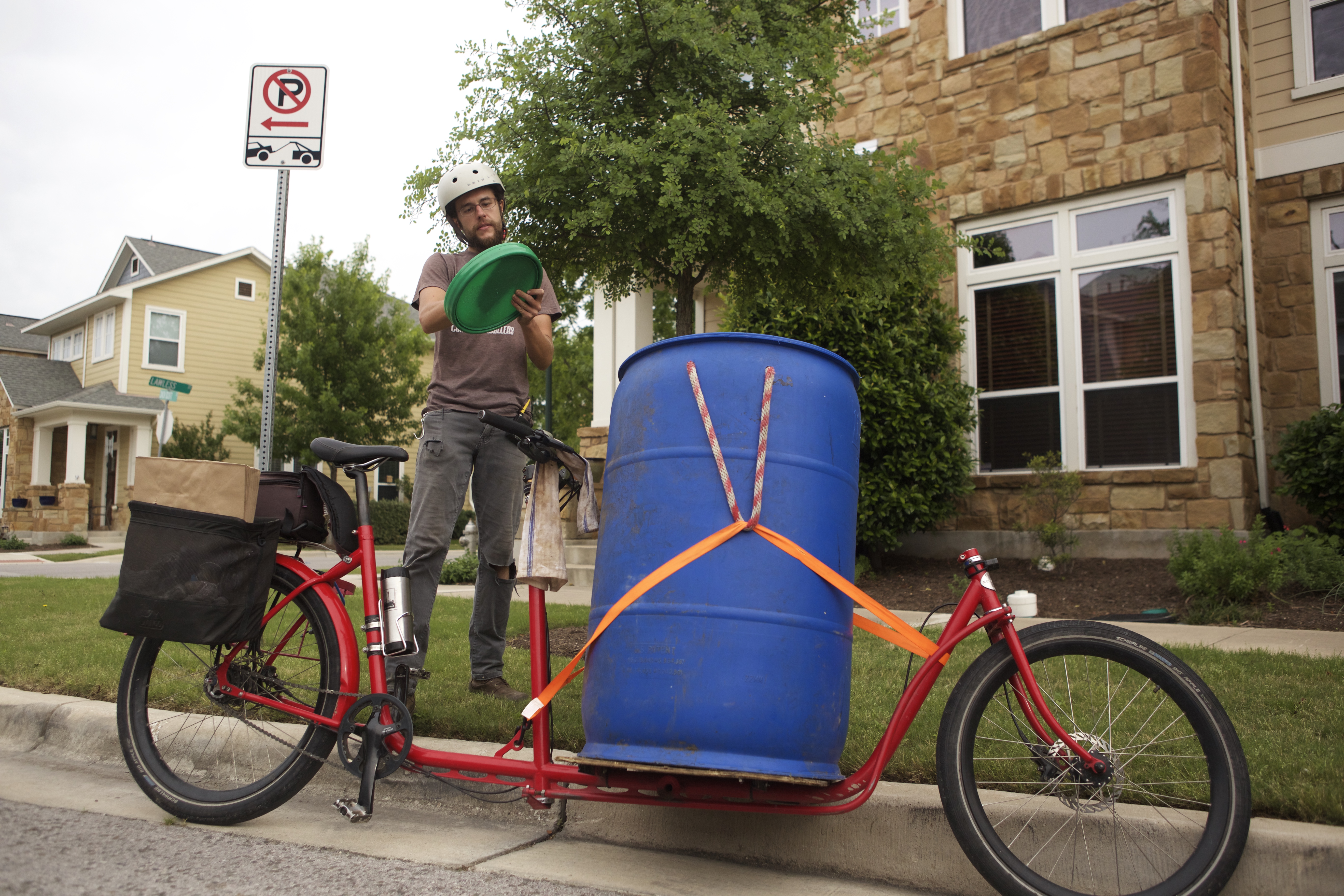 Wilson begins his bike ride over to the local garden, Ten Acre Organics, to dispose of the compost he collected. 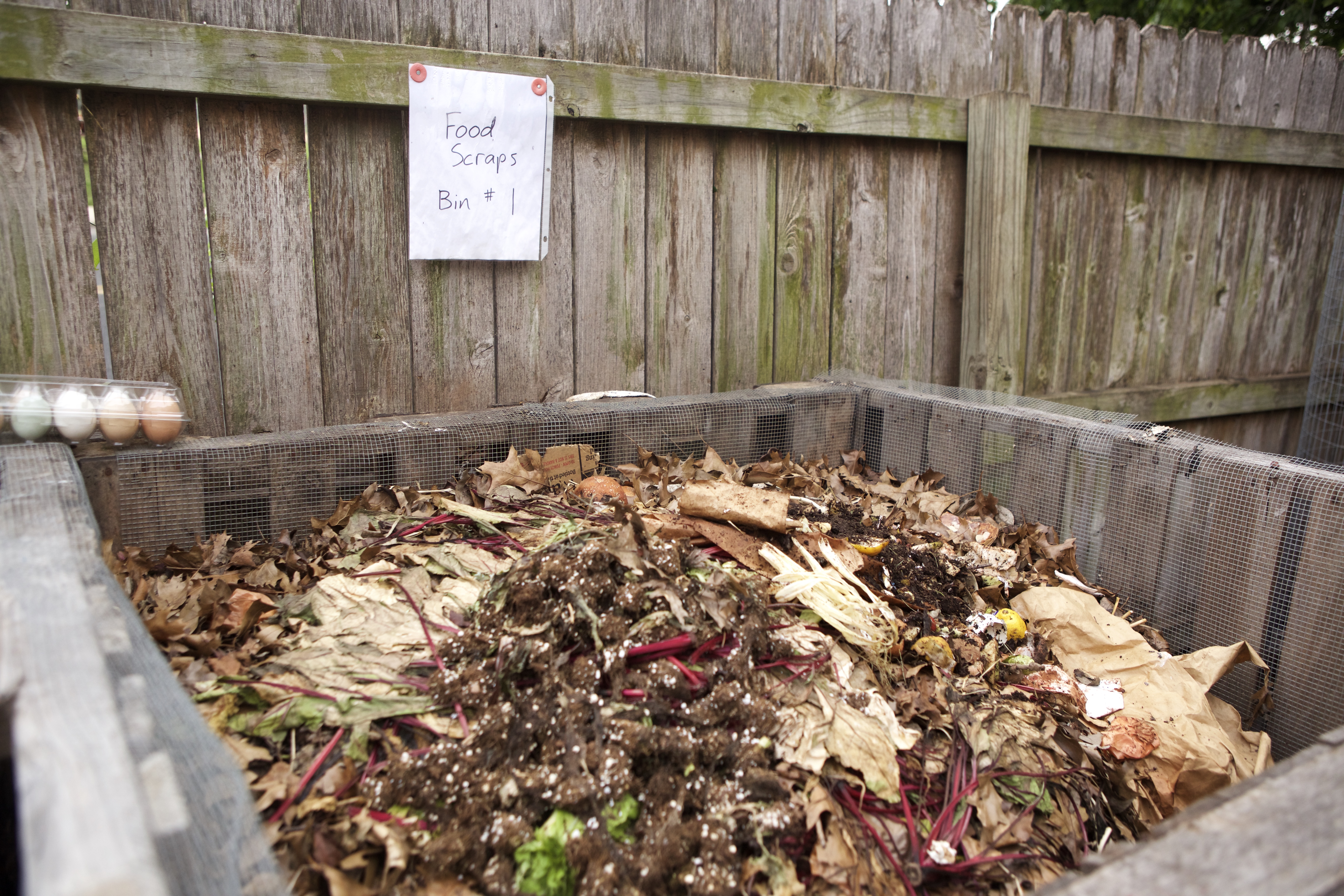 At Ten Acre Organics, compost is piled into three different sections in relation to their stages of the decomposition process. 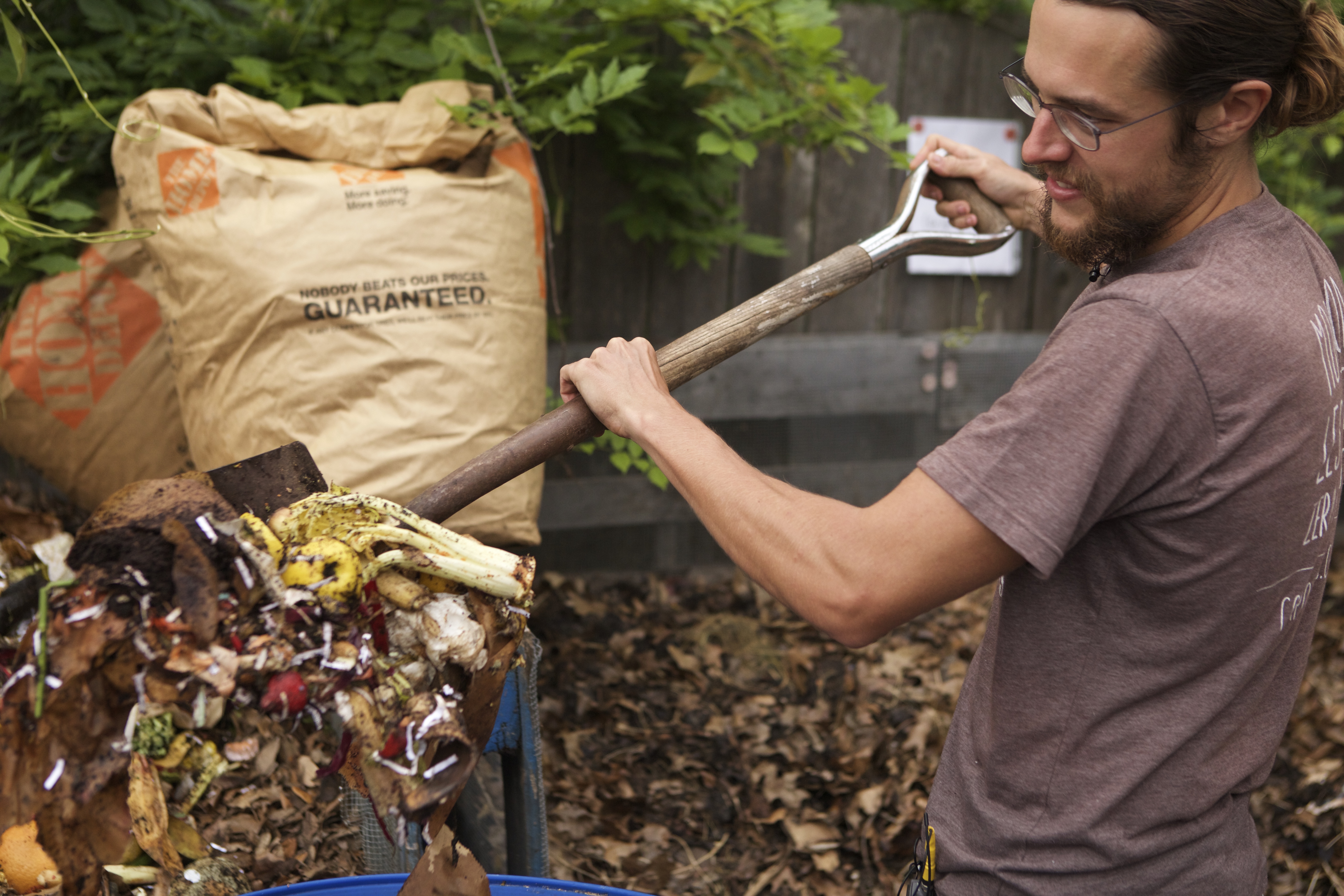 Wilson begins to dump the new compost into its first bin. 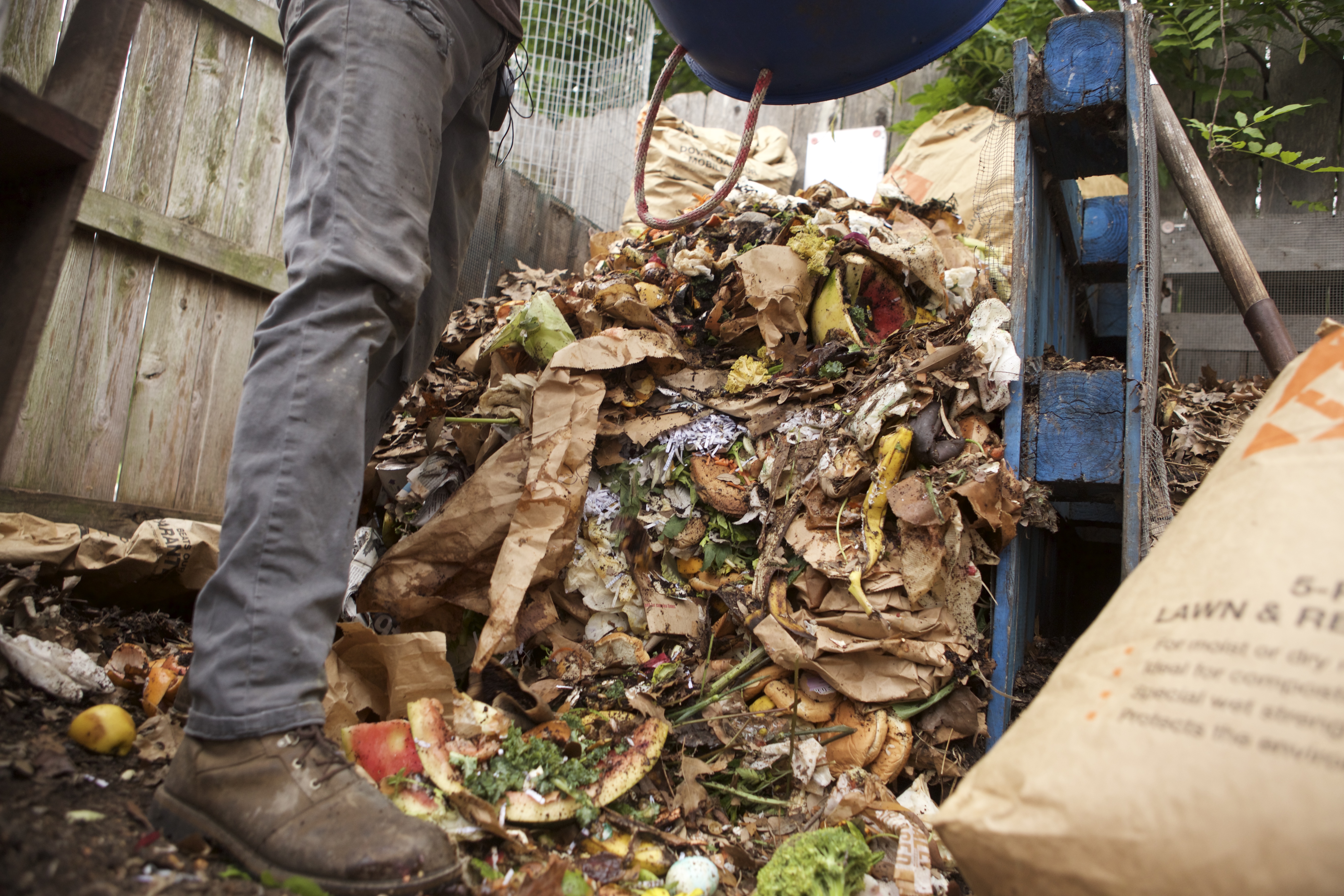 "We've got everything from fruits and vegetables to dog hair and toe-nail clippings," Wilson said. "If it's natural, it can be compost." 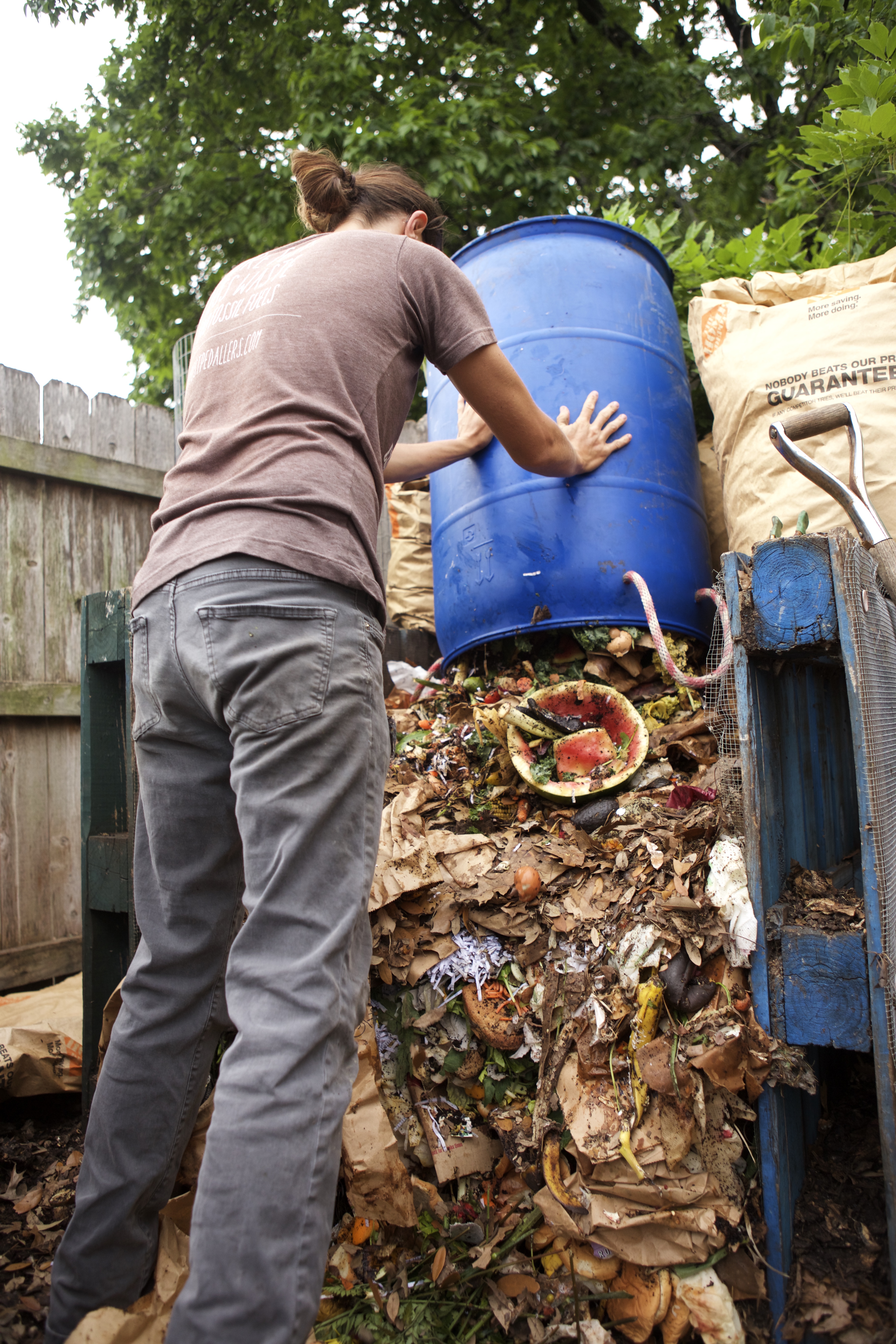 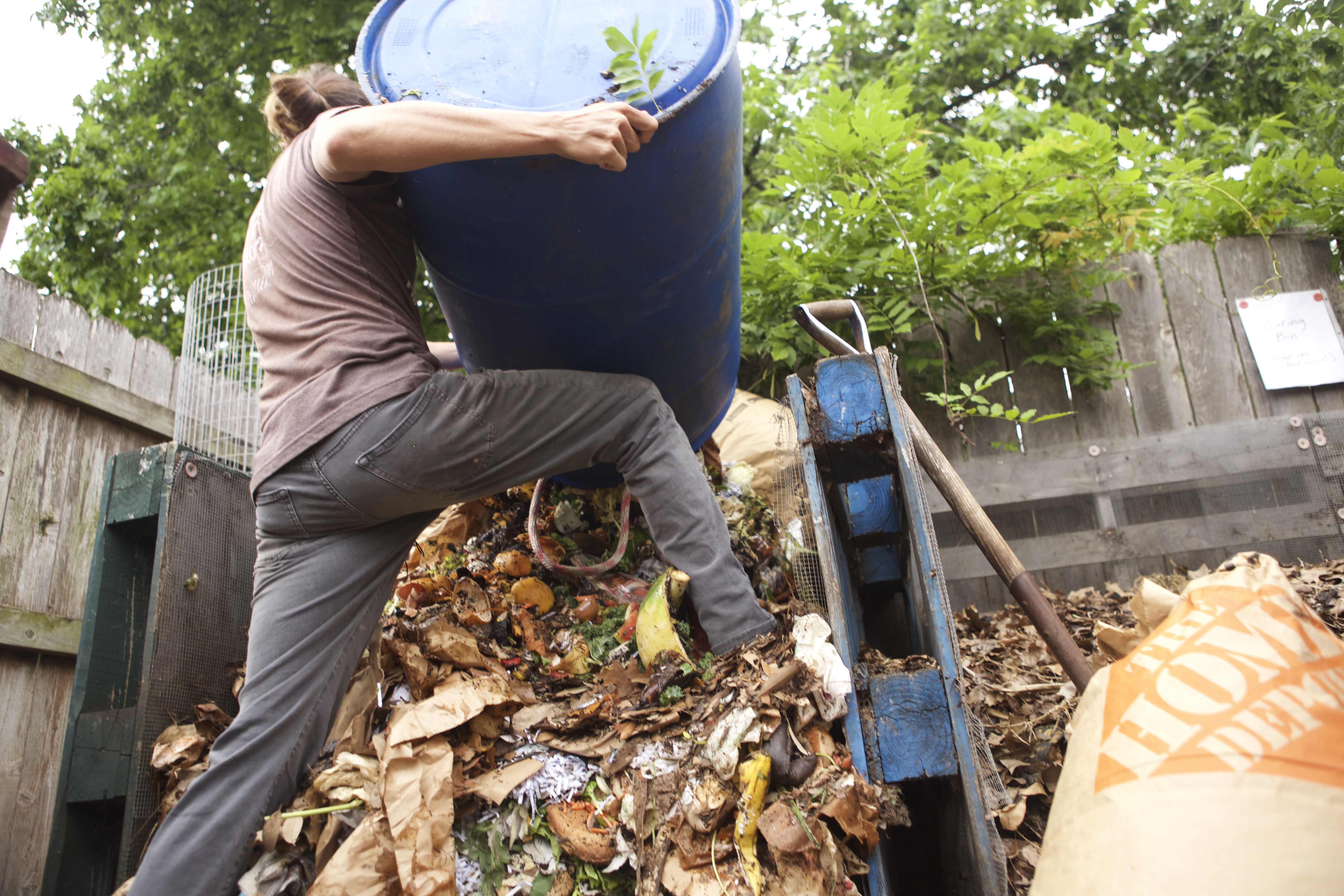 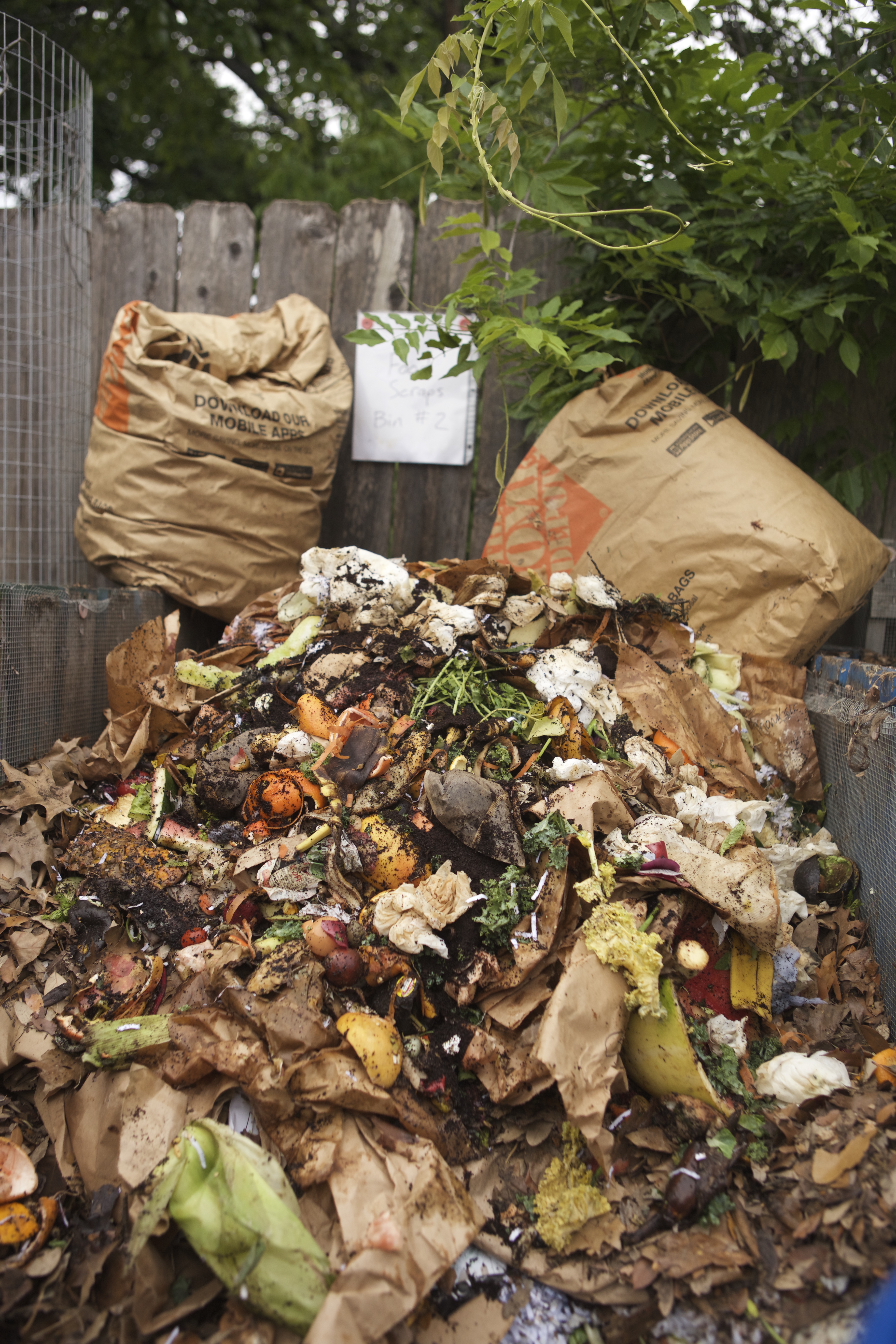 This new pile of compost will stay in this pile for about a month until it becomes decomposed enough to move onto the next bin. 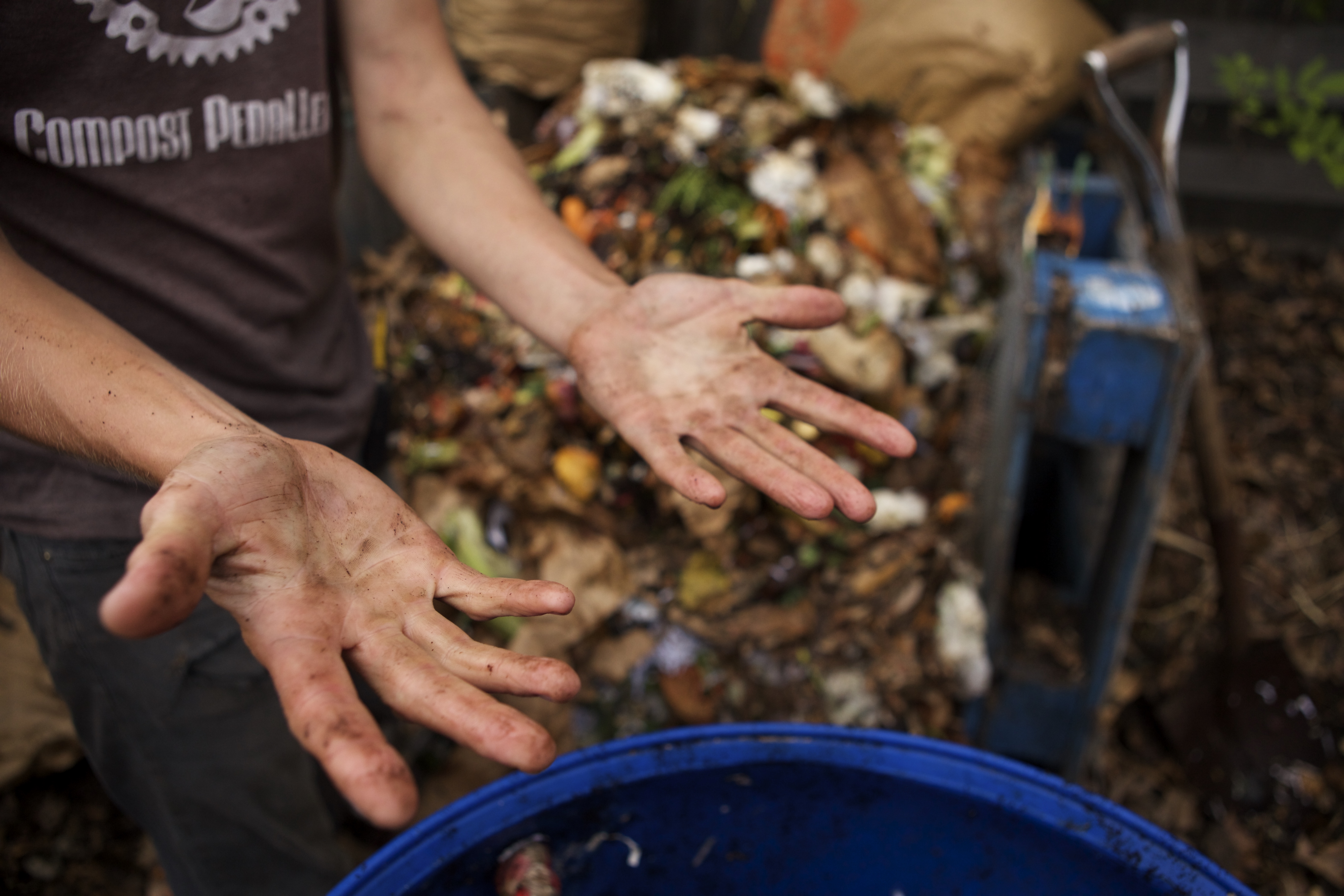 "It's a job where you definitely get your hands dirty," Wilson said. "But it's incredibly rewarding knowing you're helping maintain purely natural environments."

Dustin Fedako, the CEO and co-founder of the company, explained that the impetus behind the venture is to further the idea of sustainable living.

“If we went into your kitchen, and we dumped your trash on the ground, we would find that over 30 percent is not trash at all,” Fedako said. “It’s compostable material. So that means that one-third of the stuff that you’re hauling out of your house into the landfill is actually a valuable resource. We’re here to make sure that you never have to put your resources in the trash again and that you can be part of a system that takes those resources and enriches the community.”

“One thing that makes the Compost Pedallers unique is that we do 100 percent of our collections with bicycles,” Fedako said. “So we’re 100 percent bike-powered. That means that we run on fat instead of fossil fuels.The motto of the company is “More food, less waste, zero fossil fuels,” and that creed is taken very seriously.

“One thing that makes the Compost Pedallers unique is that we do 100 percent of our collections with bicycles,” Fedako said. “So we’re 100 percent bike-powered. That means that we run on fat instead of fossil fuels.

The process is simple. Compost Pedallers asks their customers to collect their compostable materials and place it in the green buckets emblazoned with the company logo that are provided them. A weekly pickup by one of the employees is carried out, in which the organic materials are collected and the bucket is cleaned. The employee will then bike those materials over to the local gardens and micro-farms to be used for compost.

“You’re really just mimicking what nature does at the bottom of the forest,” Wilson said. “Things fall down. Fruits and leaves cover it. It stays the right temperature. It stays out of the sun, it rots, it cooks down and those things go back into the soil for the tree to pull up as nutrients.”

There are few limits as to what is considered compostable material.

“Compost is anything that was once living that’s not meat or dairy,” Wilson said. “It’s any fresh, organic material, like banana peels or apple cores. We always joke that if you shave your dog, you can put the dog hairs in there. You can put your nail clippings in there. I don’t think they will add up to much weight, but pretty much anything that was once living can go into your compost bin.”

The most ideal mix of organic material for compost are “greens,” which is slang for fruit peels, and “browns,” meaning leaves, bags, shredded newspapers and other such things. The materials meld together for weeks and eventually rot into what the pedallers term “black gold,” or compost.

“That is the richest thing you could add to your garden,” Wilson said. “It has the most nutrients.”

The business has recently created a system called “The Loop,” which rewards customers for using their services. For each pound of scraps given to Compost Pedallers, a customer receives a point. Accumulated points can be spent at the Loop Store, which includes goods and services from other local businesses.

The company is a for-profit business, but they have goals beyond just making money. Eric Goff, CFO and co-founder, explained that educating the community is also something that Compost Pedallers strives to do.

“Our bicycles and our actions in the community are a way for people to learn sometimes even what composting is,” Goff said. “From there, most people really want to get involved.”

In the end, Goff said, it’s really about encouraging people to live a new way of life.

“Composting to me is a way to be directly involved in the natural systems of life,” Goff said. “When you compost, you know that your food waste breaks down and becomes a resource, and that’s really exciting to see it happen right before your eyes.”

← Queen visits Whataburger and it was a drag
Next Post →