The Rhythm of Austin

Jul. 30 Arts and Culture Comments Off 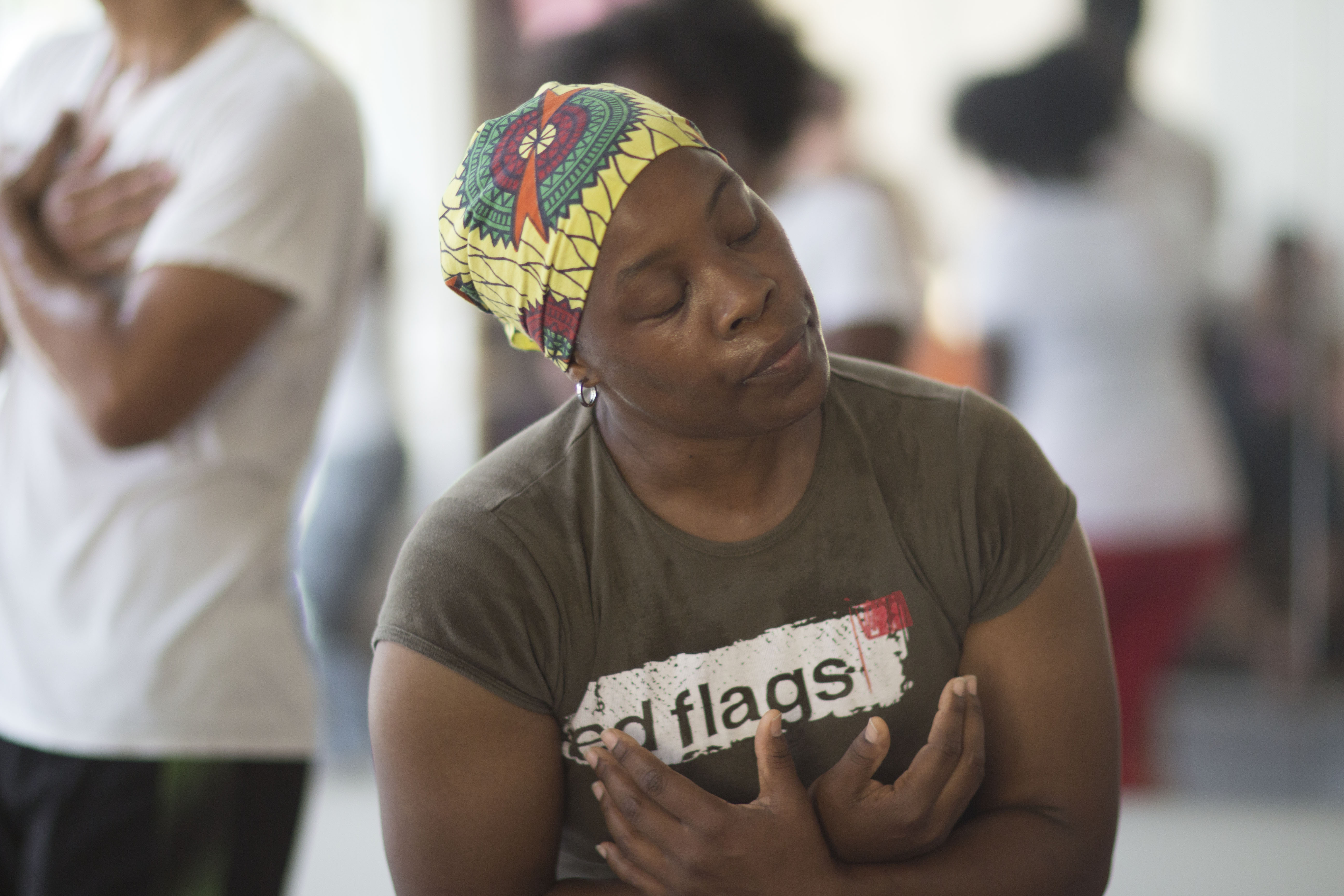 Berry's student imitates cradling the shell of a snail believed to be representative of the Creator as a part of the spirit of Afro Cuban dance. 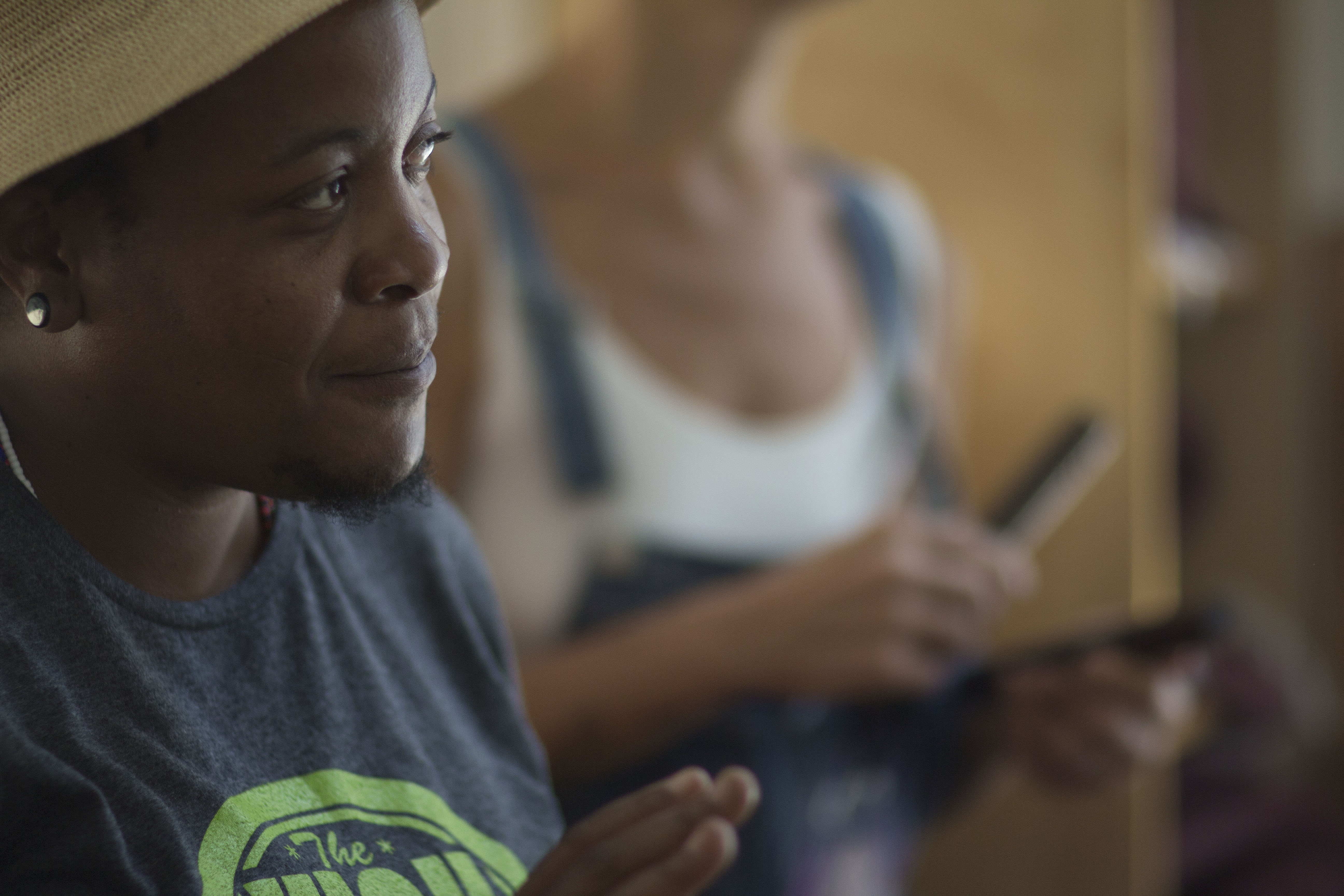 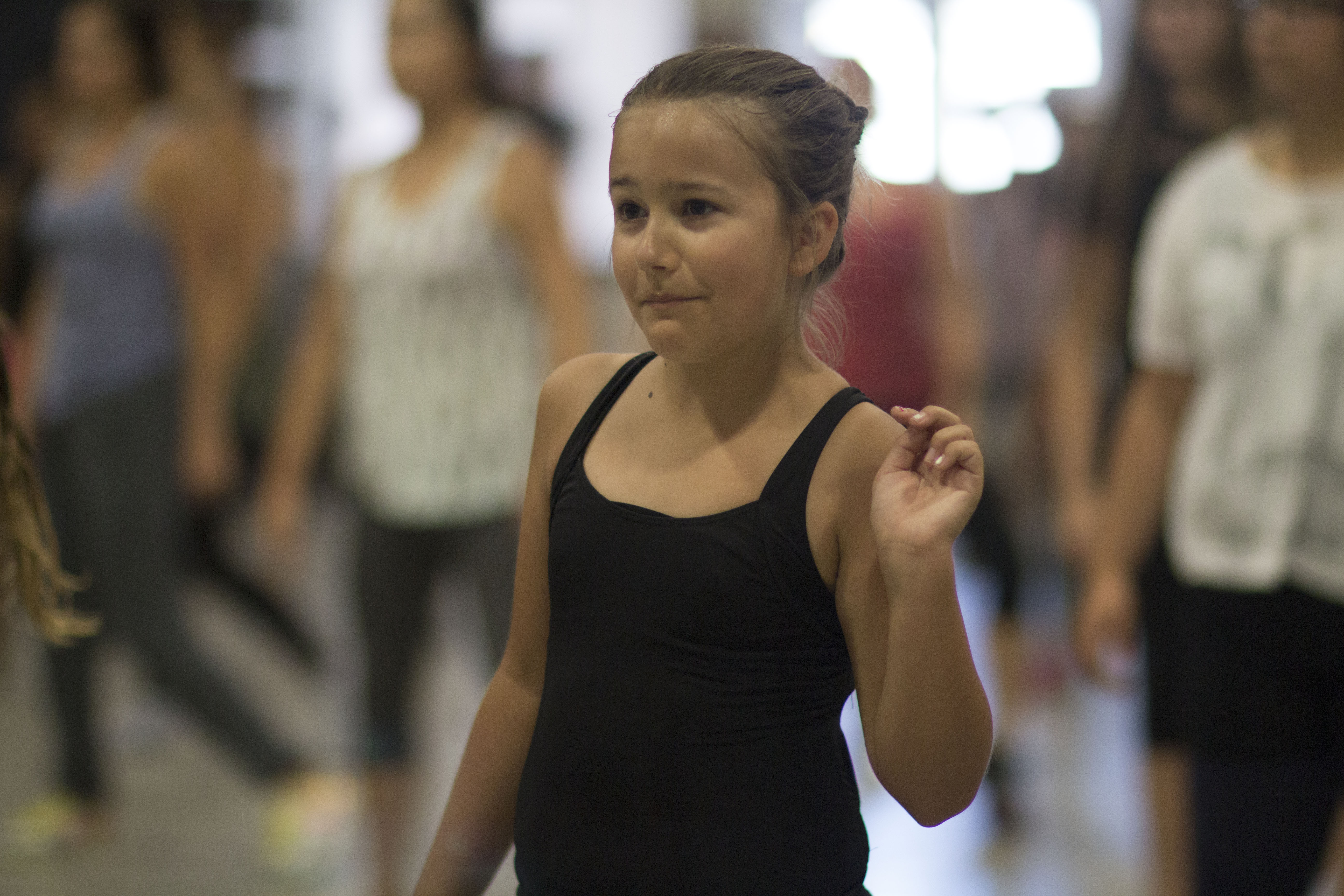 On Saturday, July 25th, National Dance Day was celebrated at Ballet Austin with students of all ages learning the same choreography by the Dizzy Feet Foundation as people from all over the country. 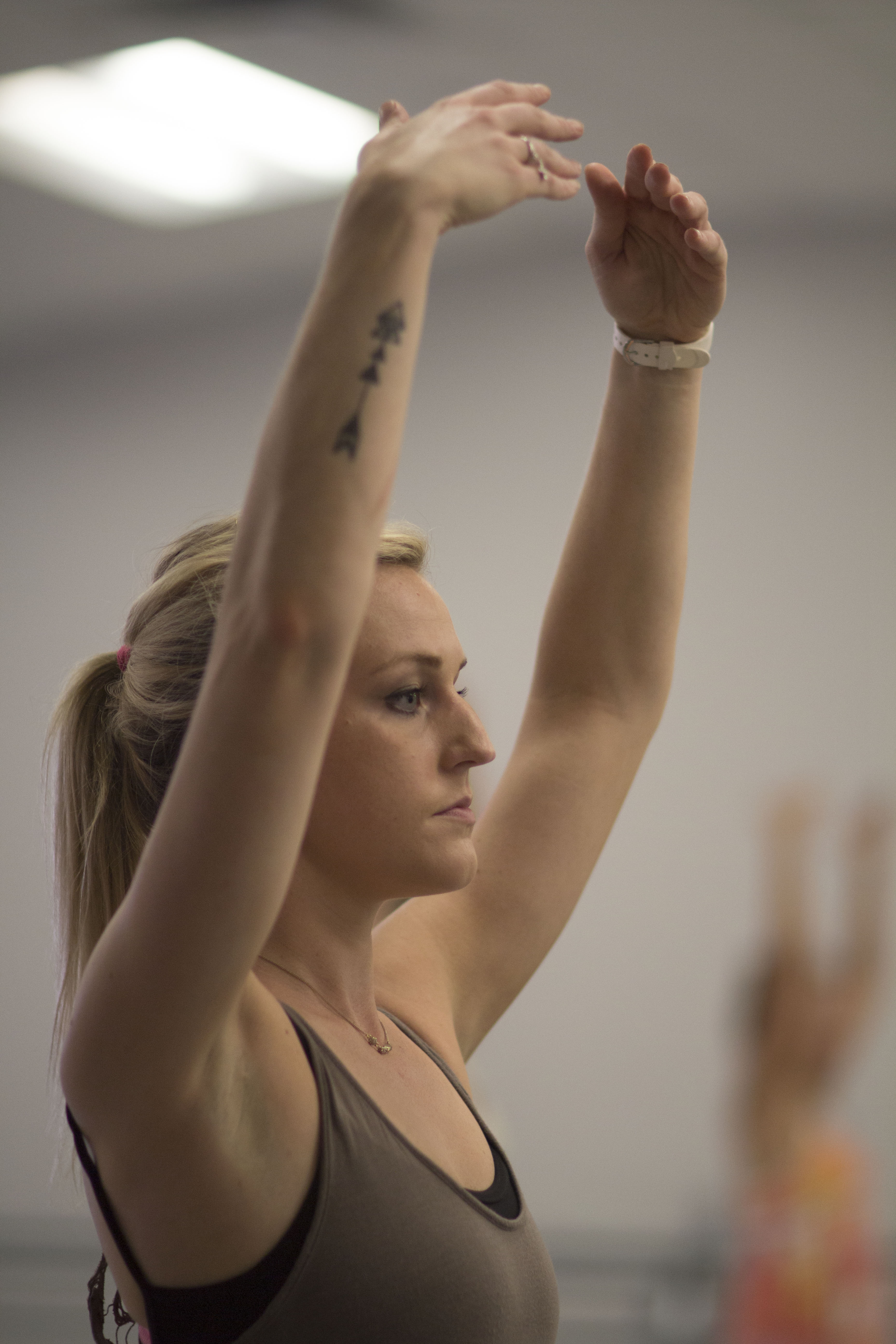 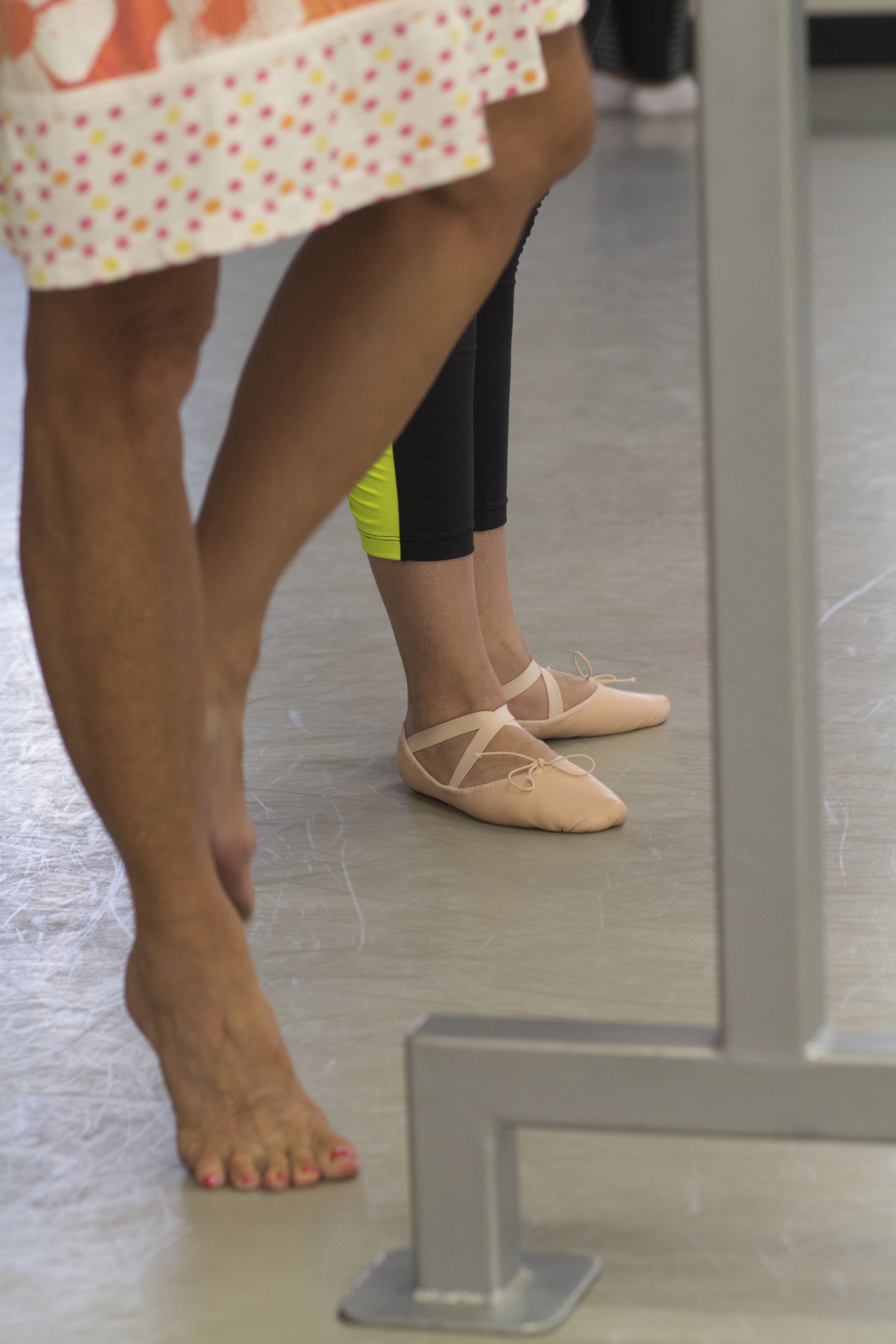 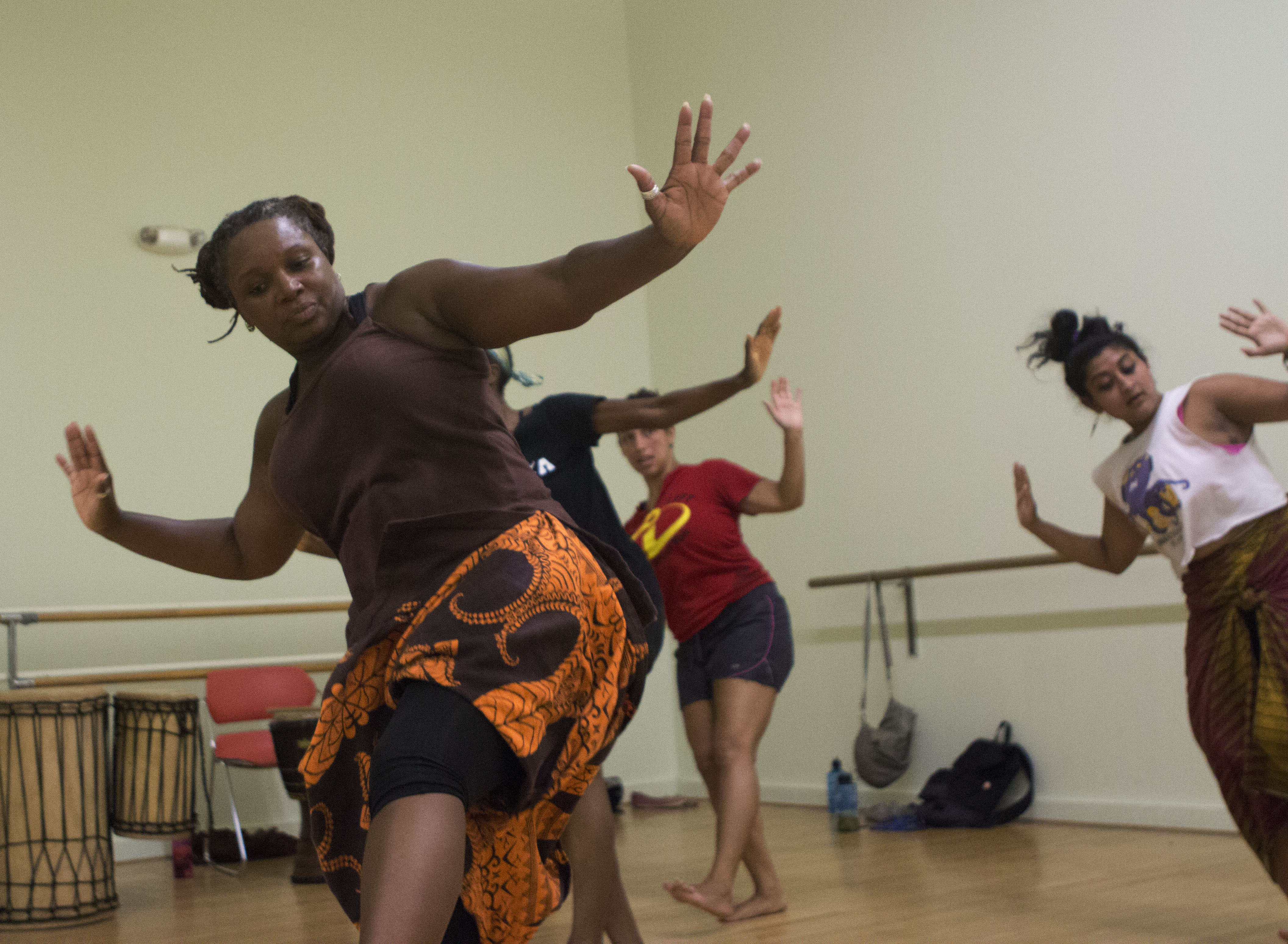 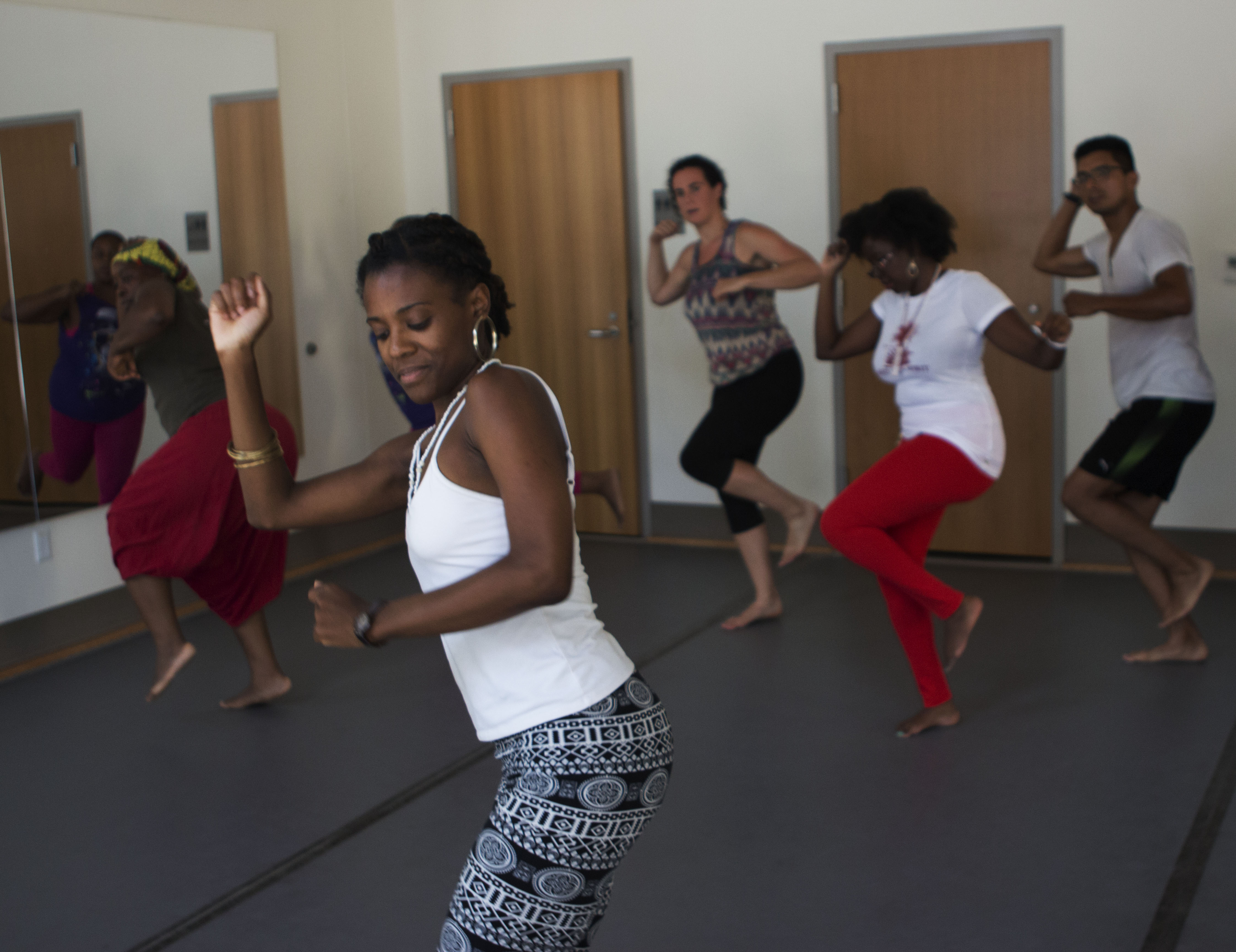 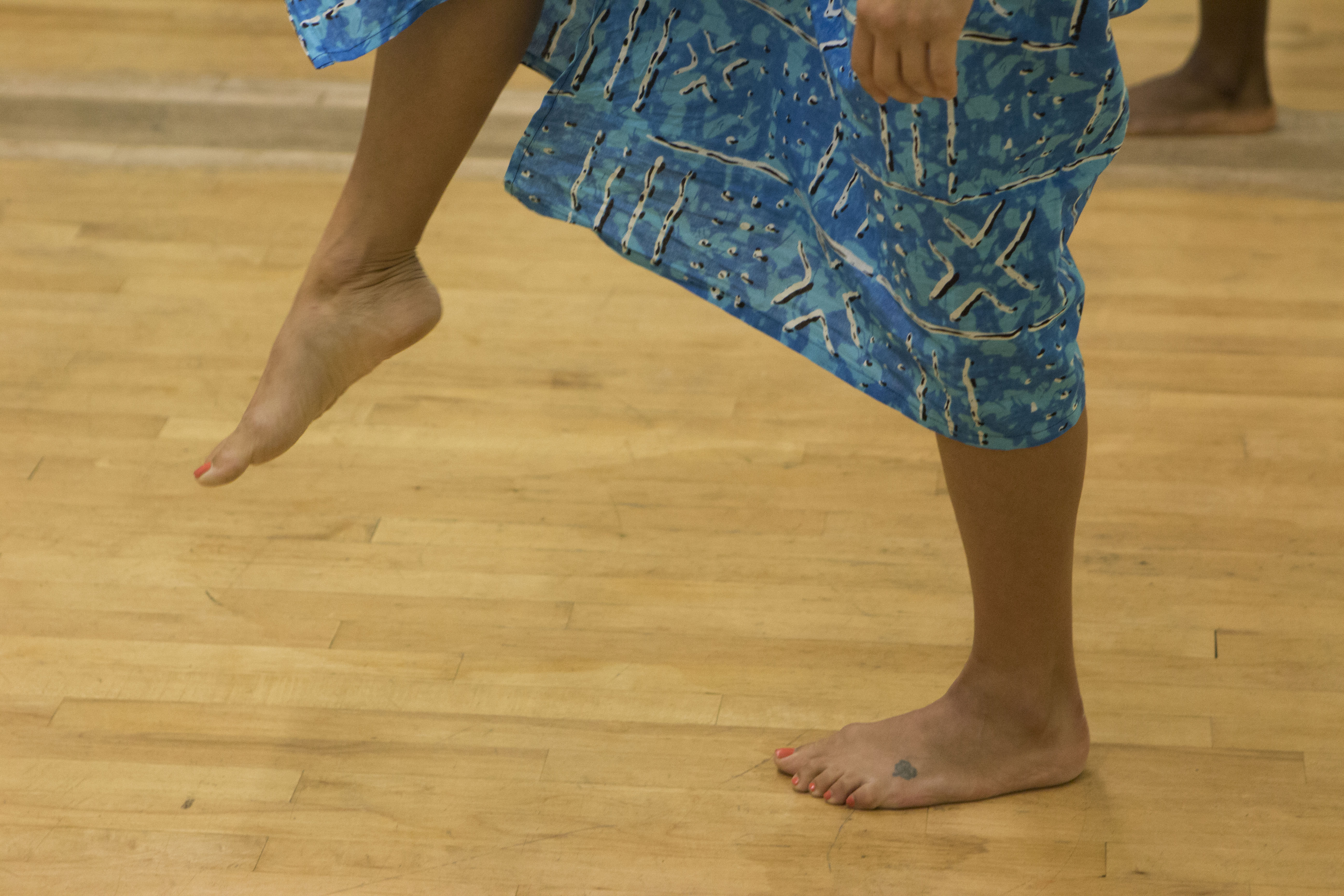 Jamie Vellejo dons her "lapa" which is the traditional West African wrap skirt for dancing.

From Structural to Spiritual, The Dance Community Thrives in Diverse Ways

Compared to other major cities in Texas and across the nation, Austin’s dance community is not as broad and far-reaching. There are under twenty major dance companies in Austin as opposed to New York City, which boasts hundreds of companies and studios ranging from ballet to hip-hop to various forms of African dance. Although Austin’s dance community is small, the people who teach and participate in performances and classes are providing a much-needed influx of vitality and enthusiasm to the community in major ways and redefining the public’s perception of dance in a more personal and experiential way.

Up until recent years, when people thought of dance, the first image that would pop into their minds would be that of a ballet dancer. While ballet is known for its cultural significance in western culture, there are various forms of dance, like Orisha and Rumba, dance forms that have indigenous roots in western Africa, that have been around for much longer and are only recently being discovered and practiced by people on a wider scale.

Maya Berry, a classically trained ballet dancer from New York, who studied ballet in the city as well as abroad in Europe, now teaches an Afro-Cuban dance class in the African-American Heritage Center right next door to Franklin’s Barbecue on 11th street in East Austin. 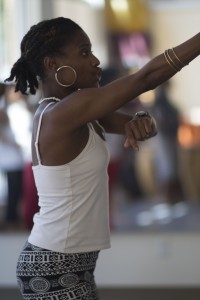 It’s quite a departure from what Maya had spent the majority of her life pursuing. Maya has been dancing from the age of three, with experience in ballet, jazz and tap, “the triple threat” as Maya refers to it. In her late teens, Maya moved to France for conservatory training in classical ballet, but Maya had a difficult time there. “And then, that experience…uh…didn’t go so well. It was very traumatic,” Berry says laughing. “Being a black woman, in Europe studying ballet, there was definitely a lot of scrutiny of my body. “

Seeking a more accepting atmosphere, Maya returned to New York City, where she began studying with the Alvin Ailey Dance Theater, a historically black dance company and school formed by Alvin Ailey, one of the major pioneers of modern dance, who was born in Texas. Maya went on to be a part of several other contemporary dance companies in New York, but soon realized, “I did not like the dance business. I loved dancing, but I didn’t like the business.” Maya went back to school to study the connection between anthropology and dance, and in 2005, decided to focus on Afro-Cuban dance.

Although African Diasporic dance is very different from classical ballet, Maya has brought one major thing from her past to her present: discipline. That work ethic is required in most forms of dance and the people who practice it all have another essential ingredient in common, an intense love for dance. 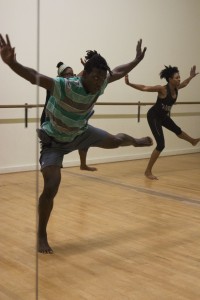 In addition to teaching a house dance class at Ballet Austin, Jason Vaughn also expresses his love of the sport by dancing in Pennie’s West African class.

Jason Vaughn, the house dance instructor at Ballet Austin, has only been dancing for about 10 years. During that time, he has studied and become proficient in many different forms of dance from breaking to hip-hop, to house and various forms of African dance. His enthusiasm and love for dance is contagious, often breaking into a wide smile as he describes his early days studying dance, “I used to drive 45 miles, three times a week, just to learn b-boying.” None of that dedication and sacrifice for the art form would exist without intense love and appreciation for it. When asked to put into words what dance means to him, Jason says simply, after pausing to think, “Dance is love.”

Tonya Pennie, of Lannaya Drum & Dance Ensemble, who practices and performs with Jason, would agree. She has been teaching African Diasporic dance in Austin for over twenty years and has extensive dance training, primarily in West African and South African dance forms. Lannaya Drum & Dance is a multicultural dance company that puts focus on inclusiveness. The company is made up of dancers of varying backgrounds and cultures and seeks to “expose and educate audiences to authentic and progressive interpretations of drum and dance of the African diaspora.”

Dance today as opposed to dance as it has been known in the past has shifted towards a need for a deeper understanding of the art. Knowing the history and various interpretations of indigenous dance forms, to realizing that dance can be a spiritual connector to the deepest part of your soul are ways of thinking about dance that are becoming more prevalent in today’s art world.

The ability of dance to bring communities together is apparent in the small but bustling dance community in Austin. People of all walks of life and from all over the world are now represented in Austin and are infusing their love and commitment to the art form in companies and schools from Ballet Austin to Lannaya Drum & Dance bringing previously little-known dance forms to the spotlight. 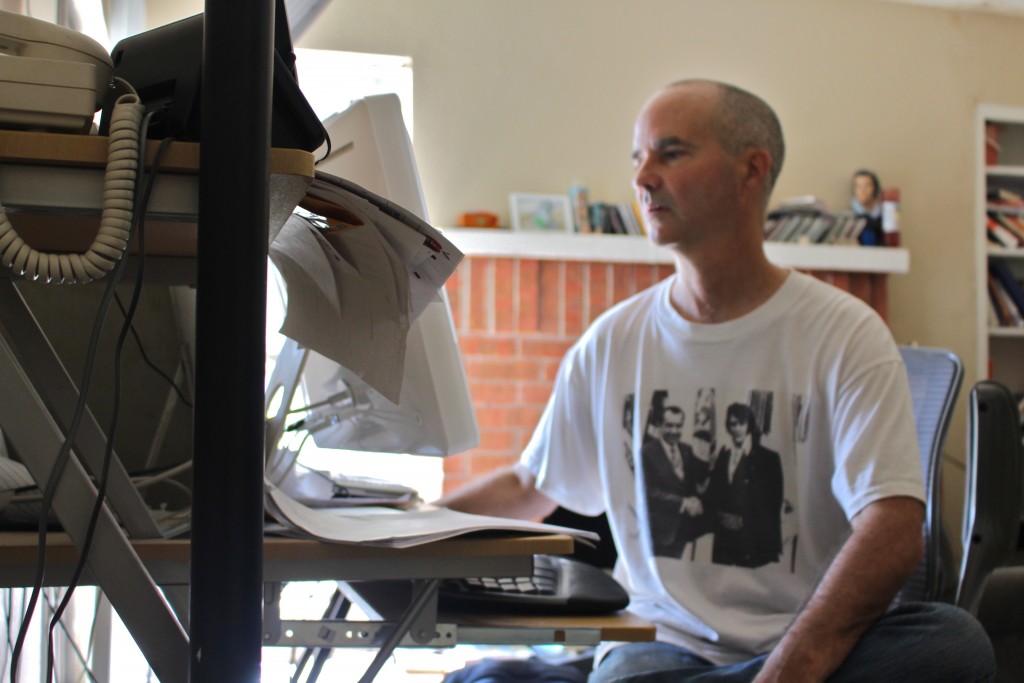 Reviewing and printing papers is part of Steve Adams’ job as a writer and writing coach.

“[The cloak] was still warm from him, and smelled of the way brick feels when it has been baked by the sun.”

Read the above carefully, and imagine a cloak smelling the way brick feels. Or birdsong sounding the way purple looks. Or the word “Tuesday” tasting like dark roast coffee when it rolls off the tongue.

For most of the population, these are the fumes of fancy. But for a small fraction, it’s a concrete and perennial experience. Inter-sensory associations like these are not the makings of a disorder – but of a neurological phenomenon known as synesthesia.

According to research done at the University of Washington, synesthesia affects less than one percent of the population, and is a result of “cross-wiring” in the brain. Neurons and electrical signals that are supposed to be restricted to one sensory area cross over into others. 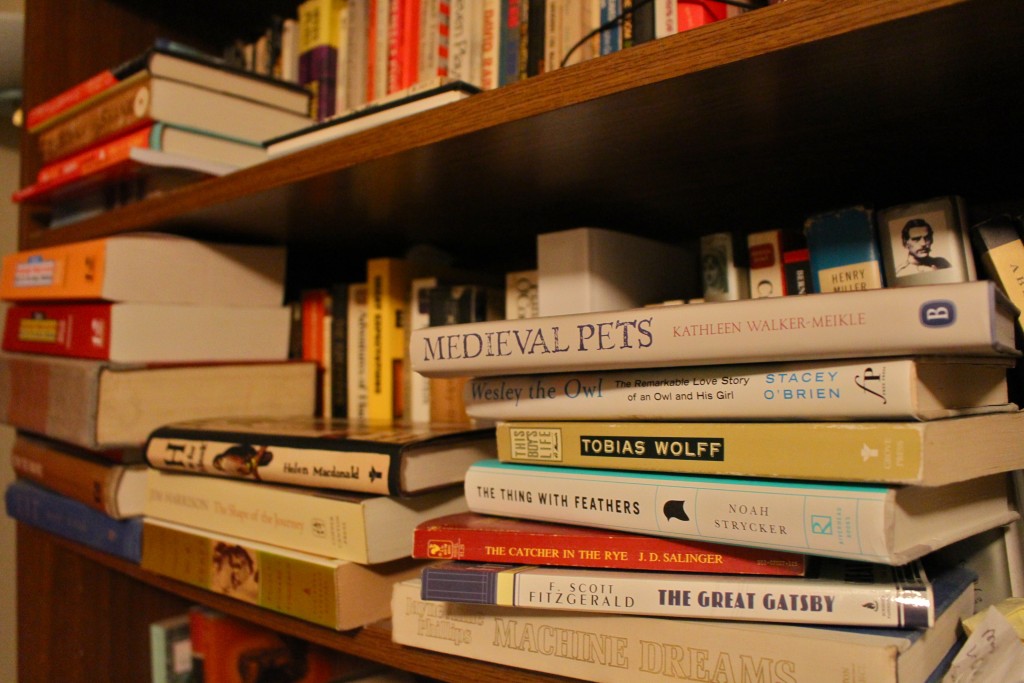 Adams owns a large book collection. You can find books laying all over his apartment, but also some resting on bookshelves.

Maureen Seaberg, guest on PBS and author of “Tasting the Universe: People Who See Colors in Words and Rainbows in Symphonies,” said that brain scanning solidified research in the field.

“For the first time, it was provable and real,” Seaberg said. “Early pioneers like Dr. Larry Marks and Dr. Richard Cytowic deserve much credit here.”

Dr. Cytowic, known for bringing synesthesia into mainstream science in 1980, said that synesthetic experiences are: involuntary, long-lasting, memorable, and emotional.

But these experiences are unique to each person. For writing coach Steve Adams, certain numbers manifest themselves in bursts of color and personality.

As a pursuant of words, Adams spends much of his time in bookstores and coffee shops. He works one-on-one with published writers to improve their skills when he’s not submitting his own work to literary magazines across the country. 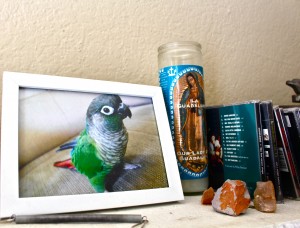 Scooter was part of Adams life for 16 years, until his death. Scooter was Adams number one fan when he played the guitar, especially when he hit the high notes, said Adams.

A winner of the 2014 Pushcart Prize for his memoir, “Touch,” Adams can’t think of the numbers one through 10 without some heady associations.

For example, the number two is red and as feminine as Scarlet Johansson. Ten is white and male.

“It feels like I’m seeing them on a stage,” he said. “It’s like they have this persona they present to me, and then they go backstage and have their own private lives.”

Adams wasn’t aware that his loaded perceptions had anything to do with cranial cross-wiring, until somebody on Facebook commented that their number six was red.

It was at this point that Seaberg, whom he met in a writers’ residency program, called Adams out as a synesthete.

Studies show that the trait is often hereditary, and Adams handed the label to his mother, Jo Adams, who had also dealt with lively numbers since she was a child – but never knew that there was a name for her experience.

“I didn’t know. I just sort of knew I had a play-thing with the numbers. They were little people to me,” Jo said. “But Steve is just so creative. I think that has something to do with it.”

This creativity is a part of Adams’ identity. 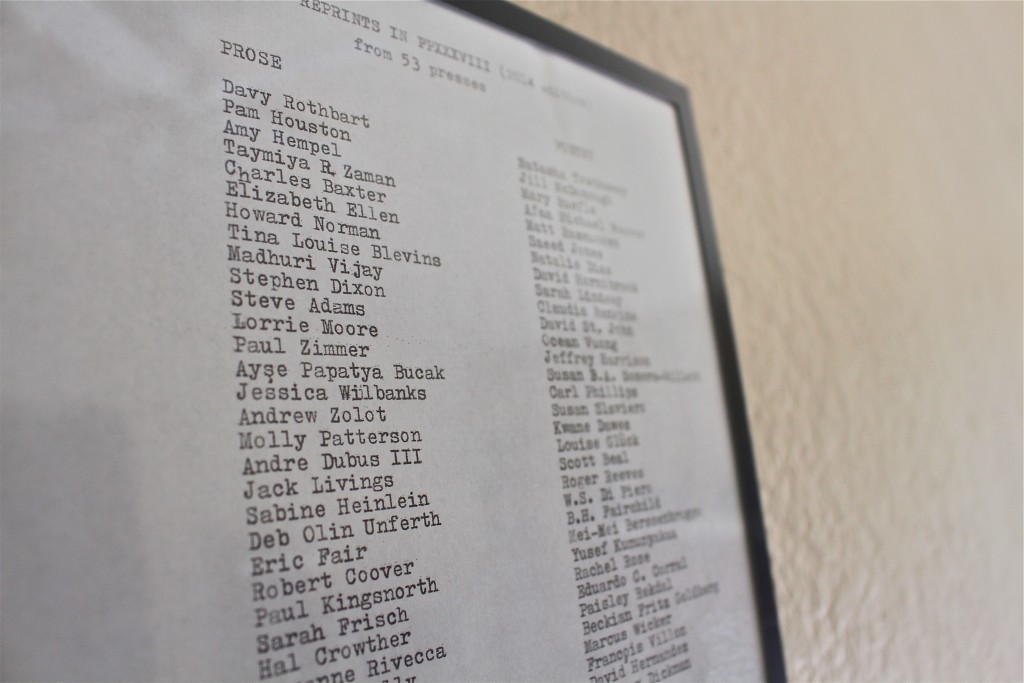 Steve Adams memoir, “Touch,” appeared in the Pushcart Prize XXXVIII 2014 – This is the list of all the winners who were published. Adams conserved the list and displayed it in a humble frame, which hangs on his living-room wall.

Day in the Life

But as he furthers his writing career, Adams discovers new facets of his life that might have to do with his heightened perception. 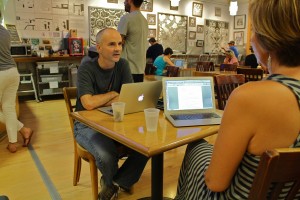 Before the writing tutoring session begins, Adams and Zellmer warm up by chatting about their day.

“If I’m working on someone’s novel that’s in three acts, I can visualize the shape of it, I can see where it’s moving and maybe where there’s a gap.”

“I see the notes popping out in front of me, in the pattern of a staff, like, pow! pow! pow!”

And birds flying through the air.

“I have this thing with birds now. I had a parrot for 16 years and I hunted birds as a kid. So I see how they move through space and the patterns they make. It’s incredible.”

In the digital age, there are ways to find others sharing similar experiences.

Since synesthesia is a newer branch of study, interest groups and communities are also on the green side. There are a number of websites and Facebook pages that synesthetes can communicate with each other through, as well as a subReddit for “Synesthetes Unite!”

A more prominent society, however, is the American Synesthesia Association, established in 1995. The association puts on conferences, and provides the latest news and discoveries on its website. 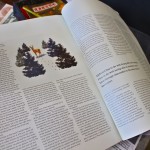 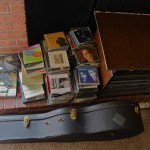 Music, like books, is a big part of Adams life. Adams has been playing the guitar since he was 11 years young. 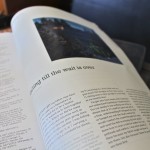 Waiting til the wait is over – The article reflects Adams childhood relationship with his father. Learning how to hunt and learning how to keep still, was the strategy Steve needed to hunt the best prey of birds. 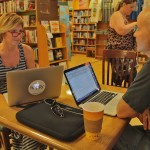 Left: Stefani Zellmer, is one of the persons Steve Adams, right, provides writing tutoring lessons to at Book People. “She’s like the basketball player and I’m the coach,” said Adams, “Today is practice day,” added Zellmer. 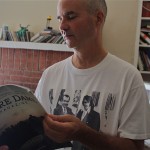 Steve shows off Notre Dame Magazine, where one of his latest memoir was published on July 6.

The group’s mission is to foster and promote research on synesthesia, and to provide a means for synesthetes to be in contact with each other.

Seaberg said that more organizations like these are needed, especially to focus on the education of young people with the condition.

On a similar note, Adams said that synesthetic experiences are like doorways of perception that could be used to help children find that they have other ways of thinking.

But while there may be future implications for synesthesia in society, research is ongoing. Even Cytowic himself first referred to the phenomenon as a “disorder” – now a disproven term.

And while the origins of synesthesia are still in debate (Adams feels that it can be taught to an extent, while Seaberg is on team “Born That Way”), the desire for community is still present.

Jo Adams said that mutuality between synesthetes is beautiful and important for those who feel alone in the world.