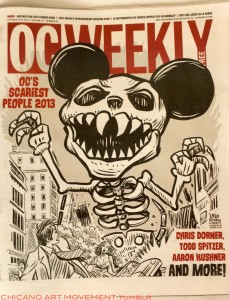 One cartoon shows a skeletal likeness of Mickey Mouse tramping through a city Godzilla-style. Another shows a black mother embracing her child, fretting over what could happen during his walk to the grocery store.

Though cartoons, they are weighty in meaning.

Lalo Alcaraz, the name behind the pen, is a 21st century king of ethnic cartoons. Hailing from Los Angeles, he continues the tradition of mid-1900s artists like Gus Arriola, whose sepia comic strips served as an outcry of the Chicano community.

Influenced by Arriola’s work, Lalo, too, has risen up to represent. He has laid hold of the baton and continues the fight for the comedic Chicano voice. 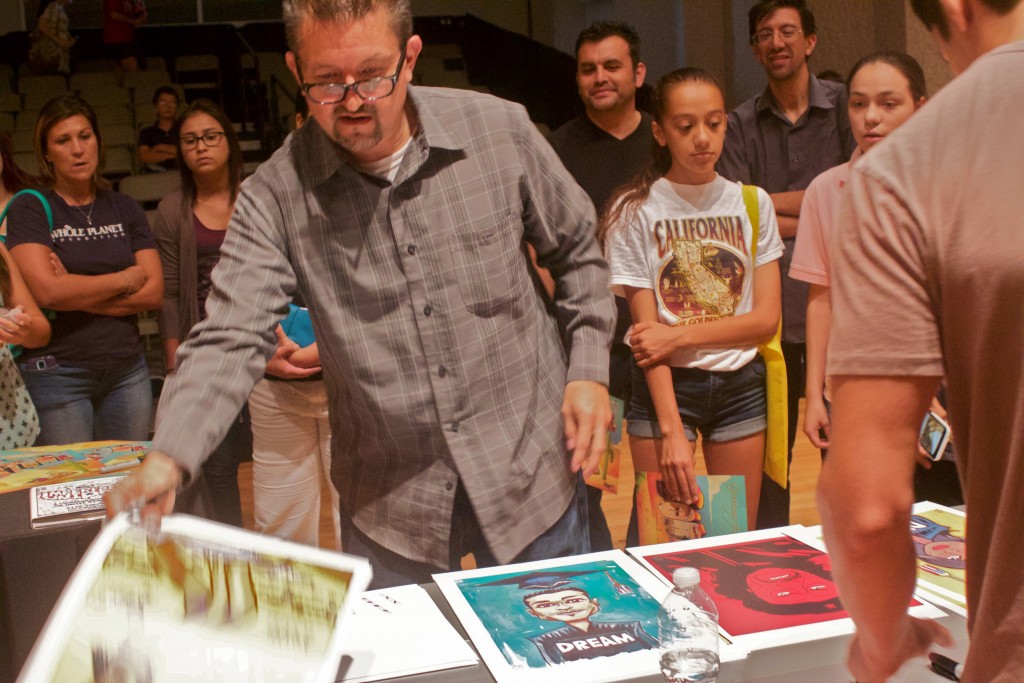 Lalo displays several Political posters of recent cases of immigration and racism in the U.S. He sold these posters to teens and adults for $10.

“[Alcaraz] has always embraced the word pocho,” Ruth Samuelson wrote in a Columbia Journalism Review article, referencing the term for an American-reared Mexican.

As such, Lalo has a foot in both worlds.

The first nationally-syndicated pocho cartoonist with his strip, “La Cucaracha,” and a FOX network show on the way, his sphere of influence is vast – starting with an objective approach.

“A good comic strip has a lot of characters, so you can spread personality traits among them,” Lalo said during a Q&A in Austin, Texas.

And he indeed has a sundry array. Part of his method is to have a multifarious lineup of personas to carry the weight of his message – like the roach, taco vendor, and slew of timeworn señors out of “La Cucaracha.” 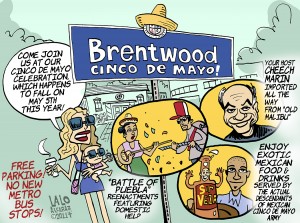 “I like to think that my work pulls people in and makes them think about the issues of the day,” he said. “Stuff we’re not discussing, but should be.”

Lalo also spreads his characters across a varied cluster of mediums and forms. He is encyclopedic in his approach: print, online content, satire, political cartoons, and even network television, with “Bordertown” premiering in January.

In the current event realm, he takes trendy news and gives it his own touch, making a meme or a quick scribble out of political flare-ups.

For example, Lalo’s portrayal of the Charlie Hebdo attack bulleted across the web – an attacker pursued by the angry ink pens of united cartoonists.

“If I see something super viral, I’ll jump on it,” he said. “That’s what cartoonists do; we follow.”

Bobbie Moore, retired professor and illustrator at The Village Voice in New York, defined what an effective cartoonist looks like:

“As a successful illustrator, bring your point of view as strongly as possible – with humor – to whoever wants to see it.” 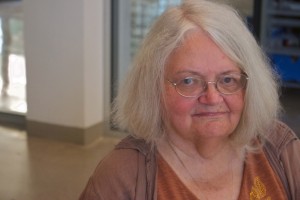 Bobbie Moore, was an illustrator for The Village Voice for 20 years when she lived in New York.

Through his myriad of channels, Lalo does just that, putting an imaginative twist on hard news.

Though Lalo’s speech bubbles are rife with political content, his artistic style also conveys a message.

“My philosophy for comics is that if you can explain it visually, that’s your best goal. I put thought into how my characters look and why they look that way.”

Bobbie gave modern ‘toonists a good poke in the eyeball, commenting that she often sees dissonance between comic-speech and the drawings they’re paired with.

“A lot of times, the style doesn’t fit the message. Meaning has been torn away from the visual content,” she said.

But Lalo’s illustrations are bug-eyed and colorful with simple aesthetics. And the backgrounds of his strips are busy with houses and street scenes. These two elements make sense for heavy implications imparted by jokey characters. 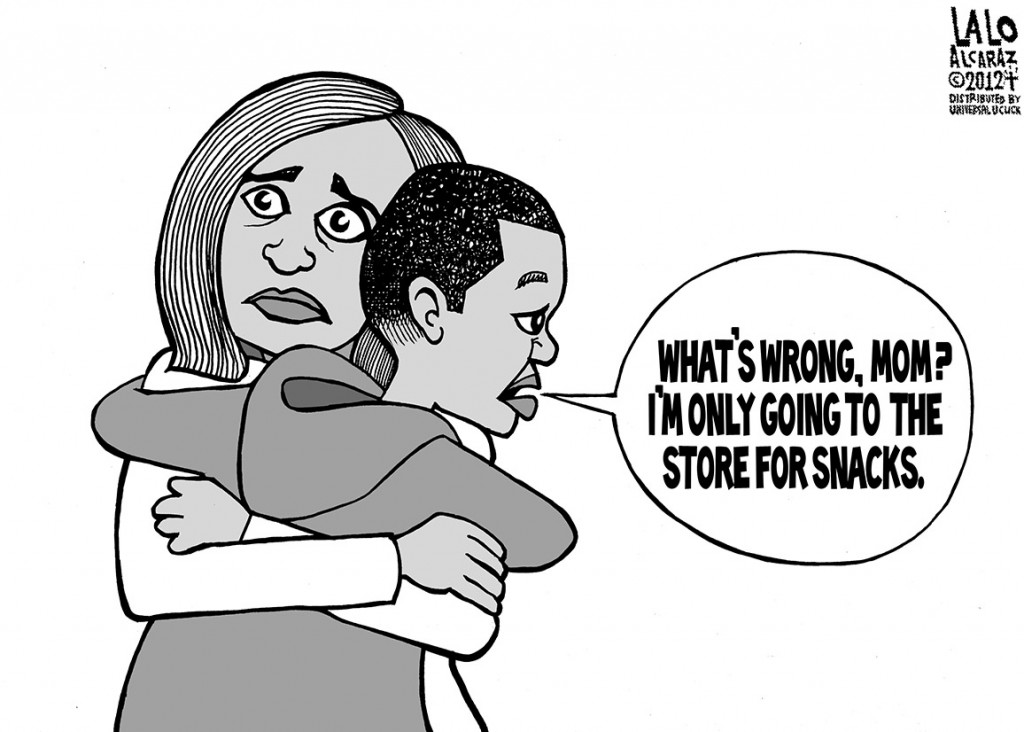 As a contrast, Charles Schulz of “Peanuts” is minimalistic, with fewer characters in each frame, and a mostly empty background.

Bill Watterson of “Calvin and Hobbes” is wordy and philosophical, with planets and dinosaurs jutting in at strange angles.

In his essay, “The Theory of Comics and Sequential Art,” Will Eisner made a pithy statement: “Comics communicate in a ‘language’ that relies on a visual experience common to both creator and audience.”

Lalo works out the linkage between words and pictures, and also between himself and readers.

The joining ligament? An engaging social and political context.

Flashback to the 40s, Arriola was cartooning when the flood of Mexican immigrants came to labor in American wartime industries. According to the Library of Congress, the country was developing its attitude and policies towards Chicanos during that era.

In light of recent events, it would appear that in some ways, the U.S. is still determining its reaction.

Nicholas Gonzalez, the voice actor for Ernesto, one of the main “Borderland” characters, articulated the situation that Chicanos are navigating in the 21st century:

“It’s something I deal with constantly: racism. Assumptions about me.” 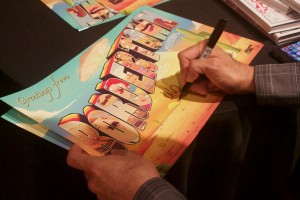 “I think art should be about important things,” he said.

It’s like the takeaway from Ernst Fischer, Austrian journalist: “In a decaying society, art, if it is truthful, must also reflect decay.”

But even decay-laden art can affect others in a positive light.

Lalo is emphatic when he states his purpose: to draw attention to the Chicano situation, but in a way that eases the audience.

“I hope that people would loosen up about ethnic humor,” he said. “That they’d engage in racial humor not just for the sake of it, but to have a point. So that it’s worth something.”

Gonzalez hopes that the audience would be exposed.

“When you laugh at something, it shows who you are. That’s why people bristle.”

“I know there are gaps in everybody’s context or thought. We need to bring some new perspective.”

For all these reasons, Lalo’s work fits in with the rich lineage of political cartoonists and social artists coming before him. Having snatched the baton from Gus Arriola, he is rounding the bend, running the race for freedom of speech, social awareness, and a hearty guffaw. 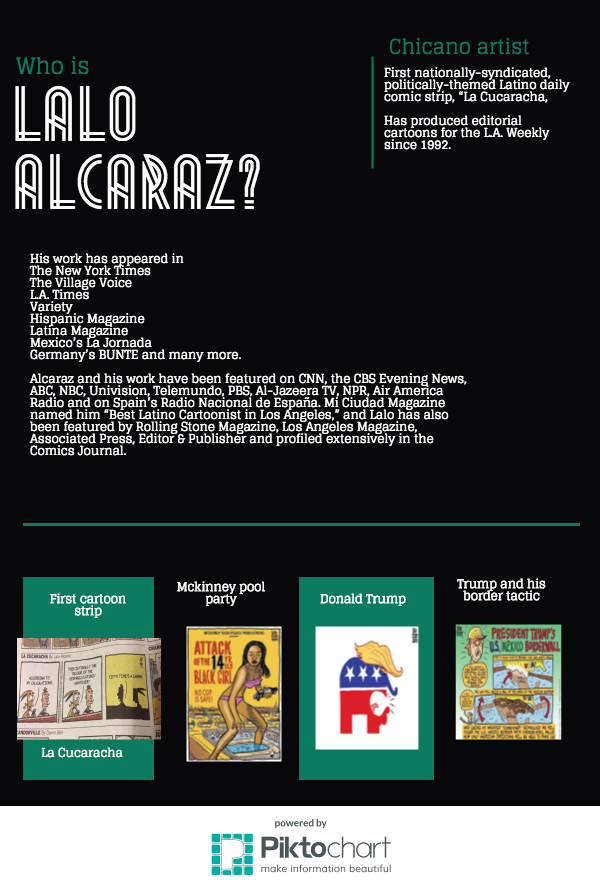 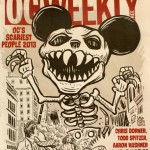 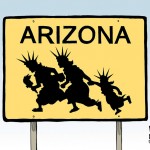 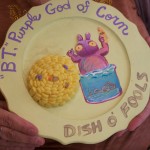 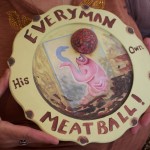 Everyman His Own Meatball! 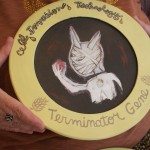 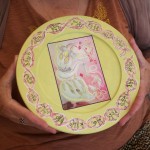 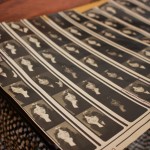 Bobbie Moore, shared this picture album of herself when she was a young college student. 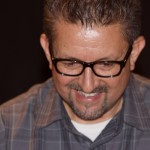 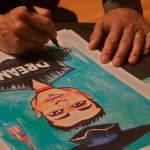 DREAM, so close, yet so far. This is an illustration that reflects many students in the U.S. According to the American Immigration Council, there are about 1.4 million immigrants that relate to the DREAM ACT. 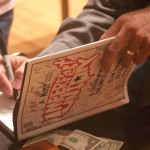 A Most Imperfect Union: A Contrarian History of the United States. Illustrated by Lalo Alcaraz. Lalo sold several of this comic books at the workshop for 15 dollars. 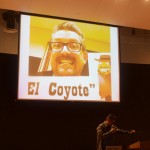 In Border Town, Lalo, does the voice of ‘El Coyote'; Mexican-spanish term referring to the practice of smuggling people across the US-Mexico border. 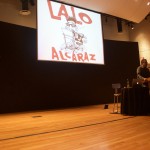 Lalo Alcaraz, chicano cartoon artist, introduces himself at the free teen workshop where he showed his political cartoons and a sneak peek of the new cartoon show, Border Town.