Masc, Femme, Both or Neither? Deconstruction of Gender

From the time we are born we are given two default choices—Male or female. But, what happens when a person does not identify with these preconceived categories?

Tyler Grant, a senior public health major at the University of Texas, is one such person. They identify as gender-neutral and has asked to be identified using their/them pronouns.

“As a culture, it would be great if we could get rid of ‘sirs’ or ‘ma’ams’  because those labels make assumptions about people’s genders,” Grant said. “Those habits are hard to unlearn.”

Gender is a nuanced subject that goes far beyond the “male” or “female” identities assigned at birth. There are many different gender identities, and the experiences that come with each vary just as much as the people behind them.

Transgender serves as an umbrella term, meaning it encompasses multiple identities such as gender neutral or genderqueer. Those who do not identify with the gender assigned to them at birth typically identify as Trans.

However, a common misconception is that transgender people only transition into male or female identities.

“I identify as genderqueer,” says Shane Whalley, a lecturer at UT’s School of Social Work. “There is a ‘F’ on my birth certificate, [but] I am not going to transition to male.  I live somewhere in the middle.”

The delicacies behind gender identification have led to challenges, misconceptions, and have left many non-binary people with the task of “explaining” something, that to them feels natural.

“The biggest misconception I face is that people think I either have to be a guy or girl. There’s no in-between for them,” says Brit’ne Sissom, a senior electrical engineering student at UT.  “Gender is not a binary. It’s not even a spectrum; it’s like a big tangled mess of stuff.”

Sissom says identifying as binary was never a choice. 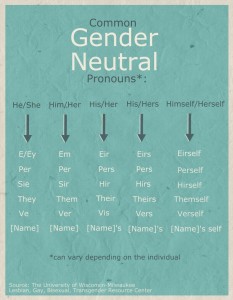 “The biggest misconception about the community is that we’re just doing it to be different. We just want attention and clearly, acting in a way that could get us killed is our choice and not something we really feel about ourselves.”

For Grant, an action as mundane as using a public restroom can be cause for concern.

“Every time I have to walk into a men’s bathroom on campus– particularly if I’m wearing makeup, I feel uncomfortable,” they said. “I don’t fear for my for my safety on campus, elsewhere I can’t say the same.”

Sissom says that having to use gendered restrooms “is a constant source of discomfort for them.” They acknowledge that actions like a change in restroom policy or knowledge about proper pronoun usage are steps in the right-direction, but also say that the Trans community as a whole faces a much larger issue of systematic violence that often goes ignored.

“I think the biggest challenge facing the trans community is the violence they face every day,” Sissom says. “People are still so transphobic and refuse to try to understand, and it literally kills people.”

Trans women of color, in particular, are much more likely to experience violence. A statistic that Grant says is troubling and underrepresented.

Whalley, who worked as the education coordinator for the Center for Gender and Sexuality from 2007 to 2014, says broader education and awareness among the general public is the key to helping the Transgender community overcome and eradicate many of the issues at hand.

“Ask and use my pronouns. Help me navigate bathrooms, having a friend can help with safety. Advocate for gender inclusive bathrooms,” Whalley said. “Work for non-discrimination policies and help educate others.”

Grant, Sissom and Whalley come from different backgrounds, and while they do not represent an entire group of people, each expressed a sentiment worth noting.

“We need society as a whole to be more accepting,” Grant said. “We need to stop putting people in boxes.”

A bit of makeup can do more than cover up, it can reveal so much. Tyler Grant showcases the steps of creating their  self-proclaimed “androgynous” style while sending a message that bends the rules of traditional gender expression. Grant hopes to educate others in being more accepting of the trans community. 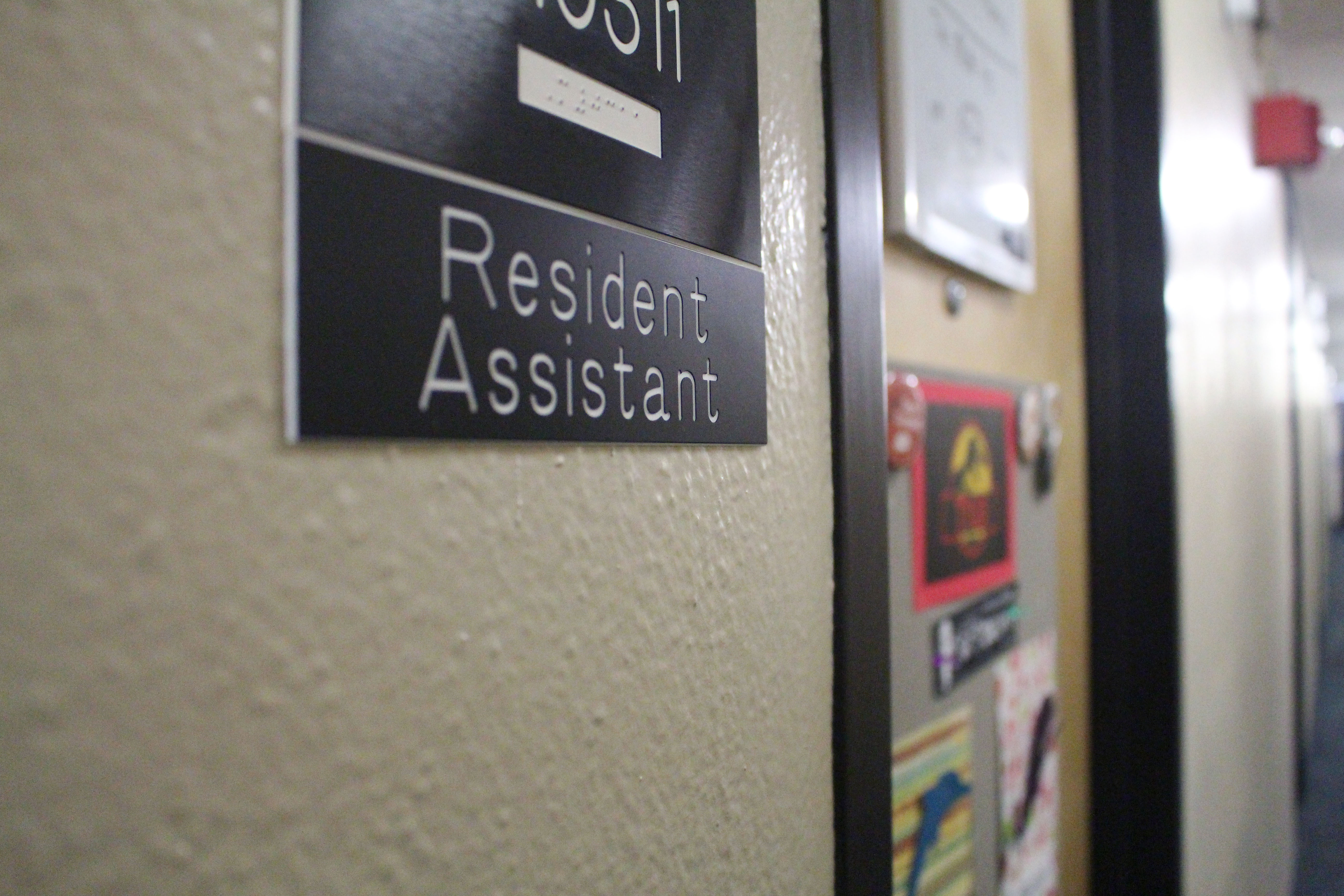 Resident Assistant Tyler Grant covers their door with inviting nametags and messages for their Jester East residents. Grant says they plan to host an event for students who are interested in learning about makeup and gender identity. 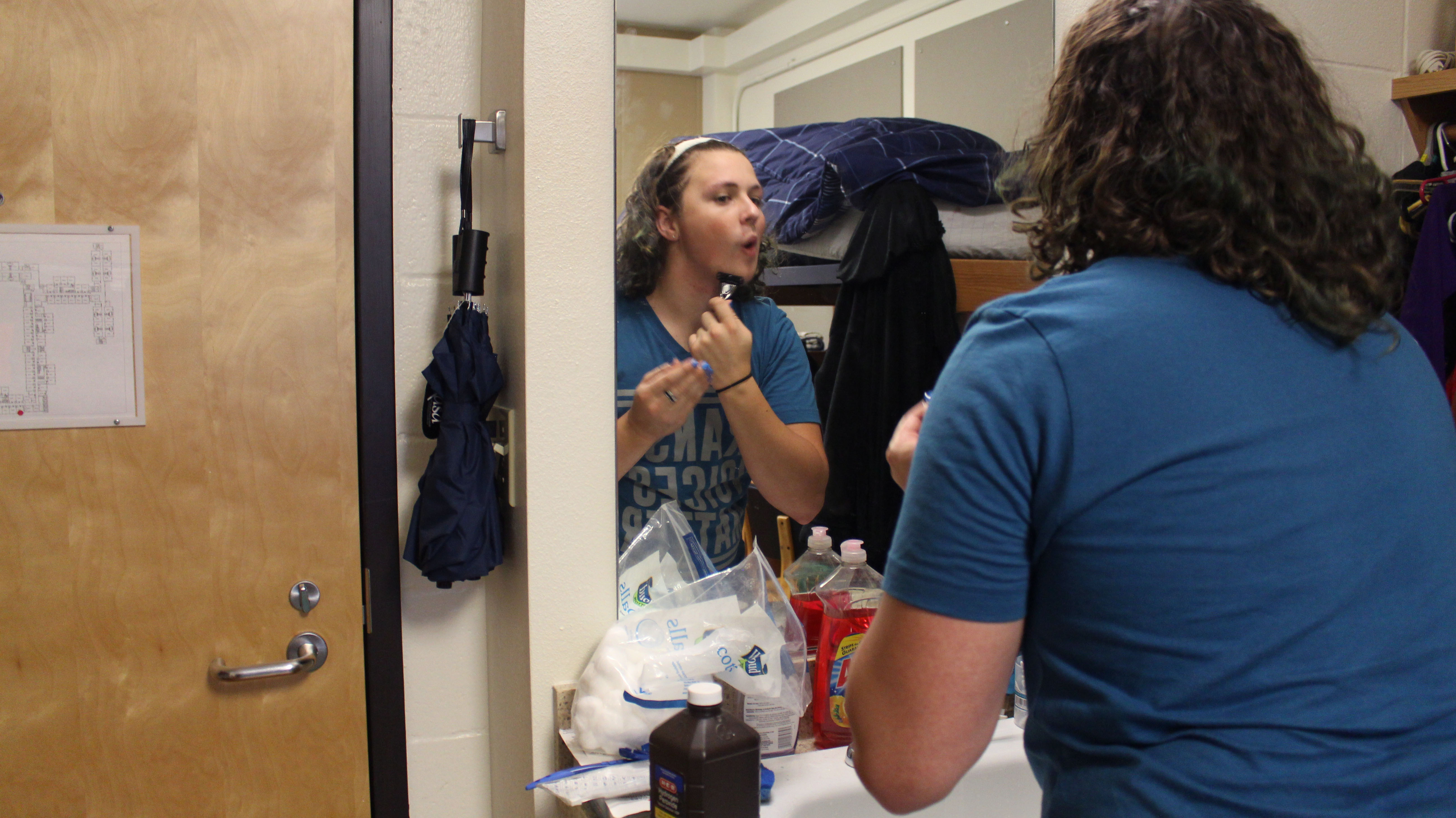 Grant shaves before applying their make up for the evening. Despite stares from passing eyes, Grant says they feel safe on campus. 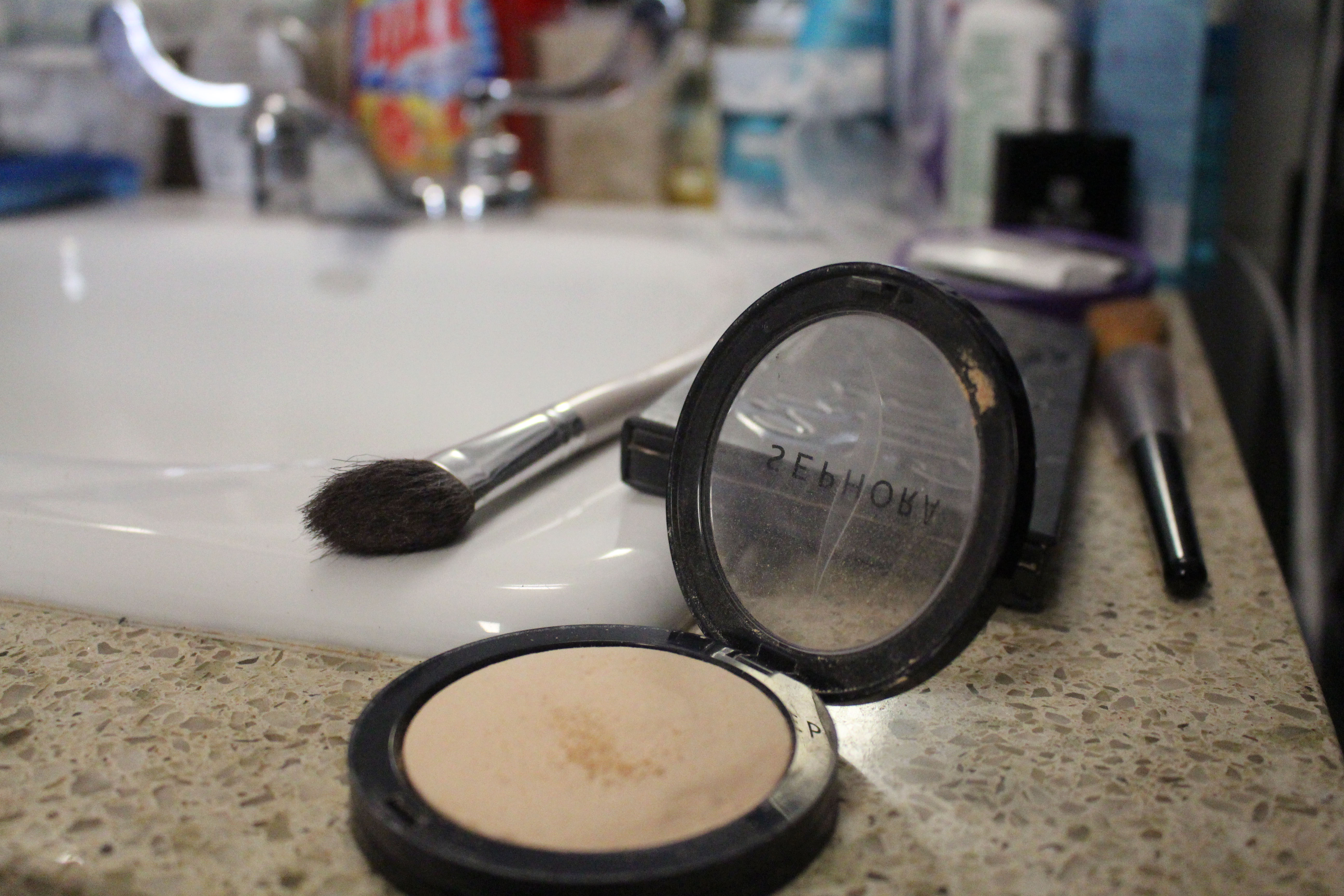 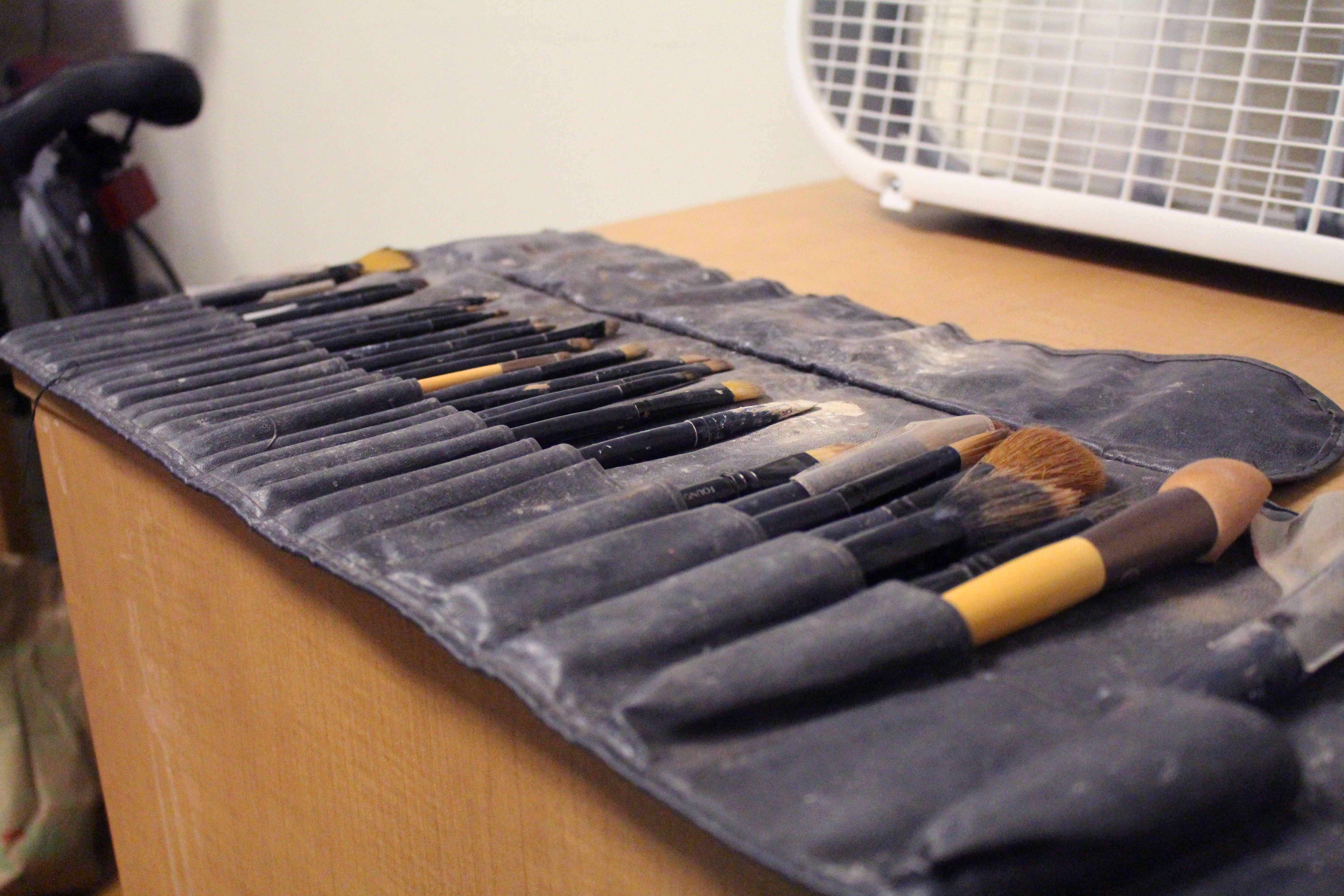 Grant sets out their collection of brushes to begin contouring, a task that could take up to 20 minutes alone. Contouring uses darker colors to emphasize the shadows of their facial structure. They estimate to have around 35 brushes. 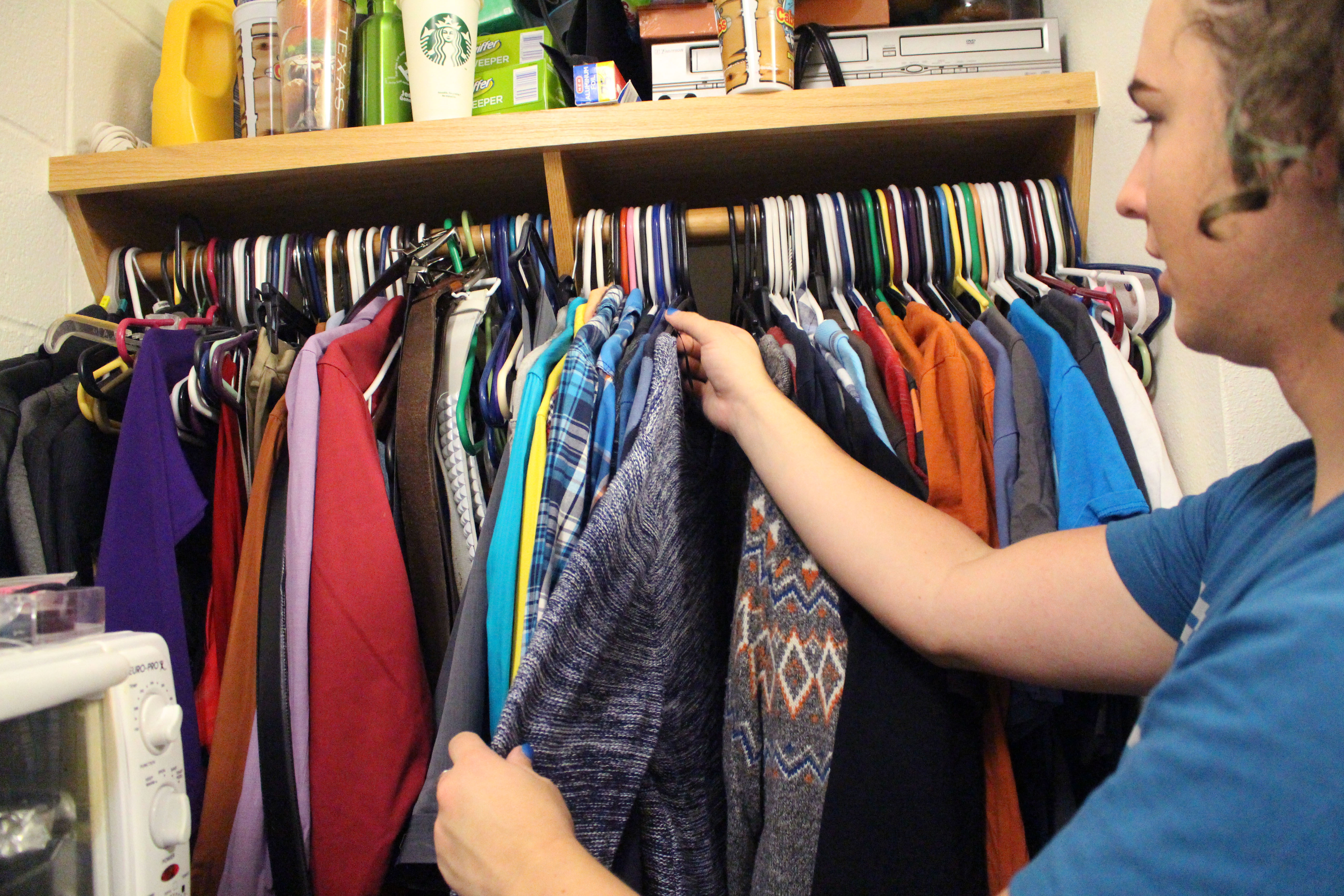 Grant showcases their collections of various outfits that include both traditionally masculine and feminine clothing styles. Grant says some of their favorite places to shop include H+M. Forever 21, and Buffalo Exchange. 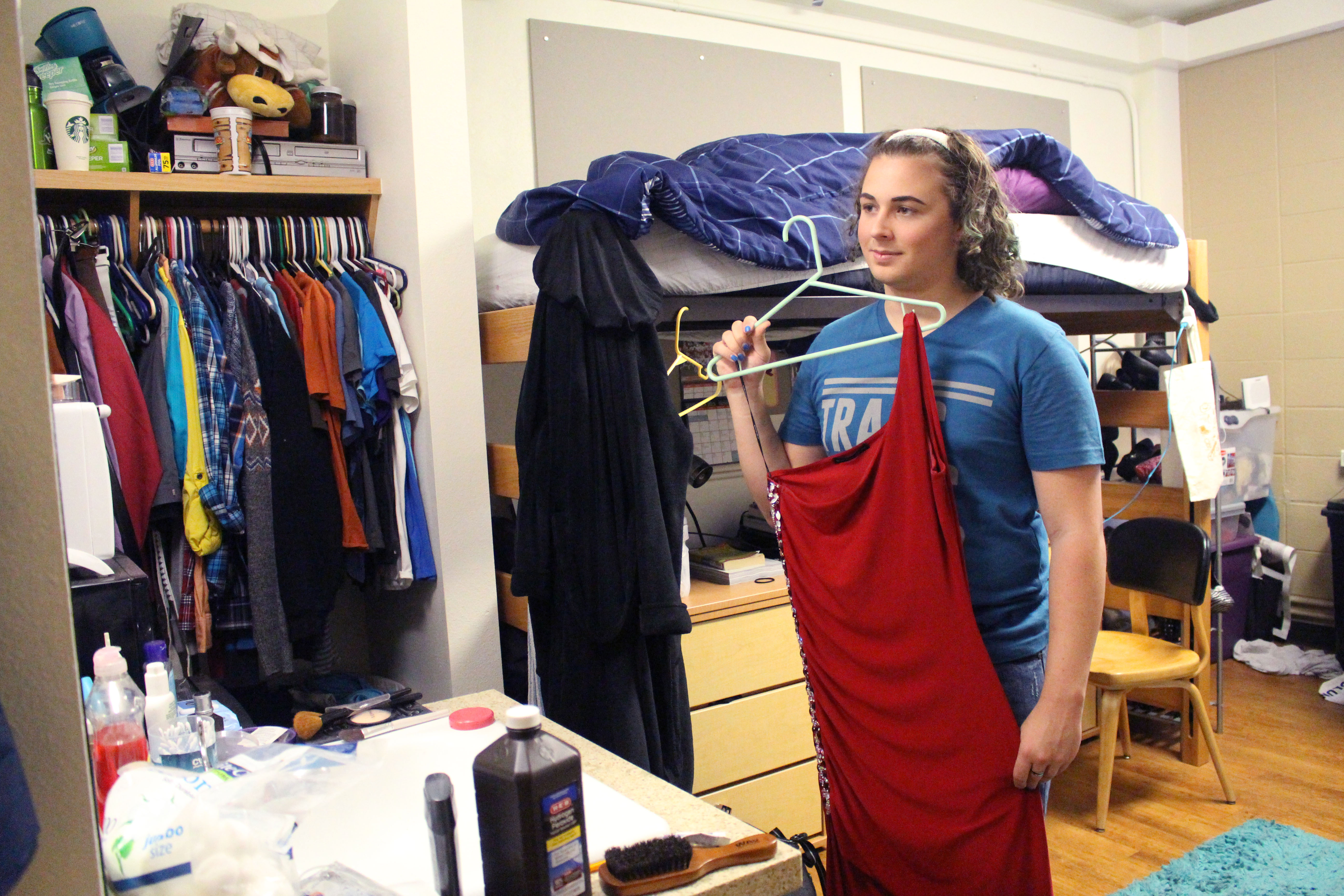 Grant shares one of their favorite dresses given as a gift. They plan to wear this dress during Halloween and dress as “Jessica Rabbit” from the 1988 film, “Who Framed Roger Rabbit”. 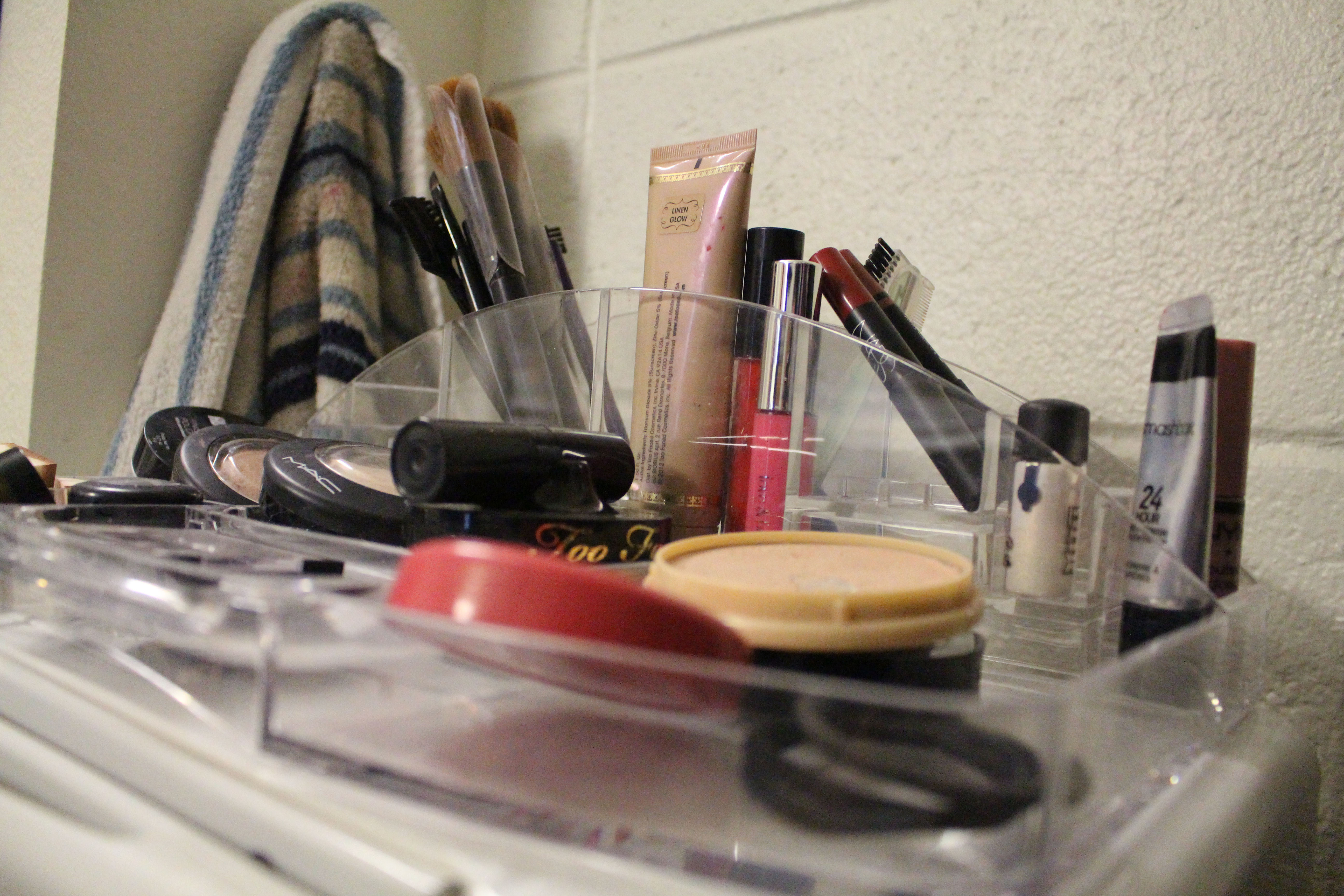 Grant’s make up collection includes various brands as inexpensive as Elf, and as Expensive as Mac. Grant says over the years, they estimate to have spent over $2000 on makeup. 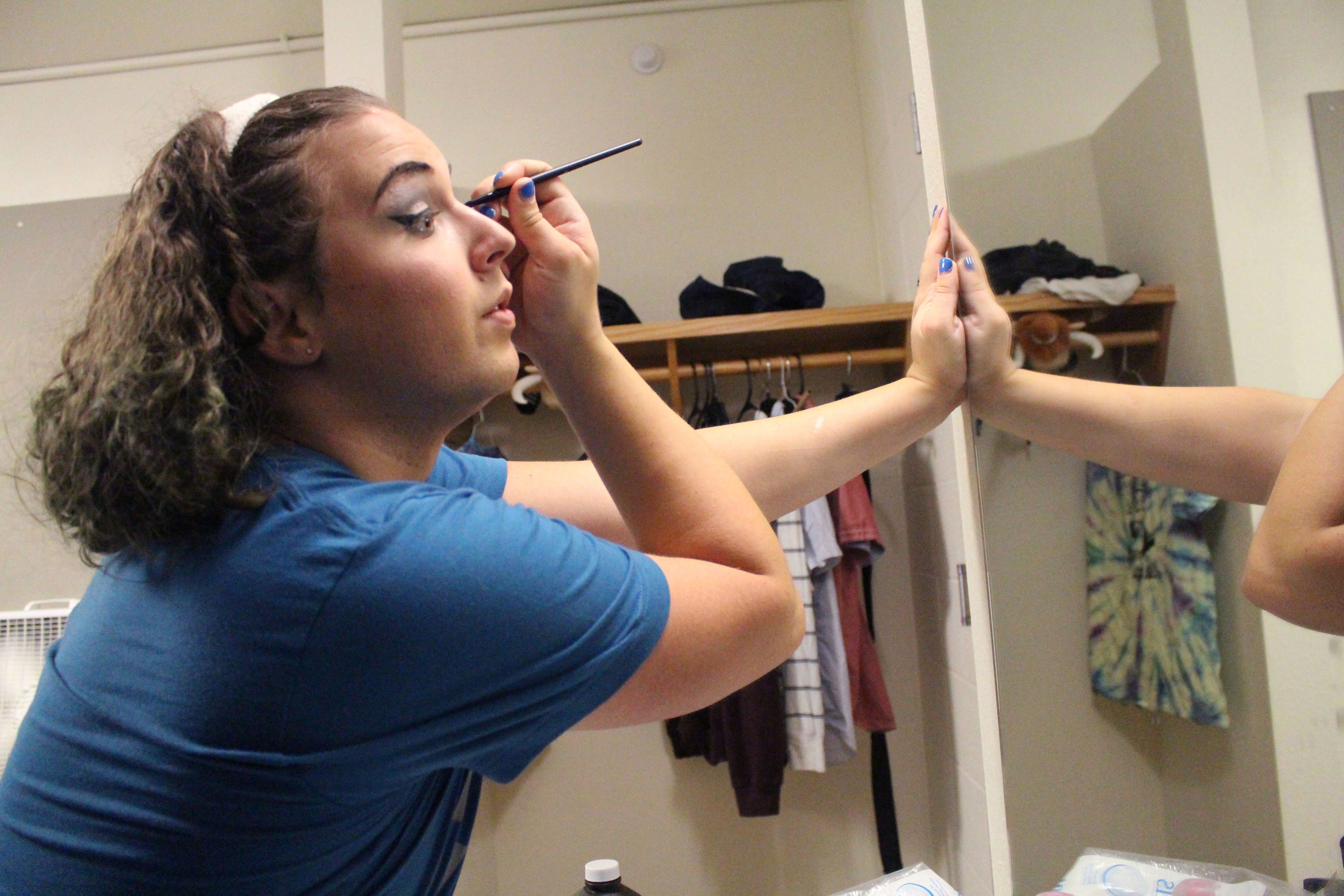 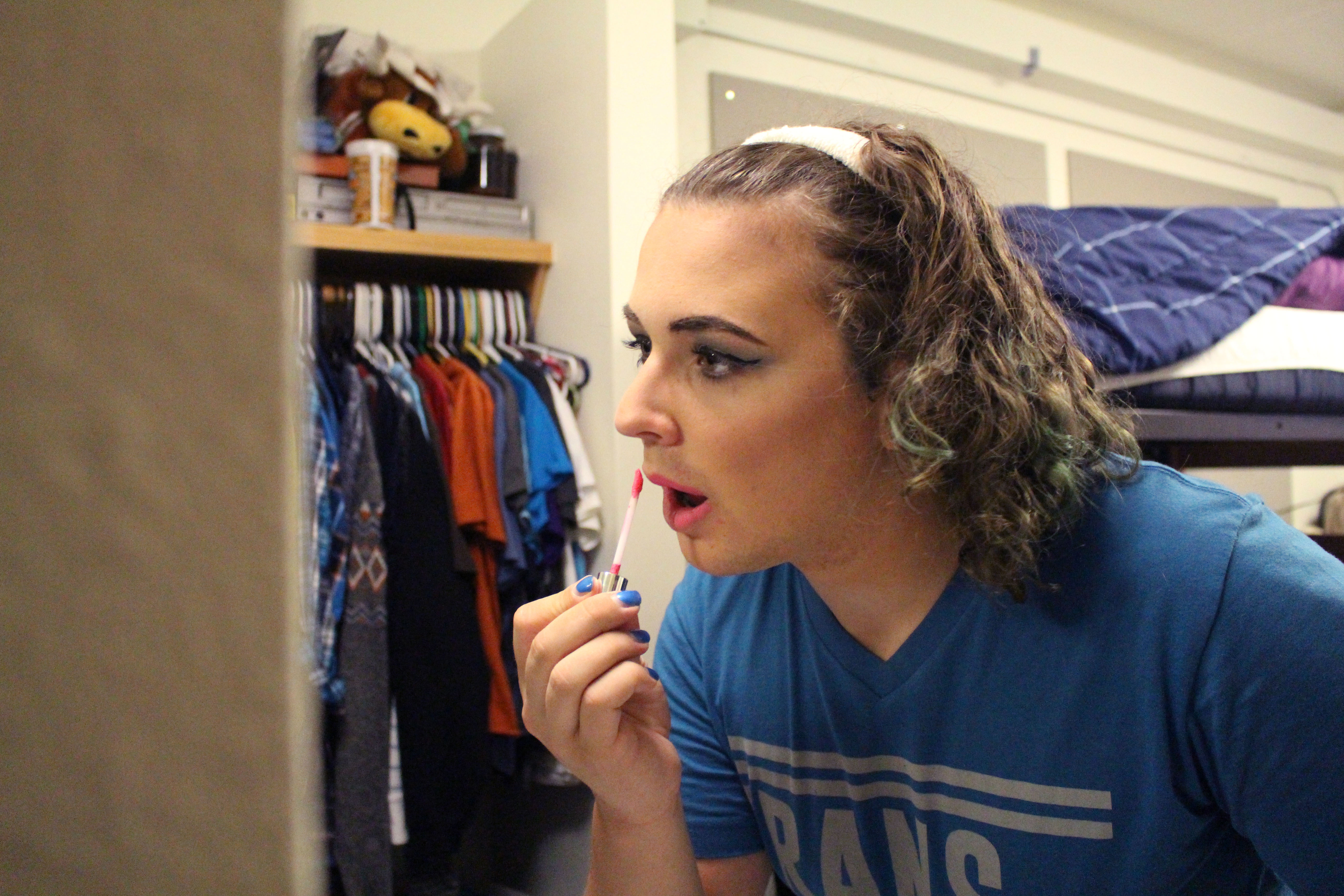 Grant applies on of their favorite lip-glosses purchased from Forever 21. Grant estimates to have about 15 different shades of lip color. 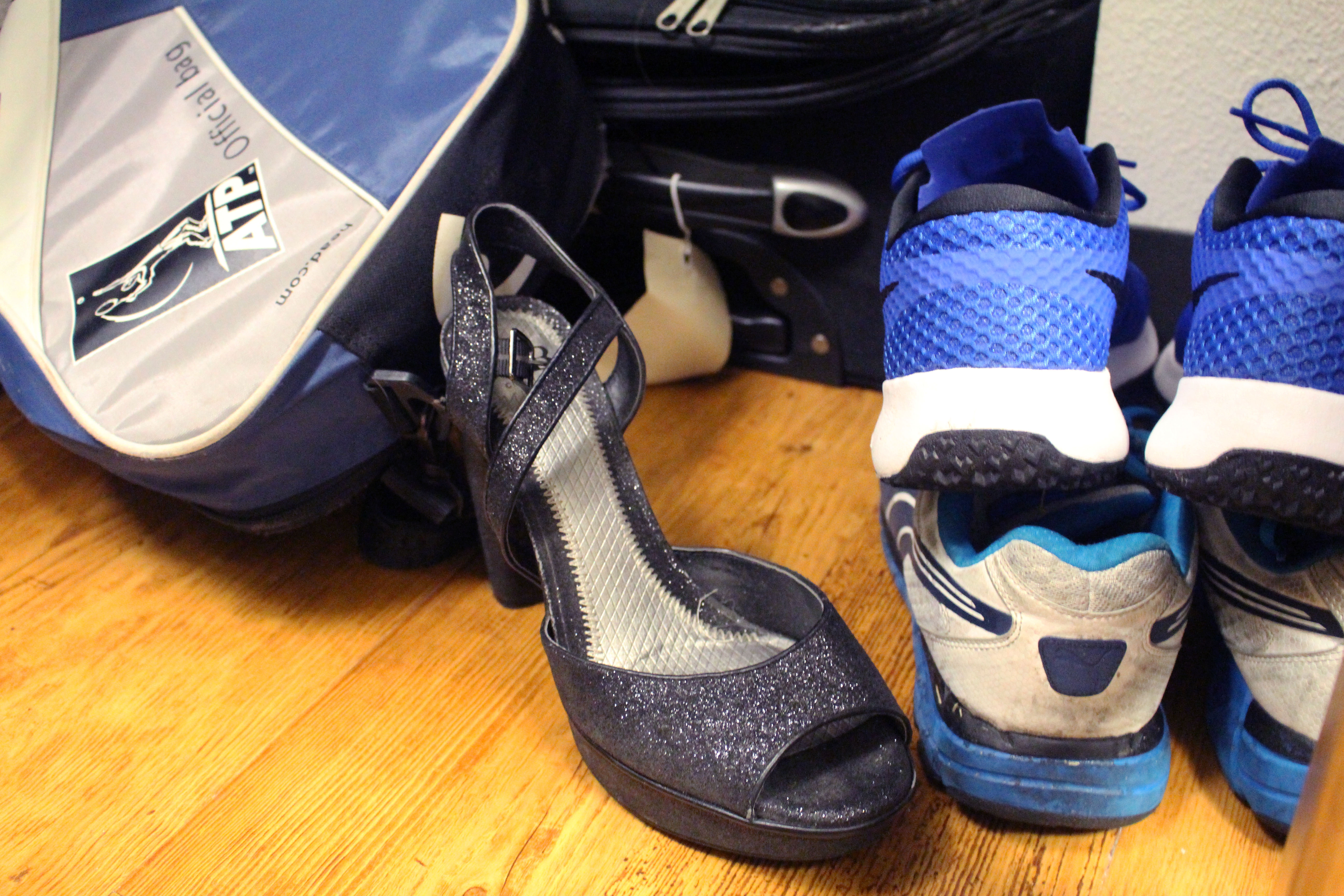 Grant’s shoes stand side by side—a couple of pairs for everyday walking, and one lone shoe reflecting their hobby, drag performance. Grant’s size 10 black glitter shoes are just one of the many shoes Grant wears to dance and sing at local bars.

← Congestion Problem Leads to Headaches
Anybody Can #BeSomebody, But Will They Make Money? →