Sustainable Food Center and the Future

Celebrating Life and Remembering the Dead

Oct. 29 Arts and Culture Comments Off

Día de los Muertos is becoming a larger occasion in the capital of Texas. The third year annual festival was held in Austin on October 17, though the holiday is on November 1 and 2.

Día de los Muertos, or Day of the Dead, started out as an Aztec ritual that began almost 3000 years ago. Today, the Mexican community uses altars, candles, and food to commemorate the loss of loved ones.

“It’s about loved ones and their memories and keeping it alive and celebrating their life as well – not just their death, but their life,” said Sabrina Garcia, festival participant.

Jennifer Perez, one of the participants at the festival, made an altar in honor of her father who died last year.

“What better way to keep a loved one’s memory alive than to have an altar dedicated to him and the people that we love,” said Perez. “It just brings the family together and makes sure that person is not going to be forgotten.” 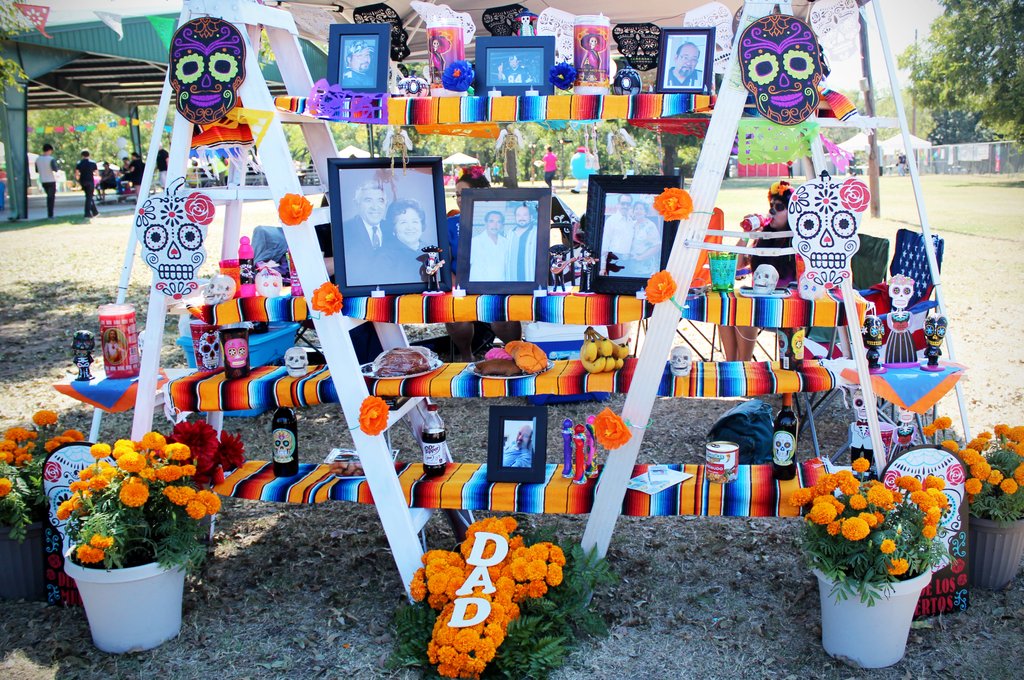 Altars are traditionally placed at grace sites to provide food and treats to the deceased. They are also found in the home, at church, or at local restaurants. Altars can honor one or many people.

While death is often seen as a negative concept in our society, the point of the holiday is not to mourn the dad, but rather to celebrate their lives.

“It’s very important to not think of death as a bad thing and to where you can bring out colorful things instead of dressing in all in black,” said Jeanette Docasar, participant at the festival. “You can actually be colorful, beautiful, remember people, dance, and celebrate.”

Although Día de los Muertos is most often associated with Mexican culture, it is a holiday that can unite people of all different backgrounds.

“Nowadays it brings together many cultures. It’s celebrated everywhere in the world,” said Docasar, who celebrates with Spanish relatives. “It’s always been such a beautiful thing for us.” 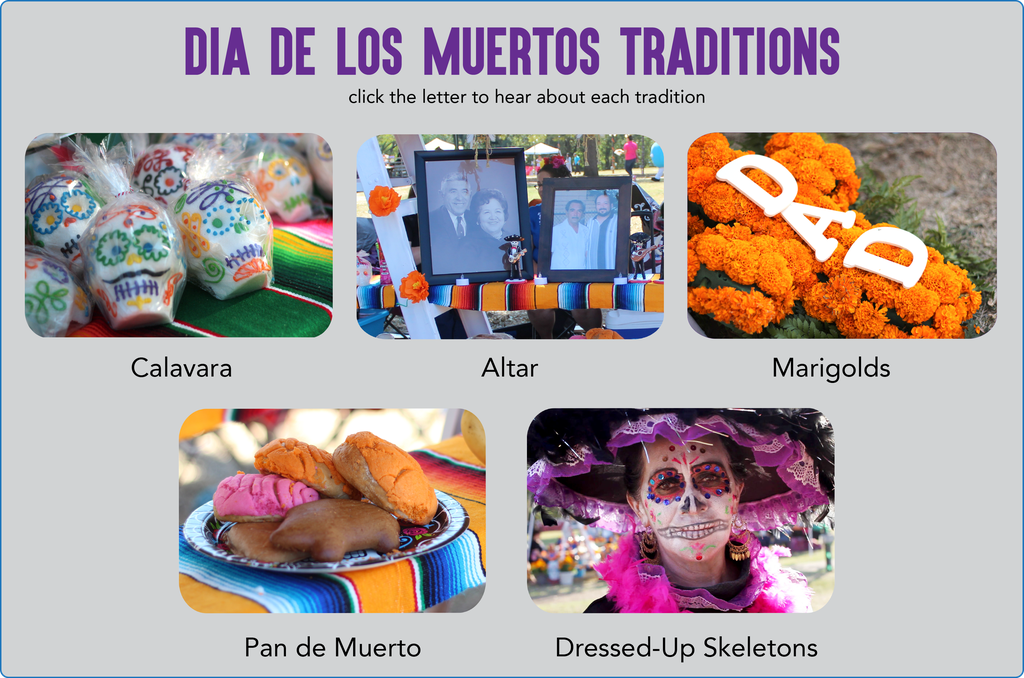 The idea of construction disrupting the daily flow of life is nothing new to the residents of west campus. Large drills breaking through concrete at 6 a.m. can be heard two blocks over. Detour signs found on two-way streets effectively change them into one-way streets forcing buses and cars to alter their routes.

The drive to build newer and larger apartment buildings has created a problem for students and drivers in the college neighborhood.

Sneha Patel, a resident at Chelsea Condos, an apartment complex next to a hub of construction, said that she doesn’t use the west campus bus system to get to school.

“In theory, riding the bus would be a faster way to get to class,” Patel said, “But now with all the detours, I actually get there later than I would if I just walked.”

The average time to walk from Chelsea Condos to her class on Dean Keaton St. is 10 minutes. It takes about 25 minutes by bus. 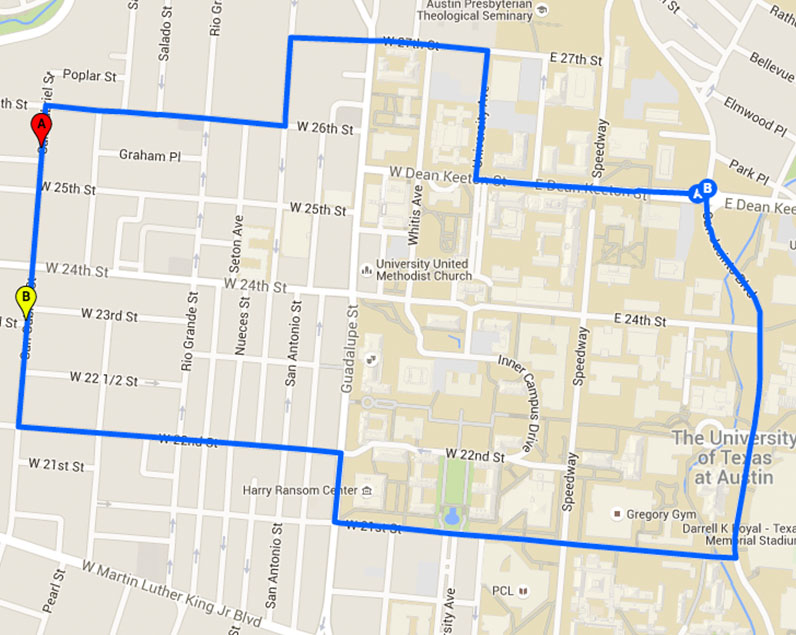 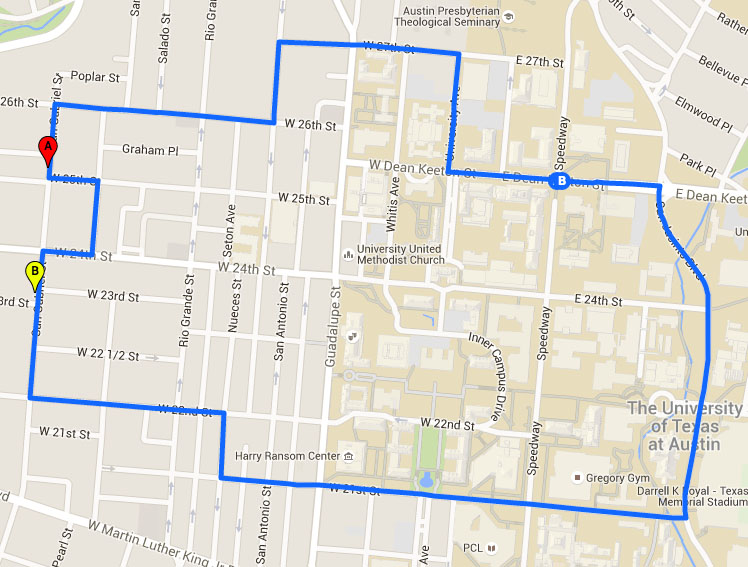 Juan Gonzales, a construction worker for JeDunn Construction, said that the small space in which he’s expected to work in has been a challenge.

“Trying to move a large cement truck into the construction area is difficult because there are many cars and people also on the streets,” Gonzales said, “People only care about themselves.”

Nastassja Hutchinson, a west campus bus driver, said the changing of the bus routes has extended the time it takes to drive to campus.

“Turning onto 24th St. is particularly difficult because there are no lights,” she said, “I have to wait until there are no cars and pedestrians in order to turn and that might take a while.”

This was the first time Hutchinson experienced a change in the bus route, and she said some students have not been happy about the increased route times.

“Sometimes students get mad at me for not getting them to class on time,” she said, “But at the end of the day, there’s not much I can do about it.”

Construction that impedes the usual west campus bus route is not expected to finish until next July.

By: Will Bruner, Nicole Rusli, and Shelby Hodges

For 30 years, Keep Austin Beautiful (KAB) has been a resource for local organizations and communities to engage the public about the environment. In commemoration and celebration of their 30th Anniversary, KAB is hosting 30 projects in 30 days during the month of October. These projects will include events of environmental education for youth, beautification of different natural locations in Austin, litter pick-up and gardening sustainable food.

Ashley De Jong leads the Volunteer Board of Directors for KAB. Her job is to oversee the strategic direction of KAB and ensure the organization is accountable by using funds wisely.

“I know we have completed over 50 projects already! We wanted to celebrate our 30 years by engaging the community, that’s what we have always done. Our partners are always surprised how easy we make it to get a few people together and dramatically change the environment,” said De Jong.

The Concho Community Garden is one of the many projects represented over the course of 30 days. Lily Nguyen, Director of the garden and volunteer coordinator for Keep Austin Beautiful, believes that sustainable agriculture is important to improving the environment in Austin.

“Conventional agriculture, it impacts pretty much every single part of our natural environment in a bad way…through the use of pesticides, synthetic fertilizers that cause eutrophication in the oceans,and it has less nutrients. It is not as conscious or sustainable as organic produce, which is returning as much as you take from the earth. It’s giving it life, it’s giving it nutrients and doing it with a respect for the environment that conventional agriculture never thinks about,”said Nguyen.

On Nov. 18, Keep Austin Beautiful will end their 30 year Anniversary by awarding businesses and organizations for their activism at an event called the Beautiful Bash. De jong will be one of the hosts for the event.

“Keep Austin Beautiful has been the resource people come to when they want to do something good for the community. We will always be that resource, but we’ll also be more pro-active initiating projects and engaging the public about what our city needs and where. We’ll do whatever we need to do to make Austin the most beautiful city in the world,” said De Jong.

The Hashtag #mybeautifulatx was used to promote the 30 projects in 30 days initiative.

On Thursday afternoon, as classes let out and students made their way through campus, chants of “UT Gun Free” echoed through the West Mall.

More than a 100 students, faculty and parents had gathered in protest against the Texas Senate’s approval of campus carry, which will allow licensed holders to have a concealed weapon on campus. Originally organized by Gun –Free UT as a solely anti-campus carry protest, the rally featured appearances from all sides of the issue.

The bill, which passed in May, will make Texas the eighth state to allow people to carry a concealed handgun on campus and in buildings. The legislation is scheduled to go into effect on Aug. 1, 2016 which also marks the 50th anniversary of the UT tower sniper shooting.

The new legislation has been a controversial subject of discussion among many members of the UT community. Thursday’s rally was just one of many protests, forums and debates.

In an interview with CNN, UT Chancellor Bill McRaven said he can’t change the law now, but plans to implement it the best he can. He said some parts of campus will remain gun-free but that won’t prevent staff from being on edge.

“I like guns but I just don’t think having them on campus is the right place,” McRaven said. “Now, are the faculty going to be concerned about raising controversial issues for fear of somehow alienating or making mad someone with a weapon?”

Gun-Free UT, founded by radio-television-film professor Ellen Spiro, is an organization of more than 300 faculty members who oppose concealed campus carry. In early October, economics professor emeritus announced he will withdraw from his position at UT come next fall.

According to UT, officials estimate fewer than one percent of students have licenses to carry. Although there is no way to determine exactly how many students have concealed handgun licenses, the estimation is made based off of other UT demographic data.

Spiro said this law the supposed one percent would come out to about 500 students on campus with weapons. She said professors who are teaching lecture classes of 450 students don’t know if they’re going to have somebody come to campus from the other states because Texas has reciprocity laws.

“Anyone with a concealed weapon can be on campus from any state,” Spiro said. “It’s scary. There’s a lot of fear. We’re all afraid but those of us who are speaking out are doing it in spite of the fear.”

French and Italian assistant professor Paula Bonifazio, who is part of Gun-Free UT, said she was against SB-11 before its approval and now wants her voice heard.

“I’m afraid of guns so I don’t want them in my classroom,” Bonifazio said. “It’s clear it’s not just a faculty movement, its not just something of a niche — it has a very wide response from staff from students.”

Government sophomore Allison Peregory, chairman of the Young Conservatives of Texas, created Texas Students for Concealed Carry on Campus. She said in an interview with CNN concealed carry on UT campus is not a radical new concept — for the past 20 years, UT has allowed concealed handguns on school grounds just not inside buildings.

“I don’t think UT will suddenly become the ‘Wild West’ with open carry and guns flying,” Peregory said. “Knowing that you can make that decision [to carry a weapon] and you can make that for your own personal liberty and self defense is an empowering decision.”

Nursing senior Malcolm Mundy, who is pro-campus carry, said it’s important to be well-armed and ready in a precarious situation.

“Essentially, if you have a well-armed population, nothing will take on a bad guy better than a good gun,” Mundy said.

Anthropology senior Colin Healy said people need to listen to both sides of the story. Although he leans toward anti-campus carry sentiments, he said campus’ success in dealing with the new legislation depends on the population’s ability to listen more to each other.

“Just do your own research,” Healy said. “Don’t just believe what everyone is telling you. We have this idea that we need to have guns because the constitution said so. Well, the constitution was also used to disenfranchise people and oppress people for years so it’s not a perfect document.”