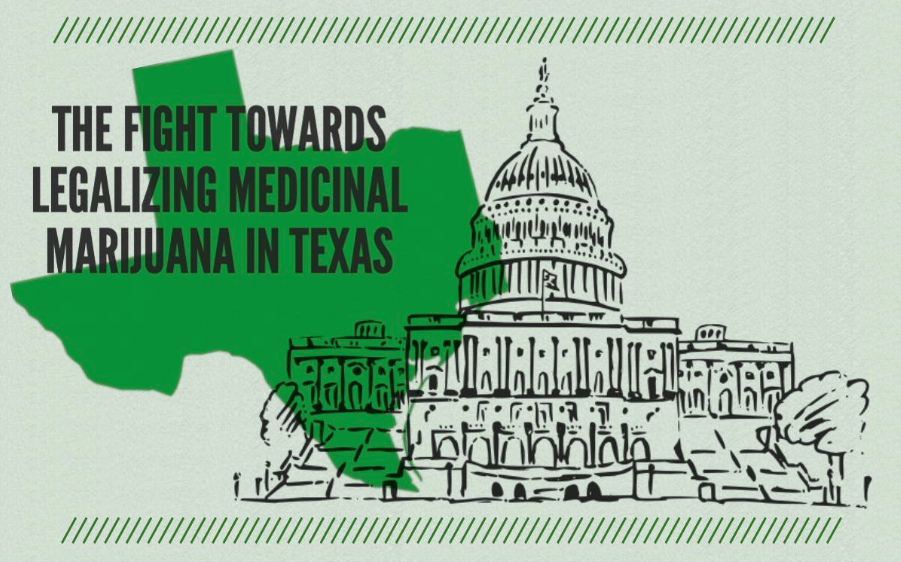 Texas may not join the states that have legalized recreational marijuana anytime soon, but medicinal marijuana reform will continue to be a discussion among legislators and advocates this next legislative session.

Texas voter views have changed dramatically in the last several years regarding marijuana use and decriminalization. A statewide poll by Texas Lyceum found that 46 percent of adults support legalizing marijuana completely. 28.5 percent of those who oppose legalization stated they would be in favor of decriminalizing it instead. Only 20 percent of Texans oppose reform in every way.

“Polling shows over and over again that Texans are ready for reform,” says Heather Fazio, a spokesperson for Texans for Responsible Marijuana Policy. “This isn’t a taboo issue anymore, it’s a very serious public policy issue.” 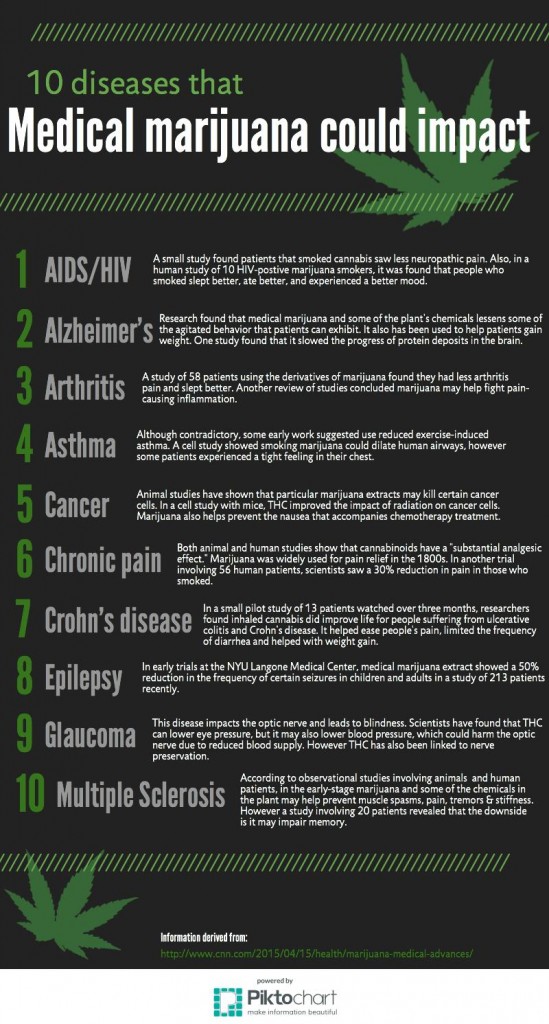 Texas legislators will not convene for the 85th session until January 2017 but many advocates of marijuana reform say the critical planning has already begun.

“Because Texas only meets to change laws every two years, if we do not act decisively in the 2017 session, we will be significantly behind the rest of the nation,” says Jax Finkel, Executive Director for Texas NORML, an organization that works to legalize the responsible use of marijuana by adults. “Our legislators need to come to terms with the fact that this is the change that Texans want.”

The 84th Legislative Session had roughly ten marijuana-related bills proposed but only one managed to pass.

“The fact that there were that many bills is really encouraging,” says Fazio. “It demonstrates there is an agreement that laws need to be changed.”

All of the marijuana-related bills passed out of the house, and several were able to pass out of committee but due to the time constraints of the legislative system, they died when the session ended.

“For HB 507, the Civil Penalties bill and HB 557, the Research Hemp bill, the clock ran out,” says Finkel. “For HB 3785, the Whole Plant Medical bill, the Chairwoman of the Committee would not let a vote be held on the bill, therefore killing it.”

The majority of these weed bills may have burned this session but supporters aren’t letting them cash out for good.

“We had authors come on board after the hearings last sessions,” says Fazio. “Next session, we would like to see fewer bills but with more people standing behind each of them.”

As for the bill that did pass, SB 339, otherwise known as The Compassionate Use Act was signed by Gov. Greg Abbott in June therefore legalizing the limited use of marijuana extracts to treat severe forms of epilepsy.

Texas now stands among the list of 23 states who have legalized medicinal marijuana but before Texans start fearing reefer madness to strike again, they should know the strict regulations of this new law.

The act makes it nearly impossible for those needing the treatment to qualify, or find doctors willing to write the prescription since it exposes them to federal criminal sanctions. Doctors would potentially be opening themselves up to committing a felony since prescribing a schedule one drug is still illegal. Doctors in other states that have legalized medicinal use the method of “recommending” or “certifying” the drug instead.

“The primary tenets that need to be changed for this law to work are expanding the qualifying conditions, expanding the number of strains allowed and altering the legal language to allow doctors to certify patients instead of prescribing,” says Fazio.

To qualify, a patient must have intractable epilepsy and can only access “low-THC cannabis” or that containing less than .05 percent THC.

A patient can only obtain the medicine from a licensed dispensary and to no surprise, none currently exist in Texas. The Department of Public Safety is required to license at least three dispensaries by September 2017.

There are thousands of different strains of marijuana plants and the current law prohibits using the psychoactive element of the plant.

But Fazio argues “that part is very important, that’s what helps the patient from suffering from the condition. Lawmakers want to keep it out because they think patients will get high.”

Currently, the Texas law limits the use to those whom suffer from severe epilepsy but studies have shown there are countless other illnesses and diseases that could also be helped.

“We all know someone who has been affected by a debilitating condition,” says Fazio “And if there is a natural medicine choice instead, more Texans would be willing to get the government out of the doctors office.”

Texas NORML wants to see more cannabinoids available for therapeutic use for patients. They also aim to pass another bill that will offer a more comprehensive whole plant program.

Finkel says she expects to see “an expansion of the Compassionate Use Program in 2017 and that we will likely see a civil penalties bill pass. I think that Texas is more likely to have a full retail market implemented in 2019.”

The first set of rule reforms for the Compassionate Use Act are expected to be released mid-November of this month.

In Texas, many electoral decisions are made during the primary elections which are coming up in March 2016.

“Our districts often know what political party will win in advance because of the gerrymandering of district lines. This means that the most competitive and active races are actually at the primary level,” says Finkel. “Since Texas is limited in how we can change laws, it is very important that we make sure that our state representatives and state senators are educated and compassionate when it comes to this issue.”

Advocates from Texas NORML say that the election period is a great time to talk to candidates about their stances and keep the conversations going.

While most candidates publicly announce their stance on issues like education and border security, many avoid sharing their opinions about the controversial drug. Representatives seeking re-election may not be able to stay neutral about the topic anymore. 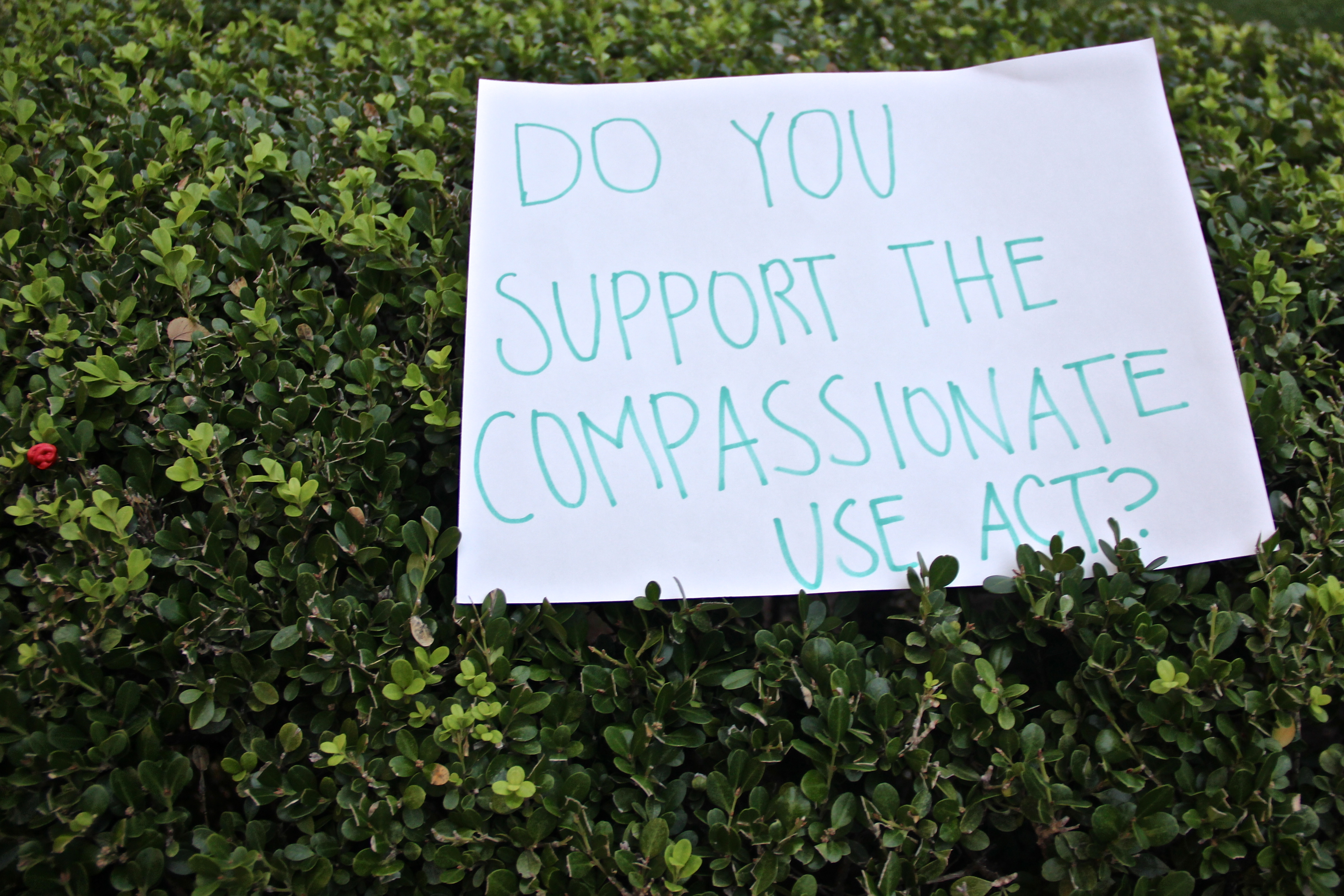 We took a survey around campus asking if University of Texas students supported the legalization of medicinal marijuana. The students had the choice of either supporting total legalization, just medicinal legalization, or to not support legalization. After getting their opinion, we asked them to explain their position on the matter. 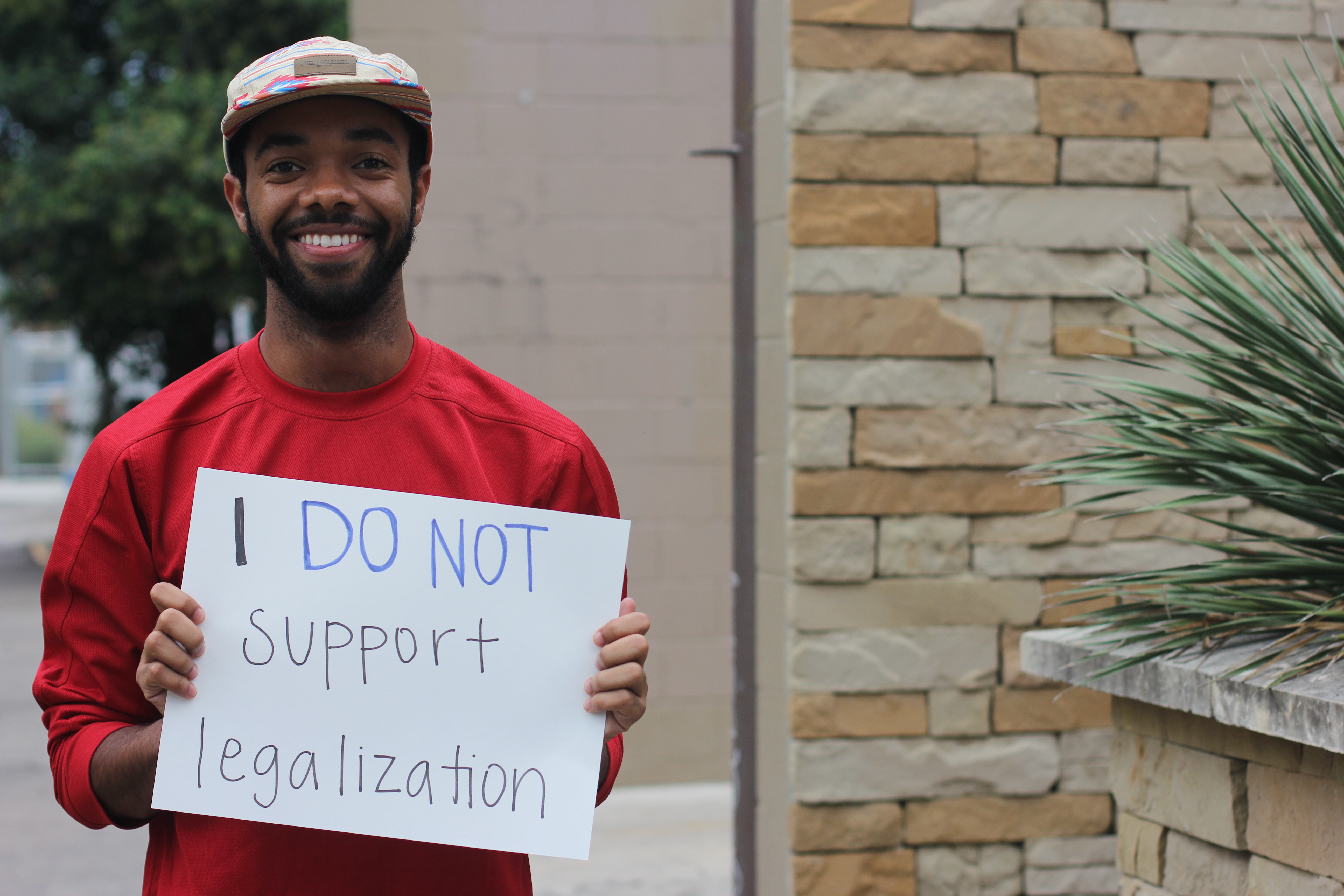 "I do not support the legalization of medicinal or any marijuana because I don't really have a stance on it. If it was legal it wouldn't change anything for me," said Johnny Chatman 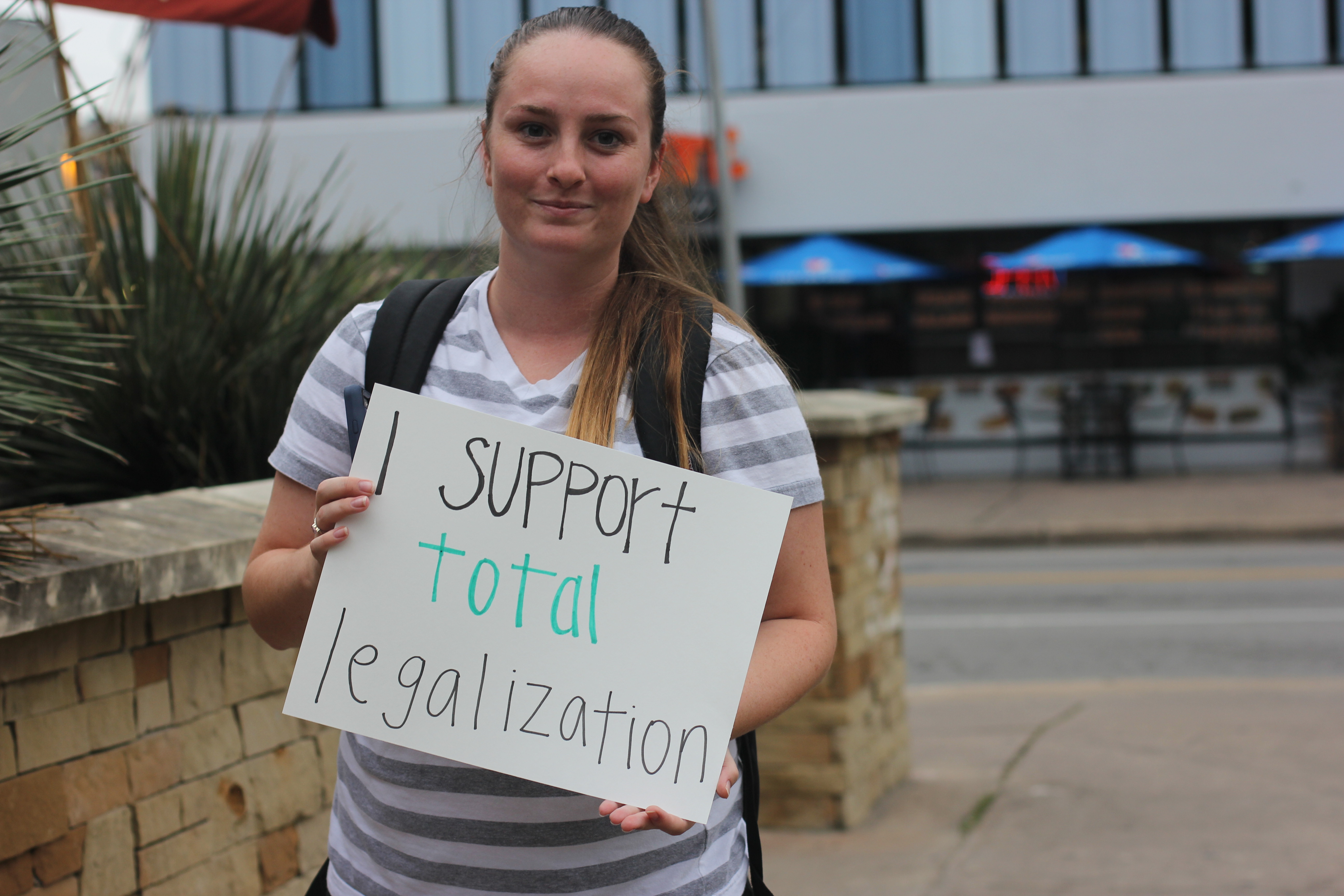 "I fully support legalization because why not? If it's going to be legal it's going to have to be completely legal," said Natalie Smith 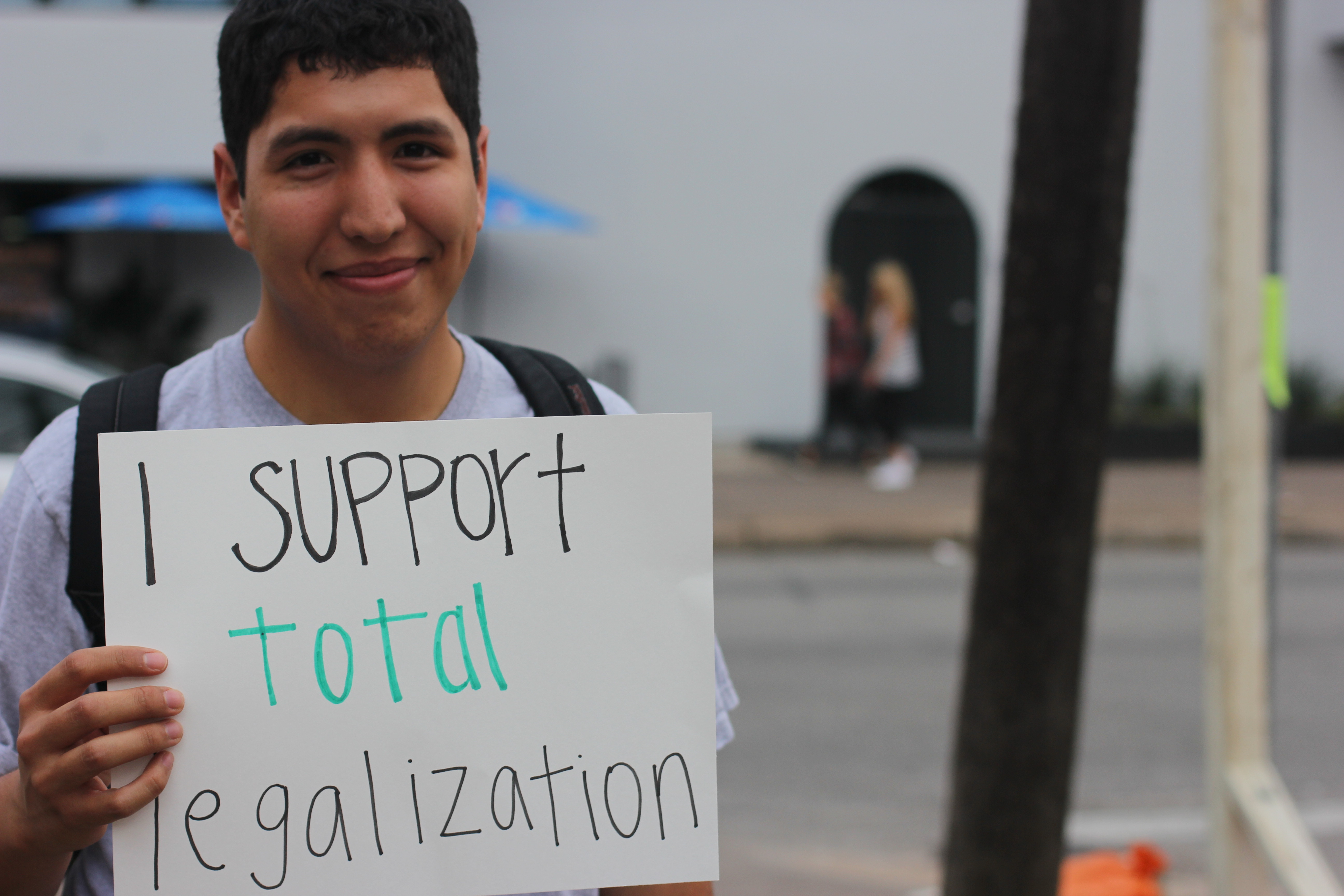 "I support total legalization because sure, I just don't see why not," said Robert Cortez 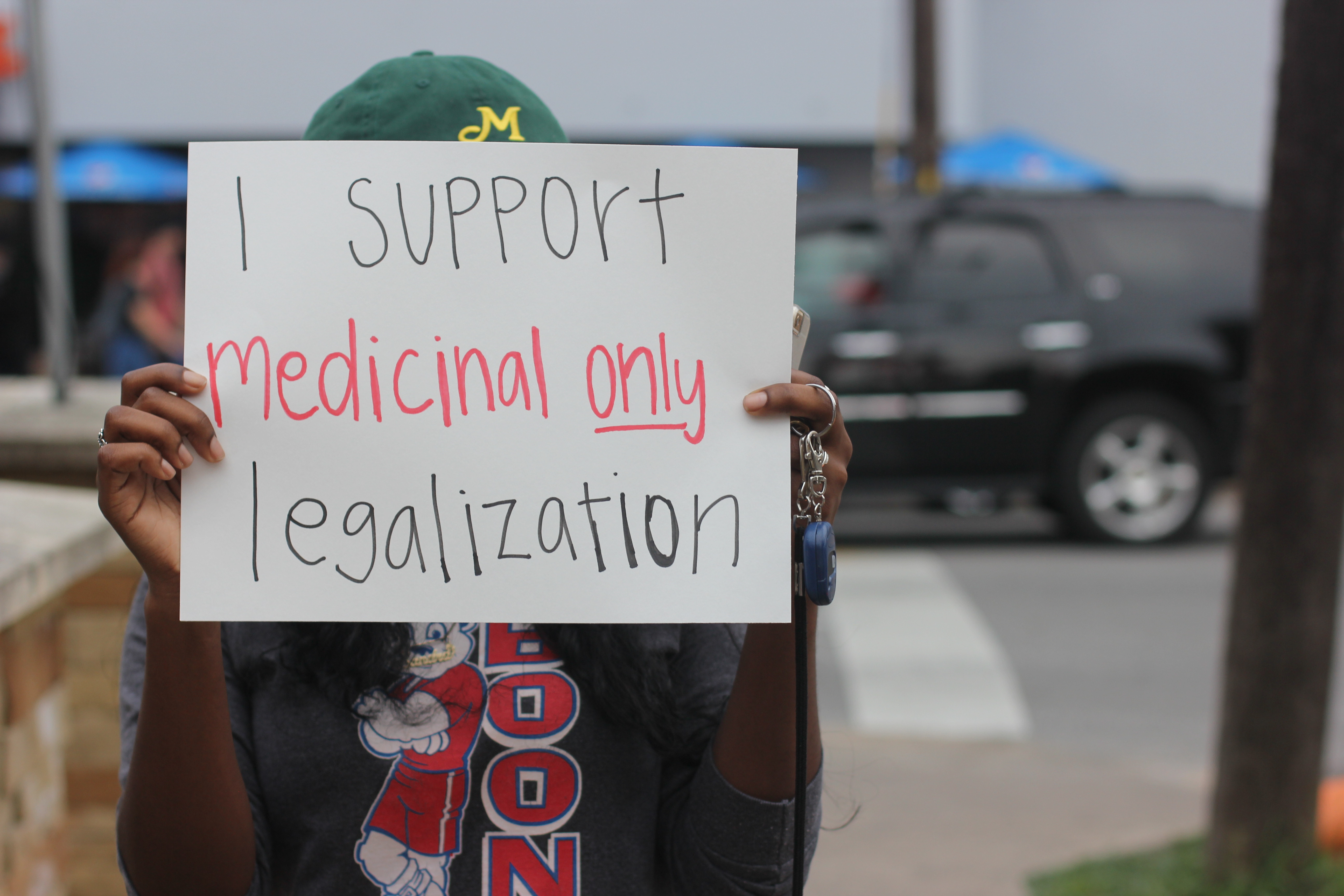 "Sure I support the legalization of medicinal marijuana only, but I don't want to be seen saying that I do," said Sandra Mere who wanted her face to remain out of the photo. 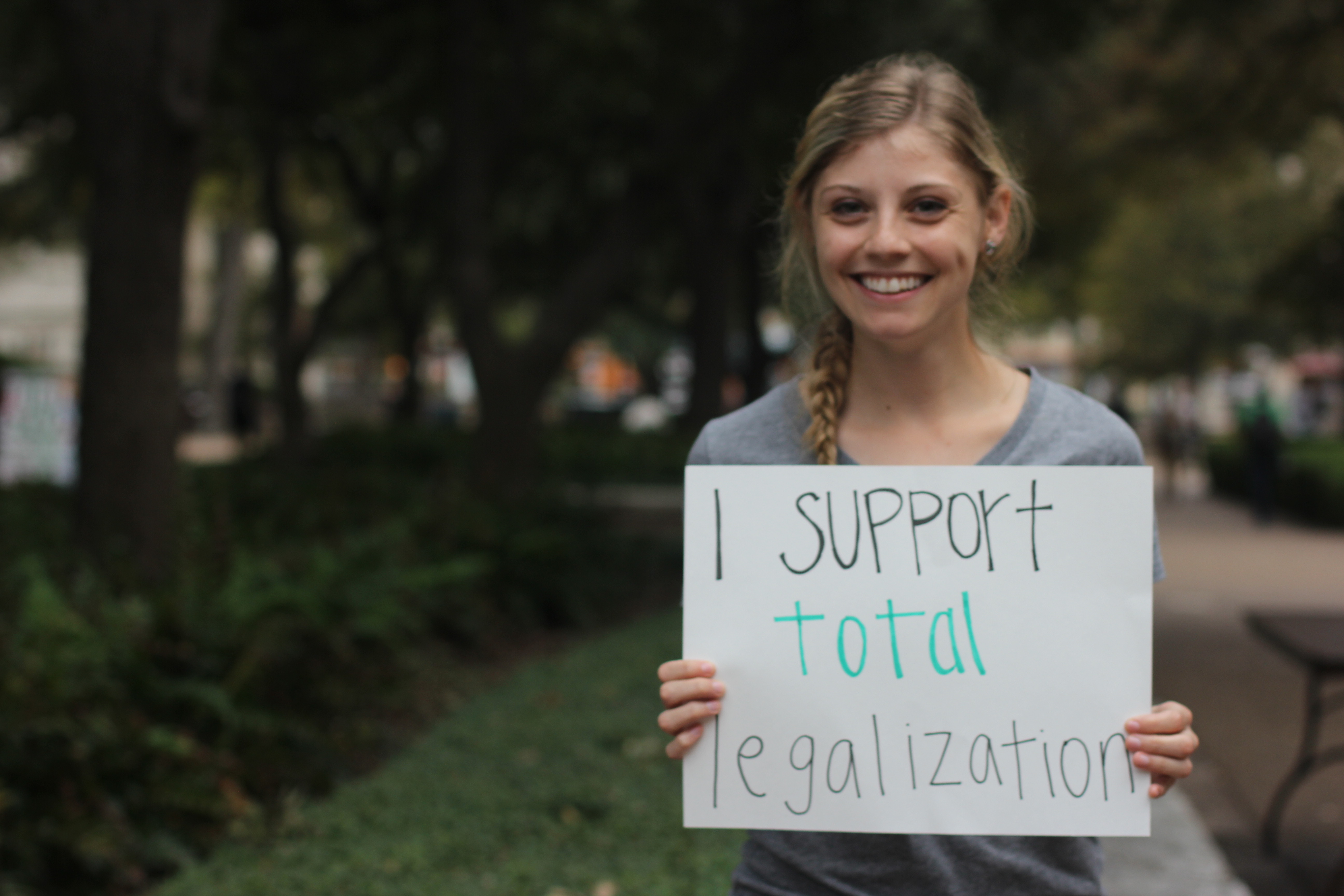 "Honestly I just feel like it's a drug that everyone does anyway so the government might as well tax it and make revenue off of it," said Heather Grosenbacher 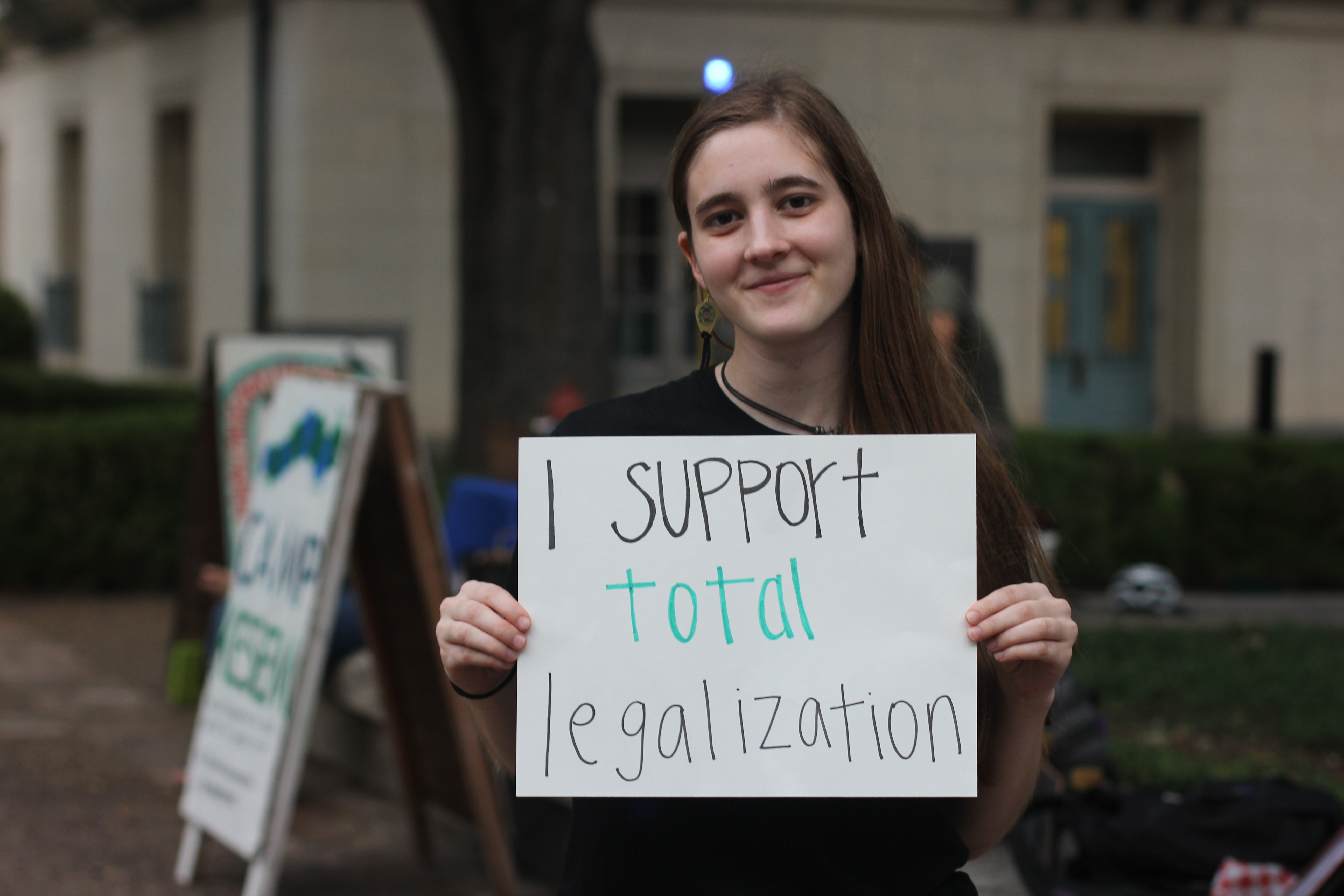 "I support legalization of medicinal marijuana because it has been proven to be a beneficial treatment to certain illnesses. However I also support total legalization because there is so much governmental money going into prisons as well as all of the other negative aspects of the drug. I also don't think there are enough studies testing the drug going on. If we legalize it, then more studies could be done of the drug's addictive qualities. I've been clean from the drug for three years and four days - I wish I knew how to avoid the addictive aspects marijuana so I could use its benefits to those suffering from depression," said Kaity Dallas 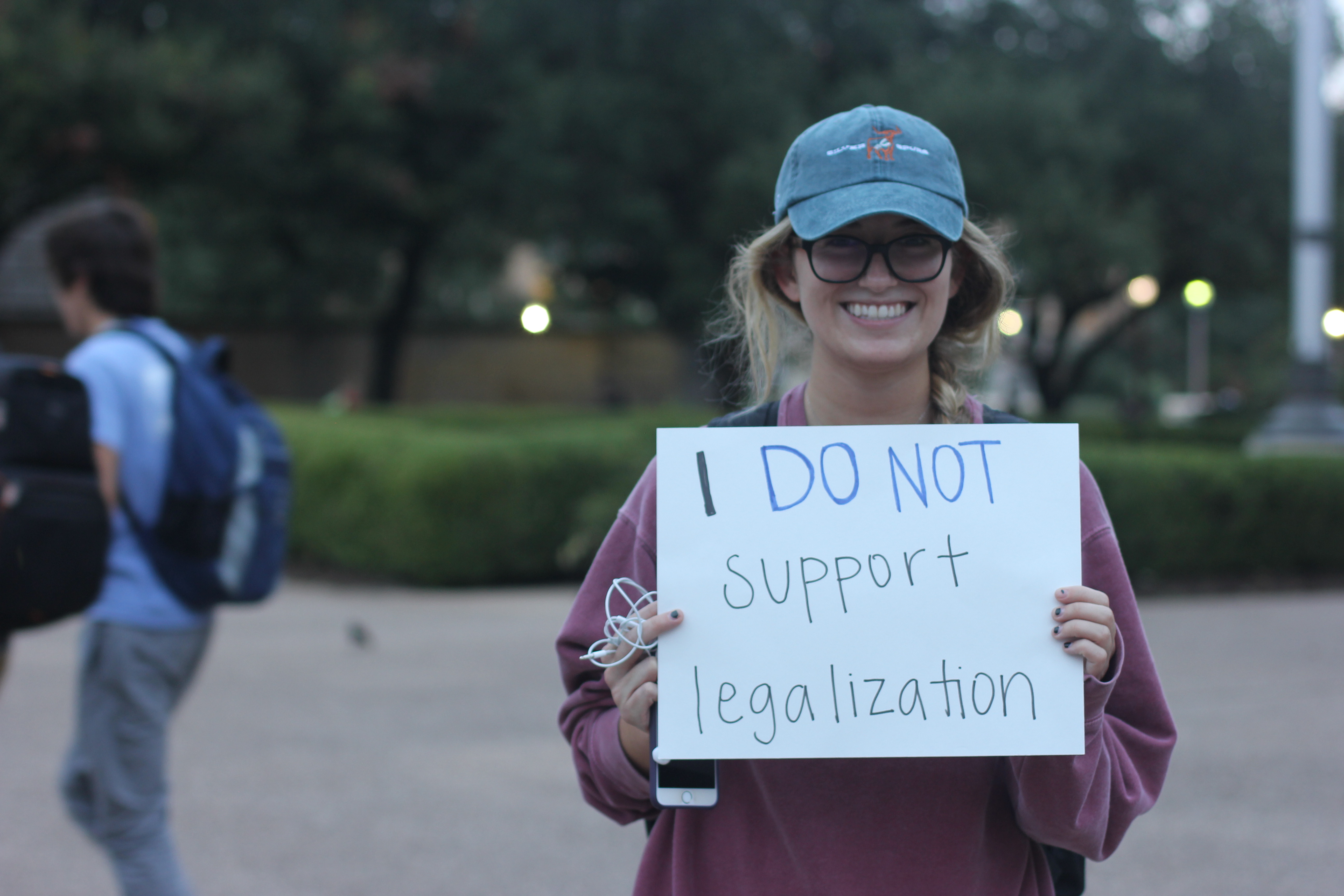 "I do wish it was decriminalized, but I think legalizing it might just open up a can of worms," said Savannah Ricci 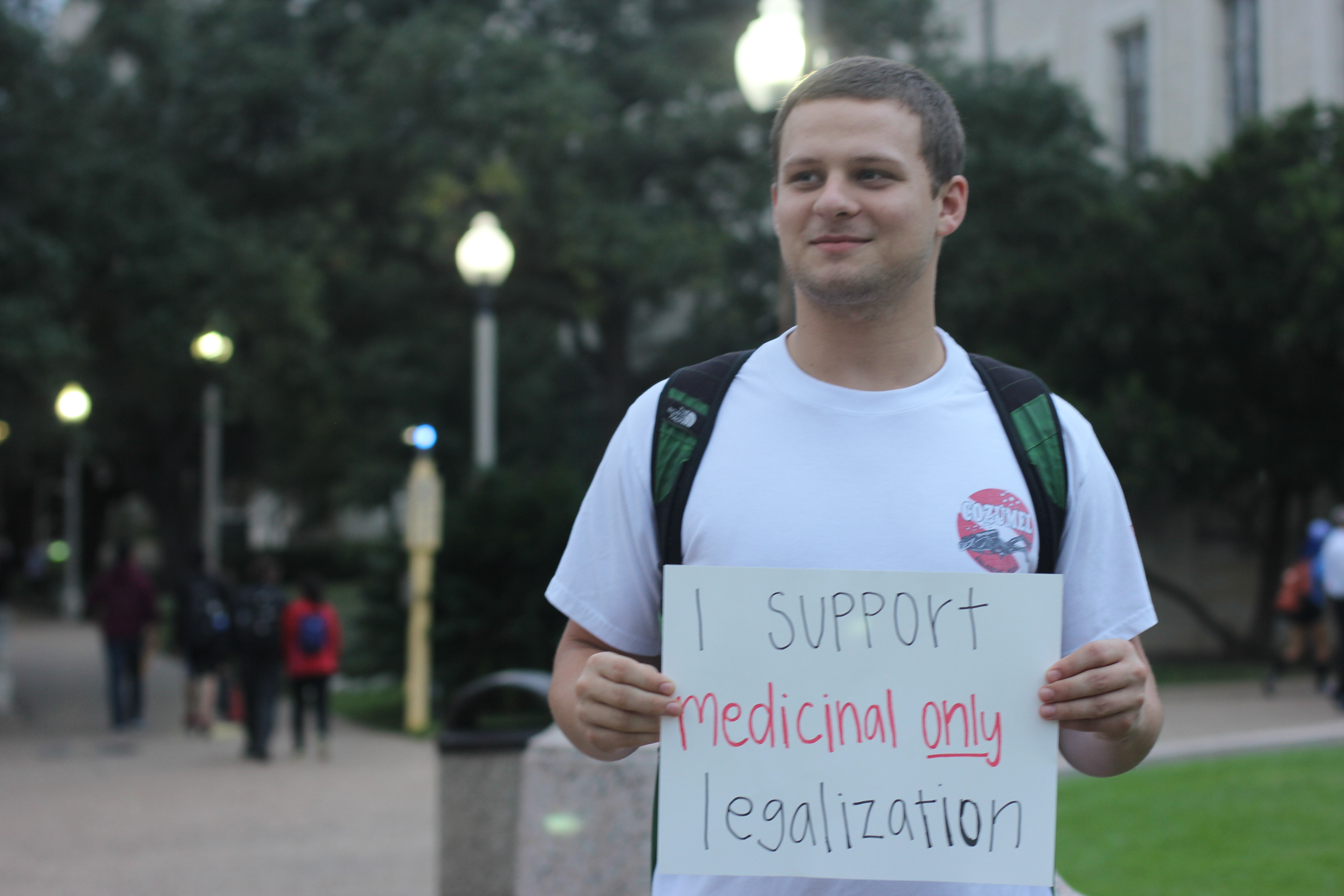 "I personally know someone who has Crohn's and smoking is the only way he can eat, but I'm not sure if I support the legalization of recreational use," said Jack Savage 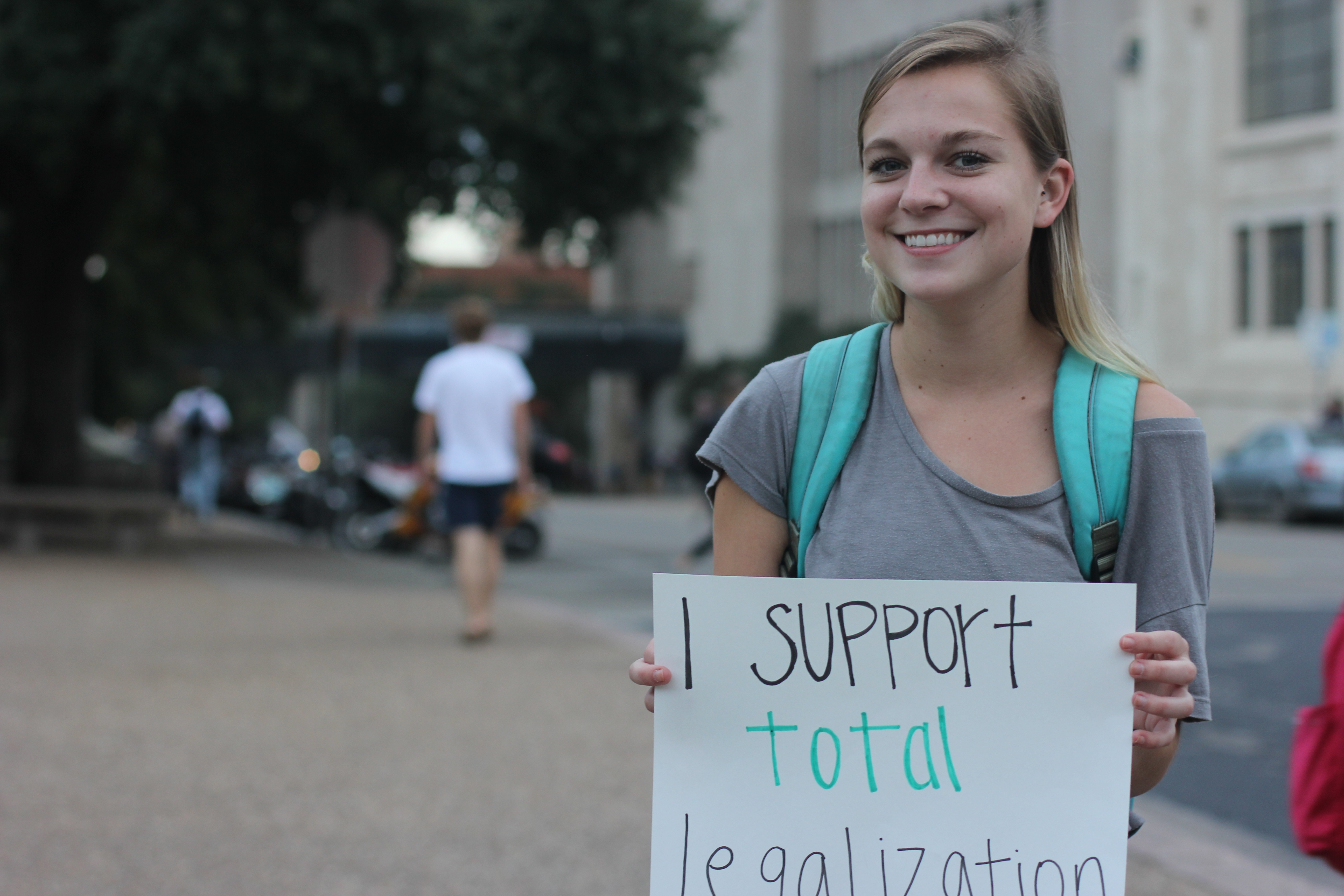 "No one has ever died from marijuana yet it's not legal when I know several people who have died at the hands of alcohol and that's legal," said Sarah Jane Taber 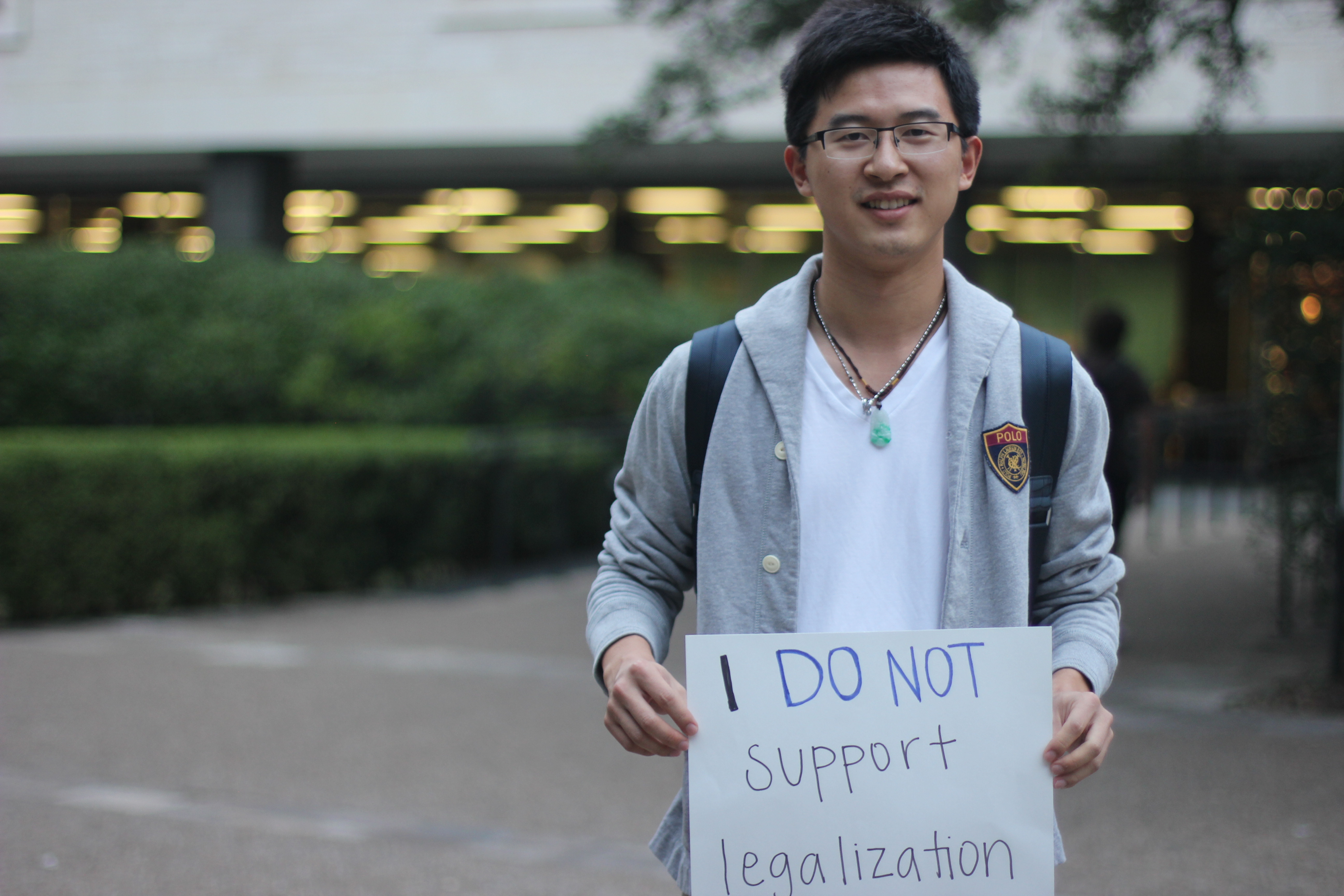 "I just don't support it. That is my stance," said Kevin Ma