As the oldest of her four siblings, Cecilia Flores said she wanted to be a role model to her sisters and go to college but knew money would be an issue for the family of six.

“I had no idea as to how we would pay for college considering we were a big family and my parents were barely making enough money to sustain us,” Flores said.

Flores is one of hundreds of students at the University of Texas who will benefit from its relatively new initiative called Texas Advance, a program aiming to increase socioeconomic diversity on the Forty Acres.

The initiative, which began in August 2014, aims to help under-resourced students in the state who are at the top of their class. With the help of federal and state grants, students in the Texas Advance initiative receive can receive award amounts up to $15,000 a year. Scholarship programs like the Presidential Scholars and University Leadership Network help students cover tuition and fees and offer outreach programs for students.

Last year, the university said it committed $15 million for the program to help 750 students throughout four years. In a release, UT said the initiative expanded to $20 million and will now help about 1,000 students over the next four years.

For the 20-year-old from Eagle Pass, Texas, the initiative gave her the opportunity to pursue a dream of higher education.

“Money was going to be the deal breaker in this case,” Flores said. “I was either going to UT or I was staying in my hometown to start community college.”

Flores graduated from C.C. Winn High School, which lies in a small border town. As a first-generation college student, it was difficult to transition to the challenging workload.

“I come from a really small town and when I got here it was a huge difference. It was really difficult to adjust to that. But ULN helped me,” Flores said. “I really had no idea how to manage my time. They were the ones who guided me to getting used to the college experience.”

But despite the challenges, Flores excelled.

She is currently a junior and a double major in psychology and Iberian and Latin American languages and cultures. Flores is one of the several Longhorns who will be in the first graduating class benefitting from the Texas Advance initiative in May 2017.

“It’s important for the university, being the flagship public university in the state of Texas, to make sure we have opportunities for students of all socioeconomic backgrounds to be able to attend UT if they would like to,” Connerat said.
Code:
The university identifies students from low-income families in multiple ways. Diane Todd Sprague, director of financial services at UT, said one criteria includes students who qualify for federal Pell grants.

Students receiving Pell grants accounts for 25 percent of the student body this year at UT, Todd Sprague said. Compared to other Texas universities, she said the population of students who receive grants is relatively normal. 21 percent of Texas A&M’s student body, for example,  received Pell grants for the 2015-2016 year, according to Todd Sprague.

“We are here for a purpose. We want to serve the citizens of Texas. Obviously we pay attention to the demographics of the state,” Todd Sprague said.

The initiative is paid for with legislative funding and thanks to the Houston Endowment this year, $8 million dollars will help sponsor 125 students from the Houston area for the next three entering classes at UT.

On the Whole: Texas Colleges

Connerat said when the Houston Endowment learned about the Texas Advance initiative, they were interested in helping the program.

“They were very excited about the program and how we are really focusing on helping these students to come to UT to develop leadership skills and professional training,” Connerat said.

With the help of the endowment, the university will be allowed to free up funds to help more students as well, Connerat said.

“It’s a $8 million grant to cover the costs of those students from the Houston area. Because of the Houston endowment, that allows the university to use funds that would have gone to pay for that  to give to other students through the Presidential Scholars program or whether it’s through financial aid,” Connerat said.

For the entering class of 2016, the deadline to submit an application for admission and to be considered for a Texas Advance award is Dec. 1. 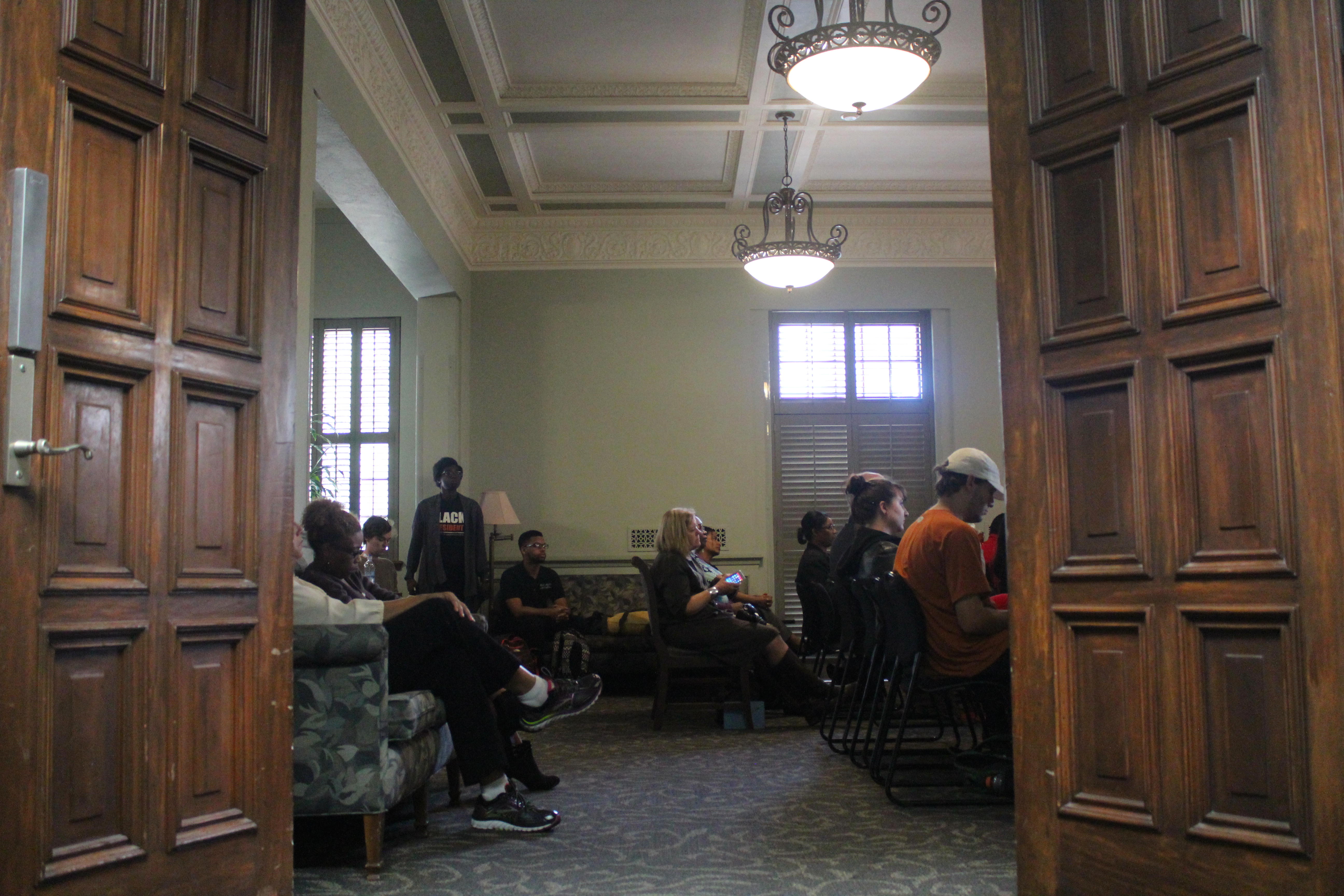 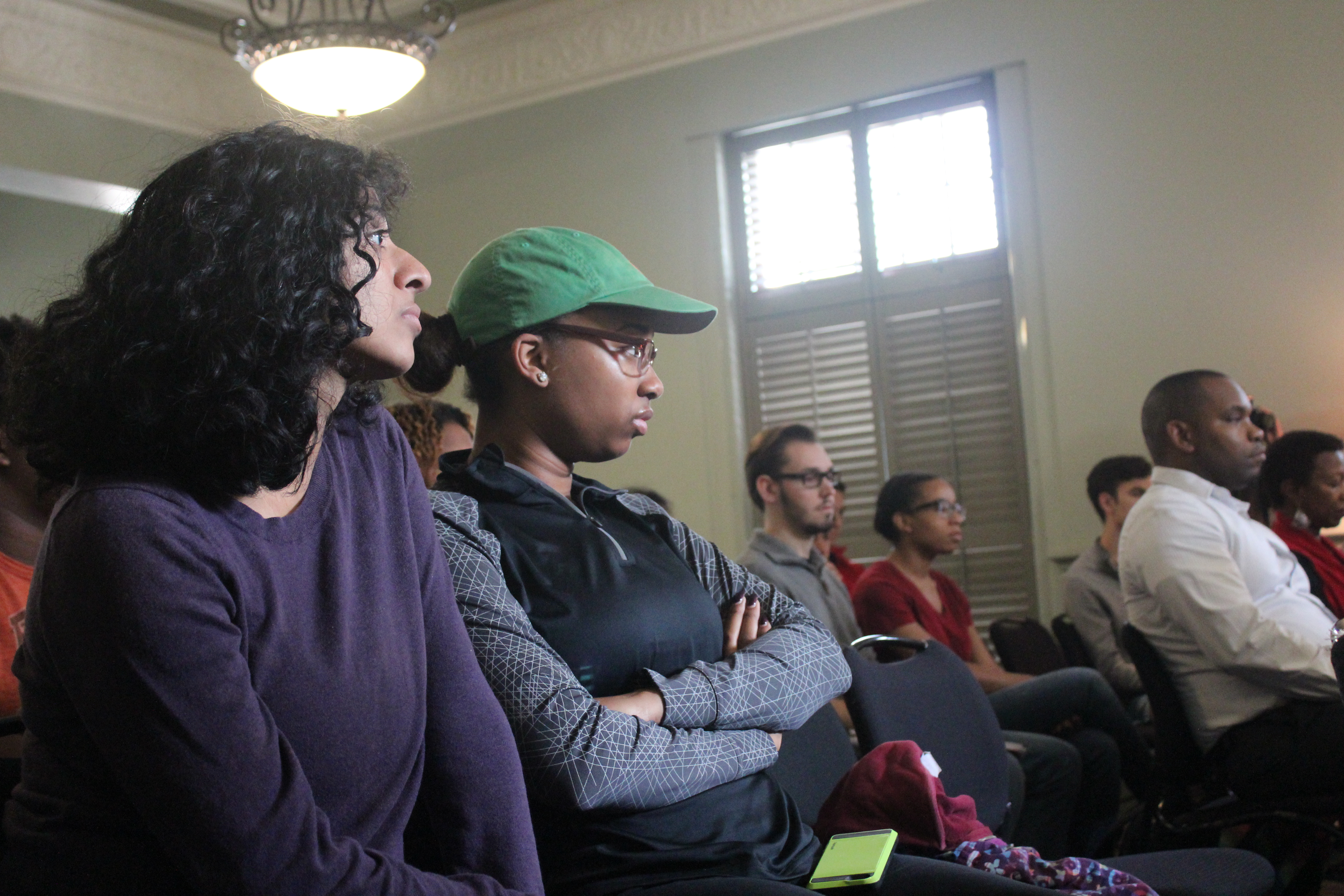 UT Austin students, staff and faculty gather in the Sinclair Suite for the "Texan Talks" panel on diversity. Photo by Jan Ross Piedad. 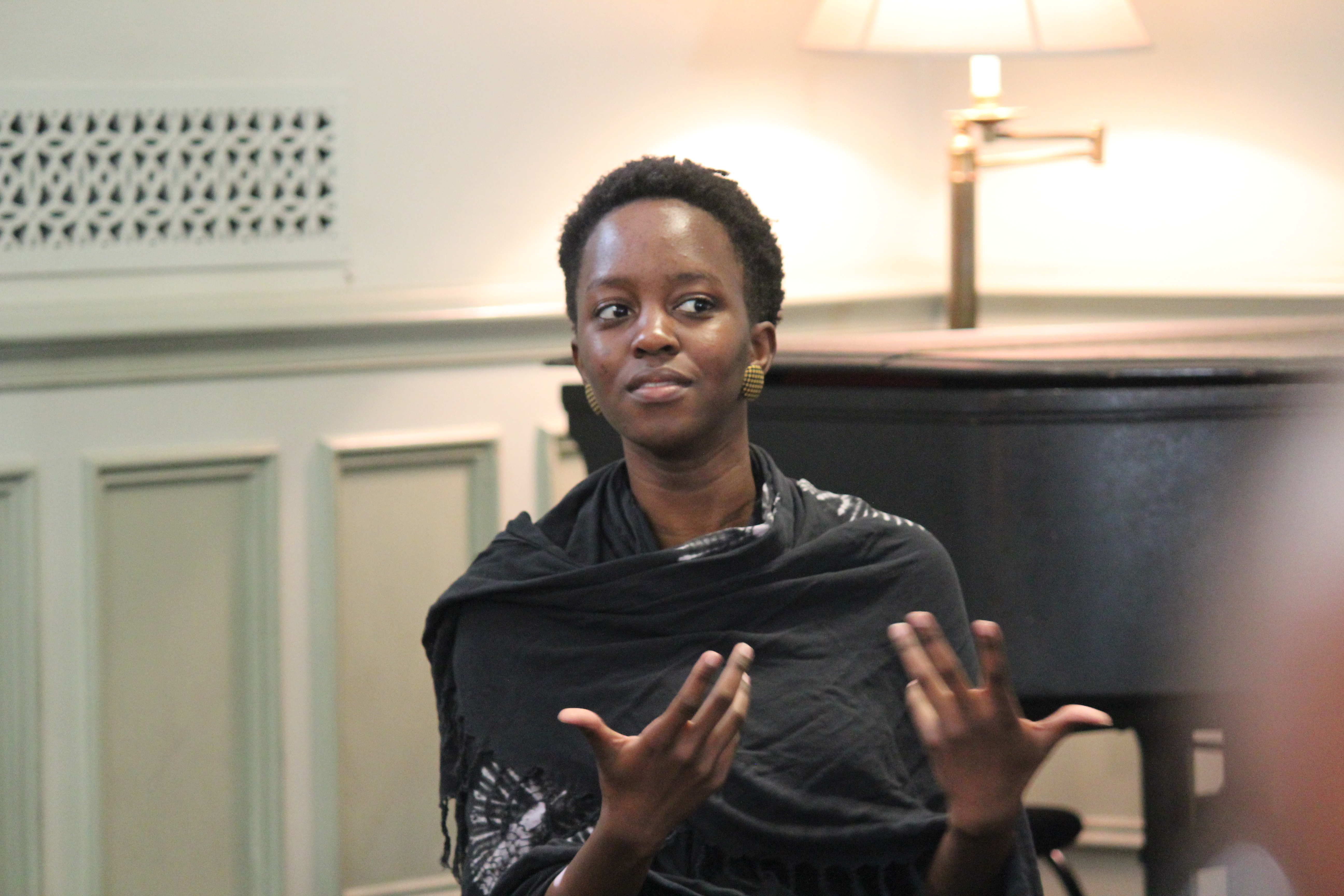 Loyce Gayo, president of the Society for Cultural Unity and contributor to The Daily Texan, majors in African and African diaspora studies at the University. Gayo was one of five panelists invited to speak on diversity. Photo by Jan Ross Piedad.
Inside UT Austin's Campus Resources
Students may pass by safe havens for different demographics on campus, but how many of us know what these resources look like? 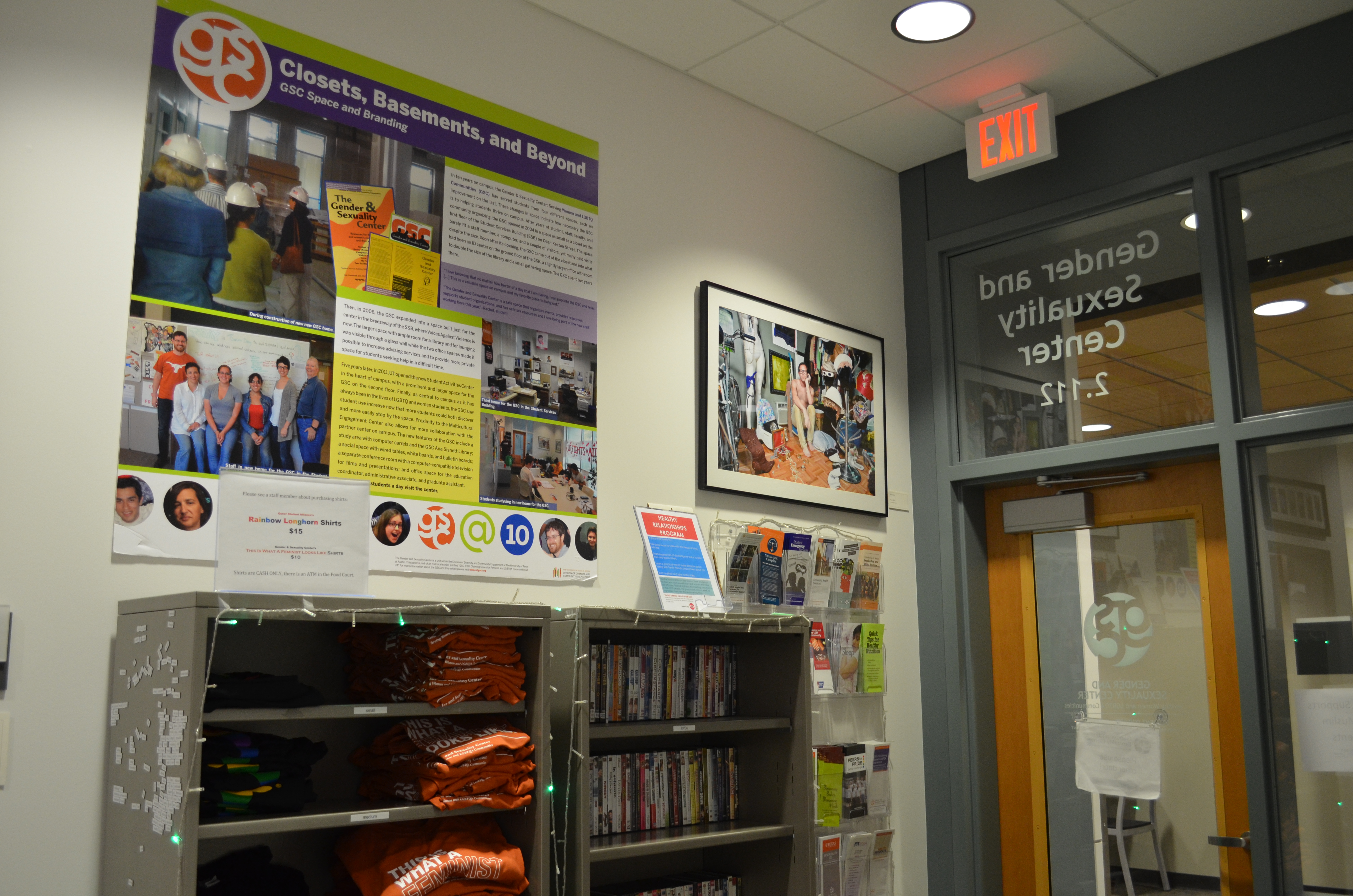 Inside UT's Gender and Sexuality Center located at SAC 2.112. The center was founded in 2002 as a joint project Women's Resource Center (est. 1997) and the GLBTA agency (est. 2001). Their mission is to explore, organize and promote learning around issues of gender and sexuality. Photo by Jade Magalhaes 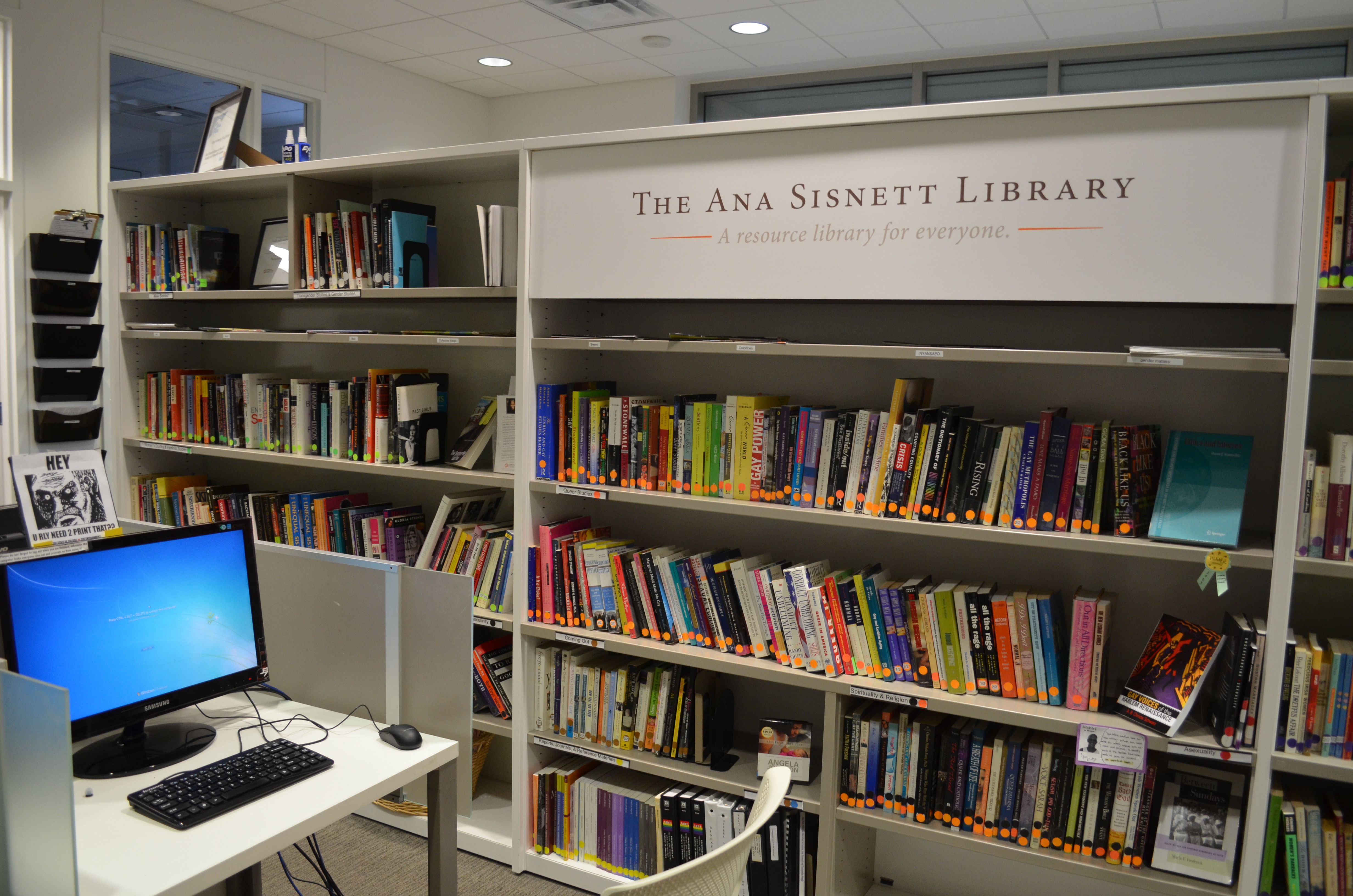 The Ana Sisnett Library is a resource for LGBTQ students at UT's Gender and Sexuality Center. In 2011 the space won the title of "Best Naming of a Library" by the Austin Chronicle. Sisnett was a celebrated author, educator, activist and artist. Photo by: Jade Magalhaes 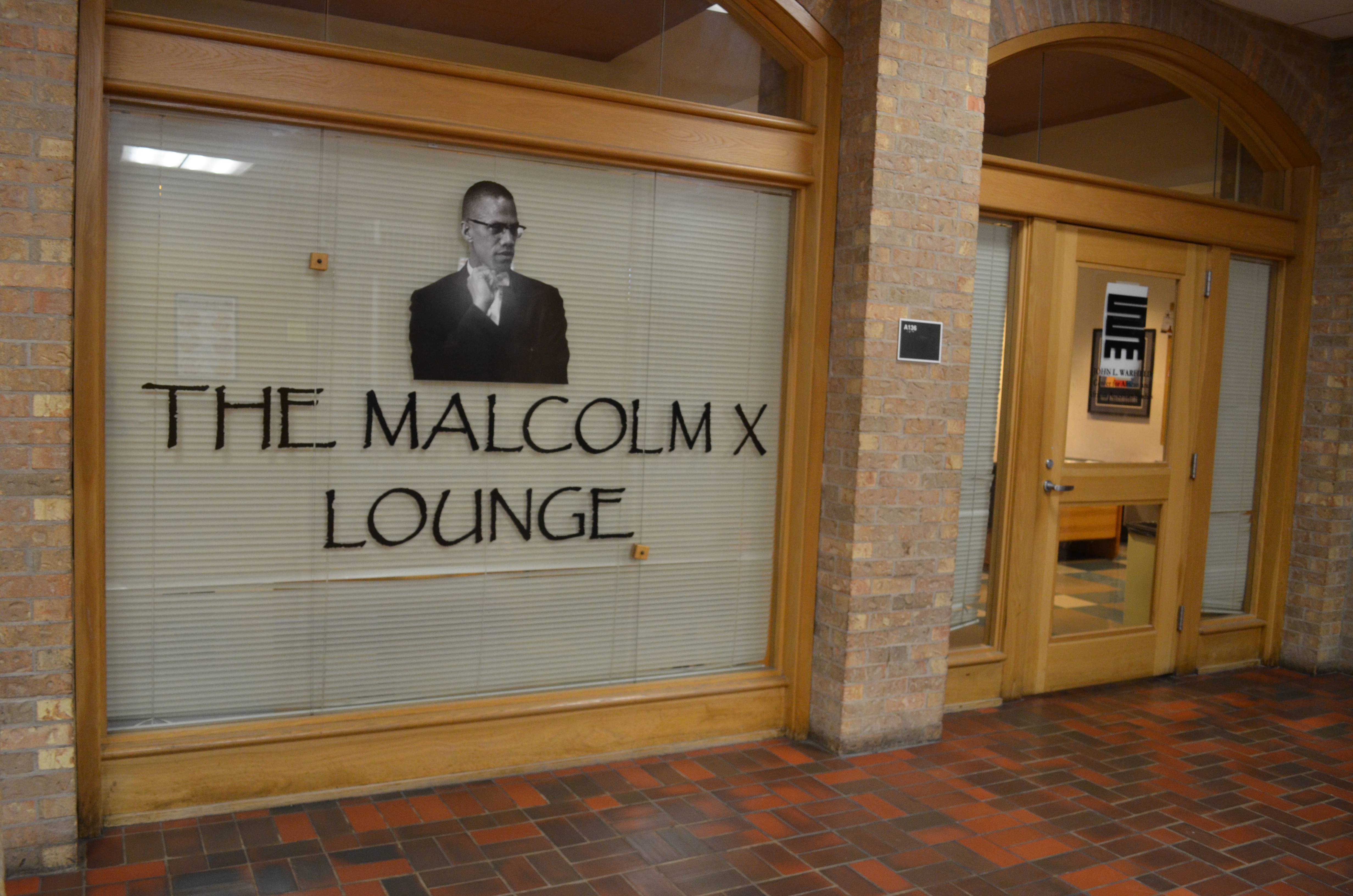 The Malcom X Lounge located on the first floor of Jester dormitory offers a place for black students to be around other students from the same racial background. The space was first opened in 1995 after black students pushed to create an area for their community on campus after the university closed their unofficial meeting space. Photo by Jade Magalhaes 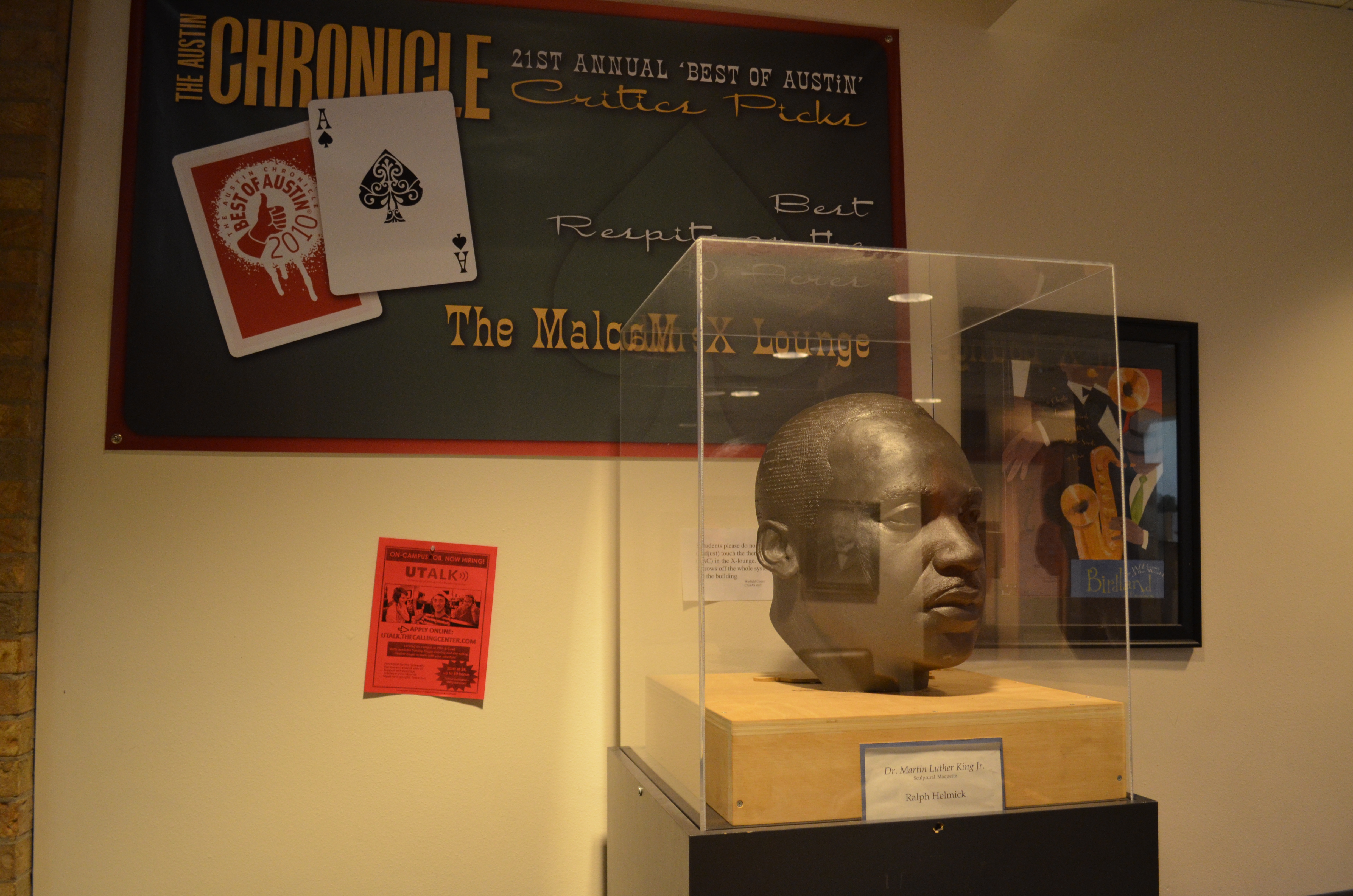 A statue of Dr. Martin Luther King Jr. stands inside The Malcom X Lounge. Today, the lounge is run entirely by students and gives room for black student organizations to hold meetings, events and store their materials. Photo by: Jade Magalhaes. 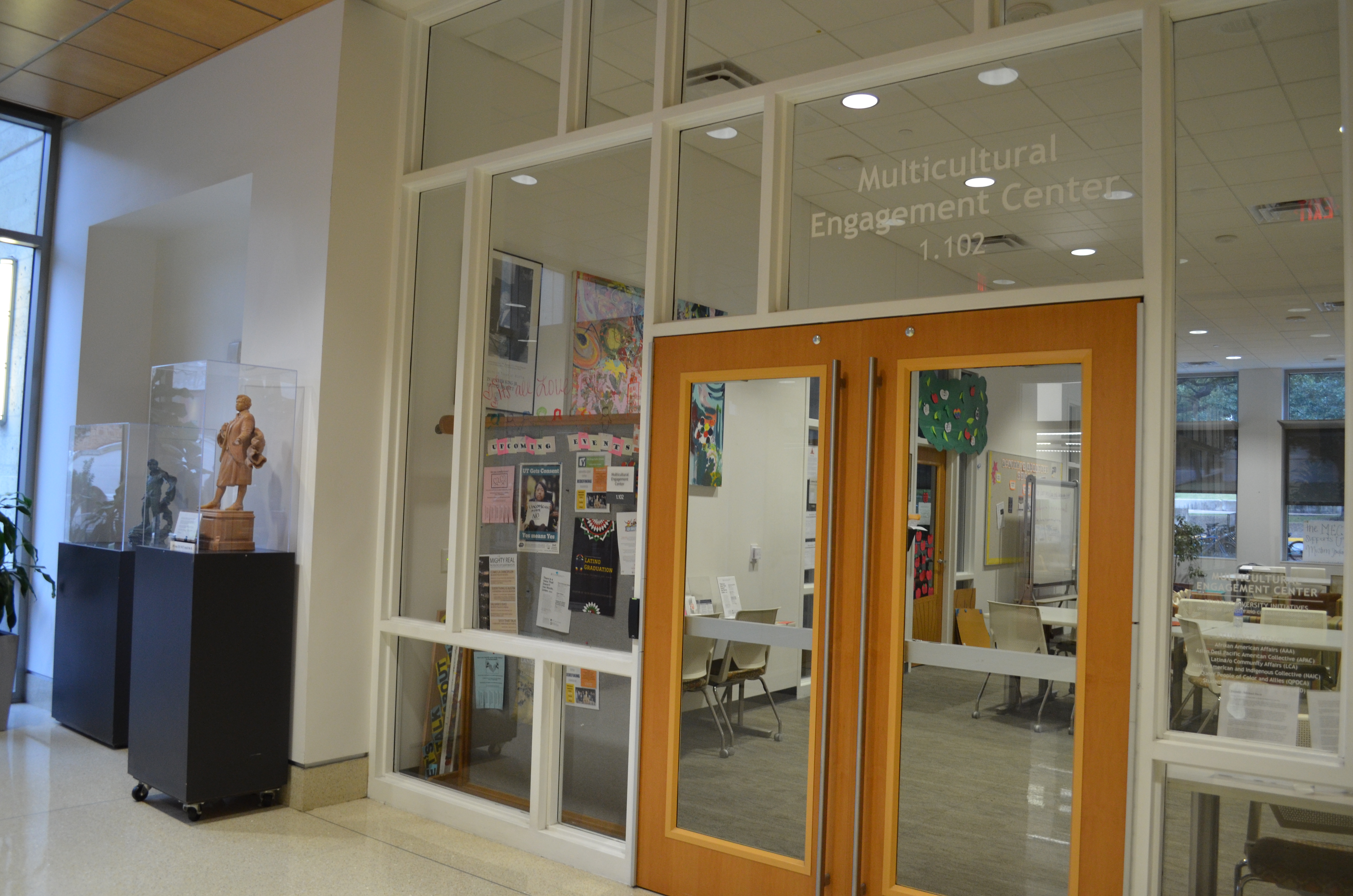 The Multicultural Engagement Center (SAC 1.102) is a student resource that educated and empowers minorities to be leaders and agents of social change. Established in 1988, the center is now on its 27th year. Photo by: Jade Magalhaes 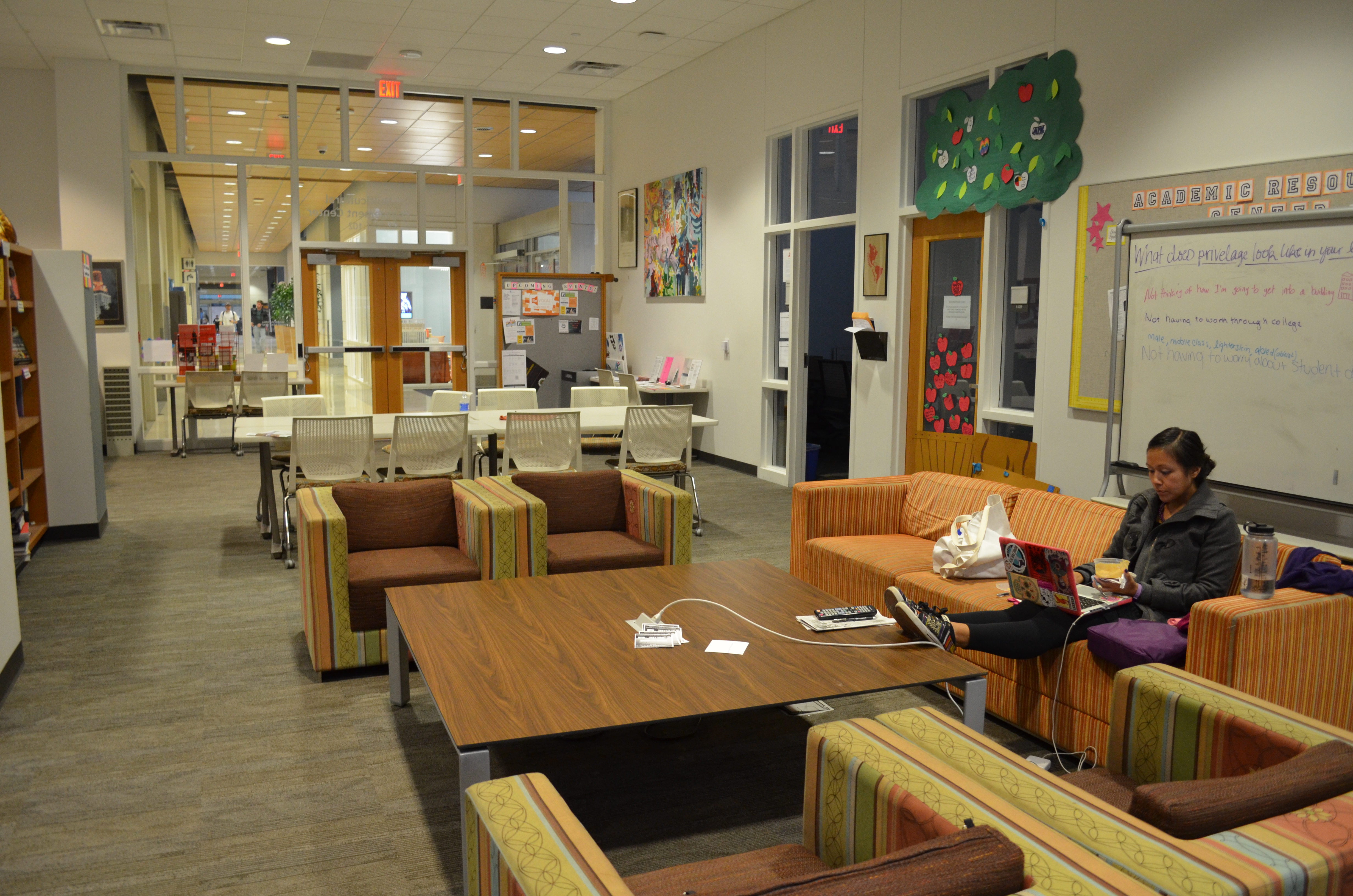 A student uses the Multicultural Engagement Center (MEC) to study. Originally named the Minority Information Center to support black and latino students, the MEC was renamed in the 1990s to include Native and Asian Americans to its mission. Photo by: Jade Magalhaes. 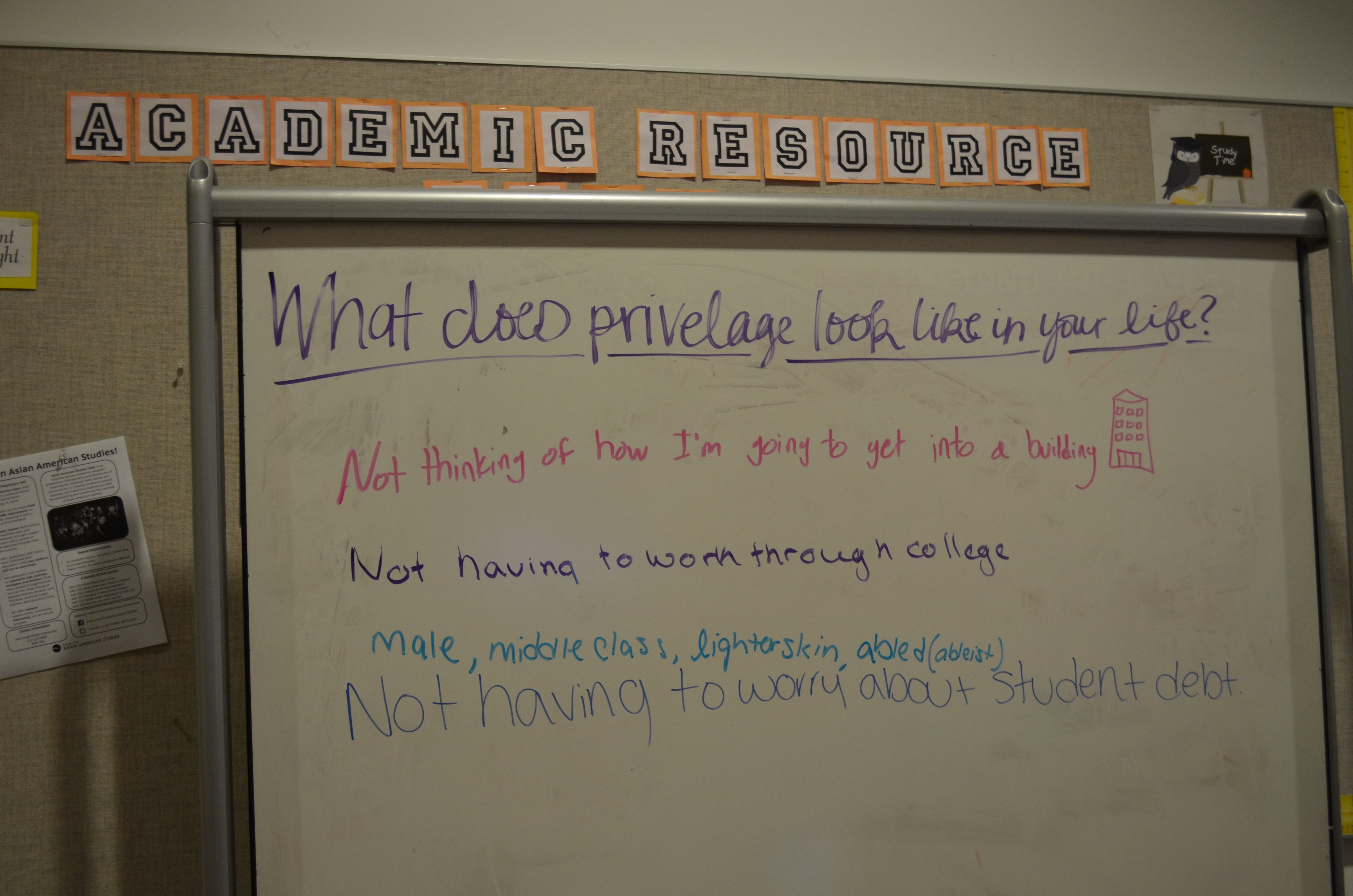 Students brainstormed what privilege looks like in their lives. The MEC is now part of UT's Division of Diversity and Community Engagement to foster a more inclusive climate on campus. Photo by: Jade Magalhaes. 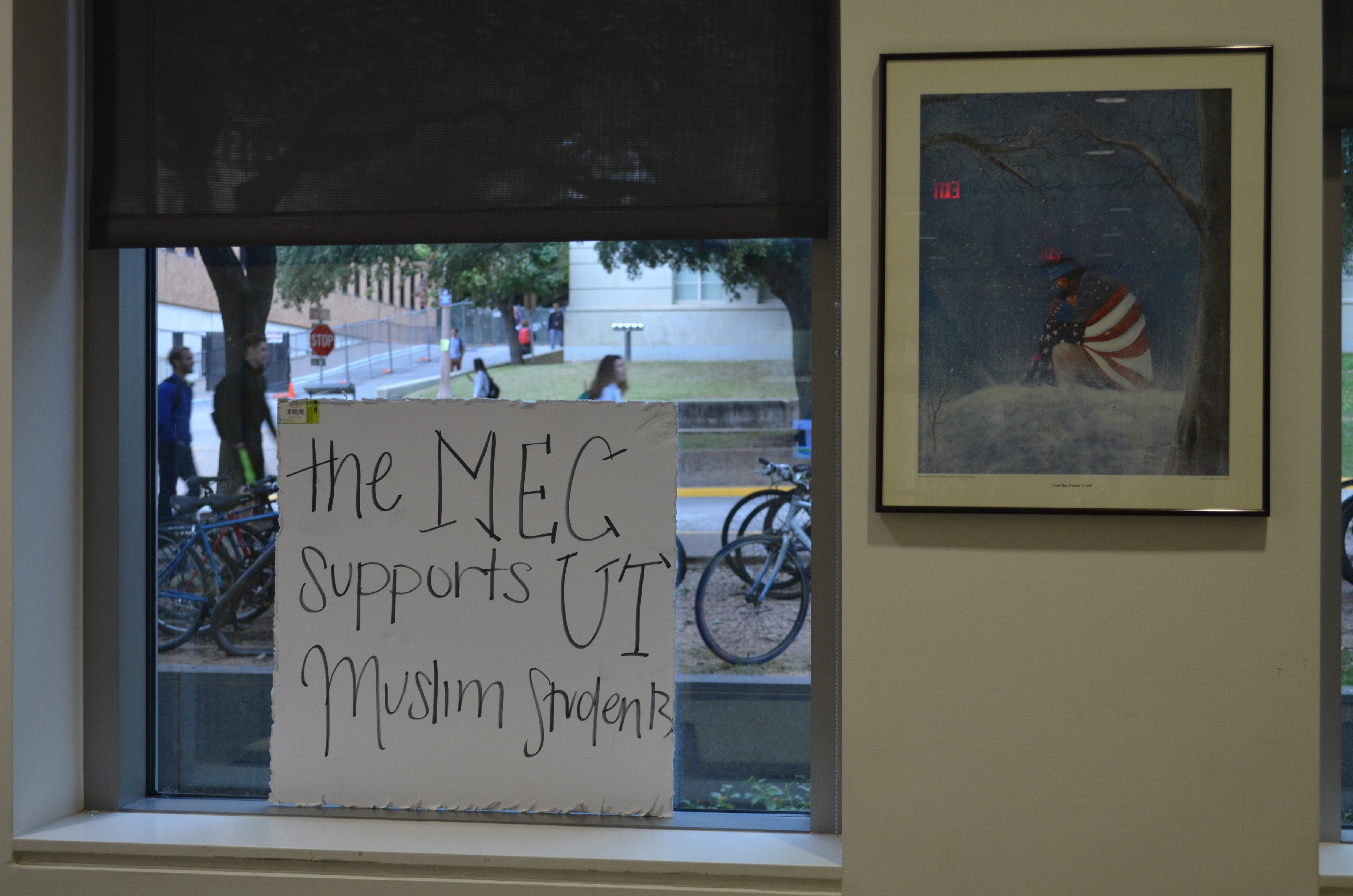 Amid recent controversy over muslim refugees, the MEC expresses their support for muslim students. The center offers academic and programmatic advising to students and their ethnic organizations so that they can envision and implement desired programs. Photo by: Jade Magalhaes.