Art in Public Places Celebrates 30 Years of Art and Community

Austin is dotted with murals, mosaics, and colorful art installations. Art is displayed as panels at a library and along the rail of a pedestrian bridge. These pieces are installed through the Art in Public Places program. Art in Public Places just celebrated its 30th anniversary of collaborating with artists to showcase art throughout the city.

“It’s the art that belongs to the people of Austin,” said Jennifer Chenoweth, local artist of “The Public Sentiment Campaign,” a colorful piece that represents people’s’ experiences in places such as a park or a street intersection.

Art in Public Places hosted an art crawl in East Austin in conjunction with the EAST Studio Tour.

By ordinance, 2% of every capital improvement project budget is allotted for art. Artists are chosen by a panel and the work is usually installed during construction of the project. 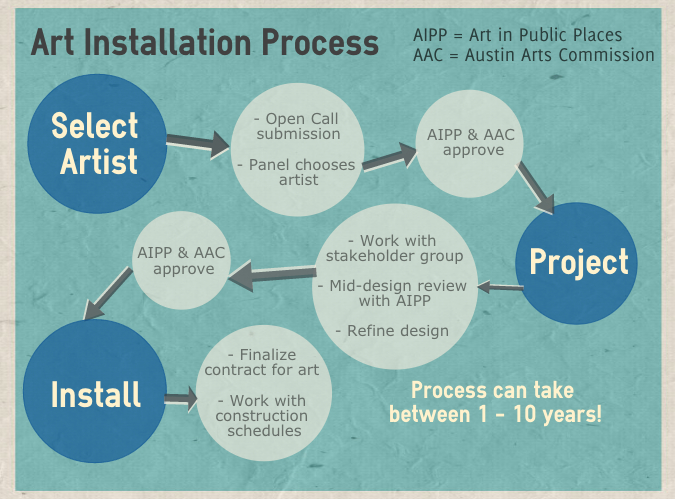 “The Public Sentiment Campaign” is one of ten TEMPO 2015 pieces and one of about 200 public art pieces.

“I think the artists in Austin need the respect that Art in Public Places provides them,” said Ester Mathews, participant at the 30th anniversary celebration. “When you integrate the art [into construction], you have a better relationship [between artist and community].”

Chenoweth says that the Austin community influences her art.

“I have to create things that are interesting visually but also give people an experience to interact with because I’m making art for people in Austin,” she said. Austin public wants art that is about “life, challenges, or impactful rather than passive pieces of art.” 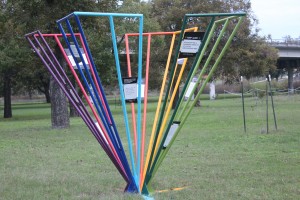 Chenoweth started with her project, the “XYZ Atlas” in 2003 and asked people about their experiences in Austin and their location. She expected only locations, but also received stories.

“The stories were all anonymous so people felt free to tell their personal and intimate stories and that was very exciting and inspiring to read,” she said. Dorothy Johnson, writer and content editor, reached out to her to collaborate a piece to “engage people about place.” “The Public Sentiment Campaign” is now located in Boggy Creek Greenbelt.

Chenoweth said that technology and society is always changing, therefore Austin continues to influence her work.

“I feel like I’m already behind if I’m not ten steps ahead,” she said.

For more information on Art in Public Places, visit www.austincreates.com.

This map shows all the TEMPO 2015 and a few permanent AIPP pieces. Full a full map click here