When babies are kept in dirty, wet diapers for an extended length of time, they are suffering from diaper need. A silent crisis in America, diaper need affects 1 in 3 mothers according to a study conducted by Huggies.

The expense of disposable diapers, averaging around $1,200 a year for one child, often leave low-income families to choose between diapers and other basic needs, such as food.

Struck by the lack of diaper aid available to families here in Austin, Beverly Hamilton founded the Austin Diaper Bank in 2013.

“Often diapers are a dollar a piece when you buy them at the store and that ends up being a huge cost over time,” Hamilton said. The Austin Diaper Bank estimates that nearly 12,000 babies and toddlers are in a diaper need situation, based on 2012 US Census Bureau data.

“Now that’s just on poverty numbers alone. There are a lot of other people who for various reasons, usually crisis type situations or big life changes, inflate those numbers as well,” Hamilton said.

In Travis County, about 20,000 people total are likely in diaper need, including elderly, the impoverished and homeless, and people in crisis situations, said Hamilton. Despite the need, diapers are not covered under any federal assistance program.

The Austin Diaper Bank is able to provide families in need with diapers through 45 partner agencies across central Texas.

In three years, the Austin Diaper Bank has given out over 400,000 diapers and helped over 5,000 people with diaper need. This year they are distributing about 10,000 diapers per month, which is already an increase over last year’s distributions.

“There are so many reasons why diapers are important for the day to day life of some people,” Hamilton said.

The Austin Diaper Bank relies heavily on diaper donations and volunteers to operate.

“We couldn’t have a diaper bank without volunteers,” Hamilton said.

While disposable diapers offer convenience, cloth diapers can offer parents a more eco-friendly and cost-effective way to care for their children.

Whitney LeBlanc, owner of Austin’s Enlightened Baby, wanted to create a space for people to purchase all natural baby products in one place. Environment, cost and safety for your baby are a few reasons it’s important to use natural products, said LeBlanc.

“Washing machines can do today what they could not do back in the day, you used to have to, like, soak them in a vat in the backyard to get the poo off,” LeBlanc said, “I know why disposable diapers were invented, but we don’t have to do that anymore.”

LeBlanc went on to say that disposable diapers are convenient and we’ve come to rely on that, as a society.

“We actually don’t know how to diaper any other way, so we are having to totally relearn how to use something that’s reusable,” LeBlanc said. “Cloth diapers are fantastic for your pocketbook.”

The cost of disposable diapers can add up considering that babies are in diapers for about 30 months.

Alecia Page, a mother of two kids in diapers, has always used disposable diapers for both of her children. Page loves the idea that cloth diapers are better for the environment and a cheaper option in the long-run, but still ultimately made the decision to use disposable diapers.

“The first and most important factor in our decision was that at the time of both of my children’s births we lived in an apartment without a washer and dryer and I felt it would be inappropriate to wash soiled diapers in public washing machines,” Page said.

In addition, with a one-person income for the family of four, the initial cost of cloth diapers was something they couldn’t afford at the time, despite any future savings.

“It’s an initial upfront cost, but we’ve found that it’s about four and a half months of a break-even point,” LeBlanc said.

LeBlanc explained that for cloth diapers, parents are only paying for the first four to five months, the other 25 months is savings. According to her, even if they’re using the most generic disposable diapers, that’s a minimum of a $1,000 they can save.

Despite the differences, cloth and disposable diapers are actually similar in a lot of ways.

“All-in-one cloth diapers are just like disposables, in terms of use, it gets soiled, you take it off, and you put a new one on,” LeBlanc said, “The difference is, you put it in a bag to be washed, versus putting it in a bag to go sit in a landfill somewhere.”

Cloth diapers are also important to Austin Diaper Bank’s cause, said Hamilton, “cloth doesn’t solve every problem, however, because a lot of people that we help are in shelters, they don’t have the ability to do all that washing and for our homeless population, it’s certainly not an option.”

There are a lot of options within cloth diapers, providing parents with the flexibility to choose what fits best for their lifestyle. The three most popular kinds include: prefolds and covers, pocket, and all-in-ones.

LeBlanc said parents would need about 25 to 30 cloth diapers for the entire 30 months that the baby is in diapers, versus the 7,000 to 10,000 disposable diapers needed for the same period of time.

To supply a baby with all of the cloth diapers they will need over the course of 30 months, depending on the type, can cost anywhere from $250 to $700, saving parents at least 58 percent in comparison to disposable diapers.

“We definitely offer [cloth diapers], but at the same time we know the realities of our society mean that we need disposables,” Hamilton said. 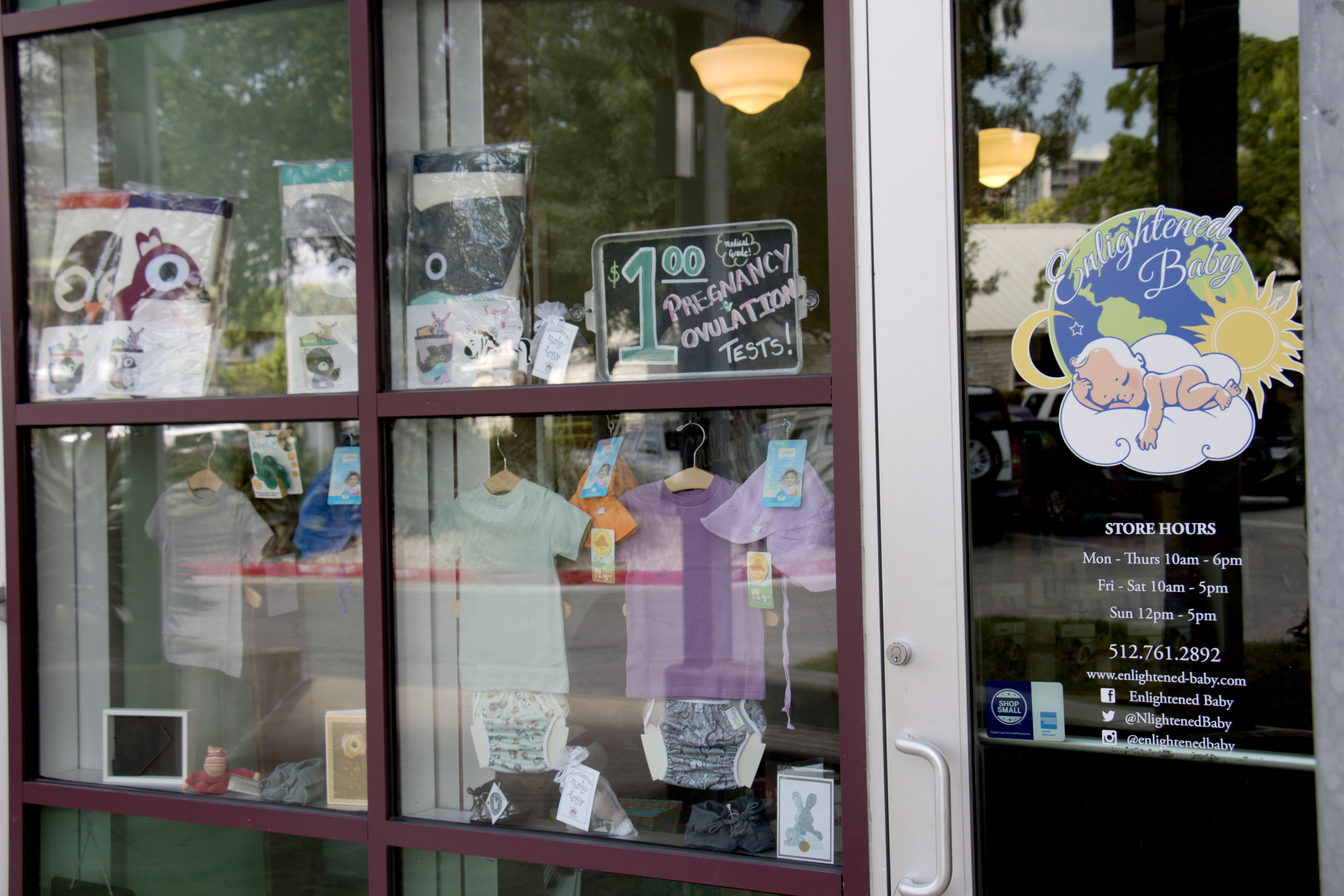 The Outside of Enlightened Baby, a store that provides cloth and organic diapers along with other infant products. 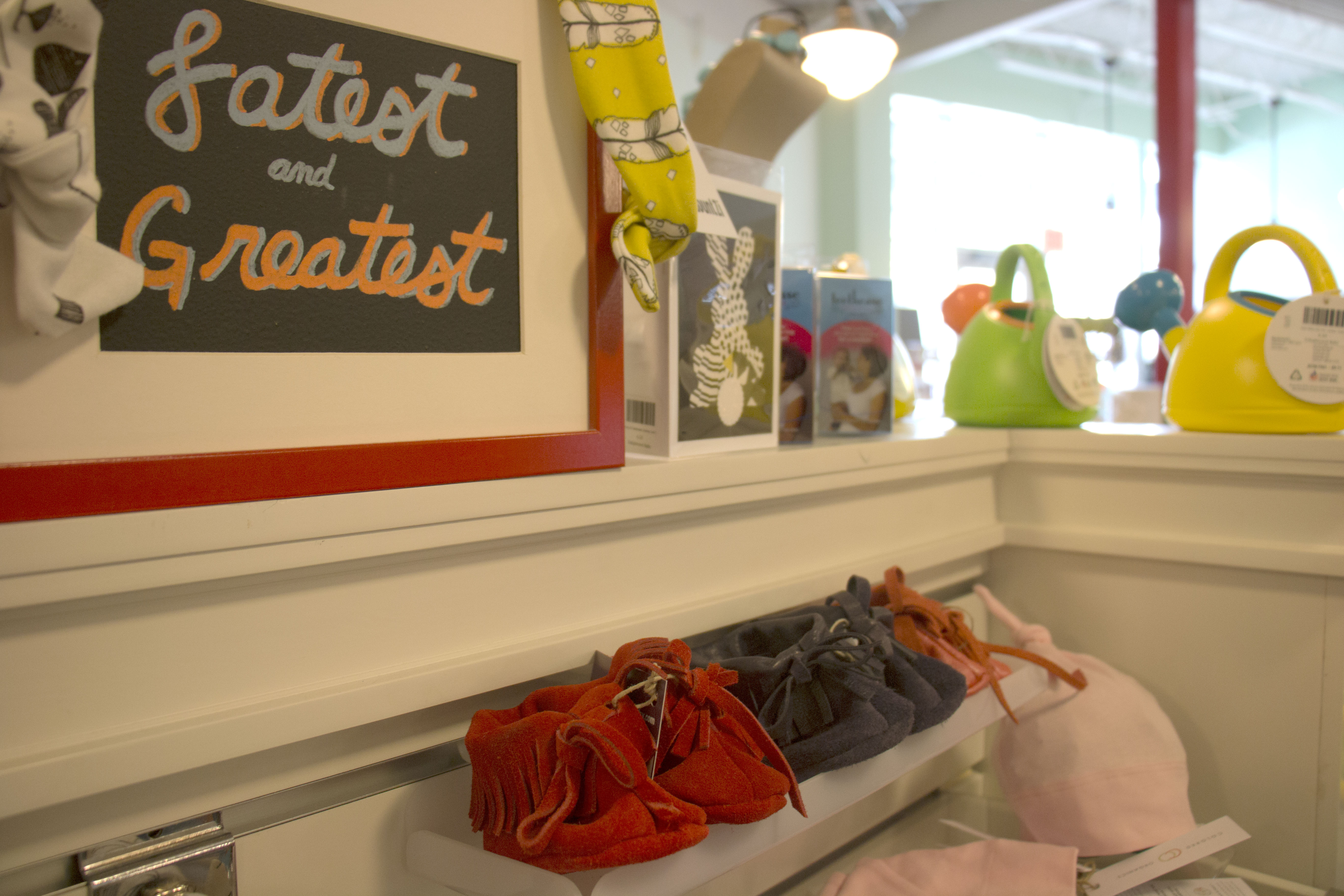 In addition to cloth and organic diapers, Enlightened Baby carries shoes and other organic and eco-friendly baby supplies. 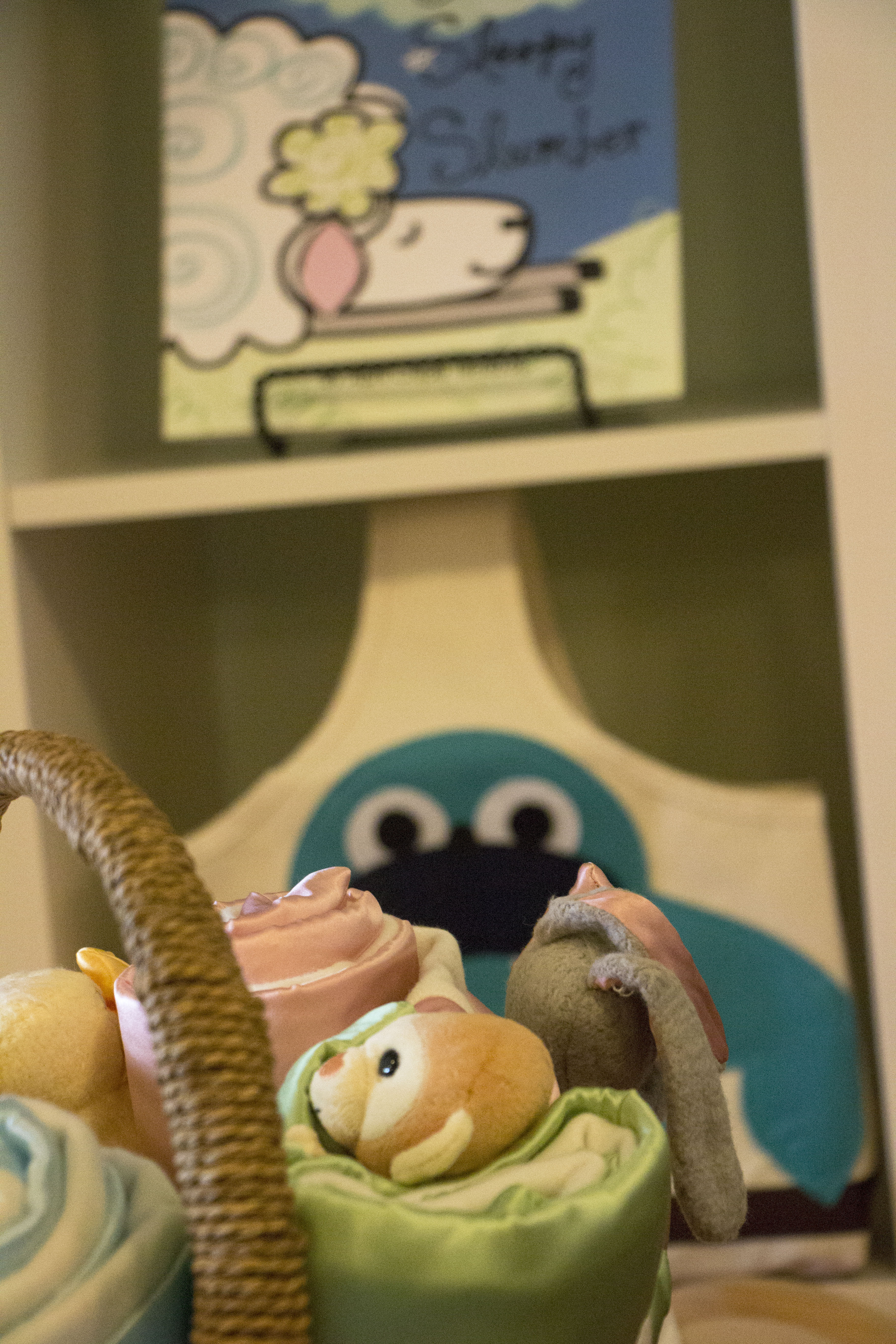 Detail of some of Enlightened Baby's goods. 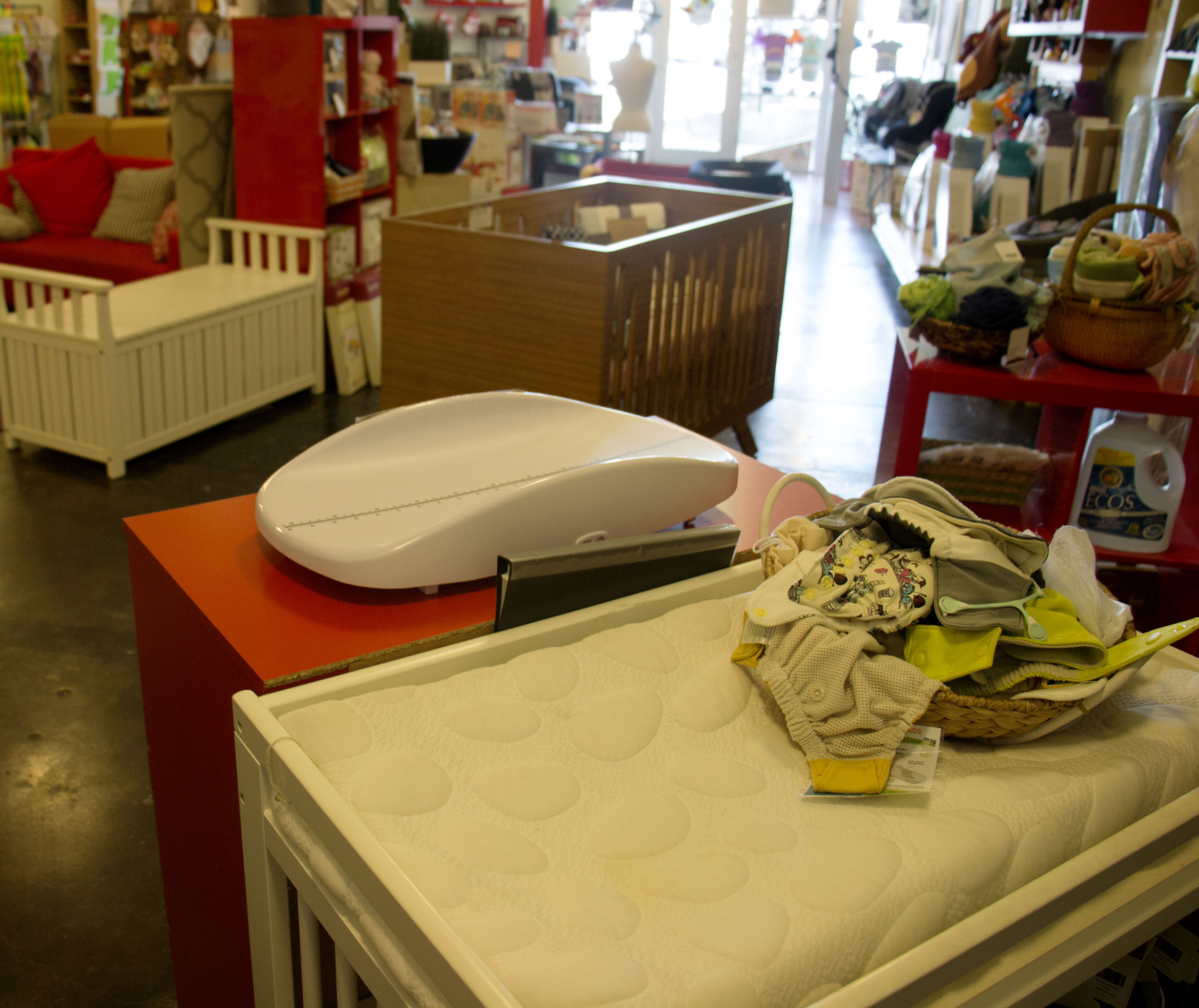 Customers at Enlightened Baby can see how to work with cloth and organic diapers at a station like the one pictured.

Cloth diapers come in many styles, sizes, and at various stages for babies. 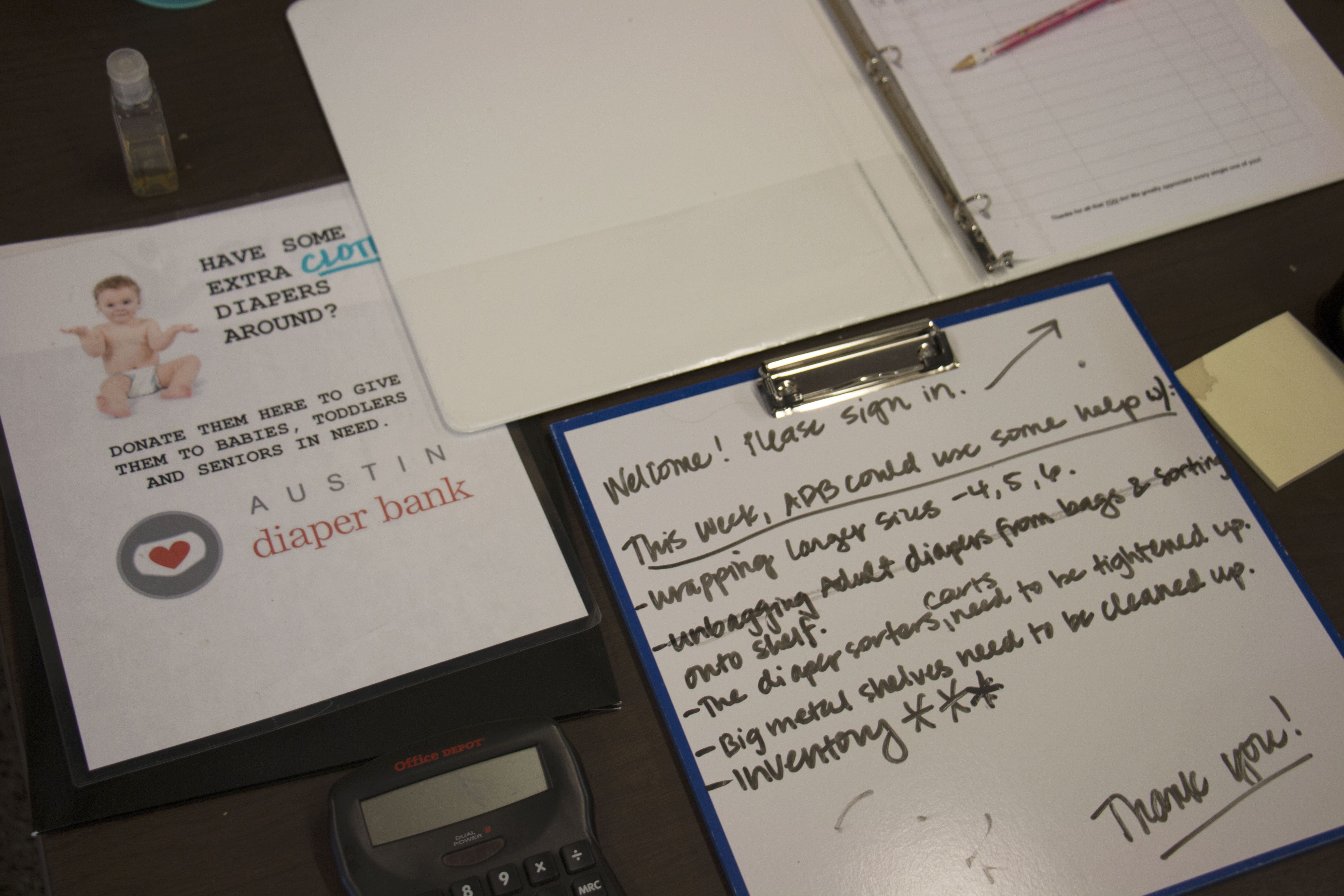 At the Austin Diaper Bank, volunteers can help pack diapers and sign up for other duties. 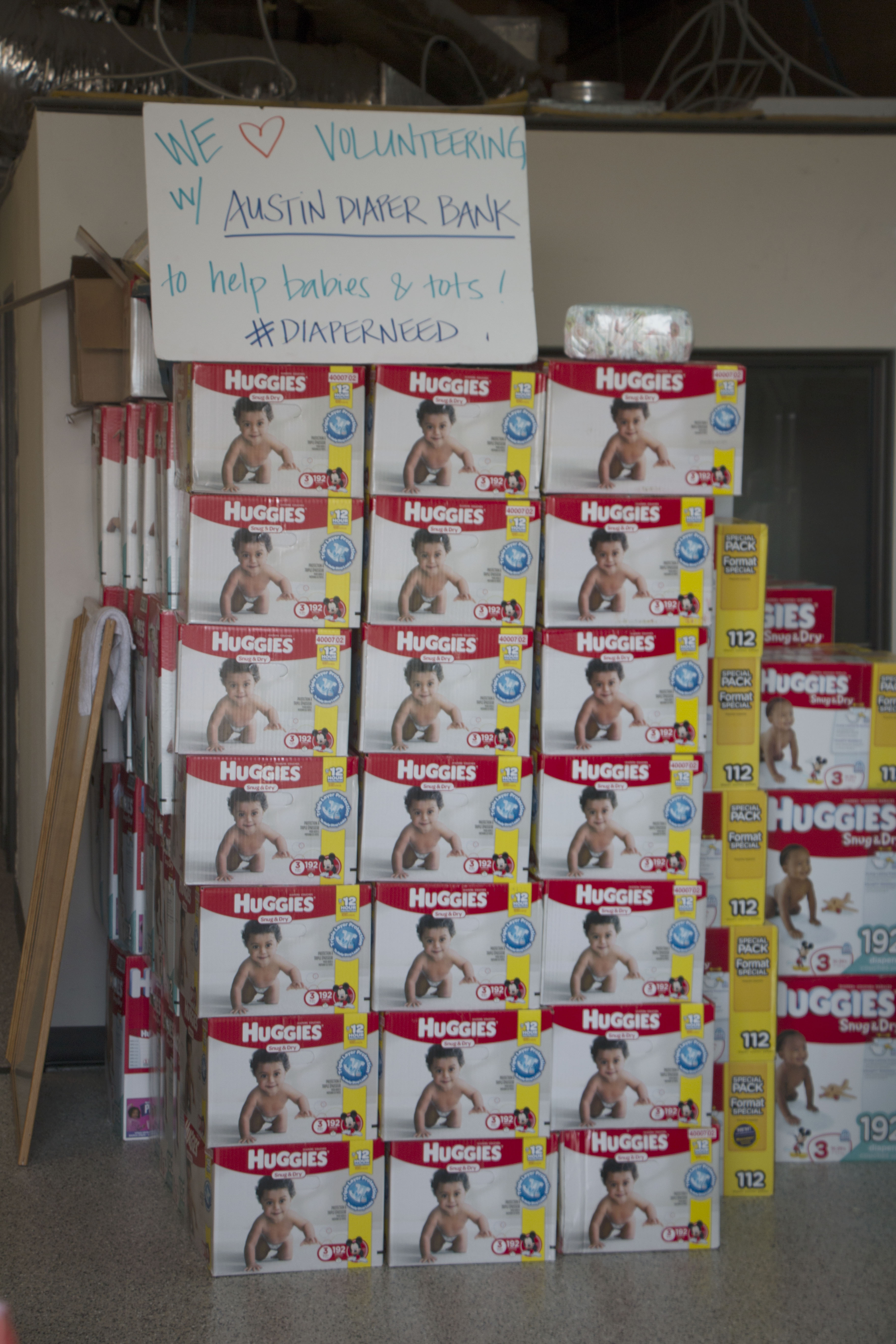 Boxes of Huggies diapers sit at the Austin Diaper Bank, with a sign emphasizing the diaper need in the area. 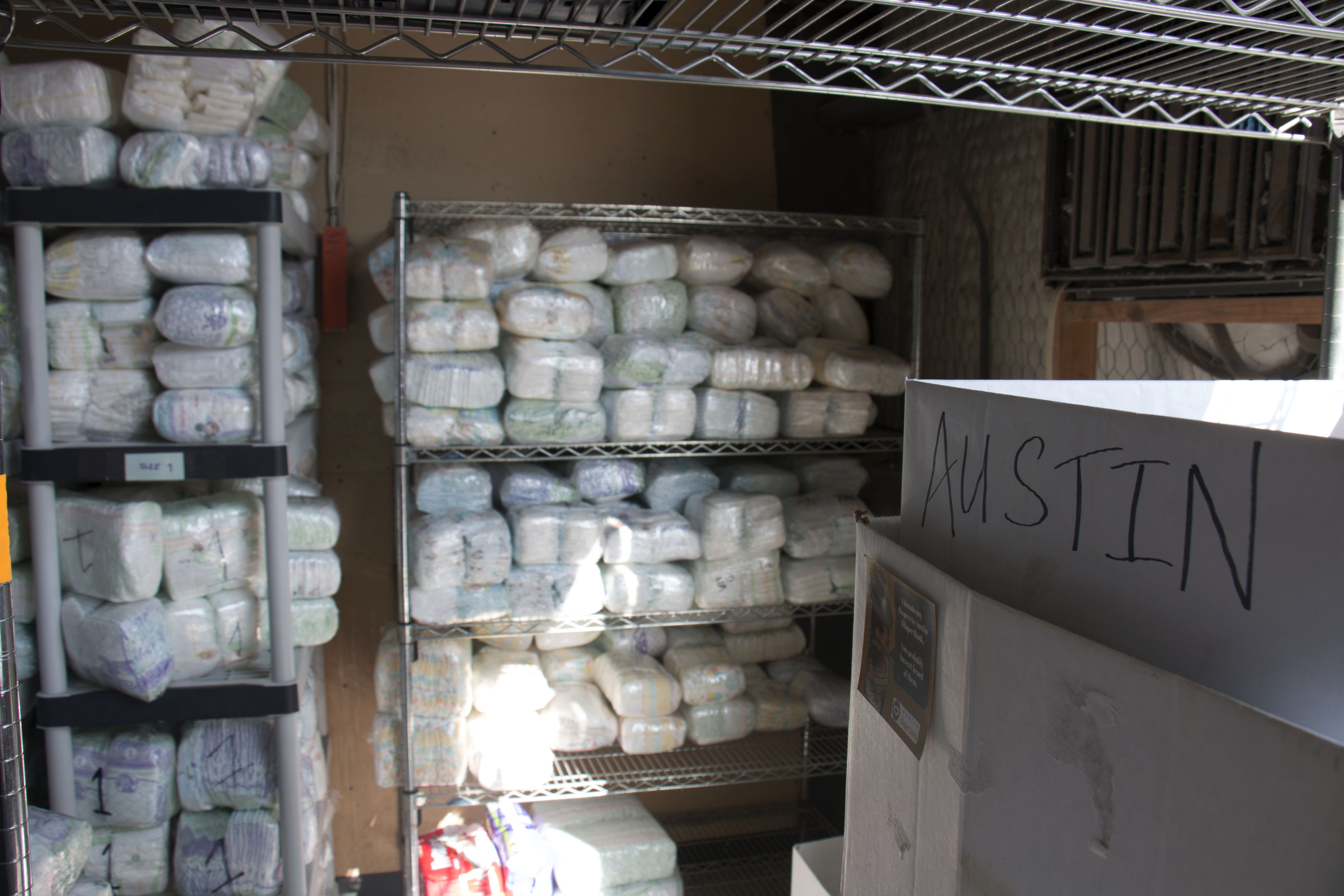 Diapers line the shelves of the Austin Diaper Bank, waiting to be packed, sorted, and ultimately shipped out. 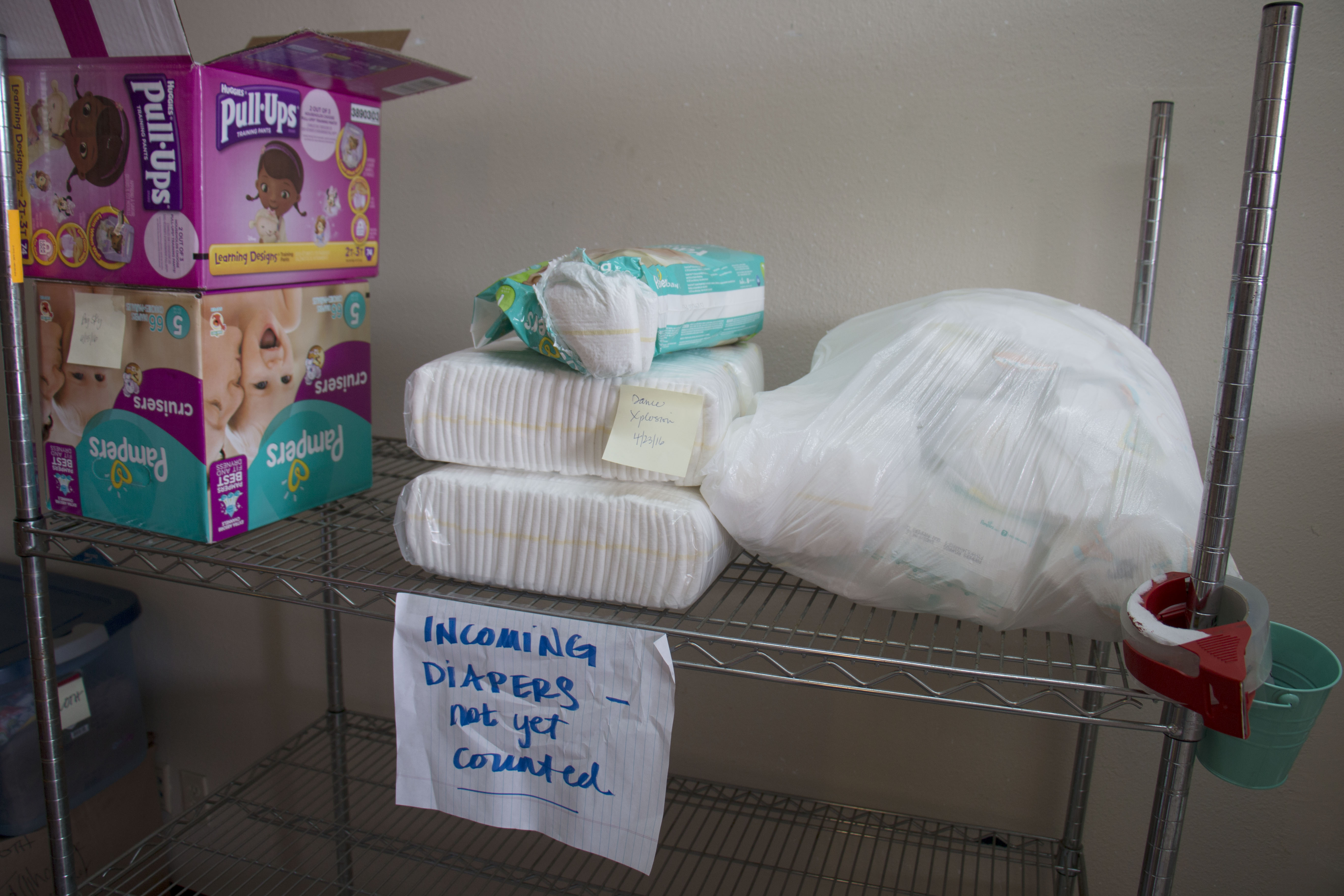 Several packages of diapers wait to be counted and packed at the Austin Diaper Bank. 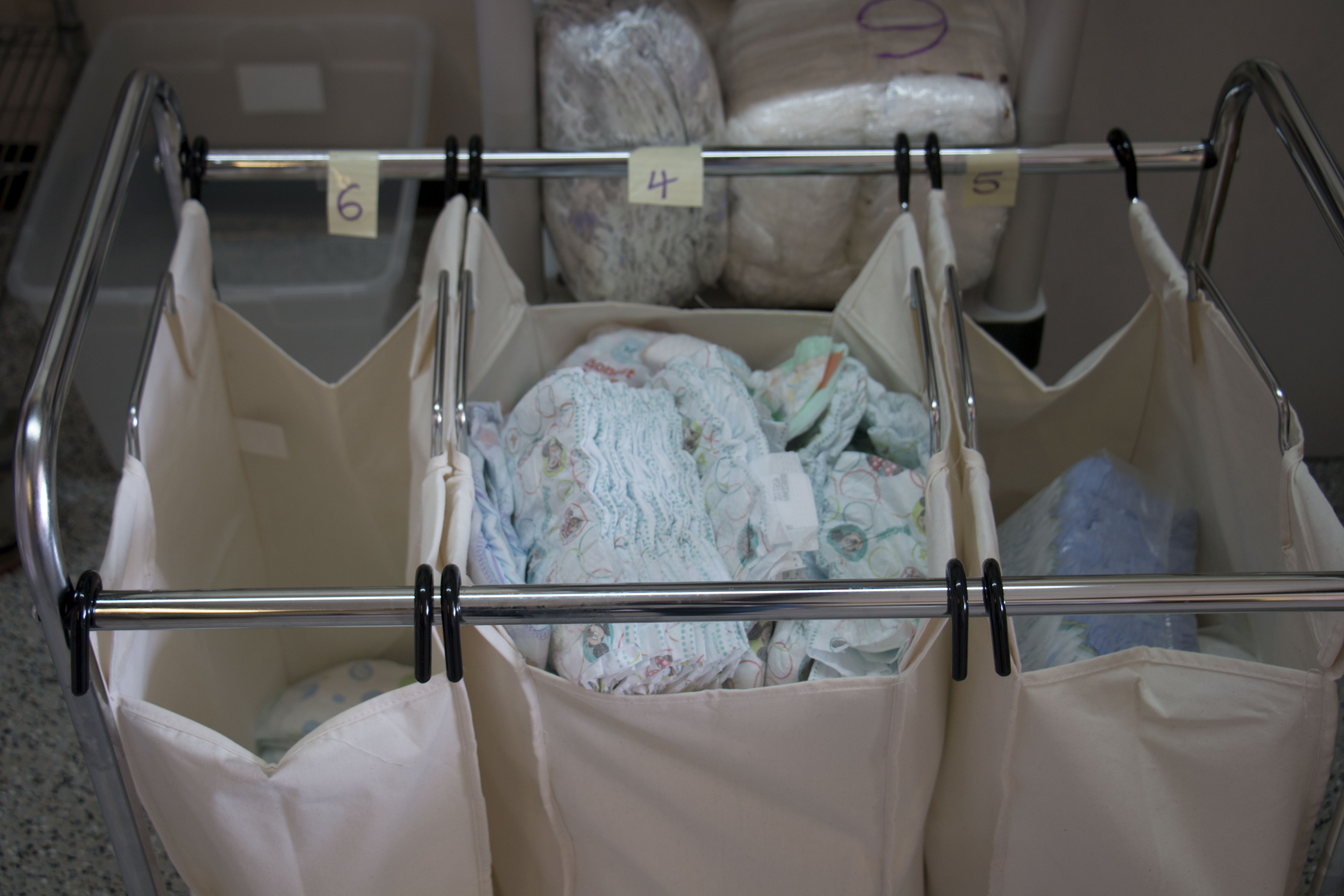 Once diapers have arrived at the Austin Diaper Bank, volunteers and organizers help sort through them. 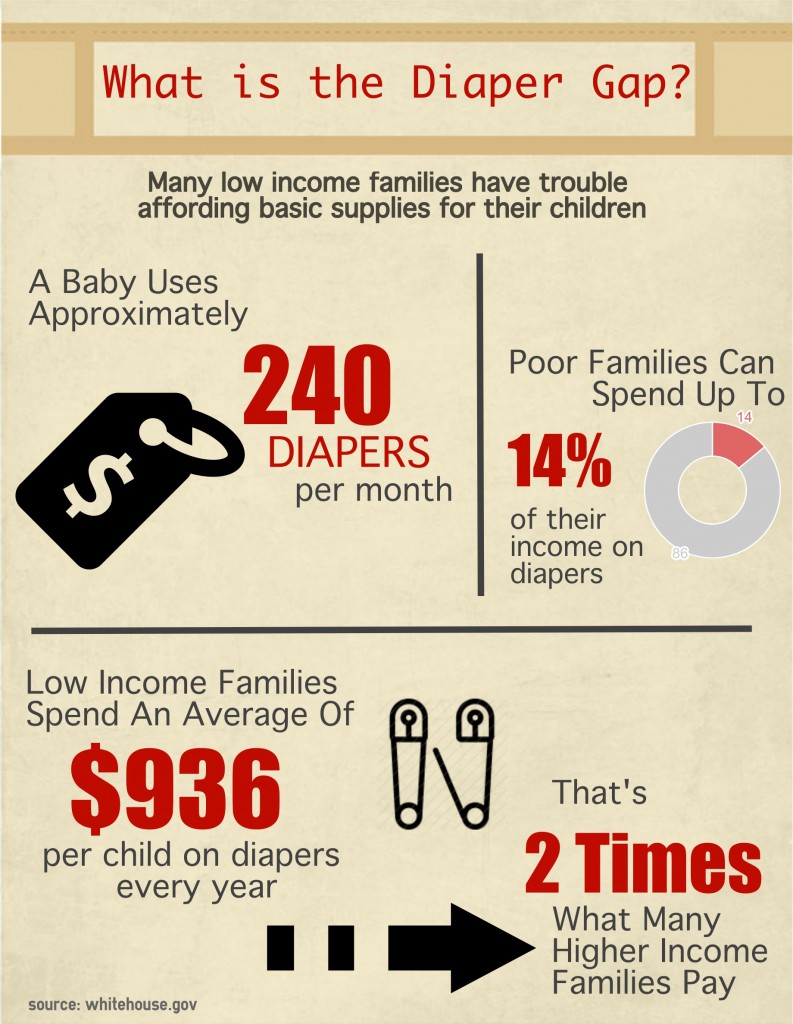 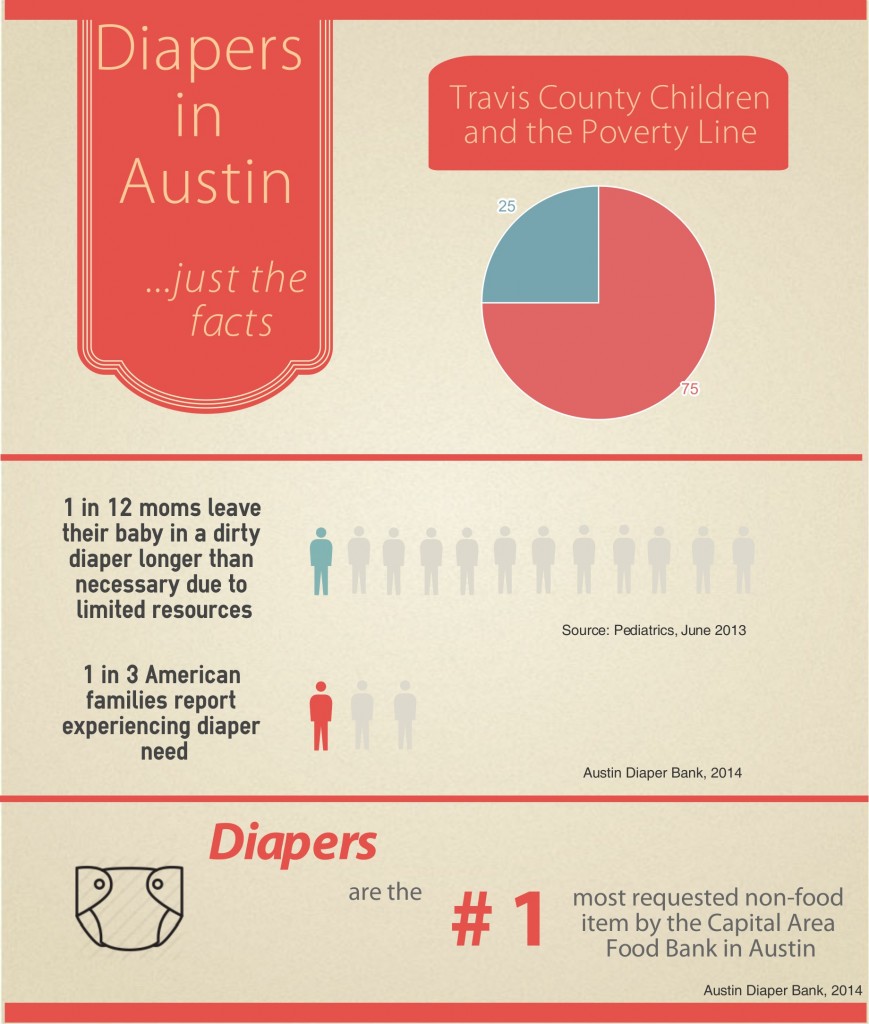 All Infographics by Ashlyn Warblow