The aromas of smelly crawfish and cheap beer wafted through the air, mixing with the sounds of country music and the lighthearted chatter of the hundreds of University of Texas students gathered at the Sigma Chi fraternity house in final celebration of Derby Days, a weeklong event that culminated in $31,000 raised for charity.

“It’s important for the Greek community to participate in philanthropy because with so many people and resources, we can really make a difference,” Tim Davis, the Derby Days Chairman, said.

Derby Days, which concluded festivities on April 23, is only one of a multitude of philanthropy events held annually at the University of Texas and put on by UT Greek organizations. There are 14 official sororities at UT, governed by the University Panhellenic Council, or UPC, and 28 official fraternities, governed by the Interfraternity Council, or IFC. Individually, these 42 Greek organizations hold various philanthropy events throughout the year, raising a combined hundreds of thousands of dollars for charity.

“In 2015 alone, all 14 sororities combined within UPC raised over $647,000 for their charities of choice,” McKenna Phillips, the UPC Vice President, said. “ These charities include St. Jude Children’s Research Hospital, The Ronald McDonald House, and Prevent Child Abuse America, among others.”

Sororities raise money through events ranging from flag football tournaments to frozen yogurt profit shares. One popular event held year after year is Kappa Alpha Theta’s “Pancake Party.” Hosted at the Theta house, students line up for all you can eat sweet and savory pancakes, including flavors like sausage and Oreo, and the proceeds are donated to Theta’s philanthropy, Court Appointed Special Advocates, or CASA, which advocates for abused and neglected children in the legal system.

“Pancake Party is our most attended philanthropy event,” said Emily Johnson, a senior Theta. “It’s great because through events like this, we have the opportunity to impact the lives of people we’ve never met.”
Fraternities also do their part to give back. So far in 2016, the IFC has already raised $95,444 for the B+ Foundation.

In addition to fundraising events, the Greek community also plays an active role in volunteering with their specific charities.

“Aside from financial contributions, chapter members participate in a variety of volunteering efforts towards their charities, ranging from helping out with local Austin schools to working on national philanthropic endeavors,” Philips said.  Through these various events and contributions, the UT Greek community is able to use their resources to impact the Austin area and beyond.

“Philanthropy allows the Greek community to come together for the betterment of the community,” freshman Tri Delta member Megan Uhr said. “It has made my Greek experience such a positive one.” 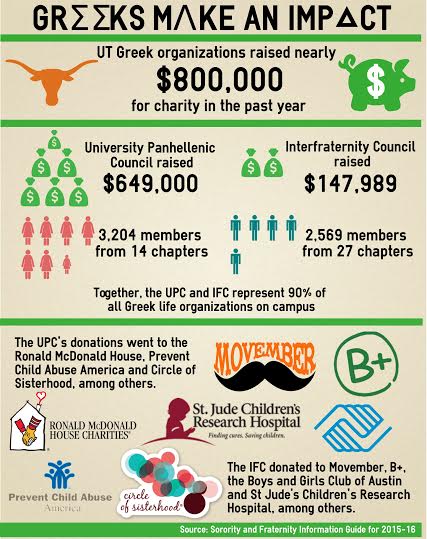 ← A Room Of Their Own
At Wishes and Dishes, Hope is Served →