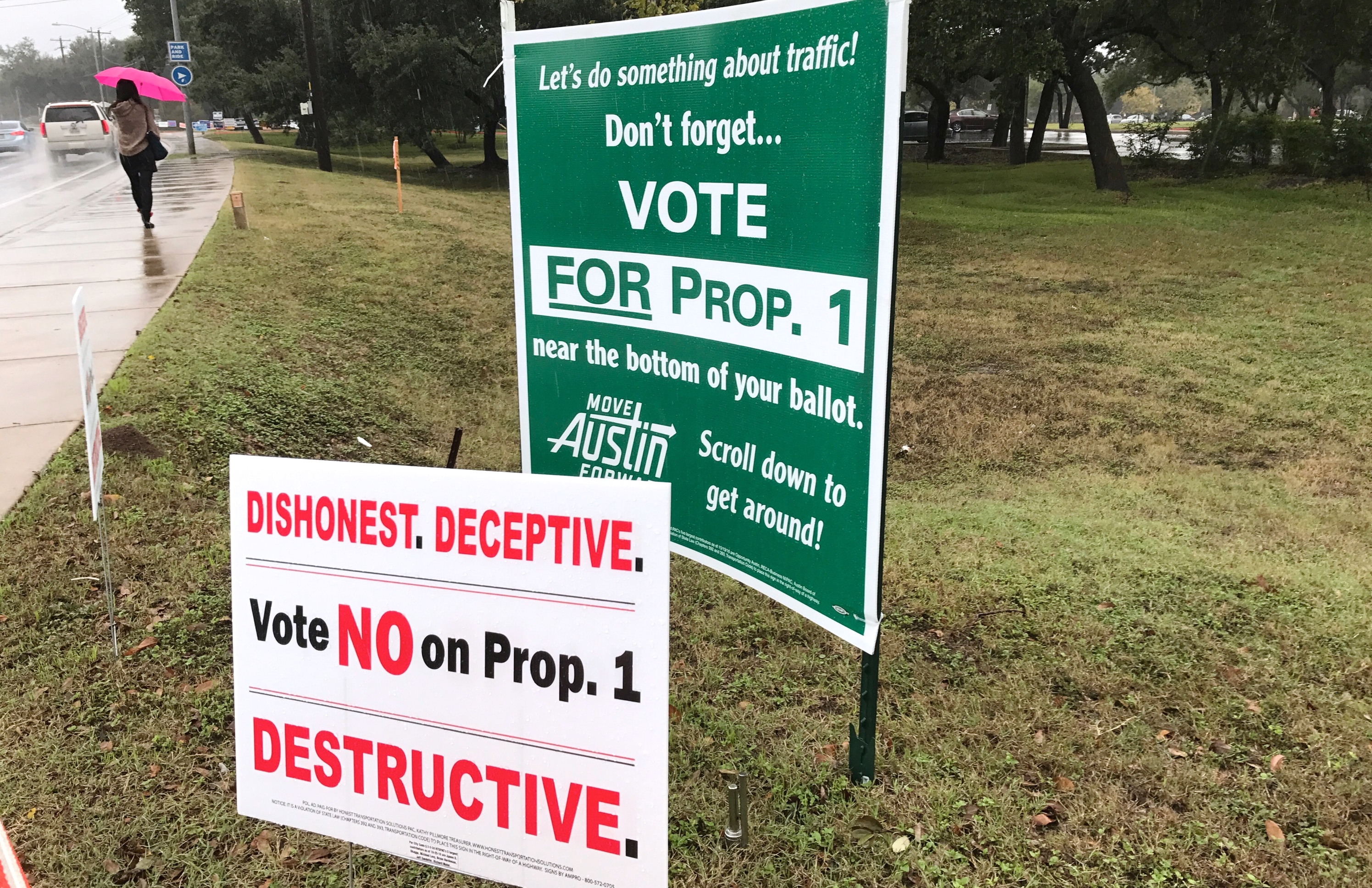 At least one election went as expected on Tuesday night.

Austin voters passed Proposition 1 on Tuesday night with 59.6 percent voting in favor of the $720 million bond package that aims to improve traffic on several city streets as well as add bike lanes and safe routes to schools.

Opponents of the Proposition cited its vagueness and claimed that costs would far exceed $720 million.

“Prop 1 is half their plan” Linda Curtis, Director of Independent Texas said. “The real plan is going to cost 1.8 billion.”

Sarah Behunek of the Austin City Planning Department confirmed that completion of all of the city’s proposed plans for the roads and corridors would cost about 1.5 billion. But she described the Proposition as “a starting place for the city.”

Suspicion aimed at the city government was the hallmark of the anti-Prop. 1 campaign. All over the city signs could be found that loudly read “Prop. 1: 720 million. Deceptive. Lie.”  This mistrust of local politicians was essentially a microcosm of the national campaign with both sides feeling intensely divided and angry at one another.

“Stop clubbing homeowners every year with property tax hikes,” Austin resident Josh Atkins wrote on the pro-Prop. 1 Move Austin Forward Facebook page. “It’s bad enough our taxes go up as much as they do and you’ve priced half the families on the Eastside with hipster bars and apartments. We paid for your stupid hospital (That UT should have paid for) with our blood, sweat and tears, and now you want more. Take, take, take.”

The anger that Mr. Atkins expresses at City Hall is not dissimilar from the feelings expressed by Donald Trump’s supporters or the sentiments of the majority of the English populace who voted to leave the European Union earlier this year. People feel like their leaders are liars and the pinch that many are feeling is due to them being “priced out” of the new economy.

On the other side is Anthony Murray. He can see why some have qualms with giving the City Council $720 million to spend, but it is a cost he views as ultimately worth it.

“I feel it is important to get things done that the public doesn’t want to do [sometimes],” Murray said. “For example the public wants to add more lanes for personal vehicles but we know that wouldn’t help congestion. So you can’t always let the public decide what’s best for them, so I understand the reasoning about why you would want to package things that people want with a couple of things that they would never support.”

Murray also notes that the campaign on social media has become particularly insult-laden.

“I mean I’ve seen the responses on social media and it is just bashing on cyclists and walkers and it’s all of these people saying we need more for cars,” Murray said. “They aren’t realizing that they are the problem and it’s not the bikers or the walkers. It’s all these people who are driving cars.”

This resentment of the other felt by both sides spilled over into real-life destruction, as several local businesses woke up on Sunday to find their shop windows broken and their anti-Prop. 1 signs damaged or stolen according to KVUE.

Ashley Schor the owner of a jewelry store called Bead-It located on South Lamar was one of the business owners who saw her shop vandalized. She said it wouldn’t affect her opinion on Prop. 1.

“Are we really at a point in Austin where we have to feel nervous about talking about a proposition, about a bond!” Schor said. “That I have to walk into my store and erase my Sunday and deal with broken glass and danger on my front porch?”

It is clear that 2016 has been fundamentally different from most election years. Everything that was known about politics has been challenged and has left the so-called experts confused at every turn. Deep social divisions combined with anger at economic stagnation leaves America’s sense of decency frayed and its decorum broken.

Proposition 1 in many ways paralleled the national election and left many Austinites with a deep sense of distrust for the city government even after the final vote was tallied.

Despite the broken glass and hurt feelings Prop. 1 is now a reality.

← Under the Lights: Reagan Football Academy’s Quest for Greatness
Campus Safety at UT →