Swingin’ to the Beat 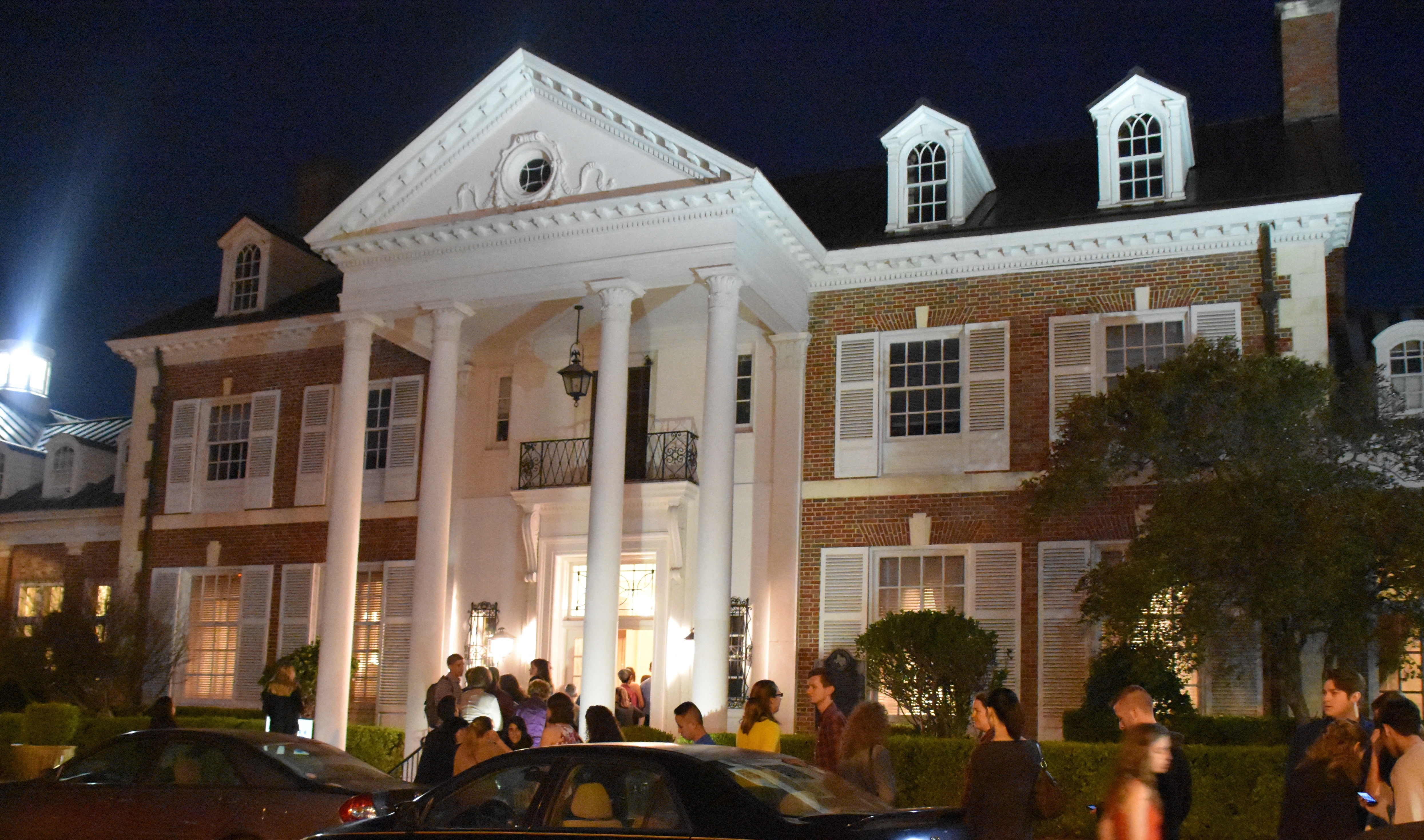 Every Thursday night, hundreds of people line up to attend the open swing dancing event at the Federation of Women. 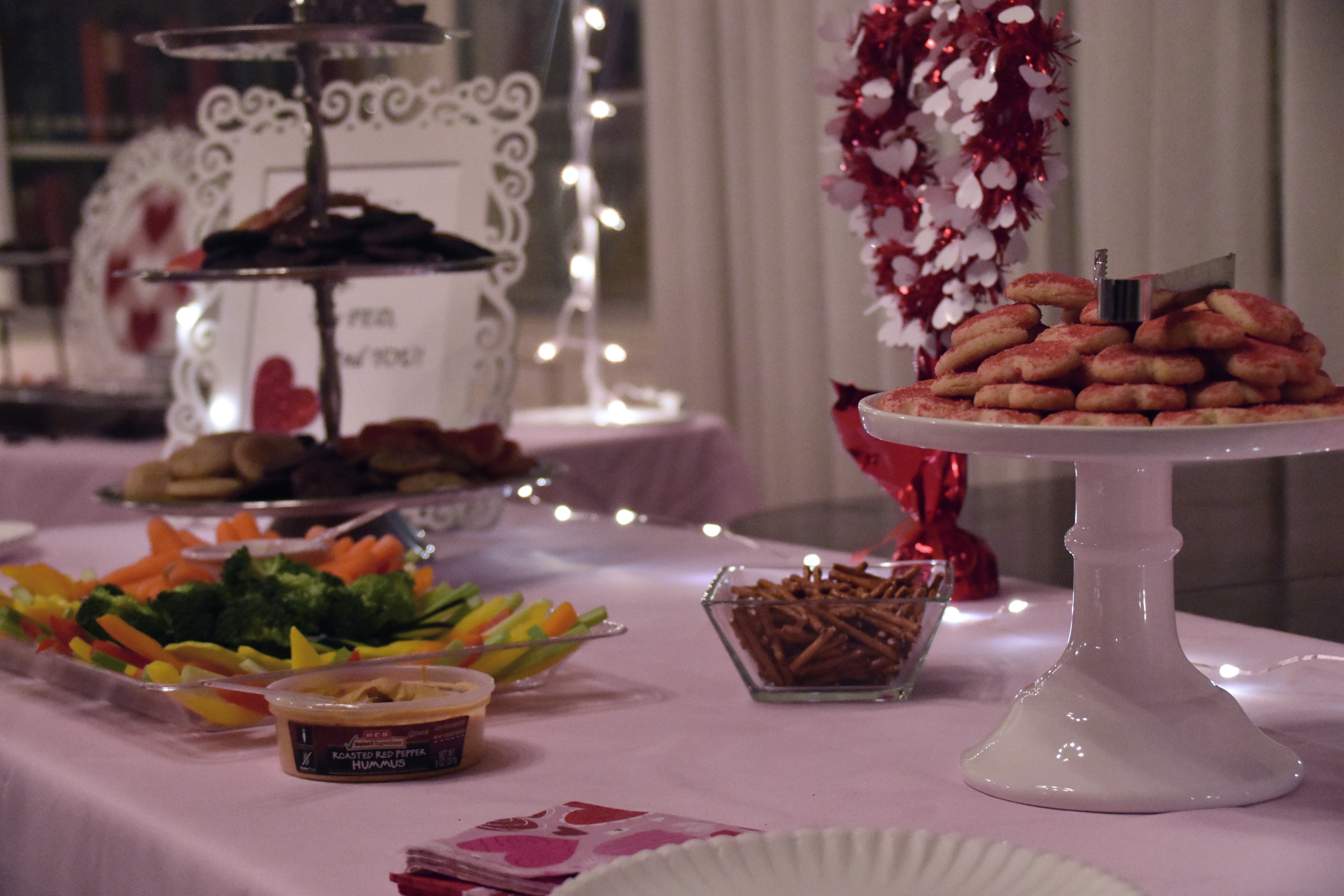 Snacks are always provided, but beware! They go quickly. 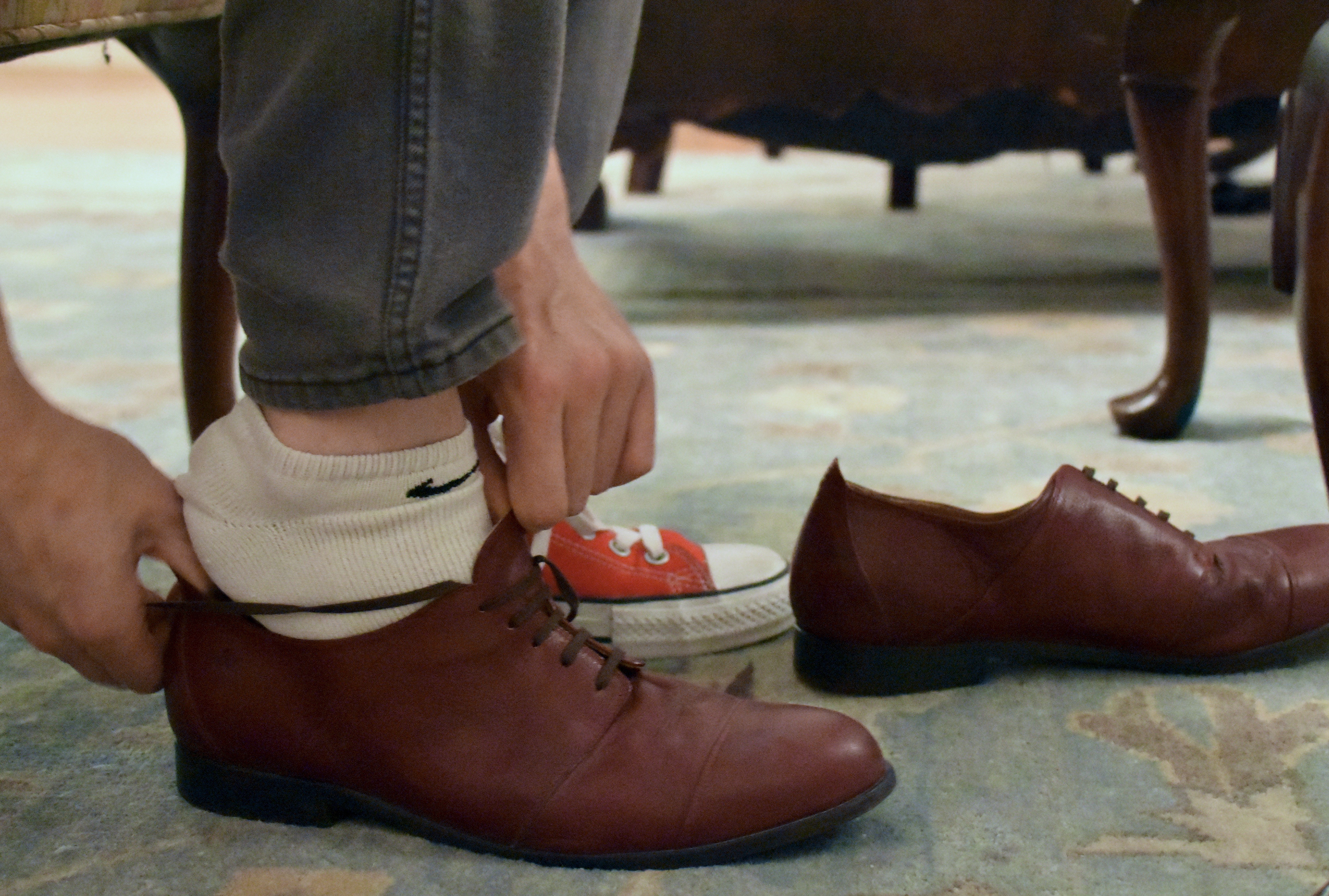 Some of the more experienced swing dancers like to order their shoes from shoemakers in Spain. 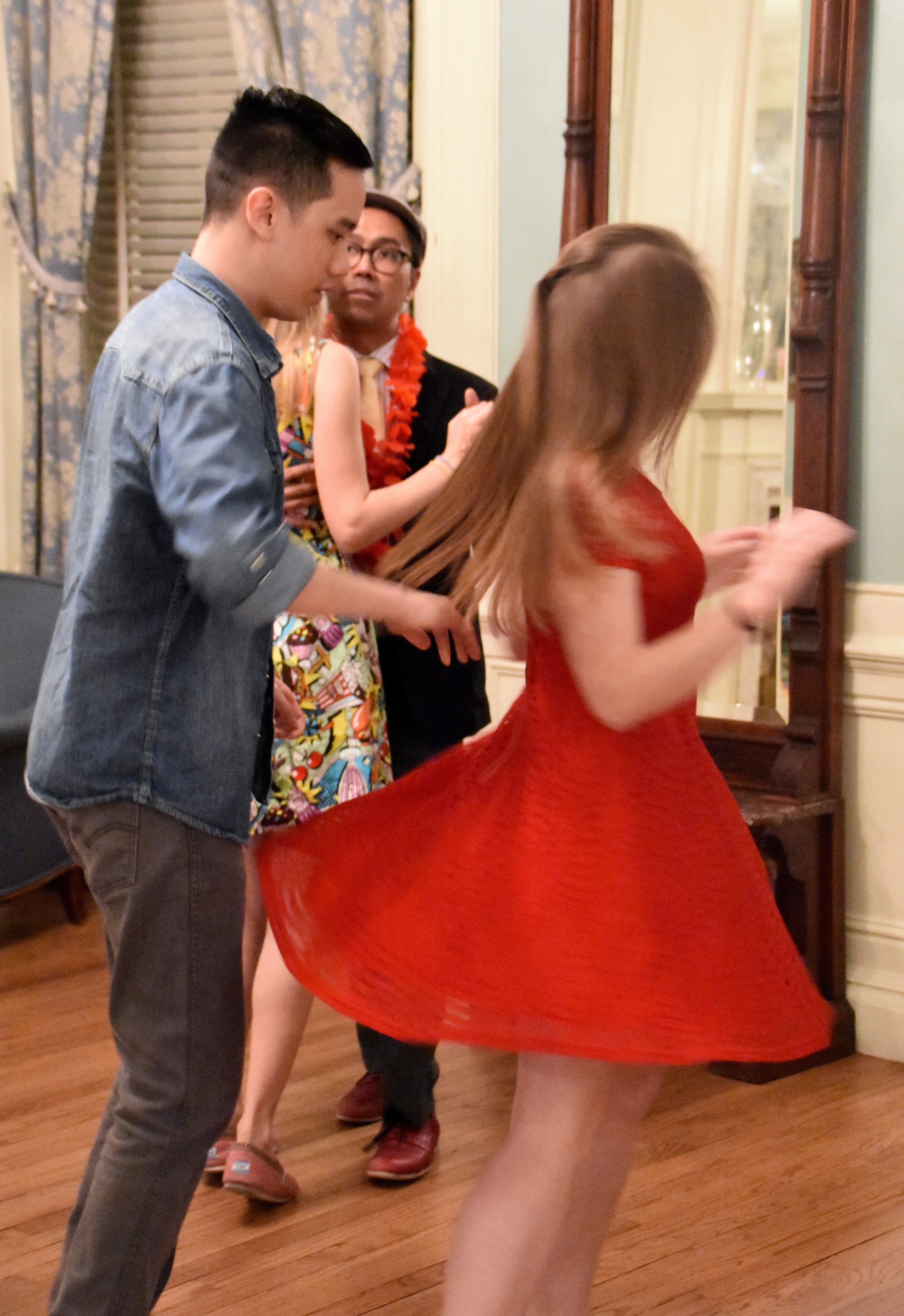 Kenny and Alexa enjoy coming here with their friends. They all practice together before the dance starts to warm up. 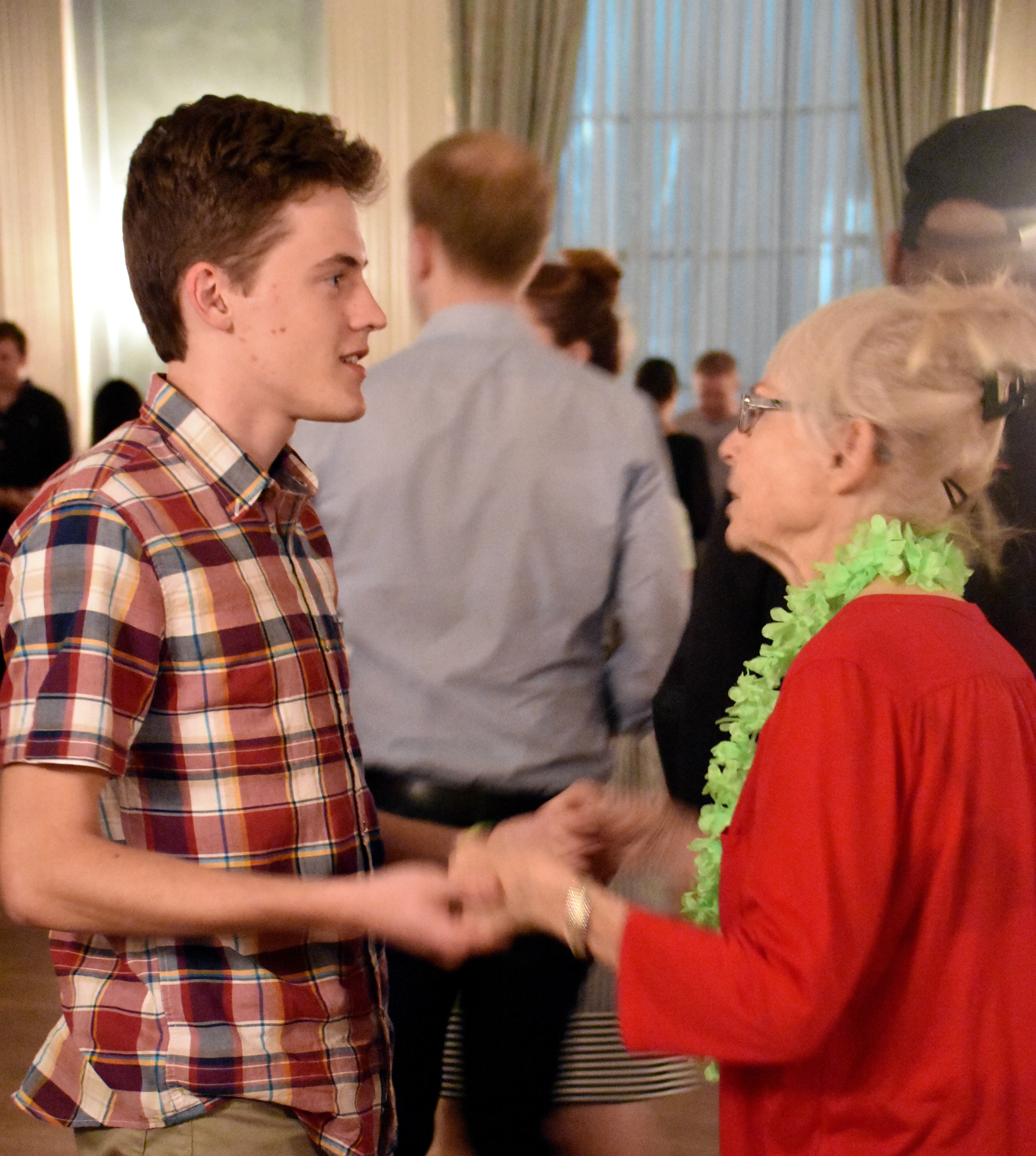 Swing dancing is for people of all ages—just look at Josh Stewart and Muriel Hayden. Though they didn’t know each other before, they became fast friends dancing on Thursdays at the Fed. 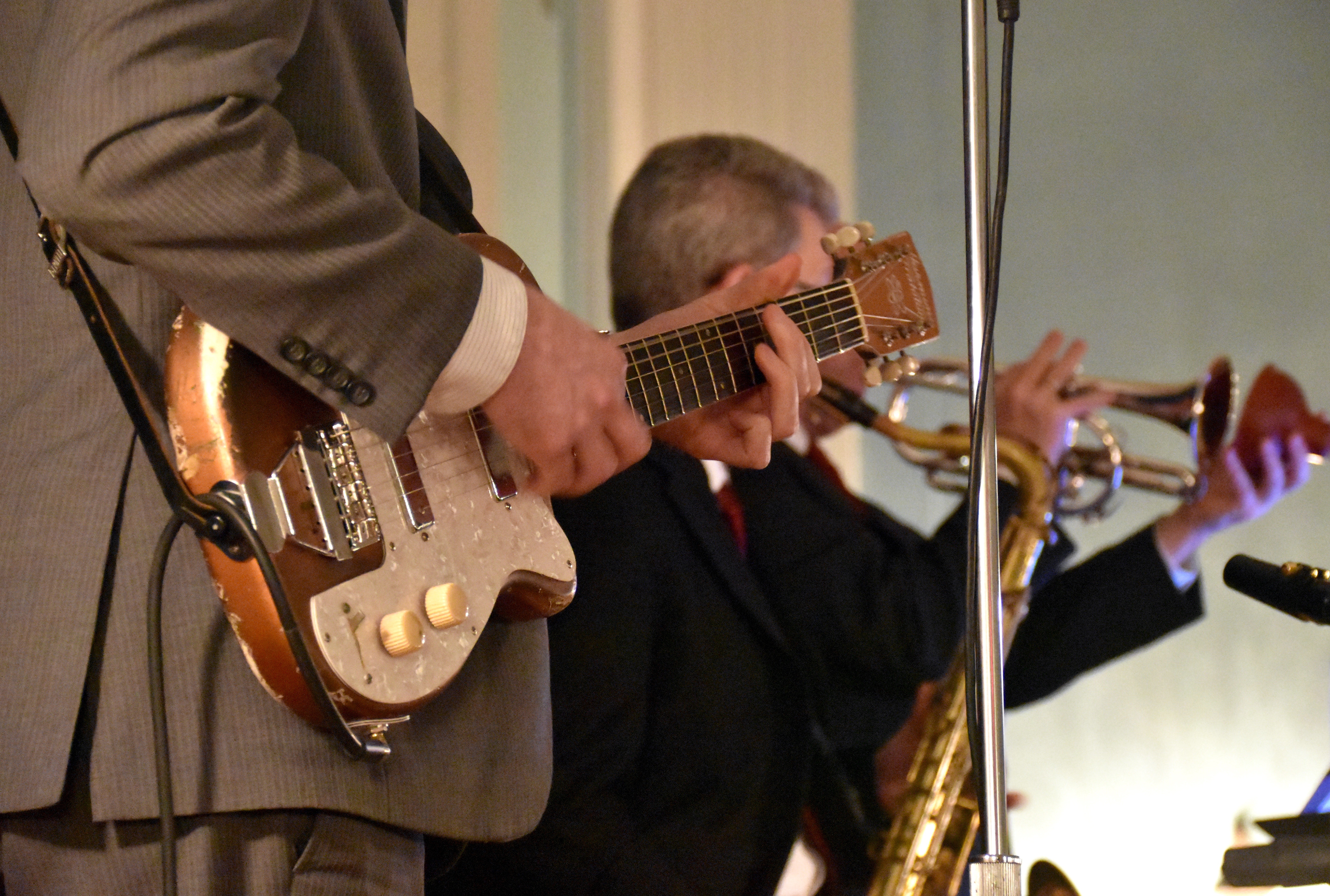 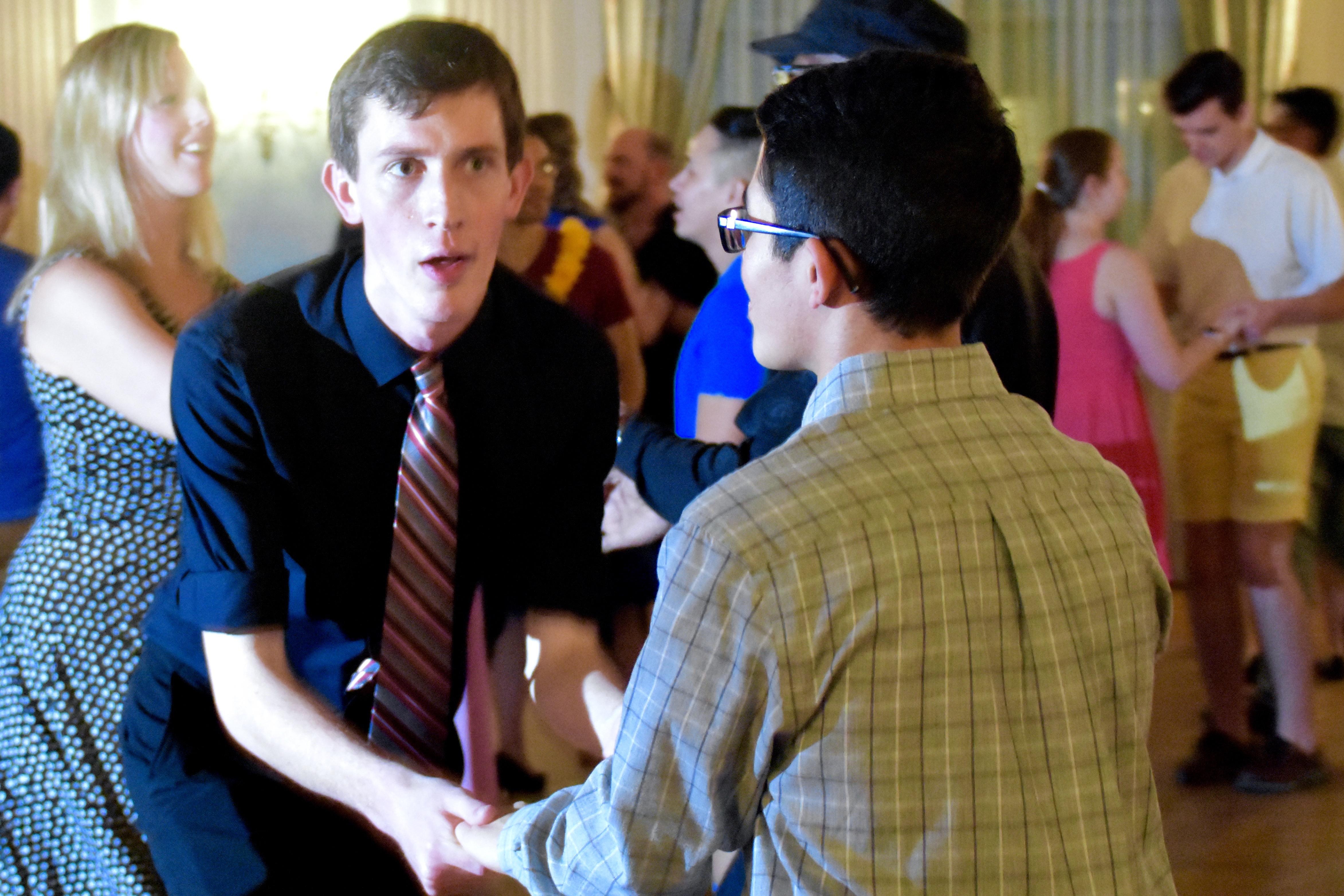 James (left) comes to the Fed every week. He tried to make his friend Kenny (right) feel more comfortable by getting him out on the dance floor. 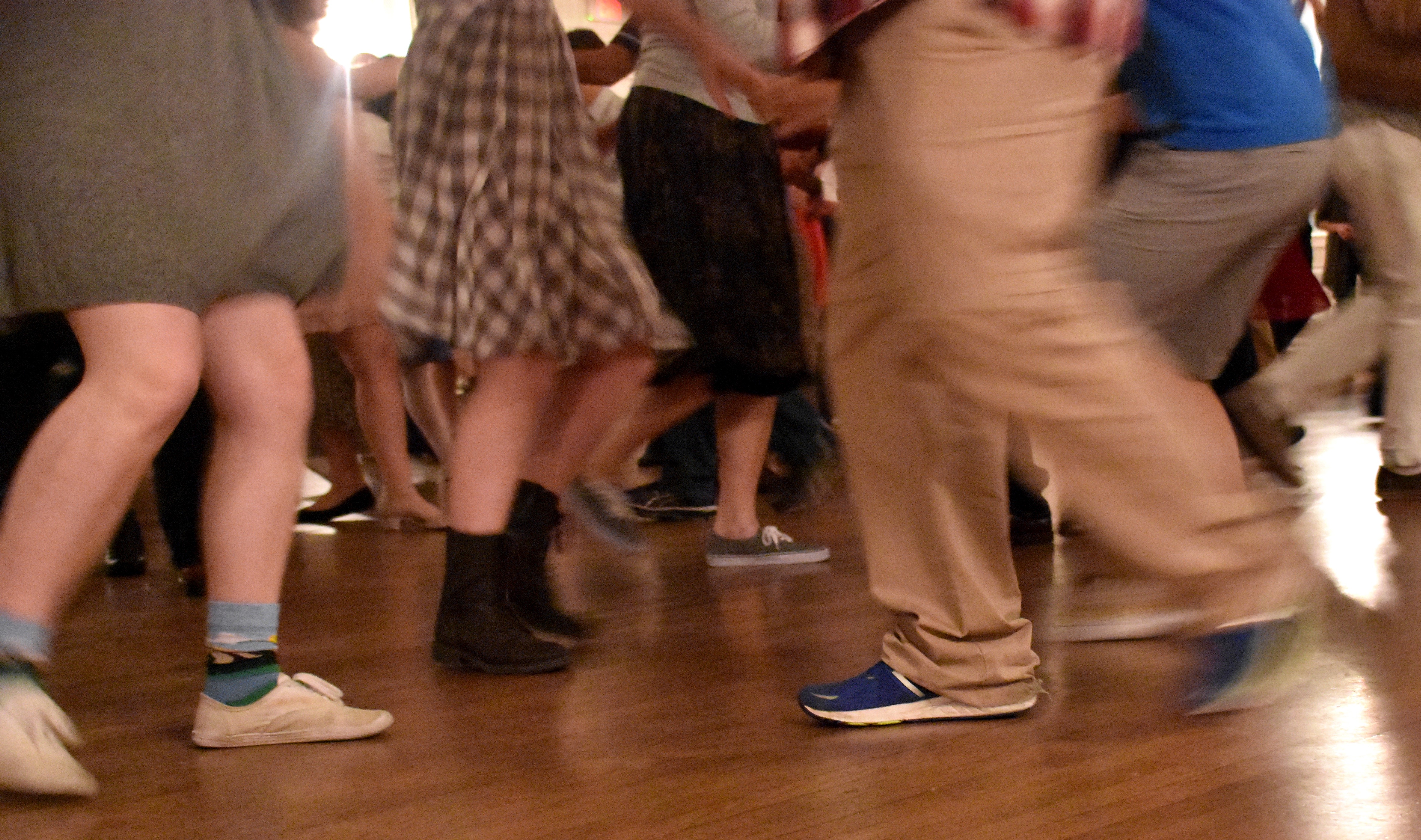 According to some of the participants, the beauty of swing dancing is that its lively and active. 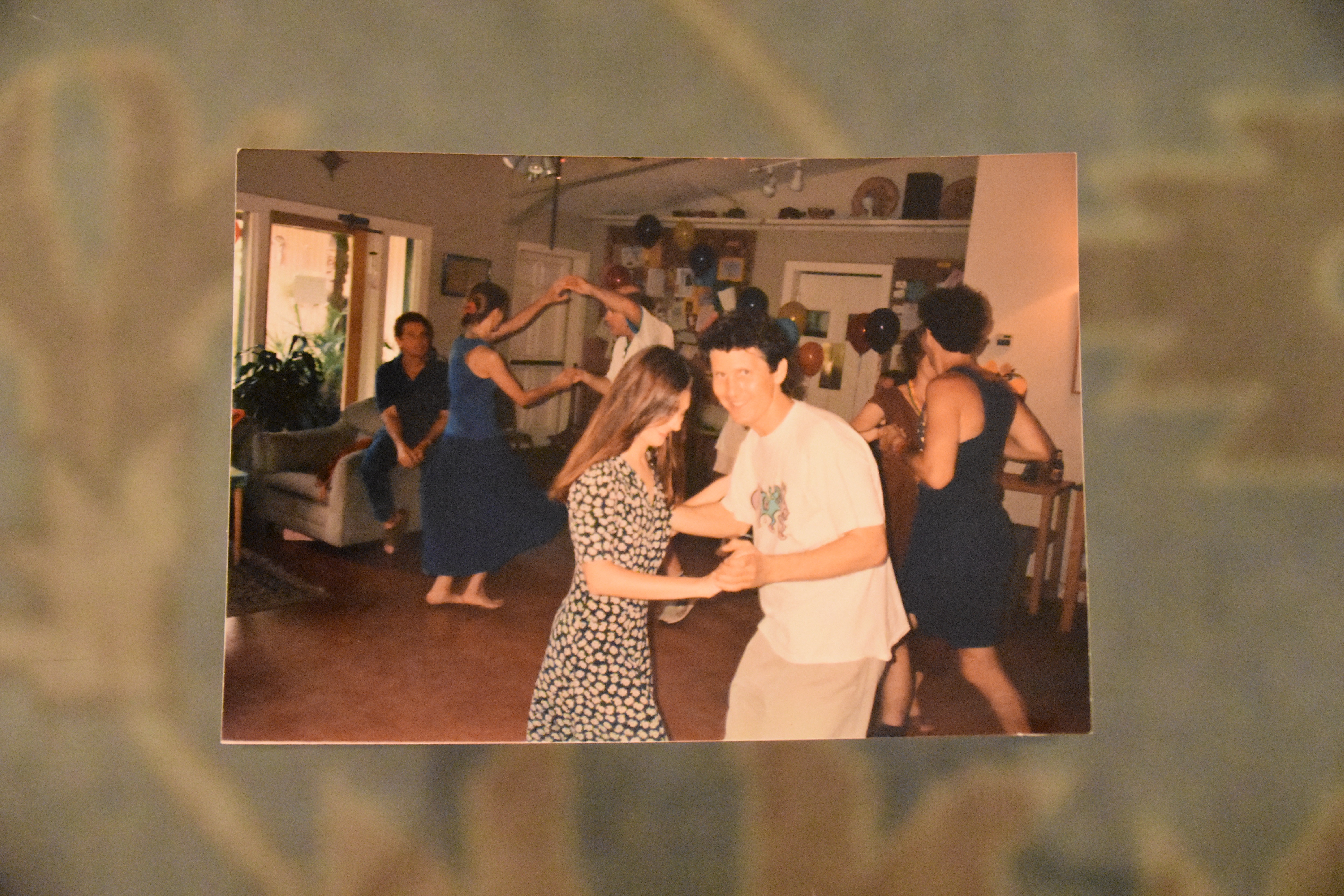 Dan and Stephanie Porter met started their relationship through dancing, and have been dancing together for the last 23 years. 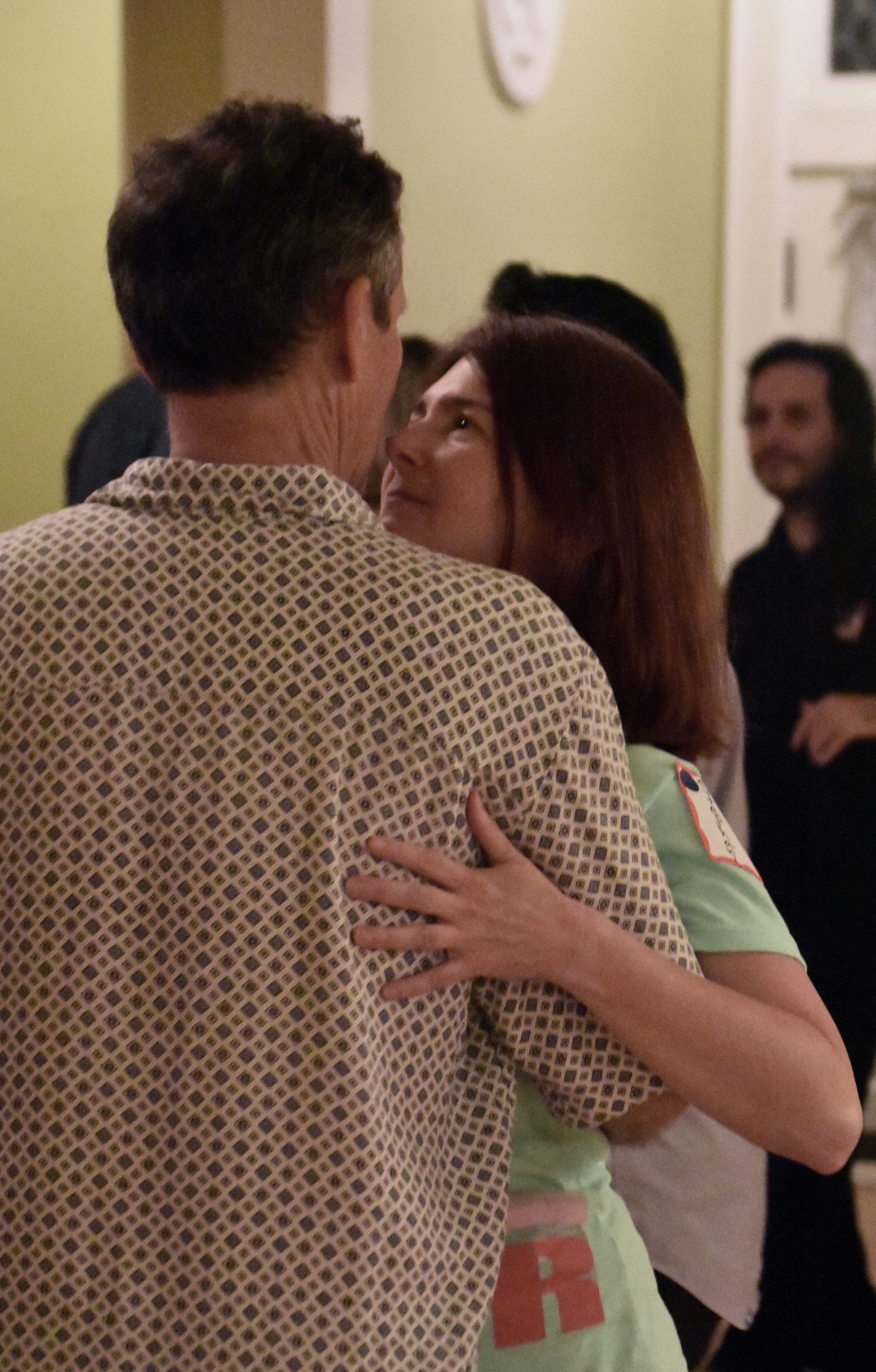 Within the last couple of years, the Porters have taken to swing dancing at the Fed. They say it’s a nice change of pace from other styles of dancing. 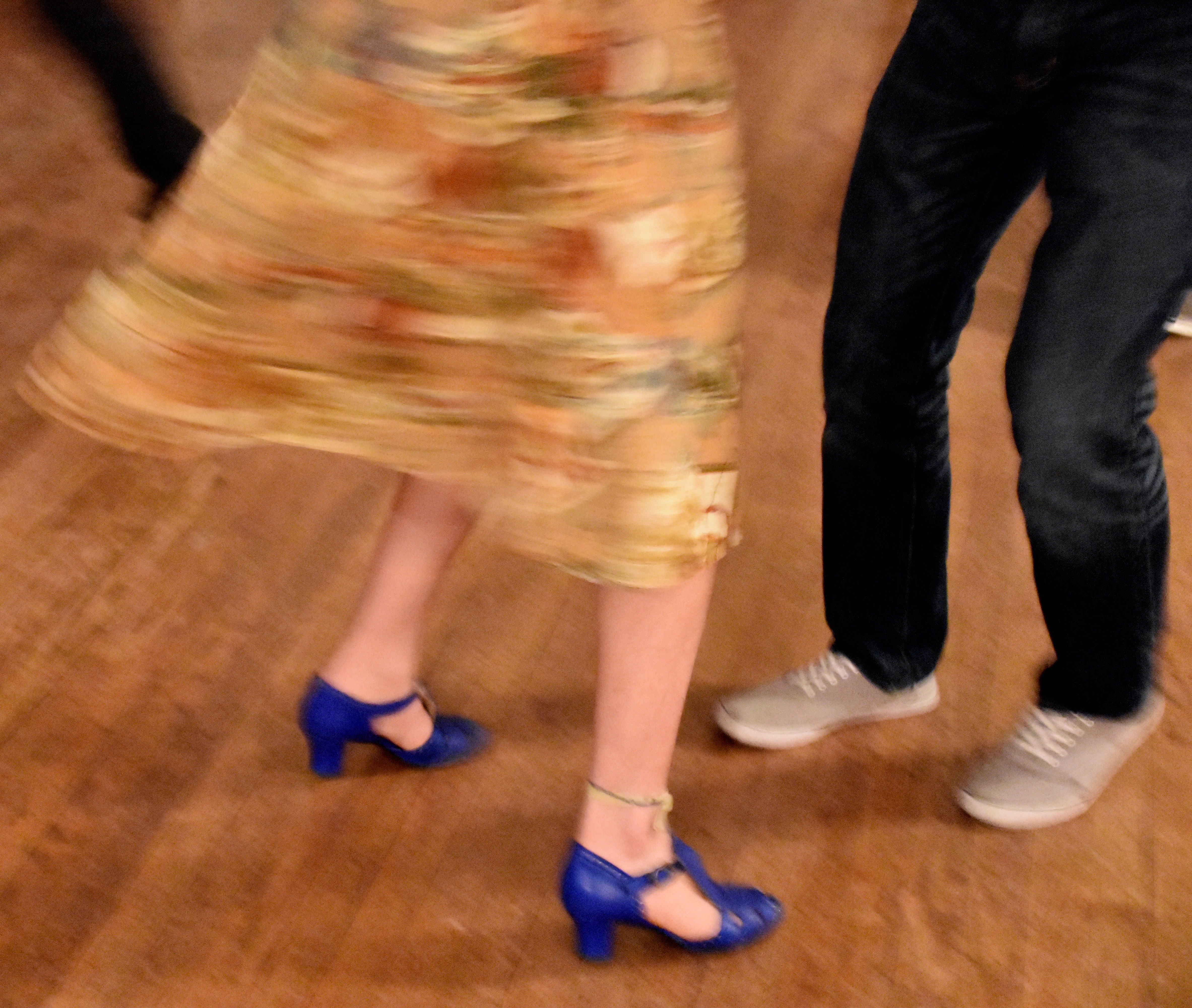 Swing dancers love to go all out when dressing for the night, wearing fun swing shoes and dresses that twirl with them. 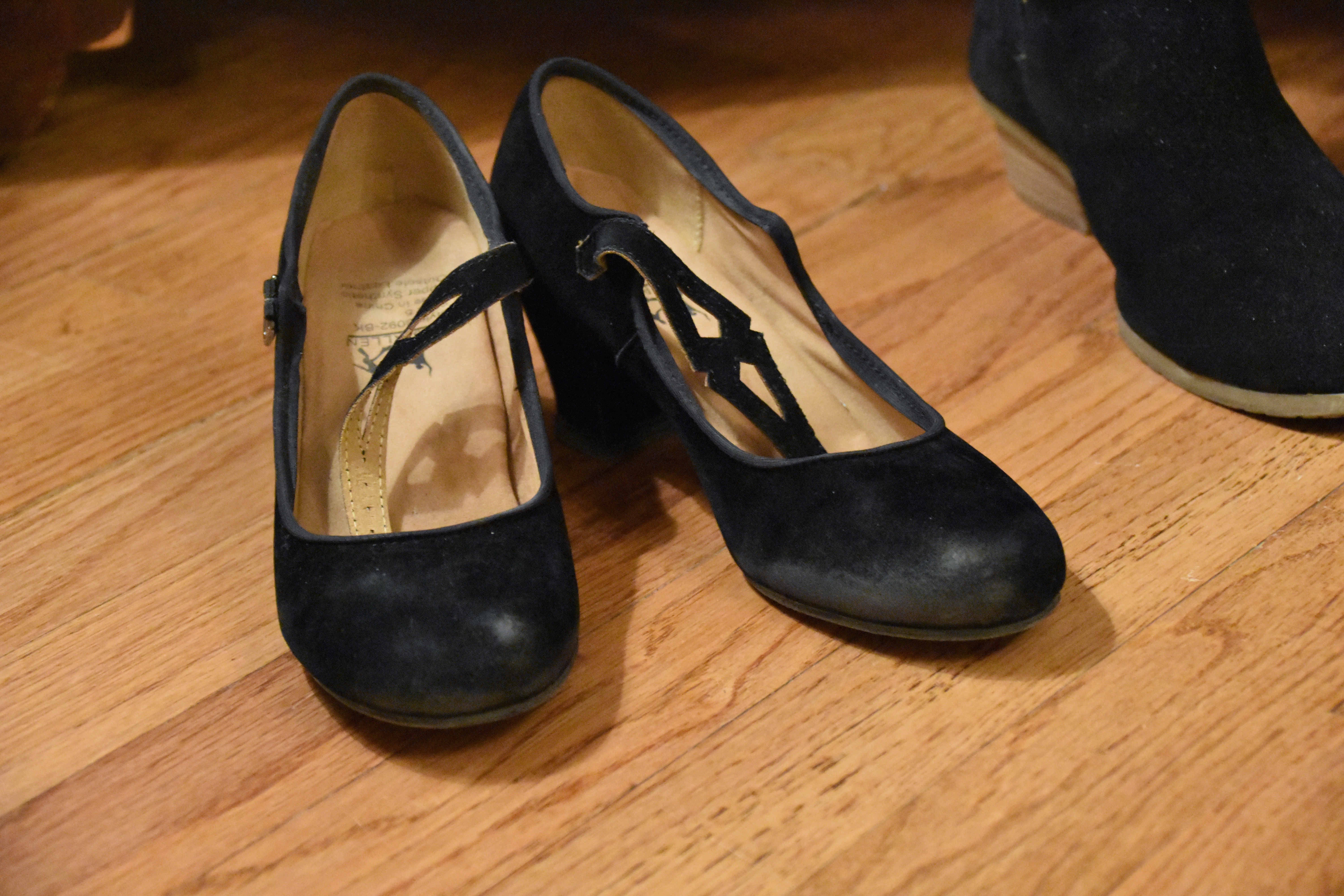 Stephanie says she owns lots of different swing shoes of all different colors. 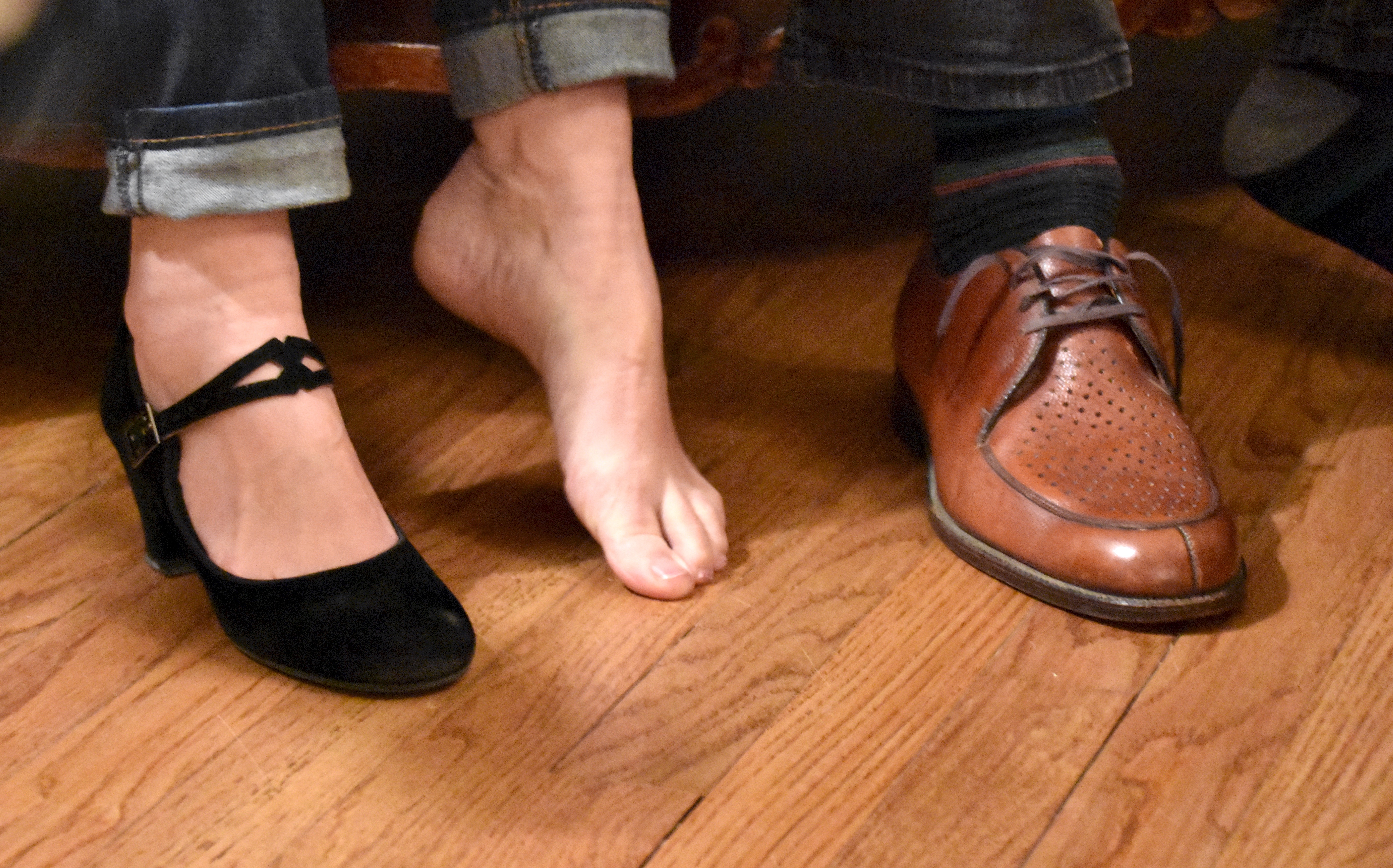 Dan says you don’t have to buy fancy shoes from another country—the key to a good swing shoe is a smooth leather sole.

Though you switch partners a lot in swing dancing, Stephanie says her favorite partner is Dan.

Every Tuesday night, they climb the steps up to a Georgian style mansion with brown brick and white doors. The latch on the door is slightly heavy, and opens with a push. Once inside, they change into shoes with will ease their feet onto the dance floor.

Stephanie and Dan Procter have been attending swing classes at the Texas Federation of Women’s Club commonly called, “The Fed”, for nearly two years now. But, they have been dancing for much, much longer.

The couple first met in 1992 at Ruby’s BBQ when Dan showed up to listen to a live Cajun band.

“And I was there, pretty much minding my own business, this really cute dark-haired girl came up and asked, ‘Will you waltz with me?’” he said.

After the dance, Dan thought his dance partner was endearing, but was discouraged by her friend.

“She was with this guy who was real tall, who I assumed was her boyfriend,” Dan said.

“He wasn’t!” Stephanie chimed in.

After their first encounter, the two bumped into each other at local dance scenes. Even twenty years ago, dancing brought the couple closer together. And while Dan didn’t know much about Stephanie, he was determined to win ask her out on a date.

“They used to have these things called phone directories. They were big, thick books,” Dan said. “I didn’t get how she spelled her [last] name, so I spent a couple of hours flipping through the M’s.”

When Dan finally found Stephanie’s correct last name, he called her and asked her out. She agreed.  The two eventually married in 2009, and never left the dance floor.

With dancing styles like Zydeco and two-step on their plate, Dan said it was time for a change.

“After 20 years, you get tired of dancing backwards at the Broken Spoke,” he said referring to an Austin honky-tonk dance hall.

The couple landed inside the Fed on 2312 San Gabriel Street, where the Austin Swing Syndicate houses swing dancing. Thursday evenings feature beginner classes, while other days consist of specialized dancing for balboa, lindy, and shag.

Dan and Stephanie currently attend Sunday-through-Tuesday classes for balboa. Even though the couple does not consider themselves in the “cool” crowd because they are beginners, it’s an adventure for them where they are eager to learn.

“The steps are more complicated, and the rhythms are more varied,” Dan said. “I find it more challenging, although more fun.”

Stephanie enjoys the change in attire and culture.

“I got to buy a bunch of different shoes for this,” she says.

The shoes used in swing dancing have what Dan says is a “slidey” sole. He bought his from a local thrift store, and Stephanie has three pairs of shoes with small heels and straps around the ankles.

“It’s different from boots,” she added.

“Dancing with Stephanie,” he said looking at his 50-year-old wife.

“For me, he’s always been my favorite partner,” Stephanie said.

“You’re having a physical conversation, and it doesn’t have to be sexy. But it is a communication form,” she said.

Dan adds that there is no real age limit to dancing, as he is 63 years old. This is evident since every week at least 200 to 300 people attend the Fed for swing dancing. Middle-aged couples to pre-teenagers come through the door, some regulars, others first-timers.

The Procters’ advice for those wanting to join is to ignore what others might think.

“Realize that nobody is really watching you.  And if you’re a beginner, they’re going to recognize that, and they’re not gonna judge you for it,” Dan said.

Dan said that ultimately, perseverance is needed to have a good time.

“There is bit of a wall you have to push through, and that’s what we’re doing right now with swing.”

Tags: portfolio, UTjournalism
← Austin making a name for itself in craft beer scene
The End of “Wet Foot, Dry Foot” →