For those with mental illnesses, health care is not always within reach 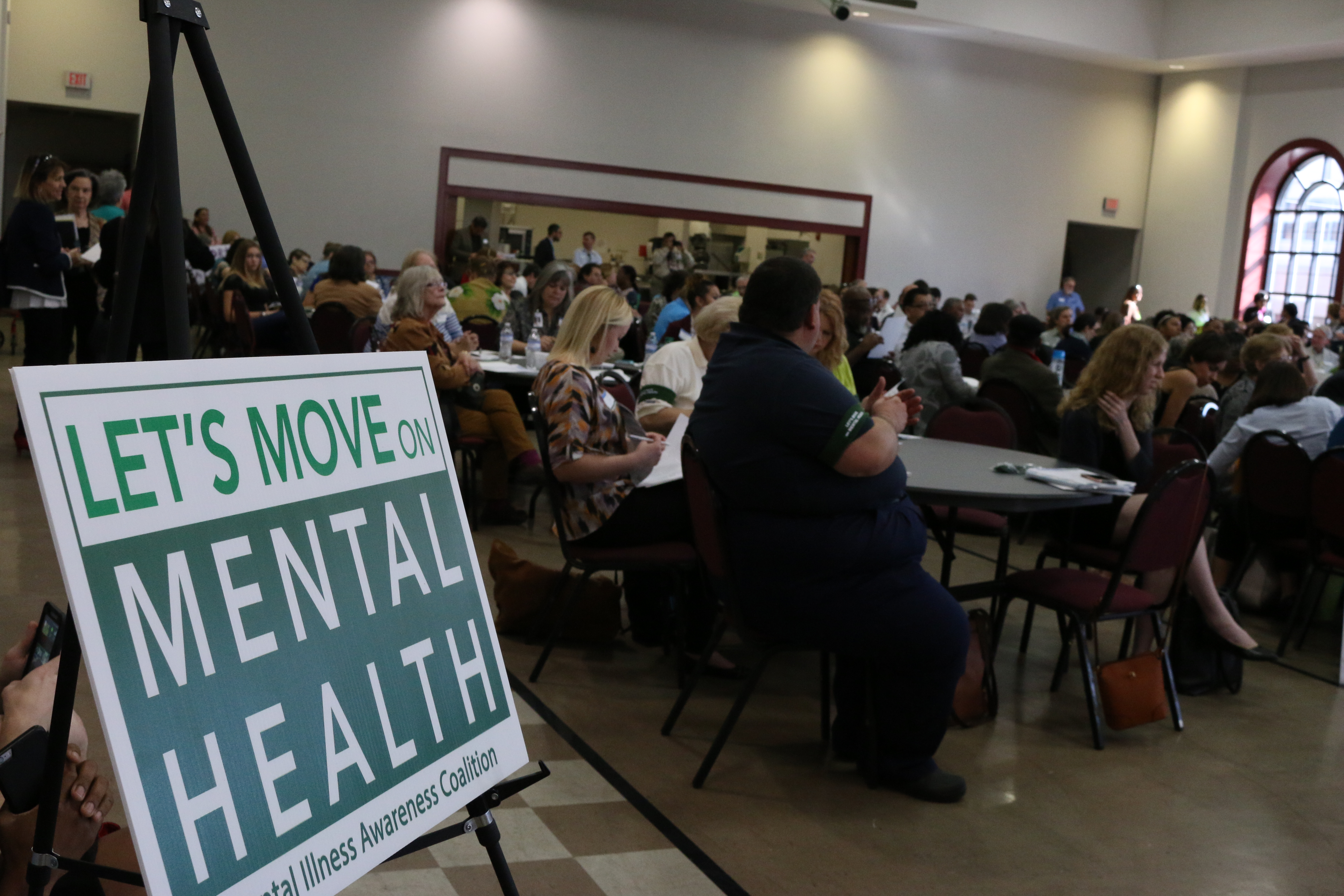 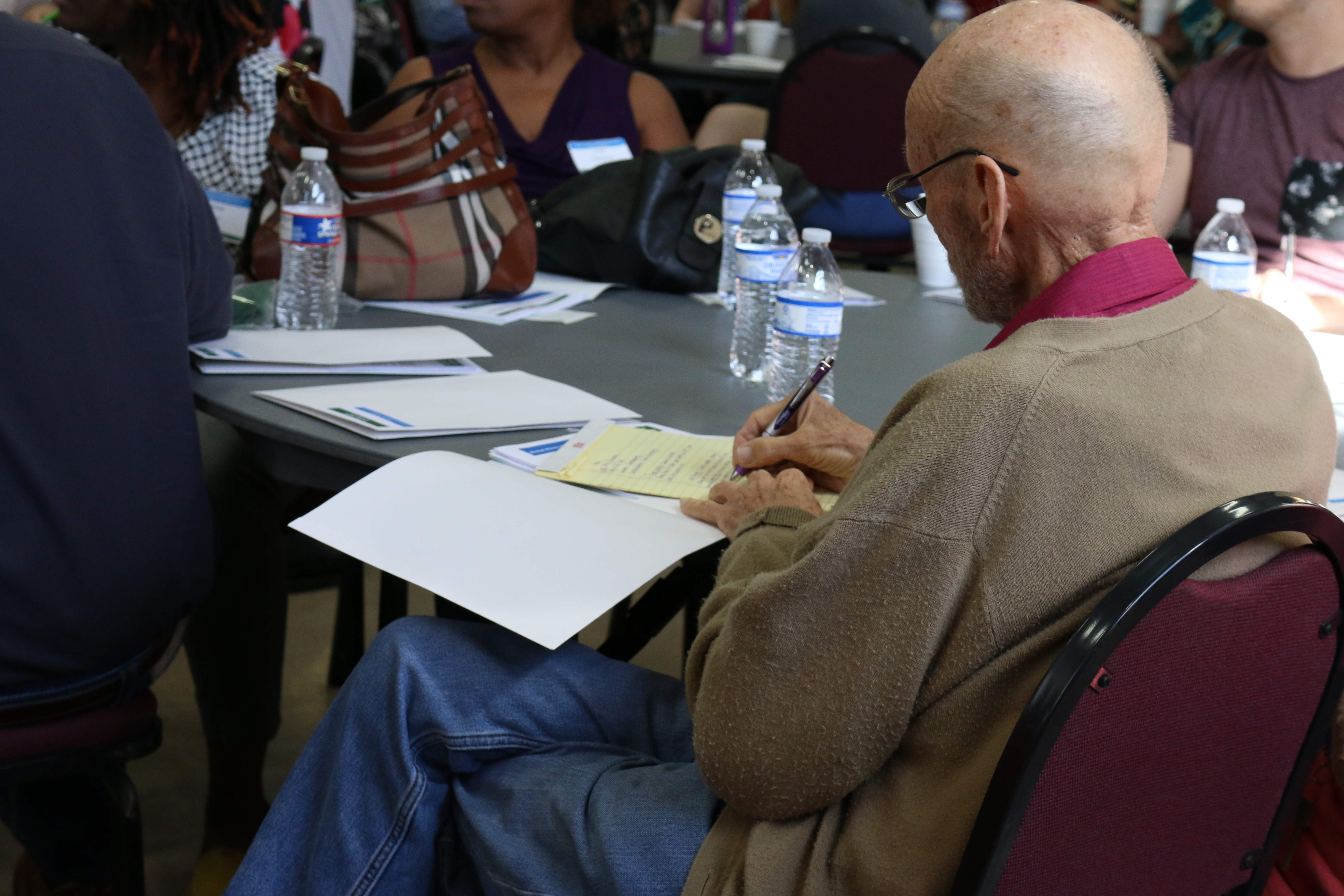 People meeting at First United Methodist Church reviewed the list of events and talking points for the day before walking over to the Texas State Capitol together. 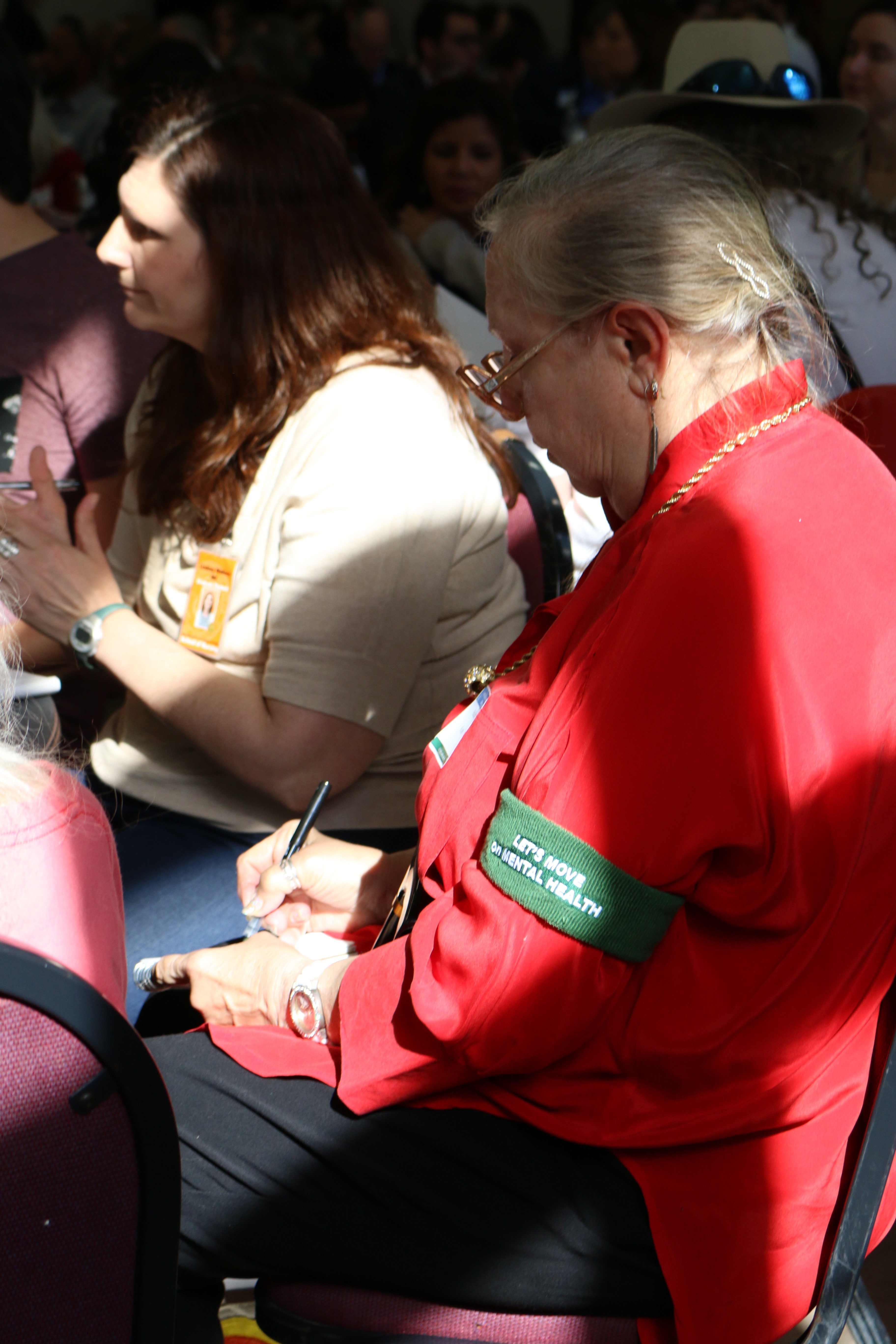 Those advocating for mental health awareness wore green headbands and armbands with the slogan, "Let's Move on Mental Health" as a way to show their support. 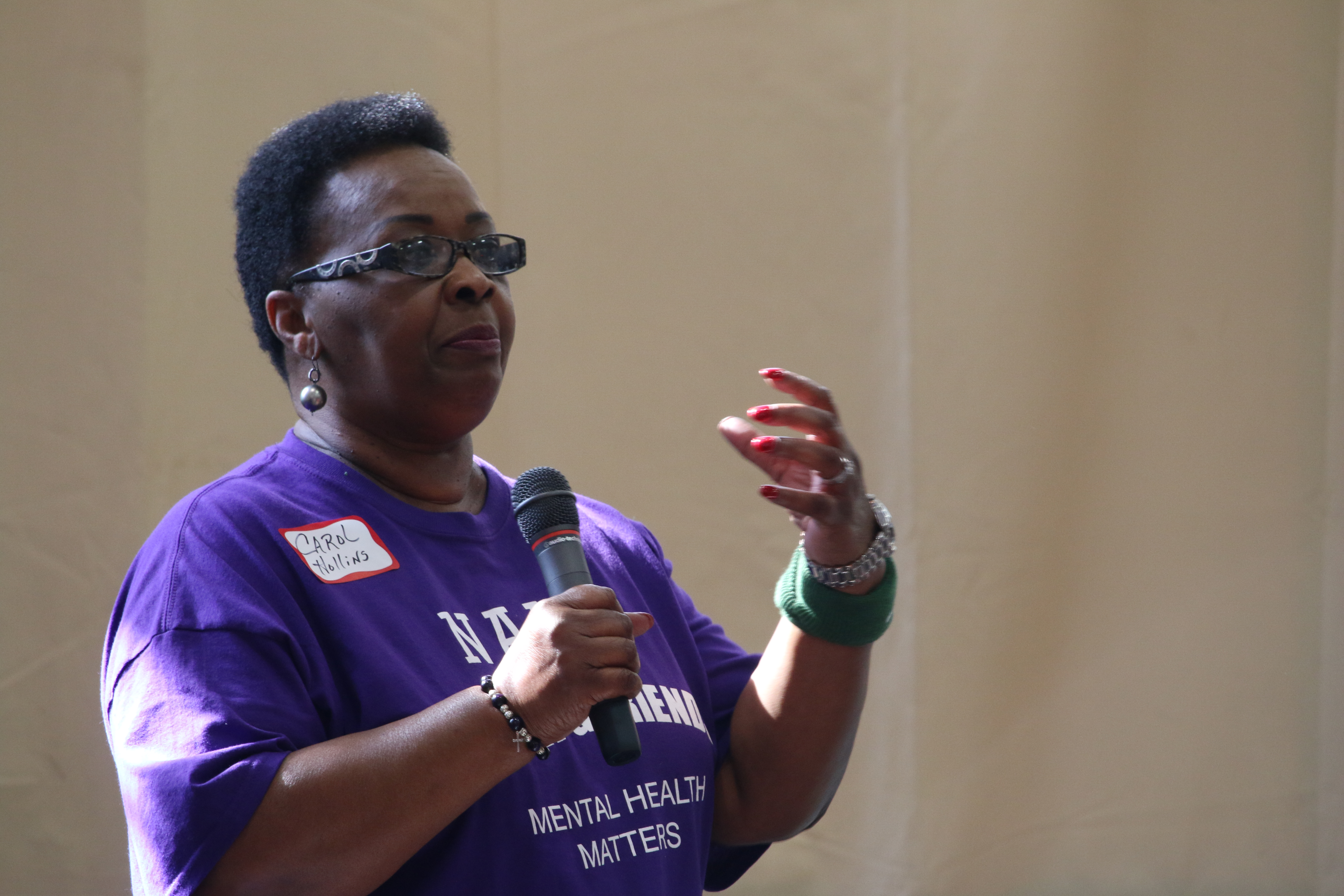 Carol Hollins asks a question about her daughter who has mental illness. The events included a Q&A session in the morning with other fellow advocates and speakers. 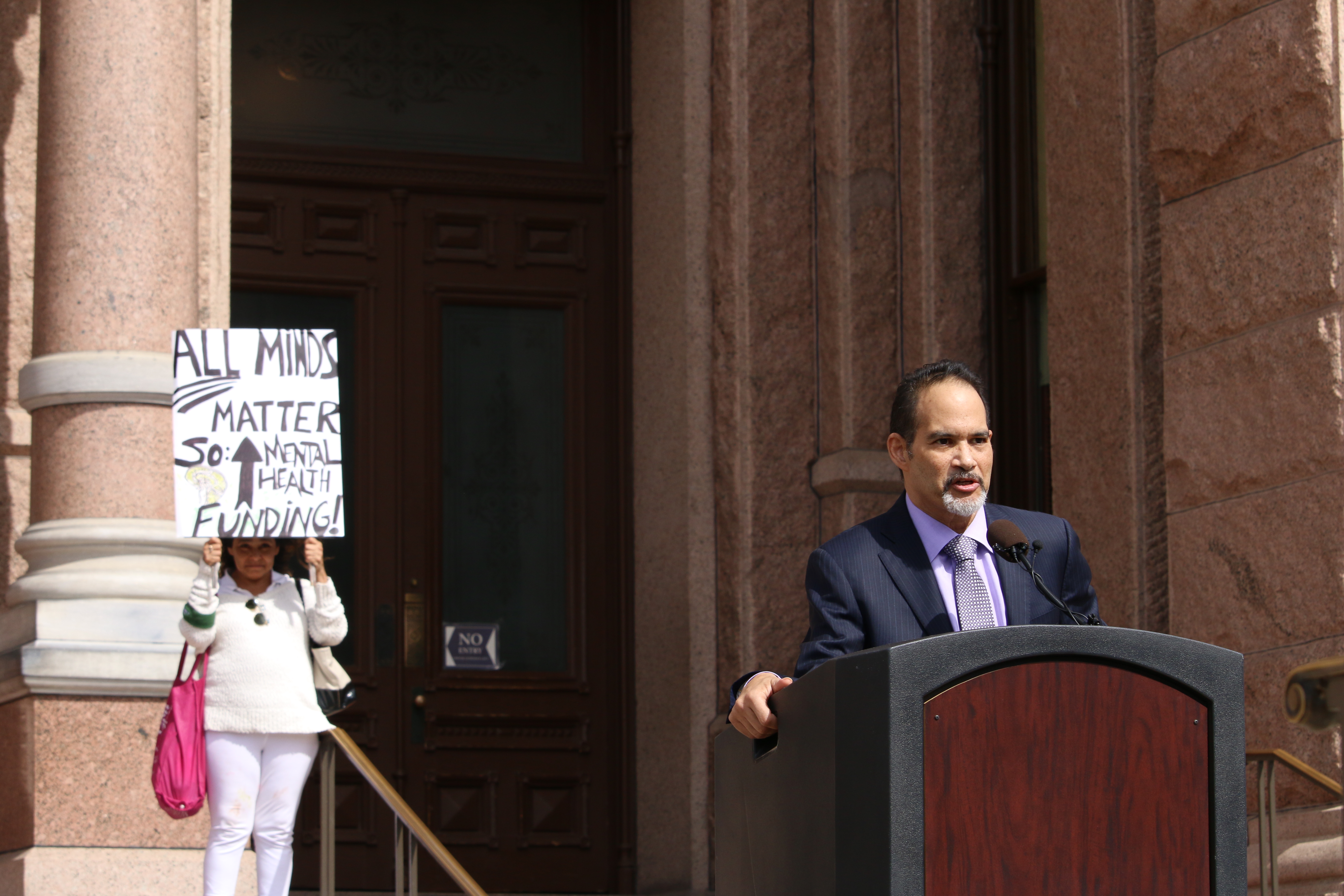 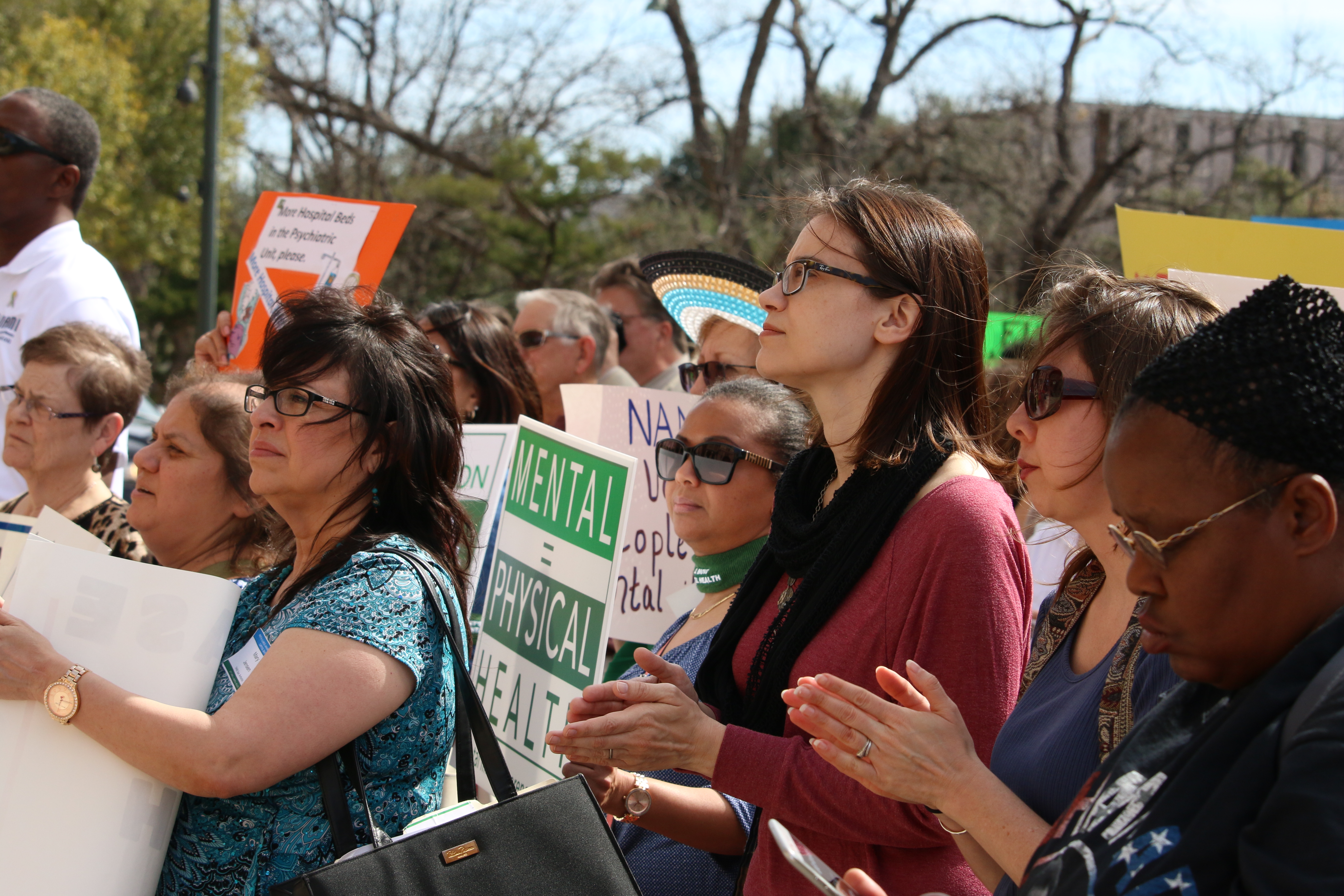 Advocates gathered in front of the Texas State Capitol to listen to the different speakers addressing mental health issues. 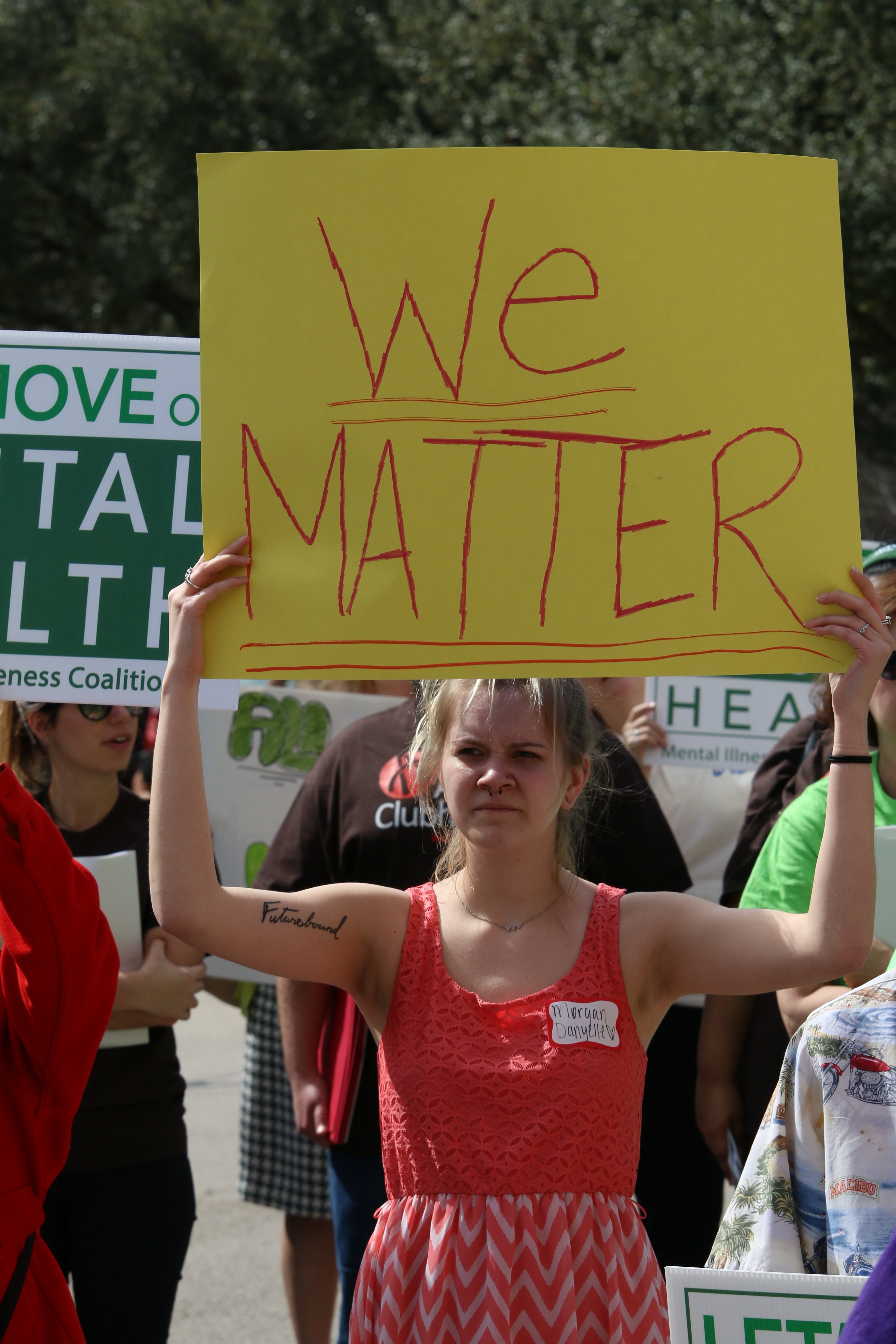 A woman holds a sign reading "We MATTER." Rally attendees held signs in front of the Texas State Capitol on February 8 as a way to advocate for mental health awareness. 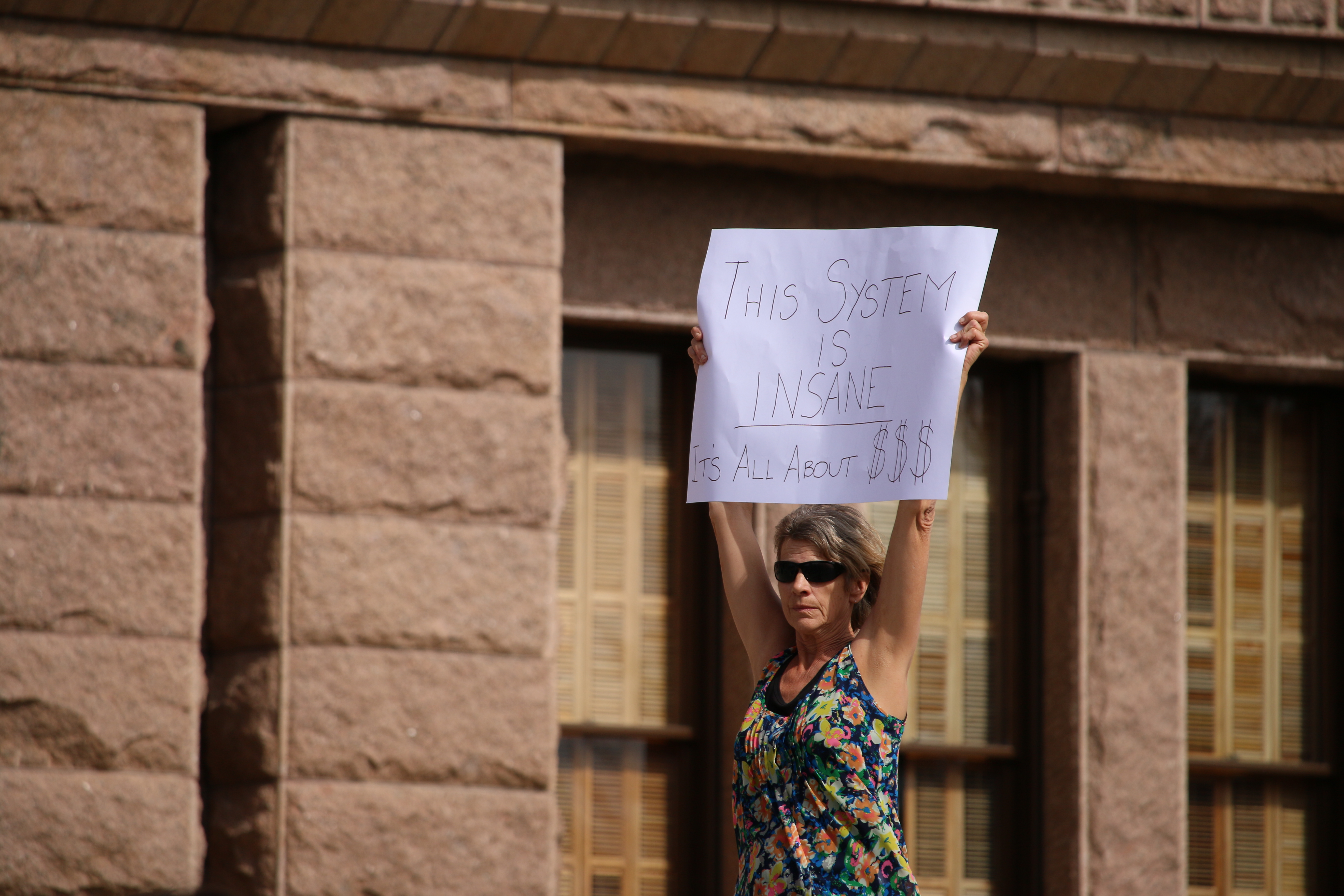 A woman holds a sign reading "This system is insane. It's all about $$$." Rally attendees held signs in front of the Texas State Capitol on February 8 as a way to advocate for mental health awareness. 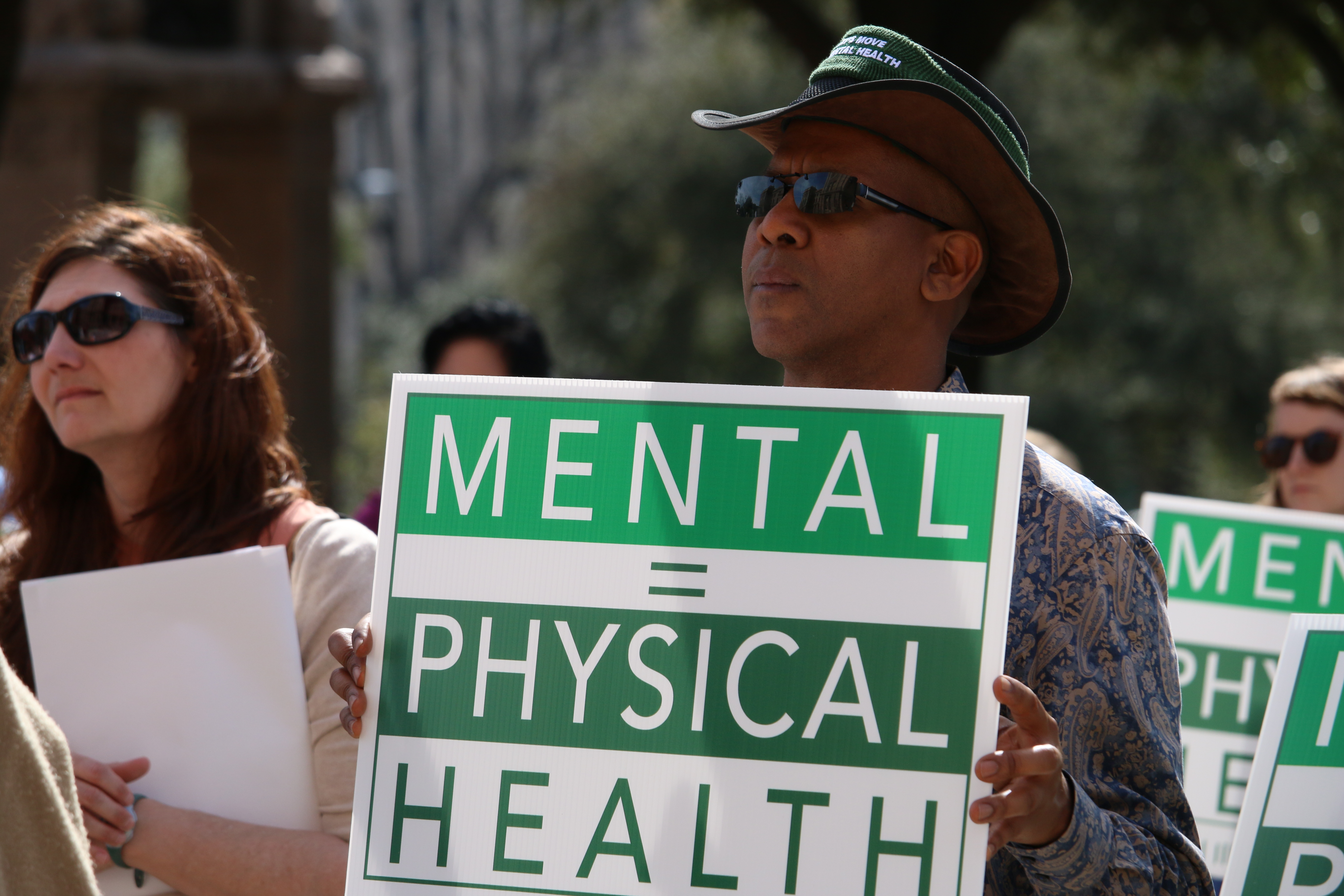 A man holds a sign reading "Mental=Physical Health." Rally attendees held signs in front of the Texas State Capitol on February 8 as a way to advocate for mental health awareness. 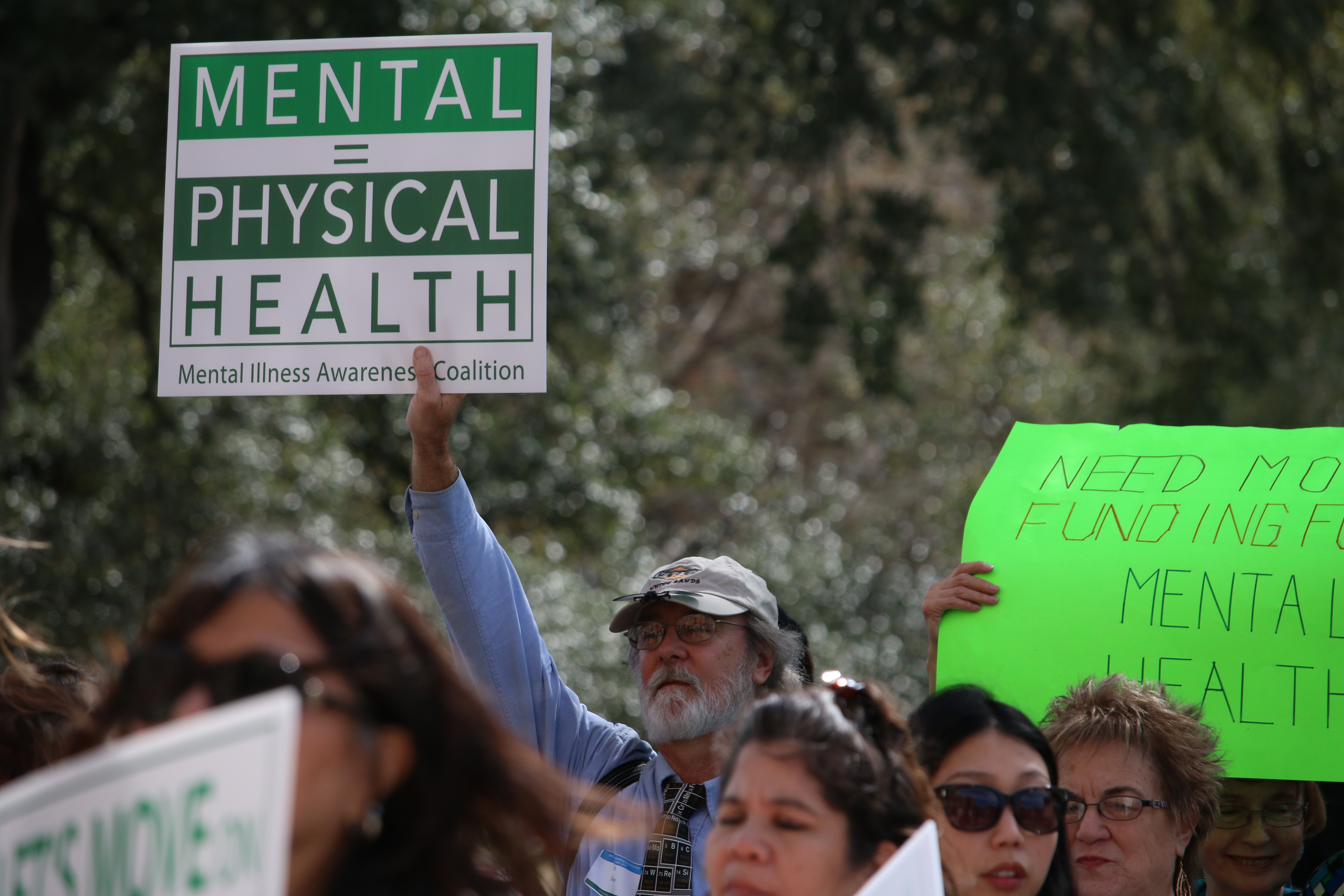 A man within a crowd holds a sign reading "Mental=Physical Health." Rally attendees held signs in front of the Texas State Capitol on February 8 as a way to advocate for mental health awareness.

Standing on the southern steps of the Texas State Capitol, Texas state representative Garnet Coleman addressed a crowd about the importance of funding for mental health care. For Coleman, who spoke in a lineup that included other state politicians, activists and health workers, the fight to improve access to mental health care is personal.

Coleman has bipolar disorder. He attributes his ability to have a successful life today to his access to the care he needs.

“What I hope to be at any time is an inspiration to people, so they know you can manage your illness,” Coleman said. “You can recover, you can do the things you want to do in life, just maybe with a few more pills than other people.”

The crowd cheered and waved signs with slogans like, “Decriminalize Mental Illness,”  “Mental = Physical Health” and “We Matter.” Several hundred people — those with mental illnesses, their family and friends, healthcare professionals and activists — had come to spend the day at the Texas State Capitol on Feb. 8, where they participated in advocacy training, attended a rally and met with legislators.

Though sometimes forgotten about in conversations involving health care, individuals with mental illnesses make up a significant percentage of the populace. According to the National Alliance for Mental Illness, 1 in 5 Americans will have a diagnosable mental disorder in a given year, an estimated 57.7 million people.

Mental Health America, a mental health non-profit, ranked Texas 45, out of 51 states and the District of Columbia, in terms of mental health care accessibility.

Daniel Dawes, healthcare lawyer and author of 150 Years of Obamacare, says that the main obstacles in accessing mental health care include high costs and a need to integrate mental health services into primary care. Perhaps one of the biggest problems is simply a dearth of available mental health workers.

Rally attendees, like University of Southwestern Medical resident psychiatrist Sarah Baker, expressed a frustration with this lack in treatment options.

“There’s a huge shortage of psychiatrists in the states, so the patient load for psychiatrists can be really high, especially in the public sector,” Baker said.

Dawes says he isn’t sure what to think about a potential repeal and replace of the Affordable Care Act. On one hand, he says, President Donald Trump had indicated his support for mental health care during the campaign. On the other hand, he does not find the leading plans to repeal and replace promising.

At the moment, the future of mental health care is uncertain. Potential solutions to this uncertainty may be strengthening access on a more local, state level. For example, Allison Mohr-Boleware and Monica Villarreal, fellows at the Hogg Foundation for Mental Health and the Center for Public Policy Priorities, said that Texas should have its own mental health parity law. That way, even if the Affordable Care Act is repealed, all health insurance plans will still be required to provide mental health care at the same level as other types of care.

“It has taken us 150 years to get to where we are today, in terms of mental health reform,” Dawes said. “That is something [legislators] need to seriously consider, if they care about this issue of mental health, about addressing the opioid issue in our country. There are now provisions in [the Affordable Care Act] that will help us tackle that. If we get rid of them, imagine how much further behind we are going to be.”