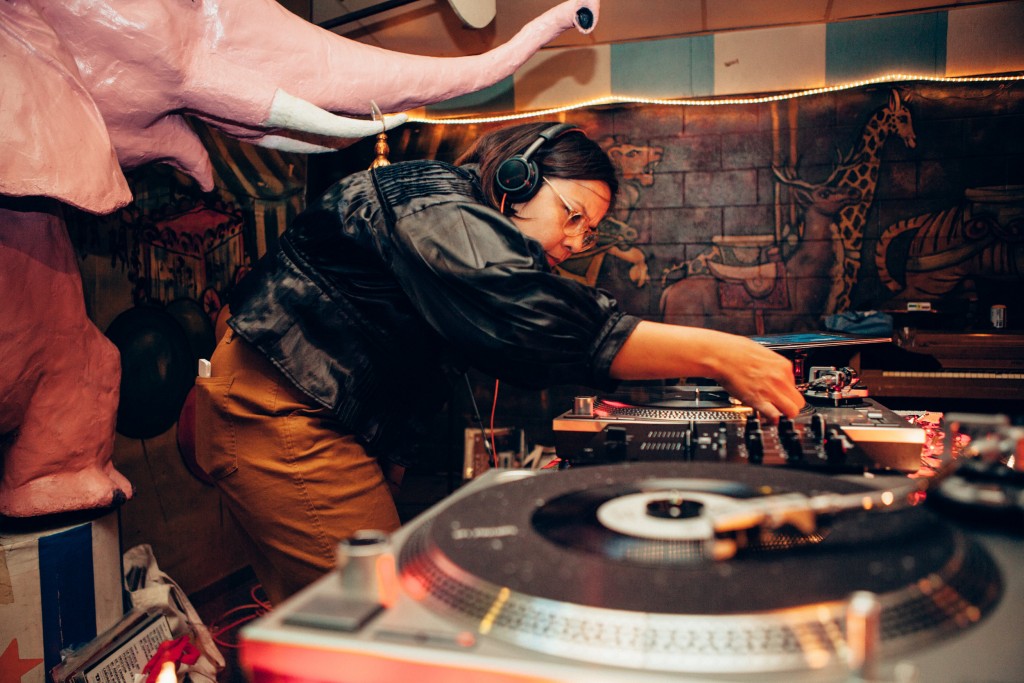 Chulita Vinyl Club team lead and DJ Xochi Solis focuses on the turntable at the collective’s gig Feb. 24 at the Carousel Lounge. The “all-girl all-vinyl” group of DJs is based in Austin and has chapters in San Antonio and on the West Coast.

The vibrant sounds of cumbia, salsa and other Latin rhythms pulsated the walls of the Carousel Lounge in East Austin one cool Friday evening in February. Inside, a life-size ceramic elephant served as the backdrop to the DJ table, where various women took turns pulling records from their sleeves and laying down hip-swaying beats. At the carnival-themed bar, patrons sipped Lone Stars and nodded their heads until a particular song moved them to the dance floor. The festive mood was typical of this particular DJ collective’s gigs, but it was a rare night when most of the members of the Austin chapter were together, taking turns as older members helped out new ones.

Austin native Claudia Saenz founded the Chulita Vinyl Club in 2014 when she noticed a lack of spaces for women — especially women of color — in the DJ industry. In just three years, the group blossomed into a thriving organization with about 50 chulitas — the word is a term of endearment in Spanish and means “cutie” or “sweetie” — and seven chapters across Texas and California. The “all girl all vinyl” collective teaches new members the technical skills needed to work a turntable while encouraging a judgement-free space for women whose identities are often marginalized in the music industry. Xochi Solis is a DJ and the Austin chapter’s “lead Chulita.”

“[DJing] isn’t hard, but it can be daunting when you’re trying to learn, and it’s a male-dominated arena,” Solis said. “So we create a safe space for learning technology, but also a safe space for conversations about identity politics, social justice issues.” 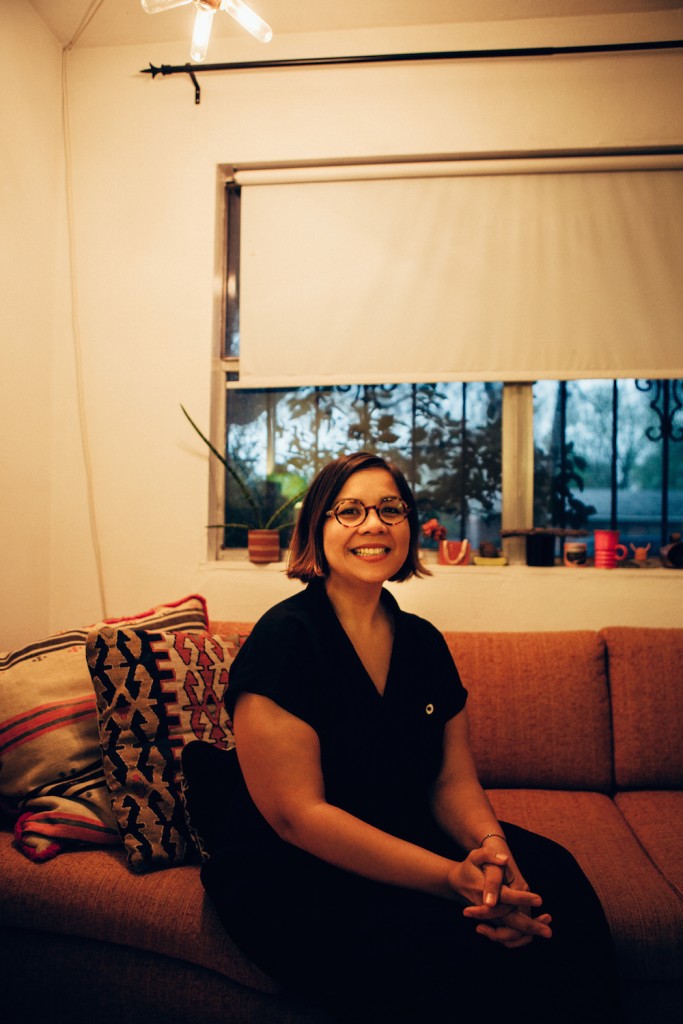 Xochi Solis is the lead Chulita and a DJ of the Chulita Vinyl Club’s Austin chapter. She said the collective is a “space to empower women of color in the DJ industry.”

Saenz has since moved to California and started four other Chulita Vinyl Club chapters there. Solis, a local visual artist, has taken on a leadership role here in Austin, where she’s fondly referred to as “mom” by the 20 or so DJs she helps manage. She says the group grows every other month or so.

“When we play gigs, women come up and want to know more about industry, or are excited because we played a song that reminded them of something their grandmother or grandfather played in kitchen,” Solis said. 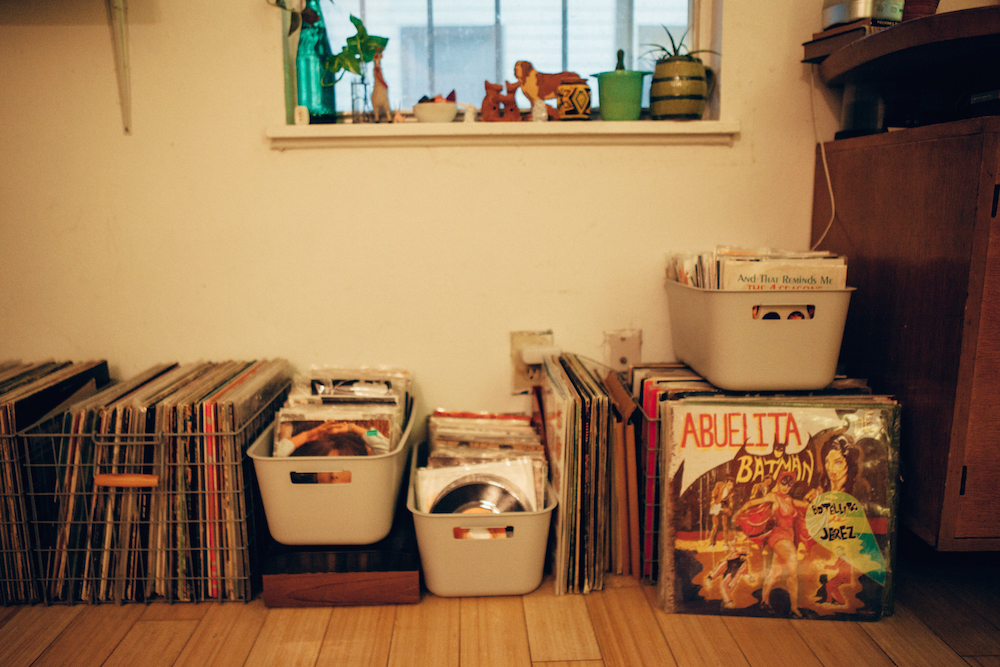 sarahjasminemontgomery_IMG_4630edit
Records stack the walls of Solis's home in East Austin. "What I really enjoy playing is Tejano music because it tells a story beyond what the song or the corrido or whatever the tune might be," she said. 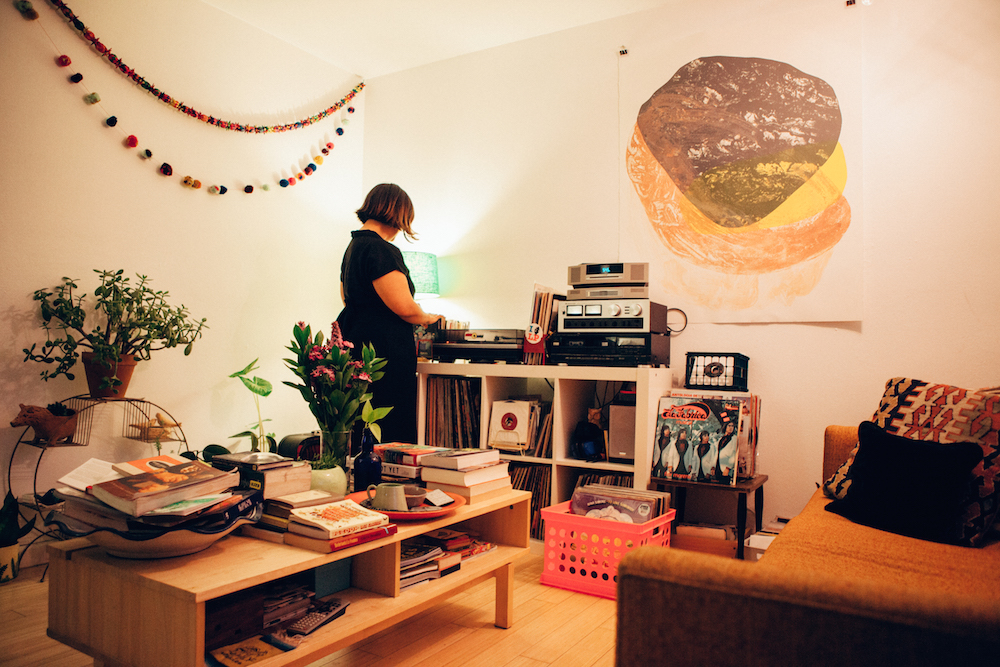 sarahjasminemontgomery_IMG_4621edit
Xochi Solis, team lead and DJ of the Chulita Vinyl Club, puts on a record at her East Austin home. Solis, who works as a visual artist, is known as the "mom" of the collective's Austin chapter. 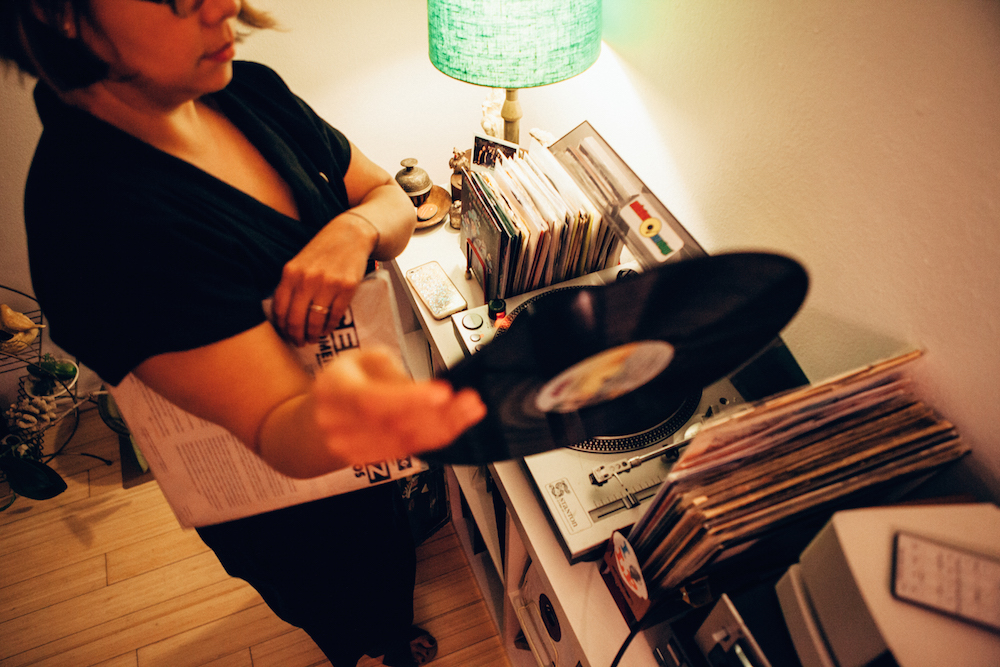 sarahjasminemontgomery_IMG_4603edit
A third generation Austinite, Solis grew up listening to the records her father played as a radio DJ at Baylor University in the '60s and '70s. "My love of vinyl came from my father," she said. 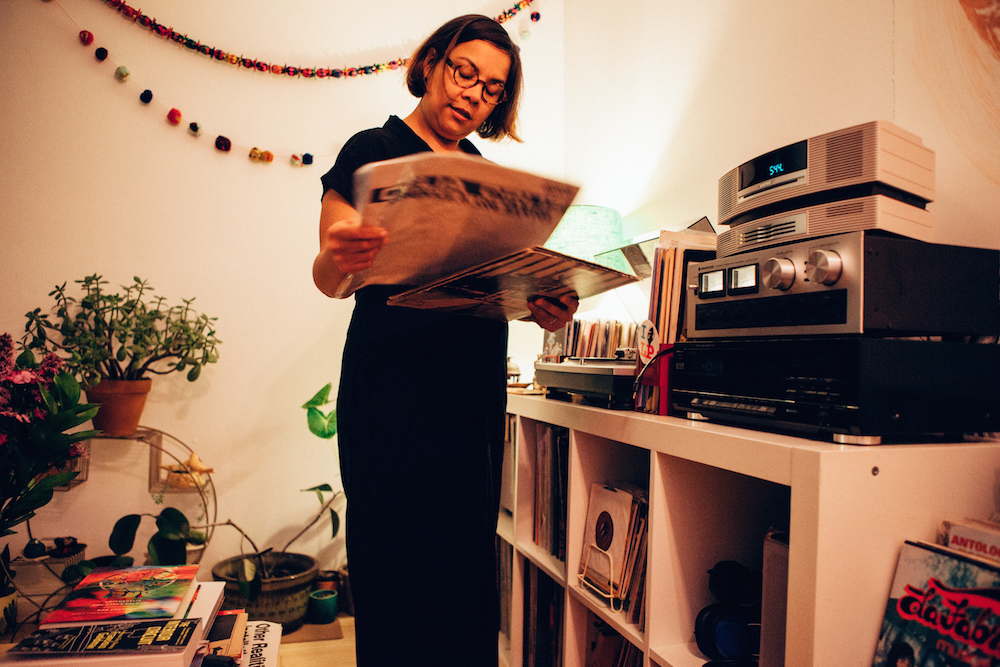 sarahjasminemontgomery_IMG_4610edit
Solis picks through records from her vast collection. "Primarily what I actually like and enjoy playing the most is Tejano music or music that is sort of indigenous to this area," Solis said. 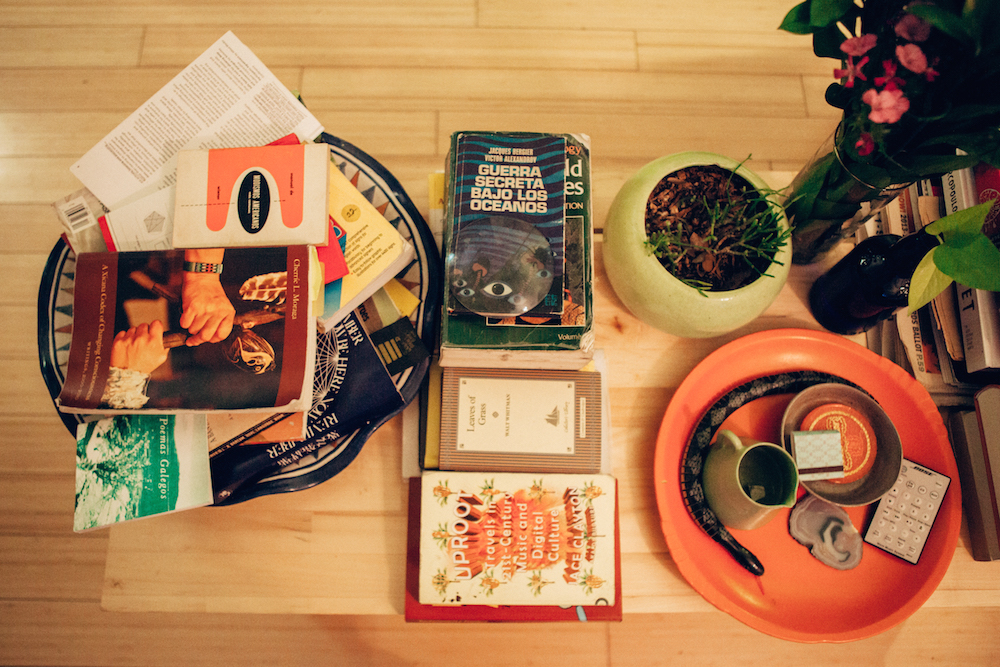 Solis began collecting her own records 20 years ago. As a small girl, she listened to the vinyl collections of her father, who was a DJ at Baylor University’s student station in the 1960s and ‘70s. Her personal collection ranges from the sounds of the Queen of Tejano music Selena Quintanilla to the more experimental music of Yoko Ono and Laurie Anderson. But as a third-generation Austinite and self-identified Tejana, it’s the native sounds of Mexican-Americans in Texas that Solis loves to play the most.

“It tells a story beyond what the song or the corrido or whatever the tune might be,” Solis said. “There’s a story of, ‘Hey this is on Teardrop Records’ or, ‘This is on Joey Records based out of San Antonio,’” Solis said. “It’s really about this endeavor of enterprise that people wanted to share this music and share these stories.” 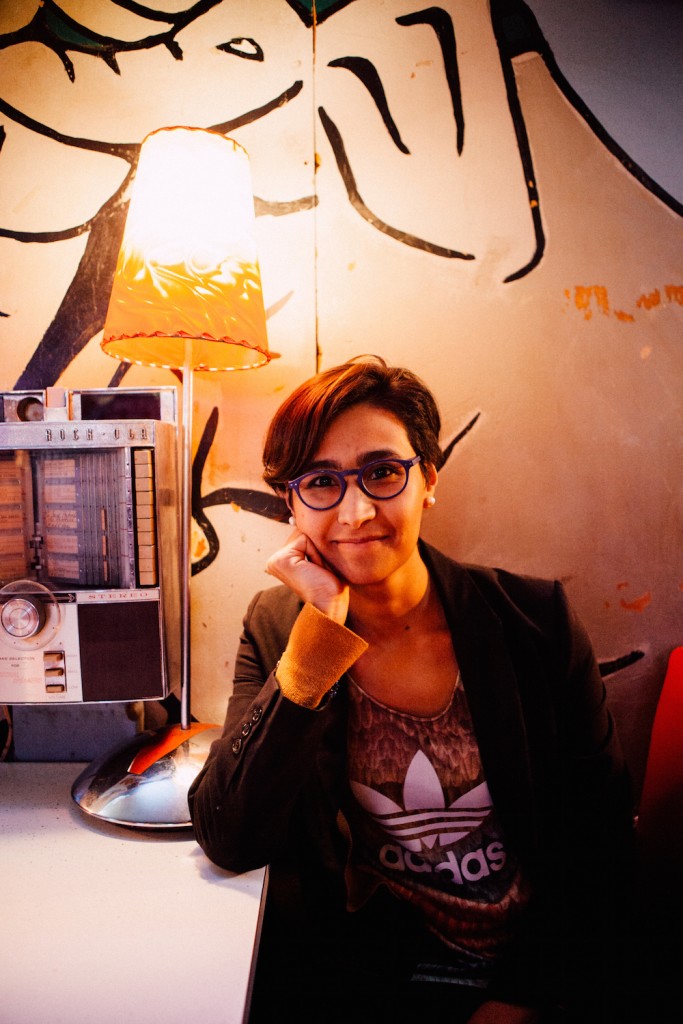 Chulita Vinyl Club DJ Ana Cecilia “La PhDj” Calle said she didn’t feel at home in Austin when she moved from Colombia to pursue a doctoral degree. “I thought the best way to feel at home would be to bring my record collection,” she said.

Every DJ in the group has her own repertoire, from salsa to hip-hop to ‘80s pop. Ana Cecilia Calle, who goes by “La PhDj” when she’s behind the turntables, plays a lot of cumbia — a dance genre popular across Latin America — from the ‘50s and ‘60s. When she moved to Austin from Colombia to pursue a doctoral degree at the University of Texas at Austin, she didn’t feel quite at home. But she thought bringing her record collection would be the best way to settle in. For her, the draw to vinyl is in the materiality of the format.

“Being able to carry something and saying this is actual sound, and all I have to do is put a needle and make it spin,” Calle said. “So when it spins, the whole history of that object spins as well. Like the travels it had to make, the scratches it has. It is a single thing happening — and it only happens once — that’s the history of that object playing in that very moment.”

Camila “Cienfuegos” Torres-Castro is one of the newest DJs in the collective. She joined after moving from a small town in Mexico to Austin, also to pursue a doctoral degree. Like many of the DJs, she found the group on Facebook, and she was drawn in by the appeal of learning how to spin. But she also found a friend group — a multicultural group with “political edge.”

“I don’t mean to brag or anything, but I think what we do is a really way of resisting right now because we’re all women of color, and we’re making space in a scene that’s predominantly male,” Torres-Castro said. “It’s not just spinning because of spinning, we are actually doing it with a conscience of our position as women in color in this day and age with Trump as president in Texas.”

As the chulitas spin at the Carousel Lounge — which has asked the collective to perform a monthly show — and other shows across the city, including at South By Southwest, it’s clear the chulitas have created a much-needed niche here. In Austin, women make up 20 percent of musicians in the city, and 10.4 percent of musicians identify as Hispanic, according to last year’s Austin Music Census. Solis said “a space of exploration” like the Chulita Vinyl Club empowers the women individually and makes them stronger together.

“Things are changing really fast in our communities, and I think the call for Chulita Vinyl Club to come together was in reaction to that change,” Solis said. “We were seeing our own communities of other people of color diminishing and going, ‘Where are the people that I can relate to culturally?’” 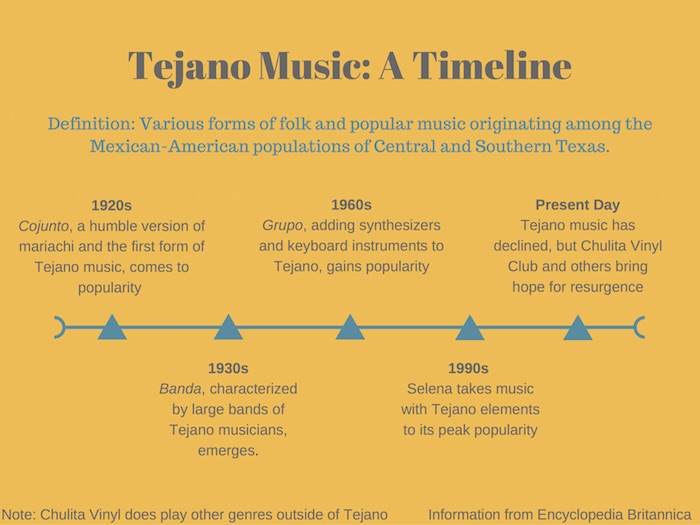 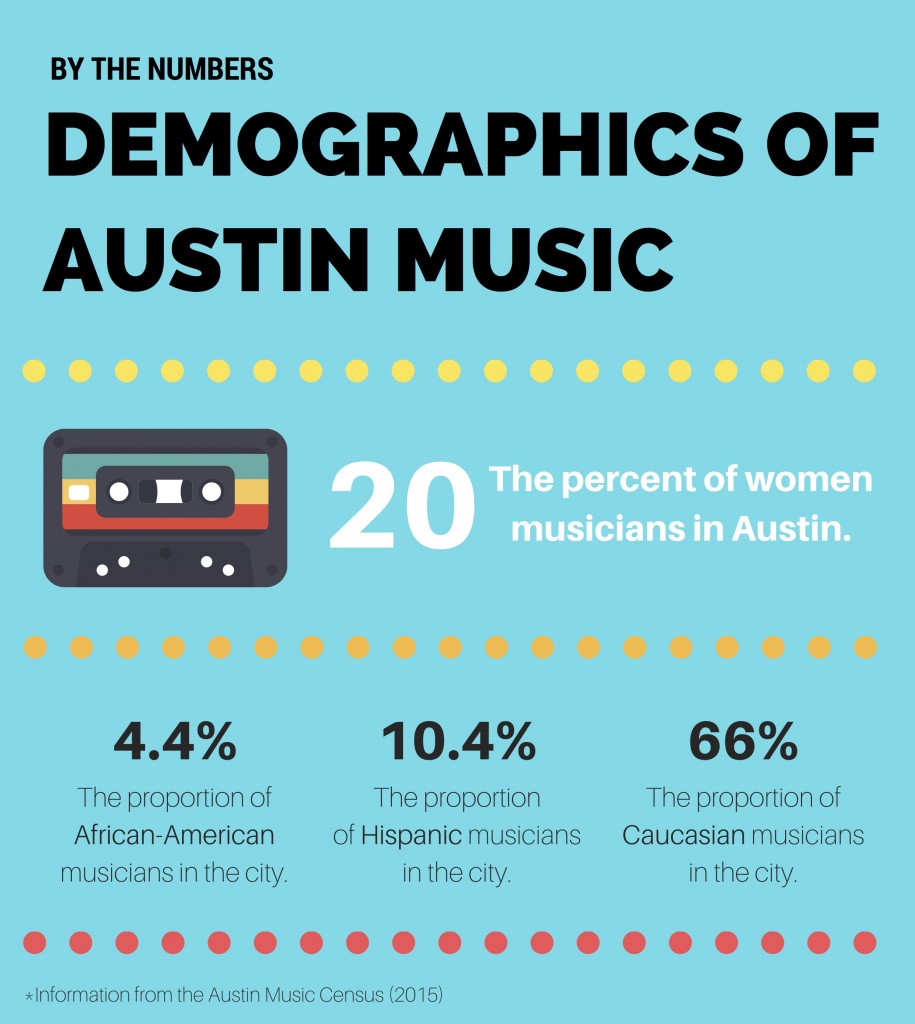