A Need for the Sport, a Need for Community

Art From The Streets

Mar. 07 Arts and Culture Comments Off

David Schumaker woke up every morning on the cold streets of Austin, but one day this would all change.

Schumaker was walking past the Trinity Center downtown, and a woman volunteer at a local art studio stopped him and asked him to tell his story. Schumaker explained how he had been living on the city streets for more than 5 years due to the loss of his parents, alcoholism and drugs.

The volunteer immediately invited him into the art studio and told him to take that grief and anger and paint a picture.

“At the time I had a broken heart and a lost soul, but the program was therapeutic for me,” David Schumaker said.

For over 25 years, Art From the Streets has given the homeless community a chance to start over by providing them with a studio at the Trinity Center, art supplies, and volunteers to help sell art in hope to create a new beginning.

The non-profit organization is run on donations and holds pop-up art shows around downtown Austin. The art shows provide an opportunity for income for the contributors, 80 percent of the earnings of the art go to the artist. Their slogan, “Give Art a Home”, fully embodies the message that AFTS provides an encouraging space for artistic expression for those who need it most 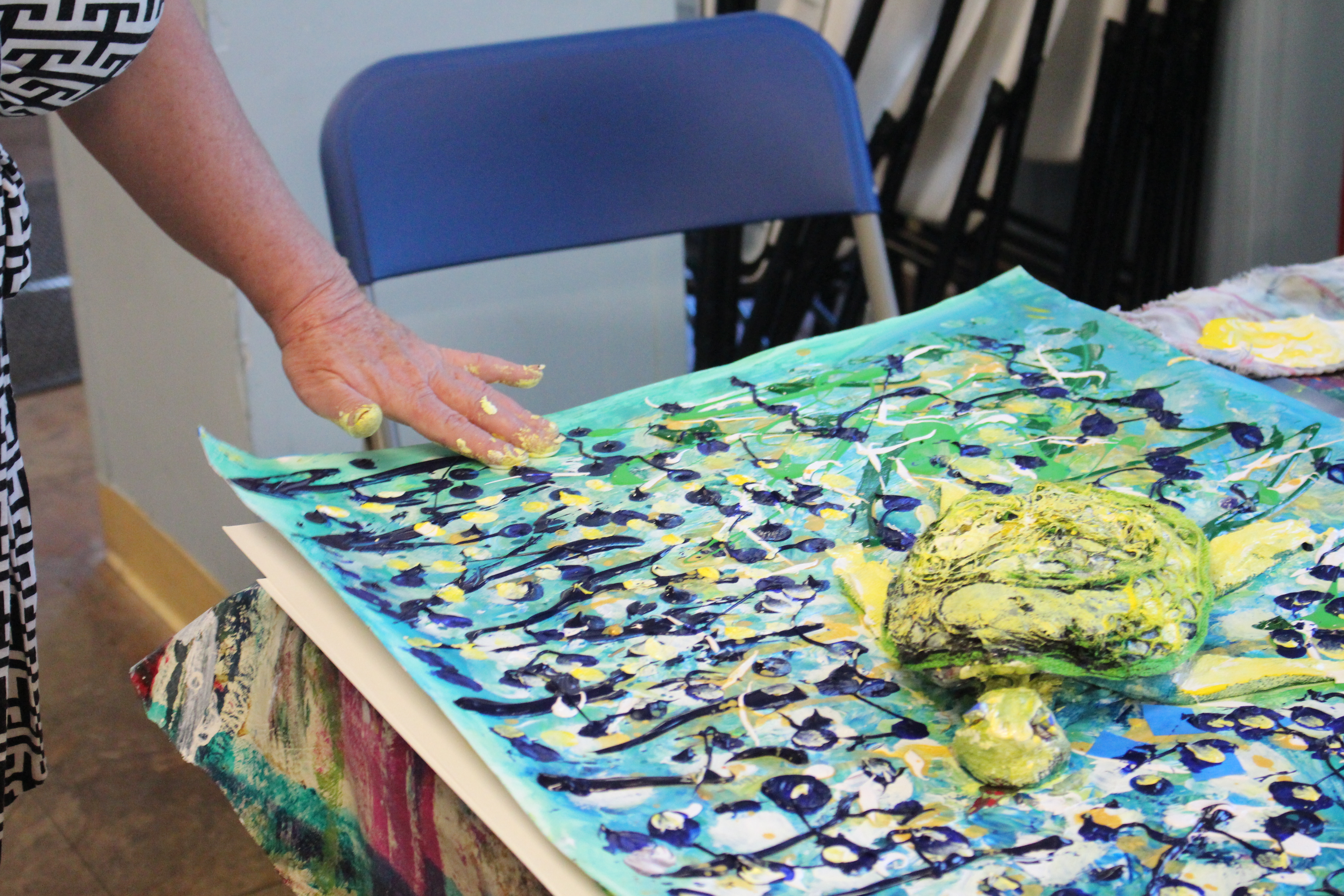 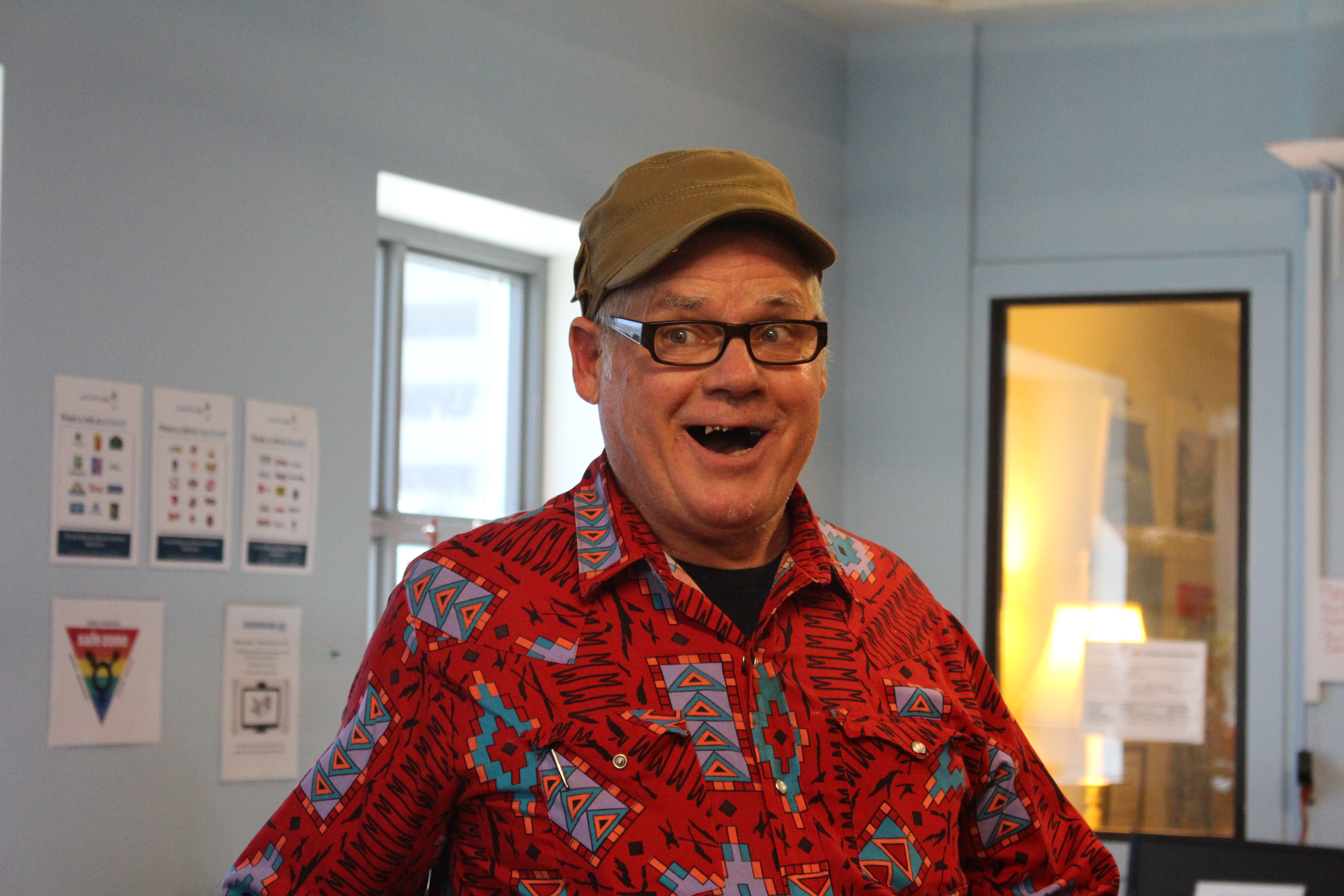 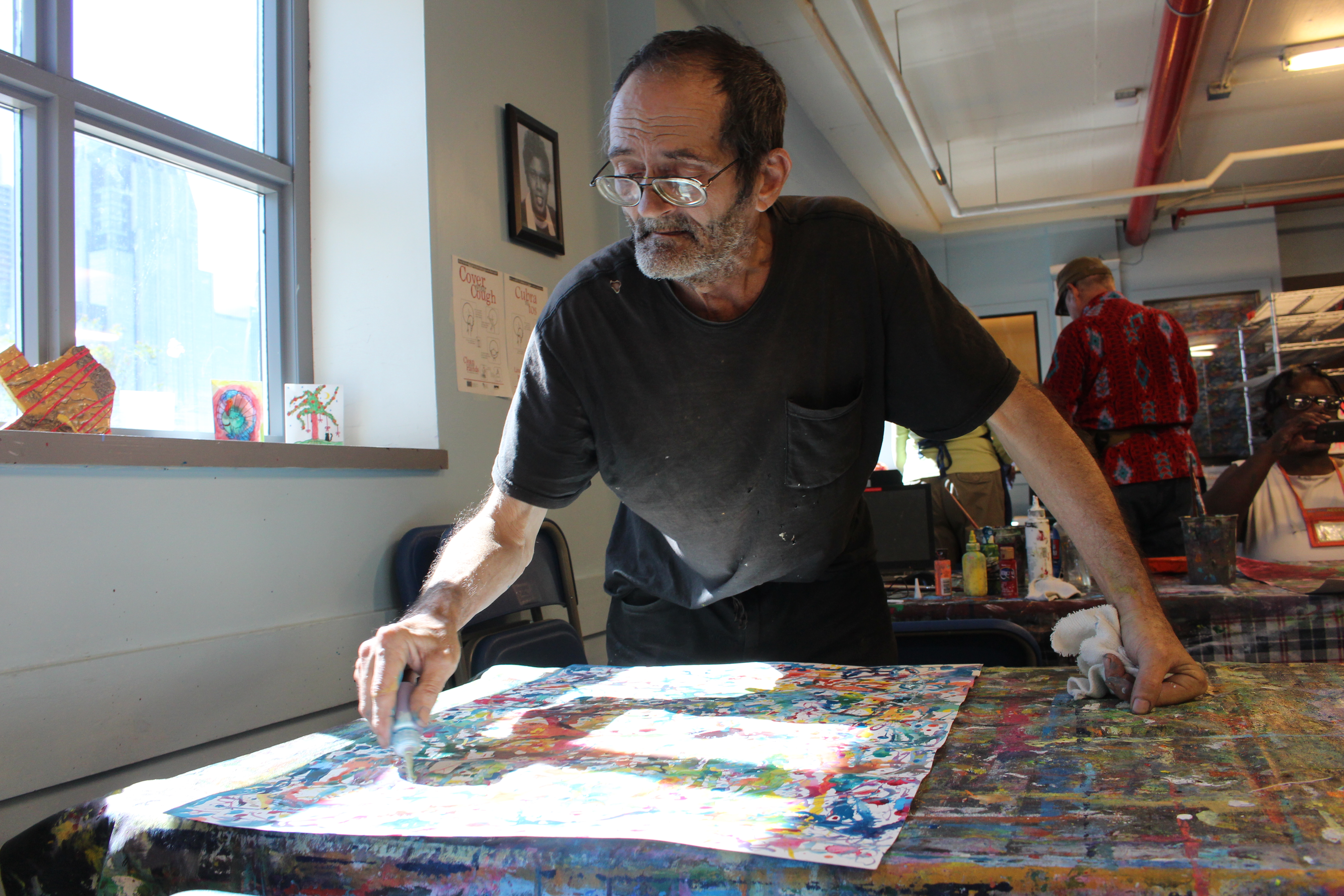 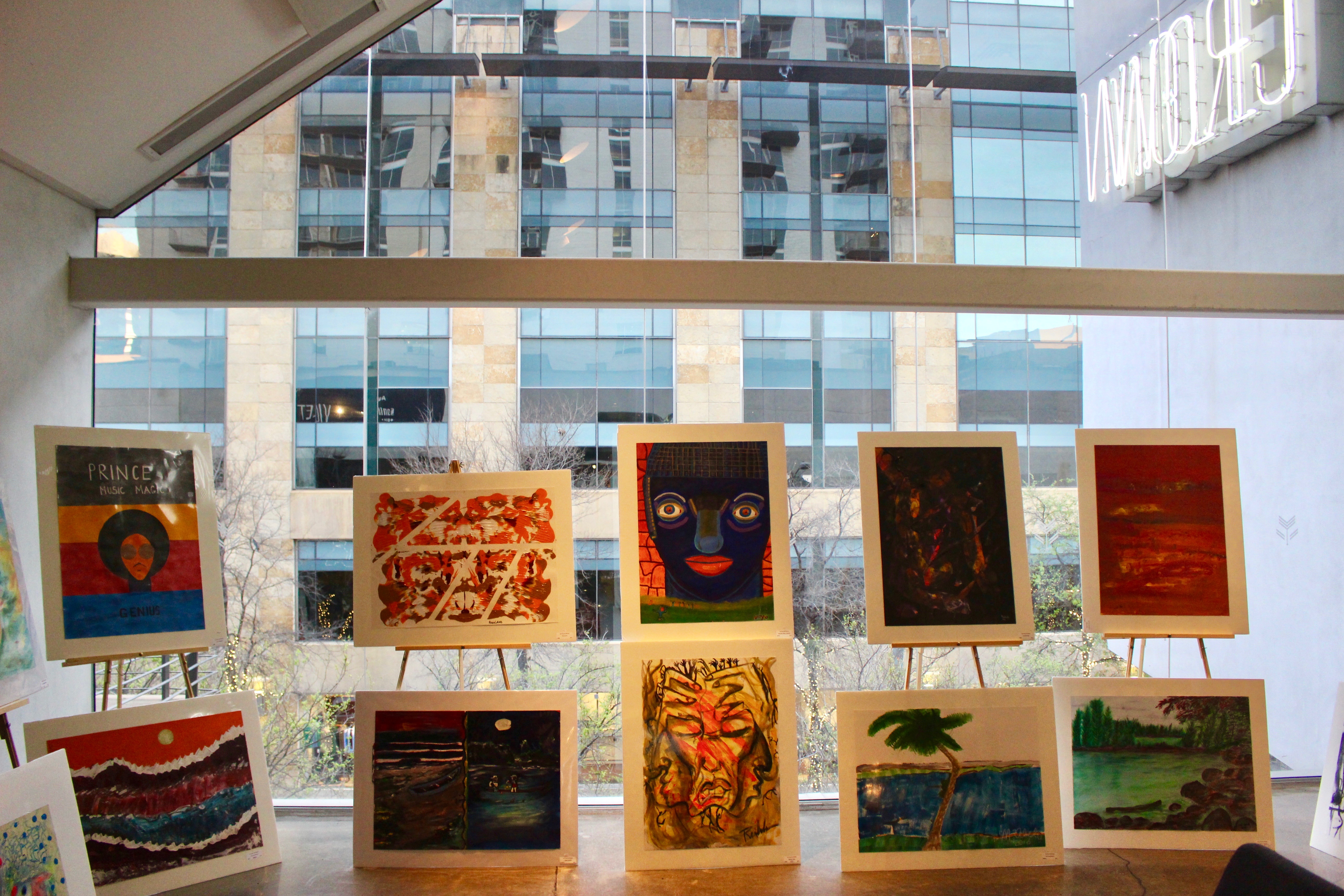 Art pieces are displayed on easels, the walls of Violet Crown, and tons of folders throughout the cinema. 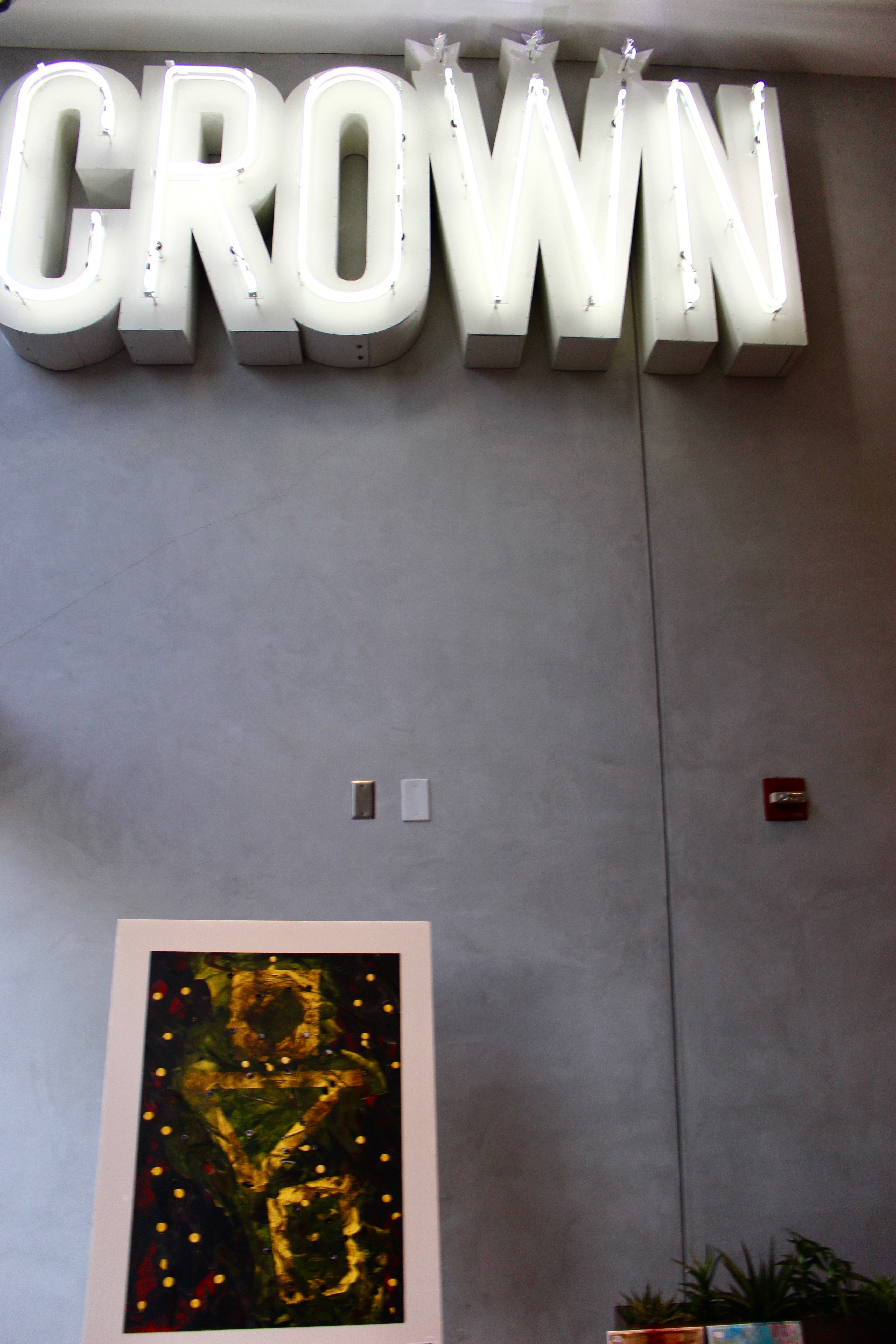 Artists receive 80 percent of the profits that the studio makes from selling their creations during art shows and displays. 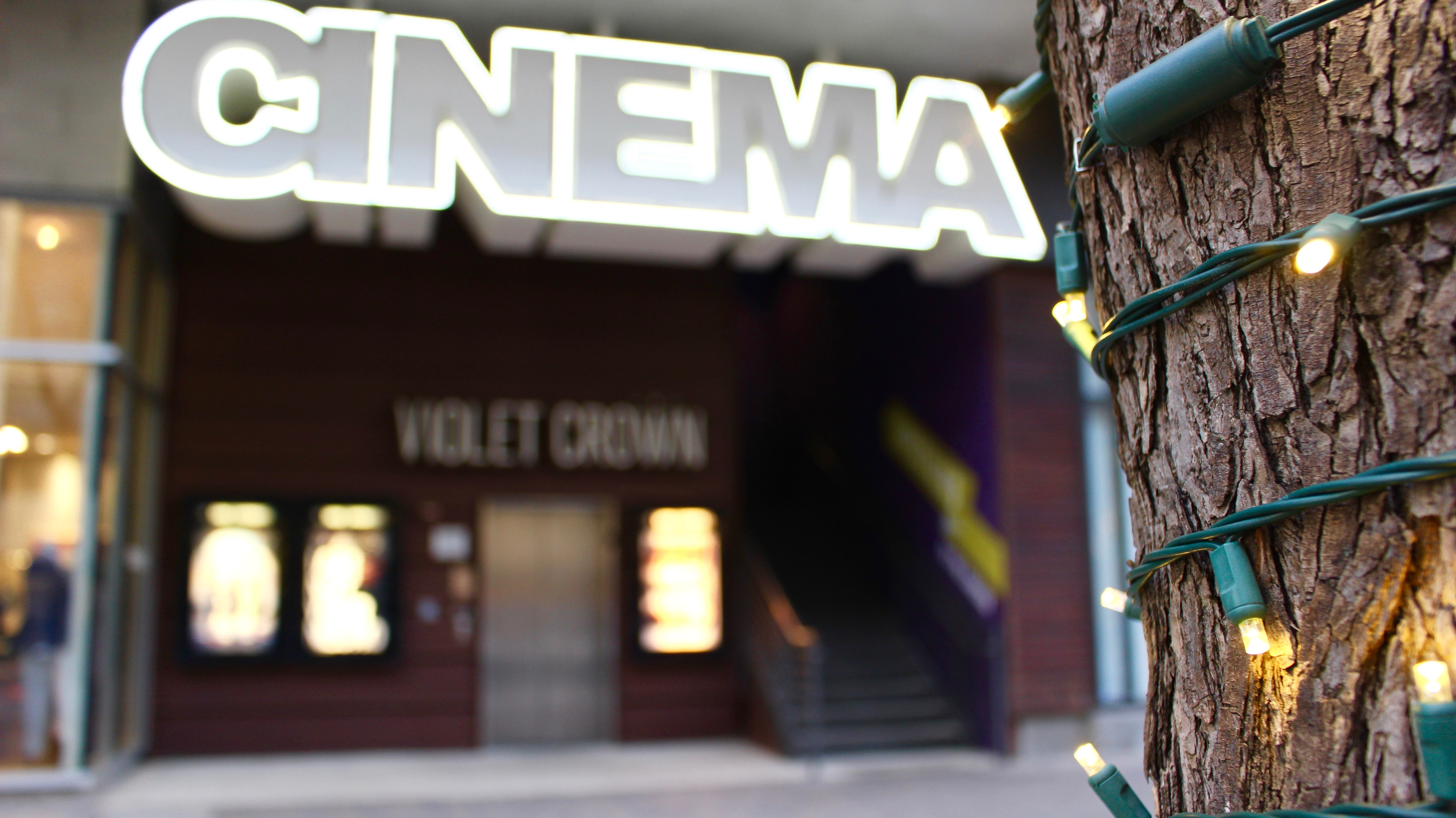 Art pieces are displayed at Violet Crown Cinema in order to raise awareness for the studio and allow the artists to gain exposure. 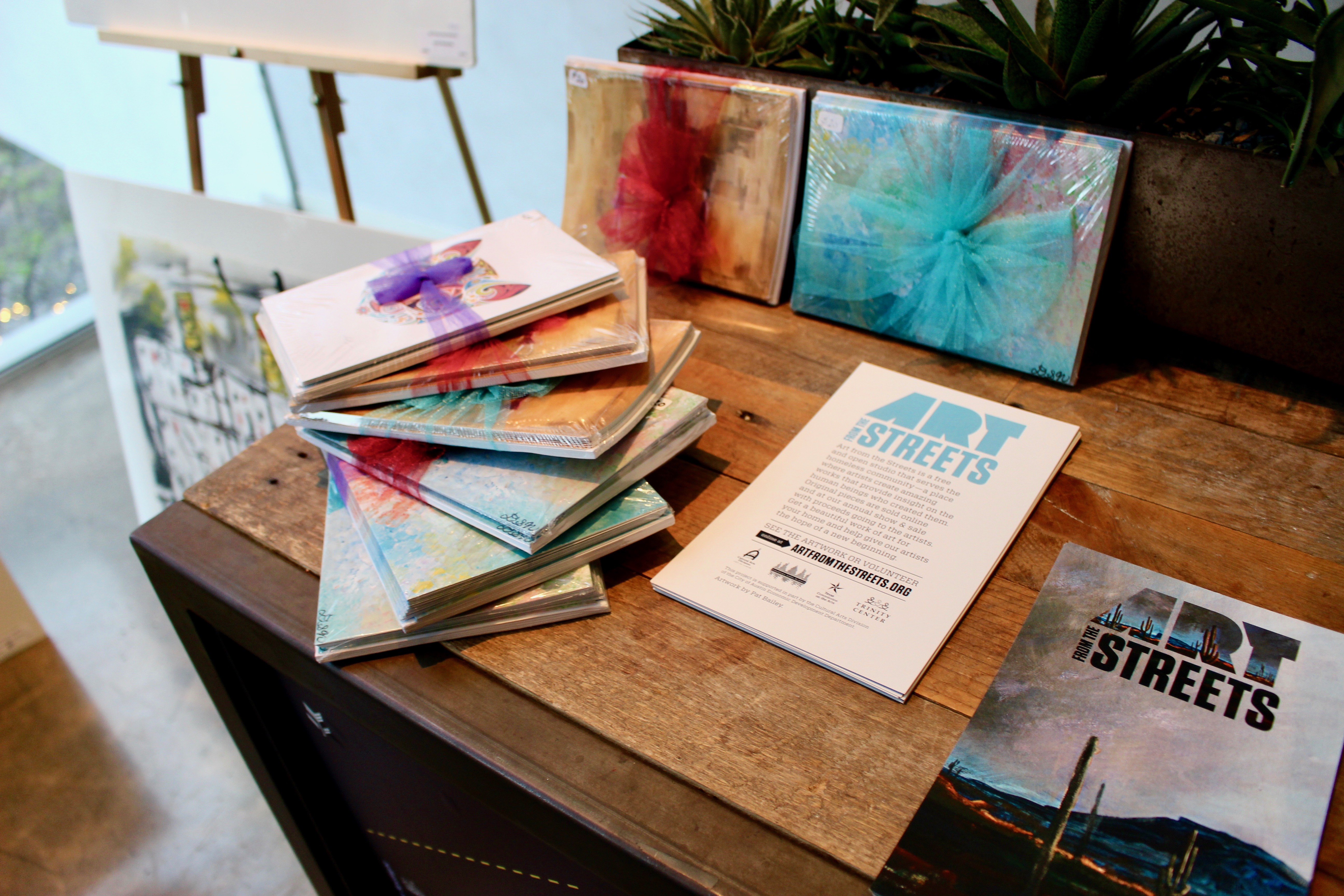 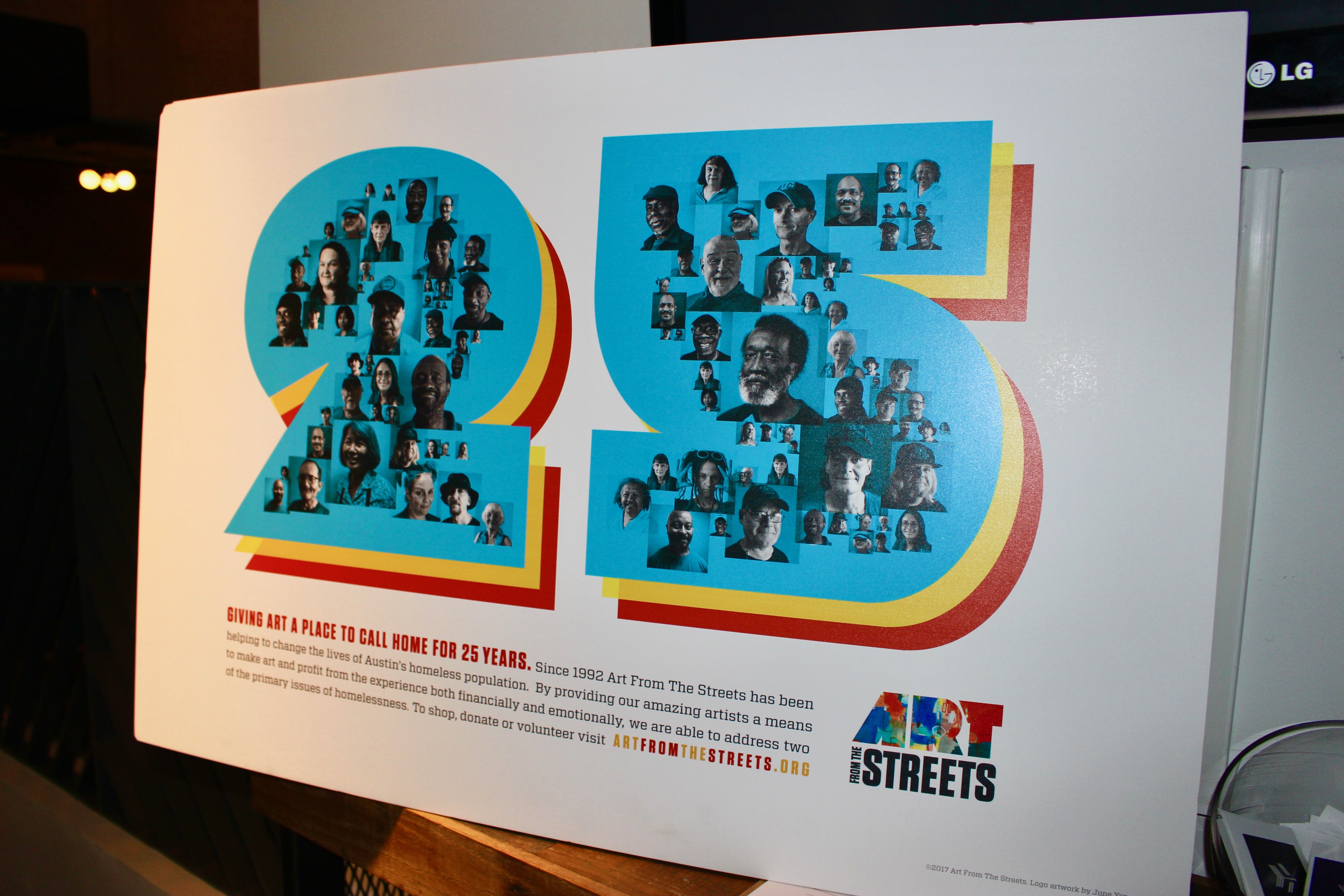 'Art From The Streets' celebrates 25 years with an art show at Violet Crown Cinema. 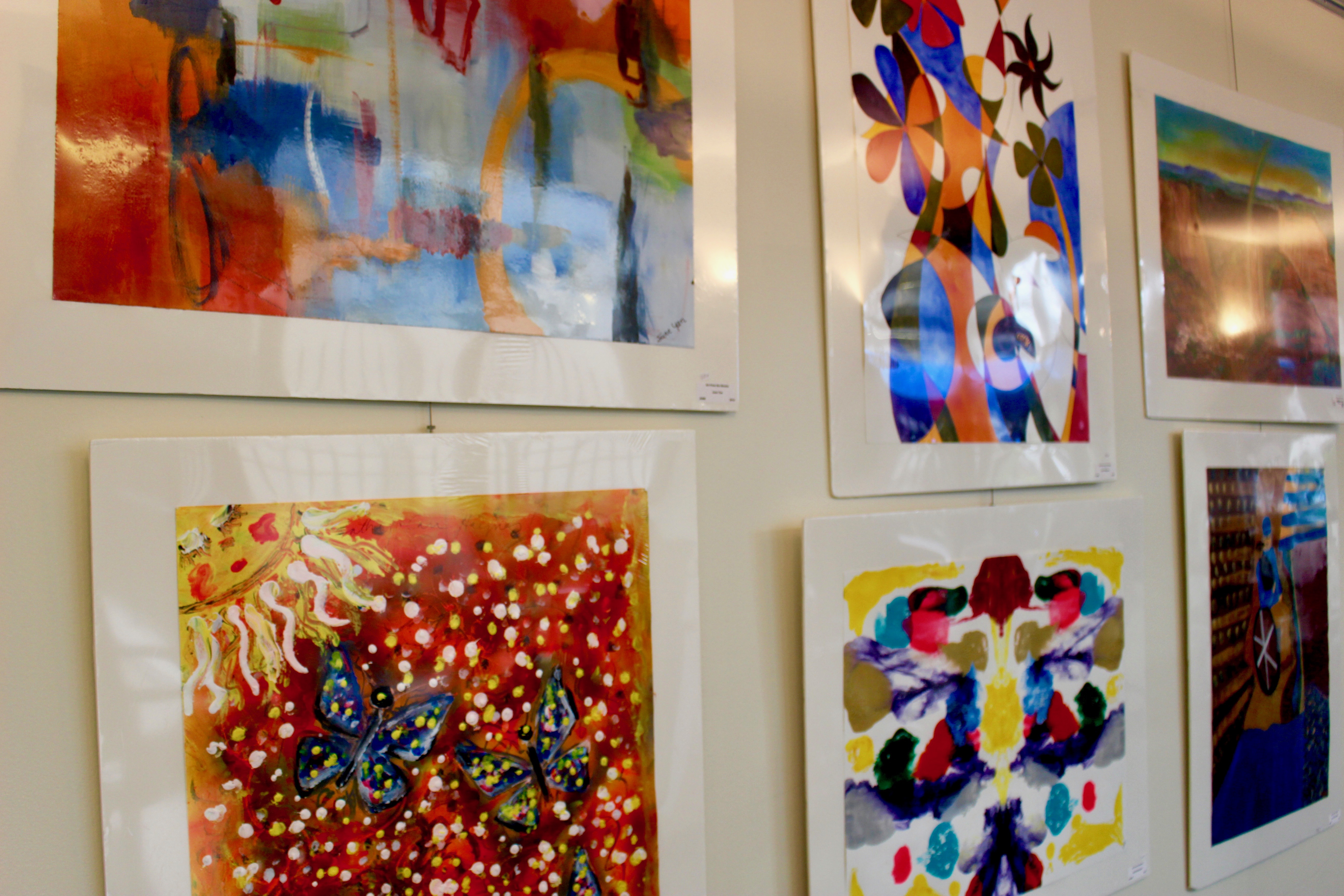 'Art From The Streets' keeps an ongoing display of art pieces at St. Davids Episcopal Church next to Holy Grounds coffee shop.

The artists are able to attend 3 free studio sessions each week while creating one-of-a-kind pieces all year long to prepare for the annual “Art From the Streets Exhibition Show”.

Last year’s 24th Annual Show and Sale at the Austin Convention Center brought over 1,200 people who purchased over $90,000 of art in the 10 hours they were open.

The show changed one artist’s’ life entirely. “I own a duplex on South Lamar now. I made enough money at the show last year to pay 2 years of rent,” Jerry Hurta said, “I have a lot of returning customers and people that have gotten to know me, I have a fan club at the art show each year now.”

The program does not only bring money and stability to the artists. It provides them with creativity and determination to belong to something in this world.

“At the time I had a broken heart and a lost soul, but the program was therapeutic for me.”

Cathy Carr lost everything she knew in a house fire and immediately was forced to live off of the streets. After hearing about Art From the Streets from a couple friends, she immediately fell in love with the program.

Carr’s painting subjects are usually animals because she feels they are independent and courageous. She hopes to open either an art or a music studio of her own one day to inspire others.

The artists create personal relationships with each other and the volunteers during the studio sessions and the annual exhibition show. Individuals that were once invisible are now seen as a local celebrity. Art From the Streets motivates their artists to be rewarded for their hard work and dedication all year.

The volunteers at the studio range in age from 20 to 70. Most of the volunteers have a passion for art and become truly inspired by the products the homeless or at-risk artists create.

The volunteers often have jobs in the St. David’s episcopal church which allow them to be on site and available for all of the art sessions. They like the consistent schedule and central location because it allows them to build strong bonds with the artists and serve as not only a volunteer, but as a friend.

Schumaker explains that a change in perspective can sometimes be all a person requires to get out there and help somebody in need.

At this year’s art exhibition David Schumaker is expected to have over 200 paintings on display. Schumaker now pays for his own apartment from his earnings for his art and never looks back at the life he once lived.

The Trinity Center is located downtown at 304 East 7th Street. Open studio times are Monday, Tuesday, and Thursday from 1:30 pm to 3:30 pm. 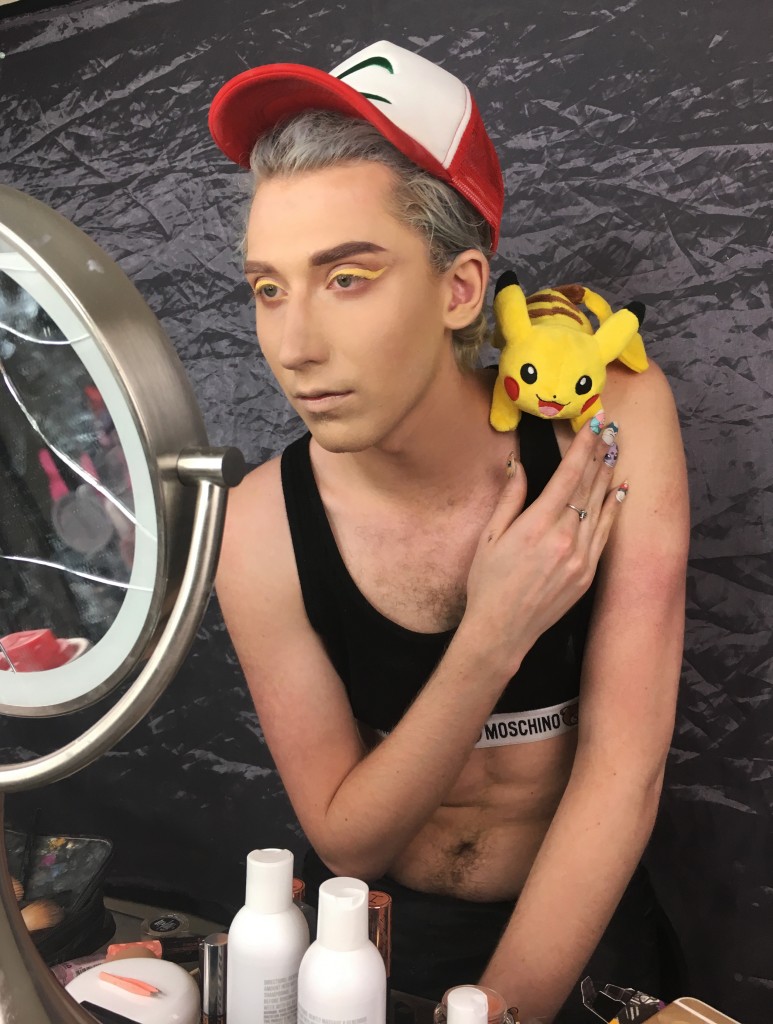 David Sternberg is a 21-year-old journalism major at the University of Texas at Austin who uses social media to realize his passion and influence society around him.

Sternberg has been interested in makeup since his senior year of high school, when he wanted his lips to be as pink as those of an actor in a movie he watched. When he didn’t have the courage to buy the lipstick himself, his friend stole it for him.

“When I wear makeup out and about I feel very powerful and strong,” Sternberg said. “I can influence other people. Whether you mean to or not, you still do, and that’s exciting.”

Sternberg created an Instagram profile in late 2015 to showcase his dazzling makeup designs to the world. He called his profile “Ultraviolent makeup,” based off the term coined in Clockwork Orange, which means violence simply for violence’s sake. Sternberg said he identified with the saying from an art perspective.

“I’ve always liked that (term) for art, saying … you just do art for the sake of art,” Sternberg said. “You don’t really have a message behind it; you’re just creating because you have to. I’ve always felt that way about myself; it’s just that I’ve never been good at any creative mediums.”

While Sternberg said he was unsuccessful in his previous attempts at music and painting, he finally found a way to express himself through makeup. His Instagram page has almost 100 thousand followers.

“I think getting some validation from social media that I might not be terrible at makeup is why I’ve stuck with this,” Sternberg said. “I’ve always wanted to do art – it’s just now this is the art that I’m doing.”

After one year, Sternberg’s Instagram page had only 8,000 followers, but started gaining more as he posted higher quality content. He said he switched from recording his videos with an iPhone to a DSLR camera and started being more creative.

His big payoff came during a “31 days of makeup” campaign he participated in last October, where he posted a new Halloween themed makeup design every day of the month. He gained 50,000 followers that month alone. 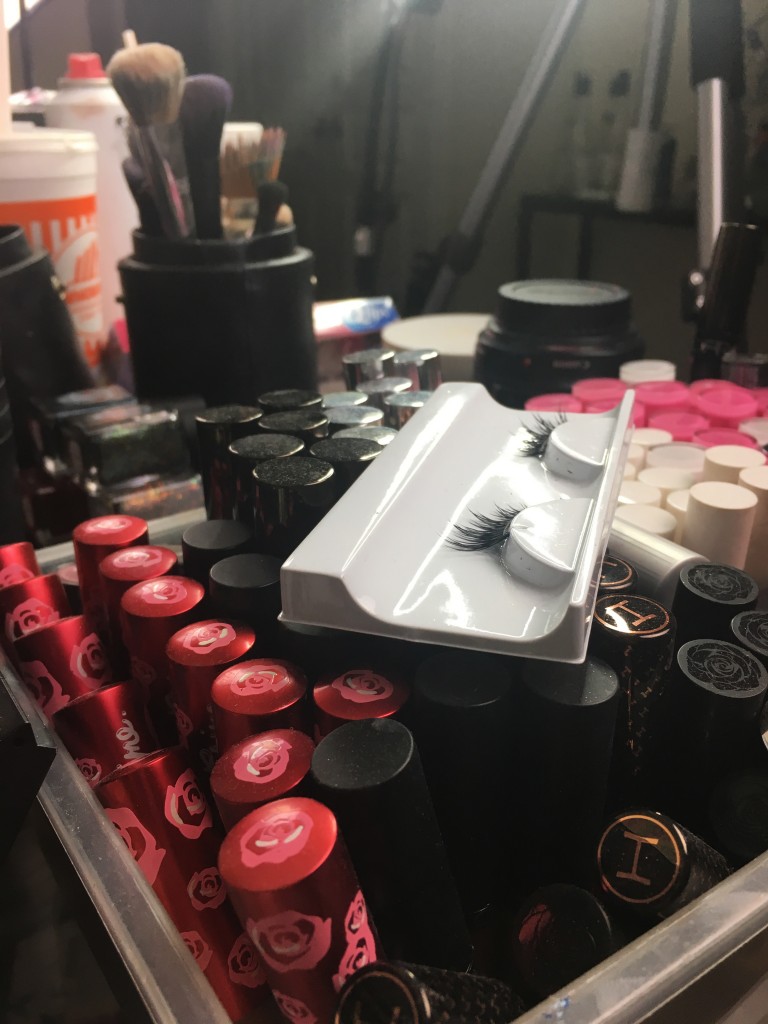 Instagram posts. He said he used to spend about $100 every three months on makeup, but because of these sponsorships, he hasn’t purchased any makeup in a year.

Robert Quigley is a social media journalism professor at the University of Texas at Austin. He said the way to create a great following on social media is to put out great content, pay attention to your production value, and understand the platform you’re using. After that, Quigley said, entrepreneurs can monetize their craft.

“There’s a way to make money for sure if you’re enterprising enough and you understand how to use social media well enough,” Quigley said.

Sternberg contributes much of his creative improvement, and the level of comfort he now feels with his artistic medium, to social media.

“I started off doing it by myself in my room completely alone,” he said. “Without strangers encouraging me to do what I do, I probably would not have gotten this far. Honestly, I probably would have quit a while ago, or just done bad makeup forever.”

Sternberg says the highlights of his career are the emails and messages he receives from men who say that Sternberg inspired them to wear makeup. Even with more and more men wearing makeup, Sternberg said most peoples’ negative attitudes toward the practice are not changing. However, he believes social media will force these negative sentiments to change in the future.

“Boys in makeup are a commodity for social media right now, and if a company wants to be young and hip then they need to include boys (in makeup),” Sternberg said. “So whether the people viewing that accept them or not, they’re still going to be viewing it regardless. So it doesn’t really matter how they feel, it’s still getting out there.” 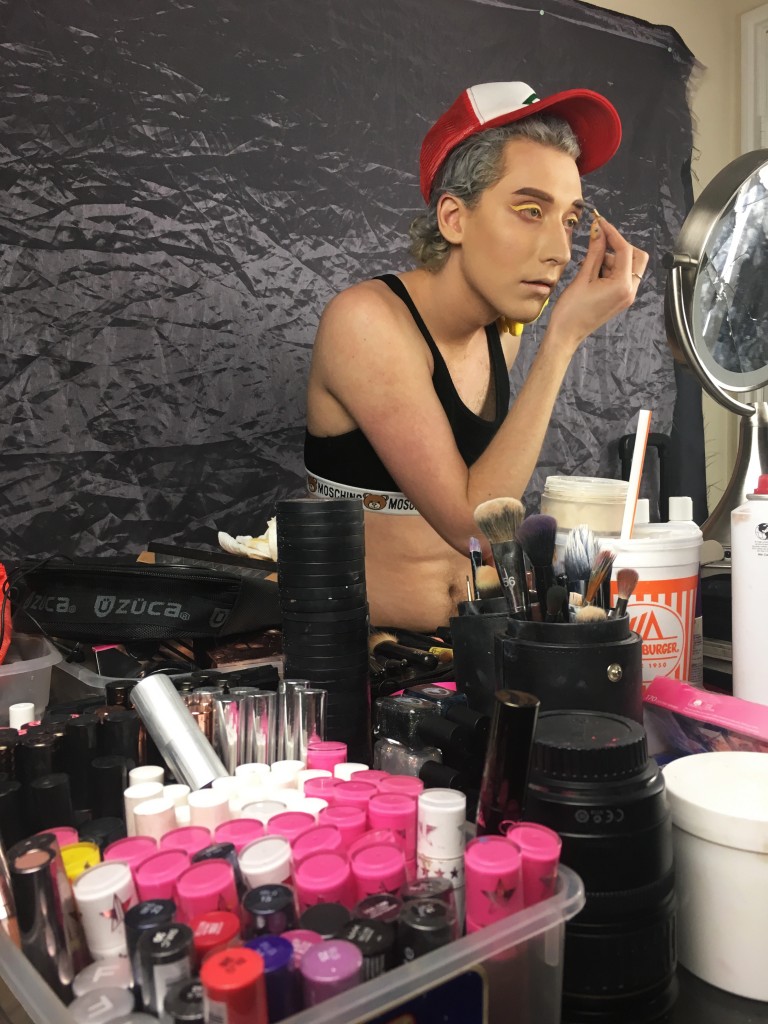 While Sternberg said that people will eventually become accustomed to men wearing makeup, he knows we are not yet at that level as a society. He said the greatest challenge of running his Instagram page are the hate comments he receives.

“You want to say they don’t affect you, but they do,” Sternberg said. “It’s just something you have to deal with, constantly.”

While many people would simply delete the negative comment, Sternberg takes a different route.

“I try to educate the person intelligently, because I don’t think that hate comes from a place of knowledge,” Sternberg said.

Sternberg said he doesn’t see the hate comments as a negative.

“Even if someone is leaving you hate and it hurts your feelings, you’re exposing that person to knowledge,” he said. “Because they are now seeing something that they are not used to, which is where hate comes from.” 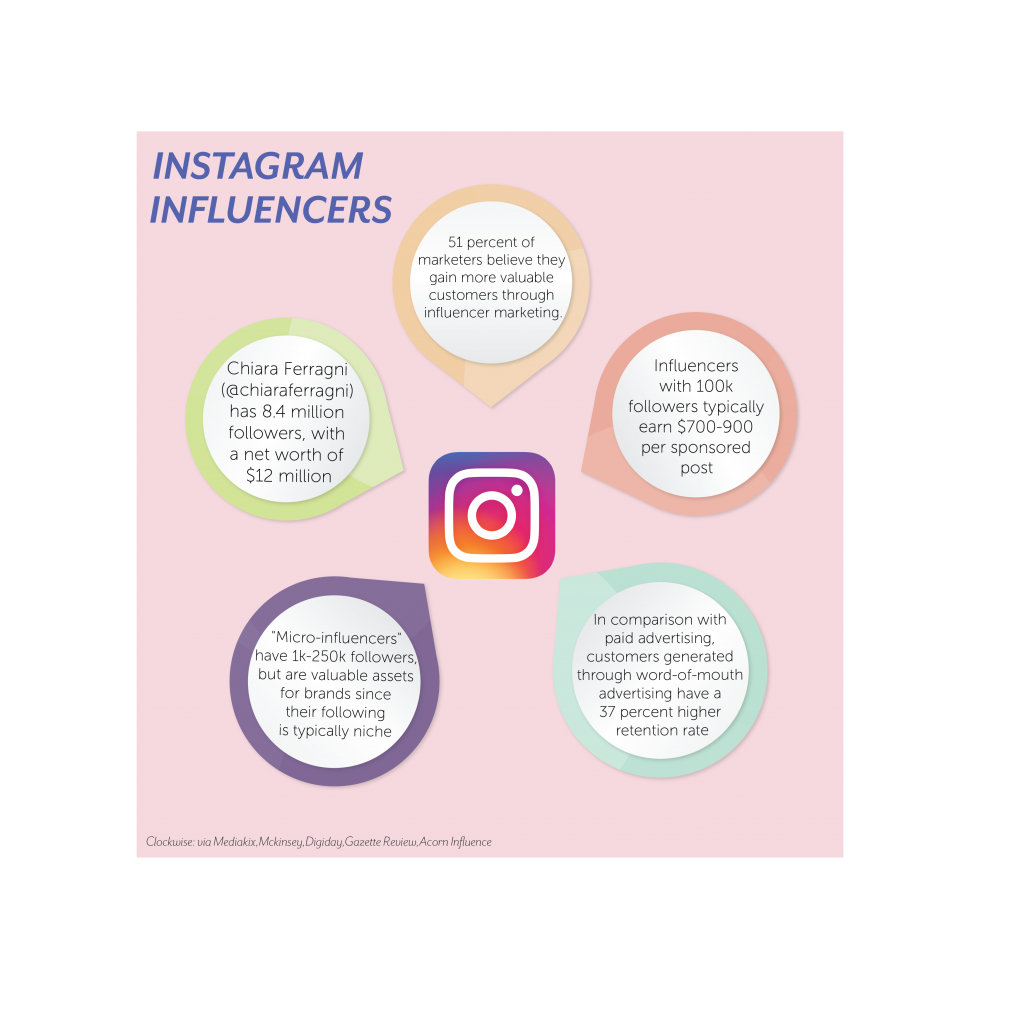