Witches Are Among Us 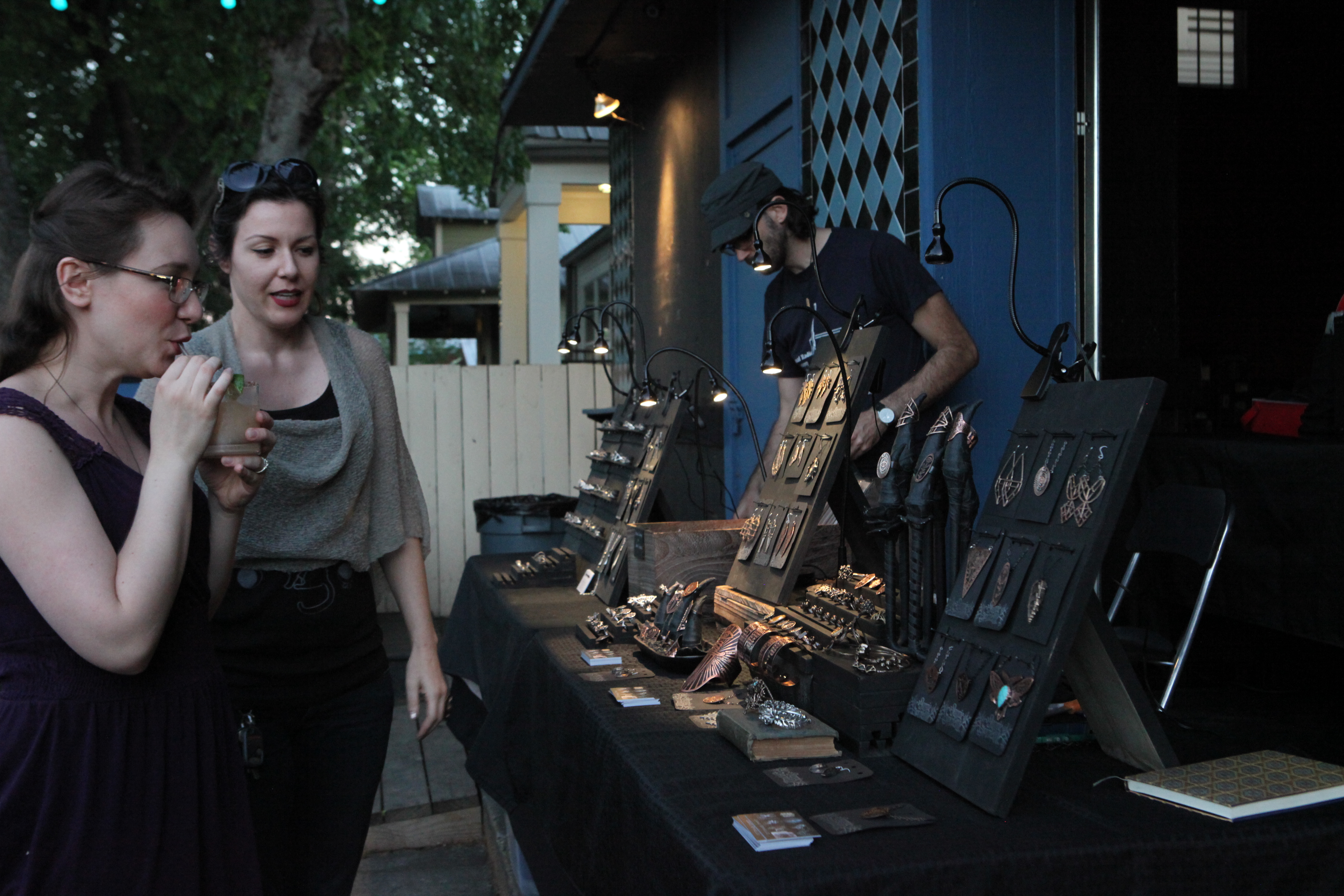 Customers at a vendors table 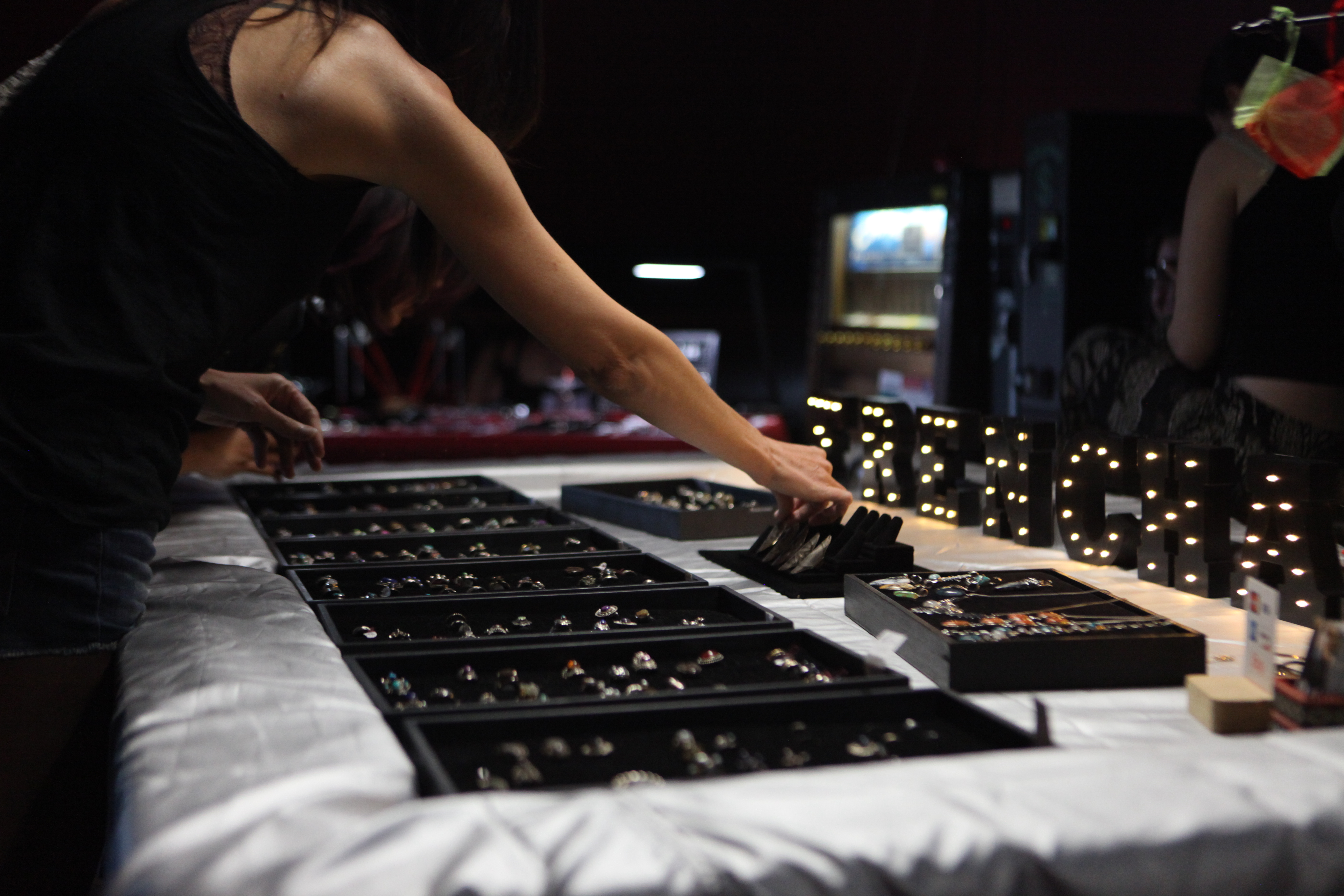 Jewlery on dislpay at the Witches Market 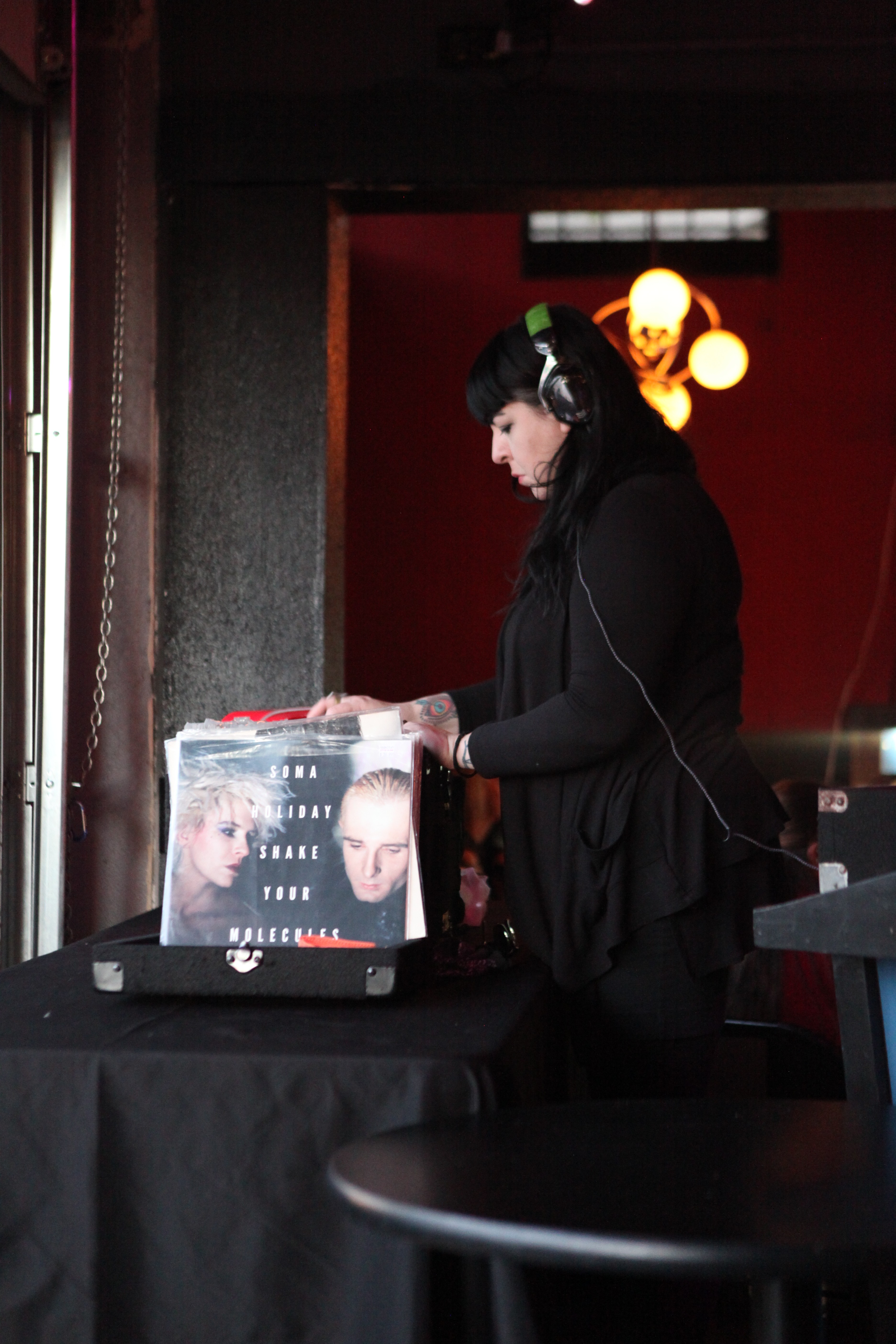 DJ at The Witches Market 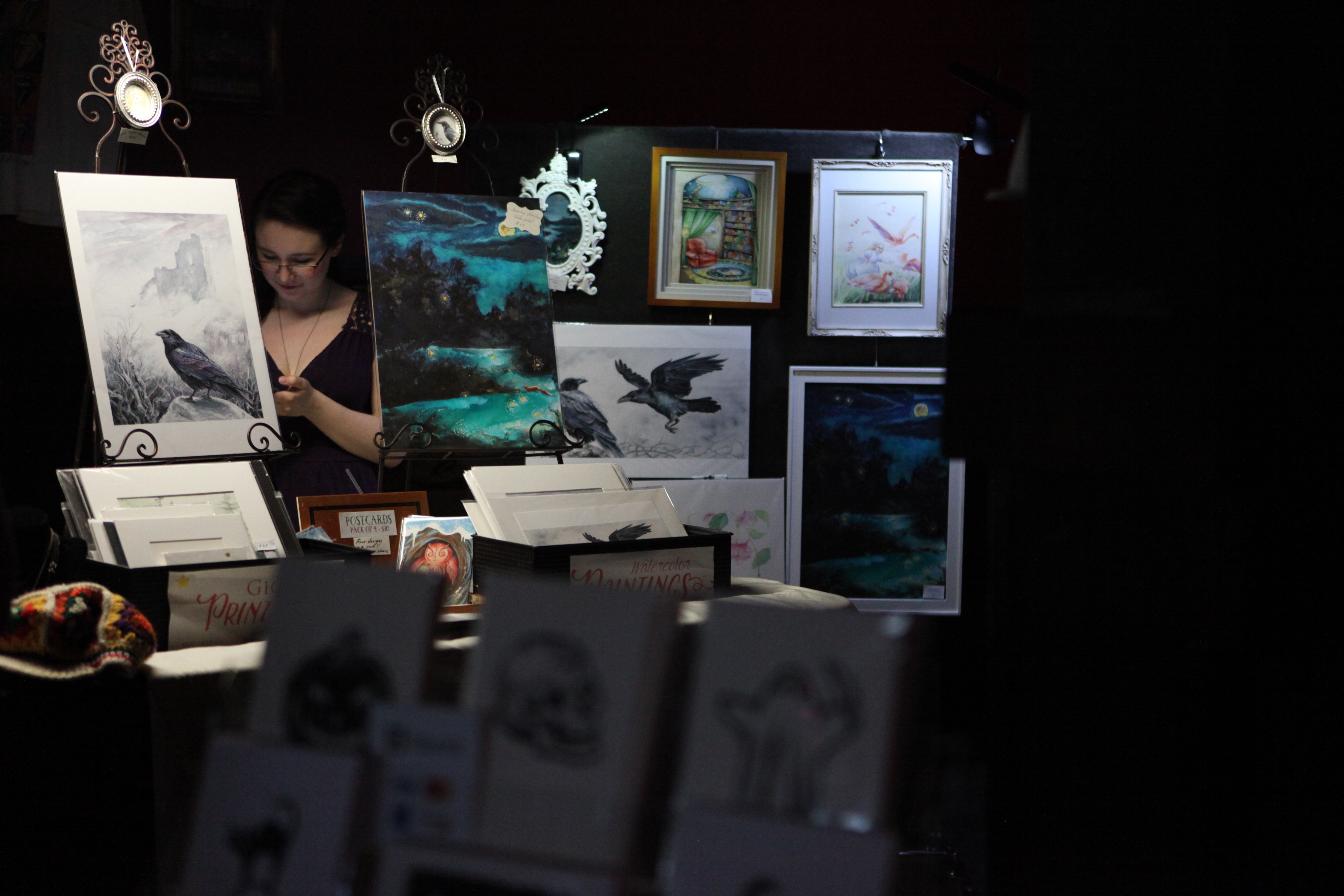 Art work for sale at the Witches Market 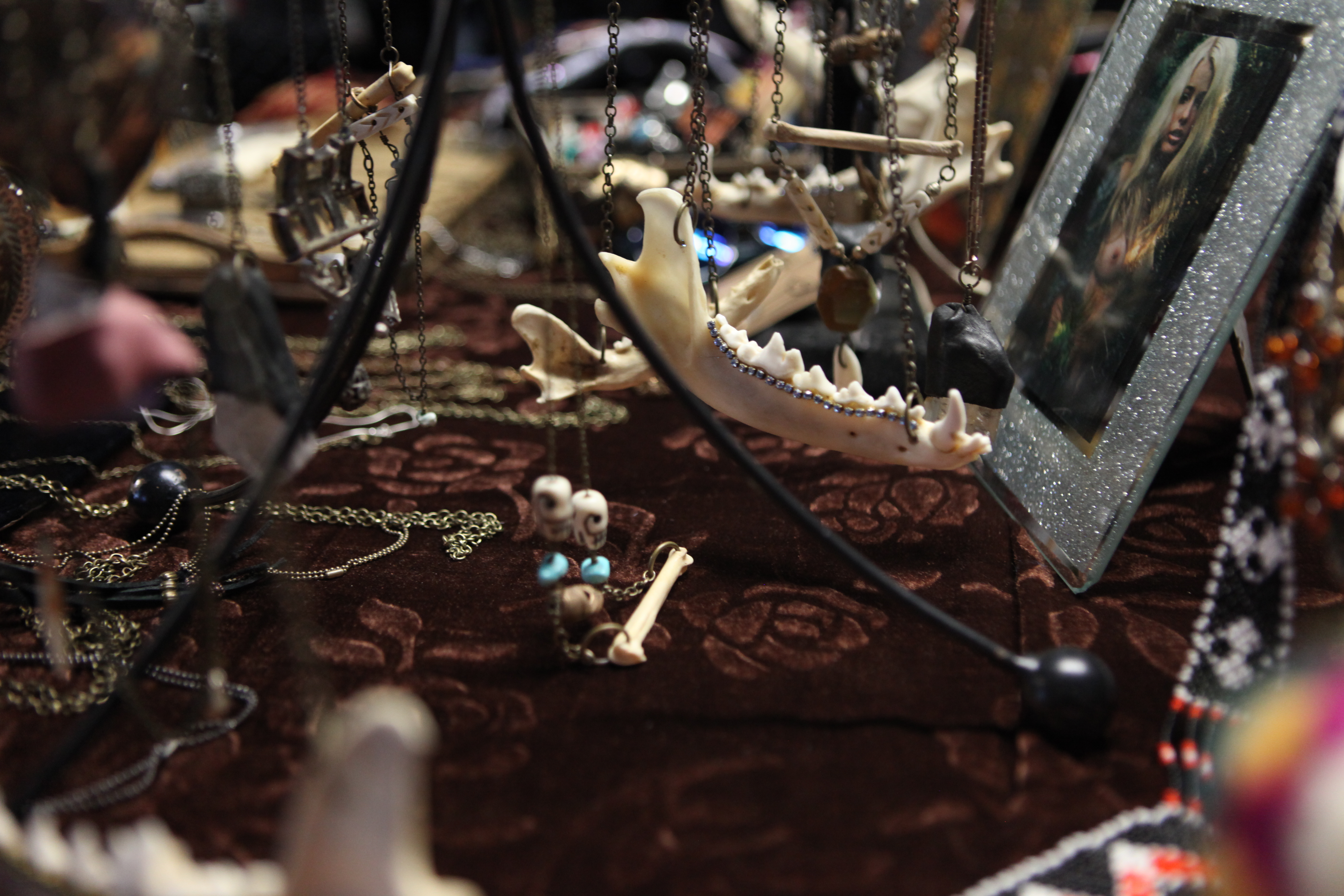 Hand made jerwlery at The Witches Market 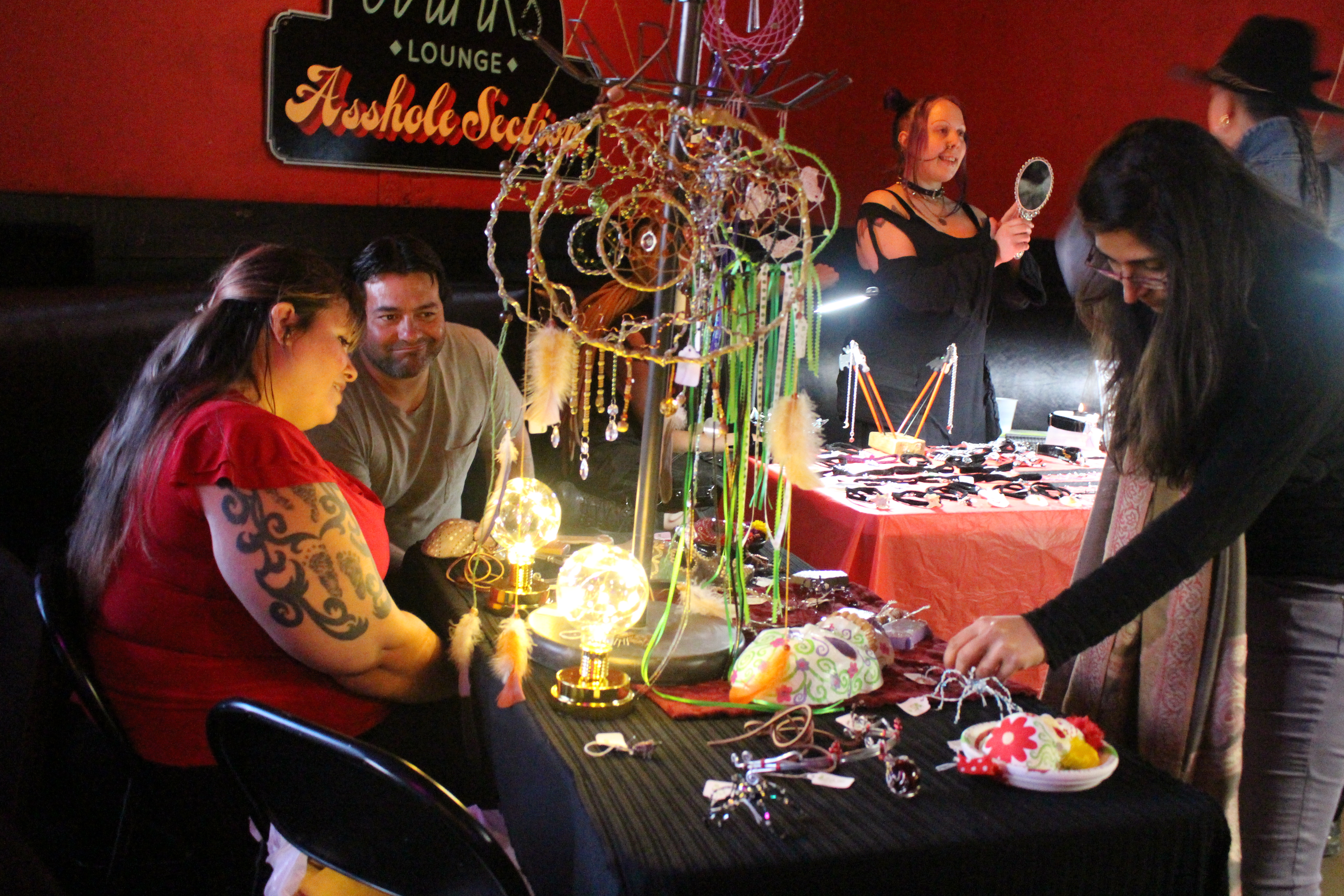 Kristi Lewis’s first forays into witchcraft began with dead animals. When she found pieces of bone or other animal remains on hikes, she would wrap the animal in wire the to preserve it and honor its characteristics.

“I was just drawn to the idea of rebirth in a way, that death isn’t the final end-all,” Lewis said.

In November, she started selling jewelry inspired by her pagan beliefs full-time through Etsy and pop-up shops. One day when she was vending her jewelry at Independence Brewery, a woman saw her and pulled her children away, warning them to stay away from witches. Another woman and witch herself, Jessica Beauvoir, approached Lewis and invited her to join Austin Witches Circle, a creative collective for “witches, pagans & magical folk.” 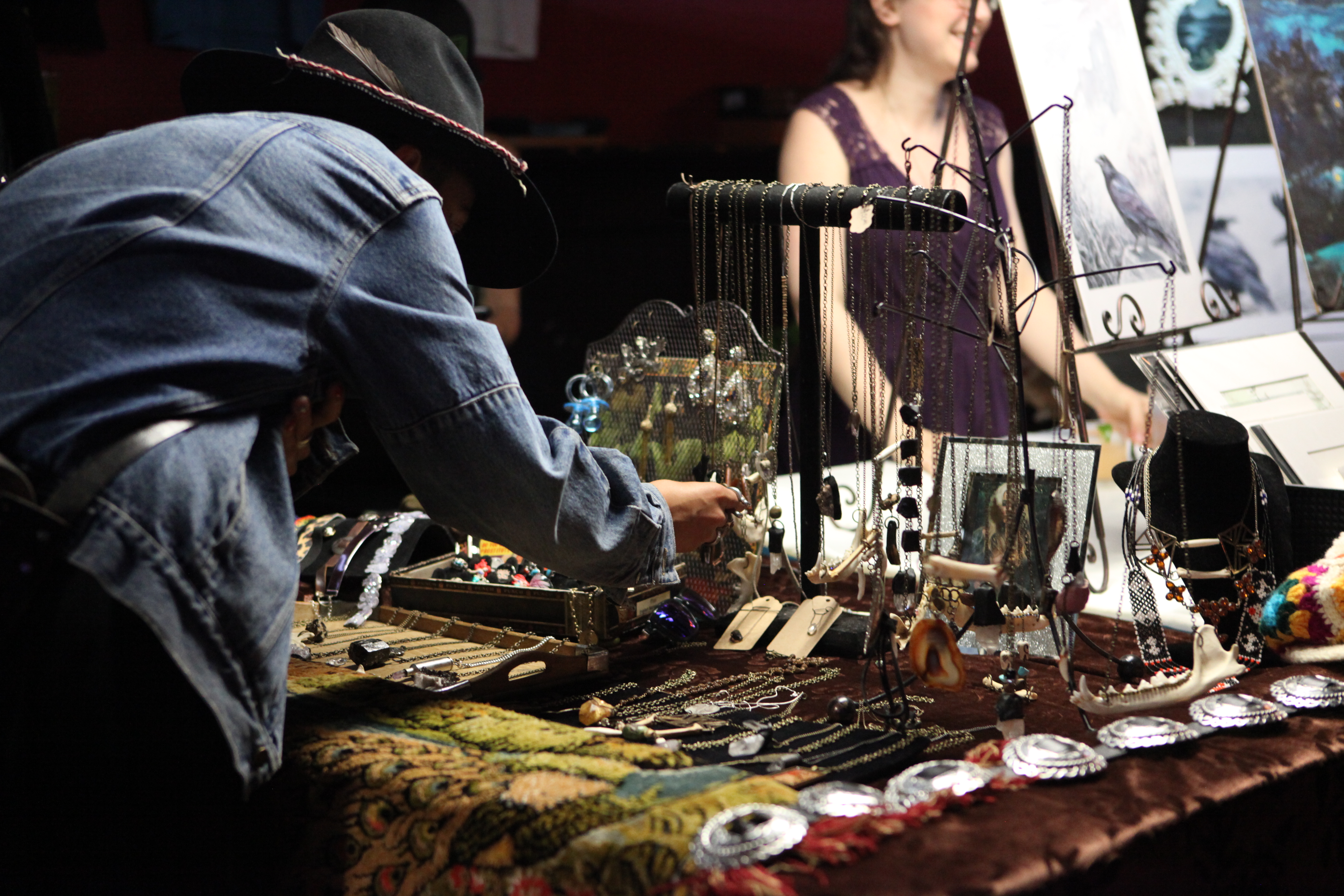 Sammy Goodtime has been a vendor with Austin Witches Market for about six months. 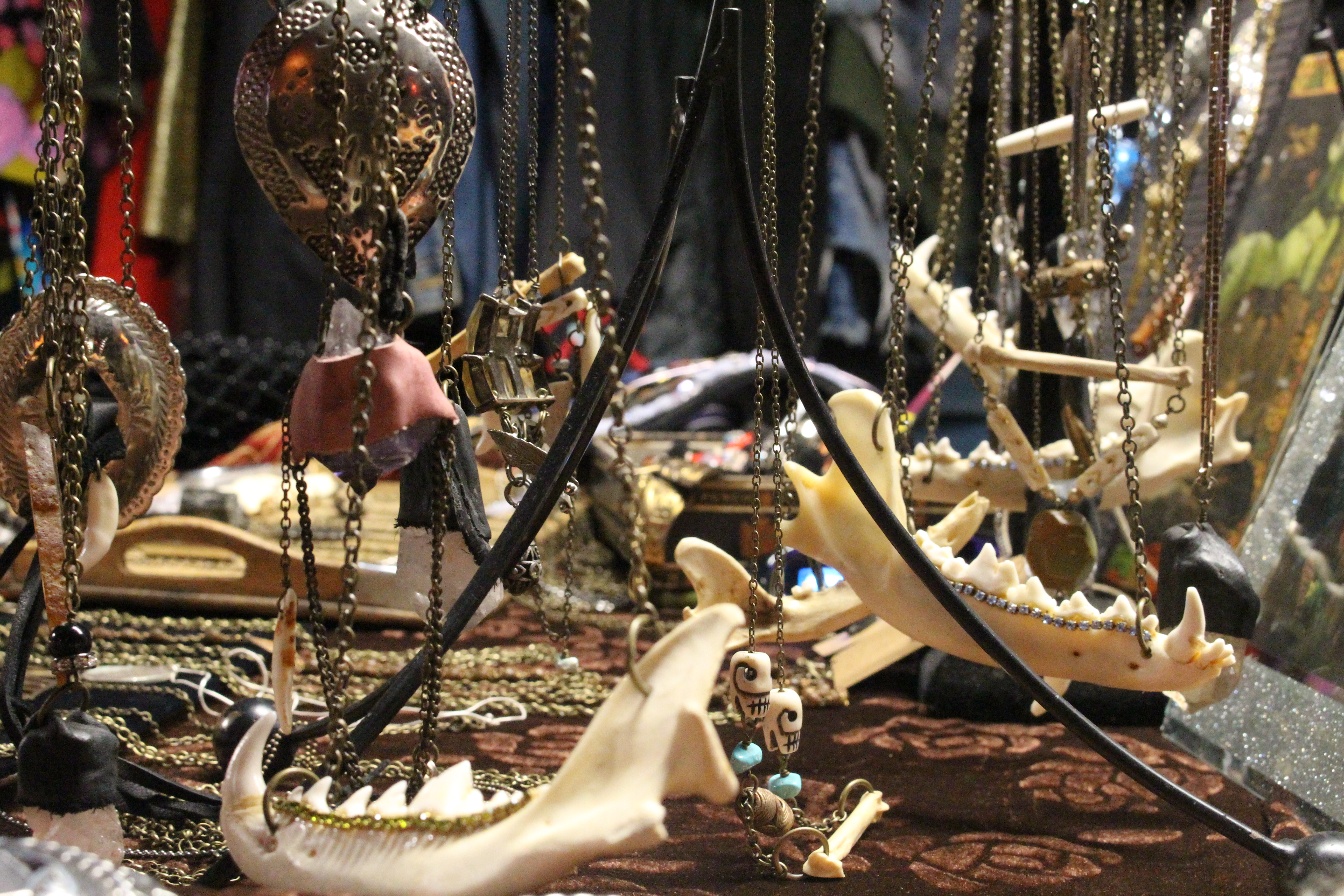 Sammy gets her jawbones from a taxidermist, "I just got a box of all sorts of bones and skulls," said Sammy.

“[Austin Witches Circle] is an opportunity for local witchy folks who make things to try and make a living selling or supplement their livelihood doing something they love,” Beauvoir said. “It also helps bring people together. We are always interacting with each other and being inspired by each other.”

Three to five times a month, Austin Witches Circle puts on markets where witches and non-witches can sell goods such as potions, amulets and jewelry. They also host occasional workshops and spiritual events like Sabbats, festivals that mark dates of seasonal or agricultural importance. 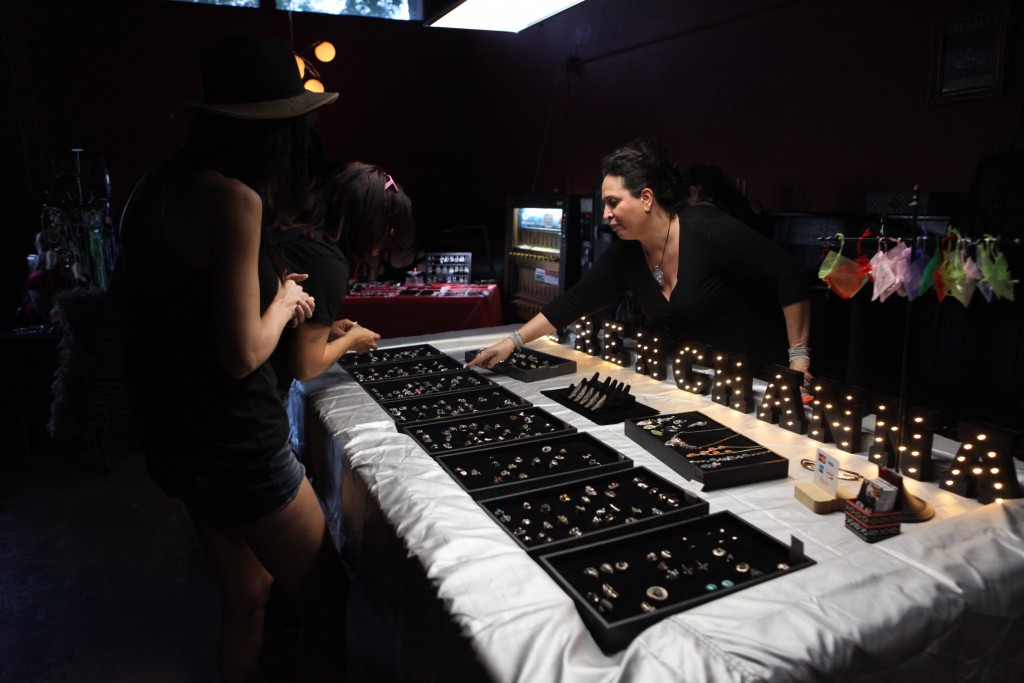 Austin Witches Circle allows dark-art vendors to sell their crafts without judgement or skepticism they would receive at other art markets around town. When Beauvoir began selling teas and herbs around Austin, she faced some difficulties finding the right place to sell them. She founded Austin Witches Circle to bring together people with similar interests in witchcraft and art.

Though there is no requirement to be a witch to vend at Austin Witches Circle’s markets, Beauvoir says the vendors’ crafts share underlying themes, such as alternative spirituality and reverence for nature. According to Beauvoir, no specific belief or practice makes a person a witch.

“I think what makes a witch is when they identify with that word and figure out what it means to them,” she said. “I wouldn’t say there is any one characteristic that all witches share.”

Beauvoir uses herbalism to practice her witchcraft.  She identifies a secular chaos witch, meaning she uses her belief itself as a tool. Beauvoir says believing in something is what gives it power, so her beliefs can adapt depending on her needs. If she wanted to cast a spell that required belief in a particular deity, she would believe in that deity for the duration of that spell.

According to Cedar Stevens, another member of Austin Witches Circle, Austin has a large witch and pagan community, and though most witches are women, though there are some men as well. Many witches are quite discreet.

“You can’t throw a rune without hitting a witch in Austin,” Stevens said.

Stevens, a former atheist and scientist, now identifies as a witch and as “Wicca-ish.” She followed a trail of books from native plant landscaping and gardening, to agriculture, to herbal medicine and eventually to magical herbalism. Stevens was skeptical about magical herbalism at first, but found it to be her calling and soon started selling oils and incenses based on plant magic through her store, Natural Magick Shop.

Witchcraft is a practice, not necessarily a belief. Witches create from materials provided by the earth. They can choose to believe in pagan spirits or gods, something else or nothing at all.

According to Chris Godwin, acting clergy at a pagan congregation, Hearthstone Grove, witchcraft is the practice of pagan beliefs.

Godwin’s congregation practices Druidism, the second largest pagan religion in the United States after Wicca. Godwin’s Druid congregation focuses on traditional Irish gods and practices. They recite prayers in Gaelic, and rituals feature fires where congregants place offerings such as alcohol. Their community practices a kind of witchcraft that focuses on herbalism. Godwin says he’s skeptical of the efficacy of witchcraft, so he doesn’t practice it often.

“[Witchcraft] is kind of like prayer,” Godwin said. “It’s for when you have no agency left, and you must find some form of agency, some way to express and get out of the psychological state of being in need or being frustrated.”