While most college students nearing graduation are busy envisioning the lifetime ahead of them, Anayeli Marcos and Samuel Cervantes can’t see past the next three years.

Marcos, a graduate student studying social work and Latin American Studies, and Cervantes, a junior government major, are both undocumented students at the University of Texas at Austin. They are “Dreamers,” or recipients of the Deferred Action for Childhood Arrivals program. As the status of DACA hangs in the balance, Marcos and Cervantes are preparing for an uncertain future.

DACA is a remnant executive order from the Obama administration that was signed into law in 2012. The program, under very specific circumstances, grants undocumented children who were brought to the United States before June 12, 2007 some benefits otherwise unavailable to undocumented people like a driver’s license, work permit and social security number. Recipients must renew every three years or risk deportation.

Since President Donald Trump was elected in 2016, maintaining DACA has been an uphill battle. The president officially rescinded DACA on Sept. 12, 2017, blocking all renewals/new applications that were sent after Sept. 5. However, the repeal was short-lived. On Jan. 9, 2018, a federal judge from California ruled that the Trump administration was required to resume DACA renewals. Weeks after the court’s decision, the government shut down after failing to finalize the budget, including funds for DACA.

“The fact that a lot of people are actually losing their status right now is very daunting,” Marcos said. “My mom has asked me a lot [of questions] like “what are you going to do?” I don’t have the answers for her.”

Congress agreed to end the shut down without making any progress on immigration. If the government does not reach a deal by March 5, Dreamers like Marcos and Cervantes could be deported back to Mexico.

“It’s not far fetched to say that ICE can come in with their warrant and that someone who is undocumented could be deported,” Cervantes said. “That’s a true reality that undocumented people have.”

Pieces of the journey have stayed with Marcos: the river they had to cross, the “coyotes” or smugglers that separated her from her mother, and the moment she saw her father for the first time. Cervantes cannot remember as much. He only recalls the bright lights of Pasadena, Texas, and the difficult transition into a new life that followed.

“I think what I remember the most is going to school for the first day and not knowing English,” Cervantes said. “I knew how to speak Spanish, but I was also learning English. It was hard for me to balance.”

Marcos and Cervantes didn’t become fully aware of their status until they got older and realized they were missing out on certain rites of passages, like getting a driver’s license or a part time job. Marcos and Cervantes received DACA in 2014 and 2012, which helped make these things possible for them, but the process is ongoing and difficult. 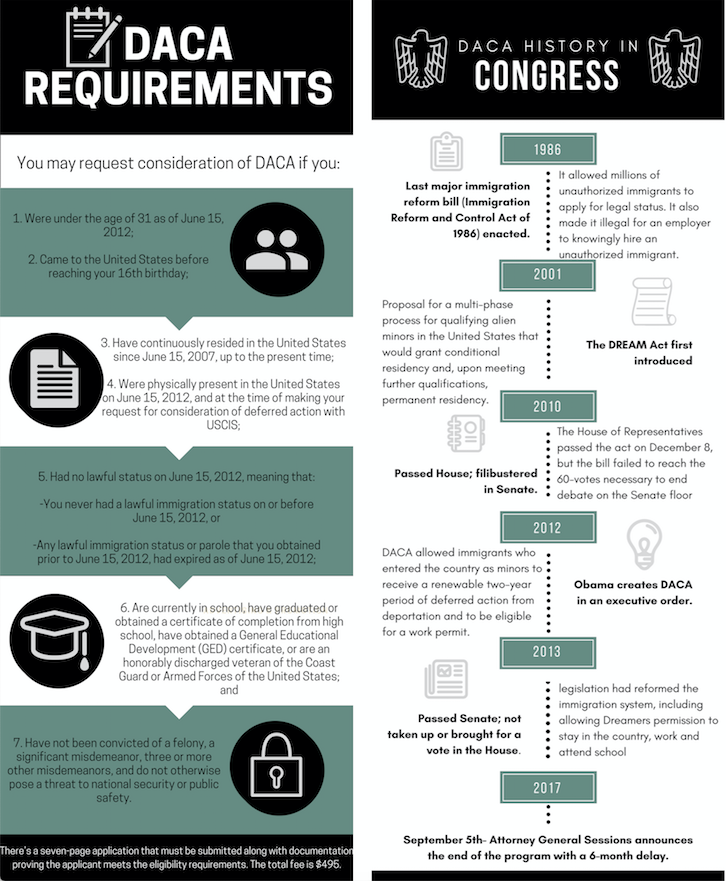 Johana De Leon, a paralegal community advocate at the Equal Justice Center, a small firm that has taken in over 3,000 DACA cases, said that the process for securing DACA has always been strenuous.

Although DACA allows undocumented students to legally live and work in the U.S., Marcos and Cervantes still receive backlash when they are open about their citizenship status. From threats on Twitter to conversations with supervisors, it’s often hard to gauge how people will react.

“One of the things that I really struggled with was admitting my status to my [academic] advisor,” Marcos said. “I couldn’t really tell her because I didn’t know if she was open to undocumented students. I didn’t want my academic advisor to hate me.”

Marcos eventually opened up to her advisor and received the resources she needed. Support for undocumented students on campus has been instrumental to Marcos and Cervantes’ success and survival. The Monarch Program, an organization dedicated to creating a community where undocumented students can thrive by providing mentors and academic assistance, is one of the main resources for DACA students at UT Austin.

“What we see the of most is financial assistance, textbook assistance, or tutoring assistance,” Monarch Program director Rodolfo Jimenez said. “And then, once they trust us, they’re able to open up a little bit more. [I hope] they feel that they have another home here.”

The Monarch Program is able provide resources for undocumented students, mostly through donations. But much like the status of Dreamers, Monarch’s future is also in limbo. The program is scrambling to figure out what its next move will be.

“We discussed this last time when the government shutdown and they opened back up again,” Jimenez said. “There was nothing about [DACA] or anything included. We put out [a statement], and we were hesitant because we know it’s going to come up again.”

The Equal Justice Center also feels the pressure. Since the court decision in January restarted the renewal process, Johana said the firm has been trying to help as many applicants as possible, as long as renewals are available.

“Since the court decision came out, we’ve gone all sorts of crazy,” Johana said. “Since then we’ve had over 80 clients come in. Every day I talk to DACA clients. When I’m not on the phone, I’m having client appointments.”

As of now, Marco’s DACA status will expire in April, just a month shy of graduation. After opening up to her supervisor, she thinks she will be able to keep her job for the remainder of the semester. Being honest about her status and asking for help, Marcos said, has been the key in navigating this difficult time. 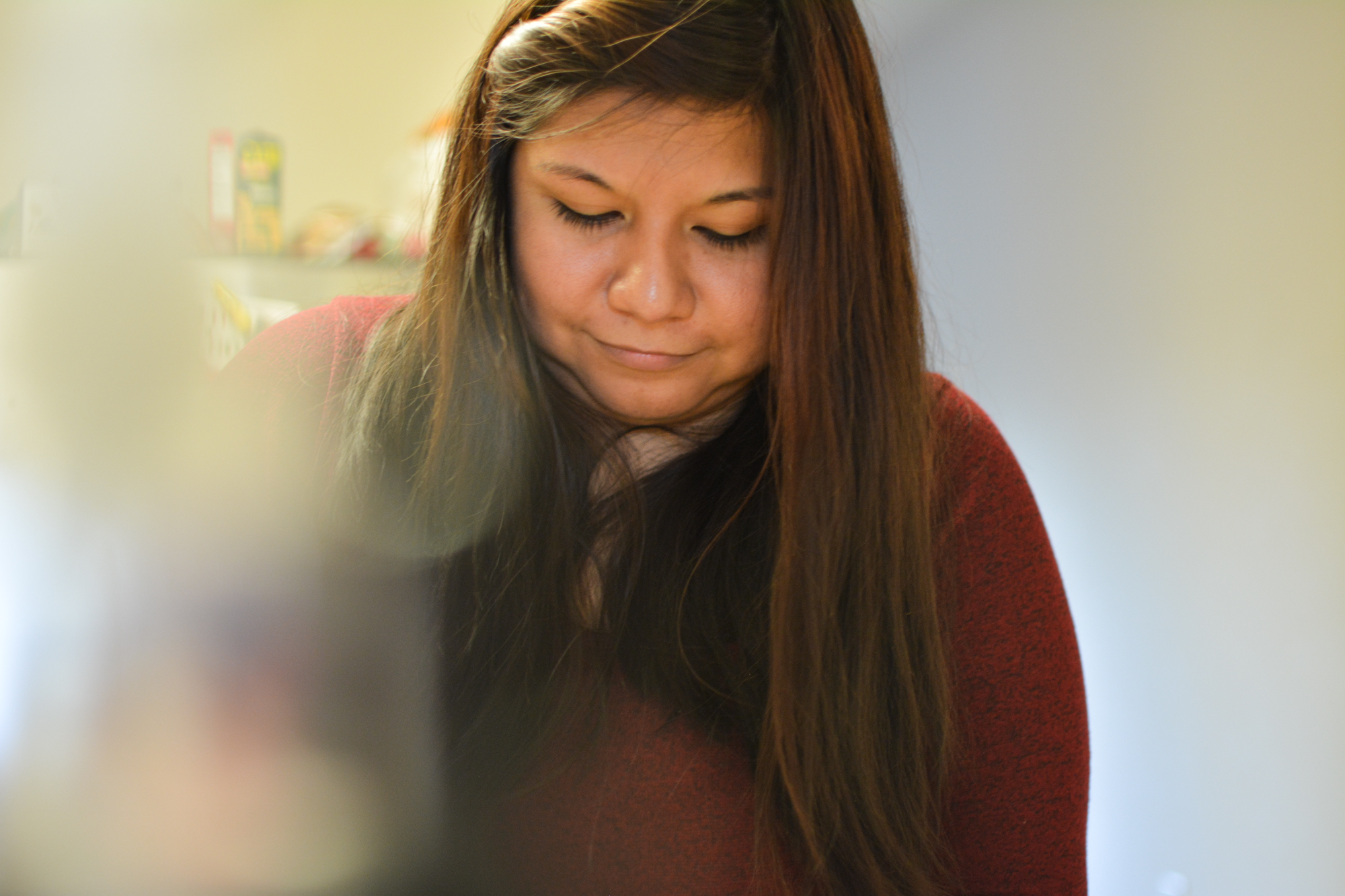 Anayeli Marcos pictured in her home on February 11, 2018. Marcos is a graduate student who is currently in the United States under the DACA program. 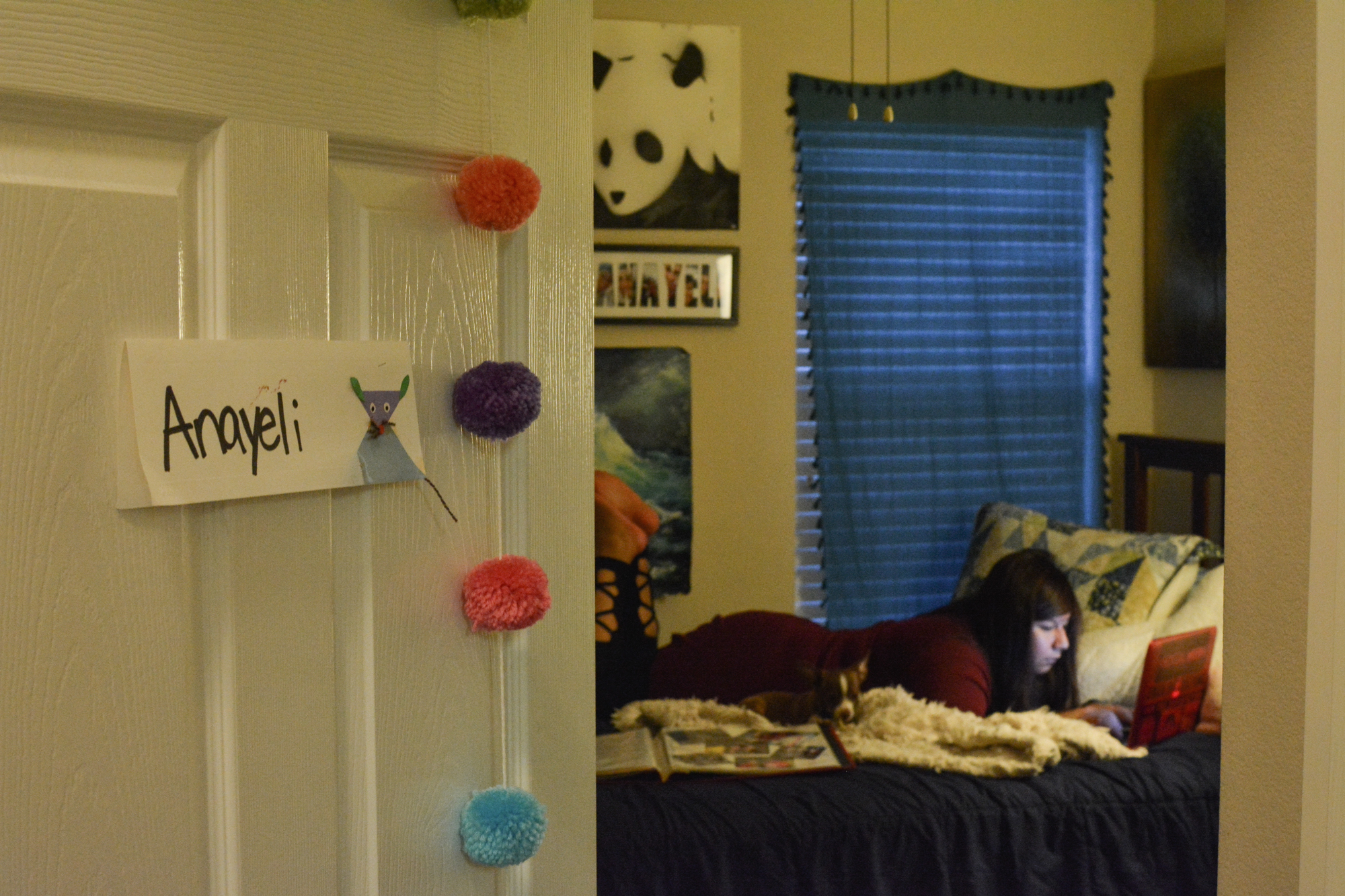 Marcos, who has been in the Untied States since she was 6, has made a home here. 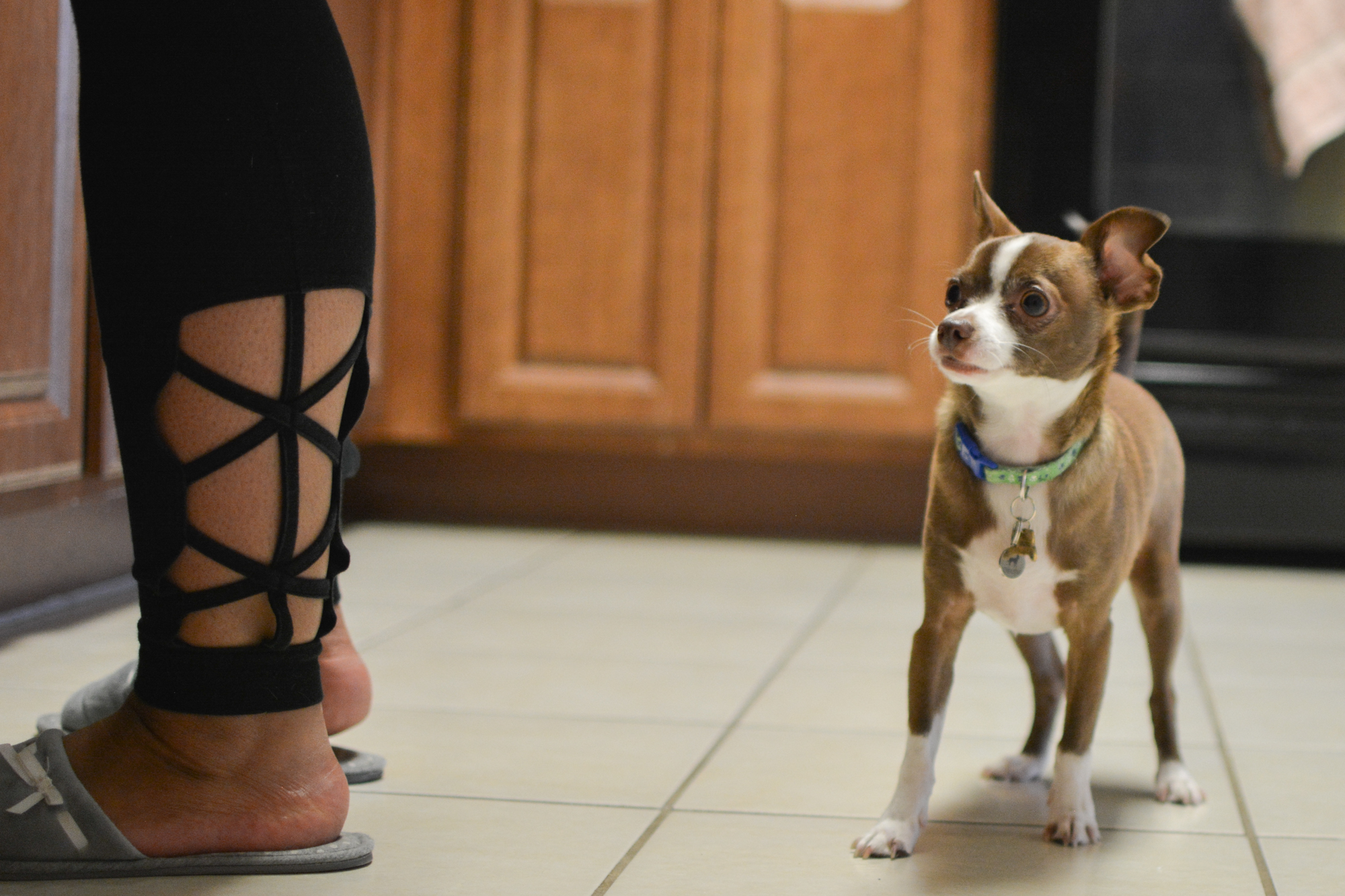 Marcos's adopted her dog about a year ago from Austin Pets Alive; her dog can normally be found right behind Marcos whenever she is home. 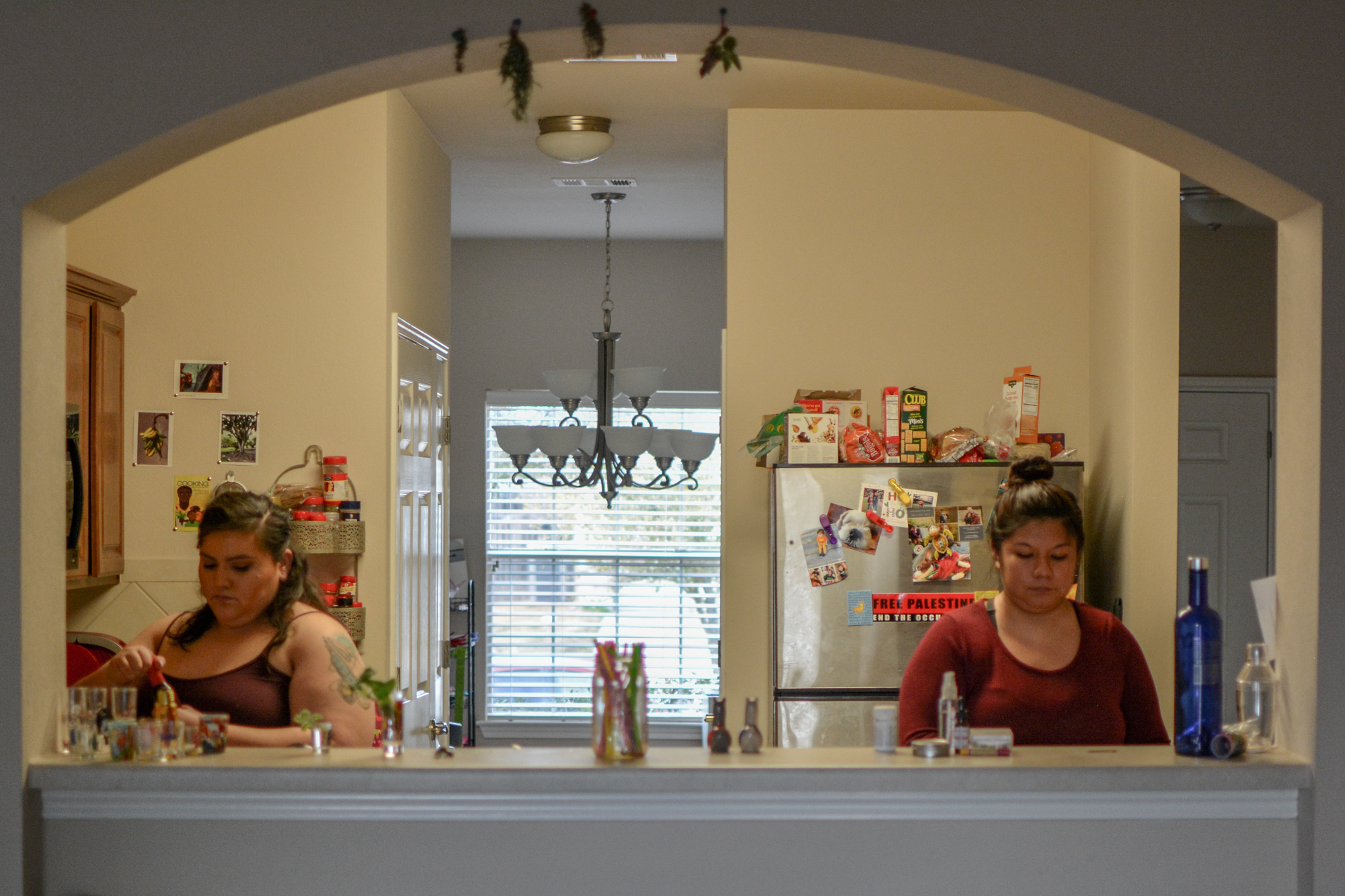 Marcos's lives with two other students in a house about 25-30 minutes away from campus. 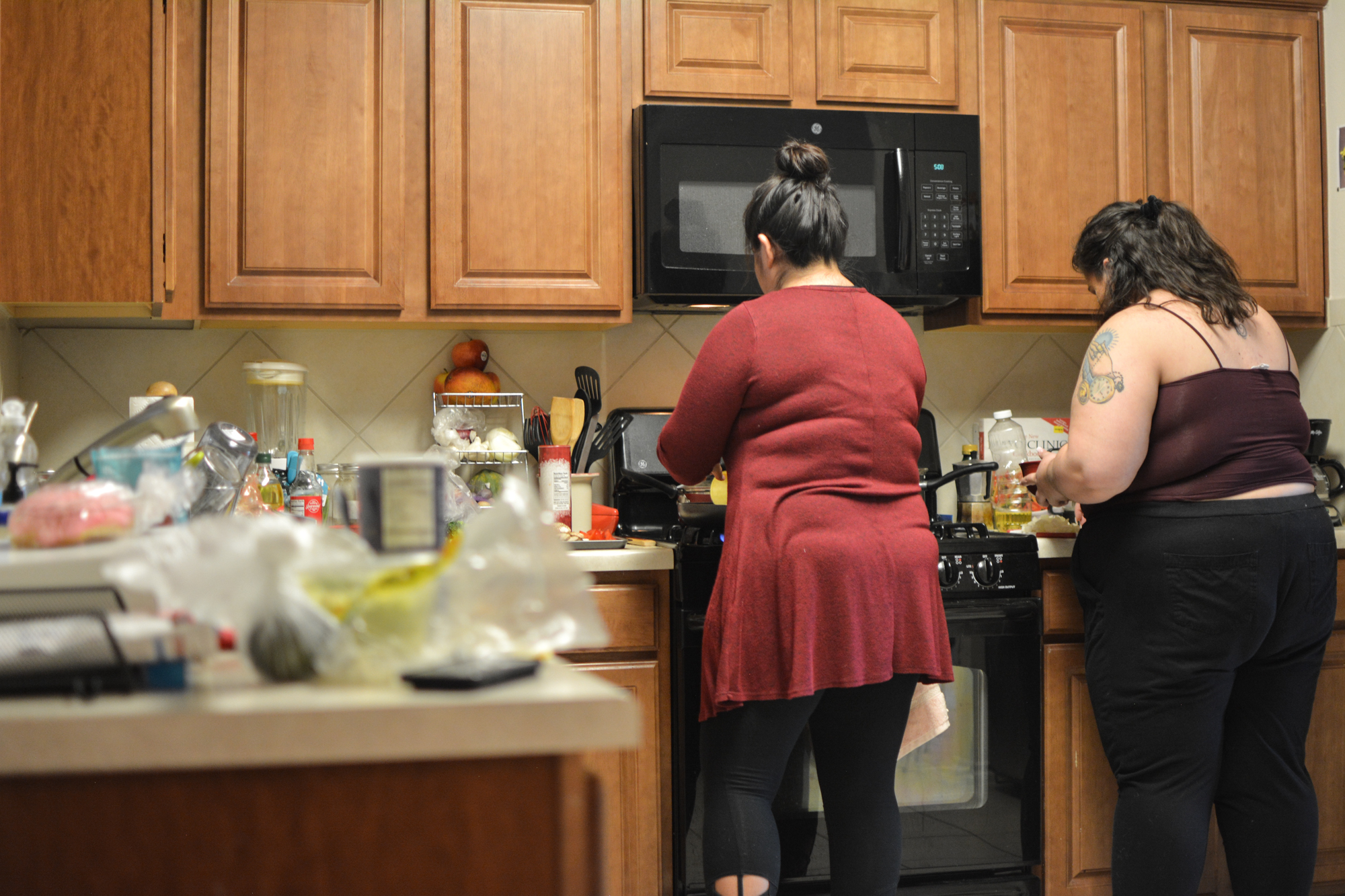 Marcos spends her Sunday meal prepping for the week with one of her roommates. 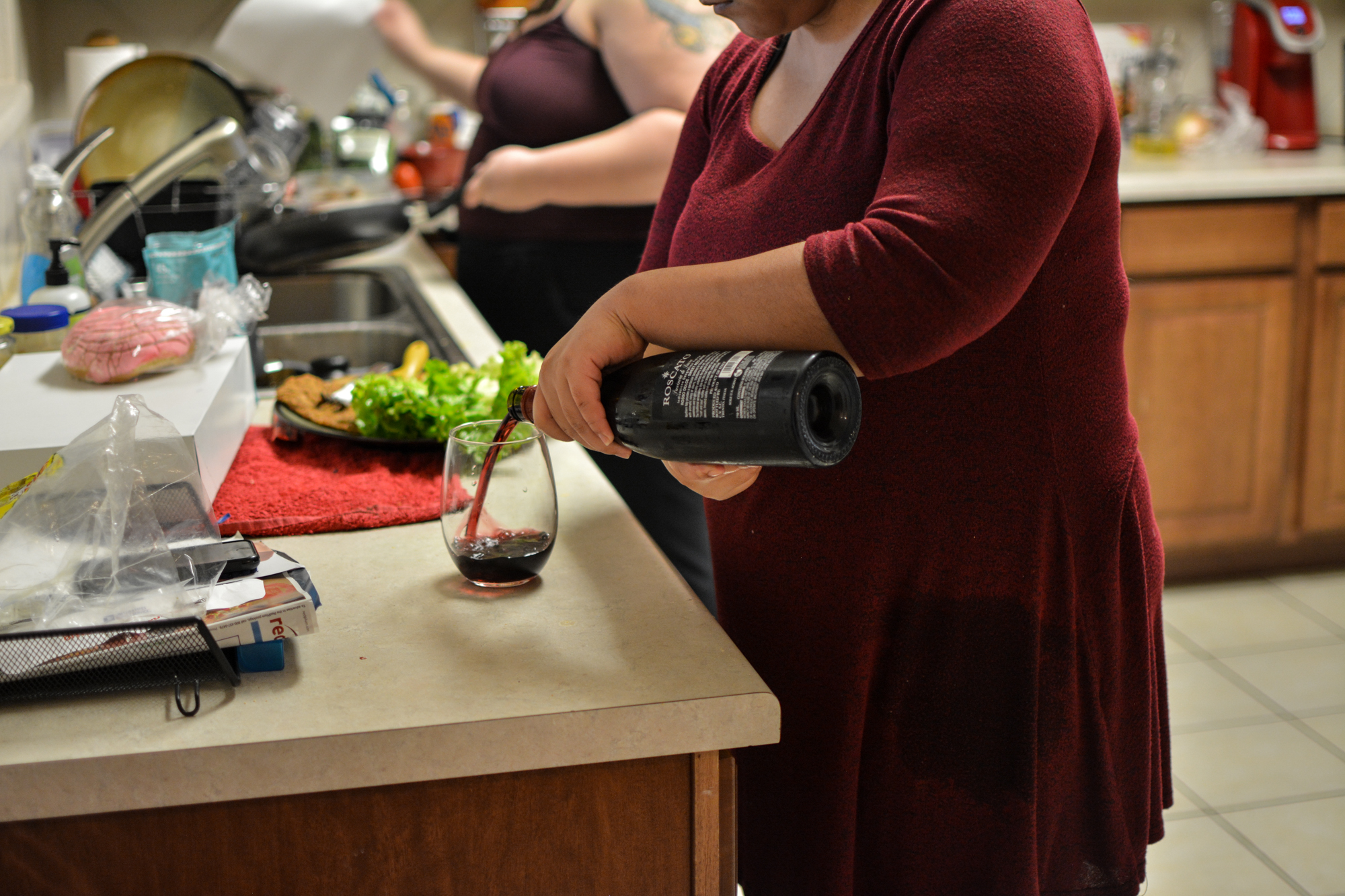 Marcos has been open to the public and a visible face when speaking out about DACA and the future of the program. 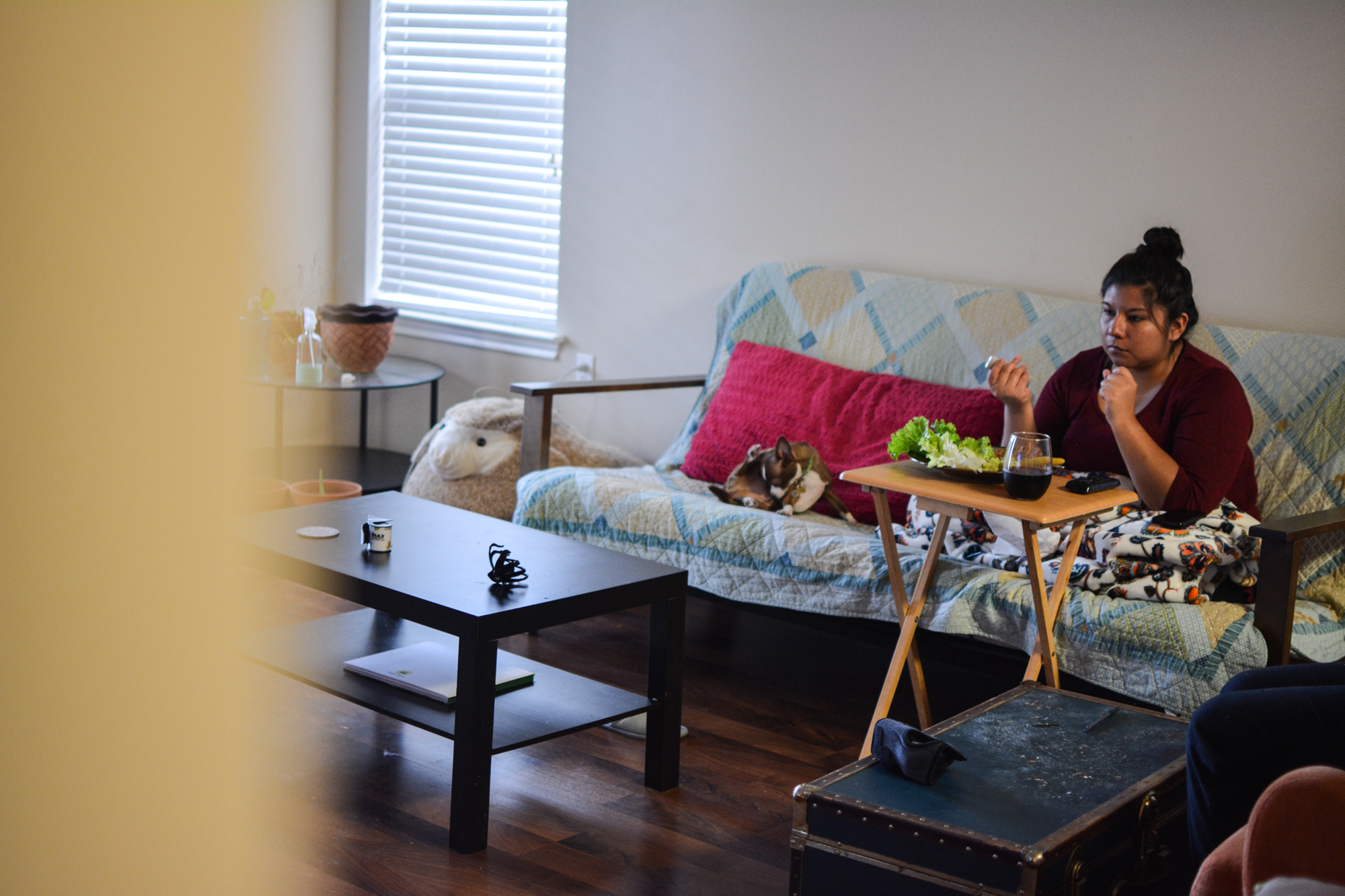 Marcos sits down for a meal and anime with her companion by her side after a day of grocery shopping and meal prepping. 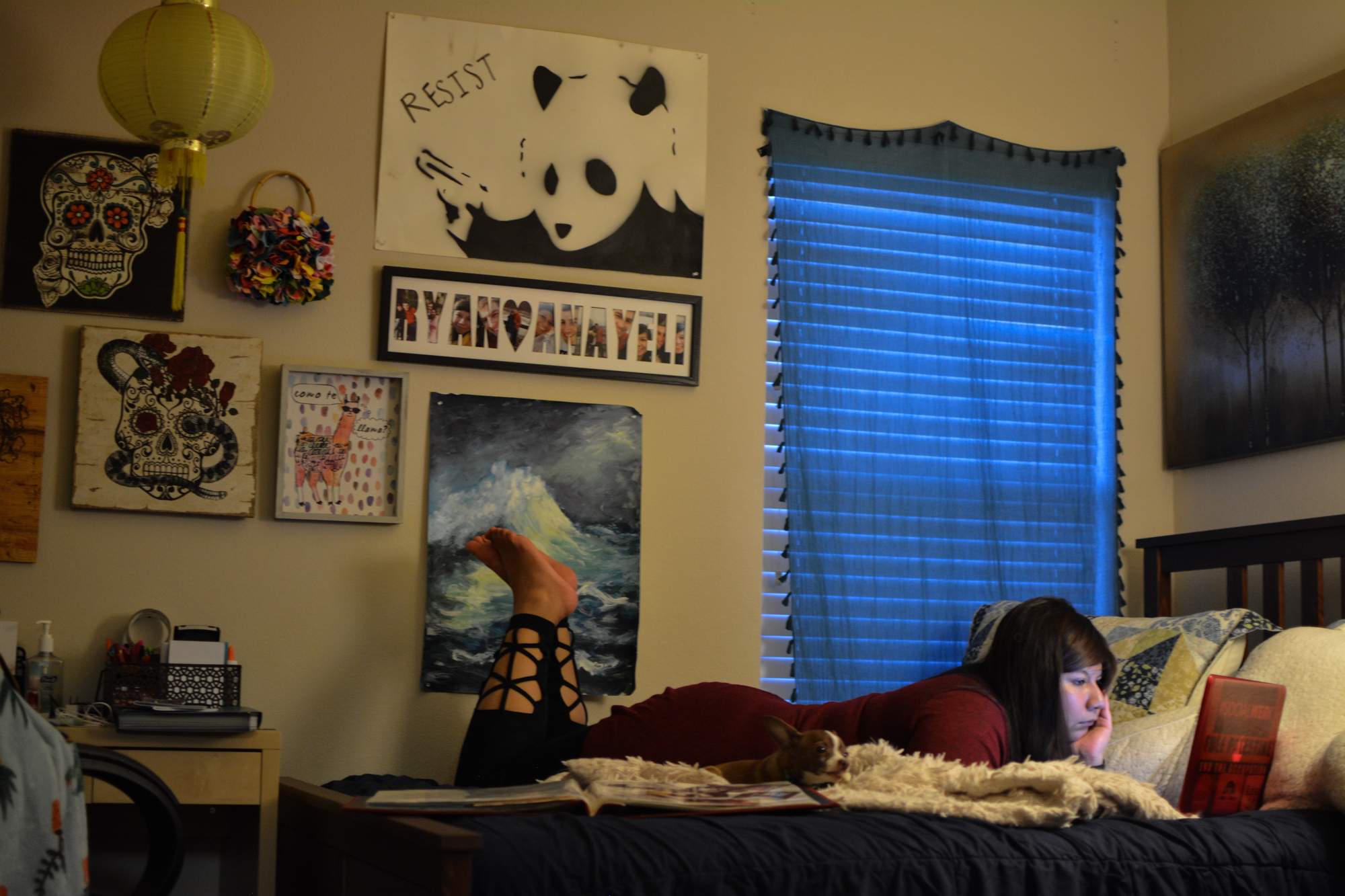 Like any typical college student, Marcos's room is heavily decorated with things that interest and relate to her; she has made this room her own, and it's the only room she knows. 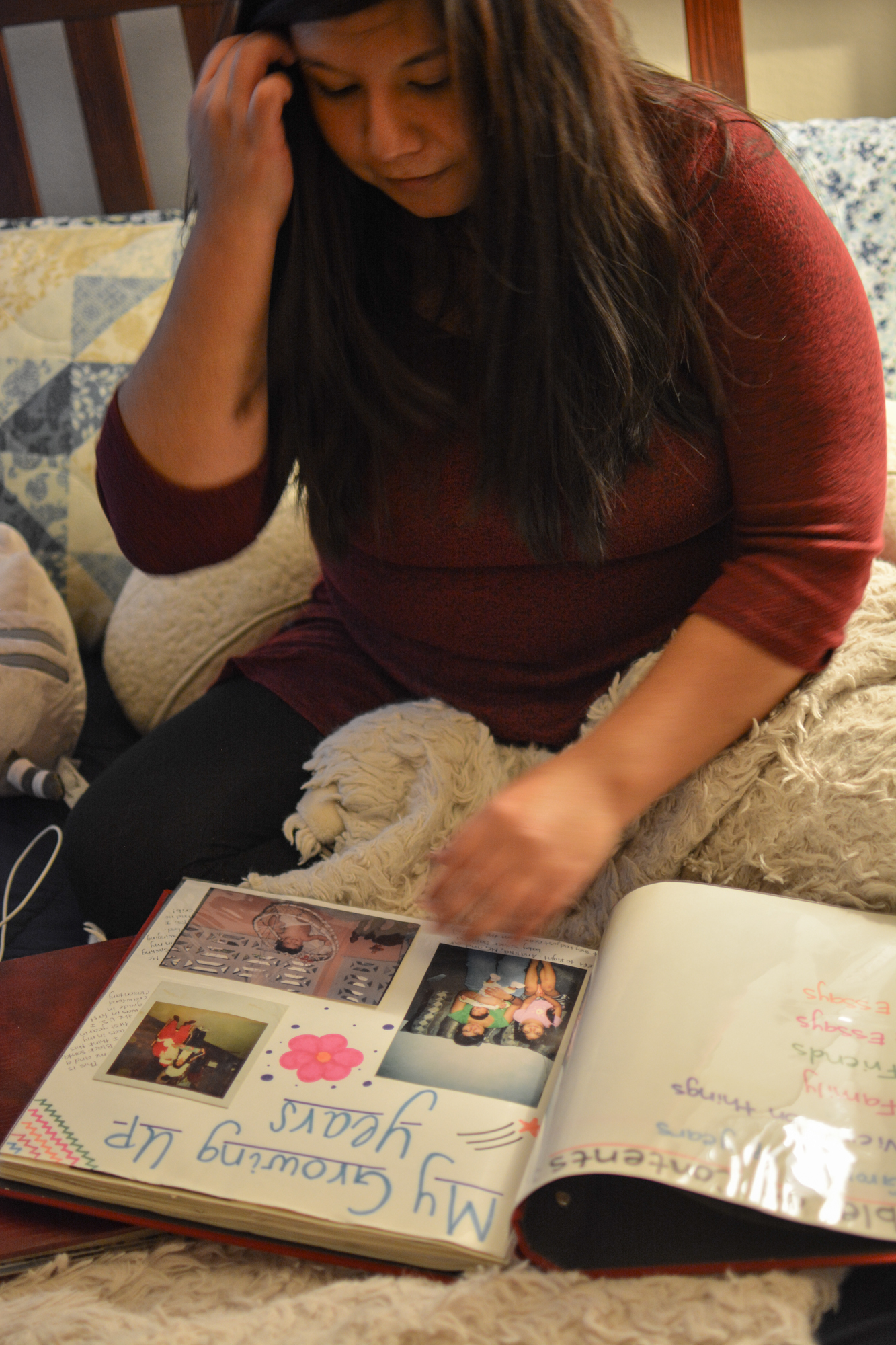 Marcos reminisces on her adolescent years with a scrapbook that she made when she was still in high-school. Accompanied with each photo in this scrapbook is some thoughts and reflections that she had on that memory during her life. 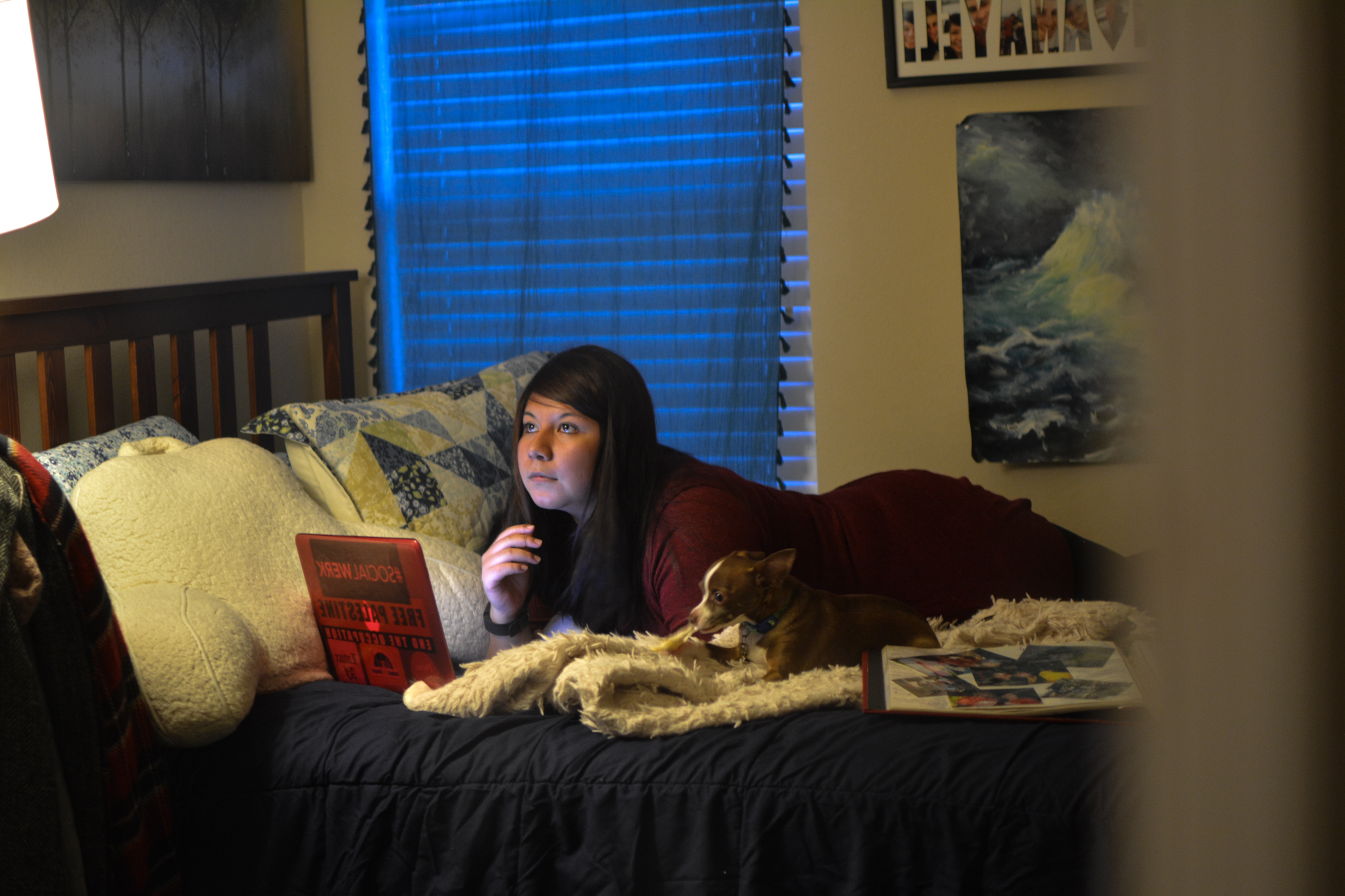 11
Although Marcos has been in the United States for more than half her life, she knows that her future here is still uncertain.

“A lot of undocumented students stay really quiet about what’s going on in their lives, but I found that telling people that I need help has really opened a lot of doors for me,” Marcos said.

If Marcos cannot renew her application, there is a chance she will have to leave behind the life she’s made and go back to Mexico—to distant relatives she only recalls in photographs and a country she hasn’t been to since she was six-years-old. But like most DACA recipients, she tries not to think about that chance.

Cervantes chose not to disclose when his DACA expires, though he thinks about the date often. Similarly to Marcos, he tries to focus on the positive.

“’I’m anxious and sad at times. I can’t sleep because I’m thinking about it constantly, but there’s only so much that I can do thinking about how unfortunate my situation is and I’d rather be proactive,” Cervantes said.

Currently, Cervantes is working in Washington D.C. as part of UT’s prestigious Archer Fellowship program. He is making plans to apply to graduate school and hopes to become a lawyer one day, despite the chance that he can’t practice in the United States if DACA becomes a thing of the past.

On Feb. 15, the Senate rejected four separate proposals that would incorporate DACA into the national budget. With the March 5 deadline looming, Marcos and Cervantes aren’t sure if they can settle down or prepare to uproot their lives.

“Right now I’m a very optimistic person,” Cervantes said. “No one really knows what’s happening with both parties, but I am hopeful that a deal happens before March 5.”