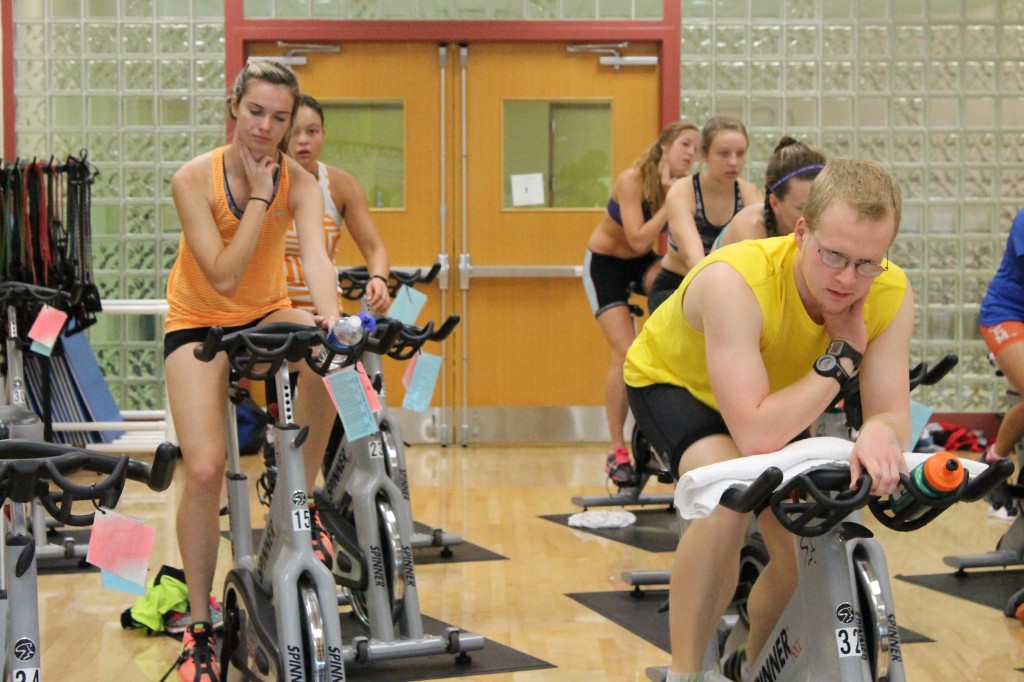 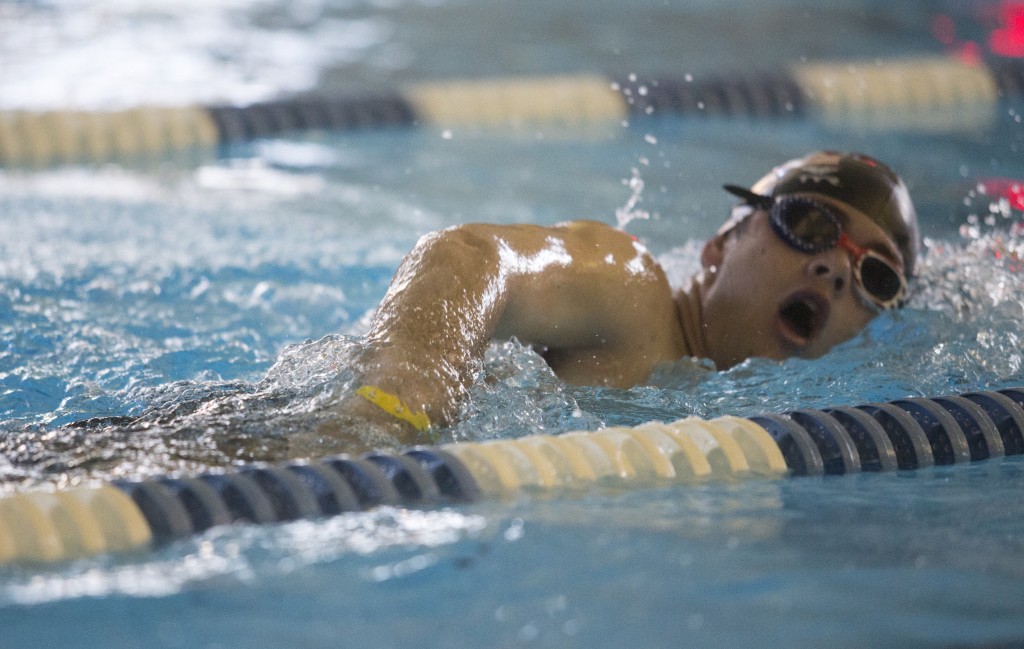 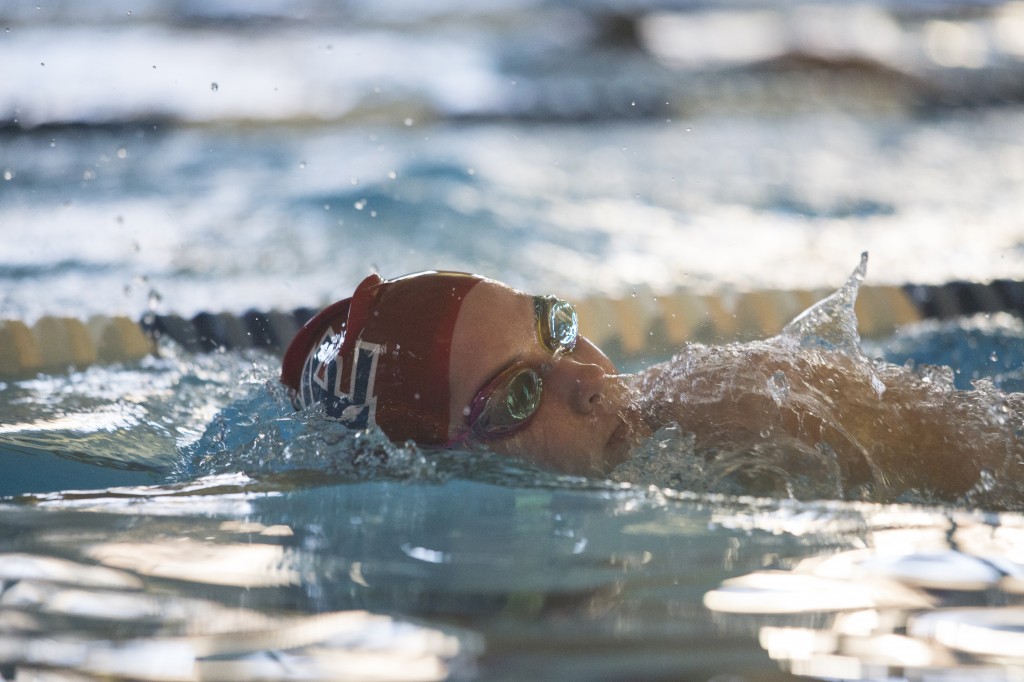 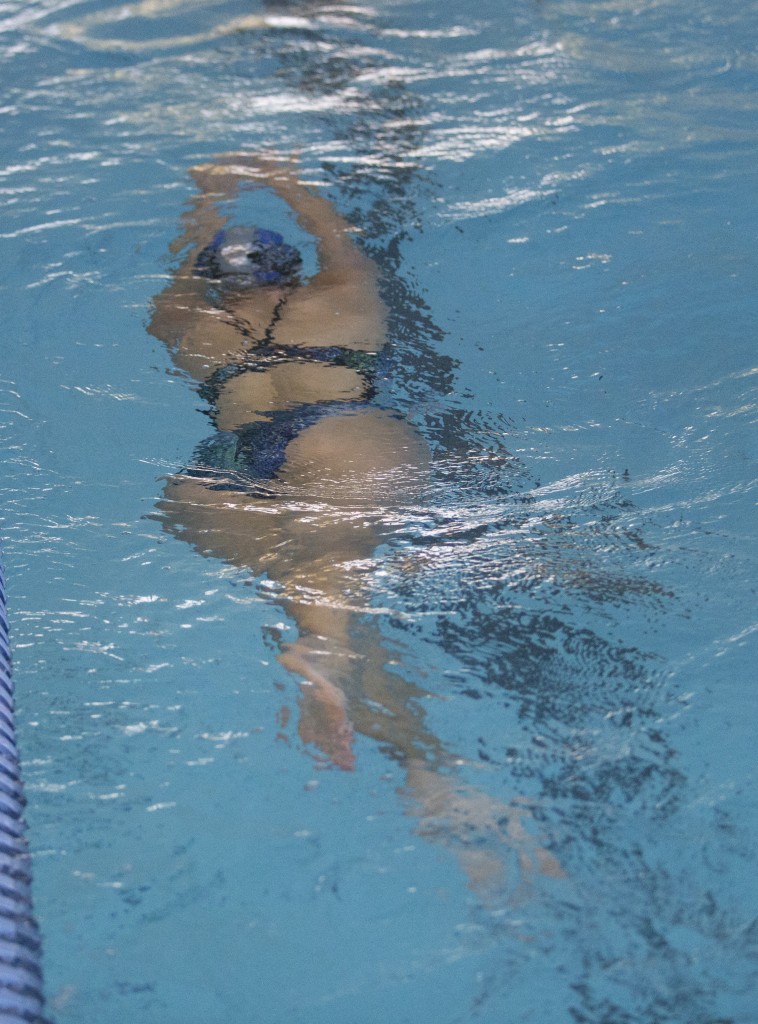 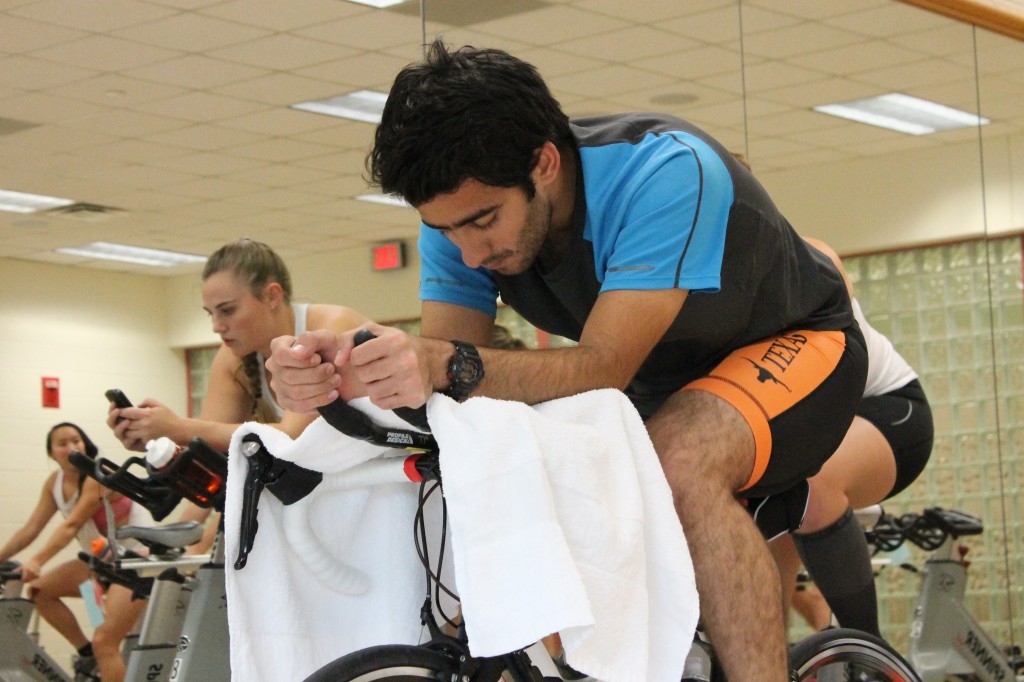 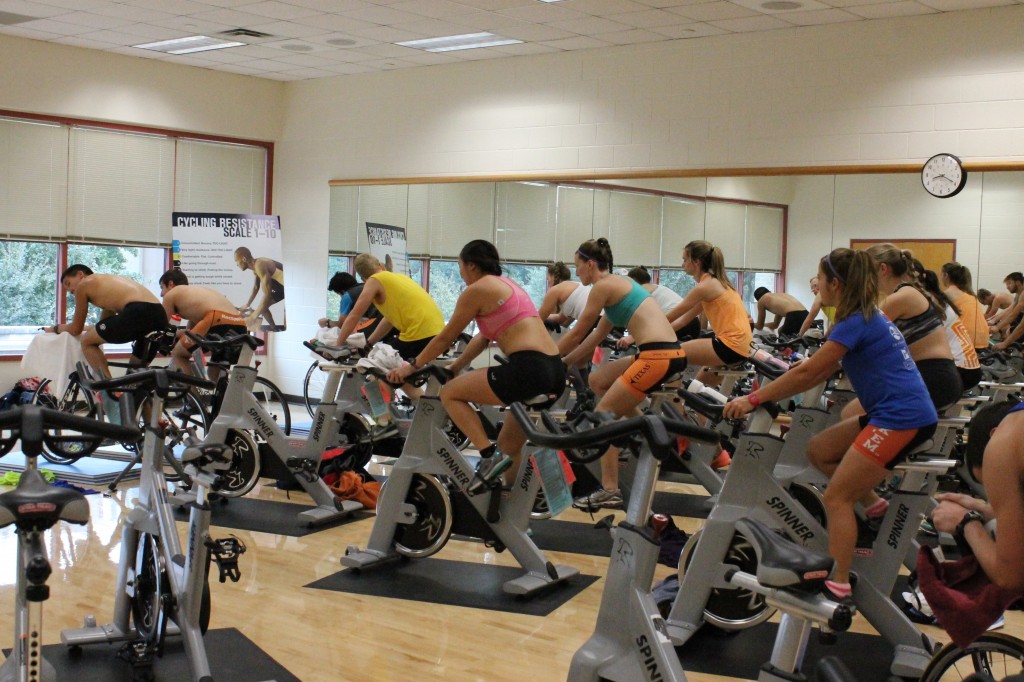 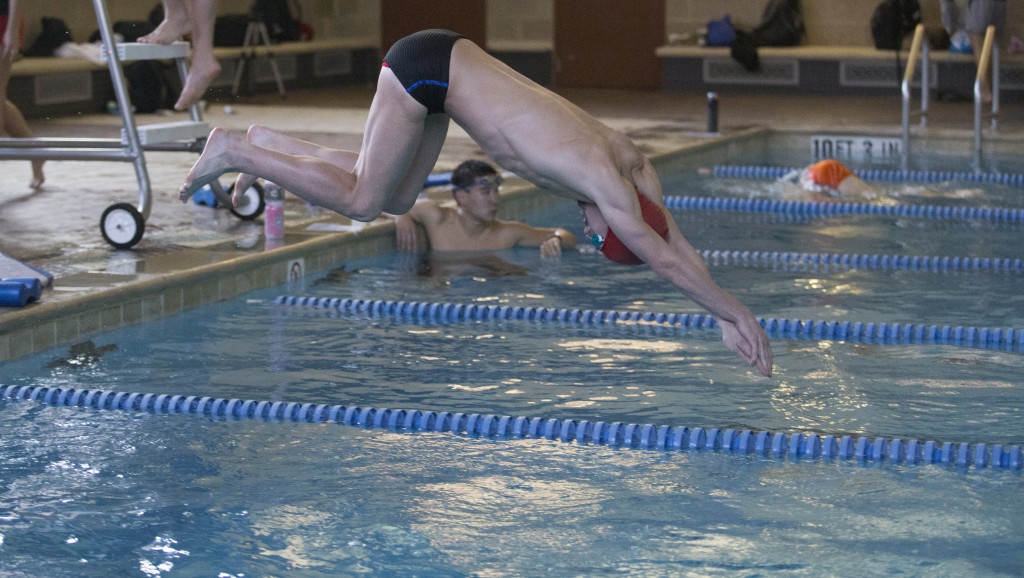 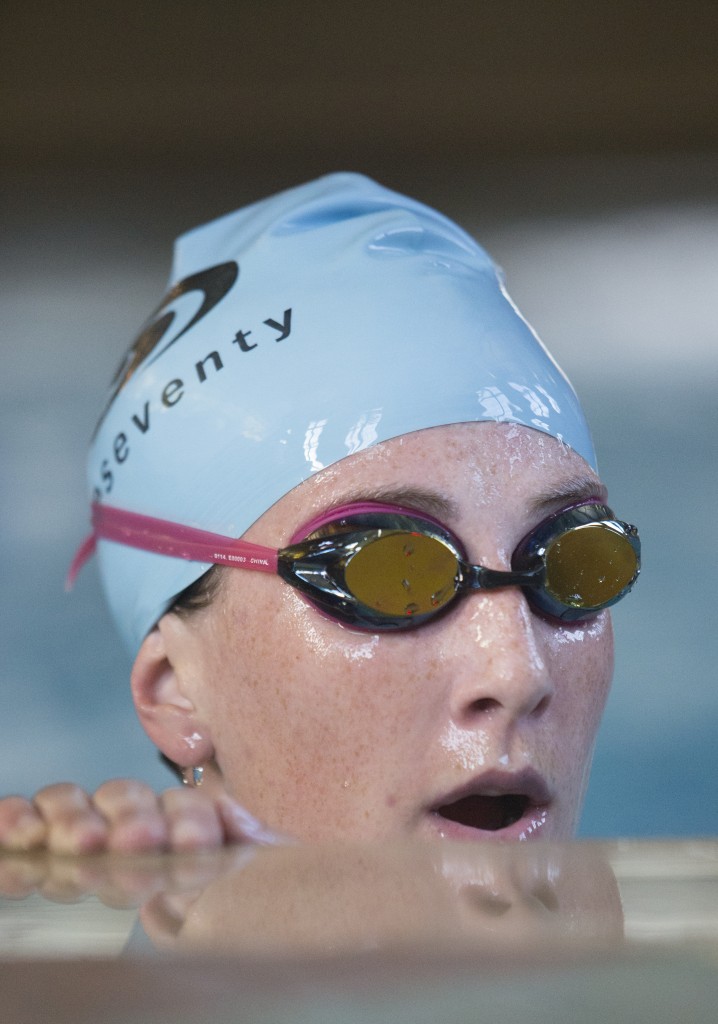 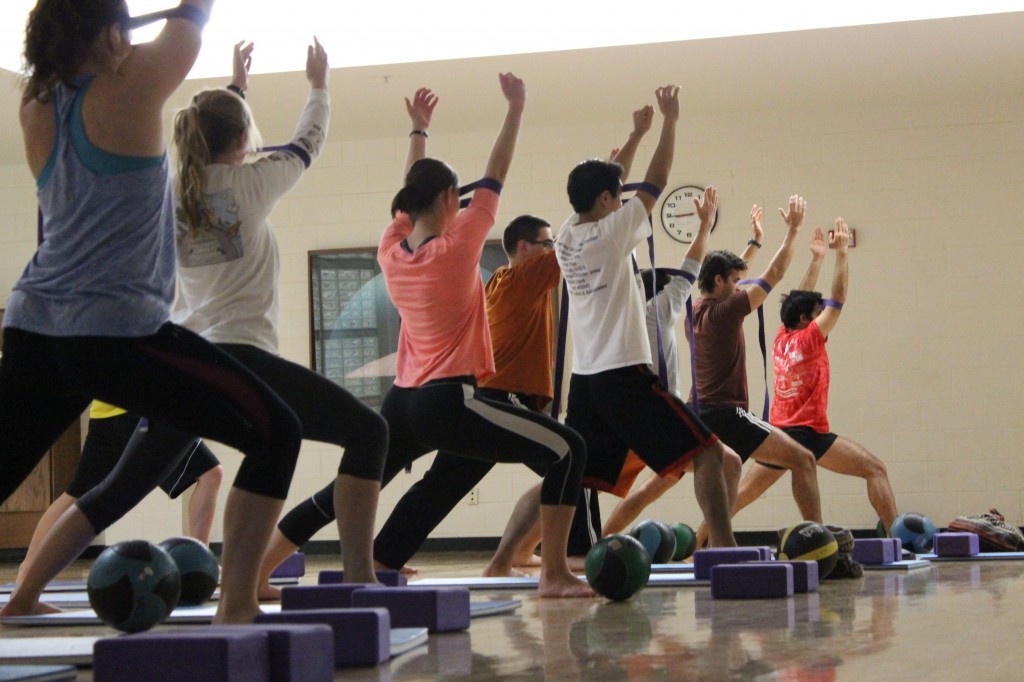 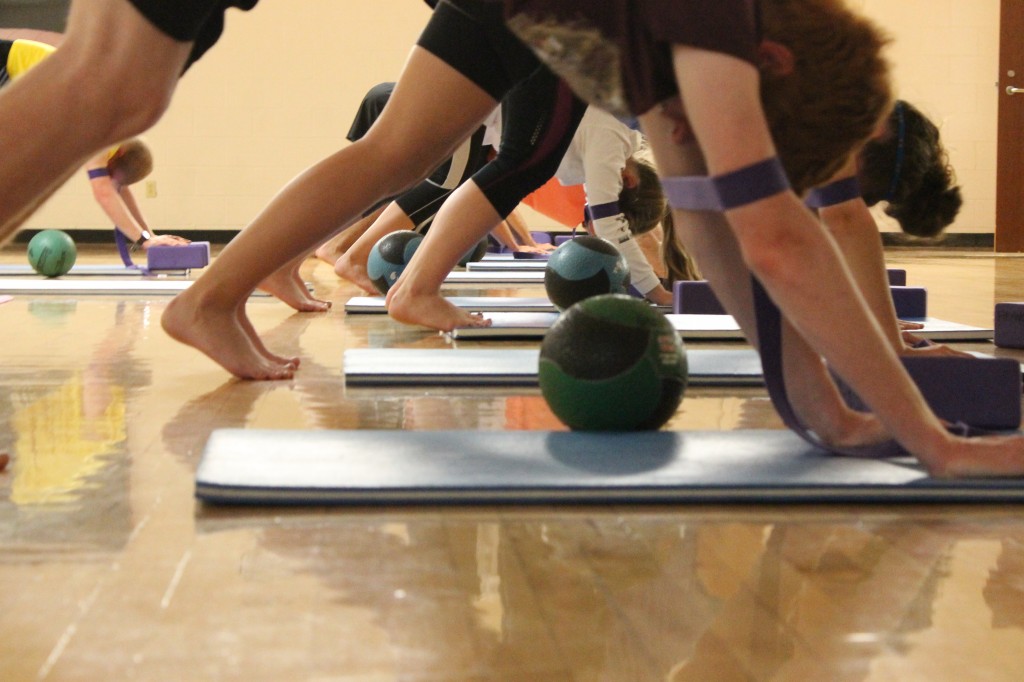 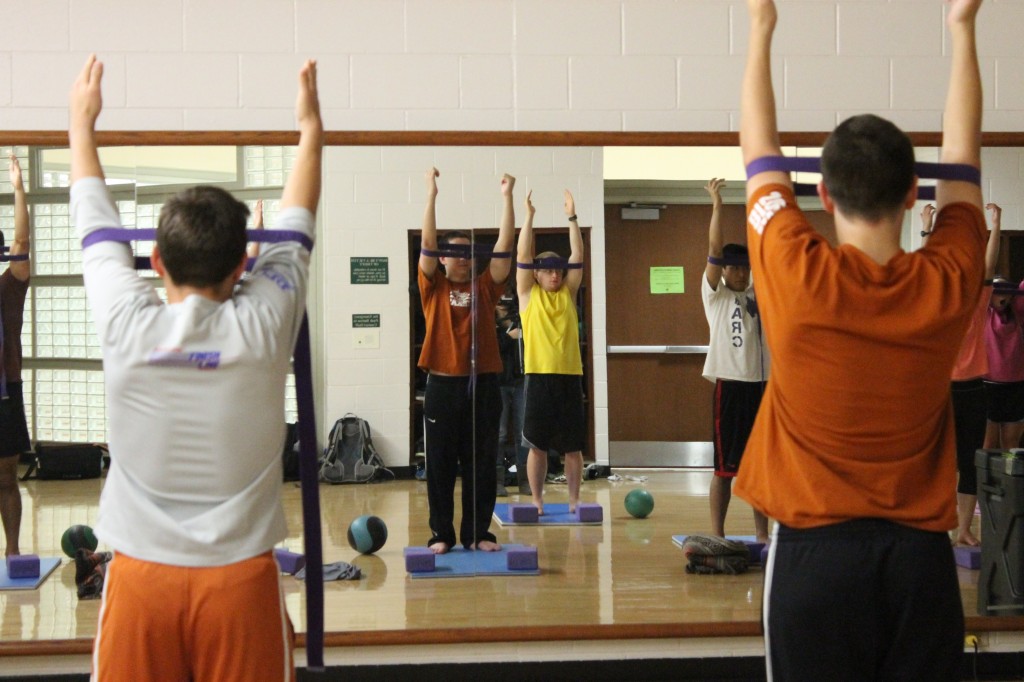 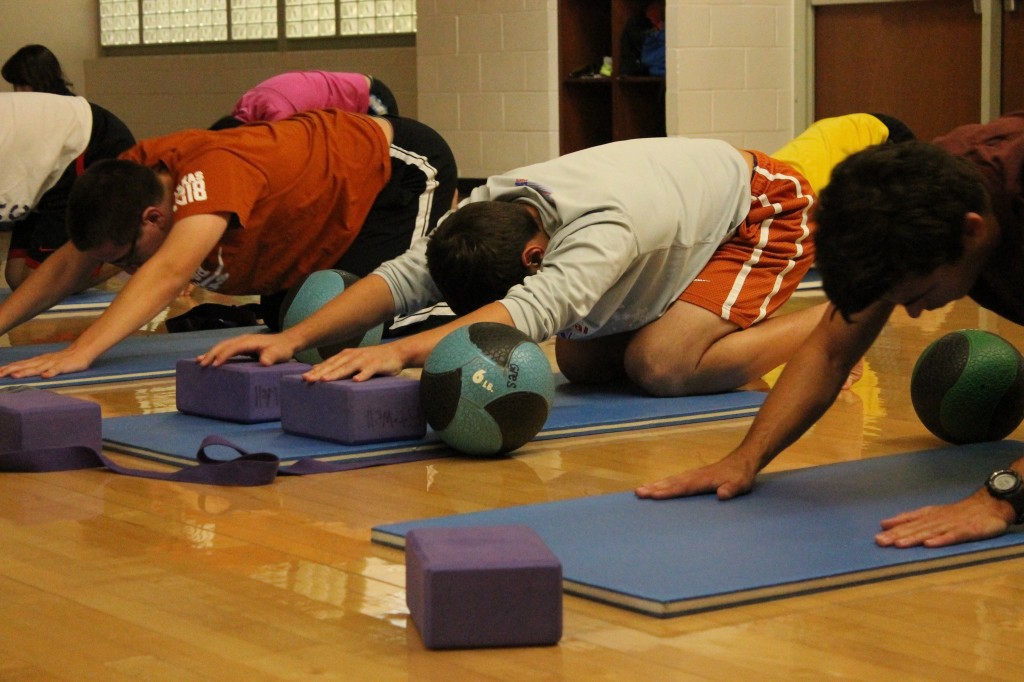 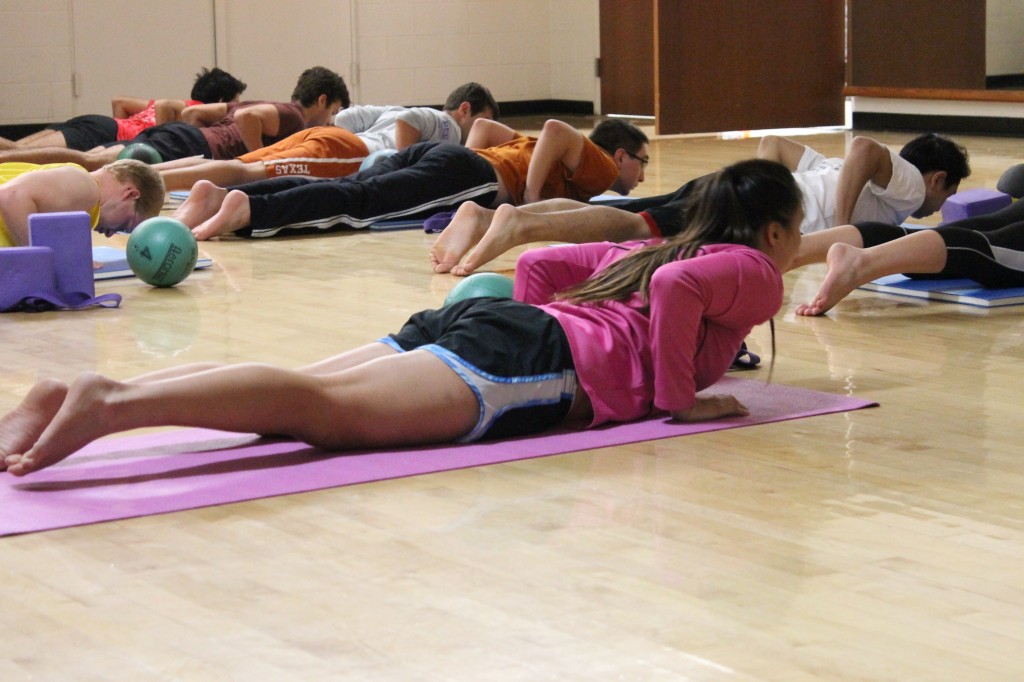 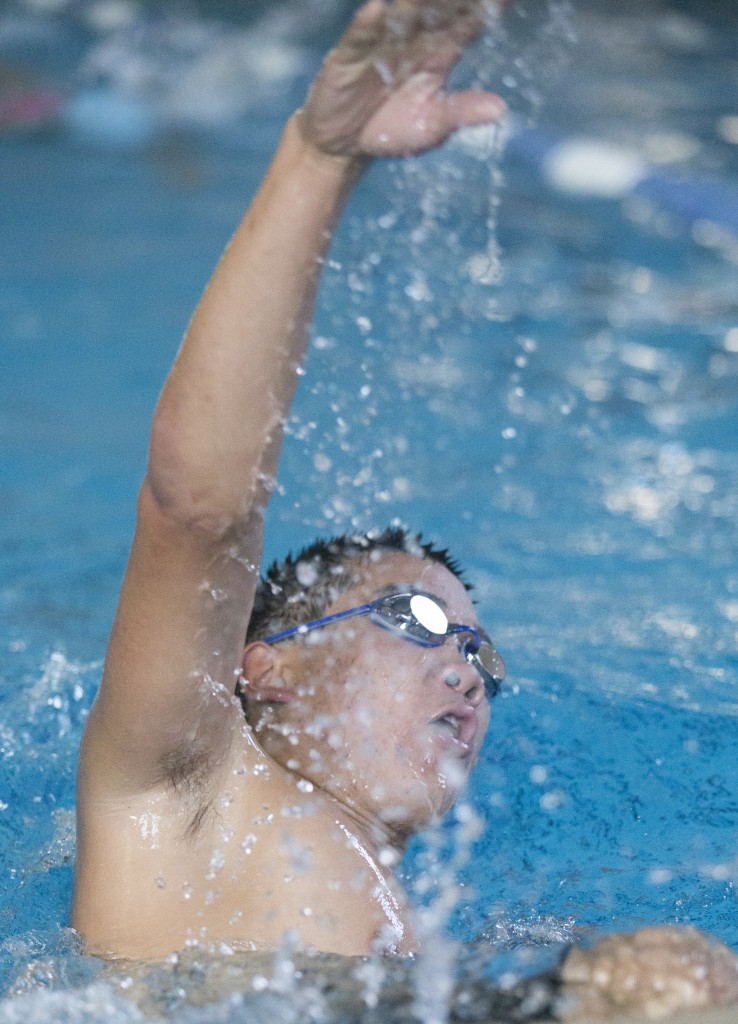 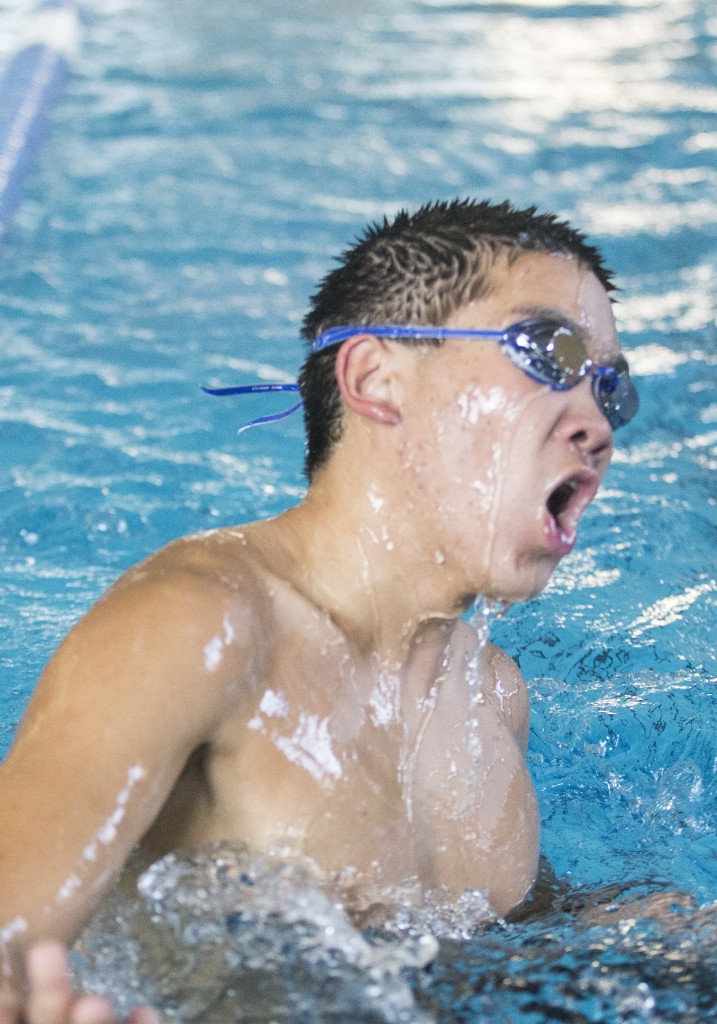 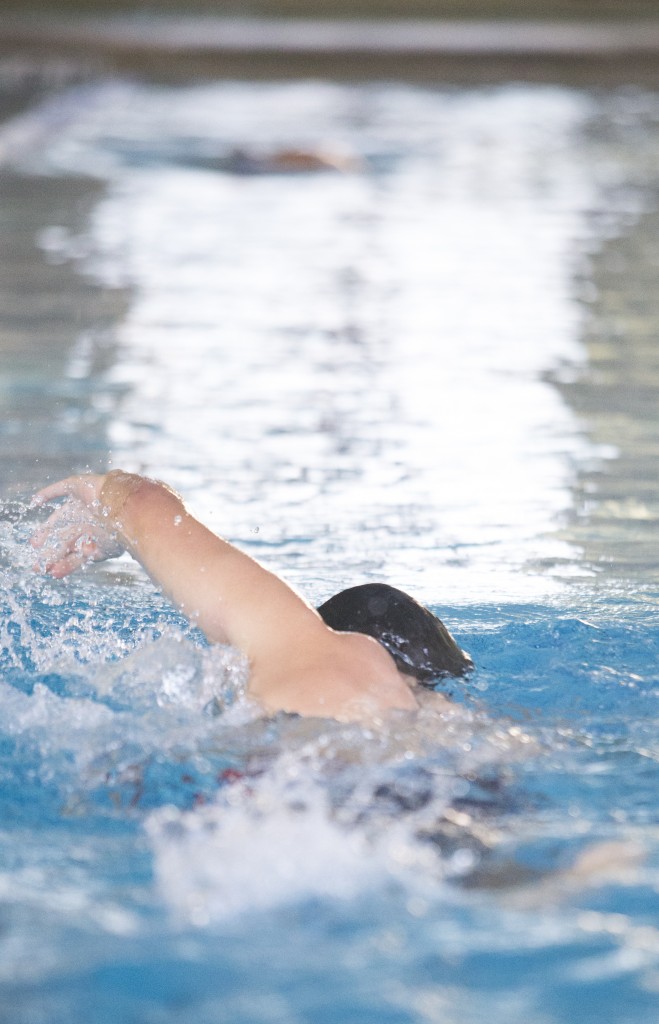 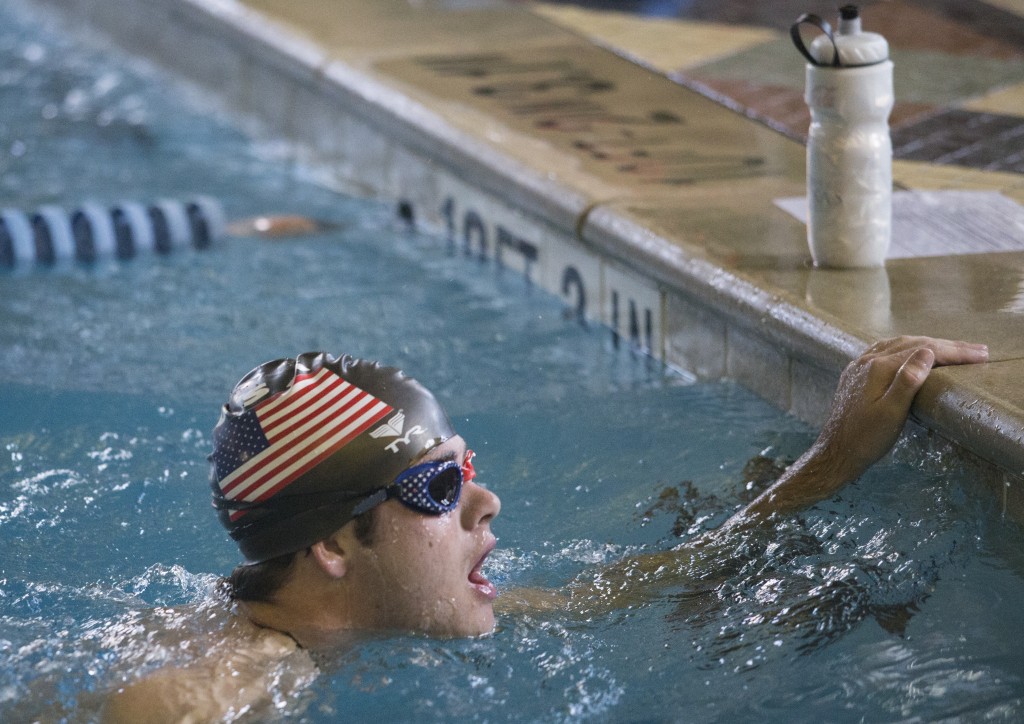 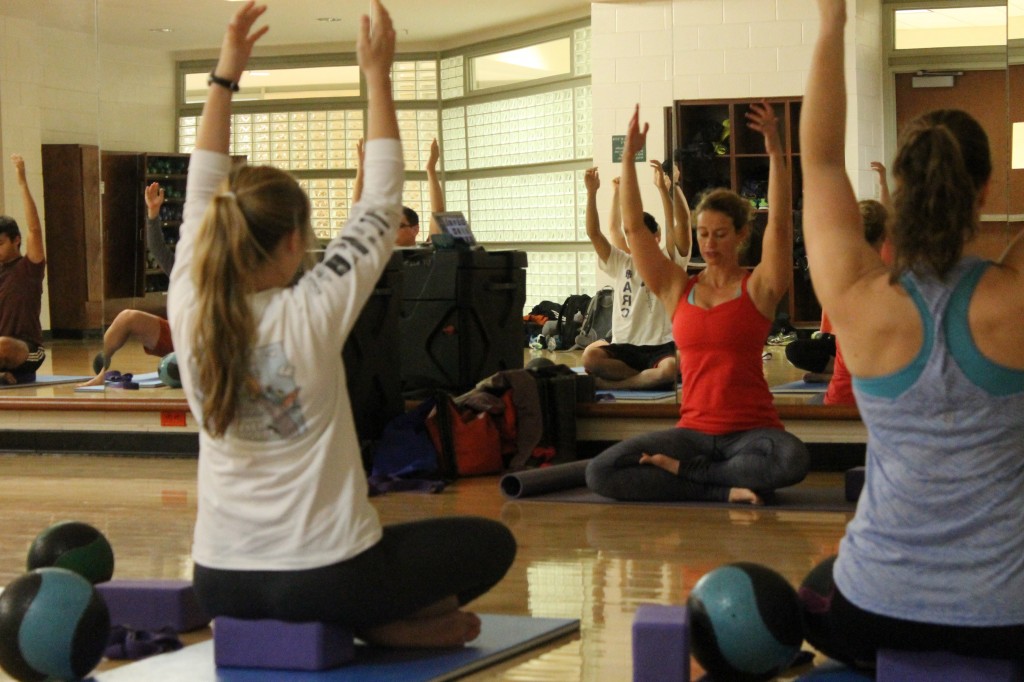 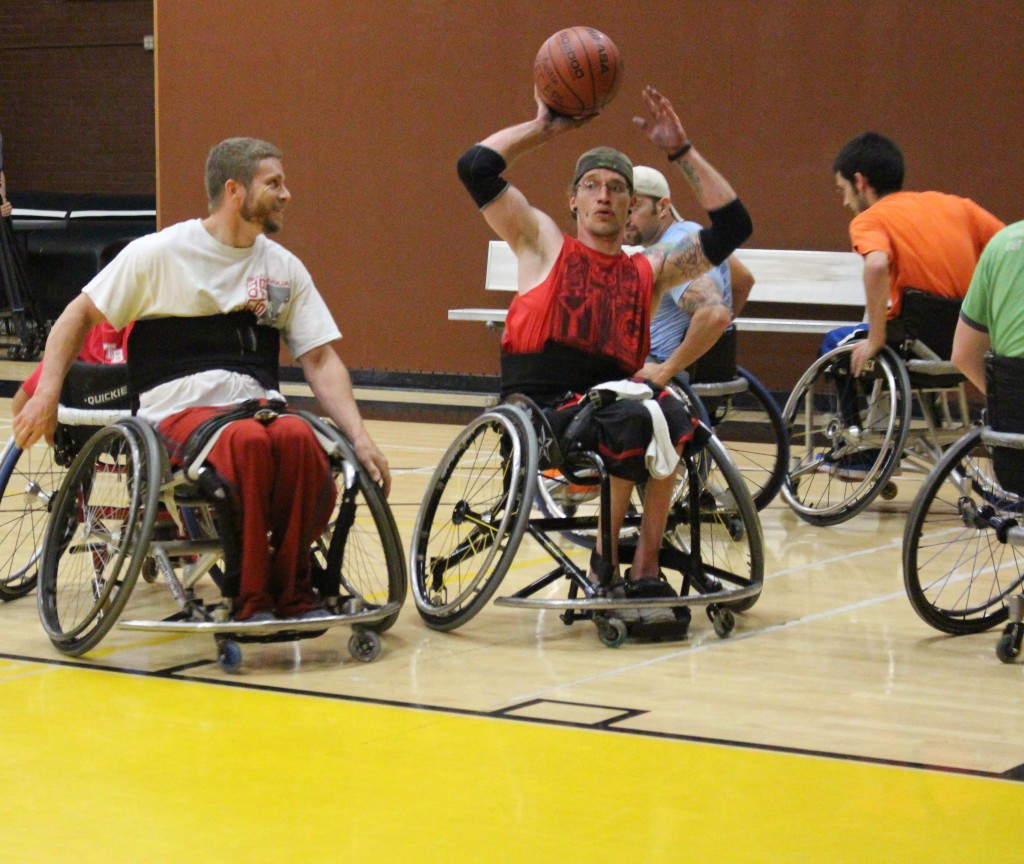 Michael Williams going for a 3-point shot during a scrimmage game at Doris Miller Auditorium on April 15, 2015 in Austin, Texas. (Photo/ Tessa Meriwether)

In 1978 the wheelchair basketball team, the High Rollers, played at Anna Hiss and Gregory Gym at The University of Texas. Players snuck David Wear, a non-UT student, into the gyms to participate since the team was always looking for more players.

“We were good until they came in to get our IDs,” Wear said.

Wear was injured January 8, 1976 at 12:30 in the afternoon. A drunk driver traveling 75mph drifted eight feet into his lane and hit Wear head on. Wear ruptured his aorta and spleen, punctured his left lung and suffered three compound fractures.

Wear was 19 years old at the time of the accident. It forced him to start searching for a new identity.

“Kind of shocking when they tell you [that] you are going to be in a wheelchair for the rest of your life,” Wear said. “[I] cried a lot.”

Katie Watson came to The University of Texas with dreams to make it to Track and Field Nationals, but due to repetitive injuries, the student athlete was cut from the team in her senior year.

“I had made running who I was,” said Watson.” “It was what defined me and that’s what I wanted with my college career.”

After suffering from multiple stress fractures in her femur, Watson, like many other athletes had to face an uncharted road to personal recovery, a journey that doesn’t always guarantee the full comeback for athletes.

According to the National Collegiate Athletic Association, while college athletes are generally healthy members of society, participation in competitive sports often brings the unavoidable risk of injury. But when one instance can literally take a player out of the game for, months, years or even permanently, what is the emotional damage an athlete must face while also dealing with their physical injuries?

Heidi Armstrong, owner of Injured Athletes Toolbox uses her own experiences to work with injured athletes and provide them with the tools for coping through feelings of anger, frustration and despair that often accompany the physical components of a sports related injury.

“I have unfortunately and fortunately had a lot of experience with physical injury,” said Armstrong. “I was a professional mountain bike racer about 15 years ago, had a bad mountain bike crash and I just fell into this really bad pit of despair. I lost my identity.”

After realizing she couldn’t do it herself, Armstrong sought help beyond physical therapy and met with a psychotherapist to work out her frustrations in productive ways. She later found that her experience could be of help to others in a similar situation and spent 12 years supporting athletes who simply needed to “talk with someone who’d been in that hole before.”

Armstrong suffered another injury in 2010 after a bad ski racing accident and decided to spend her 13 month recovery period researching the mental effects on injured athletes and how they described their suffering.

“I found that no matter a person’s age, sex, sport, or level of experience in the sport, the words that people described for their suffering were the same,” said Armstrong. “The most common word to come up was disconnection. Not only disconnection from their body, but also from the teammate’s social network and things like that.”

Watson’s recovery left her in a similar situation of disconnection.

“It’s a business so coaches have to focus on the better athletes who are getting them points,” said Watson.” “A lot of it was kind of put on me to decide what was wrong [with my injury] and I was kind of thrown on the back burner.”

Armstrong saw this common but often overlooked struggle for athletes and used her newfound knowledge to create Injured Athletes Toolbox.

“I thought back on all of the years I was helping people informally and providing a support they needed while injured, and those things became my services,” said Armstrong. “So through all of this I’ve helped people from all over the world and it’s been a really fulfilling experience.”

Former UT baseball player, Benjamin Kennedy suffered a concussion last fall during a scrimmage and described his recovery to be a very tricky process.

“At first there was nothing I could do for it,” said Kennedy. “Doctors told me the best thing I could do was lay around and after a month passed I was not feeling any better.”

Kennedy went on to see a concussion specialist who later diagnosed a problem in his vestibular system that deals with balance and vertigo.

“Everyone can see you break your arm or pull a muscle but a concussion is something that outsiders cannot identify just by looking at you,” said Kennedy. This kind of sent me into a depression because my brain was injured and I wasn’t sure how I would ever be normal again.”

Kennedy attributed his successful recovery to the support of friends and family who were there to help him out. Like Armstrong, he believes the emotional support of others helped him to overcome the injuries and their mental effects.

As for Watson, her injuries came as a blessing in disguise. “I’ll be running for A&M next year and it was because of the support of my previous coach and friends who encouraged me and told me I was going to be fine,” said Watson. “It has definitely been a growing experience every time I’ve been injured.”

Behind the Pink Gloves

Rising to the 26.2 mile challenge 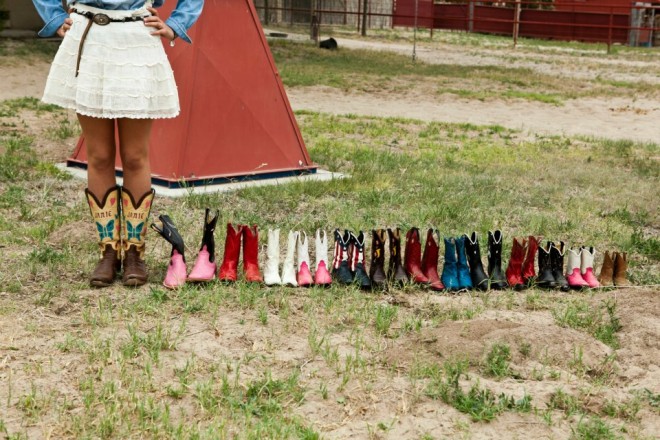 Longhorn Rodeo President Janie Johnson has accumulated quite a collection of cowboy boots over the years. Photo By: Kara Mercer

When Janie Johnson got her acceptance letter to The University of Texas at Austin, she was excited about joining one of the best radio-television-film programs in the country — but she wasn’t looking forward to giving up something that’s always been a huge part of her life.

Johnson comes from a Texas rodeo family, and riding horses and barrel racing came hand-in-hand with learning to walk in cowgirl boots. She grew up on a ranch on the eastern rim of Palo Duro Canyon, where there was plenty of room for practicing her sport and keeping her horses. She thought coming to UT, a school without a rodeo team, would mean putting that part of her life on hold for at least four years.

But then she met Alex Lang, another rodeoer and future Longhorn, and Johnson though she might be the perfect candidate to bring a huge missing piece of Texicana back to UT. She would start a rodeo team, but she wasn’t exactly sure how.

“It’s just one of those things where it doesn’t make sense,” Johnson said. “That UT, the most Texas school there is, doesn’t have a rodeo team.”

About sixty years ago, UT did have a rodeo team. They called themselves Los Charros, and they functioned as a social club and competitive rodeo group. At the peak of their popularity in the late 1950s, they had about 200 members and hosted the country’s largest collegiate rodeo in a 7,500 seat arena they built themselves on a plot of land just north of campus.

But by 1962, with all of the most notable members of the Charros graduated, the group disappeared. The plot of land that housed their arena is now home to the shops and condominiums that make up the Triangle.

The eventual destruction of the old arena to make room for more restaurants and homes captures one of the biggest problems for the small rodeo group that exists at UT today—finding a place to practice. Johnson and and a handful of other Longhorns wanted badly to see a real team return to the state’s biggest school, no matter how tight space might be in the city.

“People are choosing between A&M and UT for academics, but will always choose A&M because of the rodeo team and the support that they get,” Johnson said. “But UT is so highly academic rated, that if we had a rodeo team, it would [become] the easy option.”

What separates UT’s rodeo team from teams at schools like Texas A&M is how the group is registered with the university. While A&M’s team is registered as a sport club and receives funding and support from the school, the team at UT is only recognized as a glorified social club with the Dean of Students. That means no funding, no facilities and no guarantee that the team will outlive its current members.

This puts a lot of pressure on Johnson and her group. Most of the members are upperclassmen, like Gus Chesnut — a business senior and the group’s calf roper.

“All of our members are about to graduate so we really need to find and recruit younger kids that love the sport as much as we do,” Chesnut said.

But not having facilities is the biggest burden on the group. Without a place to stable their animals or practice for competitions, the members are left commuting hours back and forth between UT, their homes across the state and various cities in Texas where the competitions are held for events that often last no more than a few seconds.

“We’re just asking for support and a facility that we can keep our horses in,” Johnson said. “It doesn’t have to be nice. It just needs to be something that we can use that makes it possible.” 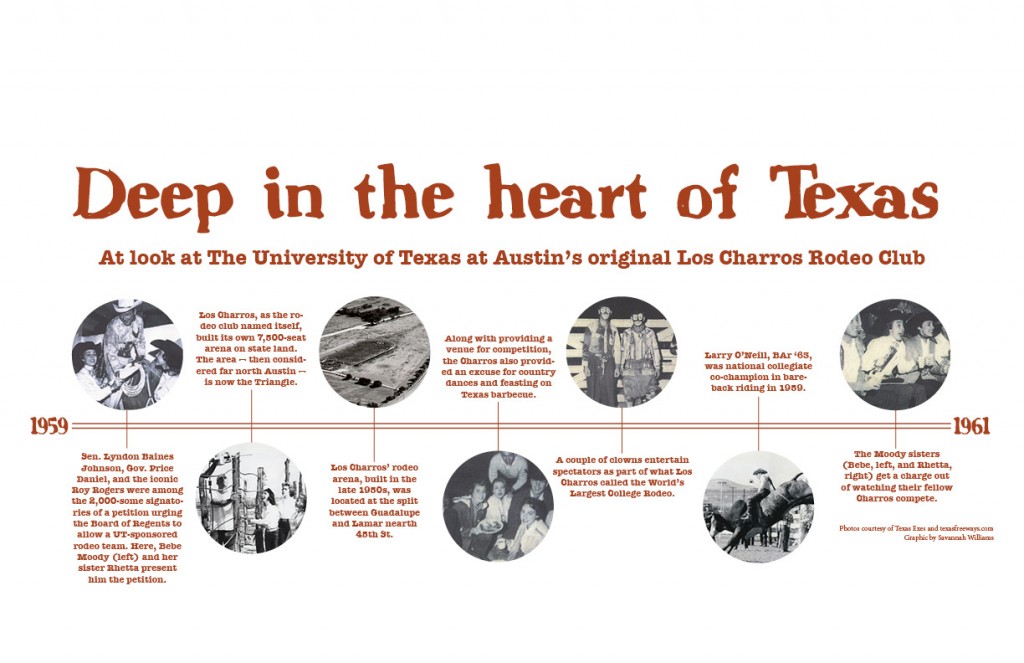 Making a dream a reality

The requirements for registering as a UT club sport include having a group of at least 10 members, prior existence of at least two years, involvement with a national governing body, regular competitions and minimal risk posed to student competitors. As of now, the group has fewer than 10 members. And due to the high risk factors of their sport, the club faces potential liability issues.

But it’s been done before. Having facilities and a university sponsor minimize risk and allow for supervision.

He isn’t an official sponsor, but Steven Jennings, a longtime rodeo enthusiast and adjunct professor for UT’s RTF program, reached out to the group about a year and half ago. He’s worked with Rodeo Austin for roughly 20 years and when he heard what Johnson was doing, he wanted to find a way to help UT’s small rodeo community in any way he could.

According to Jennings, there’s no reason UT shouldn’t have a thriving rodeo team all its own.

The group’s issue is a cyclical problem — they can’t maintain eligibility as a sport club until they have 10 members, but attracting 10 or more members to a group that most students don’t even know exists is nearly impossible. While membership has fluctuated at or around 10-15 students, many graduate before any real bureaucratic action can be taken.

Maintaining in the meantime

Johnson, Chesnut and the rest of the group compete as often as they can at various rodeos around the state—but almost never together as a team. While they manage to coordinate for small events scattered throughout the rodeo season, traveling together is a logistical nightmare since their animals and gear are spread all over Texas.

But when the announcer calls their name at competition, it’s always followed by, “The University of Texas, Austin,” and the UT logo is embroidered on their pearl-snap riding shirts.

For now, they’ll continue competing and looking for ways to grow their group membership. Johnson and Chesnut both said they hope to compete in professional rodeos after college. Rodeoing is in their blood, and through the UT Rodeo Club, they’ve fought to keep it alive for years.

“It is completely our responsibility and duty as UT alum to support anybody that comes in that wants to help with the rodeo team,” Johnson said. “That’s really going to be the future of the team.”