Oct. 23 Food and Culture Comments Off

Michelangelo used a 50-foot ladder to reach the ceiling of the Sistine Chapel. Picasso required a vast color palette to coat his geometric shapes. Banksy operates through complete secrecy. Shannon Donaldson needs a little water and a well-lit room to keep her art alive. 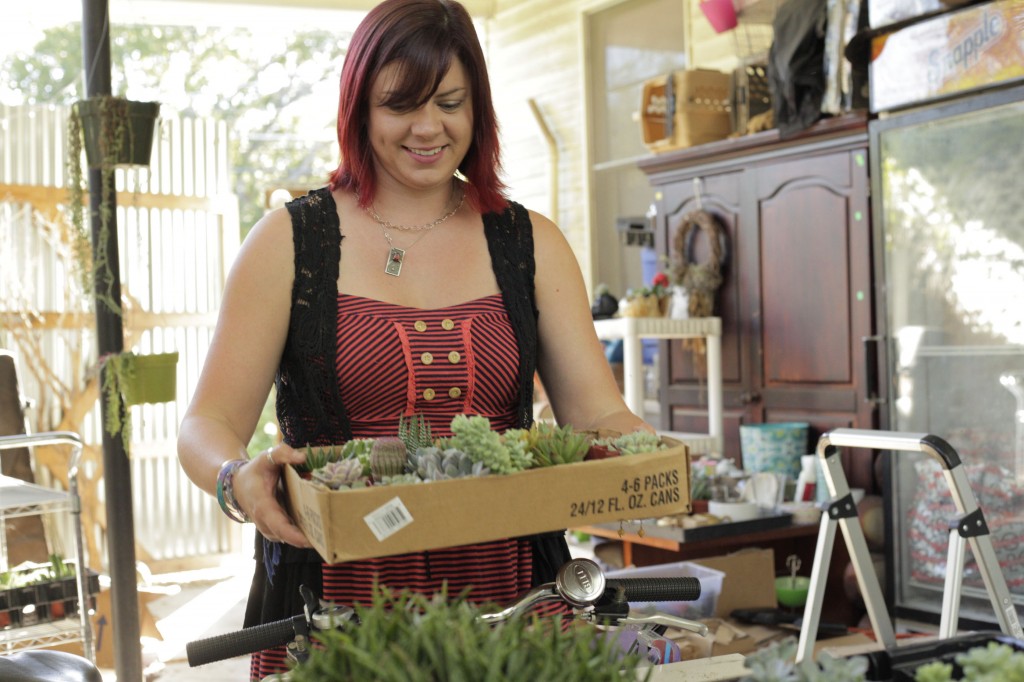 Shannon Donaldson, founder of Flowers on the Fly, prepares succulents on her ice cream bike. Photo by Helen Fernandez

After graduating in 2006 with a degree in sculpting from Stephen F. Austin University, Donaldson didn’t know in what direction to take her artistic abilities. 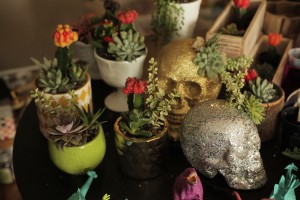 Donaldson says she sees each succulent as a sculpture in itself. She creates arrangements by focusing on different textures and colors. Photo by Helen Fernandez.

In 2012 she founded Flowers on the Fly with an ice cream bike and a few dozen succulent plants. Her business flourished – no pun intended – when she started pairing the cactus-like plants with funky vases, pots and sculptures that she purchased from local shops.

After securing her three spots: South Congress, The Drag, and downtown Austin – Donaldson became the go-to succulent vendor around town.

University of Texas at Austin student, Leigh Brown has started working with Donaldson to personalize her purchases.

“I buy succulents from here every three or four months,” says Brown. “I design a setup with her and she’ll go and get the plants for me.”

Not only do UT Austin students enjoy sprucing up their dorm with stylish succulents, the local art community has praised Donaldson for her innovation. RAW, “the natural born” art show hosted at The Belmont in downtown Austin, invited Donaldson to showcase her work. Her setup ranged from succulents sprouting out of glimmering black skulls with lit up eyes to blue dinosaurs with plants growing out of their back. The creativity and attention to detail didn’t go unnoticed – her cart was placed on the first floor, directly across from the main stage, where RAW attendees crowded around in admiration. 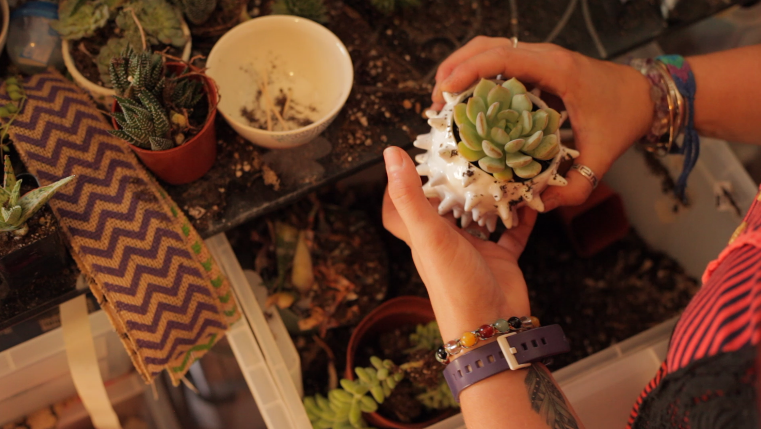 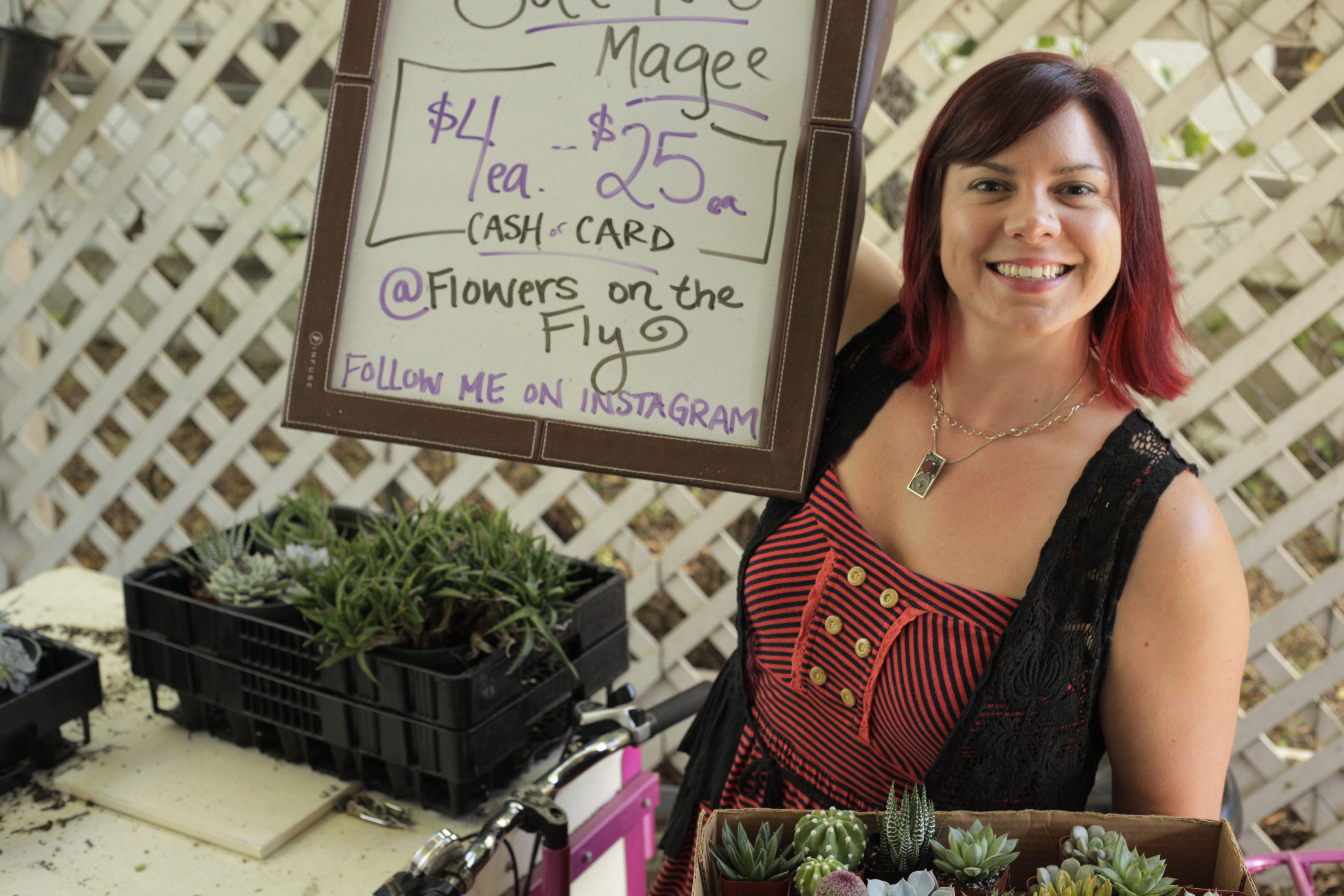 Donaldson claims to be the "Cutest Little Succulent Cart in Austin." She has developed an online following through her Instagram account. Photo by Helen Fernandez. 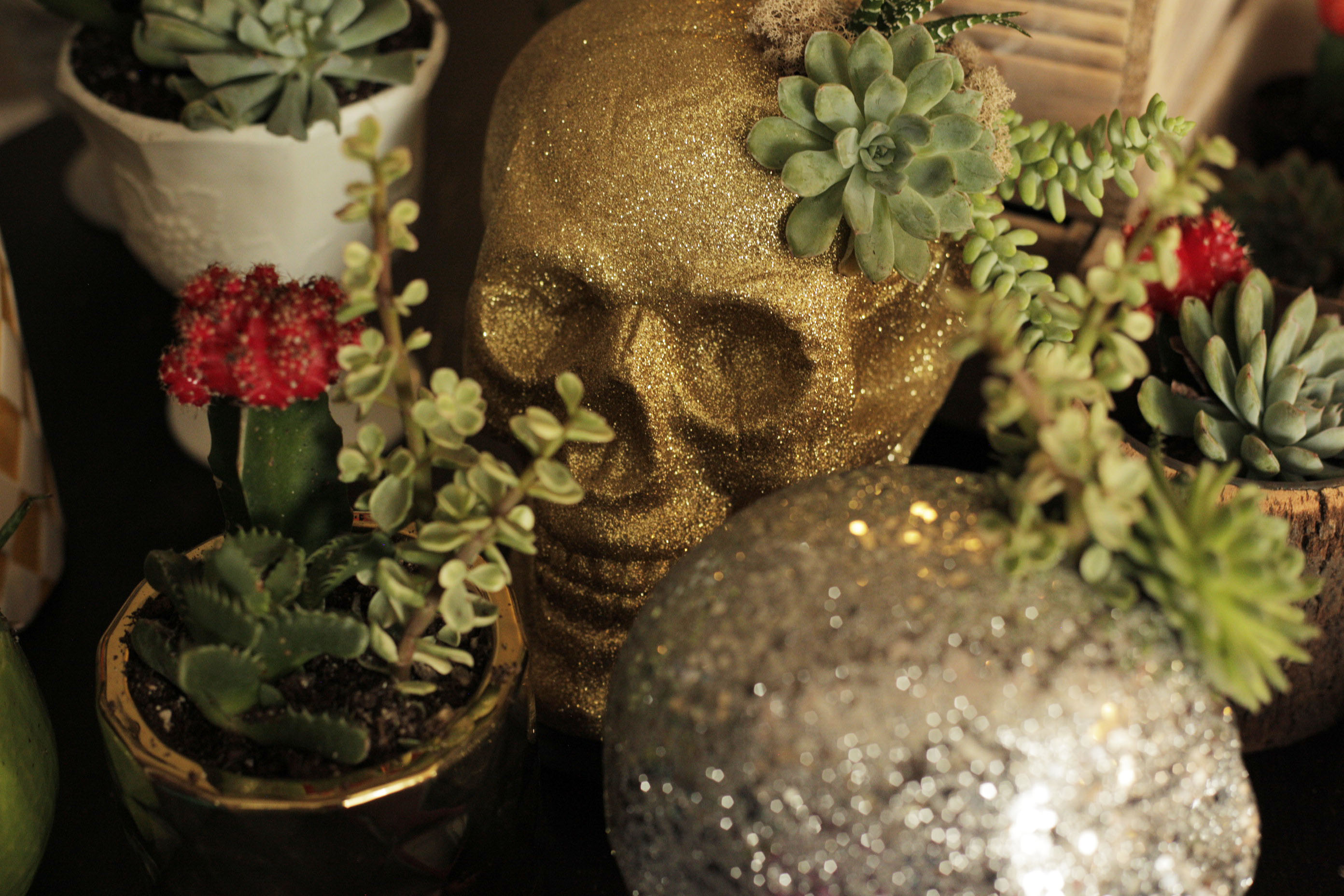 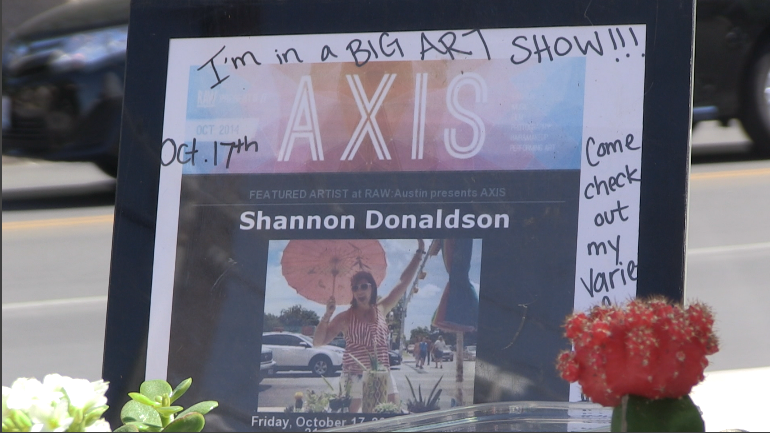 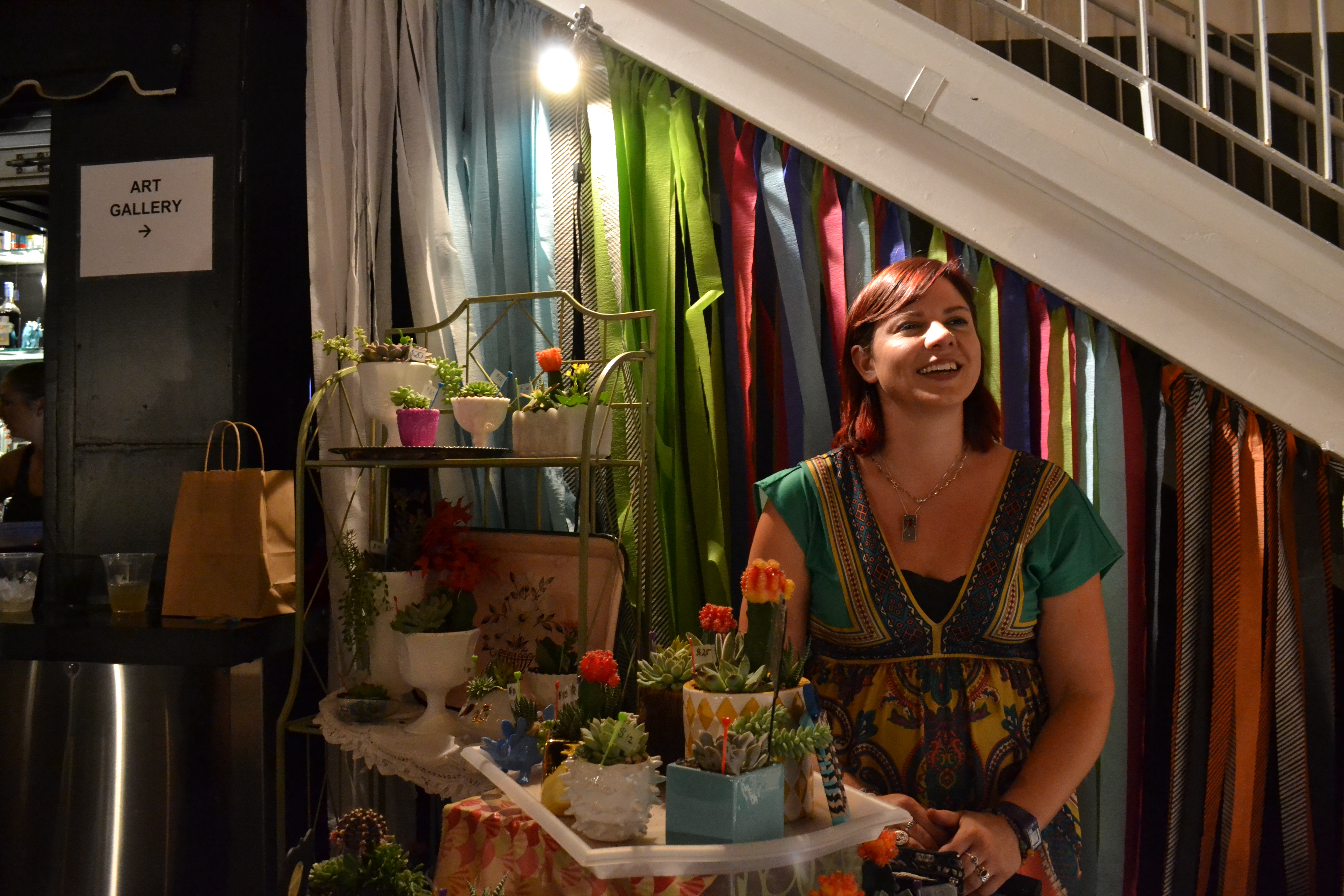 Donaldson, nervous and excited about the art show, wants to put herself out in the community. Photo by Helen Fernandez. 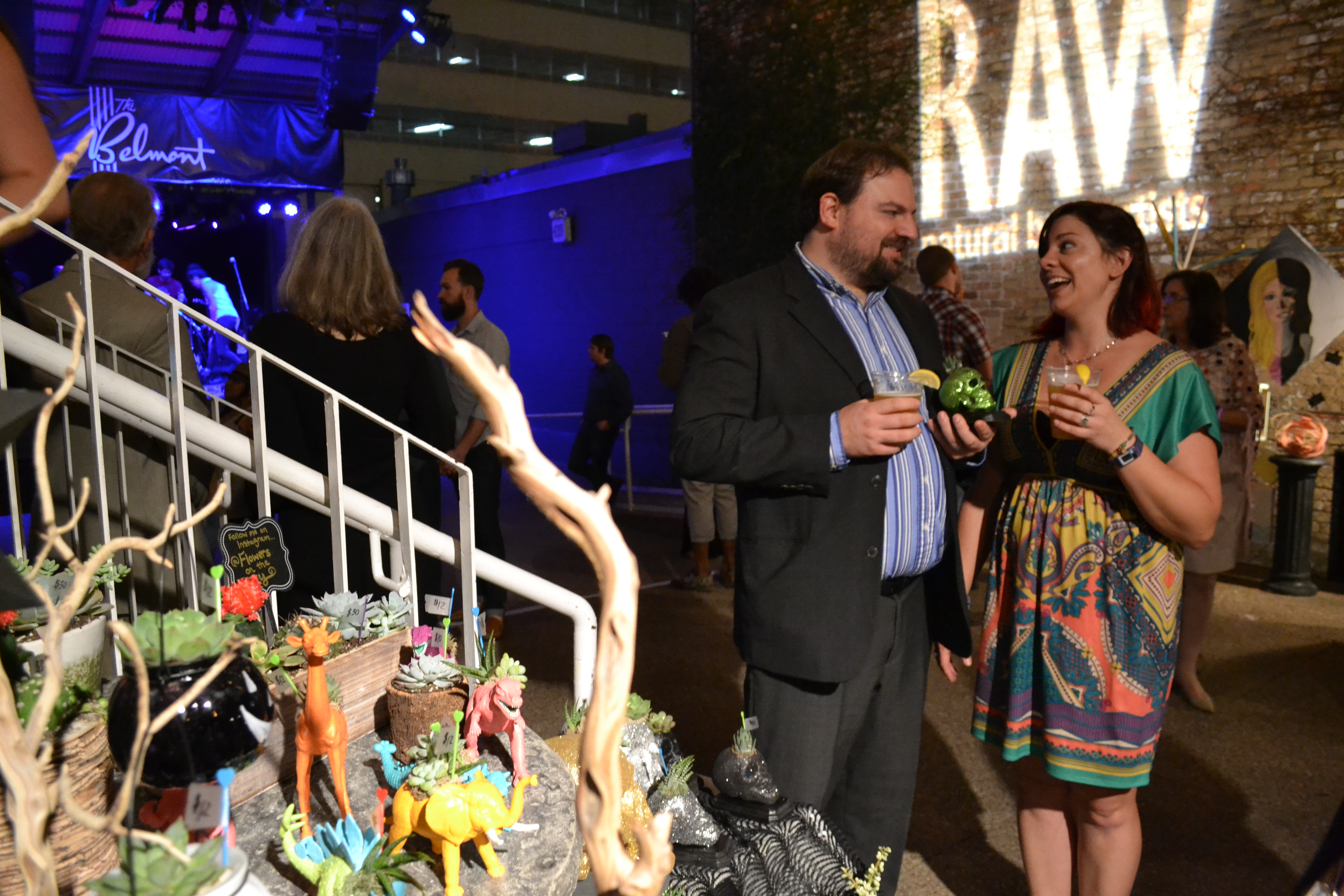 Donaldson talks to a customer at the RAW Art Show at the Belmont. Photo by Helen Fernandez.

“My favorite thing is the succulent gasp – it’s the moment when people see my cart and they’re like ‘Ah that is so cute!’”

Donaldson had to create a job to use her art degree. She says she wasn’t able to go out and find one. Photo by Helen Fernandez.

Even though her succulents have been in high demand among the art community and UT students alike, Donaldson doesn’t have any desire to raise prices. Ranging from $4 to $25, her succulents are cheaper than most art – and plants in the area. An appreciation for high-quality, reasonably priced art was a key component when creating Flowers on the Fly.

Starting a business was a big risk for Donaldson but it paid off – proving to her family and self that unconventional paths can be successful.

A Budding Artist from Claire Edwards on Vimeo.