Anthropos Arts–bringing music back to the forefront 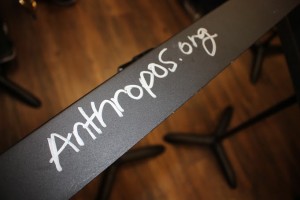 Arts education has been declining for more than three decades because of tight budget cuts and a common misconception that the arts are beautiful, but not vital to the core curriculum.

Extensive research shows that music education correlates to almost everything we want for children’s cognitive development and demand from our school system: academic achievement and social and emotional growth.

Dylan Jones founded Anthropos Arts in 1998 with a similar idea in mind. The program provides high-quality music education for low-income students. With the help of professional musicians from diverse music genres, Jones is able to give free music lessons to students.

“One of the biggest things for musicians is seeing kids perform and reliving their moments of musical discovery. We get to watch kids to relive those first moments, it’s like a milestone,” Jones says. “Students in poverty face more barriers than most students. We give them a safe haven and something intellectually challenging.”

Seventeen years later, Not only do students get instruction from professional musicians—some even Grammy-winning artists—the students perform at well-known music venues, and events like ACL Festival, SXSW, Shady Grove, Stubb’s, and more.

Aside from musical exposure, students are learning valuable life lessons that prepare them for college and the real world. Involvement in the arts is associated with gains in math, reading, cognitive ability, critical thinking, and verbal skill. It can also improve motivation, concentration, confidence, and teamwork. 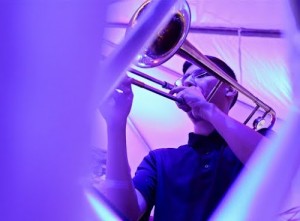 Andres Rios, an 18-year-old graduating senior in the program feels he has grown immensely from his time at Anthropos.

“When I started Anthropos Arts I had a lot of anxiety with playing in front of people and being in front of a crowd in general. This program taught me how to stay in control and keep comfortable in those types of environments. I feel that music benefited me by making me more creative and expressive in the classroom. It even helped with my public speaking because of my experience of being in front of crowds.”

Carla Pantoja, a 19-year-old graduate from Anthropos reflects on her positive exposure from the arts program.

“I don’t know where I would be if I didn’t play music. I don’t think I would be in college or would have graduated from high school.”

When Jones first started the charity, he didn’t realize what the outcome results would be.

“Now we’ve done it and I’m in year 17 and it works. I encourage people to support. Like these schools, we’re underfunded and need money to help bring these resources to these kids—and it’s a no brainer, we have one of the biggest music scenes here in the world. And we have tons of kids and its absolutely crucial to their development.”

Over the past five years, 100% of their senior students have graduated from high school, and more than 80% enrolled in college on scholarships. There are currently 150 kids on 18 campuses and will have around 20 concerts this year. 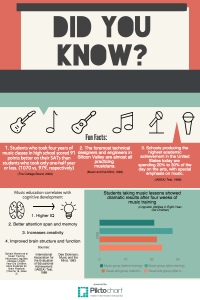 All the Art in Austin is Fine 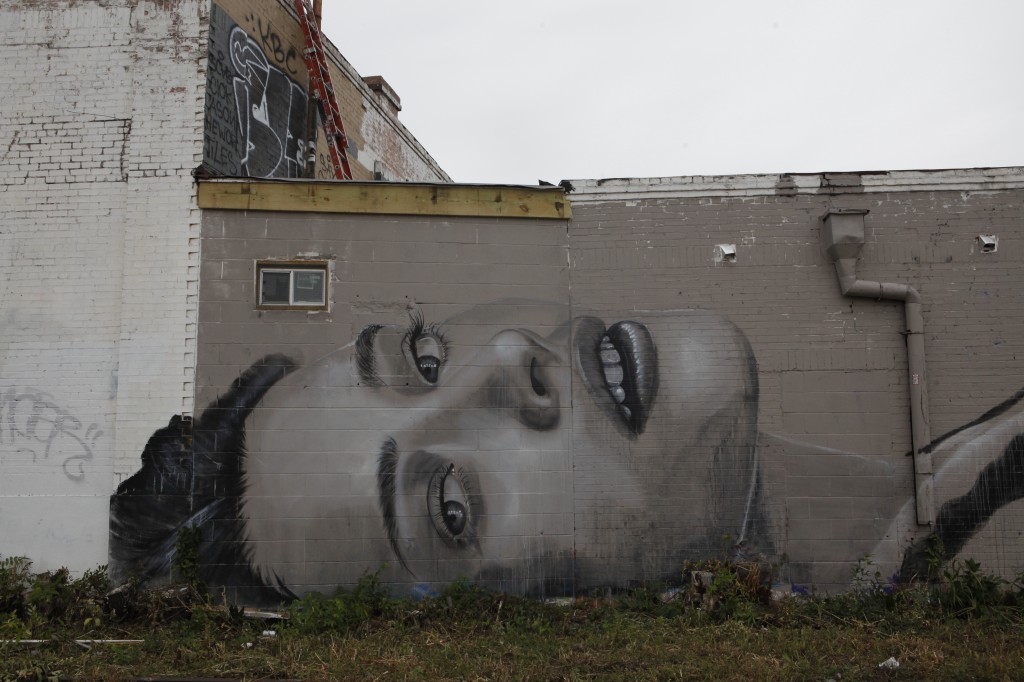 Piece created by Rone, an artist originally from Australia who is famous for doing portraits. The piece is located on the corner of 5th and Pedernales street. (Credit: Jamie Balli)

When it comes to fine art and street art in Austin, the lines get a little blurry.

A sense of vibrant creativity has defined Austin for many years now. The city is best known for its colorful live music scene, filled with artists working in a variety of genres. But more recently, Austin has staked out a reputation for being a place for the advancement and exploration of art.

Austin’s famed Castle Hill Graffiti Park on Baylor Street downtown exemplifies this. The large collection of graffiti and street art is now considered a local destination, something tourists and travelers passing through make a point of seeing before they leave.

Street art, such as that which is on display at the park, has spread throughout Austin. Murals around town, like the University Co-op at the University of Texas campus, serve as examples of street art’s influence.

But as Austin grows and more people bring their business to the city, a new market has emerged for private commissions, pieces tailored more for an individual than for public perusal. Thus began the demand for Austin’s artists to produce fine art. 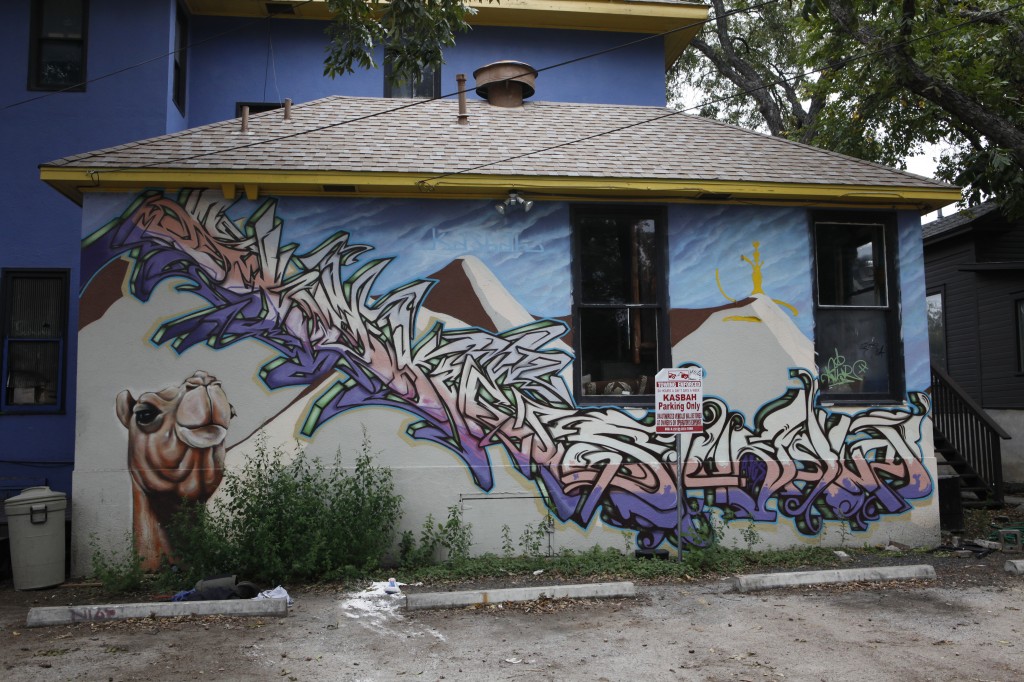 This piece done by Sloke, Rei, and Spain is located behind Kasbah Hookah Lounge on 28th and Guadalupe street.The camel is designed to compliment the Moroccan lounge. (Credit: Jamie Balli)

This separation makes for some important differences in the actual creation of each piece. While fine art is meant to be owned by an individual and must suit the taste of a buyer, street art can be created free from such concerns. An artist is better able to communicate their own message or push perceived boundaries.

But there are financial issues which must be considered. For all the good a message sent might do, it won’t necessarily put food on the table. And even if an artist does decide to focus on monetary gain, there’s no guarantee that they’ll be able to sustain themselves.

Rachel Stephens of the Wally Workman Gallery sees many artists who face these kinds of struggles, and attributes some of that difficulty to a customer base that can’t keep up with the number of aspiring creators in town.

“Even today, very few galleries are able to survive because the collector base is still somewhat limited,” Stephens said.

Stephens sees adaptability as key for local artists trying to make a career out of their passion.

“I think that many Austin artists become jacks of all trades, as not many of them have been able to support themselves solely with their fine art,” Stephens said.

Artists may also be helped by having a willingness to expand the breadth of their work. Some residents who have an appreciation for Austin’s reputation for public art displays may wish to see similar works commissioned for themselves, blurring the line between art that is categorized as “fine” or “street.” 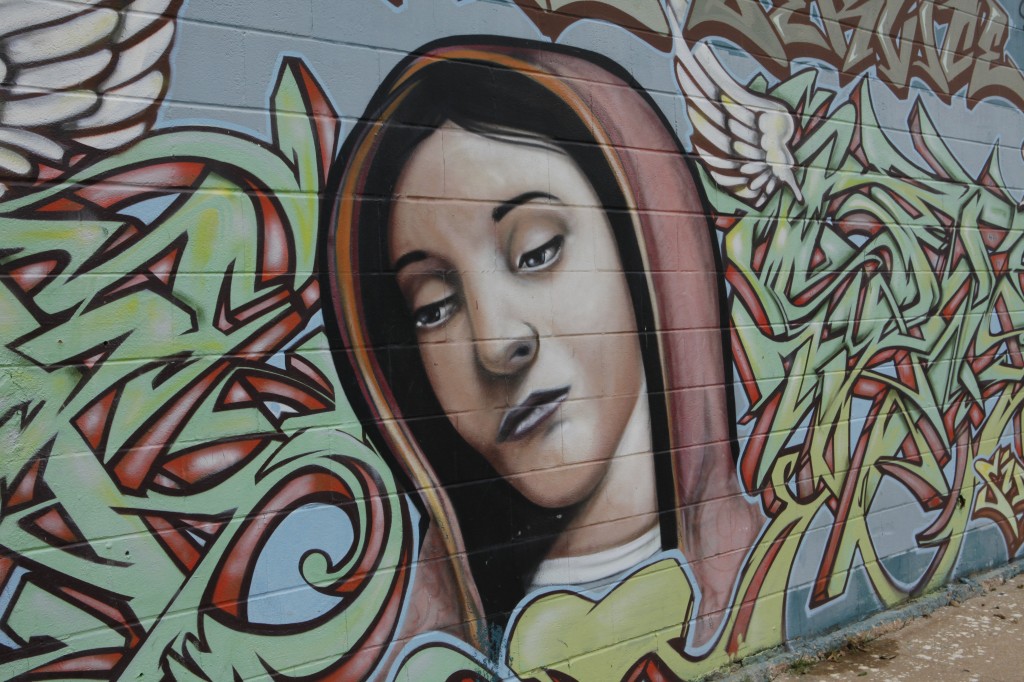 The Virgin Mary, a piece created by Sloke and Rei is located on Cesar Chavez and Pedernales street. It was created with other art pieces around the wall that are dedicated in celebration of Dia de los Muertos. (Credit: Jamie Balli)

“Who really defines fine art? I think the pieces of street art that go beyond self-serving graffiti and intelligently speak to a larger context can be considered fine art,” Stephens said.

While this may be true, Bryer is quick to note that, in his experience working in a gallery, he has found that not everything that works on the side of a brick wall can be expected to sell and generate income for an artist. Even if it isn’t purely self-serving.

“Not everyone wants a skull painting in their kitchen,” Bryer said.

While making it work as an artist and finding the right middle ground between one’s passions and the realities of the art business may be difficult, it can be done. Roshi K works as an artist in Austin and has produced many commissioned pieces for clients, such as Fun Fun Fun Fest and the Victoria Festival. She has found that the key to transitioning from working on the street to being a professional may lie in making the right connections and aggressively pursuing clients.

“(You need to) do well at marketing yourself and putting yourself out there, and you’re working and talking with people, which means you can’t be shy,” Roshi said.

Roshi also emphasizes the importance of striking the right balance between quality and quantity, producing enough to work to create a healthy reputation while also making sure that each piece is up to one’s standards.

And having some talent doesn’t hurt either.

“It’s one of those things where if you’re producing a ton of amazing pieces, of course that’s going to be more likely to catch a lot of people’s attention,” Roshi said. 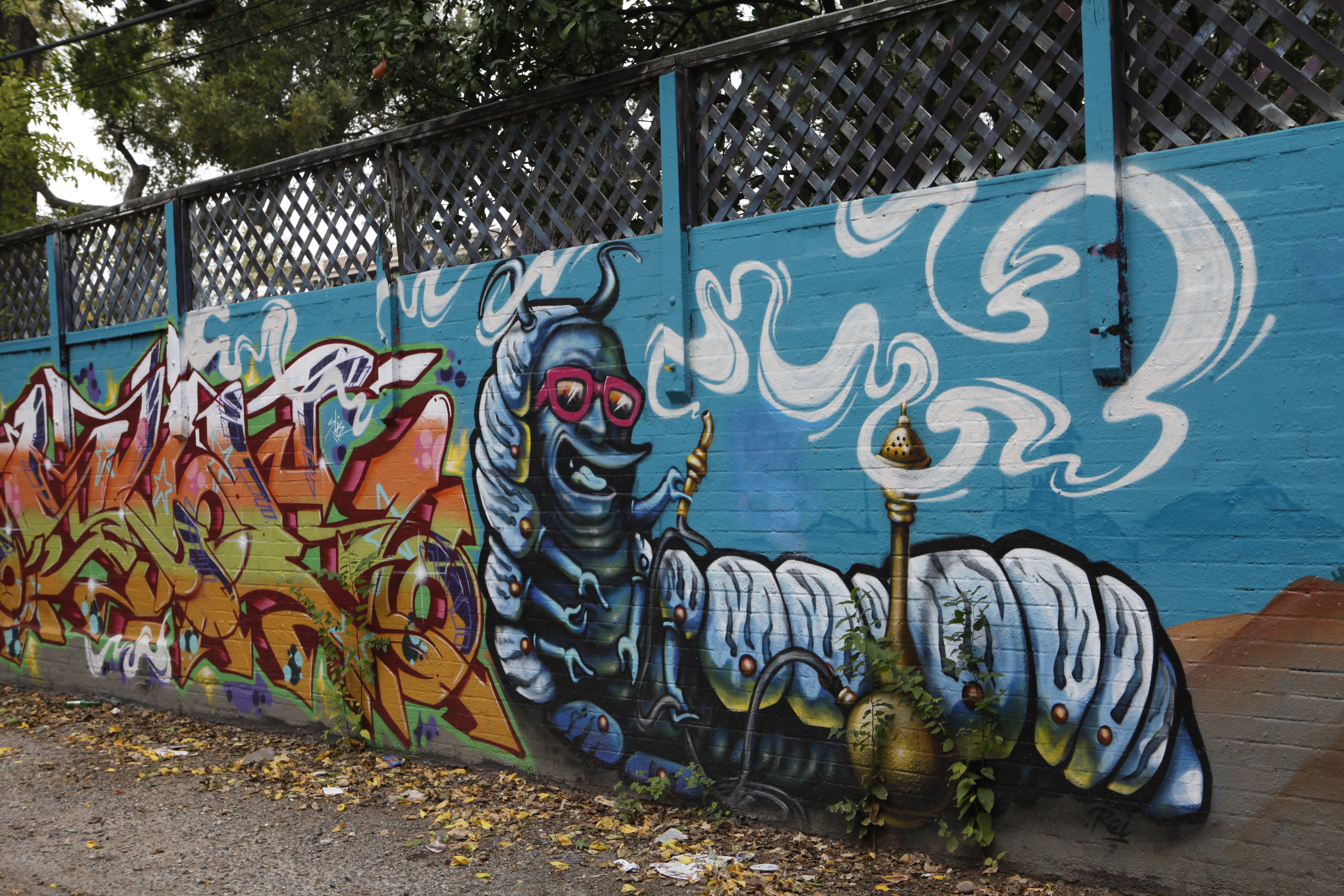 The caterpillar smoking hookah is a promotional piece by Sloke, Spain, Mez and Site for Kasbah Hookah Lounge. The piece is located behind the business along with other designs. (Credit: Jamie Balli) 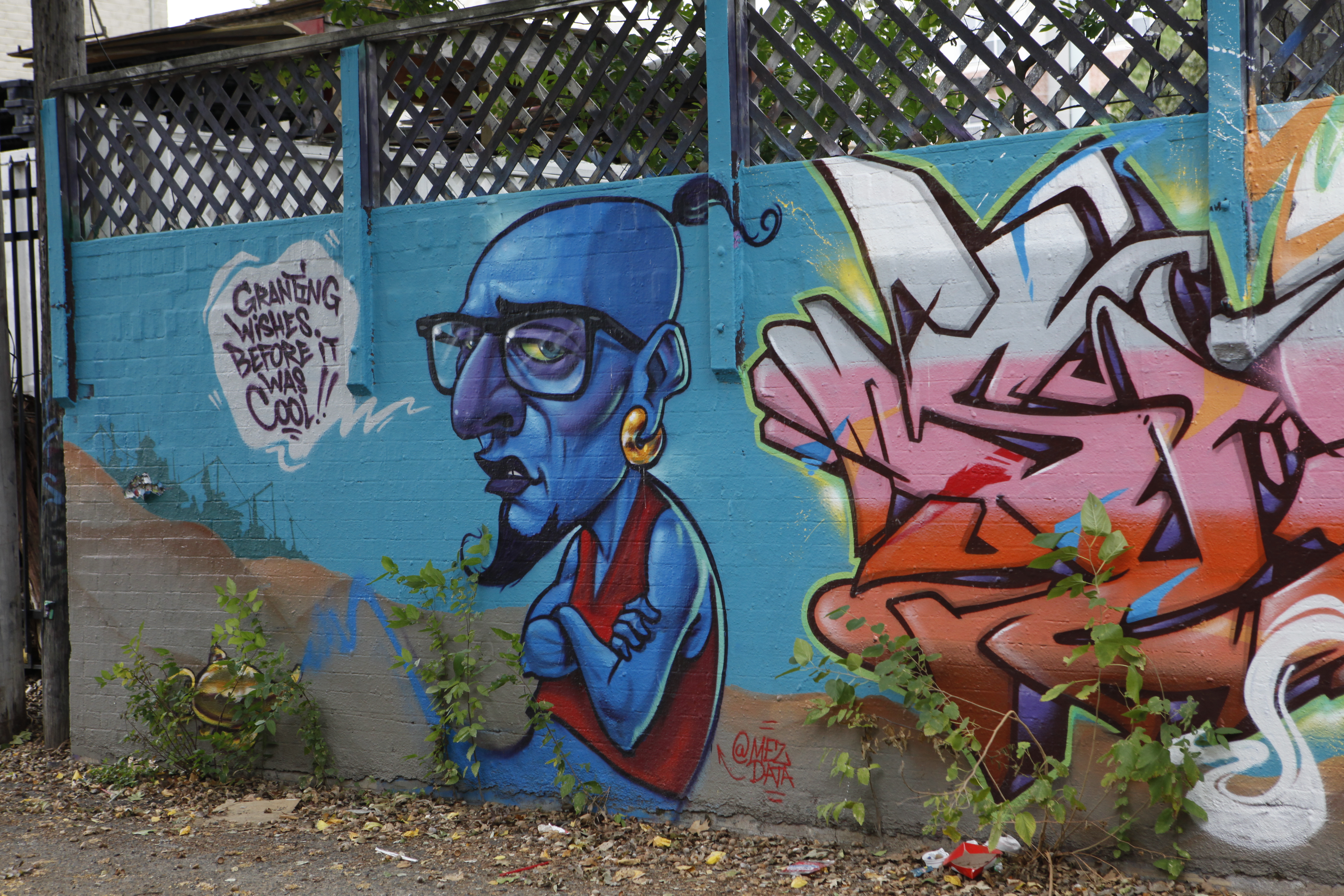 The character Aladdin is featured in a piece by Nate that is located behind Kasbah Hookah Lounge on 28th and Guadalupe street. The piece ties into the Moroccan theme. (Credit: Jamie Balli) 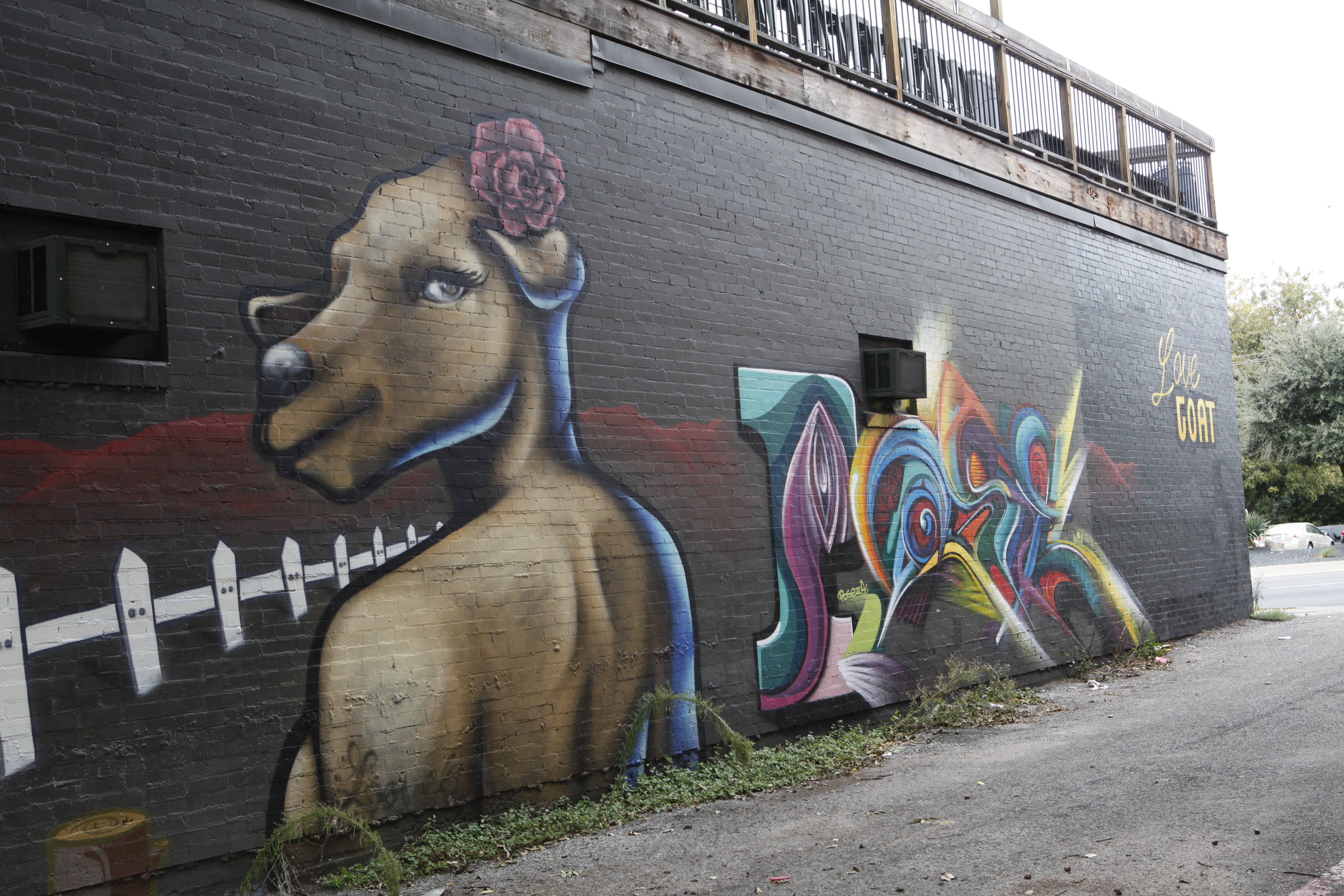 This art piece displayed on the wall outside of Love Goat, a local bar near West Campus, matches the name of the bar by featuring a goat in the image. (Credit: Jamie Balli) 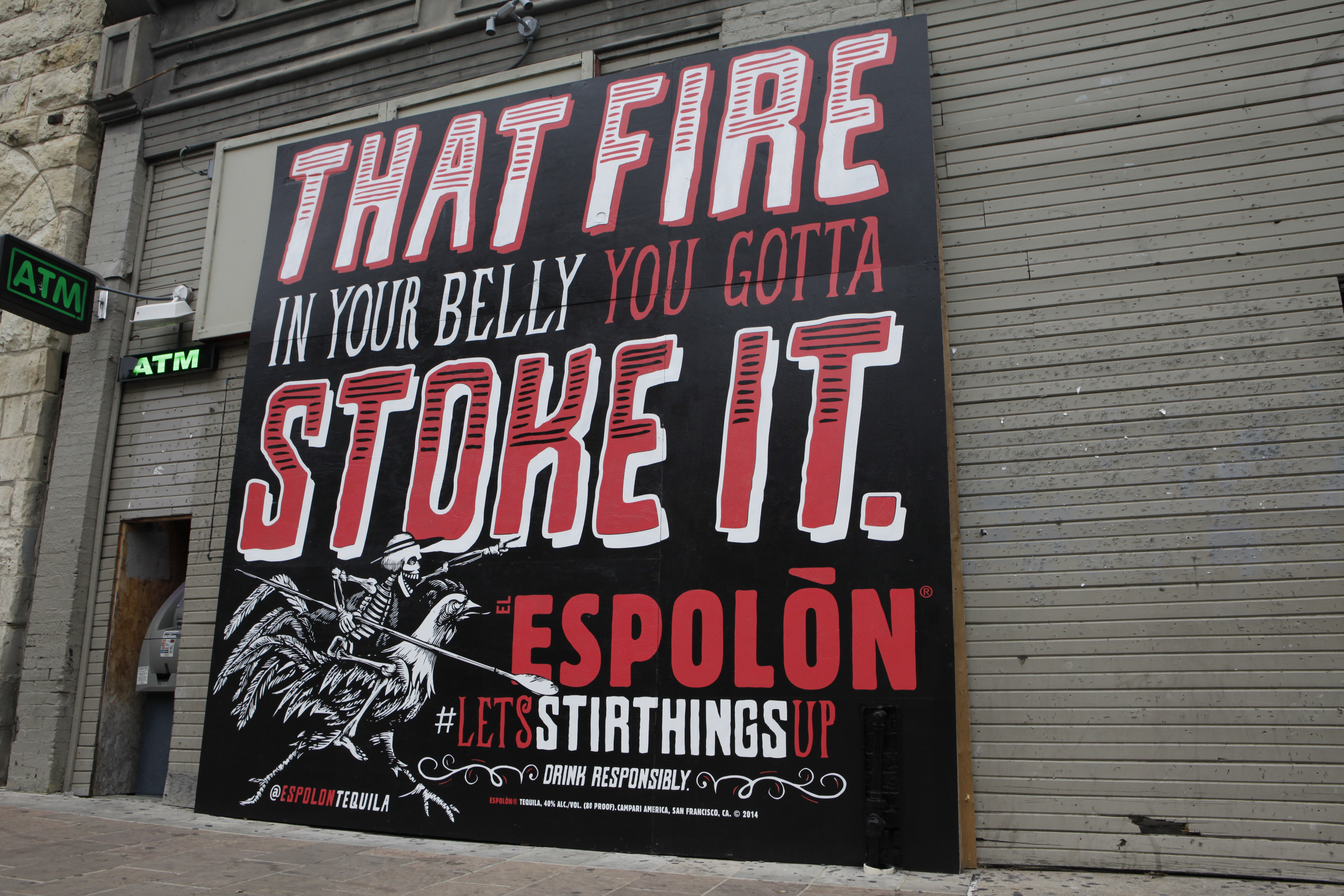 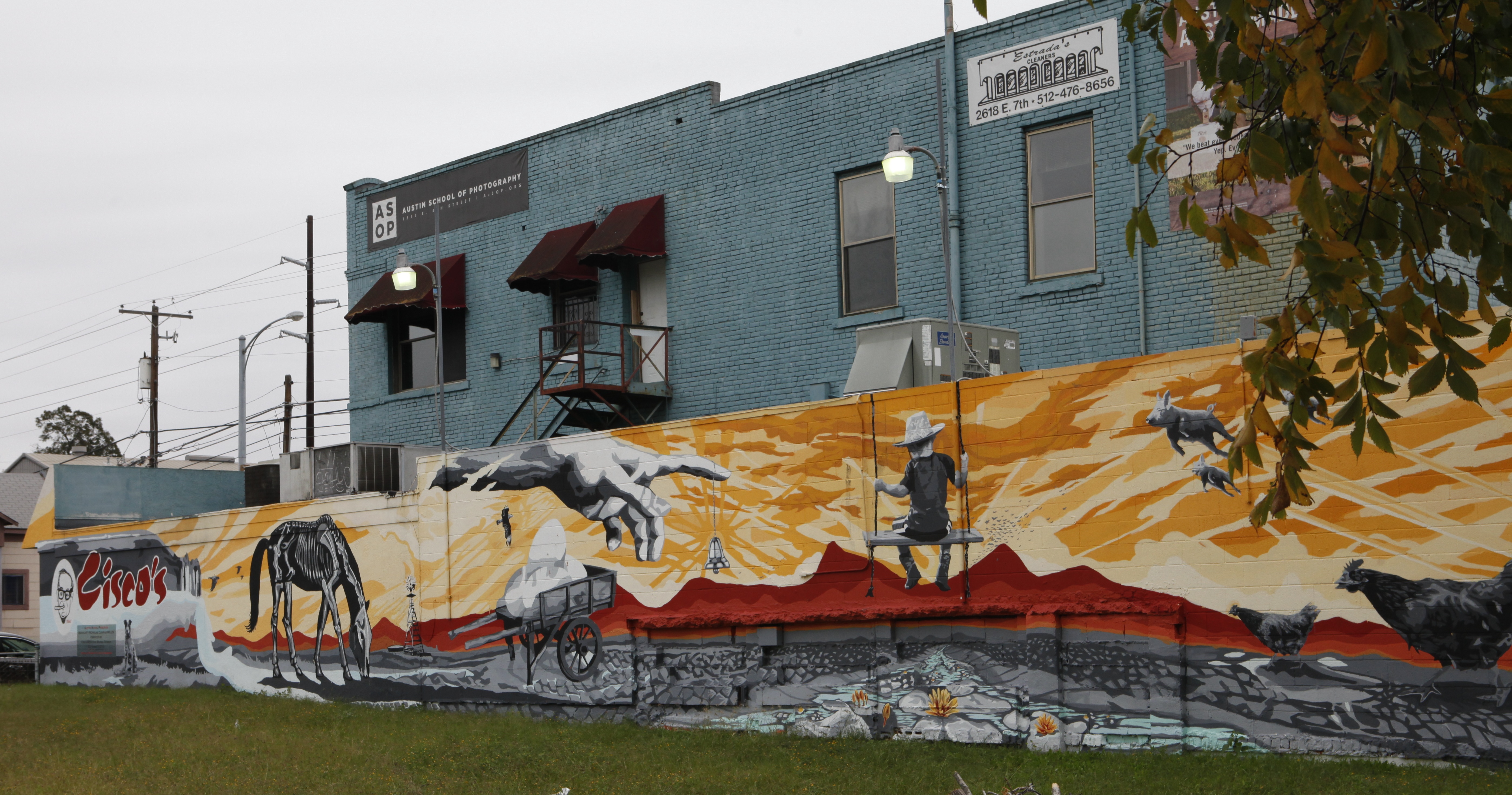 This art piece located behind Cisco's restaurant, illustrates a Hispanic theme that is combined with a creative twist. (Credit: Jamie Balli) 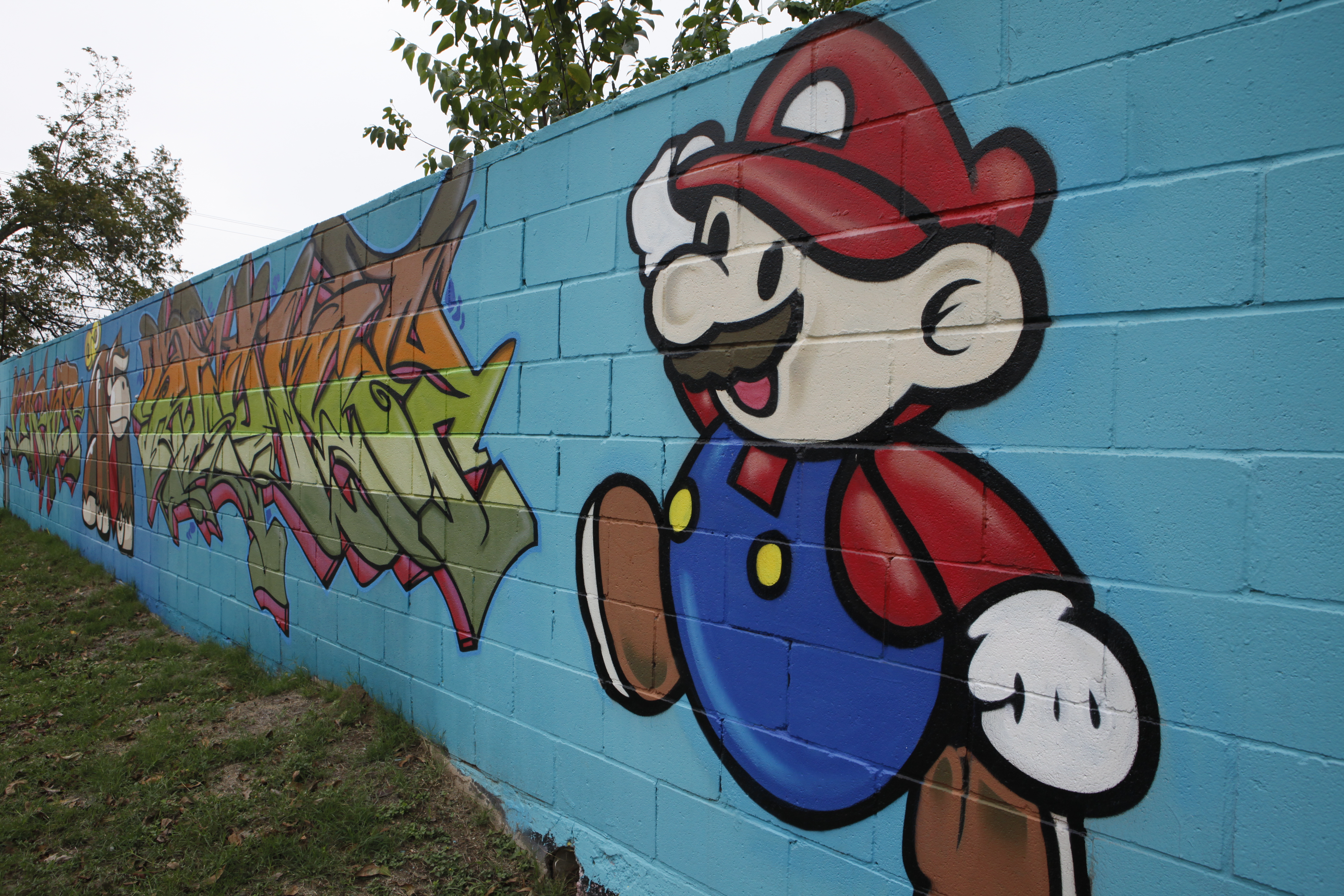 This Mario themed piece, completed by Sloke and Spain, was created as a design for the children in the local neighborhood. It is located on 5th and Springdale street. (Credit: Jamie Balli) 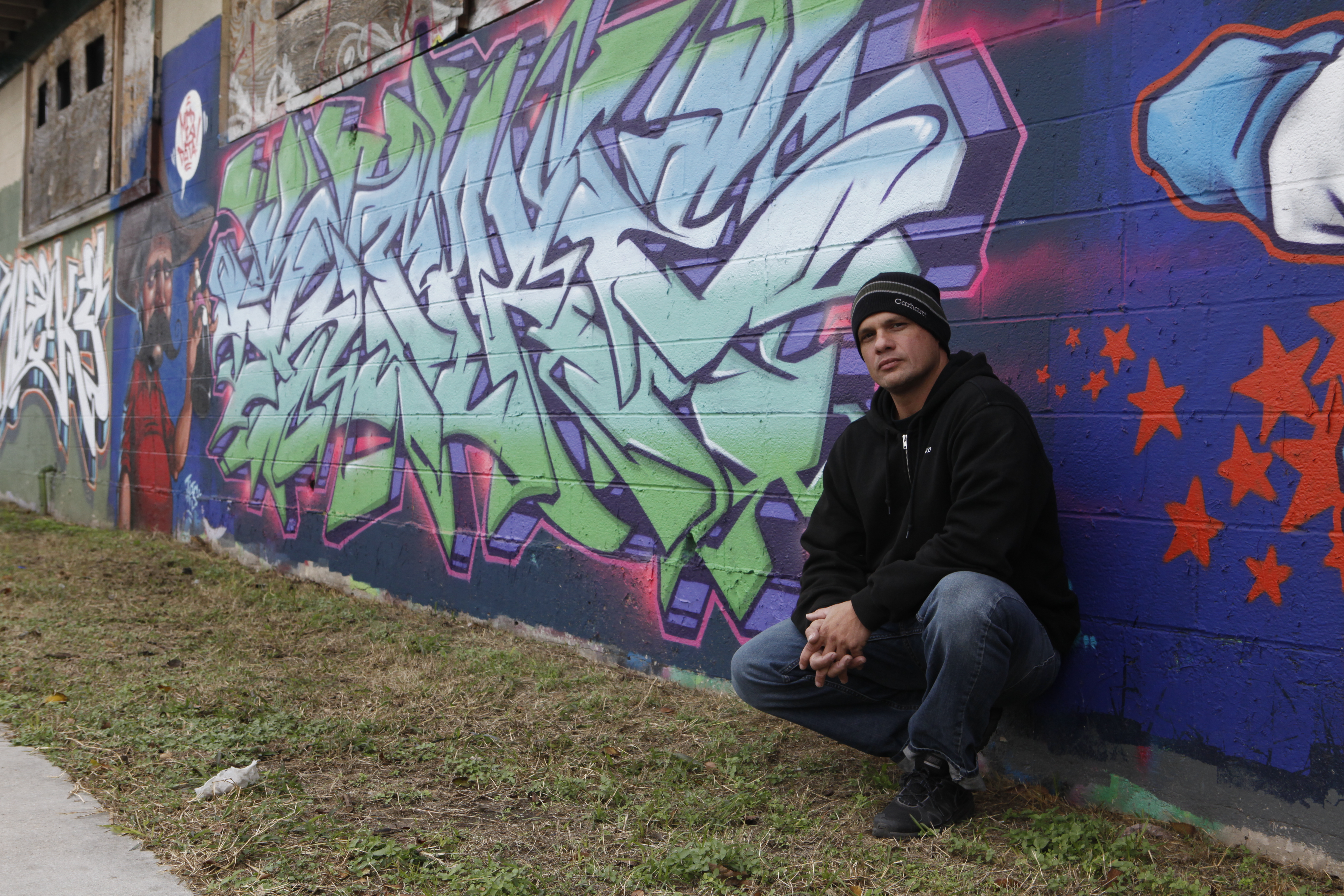 Sloke, featured by his piece that was completed with contributions from Mez and Wizart in 2014. The piece is located at 405 Springdale st. (Credit: Jamie Balli) 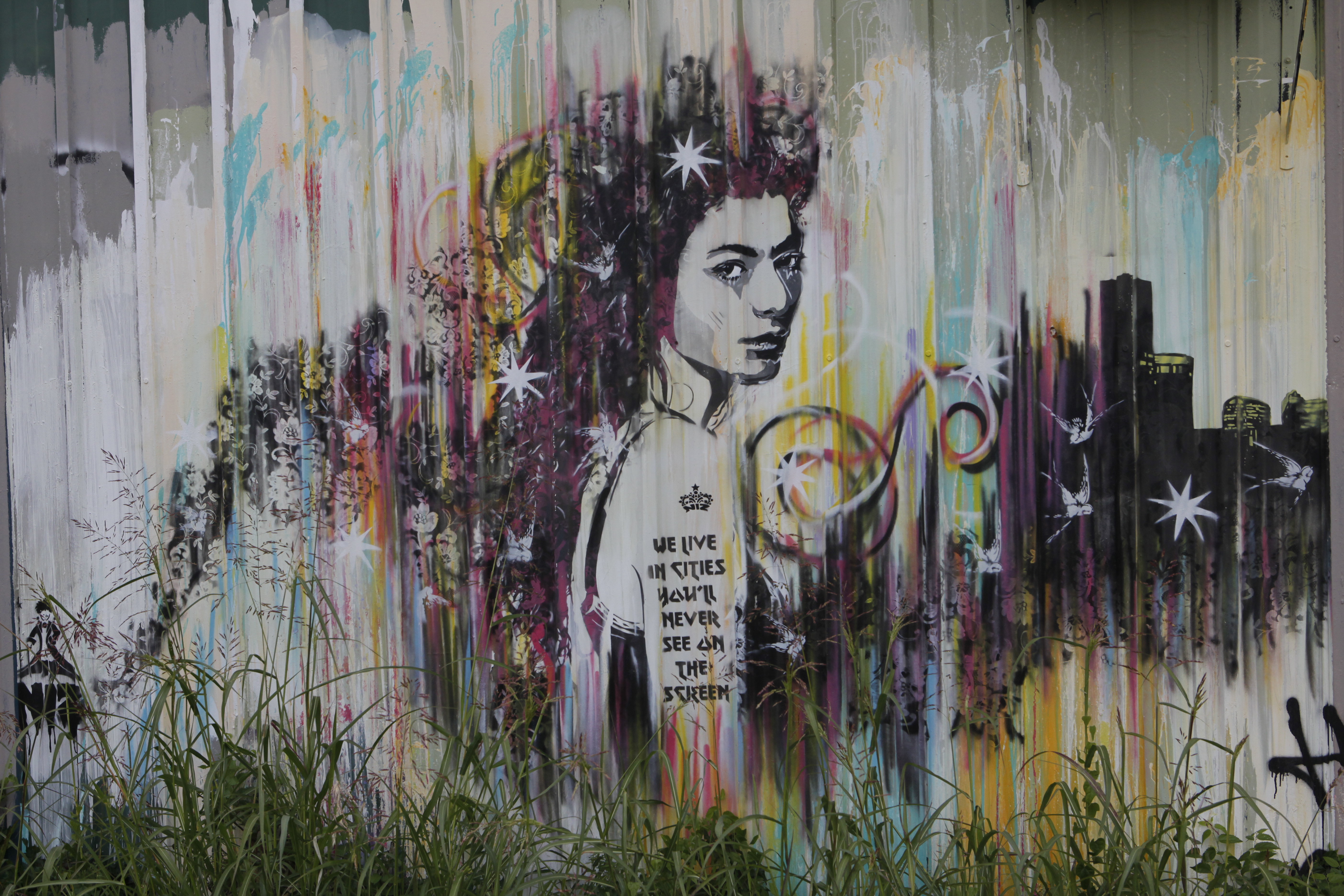 Niz, an artist known for stencil art, created this piece which is found on 5th and Pedernales street. (Credit: Jamie Balli) 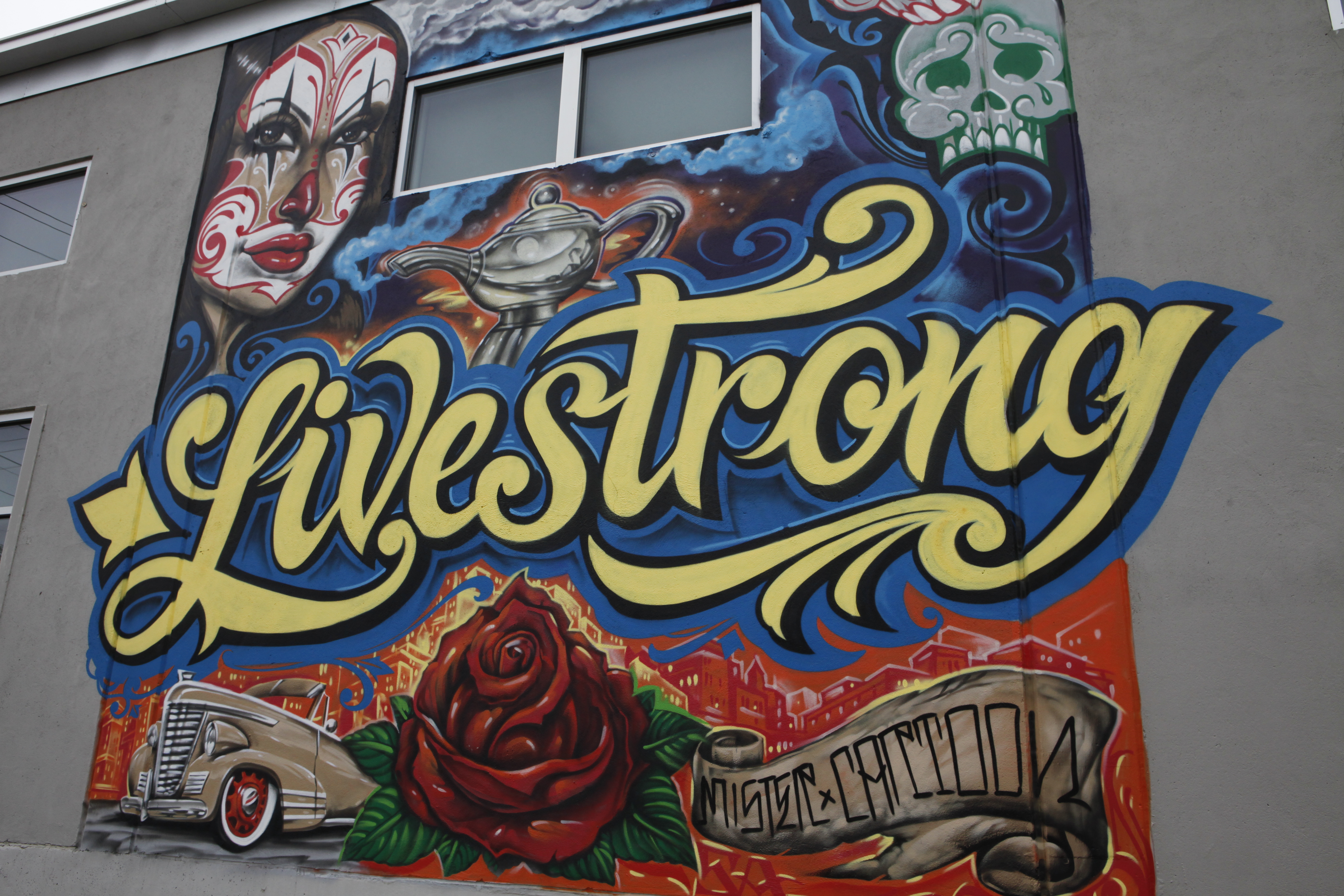 The Livestrong Mural, located on 5th and Pedernales street, was completed by Mr. Cartoon who is an artist from Los Angeles, California. The piece, created about three years ago, uses elements of spray can art. (Credit: Jamie Balli) 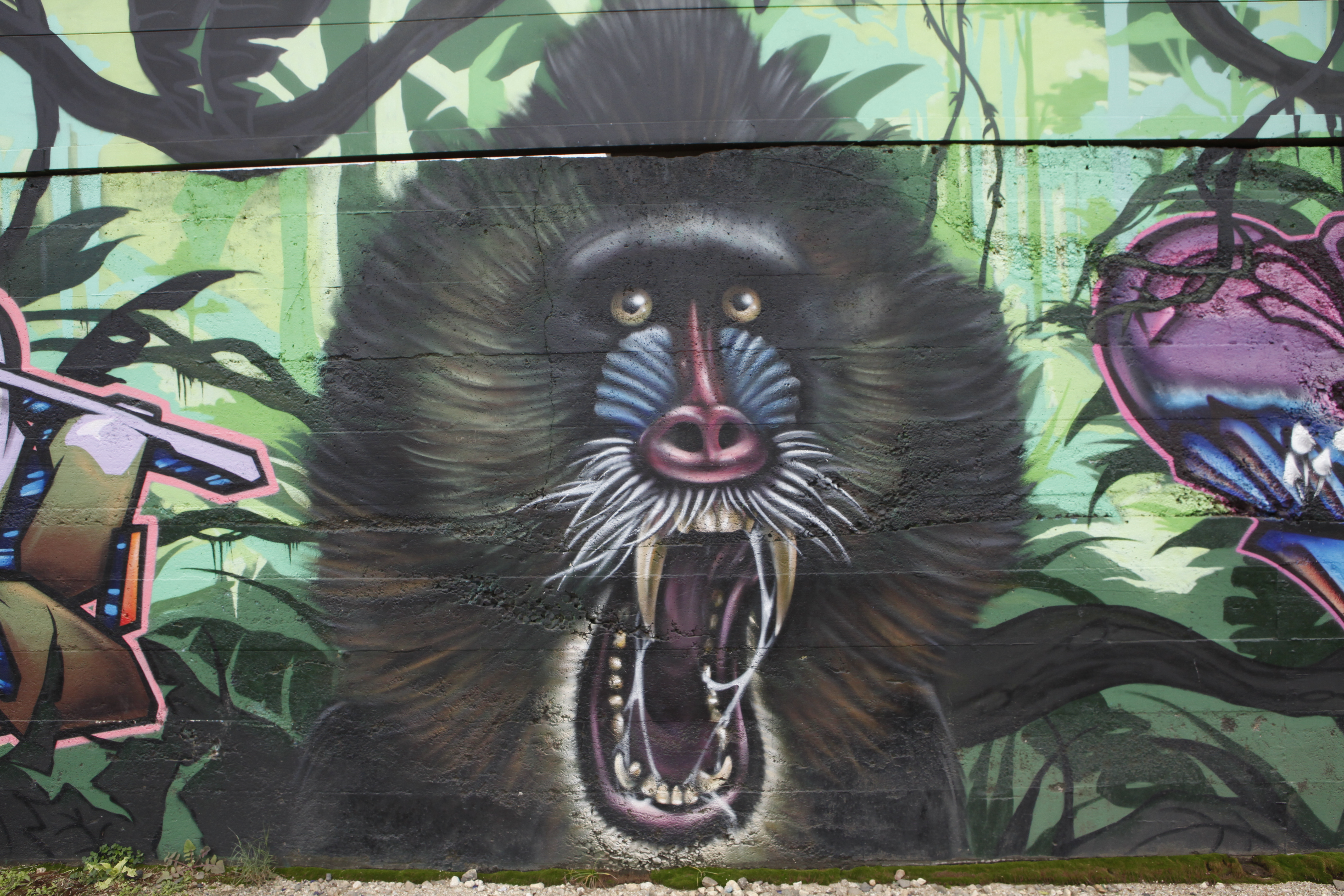 Austin Metal and Iron Works mural, located on 4th and Medina street, was designed by artists from California, Chicago, Texas, and Ohio to mark the 100 year celebration of the recycling company. The jungle-themed mural was completed for the recycling company during SXSW and is a tradition that takes place almost every other year. (Credit: Jamie Balli)