It was a cold, Saturday morning as rain covered the empty streets of downtown Austin. The city seemed to be sleeping but under Ann W. Richards Congress Avenue Bridge, commonly referred to as “The Bat Bridge” by Austinites, the very first Austin Duck Derby was taking place. 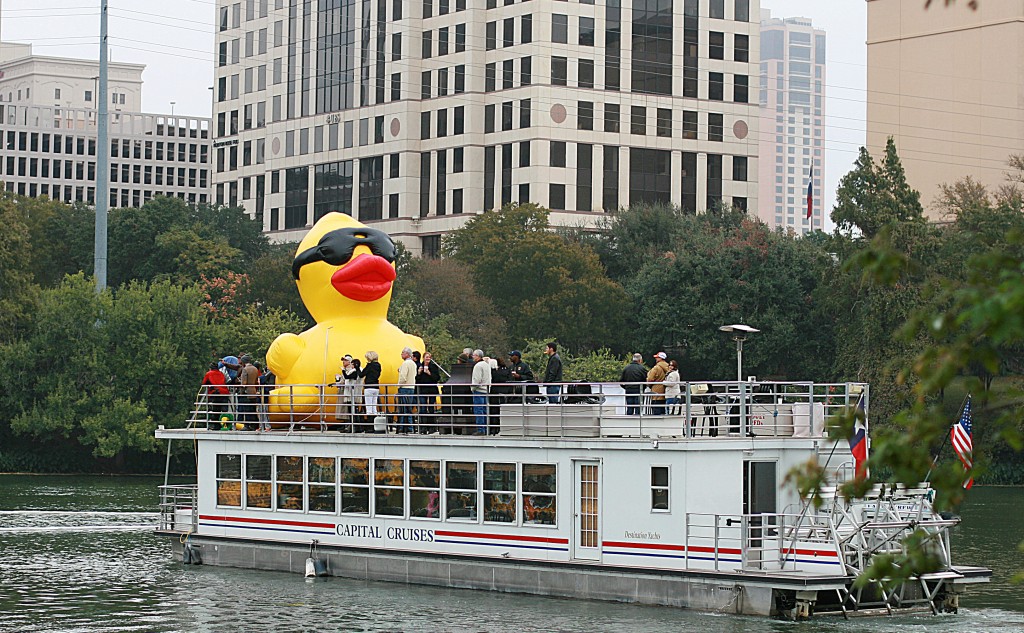 At the event, several people walked around sporting yellow duck-beak whistles while others were dressed in duck-themed attire. The event also featured a duck mascot available for pictures, dancing, and entertainment.

The Austin Duck Derby, held on Nov.15, launched a mass of more than 10,000 yellow rubber ducks into Lady Bird Lake. The ducks raced to the finish line to win prizes for their adopters. The ducks, which were bombarded into the water from the top of the bridge, marveled the kids and parents that happily awaited near the shore, bundled in hats and furry coats.

Besides the colorful spectacle that the event provided, which also included face painting, hula hoopers and live music, the purpose of the race had a serious goal in mind: to raise much needed fundings for the Boys and Girls Club Foundation, a non-profit organization that supports and provides assistance to the Boys and Girls Clubs of the Austin Area.

Every year, over 12,000 kids (and over 1,700 each day) are nurtured and taken care of in 22 welcoming Austin locations, which provide hope and opportunity to children ages 6 to 18. The centers offer various classes and activities including leadership development, arts, health and recreational sports. The club relies on volunteers who offer their time as coaches, tutors and activities assistants. 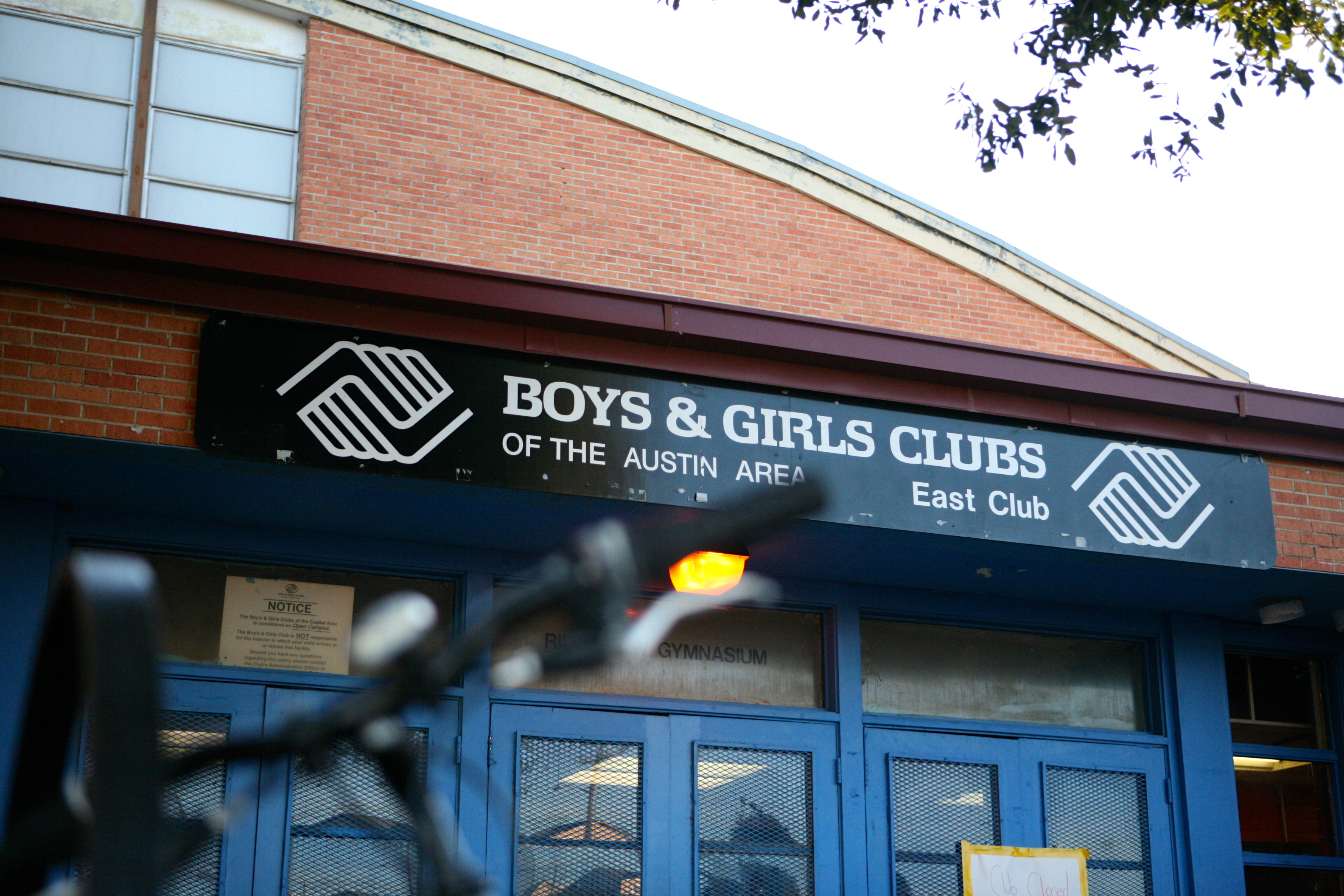 The Boys and Girls clubs of the Austin Area’s mission is to inspire and enable all young people ages 6 to 18 to realize their full potential as productive, responsible, citizens. There are currently 22 clubs spread around the city of Austin and together they serve about 12,000 children each year. Photo by Breanna Luna 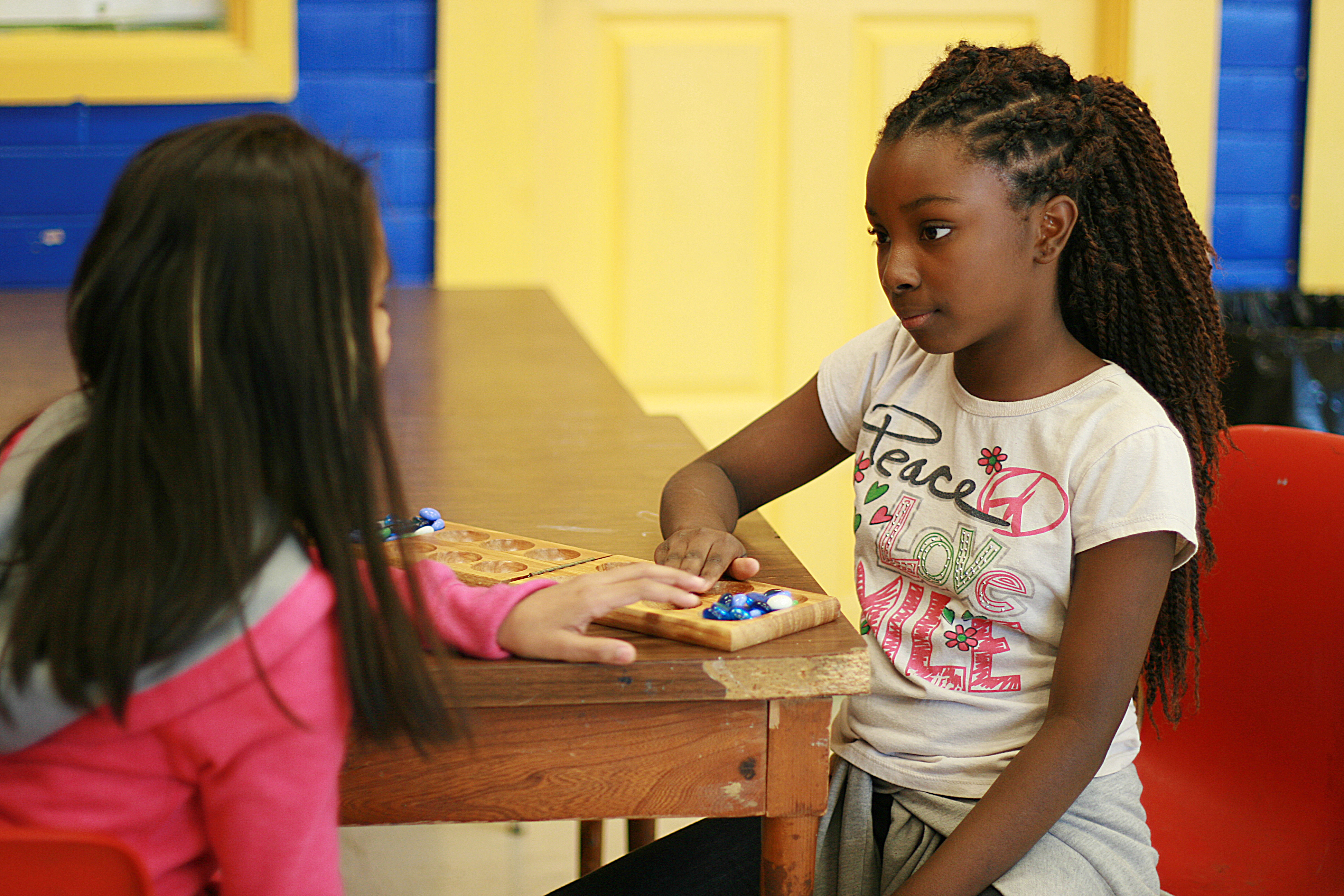 The Boys and Girls clubs welcome children of all races and backgrounds. The Austin area shows a predominance of Hispanic (57%) and African Americans (32%) children. Most kids fall in the 13-18 and 6-7 age groups (source: bgcaustin.org) Photo by Silvana Di Ravenna. 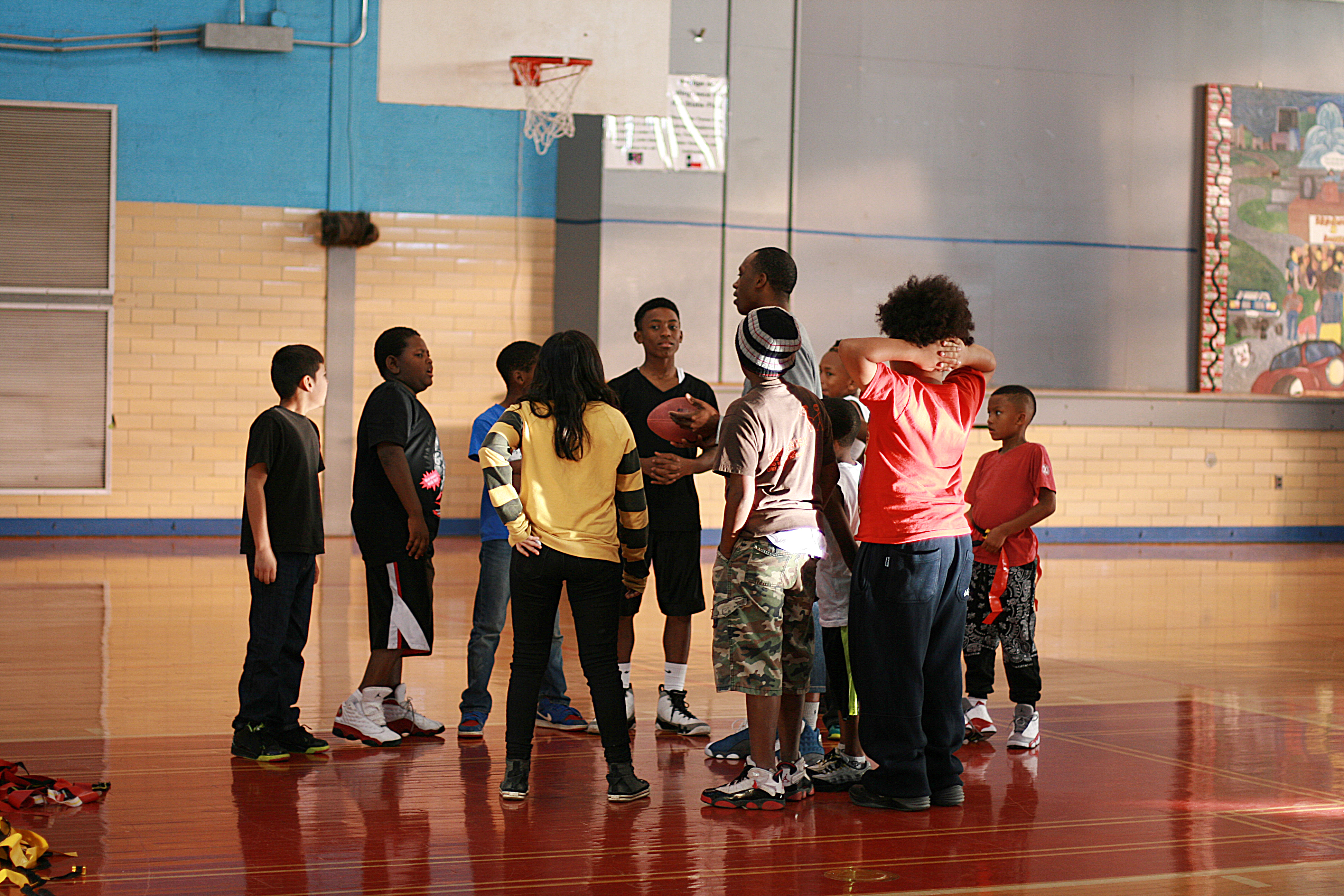 Sport, Fitness and Recreation is one of 5 core curriculum areas the Boys and Girls clubs provide. Volunteering coaches encourage fitness, positive use of leisure time, skills for stress management, appreciation for the environment, and social skills. Photo by Silvana Di Ravenna. 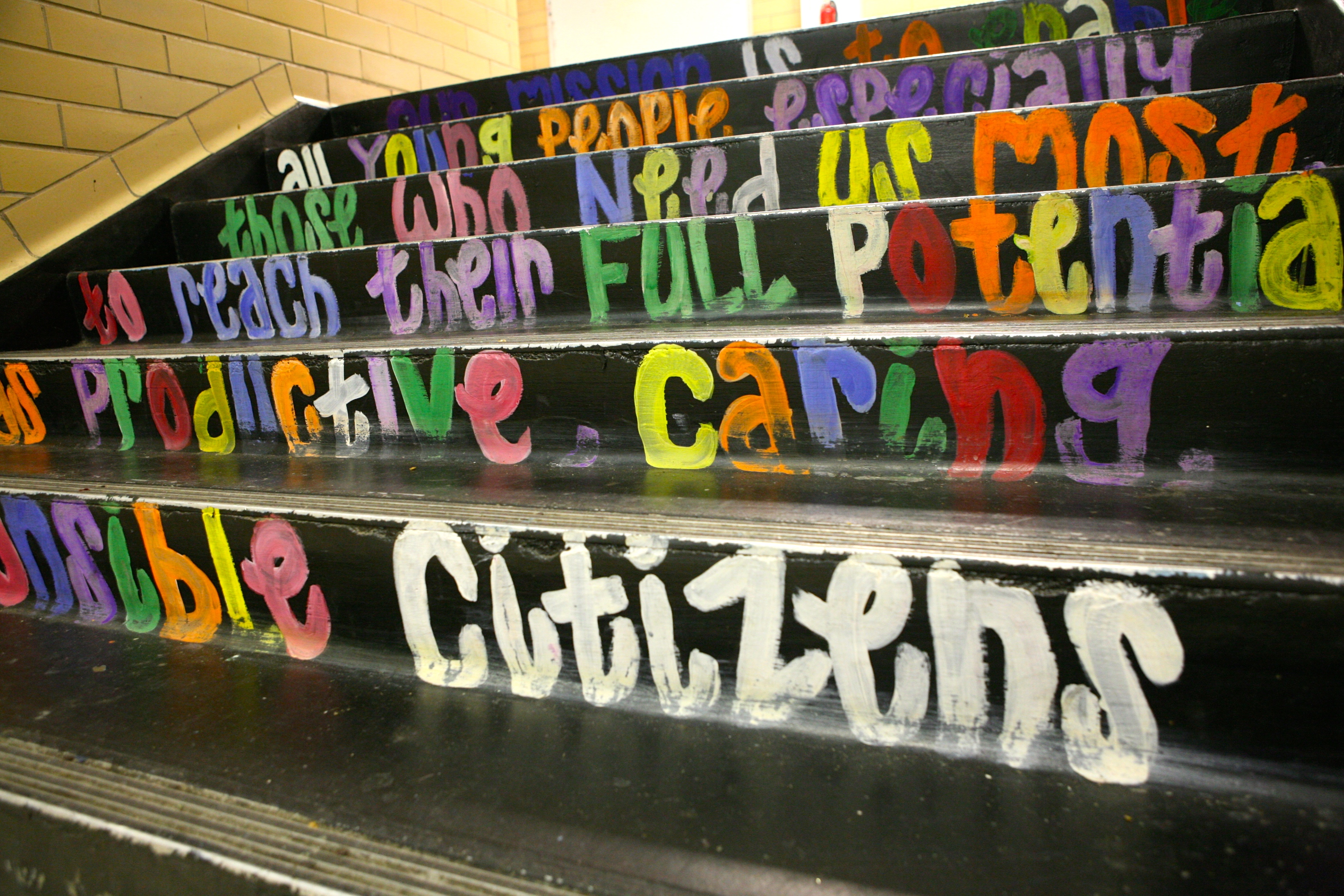 The Non-profit’s message is boldly stated in the stairs of the East Austin Club. It reads “Our mission is to enable all young people, especially those who need us most, to reach their full potential as productive, caring, responsible citizens.” Photo by Breanna Luna. 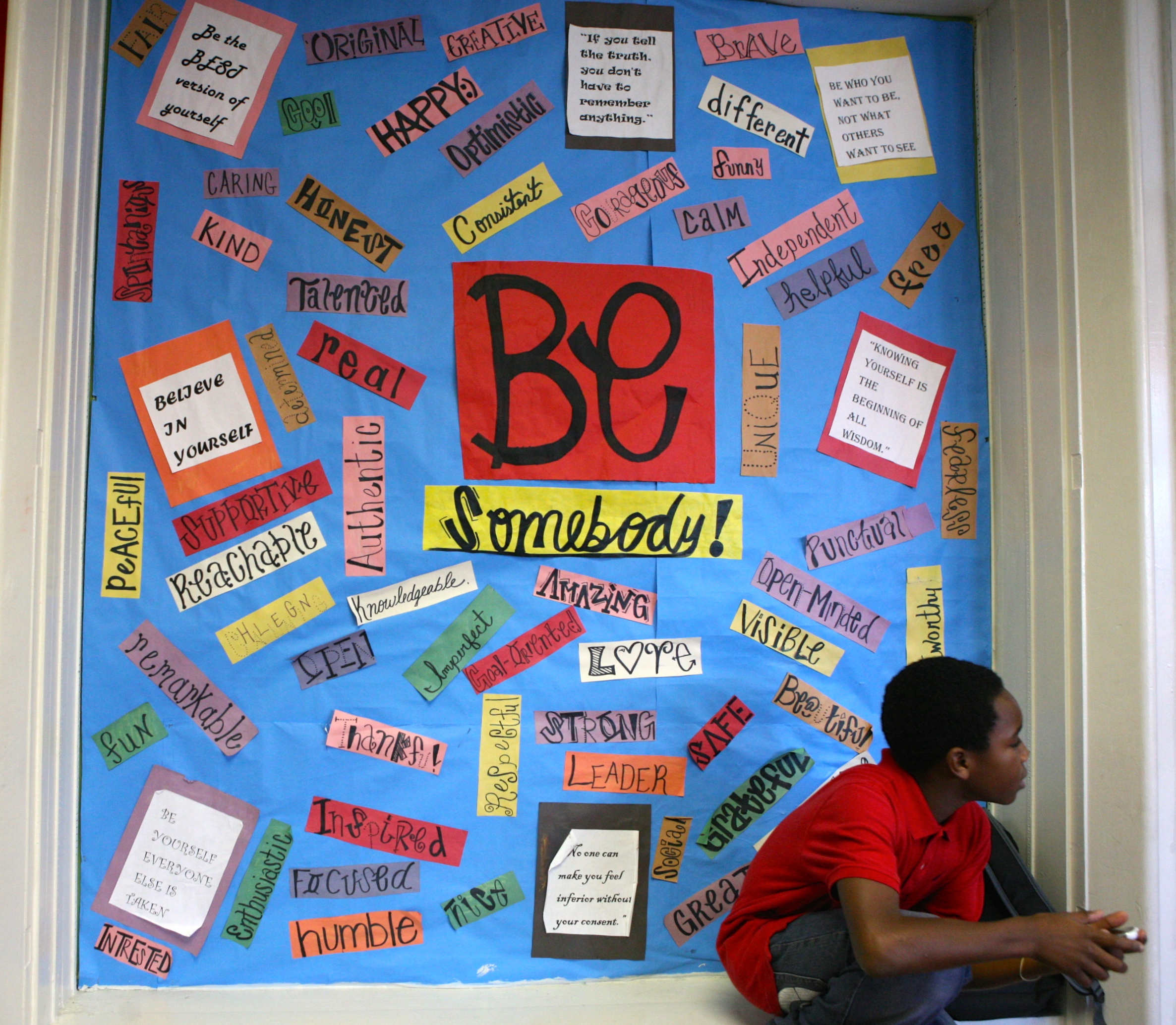 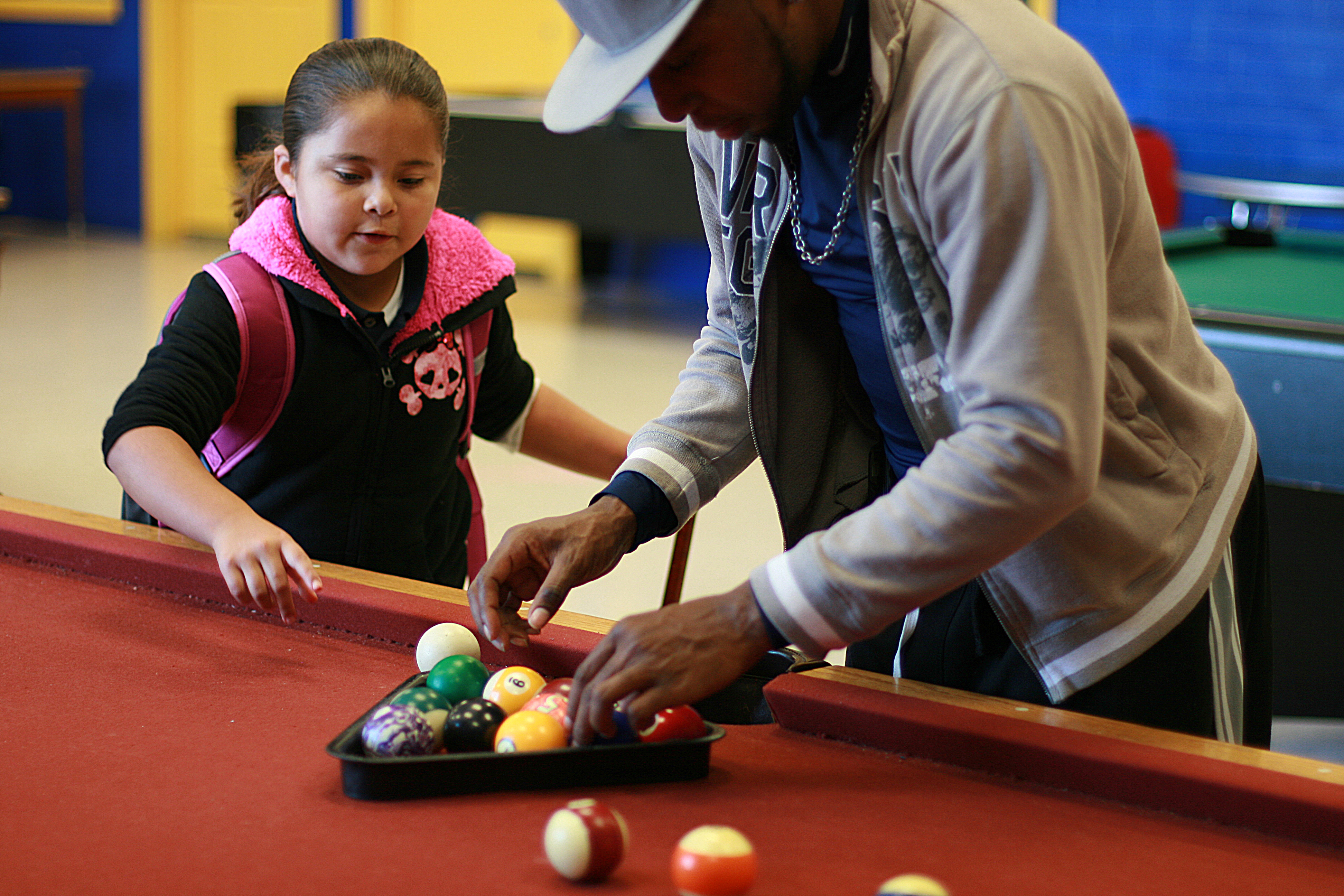 Volunteers play a vital role in transforming the lives of the Club members, and they can have a tremendous impact on a child’s life. The Club offers opportunities for adults to work directly with youth as homework helpers and tutors, activities assistants, coaching and college preparation support. (source: bgcaustin.org) Photo by Silvana Di Ravenna. 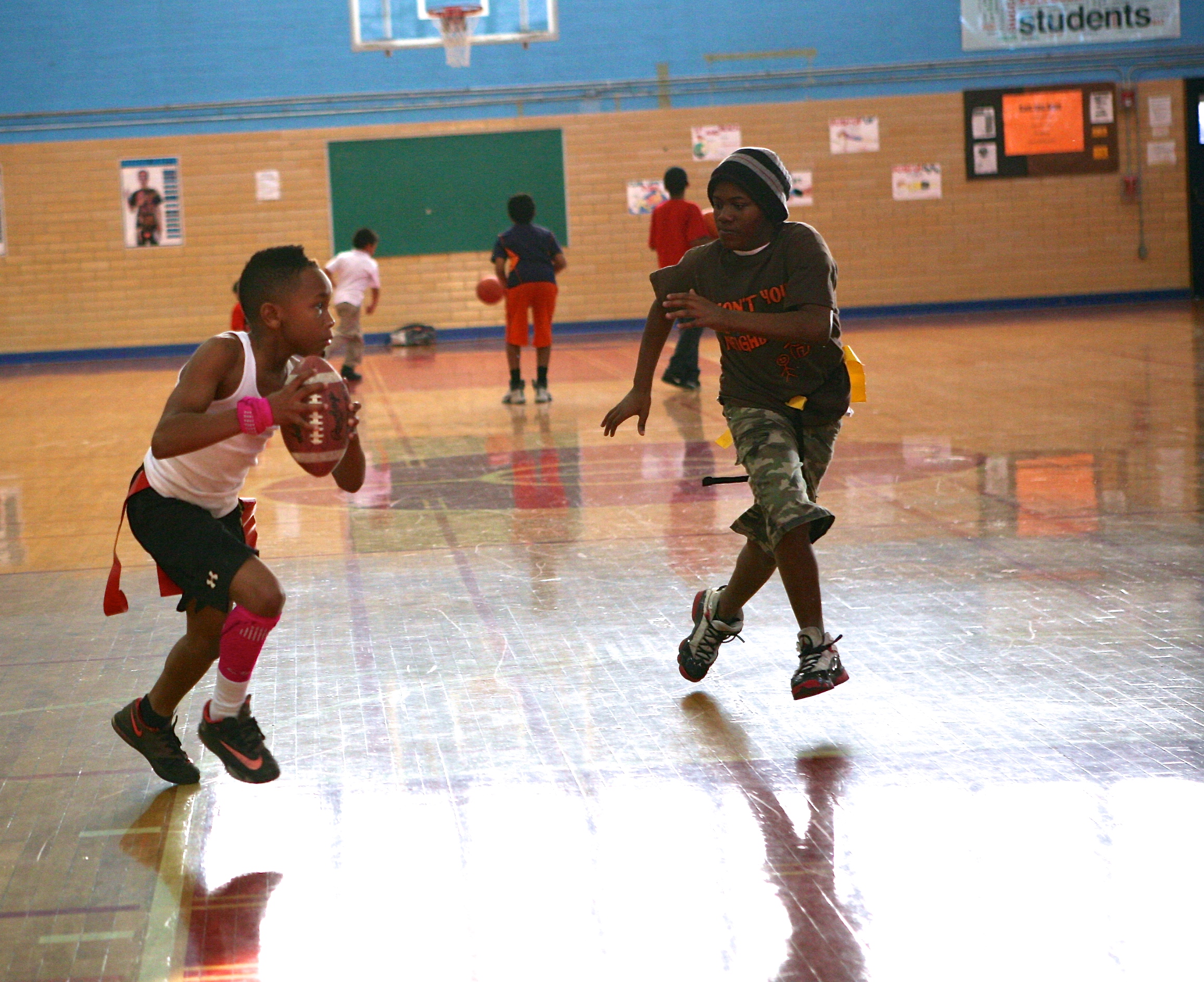 Flag football is one of the many sports the East Austin Boys and Girls advocates as part of their Healthy Habits program. Students also learn healthy eating habits, portion control, and reading nutrition labels. Photo by Breanna Luna 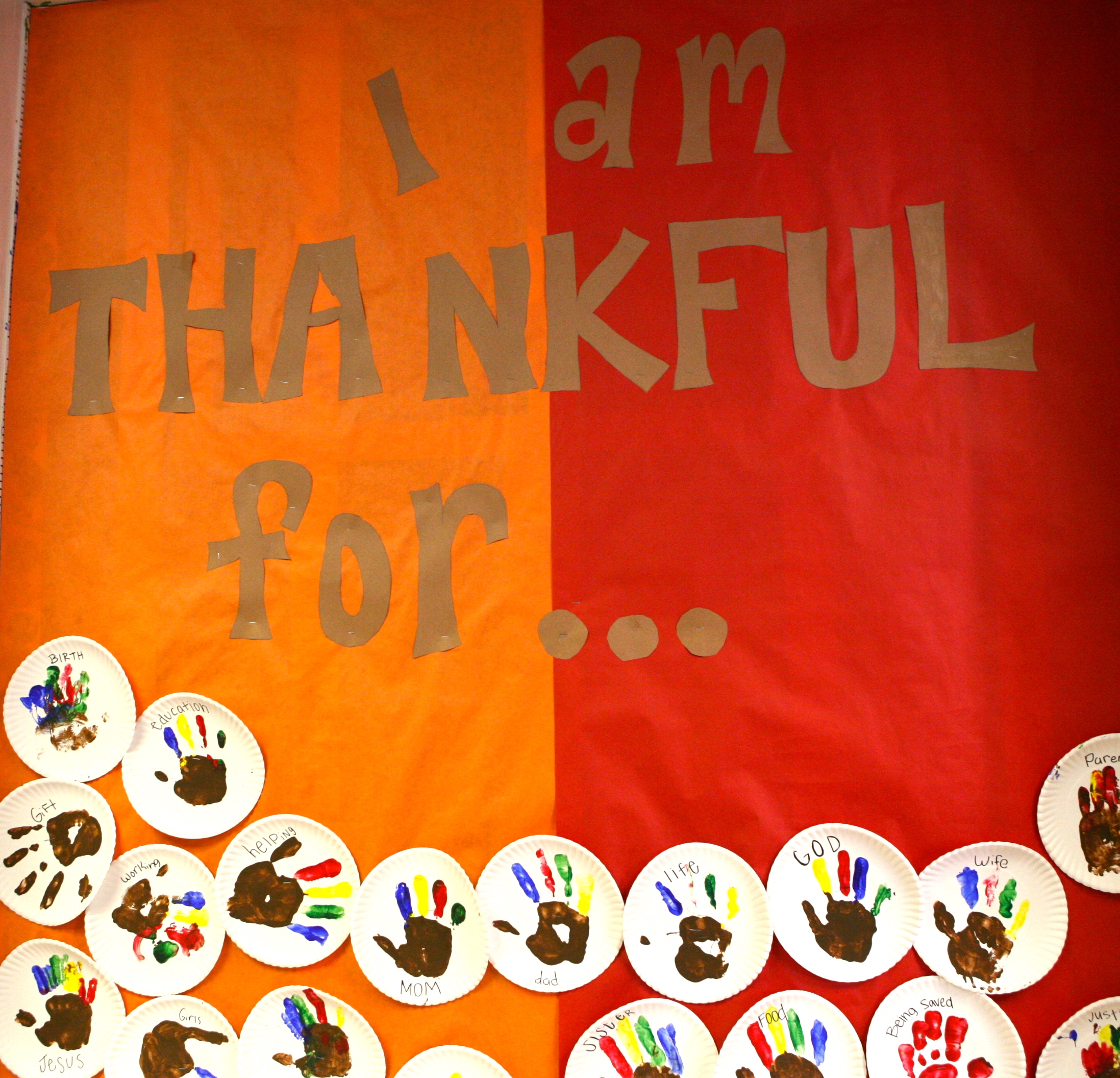 During the holidays, children hand painted one word they were grateful for during Thanksgiving and made turkeys out of their hands. Arts and crafts is one of the five core curriculum area the club focuses on to develop youth’s creativity and cultural awareness. Photo by Breanna Luna 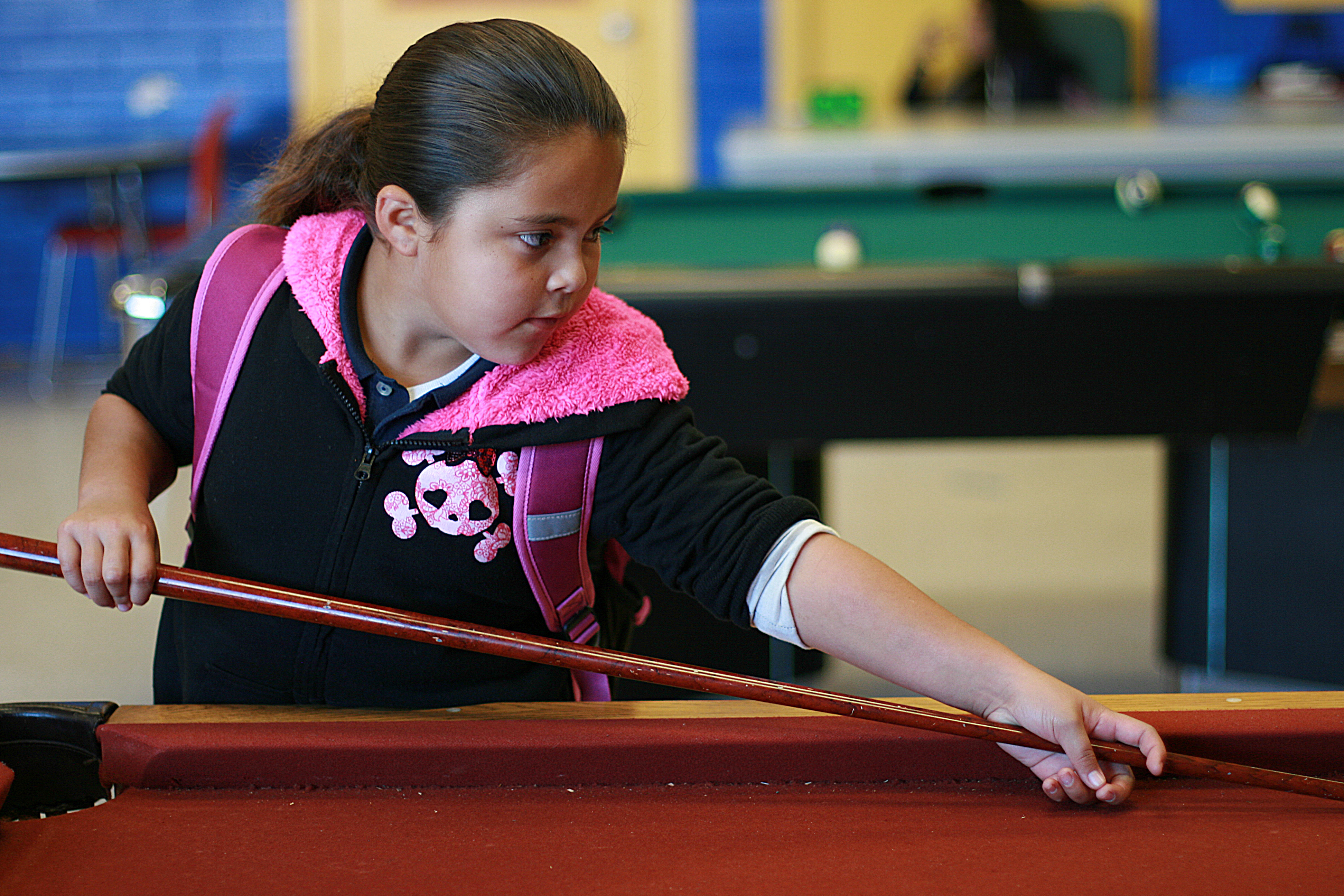 Apart from advocating academic success and healthy lifestyles, leisure time at the East Austin Boys and Girls Club is also an essential role in the club’s formula for impact. Photo by Silvana Di Ravenna 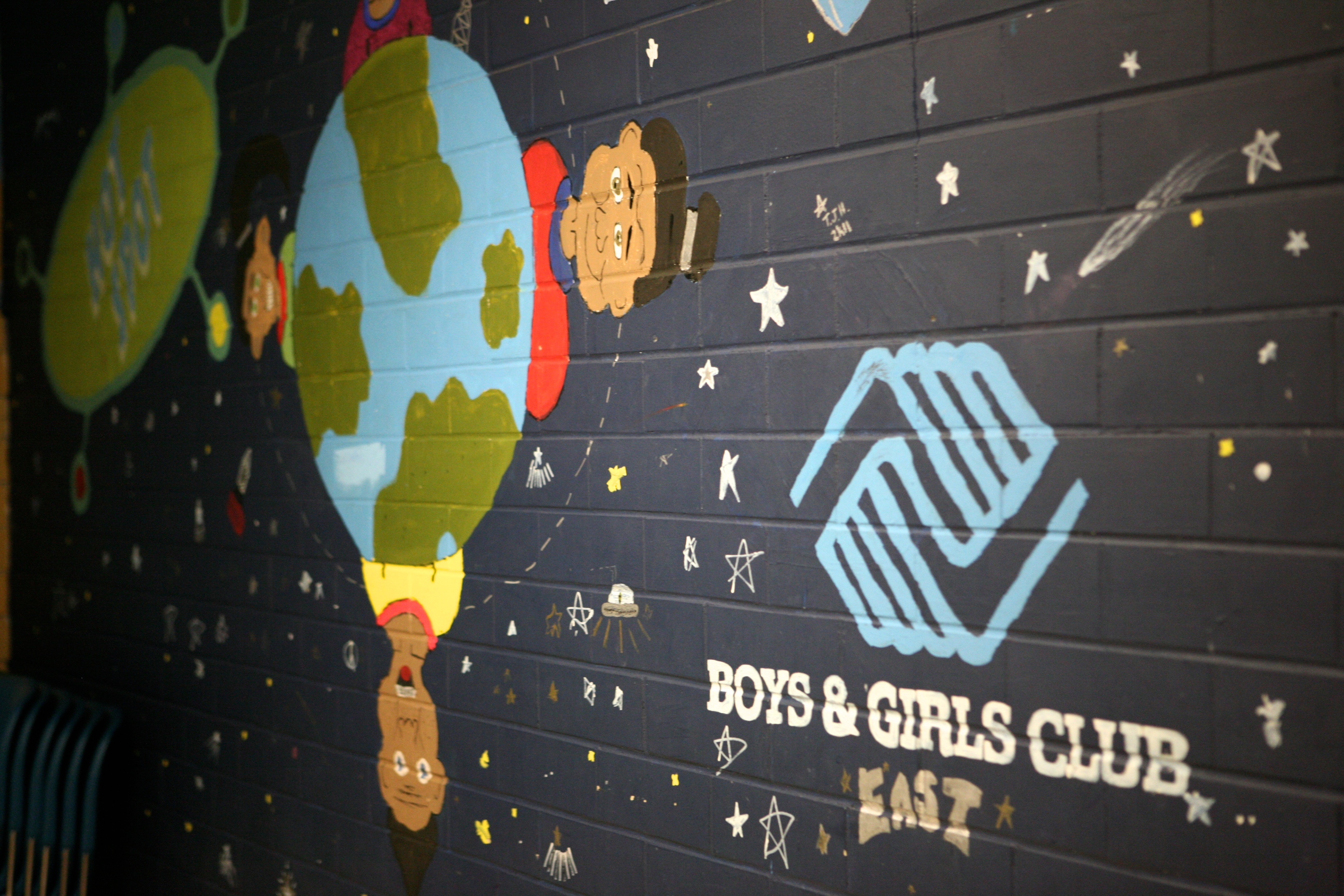 Since 2001, the Boys and Girls club have grown from three clubs to twenty-four. According to bgcaustin.org, the number of kids the clubs serve is up over 700%. They achieved this by networking with Austin ISD, Del Valle ISD, HACA and Southwest Key Programs to provide the facilities, while the club provides the staffing and programs. The results are better students, better citizens, and ultimately, a better world. Photo by Breanna Luna 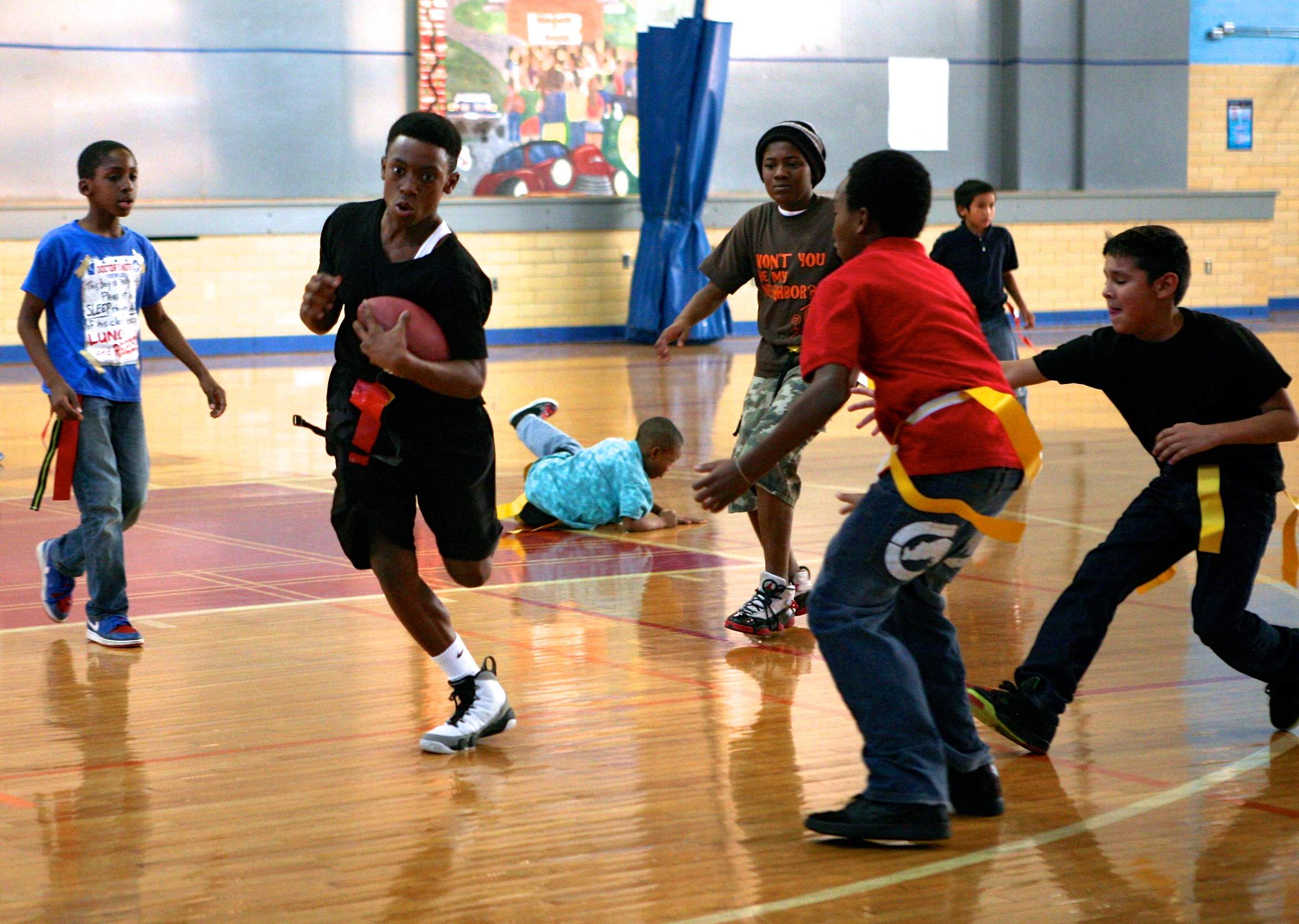 According to the Boys and Girls Club, the most influential time in a child’s life is between 3-8pm every afternoon, after school. Boys & Girls Clubs are open during these 5 critical hours, offering a fun and productive environment to enjoy after school and all day during summer and school holidays. Photo by Breanna Luna 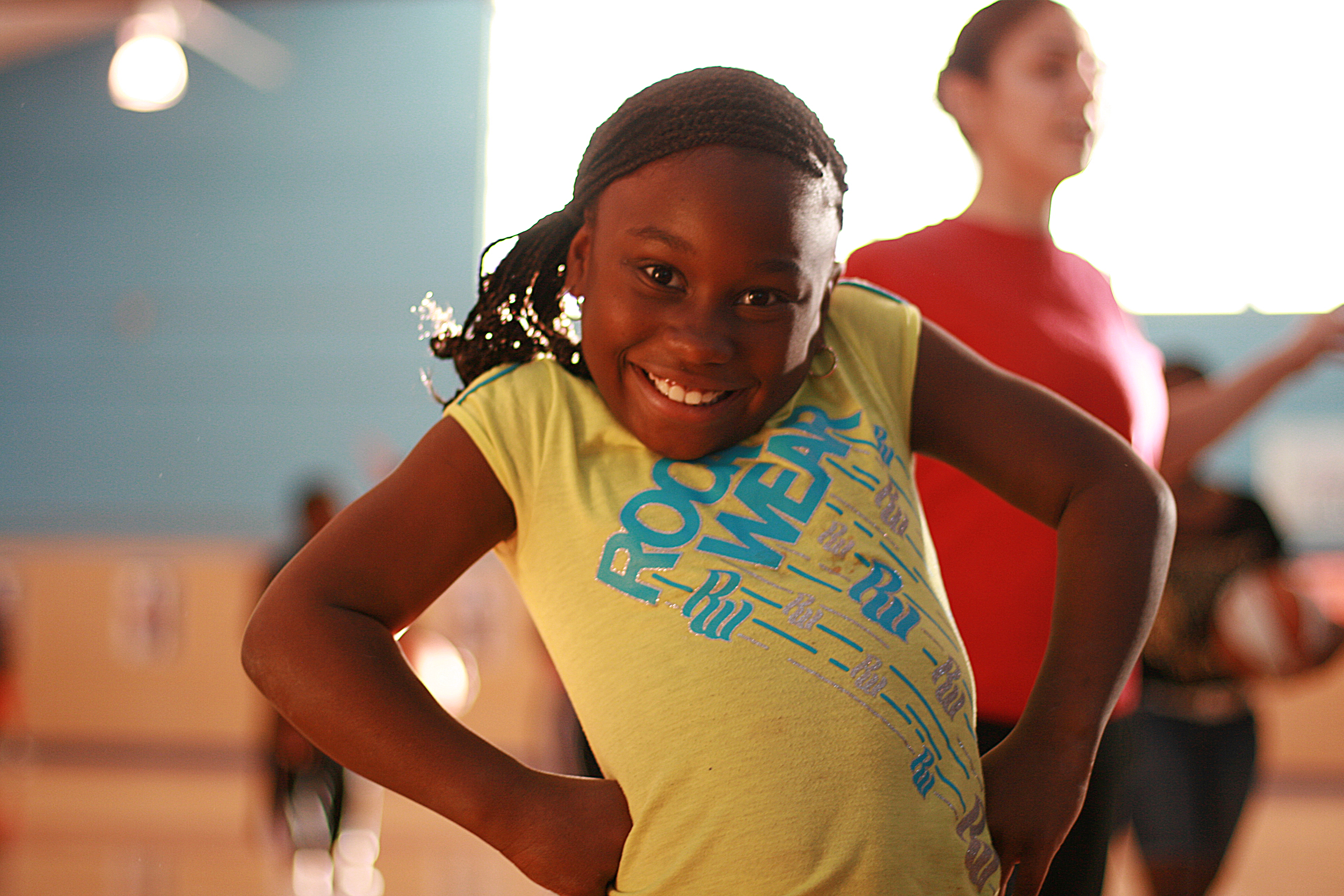 12
In-depth research conducted over a 10-year period by the Harvard Family Research Project suggests that sustained participation in well-structured programs and activities, often provided by out-of-school time nonprofits, help youth attain the knowledge and array of skills necessary for success in the 21st century. However, only 30% of school-aged children in Travis County have access to out of school programs – the most critical times of their lives. Photo by Silvana Di Ravenna

Kelly St. Julien, the East Austin Boys & Girls Club Director, said that all the funds for the Austin Duck Derby go to the Boys & Girls Club Foundation of Austin. They use funds to support programs in the clubs and to cover the large amount of expenses.

“At clubs, our biggest expense is payroll of staff and supplies. We have a lot of overhead in terms of consumables like paint, crayons, pencils, paper, basketballs, jump-ropes, and everything you can think of that kids like to play with. There are a lot of kind people in Austin who donate, but we need things on a regular basis,” St. Julien said.

At the Boys & Girls Club in East Austin, funds raised go towards drum sets, pool tables, ping pong tables, marbles, basketballs, and school supplies for classes taught by instructors. When they are not in class learning, children are able to play sports and games with other children.

11-year-old Sanoya, a member of the East Austin club, said that her favorite part of going to the Boys & Girls Club is the extracurricular activities.

“I like playing ping pong when I come to the club because it’s really fun,” Sanoya said.

Gina Hill, the Special Events Chair for the Boys and Girls Club Foundation, mentioned at the event that this was the first time the Duck Derby has benefitted the Boys and Girls Club of Austin. The Duck Derby races, which have been going on for 26 years, have been used during similar fundraisers across the nation in other cities for the Special Olympics and food banks. 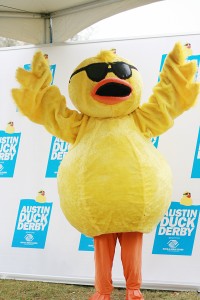 A dancing duck was at the event to groove to the music. Several attendees took pictures and danced with the duck. Photo by Silvana Di Ravenna.

“We are very excited to have raised 10,000 ducks and about $50,000 total in this effort today. This money goes into the programs that help the clubs kids. We hope that the event also helps raise awareness for the Boys and Girls Club of Austin,” she said.

The event was sponsored by more than 35 local national and local business, which provided prizes for the race. Sponsors included Amy’s Ice Cream, Whole Foods and the Austin Fire Department.

Participants had the opportunity to “adopt” a racing rubber duck for $5 dollars with the chance of winning anything from a round of golf at Palmer Lakeside Golf Course to a 2014 Volkswagen Jetta.

Andrew Garvin, who used to attend the Boys and Girls Club during his youth and currently does PR and Consulting on his own, became this year’s official promoter and face of The Austin Duck Derby.

He decided to participate in the race when Gina Hill herself invited him to join in at a different event. He said that the experience was the perfect opportunity to give back to an organization that did so much for him. 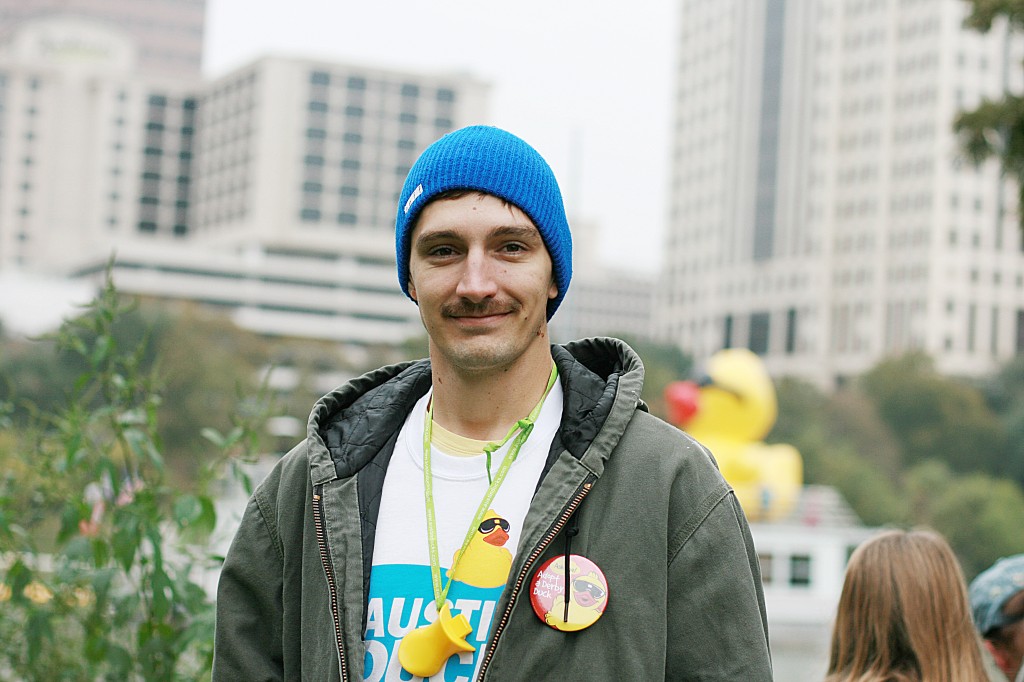 Andrew Garvin, the official promoter and face of the Austin Duck Derby, stands near the duck race and takes observations of the event’s success. Garvin used to attend the Boys & Girls Club during his youth and hopes to give back as much as possible to the organization in order to help other children who are in similar situations that he faced growing up. Photo by Silvana Di Ravenna.

“If it wasn’t for the Boys and Girls Club I wouldn’t be where I am today. I lived in a low-income house and we didn’t have a basketball court or gym equipment, computers, assistance nor tutoring. The club gave us a place to be and it was a good social setting for kids that didn’t have that opportunity outside of class or outside school,” Garvin said.

According to St. Julien, the Austin Duck Derby is a way to get the entire community involved while informing them of what the club does. It is also a fun event that is easy to take part in.

“We really wanted to make our fundraising more accessible to everyone. Only so many people can attend our Boys and Girls Club spring luncheon, our fall gala, and our golf tournament. The duck derby serves a dual purpose of getting the word out about who we are to people who might not know us while allowing people to support us, and culminate that in a fun way,” St. Julien added. 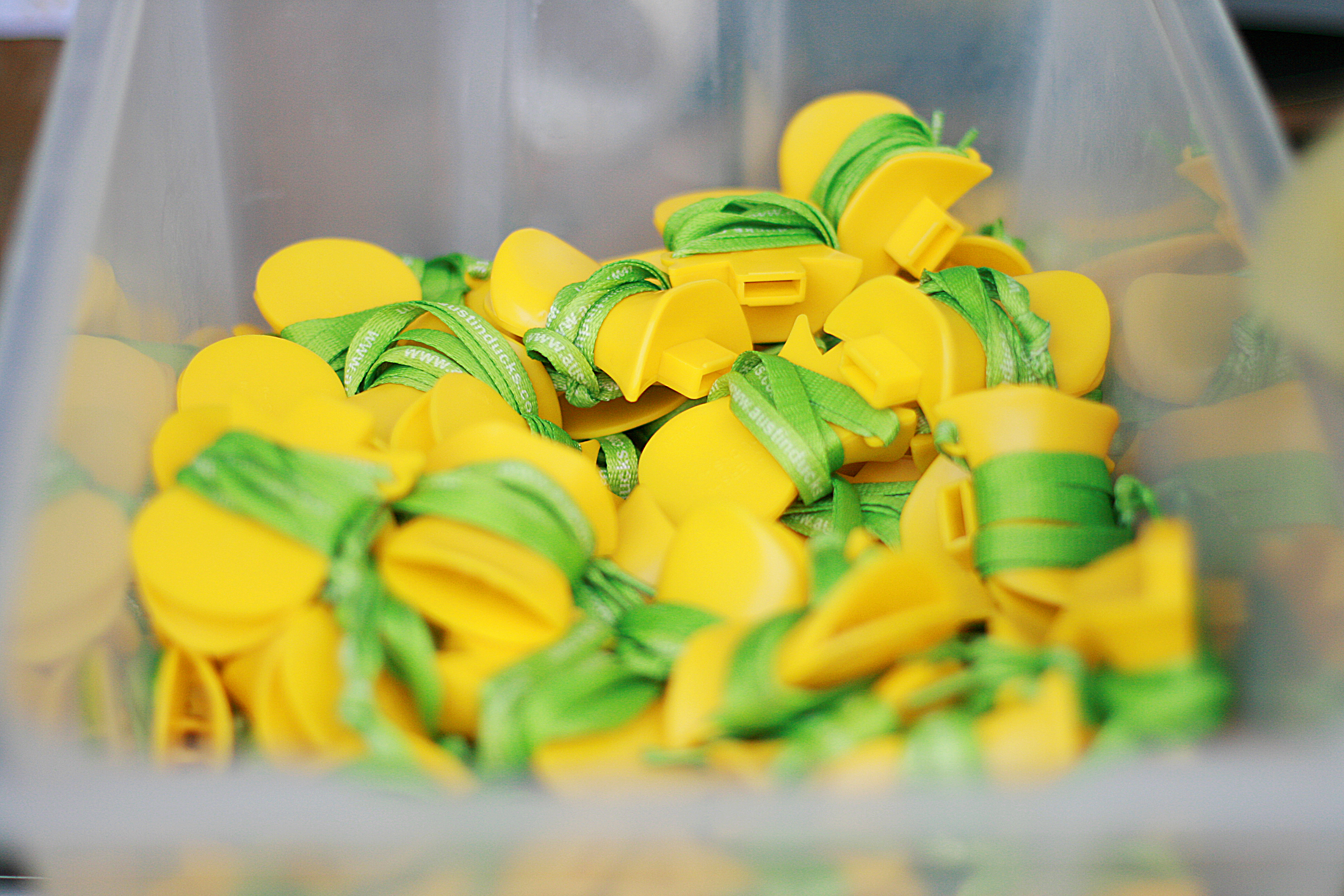 Duck bills were available to get the attendees in the “quacky” spirit. The quacks were used to countdown the launch of the ducks. Photo by Silvana Di Ravenna. 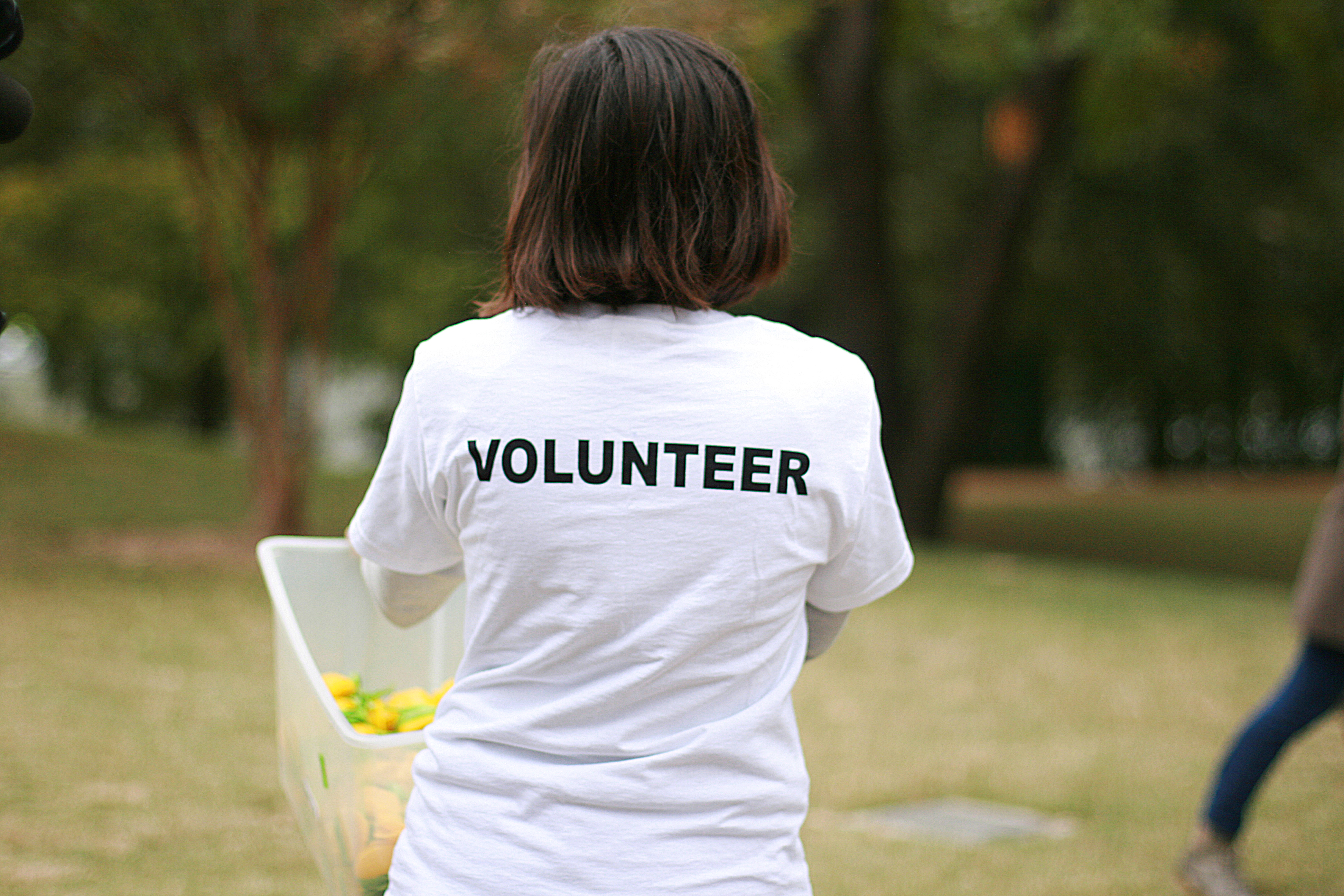 Lindsay Wolf, a volunteer, handed out duck bills to the attendees, making sure everyone was prepared for the ducks to be launched. Photo by Silvana DI Ravenna. 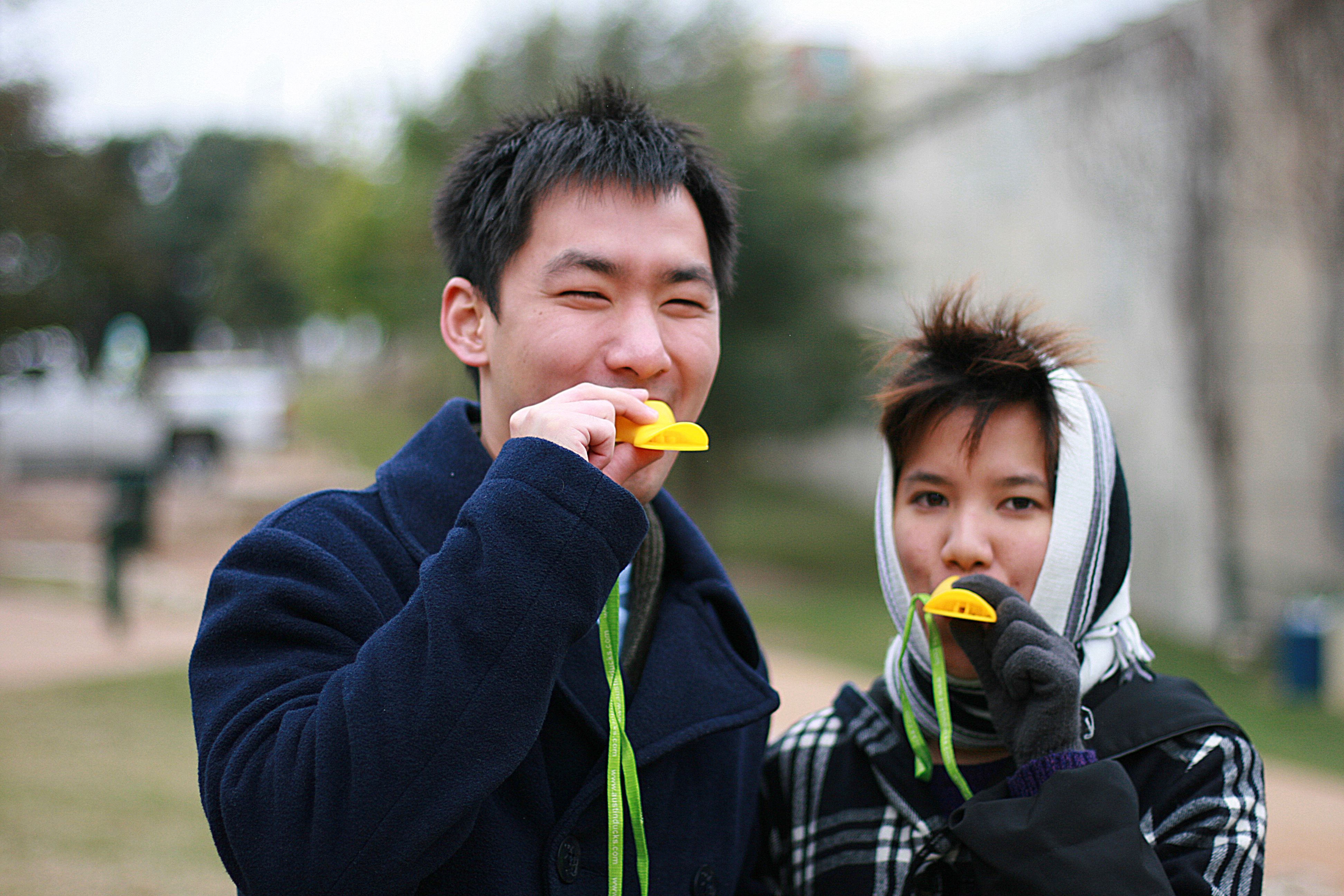 “A couple that quacks together, stays together!” Everyone was in the duck spirit while they waited to see if their ducks won the race. Photo by Silvana Di Ravenna. 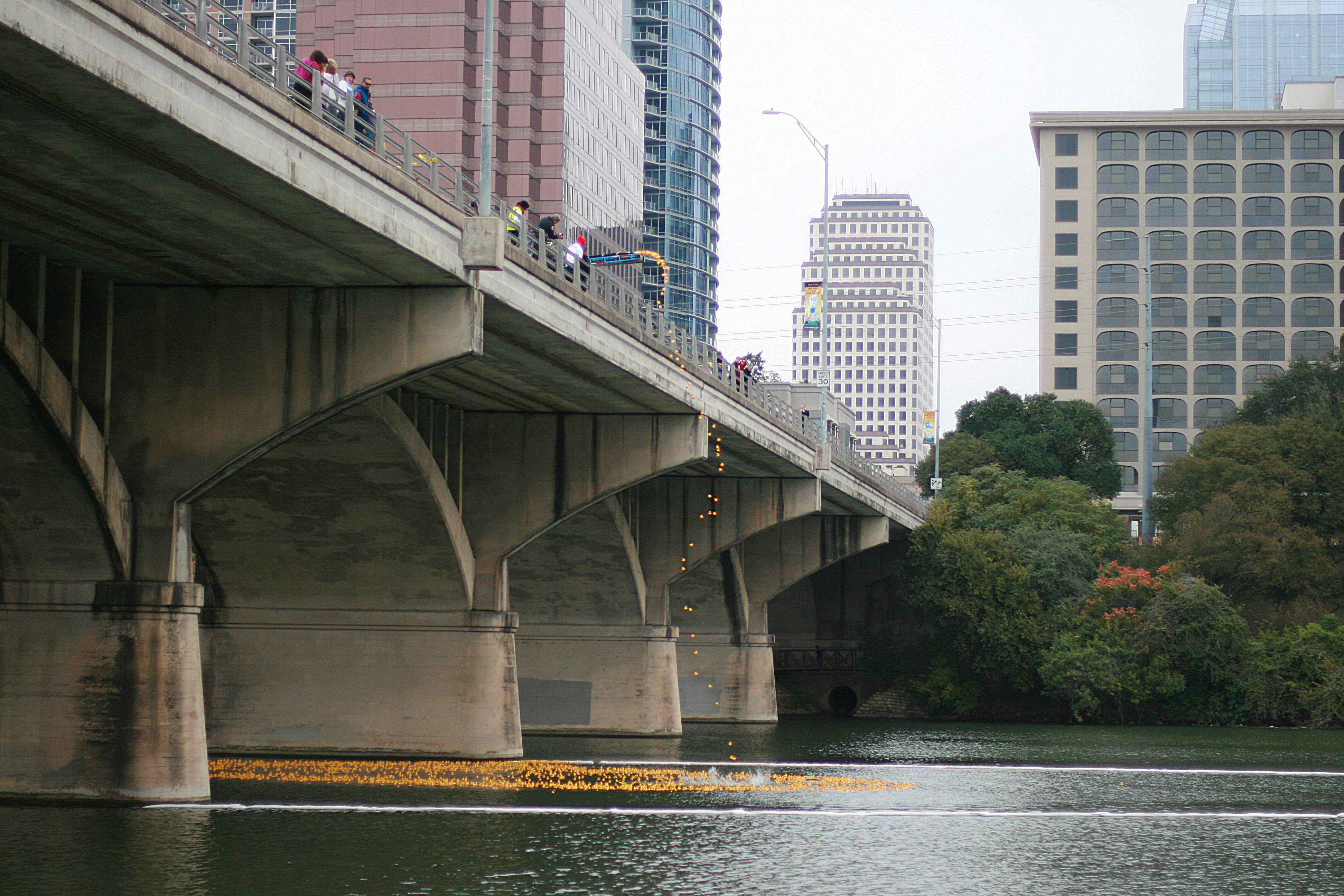 The Lady Bird Lake was the site for the duck race. The ducks were launched from the bridge by the hundreds as attendees watched from the embankment. Photo by Silvana Di Ravenna. 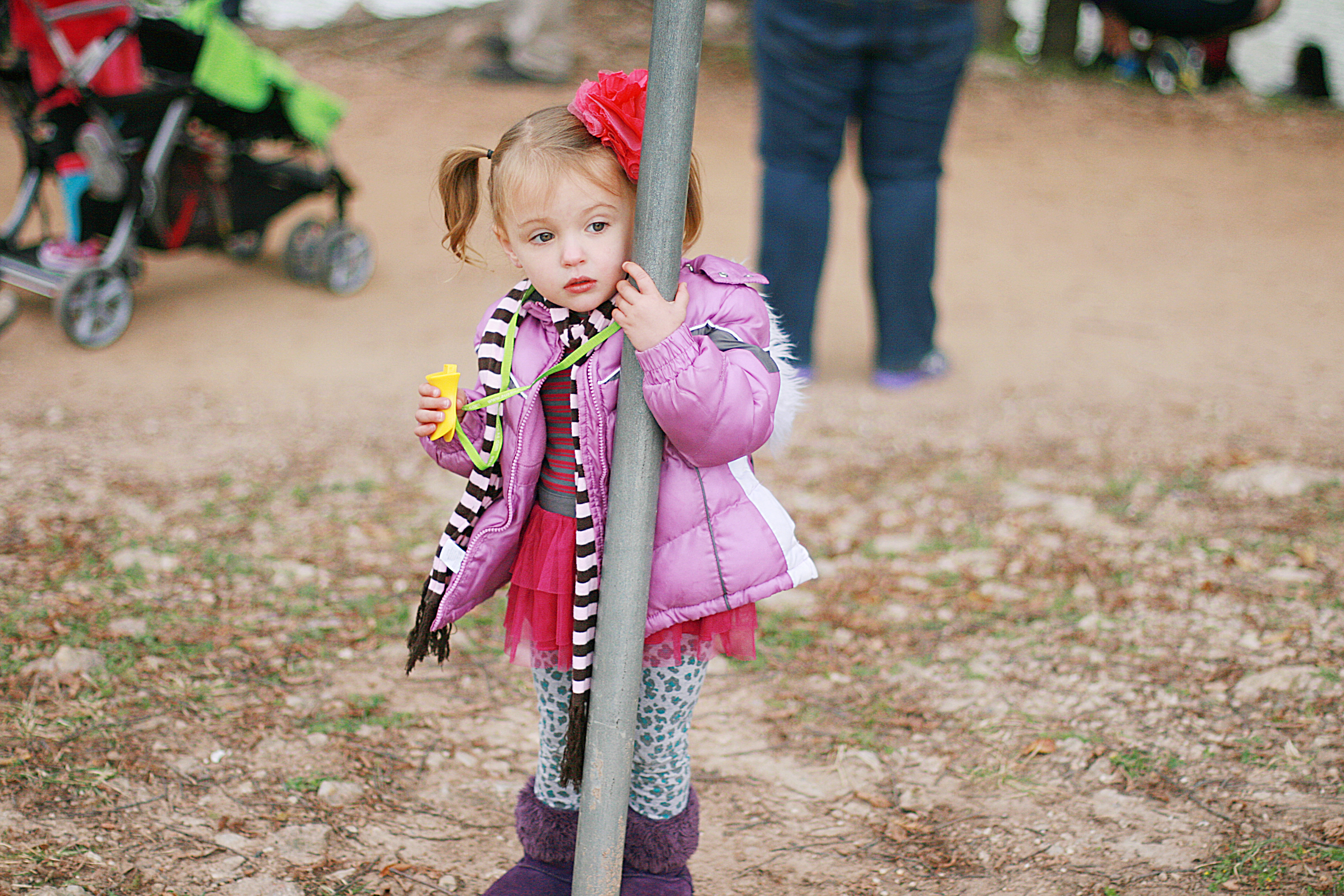 Kids of all ages came to see the rubber duckies race. There were several events available for the kids to enjoy such as face painting. Photo by Silvana Di Ravenna. 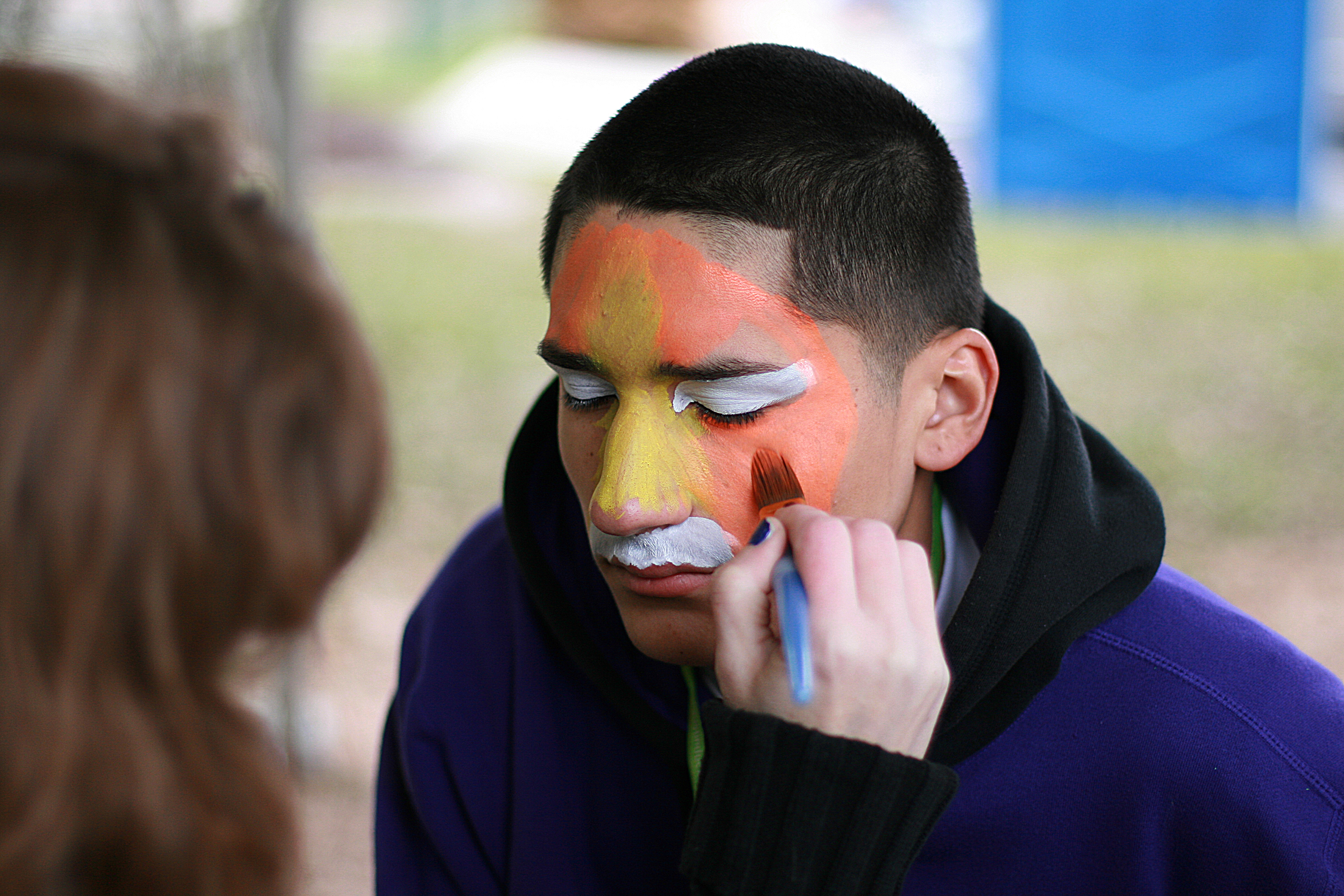 A face painting artist creates unique facial designs free of cost to anyone who is at the Austin Duck Derby. Several attendees choose to have their faces painted with ducks in honor of the 10,000 rubber ducks launched for the derby race. Photo by Silvana Di Ravenna. 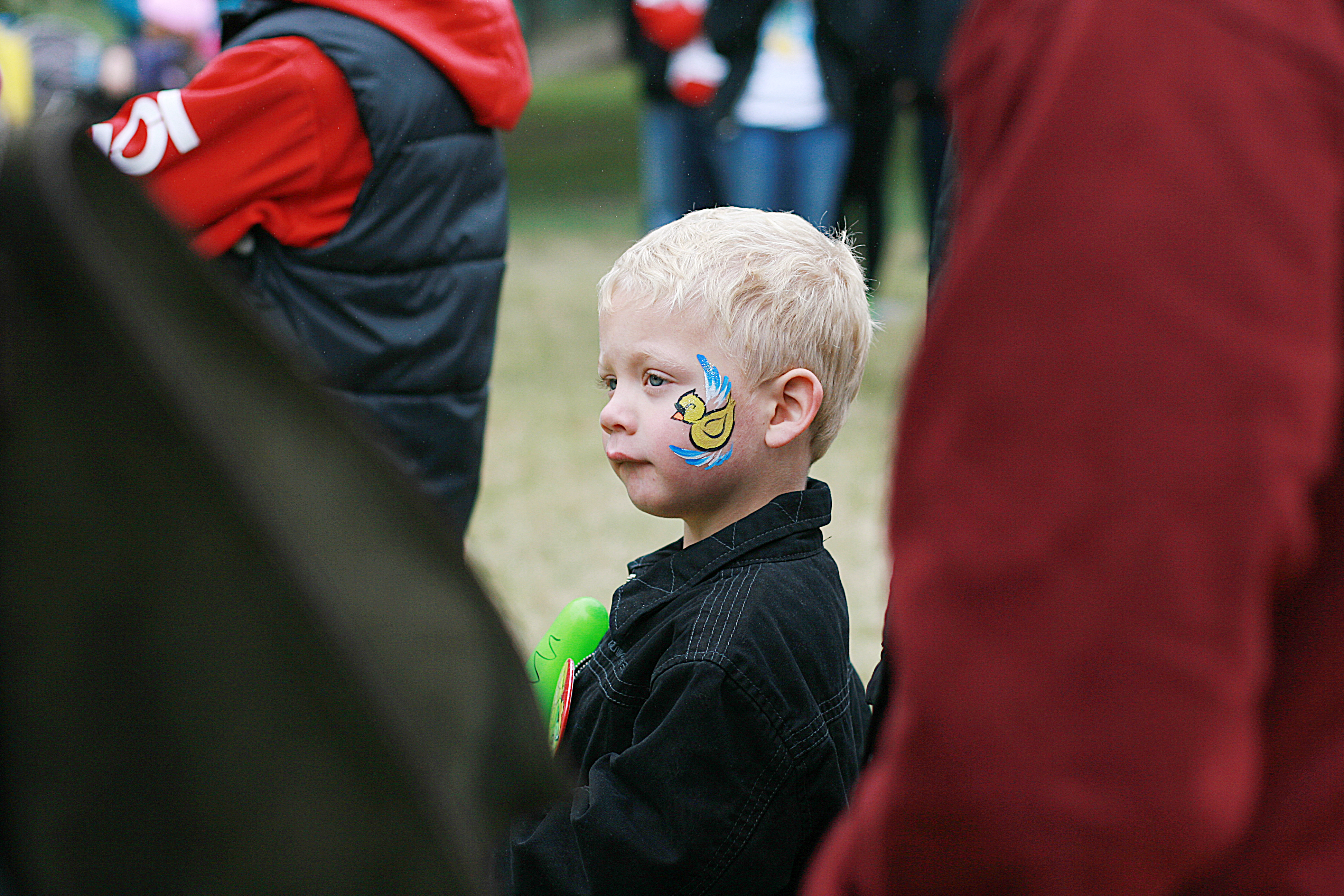 A young boy at the Austin Duck Derby stands by his mother, sporting a duck painted on his cheek, while watching the DJ play some tunes. Many others surround the stage, listening to upbeat music at the event while waiting for the winners to be announced. Photo by Silvana Di Ravenna. 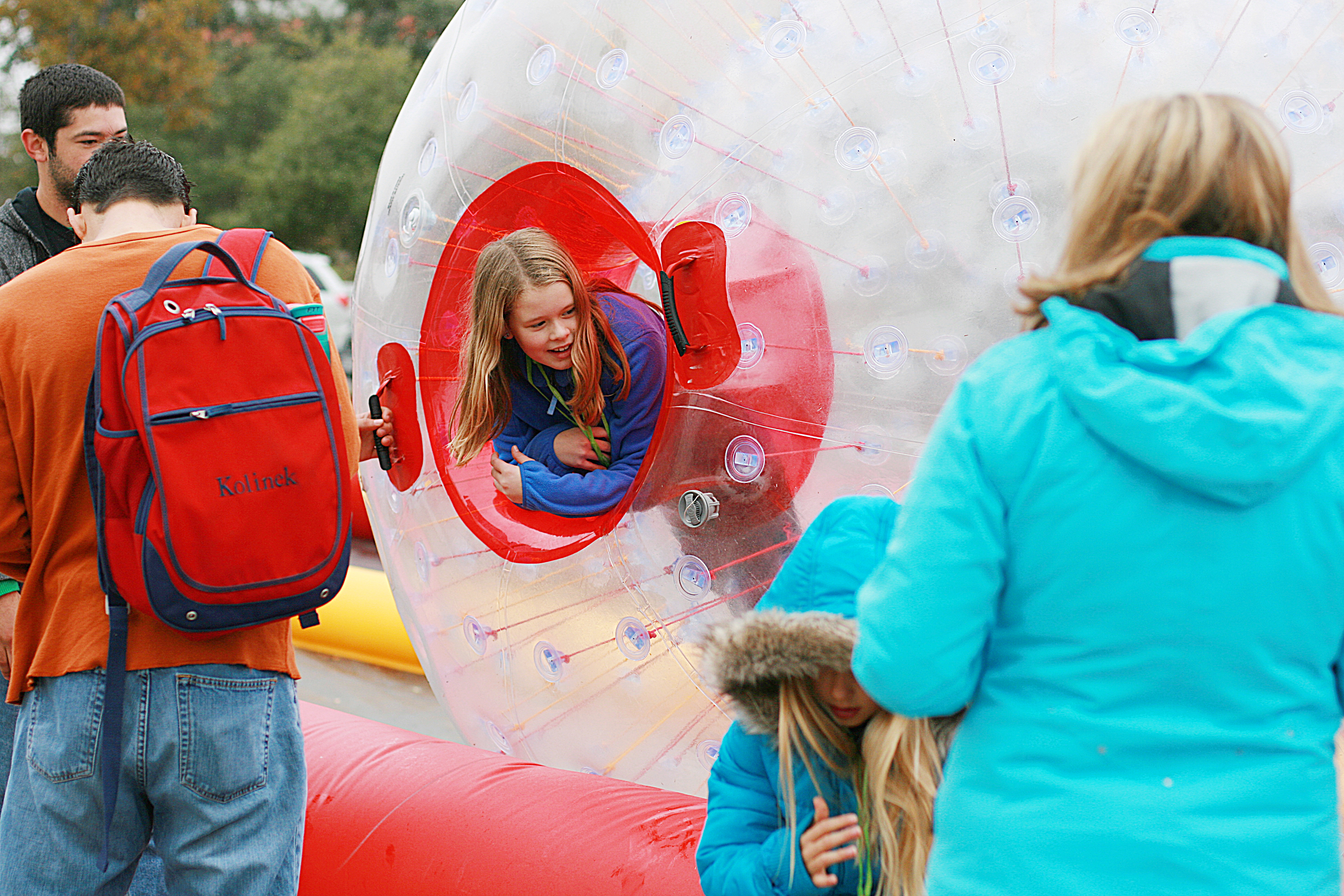 Children run and roll around individually in inflatable “human hamster balls” on a track. Two separate track lanes allow children to race back and forth as many times as they choose while parents stand by and watch. Photo by Silvana Di Ravenna. 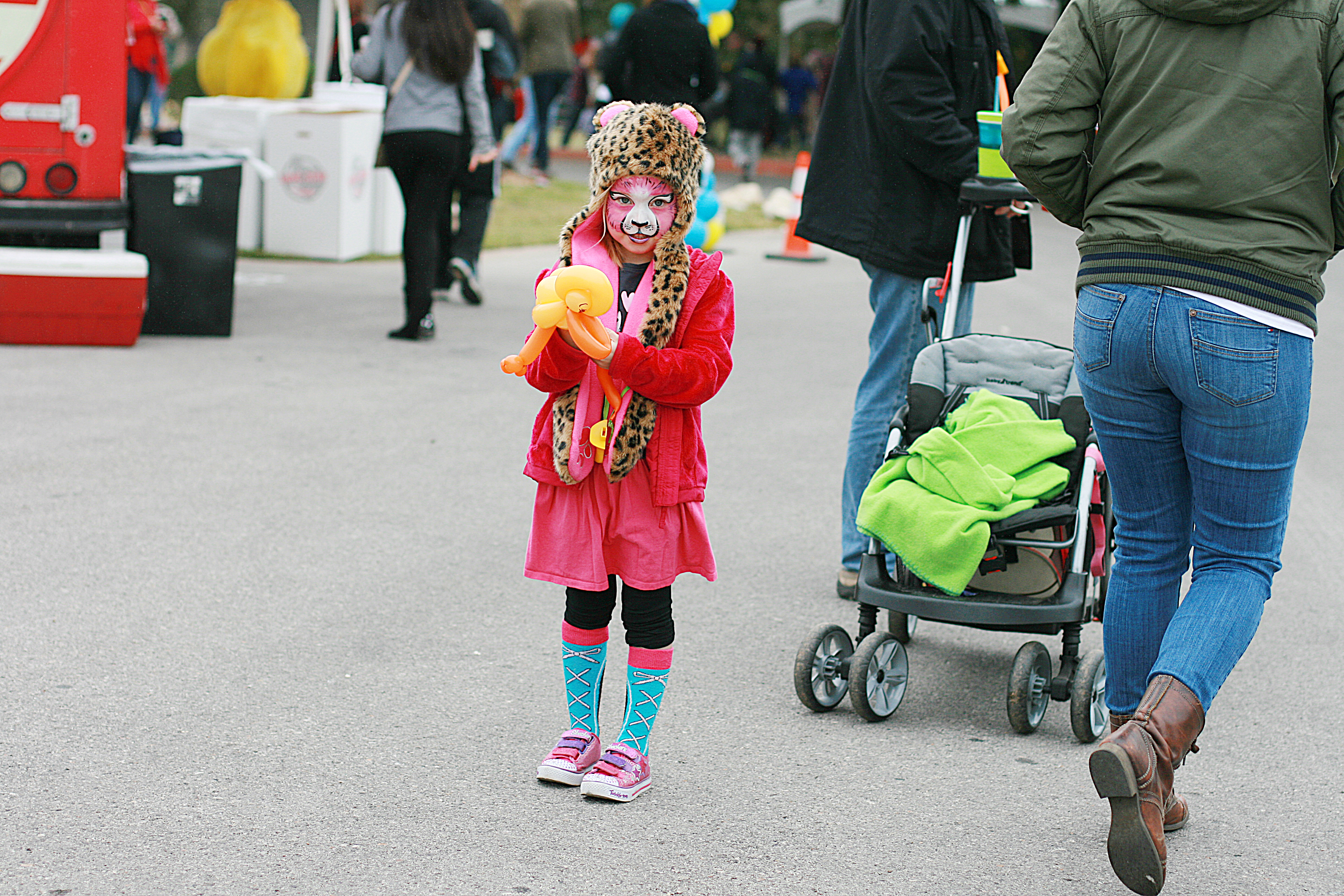 A young girl stands with a balloon animal shaped into a duck. A balloon artist at the Austin Duck Derby creates balloon animals and other figurines free of charge to anyone interested in having one. Photo by Silvana Di Ravenna 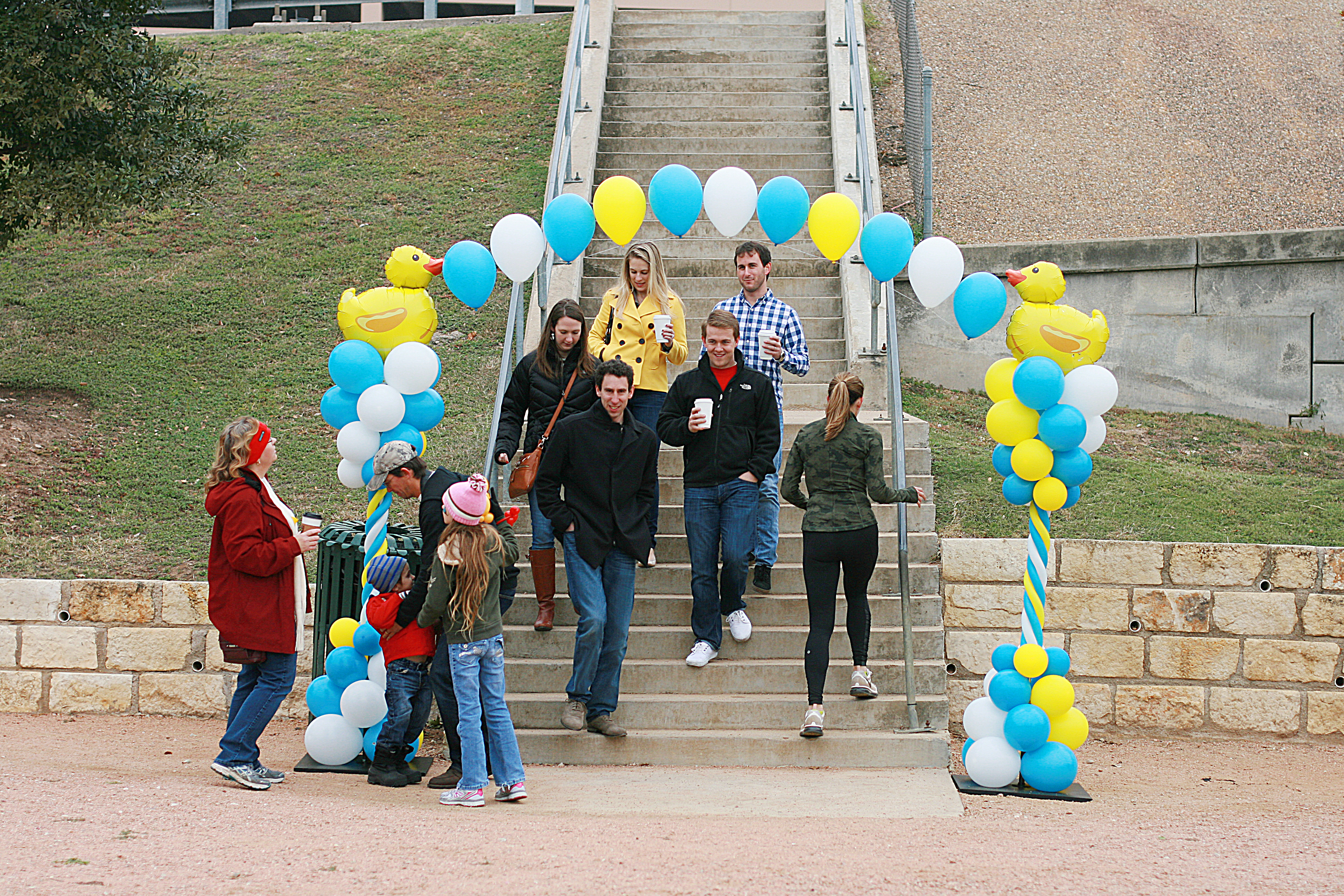 Several attendees walk down the stairs near the Austin American Statesman parking lot to enter the event. The parking lot is the primary location for several food trucks, including a booth featuring Amy’s Ice Cream, and a photo tent for people to take photographs and dance with the duck mascot. Photo by Silvana Di Ravenna