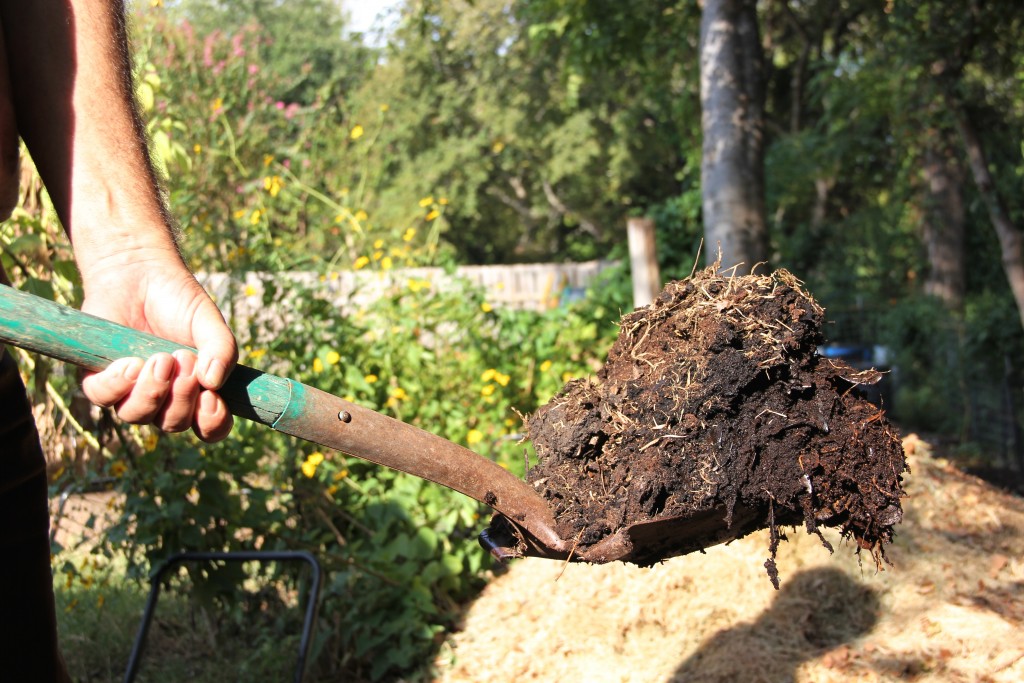 Khalil Elharam uses a shovel to turn his compost. Turning the compost introduces oxygen and speeds up production. “I produce enough compost for my entire yard,” he says. Photo by Erin MacInerney

Do you recycle? If not, you might want to pay attention to Austin’s new regulations regarding food diversion and waste recovery.

Or black. Or gray. Or whatever color pollution can be deemed.

Or it could be known as the capital of a state ranking dead last for overall environmental quality.

According to the Natural Resources Defense Council, the carbon boot prints Texas is leaving makes it the least green state overall. Yet Austin, ranks among the top ten sustainable cities in America

This month, the city entered the third phase in a five-year recycling and organics diversion program. The Universal Recycling Ordinance is part of the city’s goal of having Zero Waste by 2040, or keeping at least 90 percent of discarded materials out of landfills. 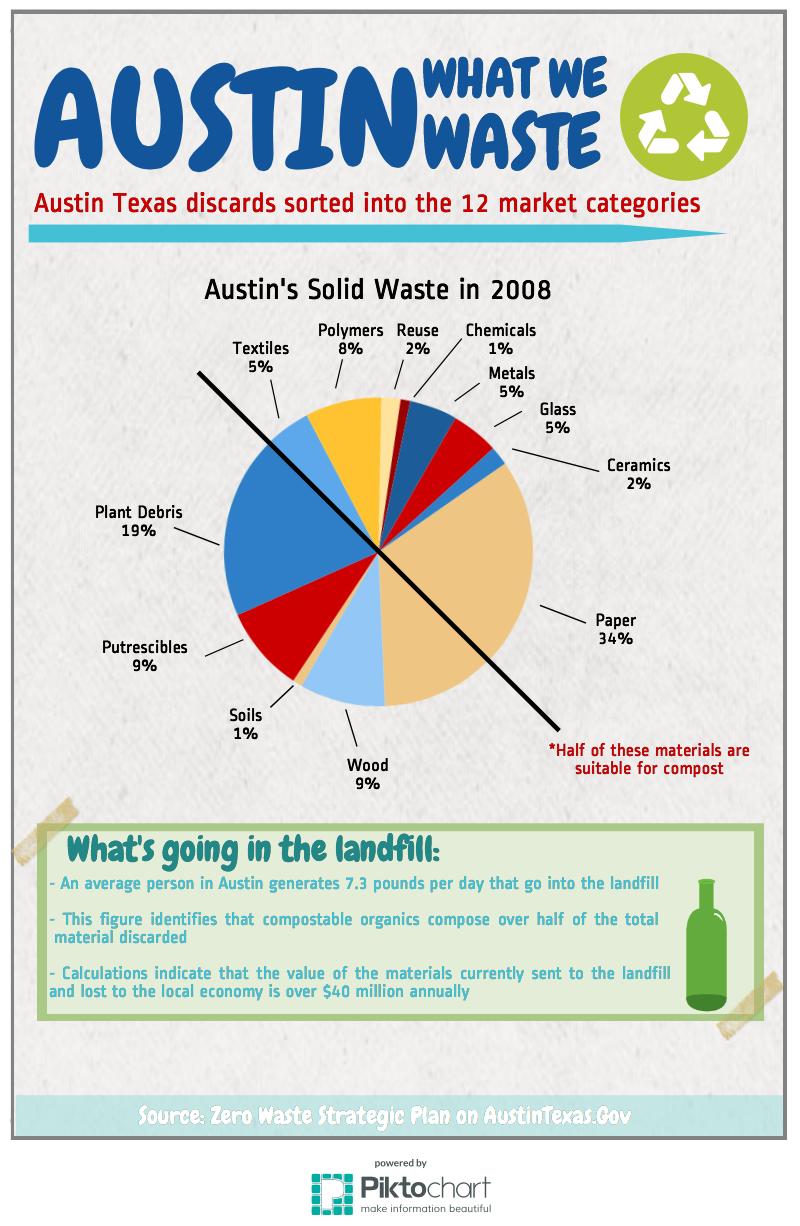 By 2017, all properties will be required to provide access to recycling for tenants and employees and by 2018, all food enterprises must have a food diversion program in place.

Despite Austin’s ranking, there is still progress to be made in waste reduction to meet these goals, according to the Austin Resource Recovery Center’s Waste Characterization Study.

Some initiatives, like the plastic bag ban meant to decrease the amount of grocery store bags in landfills, have not had the intended outcomes.  Reusable bags designed to be used up to 100 times or more are being thrown out after a few uses.

So how can Austin businesses and individuals meet the new requirements?

Barr Mansion, the nation’s only certified organic event facility, is a prime example of a business with a working diversion plan already in place.

“Brides and grooms book us because of our practices,” says Caroline Hunt, Sales Manager for Barr Mansion. “We do the grunt work and they get the good feeling that their wedding was sustainable and didn’t hurt the environment.”

Hunt believes that being considered an ethical company adds more depth to their brand which ultimately increases business.

One way the venue manages waste is by not providing trash cans on the grounds. Guests are encouraged to leave their trash on tables so that a staff member can properly deposit it into the correct bin. This saves visitors from the guesswork of figuring out what bin their waste should go in and saves the staff from having to sort through the trash after events.

“We are very serious about how we throw things away,” Hunt says. “It is a process, so it is something you have to sit down and discuss but setting up and researching how compost’s work is not that hard.”

Hunt says some businesses may be weary of the costs associated with implementing a new recycling plan but their company has actually saved money with their practices.

“We have the same amount of staff as most venues,” Hunt says. “We don’t have to pay the staff more, just instilling in them that it is important, so more training for the staff.”

Businesses will financially benefit from composting with a reduction in trash and associated fees according to Compost Coalition of Austin. The grass-roots network of volunteers is helping individuals and businesses connect to the resources they need to divert organic materials from landfills.

“In Austin, we have at least three different commercial compost contractors and are likely to see more which should help to keep pricing competitive,” says Heather-Nicole Hoffman, leader of Compost Coalition. “We also hope to see more and more decentralized composting efforts which will include on-site composting for some businesses and volunteer collective composting efforts such as the
Compost Coalition program Ground to Ground or the Austin Materials Marketplace.” 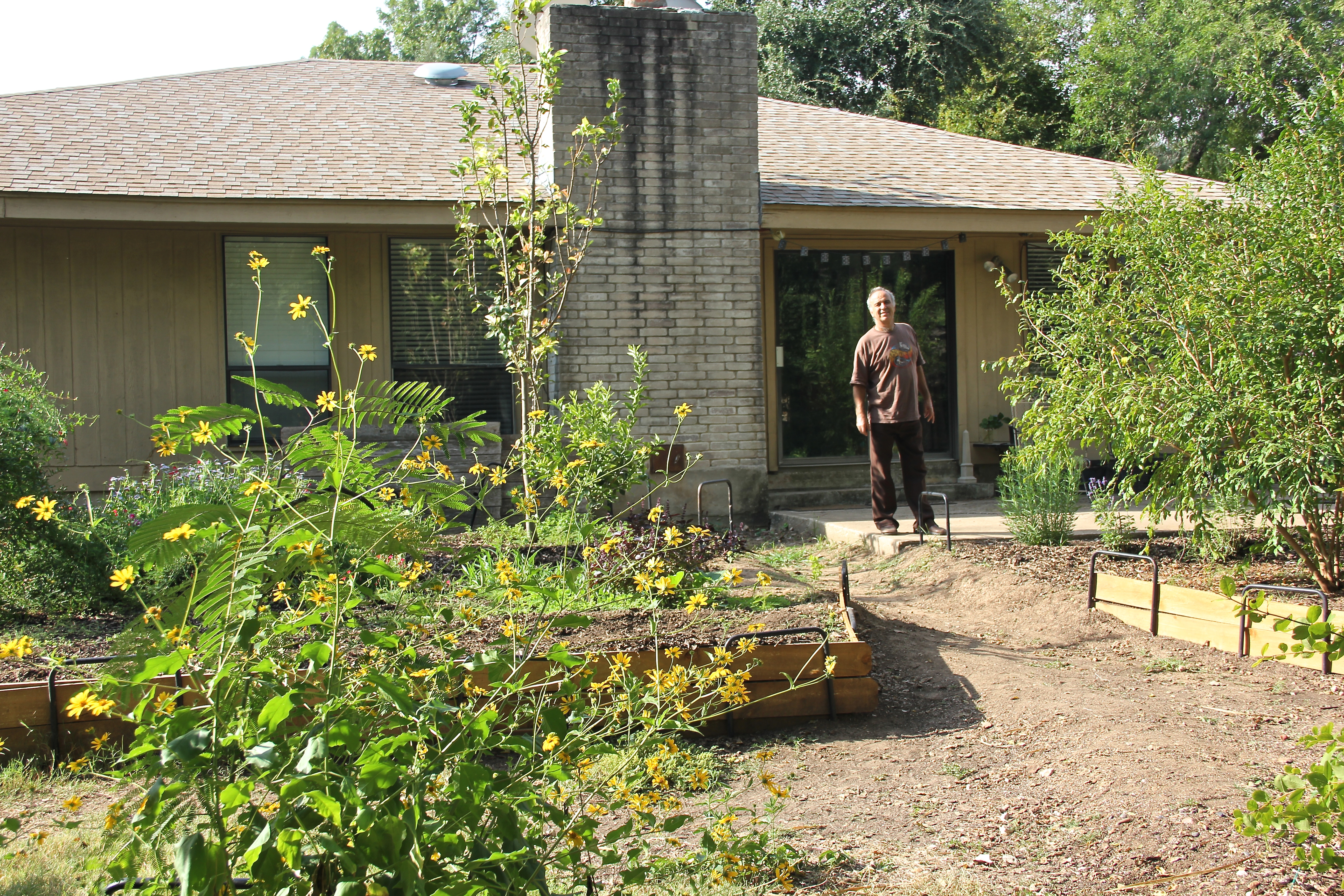 Khalil Elharam stands in his garden. Khalil and his wife Jean plant a variety of vegetables and herbs that can withstand all four seasons. Photo by: Erin MacInerney 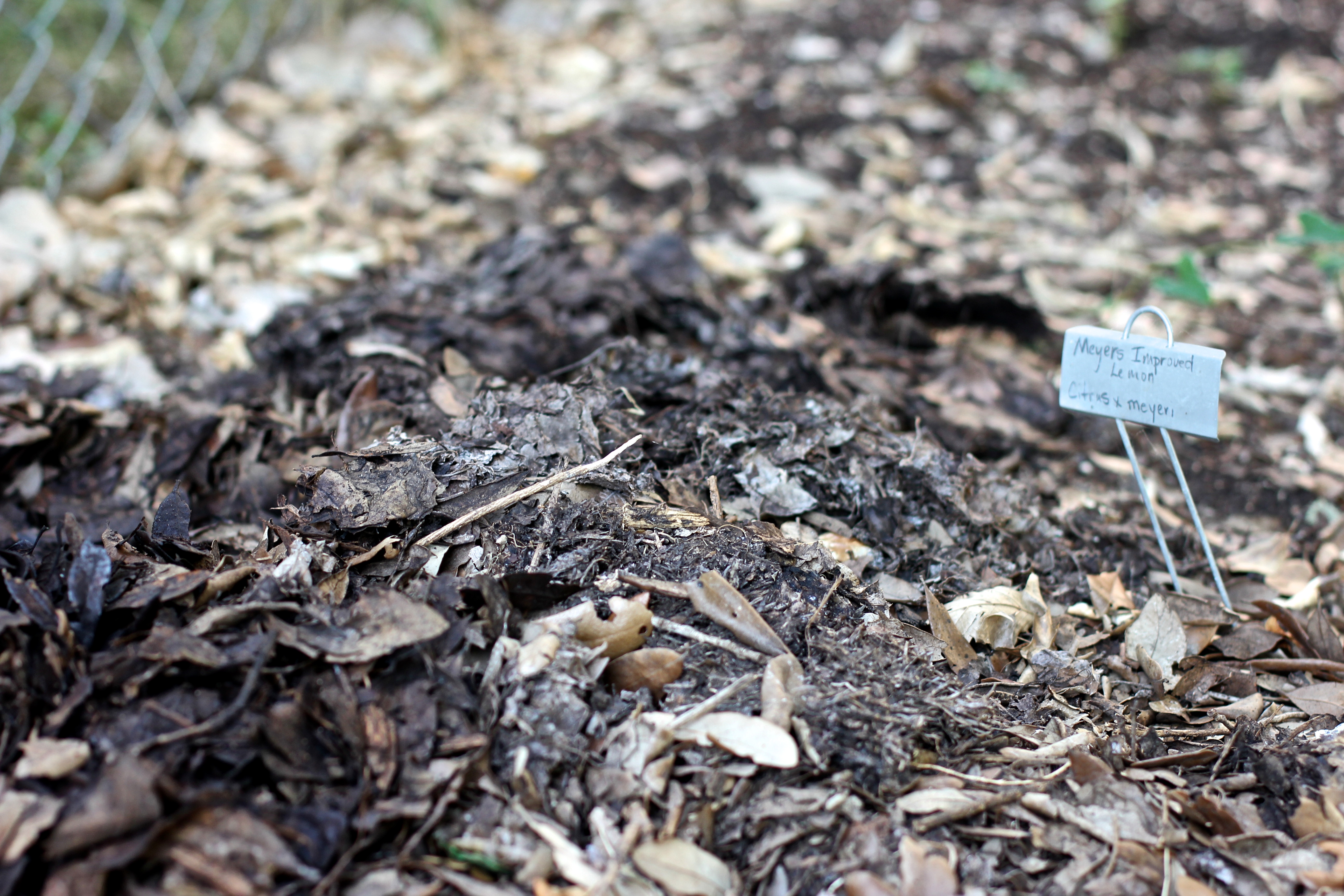 Elharam uses homemade compost to fertilize his lemon tree. "This is the fourth season for this tree to produce lemons, I'm very proud," he says. Photo by: Morgan Bridges 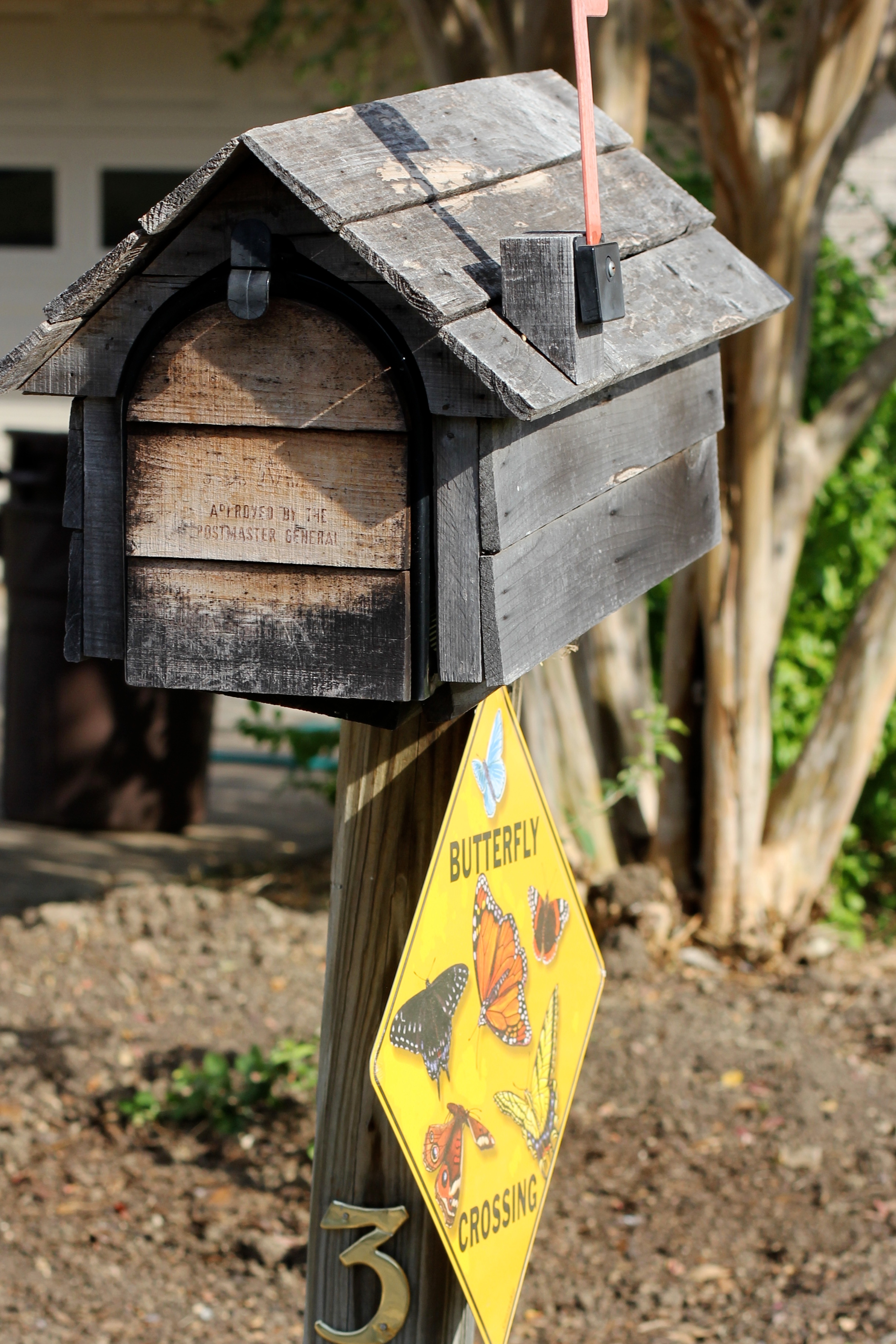 Elharam's mailbox is decorated with a "Butterfly Crossing" sign. His garden is frequented by a variety of the colorful winged insects. Photo by: Morgan Bridges 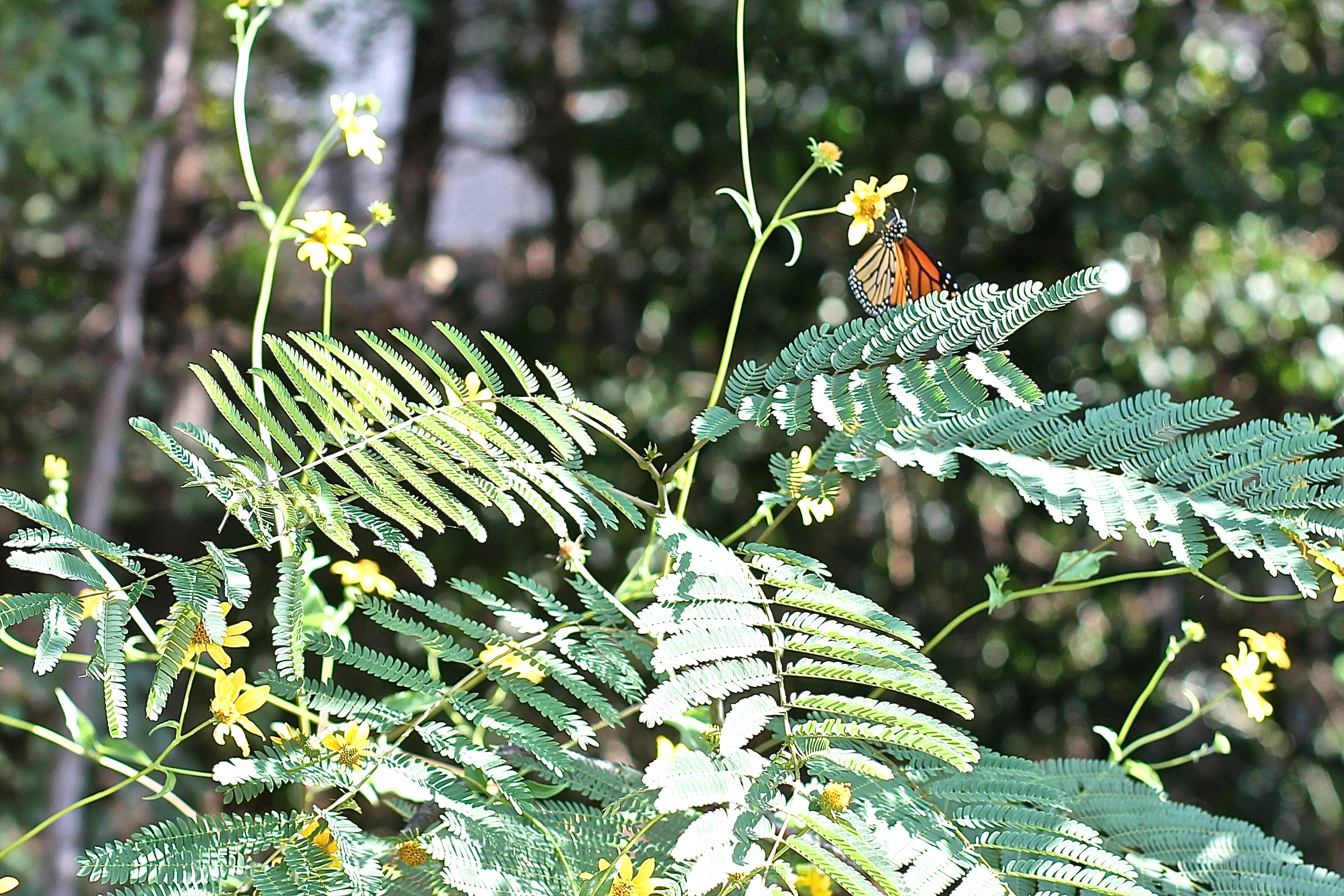 Elharam loves to plant flowers for himself and his neighbors. He welcomes his butterfly visitors and even hangs bananas for their consumption. Photo by: Morgan Bridges 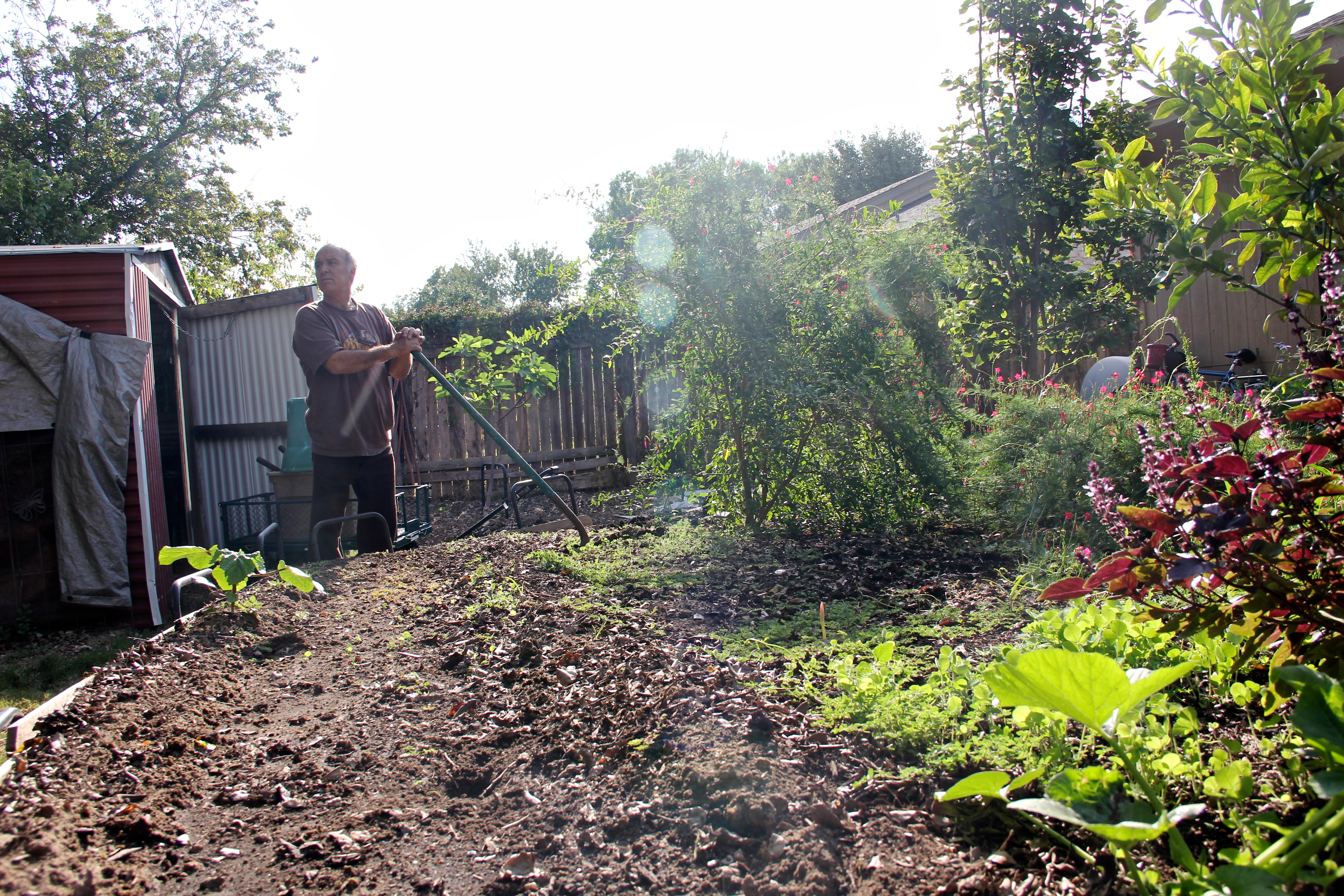 Elharam checks the mint leaves in his garden. "I love drinking mint tea every morning," he says. "I am the cook of the house, call me Mr. Mom." Photo by: Erin MacInerney 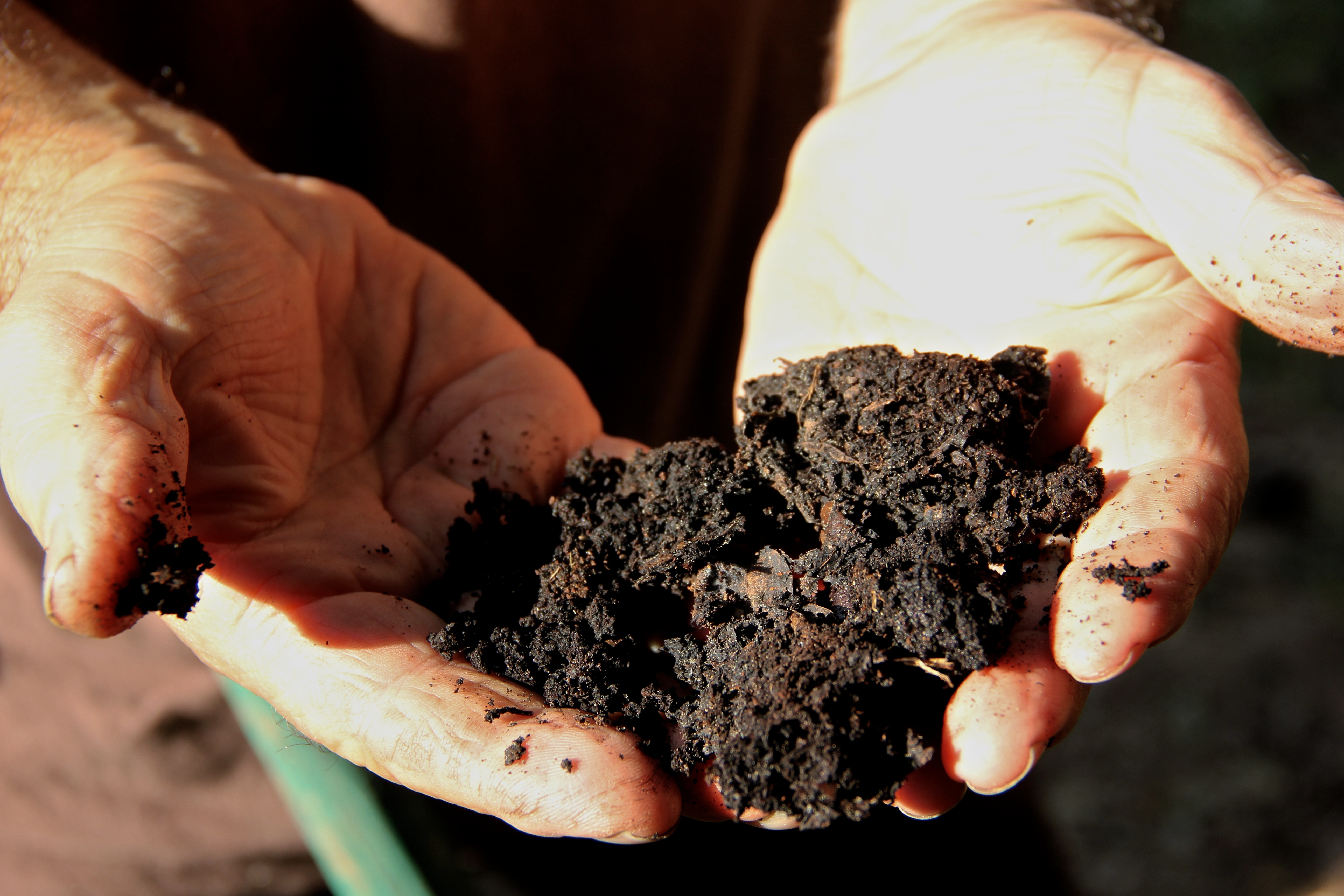 Khalil Elharam demonstrating the content of his homemade compost. He points out that adding worms to the mixture helps make the compost more nutritious for his plants. Photo by: Erin MacInerney 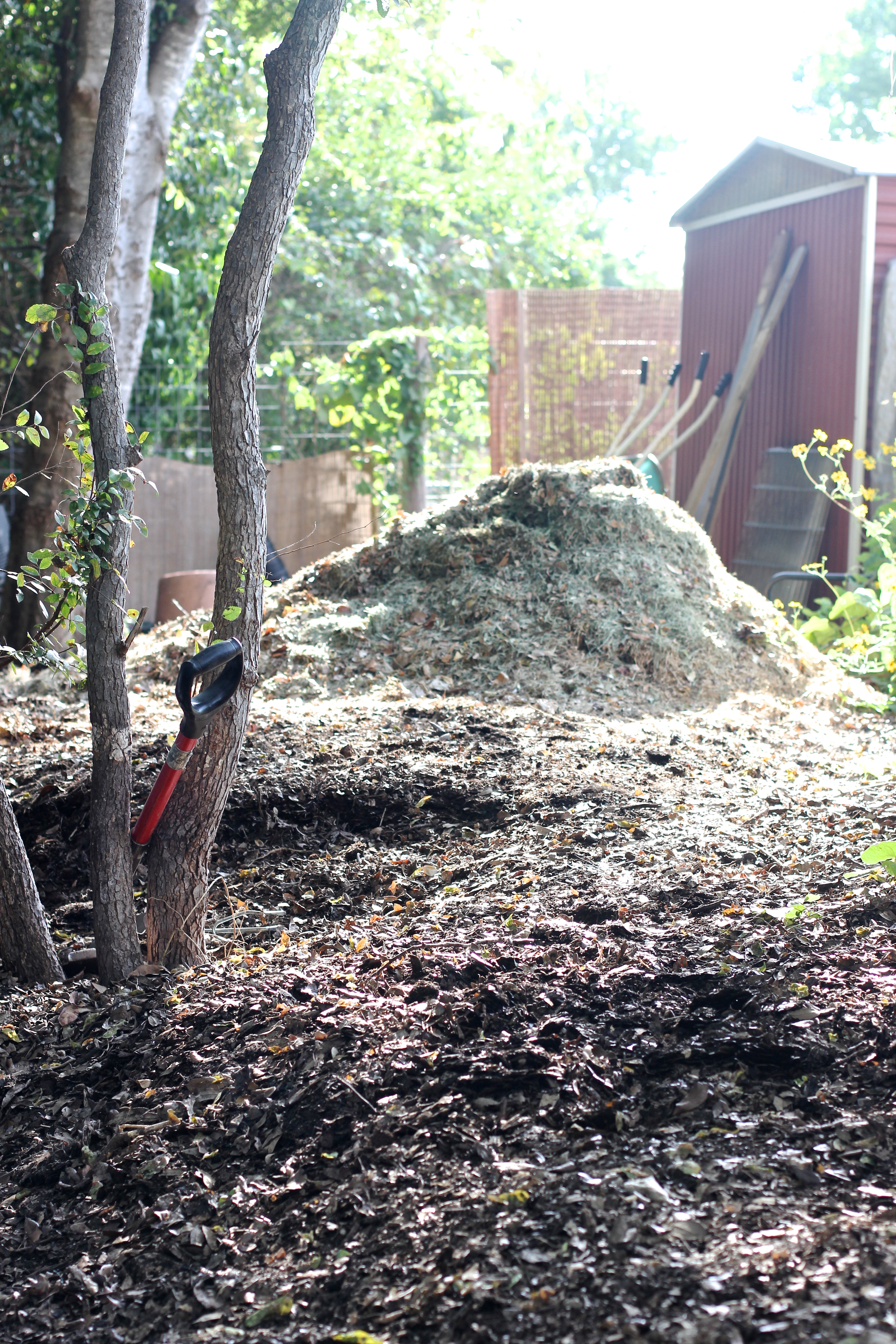 "I make my compost out of lawnmower clippings and coffee grinds from Starbucks. The local Starbucks store has buckets of coffee grinds that they give away for free," says Elharam. Photo by: Erin MacInerney 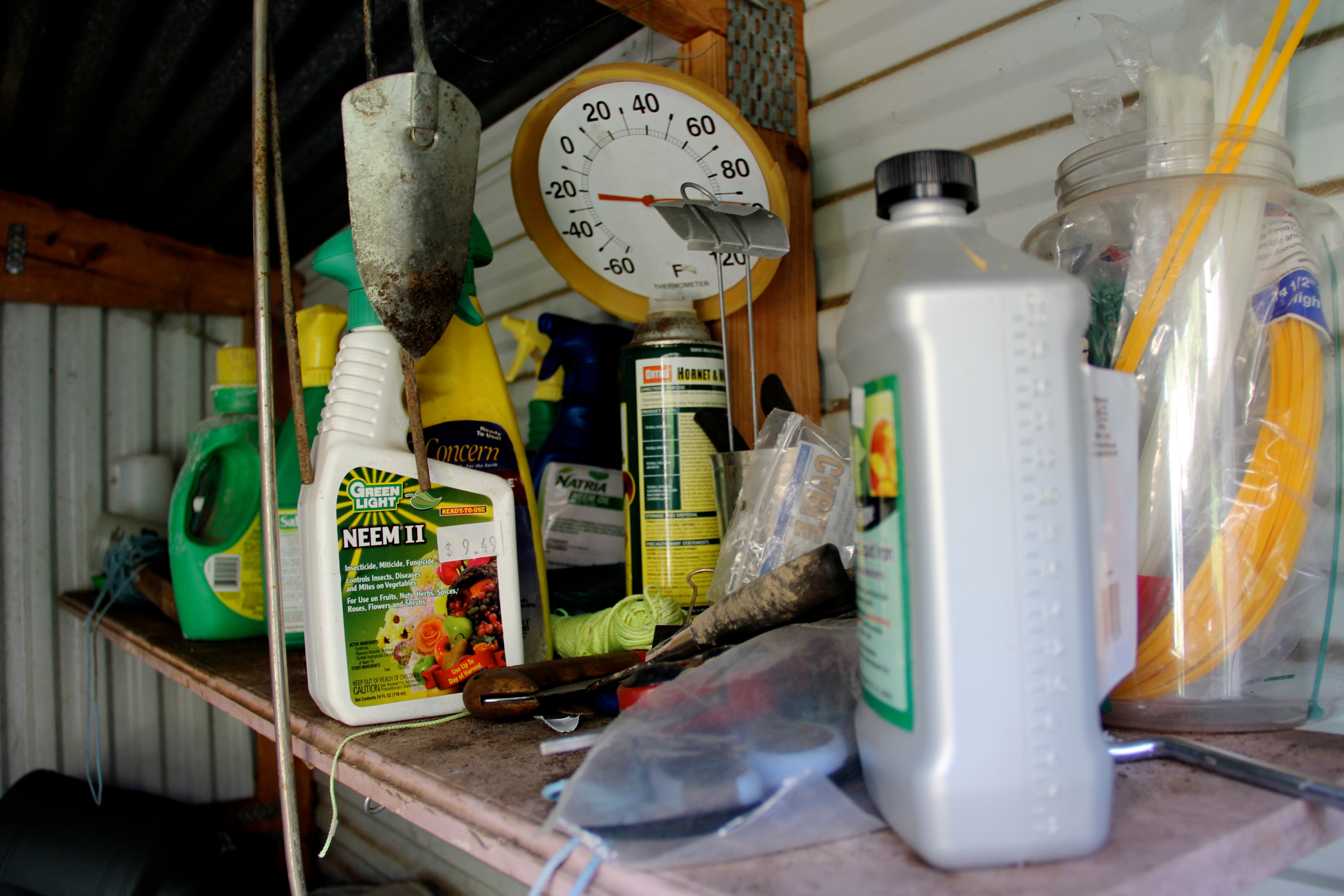 "This is my small and organized shed," reveals Elharam. "It has everything I need to tend to my garden." Elharam points out that he makes an effort to reuse or repurpose all the bottles and containers that he uses for gardening. Photo by: Erin MacInerney 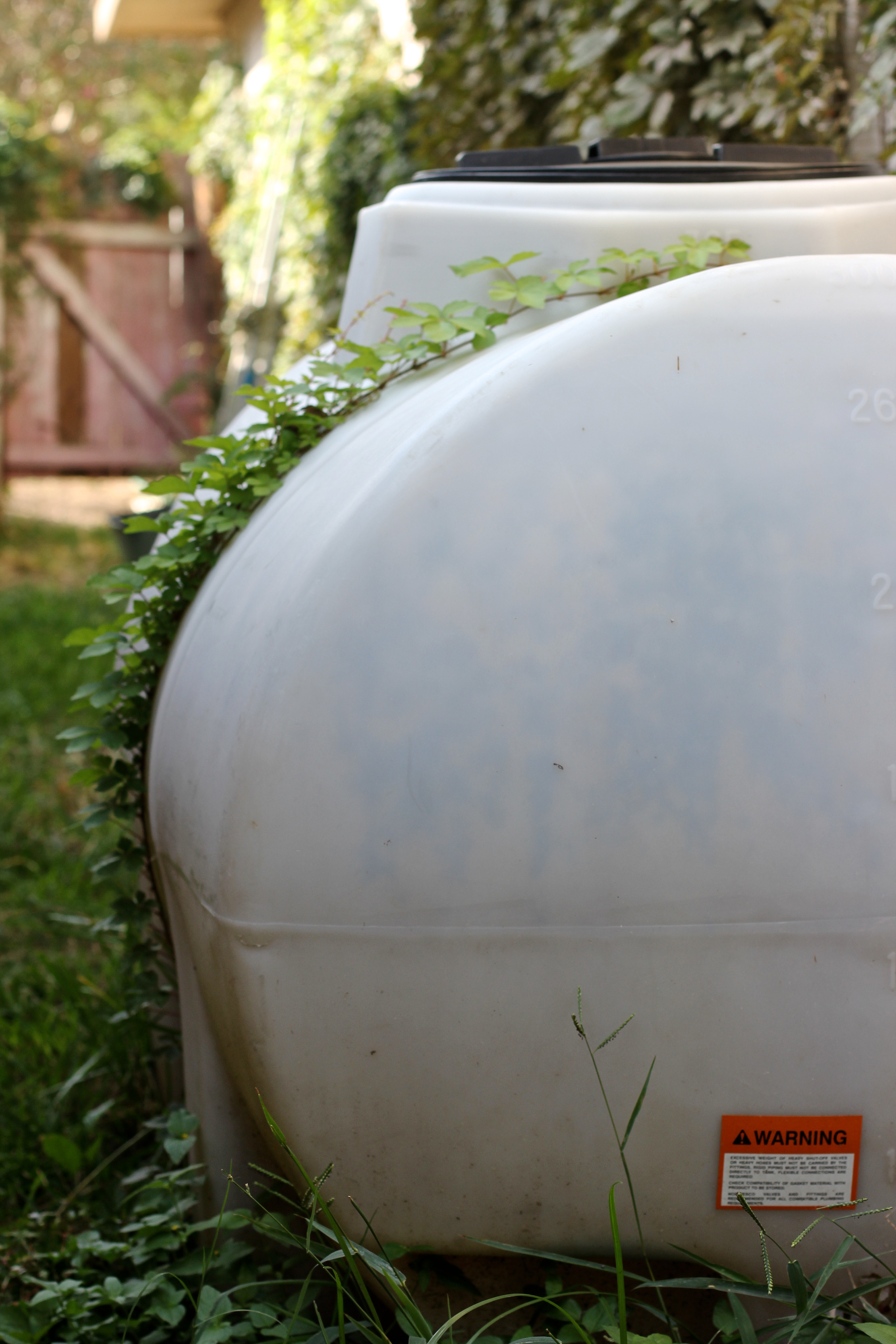 "We don't use water from the City of Austin on our garden. My wife and I collect rainwater and water from the creek in large barrels," said Elharam. Photo by: Morgan Bridges 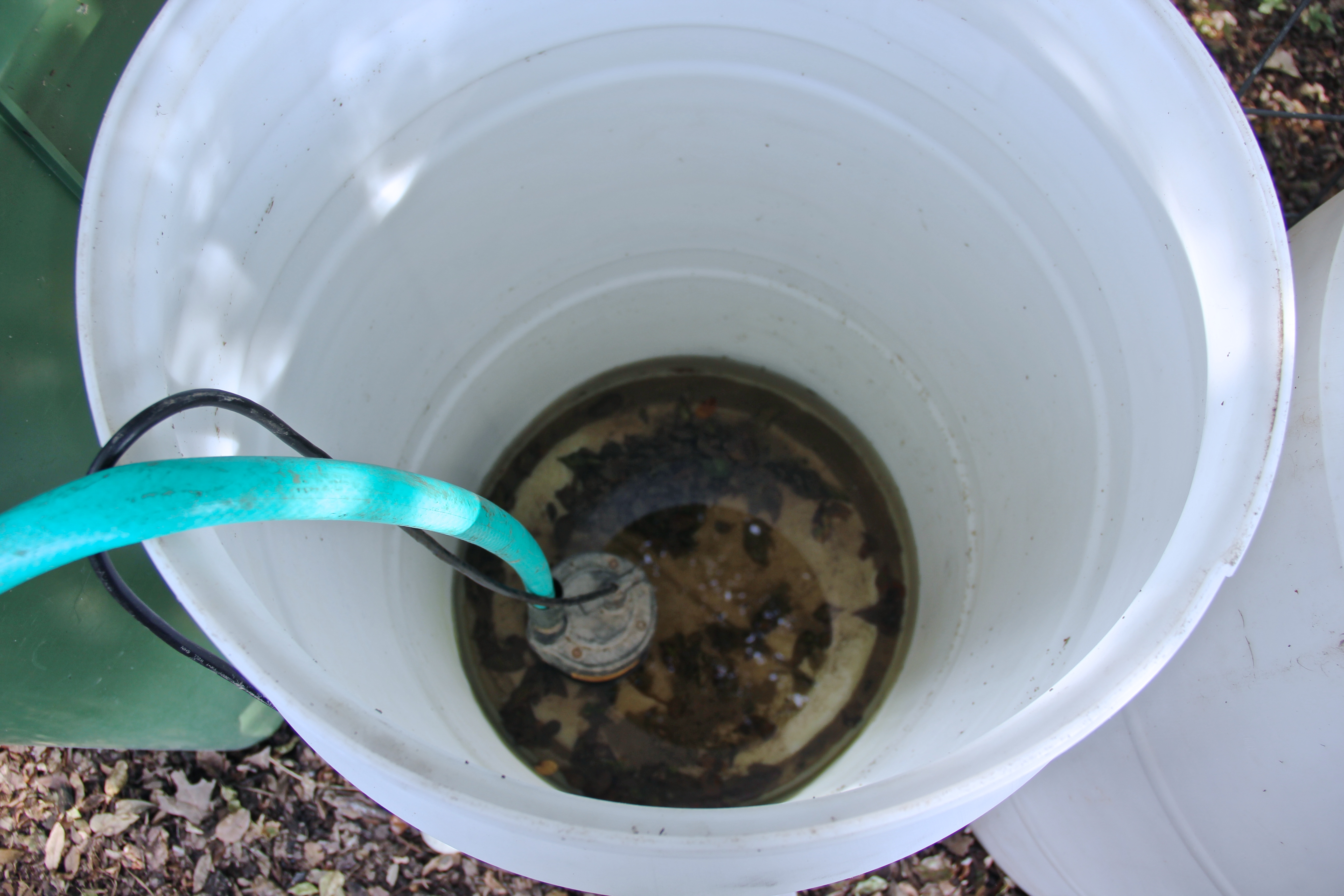 "We haven't had much rainfall recently so my water collecting containers are fairly empty," comments Elharam, 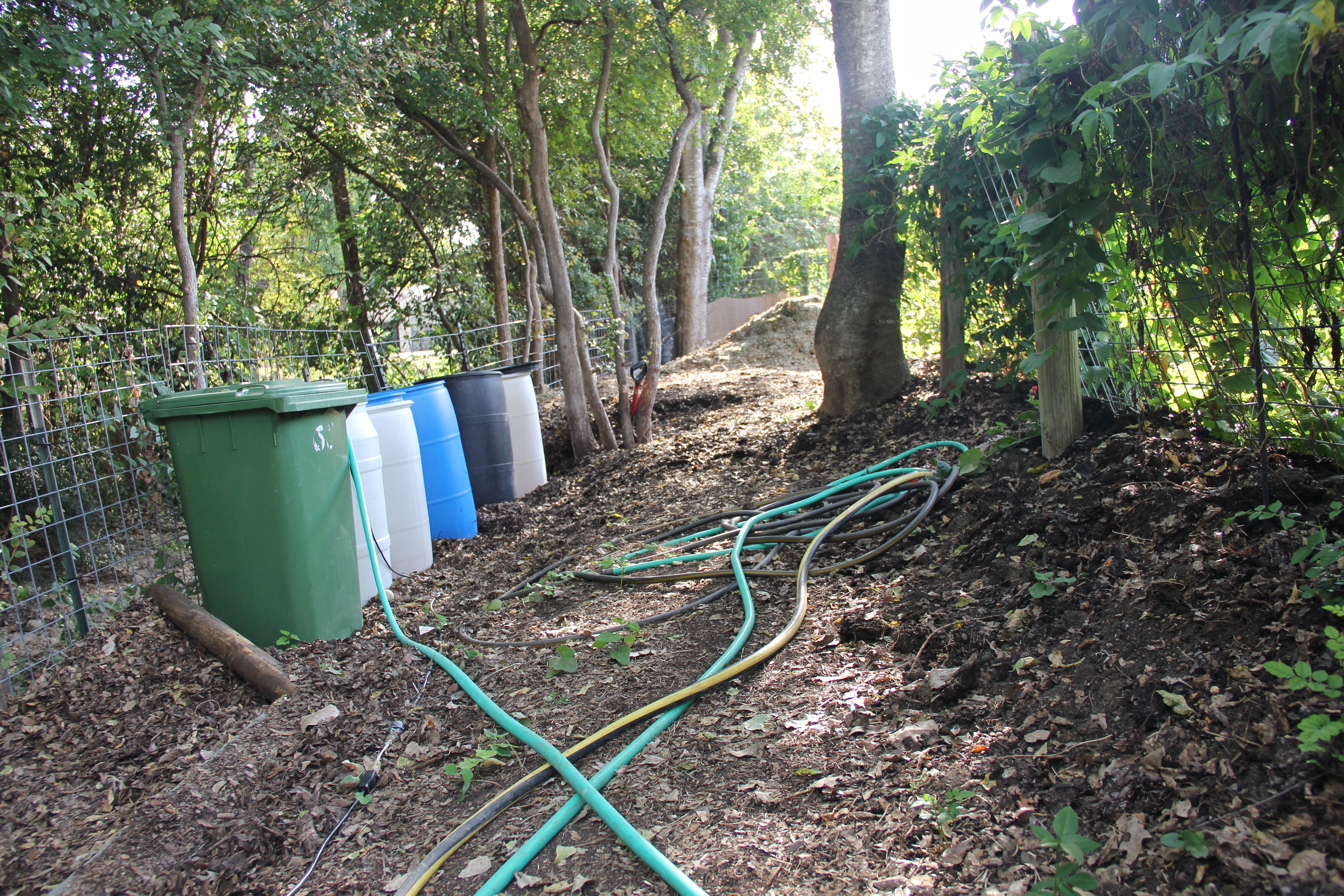 Elharam uses water from the creek in his backyard to water his plants. He has built his own water trapping system with a series of hoses and containers. Photo by: Erin MacInerney 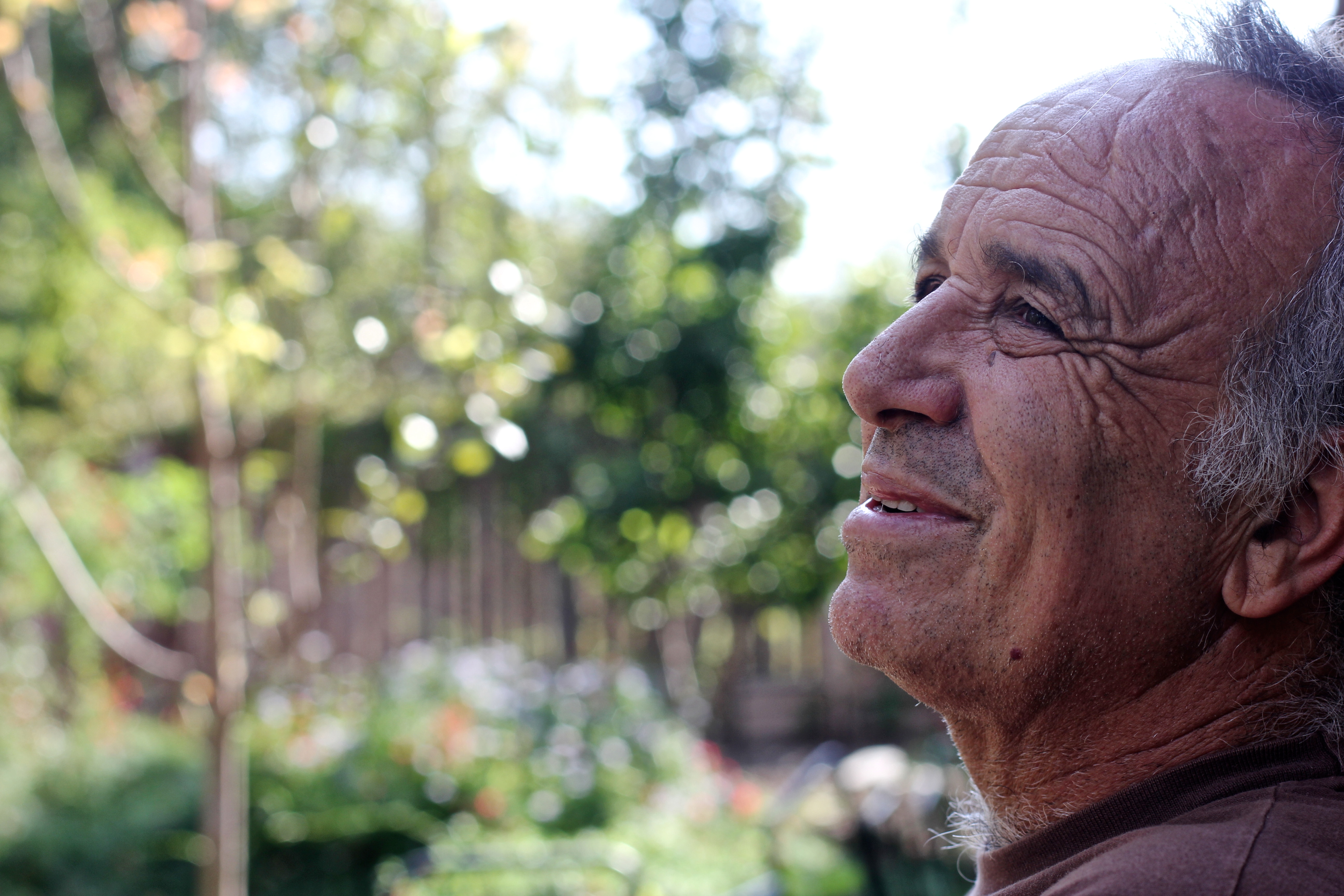 "I help my neighbors with anything they need, fixing lawnmowers, giving them compost and plants or anything really." "The peace corps was all about helping people, so that's what I like to do, help people," explains Elharam. Photo by: Morgan Bridges

For smaller restaurants or those short on space, Hoffman assures there are still ways to meet the requirements.

“There are small systems such as bokashi or wormbins that work well indoors and can take up as little as a square foot of floor or counter space,” says Hoffman. “Or, store those kitchen scraps in your freezer until you are ready to transfer to a compost spot.”

A food diversion plan for an Austin restaurant could also mean using organizations like Keep Austin Fed to meet their requirements. The local group picks up surplus food and distributes it to area charities.

“The City of Austin, may not be the first [to implement this ordinance],” says Hoffman. “But they are working hard to be a role model for all the other cities which will soon realize the importance of recovering organics as a resource instead of forever managing them as liability.”

What Goes Down Must Come Up